I recognized about mid-week that the upcoming cooling trend was a rare gift in the midst of Texas summer heat, offering a small window of opportunity to get my long overdue outdoor “fix.” I find myself missing the Georgia / North Carolina mountains more than I would have thought, as I spent almost every weekend camping or hiking in the cool pine forests along streams or beneath waterfalls, so moving to a climate where the outdoor temperature consistently exceeds that of my 98.6 body temperature has been a difficult adjustment. So the promise of highs in the low 90’s and a low of 68 was a much needed shot in the metaphorical arm of August. 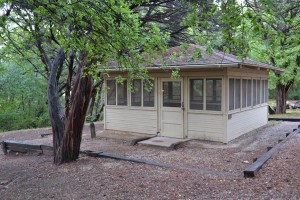 Rain was predicted for the weekend, but I wasn’t going to let that stop me.  However, I didn’t want to get too far from home in case it really was a freak forecast, I could still head home for the night should the oppressive heat return. Cleburne State Park with their screened-in shelters looked like the perfect respite.

I grew up picnicking at Cleburne State Park as a child, so it always seemed too “home town” to return in my teen years. However, after being away for 20 years, along with my renewed appreciation for the State Park system, I now see it in a new light. Just 10 miles outside of Cleburne in a densely wooded area full of cedar and other hardwoods, it surrounds the cool, relatively clear man-made, spring-fed Cedar Lake. 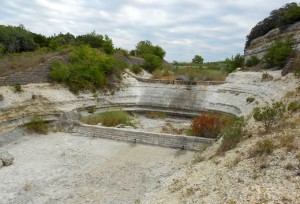 The park is one of the 29 state parks in Texas built by the Civilian Conservation Corps (CCC,) part of the “New Deal” program that created the first state parks in Texas following the Great Depression. It was built between 1935 and 1940 without the aid of much heavy machinery, mostly by hand and pick-axe. Many of the original structures built by the CCC have been preserved, the most impressive being the three-tiered masonry spillway behind the earthen dam.

Due to rain in the forecast, I had reserved one of the six screened shelters with water and electricity to avoid having to fold up a soggy wet tent come Sunday morning. However, when I arrived, I was told that the shelters were closed due to water maintenance. After much persuasion (See, Ranger, Sir…..I really NEED this weekend like you wouldn’t believe!!”) I was able to convince them that lack of running water would not present a problem for this prepared Girl Scout, and since their online reservation system had allowed me to confirm, they should allow me to stay. 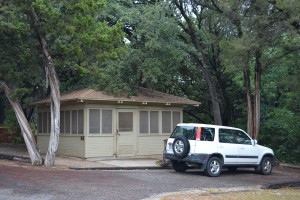 It took some persuading, but finally they agreed, offering my second gift of the weekend, the entire shelter section all to myself! It was peaceful, serene, quiet, and nothing short of bliss to lie on my air mattress, listening to the rain drops pelt the surrounding trees and roof, while keeping warm and dry under my fleece blanket. Yes, that’s right. A fleece blanket. In August.

I hiked most of the trails in the park. I would like to say they were “poorly marked,” but to be more accurate, they weren’t marked at all. As long as you keep either the lake or the park border fence in sight, you are fine. However, in the center of the park are quite a few mountain biking switchbacks that can become very confusing and disorienting. I rarely recall having to use a compass while hiking, but this was one time I was glad I had the forethought to throw it in the pack! Still the scenery of the lake and spillway made for rewarding hikes. 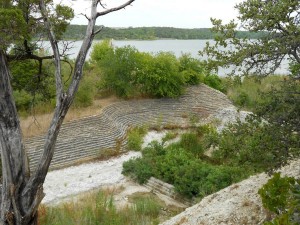 Wiew of the spillway from the “Spillway Trail.” 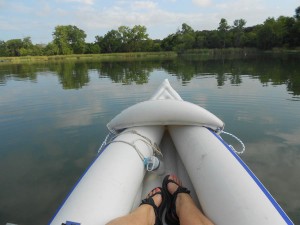 What a way to spend a Sunday morning!

My favorite activity in the park was kayaking the peaceful, calm “no wake” lake on Sunday morning. Nary a ripple on the surface made for a perfect paddle around the perimeter with my handy portable Sea Eagle 330 inflatable kayak. It even offered a little wildlife viewing with a couple of cranes in the reeds, and quite a few fish breaking the surface. 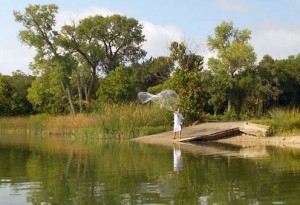 Many fish from the shore or their kayak

I had failed to tighten the cap on one of my pontoons, so I pulled over along the shore to add some air and cool off for a refreshing morning swim. It was here that Bill, the ex-Marine helicopter pilot, GI Joe / Ken Doll, also known as my “angel in a muscle suit” paddled over in his sleek yellow kayak to see if I needed some help. We shared a couple of laps around the lake, ergo my third “gift” for the weekend! 😉 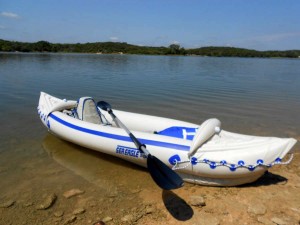 The only disappointing factor that I can find about Cleburne State Park is that the campsites are a little too close together for my taste. Although this is not the case with the screened shelters, it might prohibit me from pitching a tent here too often. Otherwise, it was a beautiful little oasis on….”That Sunday, That Summer.”   (Natalie Cole) 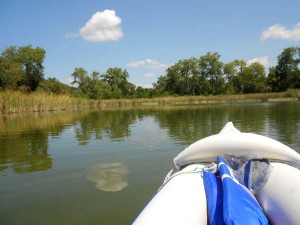 4 thoughts on “That Sunday That Summer…”