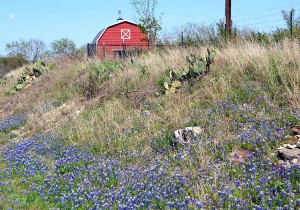 Anyone who traveled to the Texas Hill Country to see the annual bluebonnet bloom this year was no doubt sorely disappointed.   Oh, sure, there are a few rows of them lining the highways and entrances to the State Parks, but nothing like the endless fields of fragrant blue that we experienced last year.

The Park Ranger at the LBJ Ranch shored up his resolve as the Asian tourist asked forcefully, “We came all this way to see Texas Bluebonnets!   WHERE ARE BLUEBONNETS??”  To which he responded in a very dry, uniformed monotone, “We can’t control the drought, Ma’am.  When there are no showers, there are no flowers.”

I drove the Texas Hill Country Highway in hopes of seeing not only the bluebonnets, but also the gorgeous fields of red, yellow, orange, purple and white wildflowers that have made the Hill Country so famous.  But alas this is not the year.   I even went out of my way to find the road I had driven last year that was so spectacular, I thought surely someone must have seeded it.  This year?   Just an average Texas two lane.

Burnet, TX claims to be the “Bluebonnet Capital of Texas.”  They even had a bluebonnet festival taking place in the main square, complete with cloggers,  carnival rides, and all the “guilty pleasure” foods you associate with those carnival rides. 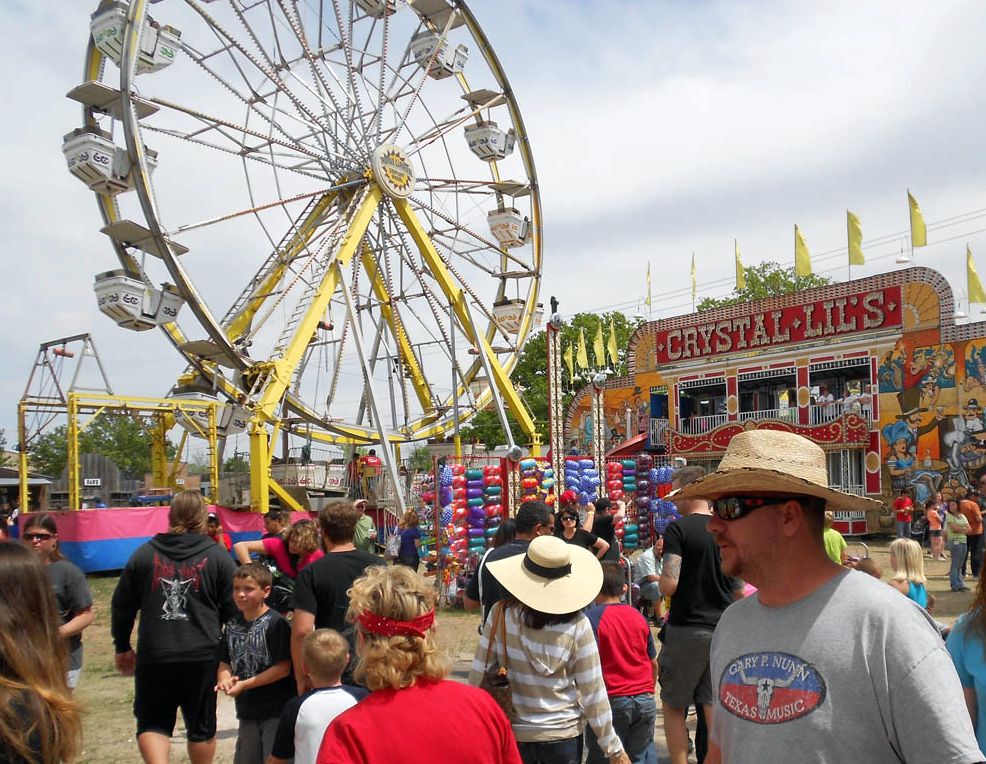 Turns out my brother’s best college friend owns this ice cream stand, and I had no idea! 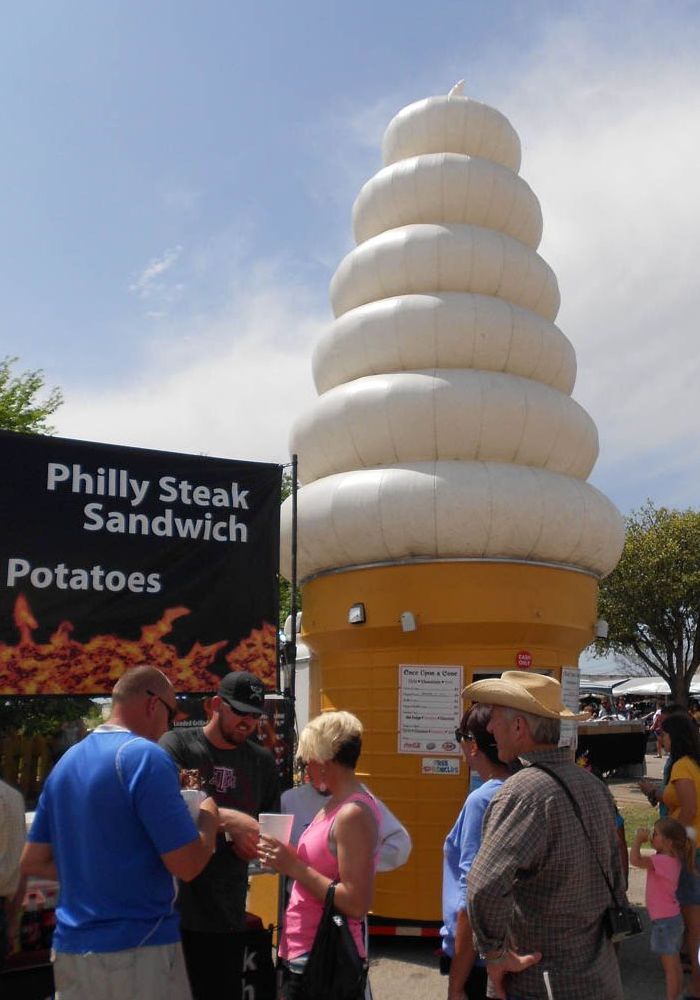 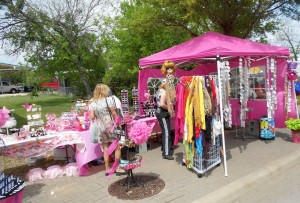 The majority of booths were selling all forms of Texas bling – hats, belts, boots and flip flops —  in keeping with the Texas motto, “There ain’t no such thang as too much blang!!”   But not even a seed packet of bluebonnets for sale.  Some metal “bluebonnet art” was as close as I got. 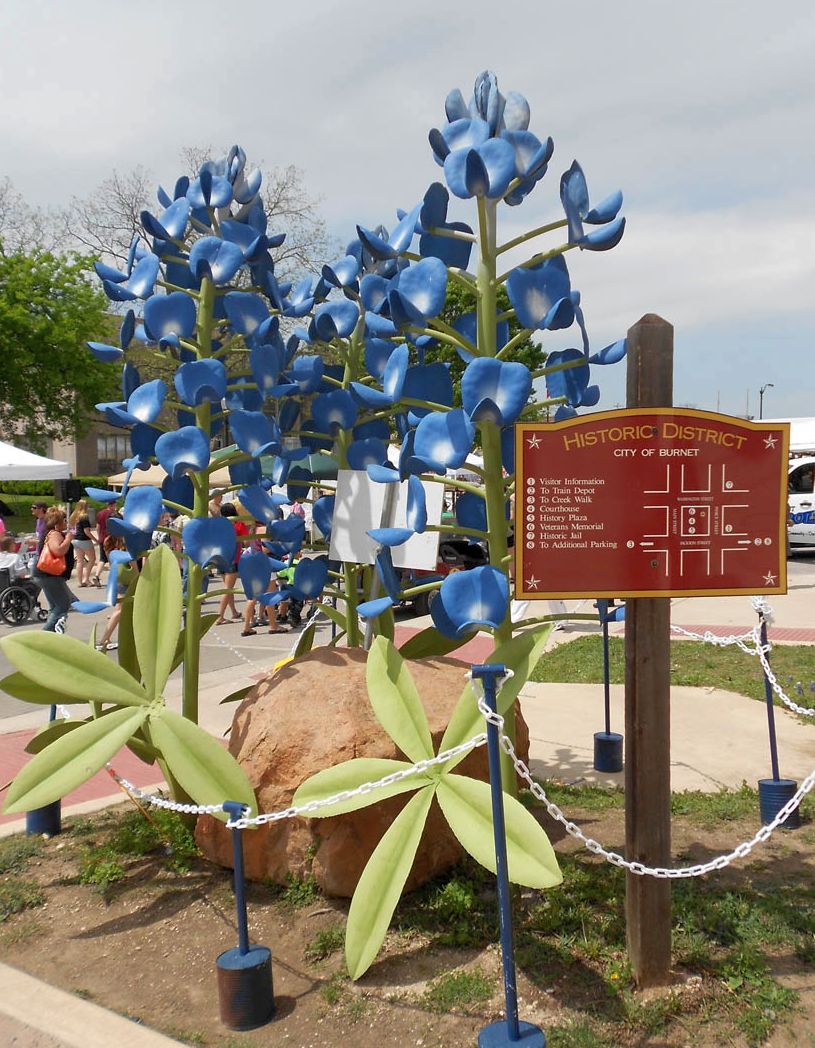 I ended up in Fredericksburg over Saturday night.  Saturday night during wildflower season in the Hill Country.  With no reservation.    My credo has always been “Things always work out for me,” so I have been known to show up without reservations more often than with, and always had really good luck getting that “last single room by the elevator.”   But it would appear my lucky streak didn’t just end with wildflowers.

After the third stop, I asked the lady behind the front desk if she had any suggestions….short of driving to San Antonio.    Her only suggestions were the budget places I had already tried.   So I asked, “Are there any State Parks nearby?”   Being the “accidental girl scout” that I am, I actually had all my camping gear in the car in prep for my upcoming visit to Enchanted Rock.  She said, “No State Parks, but there is the Lady Bird Municipal Park.  Lots of people camp there!” so off I went, and darned glad to get it!

The “Tent City” seemed kinda creepy at first, but there were plenty of nice RV rigs across the road, and we all know RVers are nice, right?   The man in the office said there was 24 hour security, so I just pitched the tent by the driver’s side and slept with the car key in my pocket all night.

I have to admit, though, Fredericksburg was not really “my thing.”  (Sorry, Mark!)   I am glad I went, but I don’t have the desire to go again, ergo my sad lack of photographs from there.   Although I did enjoy my German dinner at the Der Lindenbaum, and breakfast of apple strudel from the Old German Bakery the following morning.  The rest of it was too much Texas “boots, brag, and bravado” for my taste.   Even though I am a “Native Texan,” I just never have felt like it.  I don’t own a pair of boots or one of those crinkly cowboy hats made to look 50 years old when it is not.  I don’t do line dances.  And I don’t wear bling.  I relate more to Kermit the Frog here…

“It’s not easy being green
It seems you blend in with so many other ordinary things
And people tend to pass you over
‘Cause you’re not standing out
Like flashy bling sparkling in the water
Or Lone Star belt buckles shining in the sky.”

If you are a “Harley Babe,” though, this is your tribe!  Forget the bling!  I have never seen so many orange bandanas and tight black leather in my life!   As the little lady standing next to me in the line to get inside the Old German Bakery said “I never saw so many Harley Davidson walking billboards before!”

I took a trip out to the LBJ Ranch, thinking surely with Lady Bird being famous for her wildflowers, there would be fields of them there.  Though I did find it odd that the Pedernales River running right in front of the ranch appears to be the only part of the entire river with any water, there were still no wildflowers. 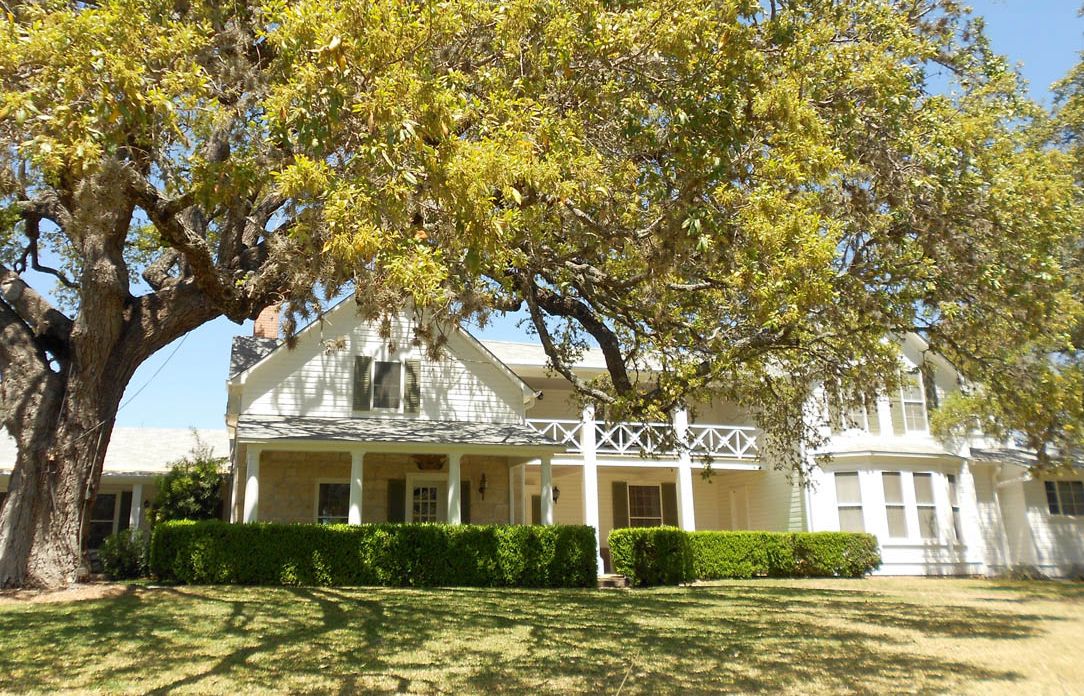 I did enjoy touring the ranch, thinking back over LBJ’s political career which played such a prevalent role in my “formative years.”  From receiving the news from my Fourth Grade teacher of the tragic way he was about to assume the Presidential role, to the tragic way he exited it – announcing he would not seek a second term due to the ravages of a senseless, seemingly endless war. 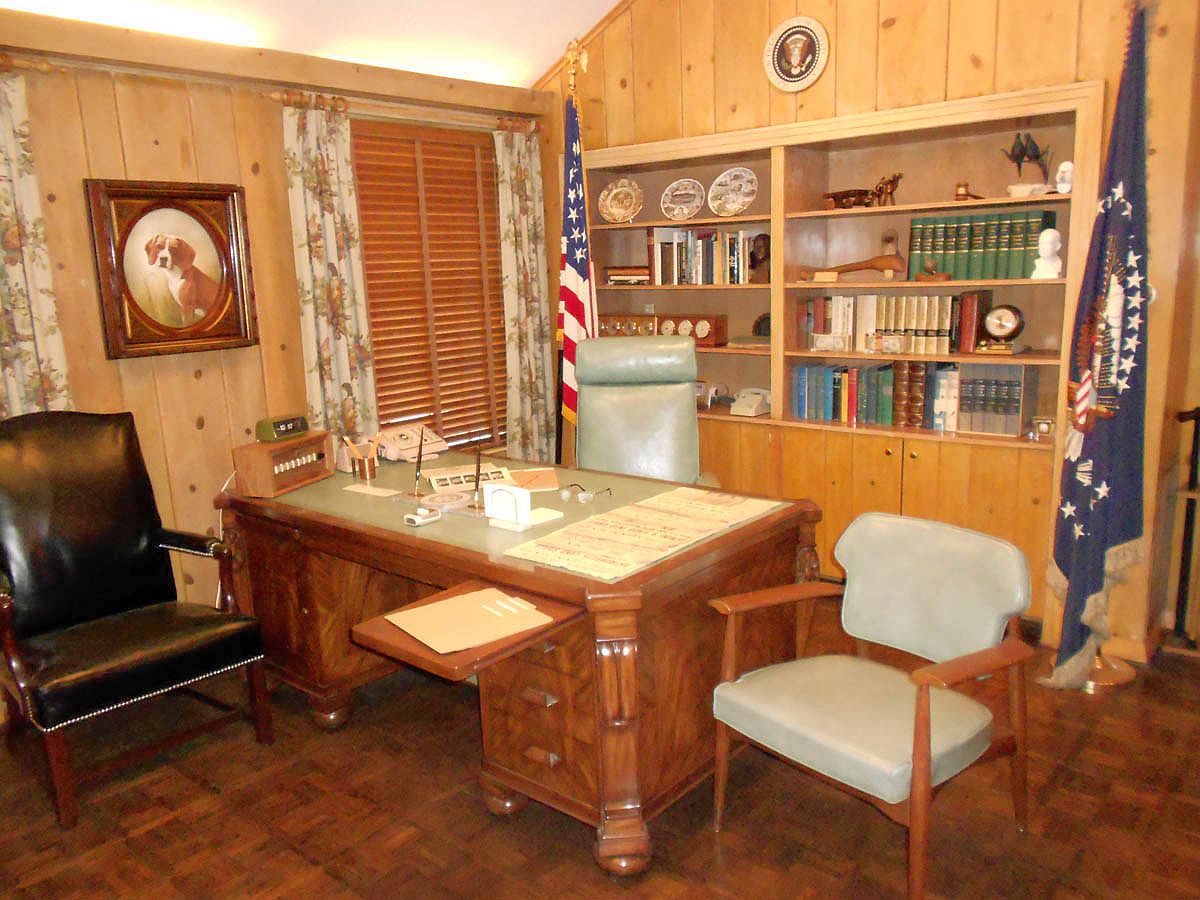 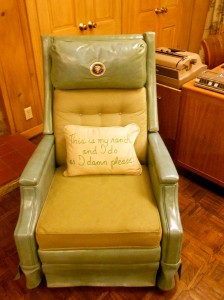 Texan, through and through!

It is interesting to read about the accomplishments he made in other areas such as education, Medicare, Medicaid, the Civil Rights Act of 1964 and 1968 and the Voting Rights Act of 1965, yet like so many, the only thing I remember is the news of how many were killed during the war that day, streaming through our only black and white TV set.

LBJ spent 25% of his time in office presiding from the ranch.  The press even dubbed it the “Texas White House.”   They built an air strip, generators, massive communication tower, and guest houses for the Secret Service to enable him to officiate from the ranch. 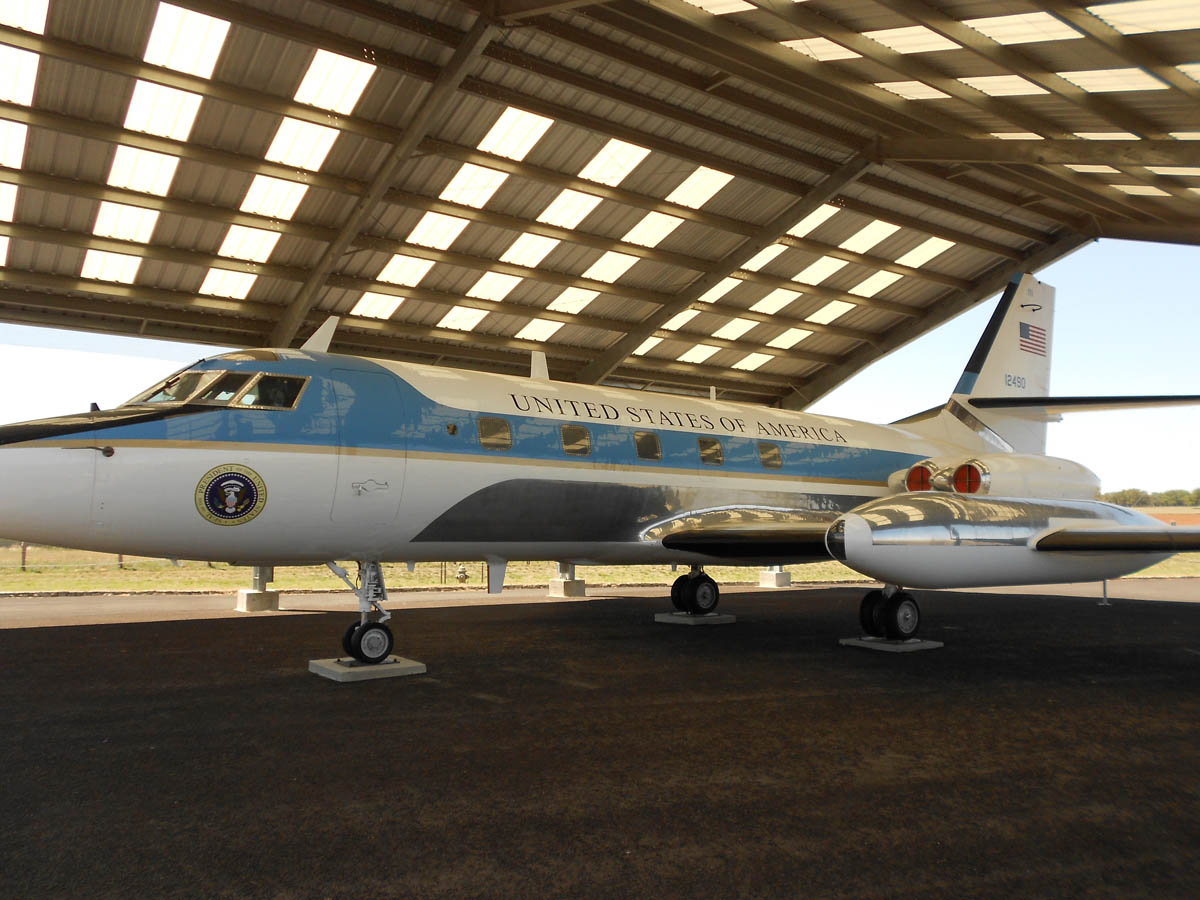 But only remembering the serious side of LBJ, I found it most interesting to read about his more “playful” side, like his amphibious vehicles that he used to enjoy driving off into the water at the surprise of his guests. 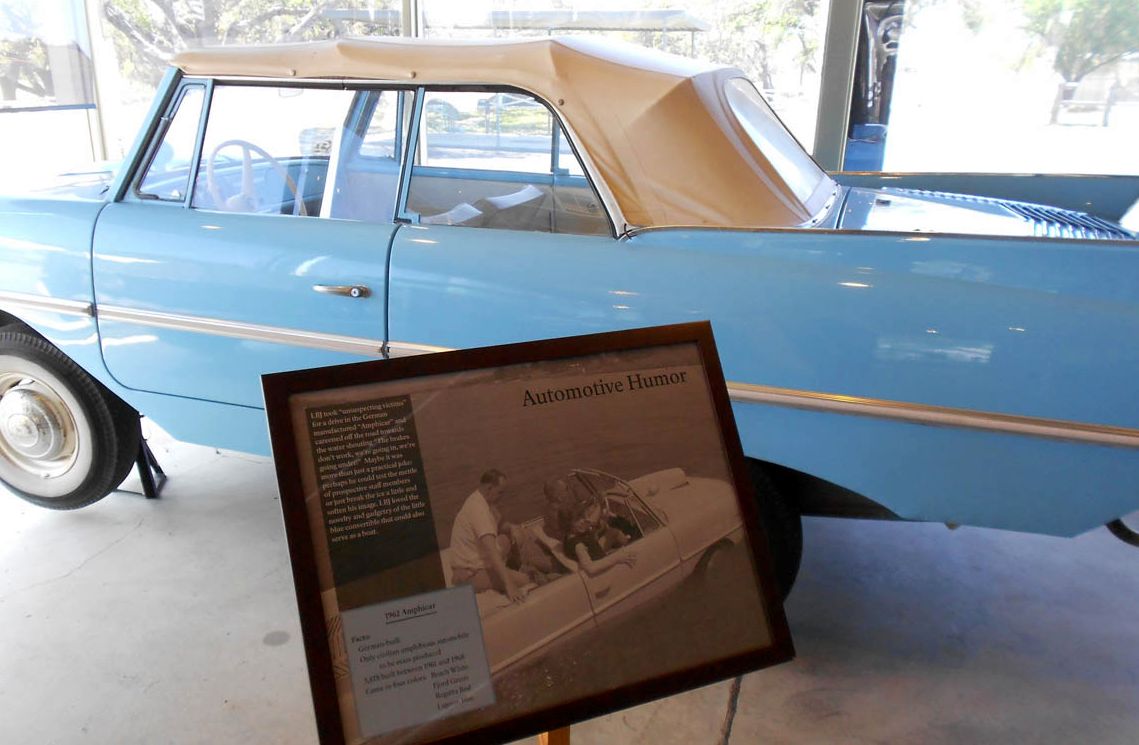 He and Lady Bird are buried there at the ranch under the shady pecan grove overlooking the Pedernales — just about 100 yards from his birthplace, making the circle complete. 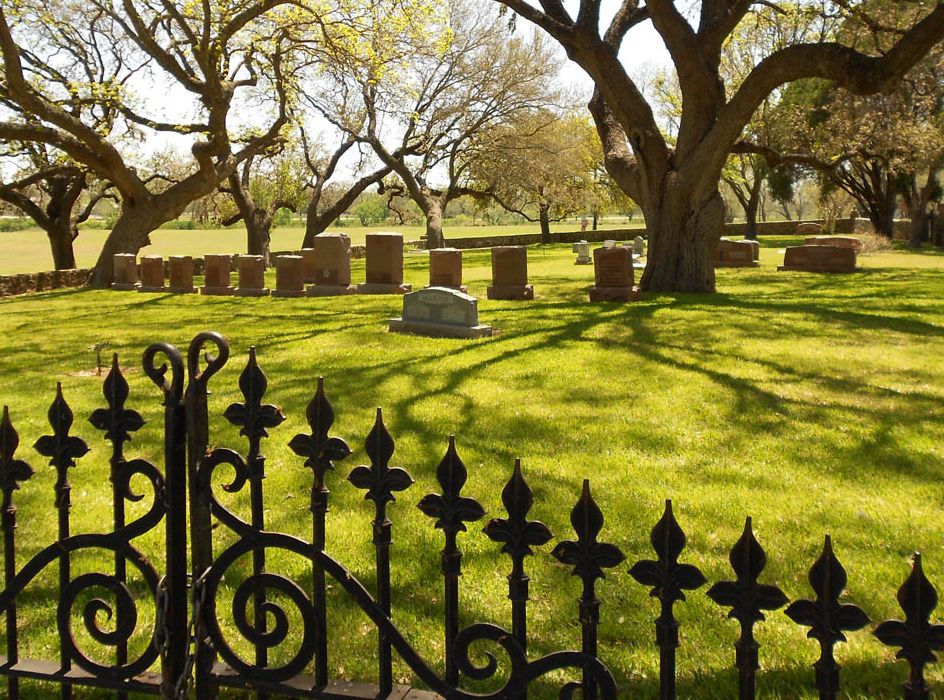 Ironically enough, I did eventually find some bluebonnets on the way back to Austin in near darkness.  They were along the major highway that I had avoided in hopes of seeing wildflowers along the country roads.