Those are the words that Stephen Bishop, one of Mammoth Cave’s best known African-American slave guides and explorers, used to describe the massive cave system located in central Kentucky.

Mammoth Cave is the world’s longest cave system with over 400 miles of surveyed passages, with exploration still underway.  Along with Niagara Falls, it is one of America’s oldest tourist attractions, with tours dating back to 1816.  It became a National Park in 1941 and a World Heritage Site in 1981. 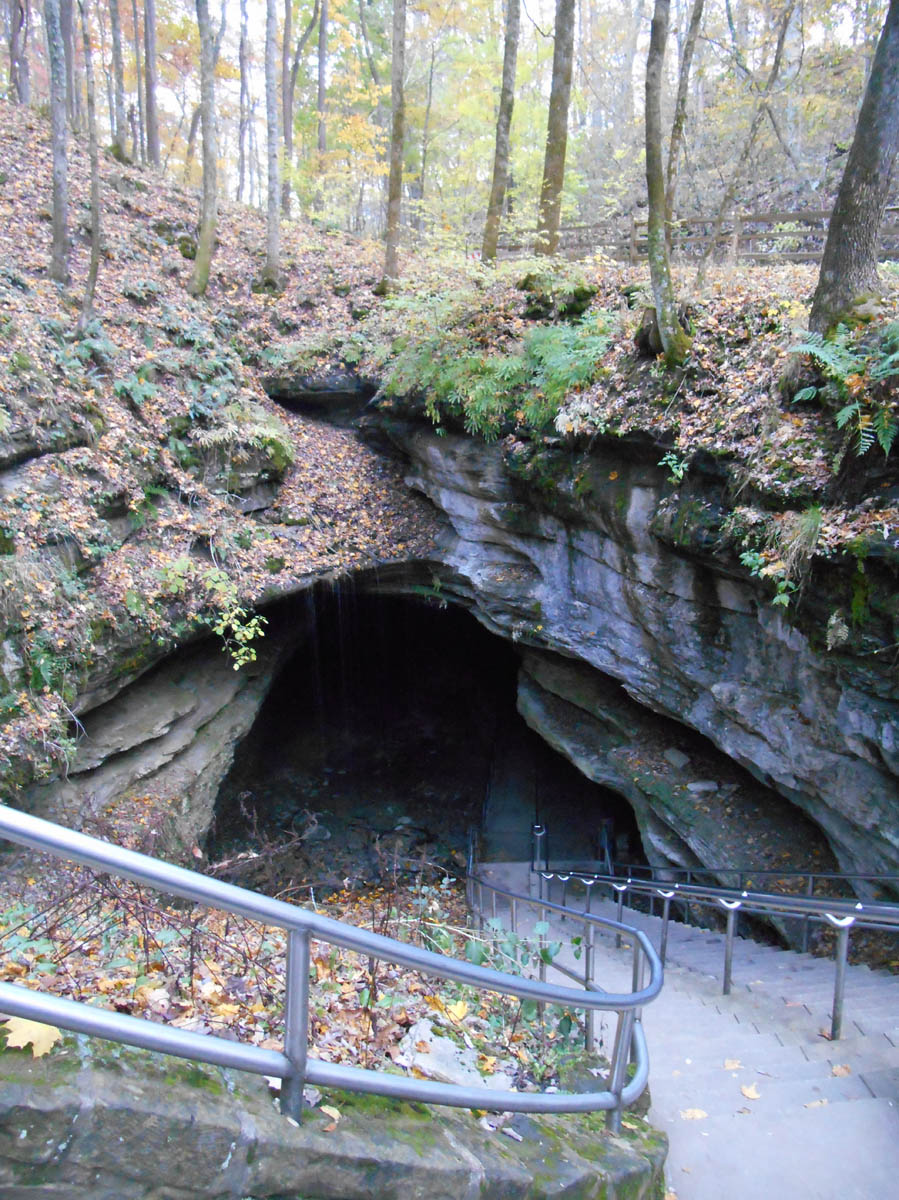 I didn’t realize what a “cave obsession” I apparently have, until I kept booking one tour after another, and still could do even more.  Back in the late 90’s, I explored miles of passage in the world’s second-longest cave system, Mexico’s Sac Actun underwater cave.  But I attributed my attraction to SCUBA diving, not the cave itself.    Floating in gin-clear water-filled rooms with four walls, a ceiling and a floor offers “spacial-referencing” not found in traditional open-water diving, thereby creating the “illusion” of flying.   To soar through the gigantic rooms filled with thousands of stalactites and stalagmites ranging in size from a soda straw, all the way up to 40 ft “tree trunks,” then look over to see one’s shadow on the wall like that of a giant dragonfly was an addictive illusion that I have tried not to forget.   So with my feet now firmly planted on the ground, could I still experience the same illusion?  With each dark, shadowy passage, I was pleased that the memories of the thrilling sensation returned.

With no tripods, backpacks, camera cases, or flash photography allowed in the cave, my photos are not exactly “suitable for framing,” but I did the best I could to capture the memories.  My alternative would be to use some stock photos from Google Images, but then that would not be seeing the cave “through my eyes.”   Since I believe our photography should be an extension of our own eyes and soul, I am using my own photos here, in spite of the blurred, grainy images. 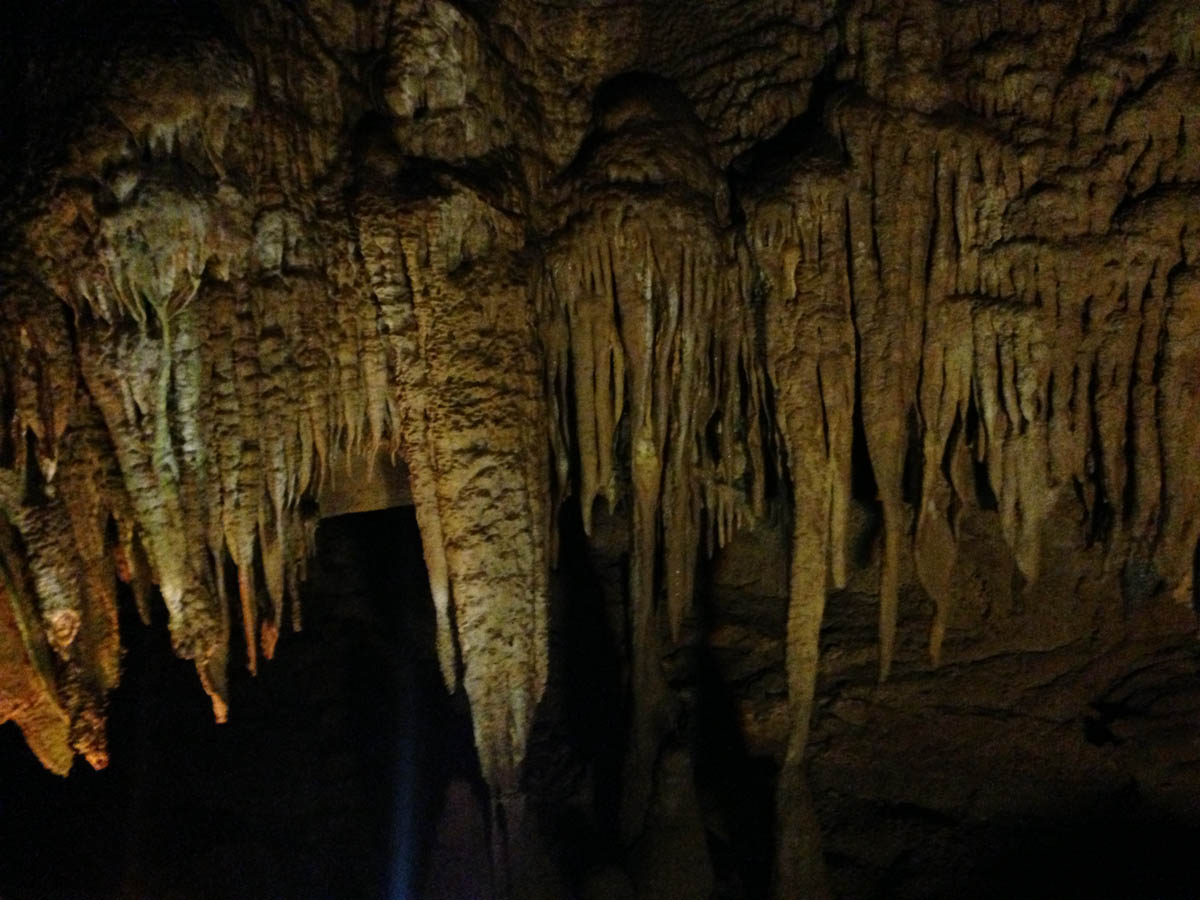 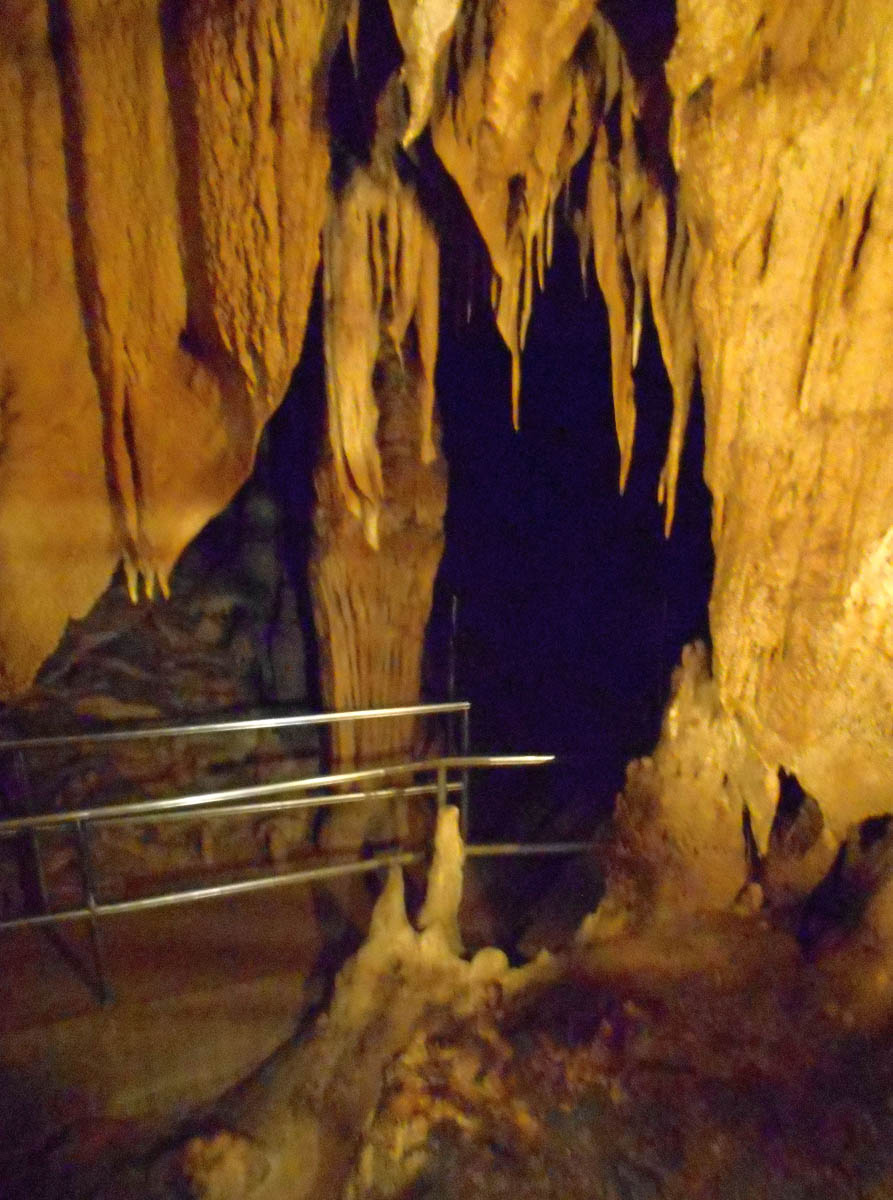 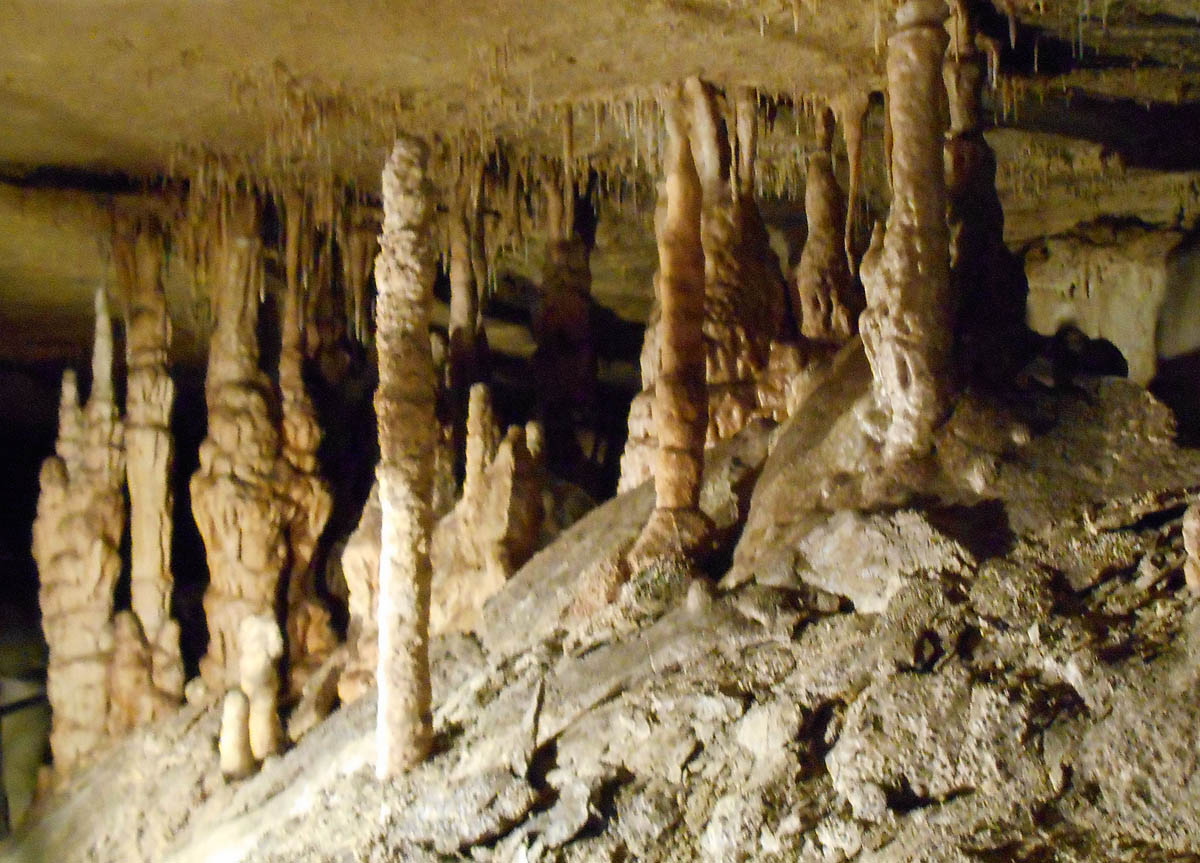 Here is a description of each of the four tours I chose, one lighted, with the other three lit by lantern:

There are 26 entrances to the Mammoth Cave system, only seven of which are natural, the remaining being man-made.   This “new” entrance was not opened up until 1921, during the Kentucky Cave Wars, when land owners blasted and drilled in hopes of sharing the wealth of the tourist dollar.  We entered through the “New Entrance,” and exited out the “Frozen Niagara” entrance, passing through three major geographical changes, the first being high domes and bottomless pits, the middle being a broad, low-ceiling, dry passage with massive boulders, and the third being the most decorated section of the cave system, “Frozen Niagara.”    This was the only “electrically lighted tour” I took. 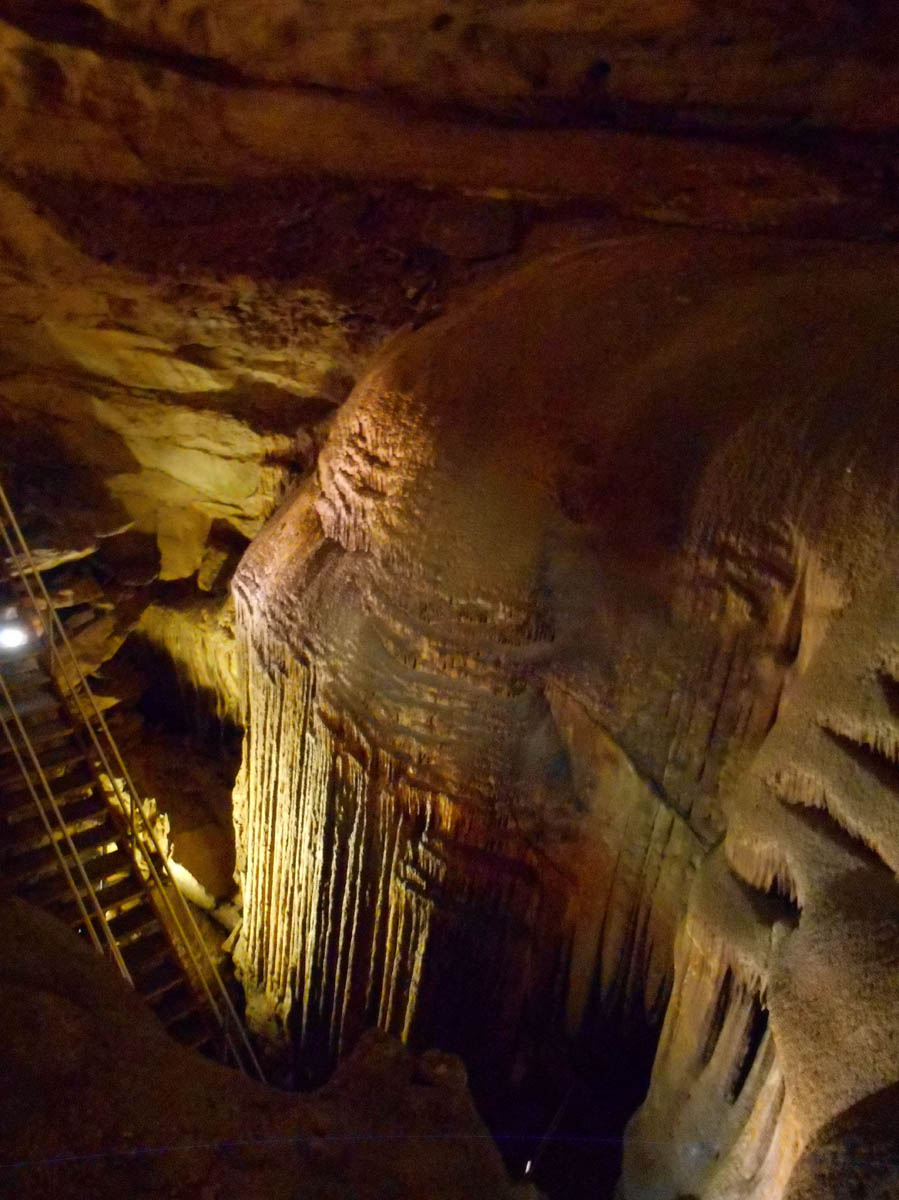 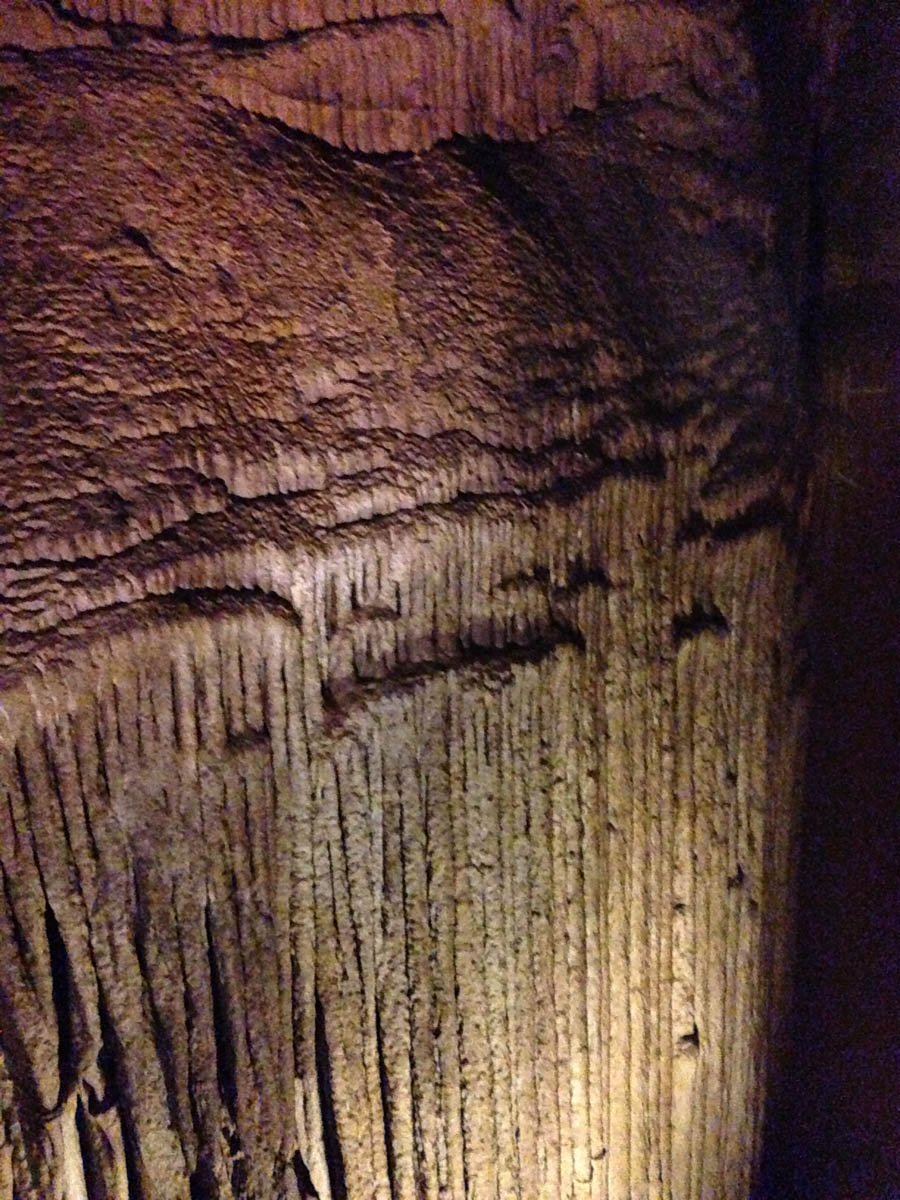 One out of every 4 or 5 people on this tour was handed an old-fashioned “Dietz” oil lantern as the only lighting source, to recreate the experience of the early visitors to the cave back in the 1800’s.  Along the tour were landmarks of an original saltpeter mine (used for gun powder production,) underground tuberculosis “hospital,” and cane torches and ladders carbon-dated back thousands of years.   Considered one of the longer, more “strenuous” tours offered by the NPS, the challenging aspect was knowing it would be three hours before I could use the restroom again. 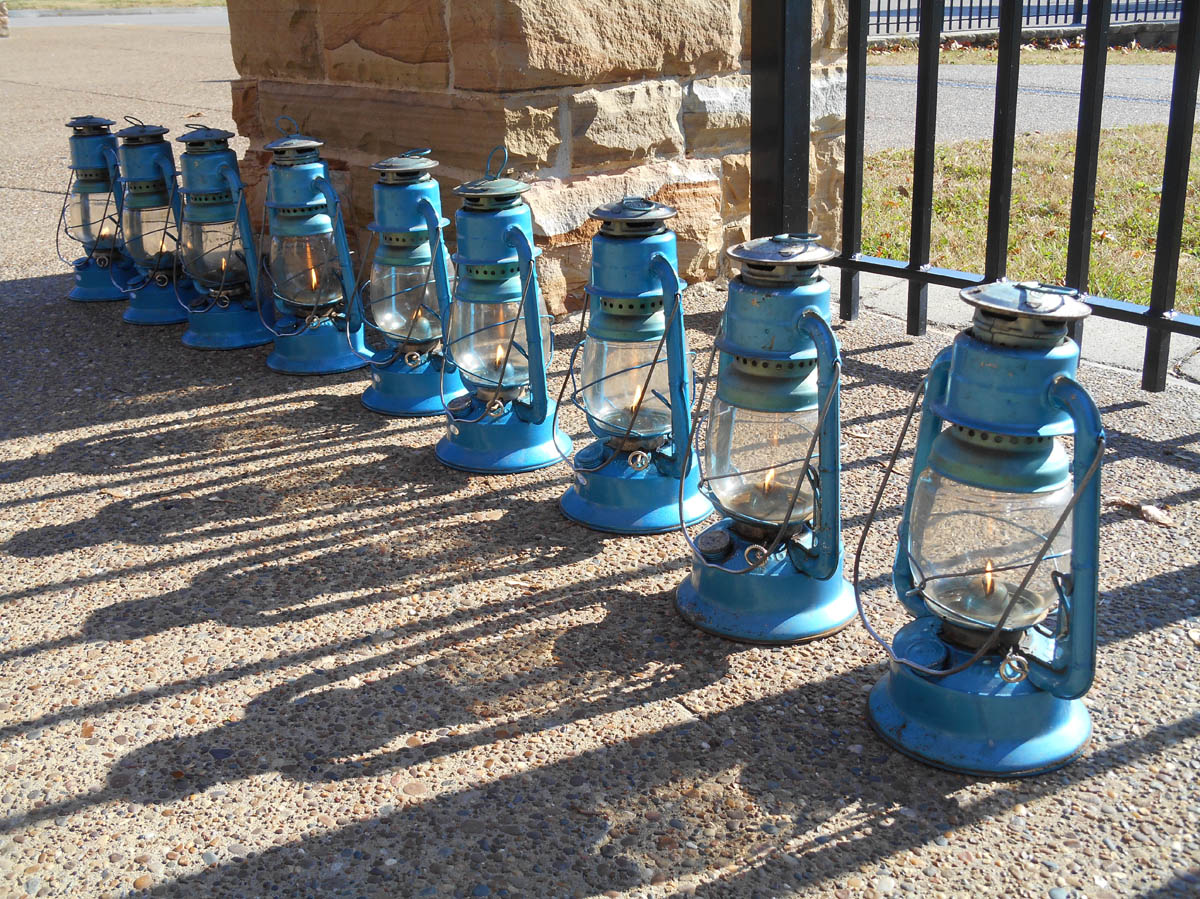 This 3 mile cave is a different cave system altogether, and as of now, not believed to be connected to Mammoth Cave.    This tour was guided with Coleman lanterns, because the cave only became part of the NPS in 1961, and no electrical lighting system was installed.  The cave is best known for its dripstone gypsum which looks like delicate flower formations on the ceiling, and “helictites,” twisted or curved stalactites that appear to defy gravity. 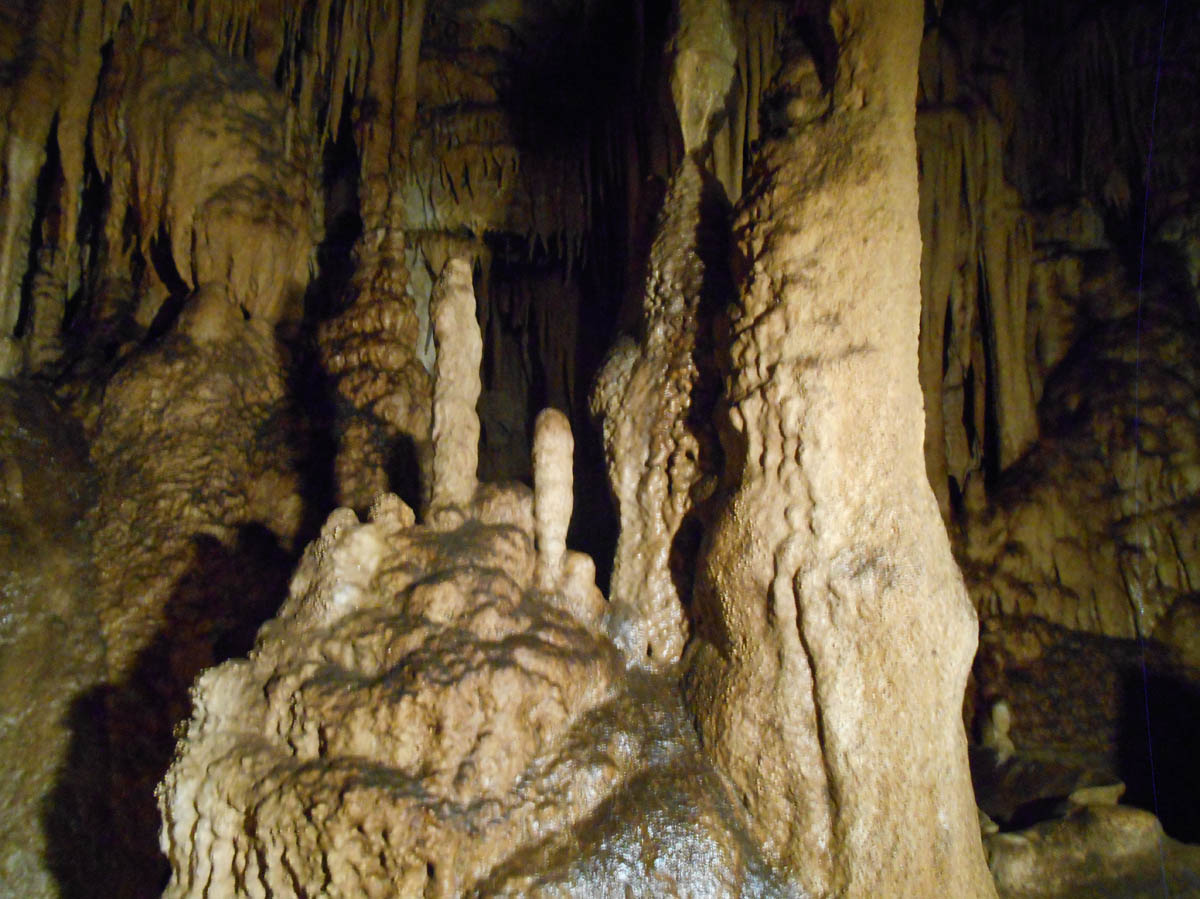 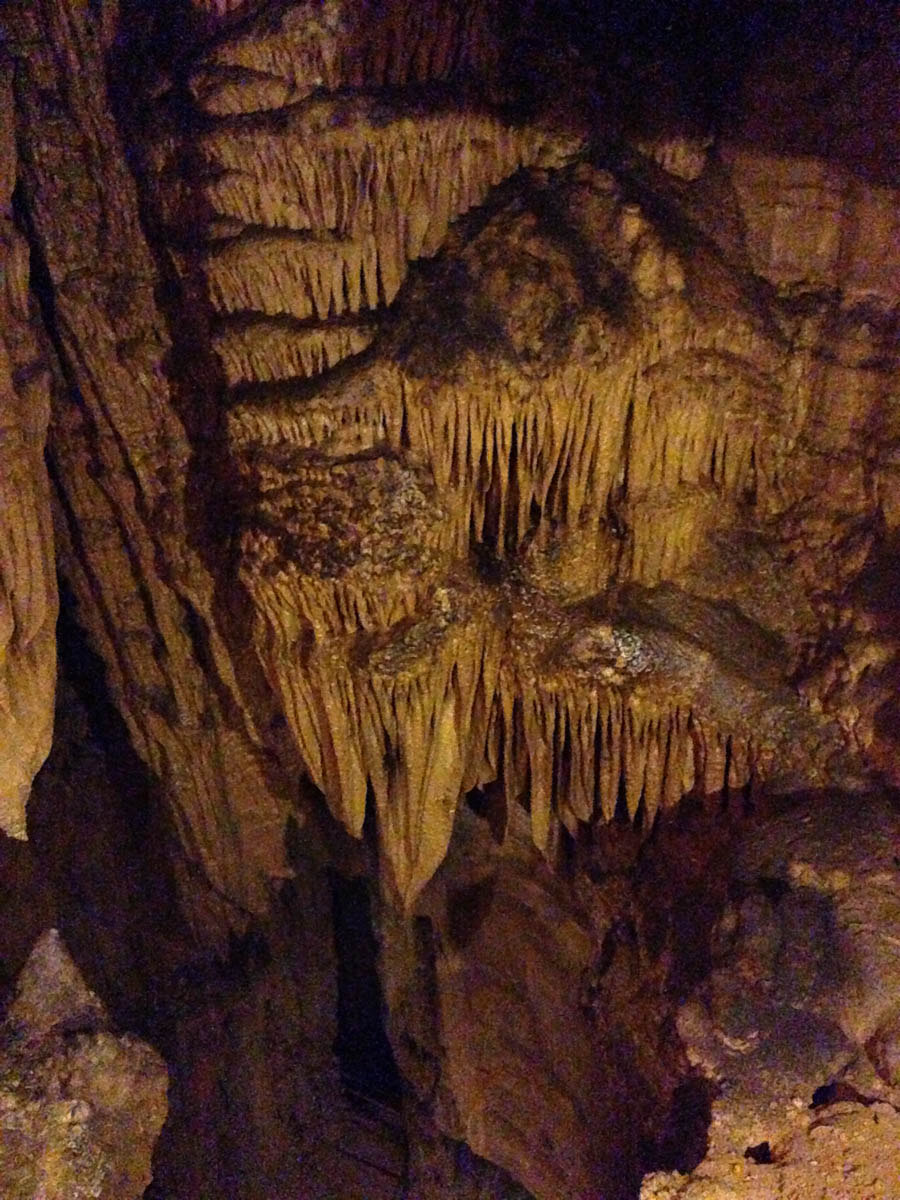 This was my favorite tour of all.  It was the last departure of the day, 5:00pm which is already dark on the far eastern edge of the Central Time zone.    We entered with oil lanterns through the pitch-dark main entrance of the cave.  The Star Chamber was about a mile back into the cave.  The room was dimly lit by the glow of the lanterns like a campfire.  A row of primitive benches lined the pathway so one could sit and lean back to look up.   The sides of the cave passage were gray, rugged stone along the vertical edges, but once they reached the ceiling, there was a distinct line of delineation on both sides of the cave passage where the gray stone turned into a sooty-black ceiling from 4,000 years of burning torches.  The walls were perfectly lined up on both sides to give the “illusion” of being in a canyon, looking up beyond the canyon walls at the night sky.      Then, the guide shined a small flashlight on the black ceiling to reveal tiny dots of white gypsum growing through the black soot……the illusion of a beautiful star-filled sky. 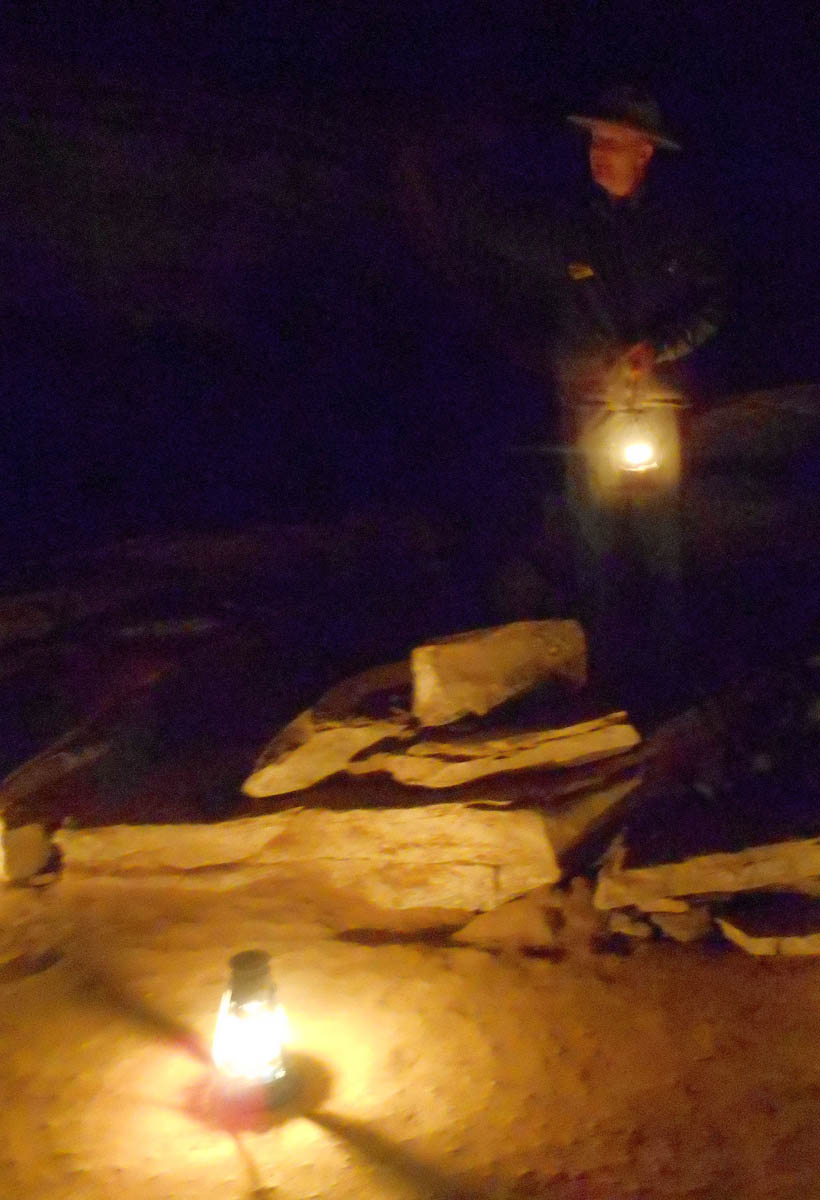 Blurry shot of Ranger Eric, who was a fantastic story teller!

Ralph Waldo Emerson visited the Star Chamber in 1857, and wrote about his experience, the basis which became his essay on “Illusions” as part of his book, “Conduct of Life,” in which he said, “We see God face to face every hour, and know the savor of Nature.”

As we exited the cave, my eyes now adjusted to two hours of darkness, the first thing I saw was the brilliant, dark star-filled sky beyond the rugged cave walls, so bright it almost appeared as an illusion in of itself.  This made me contemplate Emerson’s “Illusions,” and whether one was more beautiful than the other – the illusion in the Star  Chamber versus the real thing.   Both were equally mesmerizing. 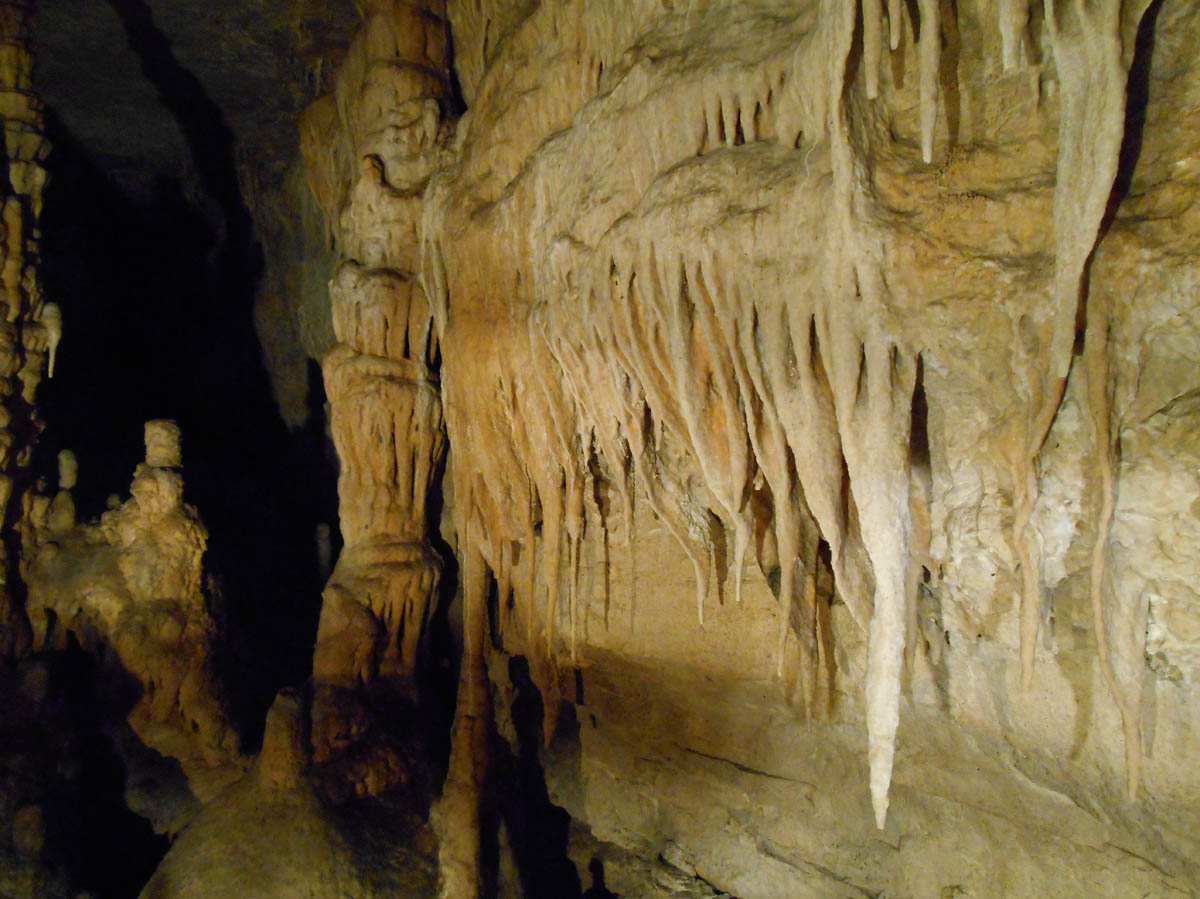 At the end of each tour, all participants were required to walk on “bio-security mats” in attempt to slow the spread of White Nose Symptom, a fungal disease effecting the bat population.  There are eight different species of bats in Mammoth Cave, so they are vigilant about prevention.   After four tours of walking through Woolite, my hiking boots are now “delicately fresh.” 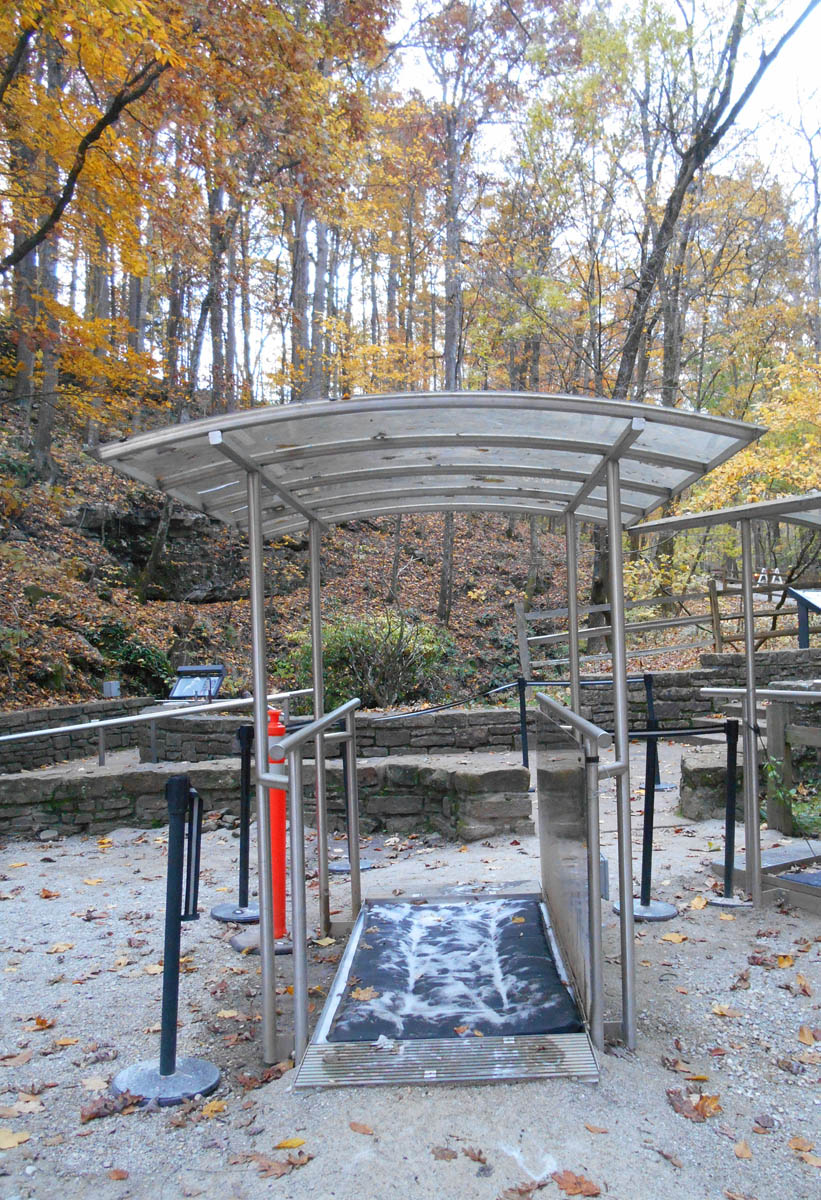 I was also impressed with Mammoth Cave National Park’s initiative for alternative fuel vehicles.  All the busses to and from the cave entrances are fueled by propane.  The NPS vehicles are all electric.  And the parking lot has up-front reserved parking spaces for “Alternative Fueled Vehicles.” 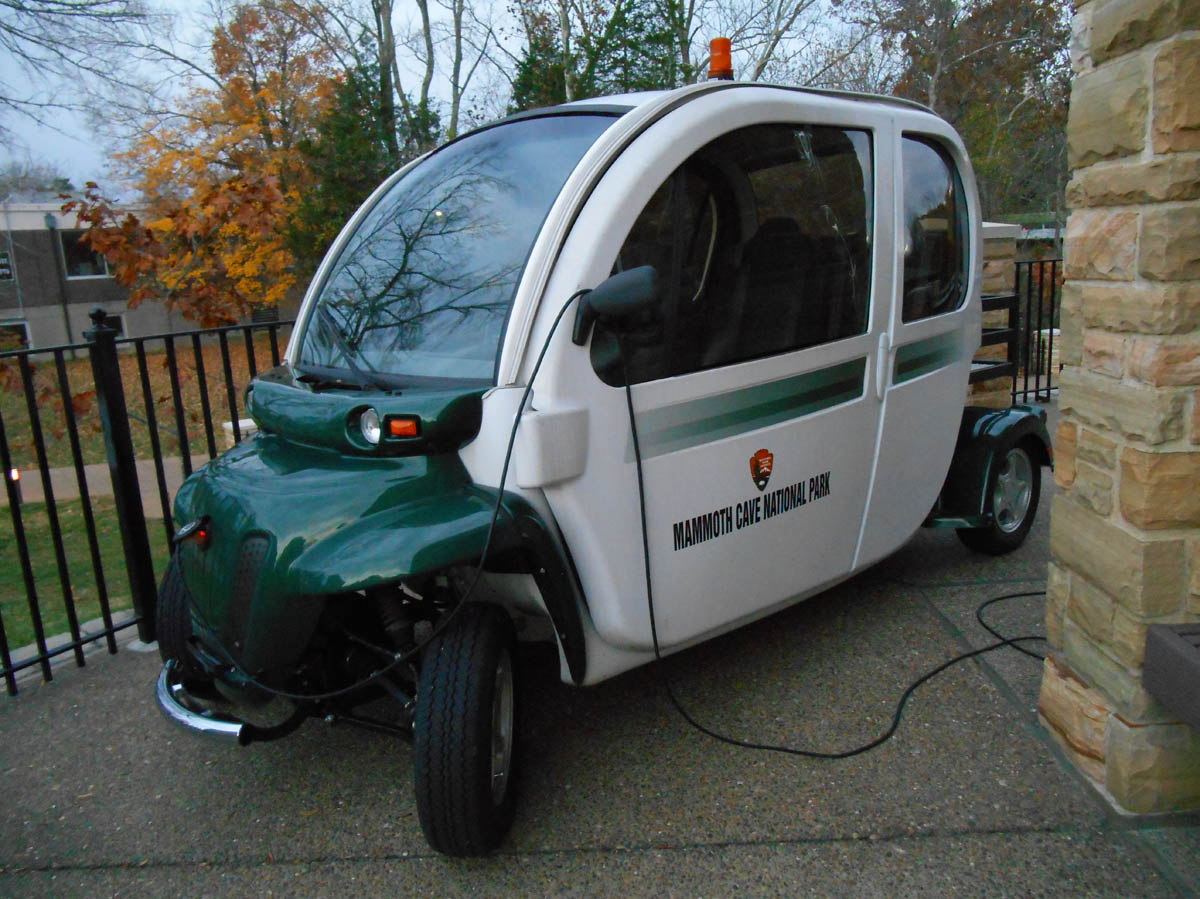 I must admit, I came to Mammoth Cave National Park to “tag” another one of the National Parks off my bucket list.    Instead, I was lured back into the cave over and over again by that sense of childhood wonder and discovery by exploration that pulls the life-force through us with our desire to see what lies just around the corner, down the next dark passage…  I hope in 10 years, I can come back to this post and still sense the thrill of the “illusions.”

“One of the illusions of life is that the present hour is not the critical, decisive hour. Write it on your heart that every day is the best day in the year.” ~ Ralph Waldo Emerson 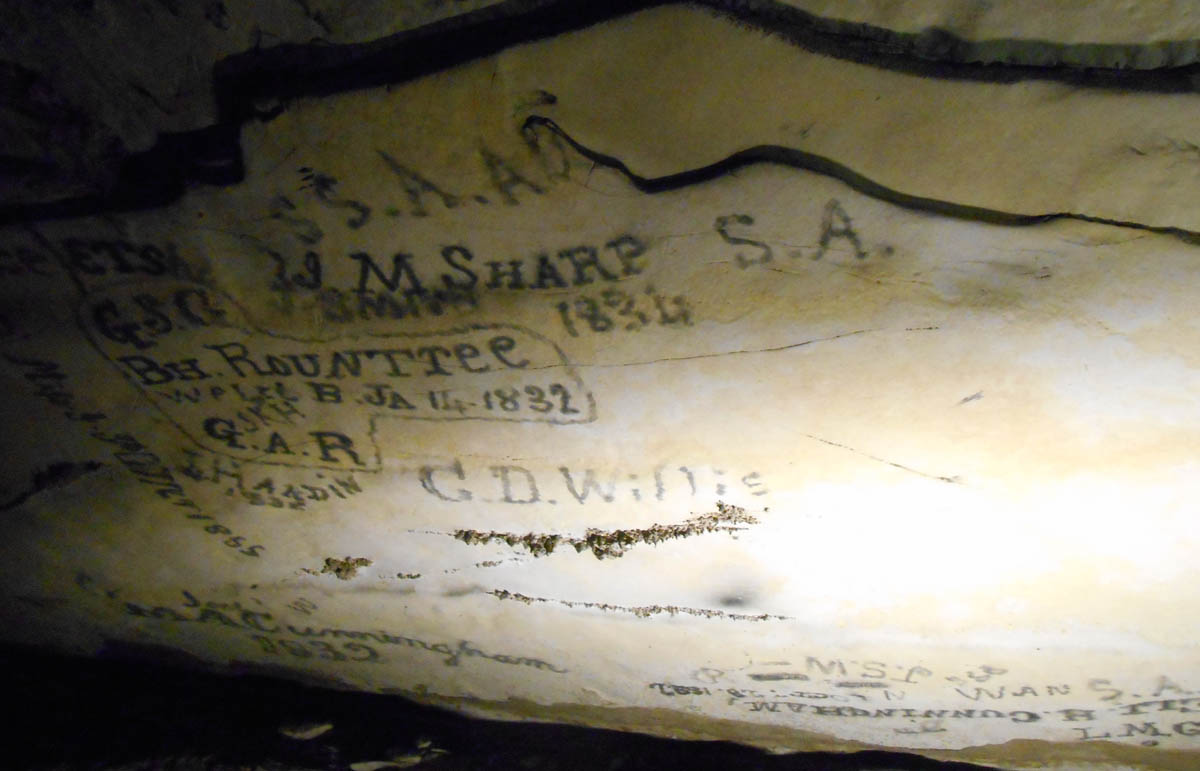 “Candle-writing” on the ceiling from the early 1800’s 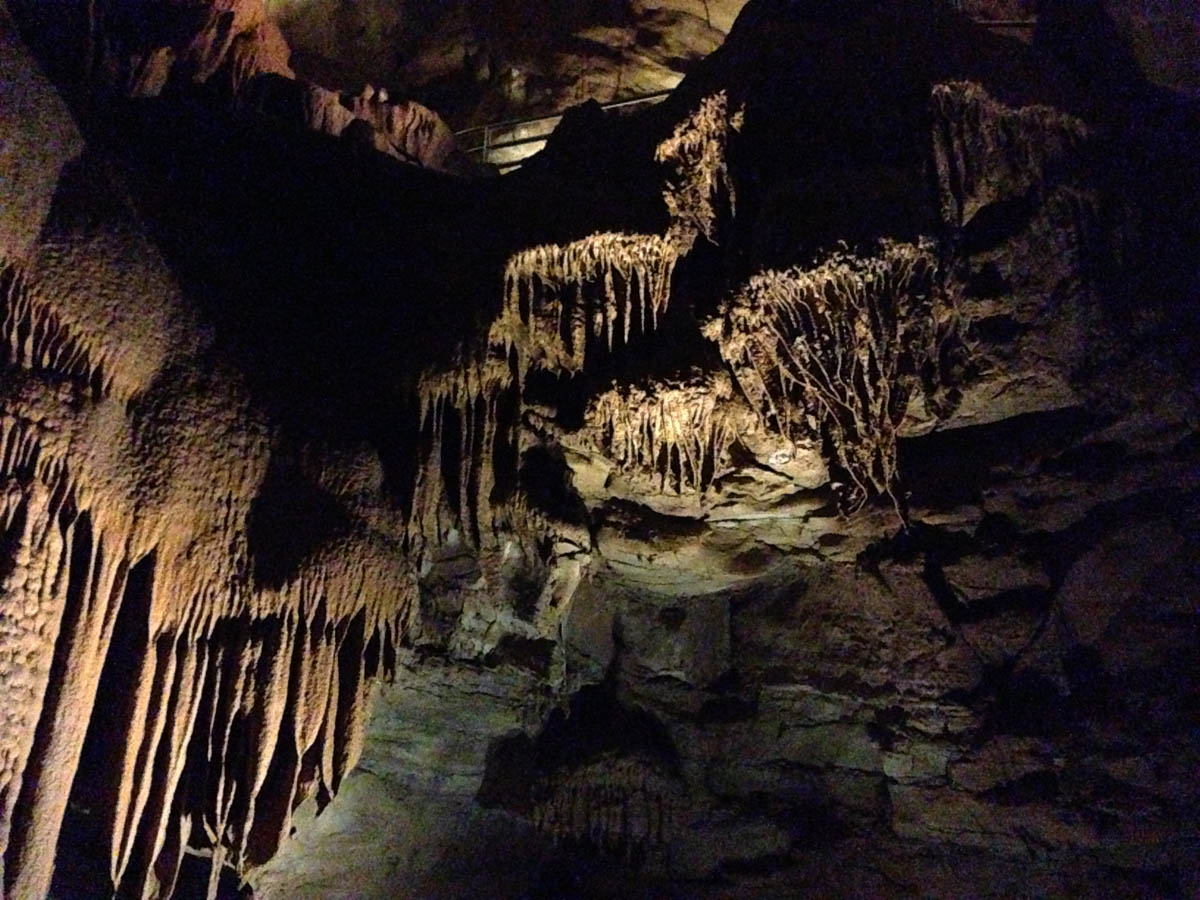 4 thoughts on “A Grand, Gloomy, and Peculiar Place…”