For all the massive crowds I saw on Skyline drive during the peak of leaf peeping season, there were none on the hiking trails, thank goodness.   Oh, I saw a few families along the trail, but very few.  And what few I did see appeared to be foreign tourists.   I talked with a family from Israel, and met several from Asia and India along the trail.   But none who “looked like me.”   I guess they were all watching football. 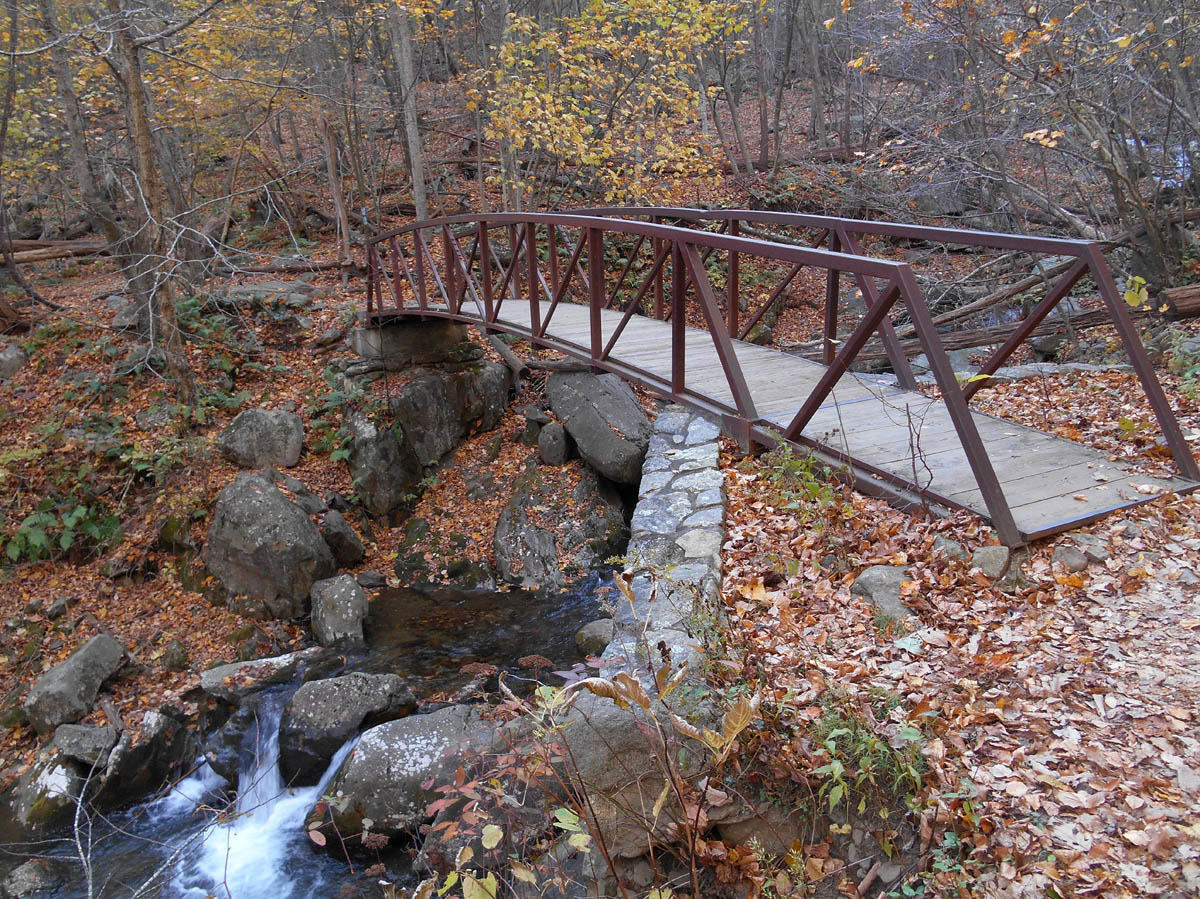 It always interests me to see the hiking attire of the foreign tourists such as the older women from India in their brightly colored saris, and young girls from Asia in their knitted hats with “kitten ears” on their heads, patent leather ankle boots on their feet, and Joseph’s “coat of many colors” in between. 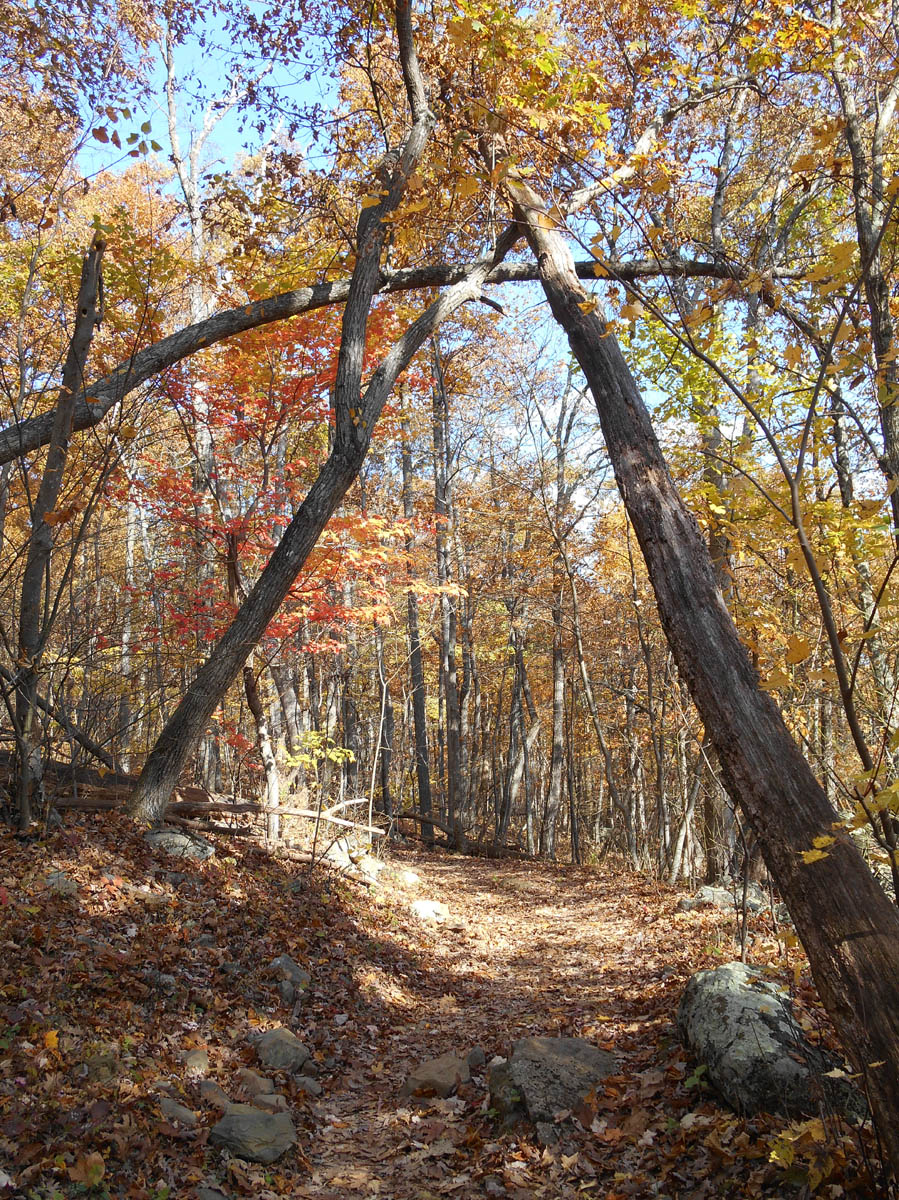 The tourists aren’t the only ones colorfully decked out, as the trees, though past their peak, were still offering brilliant displays of sunny yellow, goldenrod, and deep russet, with a few remaining reds dotted around to accessorize.  Autumn is my very favorite time of the year for hiking, as the sounds and smells of freshly fallen leaves on the trail round out the stimulation of my senses beyond the gorgeous palette of vivid colors. Mother Nature shows what she can really do to rival the springtime flowers.

My methodology for finding my favorite kind of hike is to always start with the Visitor’s Center .   I realize this is like consulting the Lonely Planet guidebook for “favorite restaurant” and showing up to find it full of tourists with their Lonely Planet guides spread out on the table.   But as a solo hiker in a location that has zero cell service and is known for its black bear activity, sometimes the “beaten path” is not such a bad idea.

Shenandoah National Park has a unique trail marking system that I have not seen before.  Rather than using wooden signposts as most trails do, their trailheads are marked with concrete posts with metal bands indicating the distance and direction.    In other words, “bring your bifocals.”  😉 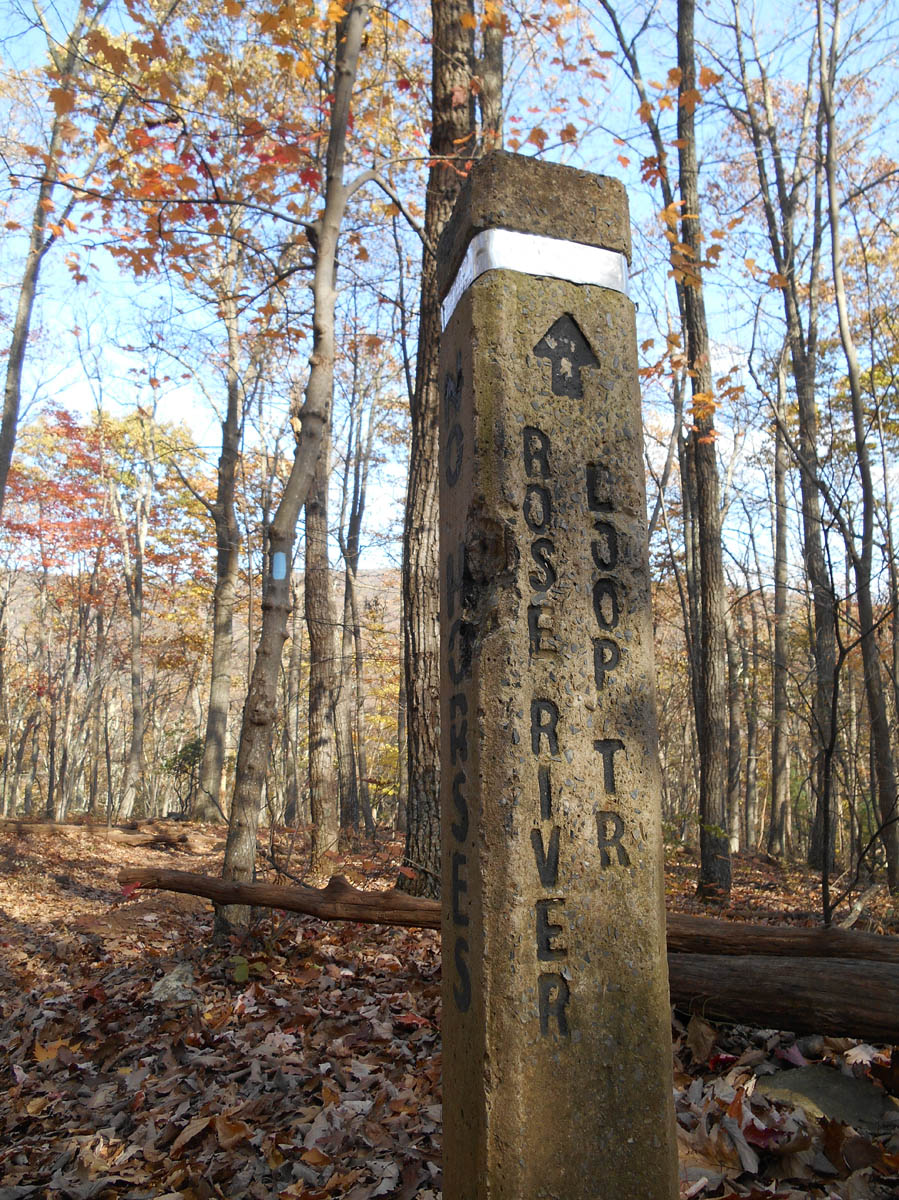 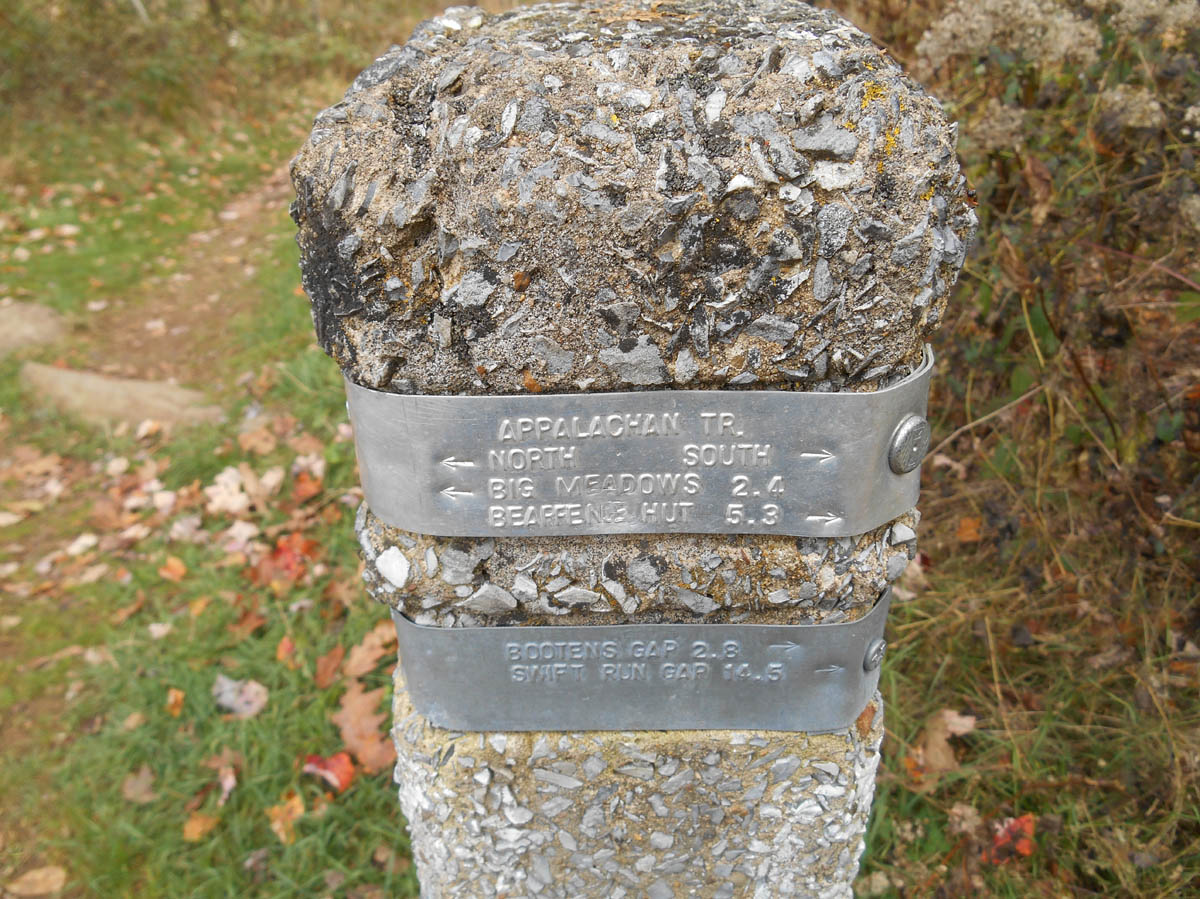 My favorite kind of hike is always around a five mile circuit with some kind of “water feature.”  Due to the traffic on Skyline Drive, I stuck to the Big Meadows area, so I inquired at the Visitor’s Center where the nice young park volunteer recommended Fisher’s Gap Loop Trail, which was right in my “sweet spot.”   It descended through dense hardwoods to Rose River Falls, then hugged the Rose River for the majority of the trail.  Due to the surrounding mountain slopes, the Rose River was one tumbling waterfall after another, with the vegetation ranging from thick mounds of golden leaves freighting down the river, to lush green moss covered rocks and frilly wayside ferns. 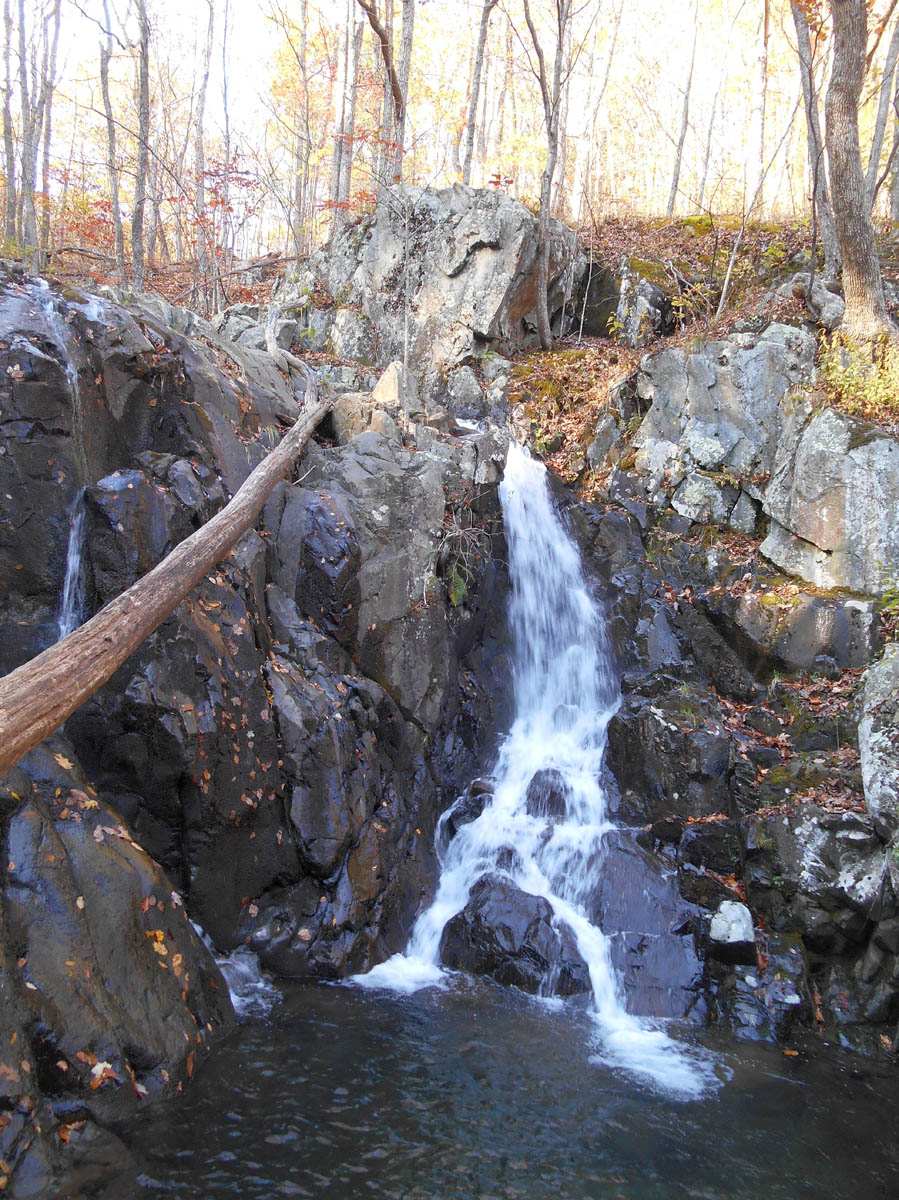 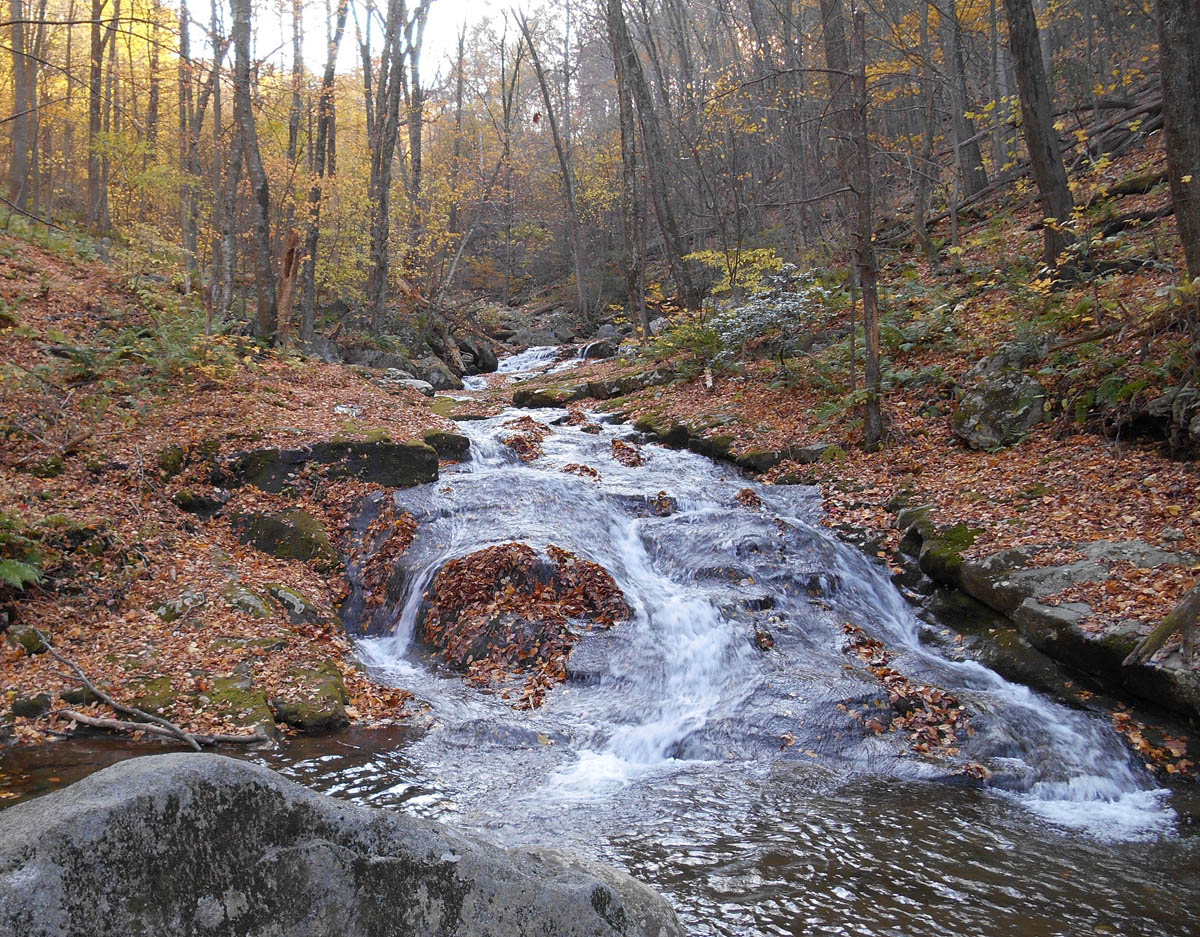 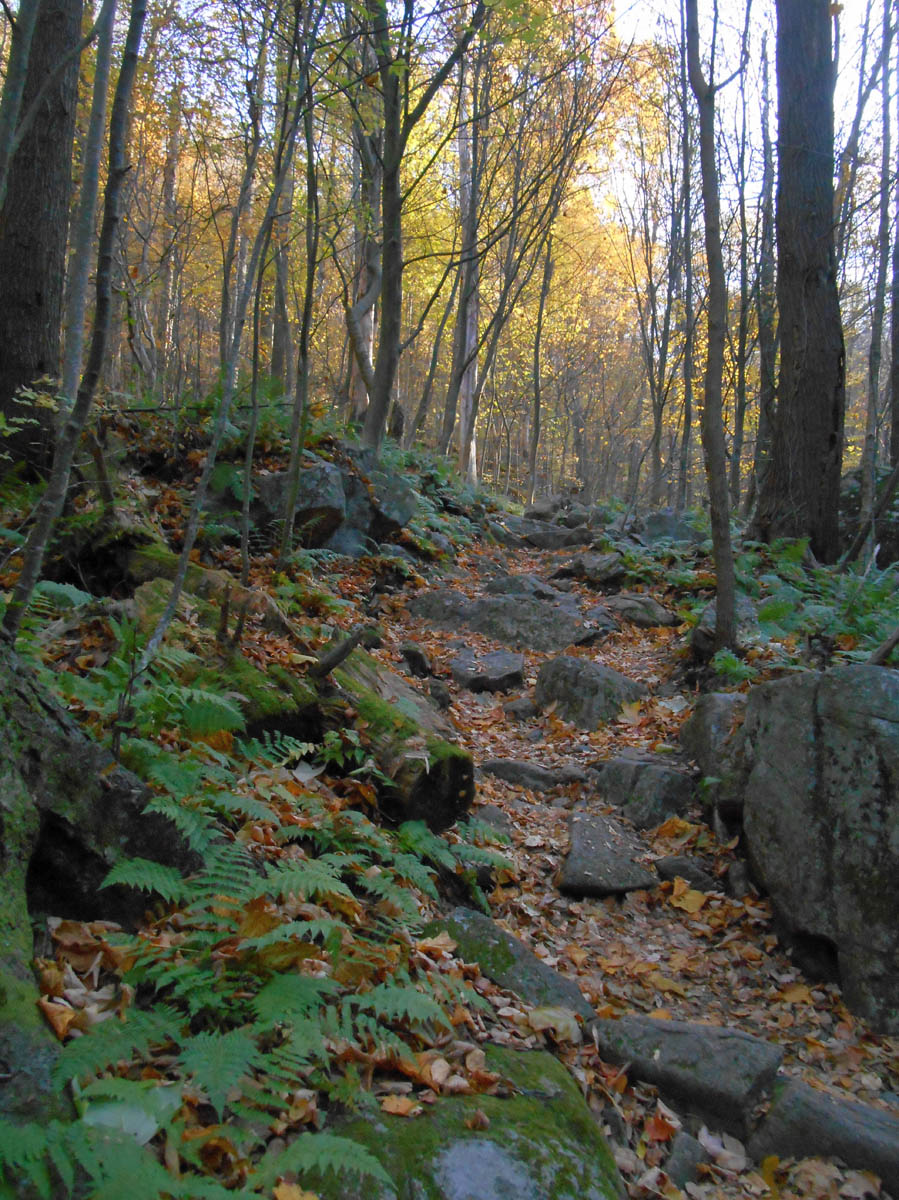 The only downside to hiking in Shenandoah National Park is that all trail heads start high, which means you begin the hike going downhill, so the steep uphill return is going to come at the point when one is most weary.   But the 0.2 mile side trail that led up a steep slope to the Dark Hollow Falls was the exception, since the trail intersection is at the base of the falls.   This is a beautiful 70 foot waterfall that made a nice resting place before the steady climb away from the river and back up to Skyline Drive. 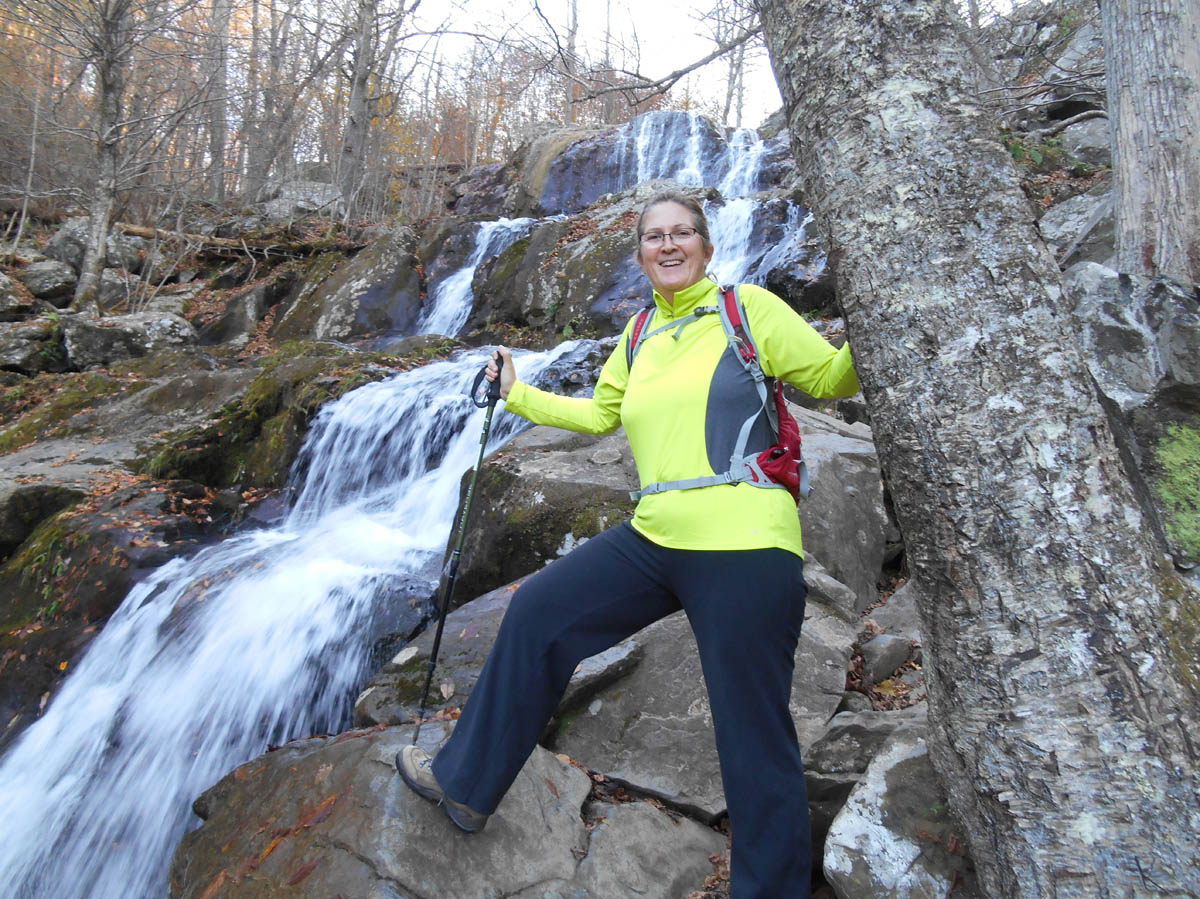 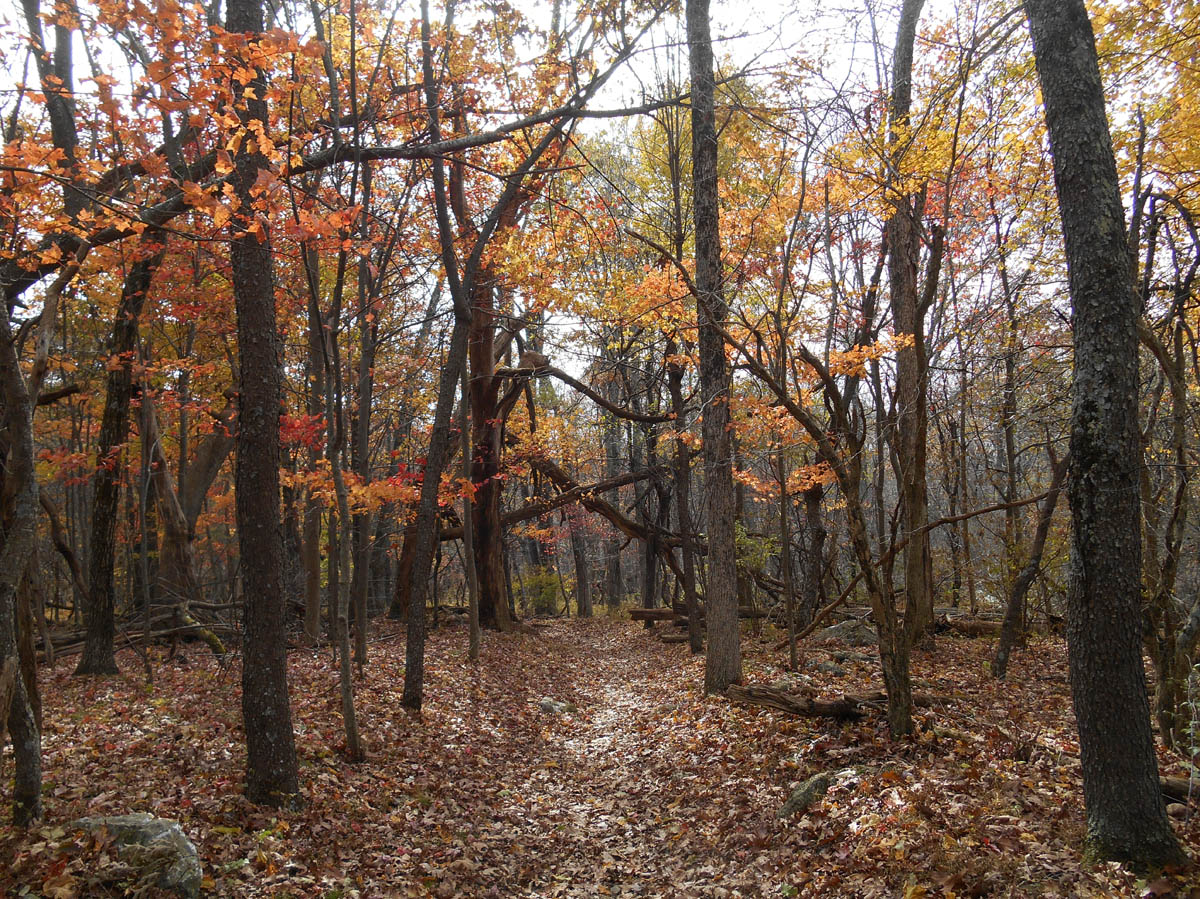 The Appalachian Trail, continuous 2,175 trail from Georgia to Maine.

The Appalachian Trail runs 110 miles through the length the park.   I hiked a few miles of it, though it was the least scenic hike I did in the park.   Still, since I have hiked sections in Georgia, North Carolina, New York and New Jersey, it was fun to hike some of the middle, particularly since I always fantasized about hiking the trail in its entirety some day.   It is hard to comprehend that as far “north” as I feel here in Virginia, I am still not to the midway point of the 2,175 miles between Springer Mountain in Georgia to the northern terminus in Maine.  That happens somewhere further up in mid-Pennsylvania.   Still, it always amuses me to stand on the trail and think “If I keep walking, in a couple of months I’ll be back near my old home in Georgia!”

5 thoughts on “Hiking the Shenandoah”