Skyline Drive is a 105 mile stretch of two-lane that runs north to south, down the backbone of the very narrow Shenandoah National Park along the ridge line of Virginia’s Blue Ridge Mountains. 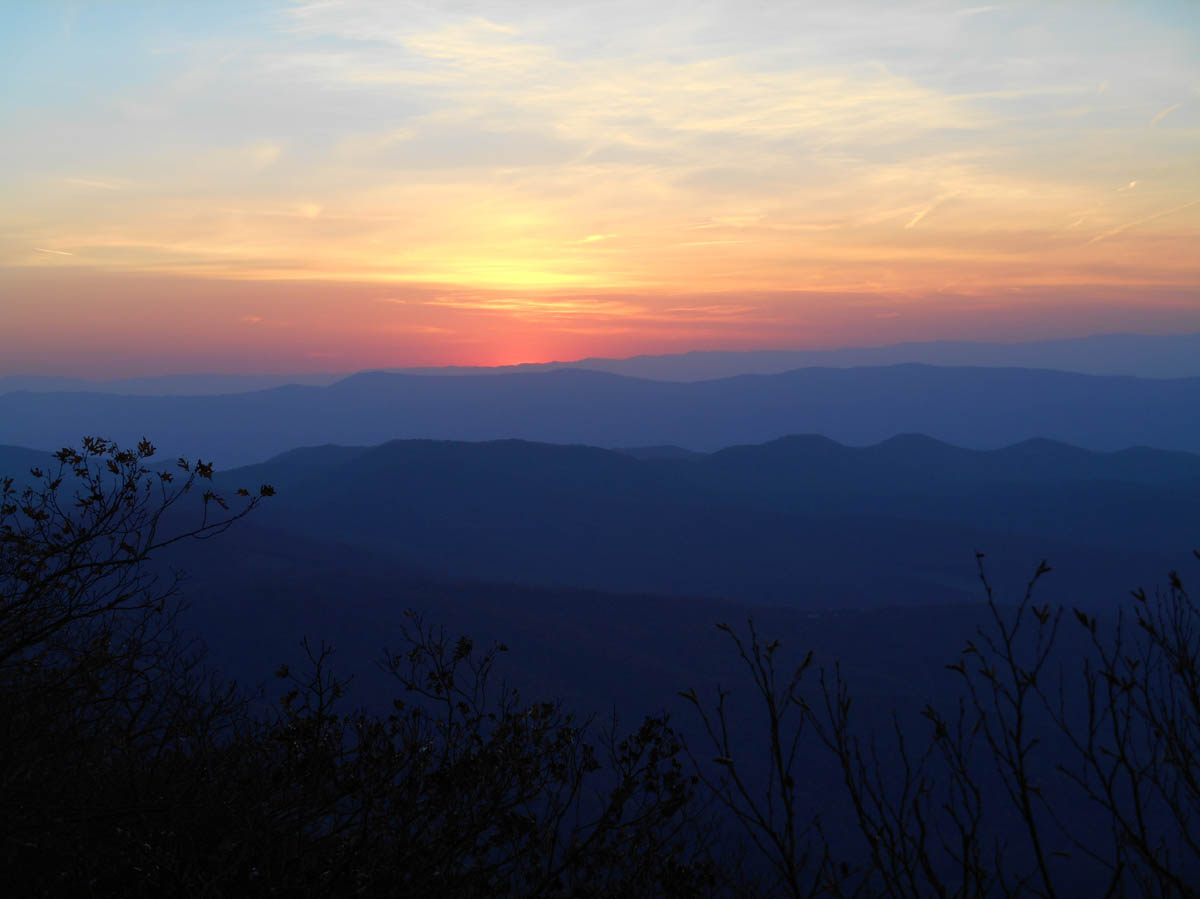 The main feature of this National Park is the drive itself, with the over 500 miles of hiking trails appearing to take a back seat. I think it speaks the obvious about our society that there were a hundred times more people on the drive than on the trails!

Unfortunately, my first impression of the park was less than favorable. After a wait of almost an hour in three lanes of traffic to get through the entrance gate, it was pretty much bumper to bumper all the way to my campground. My fault for trying to go on a weekend, admittedly, but that’s the luck of the draw for a full timing “nine to fiver.” It beats the alternative of my former life — a Saturday filled with mowing the lawn and cleaning the gutters. 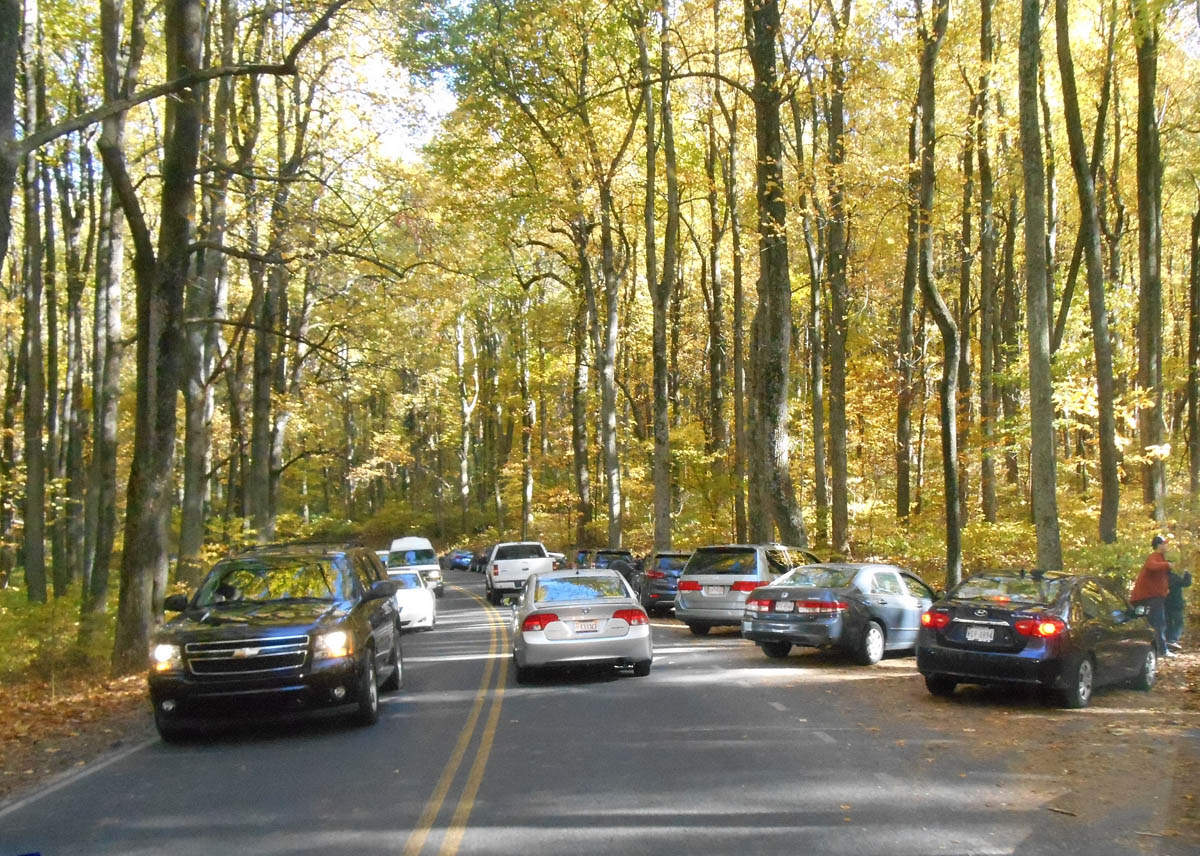 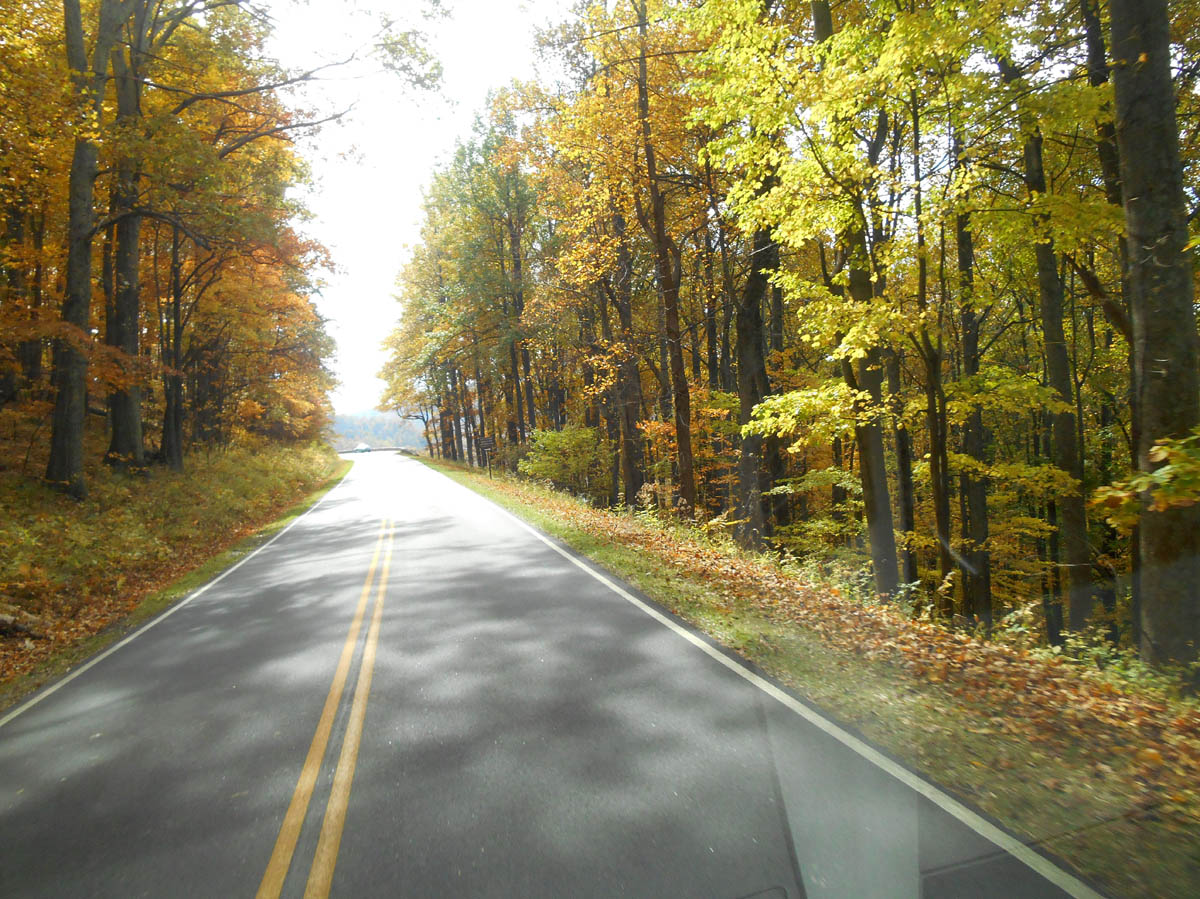 Monday driving comes as a relief!

The heavily patrolled 35 mph speed limit on Saturday took some of the pressure off, though I could still sense the frustration of the convertible sports car drivers, their frenetic pace being held in check by the frequent sight of blue flashing lights from the Park Ranger patrol cars, and those giant portable radar read-outs that flash your digital speed back at you upon approach.

My planned strategy would be to pull over often onto one of the 50 turn-outs along the drive and let the traffic get a break from the back of my RV as their front windshield view. Only there was rarely any room for me to pull over due to the crowds and little need since I was not exactly the lead pace car! 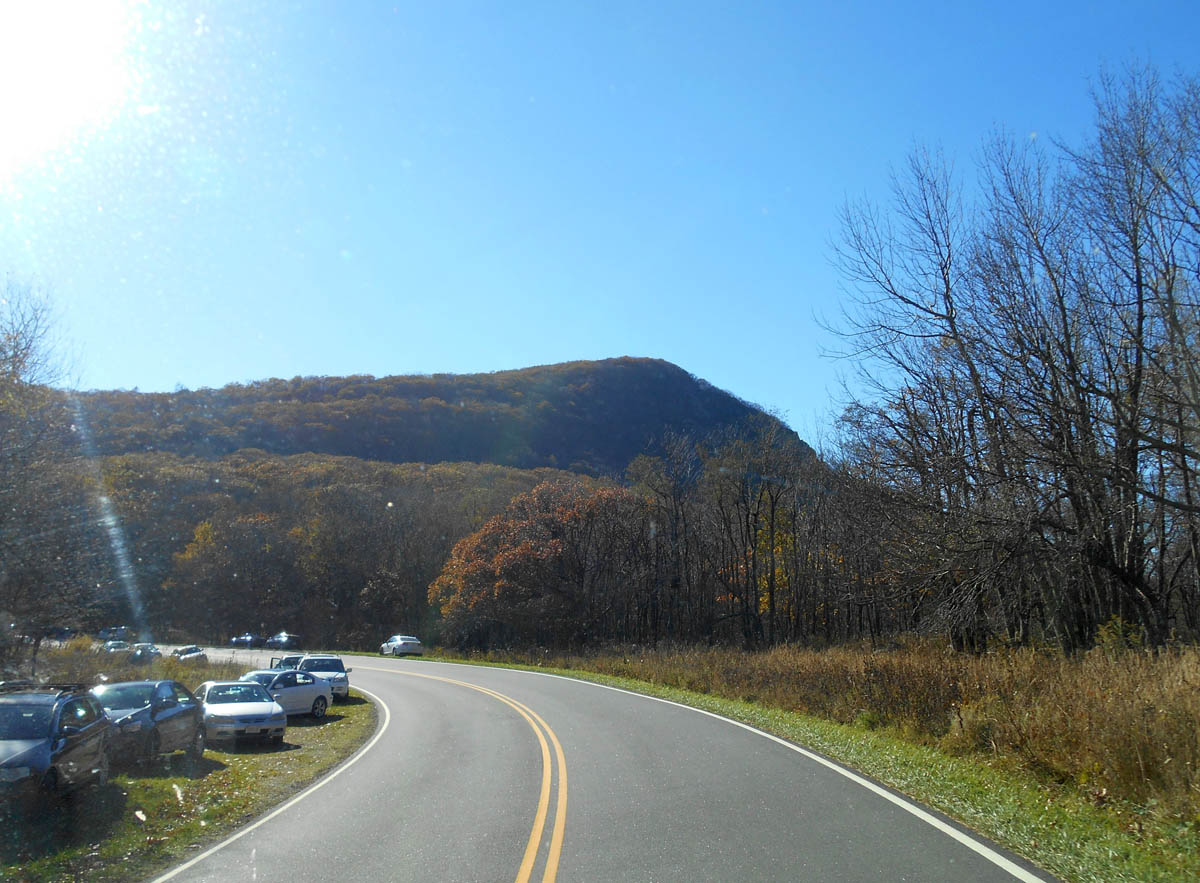 “Overflow Parking” on approach to a scenic lookout. 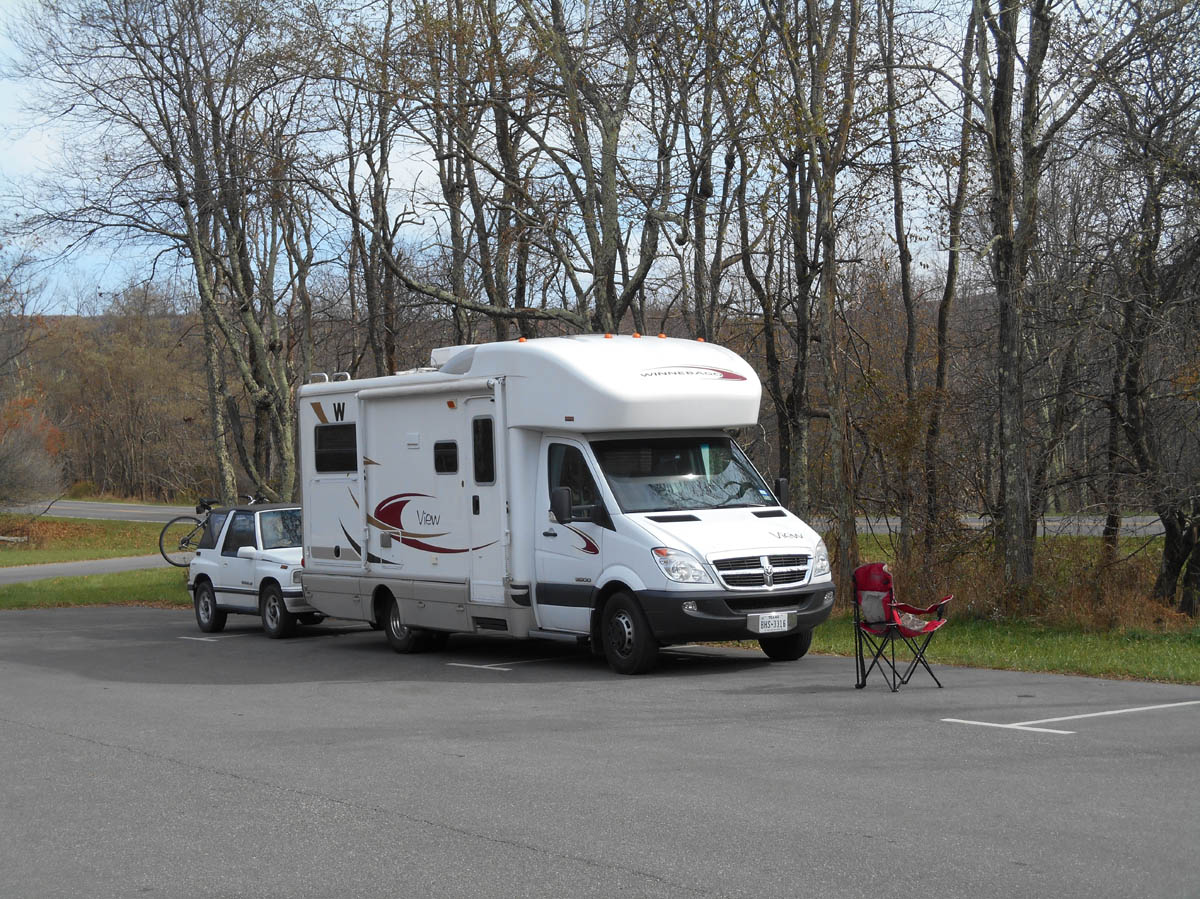 “Don’t fence me in!” My kooky chair marker strategy to prevent my egress from being blocked, since I cannot back up with tow bar.

But by late Sunday afternoon and Monday, the Drive had redeemed itself. No more traffic jams, flashing blue Ranger lights, and I had to the road practically to myself the remaining 50 miles southbound, with plenty of room to pull over to enjoy the view. It was well worth burning one of my few remaining vacation days to have the weekday experience as a welcomed contrast to Saturday’s mayhem. 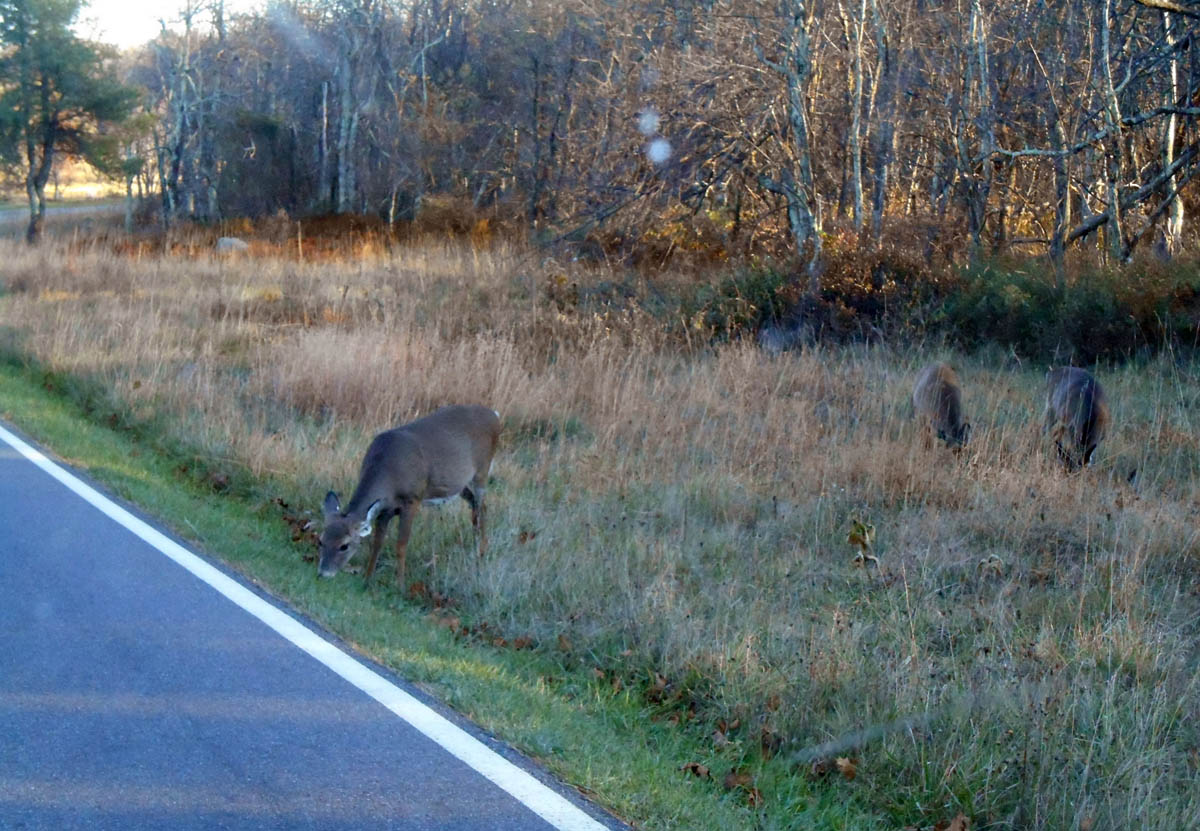 One of the many justifications for the 35mph speed limit.

I overnighted at the halfway point, “Big Meadows,” location of the main Visitor Center, Big Meadows Lodge, and one of the four campgrounds in the park. Although I had read it was not the most desirable of the four campgrounds, I opted for it because it was the only campground still taking reservations this late in the season. The fact that it was sold out long before the shut-down seemed like a good indicator that the remaining two open “first come, first served” campgrounds were too risky for a leaf-peeping weekend. Fortunately I was able to grab one of the last reservable spots that opened up right after the shut-down ended.

The campground was “adequate.” Not too many level spots or privacy, but the location couldn’t be beat. I enjoyed having the Lodge within walking distance, since the campground had no hookups. It was nice to sit by the lobby fire each night and take advantage of their wifi. I had dinner in the dining room. What the food lacked in quality, it gained in ambiance, with a table by the giant fireplace on a 30 degree night. 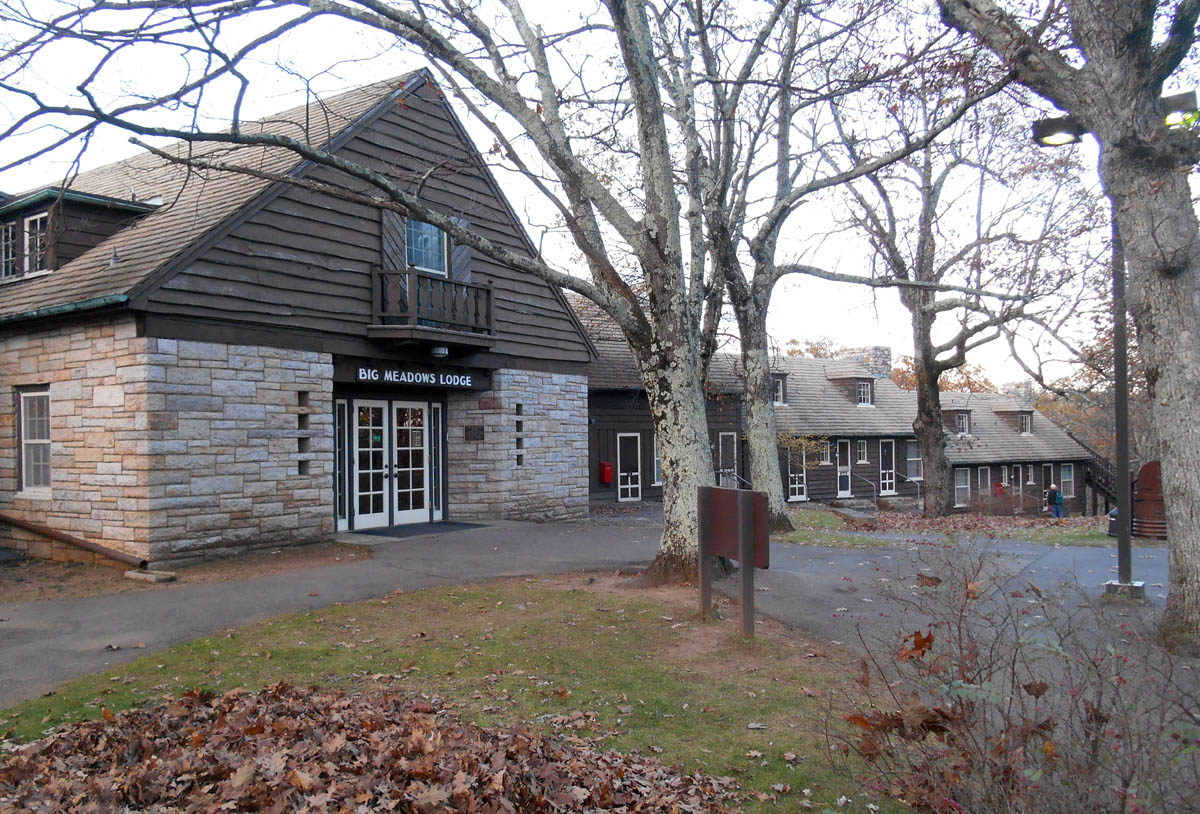 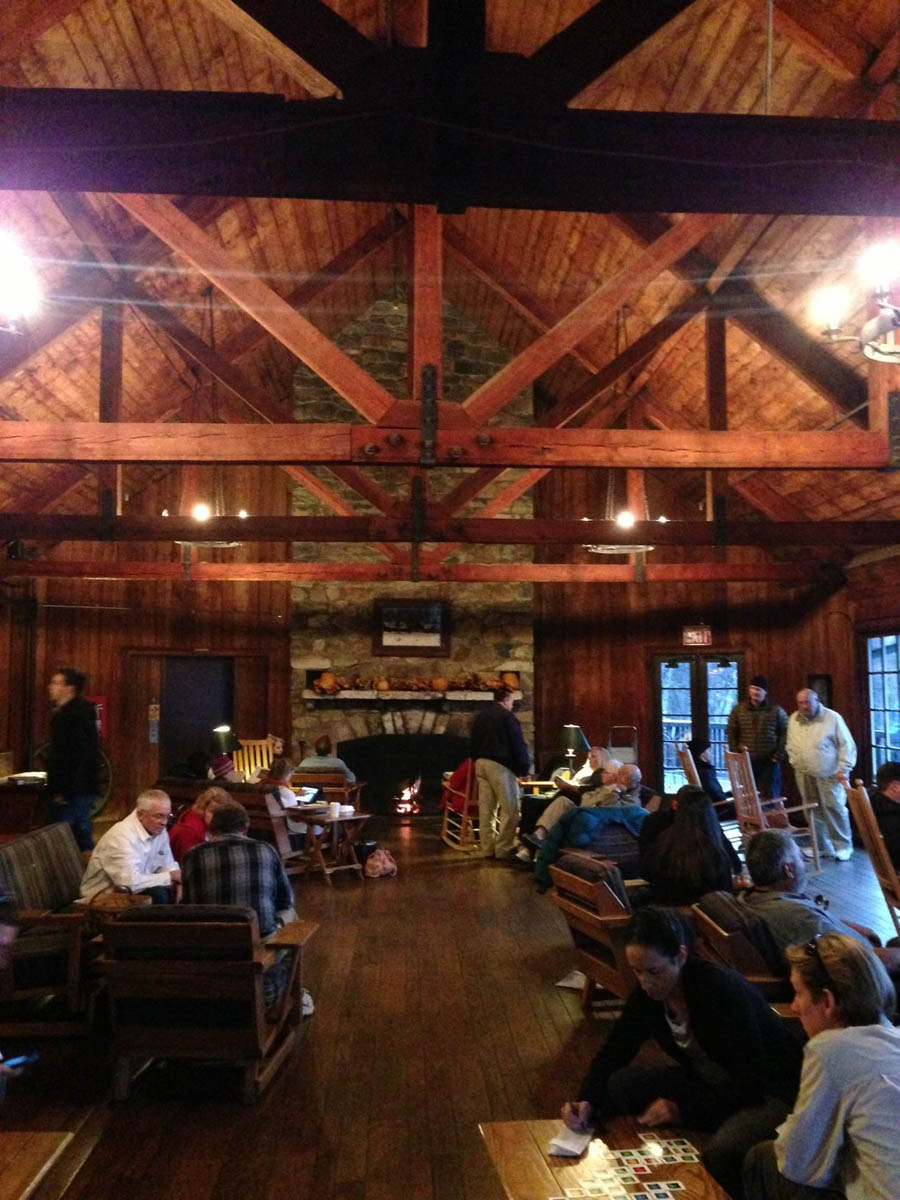 Lodge offers a nice warm fire and the only signal in the park!

As with several State Parks in Texas, a good deal of Skyline Drive and Big Meadows was constructed by the “CCC boys,” or Civilian Conservation Corp as a part of FDR’s Public Works program in attempt to bring the country out of the depths of the Great Depression. This “New Deal to Rebuild a Nation” focused primarily on the 100 ft wide Skyline Drive, building stone guard walls and trail maintenance, as well as landscaping, which is considered somewhat of a detriment for a National Park today, as many of the vegetation along the vistas is not truly “native.” 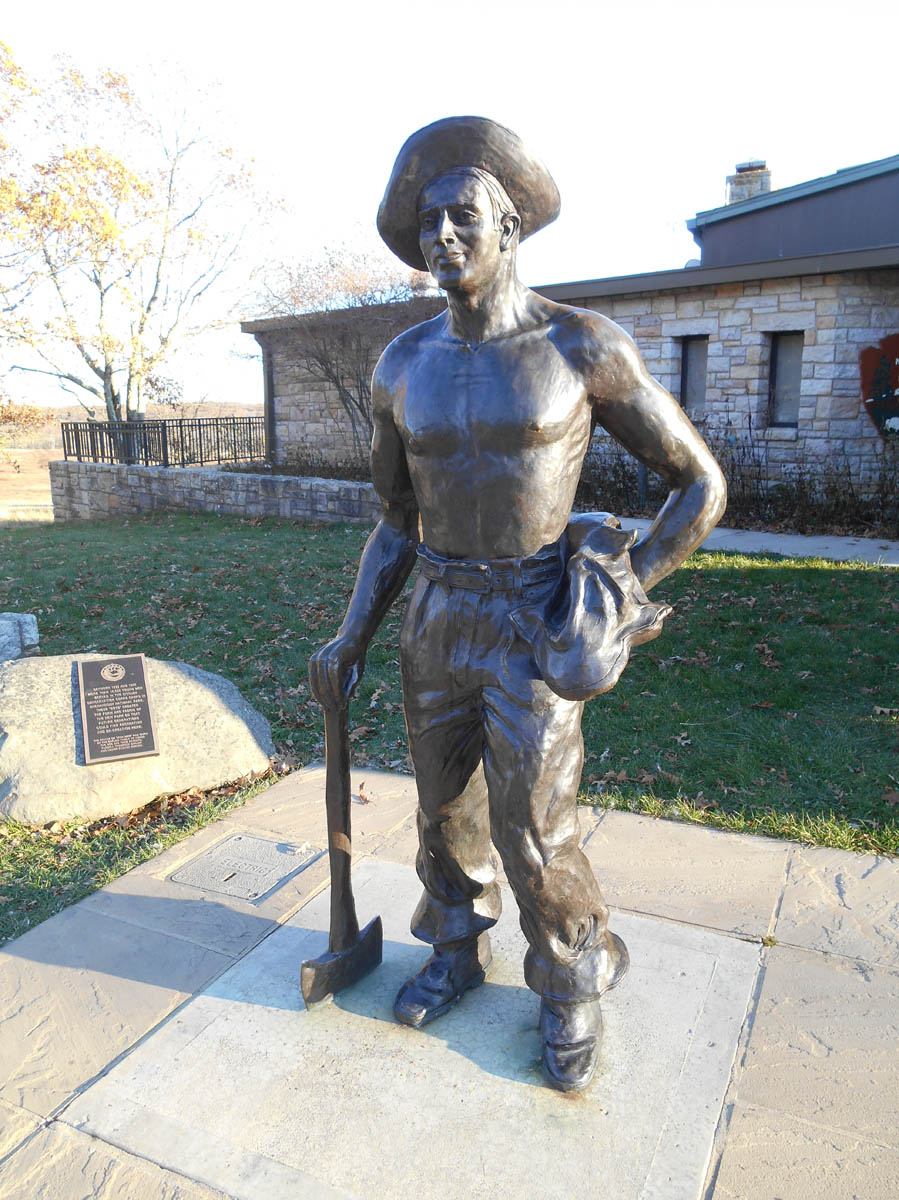 “Iron Mike,” one of the CCC who helped build park facilities 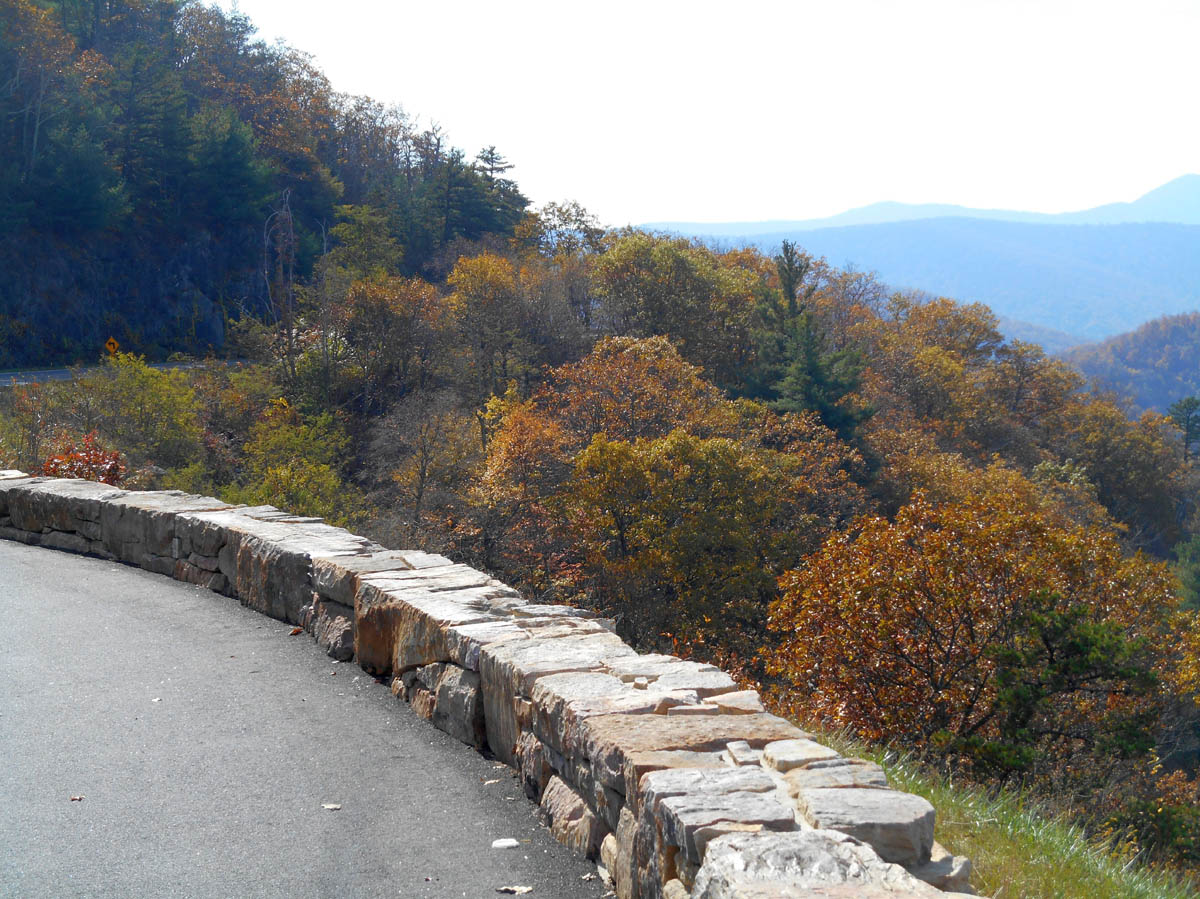 I do have to say, I ended up enjoying the drive itself, much more than the time I spent on the Blue Ridge Parkway. One reason was the lower 35 mph speed limit. No pressure to go faster than my comfort level while towing and braking around the descending curves, with the highest point on Skyline Drive being 3,680 ft versus the 6,000 ft of the BRP. The steeper hills, faster speed limit (45 mph) and the foreboding tunnels on the BRP had me white knuckling most of the time, with people riding my tail and fewer turn-outs to let the traffic pass. I was much more relaxed on Skyline Drive. Or maybe it is the fact that I have about 4,000 more miles under my belt now than I did when I drove the BRP last May. 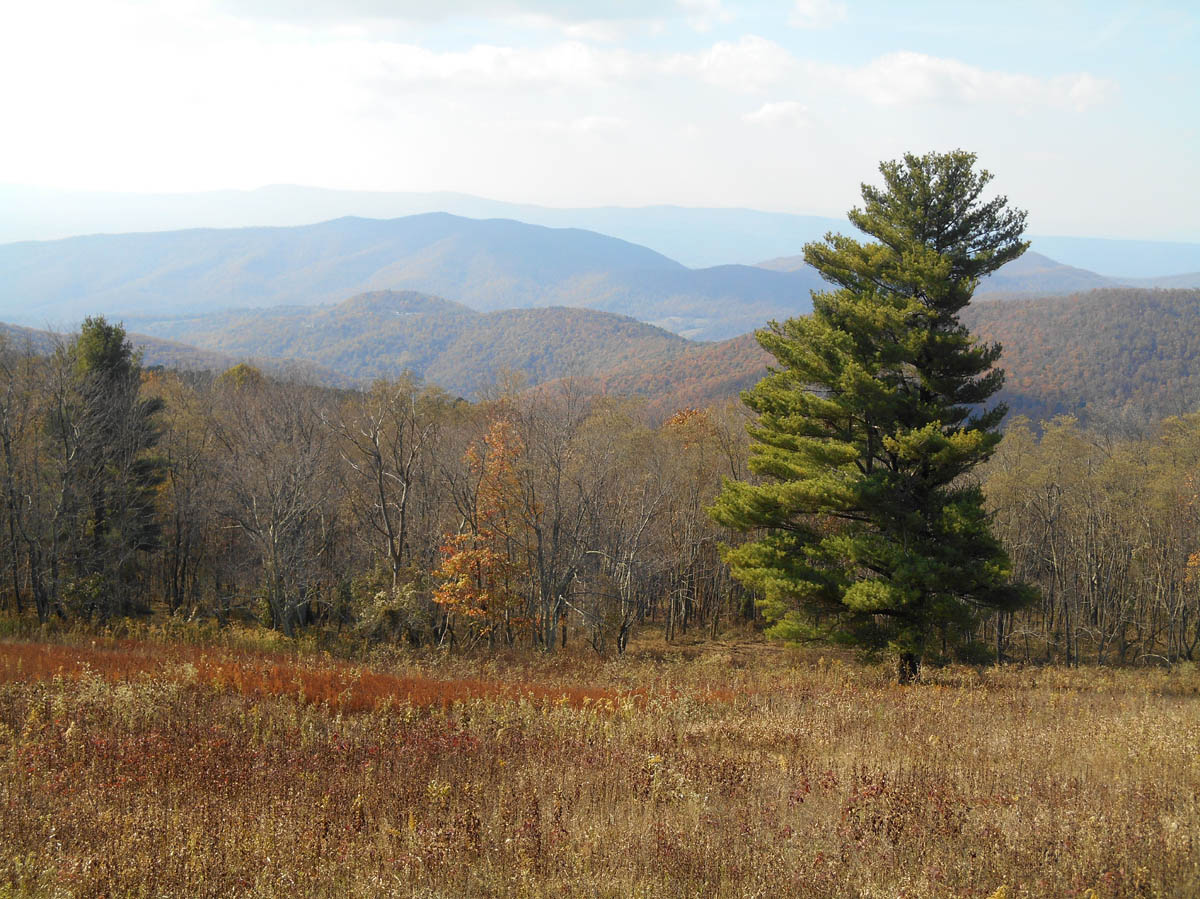 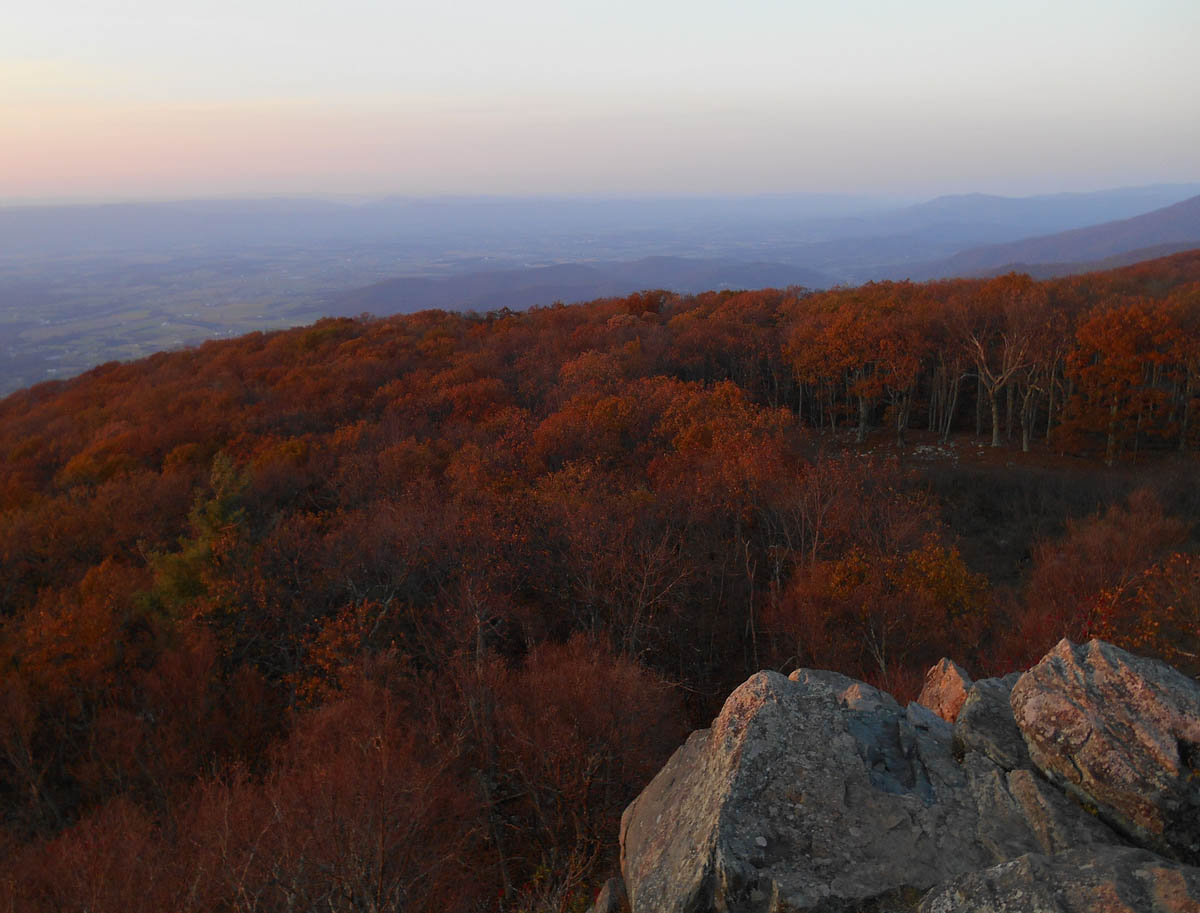 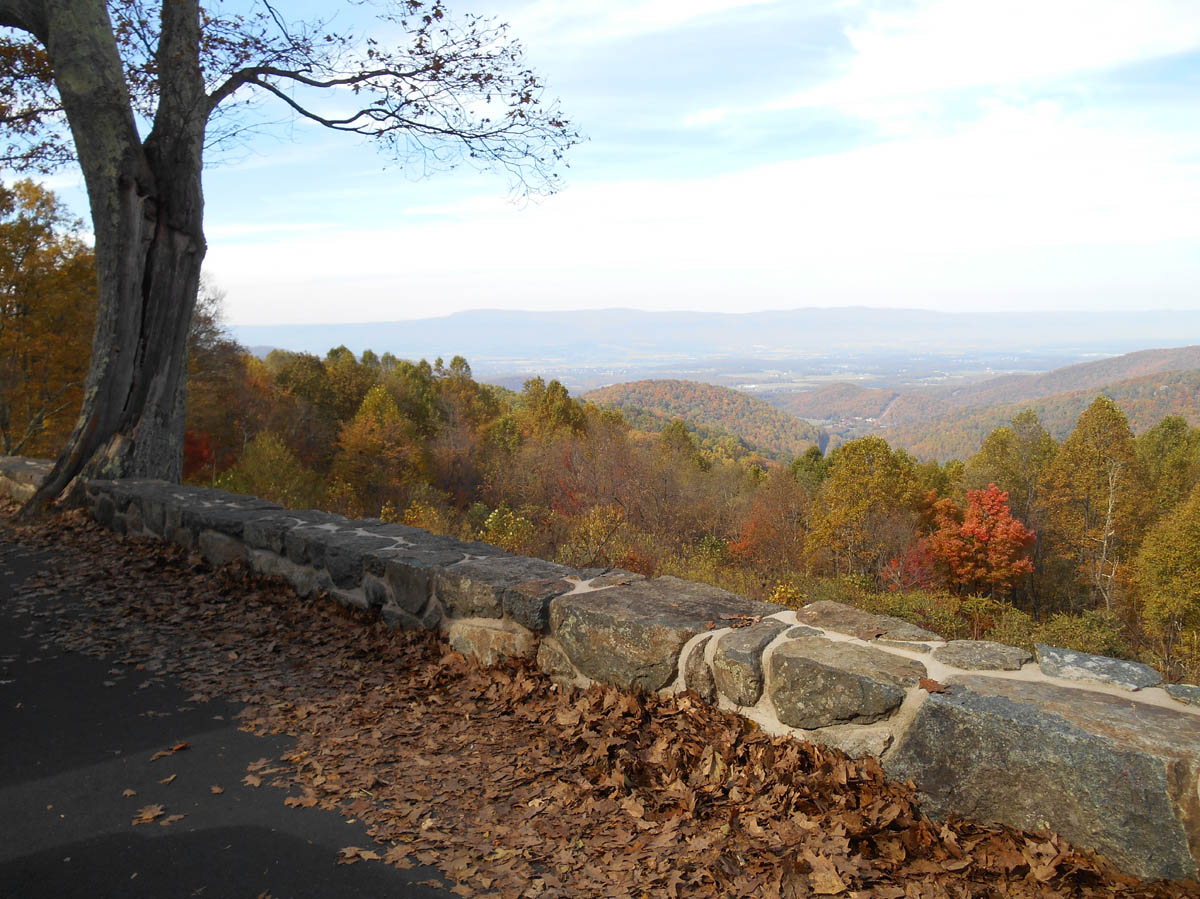 And the little “Skinny Winnie” seems ready-made for a drive like this. It is so much fun to sit up high, overlooking the parked cars and stone railings along the turn-outs, peering out over the tiered hilltops across the Shenandoah Valley. And then, there are those rare moments when the road crests along the actual ridge line, enabling vistas out of both sides of the windows. Aaaahhh, those views….along with Norah Jones’ “Come away with me” flowing through the cab as the added soundtrack as I rounded the sweeping curves and crested the rolling hills. It was a good day to be alive….and a good thing I had the Tracker in tow to slow me down!

4 thoughts on “The Ups and Downs of Skyline Drive”