Since I took my virtual office on the road, my life sometimes feels like a game of “Frogger,” that old 1980’s video game, back in the day when video games were the size of an entire phone booth rather than a smart phone.   Life seems like a series of lily pads, highways, and RV Parks where I must wait for them all to align with my work schedule before I can “leap” to the next safe stop.    Although I have been with the same company for 20+ years, they are still a very large corporation, and therefore not too “forgiving” if I don’t land on the lily pad by 9:00am CT on Monday morning. 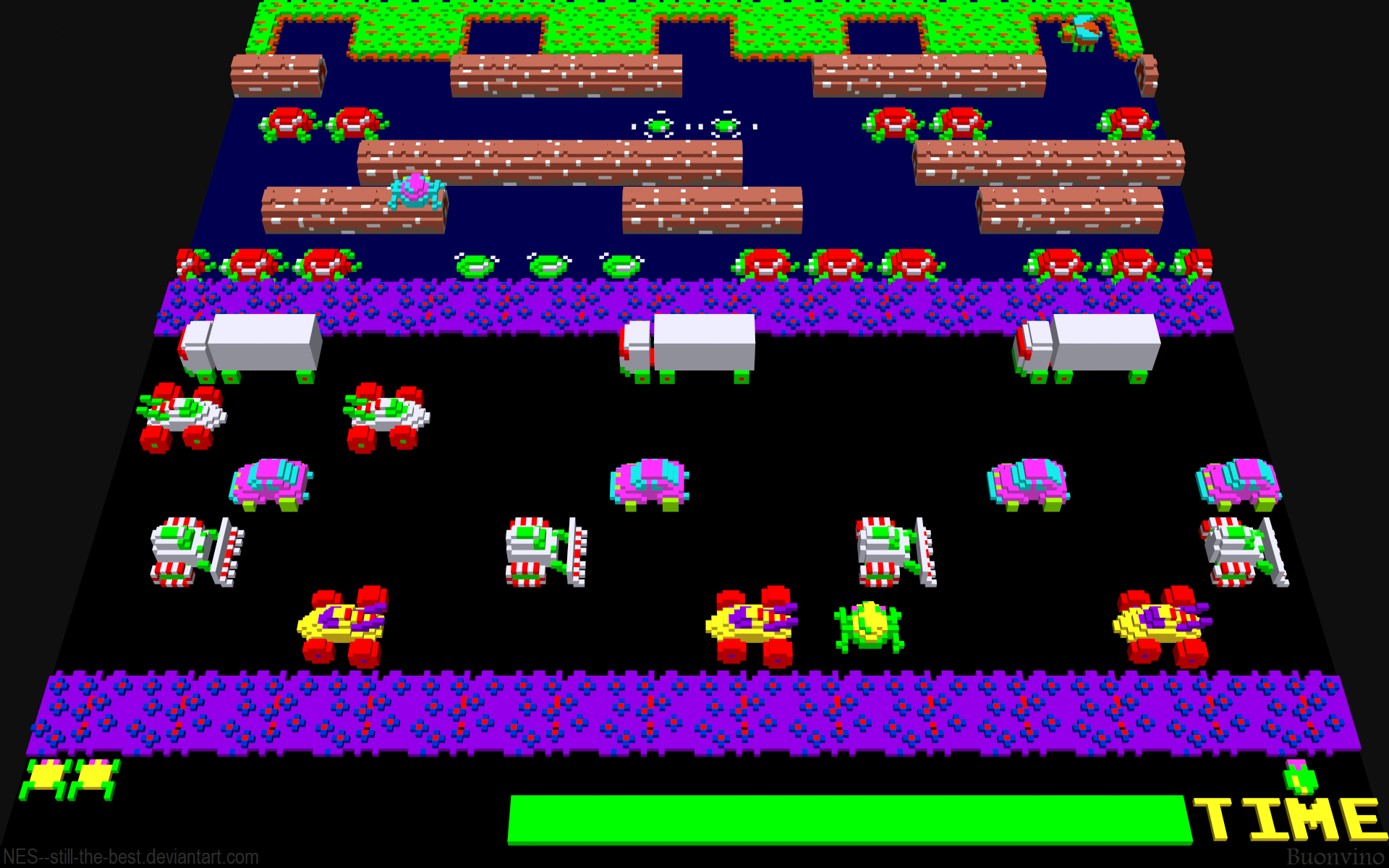 So it is that I found myself in the “Singing Hills” Campground in Cave City, Kentucky with an entire week to entertain myself.  I came for the weekend to visit Mammoth Cave National Park, but without enough time to “leap” to the next location, it would be a long week in Cave City, as there is nothing bleaker from a tourist standpoint than a tiny town of rock shops, fudge stores, miniature golf courses, and “Dinosaur World,” all boarded up for the off season. 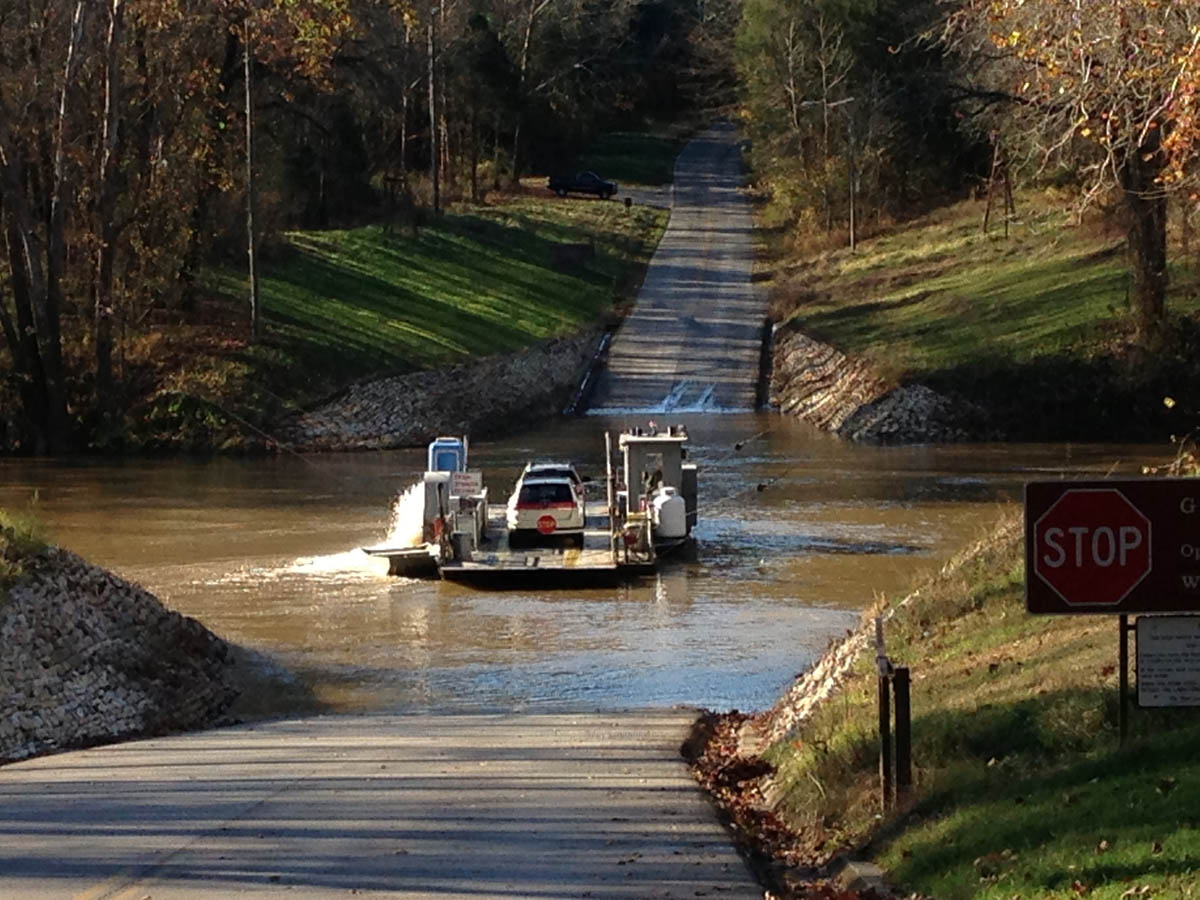 There were several options for campgrounds with hookups (necessary to handle the load of 3 laptops, 2 telephones, and a VOIP in a Pear Tree,) but I was attracted to the website of “Singing Hills,” because it talked of the peace and quiet, except for the “singing” of the birds and frogs.   I must have stopped reading before I got to the part where it said those “birds” were actually roosters.    Lots and lots of roosters.   “Screeching Hills” might have been more appropriate.      It didn’t help that I encountered a two hour time shift in one relocation.   I crossed the border from the Eastern Time zone into Central on the same weekend that we “fell back” from Daylight Savings Time. Since the rooster alarm does not synch with my alarm, I was now “up with the chickens.”  The friendly proprietors and beautiful sunrises helped balance it out, while I tried lulling myself back to sleep with the mantra, “Just pretend you’re in Mexico,” a place that I dearly love. 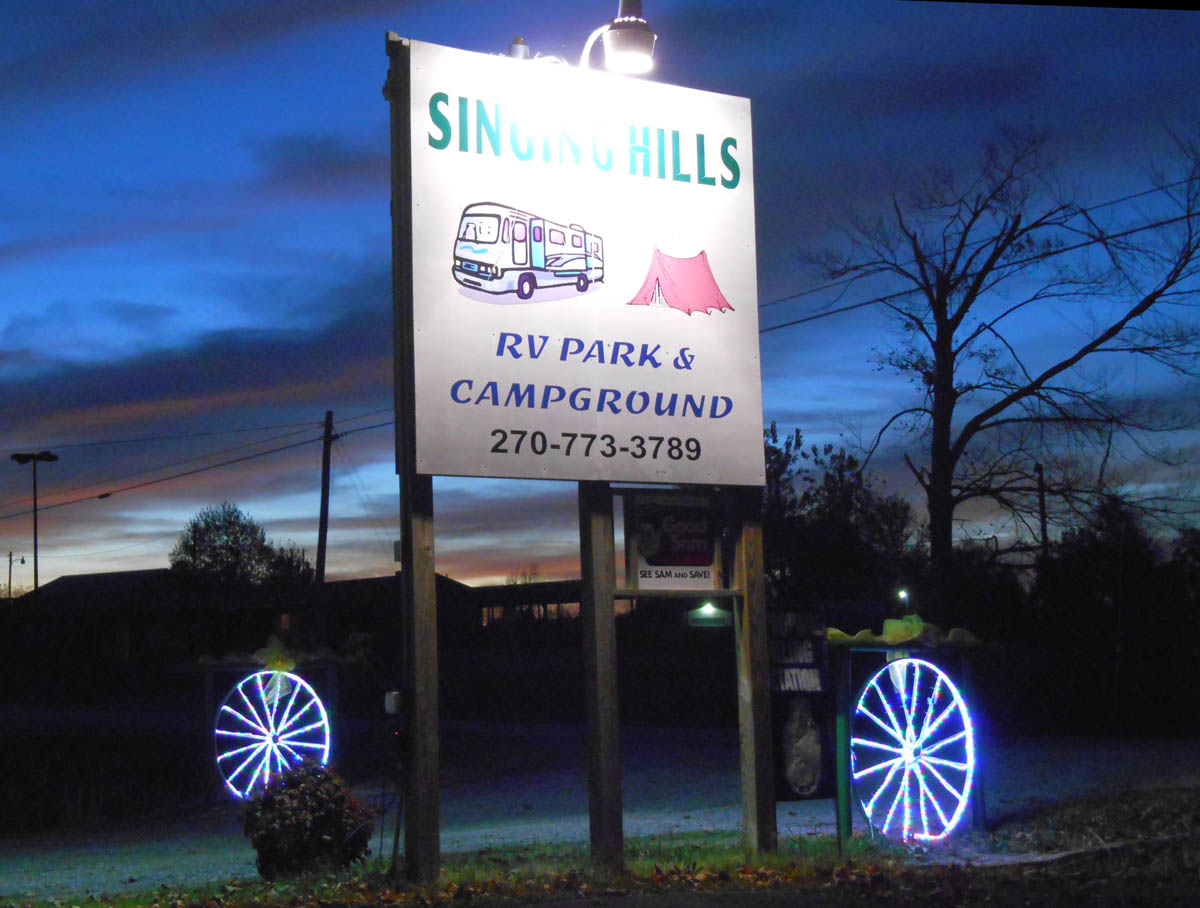 “Just swing in wide between the two wagon wheels”

My only entertainment option in Cave City was the 18 mile Mammoth Cave “rail trail” that went from the NPS visitor’s center to the neighboring Park City, KY.   This former rail line, completed in 1886, brought tourists to Mammoth Cave in steam engine style at $3.00 per ticket. 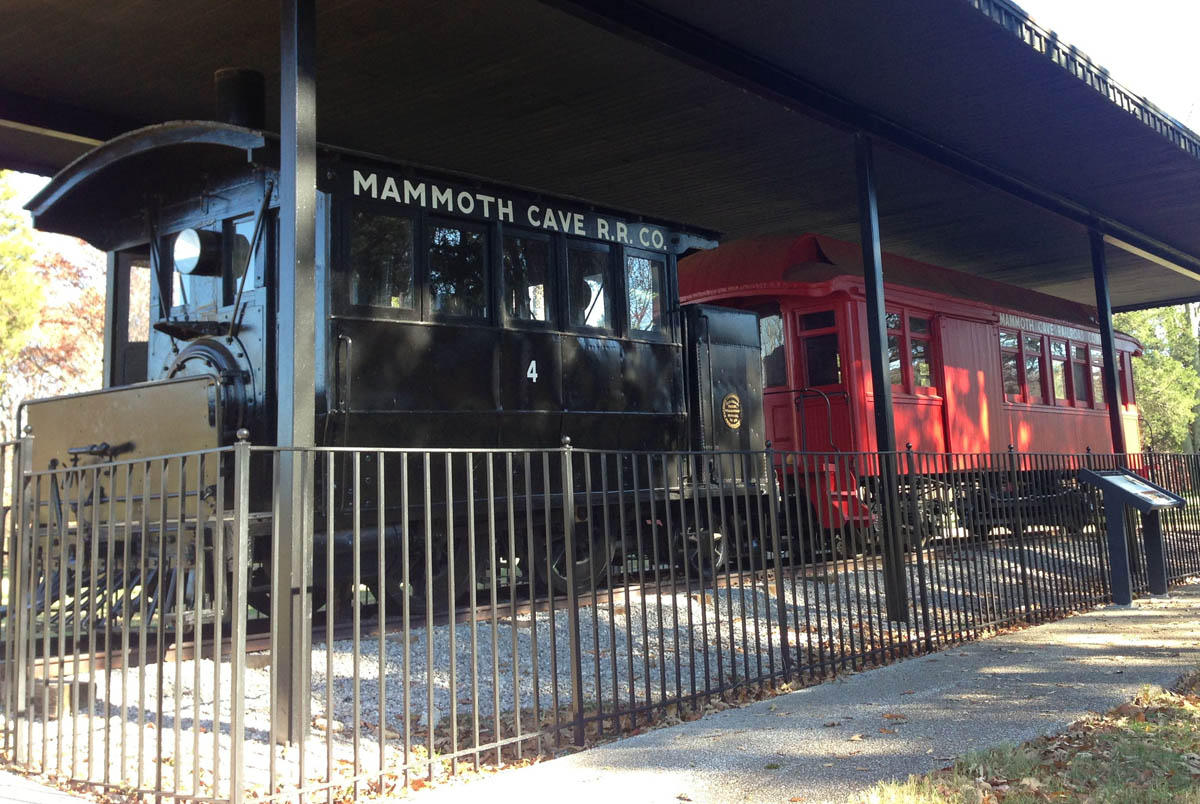 Original “Engine No. 4” from the 1886 Mammoth Cave Railroad

Whenever I see the words “rail trail,” I immediately think of a nice leisurely pedal along a reasonably straight, wide graveled path.   However, in the case of the Mammoth Cave Rail Trail, the map warns, “Please Note:  Although this trail follows portions of the traditional Mammoth Cave Railroad line, it is NOT a uniformly flat, level trail.  You are traveling in hilly country, and must ascend and descend grades that can in places be steep and difficult.   They weren’t kidding. 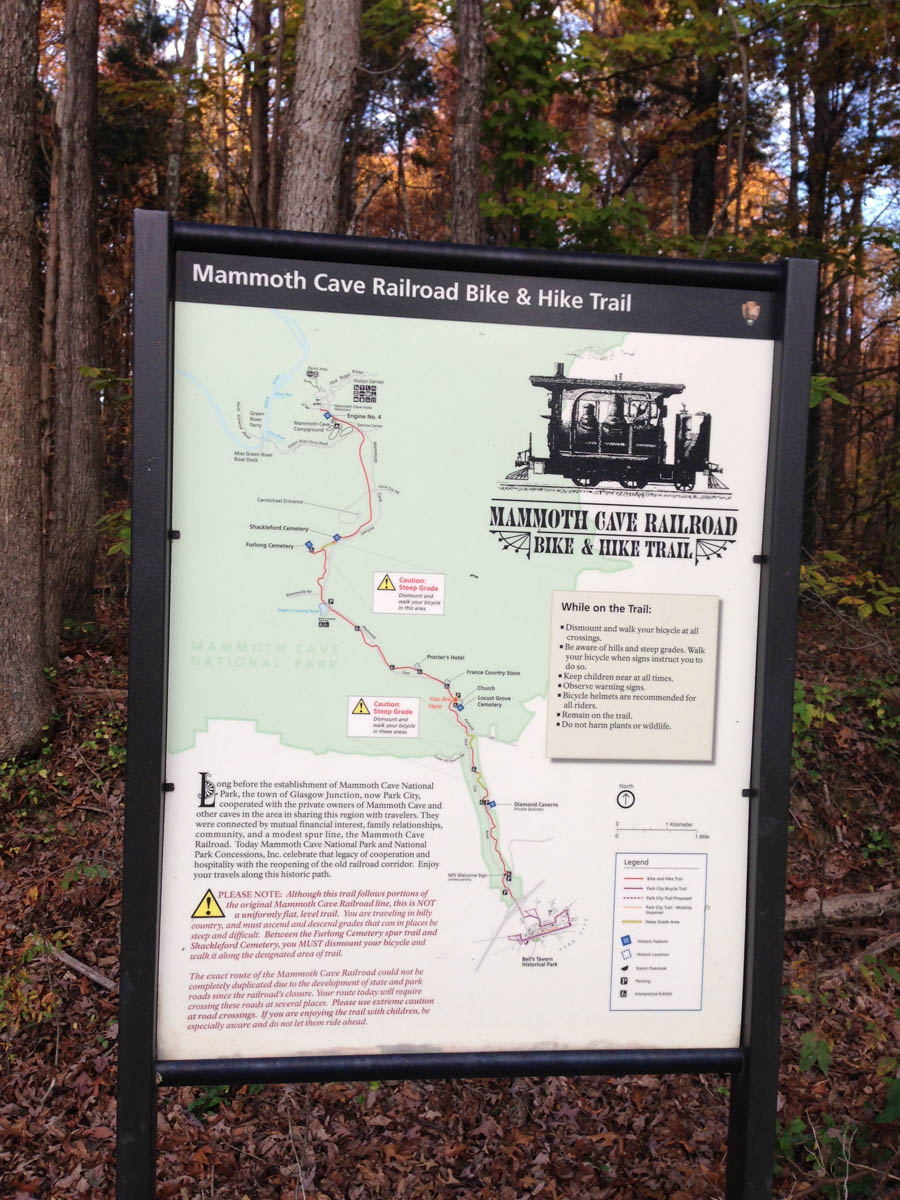 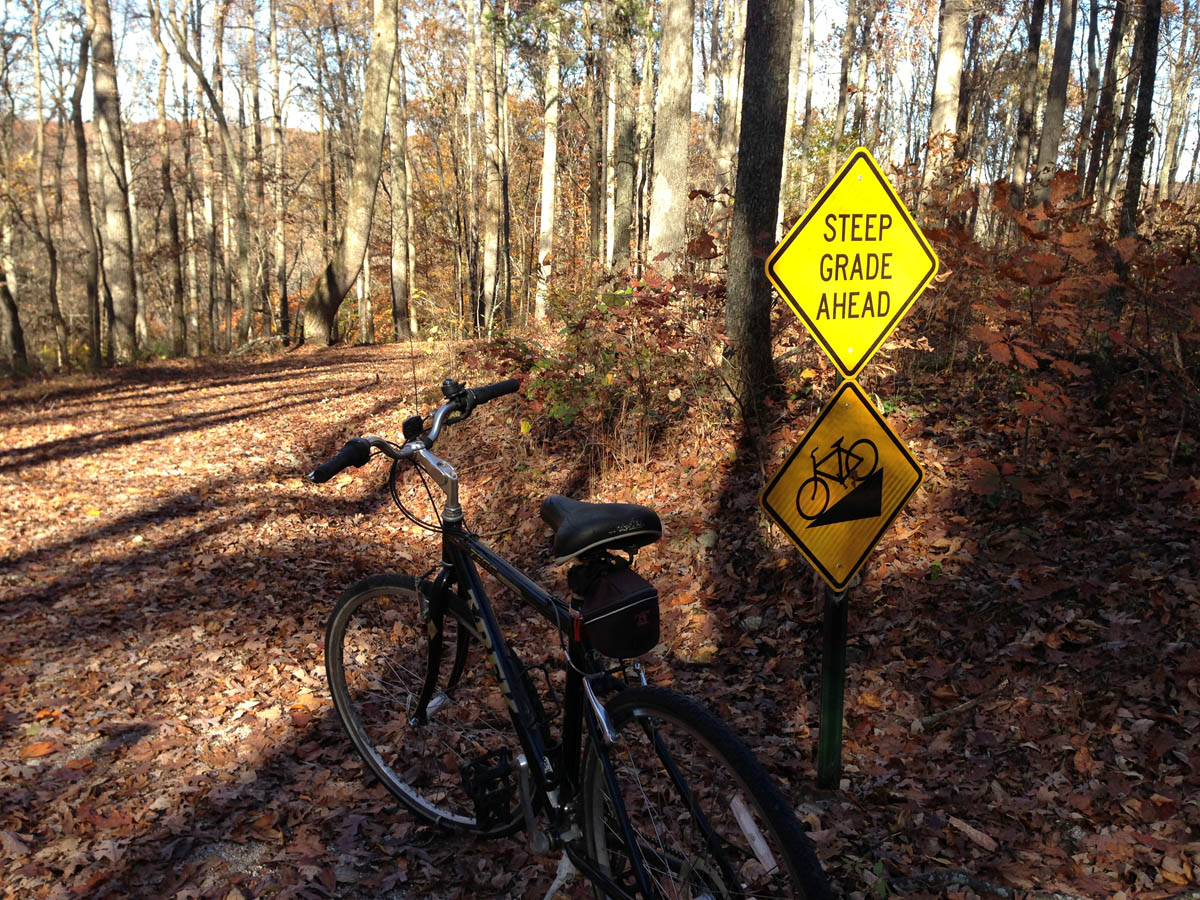 I don’t know why I felt so driven to ride this trail in its entirety.   I think because it was my only defense against boredom, living out my next window of opportunity to leap to the next destination.  I realize most people ride 18 miles in one morning, but now being on the furthest most Eastern edge of the Central Time Zone, I was facing darkness at 4:45pm.   And despite the rooster’s best intentions, I am never going to be one to hop out of bed and scrape the frost off my bicycle seat for a quick ride when it is 30 degrees outside.   So this left only my lunch hour to cover 18 miles, not counting 10 minutes commute to the trailhead on an “unfriendly-to-bikes” busy two-lane road with lots of blind curves.   So I would need to break it up into four sections, Tuesday through Friday. 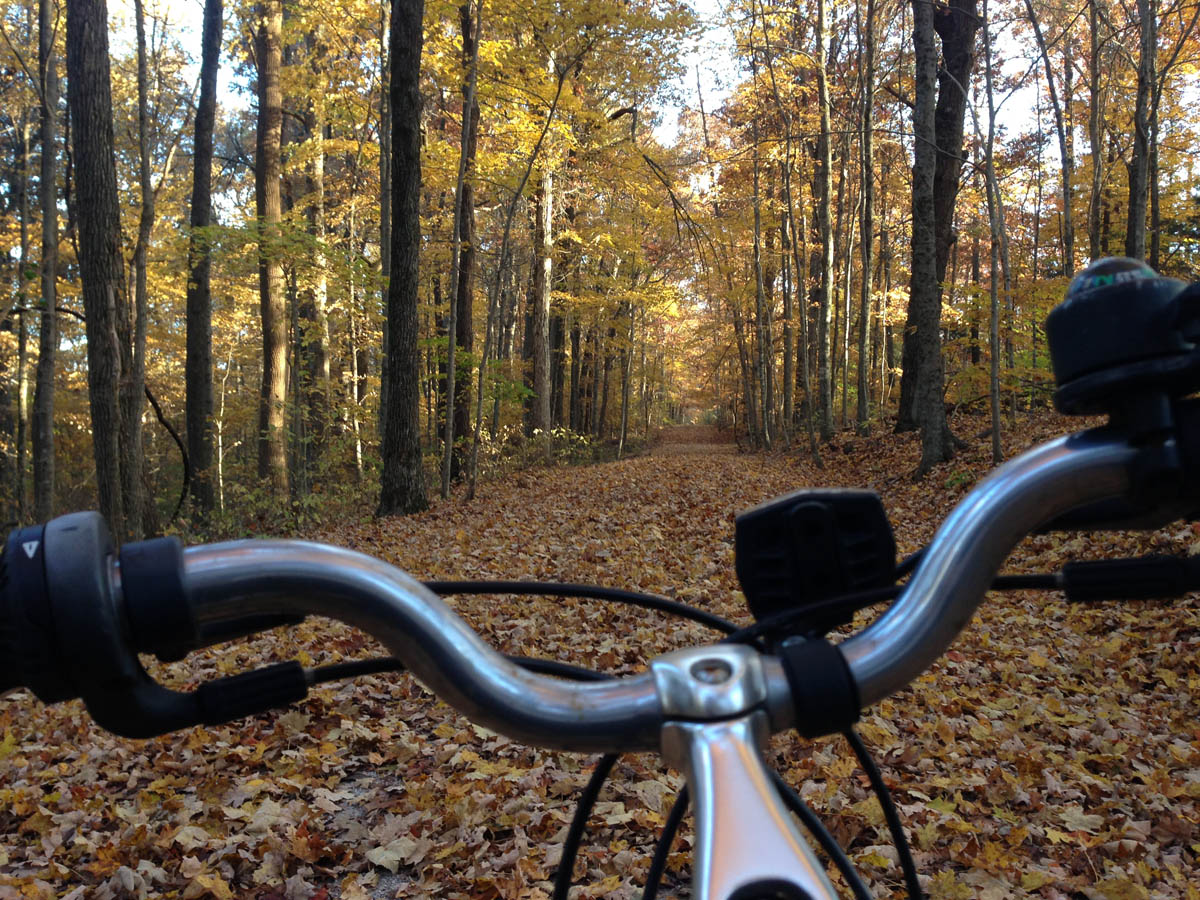 The first two days were a blast, riding up and down the small hills through piles of leaves so thick that the trail was no longer distinguishable in places.   This made for some laughable wrong turns leading to century-old cemeteries, old homesteads, and deep ditches, with flashbacks to my childhood of days spent exploring the old abandoned country roads near the family farm. 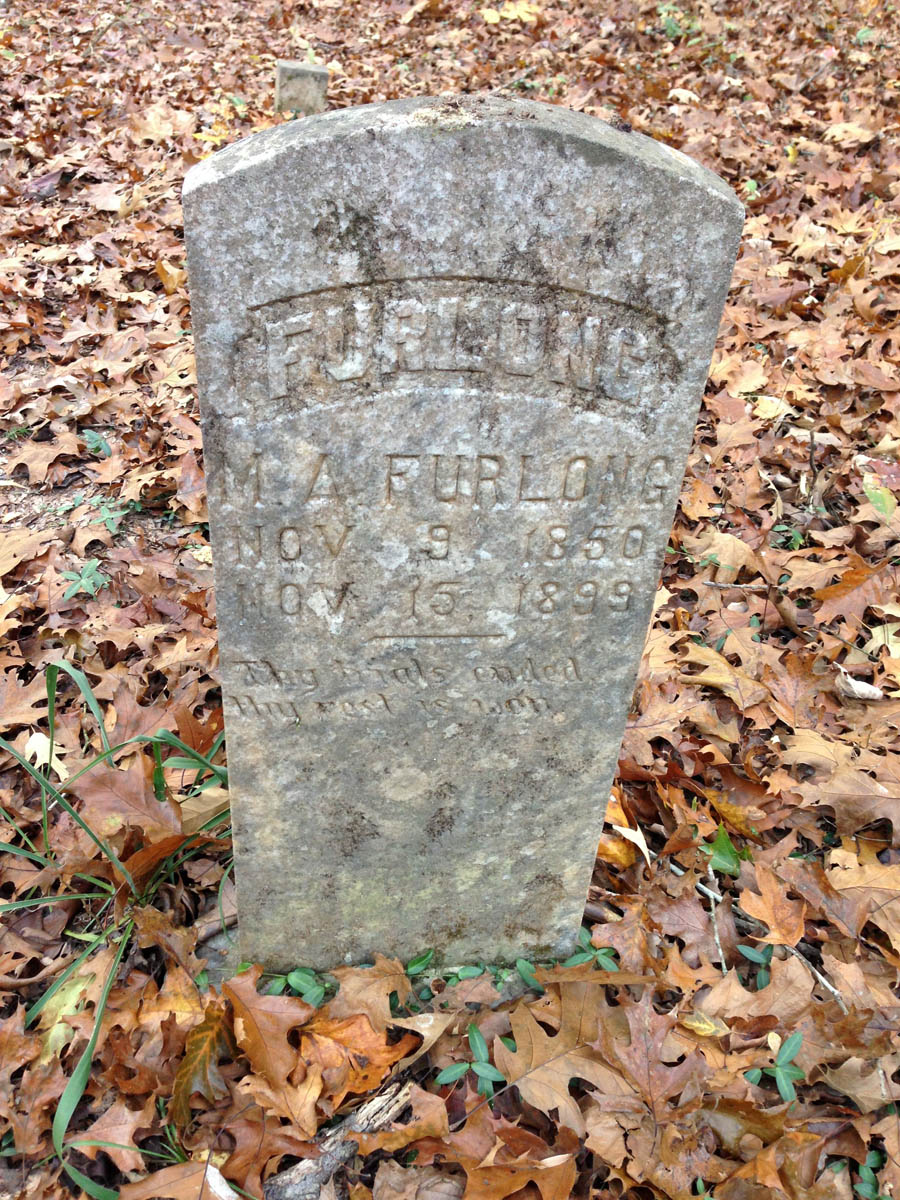 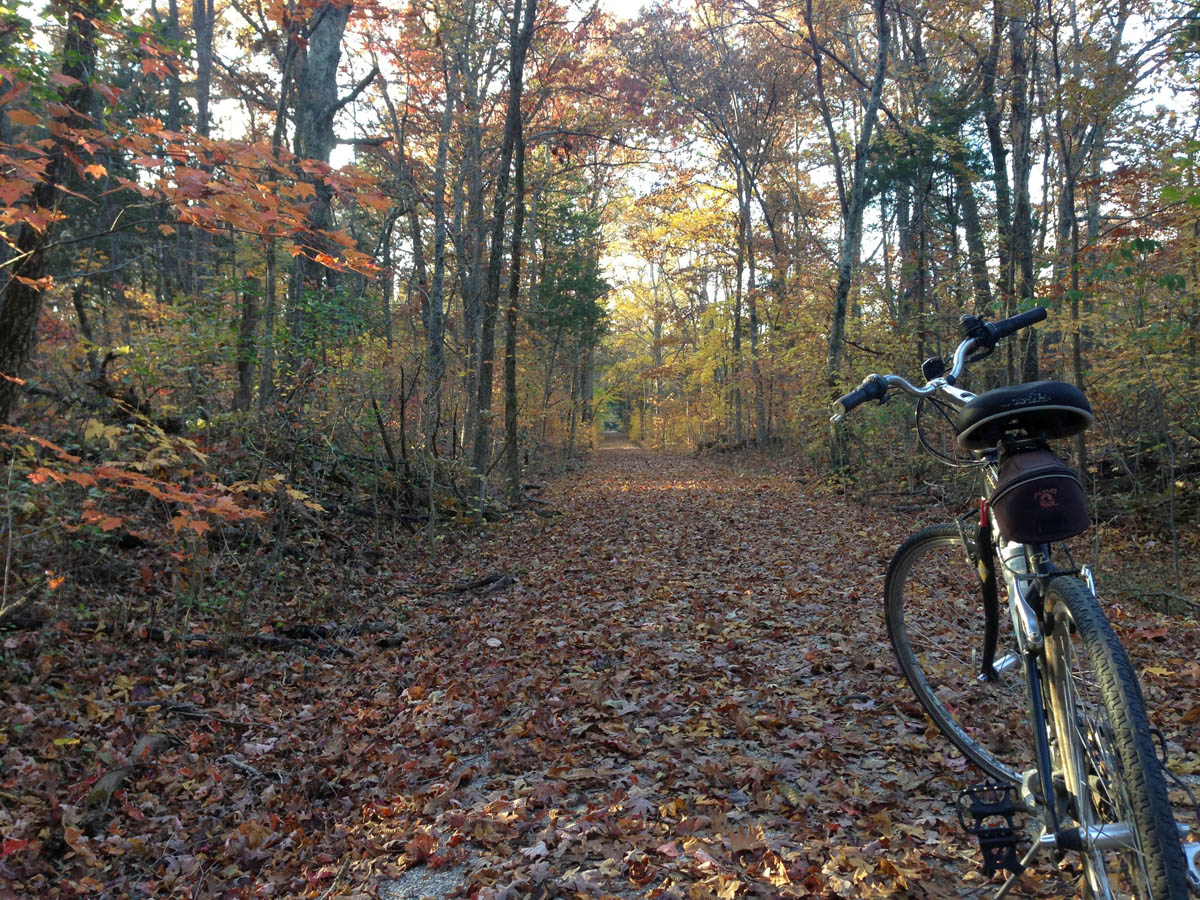 The third day, the iphone app said “possible drizzle.”    What harm can come from a little drizzle, right?   I was determined not to have my rail trail goal derailed by a little drizzle!   I knew I was in trouble as I headed out on this, the third of four segments of the trail, when I never got out of “coast mode” for the first half hour.   As I turned to head back uphill where I had parked the Tracker, the skies decided to laugh in the face of my iphone app, as the “drizzle” turned to downpour.   If you have never experienced riding uphill through a foot of wet, soggy leaves, wearing only what felt like a windbreaker in a washing machine, I cannot recommend it.   I could not stop the steady stream of rapid-fire curse words coming from my mouth to rival the sound of the shots fired from the automatic weapon heard simultaneously echoing from across the woods.

The fourth and final day arrived, and I was determined to complete the 18 mile stretch.   It was a quintessential fall day with the sun shining through the russet-colored trees, and blue, cloudless sky overhead.  As I rolled into nearby Park City, the terminus for the trail, making my “victory lap” around Bell’s Tavern Park felt just as sweet as if I had done the entire ride in only an hour….and probably a whole lot more beautiful.

“Adopt the pace of nature:  her secret is patience.”  ~Ralph Waldo Emerson 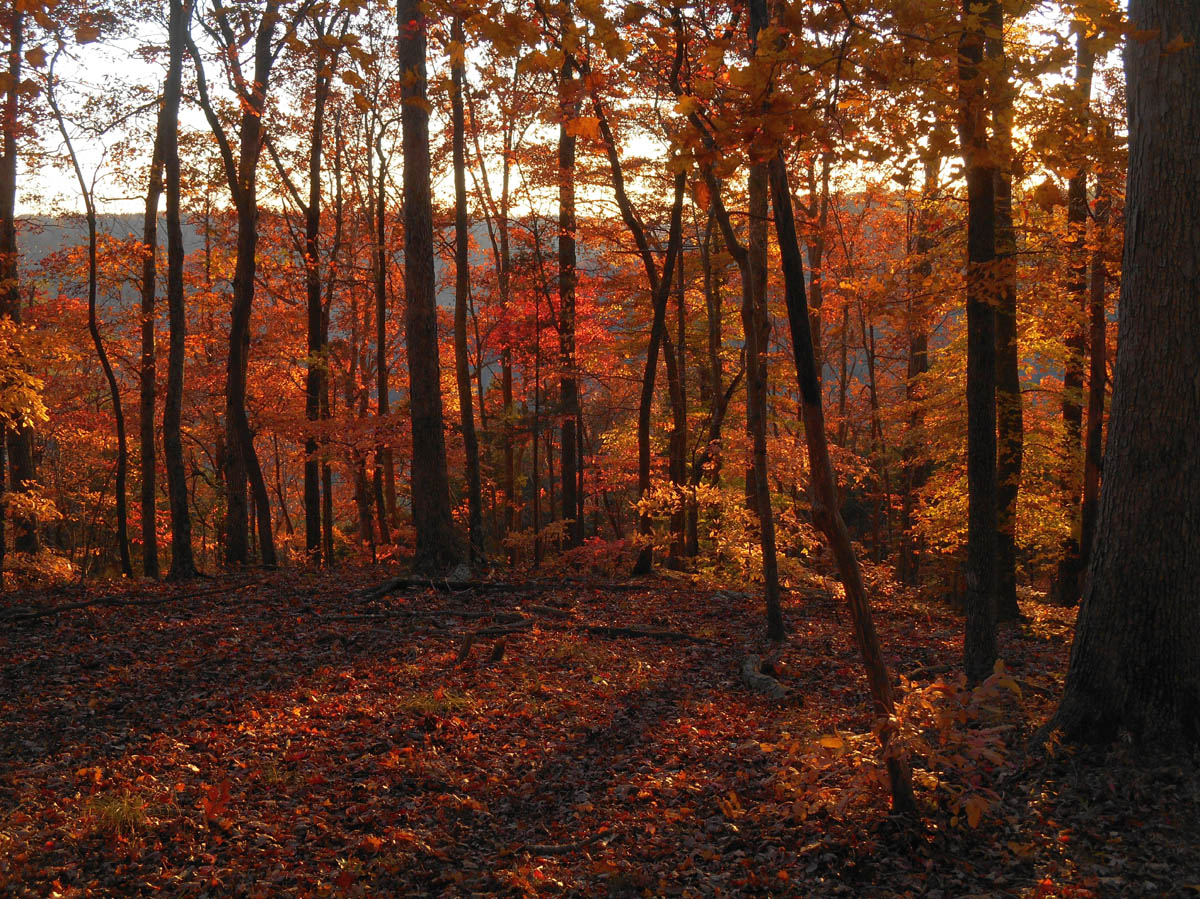 8 thoughts on “Life in Cave City”