First of all, may I just say that the 18-wheelers on I-40 between Nashville and Little Rock are the meanest junk yard dogs in the yard!   It doesn’t matter how fast you keep up, or how slow they are entering the entrance ramps, they are going to run you over without so much as a sideways glance.

To make matters worse, I was kicked out of the Walmart parking lot in my pajamas at 11:00pm by Security, after I had asked and been granted permission to park overnight.   (Feedback sent to both overnightrvparking.com and the Allstays app!) After swilling down a large glass of wine with dinner, I now had to get dressed, stow my rig, and drive to the Flying J at the intersection of I-40 and Hwy 55 to find a space to sleep amongst the truckers, after jockeying for position among them on the road all day! 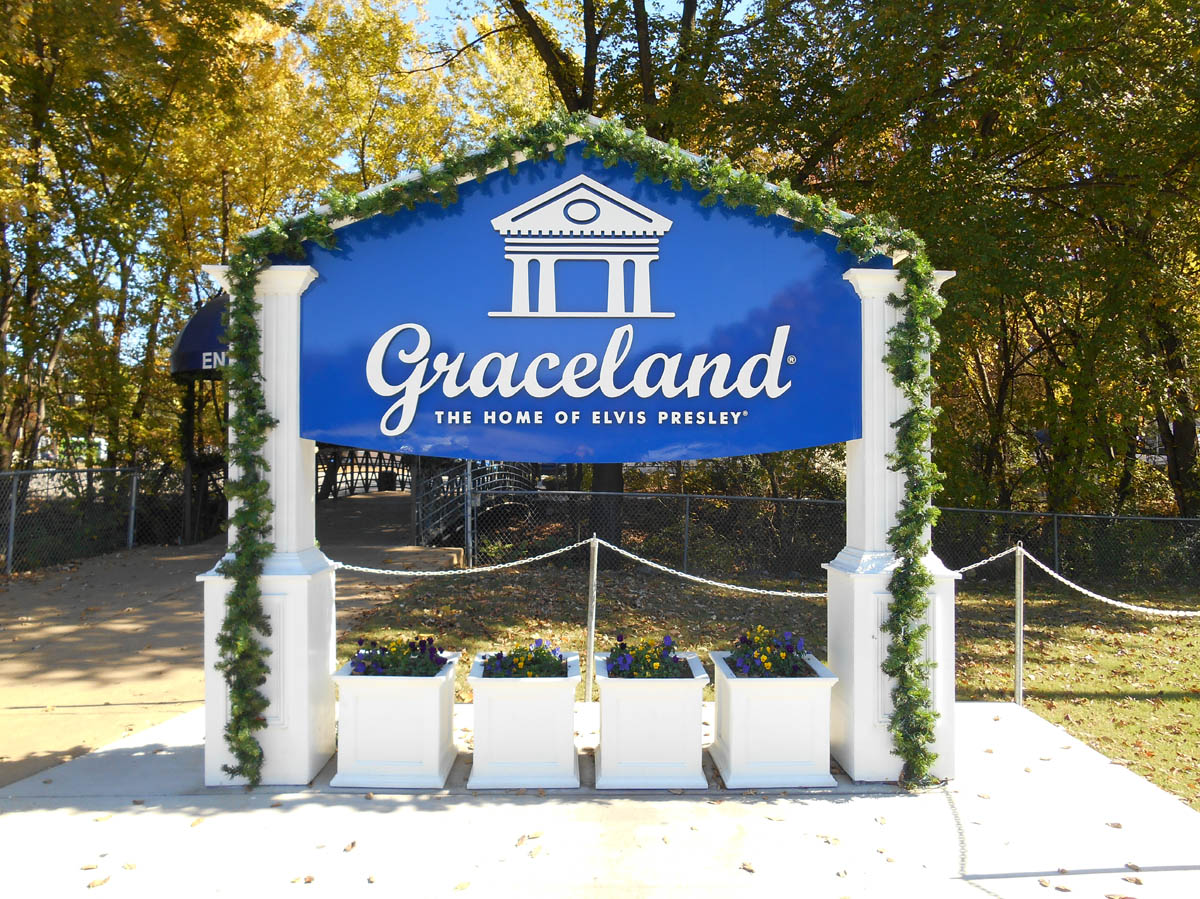 ”When in Memphis”…..there are just some things you gotta do, right?

I never was much of an Elvis fan.   When I developed my strong love for music at the ripe old age of 10 years old, Elvis seemed like an old man to me.  I was in love…deep, crazy love…with a much younger man from the UK, part of a fab foursome.   With my “I Love Paul!” badge prominently displayed on my cork bulletin board, I used to dream that he would come to my family home to seek refuge from his screaming fans.   So there was nothing about Elvis, from his skinny quivering leg to his fat, mutton-chop sideburns that I found appealing.  Give me the long-haired boys from the British Invasion any day!

But given that my RV compass is pointed in a westerly direction, I figured this might be my last chance for a while to see what all the fuss over “The King” was about.  What I saw surprised me in many ways…. 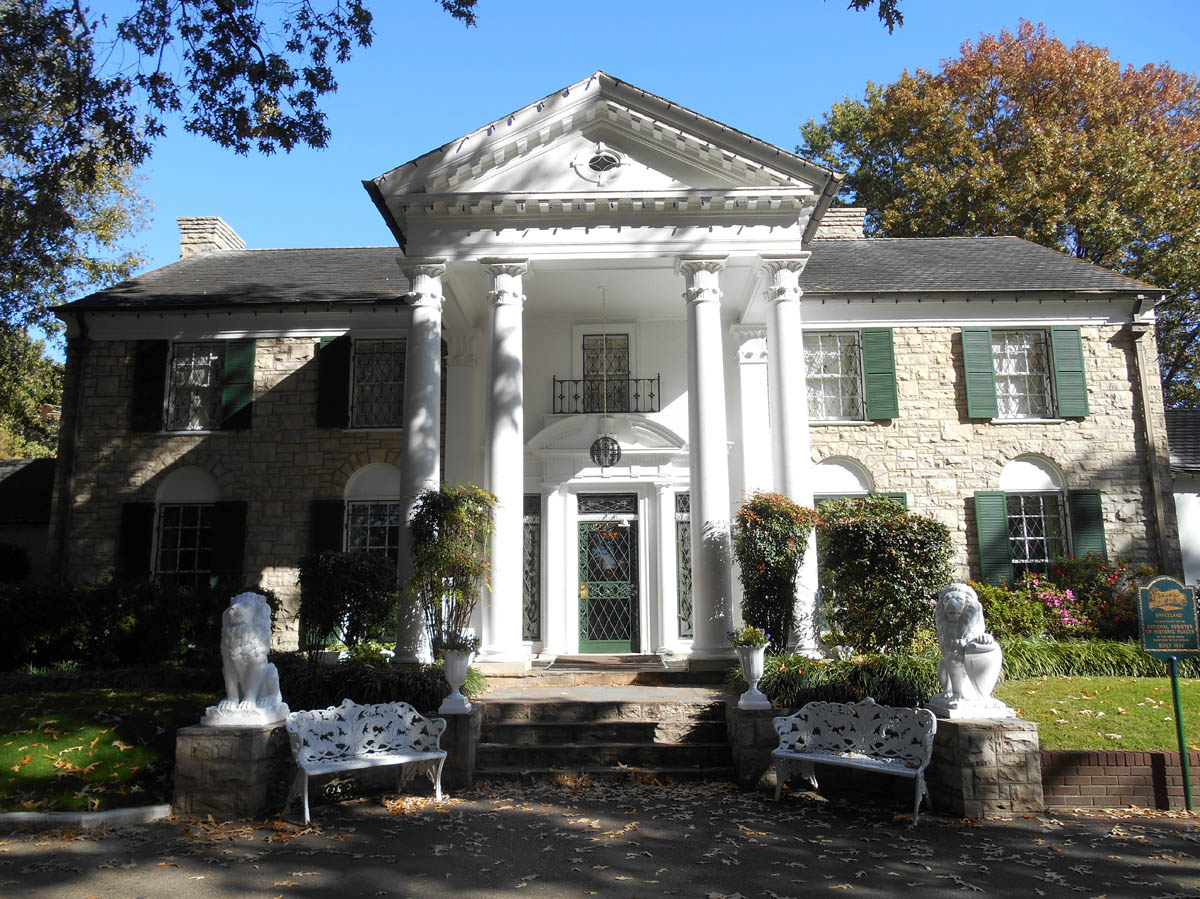 My first impression was what a shoddy part of town this “mansion” was located in, with boarded up buildings, questionable characters hanging around, and signs of neglect in the surrounding blocks.   I hope they donate some of the exorbitant $33 price of admission to spiff up the place a bit! 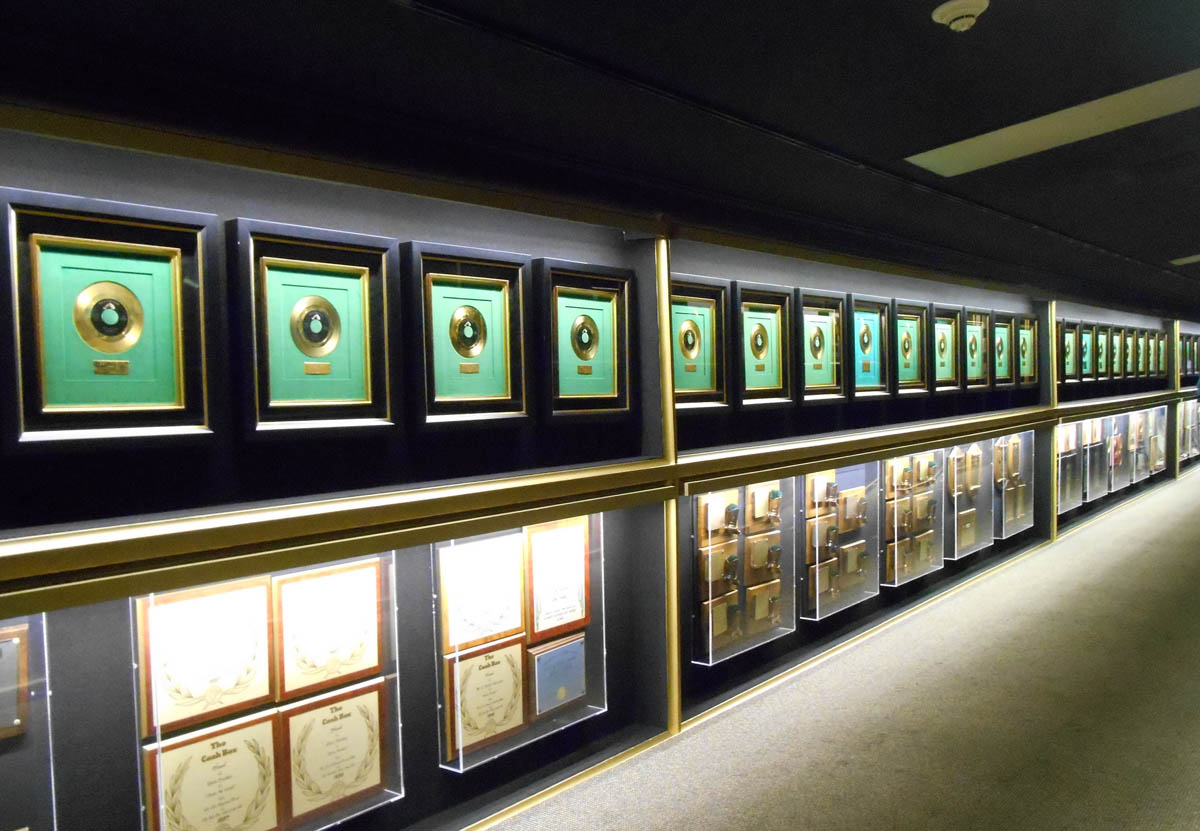 One room in the “Trophy Building”

Equally surprising was the quality of exhibits and eateries within the complex.   Given the multi-cultural crowds, I would have expected something along the lines of a Disney production.   Instead, they were a bit run down, all with the exception of the gift shops, where there was enough “Elvis” inscribed items to fill an Amazon warehouse.    The restaurant offered Elvis’s favorite dish, a grilled peanut butter and banana sandwich. As unappetizing as that sounds, it had to be an improvement over the worst hamburger I have ever eaten….along the lines of prepackaged, cold airline food. 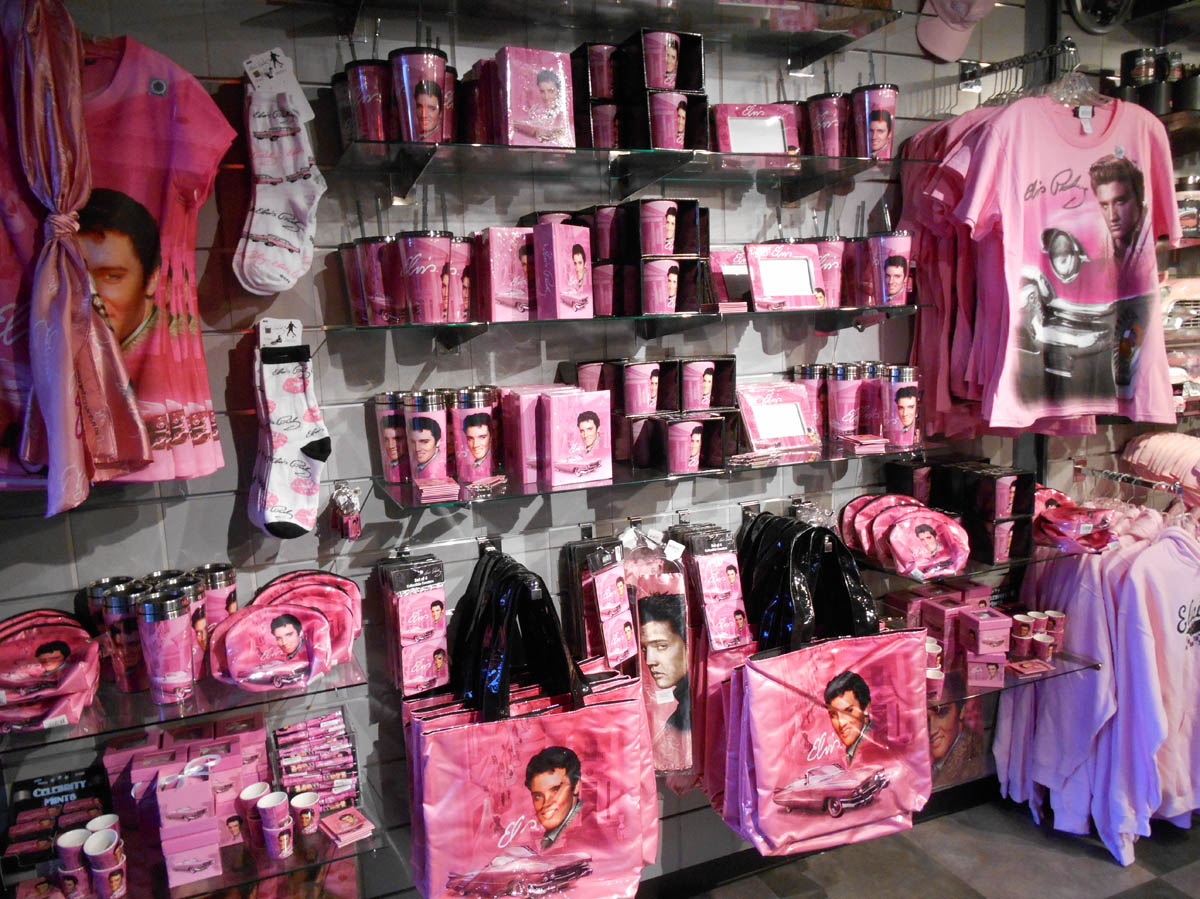 Each exhibit had its own gift shop. This one went with the “Pink Cadillac” in Elvis’ Car Museum 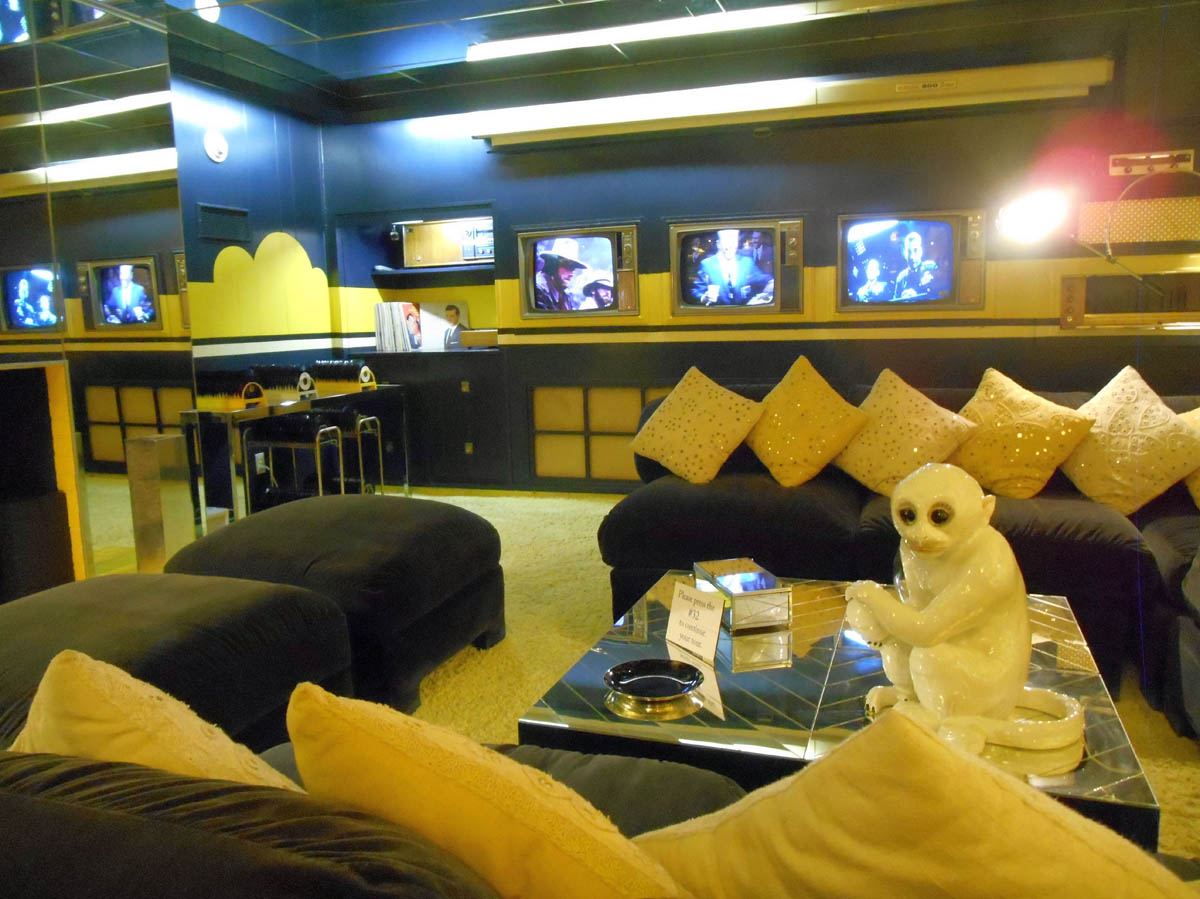 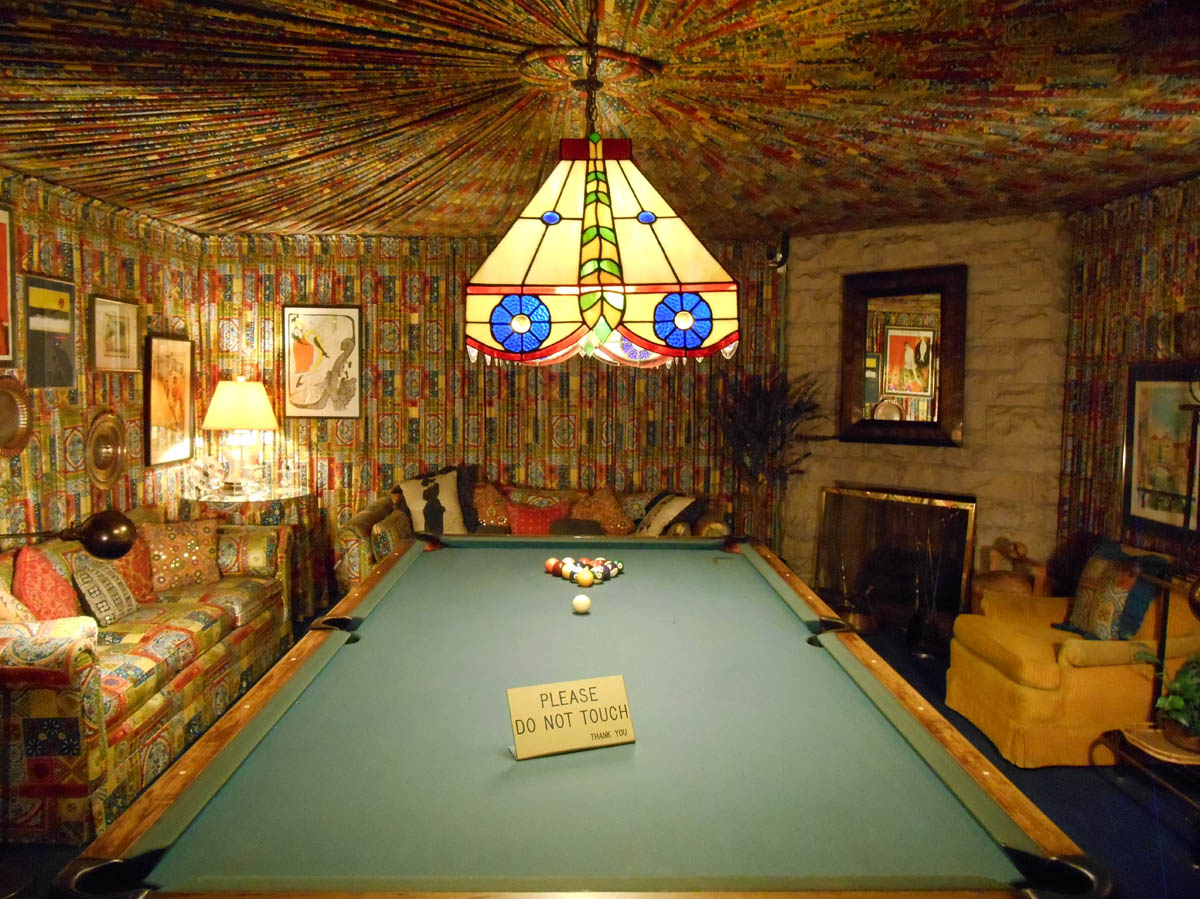 It was also interesting to note how modest “The King” lived by comparison to most super-star standards today.  Even considering the 15 ft long white sofa in the livingroom and the indoor waterfall in the makeshift recording studio, the “Jungle Room,” his surroundings still didn’t seem proportionate to his legendary status.    I expected “palatial,” but it really was a house of only slightly above-average means.    Were the peacock stained glass windows or the avocado green shag carpeting that covered both the floor and ceiling typical of a “mansion” back in that day?   I found myself wishing I could teleport back to the 70’s so I could more fairly gauge if it really was as downright tacky as it seemed to me now. 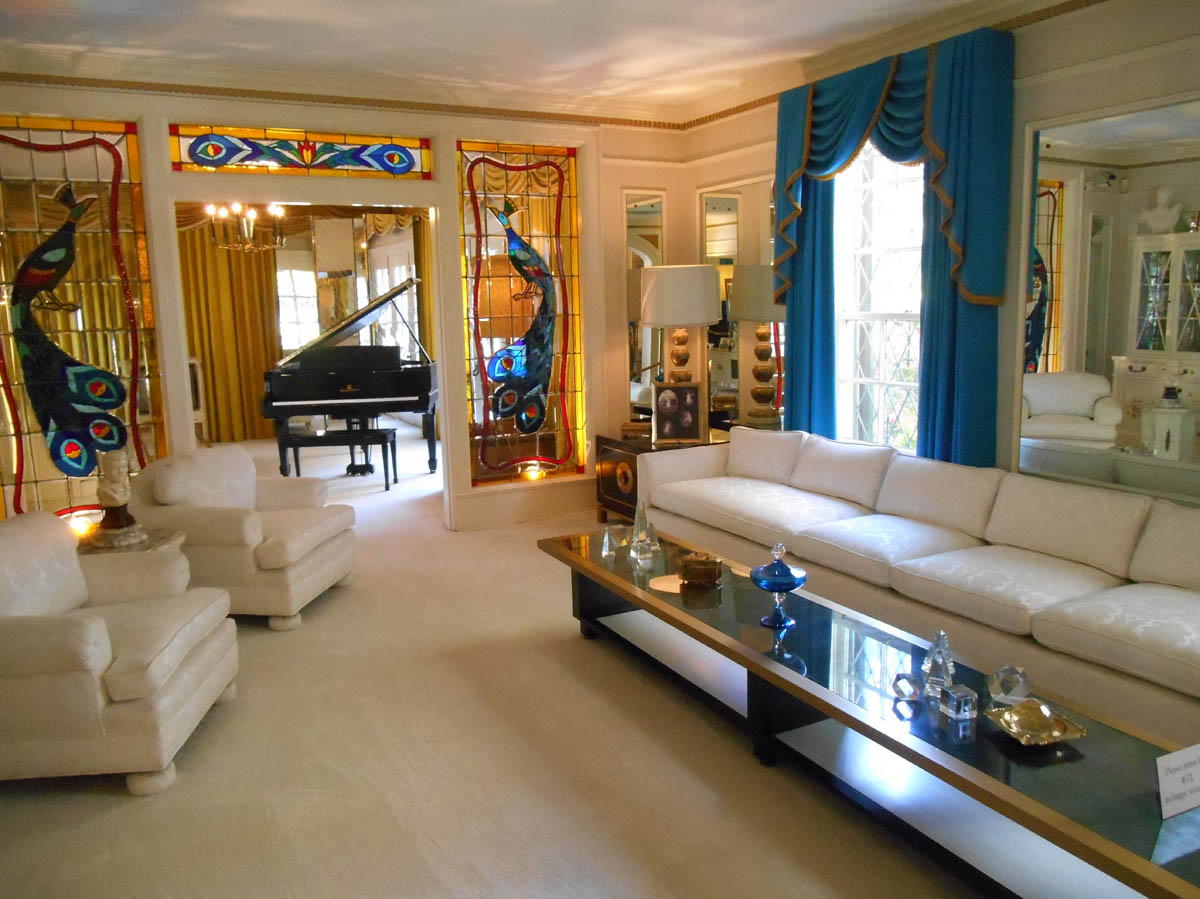 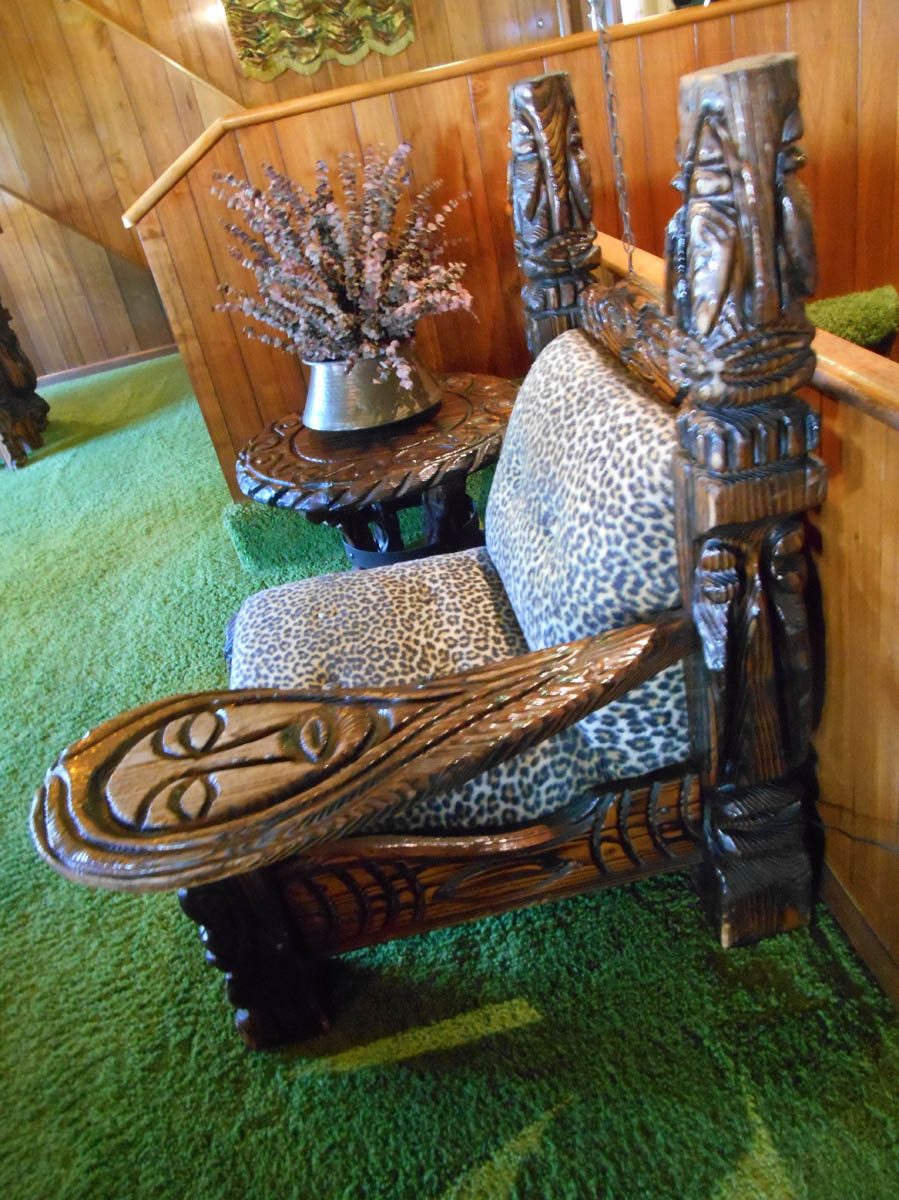 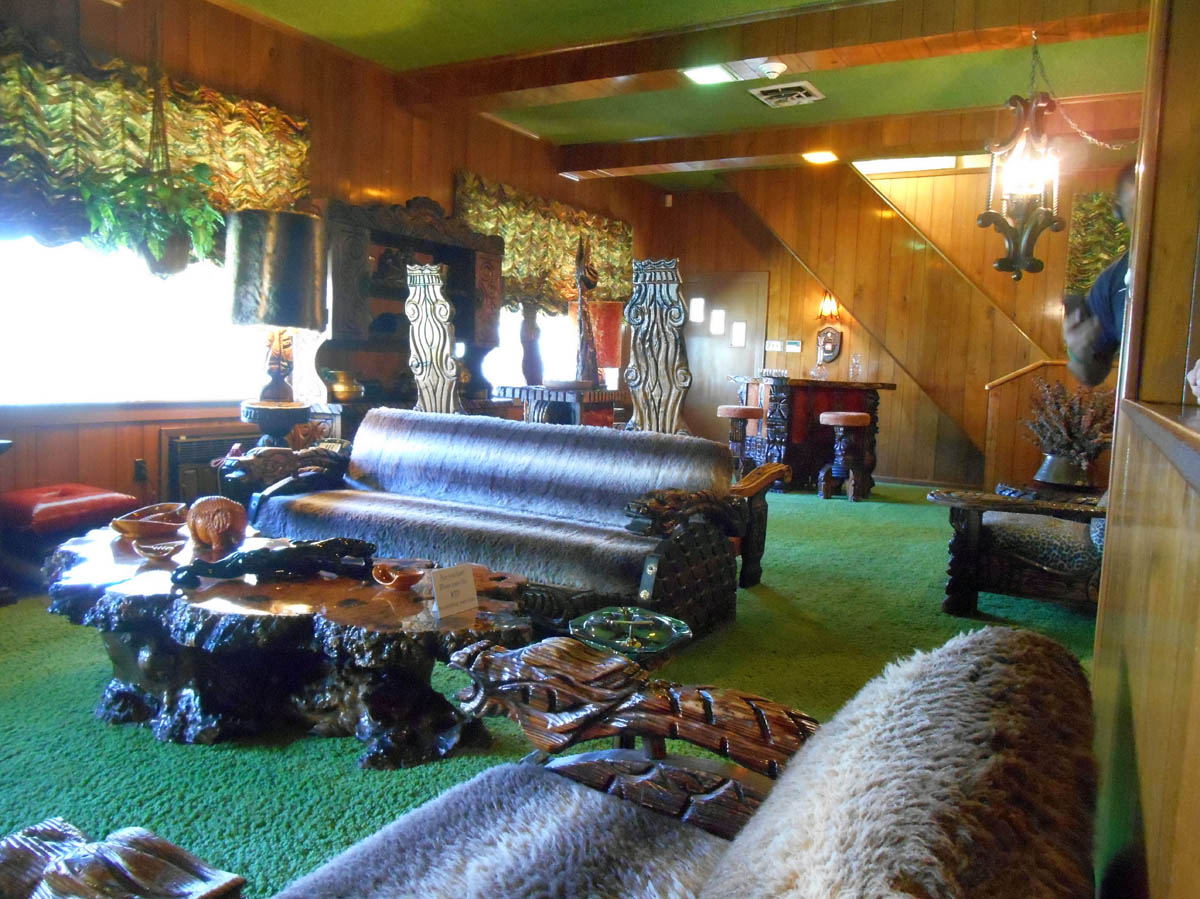 The “Jungle Room” where Elvis’ last two albums were recorded

A tour through the exhibits had me wondering just HOW MANY “jumpsuits” can one guy own??  They just went on, from building to building….many of identical threadwork designs, but in different thread colors;  powder blue, black, red. ….most on an off white background.   And then there were the “studded” ones!   These elaborate jumpsuits must have made the “Bedazzler” as famous as Elvis himself! 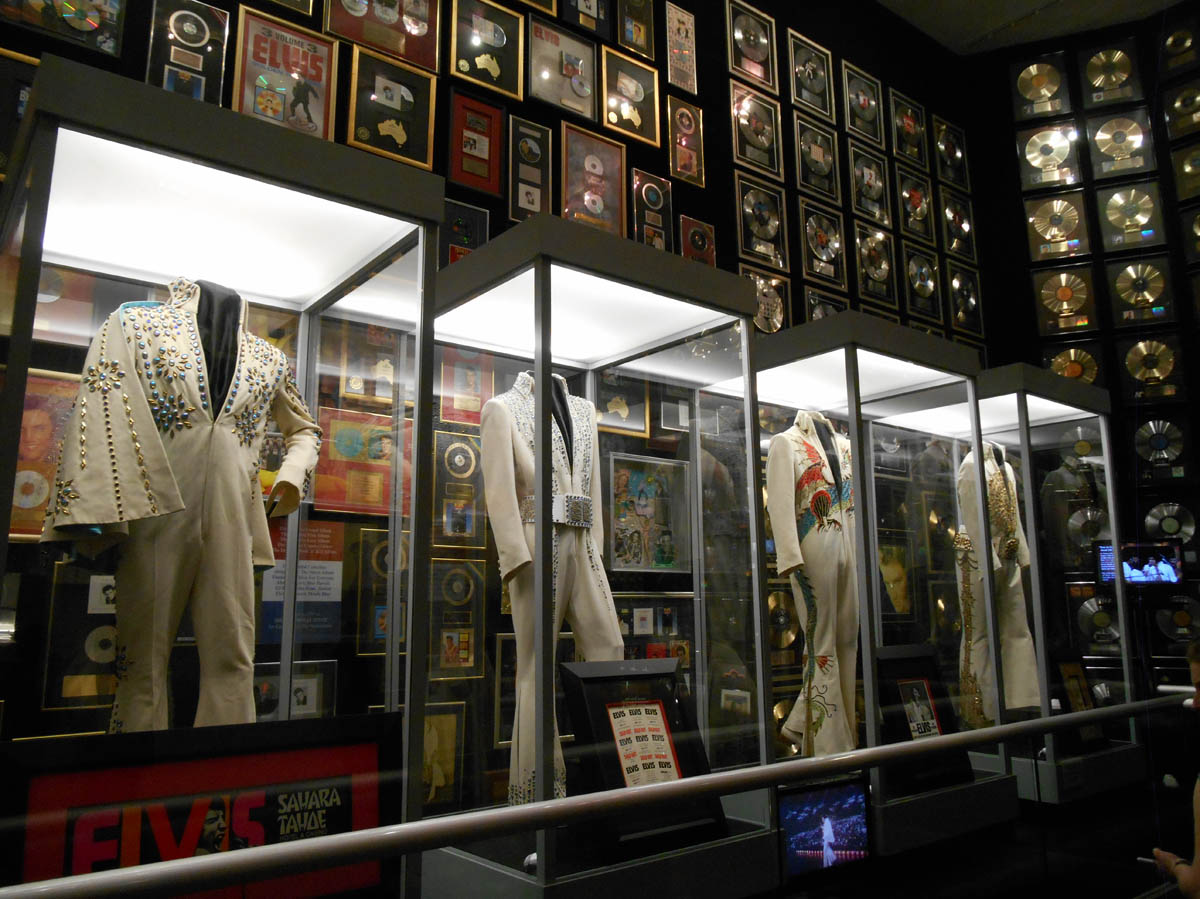 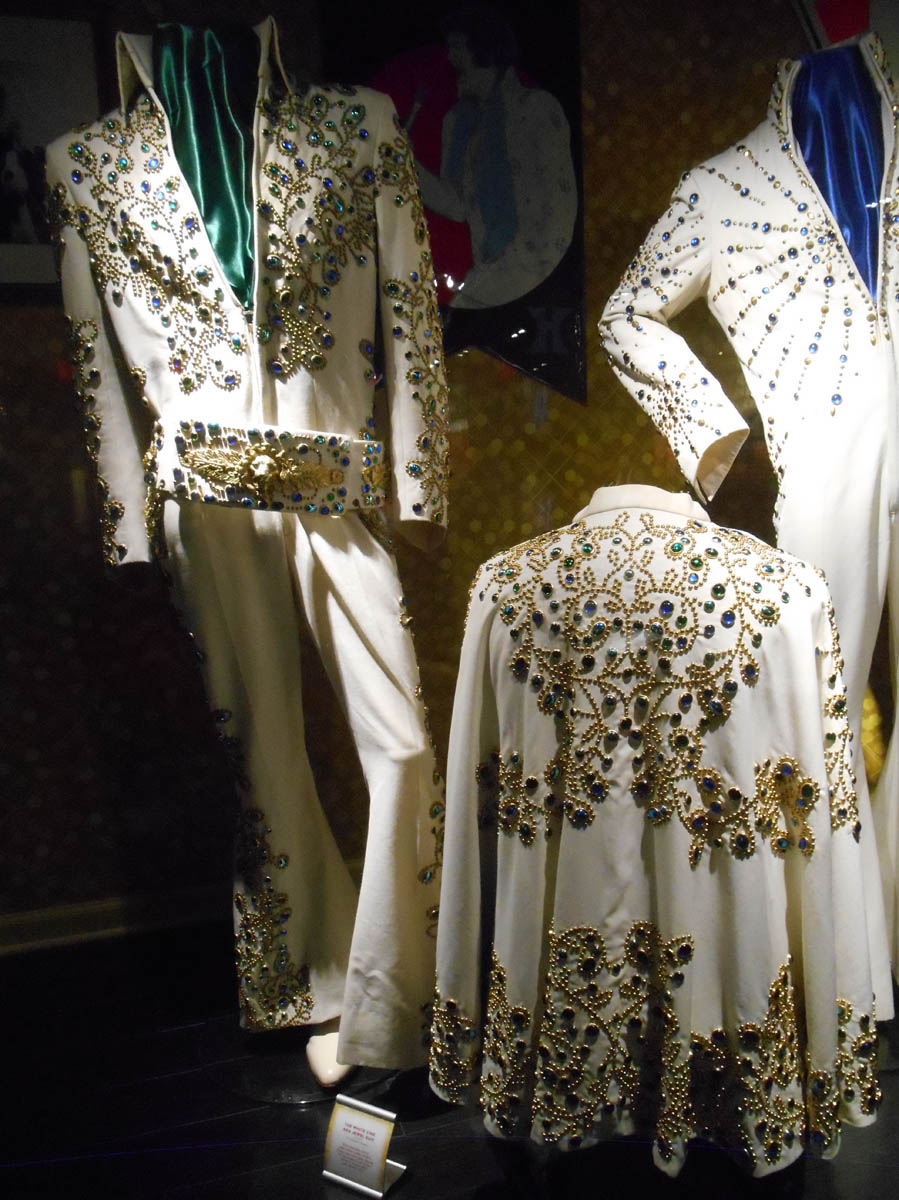 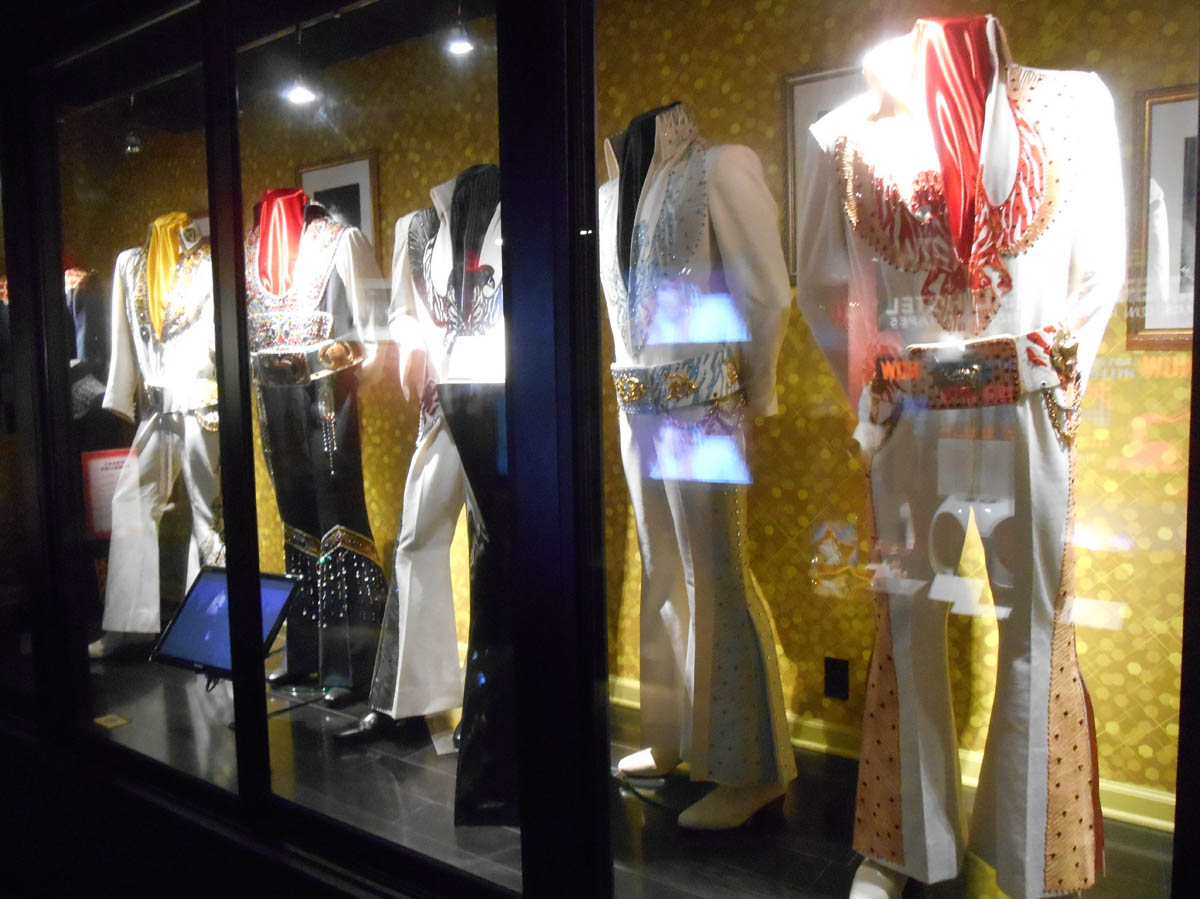 Across the street is Elvis’s Car Museum, which offered up a few surprises of its own.  Unlike the stealth transportation for the rich and famous today, Elvis was pretty “out there” with his 30 wild automobiles, including a pink and white striped Jeep, a few Stutz Blackhawks, Rolls Royces, and pink and purple Cadillac’s.  It would appear that he had more money in his car collection than in the “mansion.” 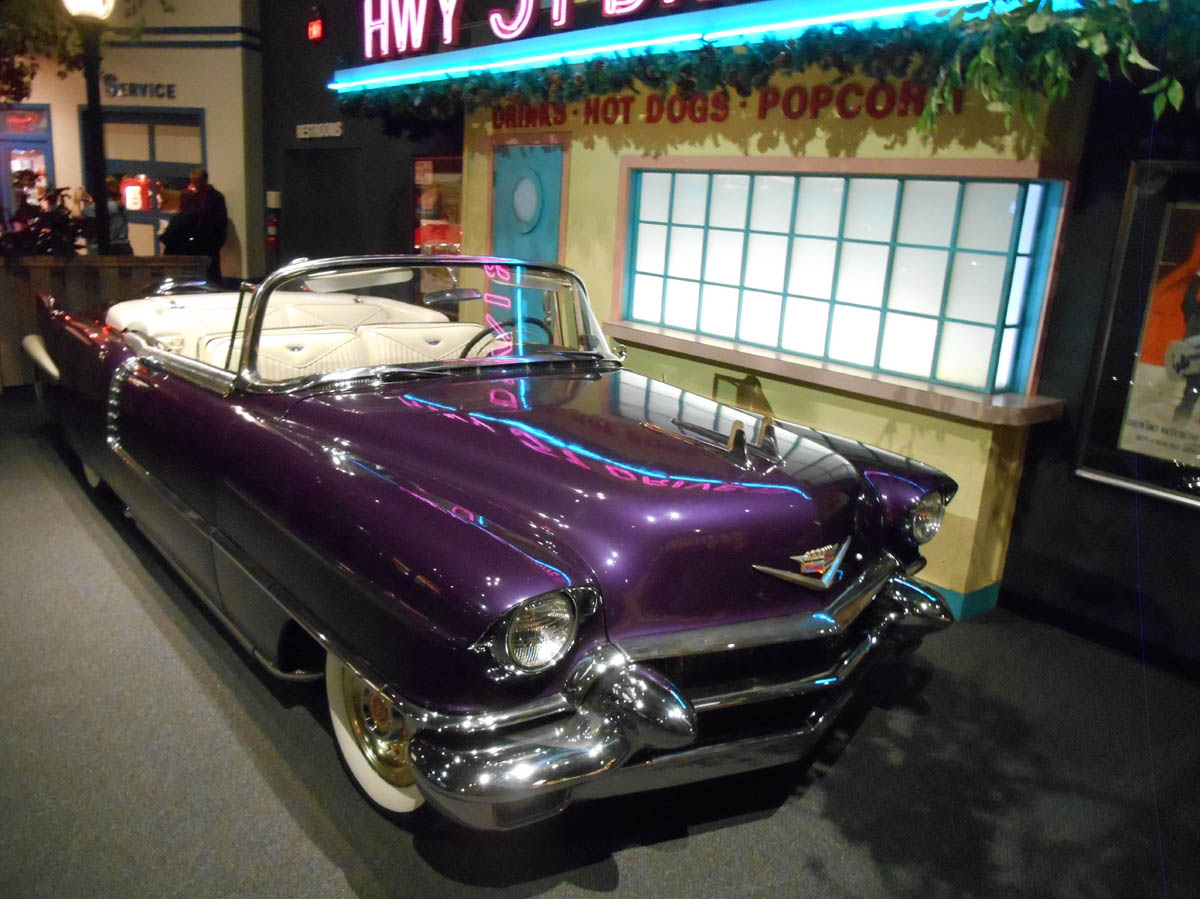 His Convair Jet and Lockheed JetStar weren’t exactly in the stealth mode either, with names like “Lisa Marie” and “Hound Dog” emblazoned across the nose.    Supposedly, he flew Lisa Marie on the “Lisa Marie” to Colorado when he realized she had never seen snow… 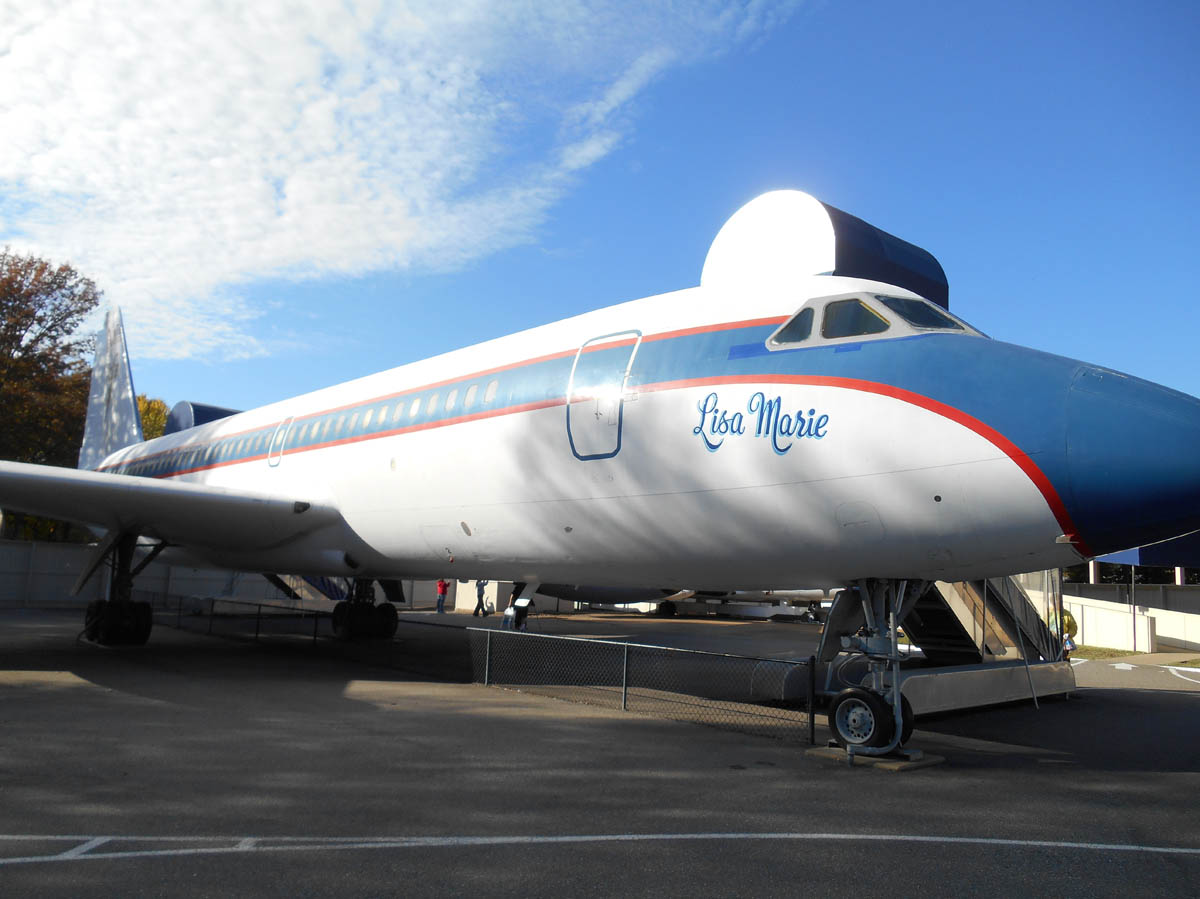 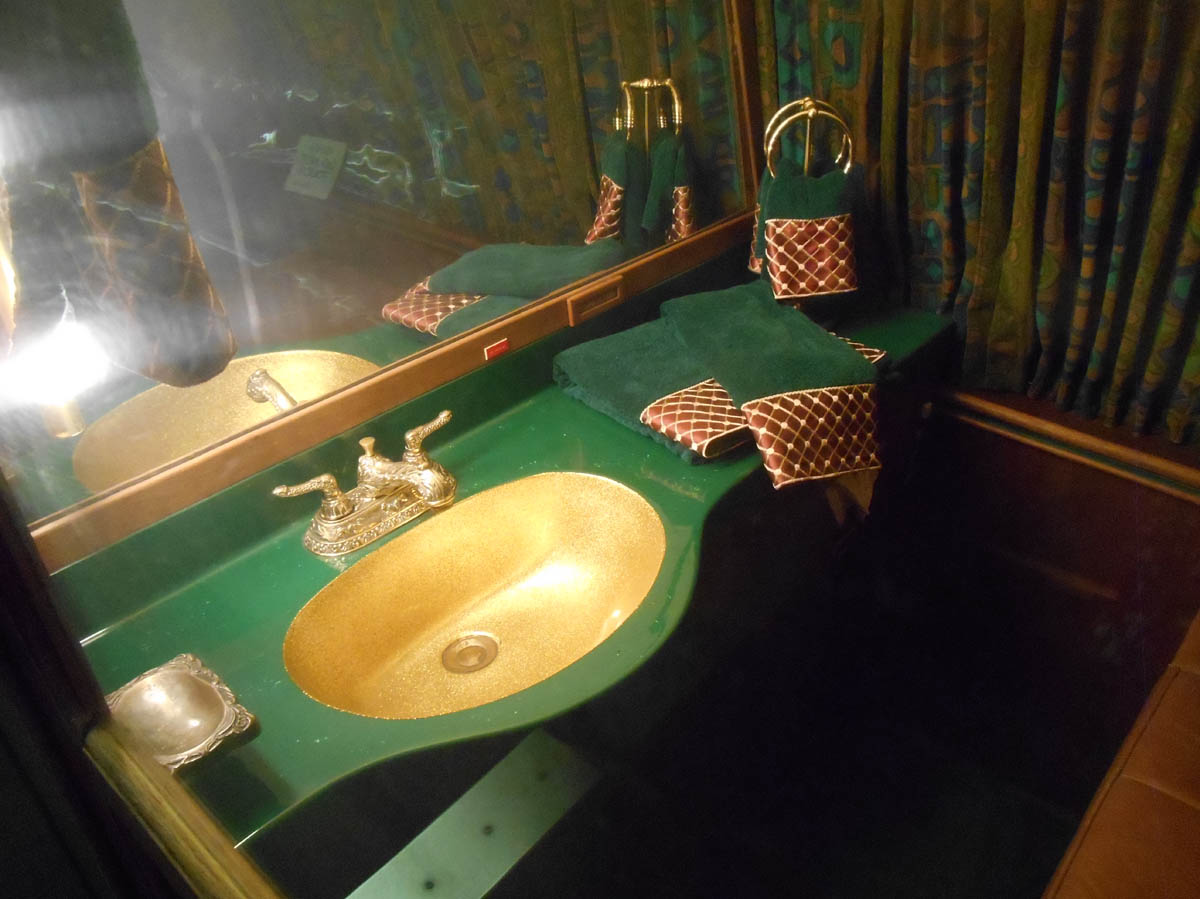 Gold-flecked sink inside the “Lisa Marie”

Elvis is buried in the back yard, in his “meditation garden.”  This came as a surprise to me also, with all the crazy stories about Elvis sightings and still being alive today, I would have expected the gravesite to be a little more secure…or at least a little more obscure. 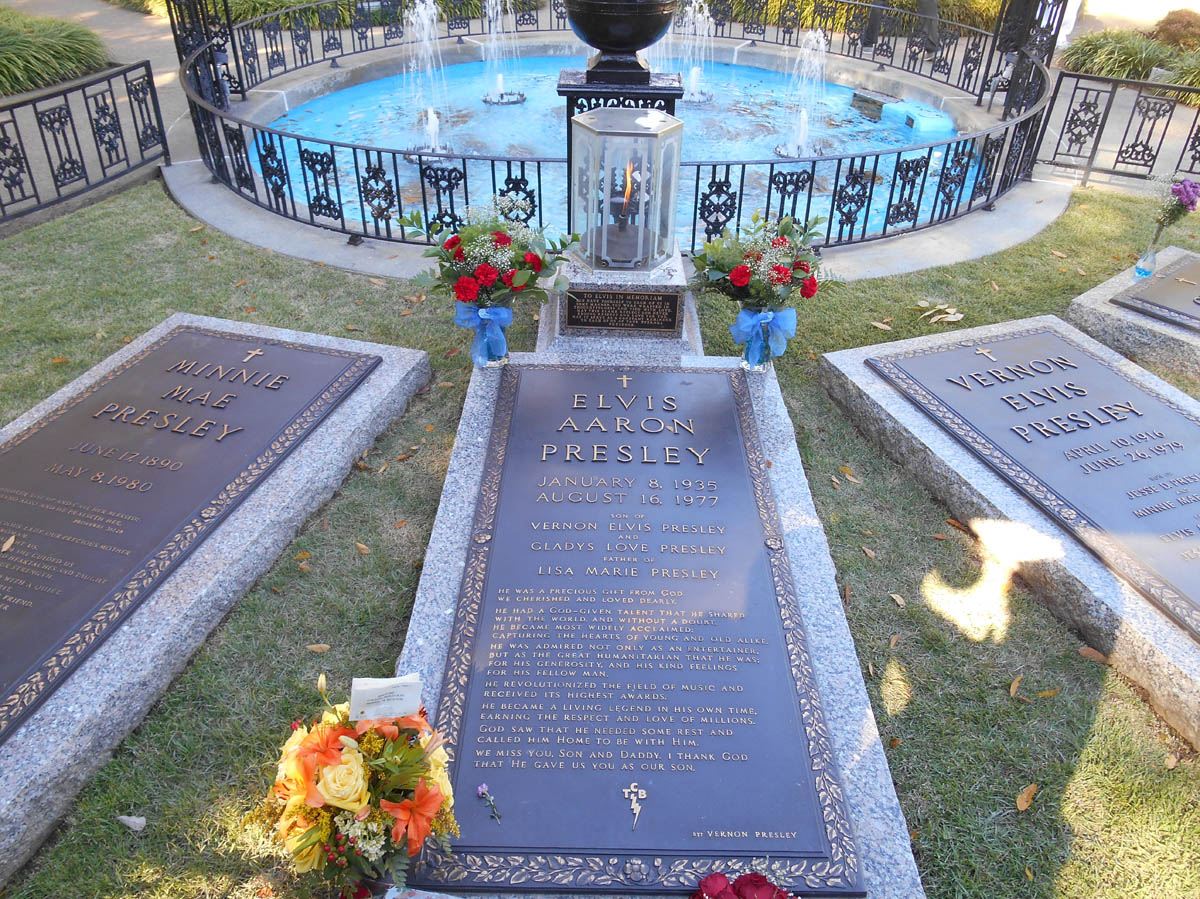 The upstairs of the mansion is completely off limits.   If you even so much as lean toward the staircase leading to the top floor, the guards lean with you.   Supposedly, it is “untouched” since that day in August, 1977 when Elvis died of a heart attack while rumored to be sitting on the toilet.   So it is only understandable that the upstairs be off limits to morbid curiosity-seekers like me.   But I can only imagine, judging from the vivid colors and gaudy décor of the rest of the house, The King must have been sitting on quite a fancy “throne” when “Elvis left the building.”

“In Graceland, in Graceland
I’m going to Graceland
For reasons I cannot explain
There’s some part of me wants to see
Graceland
And I may be advised to defend
Every love, every ending
Or maybe there’s no obligations now
Maybe I’ve a reason to believe
We all will be received
In Graceland”

6 thoughts on “When in Memphis…”