I came to Little Rock a couple of years ago to cross a few things off the “bucket list.”  One, after living in the bordering state of Texas most of my life, I had never once been across the state line to Arkansas.   We as a family always went west on road trips.   Second, I wanted to see the Clinton Presidential Library.   And lastly, I was working off my list of National Parks, and Hot Springs would be an easy target – a triple play over one long weekend.

As I drove across the Arkansas River along I-30 to reach the Clinton Library, I remember seeing an RV Park right alongside the river.   I remember thinking, “If I ever own an RV, I am going to come back here some day and explore that river trail.”  As fate would unfold, not only did I get the “RV of my dreams,” but the owner was in Arkansas!    So it just seemed fitting that I should return here on my trip back through toward Texas for the holidays. 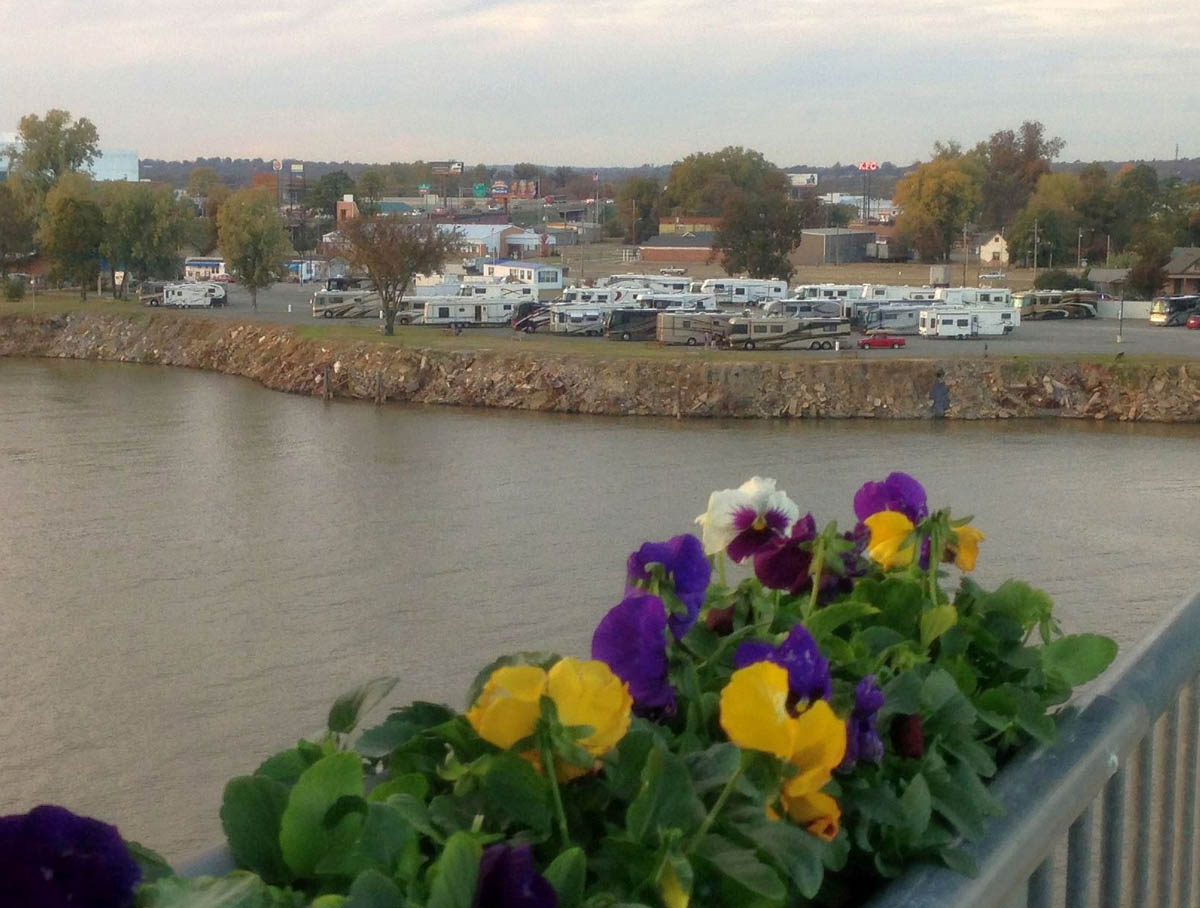 The Downtown Riverside RV Park is owned by the city of Little Rock, and is little more than a gravel parking lot alongside the Arkansas River.   Sites are “slide-to-slide,” but at $19 a night (even lower for 3 nights half price with Passport America) and full hookups, you have to put appearances aside.  This place is all about “location, location, location.” 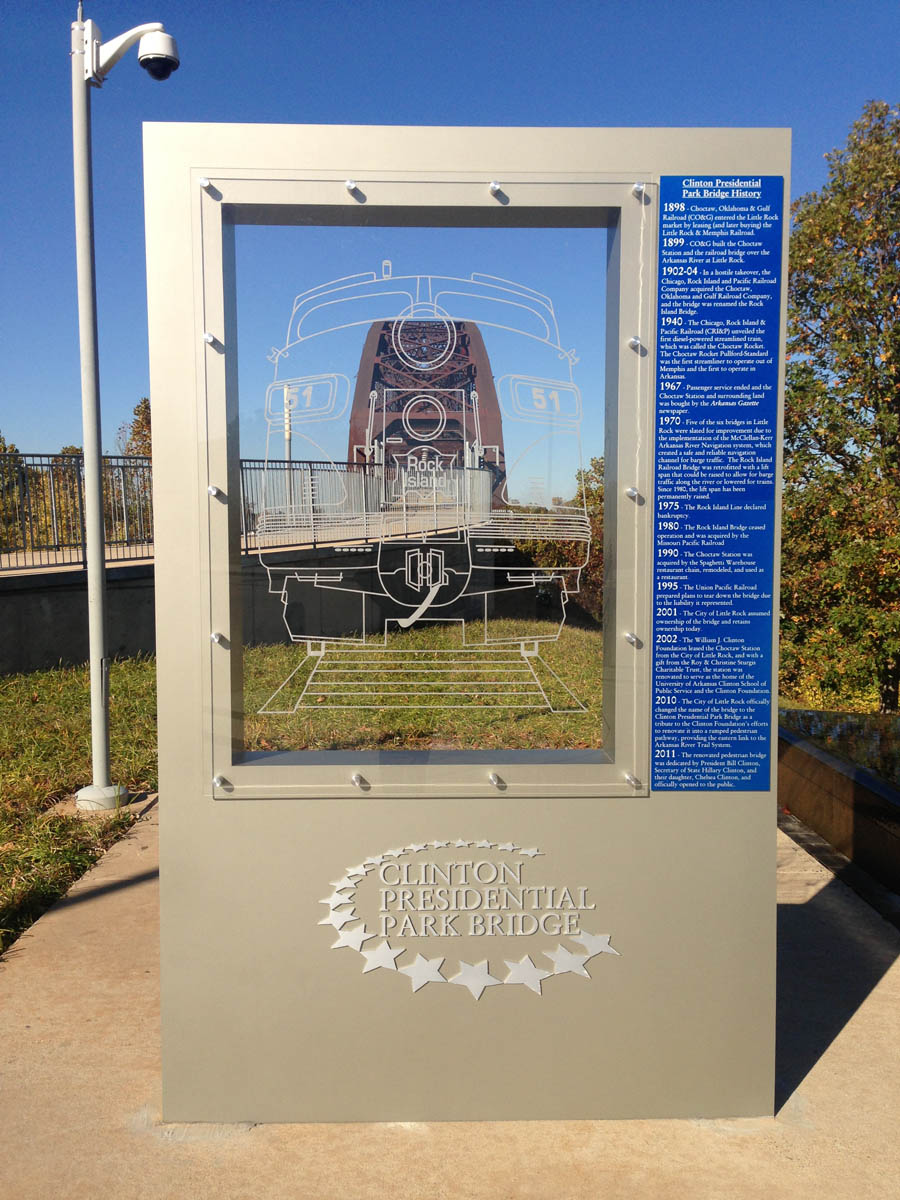 RV Park is at the end of the Presidential Park Bridge, a well lighted old rail bridge, now hike/bike only leading to Clinton Library and downtown.

My last few destinations, really since I left Niagara Falls, have all been in the sticks, with nothing more than a Piggly Wiggly and a few fast food chains nearby, if I was lucky.   So it was great to be back in a place with urban infrastructure for a few days.   I shopped at Whole Foods.  Went to a few movies.  Ate at some nice restaurants.  And traversed the Arkansas River at least once per day, by hike or by bike. 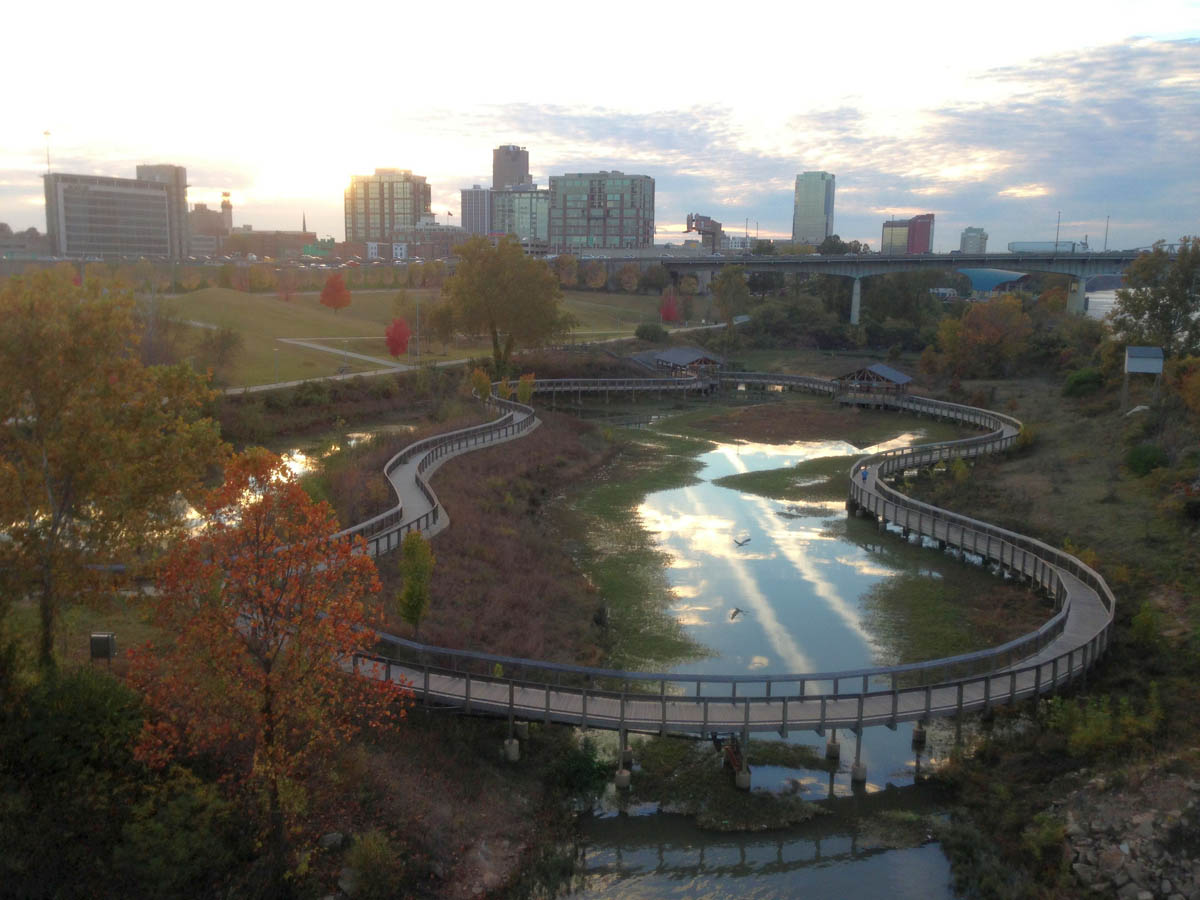 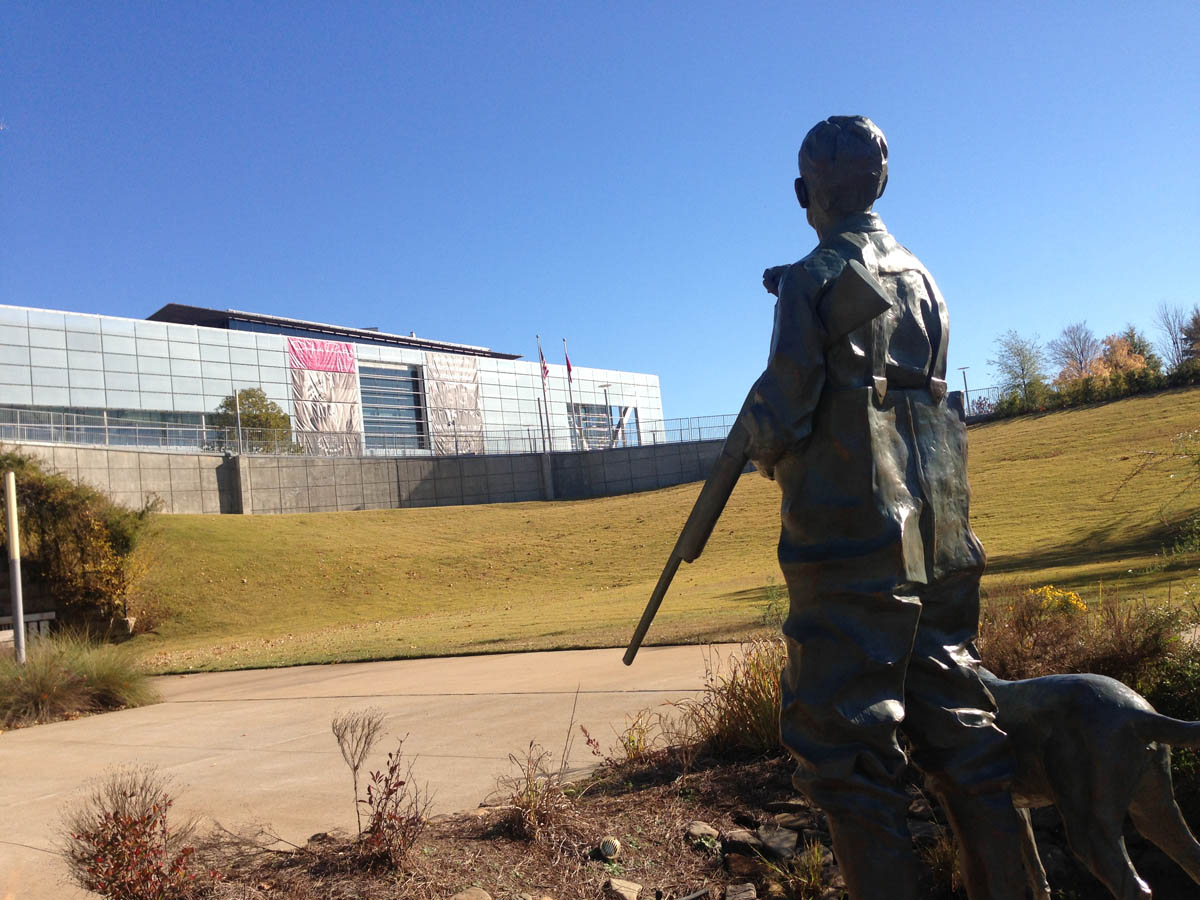 Am I the only one who finds it odd to have a statue holding a rifle pointed toward the Presidential Library? I realize it is a tribute to an Arkansas outdoors-man, but it makes me think of Dick Cheney…

The Arkansas River Trail is the finest urban bike trail I have seen since I left Austin last March.   It literally runs right outside the gates of the Downtown Riverside RV Park, making it possible for me to get in a good hour bike ride very day.   This impressive 88 mile trail alongside the Arkansas River connects 38 parks, with at least four pedestrian-only bridges crossing over the river. 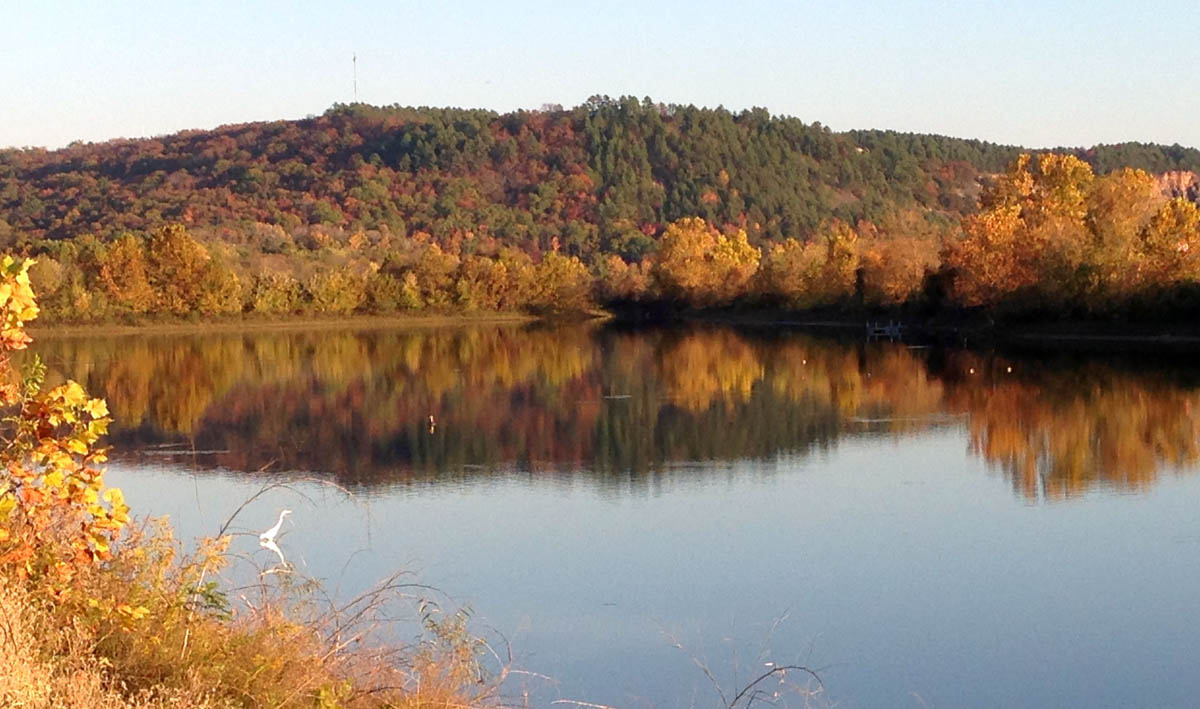 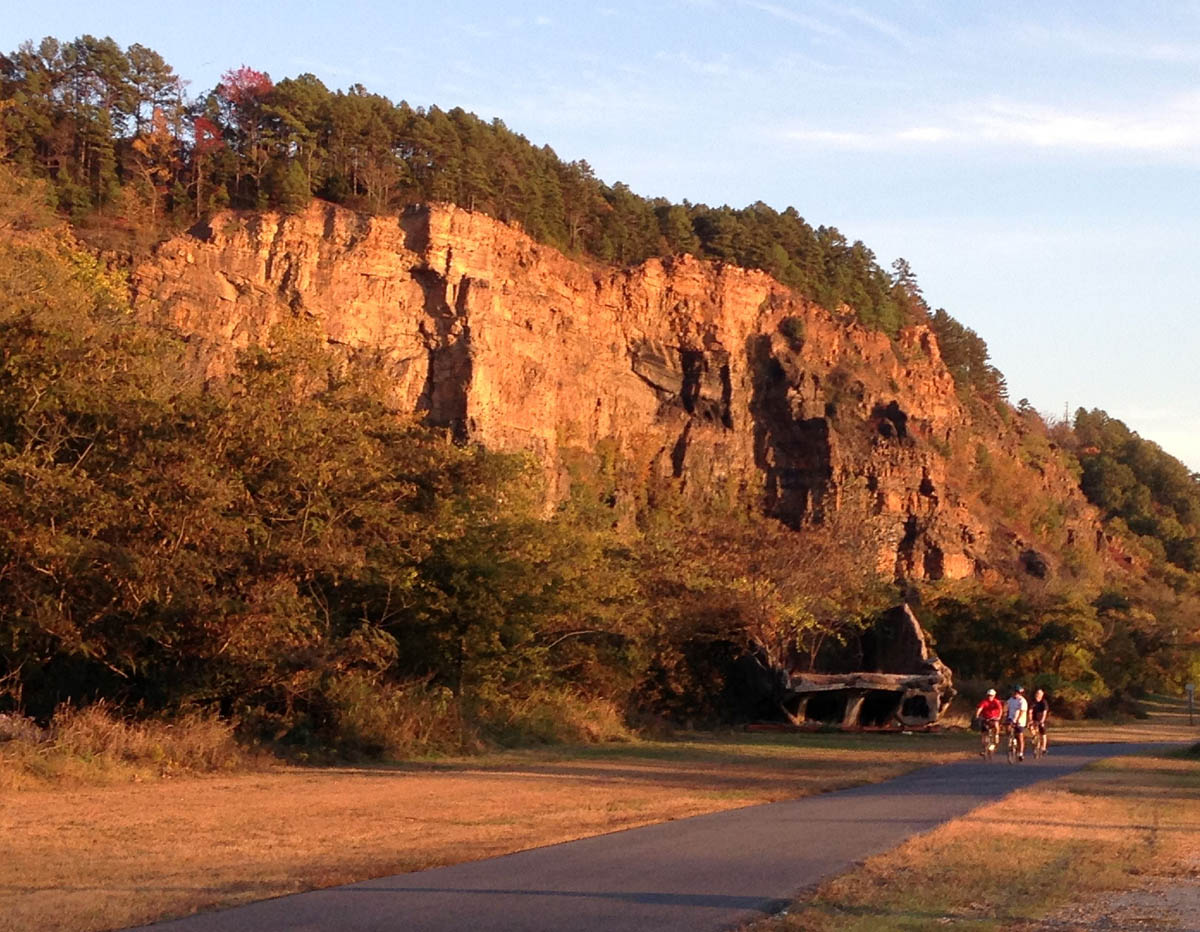 I wish I had time to explore more of the 88 miles, but all my lunch break would allow was the 15 mile loop from the Clinton Presidential Park Bridge to the “Big Dam Bridge,” the longest pedestrian and bicycle bridge in the world, built specifically for that purpose. 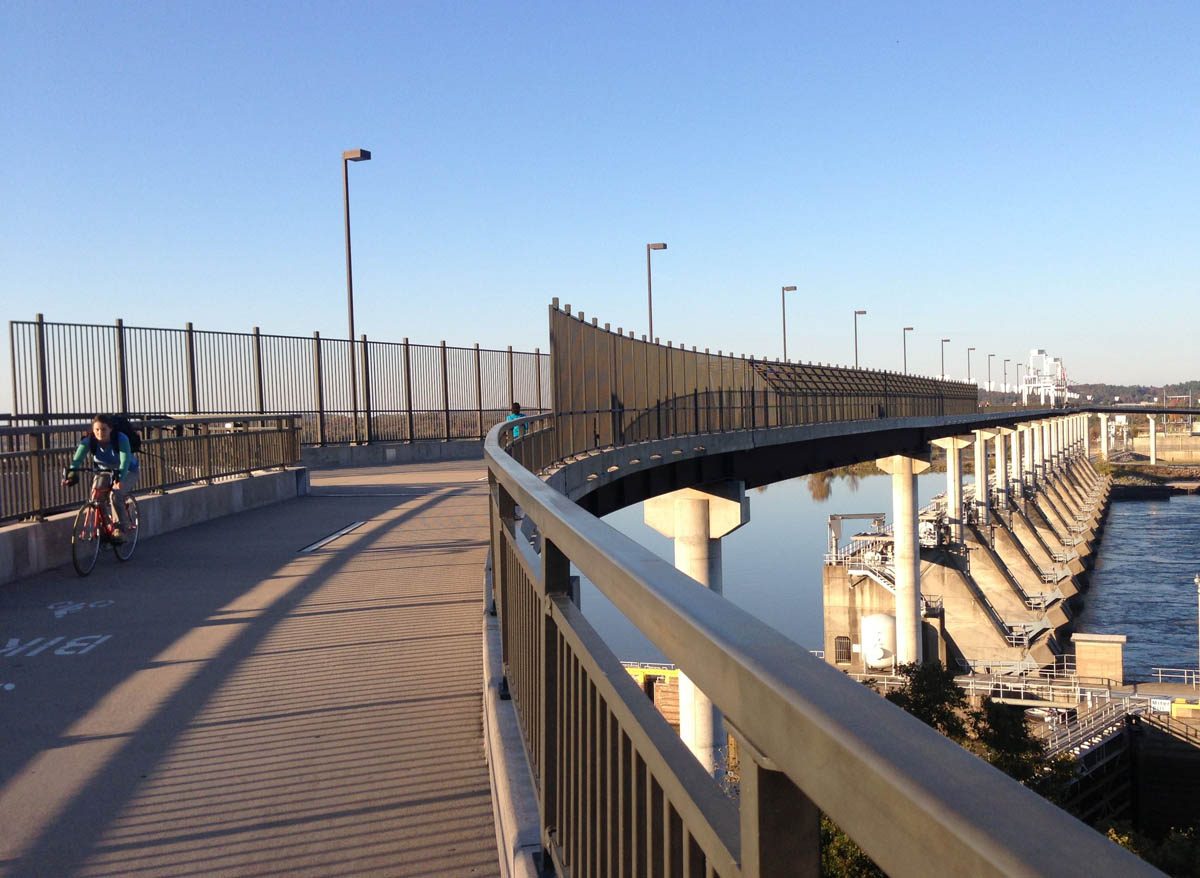 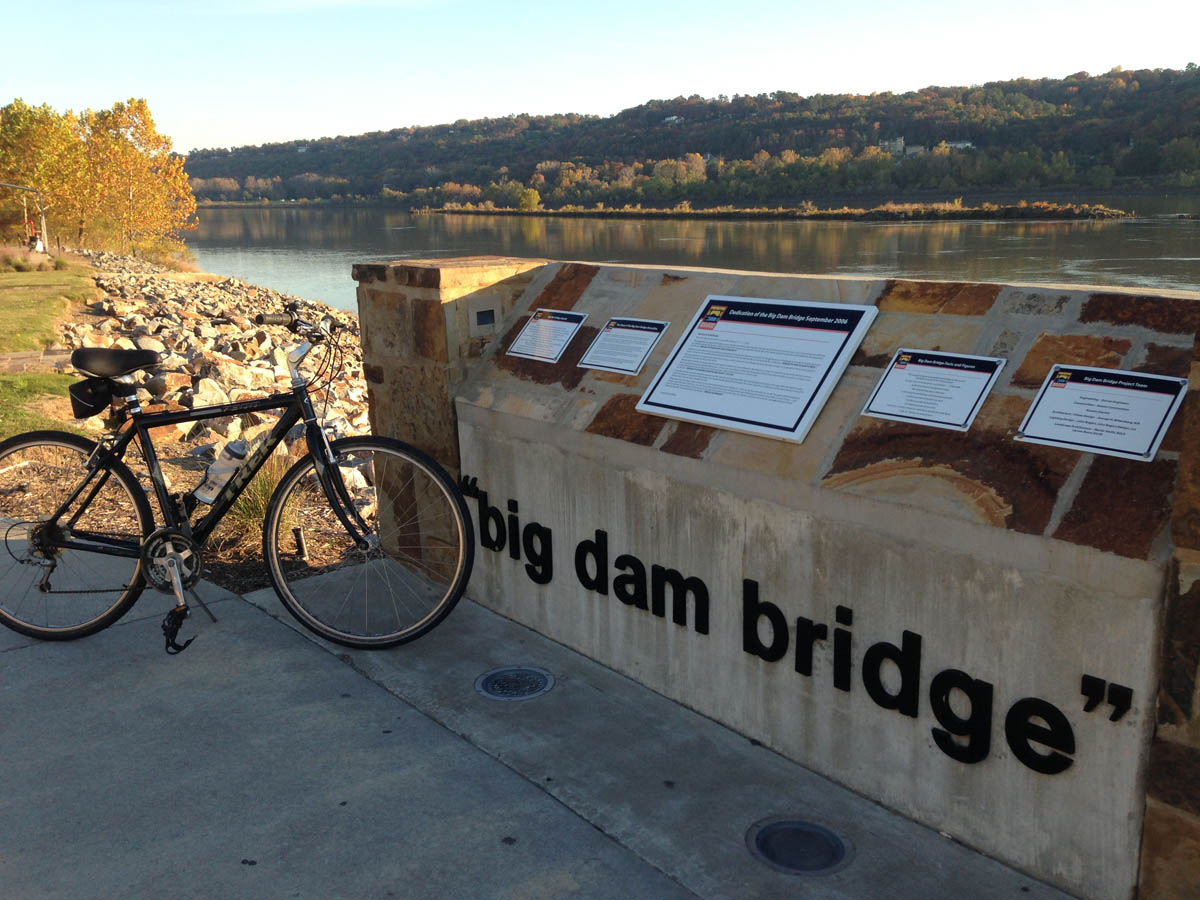 Riding this trail was a blast, as it went alongside the Clinton Library, through Riverside Park in downtown, in front of the Little Rock River Market, alongside golf courses, city parks, up and over the Big Dam Bridge, and back again, through twisting, winding bike-only lanes with varying views of the river, bluffs, fall foliage, the State Capital, and Little Rock skyline. 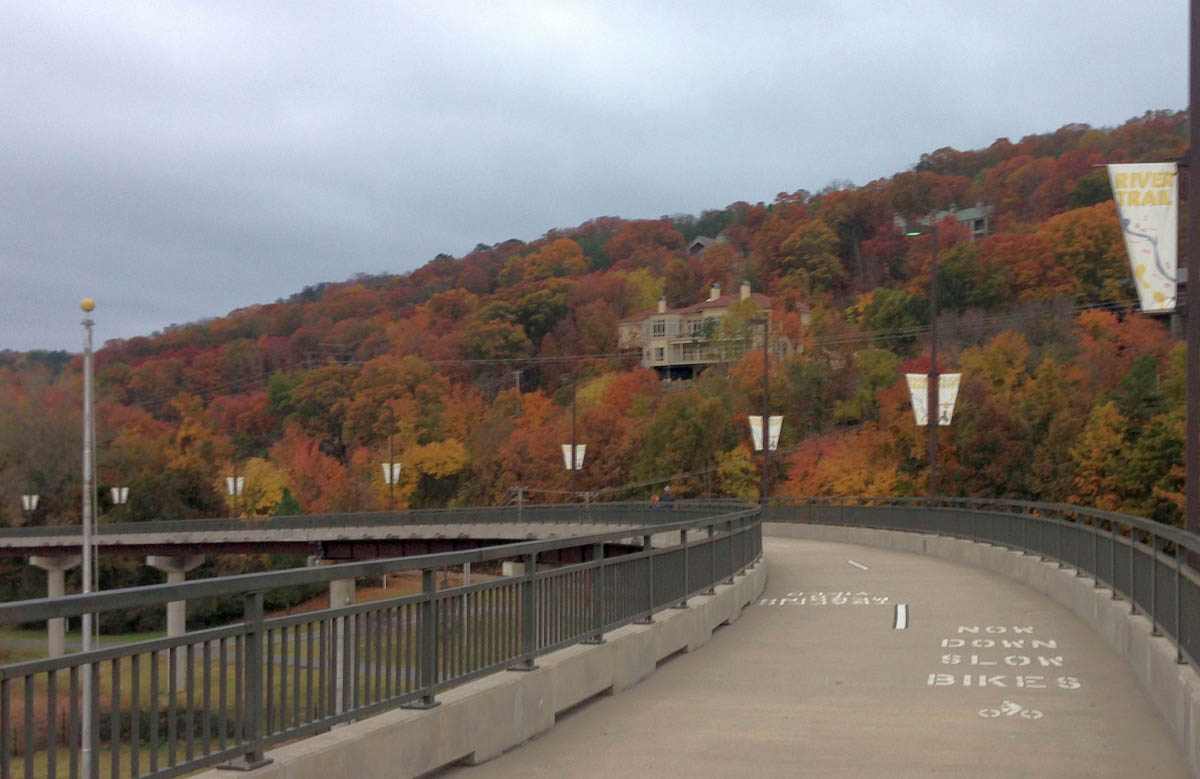 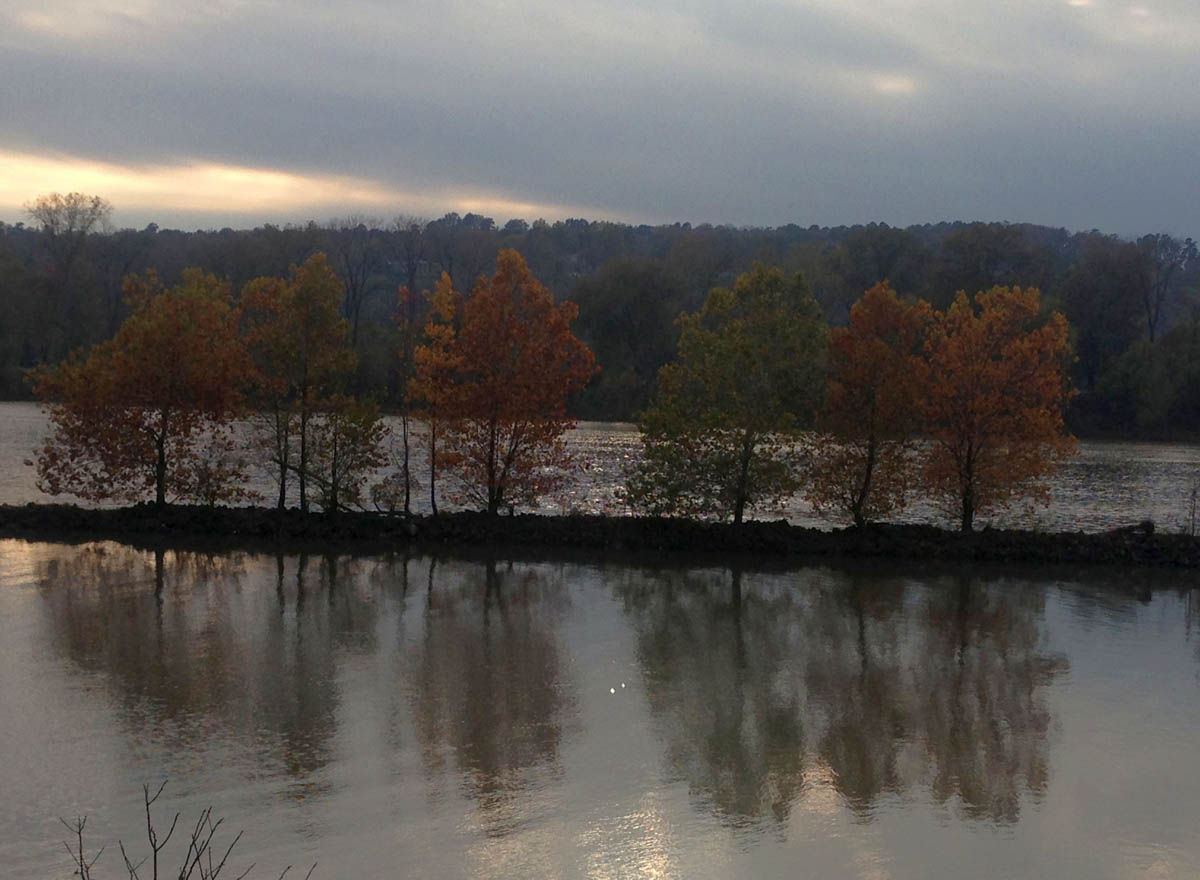 Another bonus of the Downtown Riverside RV park is its close proximity, exactly 0.2 miles from the Verizon Arena.  I’d like to tell you that is the reason I went to see “P!nk” in concert was for the novelty of being able to walk to a major concert event and back without having to park!   But fact of the matter is, I am also a big fan. Everyone is entitled to at least one “Pop Culture Guilty Pleasure,” right? 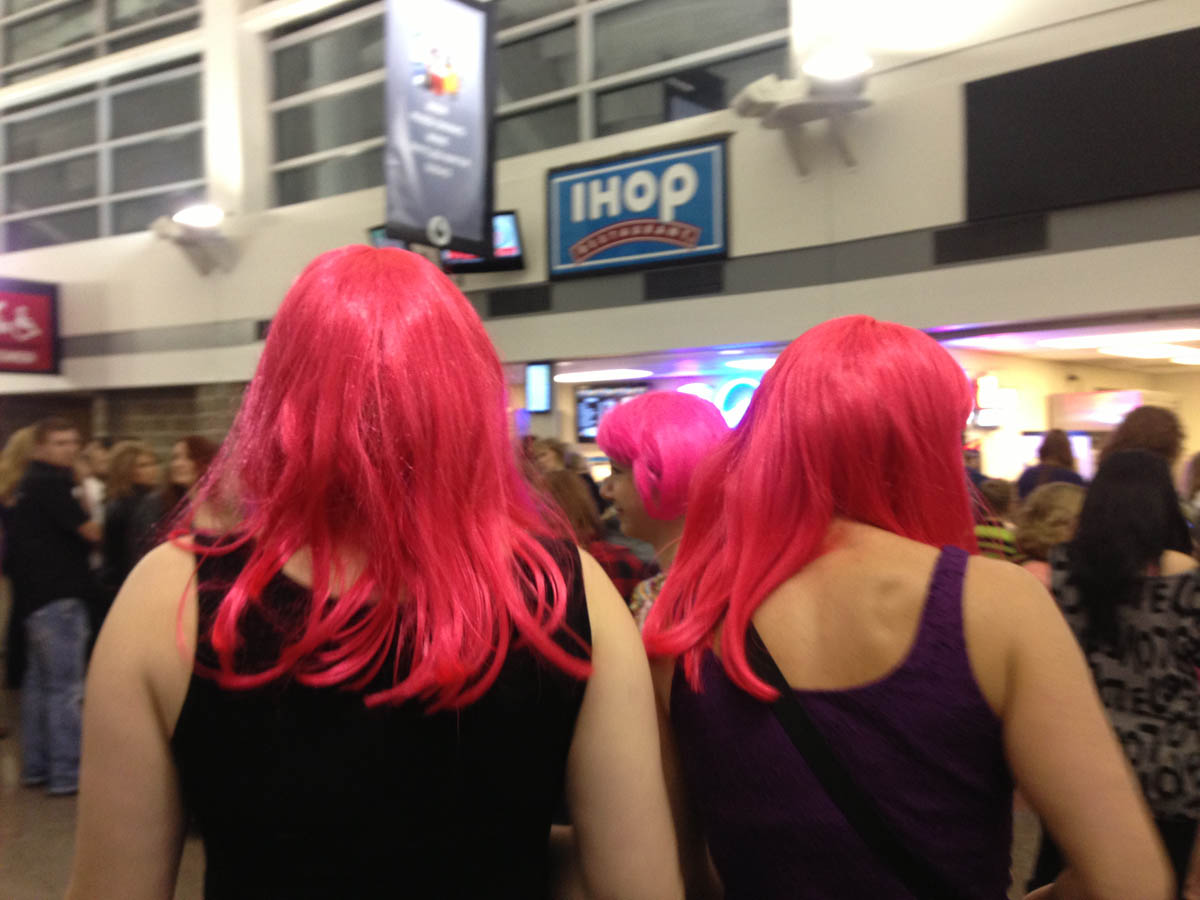 But anyone who has ever really listened to her music, especially the lesser known songs, realizes what a talented soulful, singer/songwriter she is.   Her raspy voice reminds me of Janis Joplin, who she cites as one of her greatest influences.  In fact, she has covered several of her songs, dare I say, better than Janis herself (blasphemy, I know!) 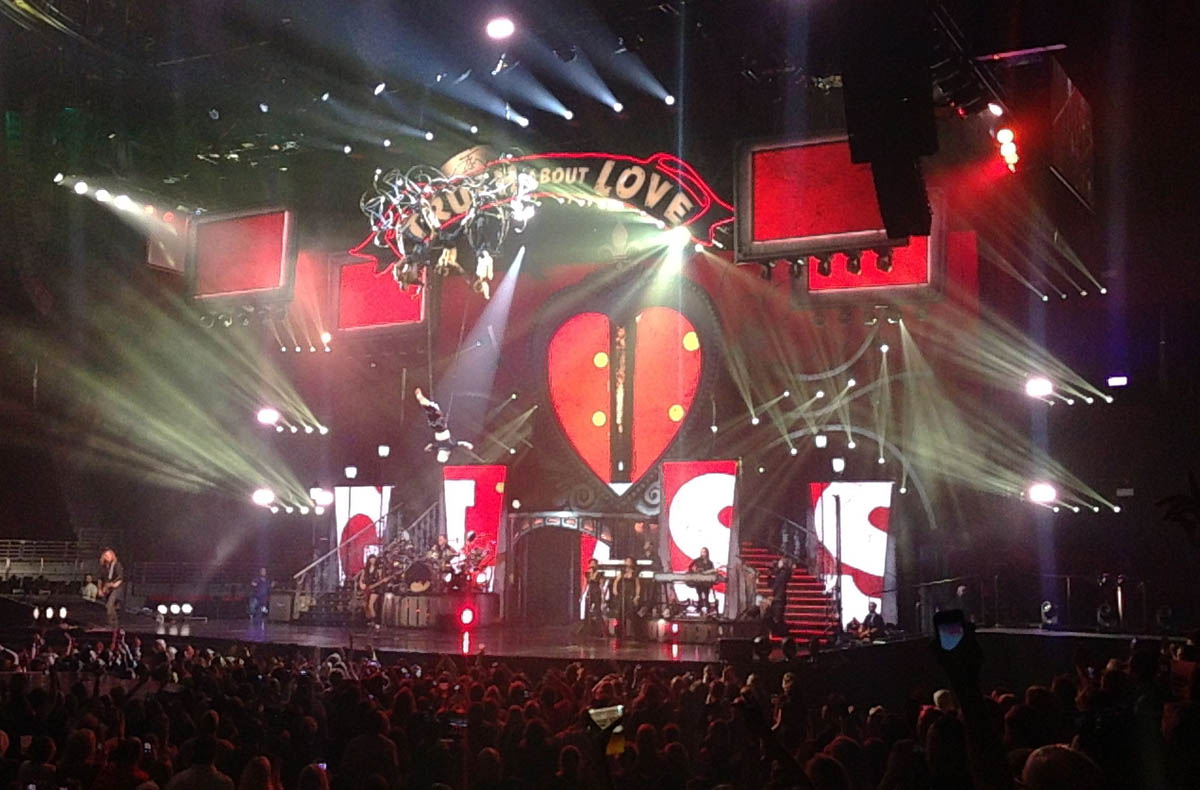 Don’t look for her on the stage….she is swinging upside down, from the rafters!

But the draw of her live concerts for me is the aerials.   It’s like attending a concert and a Cirque du Soleil performance in one!  She flew all over that arena.   If I can’t fly myself, I at least enjoy watching someone else do it! 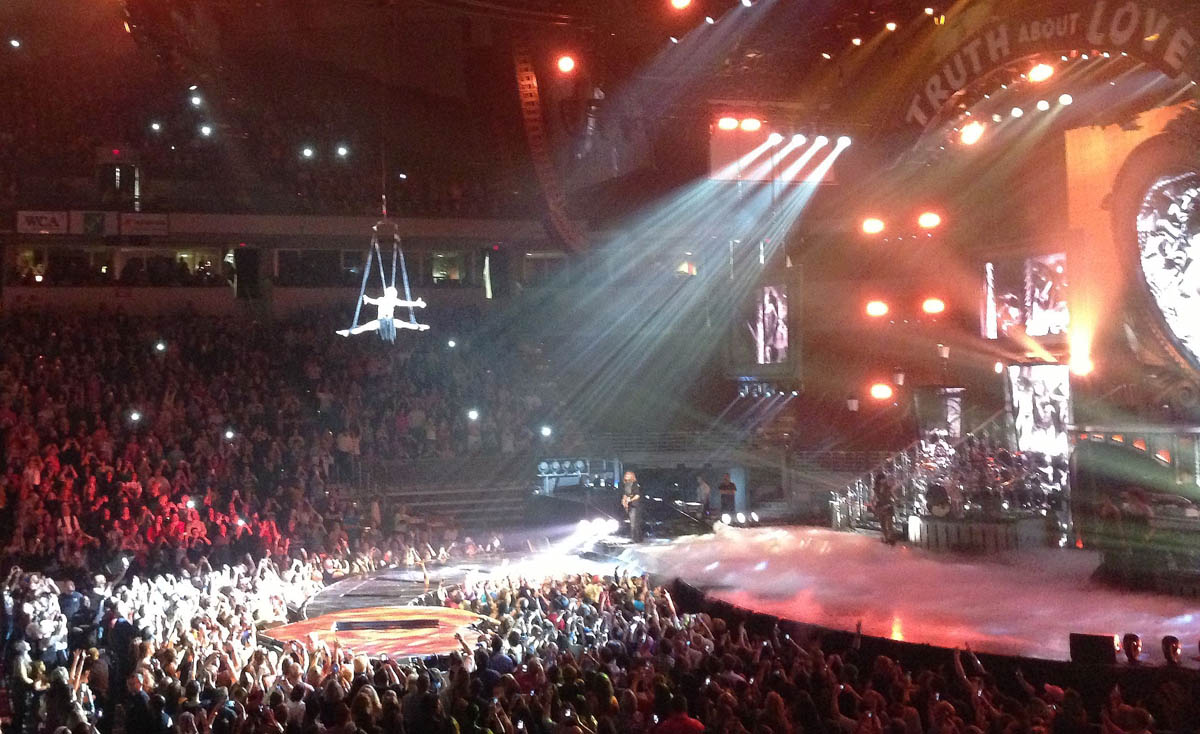