Mexico’s Copper Canyon, or “Barrancas del Cobre,” may lack the glorious palate of beautiful colors painted across the Grand Canyon, but it more than makes up for it in size.  It is four times bigger than the Grand Canyon and the deepest in North America.   Actually a series of canyons in the Sierra Madre mountains, it was formed by six rivers which converge into Rio Fuerte, flowing into the Sea of Cortez.

Being one who lusts over great railway journeys, the train through Mexico’s Copper Canyon has long been on my wish list.   This train travels for over 400 miles traversing the verdant green mountains, rivers and pine forests, skirting the edge of the canyon, reaching a maximum altitude of 8,000 feet before dropping down into temperate zones where bananas grow.  The railway line crosses over 36 bridges and ducks through 87 tunnels on the 14 hour ride from Chihuahua to Los Mochis near the Gulf coast.

Ideally, one should try to ride the train from southwest to northeast, as the most scenic parts are on the western end, which can be dark during the shorter winter months long before the train reaches its final stop.   But I am southbound on my way to meet my brother in Oaxaca for New Years, so it was not feasible for me to take the train northbound.

“El Chepe,” nickname Ferrocarril Chihuahua al Pacífico Railway, departs Chihuahua at 6:00am, which meant a 4:30am wake-up call.  I can stay up till 4:30am easier than I can get up at that hour!    So I set three alarms to be sure I woke up.  After having spent the previous night sleeping on a bus, I confess to crawling back into bed for reconsideration.  What was the hurry, anyway??  But I was freezing in Chihuahua, and eager to get further south as soon as possible.  So I forced my feet onto the cold wooden floor of my budget hotel, and vowed not to look back longingly at the mattress until I was fully dressed.

I had originally planned to travel in second class on the railway, as the service is reported to be practically the same.   The second class train travels much more slowly, makes more stops, and operates less frequently, but does so at almost half the price.   However when I arrived at the train station at 5:00am, there must have been 100 local commuters in line to buy second class tickets.   The line snaked around the lobby and out the door into the cold, with people standing impossibly close together sharing runny noses, coughs, and crying babies.   I looked over at the “Primera Classe,” or first class line, and there were only four people.  It was an oasis amidst chaos at an unholy hour of the morning.  All it took was one quick mental reminder, “This is my vacation!” to move me over into the first class line.

I asked the man behind the ticket window my question that I had rehearsed, “Asciento de la ventana en la izquerdo, por favore?”   The window seats on the left side of the train were reported to be the best view.   He literally laughed out loud.  No, more like guffawed at my question.  His English was perfect as he said “You should have reserved a week ago!  Christmas is high season!”   But serendipity doubled back, as I ended up in a window seat on the left side after all!  The single woman next to me preferred the aisle.  However, I later learned it did not matter, as the double paned windows were filled with moisture, obscuring any hope of a view.

Each Primero Express car has its own attendant, sort of like a butler who tends to the passengers needs.  Early on, he passed through the aisle handing out a magazine; DestinoNorte that contained a milepost guide indicating upcoming scenic attractions according to kilometer marker.  I later realized why the woman next to me surrendered her window seat.   Due to the condensation-streaked windows, the only option for a clear view was the open vestibule, which rapidly filled up as each of these mileposts approached.   By being in the aisle seat, she was able to avoid hurdling over boots and bags to be first at the open window each and every time as we neared the upcoming photo op.

After about an hour underway, the sun began to come up, casting a shimmer over the frost-covered plains and frozen streams.  People would race to the vestibule and stand at the open window snapping pictures until their fingers were frozen, then return to their seats to warm up.  Passengers were dressed in ski jackets with fur-trimmed hoods, gloves, and winter boots.  I tried to hold my own in my fleece hoodie and thin-soled mesh Merrells, but I was no match for Mexico’s well-heeled winter vacationers, fashioned with half-fingered gloves for snapping selfies with their iphones.

The butler’s next duty is taking reservations for breakfast in the dining car.   As a solo passenger, I was seated with a family of three from Colombia.  A buzz of excitement spread through the dining car as the first view of snow-covered mountains came into view.  I was moved by the reaction of the young man next to me who had never seen snow before.   “If only I could touch it,” he said.  It wasn’t long before we were chugging uphill into the snow-laden pine forests with video cameras, Nikons, and smart phones at the end of arms protruding from every opening.

Pictures from a jerky, speeding train with a “point and shoot” camera won’t come close to doing it justice, but I have always been a better traveler than I am a photographer. 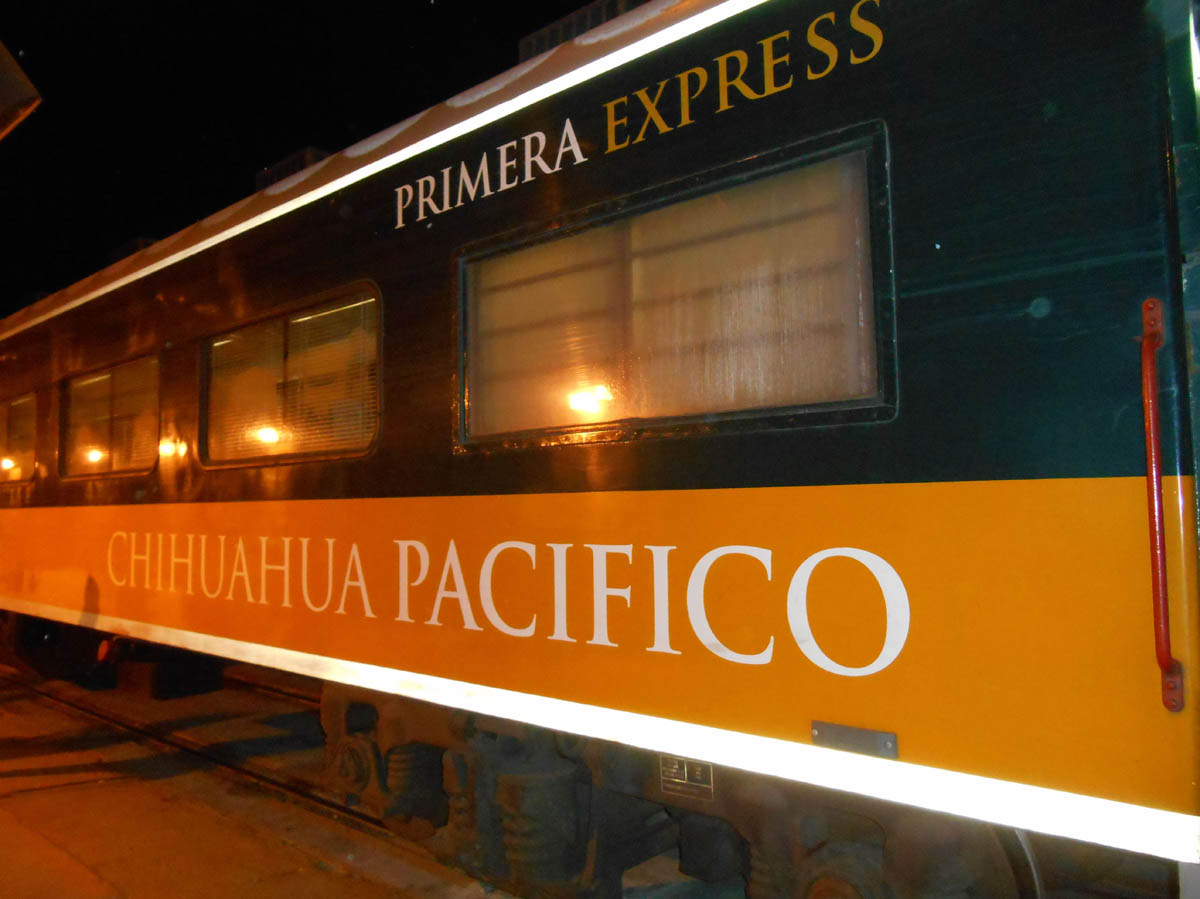 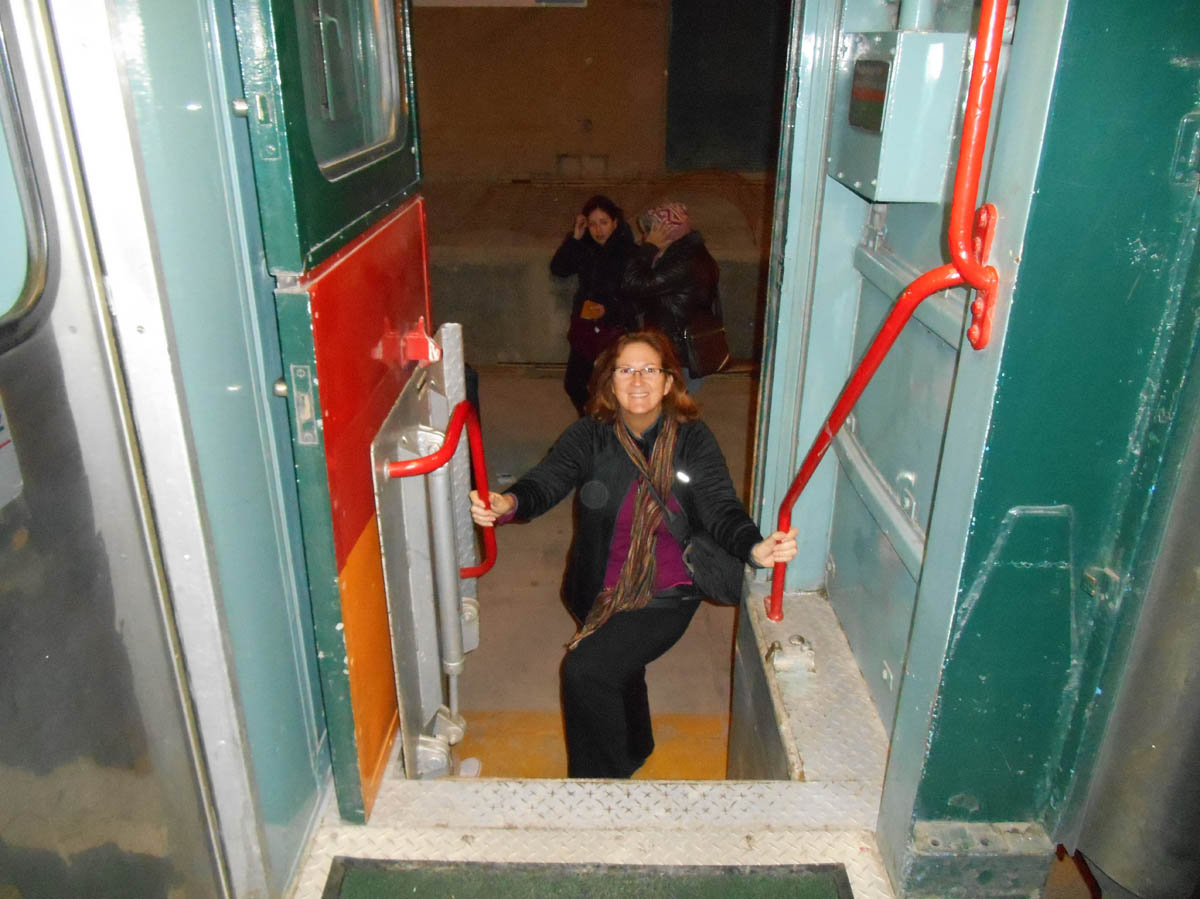 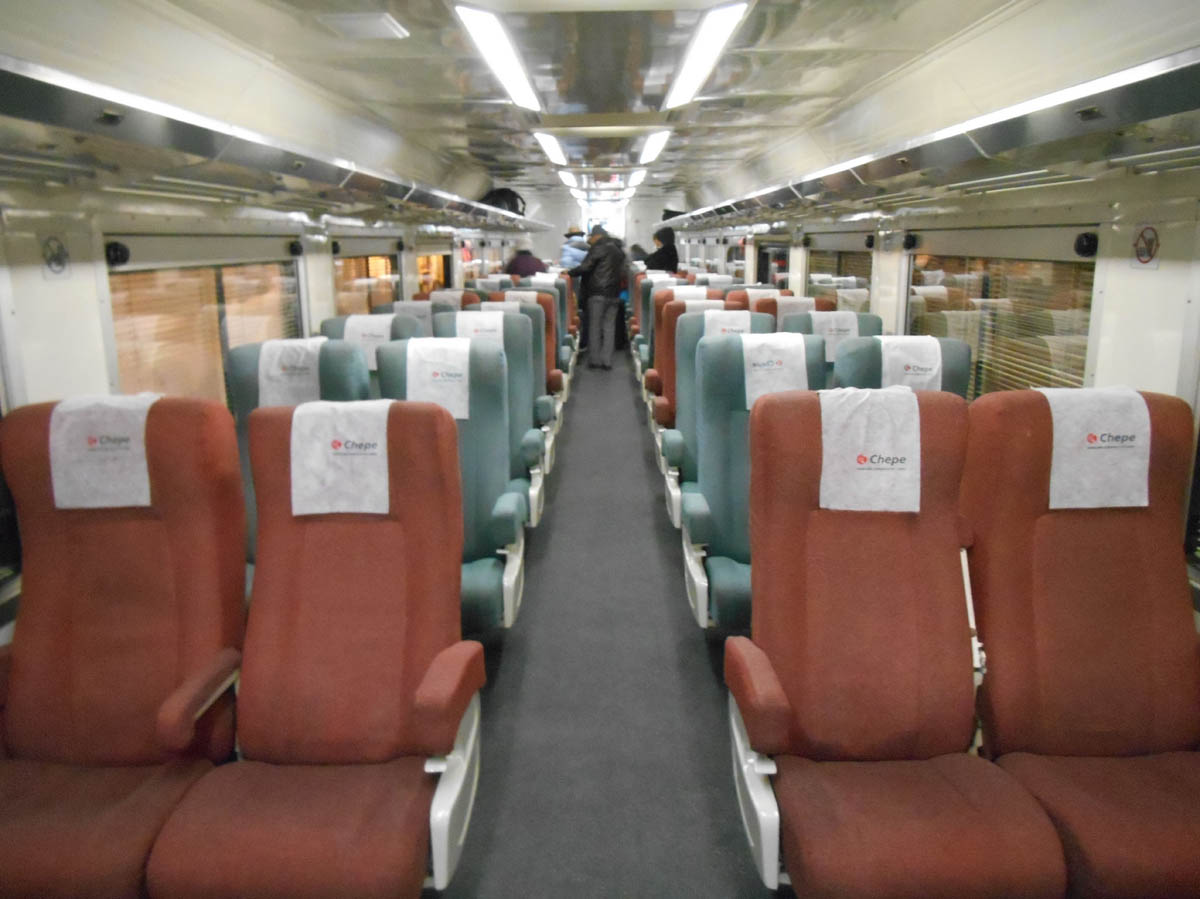 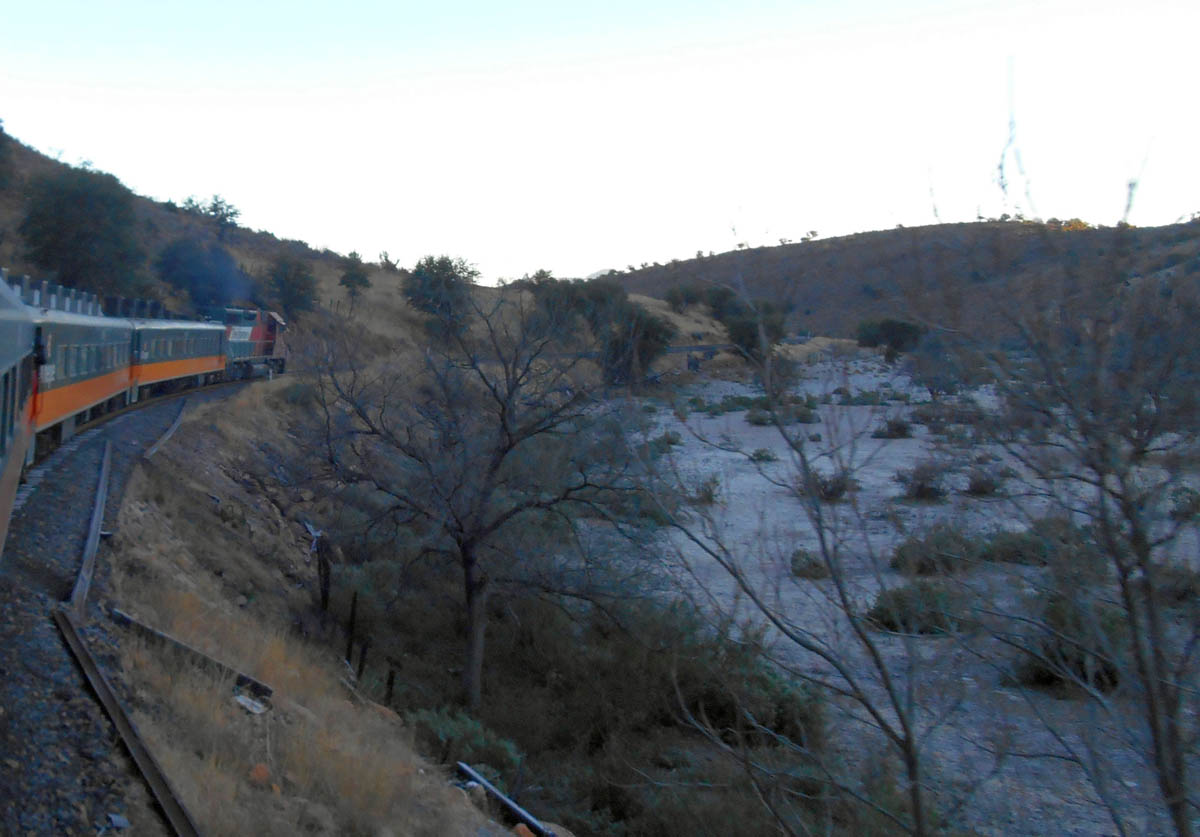 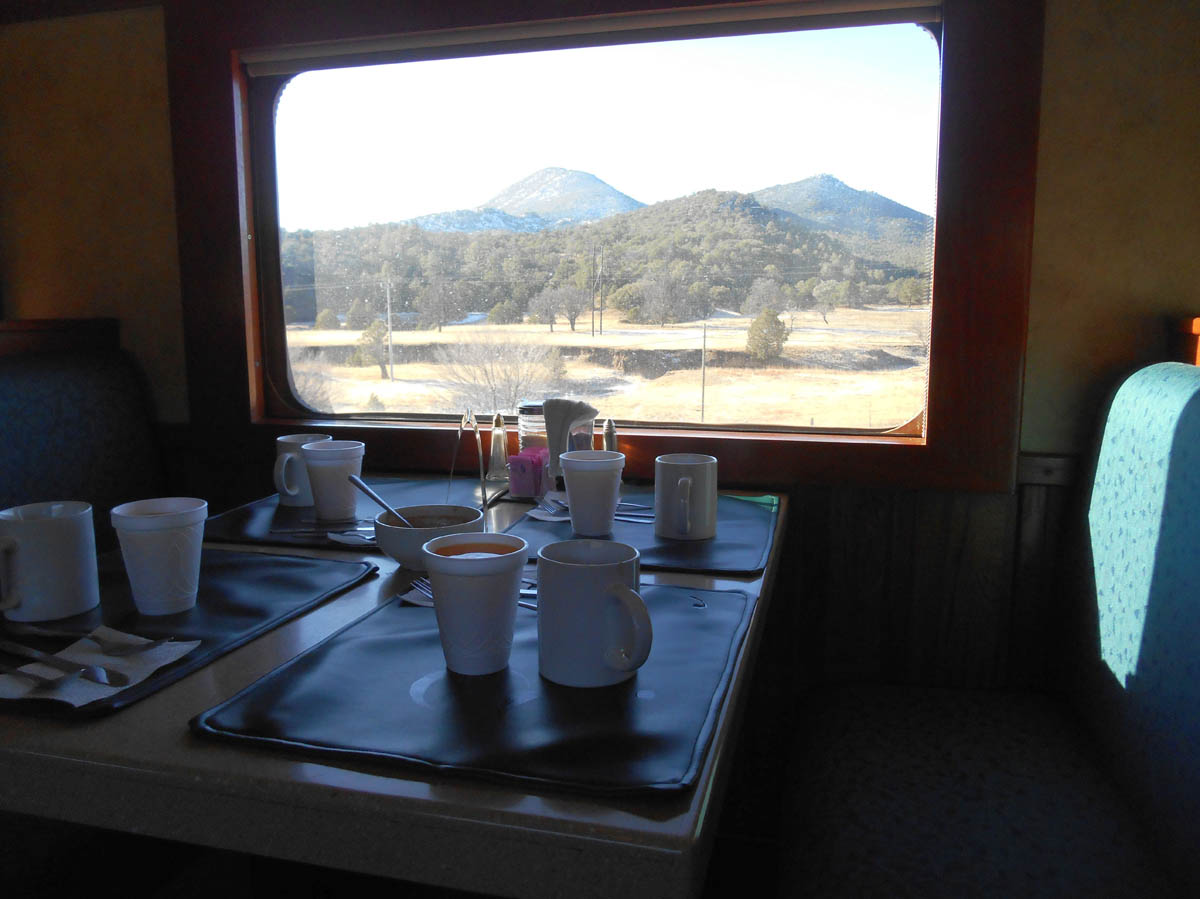 Reservations are made and tables set for breakfast in the dining car. 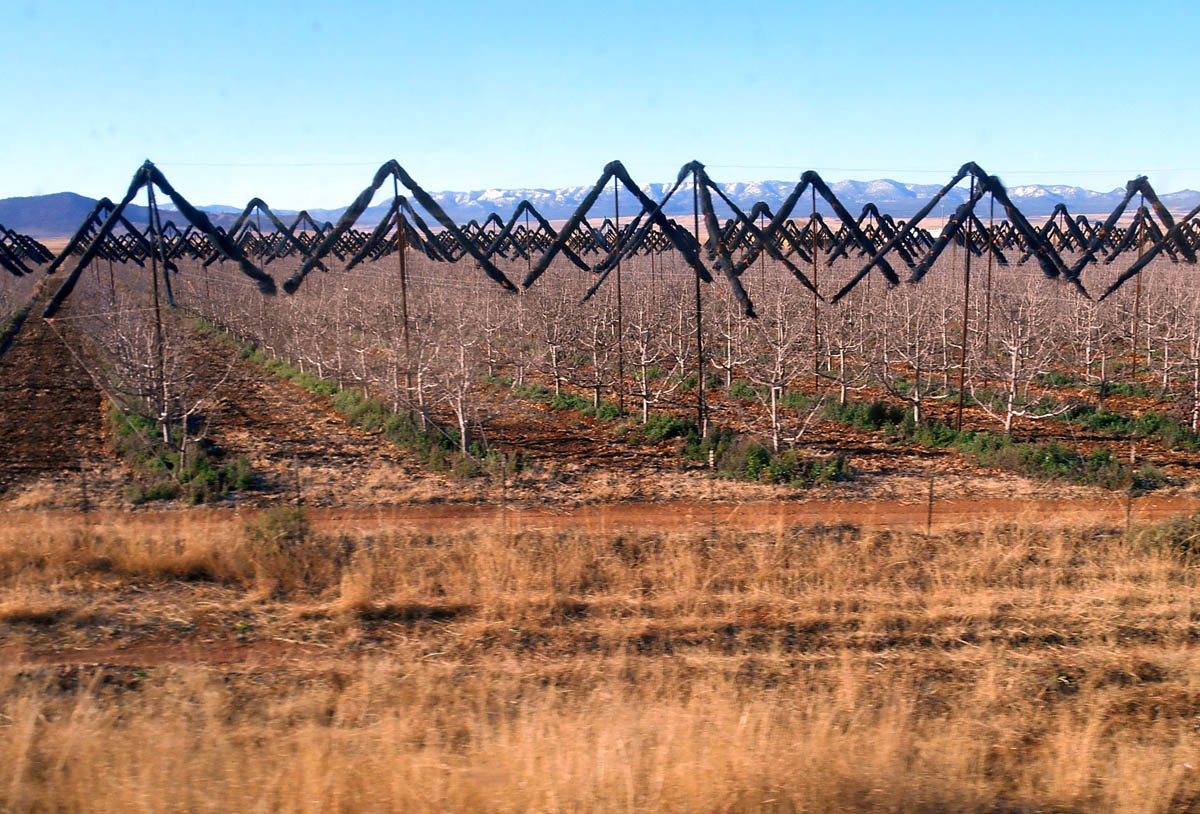 We pass through miles of apple orchards. The inverted V-shaped nets are used to protect from frost during growing season. 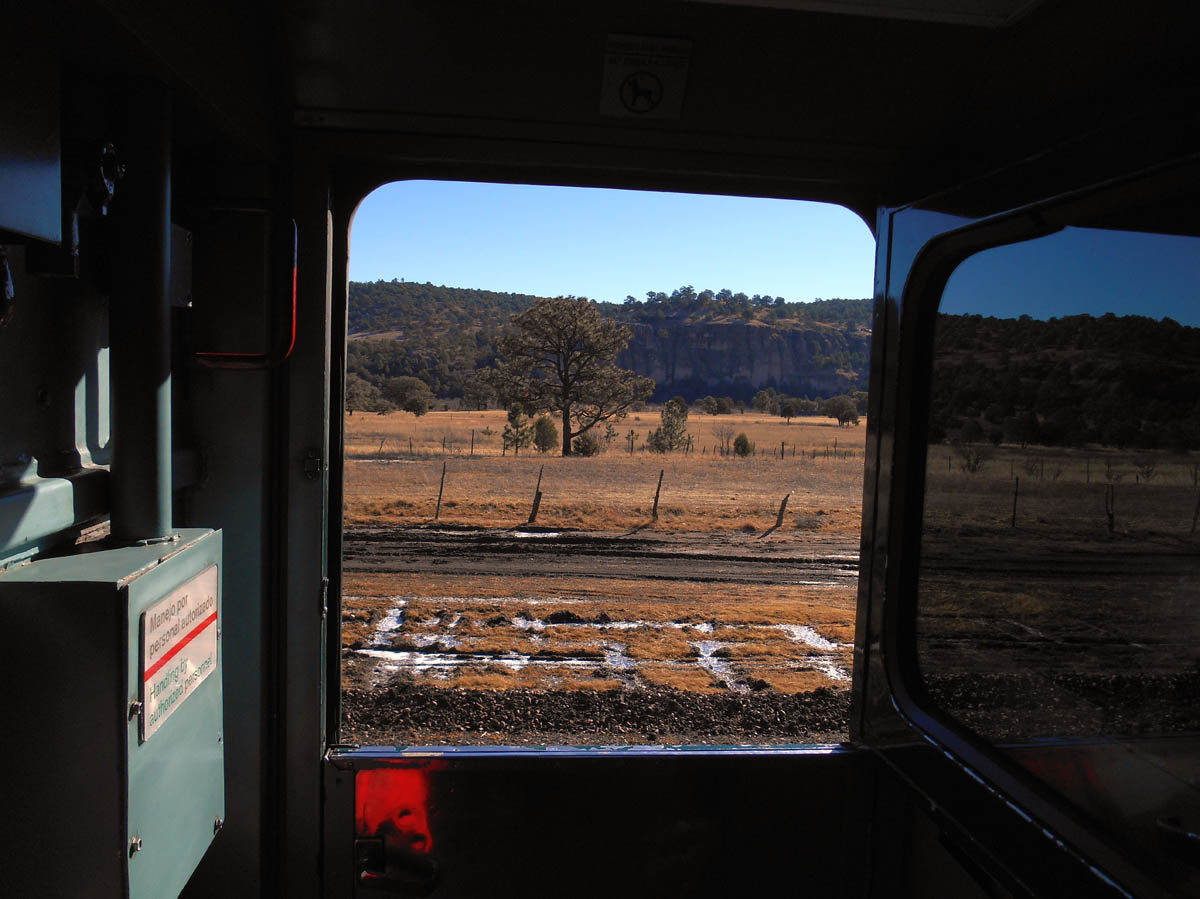 Open windows in the vestibules between cars offer clear, but cold viewing. 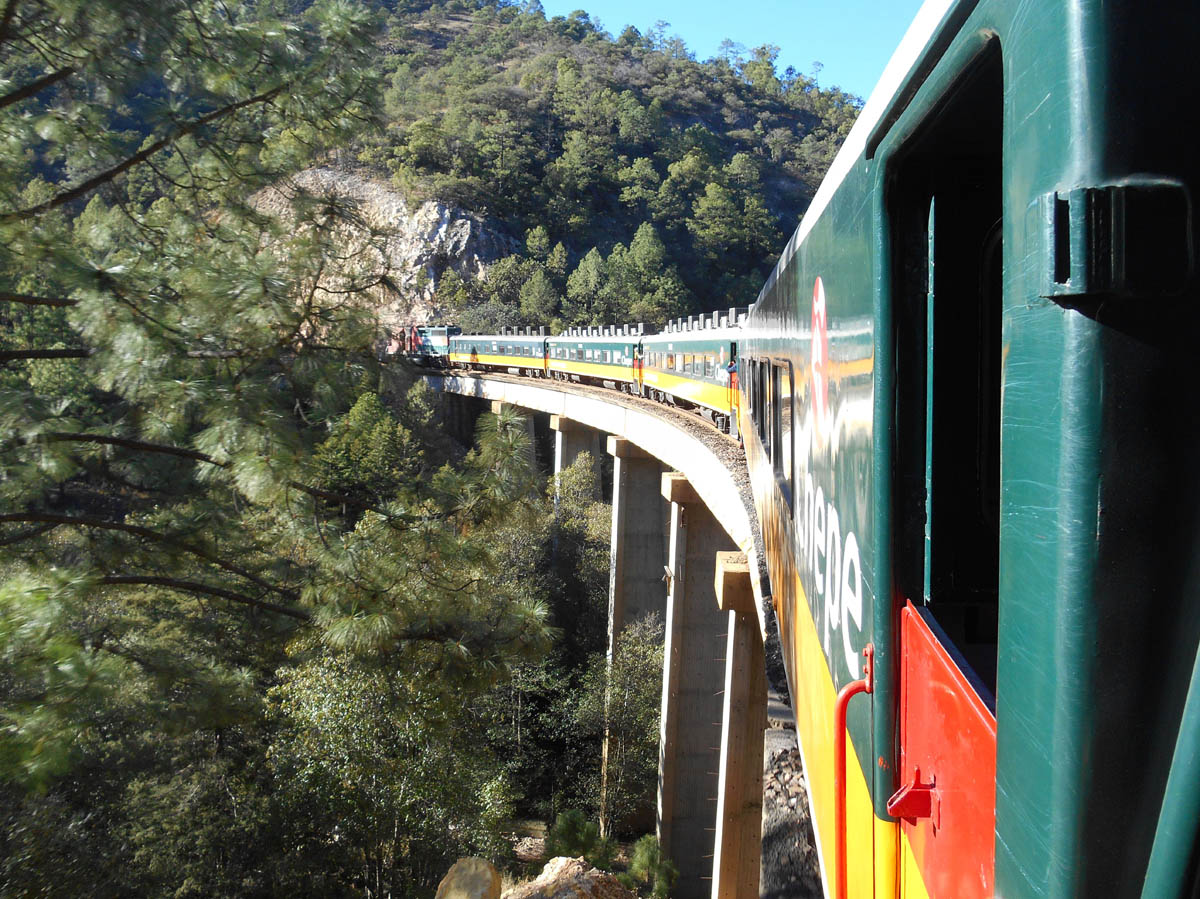 The train passes over 37 bridges…. 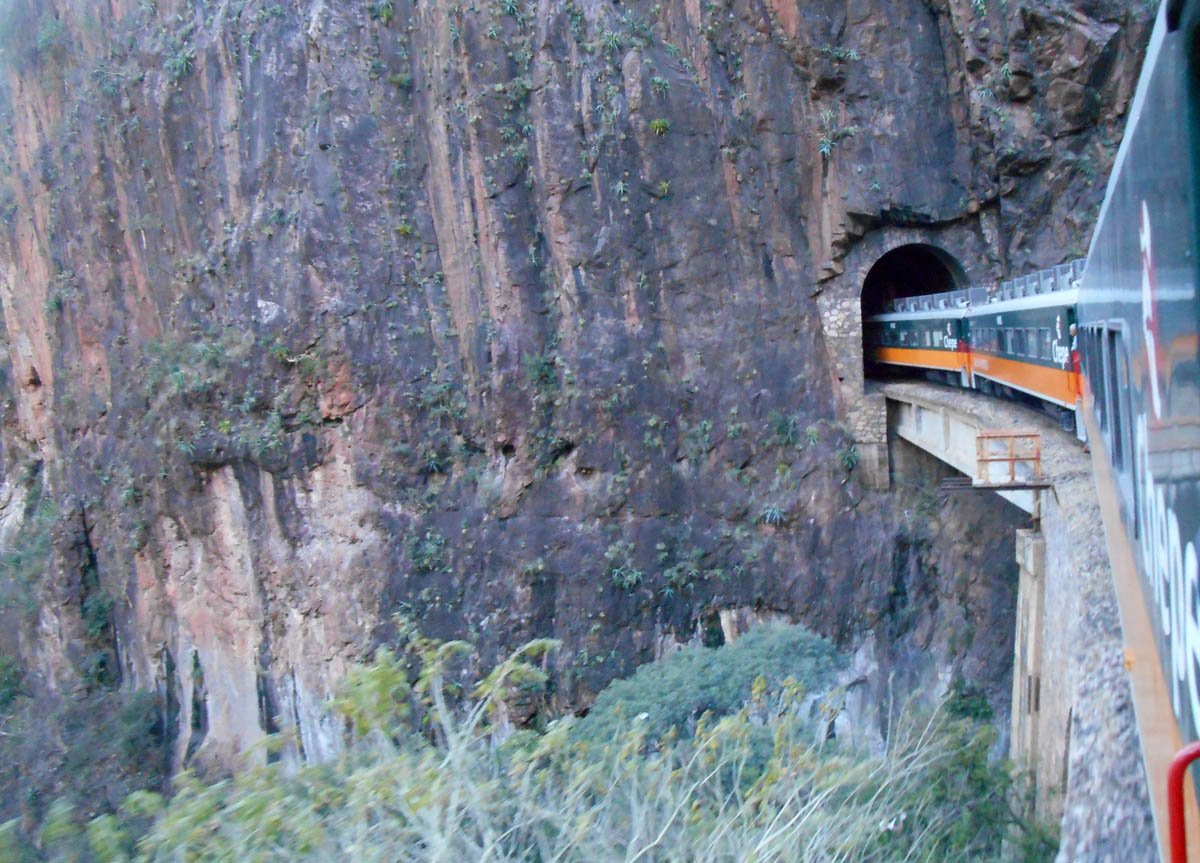 And threads through 86 tunnels… 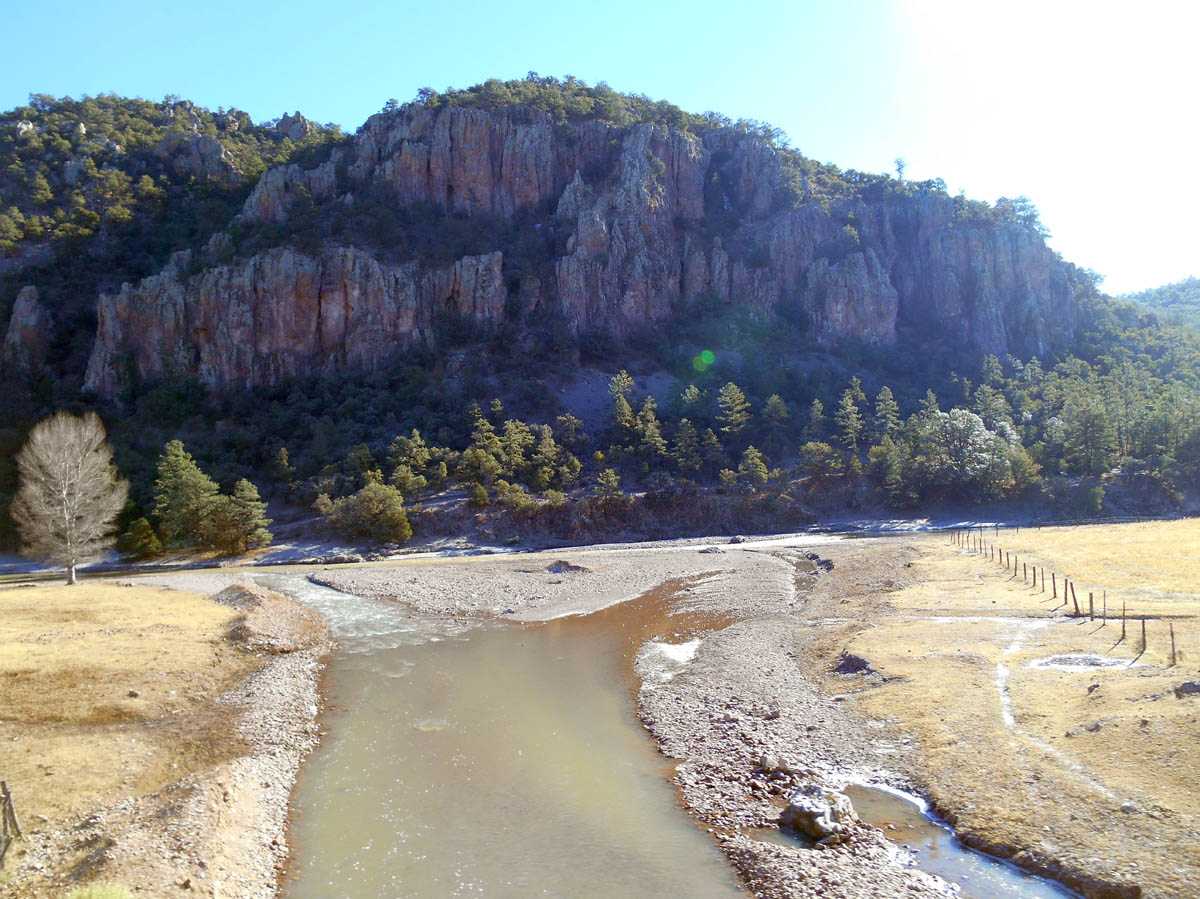 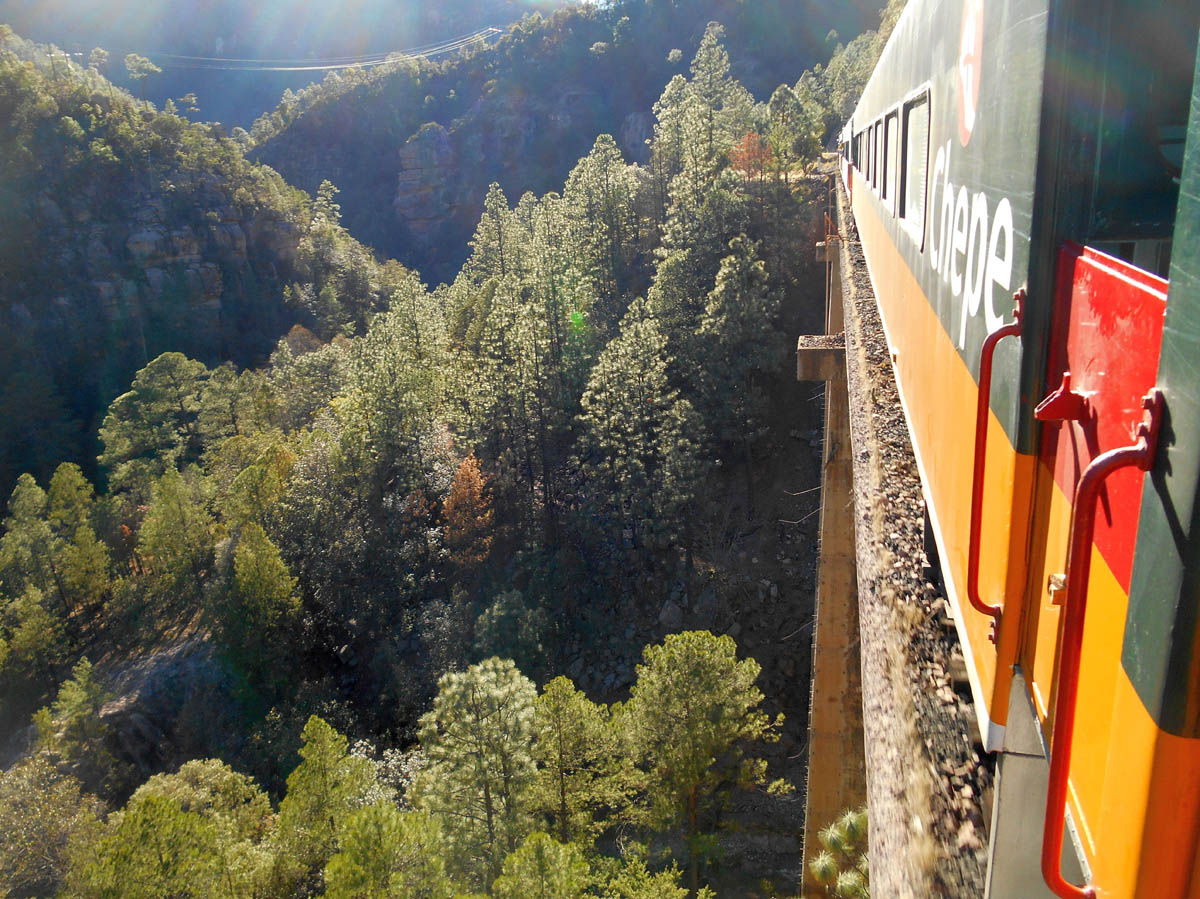 …and through lush pine forests. 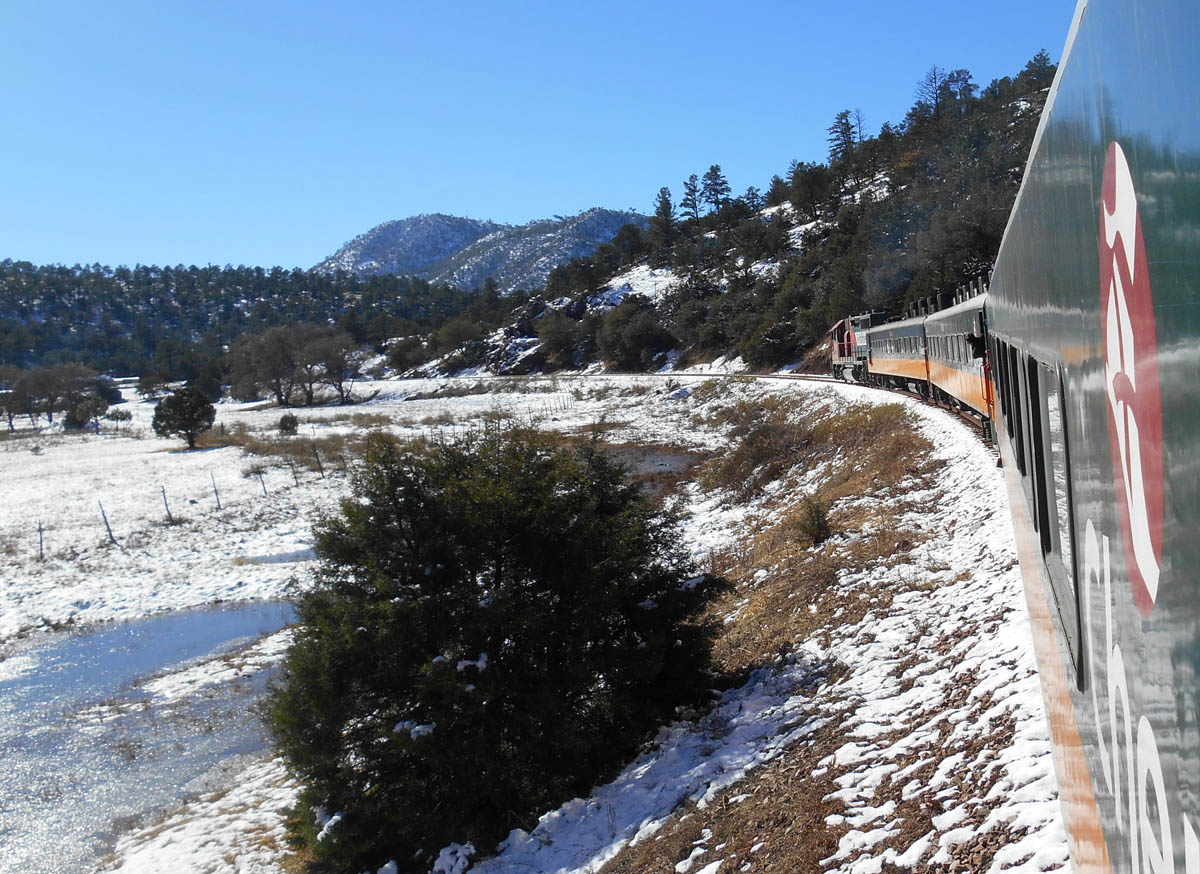 Excitement mounts as we begin to see snow in sunny Mexico! 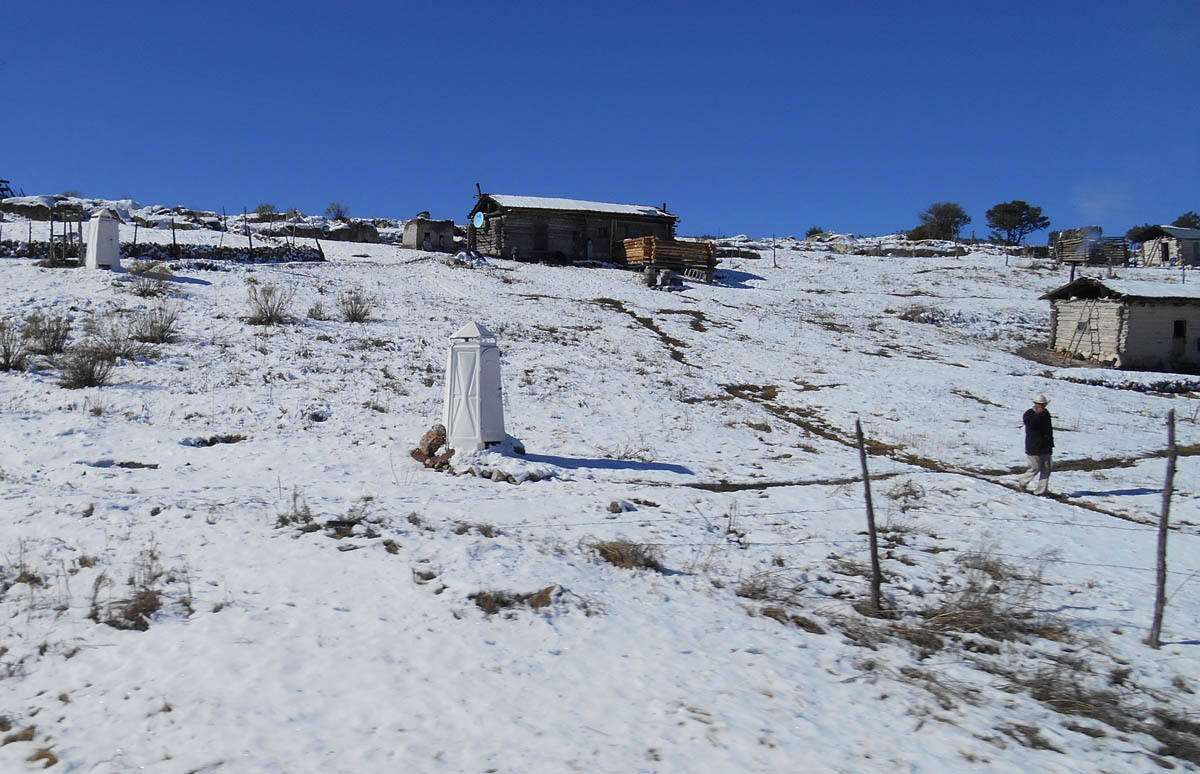 I presume these white buildings are out houses….can you imagine the draft? 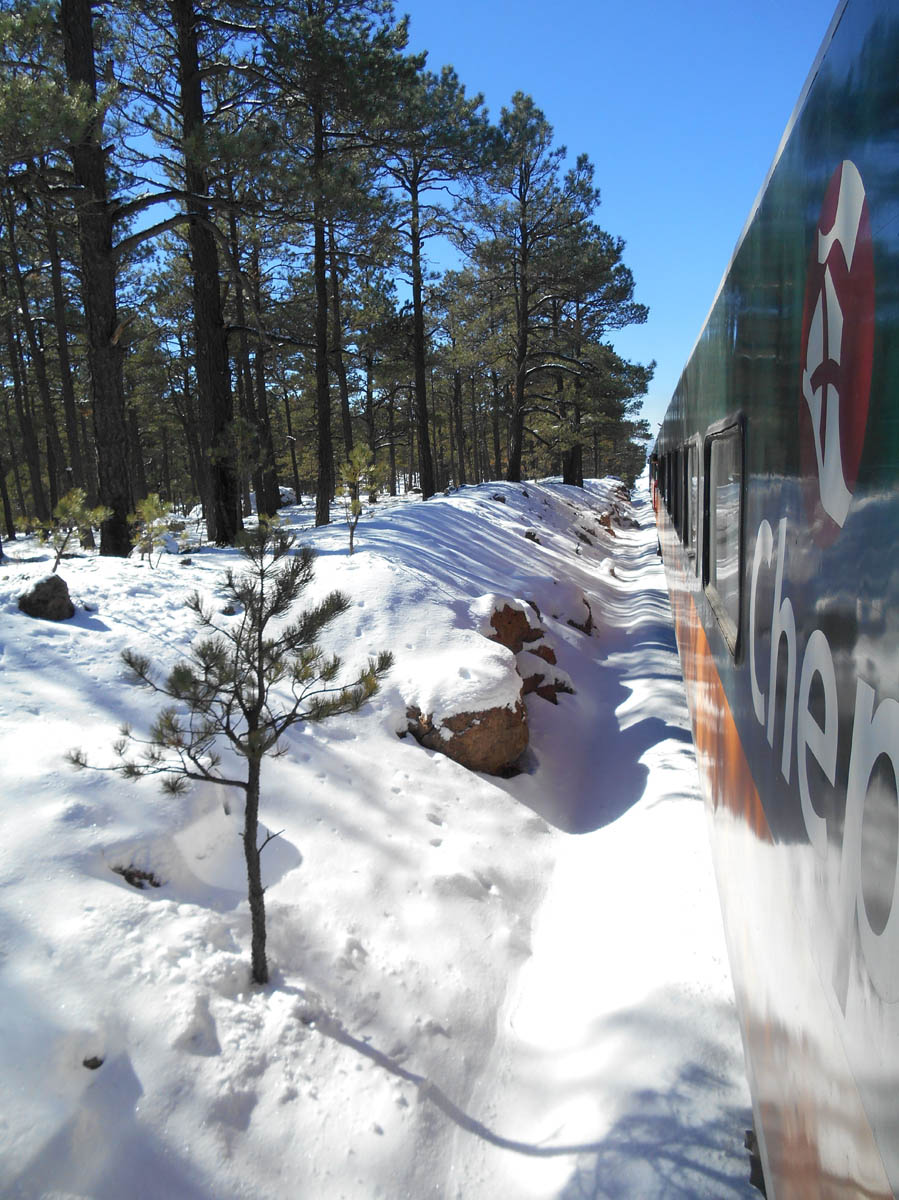 The snow gets deeper as we climb… 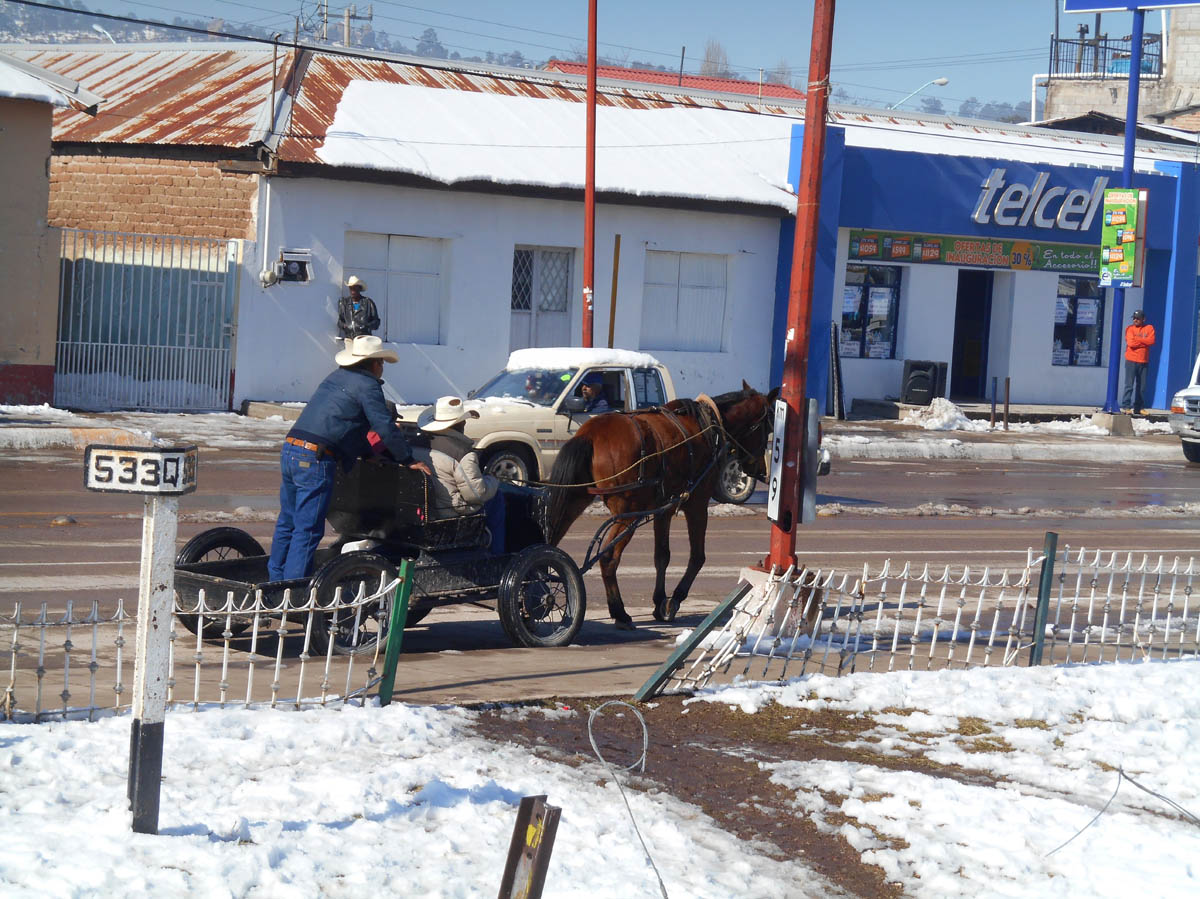 Kilometer marker 533 indicates we are in San Juanito, at almost 8,000 ft elevation, it is the coldest town in the state of Chihuahua. 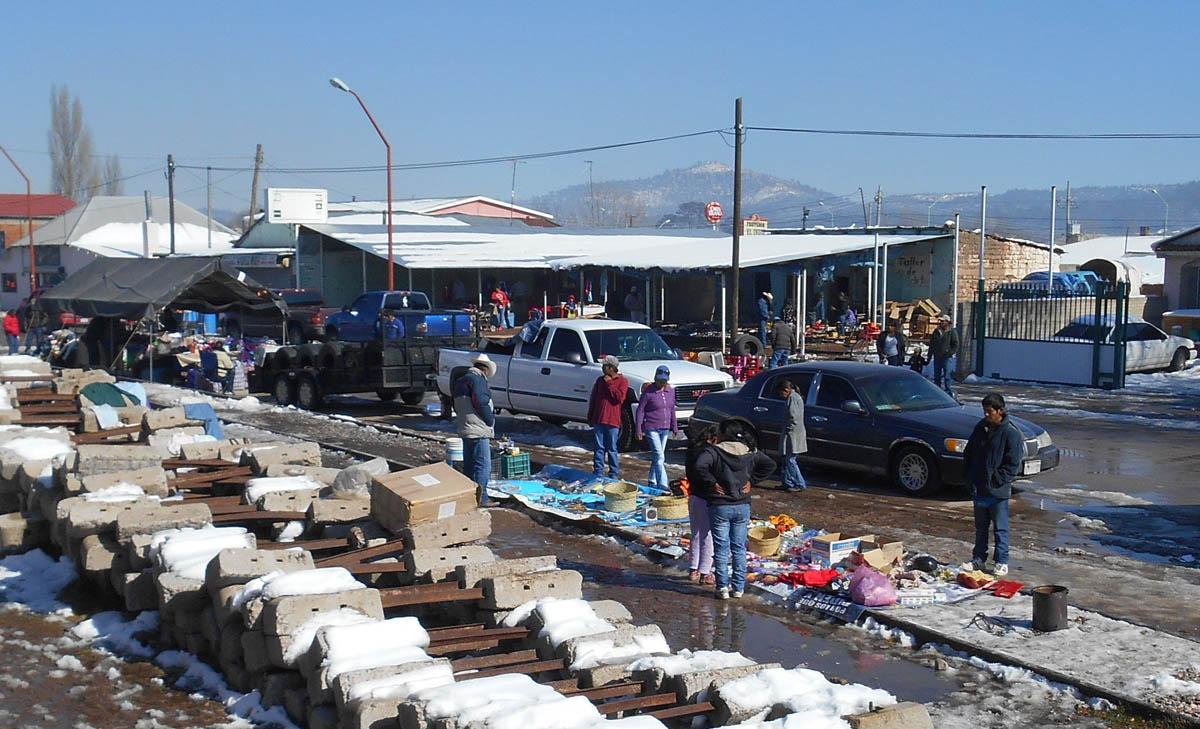 Market day on the train tracks 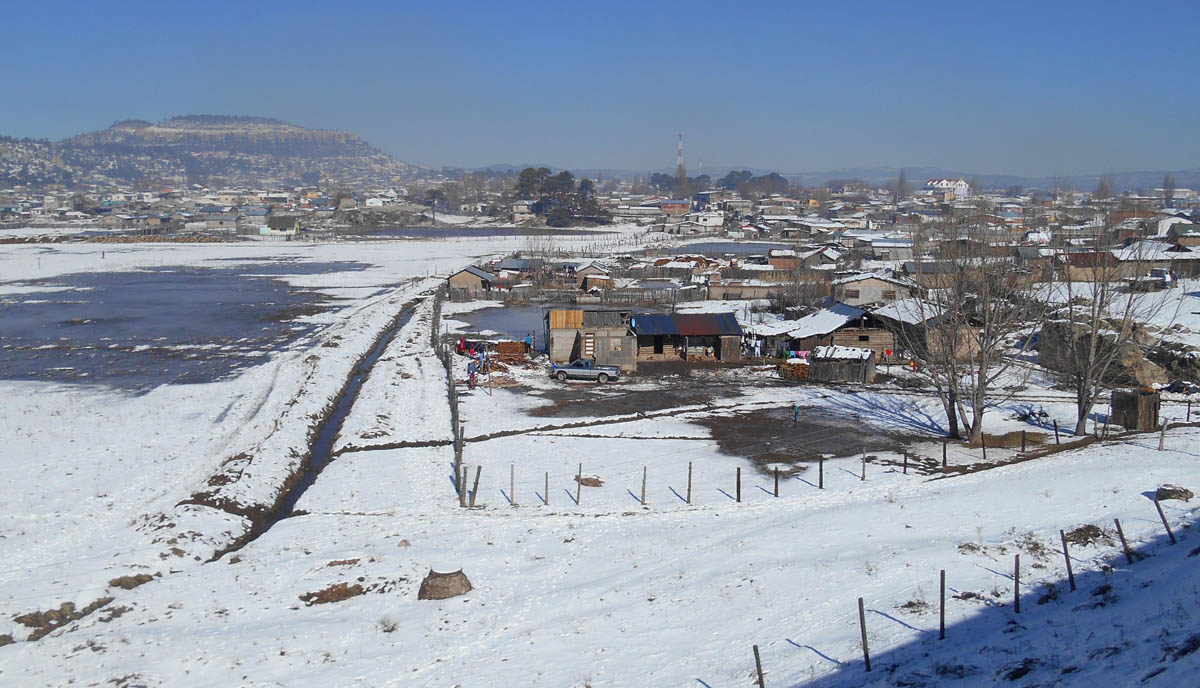 Believed to be one of the oldest towns in Mexico

Coming up next, we reach the Continental Divide, and get a glimpse of the actual canyon that makes this train ride famous…