It was a 24 hour bus ride from Mazatlan to Oaxaca, which was both a little bit of heaven and a little bit of hell.  Most people flinch when I tell them I am riding a bus across Mexico.   I have done this more times than I can count, from Texas all the way down close to the Guatemala border, and still keep coming back for more.   This trip alone would take me six different buses to get where I am going.

The Mexican bus system is quite extensive, convenient, and surprisingly efficient.  The classes of service range from a “luxury bus” which is like a First Class airline seat, down to second class, which is on a par with an aging Greyhound bus in the US.  Some are double-decker, while some offer additional leg room with only three seats across.   Some lines (ETN Turistar) specialize in catering to the luxury travelers, while others offer different levels of service at different times.  (ADO, ADO Gold, Primera Plus Platinum)

The challenge lies in the fact that the routes are very “regional.”   So you must construct your own trip using different bus lines, always making sure they connect in the same terminal.  Some cities have more than one terminal (for example, Mexico City) and some bus lines have their own separate terminals.  So it can be a bit like piecing together a puzzle, which can be an adventure or an ordeal, depending on how you choose to look at it.  But with a little bit of pre-planning (Thanks again, Contessa!) it is possible to get where you want to go in comfort, with relative ease.

Buses in Mexico typically have assigned seating, which is usually respected by all passengers.   Try to get to the station early for a window seat, close to the front.  The buses are all “diesel pushers,” so the further back you go, usually the higher the temperature.   It is easy to put on another layer on a cold bus, but can be miserable with no relief if you end up seated in front of a hot diesel engine.

Two items essential for bus travel are always a sweater or small blanket, and some type of earplugs or MP3 player.  Movies are usually played on the drop-down screens overhead, and are always dubbed in Spanish.  They always seem to be violent films, for example James Bond’s “Skyfall” with lots of gunfire, or the Twilight Series “Eclipse” where a pack of vampires battle it out with werewolves, so the soundtrack of ongoing violent struggles can become a bit overwhelming.   Always make sure your ipod is fully charged before boarding a Mexican bus!!

The first leg of my journey from Mazatlan to Mexico City was absolute heaven.  It was an overnight bus leaving at 4:00pm, arriving at 6:30am.   The bus only had three seats across, all very plush, with extended leg room,  in-seat video screens, individual headsets, a snack (ham and cheese sandwich, cookies, and drink of choice.)   The bus was equipped with two lavatories, one for men and another for women, and had fairly consistent on-board wifi service.   I got caught up on my blog writing, and then slept like a baby.

I did not reserve the second leg of my journey from Mexico City to Oaxaca, because I was afraid of misconnecting (we ended up arriving one minute early.)  Consequently, I ended up on the second class bus version of hell.   Not only was it packed, but half the bus was wheezing, sniffling, and hacking.  It was enough to make me wish for one of those face masks the Asians always wear when traveling.  I was penned in by a shrieking two year old and a notably weary young mother sitting next to me.  You know that look of relief on a mother’s face when she sees that she is seated next to someone who is potentially a mother or grandmother herself, who may be willing to be of some help.   I always feel a little sorry for them as they quickly realize I never got the “Mommy gene.”

Don and I arrived at our Oaxaca hotel within 30 minutes of each other, he on a flight from Dallas, and me on the bus from Mazatlan to continue our family tradition of ringing in the new year from Mexico.  But I will splurge on a flight back to Texas from Oaxaca. If they were all like the ETN turistar bus, I could just keep going and going.  But after six buses in one trip, I am ready for a 30,000 foot view. 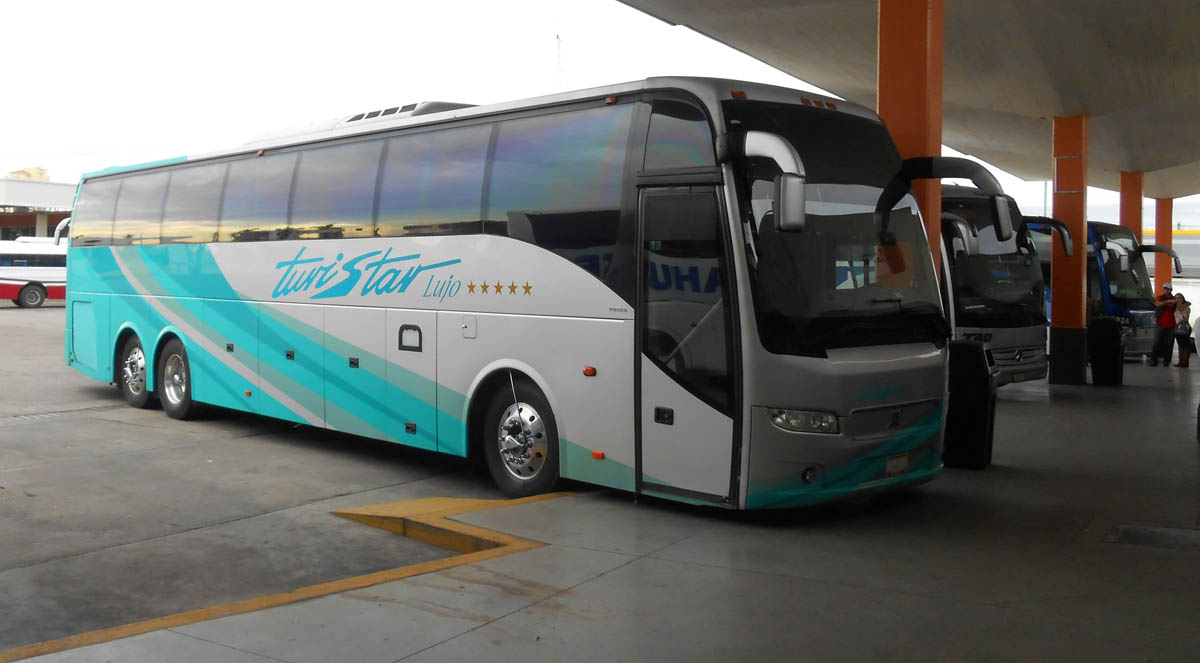 The ETN “turistar” luxury bus is spotless, inside and out. 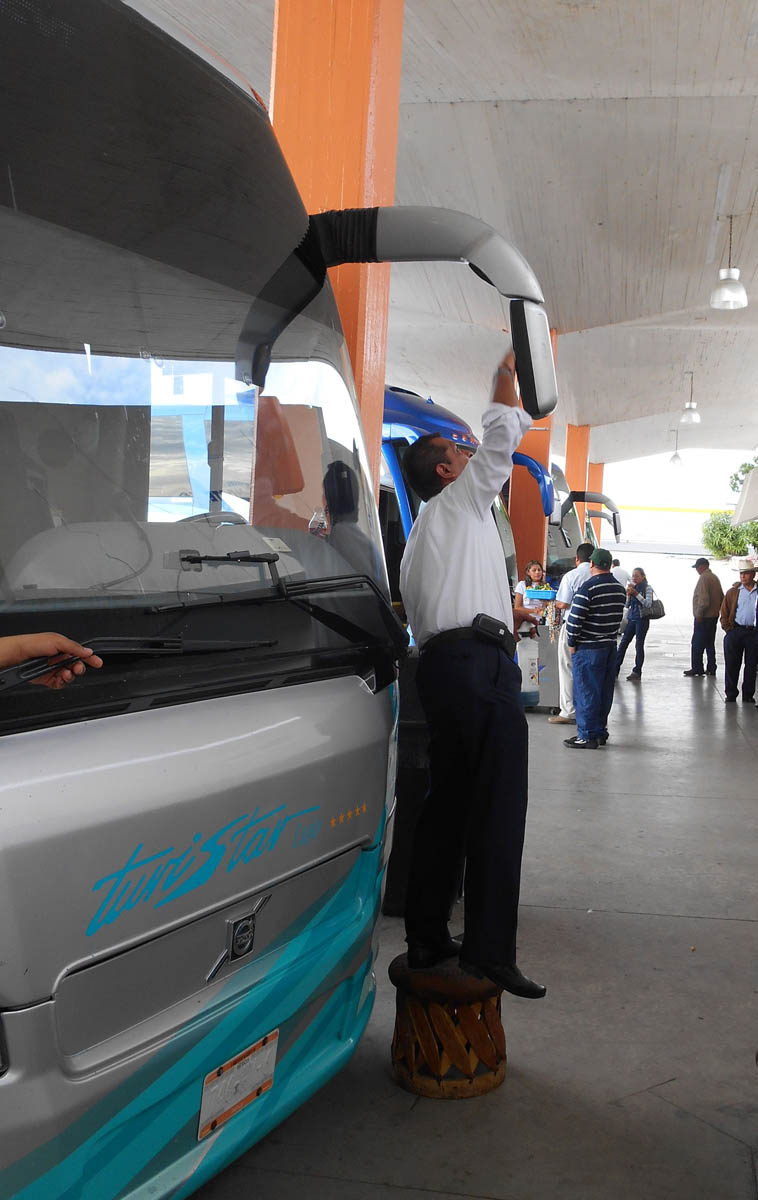 Bus driver does last minute cleaning to his mirrors… 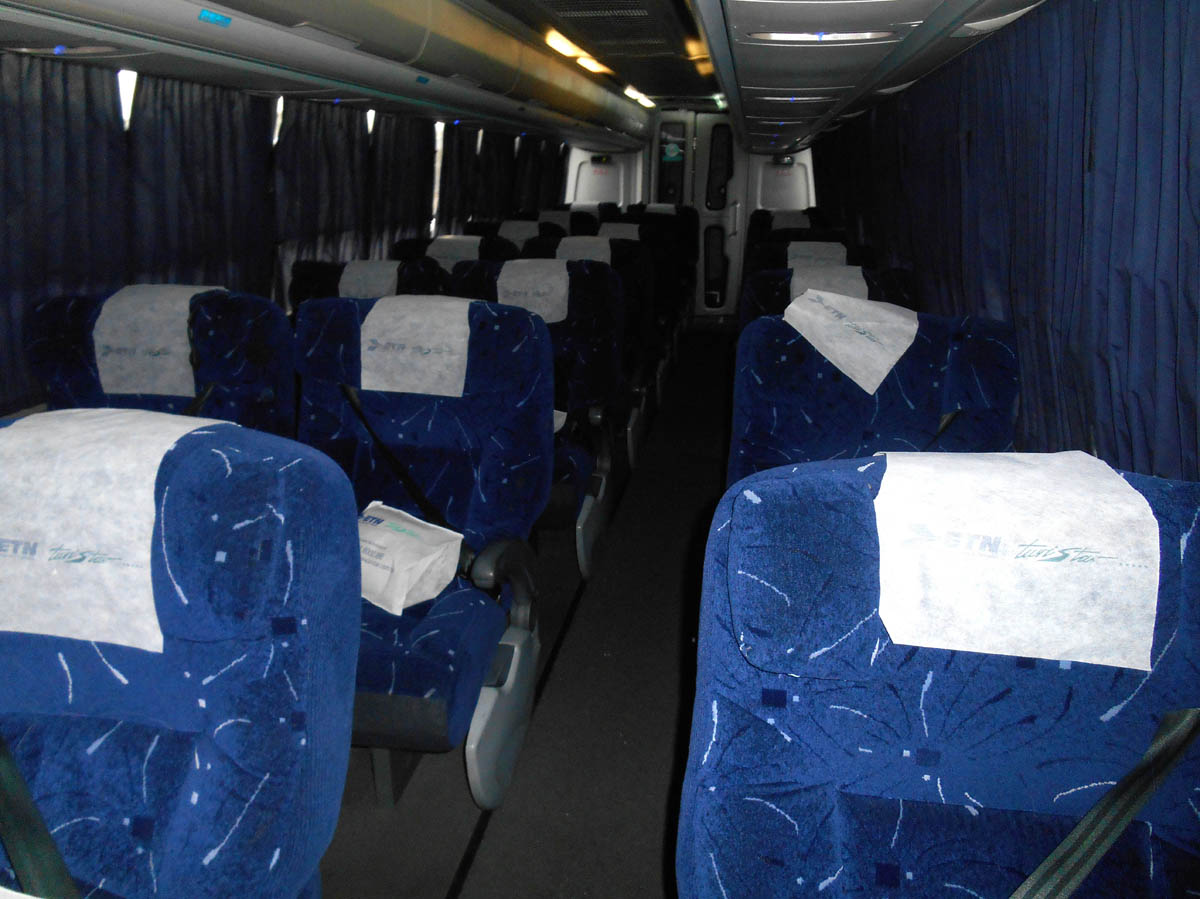 This luxury bus only has 3 seats across, and 6 rows for extra leg room. 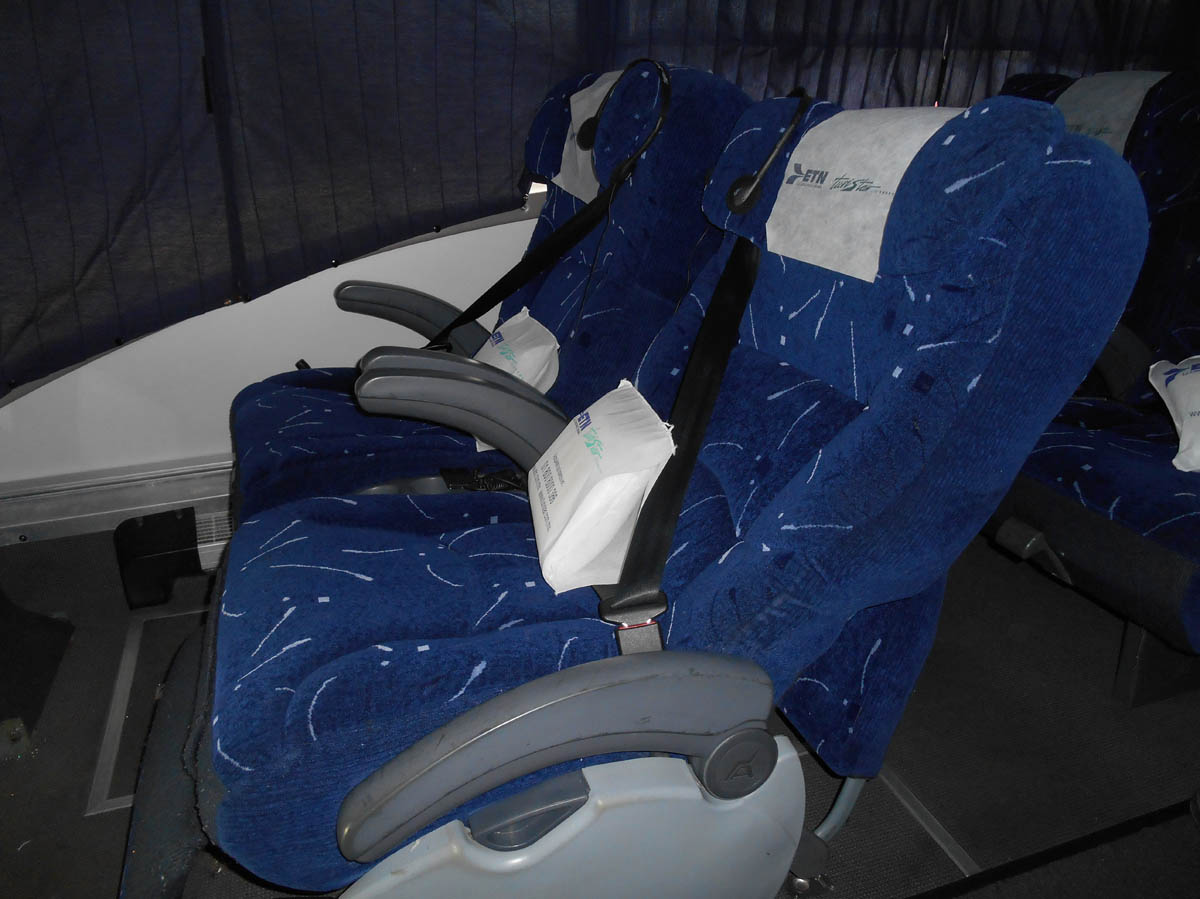 All seats have pillows and leg rests. 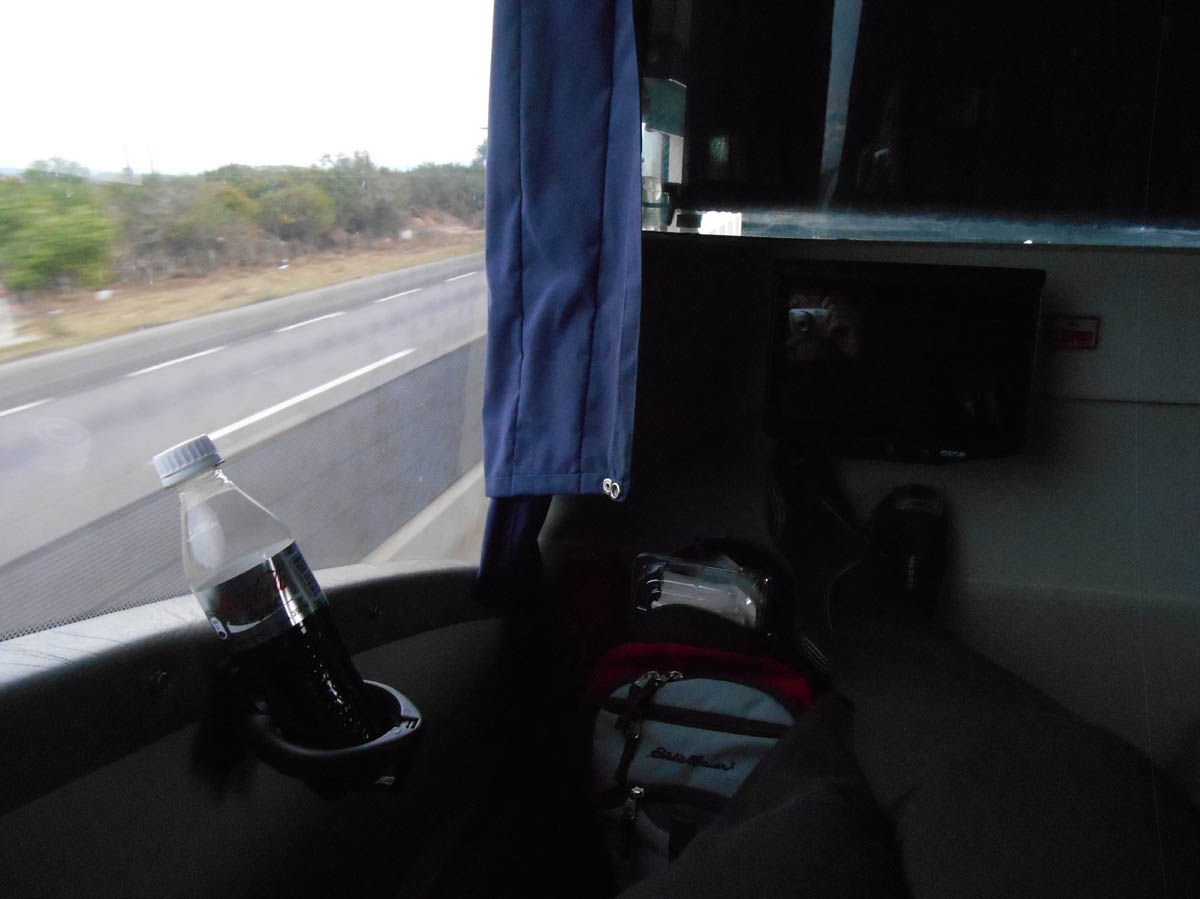 Plenty of room to stretch out and watch the scenery unfold… 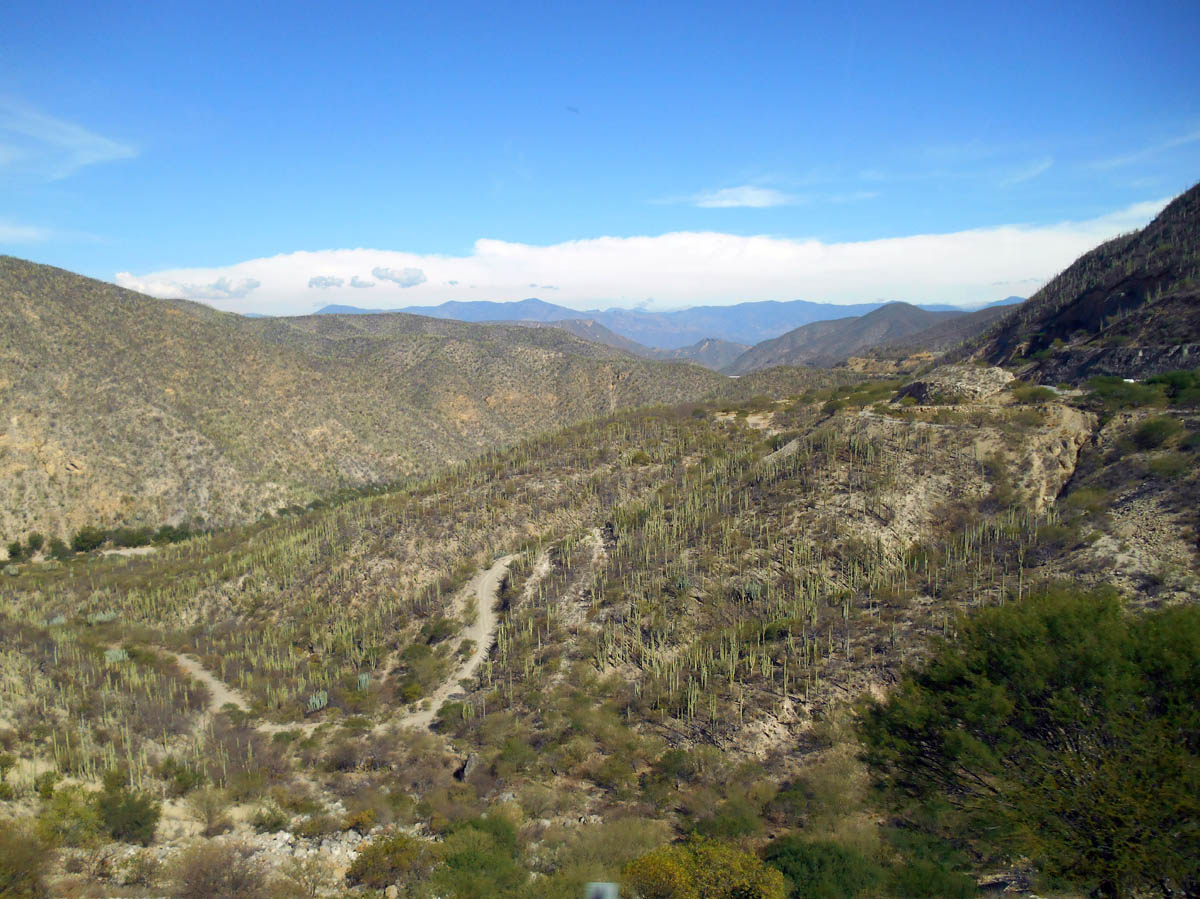 Tough to see, but the countryside is covered in hundreds of cacti. 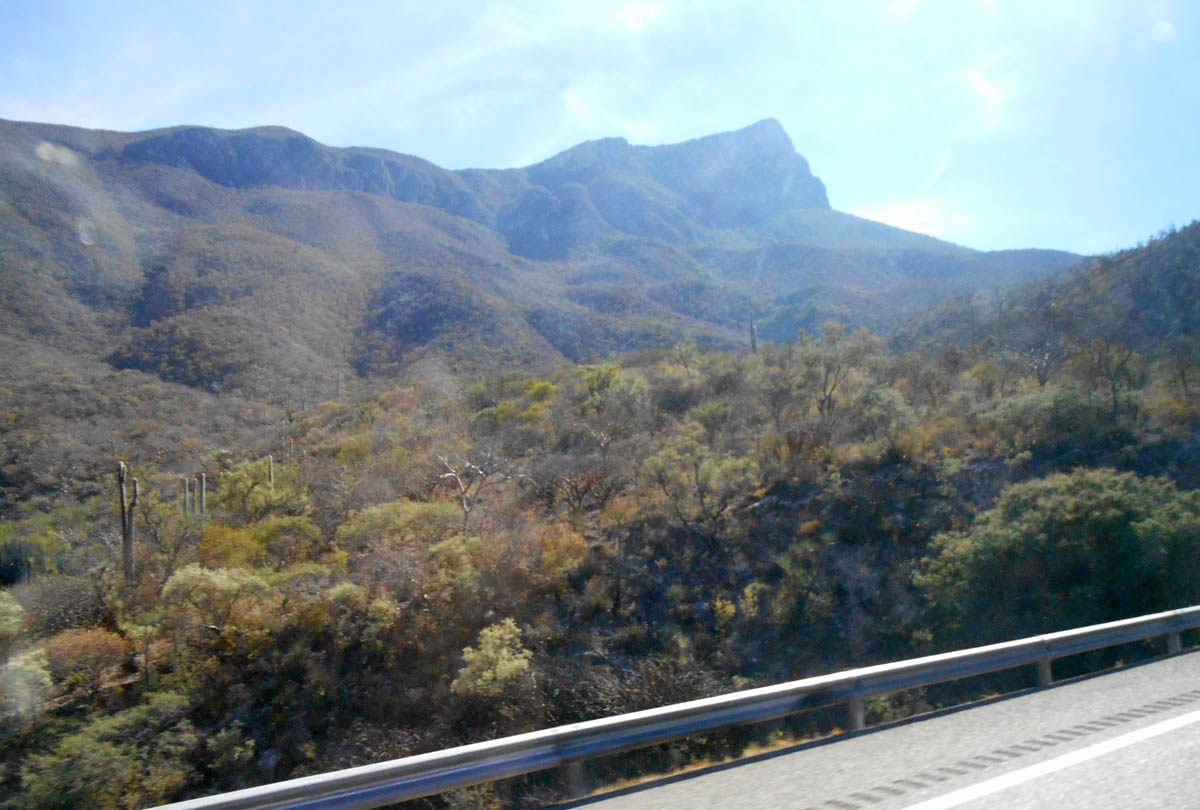 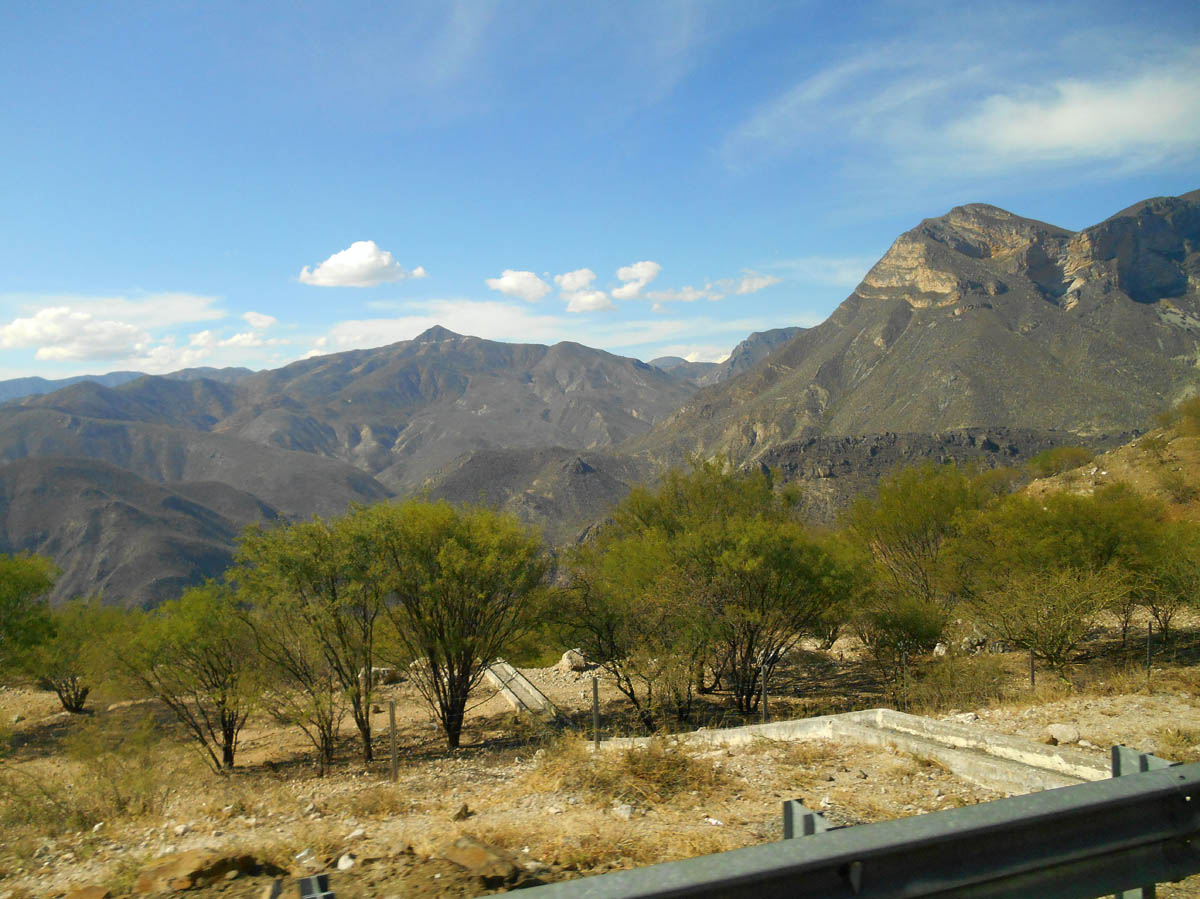 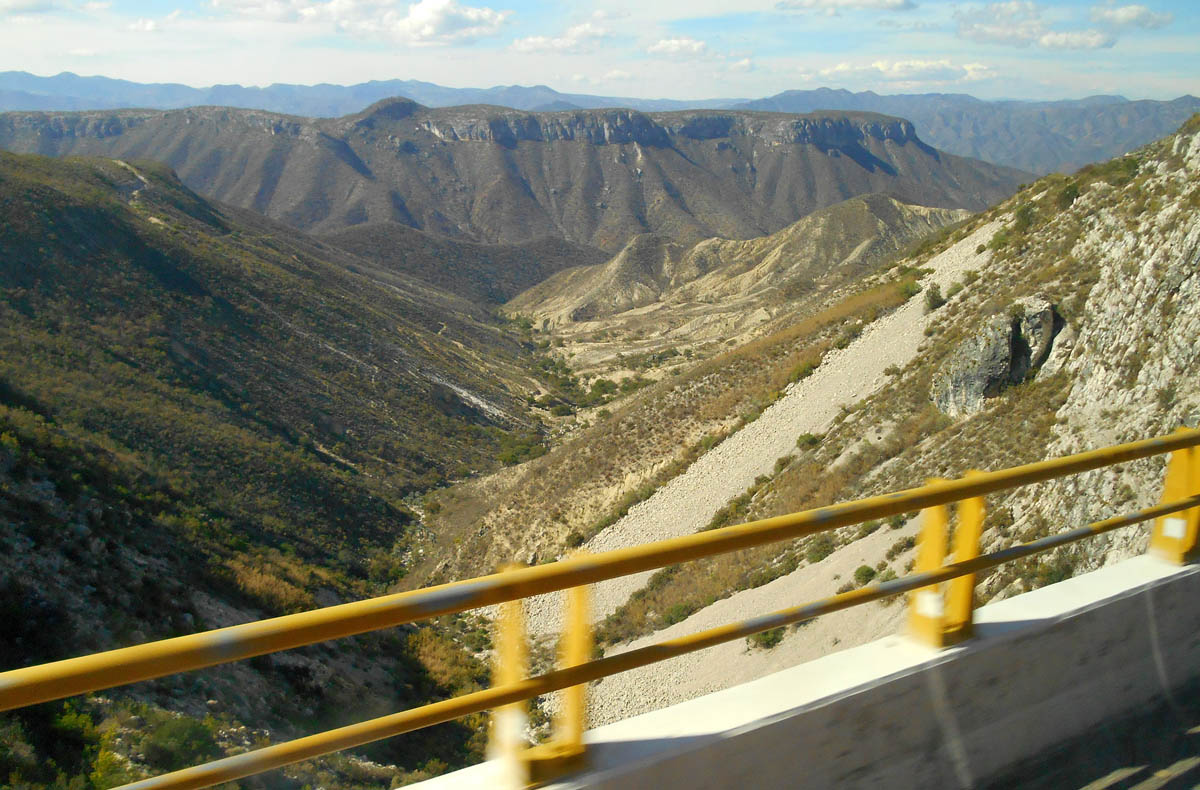 Highway 135 between Mexico City and Oaxaca 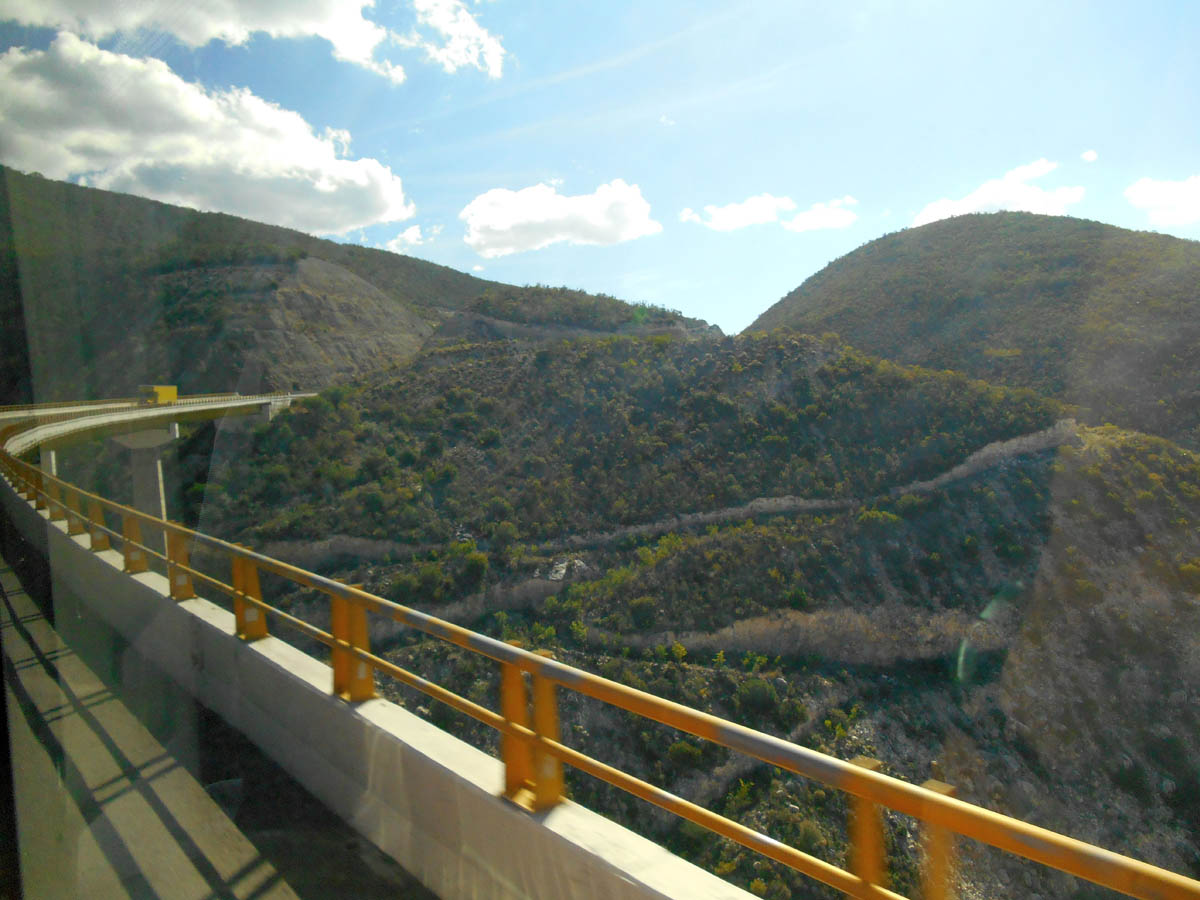 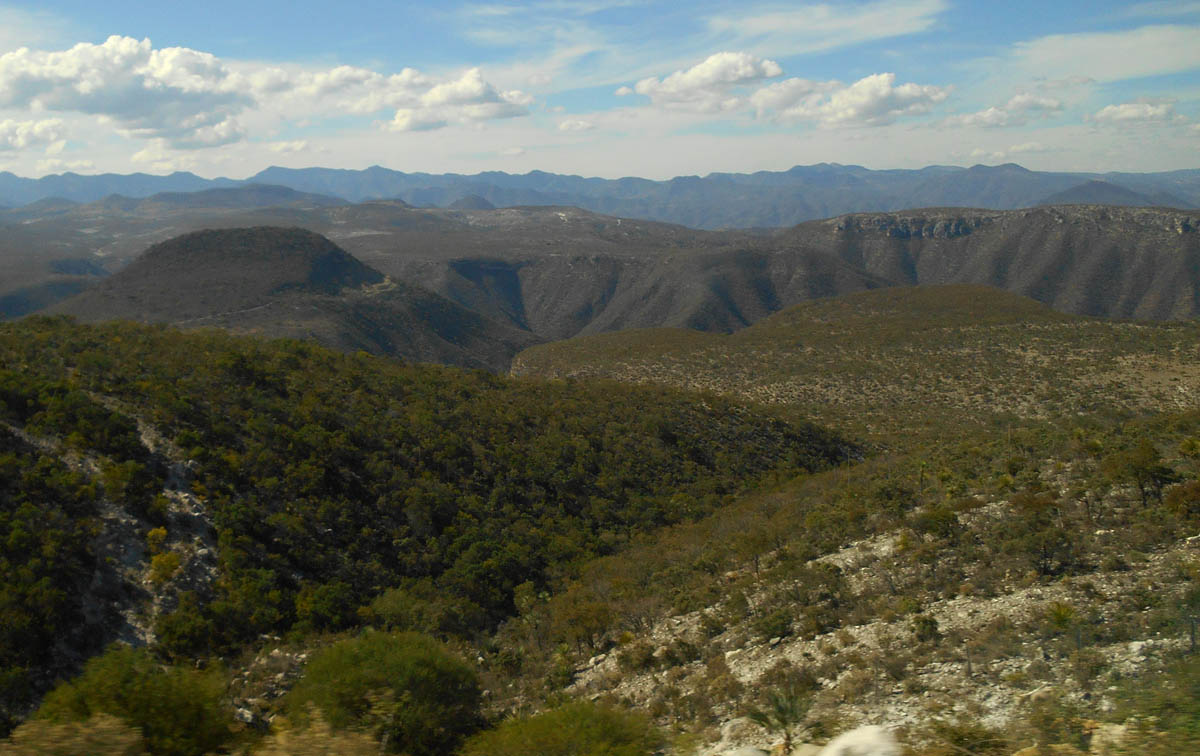 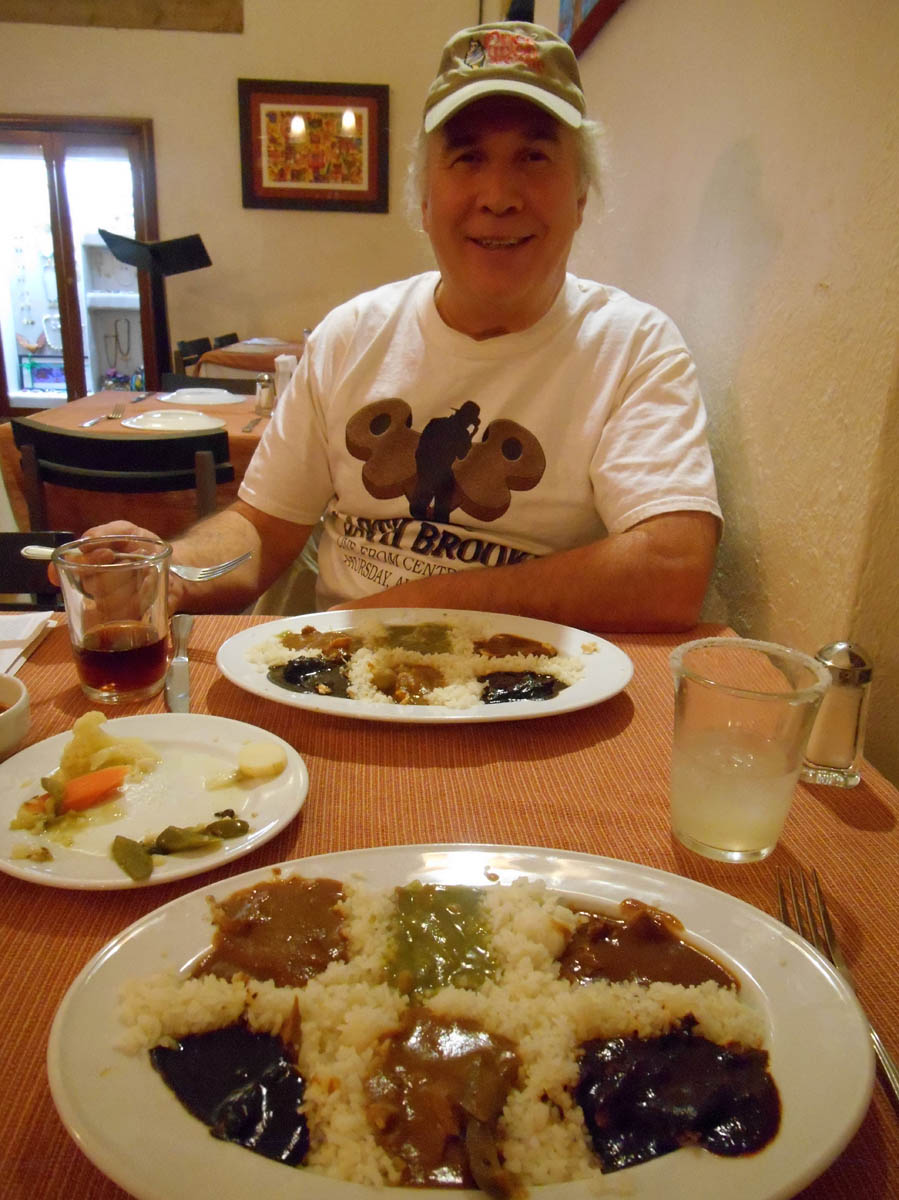 Oaxacan Moles — definitely “heaven” and worth the ride!

12 thoughts on “The Mexican Bus – Heaven or Hell?”