When I was in Jersey City last September visiting with so many good friends, I got a little behind on the blog because there were so many people to see and old haunts to revisit.    Yet one of my favorite days while there never made the blog.   Now, my dear beautiful friend Paige is in the hospital, weighing heavily on my mind.  So I am inspired to go back and finish one of my best memories…

It was over dinner of burgers and brews at the White Star Tavern with two of my sailing buddies, Dan and Paige, when Paige announced, “We are beekeepers now!”  They bought a bee hive. 500 bees.  In Jersey City.  On their third floor rooftop.  Who knew there were “penthouse bees? “ 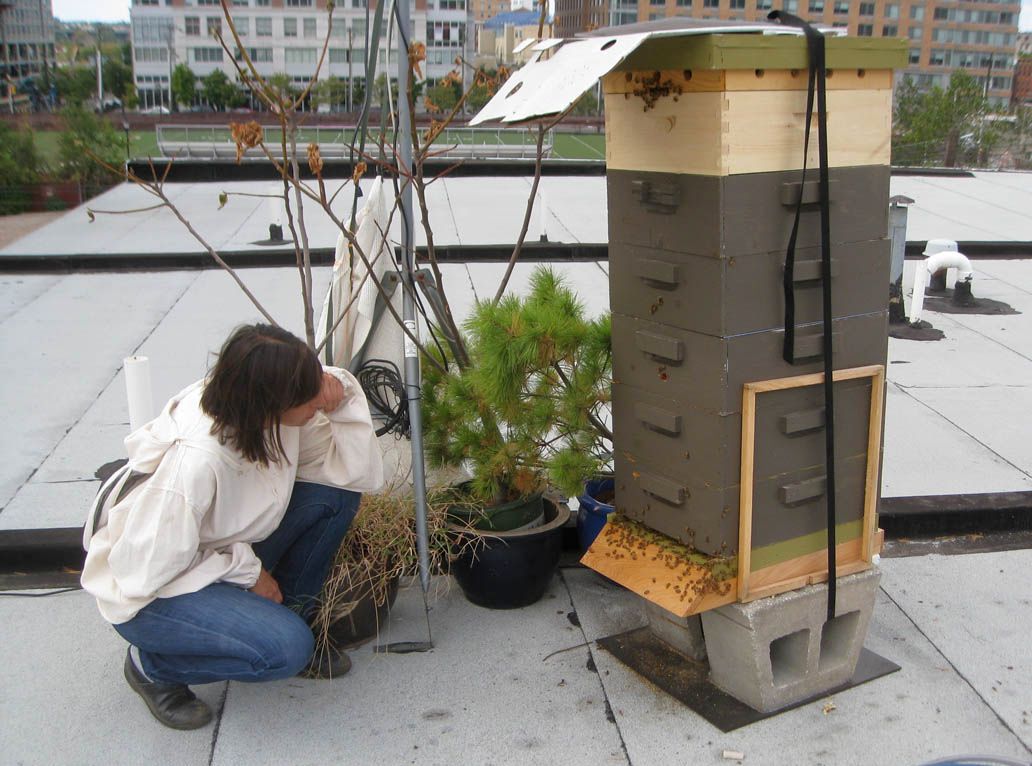 Paige says, “Dan is going out of town.  I need to open up the hive on Sunday to inspect it, if you want to come help.”  I am always fascinated by the creative living spaces that can be found on the rooftops of a metropolis.  Who could resist such an invitation?

Paige told me to arrive around noon, the warmest part of the day when the bees were out foraging.  “Don’t worry, they won’t sting you” she reassured.  “I have a smoker.   But wear thick, long pants, heavy socks, and closed shoes, just in case.”    Could they sense my fear already?? 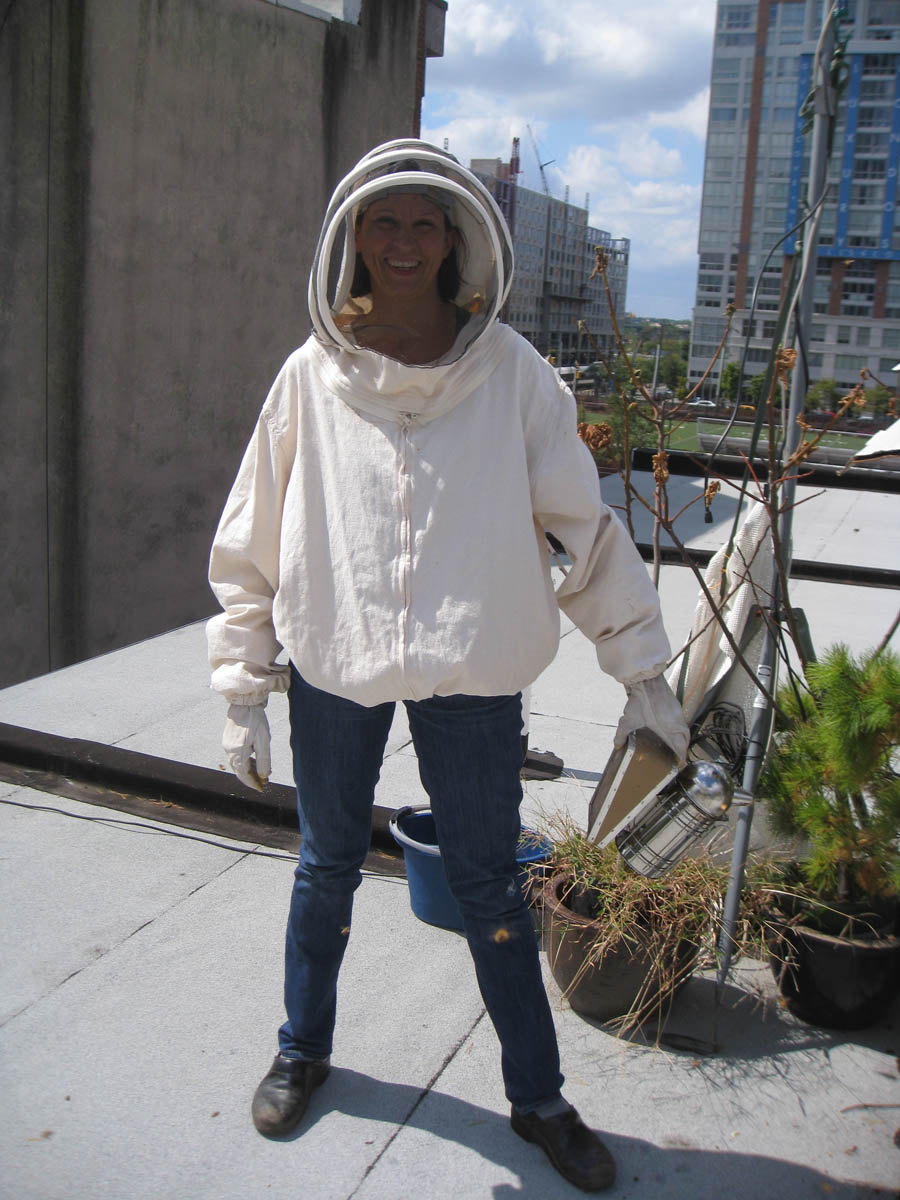 Somehow, despite my posing attempts, “The Look” was lost on me. 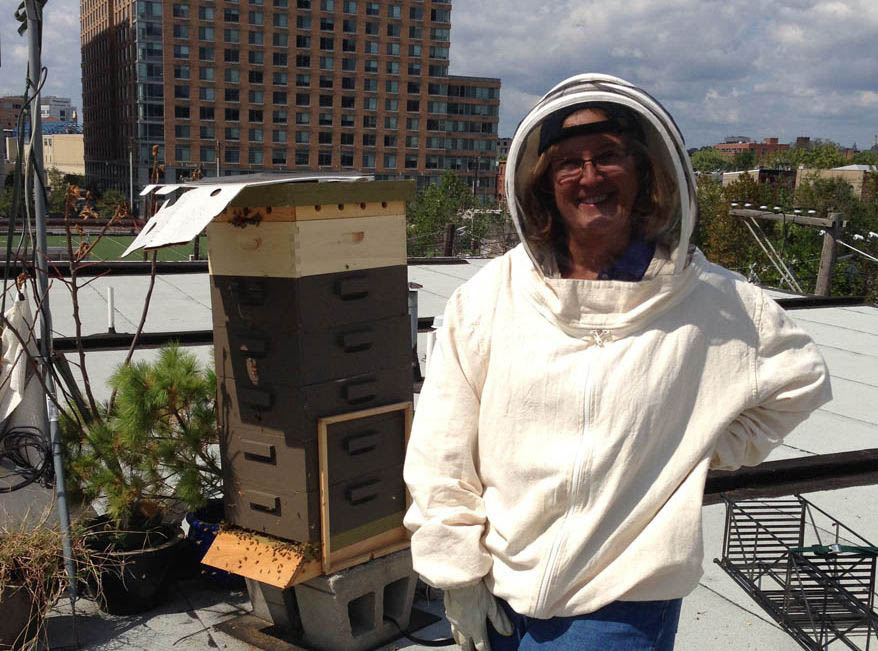 We would first have to separate all the different levels of the hive.  There is such a fine art to this, first removing wax that the bees used to securely seal the cracks, which requires a special tool to scrape the wax without damaging the hive…or the bees!   Wood glue could not have done a better job. 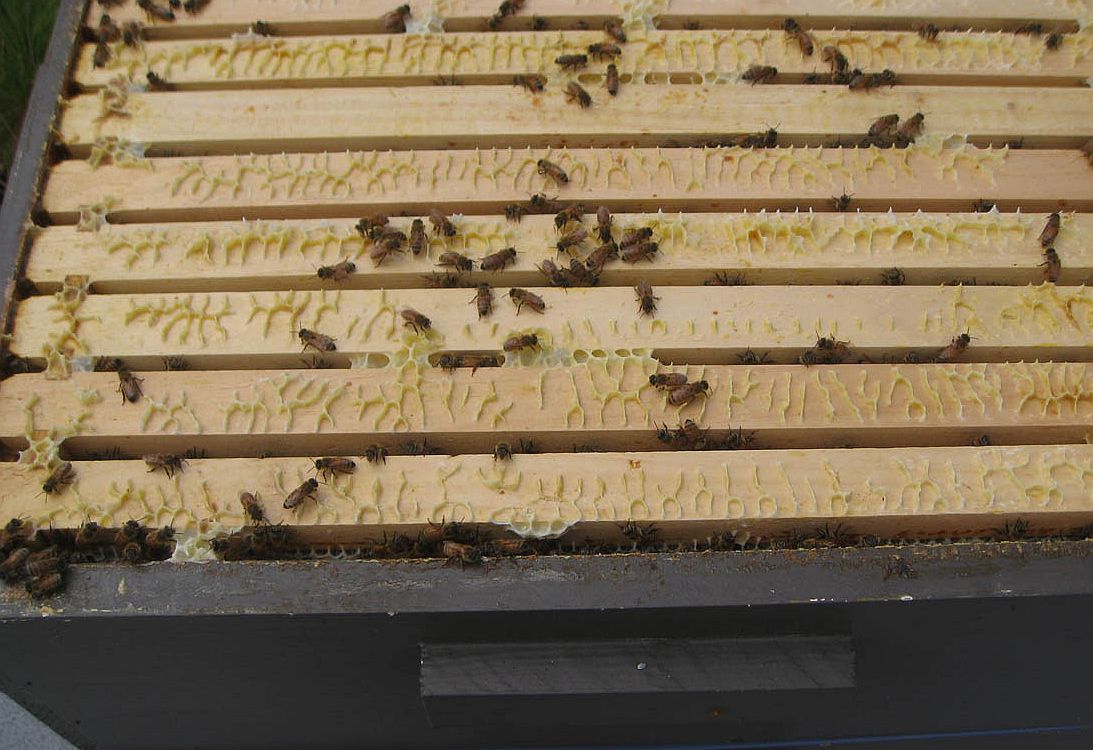 Beeswax acts like glue to seal the supers and frames together

Next, we separated each of the sections, which previously I had assumed to be all the same.   But each box (“super”) has a specific purpose, with supers for the “brood,” (babies) supers for the honey, and a “queen excluder” in between to prevent the queen from laying eggs in the honey.    The objective is to keep the baby-making and the honey-making separate, so it allows the “worker bees” (female bees) to move freely back and forth between the levels, while the queen is too large to fit through the hole to ascend up to the honey super. 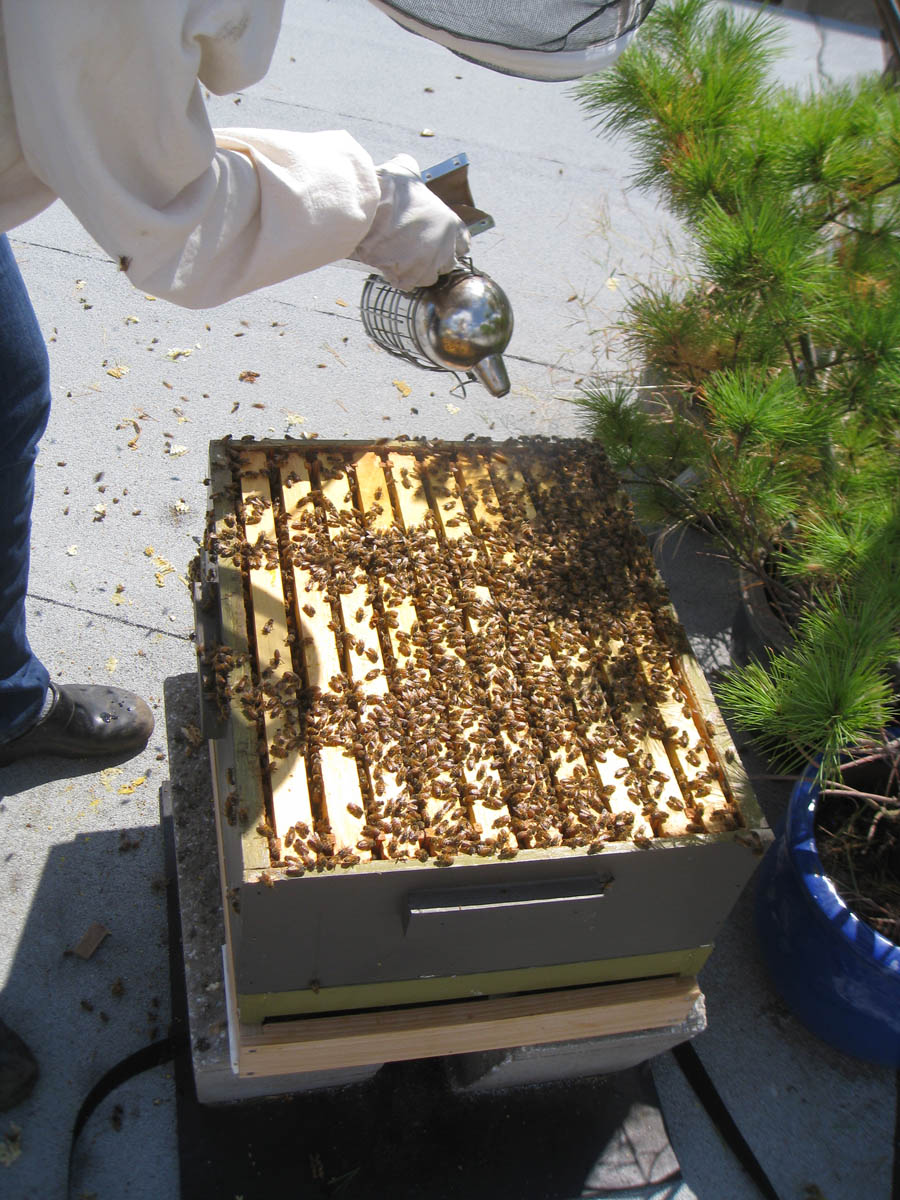 The smoker in action…

Our main objective in opening up the hive was to check for the Varroa mite, which feeds on pupae, or developing bees.   We would be removing the tops from a few capped cells, pulling out the pupae (pu-eeewww!!-pa) and checking for the reddish brown dot the size of a pin head. 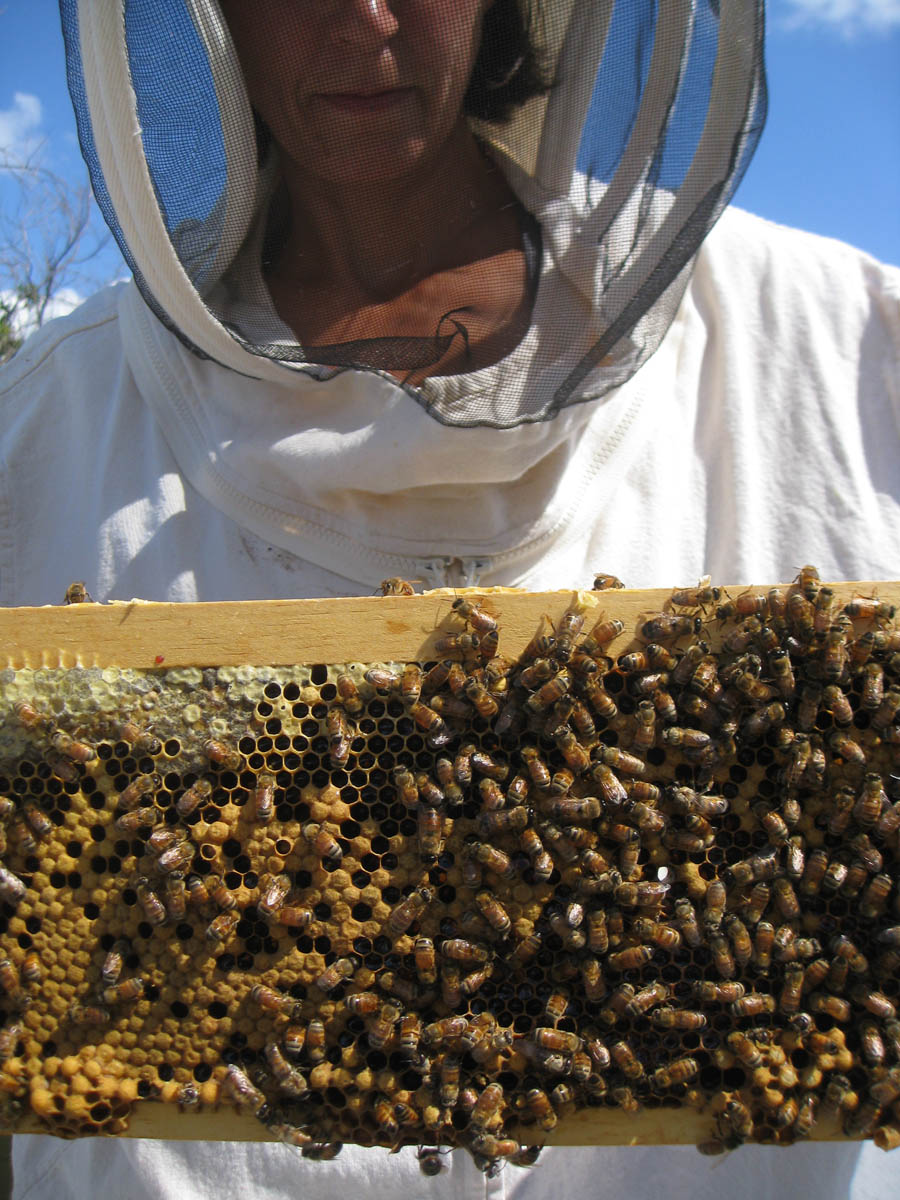 As the hive was being opened, my job was that of “smoker,” as Paige inspected each of the frames.   Smoke is projected from the little metal can by squeezing bellows to force air over the burning cotton batting.    The smoke masks the smell of pheromones being emitted by the “guard bees” as the hive is disassembled.  Being overwhelmed by all the bee activity happening around me, I gauged the success of my job by the speed, volume, and pitch of those three words, “SMOKE! SMOKE!!  SMOOOOKKKE!!!” coming from Paige’s mouth.    In my adrenalin-infused state I was so over-zealous at my job, the next morning I felt like I had a “pack-a-day” habit! 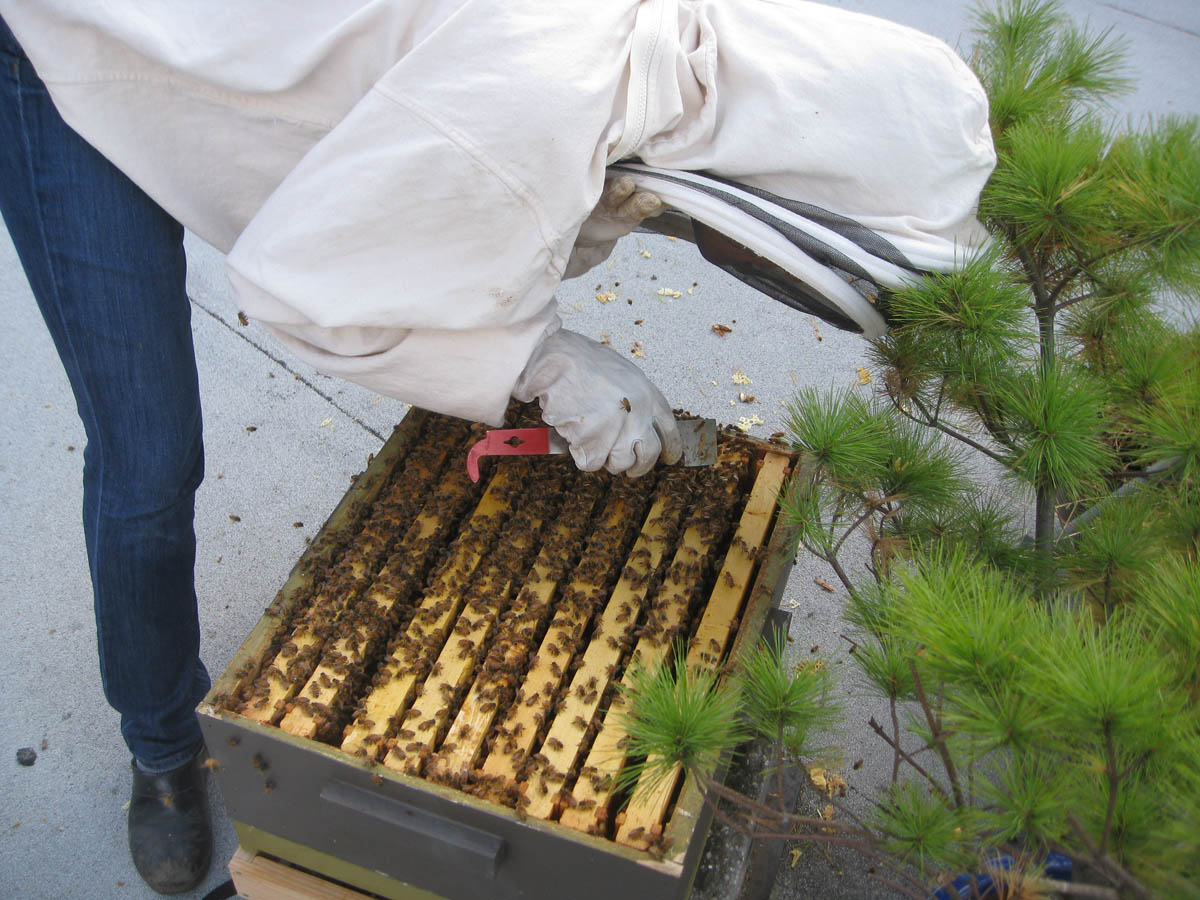 “Smoke, Smoke, SMOKE!!!” Paige directs, as she works to separate the bee-covered frames.

In the end, we did not find any Varroa mites.  That’s the good news.  But we didn’t find the queen either.   Not so good news.   Dan and Paige would later locate her on a follow-up mission, but the number of brood in the hive was less than anticipated.   An under-producing queen, or a queen not readily accepted by her hive, can cause the bees to swarm or to kill the queen and anoint one of their own.  Therefore, she had to be replaced.   A cruel twist of fate met in between the grips of a pair of needle-nosed pliers.

The original intent was to leave the honey intact because it serves as a food source for the hive over the winter.   With pollen and nectar all but nonexistent during winter months, not enough honey can lead to starvation of the hive.  But as we began to reassemble the hive, Paige said, “You know what?   I am not going through all of this without ‘A taste of honey!”   So she carefully removed one of the comb-covered frames from the honey super, still covered in bees.    Now, how to remove bees from a honey frame?? 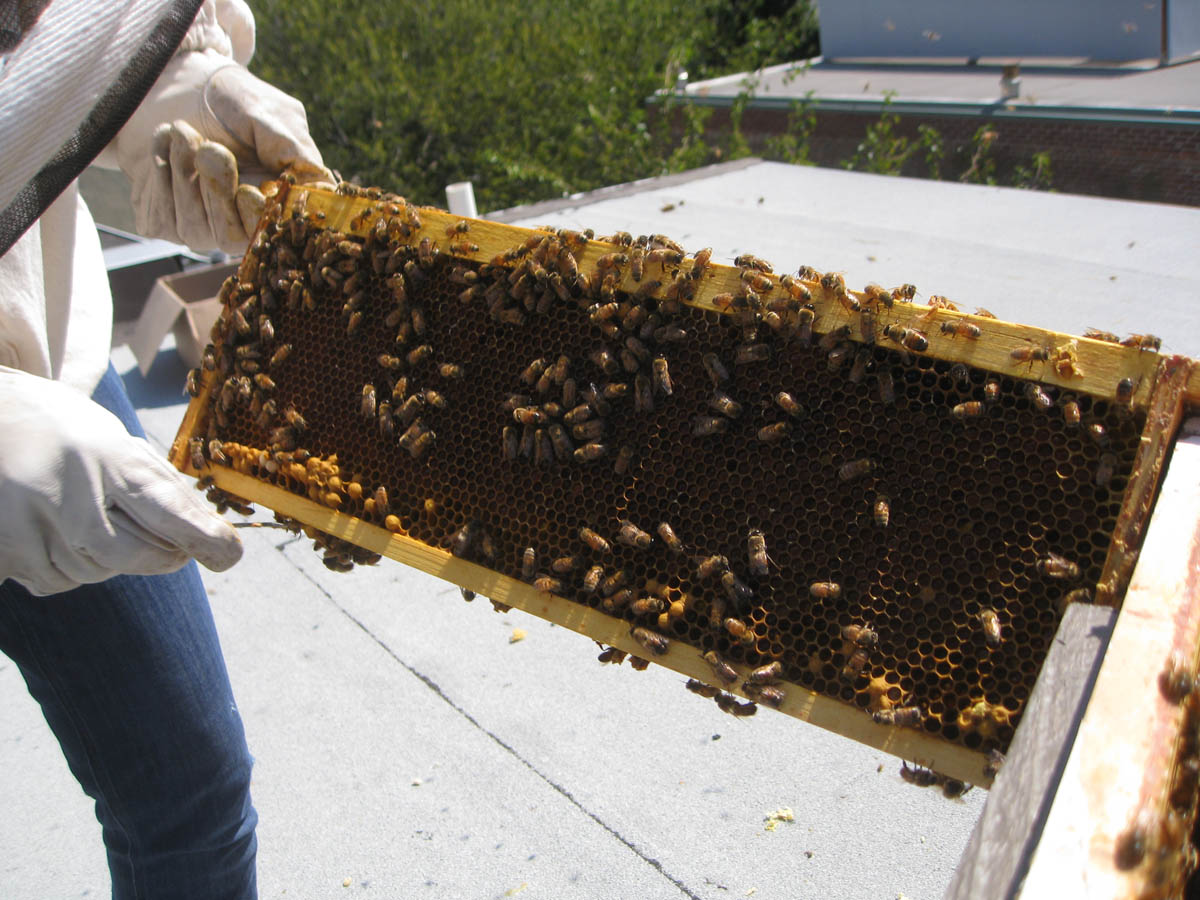 Paige walks over to the edge (Did I mention there is NO RAILING along the edge??) and WHAAAACCKS the frame on the side, sending what looked like a swarm of about a thousand bees down to her neighbor’s deck.  We stood and watched as they reversed directions mid-flight, now returning to the hive.  Standing on the very edge of the roof in their direct flight path, I paused only for a split second to check my direction before taking off to run toward the opposite side of the hive, careful not to panic and run over the edge!    😉 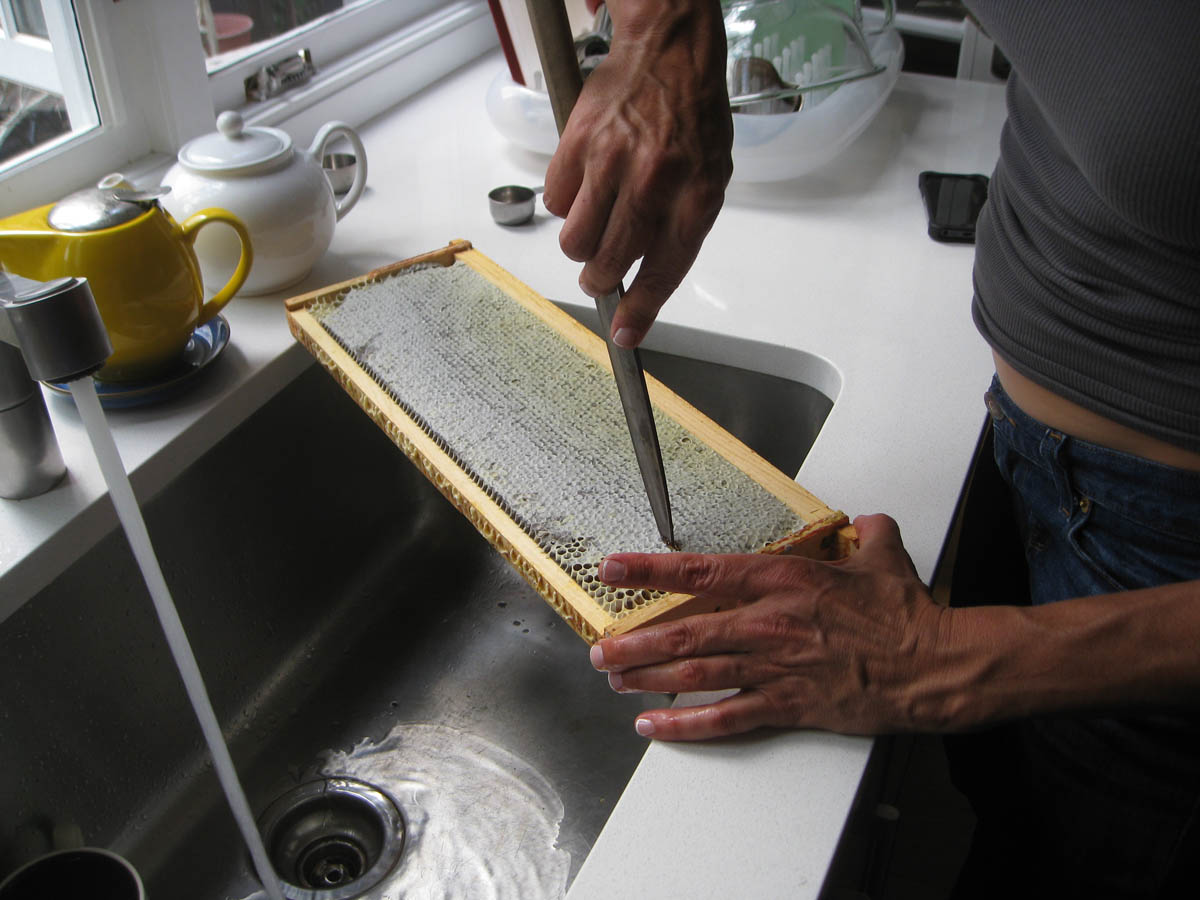 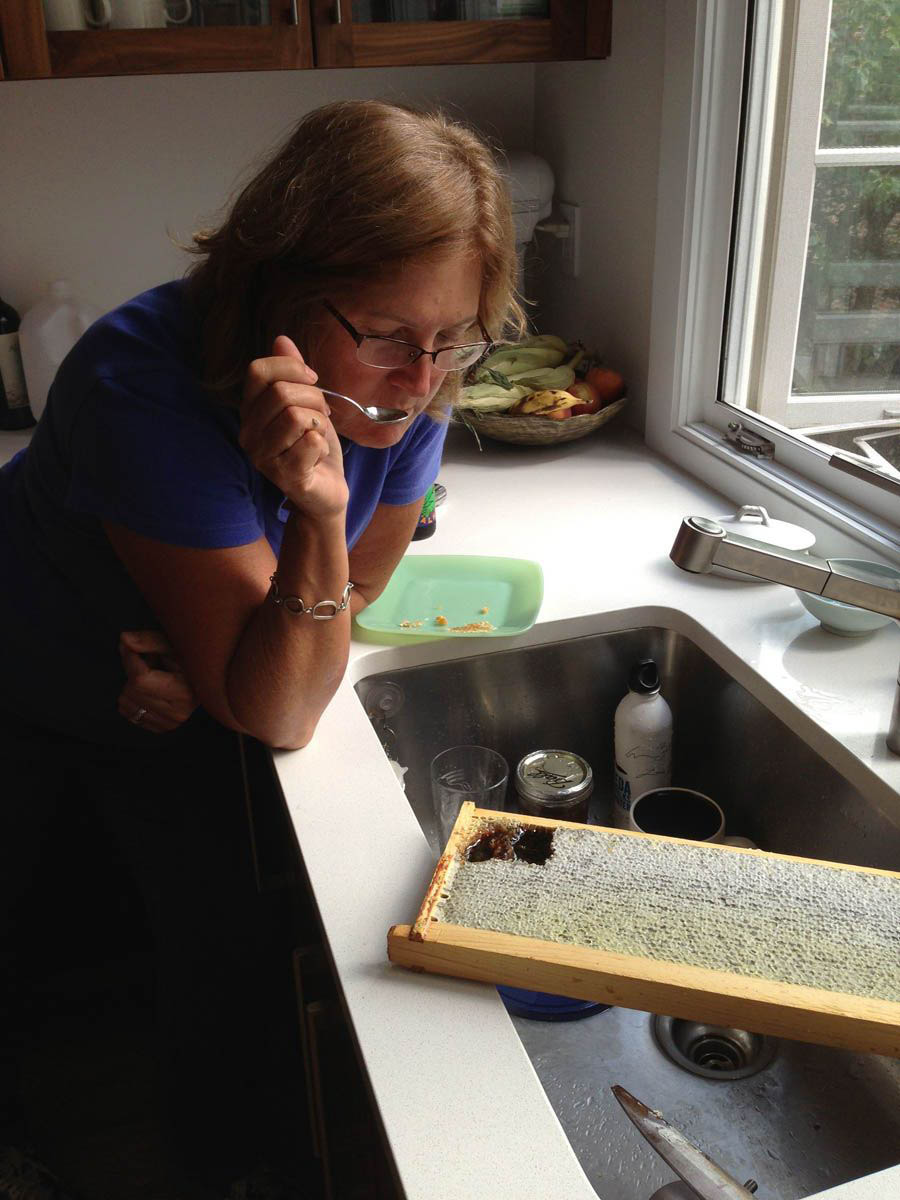 We took the frame containing the luscious, deep caramel-colored honey down to the kitchen and decanted it as if it were a fine wine, savoring a few drops at a taste, pointing out the “delicate undertones” of caramel and pine. 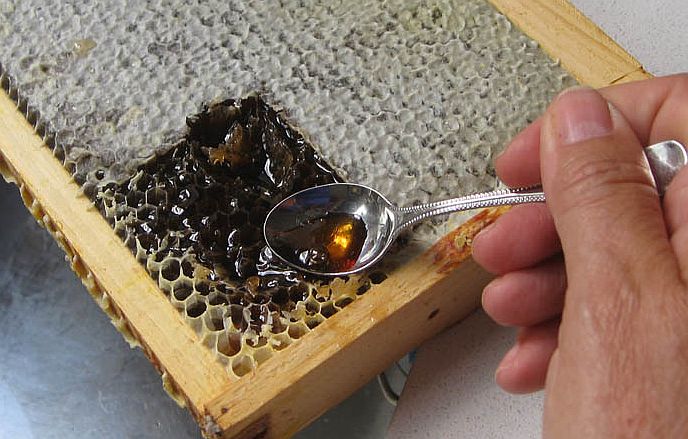 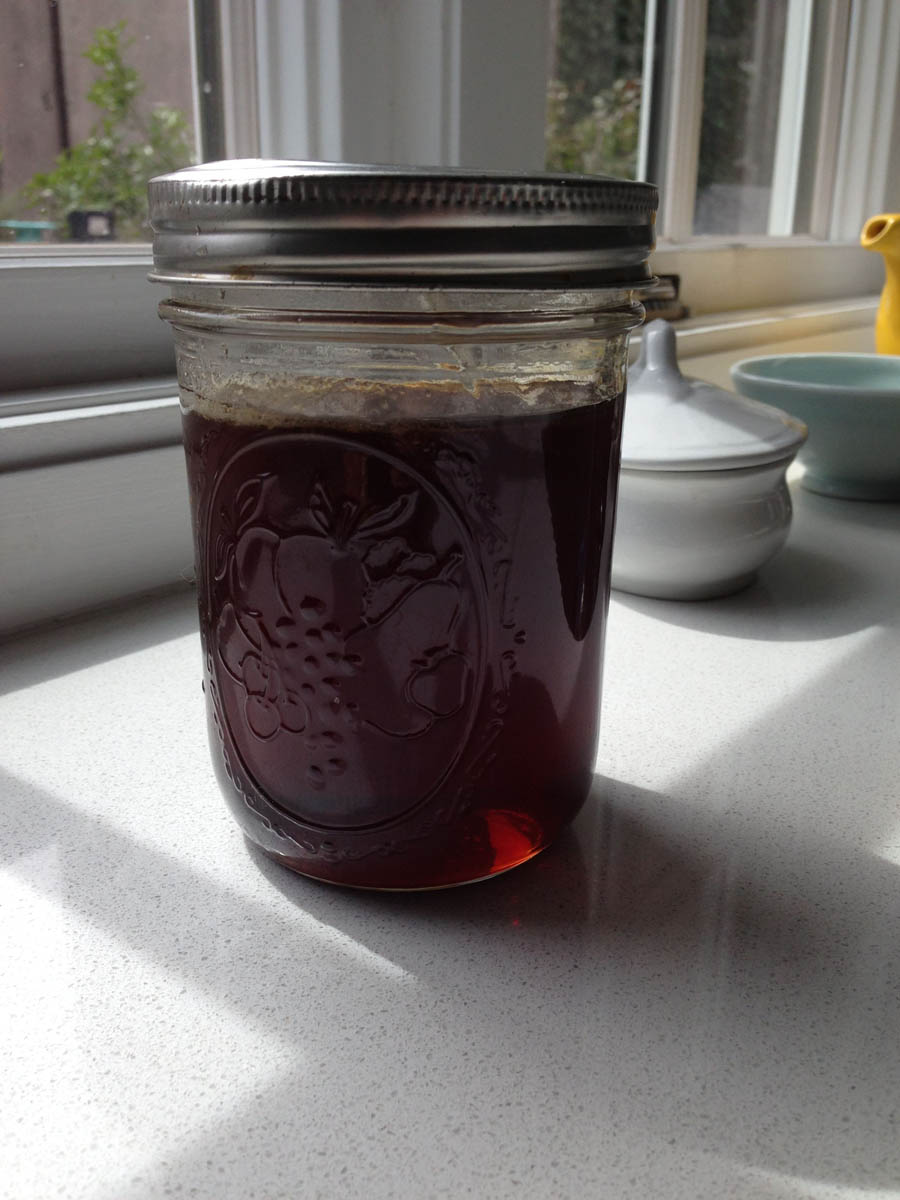 Now having a whole new appreciation for what takes place inside a hive, I can say there is nothing sweeter…except for the news that my dear friend will soon be out of the hospital. 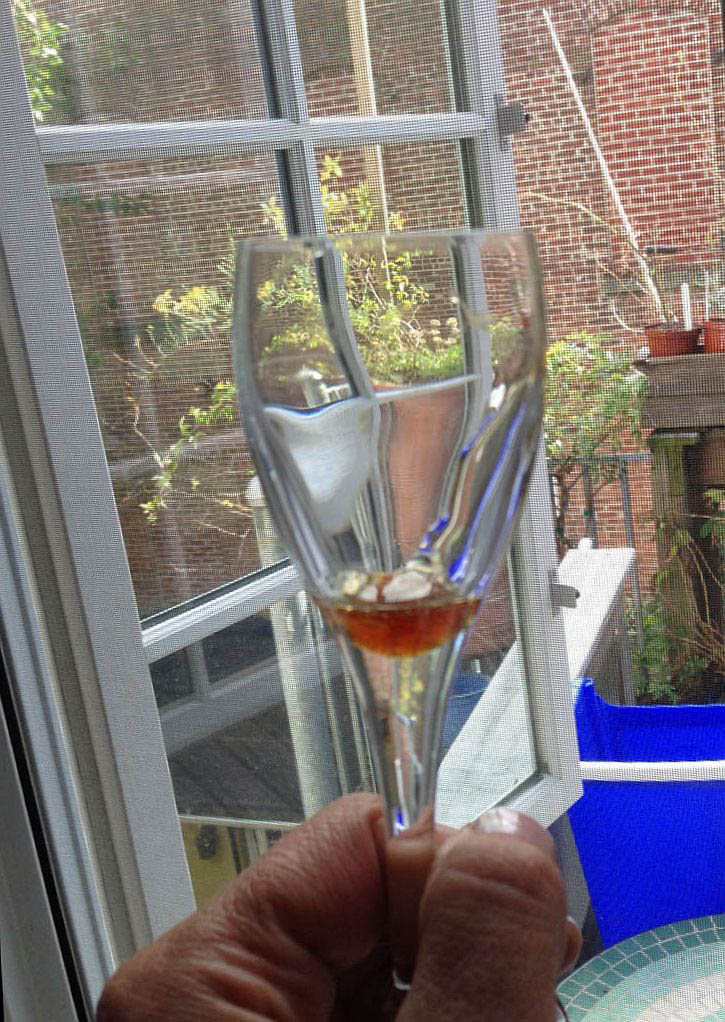 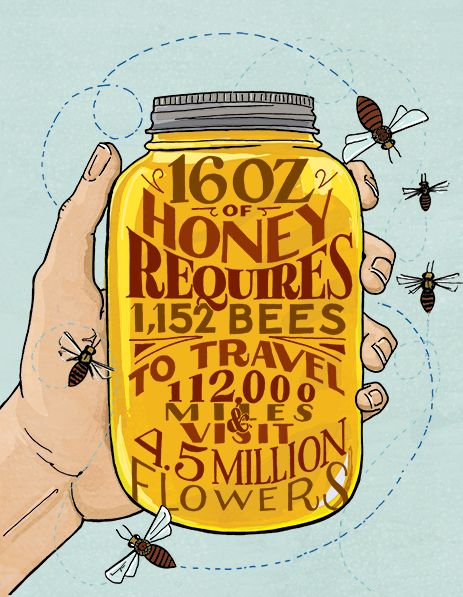