Continuing on with my “Big Ben Top Ten” series, here is the next installment.   Thanks to those who are following along with my Top Ten countdown, even though it may be somewhat predictable.  😉

4. GRAPEVINE HILLS TRAIL – This 2.2 mile hike starts six miles down one of the gravel roads.  It didn’t start out to look like much, as most of the trail was through a sandy wash, and was a bit boring.  But once we reached the end of the wash, there is a .25 mile “scramble” up some massive boulders to reach the balanced (and very phallic) rock.  These rocks are juxtapositioned  to create a “window” looking out over the boulder-strewn valley below.

The end of the trail and beyond was strewn with massive round boulders, such a stark contrast to the angular layered limestone we had seen throughout the park.  The trailhead marker refers to these boulders as “petrified fire,” when molten rock ballooned up beneath the earth’s surface in a dome, which was later stripped away by erosion to reveal the massive boulders. 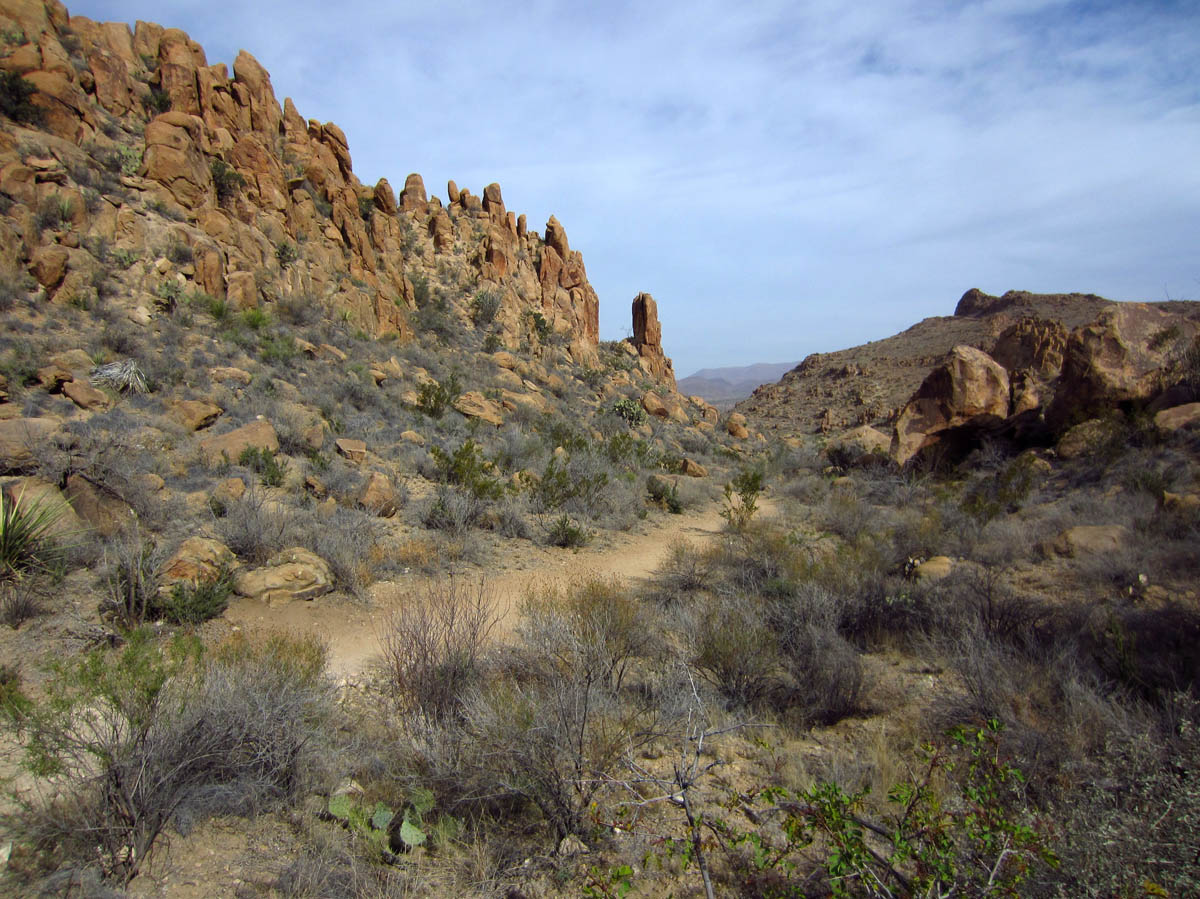 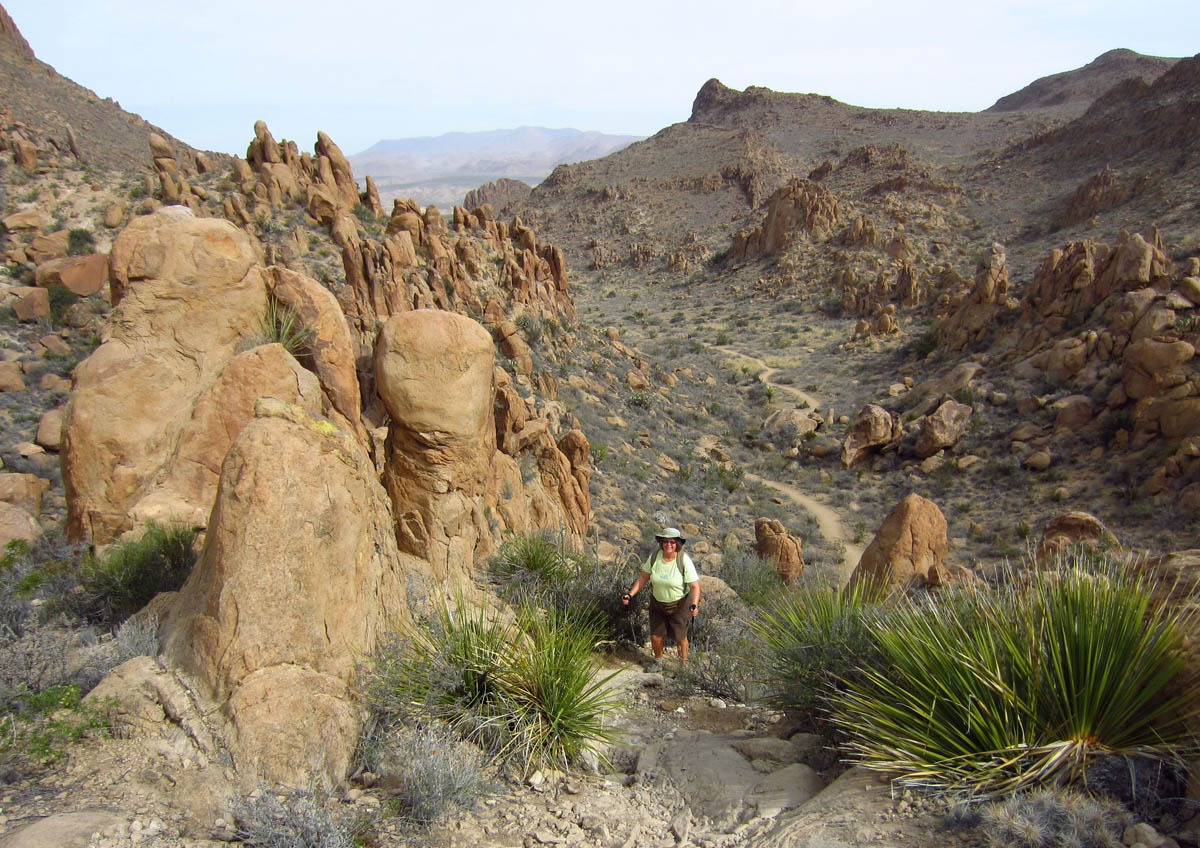 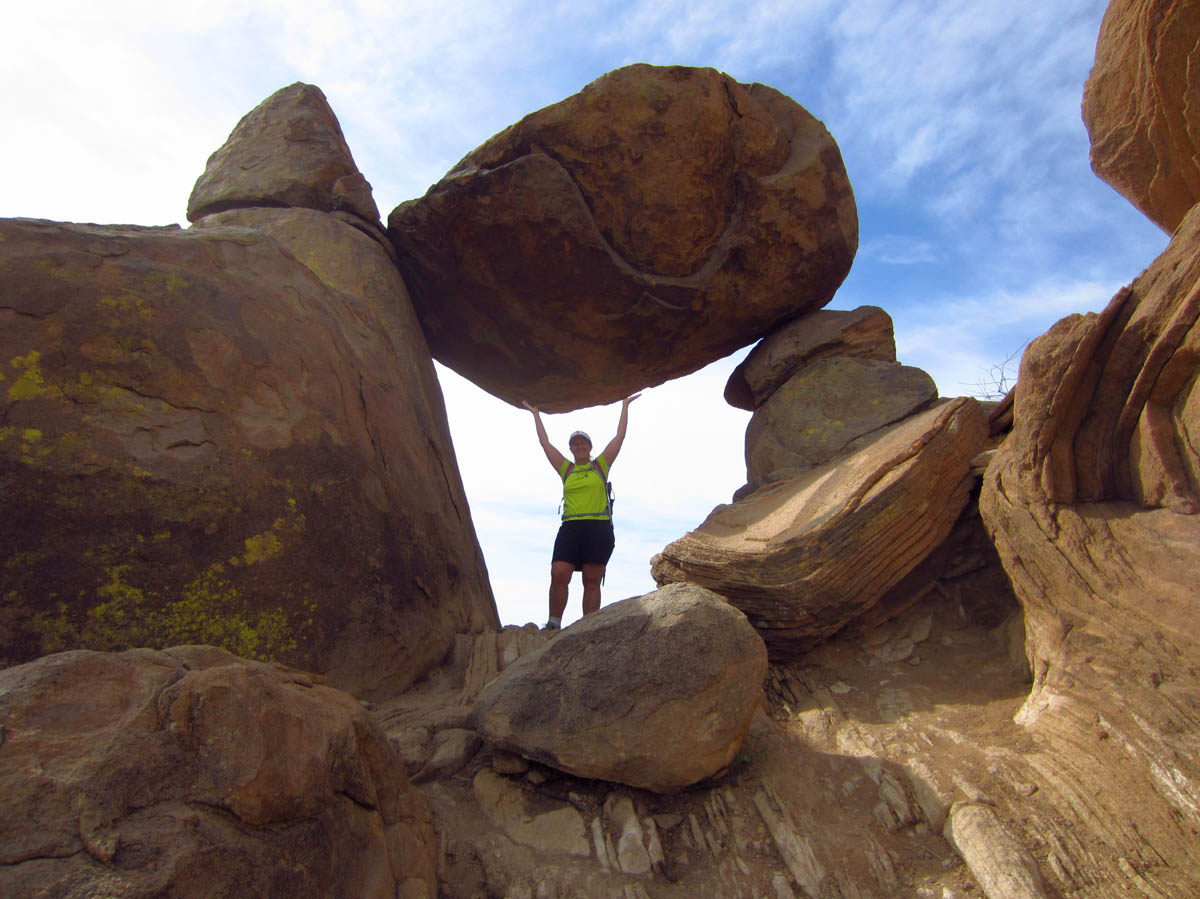 Hamming it up to maintain my reputation as a tourist. 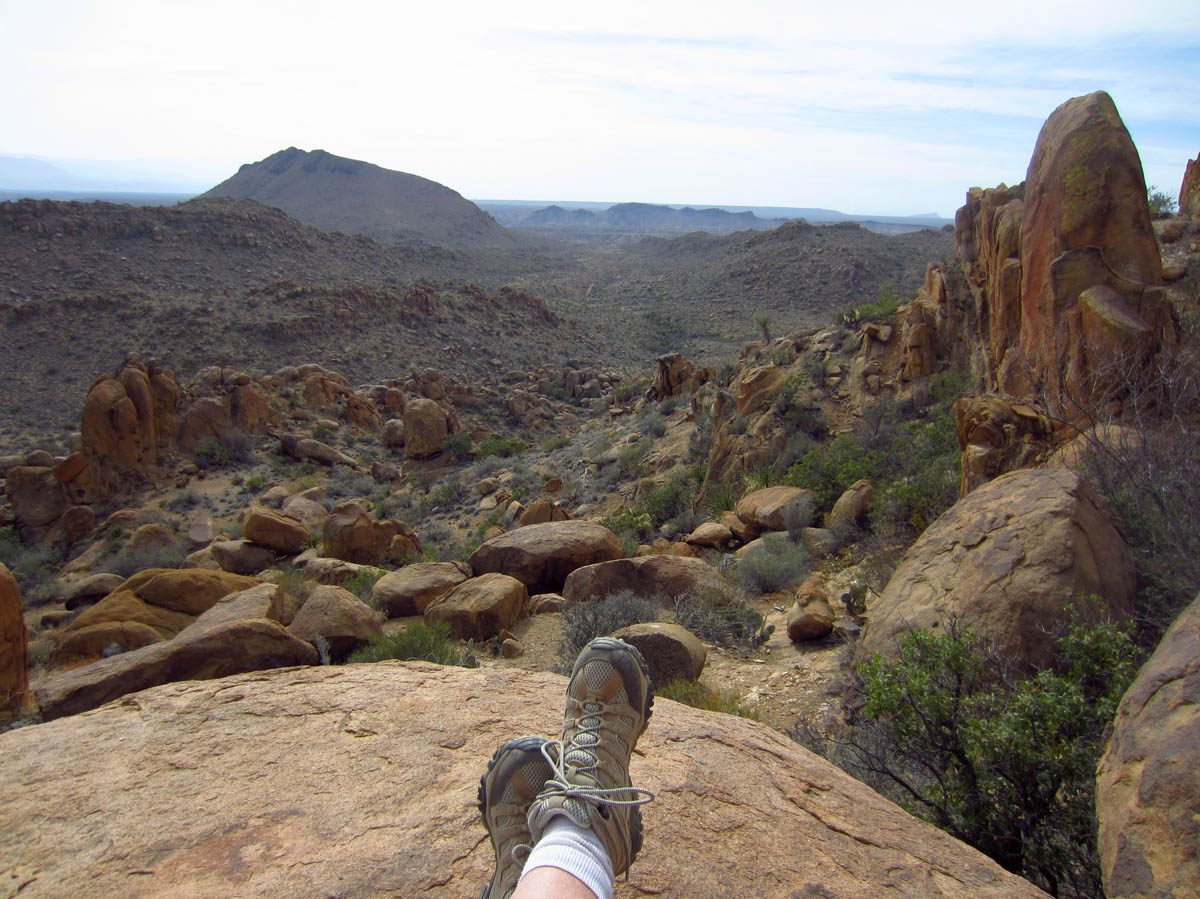 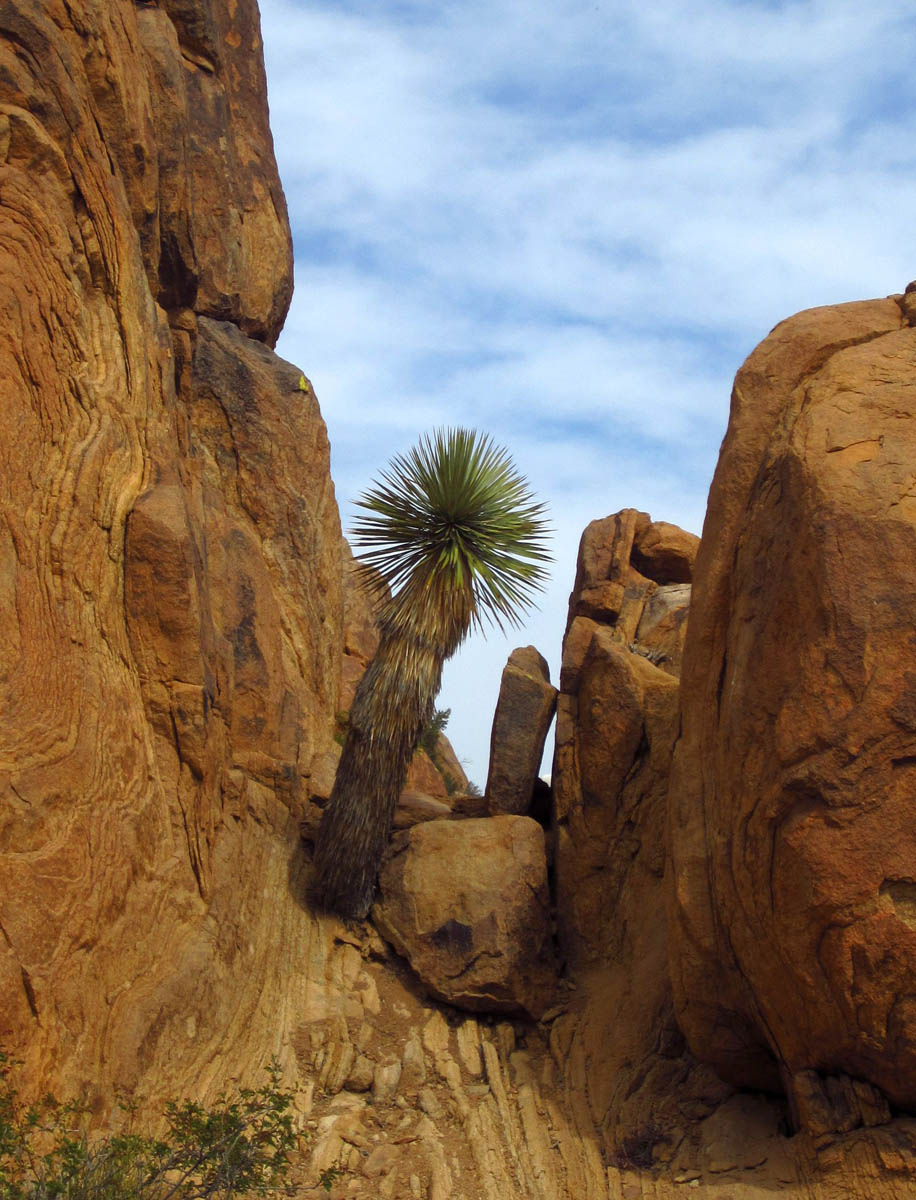 I would have given the “Grapevine Hills” trail a different name…

3.  THE WINDOW TRAIL – There are two versions of the “Window.”  There is the 4.5 mile trail to the opening in the rocks at the top of the Window “pour-off,” and there is the Windows Vista, which overlooks the trail, and offers that famous cut in the Chisos Mountain Bowl that graces postcards and warrants premium seating in the Lodge dining room.   Though we visited the Vista trail several times in search of a sunset, we never could quite get the timing right for the 4.5 mile hike.  Warnings said not to go in the heat of the day, yet we always seemed to arrive too late to make the hike in the late afternoon.  Finally, we got a cloudy day, so we decided the “window” was open for the Window Trail.

The trail was down and down and down again, descending almost 1,000 feet which is never my favorite kind of hike, because I know what’s coming at the end.   Lynne referred to it as a “death march.”  But soon, we reached the tree-filled Oak Creek Canyon, where the trail leveled off amidst piñon pine, Mexican Drooping Juniper, Live Oaks, and many flowering trees.

Toward the end, the trail was flanked by towering cliffs.  A series of CCC-made steps were built to skirt the now dry water holes in the canyon floor, worn by thousands of years of water erosion.  The Window “pour-off” channels all the rainwater out from the Chisos Mountain basin, plunging 200 feet to the desert below.

As we approach the end of the pour-off, it appears that the rocks are wet.  In fact, they are just polished by the force of water to feel as smooth as onyx.   I am reminded of the quote from the Tao, “Water is fluid, soft, and yielding. But water will wear away rock, which is rigid and cannot yield.”

We made three evening attempts to the Windows Vista trail to try and catch a good sunset, but were shut out the first two times with nothing but gray, low lying clouds.  Finally, on our third and final night, we were richly rewarded for tenacity, as the show was absolutely breathtaking. 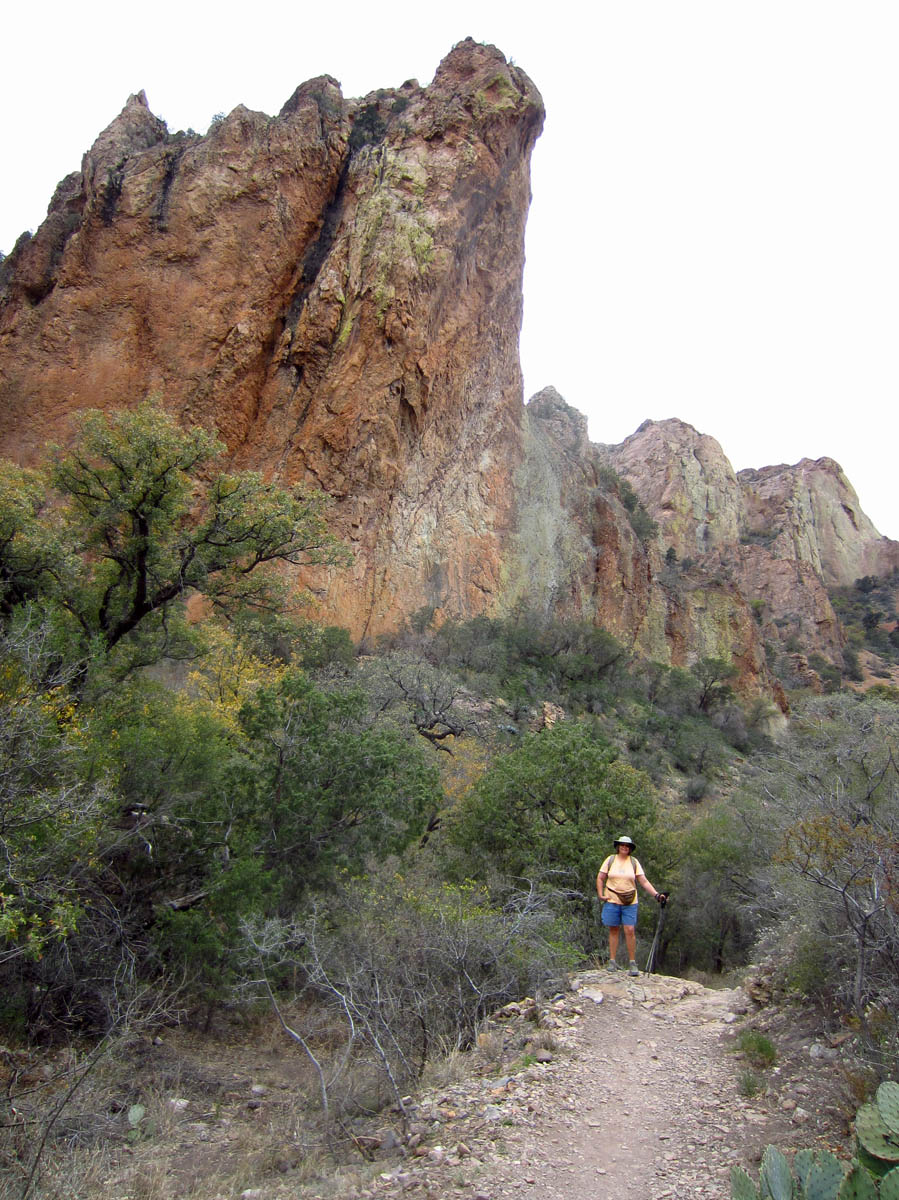 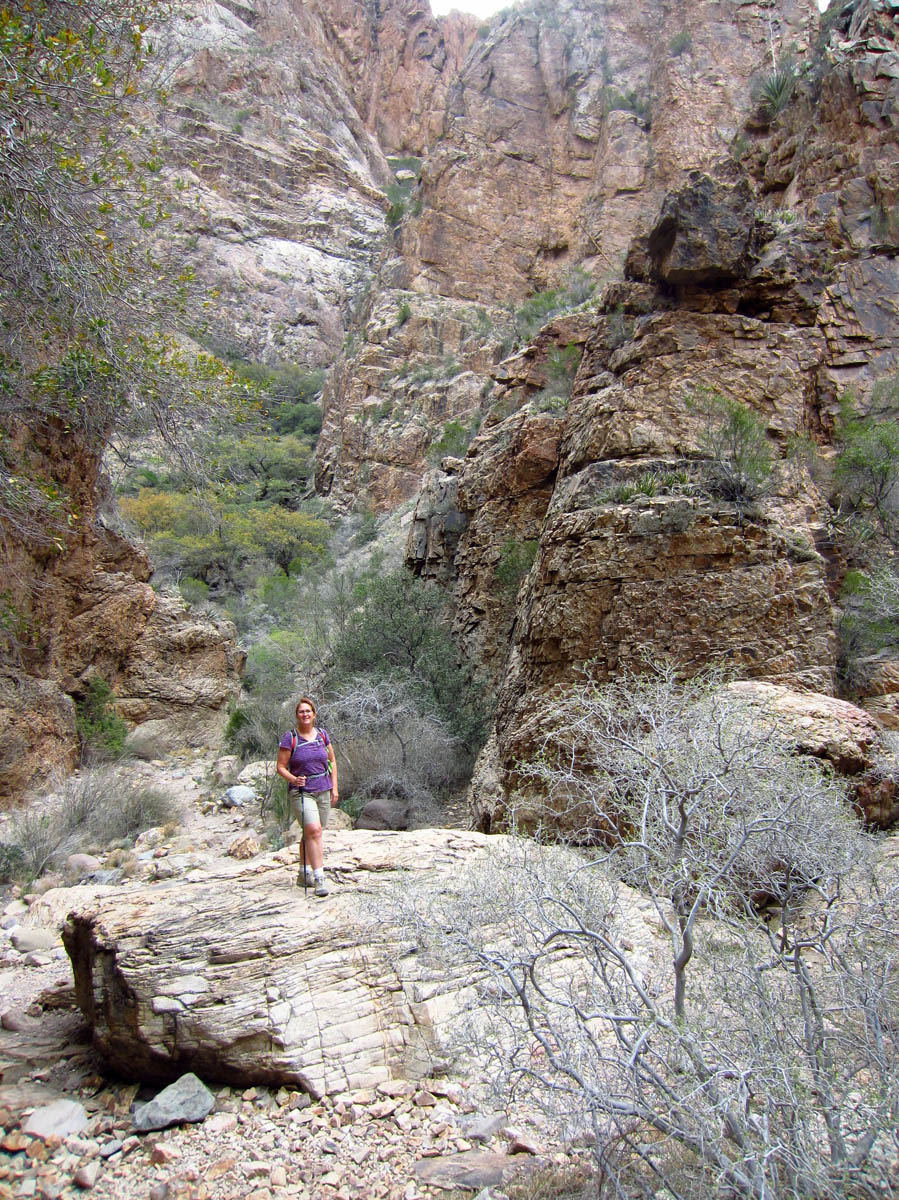 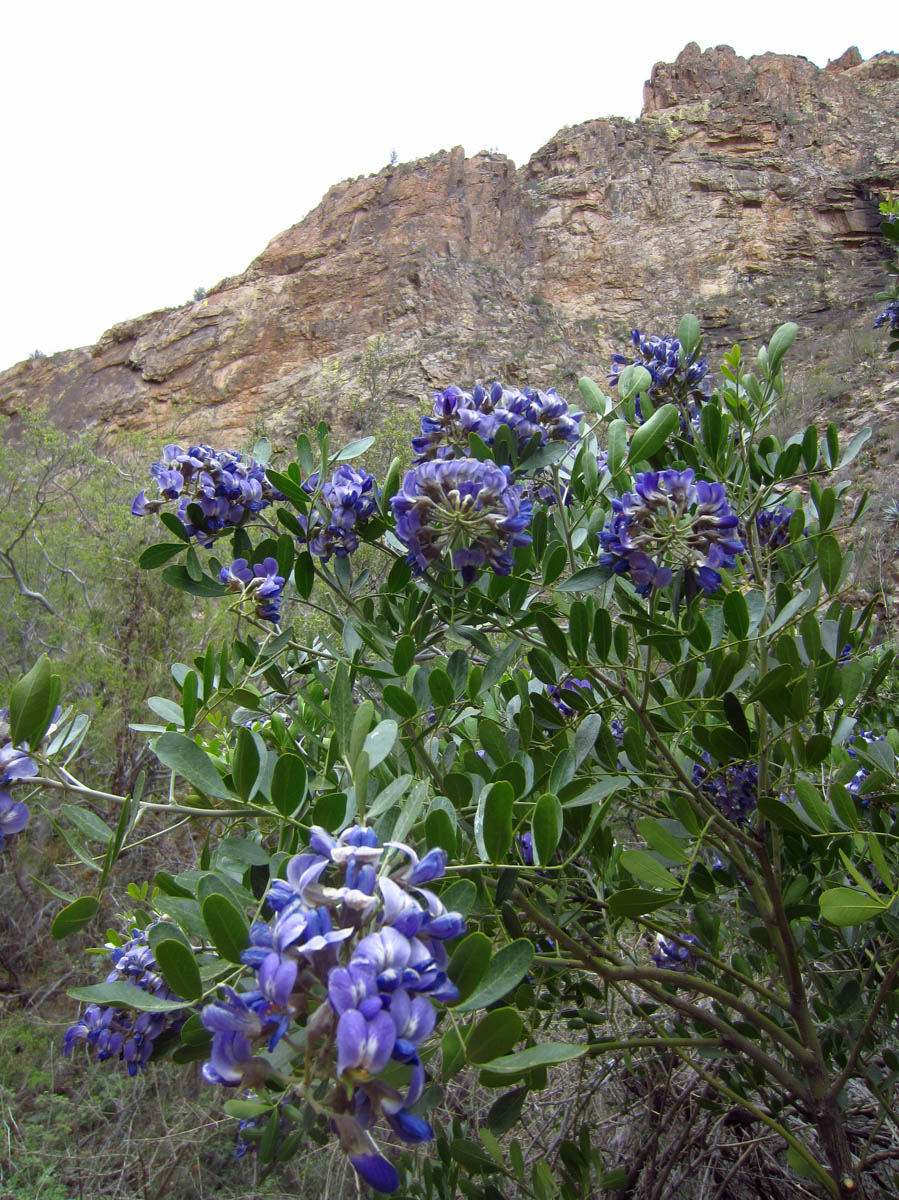 Oak Creek Canyon was full of these flowering trees. They look like a cross between a wisteria and a bluebonnet, Wish I knew what they were. 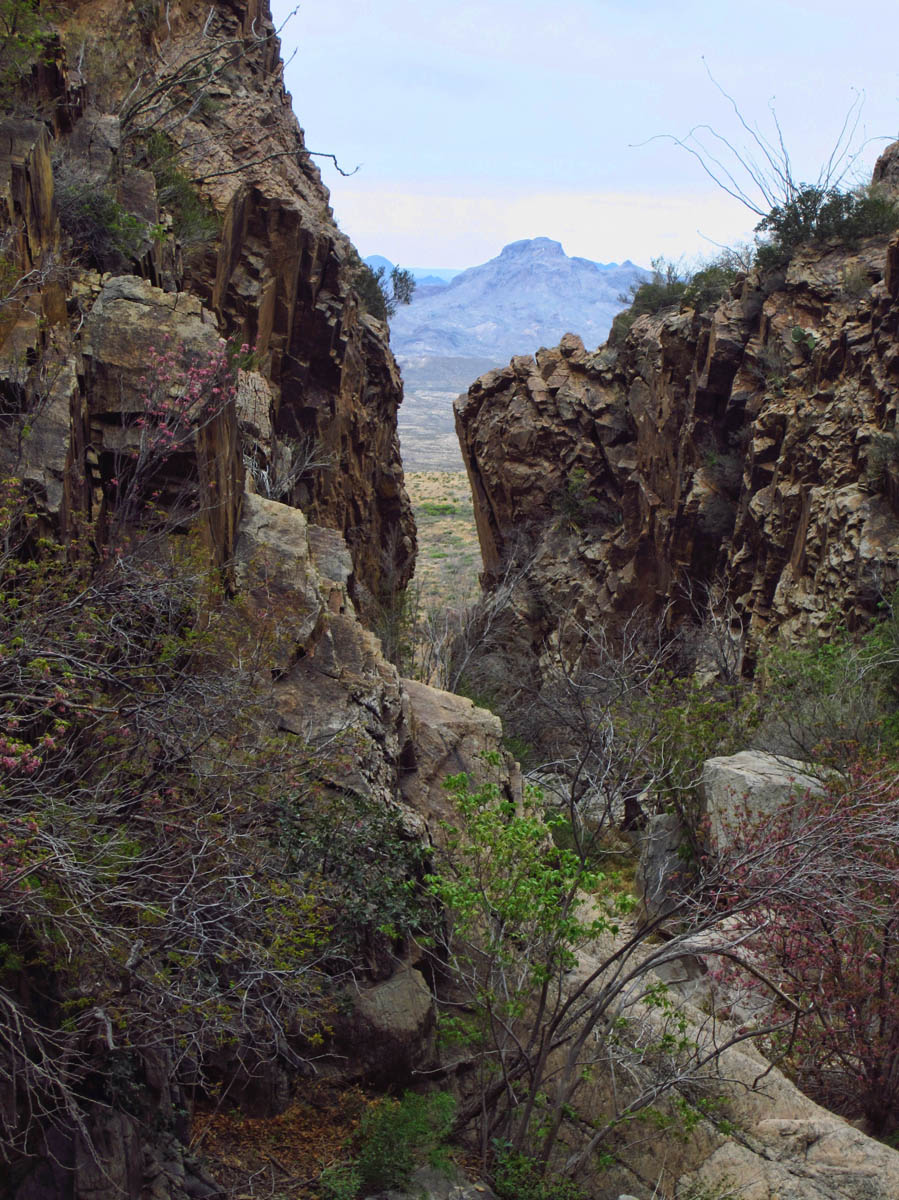 First glimpse of the “window,” or crack in the basin wall 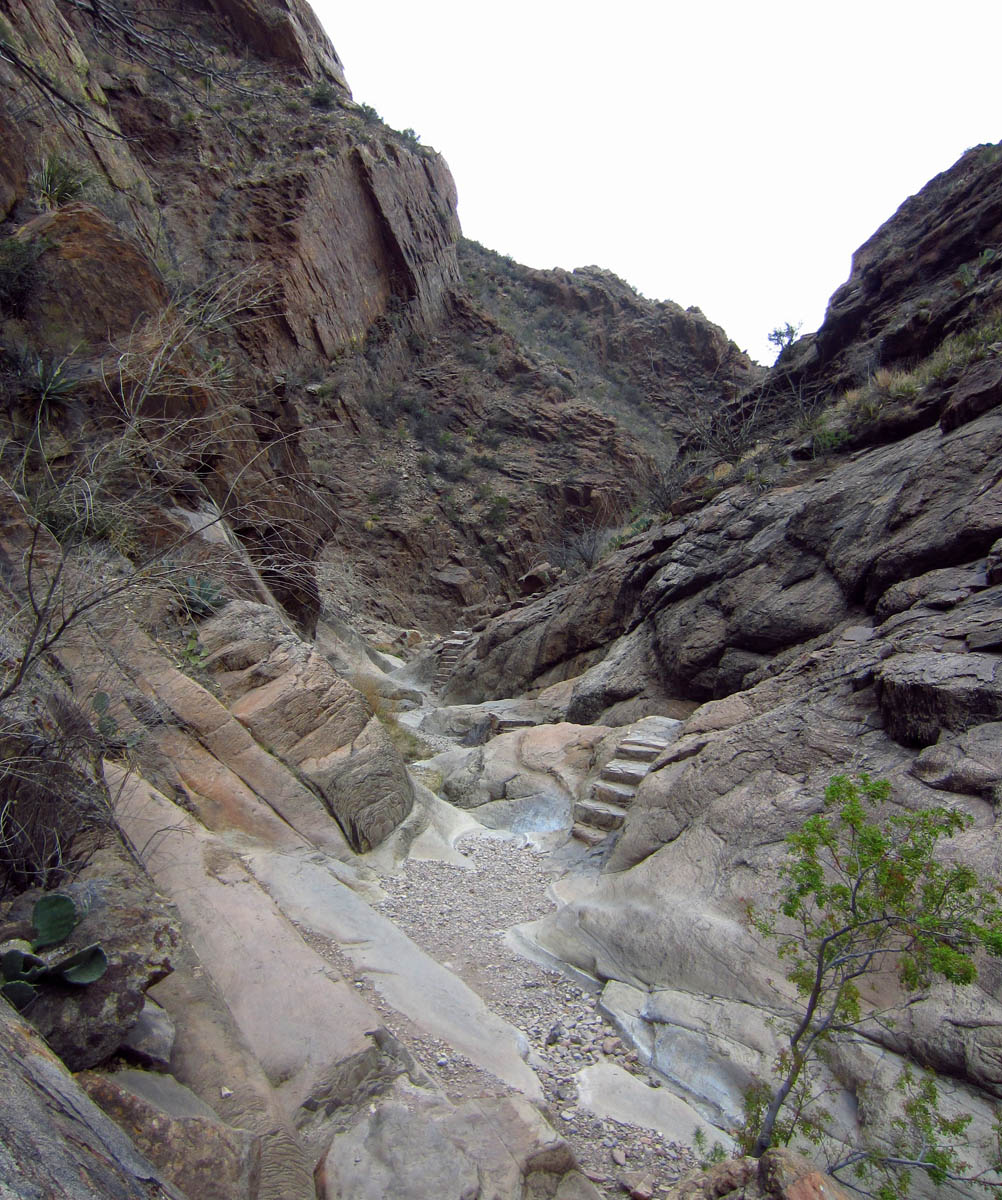 Cascading pools along the pour-off are now dry 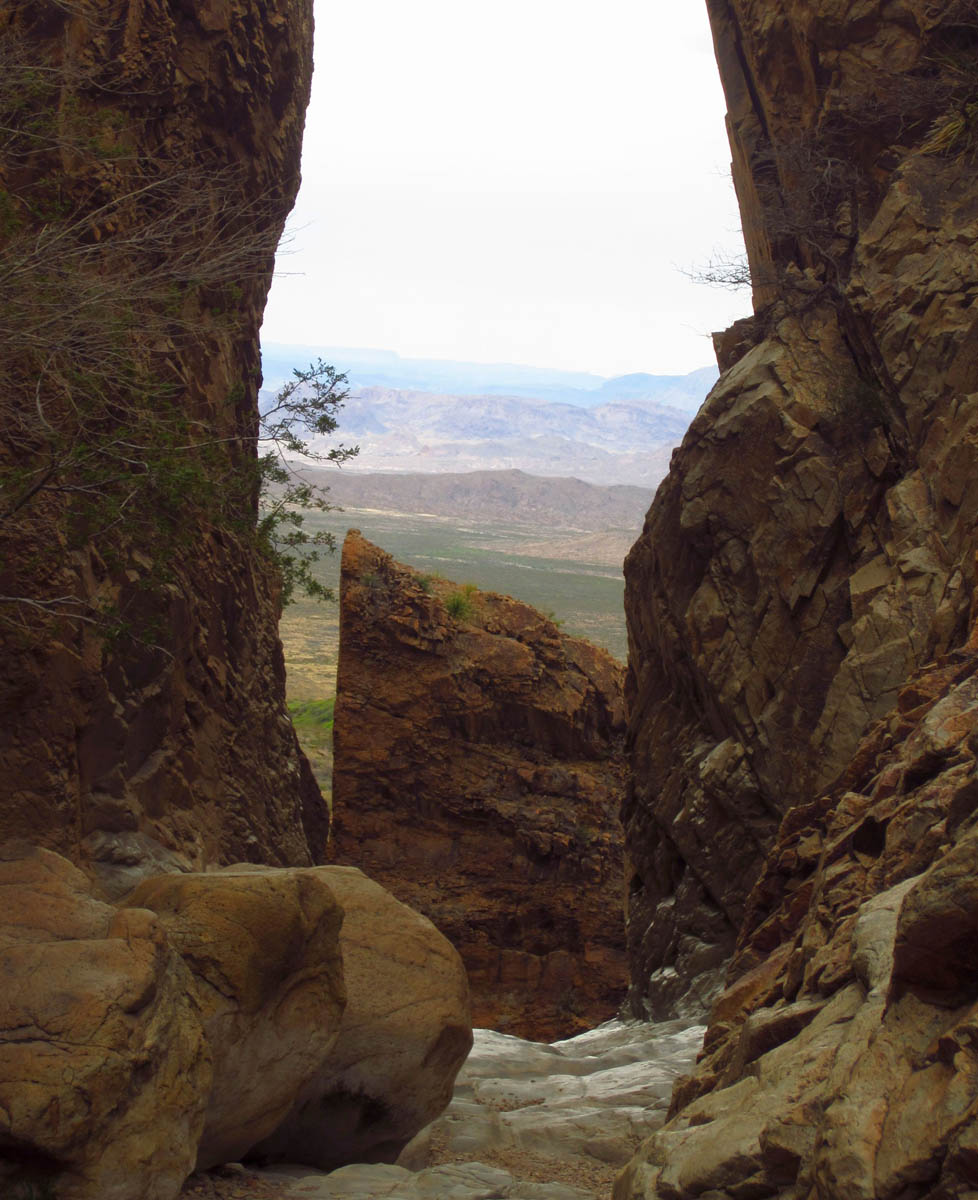 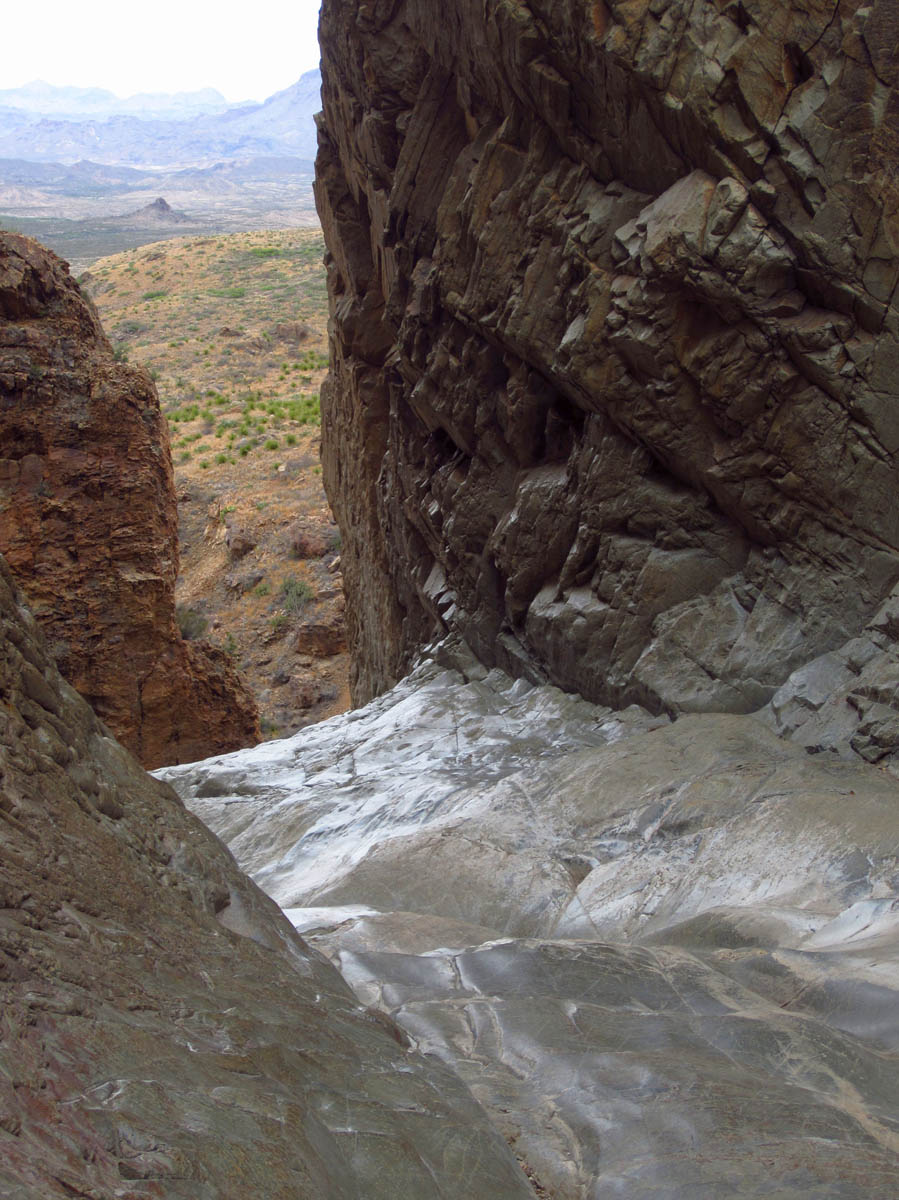 Upon approach, the rock appears to be wet. But no, it is just polished smooth as glass. 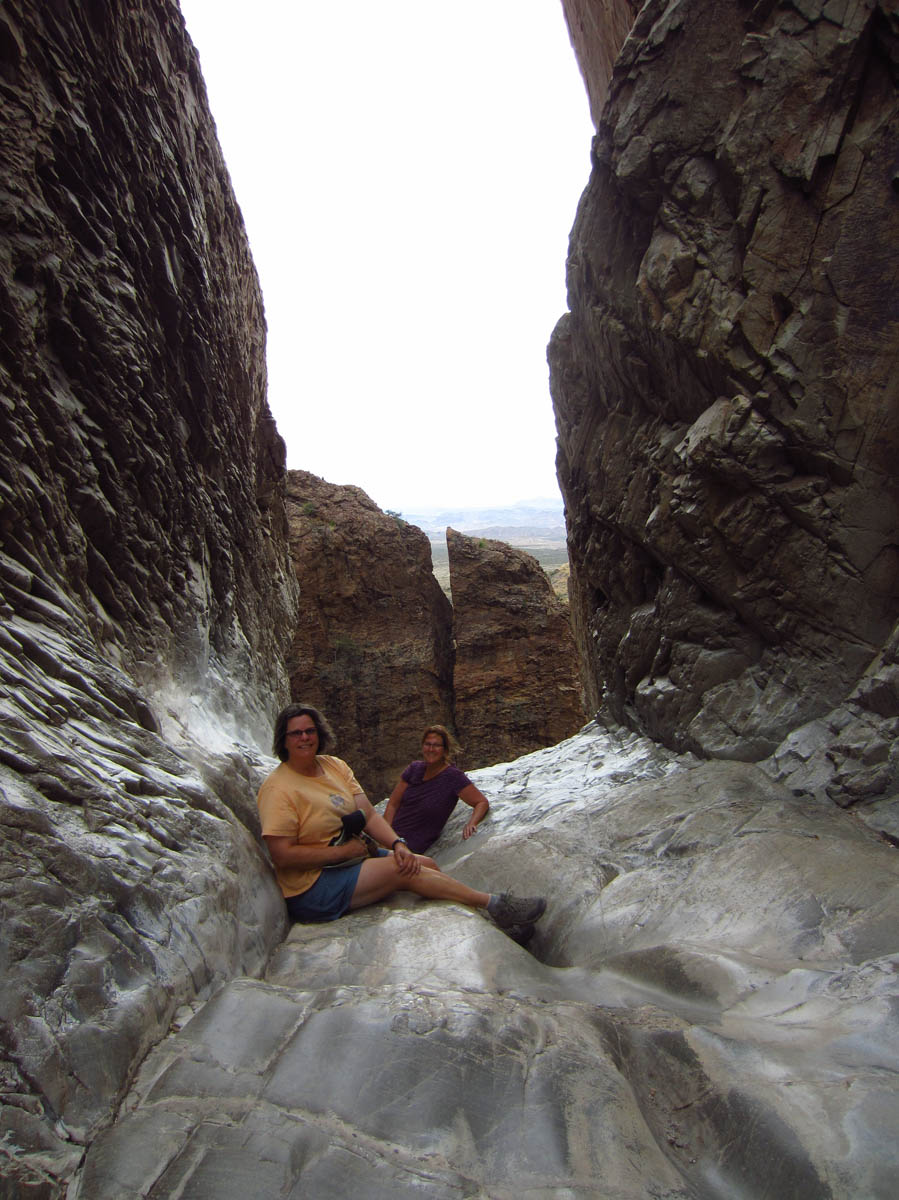 I look at this picture now, and it makes my knees wobbly. What was I thinking?? 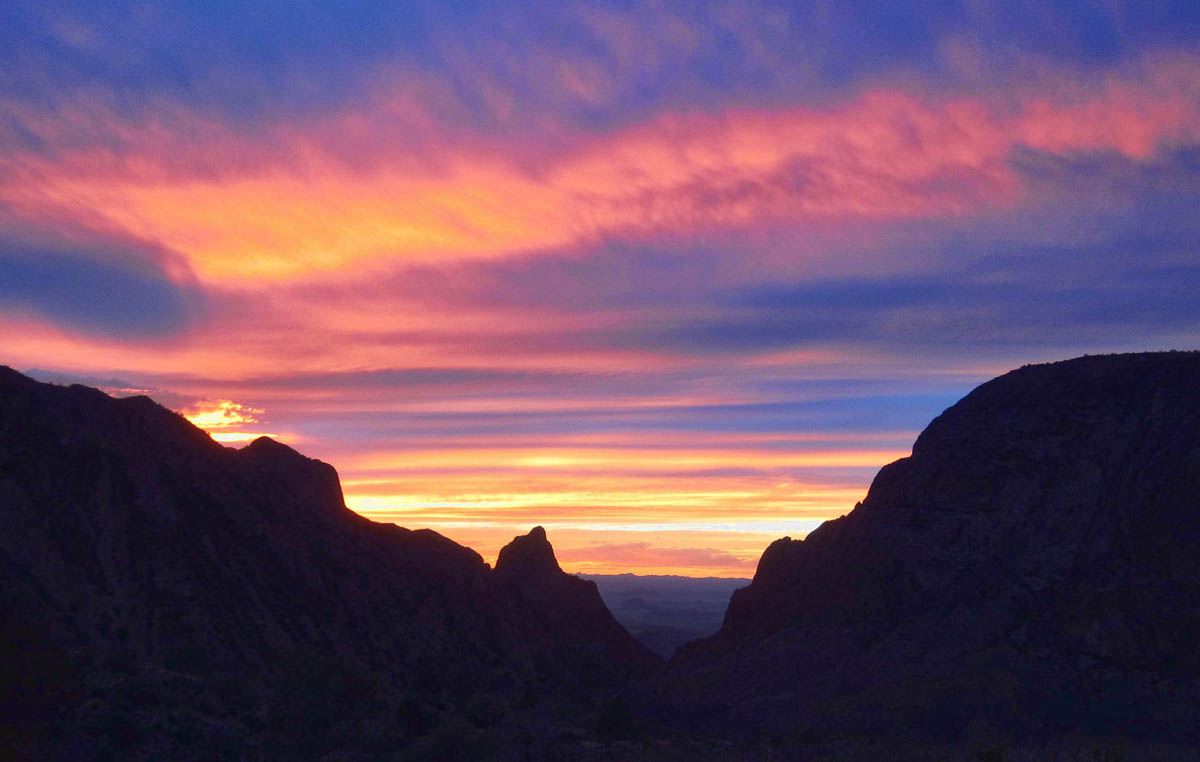 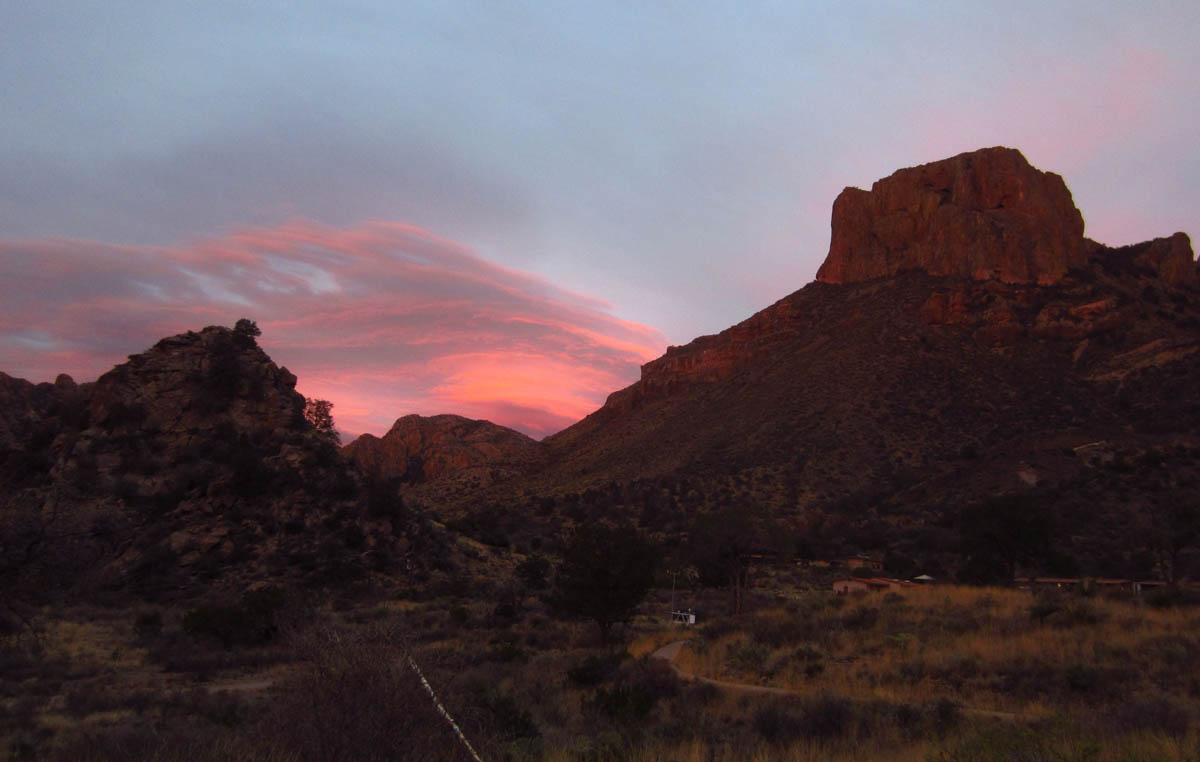 The 180 view of the sunset behind me is equally inspiring.

2.  HOT SPRINGS – I had heard mention that there was once a natural hot spring along the Rio Grande River, so I was pleased to hear the Ranger say that the water was still flowing.   Just a short drive from the Rio Grande Village is the trail head that leads to the springs.  There are several abandoned buildings in the area that was once a resort.

We hiked down the limestone path until we came to a clearing in the reeds along the river.  It would not have been so easy to spot had we not heard voices.  There alongside the river in the gutted out foundation of the former bath house is a makeshift hot tub and “infinity pool.”   The 105 degree flow was strong as it plunged over the ledge into the Rio Grande.   The pool is just deep enough to reach ones shoulders while sitting down.

The weather was chilly during our first visit, making the springs delightfully relaxing…so much so that we vowed to return again later in the week.   The Big Bend area is known for its night skies with no light pollution anywhere nearby, so we knew the hot tub would offer a memorable experience under the stars.  The question was, would we have the nerve to make the short, easy hike in total darkness?

The drive to the springs is a little tenuous at places, as the road splits into two narrow one way lanes along both sides of a small canyon.   It was so dark along this road it seemed as if the darkness was swallowing up my headlights.  When we stepped out of the car in the parking lot, the sky was ink-black, and filled with thousands of brilliant stars!   Having just come from the McDonald Observatory, it was even more exciting to be able to now identify some of them.

We started down the pitch-black path, me with my dim AA headlamp, and Lynne, aka “Gadget Girl” with her 200,000 lumen spotlight.    It was a mixed reaction to find a couple of people already occupying the hot tub, as my typical quest for solitude was overridden by the relief that “there is safety in numbers.”  Besides, these other visitors could warrant a whole other blog post.  😉

We stayed in the hot tub, soaking in the healing, therapeutic warmth for two hours, watching the near-full moon rise over the Rio Grande, directly across from us.   I wish I had the words, or even the photos to articulate the magic of this experience, soaking in the warm water while watching the moon crest over the bank of the river.   It is one that I have returned to in my mind many times at the end of a long hiking day. 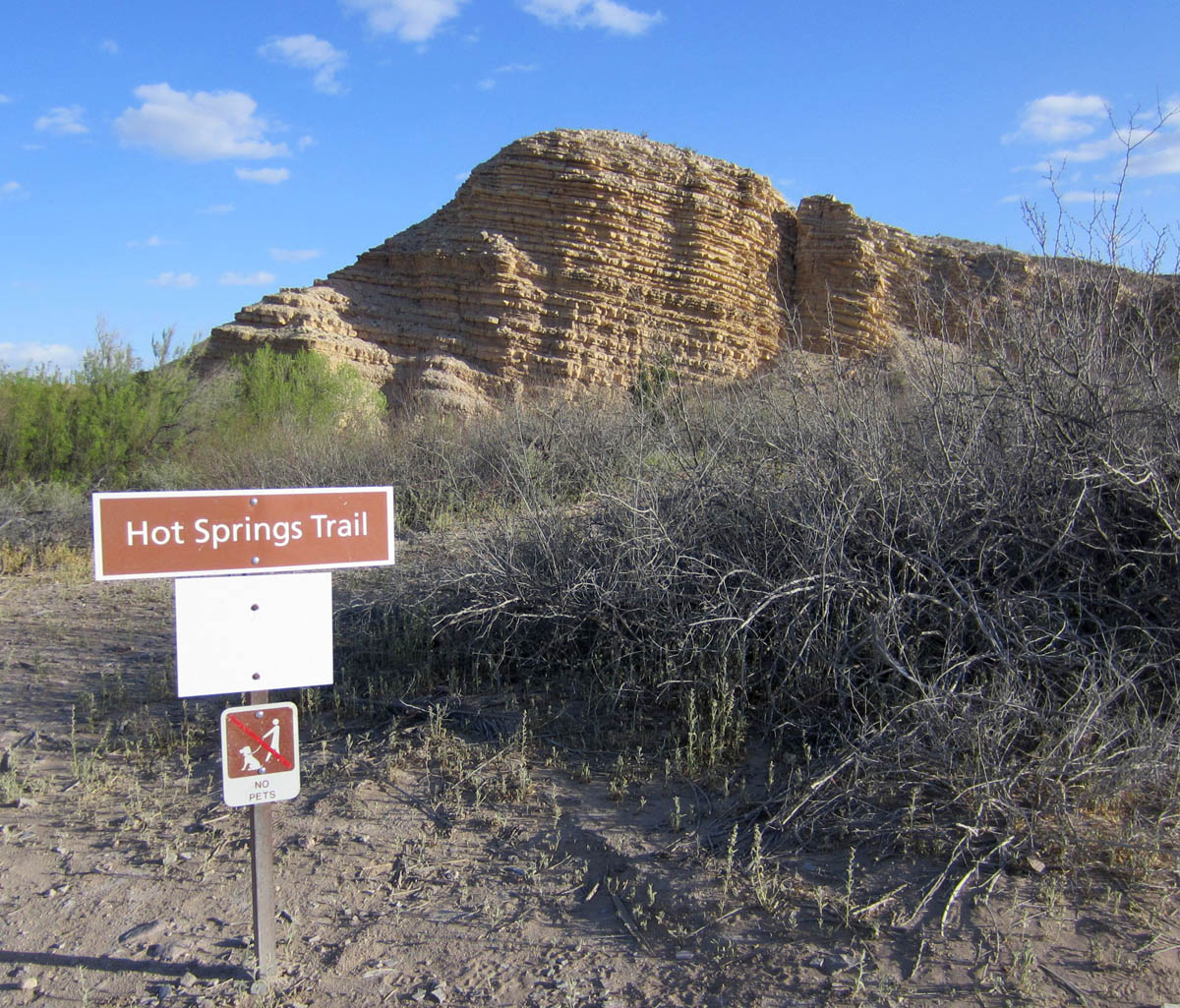 Great rock formations in this area 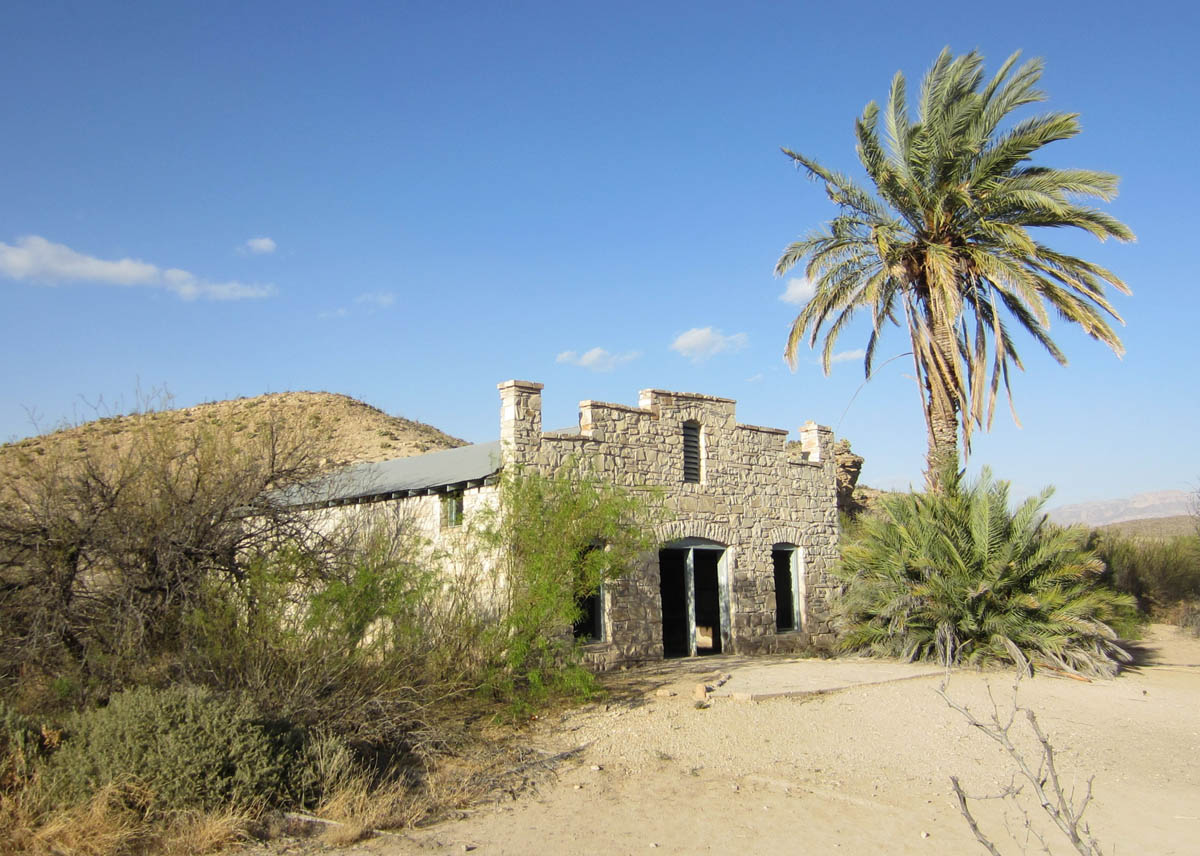 Old abandoned store from the 1930’s when the hot springs was a bathing resort. 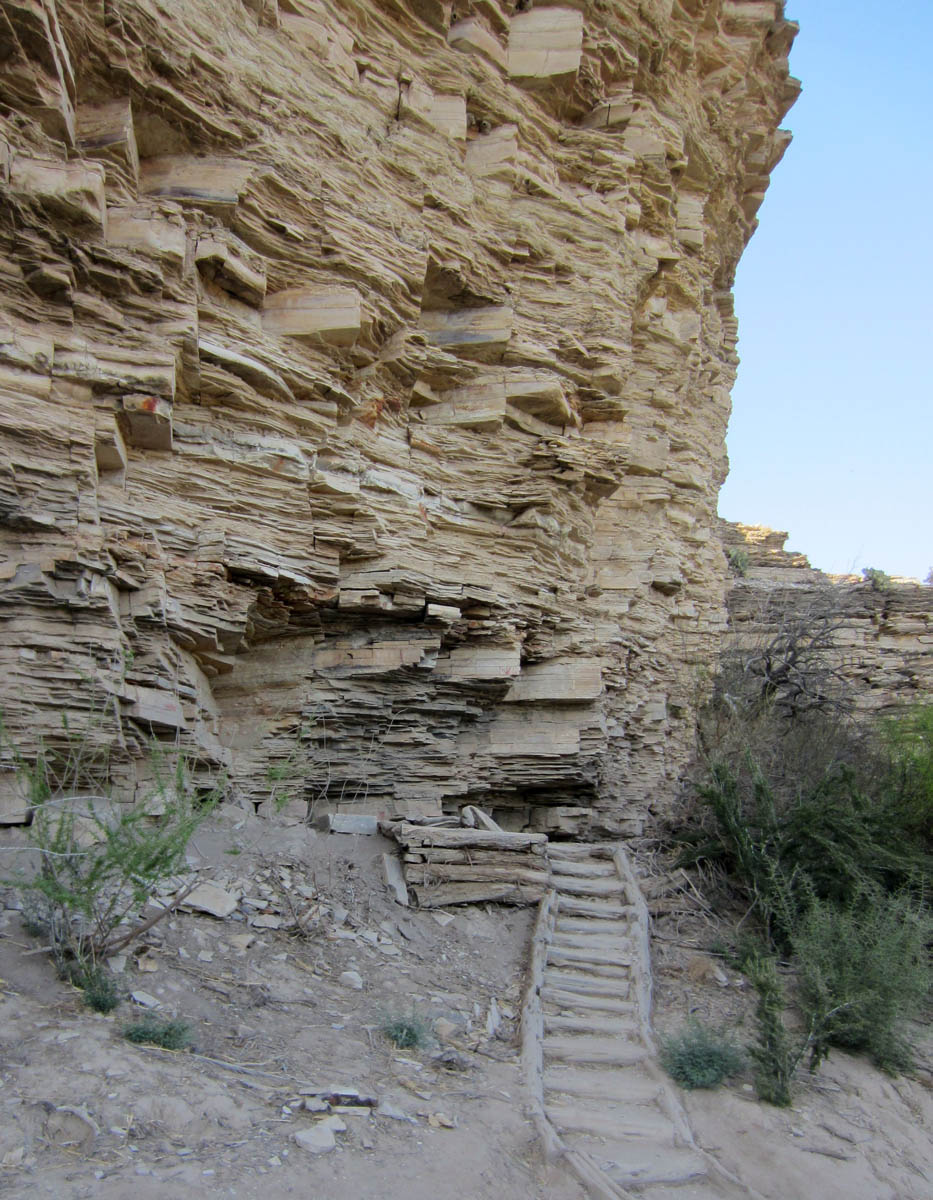 The limestone path to the springs is very scenic. 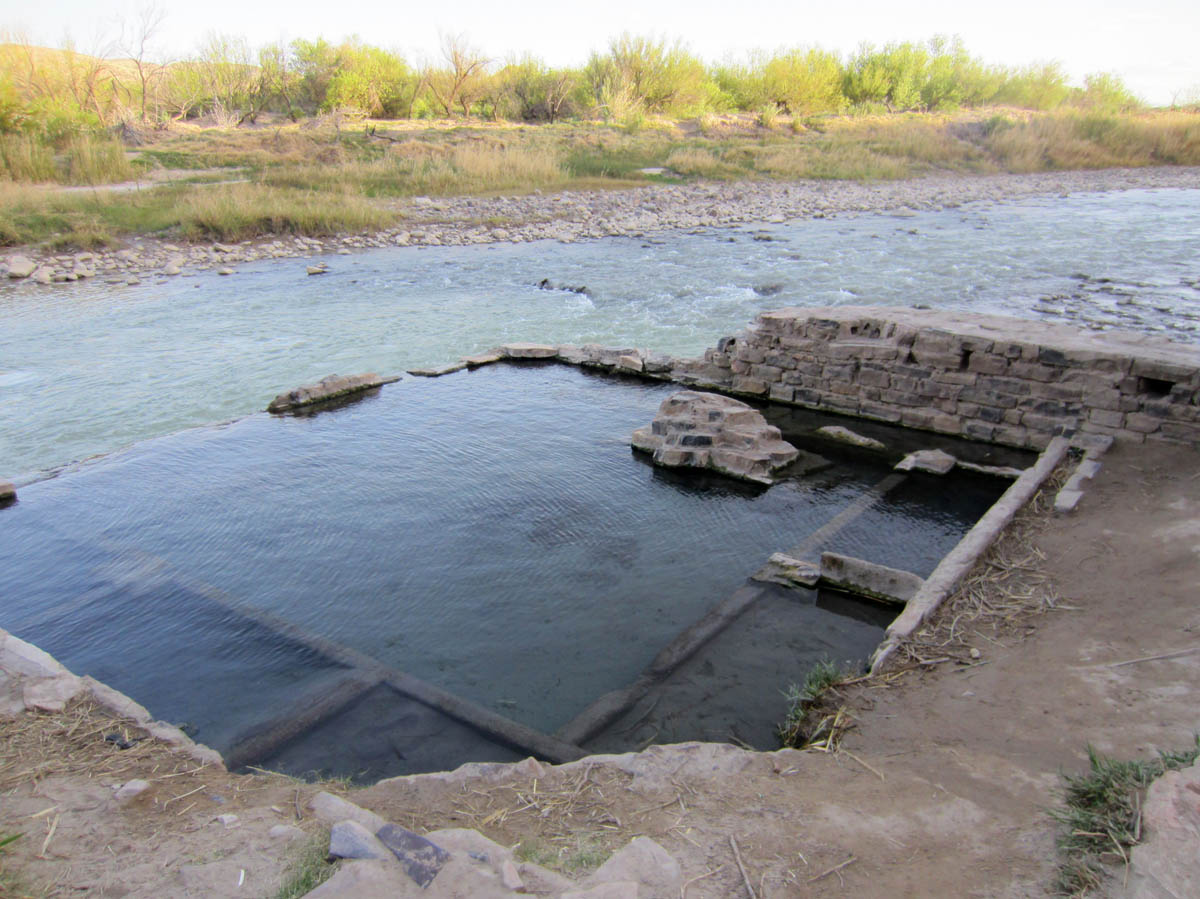 Hot tub is actually the foundation of the old bathhouse. 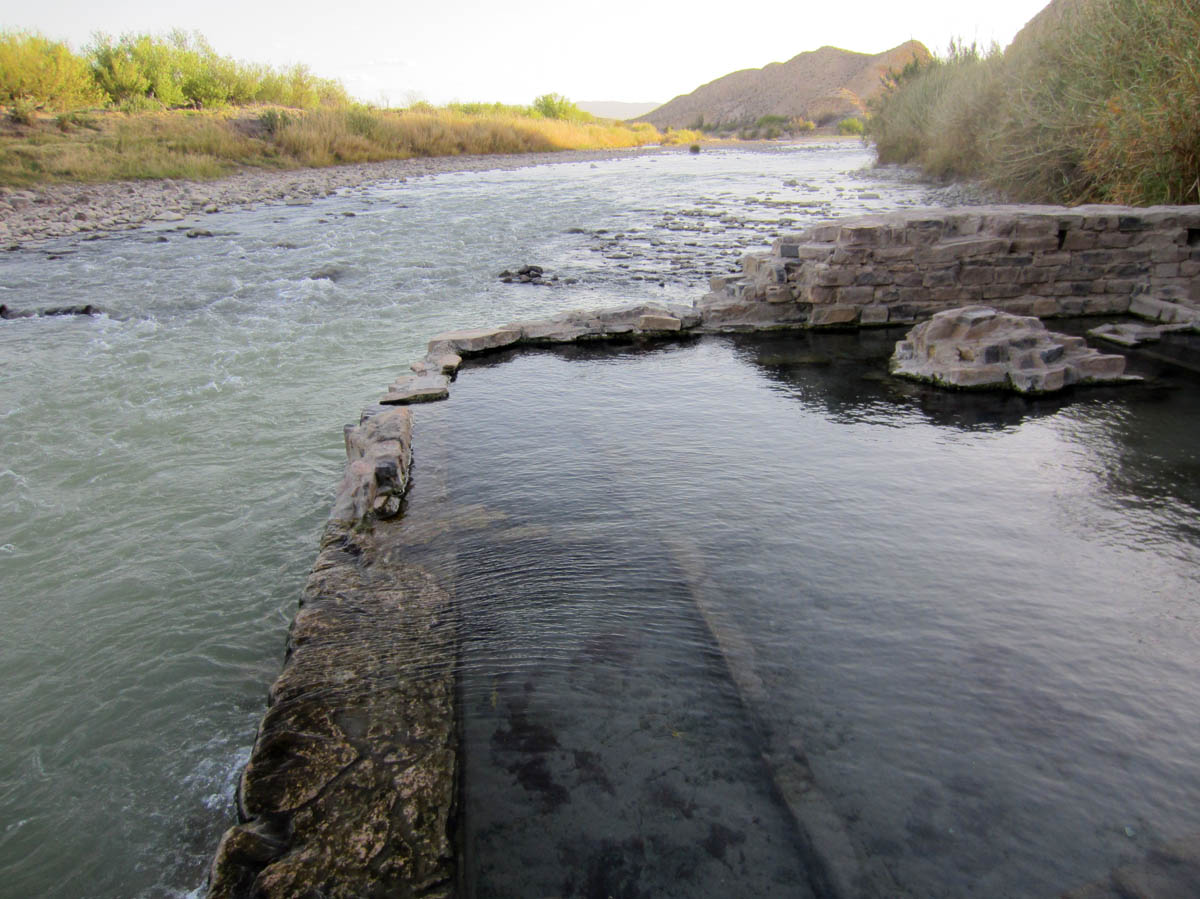 Hot springs water flows over the edge of the foundation like an infinity pool. 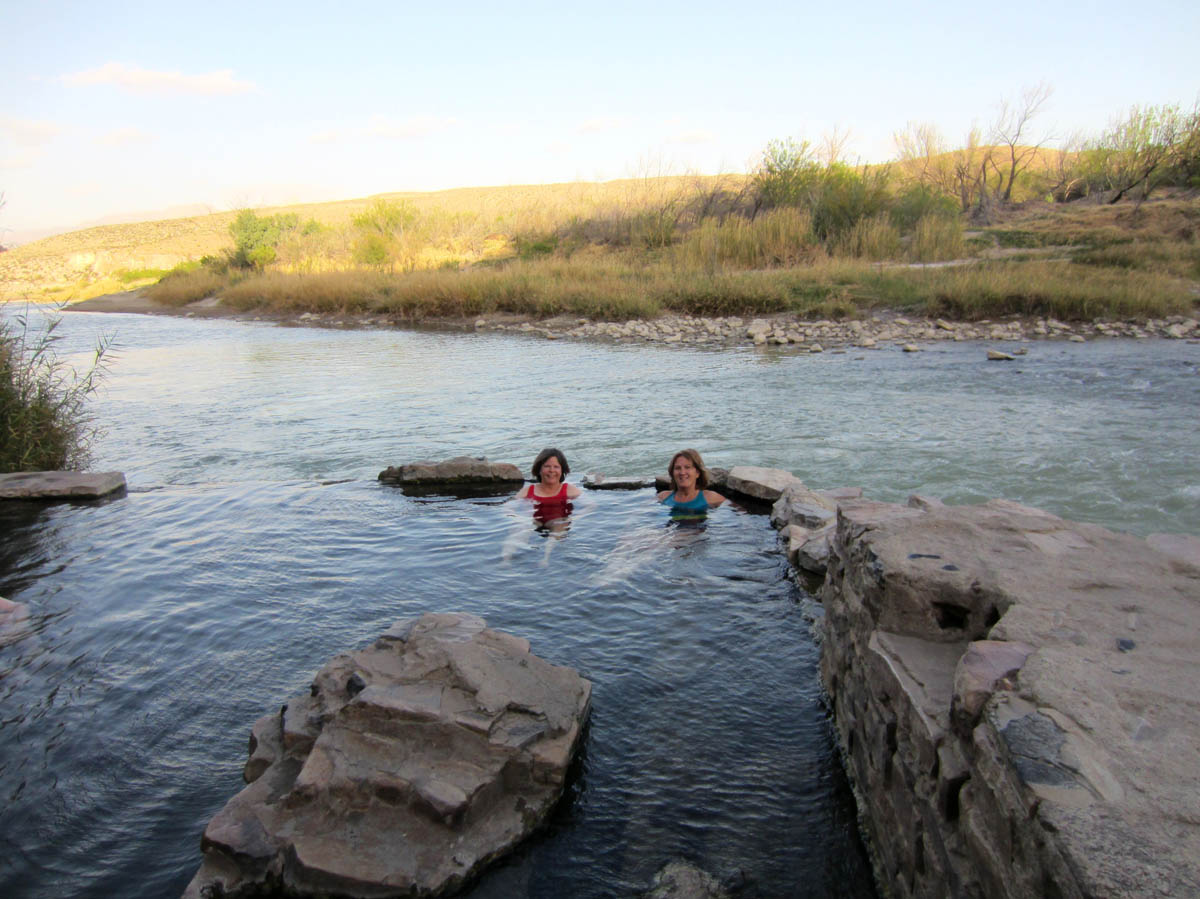 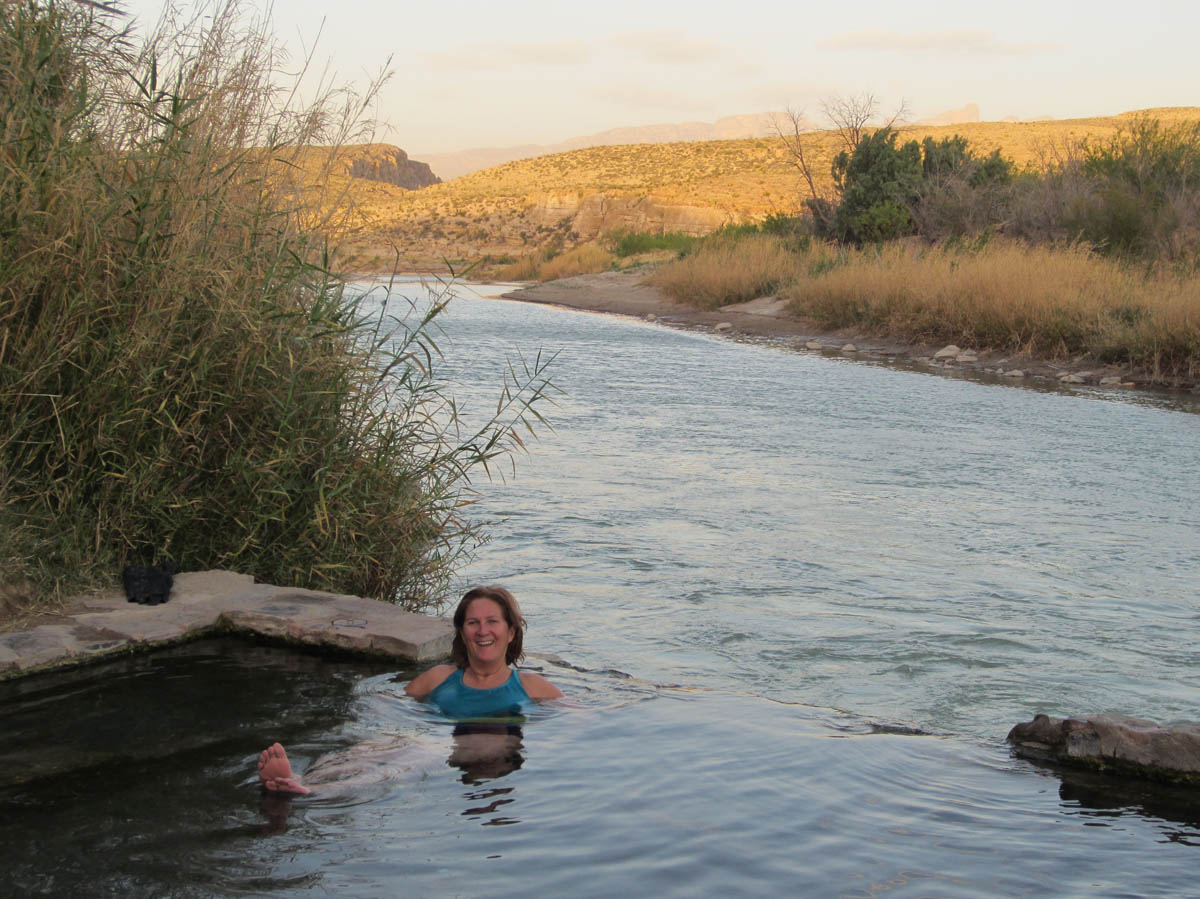 A memory I hope to keep for a long while…