Never in my brief nomadic life have I experienced wind like I did at Hueco Tanks State Park. Relentless, constant, wearing, psychologically taxing wind, all day and throughout the night. I was in a gorgeous campsite, but there was no sense in trying to sit outside the rig. The first day, I took my Caesar salad out to dine “al fresco,” but my romaine lettuce was taking flight faster than I could eat it. It went down hill from there.

Here is a little sample of my week from weather.com:

* WINDS: WEST-SOUTHWEST WINDS OF 30 TO 40 MPH WITH GUSTS TO 55 MPH. HIGHEST EAST OF AREA MOUNTAIN RANGES. WINDS WILL CONTINUE TO INCREASE THIS AFTERNOON. OBSERVATIONS INDICATE THAT BLOWING DUST IS BEGINNING TO DEVELOP OVER PARTS OF SOUTHERN NEW MEXICO… AND THIS WILL LIKELY SPREAD INTO WEST TEXAS LATER TODAY. WINDS WILL REMAIN STRONG EAST OF AREA MOUNTAIN RANGES. OVERNIGHT WINDS IN THESE FAVORED AREAS MAY PEAK AGAIN WELL AFTER MIDNIGHT… WITH GUSTS TO 50 MPH LASTING INTO THURSDAY MORNING. WINDS THIS STRONG CAN MAKE DRIVING DIFFICULT… ESPECIALLY FOR HIGH PROFILE VEHICLES.

I am determined to forge on, in spite of the psychological warfare of high winds and constant sounds of gunfire coming from nearby Fort Bliss. I go down to the Park Office every morning at 10:00am to suck up to the woman behind the desk with the horn-rimmed glasses and Little Dutch Boy Haircut.  I force a smile and cheerful greeting in hopes that she will grant me a permit for my daily walkabout. Although she tells me all 70 spaces are taken by reservations, I manage to get a “stand-by” permit each day. Though I can’t figure out where all the people are, as I have only seen three people on the mountain the entire week. 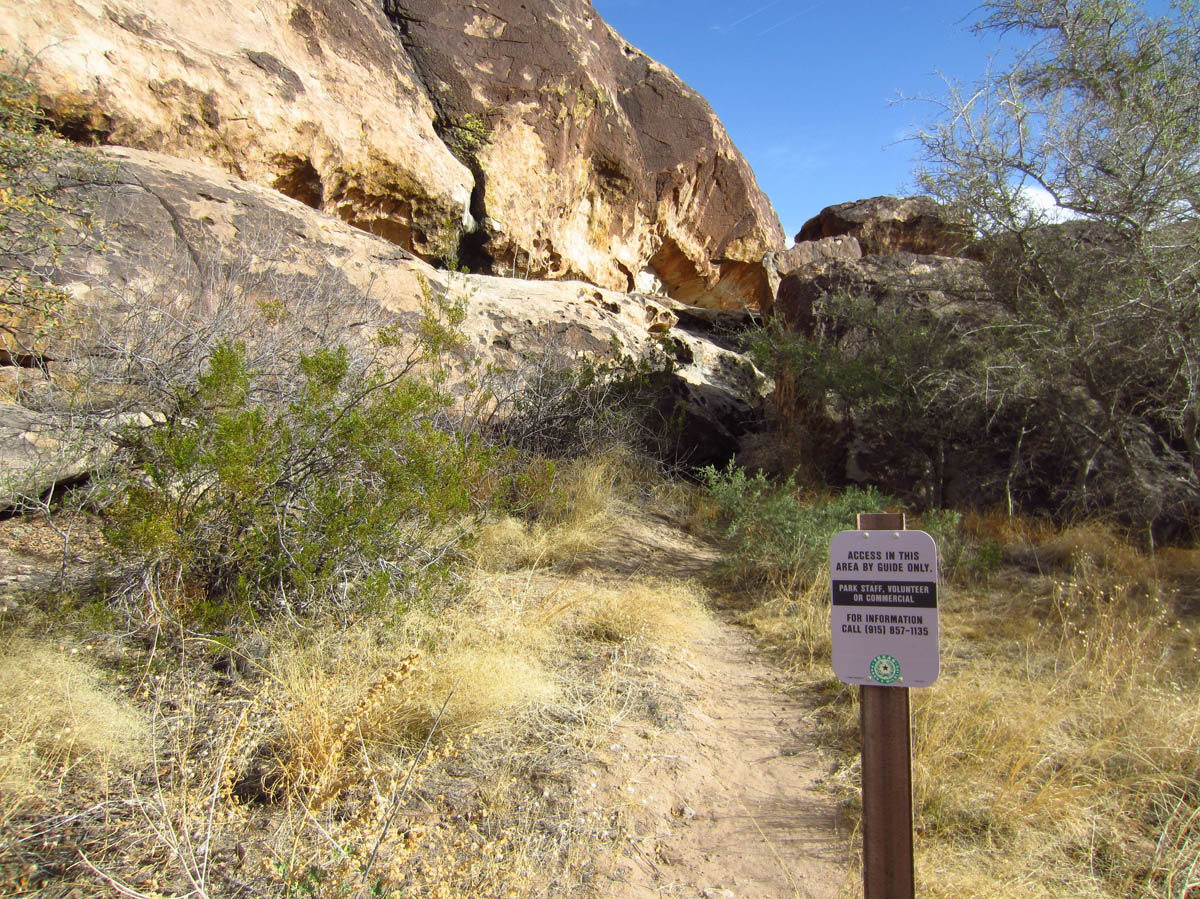 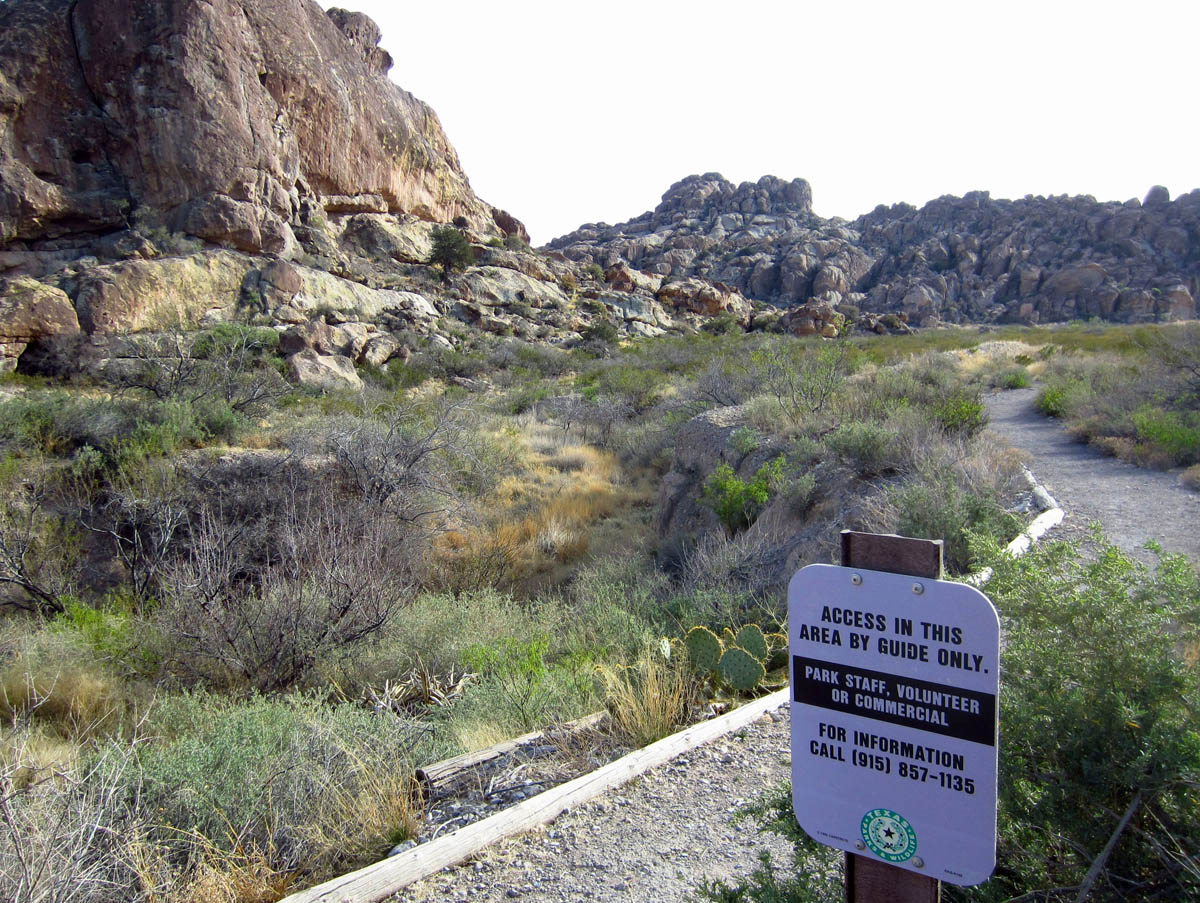 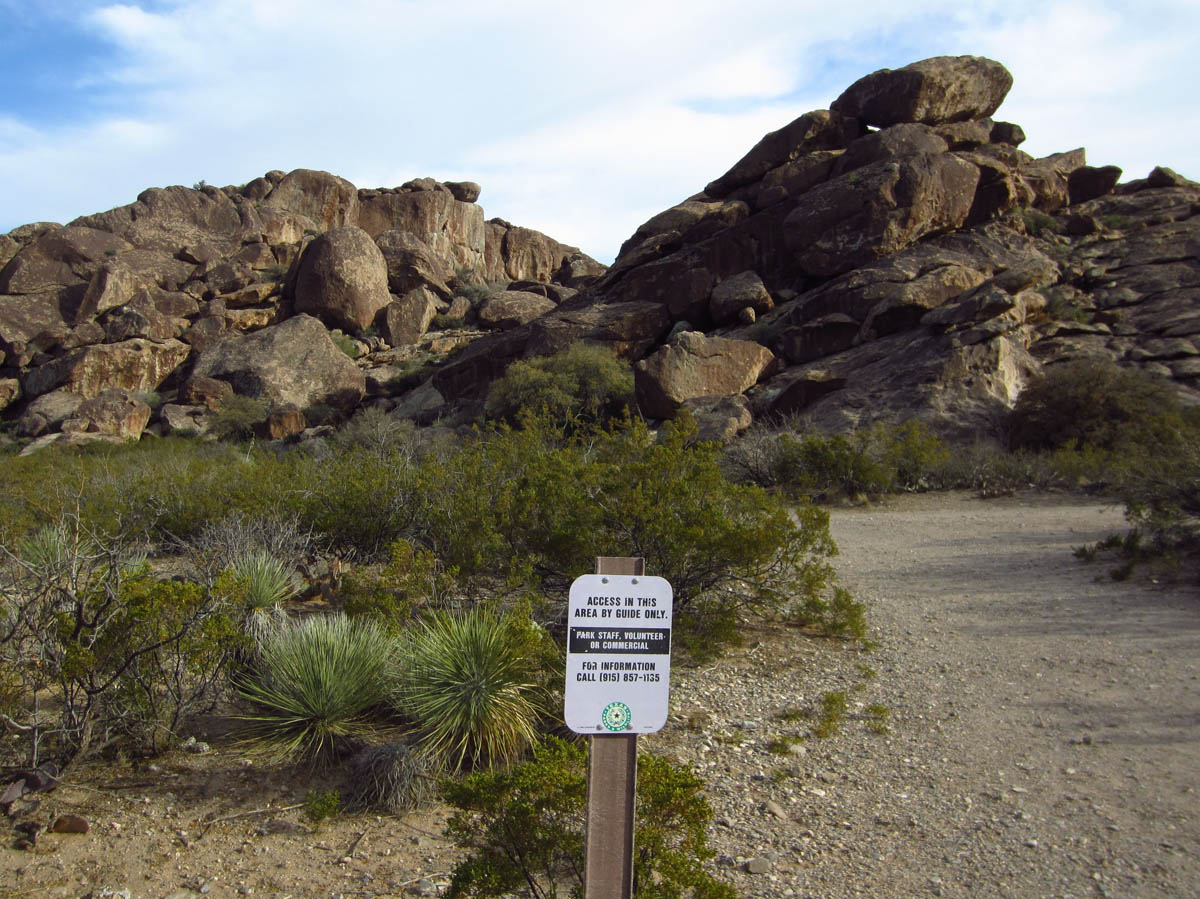 I quickly realize that though a permit will make me “legit,” there aren’t a lot of places I can go with it unless I have a guide. Guided tours are only offered Wednesday through Sunday, so I make a reservation for both a Hiking Tour and a Pictograph Tour. These are only offered at certain times throughout the day, so I will need to take an “extended lunch break” in order to get out and see some “forbidden” areas of the park. 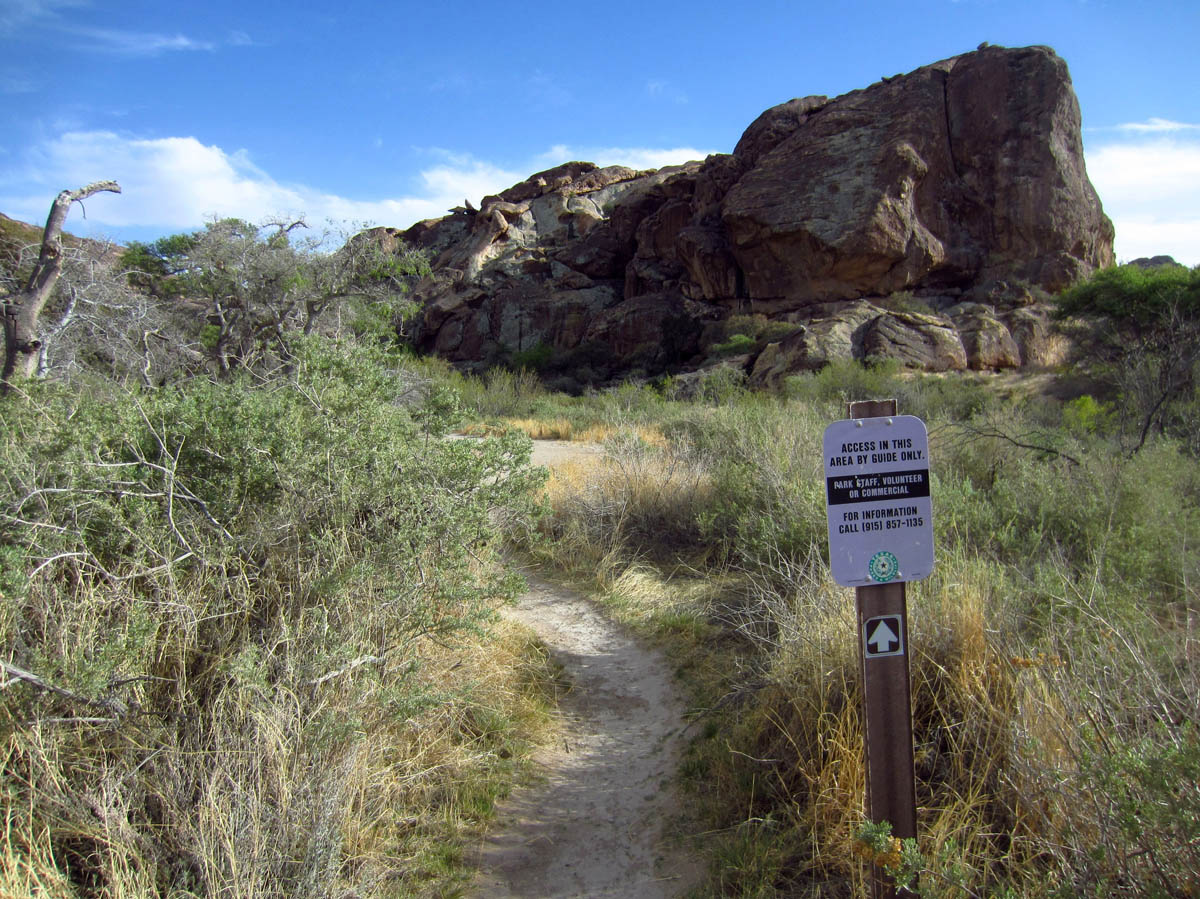 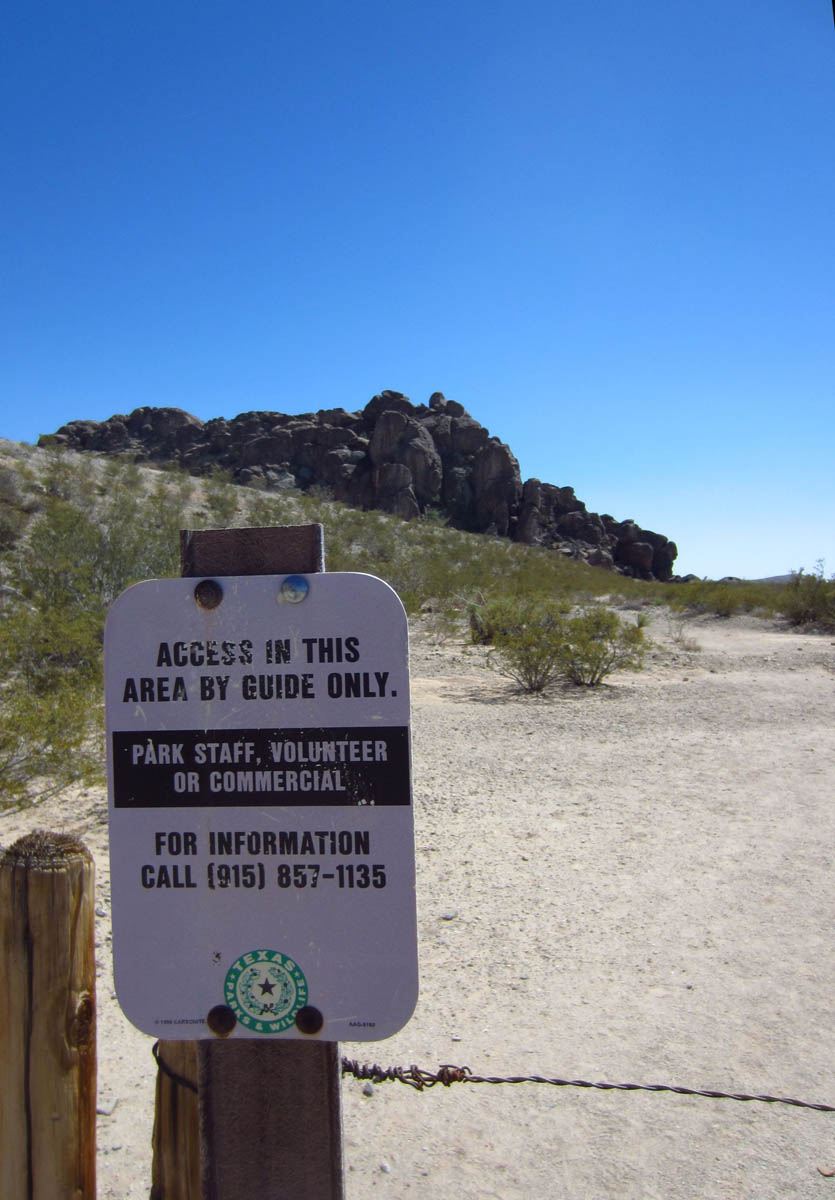 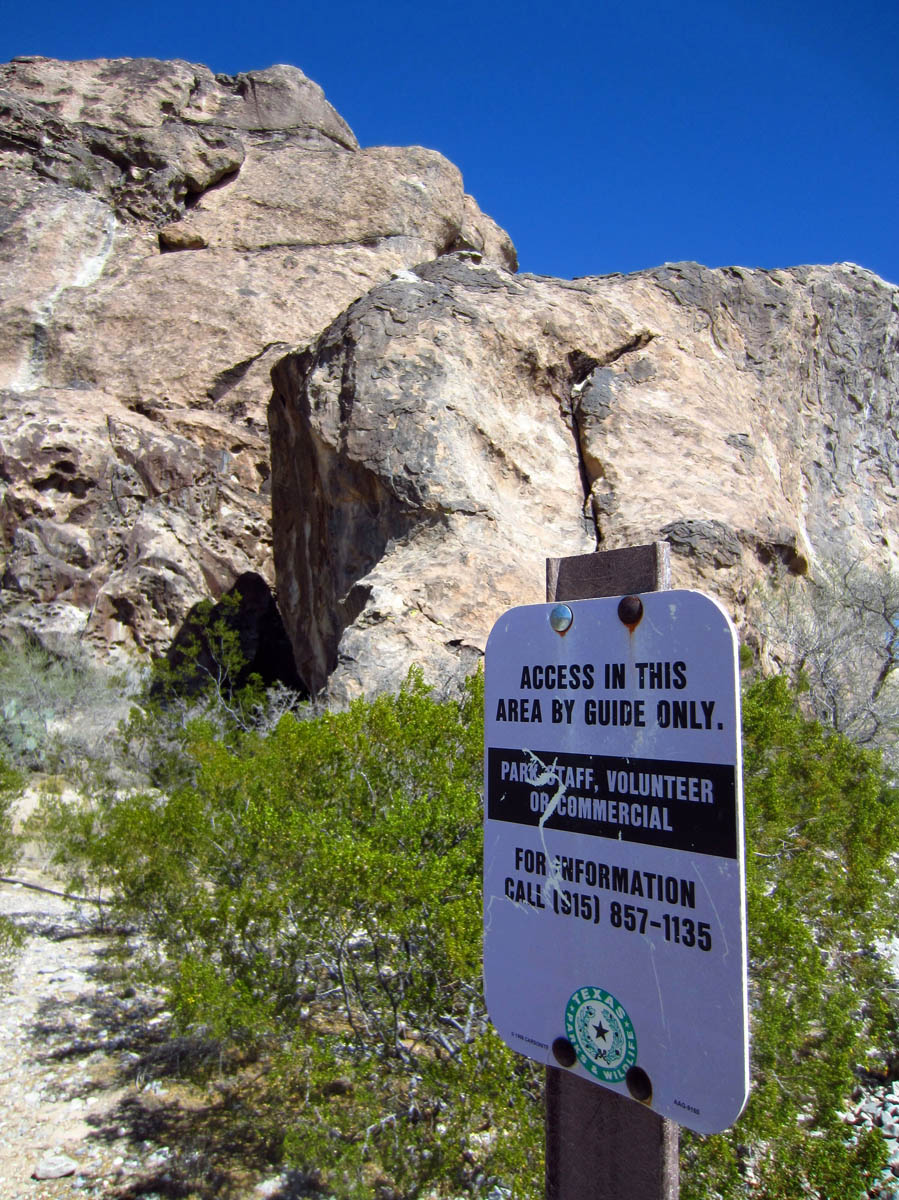 The Hiking Tour is up first. Turns out, it is going to be just me and Jorge. He doesn’t seem to be much of a hiker, though. I wear my trusty pedometer. In 2 hours, we have gone 2,680 steps. 😉 We do more talking and sitting than we do hiking. We circumnavigate the North Mountain — Not too thrilling, but still it is otherwise “forbidden” without Jorge as my guide. 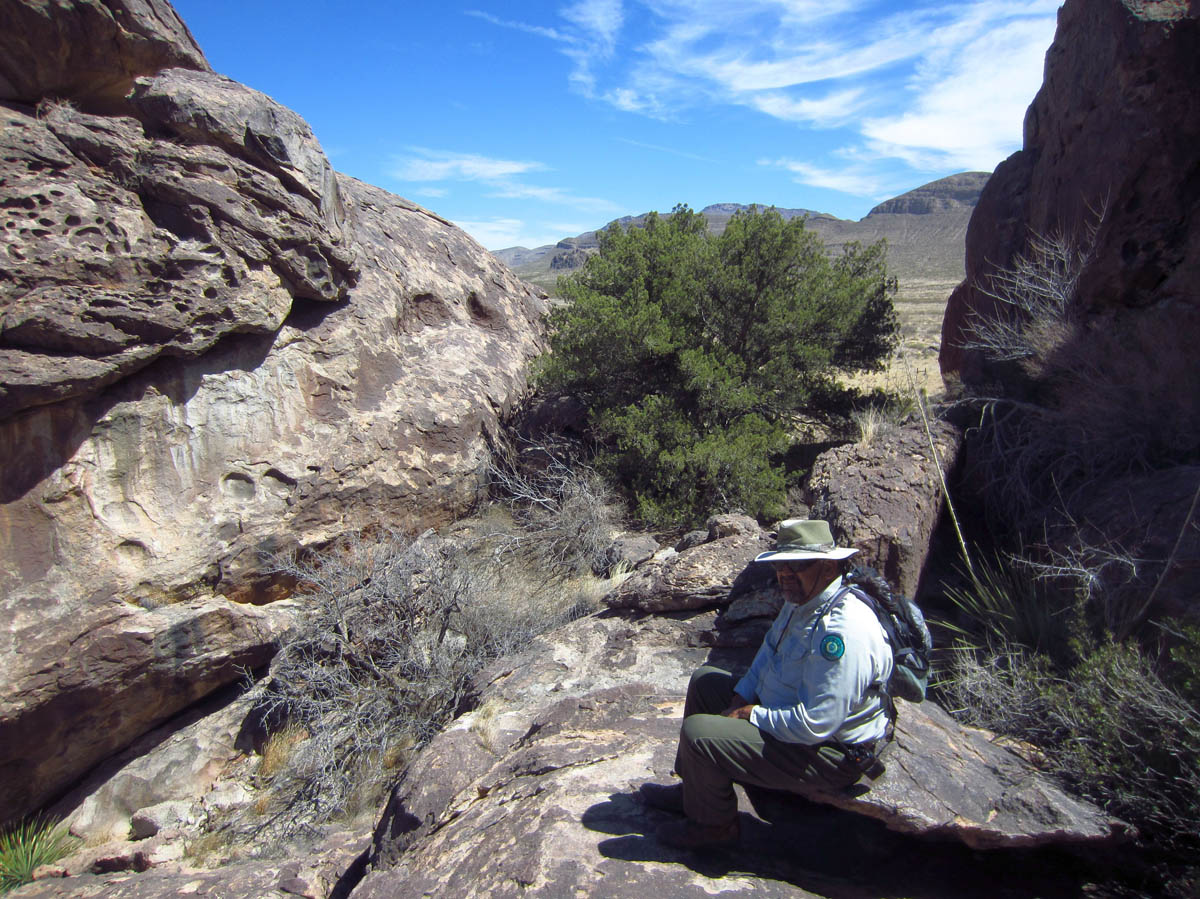 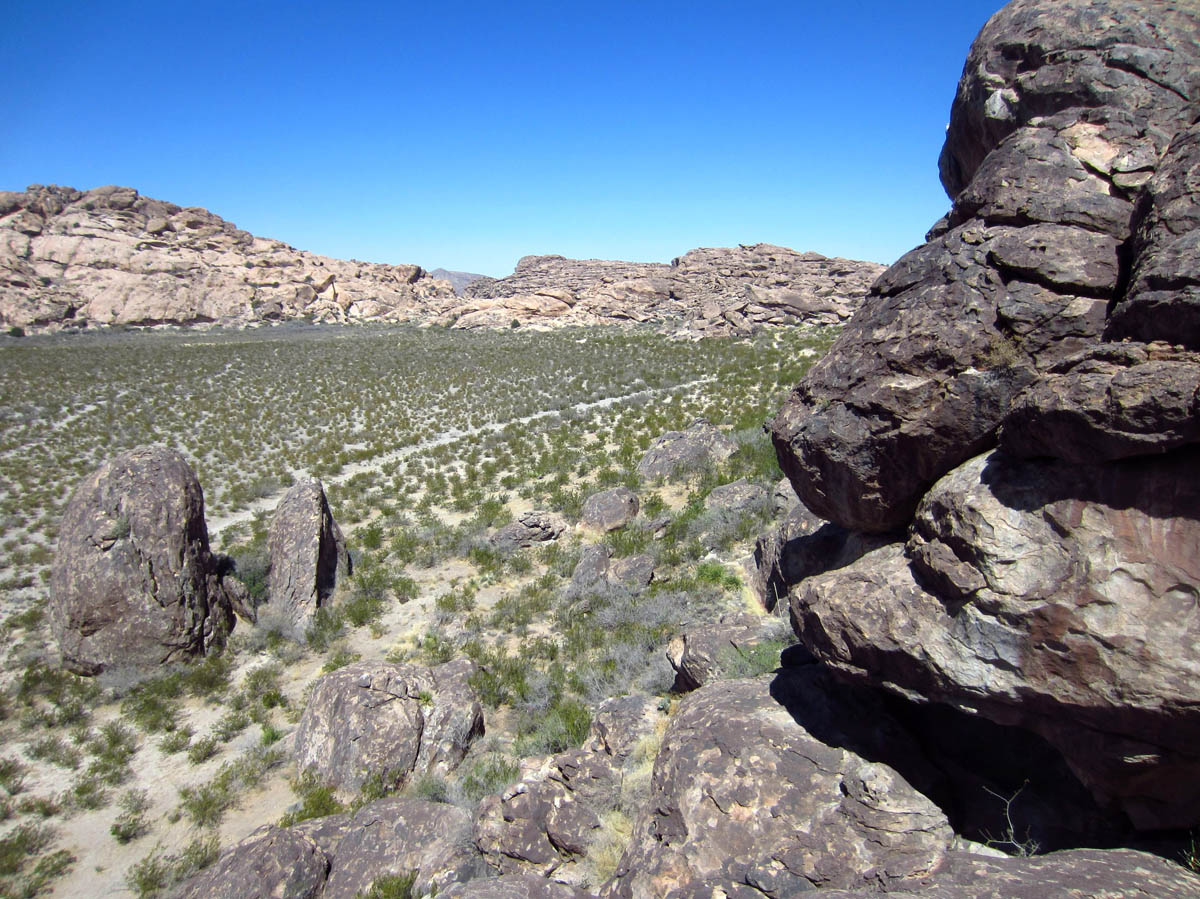 View of the West Mountain from the North Mountain. 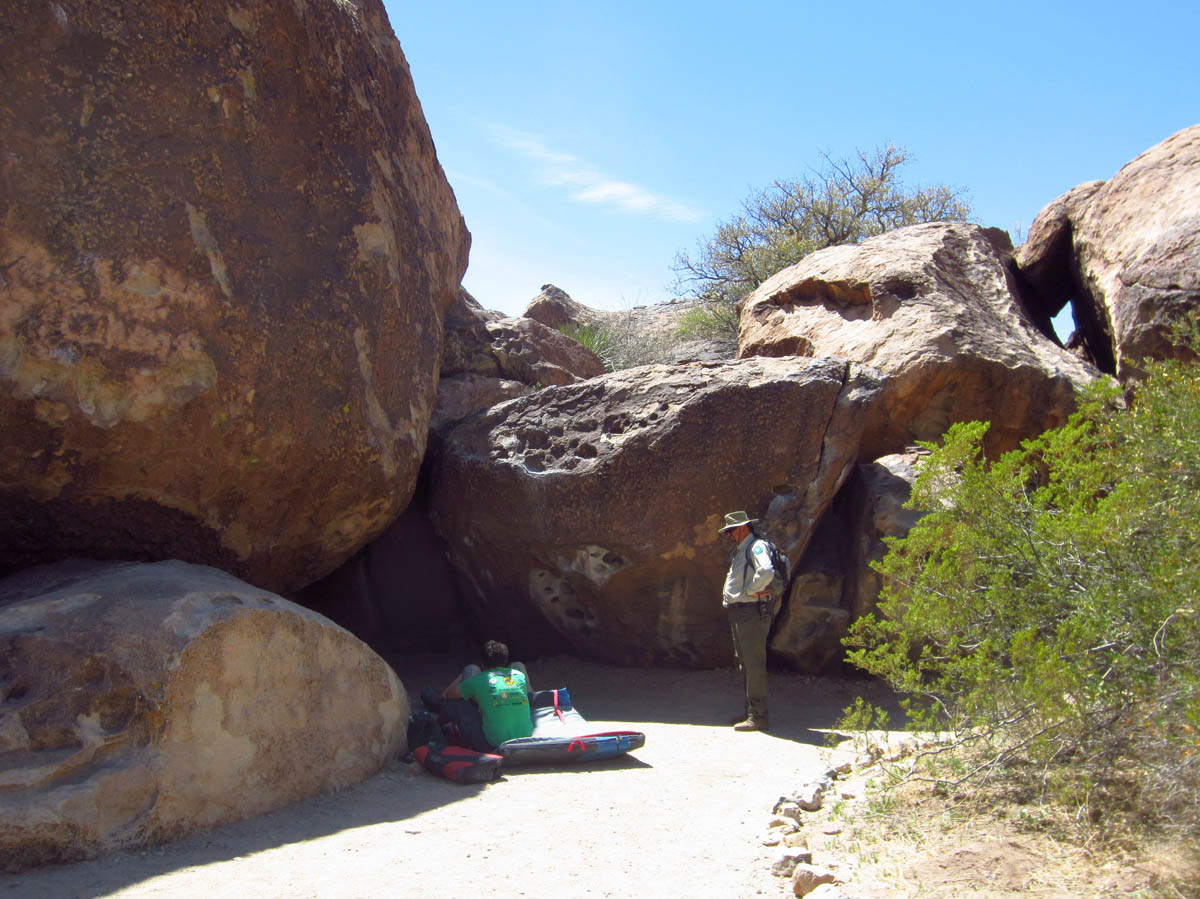 We come across two climbers having a nap on their mats, giving new meaning to “crash pads.”

When it comes time for the Pictograph Tour, it’s just me and Jorge again. (Where are these seventy people they keep talking about??) We start out on the tour, and I realize we are walking toward Site 17 on the North Mountain. “Jorge, we aren’t going to Site 17, are we?” “Yes, this is Pictograph Tour Nbr 1.” “Jorge, that is within the self-guided area. I have walked to Site 17 every single day on my lunch break–it’s the only place I am allowed to go on my own!“ “Well, maybe so….but you have never been there with ME!” “Jorge! I booked this tour to go some place where I CANNOT GO WITHOUT A GUIDE!” Eventually, he capitulates to my whining, but not without a 15 minute stop at Site 17 first. 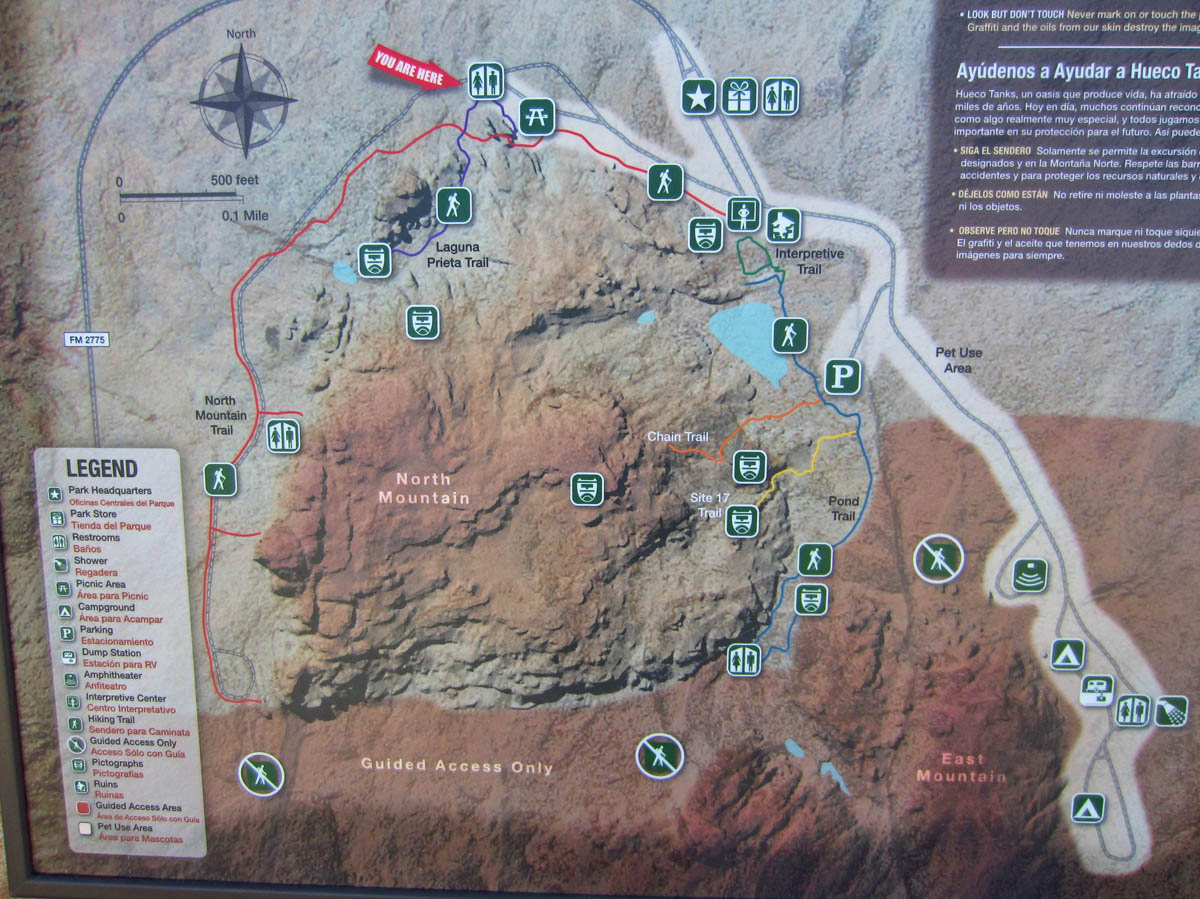 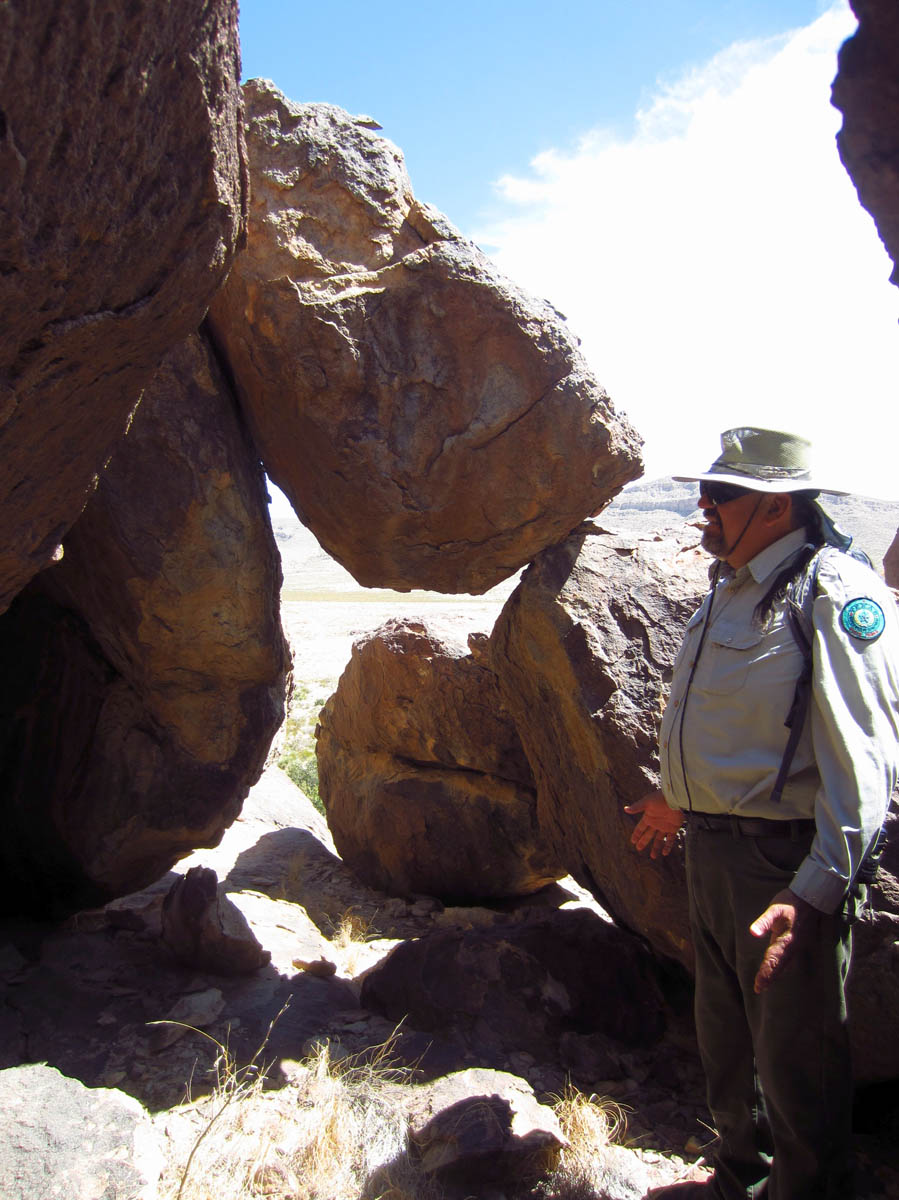 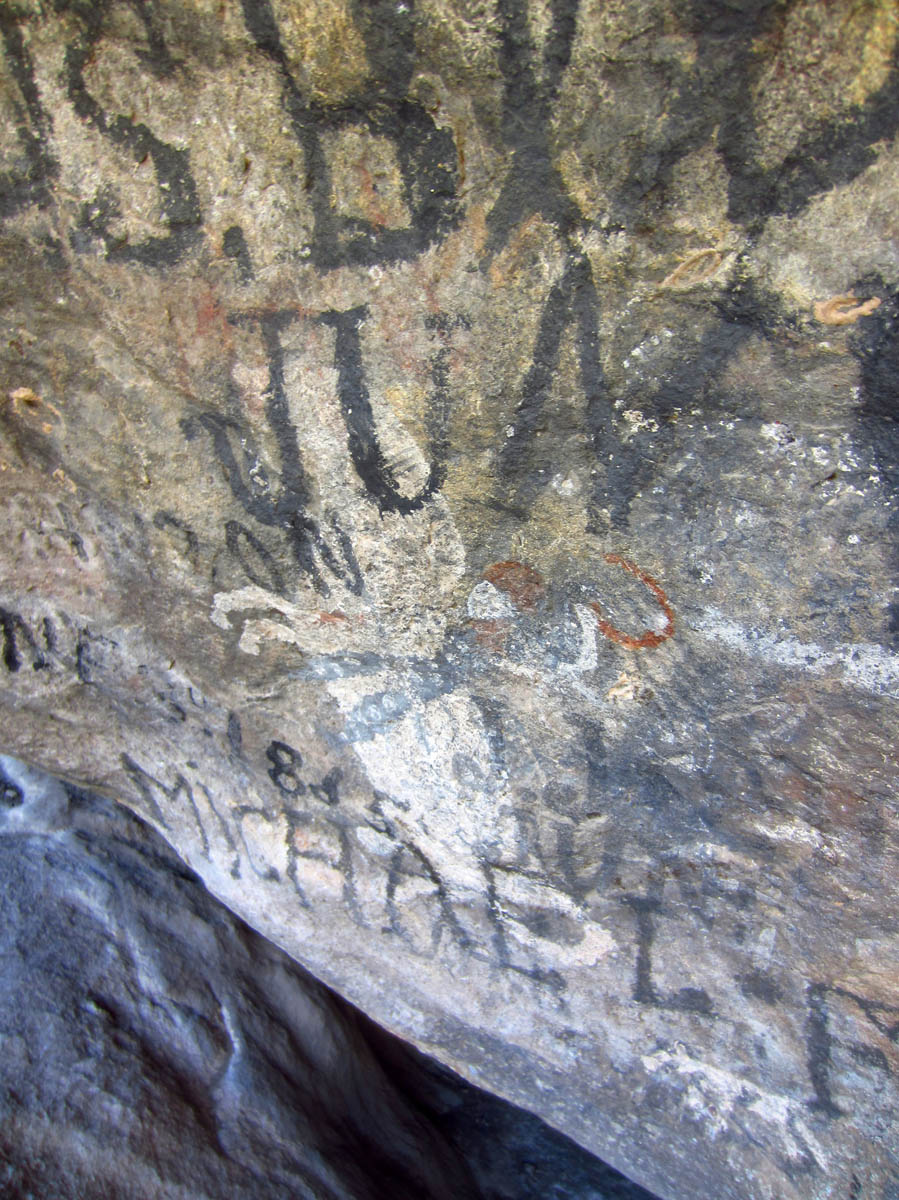 There is a horse and rider hidden under there somewhere…

We visit a couple more pictograph sites, but I am challenged to make out the markings, as my natural inclination is to gravitate toward the written word. Jorge tells me I must slow down and learn to pay attention. He tells me to sit on a rock and stare at the wall until I can find the snake. It takes a while, but eventually I see past the “fools names, fools faces, always seen in public places” and start to make out the image of the snake’s head, believed to be pointed toward a Hueco, or water source overhead. Can you see the snake?? 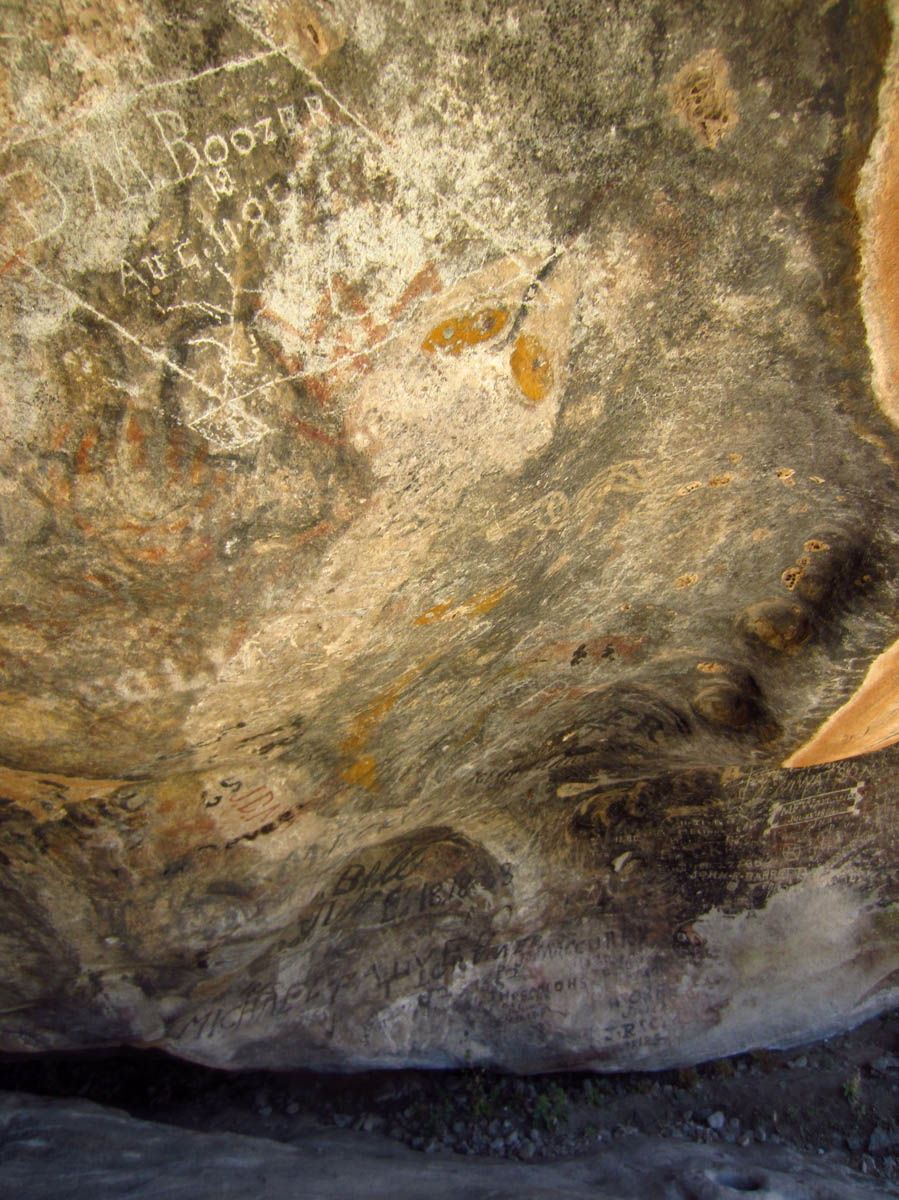 Can you see the snake?? 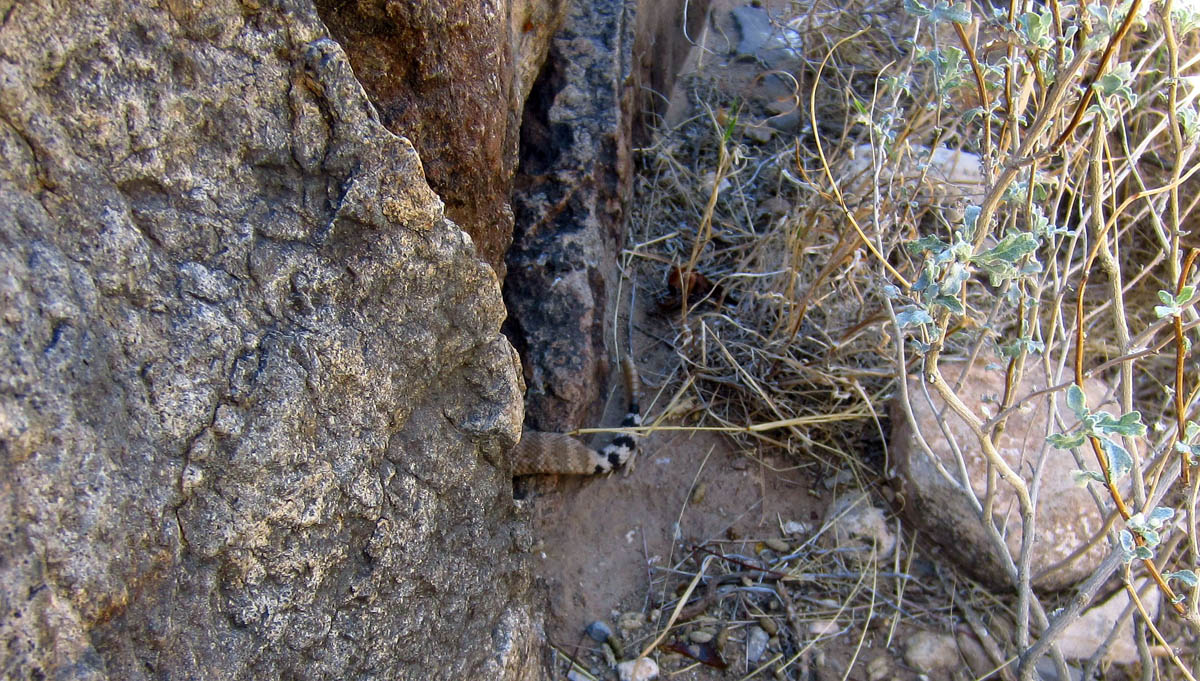 What about now? (Thank goodness I HEARD him long before I saw him — Jorge’s mantra “Pay Attention!” pays off!)

We stop at a few more pictographs, chat about the Native American History, and debate the need for what feels to me like paralyzing rules and an antiquated permit process. I tell him I have seen fewer restrictions on rocks that came from the moon! Jorge shrugs and says it is nothing he hasn’t heard before, but the alternative is to close the park altogether, because they can’t control the vandalism. Other historic / archeological areas don’t seem to have this much trouble. Some might blame proximity to the border, but I have not seen this in my travels throughout all the archeological sites in Mexico. I can’t help but wonder if it is a case of “What you resist persists.” 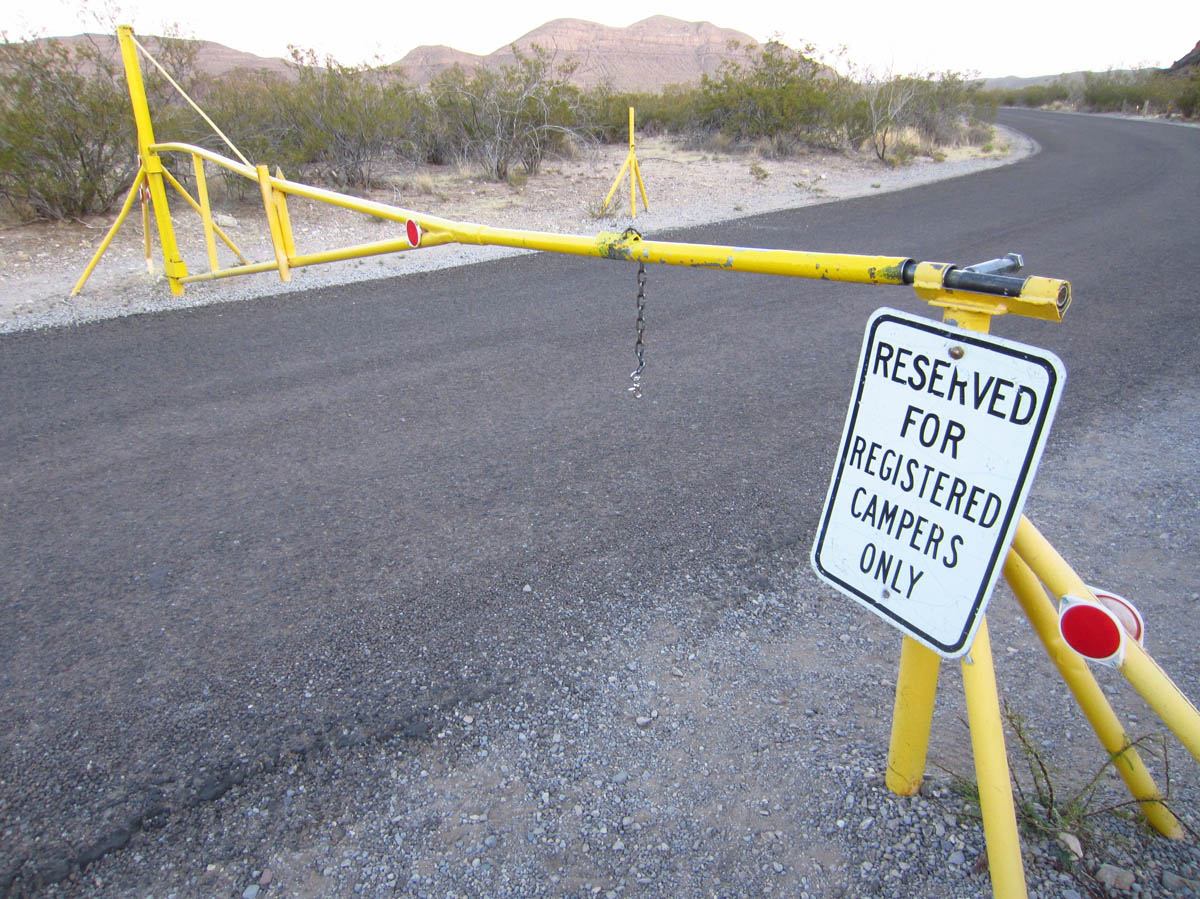 I am all for protecting our heritage, but like the Park Ranger in Big Bend said when I asked him if I could hang my hammock in the tree, “We strive to find a balance between protecting the resources while allowing the public to enjoy them.” Unfortunately, Hueco Tanks has not yet found that delicate balance.

So it’s no surprise, I decide to blow Hueco a little earlier than planned…