By now, news of my Dad has come from home, and I need to get to an airport and find a place to stow the Winnie to fly back to Texas.  Phoenix seems to be the most logical option, so as not to have to winterize the Winnie (pay no attention to that recent snow covering on the saguaros!)  So I head for McDowell Mountain Regional Park, a place I have been before, so I am familiar with the area.   I will make this my base for a couple of days while I scout out suitable storage areas. 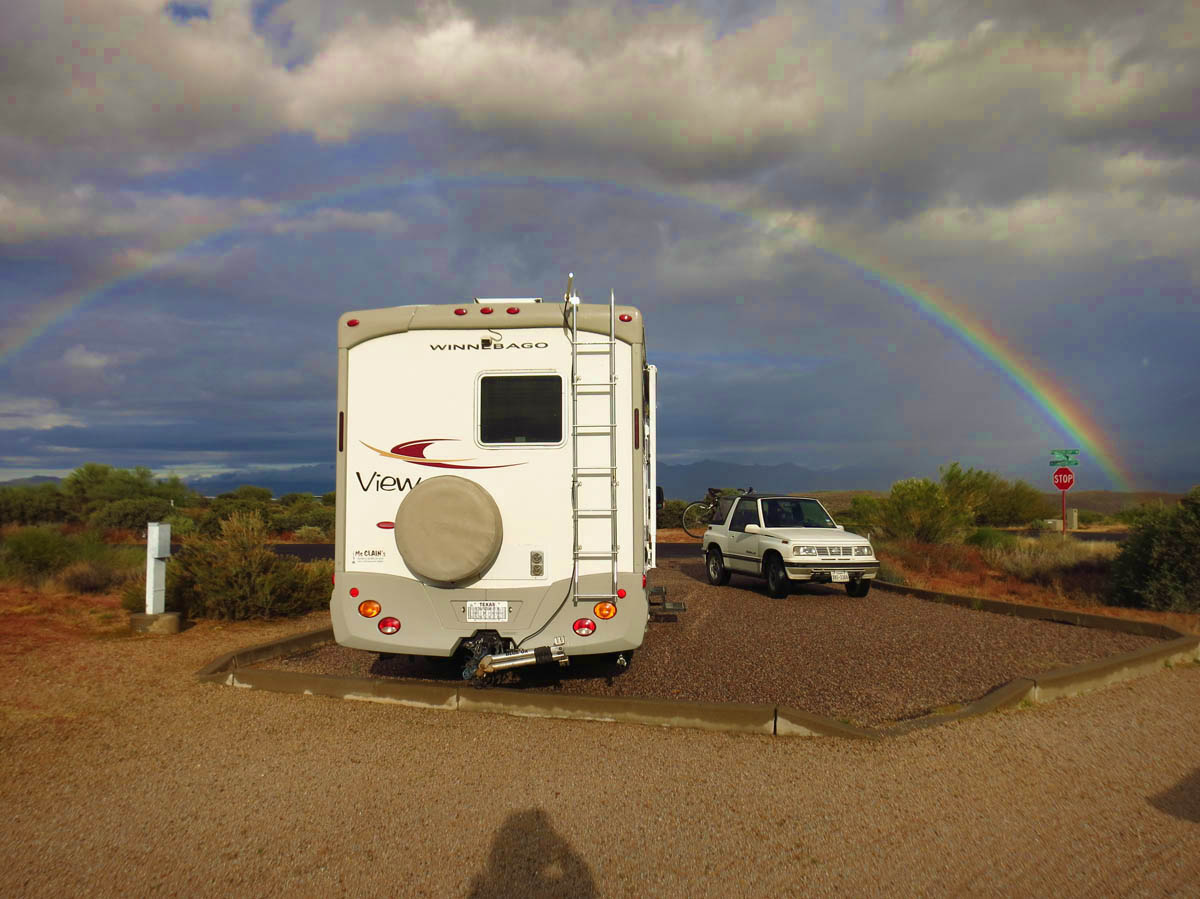 After two days of rain in Valley of Fire, I arrive at McDowell to a rainbow!

But McDowell also offers an added bonus.  My friends Jim and Gayle are there!  They left Zion a bit suddenly, leaving me with nothing but a mournful “Goodbye, Peterman! man…man…man” echoing across the canyon.  So I would have a chance to see them one more time, and bid them a proper goodbye.

But also, I had another motive.  After having traveled, hiked, and biked with the Red Rocks Gang for a couple of months, I had become intrigued by their love of mountain biking.   We had talked several times about my coming to McDowell, renting a mountain bike, and test driving some of the easier trails with them to see if it was a sport in which I wanted to invest.  And “invest,” one must as comfort comes at a price in this sport! 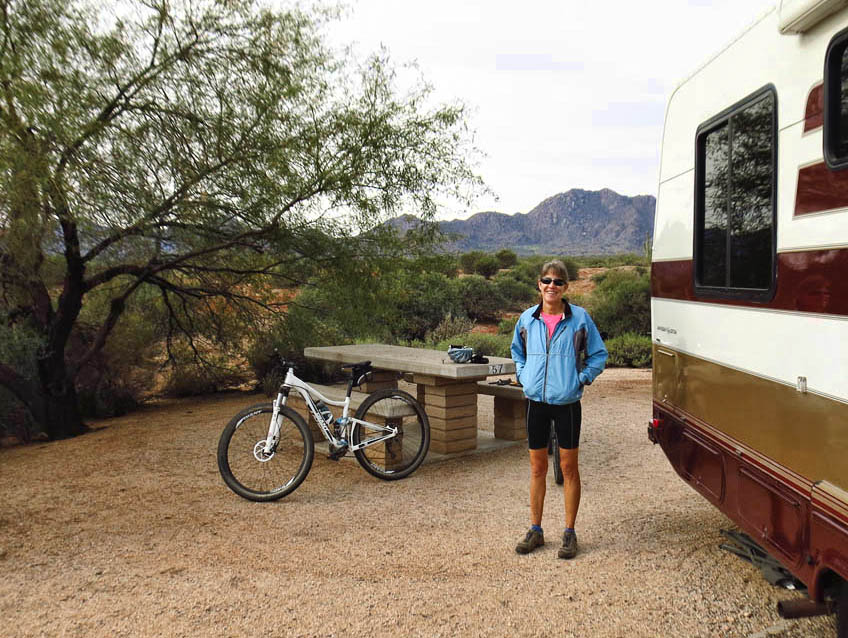 Jim and Gayle scored the best spot in the park!

My current Trek hybrid is over 15 years old, so after hundreds of miles from Niagara to the Pacific Northwest, I feel like I have gotten my money’s worth, and am entitled to consider a new bike.  The question is, which kind of biking do I want to do?   How could I make this decision never even having sat on a mountain bike before? 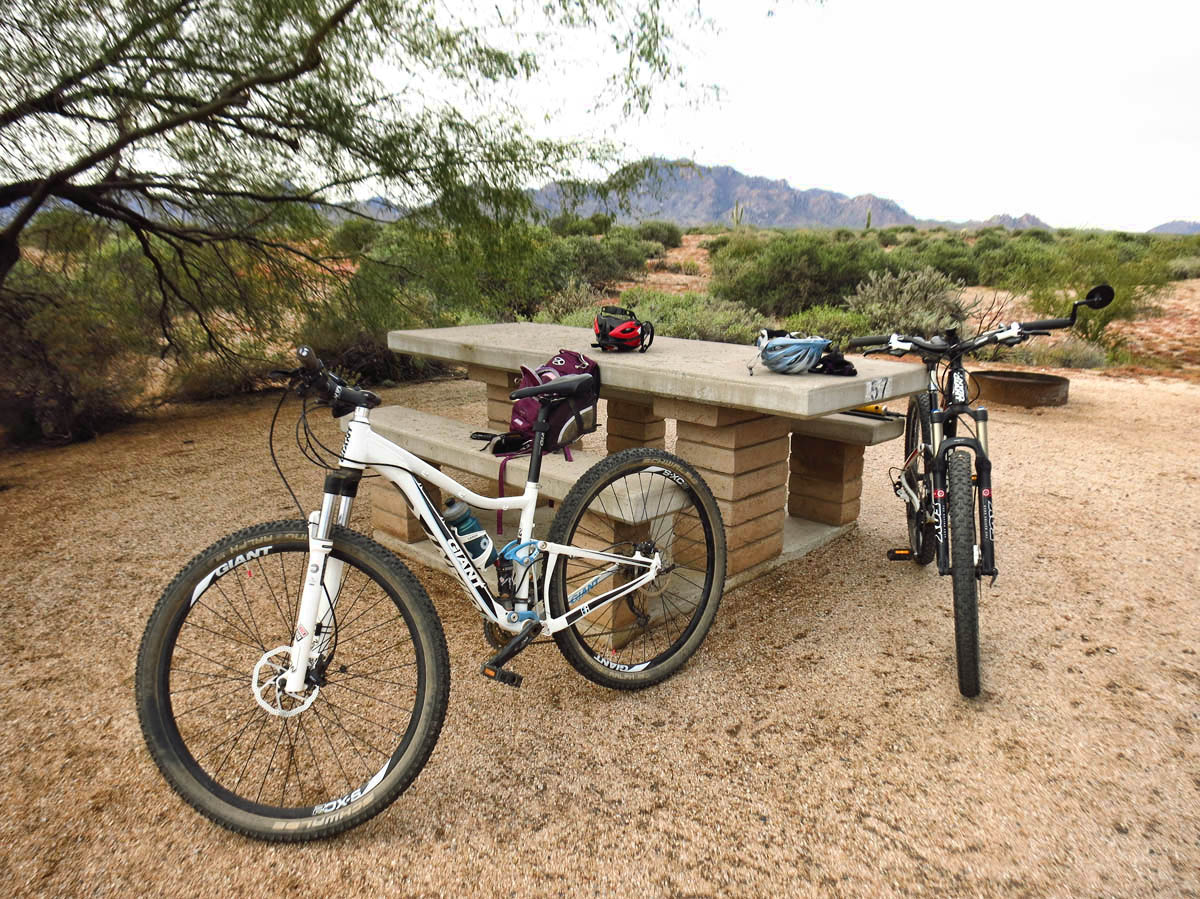 Get ready to roll!

Peterman, who is on hiatus while waiting for his Xarelto to kick in, has generously offered up the use of his bike for a test drive.  I accept reluctantly after inquiring as to the need to “lawyer up.”  😉   The first thing I notice when I sit down?  “It’s SPRINGY!”   Instantly, I see what all the suspension fuss is about.  Like sitting down on a Tempurpedic for the first time after a lifetime on a futon.  But oh, just you wait! 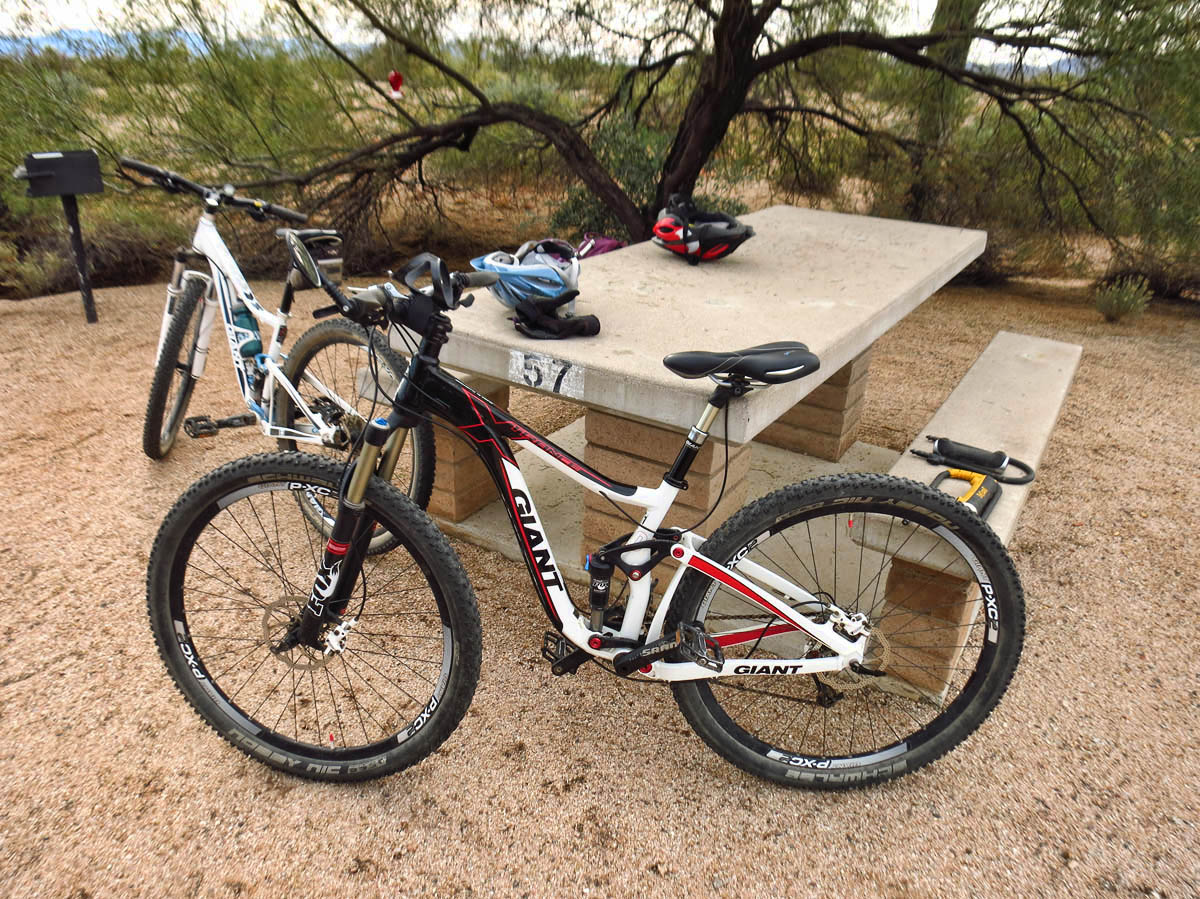 The “magic carpet” of bicycles.

Gayle asks, “How far are you up to?”  She rattles off some choices, but I am lured in by the one that carries the distinction of being her favorite loop.  “LET’S DO IT!”  I say!

I have ridden over some pretty rough dirt roads in my past, but never ones with three to four foot dips and rises.  Gayle gives me a few pointers, and we are off and rolling.   As we come to the first ditch, I brace for impact, holding on, clenching my teeth, and preparing to be pitched over the handle bars.  But instead, the bike glides over dips, ruts, rocks, and obstacles with nary a bump.  This must be what it feels like to ride on a cloud!   I am “yippie-ing and yahooing” all the way down the canyon!

As we approach the downhill stretch of the Pemberton Trail, Gayle tells me we are now at her favorite stretch along the loop.  She speeds up, and I am pedaling as fast as I can to catch her.  She shouts out the hazards up ahead “Deep sand!  Don’t slow down! Keep pedaling!”  She occasionally stops to wait for me to catch up, throwing a sly smile over her shoulder, telling me what lies ahead.  “Just one more uphill stretch” said with a tone that sounds a little too much like Dr. Evil’s extortion threat of “One meeellion dollars!”

Soon, we have completed the ten mile loop.  I have broken Peterman’s seat not once but twice, run through several thorny cactus plants, splashed through a slurry of mud, and stripped the gears a couple of times, but I don’t think it is damage he will notice…at least not until the Xarelto takes effect.  😉 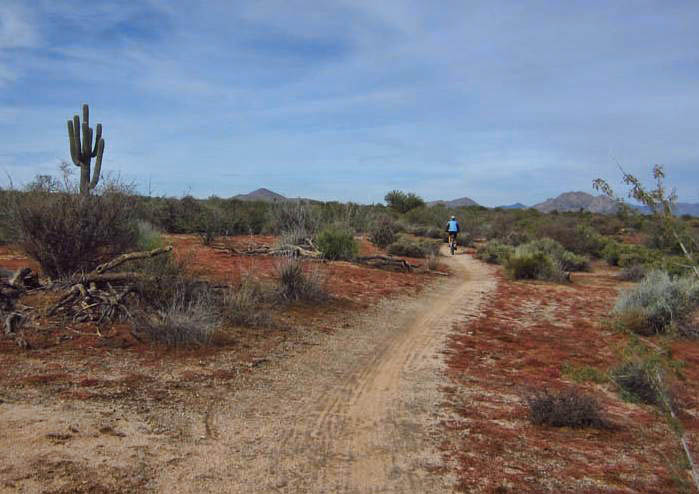 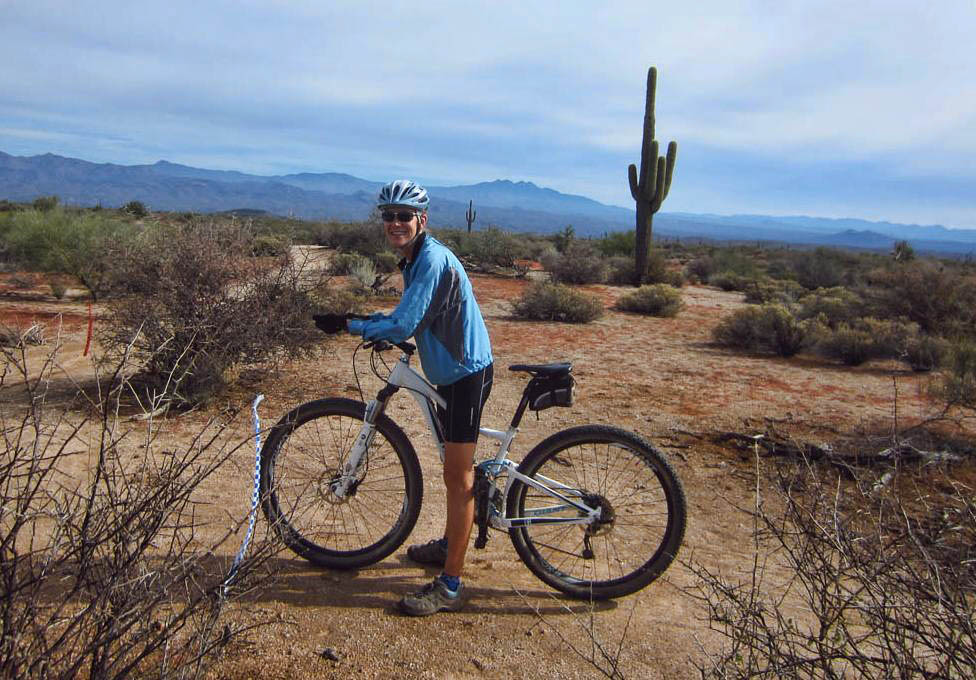 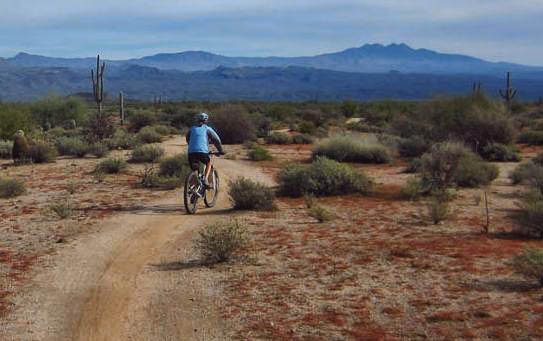 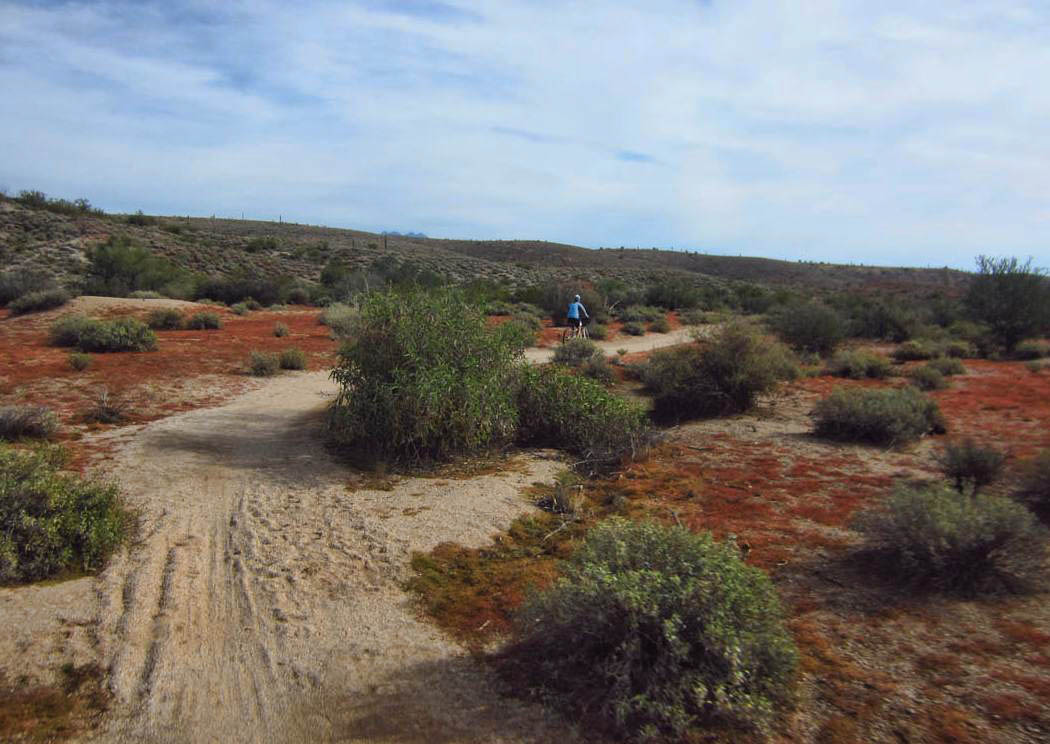 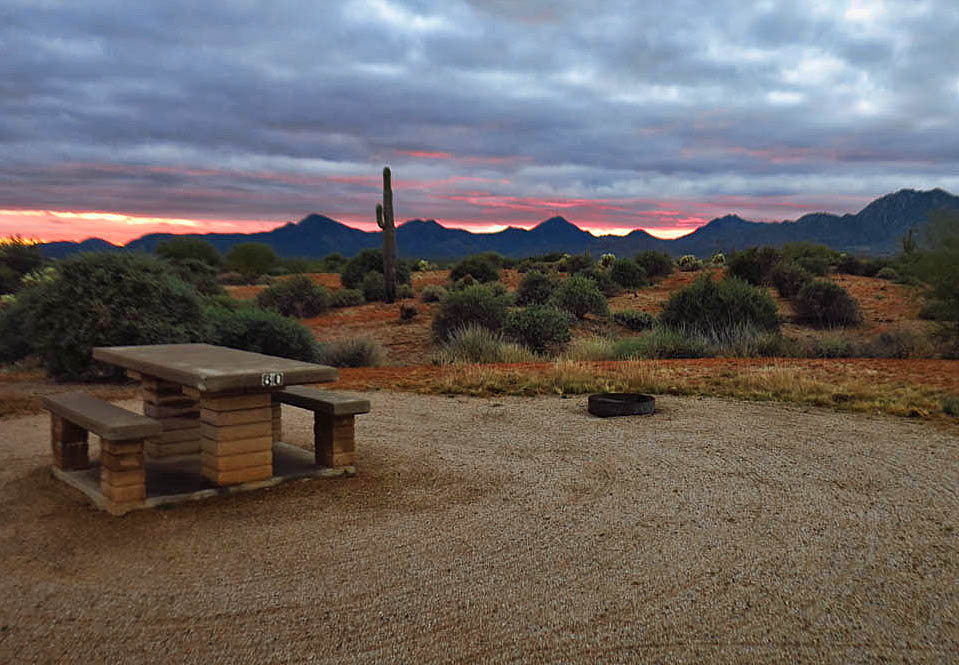 Love this park! Where else do they sweep your campsite?

10 thoughts on “One Last Look Back….Aaaah, to be Twelve Again!”