In recognition of my birthday last week, I got to pick the hike….a lot of pressure, as this is a no-win proposition with this tough crowd!  Over 80 degrees, and the Coloradans will start to melt.  Under 70, and I lose the Floridians.  Under three miles?  Not worth getting dressed for in my opinion.  Over seven, and I eliminate participants due to pets at home. 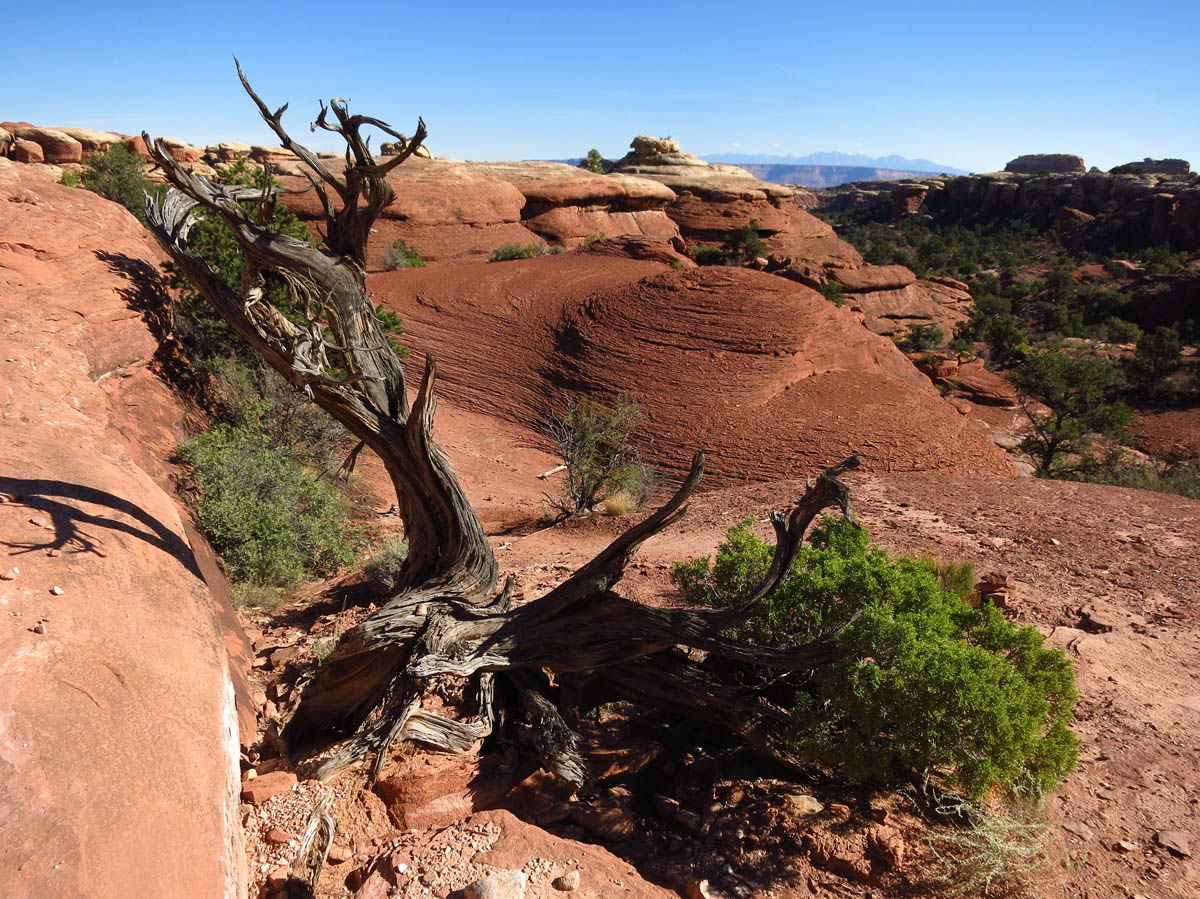 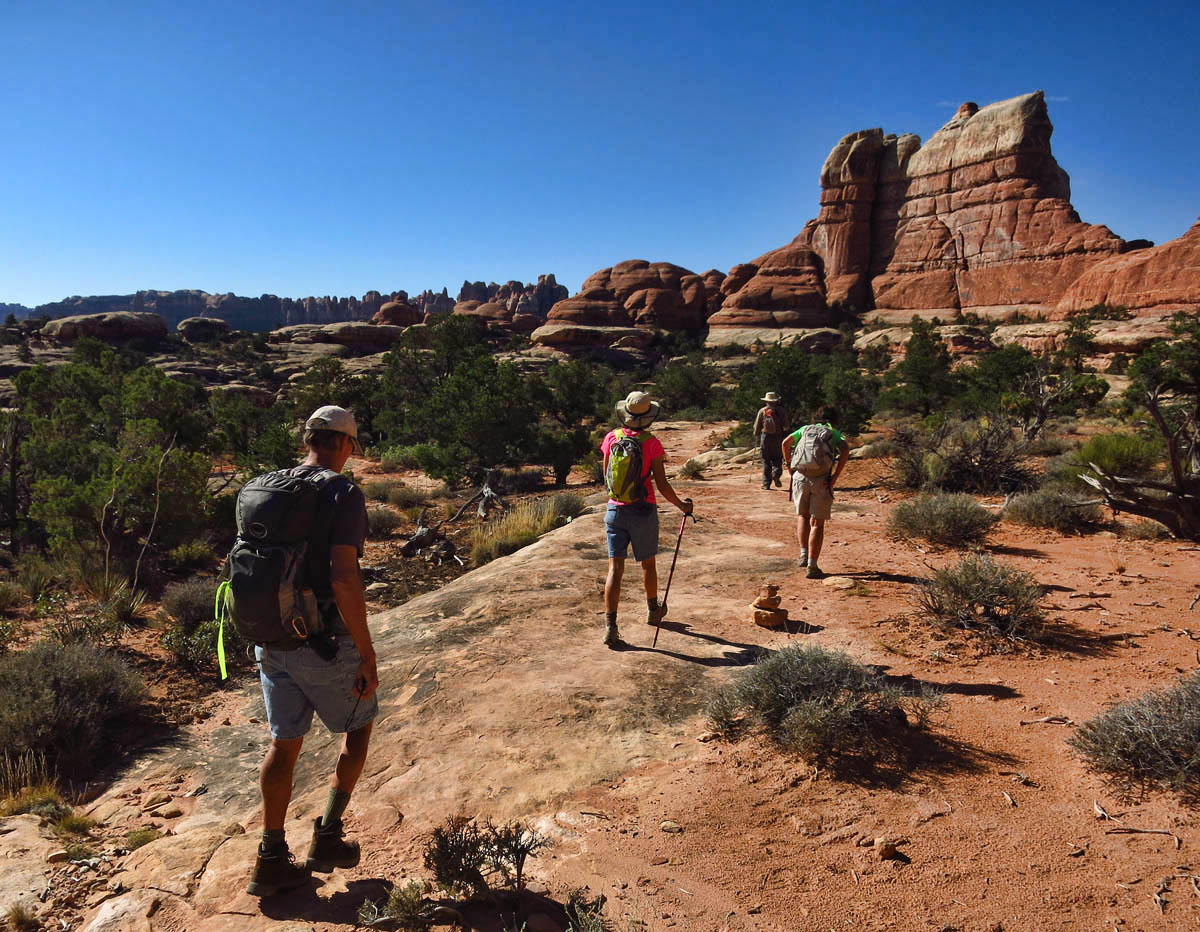 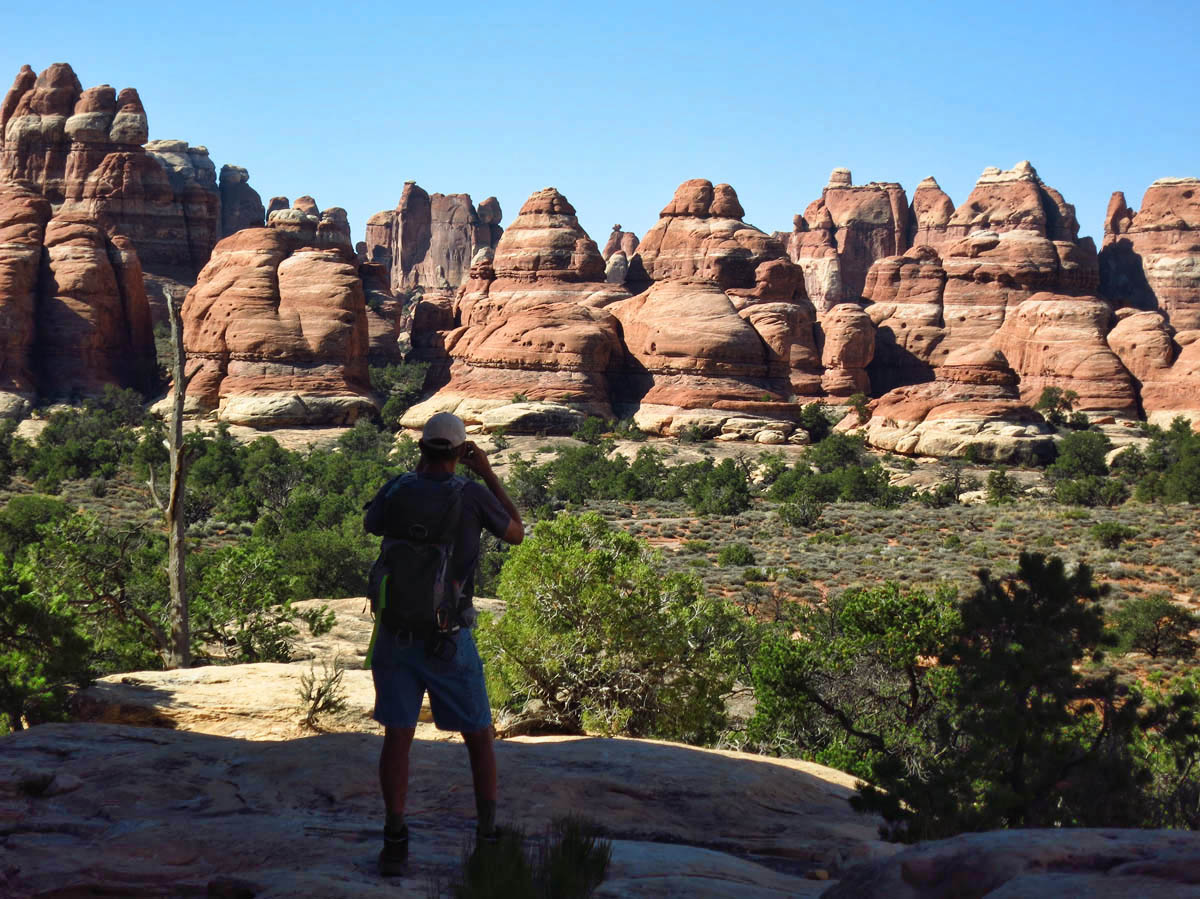 I make a joke about being “Queen for the Day” which backfires on me.  I am told that since I am “Queen,” I must also pick the departure time, which is even more daunting than the destination with this group.  Some get up before the sun, while others are like me, members of the “Royal Order of the Night People.”    I try to get input from Mark and Gayle to no avail.  I have never liked being the leader in the game of “Follow the Leader.” 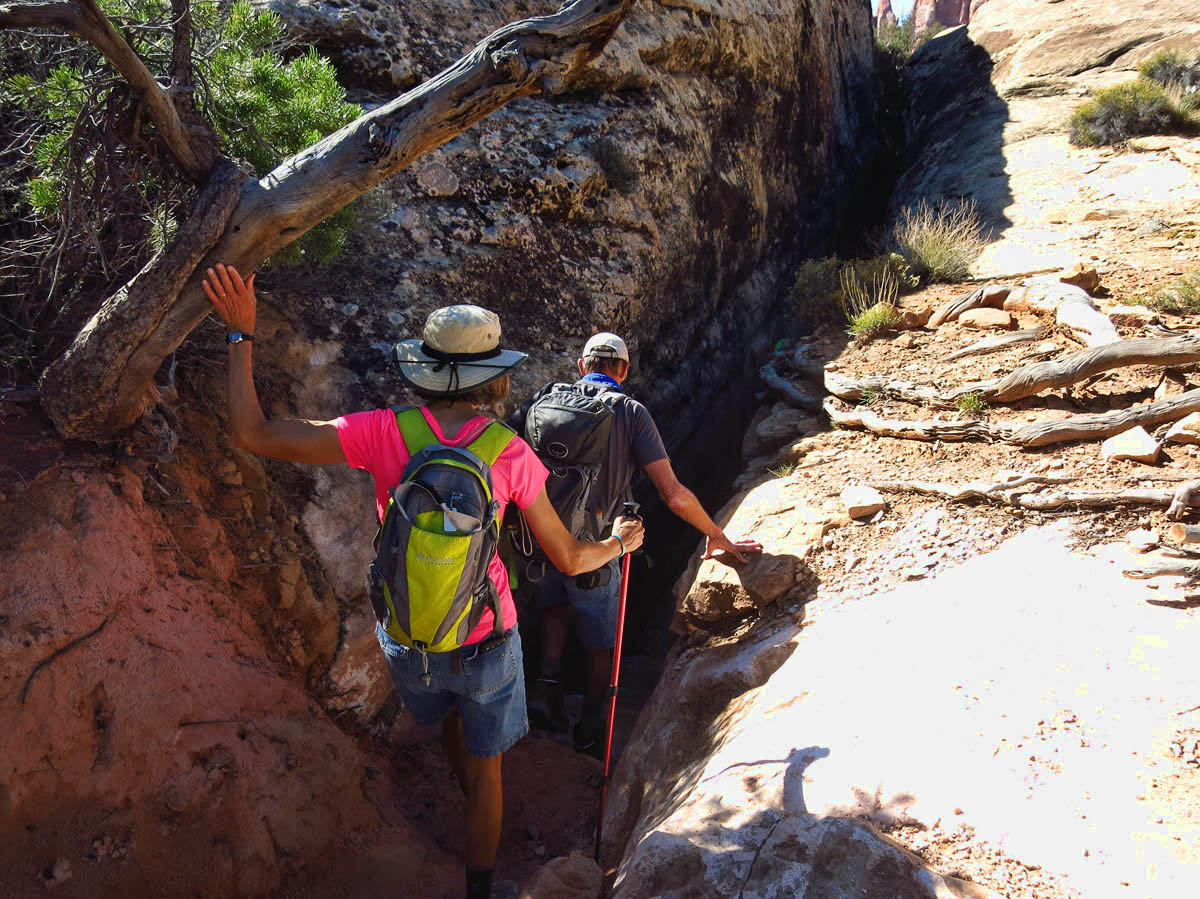 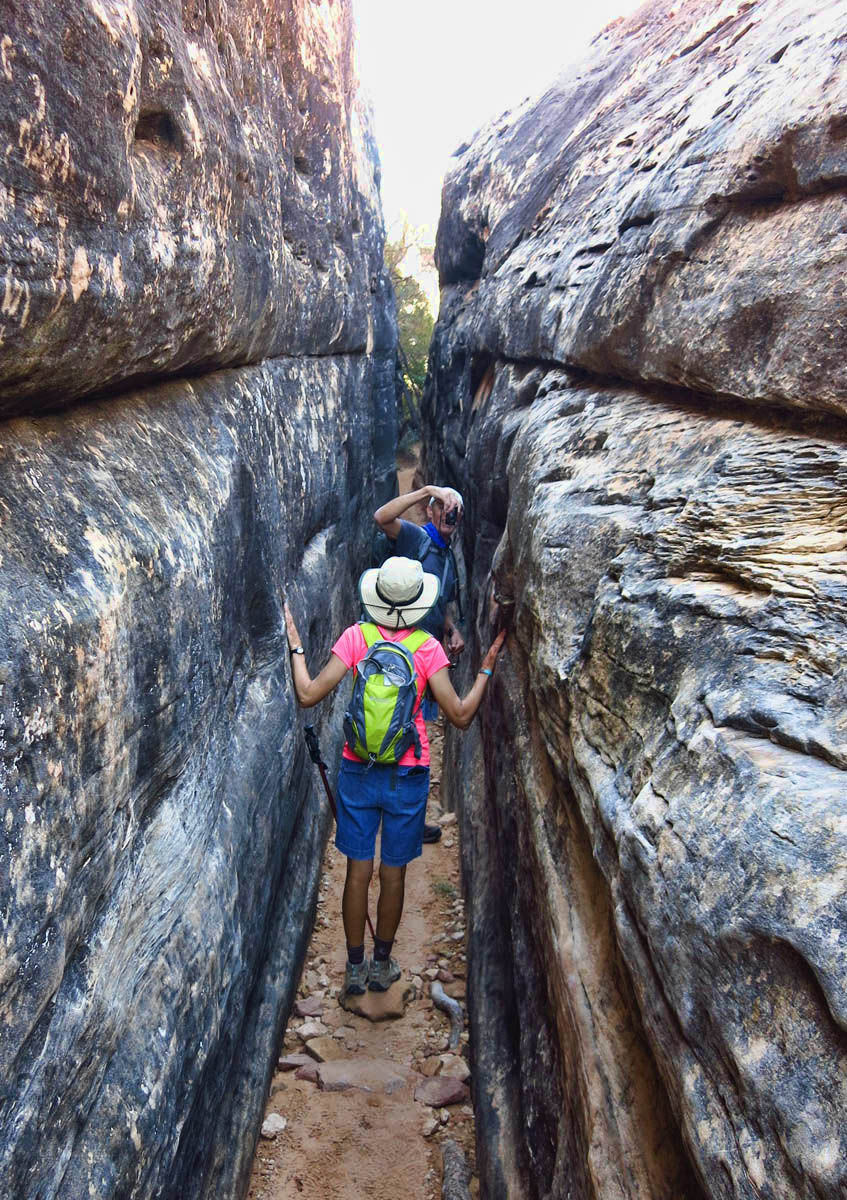 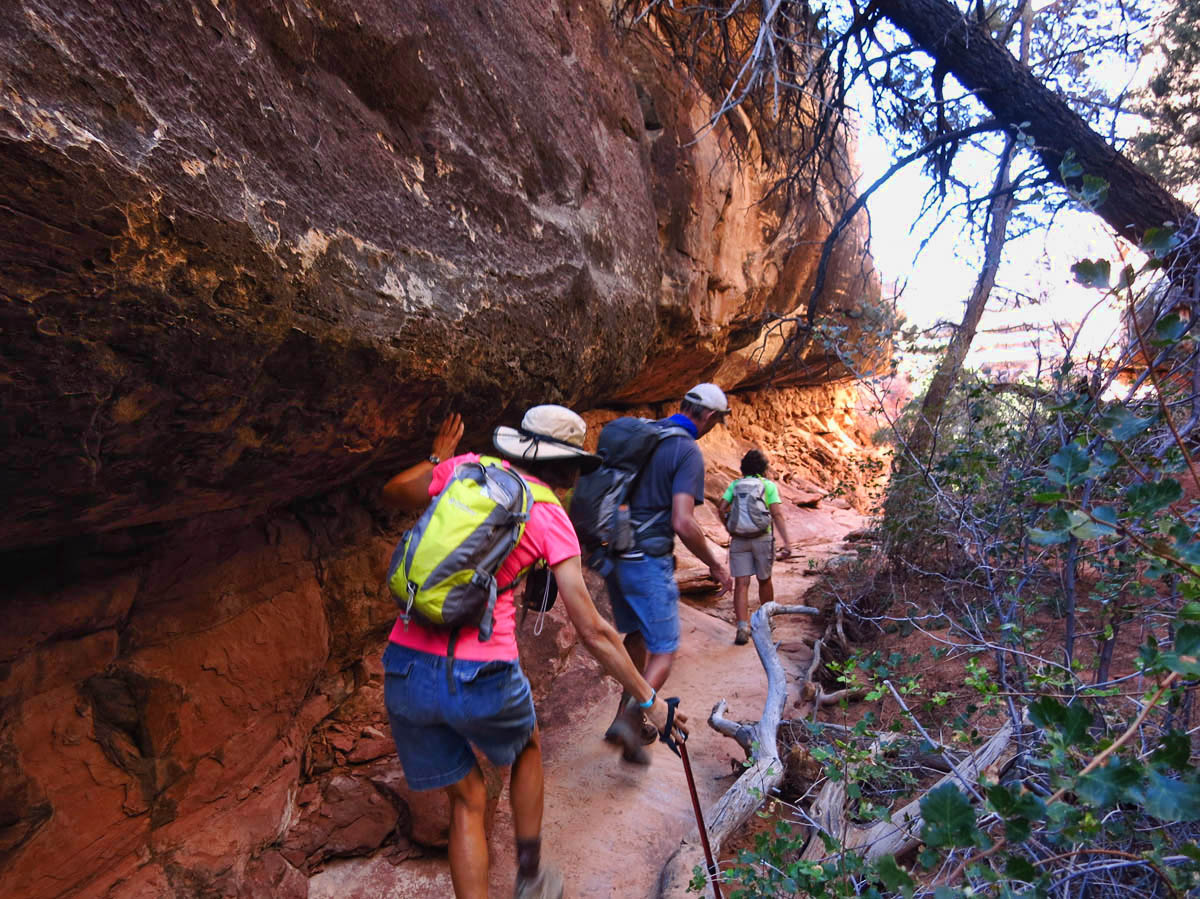 But it’s my birthday.  And there is one thing I have wanted to do since a year ago, visit the Needles District of Canyonlands.   This National Park is divided into three districts; Island in the Sky, the Needles, and the Maze.   Last year, all my time was spent in the Island in the Sky district, with no time to explore the remaining two districts.   Research indicates that the best way to experience the Needles District is the Chesler Park Loop trail, as it offers the widest variety of terrain for which the park is known.    So I choose this 11 mile hike, along with an 8:30am departure time, which after the 90 minute drive required to reach the trailhead, would prove to be too late due to the unseasonable heat.  My self-appointed “Queen for the Day” title would soon have my not-so-loyal subjects chanting “Off with her head!!” 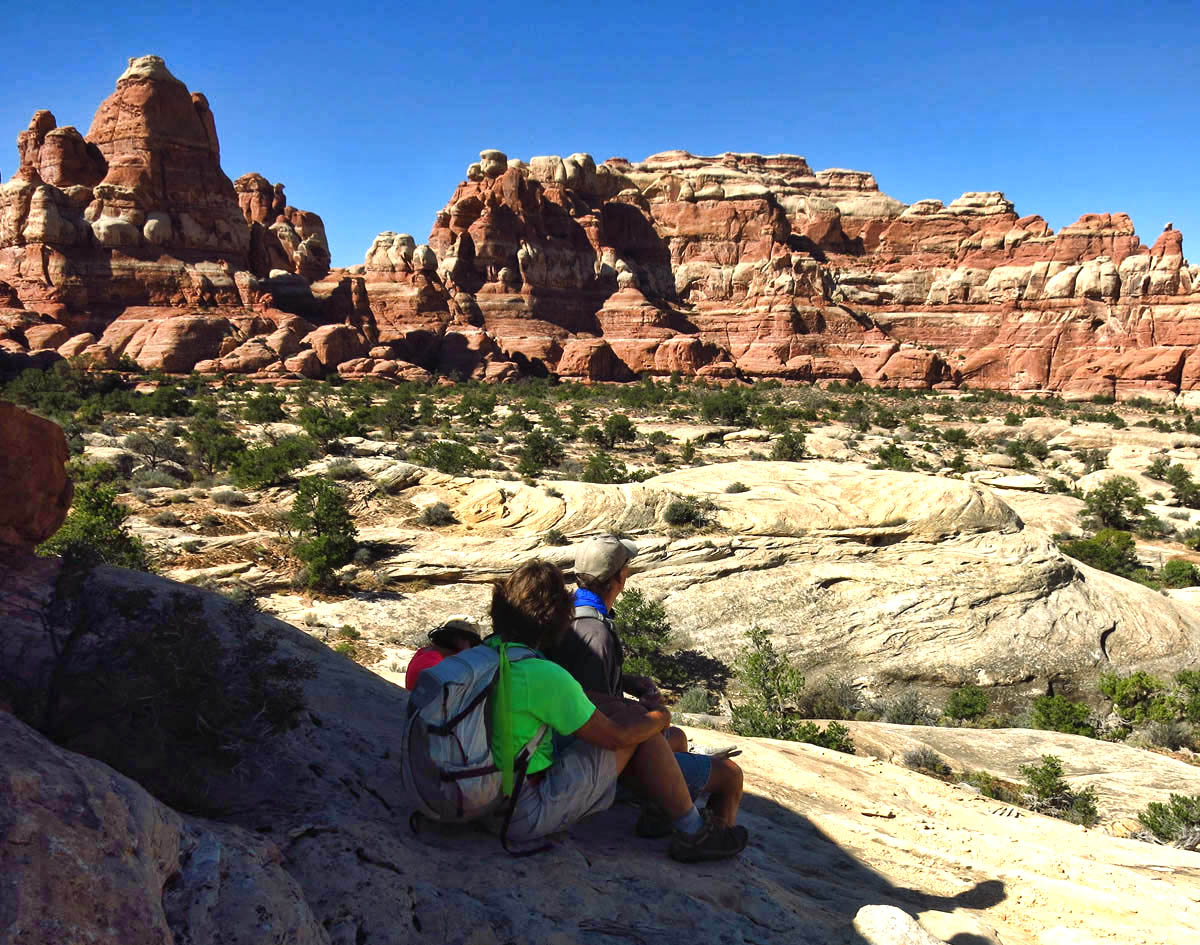 Finding a shady lunch stop is not so easy here. 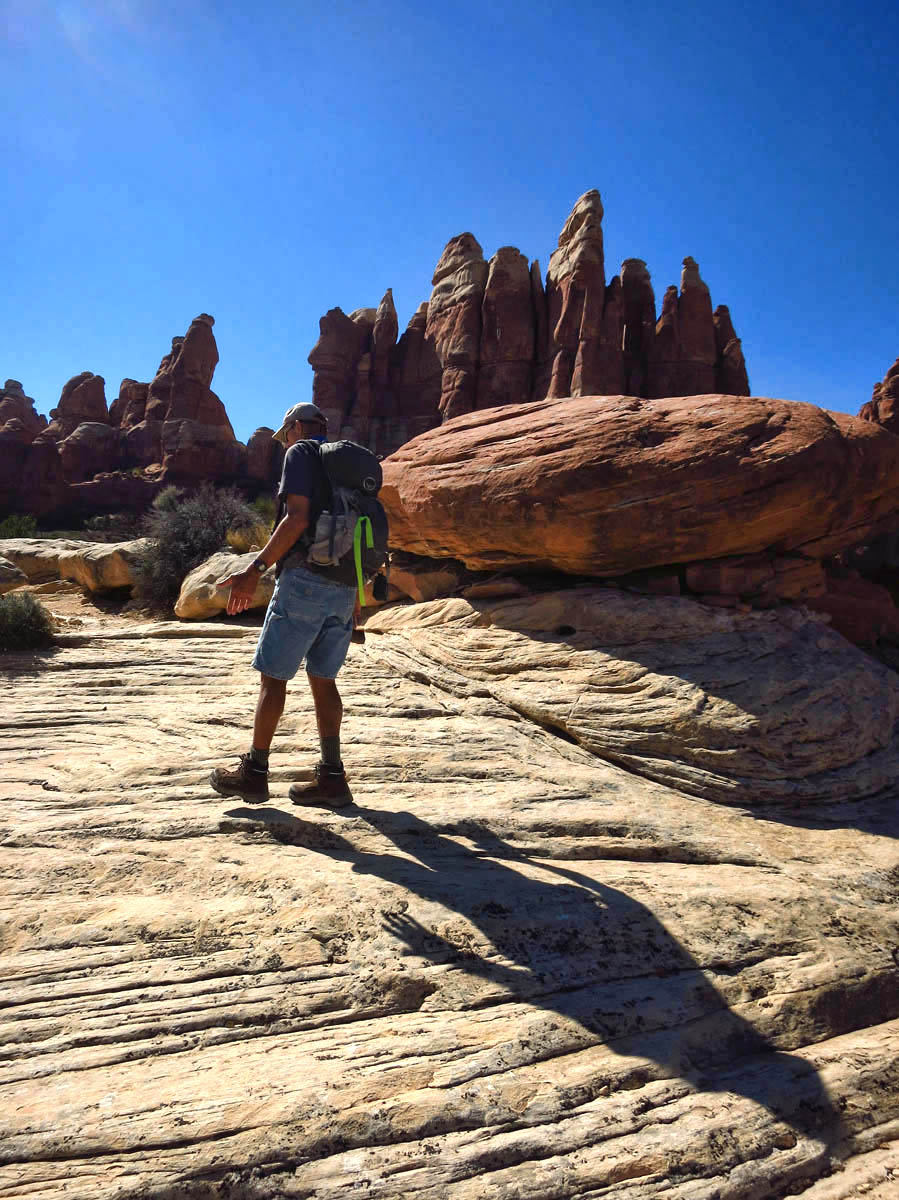 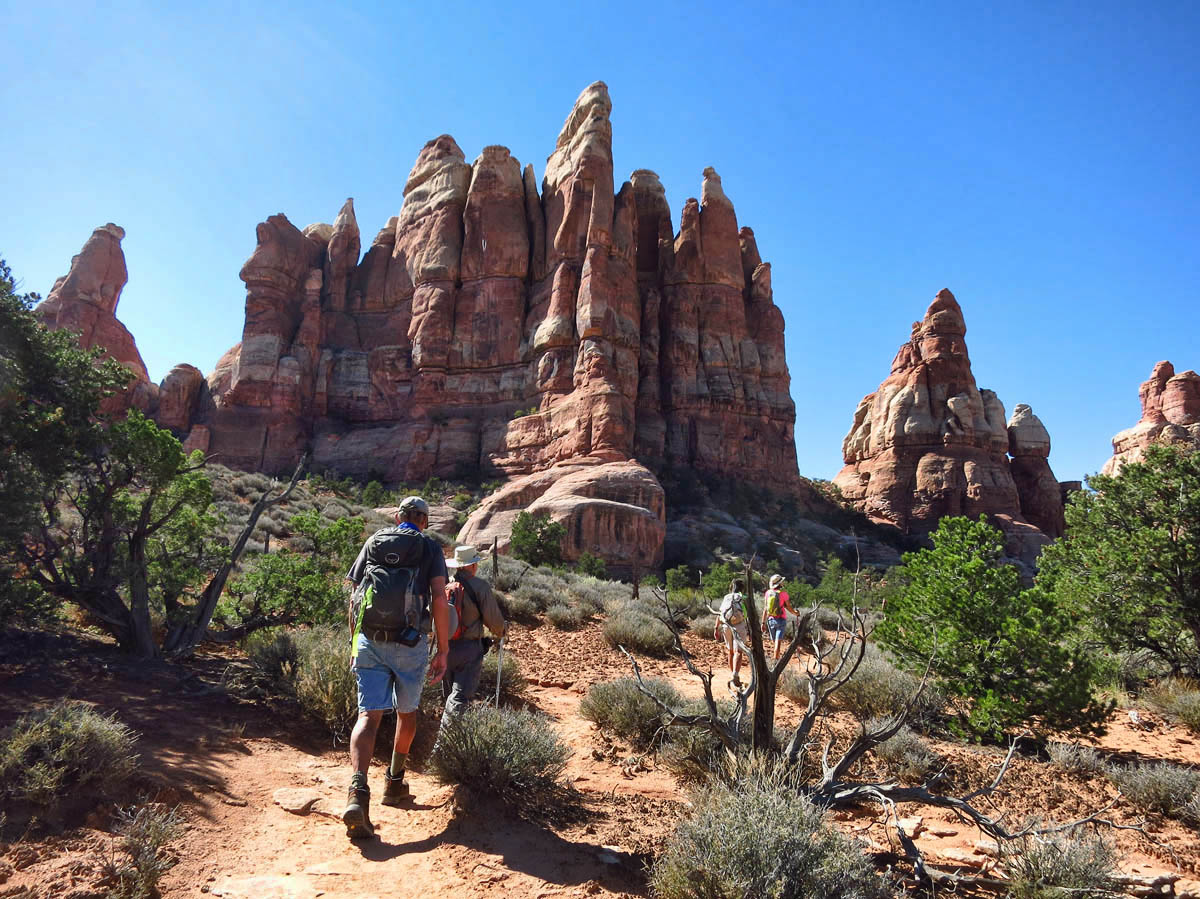 This section of the trail makes me think of the approach to “The Emerald City of Oz.”

We arrive at the trail head at 10:30am.  Jim is having a good day.  This is good news, because dialogue along the trail is sure to be lively.  However, it is also bad news because I won’t be able to catch up with him long enough to engage in it.  He takes off out of the parking lot like he has been shot out of a canon.  It takes me half a day and a question about internet service providers to catch him. 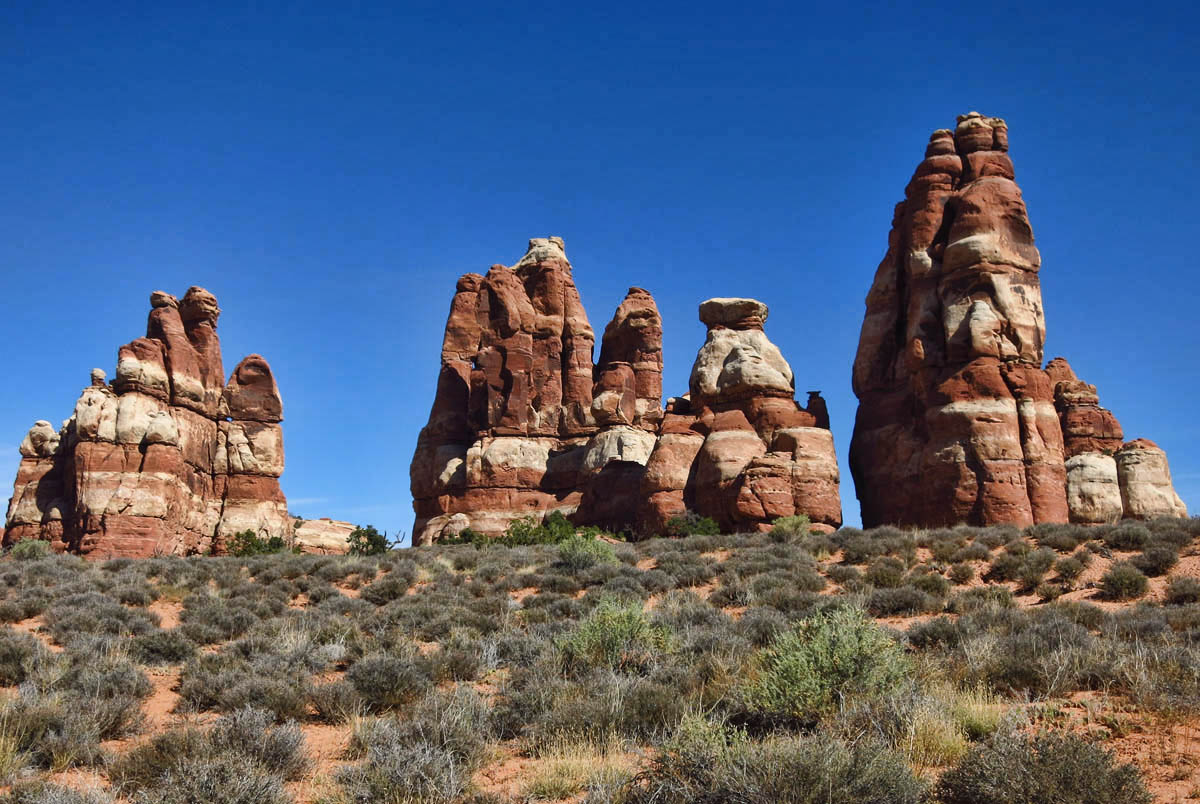 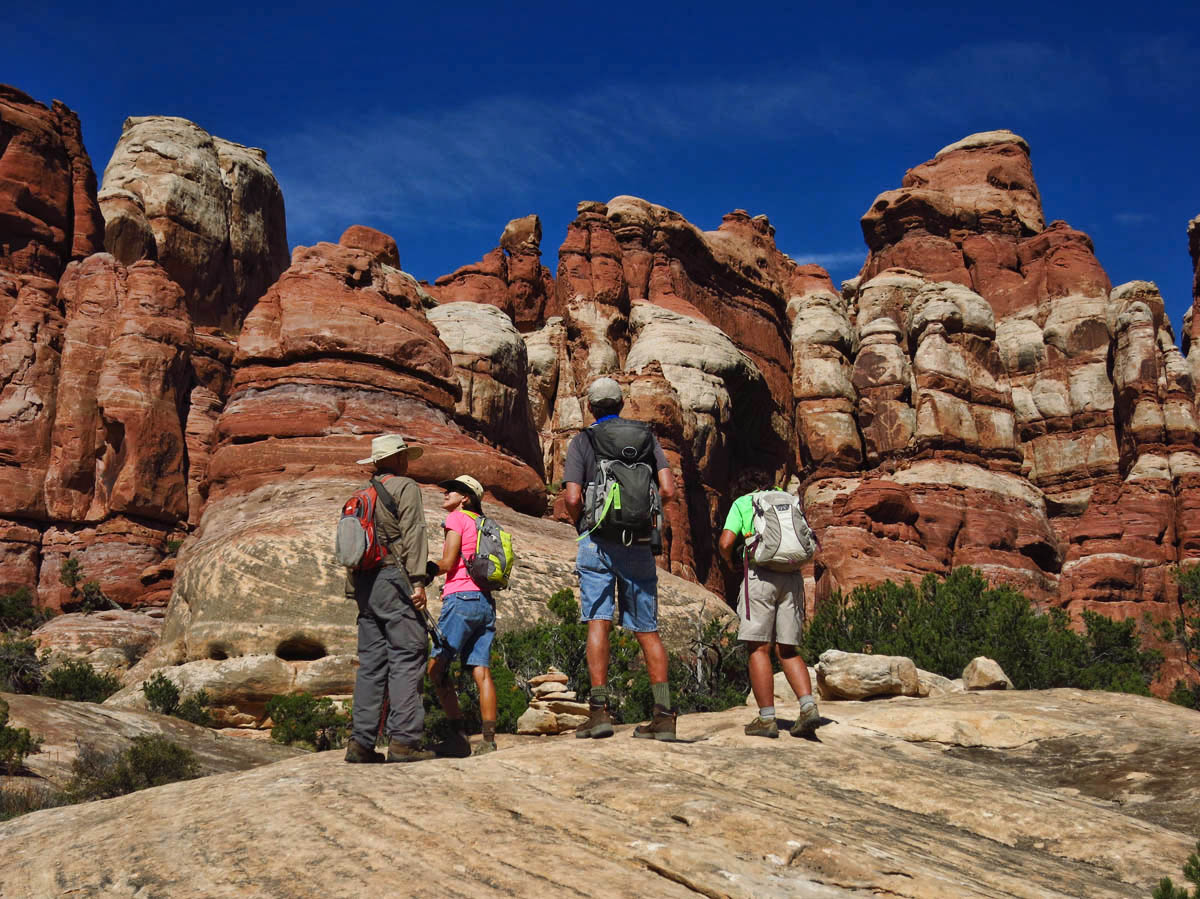 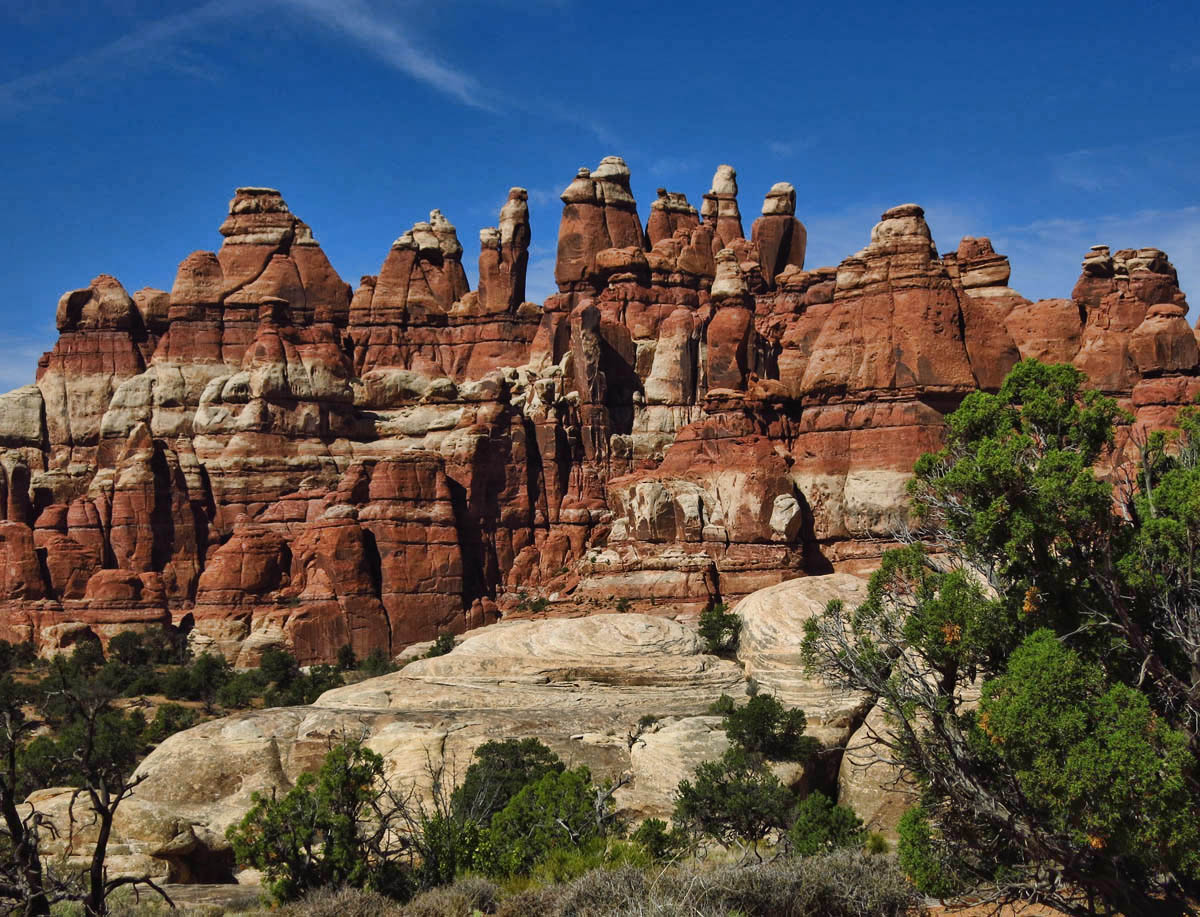 This is my first “big hike” in over two weeks, and I am slow to rebound.   To add to my slow-down, there is mind-blowing scenery around me in every direction!   I want to stop, sight-see, photograph, and just ponder in general the awe-inspiring surroundings.   But I am reminded of the “Don’t Sleep in the Subway, Darlin’” hike.   If I want to make it all the way around to see “The Joint,” which is at the exact halfway point, I had better shake a leg…literally!   There is talk of a decision being taken at the 4 mile point whether there is time to complete the entire loop.  I pick up the pace, as I don’t want to be the reason for turning back! 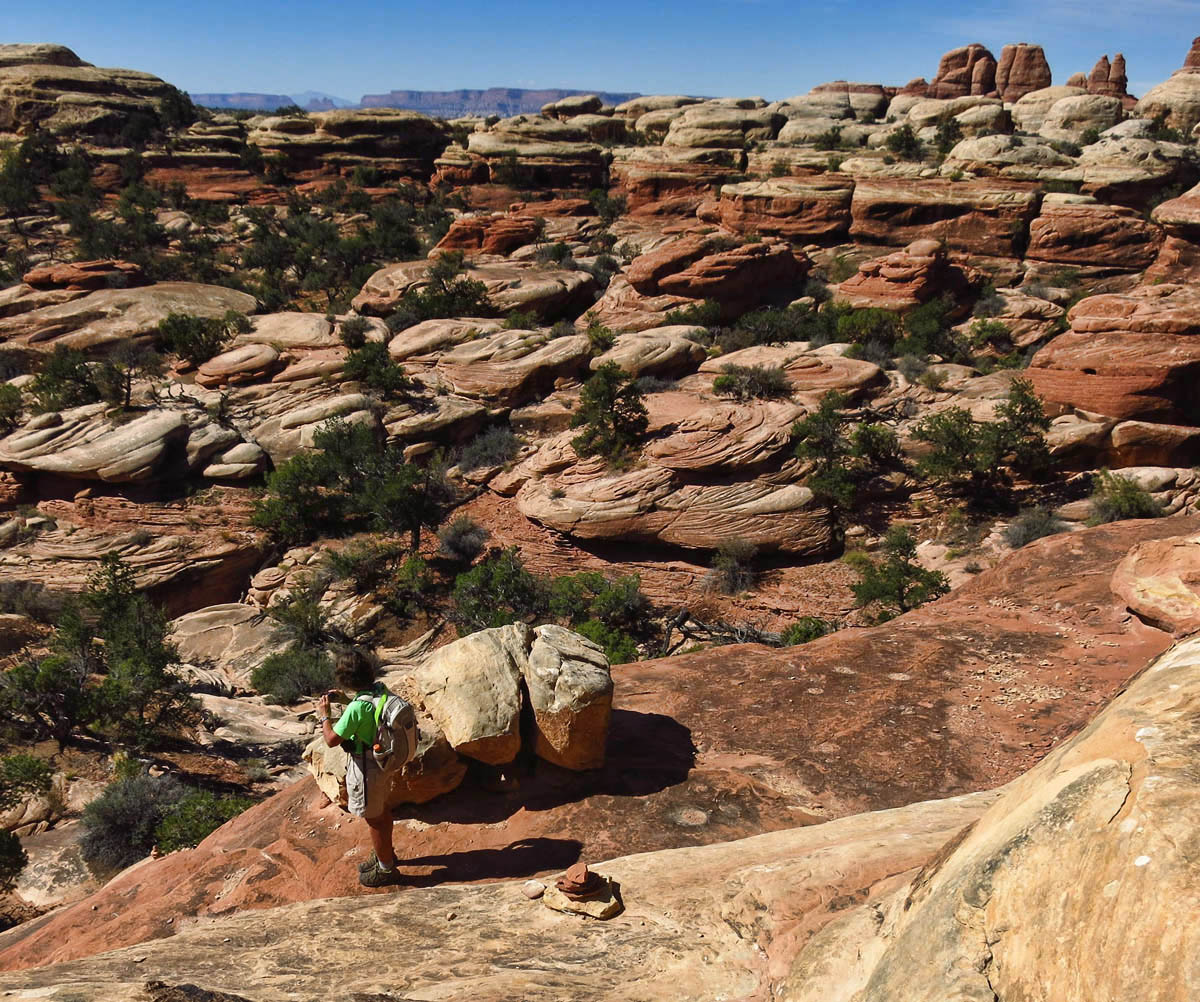 Photographing Bobbie. Both an adjective and a verb. 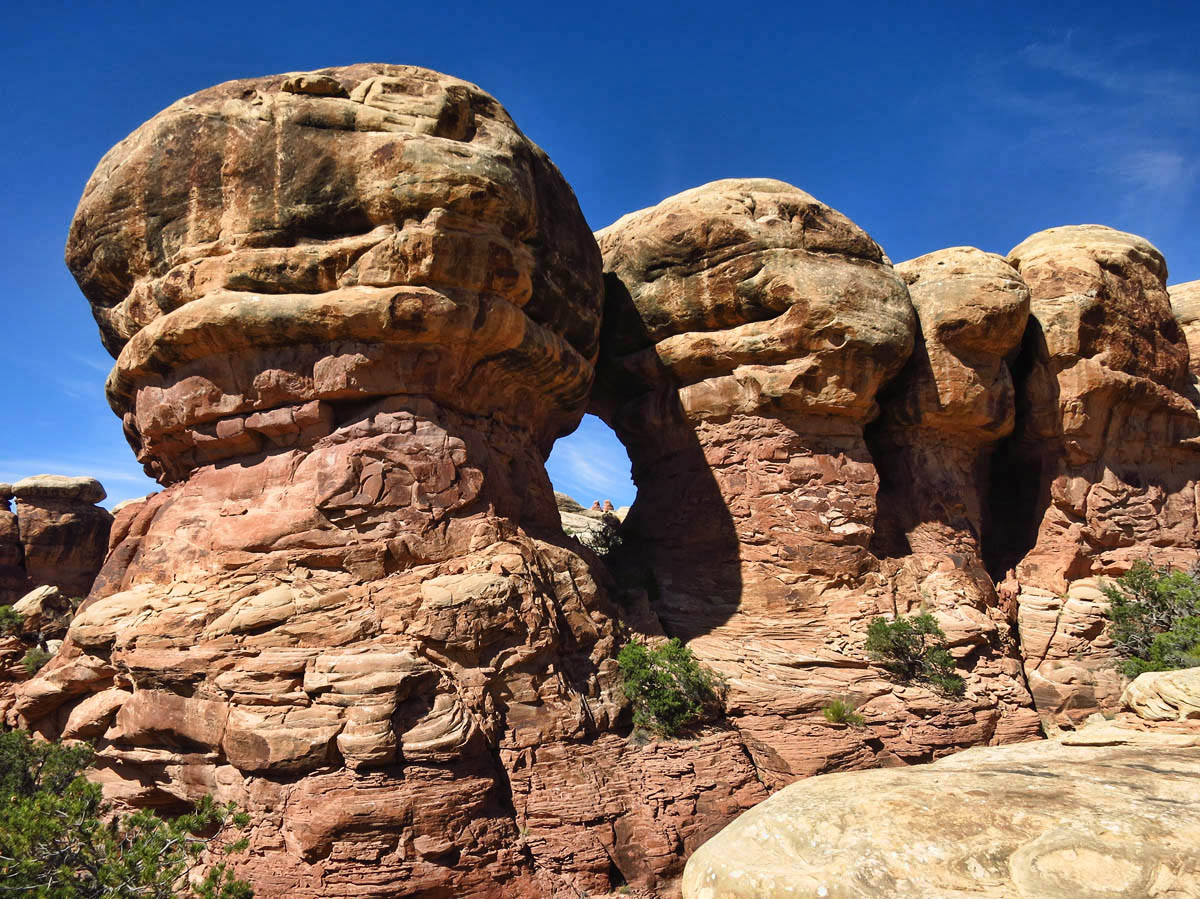 The Chesler Park Loop is shaped like a balloon on a string.  The “string” part out to the Chesler Park Overlook is about three miles.  The actual loop or “balloon” through the Needles formations and the slot canyon of The Joint trail is another 5 miles, and the hike back from the overlook another three, which accounts for a little over eleven miles. 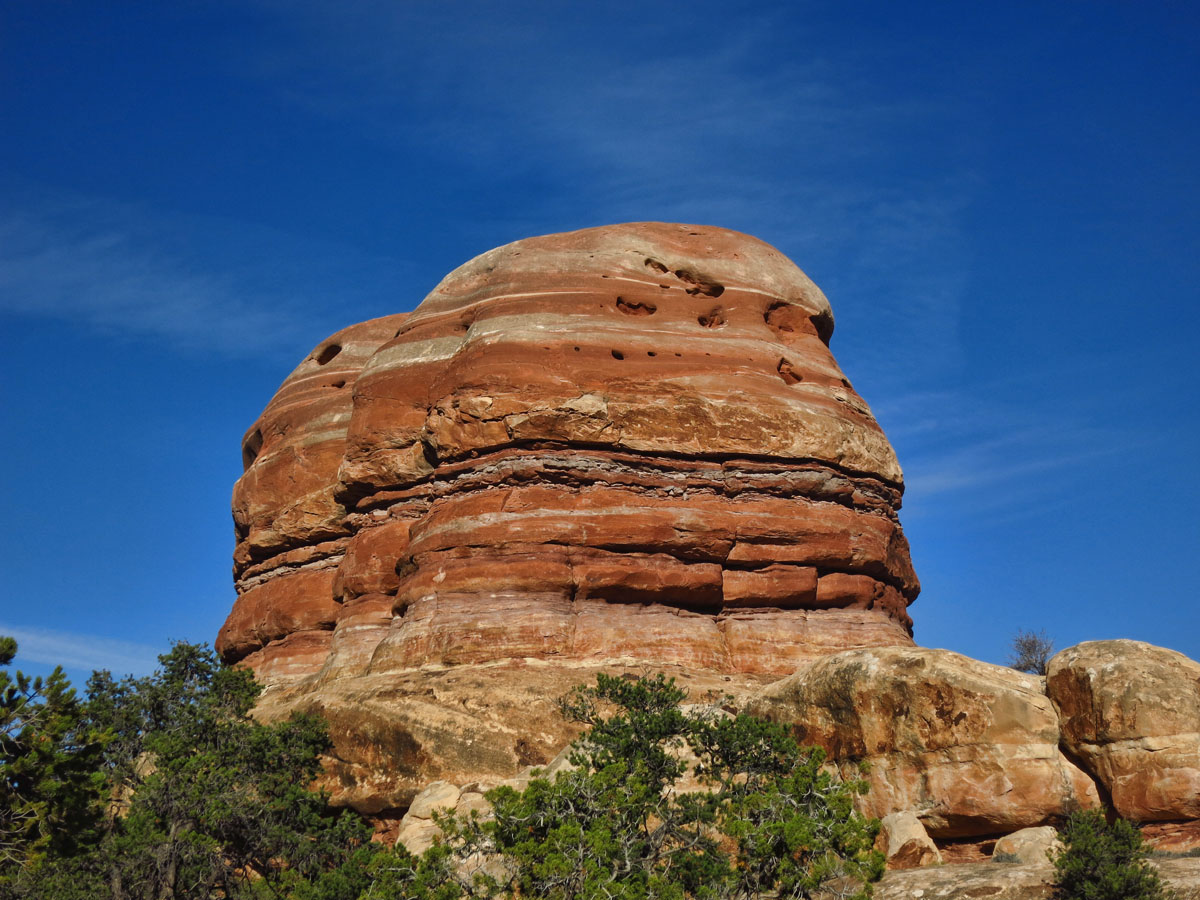 Anyone besides me (and Pam!) see a hamburger here? 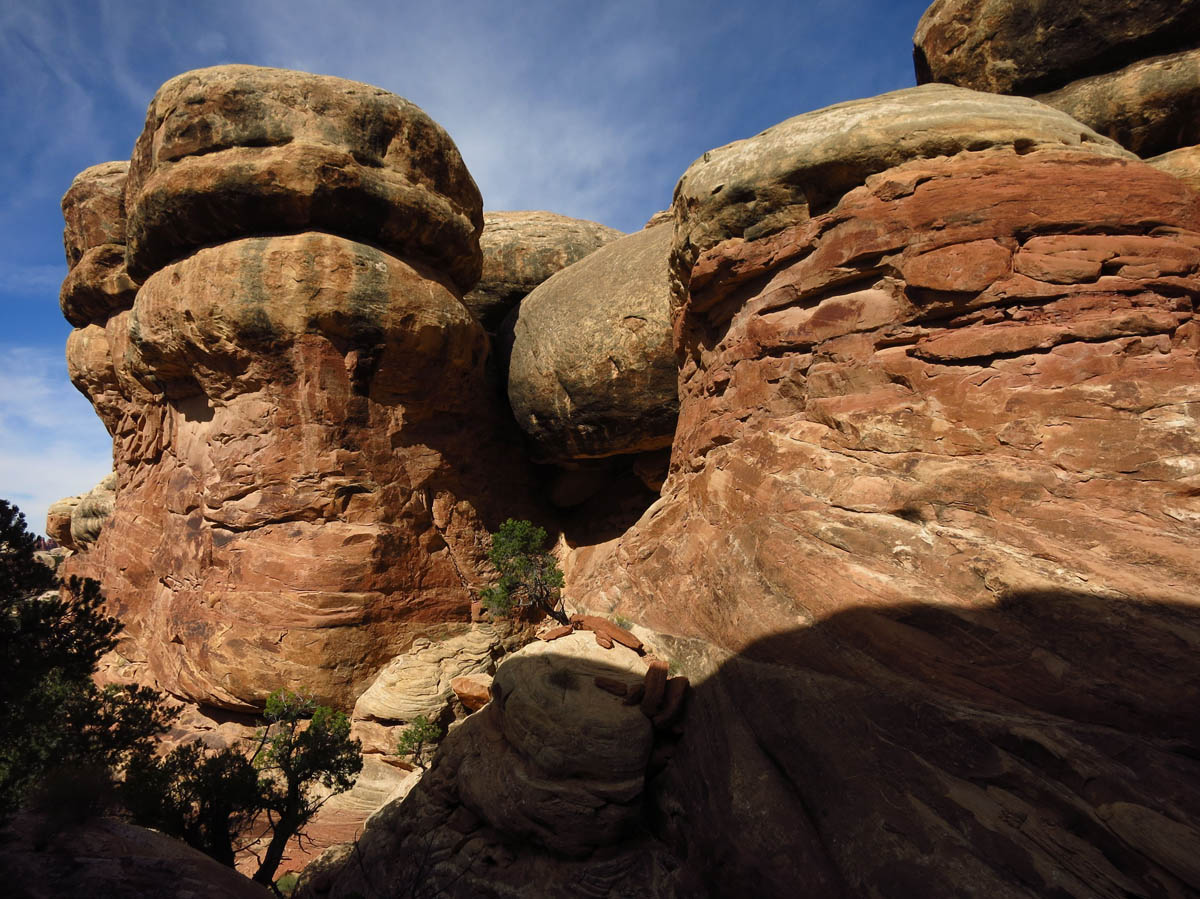 The one in the middle looks like a giant mushroom cap. 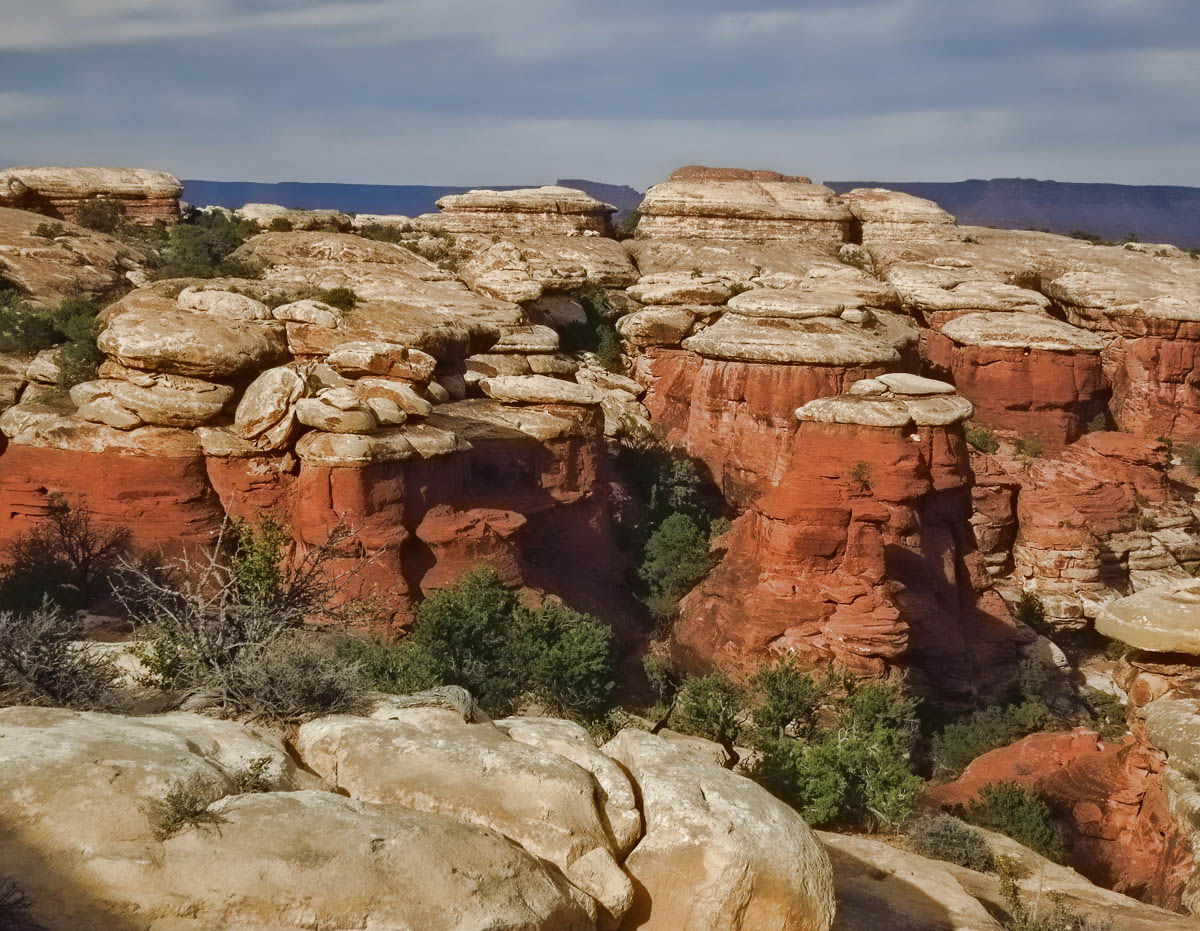 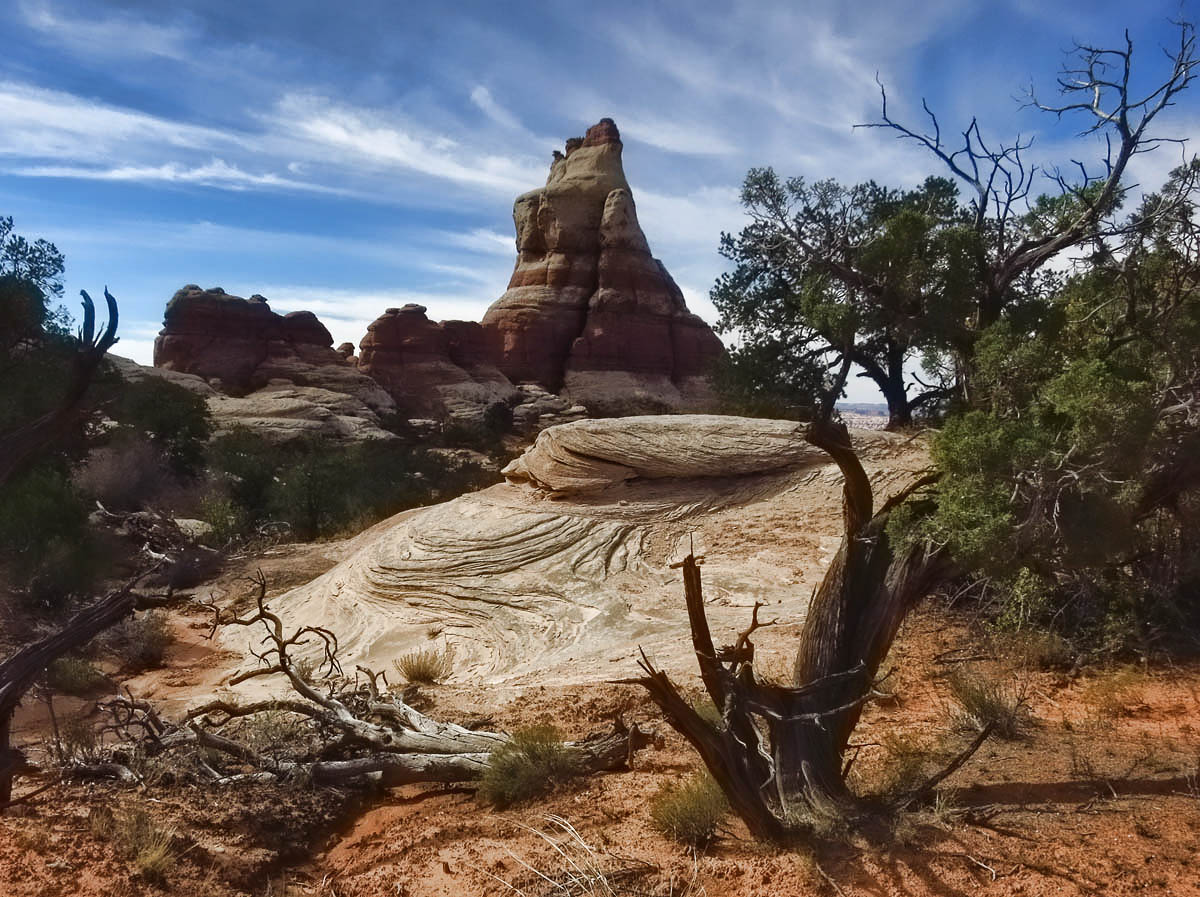 A study in “Curves”

The shapes all around me are phantasmagorical.   I see space ships.  Revolving restaurants.  Hamburgers.  Mushrooms.  Ice cream cones.   And yes, there are also plenty of phallic symbols, but we won’t go there.   But not so many “needles” in the Needles District.  In fact as a former rural dweller, they look more like “haystacks”   to me.  But I suppose the “Needles District” sounds a whole lot more compelling than the “Haystack District.” 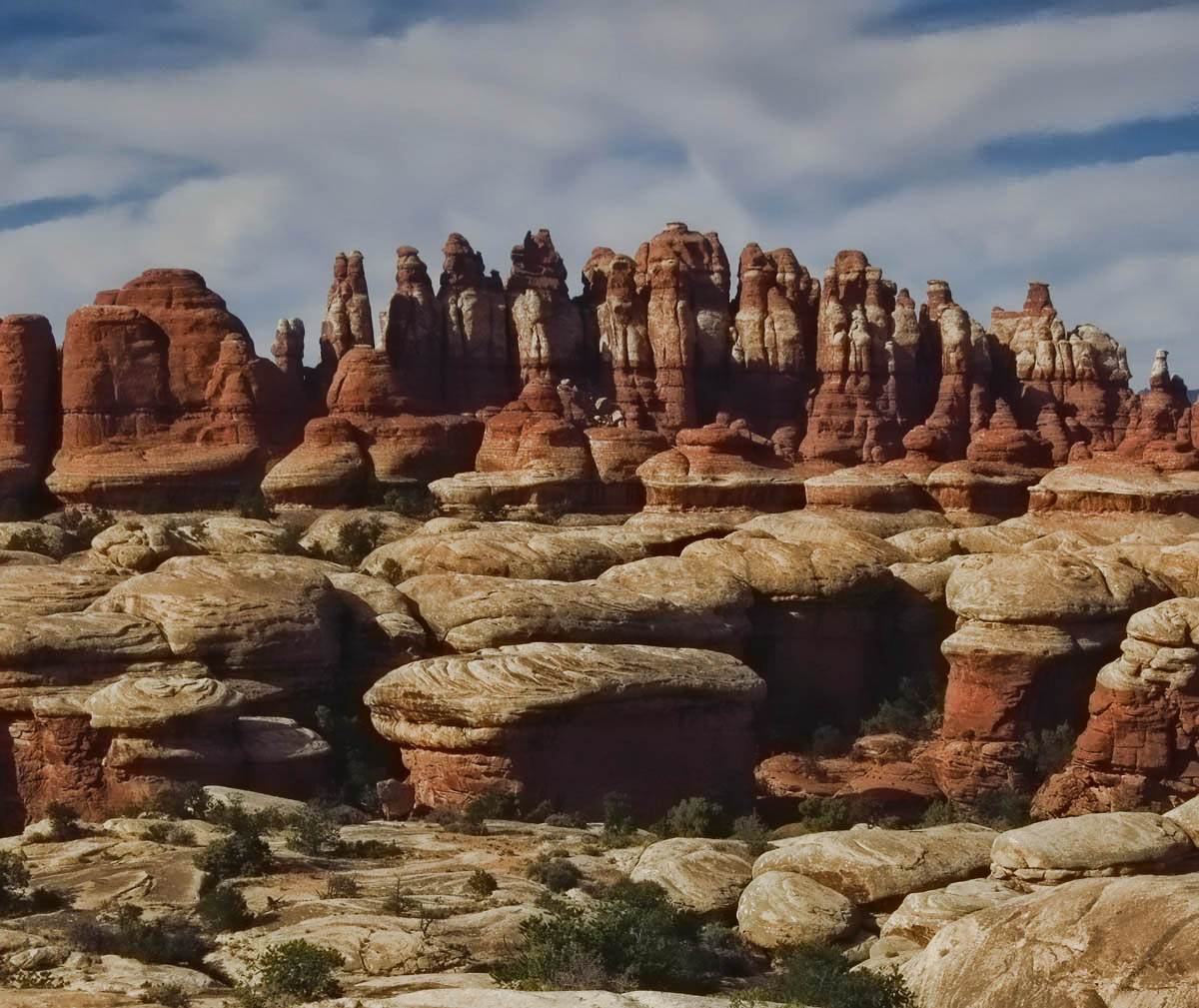 Ahhh, finally…there are the “needles!” 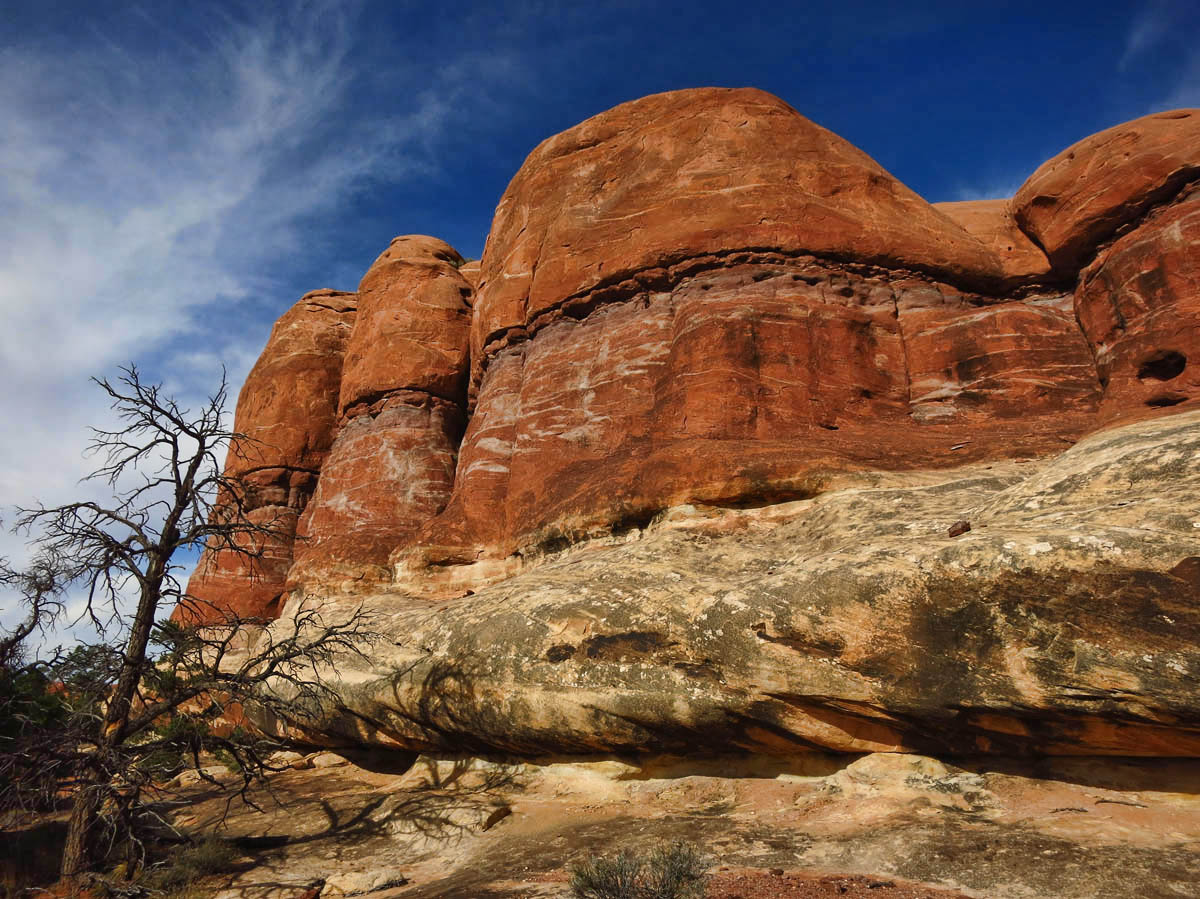 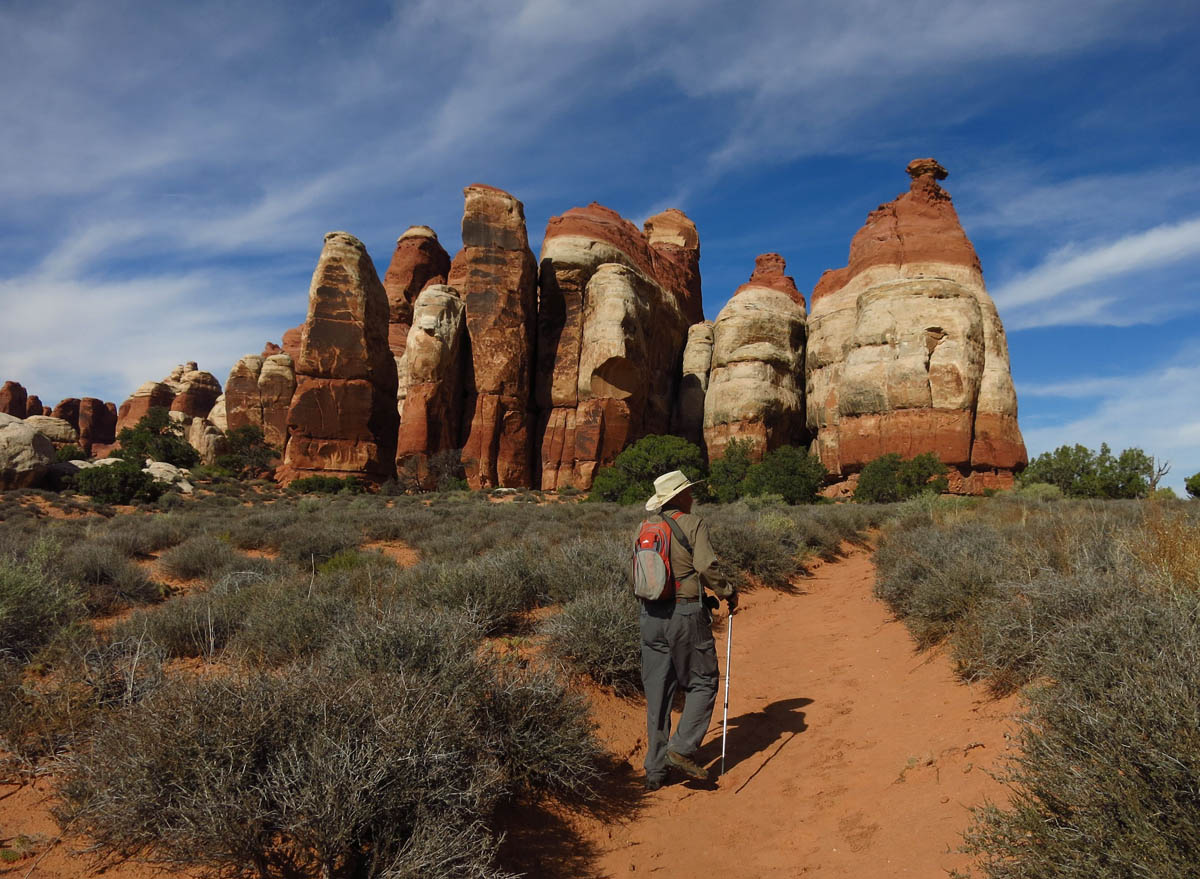 The backside of the trail gets a little monotonous compared to the rest of the hike.  One must traverse a big grassy field and hike along the 4WD road to complete the loop.  But still, as “walks in the park” go, this one is amazing even on its most arduous stretch.   The wide open grasslands offer little relief from the mounting midday heat.   Finally, a picnic table under a  lone shade tree and the opportunity to joke around with some “jeepers” about giving me a ride back brings a welcomed break. 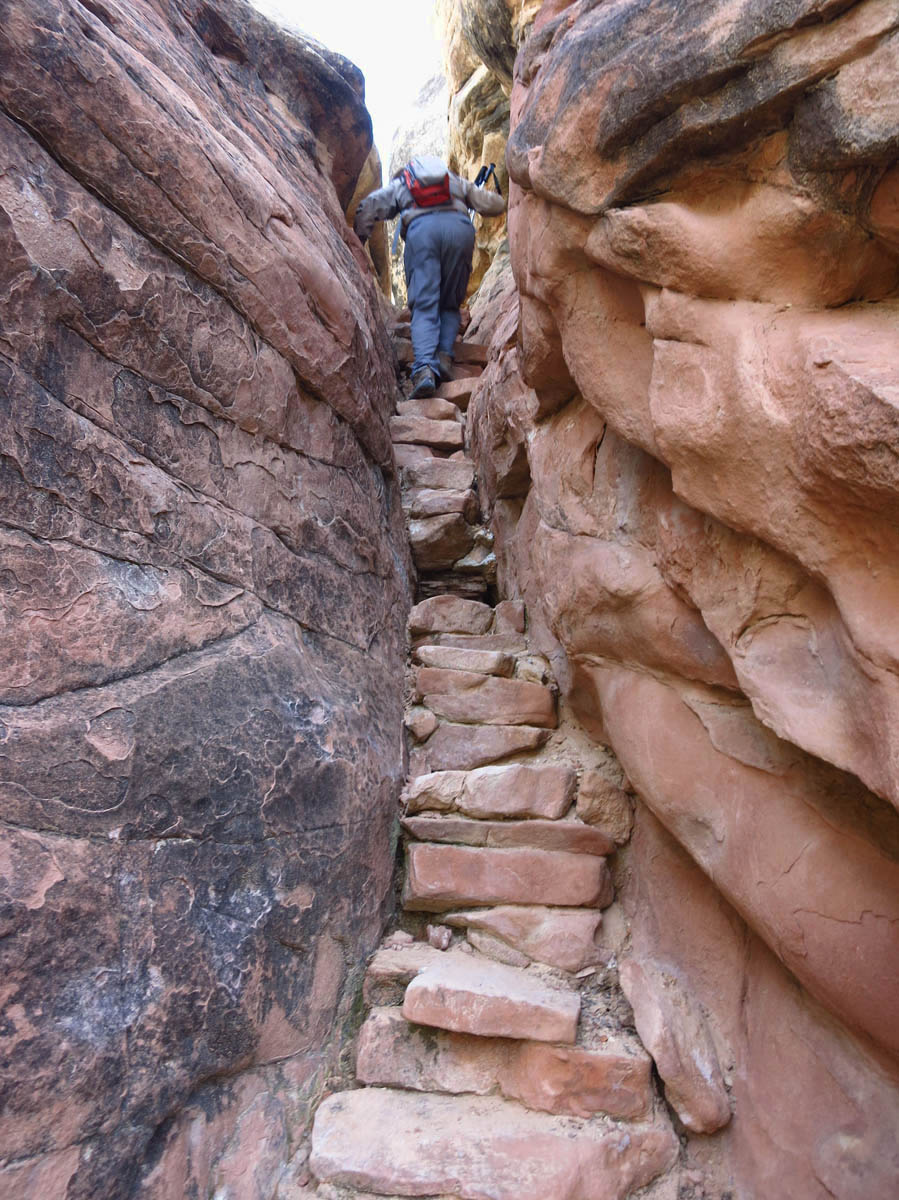 Heading up toward the Joint Trail. 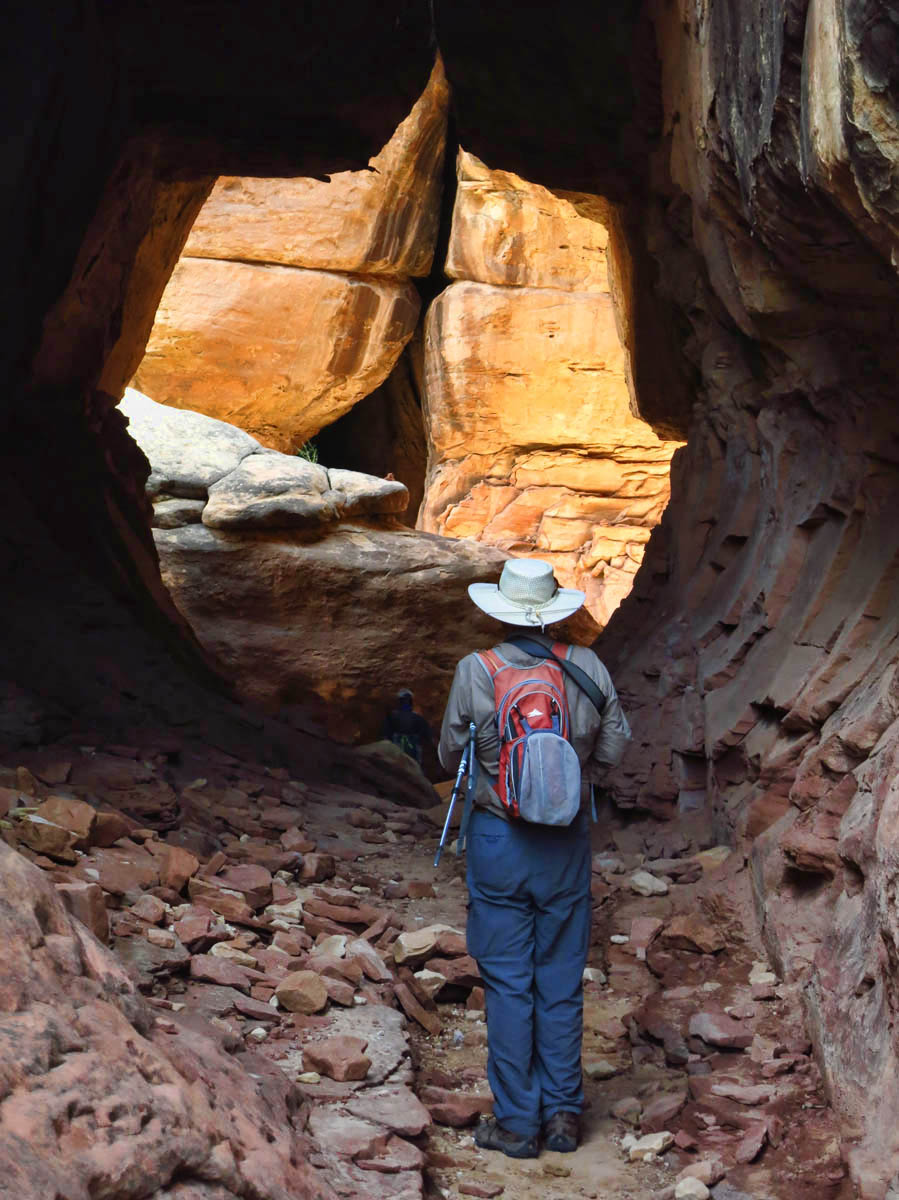 First, we enter a giant “peephole.” 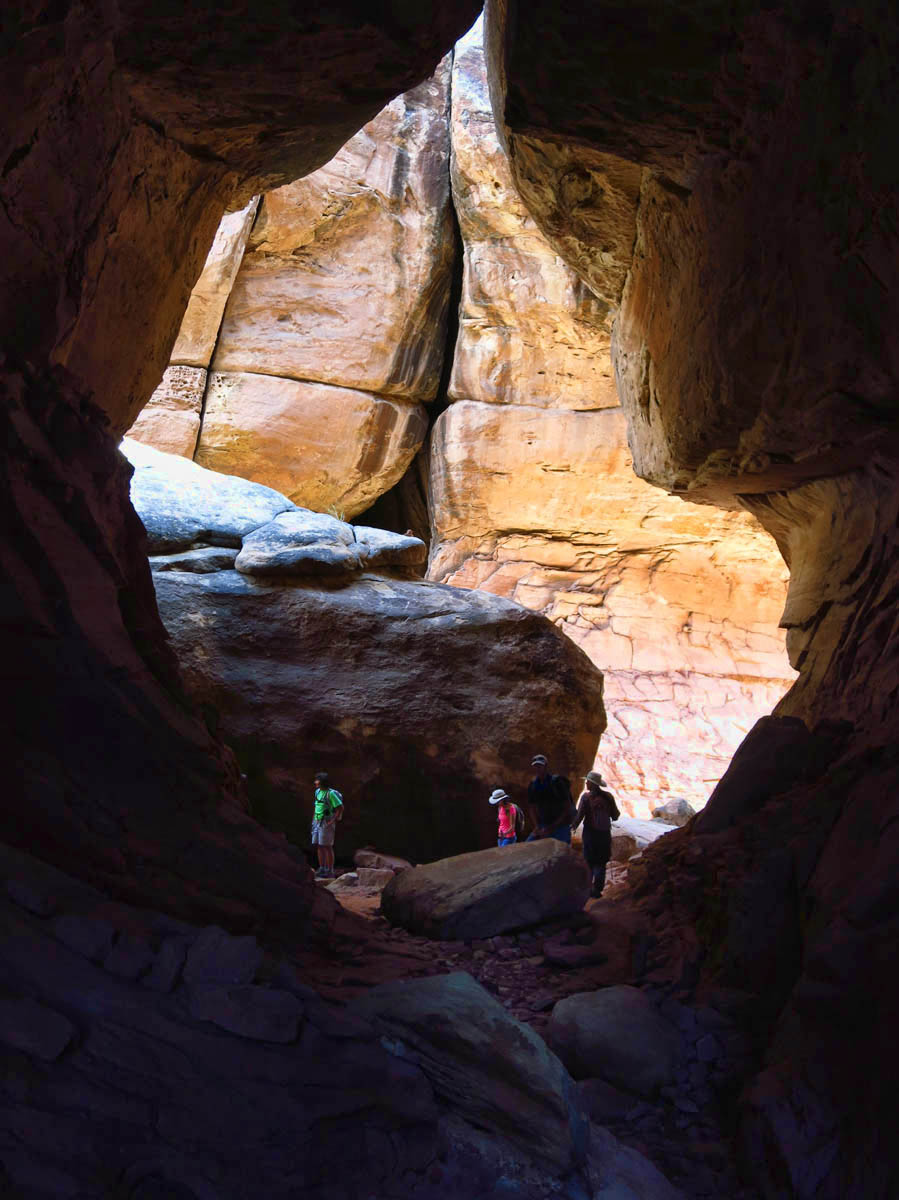 But the hard part is behind us now as we begin the short climb from the prairie through the peephole, then make a sharp left and probe the deep, long crack between two sheer walls so steep you would swear you were subterranean.   These precisely chiseled opposing walls remind me of narrow back alleyways down the dark canyon cracks of Manhattan, where the blessed sun shines for only minutes per day.  We are fortunate to have hit those few fleeting minutes as shade encroaches quickly across our threadlike path. 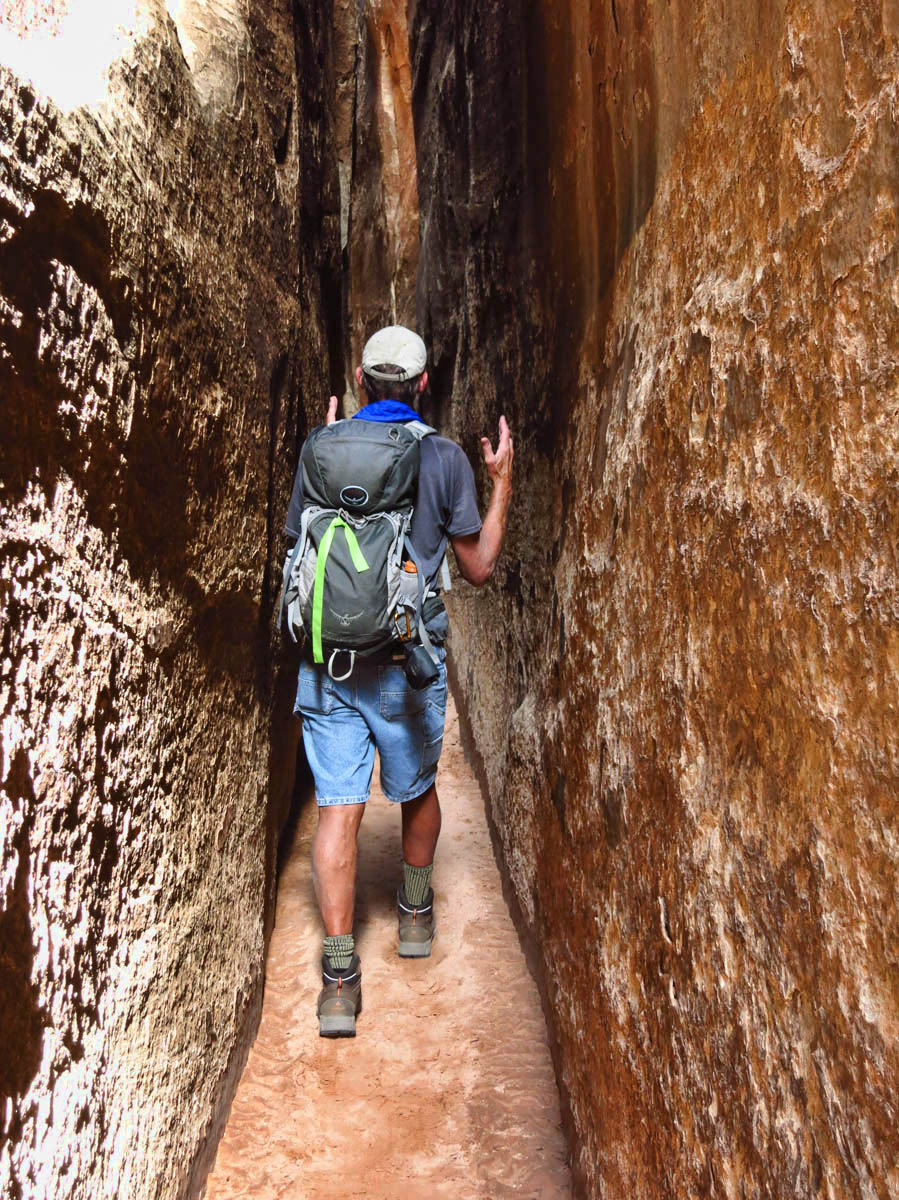 There is a sermon taking place here…”THIS is the reason why we are here. THIS is why we choose to escape the madness of cubicles and treadmills and safety nets and travel around in tuna cans…” 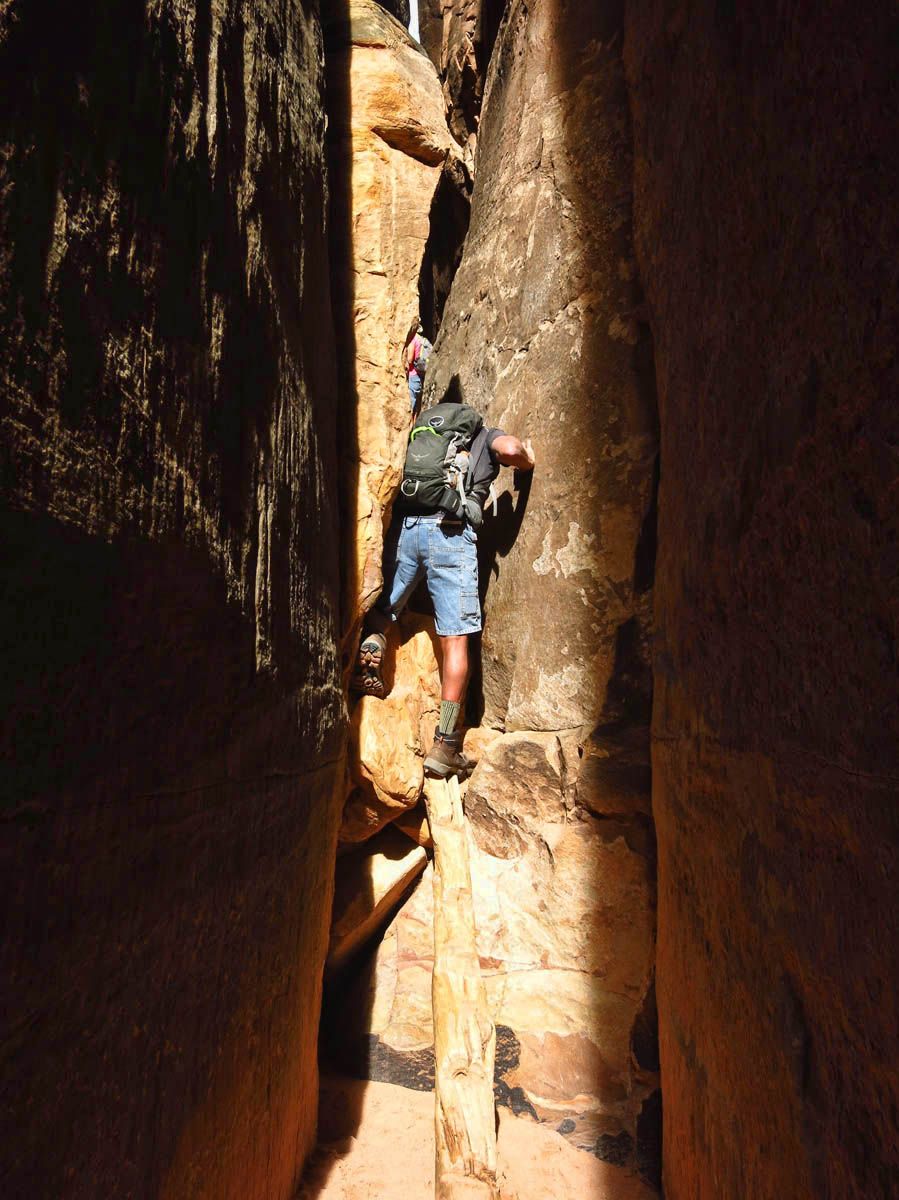 Exiting the Joint made easier via the aid of a log-ladder. 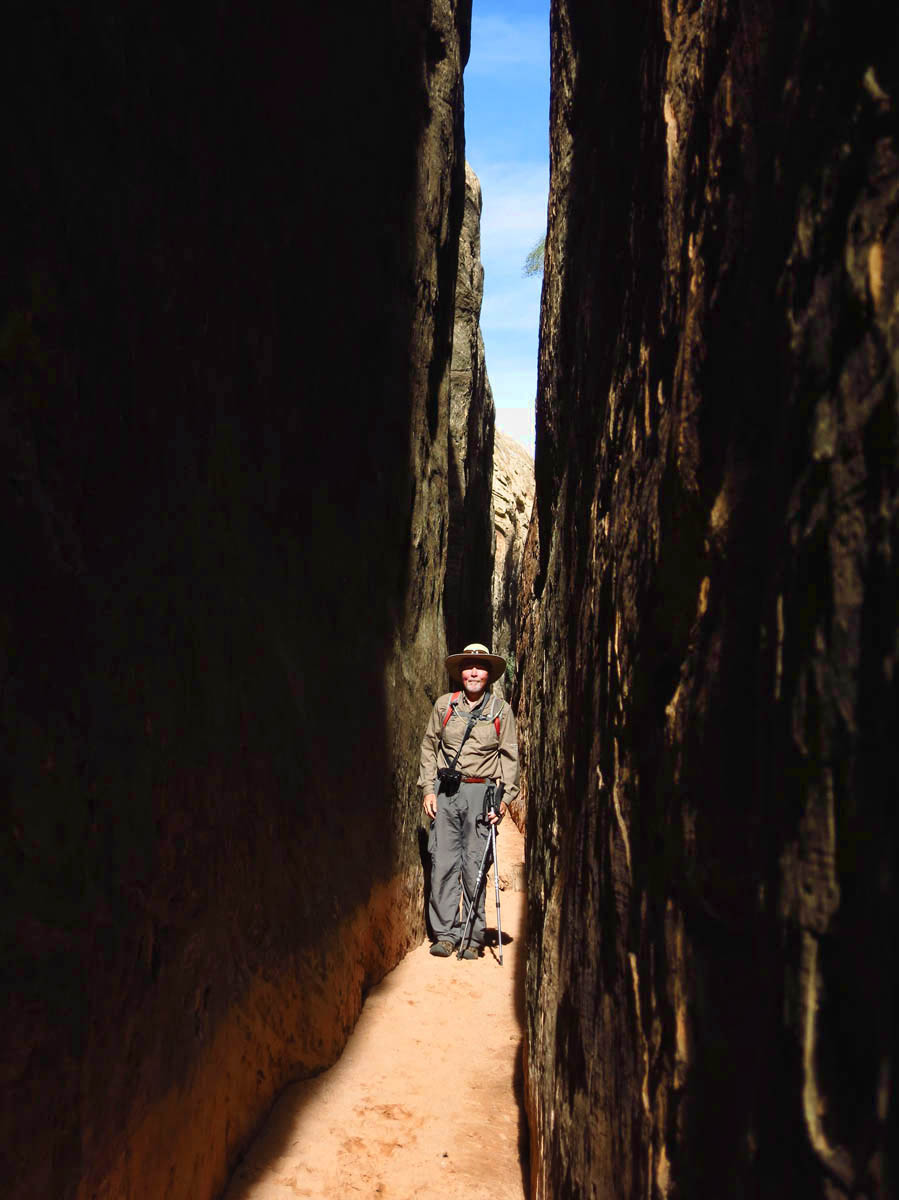 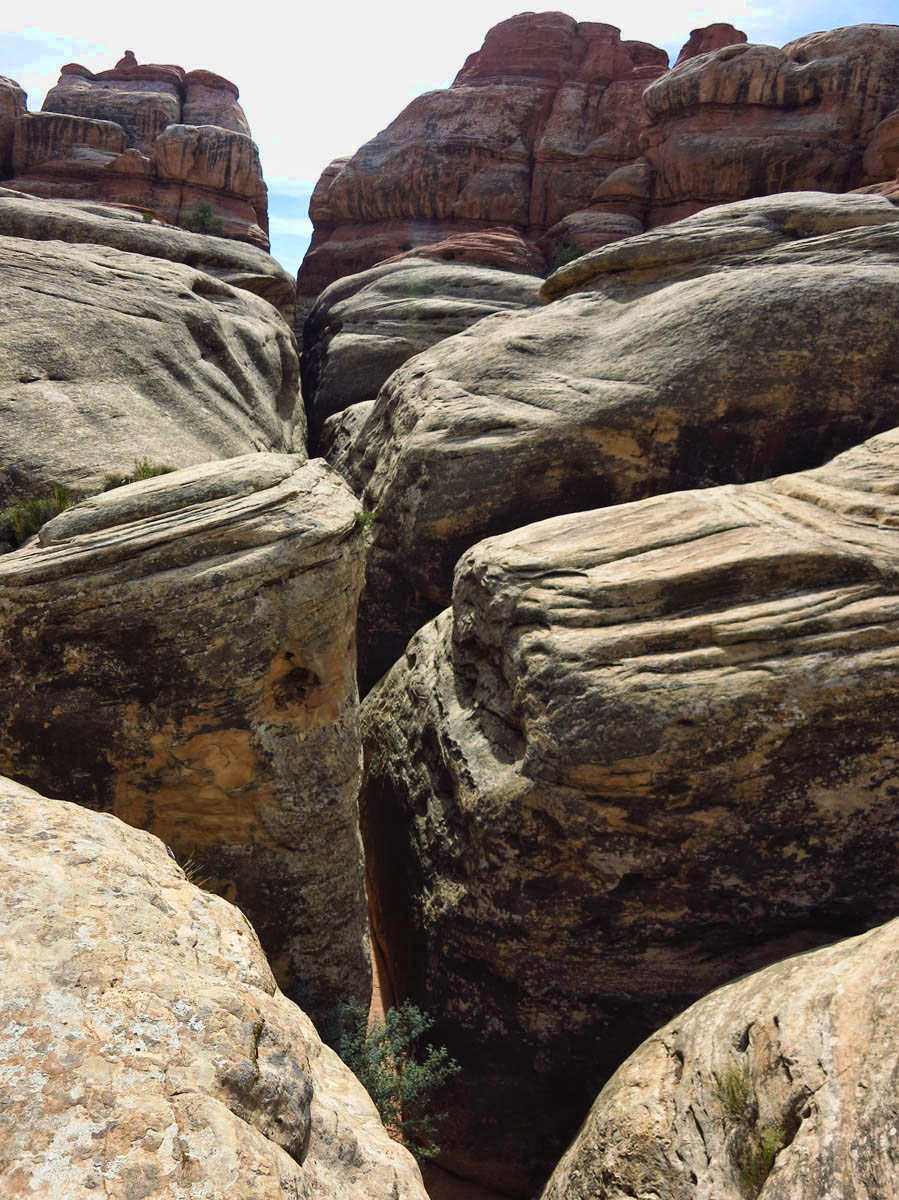 View of “The Joint” from up above. Not as straight and narrow as it looks from down below.

As disparate as the group is about departure times and temperatures, the same goes for hiking pace.   I tend to be a slow and steady hiker, taking time to rest, take photos, and stop just short of the point of perspiration, whereas others in the group like to keep moving.    So by the time we reach the Chesler Park Overlook “balloon string” again at the close of the loop, I am starting to feel a bit weary from the pace.  I suspect at this point, some just want to get it over with, as the unseasonable heat has taken its toll.

But I don’t regret choosing the eleven mile hike.  If I were choosing all over again as a “Needlepoint Sampler,” Chesler Park Loop would win again.   And I can’t imagine a better group of friends I would rather have with which to hike on in to sixty-one!

29 thoughts on “A “Needlework Sampler” for My Birthday”