In addition to my Moon Guide, which is helpful for budget options, I always consult Tripadvisor.com for their “Top 10 things to do in…” whenever I am destination planning.  Yes, those are always the most crowded activities, but just like our National Park system, there is a reason they got to be that way.  So I figure that makes them worthy of exploration.

The Number 1 activity for La Paz is a boat trip out to Espíritu Santos, (translates to “Holy Spirit,) a UNESCO-protected island in the Gulf of California Biosphere Reserve.  Jacque Cousteu called this neighboring island surrounded by idyllic bays, “the world’s aquarium.”   Purportedly, 39% of all the world’s fish species can be found in these protected waters. 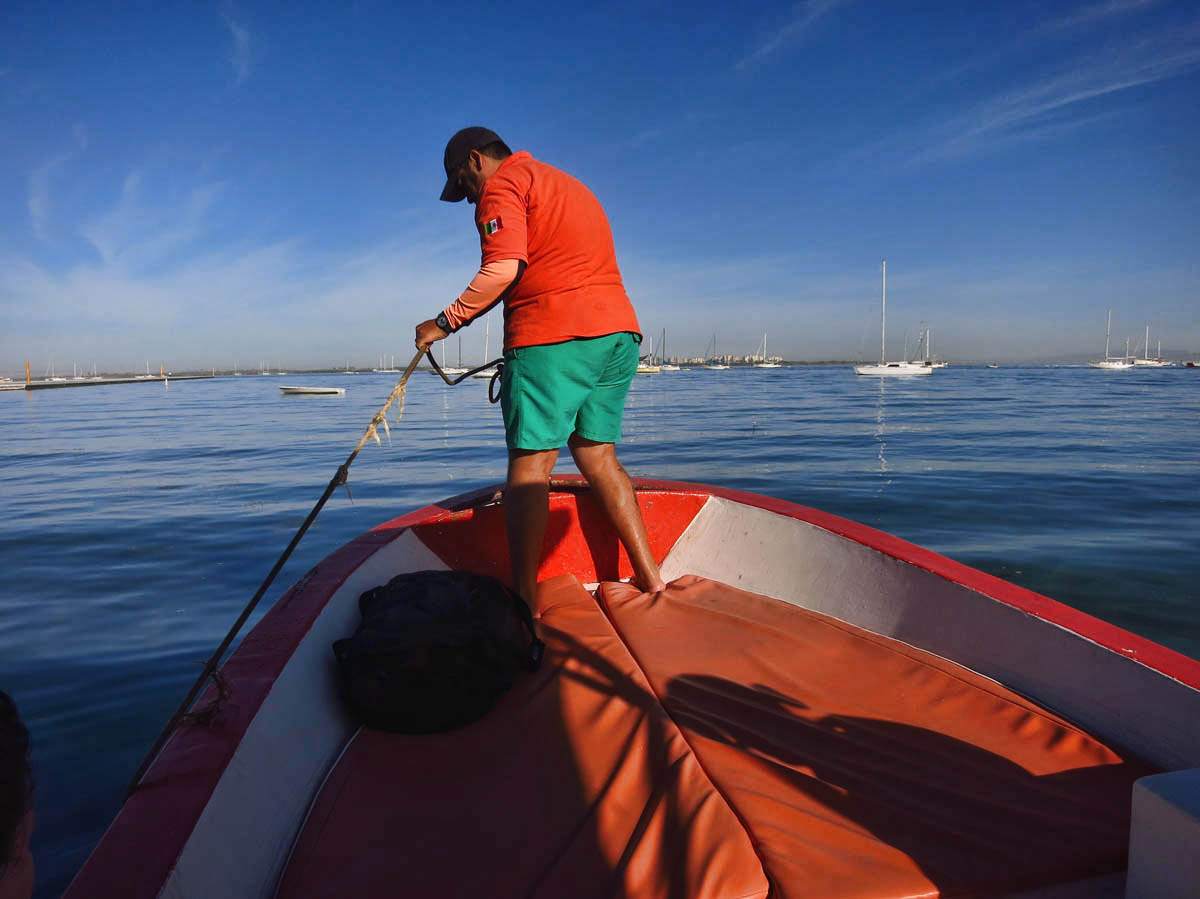 Just a block down the street from my hotel is a small shop along the waterfront labeled “Espíritu Baja Tours.”  I make this my first stop on my way to explore the downtown area.  They have a tour leaving tomorrow to Isla Espíritu Santo, and there are only seven passengers on a boat that holds 14. 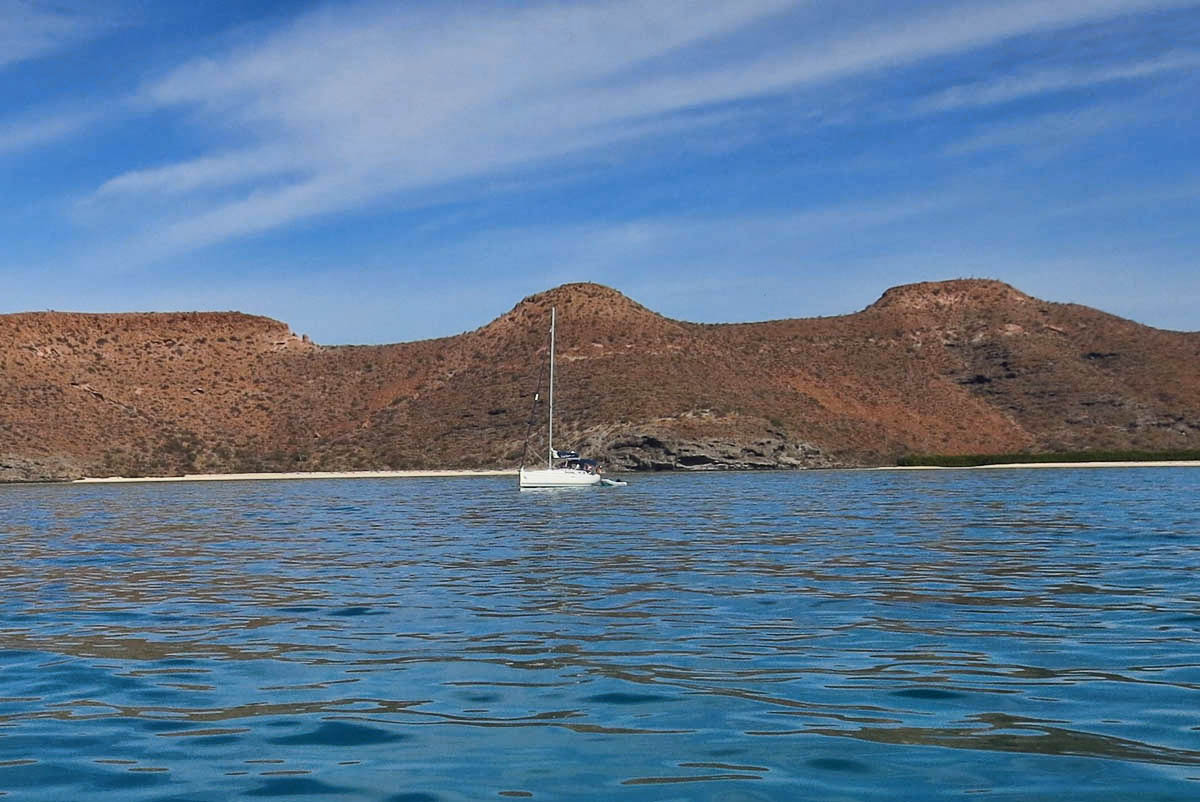 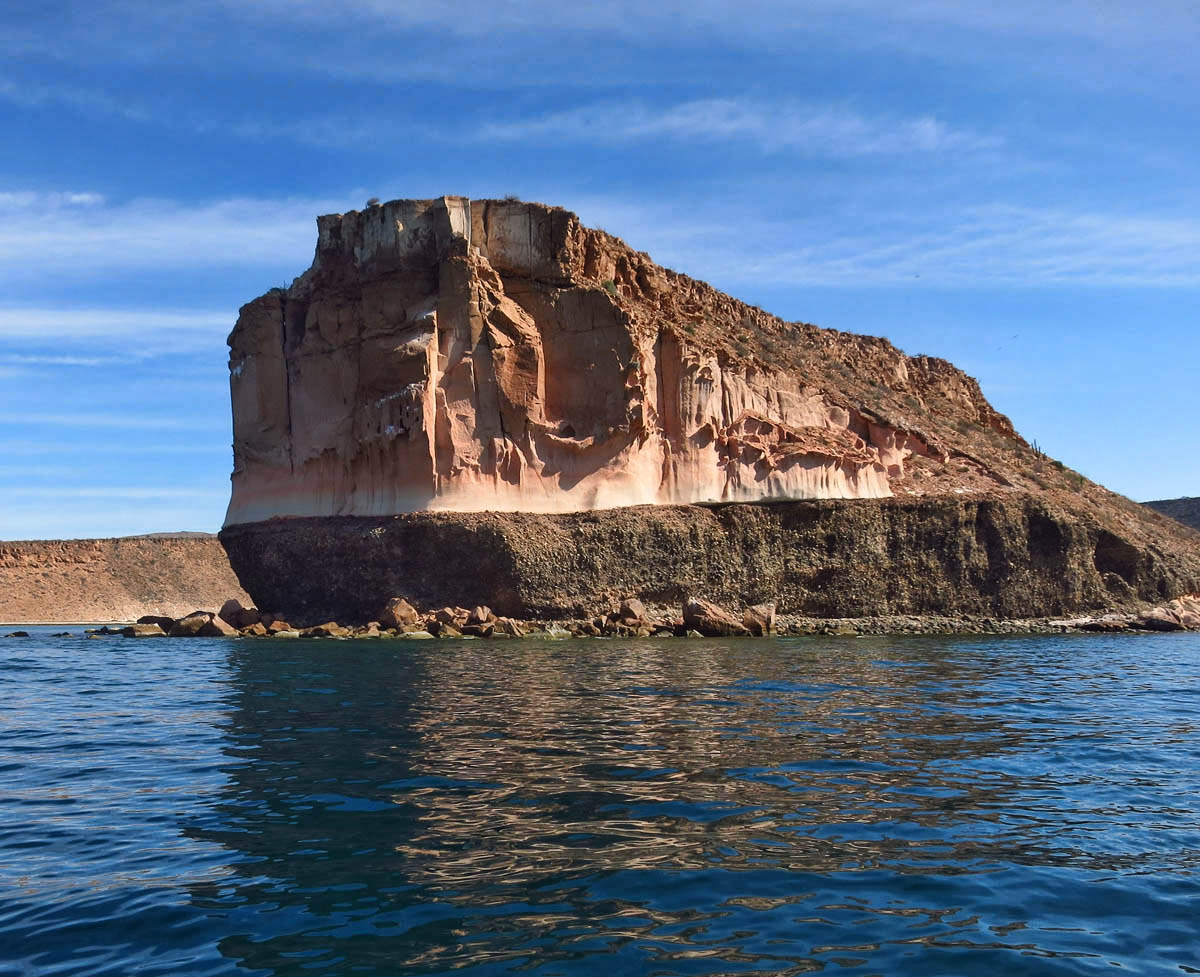 Typically, the tours to Espíritu Santo leave at 10:00am, but I am told the tour tomorrow leaves at 8:00am, because they have to pick up some people from the cruise ship pier.   This is a combination of news that doesn’t set well for a few reasons;  a really early wake-up call, a chilly boat ride, and having cruiseship people on the tour!  But Raul tells me it is the best possible day, as it is calm, with the wind expected to build over the following days.  He assures me not to worry, that the 8am departure will mean a little more time on the beach. 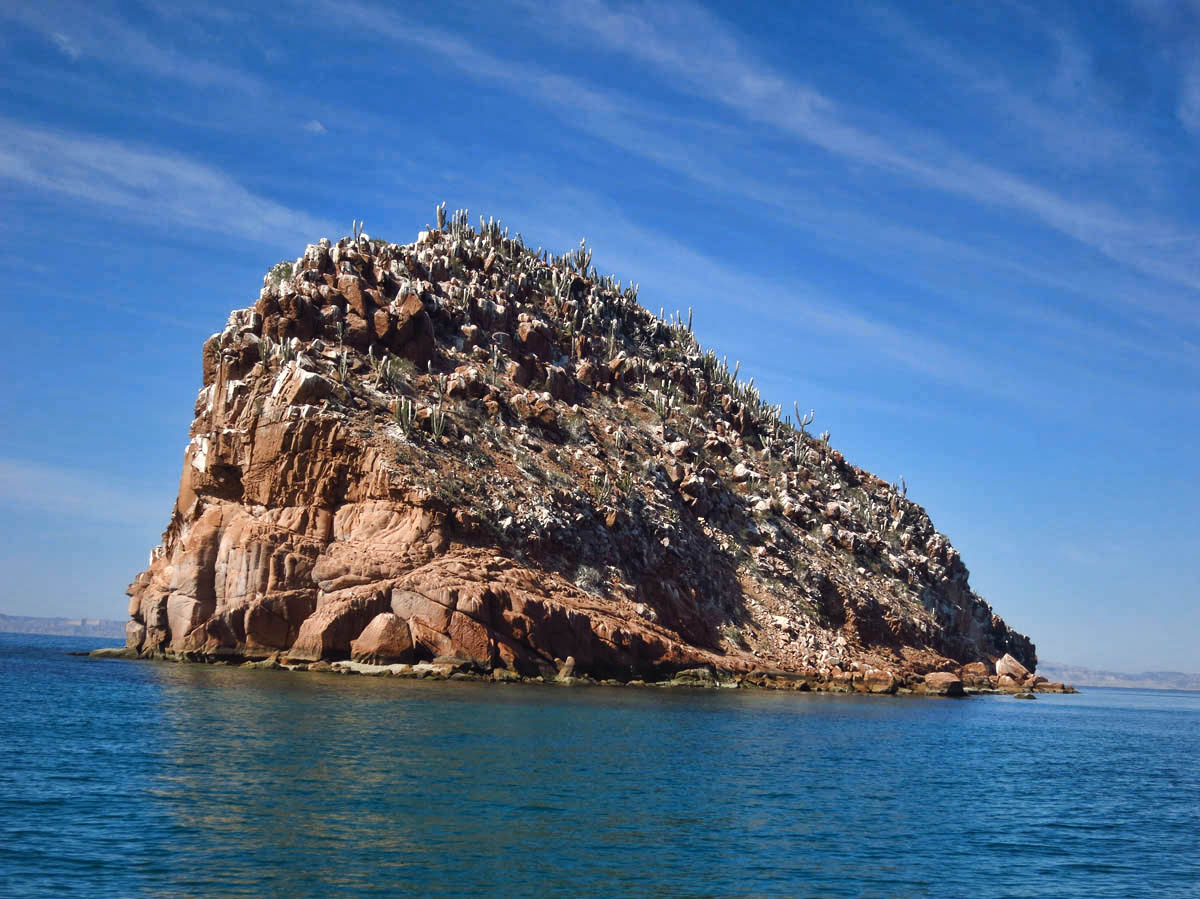 Ever see snow-capped cactus? Me neither… 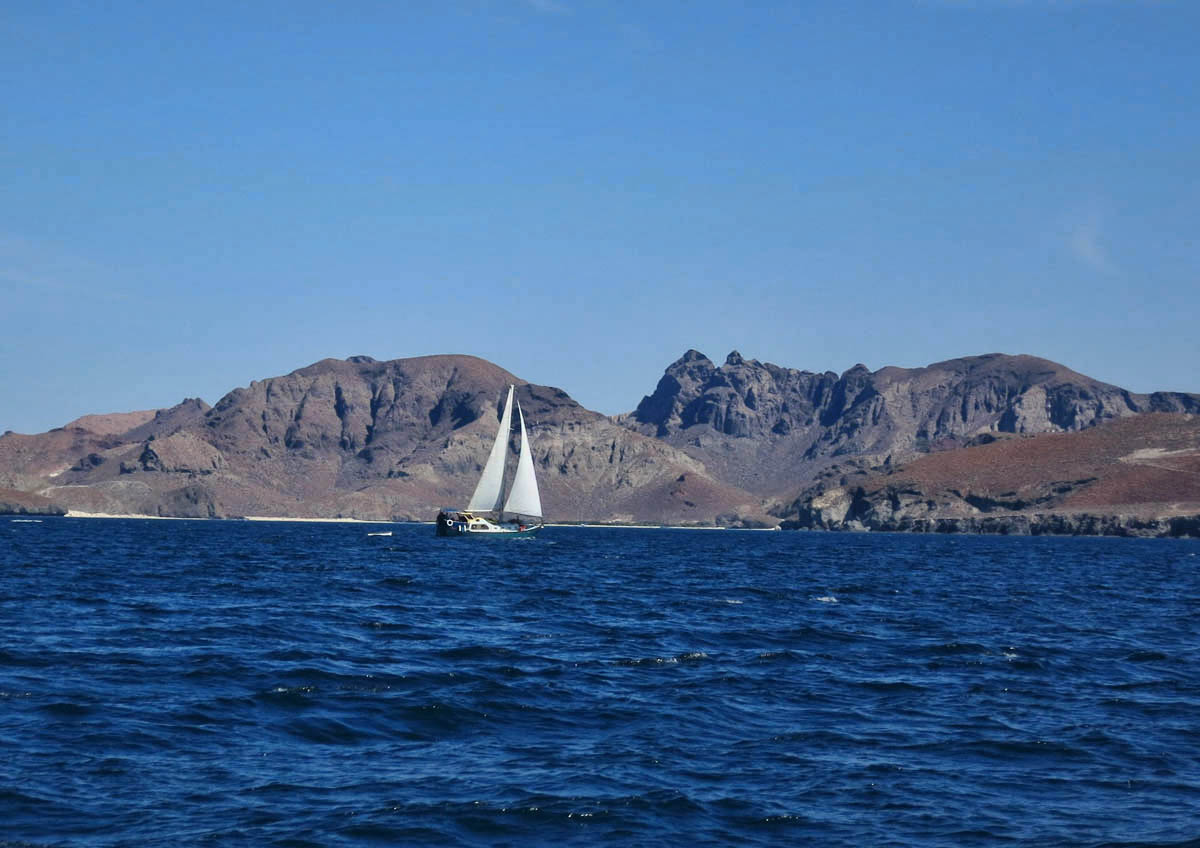 As Jimmy Buffett would sing, “So many nights I just dream of the ocean God, I wish I was sailing again.”

It is a glorious morning when I leave to meet the tour, heading out early enough to stop for a Latte and a hot cinnamon roll from “Cinnarolls” to go.    Already, the sun is warming things up, and the sea beyond the malecon appears flat calm.   We spend half an hour getting everyone fitted for wetsuit and snorkel gear, then the group walks across the street to board the boat. 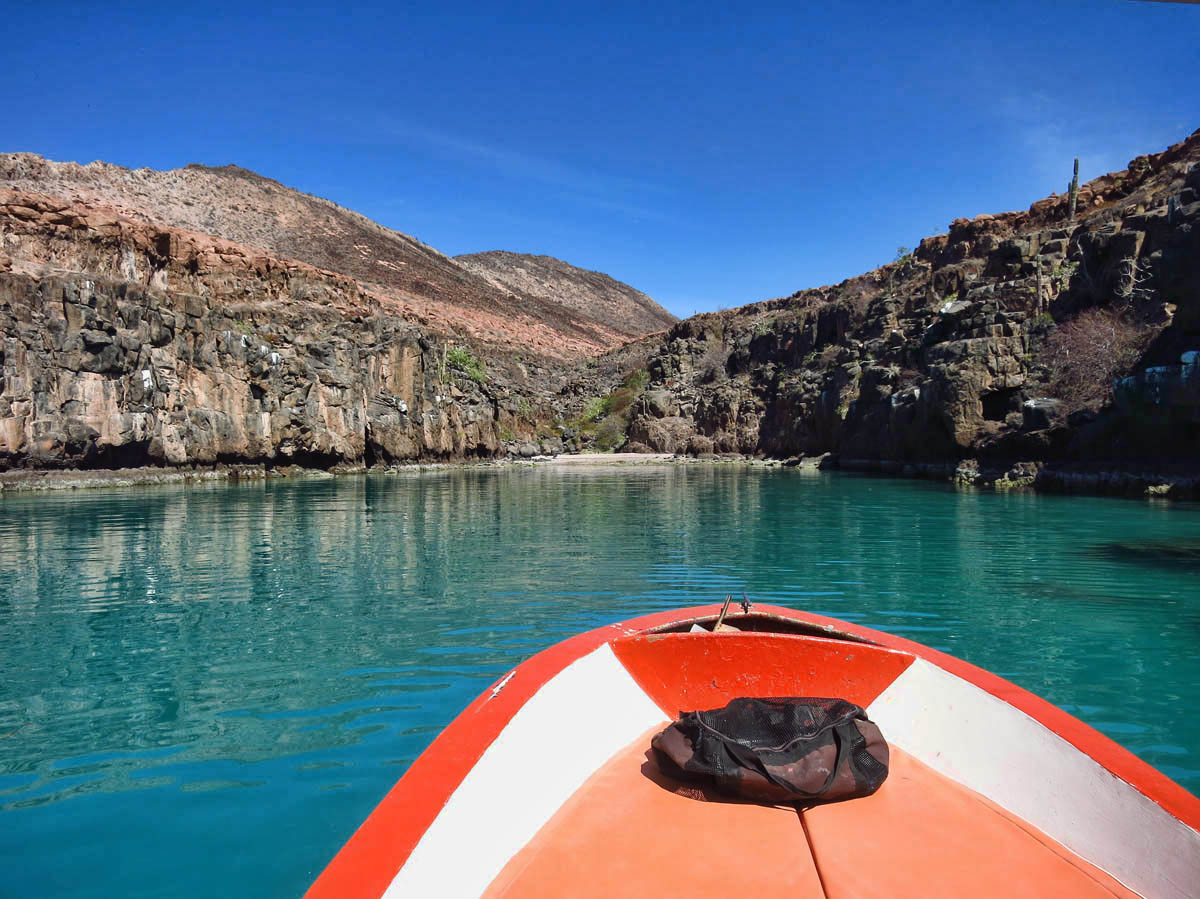 Raul shows us a cove where trees grow with roots a half mile long to reach a water source. 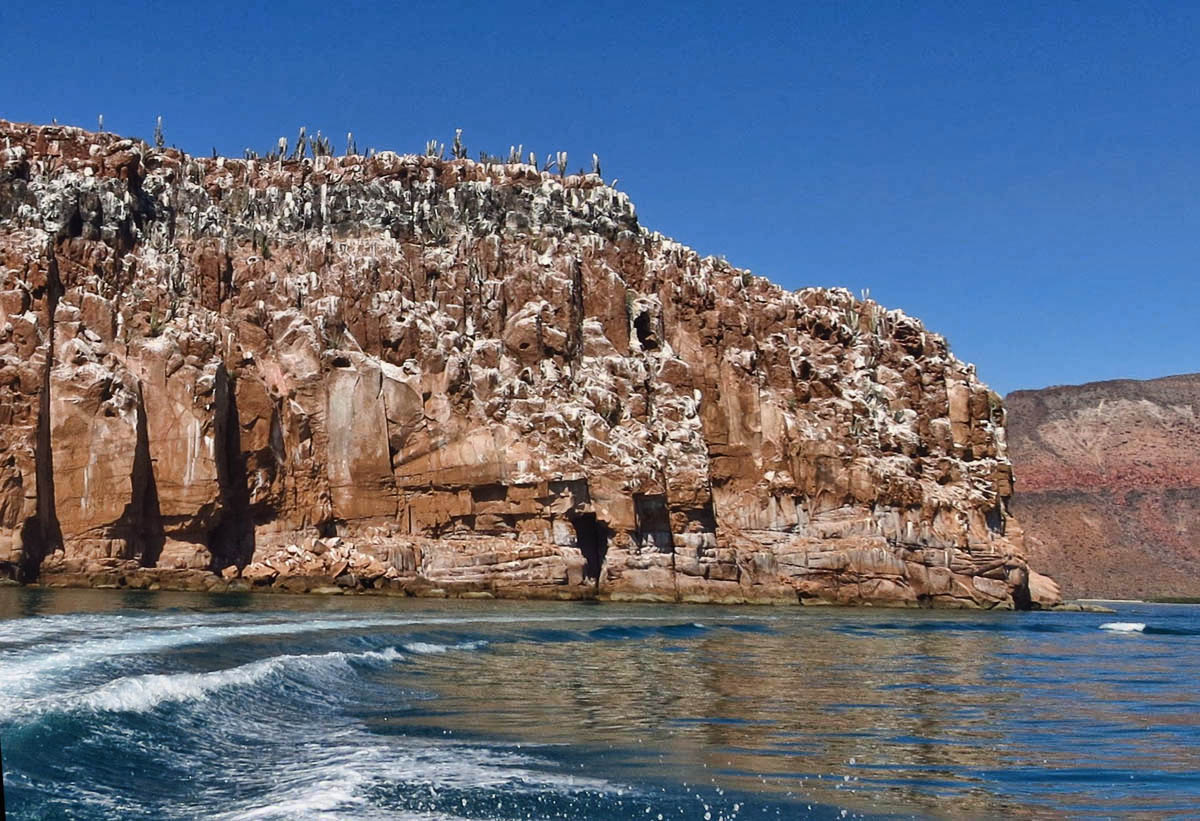 We motor over to the cruise ship pier to wait for the rendezvous with the cruise customers, when we hear behind us the familiar sound of a gush of air thrusting through the water.  It’s two humpback whales!    We chase them around and watch as the humps on their backs rhythmically rise and dip back down beneath the surface.  Finally, Raul deems the additional cruise ship people a “no show,” so our small group of five will have the boat all to ourselves.  We motor on… 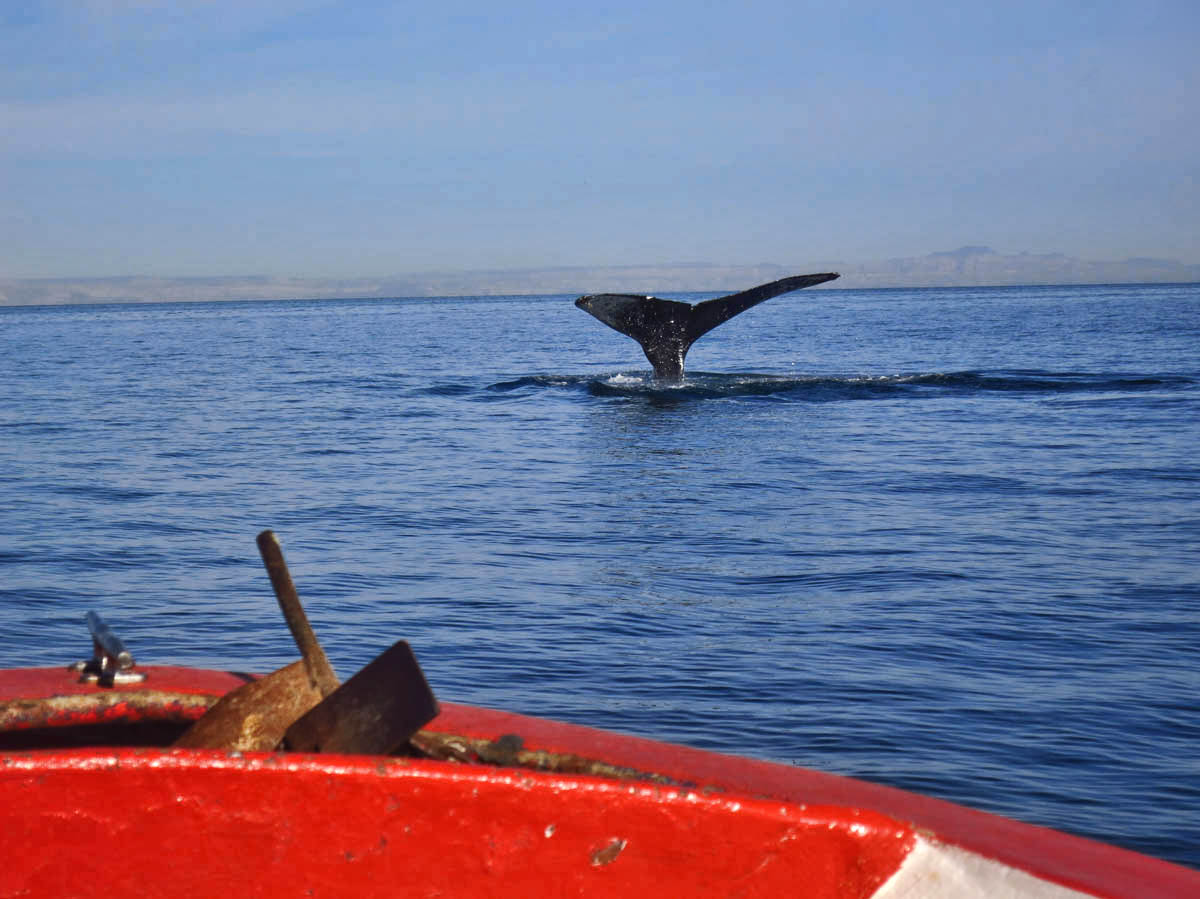 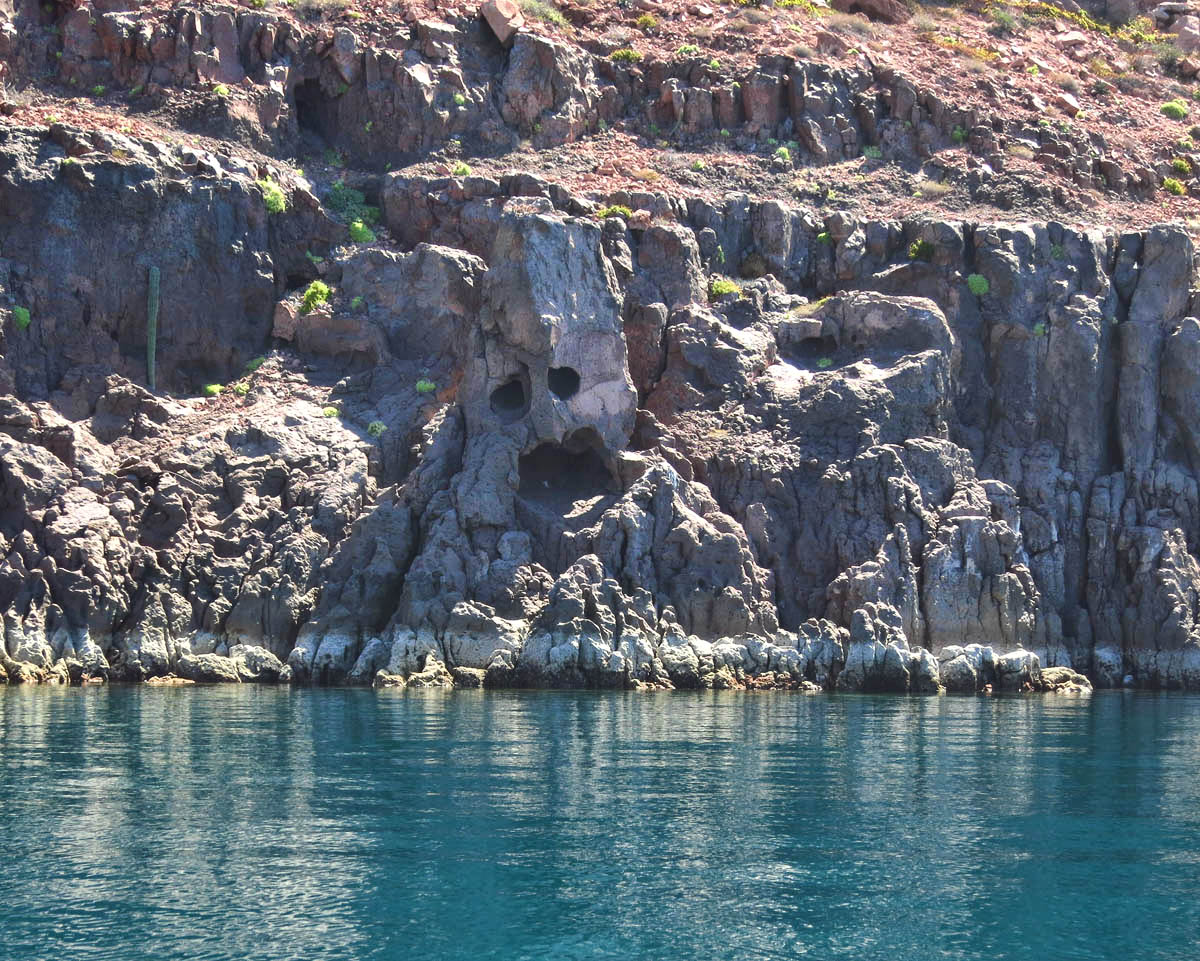 I am gob-smacked at the scenery as we motor toward the island.  It’s an hour ride through a culmination of everything I love.   Towering red rocked cliffs are separated from the aquamarine water by a thin ribbon of white sand.   We pass idyllic calm bays ringed with pristine sugar sand beaches, dotted with the occasional sailboat or kayaks.  The water is so clear and calm, I can see the sea floor over the rail of the boat.  “Holy Spirit” YESSS!  This is my heaven! 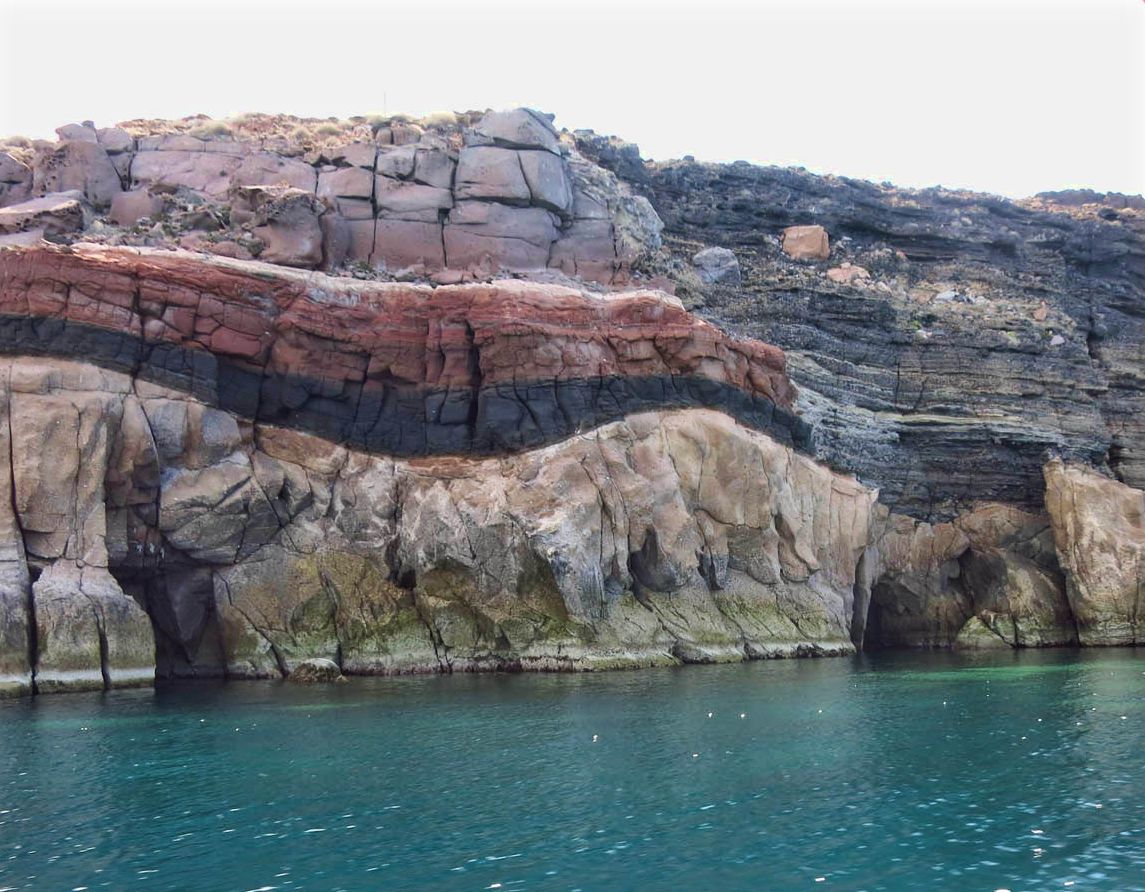 That dark shadow to the left is an arch. 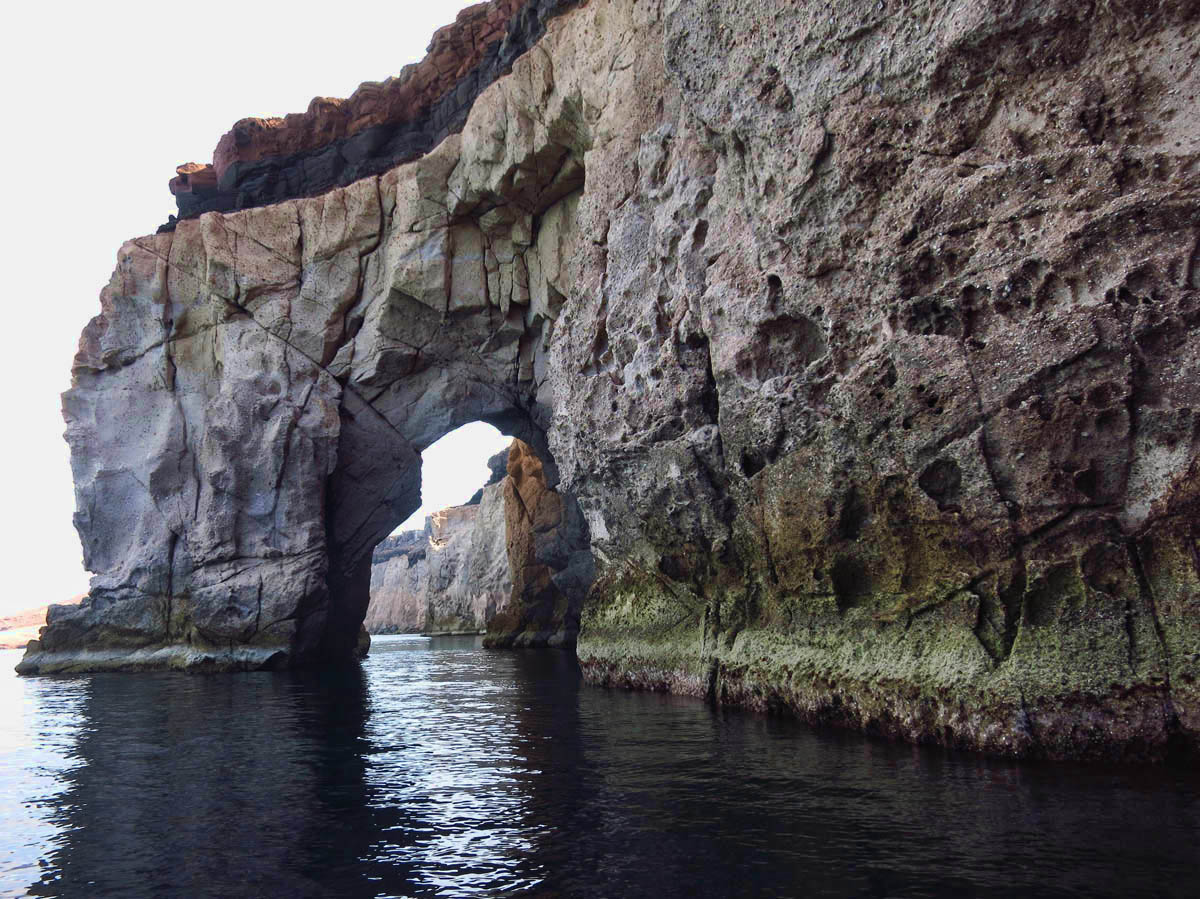 Yep, we are motoring through it! 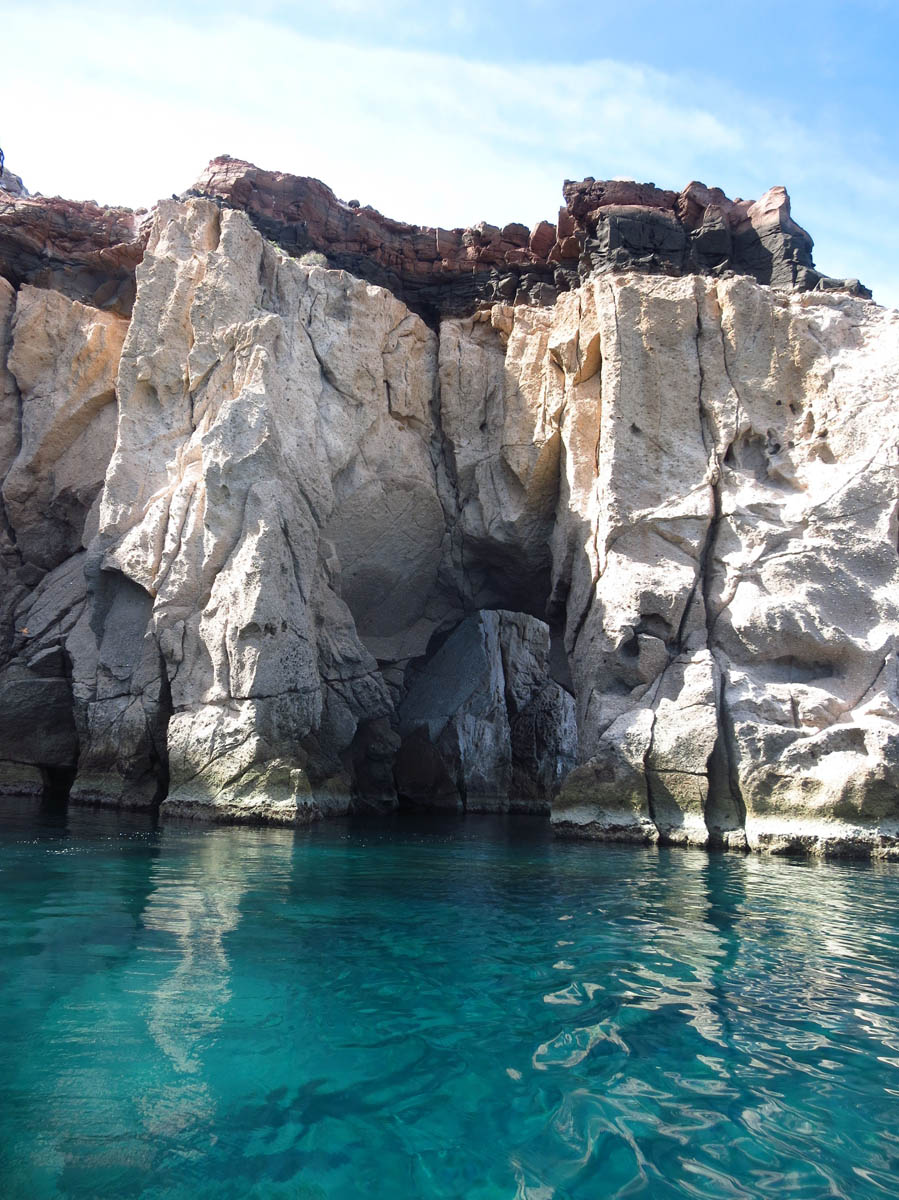 Unlike the boat tour in Cabo, our trip has both a driver and a guide, and Raul speaks fluent English.  No canned jokes, just a palpable love for the aquatic wonderland.  The boat slows as we pass several rookeries where birds are nesting.  But I seem to be the only one in the boat who is more intrigued by the geological formations of the rocks.  I take more photos of rocks than birds. Given my poor attempt at bird photos, you will see why.  😉 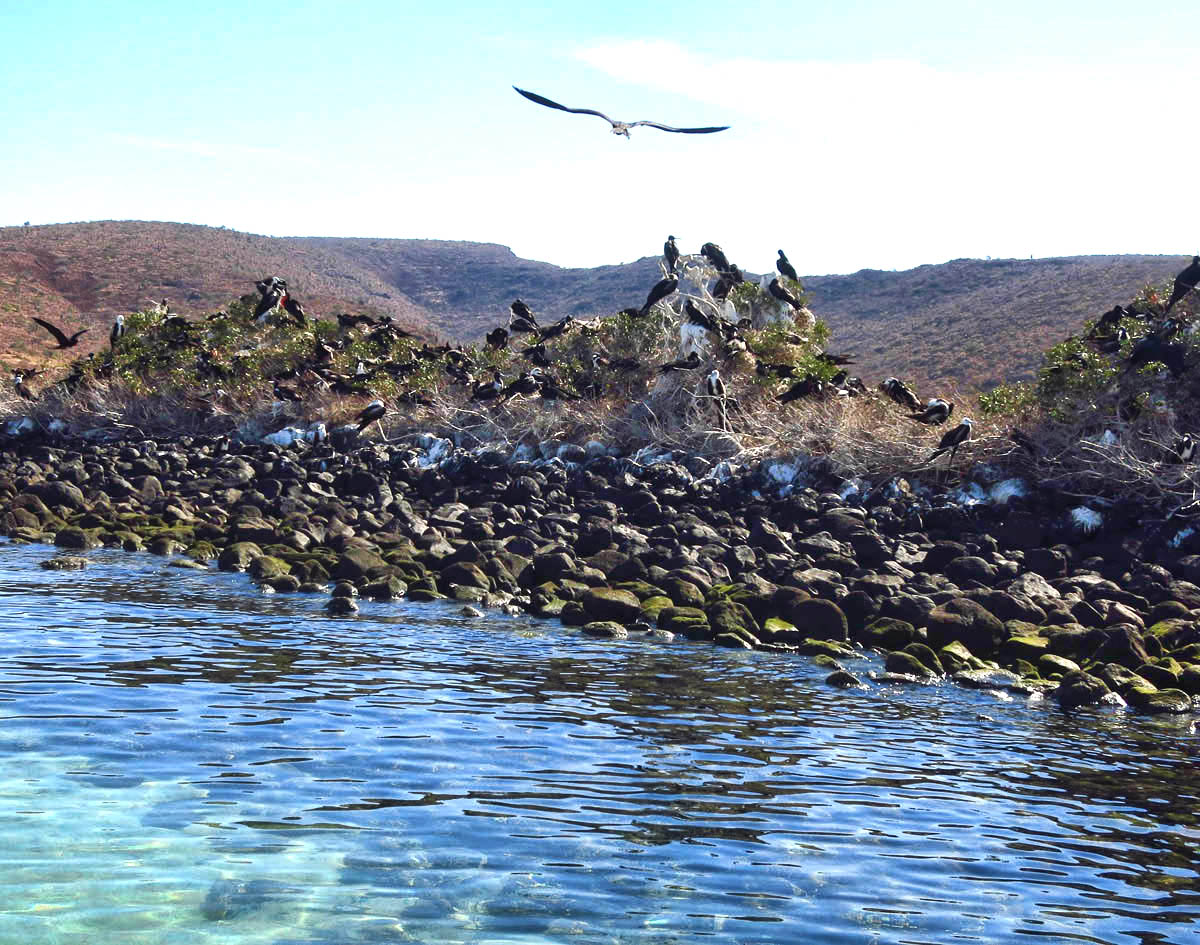 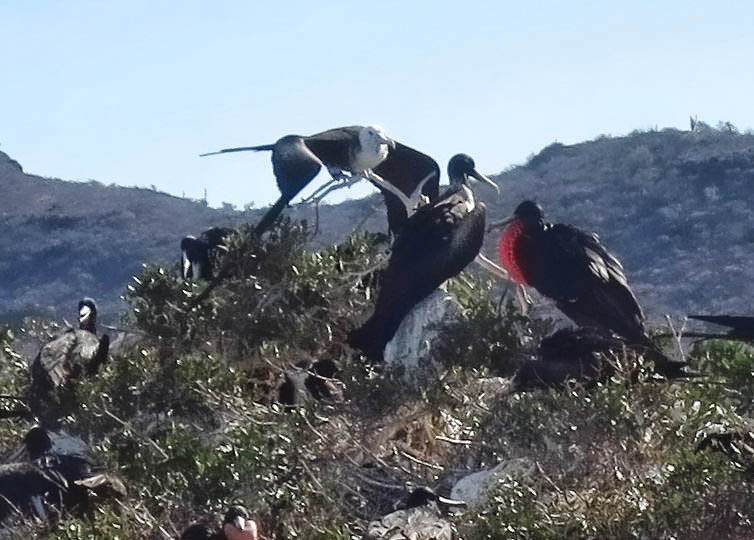 The male’s chest turns red when he is courting. 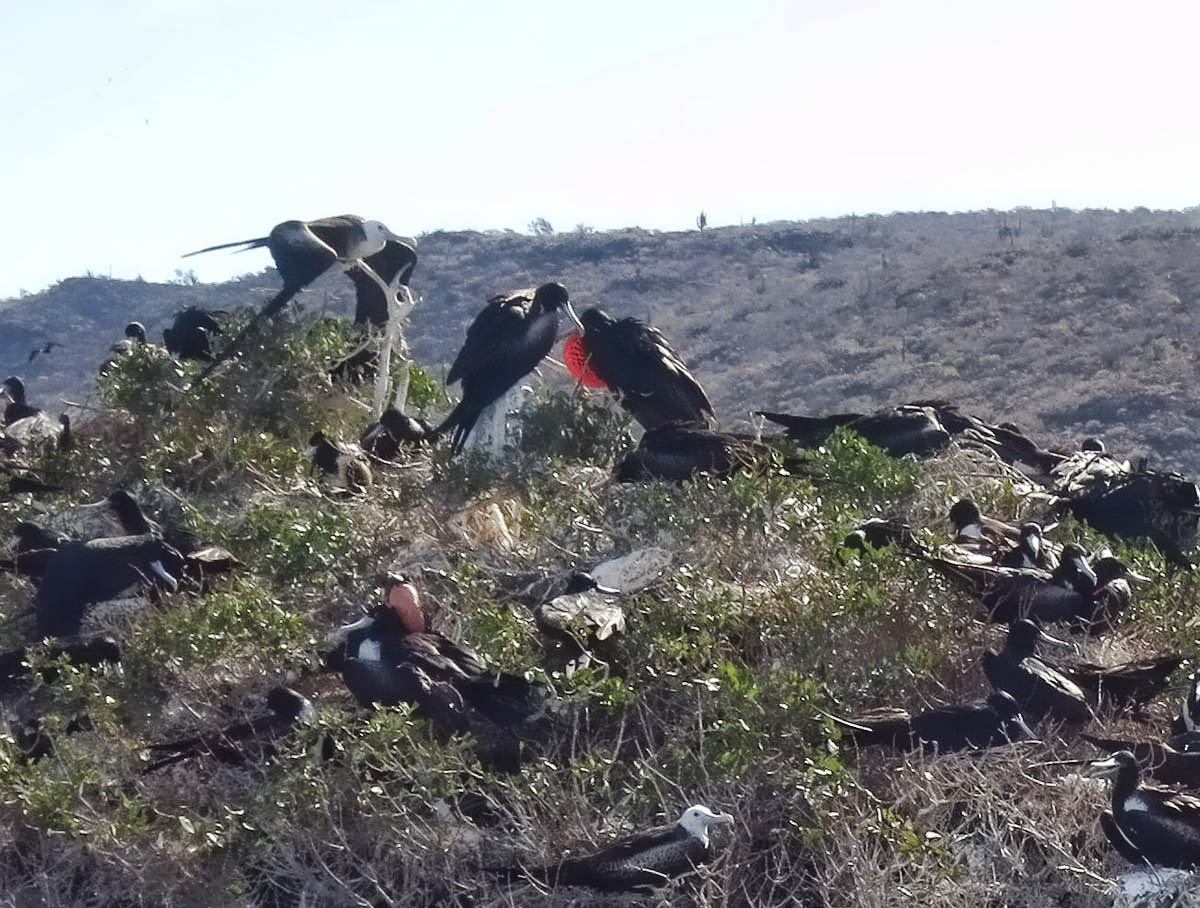 Our ultimate destination is Los Islotes, or “the islets,” a couple of tiny islands off the point of Espiritu Santo.  Arches and caves create an interesting shoreline, and Raul tells us there is a healthy reef below.  But we are here to see the residents…a colony of three hundred sea lions. 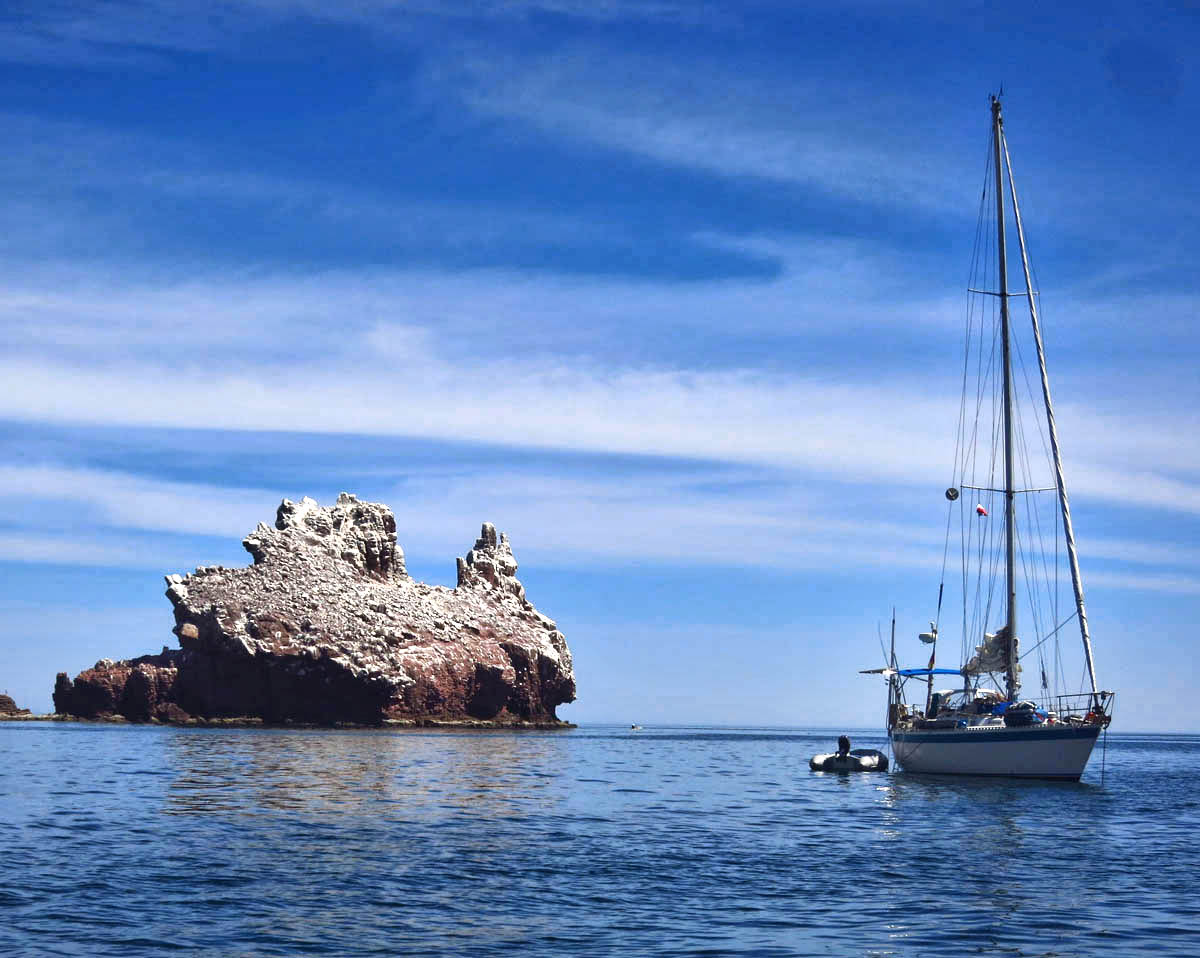 One of Los Islotes, or “the islets.” 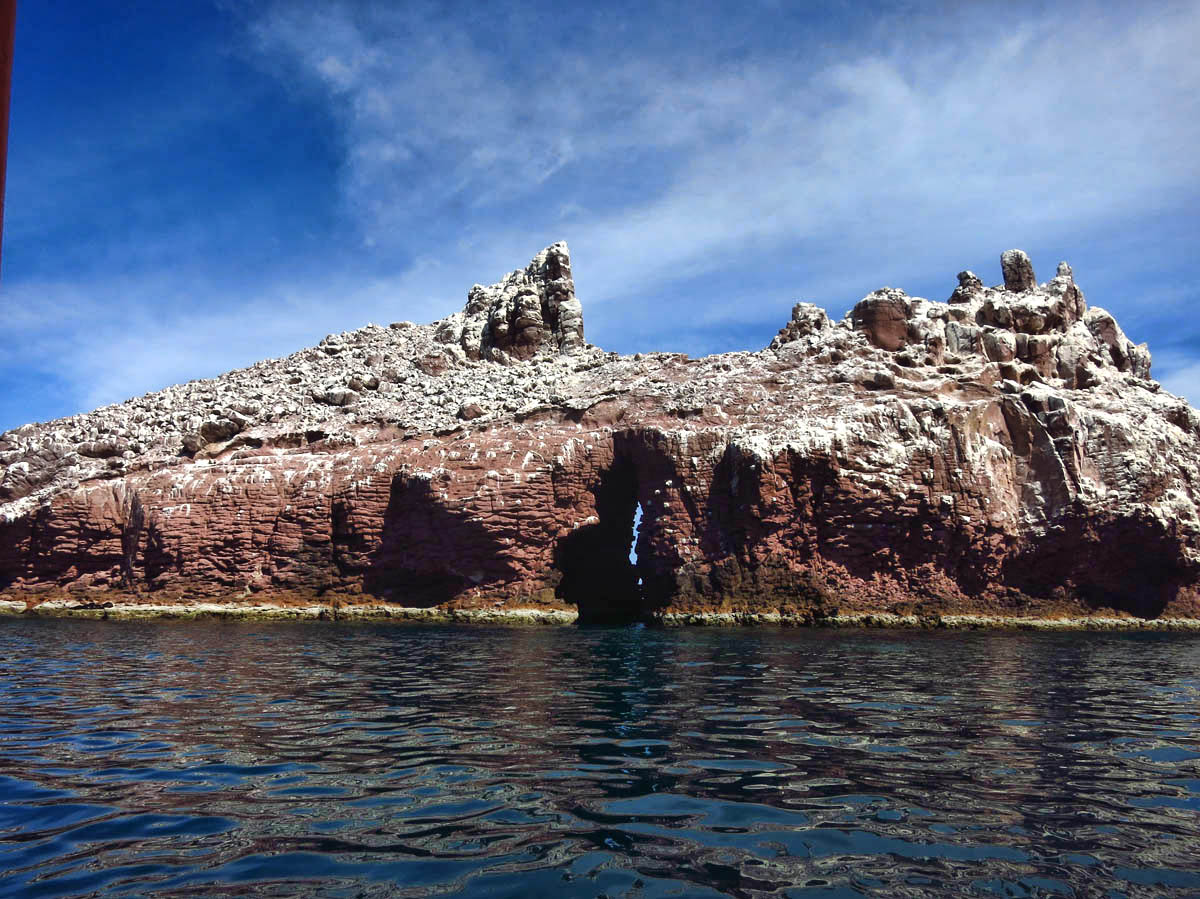 Bad angle, as arch is much wider in actuality.

Our driver will drop us off at the arch, and we will drift with the current, snorkeling over the shallow reef teaming with damselfish, Sergeant Majors, and a dozen other tropicals whose names I once knew but have forgotten. 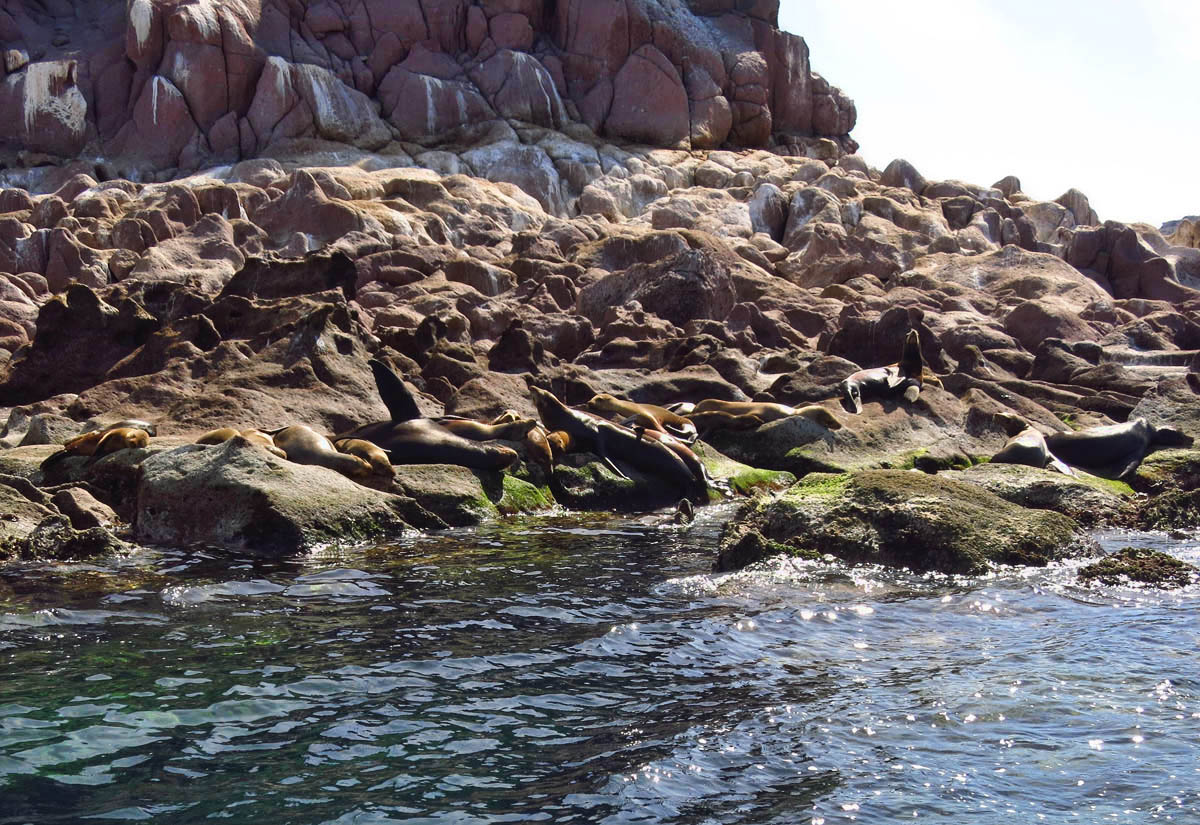 Sea lions are well disguised on the shoreline, but there are reported to be 300 of them here. 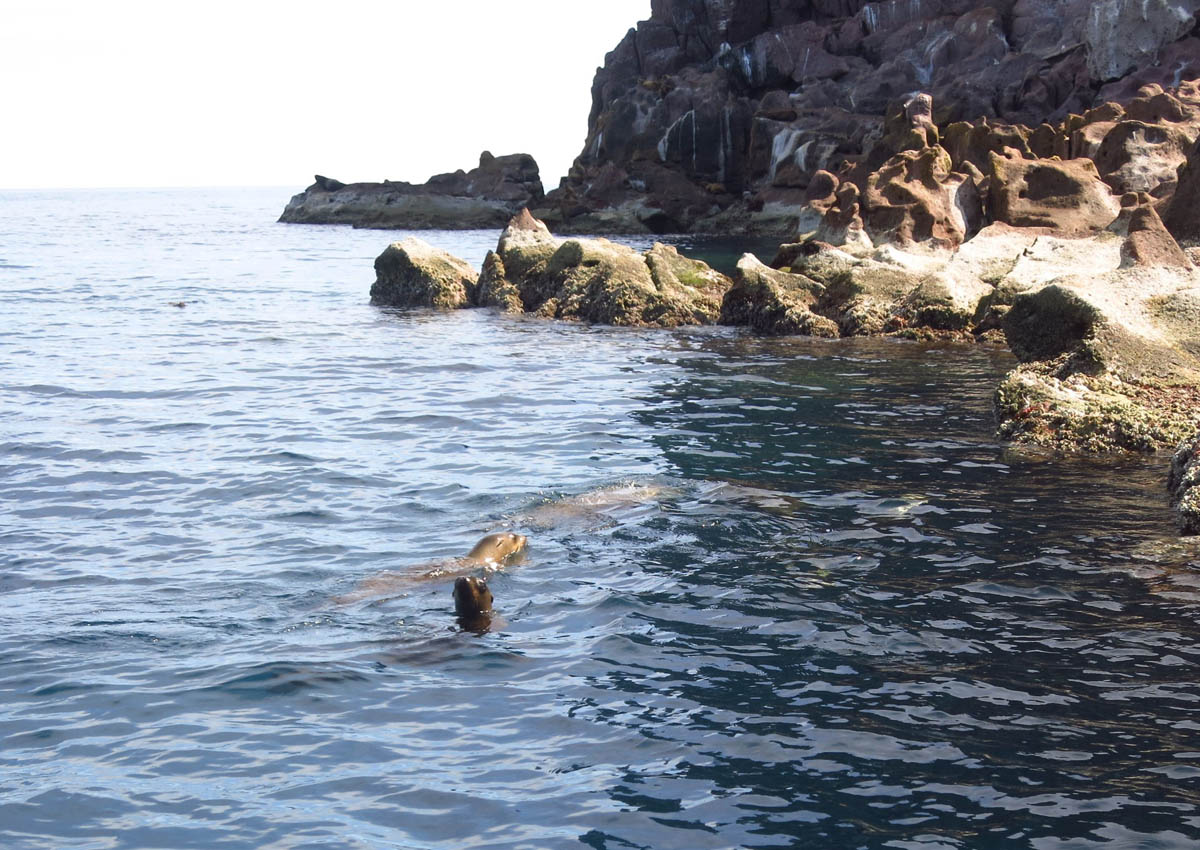 Coming out to play! 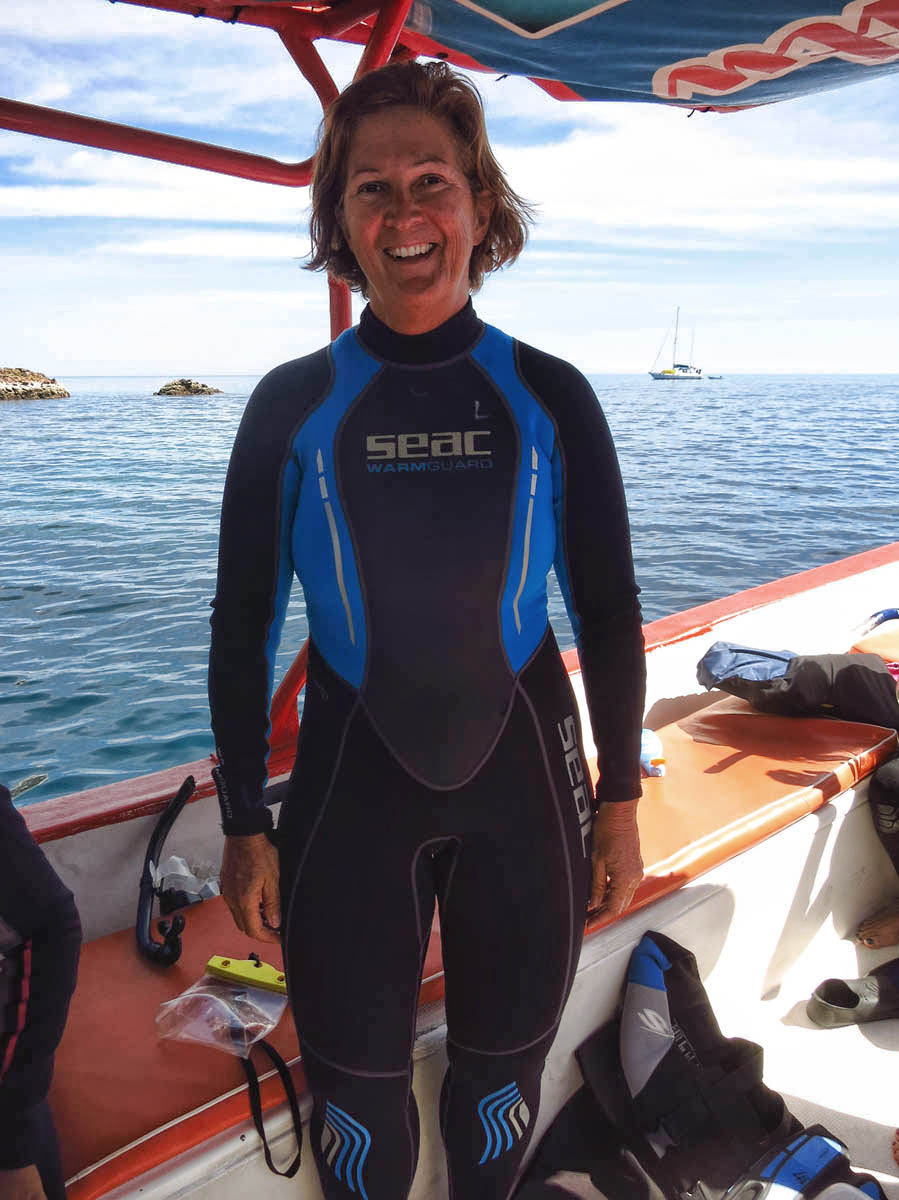 Oh, it feels so good to be back in neoprene again!

As I slip over the edge of the boat, the chilly water causes me to let out an audible gasp, but I soon forget all about being cold.  We are not in the water one minute before the dark shadow of a sleek sea lion darts by.  Raul dives down and engages in a game of tag, while the rest of us look on.    Next we encounter a large male who starts blowing bubbles at us.  Raul tells us this is a sign of aggression, similar to a snarling dog, so we move on.   As we drift along, a group of four juveniles come into view.  They are playing, twisting, turning, doing loop-de-loops as if they were practicing a well-choreographed water ballet.  It is mesmerizing.  I don’t want this ballet to ever end, but they are far too fast, and off in a game of chase they go. 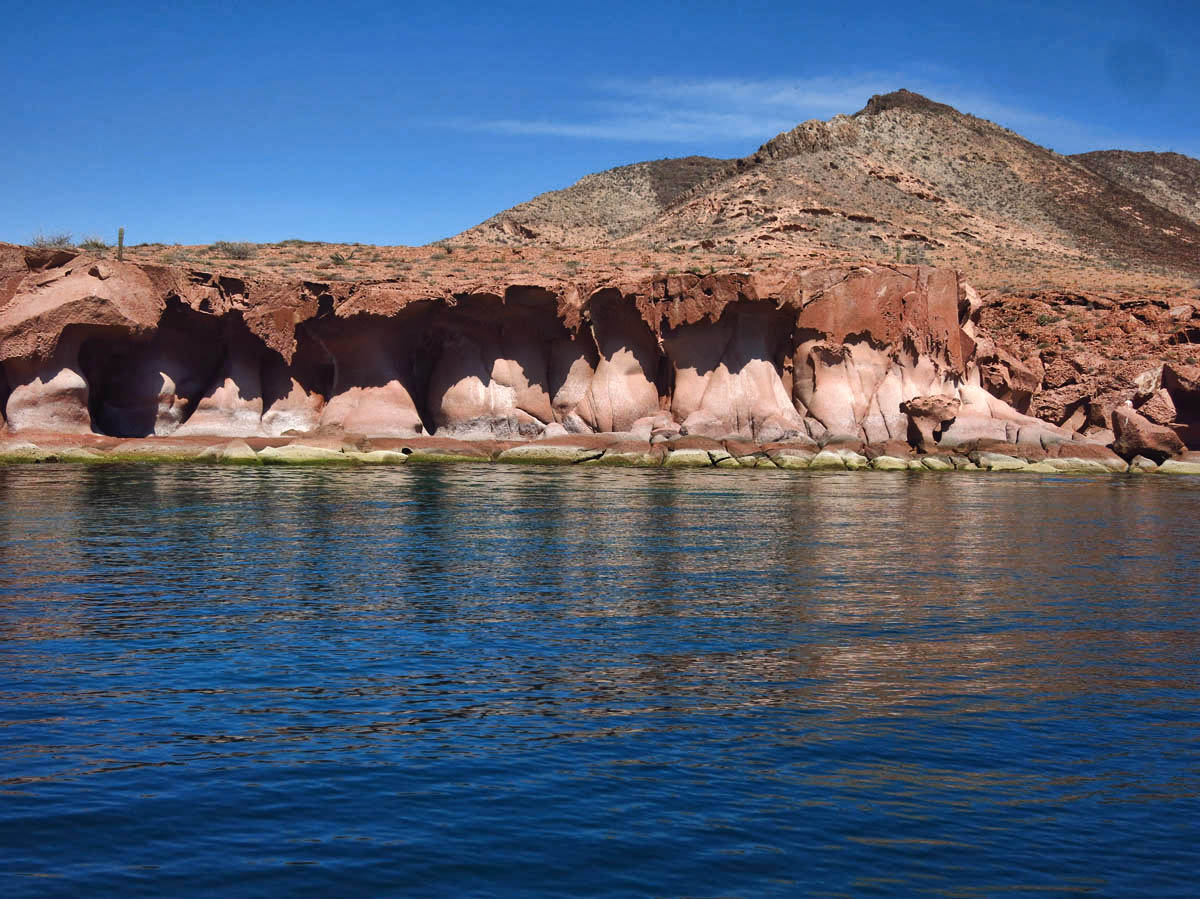 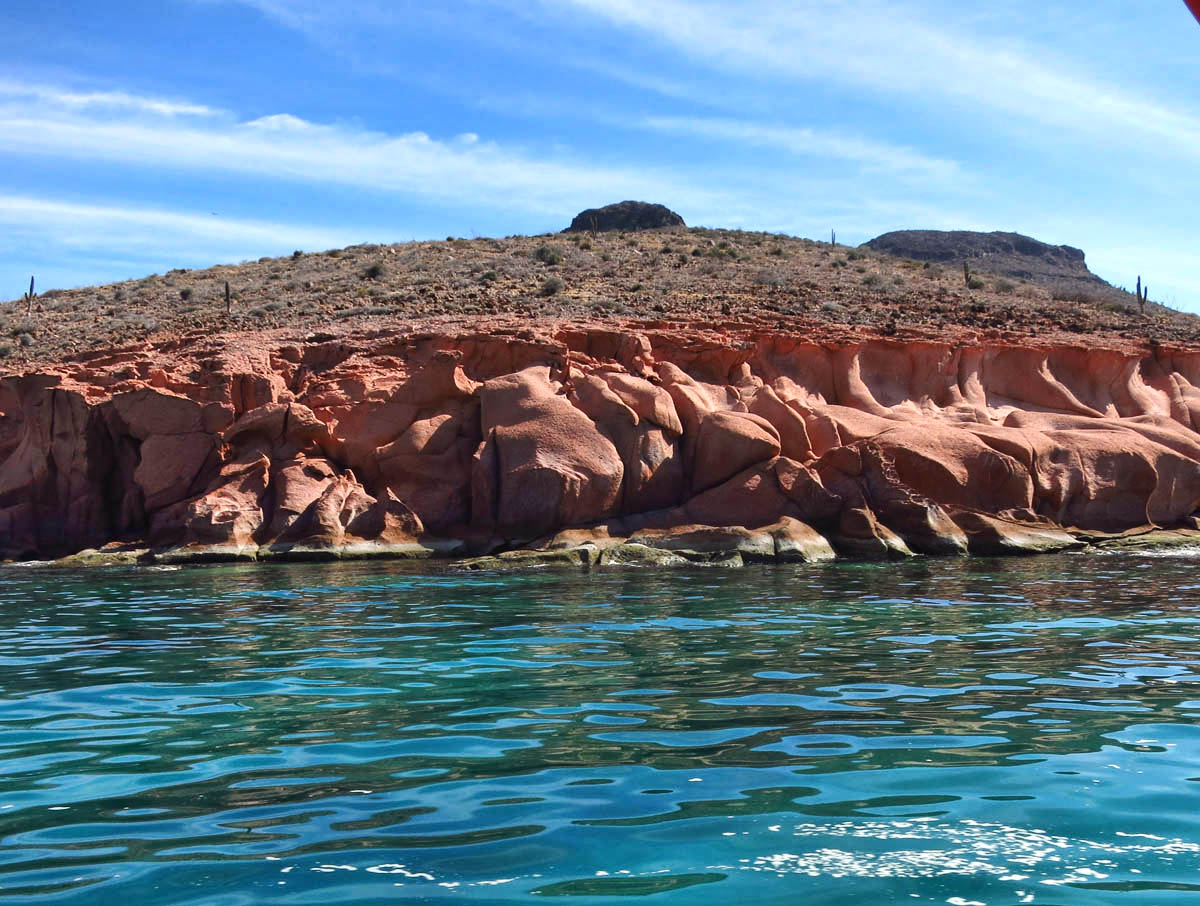 Our time in the water is over way too soon, as we have drifted to the end of the shoreline.  Once everybody is back on the boat, we speed across the glassy surface to a nearby beach for lunch.   Raul tells us to go swim, walk, snorkel, whatever we like while they prepare our lunch.   The bay is like “bahama blue,” so I head out to swim to my heart’s content. 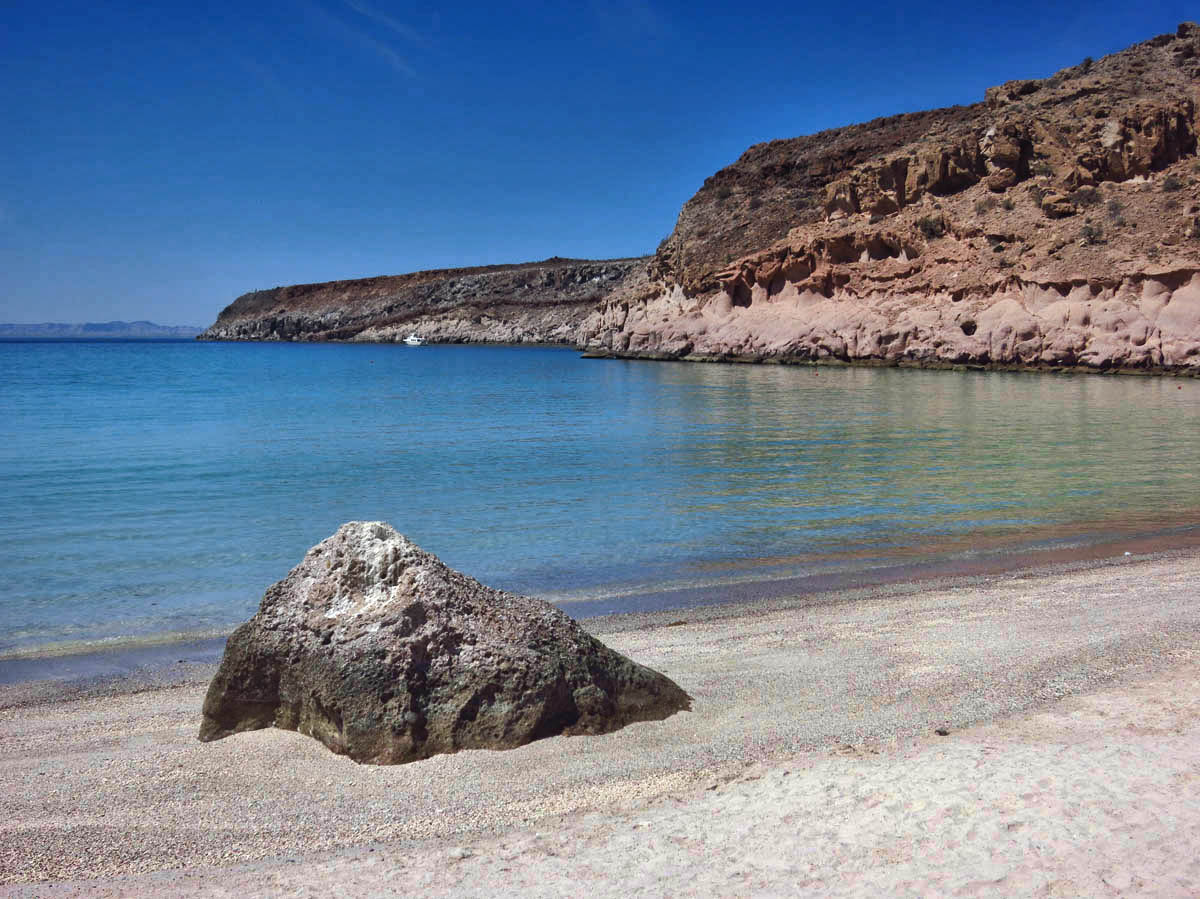 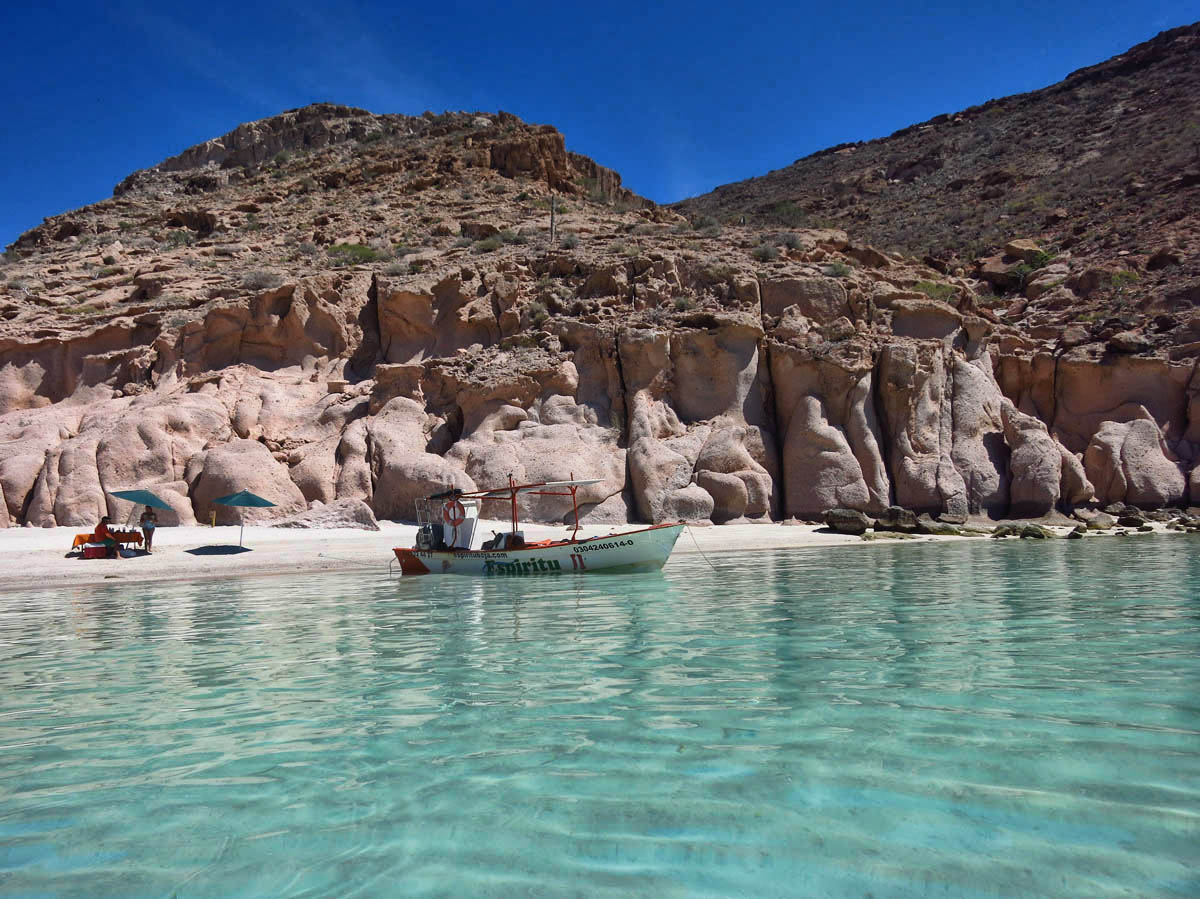 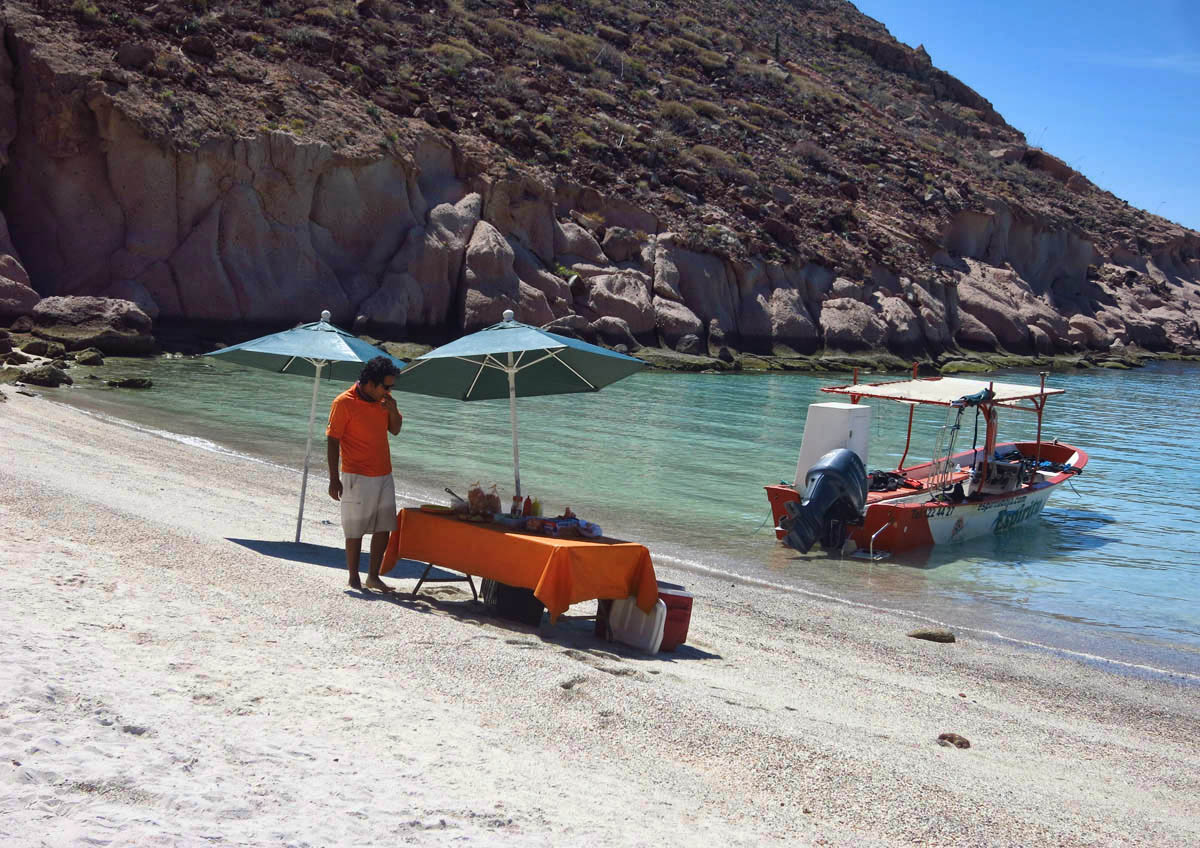 Lunch is a full spread for sandwiches, along with fresh ceviche and tostados.   Raul tells us we have plenty of time to relax due to our early departure, so I am off for more swimming, floating, bobbing, and fantasizing about my future anchorage.  😉

On the ride back to the bay of La Paz, the dolphins appear right on queue.   Our driver idles the boat while they play off our bow.   Oh, and there are more humpbacks as well.   The “animatronics” of it all are just laughable. 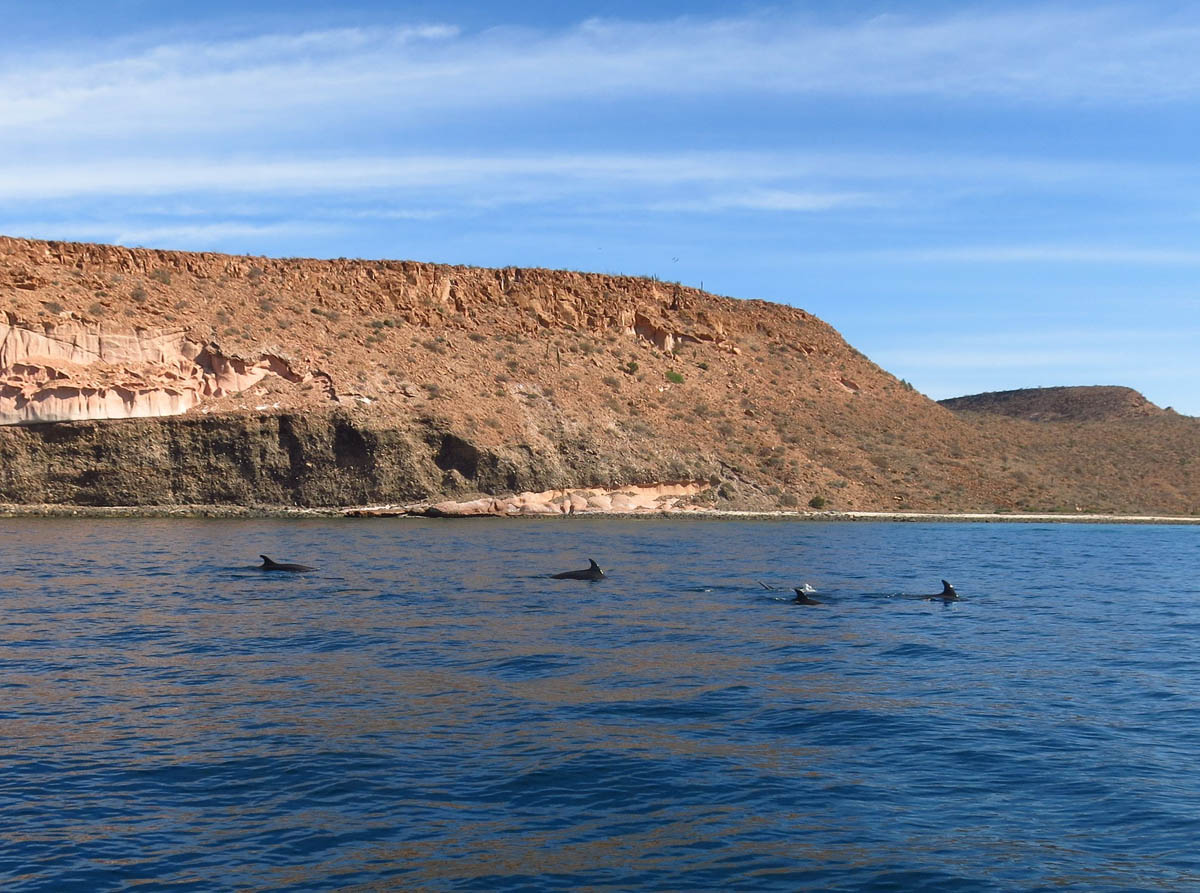 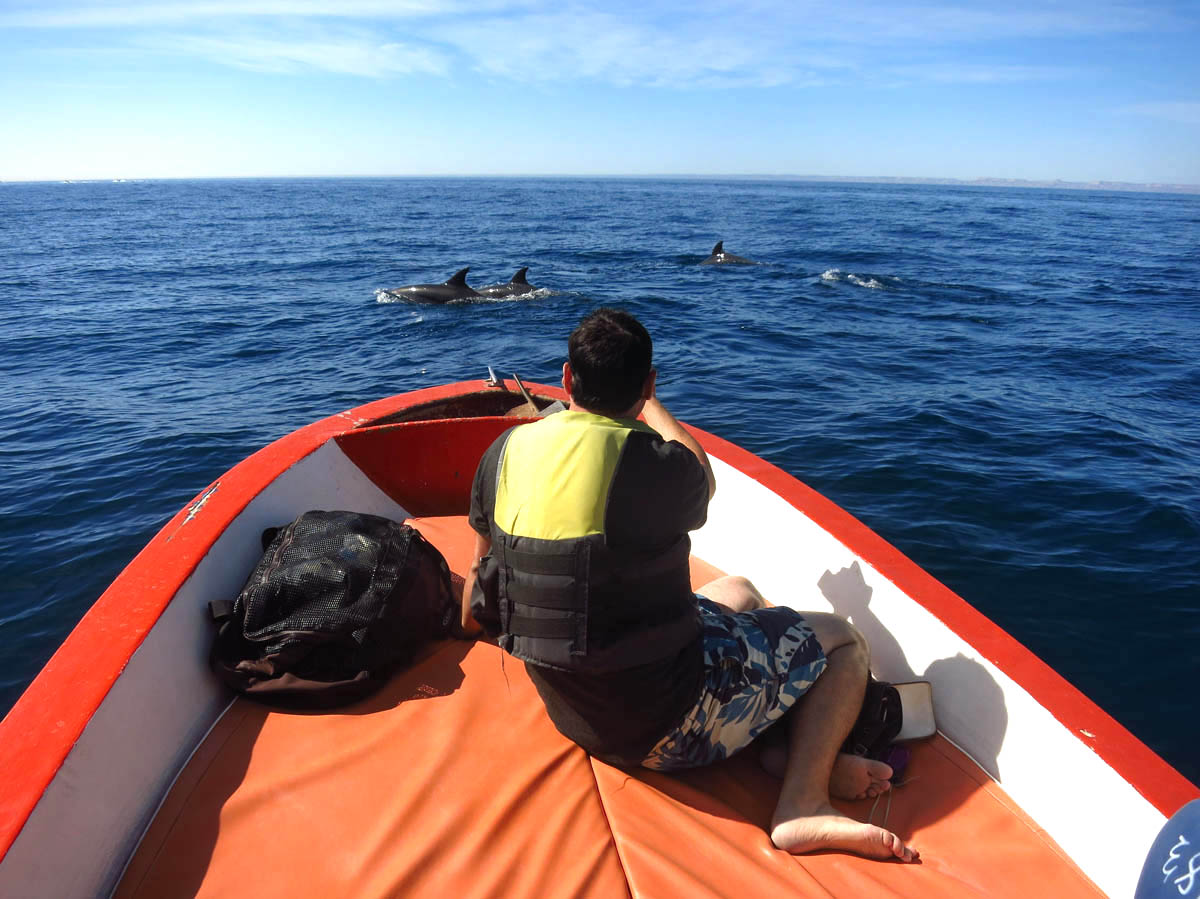 Like Six Flaggs “Lasalle’s River Ride,” we motor in for a closer look.

The beautiful boat ride, clear water, and snorkeling leaves me longing for my days as a SCUBA diver, but it’s been ten years, and I would need a refresher.  Guess it’s good to save something for “next time…”

“The sea, once it casts its spell, holds one in its net of wonder forever.” ~ Jacques Cousteau

10 thoughts on “Inspire. In Spirit. Espíritu.”