There’s a tourism slogan that is prevalent all over Baja, “No Bad Days in Baja!” You see it emblazoned on everything from tee shirts to tequila shot glasses, vintage vans to surfboards. I would have to agree. Oh, sure there was that 24 hours in Cabo. But that really wasn’t “bad.” Just not to my liking. And then there was the afternoon I was chased down the hill by a scary pitt bull. But that was probably as much my fault for running. Otherwise, it was 17 blissful, feast-filled days.

Here are the logistics of the trip:

I set a budget of $70 per day for this trip. I knew it was aggressive, given how fast I was moving. Not much downtime for lounging around in a beach chair, spending nothing. But $70/day was my budget for the 2002 Round the World Tour, and I hit it exactly. Also, coincidentally, $70/day is my average daily living expense now in the Winnie, once I have taken out Health Care and monthly internet costs. So I figured I could come in much lower than that in Mexico.

But having every day be filled with either a tour or a bus ride, I came in a little over, at $75 per day ($82 if I average in my $120 airfare.)  But this includes things like snorkeling with sea lions and boat rides to pet the whales. I also had a few more…okay, a LOT more….Cervezas and margaritas than I would typically, along with a few hotel upgrades.

One plug for fitness, I never set foot in a taxi. With the exception of long distance buses and one shuttle to the airport, I walked everywhere. 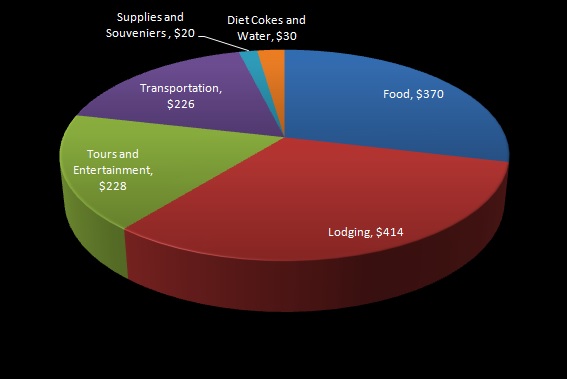 Note: All alcohol falls under “Food” category, as it was typically consumed with a meal. Only Diet Cokes and bottled water are seperate.

I want to give a plug to the little Bagallini Pouch. I have carried this pouch with me on every international trip for the past 10 years. It’s invincible. It has five color-coded pouches (orange and pink on one side, green and purple on the other) that make it so easy to keep things organized. My passport lives in the main top pouch. Then I use the colors to keep myself organized. Pink for Pesos. Green for Greenbacks. Orange for Urgent, like bus tickets and luggage claim checks. You get the idea… 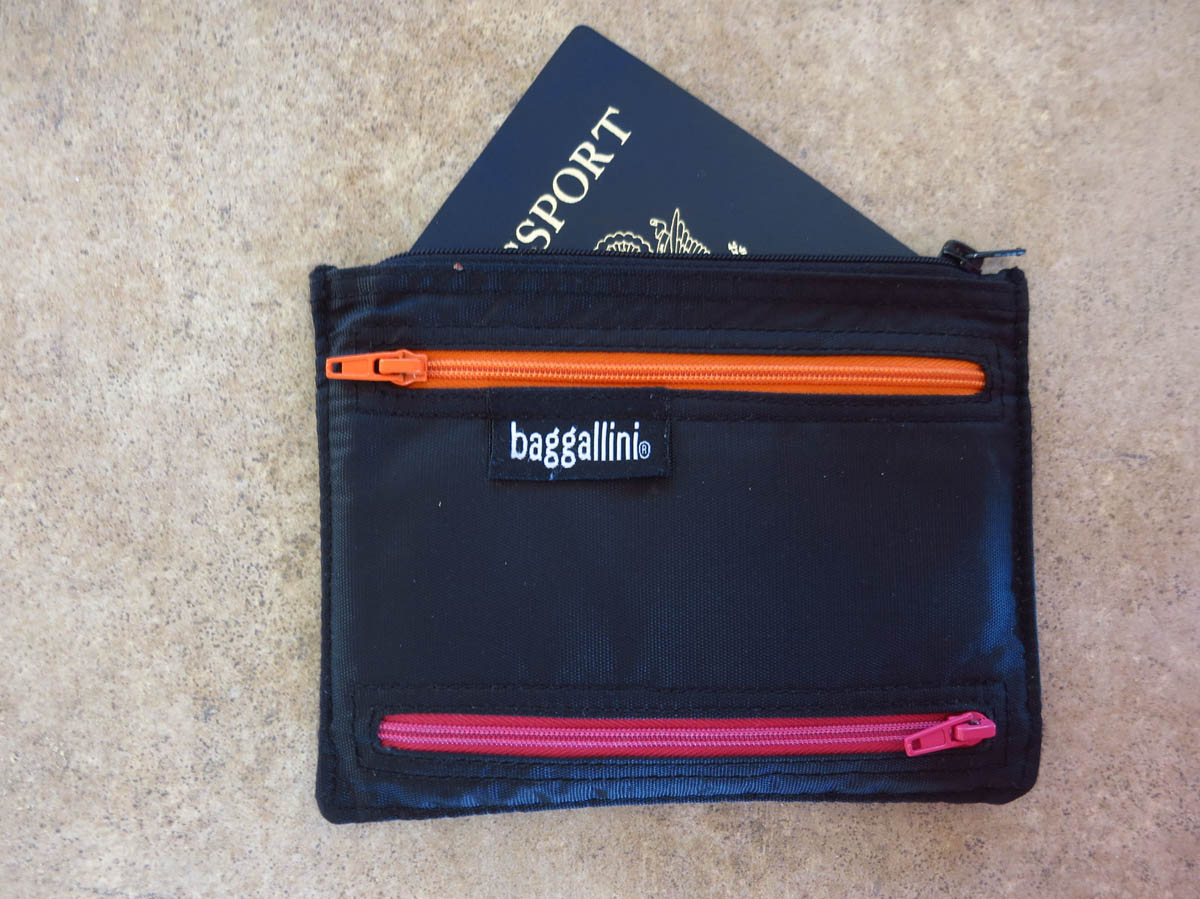 The beauty of traveling with a backpack versus a suitcase is its portability. Easier to navigate Mexico’s unlevel, pot-hole filled sidewalks. The benefit of having one this size is it’s big enough to have a “hip strap,” which means my butt bears all the weight. But it’s also quite a roomy pack, so the downside is the temptation to fill it. 😮

Here’s my packing list, for my own future reference:

(List does not include “traveling clothes” worn on the bus; tennis shoes, jeans, t-shirt, and long sleeve knit jacket.) I came home with all of the above but the “vintage” ipod, no doubt left in the bus seat. (sniff, sniff)

There were few things I wished I had brought, but they were nagging needs, so I am going to list them here for future reference:

• A wristwatch. It’s just not practical to pull out a smart phone to check the time while waiting for buses, carrying bags, etc.
• A three prong to two prong adapter. Many electrical outlets in Mexico only have two-prong holes, and my laptop charger is a 3-prong. Thank goodness, I was able to find them at the “Ferreteria,” or Hardware Store.
• A small extension cord. Often times, the older hotels will only have one outlet, and it can be too far for the laptop charge cord to reach. If you have camera gear, smart phones, ipods, and laptops that all need charging at the same time, a small extension cord will be handy. I found one at the Ferreteria, but it was 18ft. Had I brought a 6 ft from home, it would have been less bulk.
• Fingernail clippers 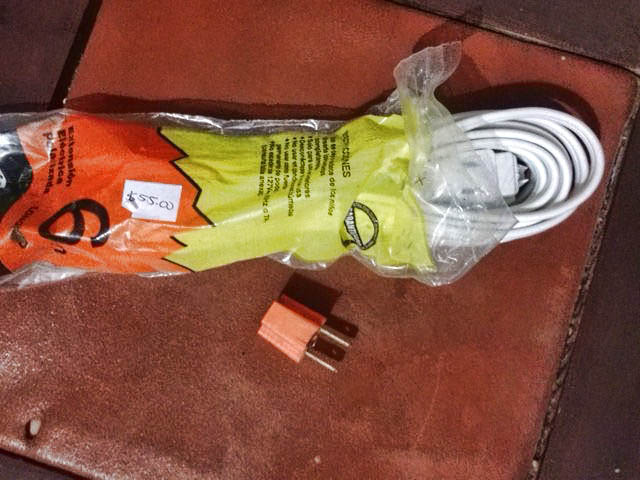 Cheap enough at only $3USD, but only being able to find a 6M (18 ft) was “expensive” in weight and bulk.

Aquila has a very extensive bus system, with online schedules that are easy to read, even if you don’t know much Spanish. Learn a few words like “Arrive,” “Depart,” “When,” and “Window Seat” and they will serve you well. An agent will typically turn the monitor around and let you choose your own seat. The further back you go, usually the warmer the temperature and rougher the ride, but also the less crowded, as the Mexicans seem to like to be toward the front.

All Aquila buses I rode with the exception of one had onboard wifi which worked consistently as we drove through towns, and often times even in the more remote regions. All Aquila buses use the same naming convention. The wifi connection is titled with the bus number followed by a dash, and the bus name in CAPS, for example, “164-AQUILA” This is handy to know, as even if you are sitting in the bus station when a bus pulls in, you can still pick up their signal and download emails for the time that bus is parked at the station.

I made it a habit to always ask schedules for departure in a location upon arrival. Before I would head out, I would go into the station and photograph the outbound schedule, almost always on display overhead. Just in case the internet was problematic…

Crossing the Border to travel by Bus – Ride the San Diego Trolley to the end of the “Blue Line,” which is San Ysidro. Walk across the border. If going to Ensenada, turn right for another two blocks to Plaza Viva for the ABC Bus Station. For points beyond Ensenada, you must take a taxi ($20USD) to the main bus station.

Crossing the border to travel by Plane — Ride the San Diego Trolley to the end of the “Blue Line,” which is San Ysidro. Walk across the street to McDonalds, and go up the stairs. Find the “Tourismo Express” shuttle bus in the Border Station Parking Lot. They offer shuttles every 20 minutes to the new “CBX,” or “Cross Border Express” skyway where you can walk across the border right into the Tijuana Airport! There are numerous low cost carriers that will take you to La Paz or San Juan de Cabo from here. Remarkably easy!

My three “Go To” resources for this trip:
• Carlos Fiesta’s Baja Expo — This website doesn’t look like much at first glance. But if you click on the city, there is a wealth of information on each destination! I particularly found the “Gringo Factor” and “Lodging” sections most helpful. Thank you, Carlos, whoever you are…
• “The Moonguide” – It wasn’t as “robust” as a Lonely Planet when finding budget accommodations, but it was more up to date than the most recent 2007 edition of the LP.
• Trip Advisor – I don’t typically use this for accommodations, as it is too challenging to find the budget options. But I do use it religiously to find the “Top Things to Do” and restaurant recommendations 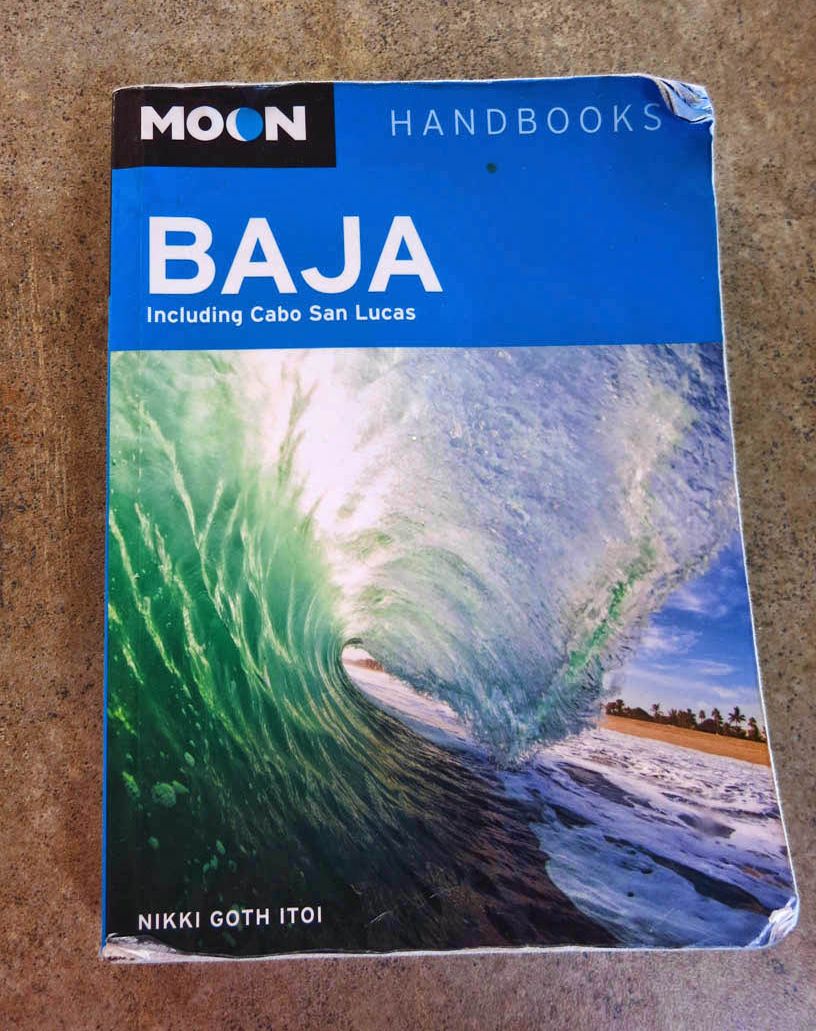 I would not have been able to fit this trip into the budget had it not been for the generosity of my dear friend Margie. Having to pay to store both the Winnie and the Tracker in the San Diego area would have made a trip like this cost-prohibitive. Not only did she make her driveway available, she also fed me and sent me off with a bag of oranges, lemons, lettuce, avocados, and two bottles of wine! My most heartfelt thanks, Mi Amiga! 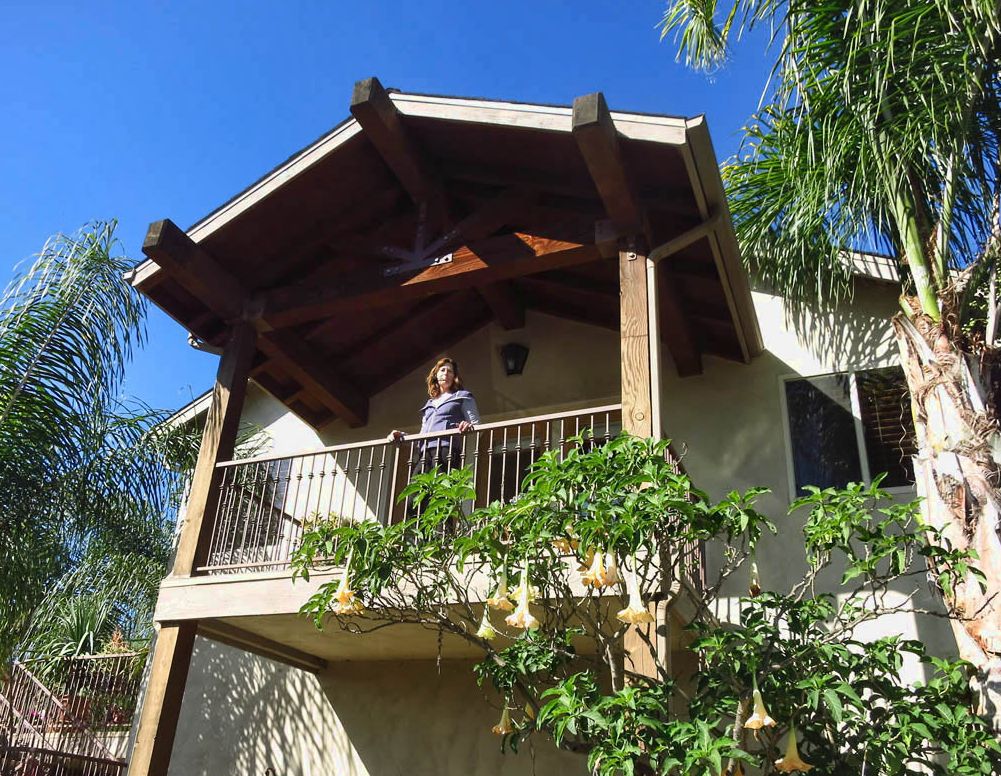 My beautiful friend Margie, wearing a headset because we are talking while she is on a conference call. 😉

And lastly, I thank all my wonderful blog followers for all your kind comments and compliments. I hope you enjoyed the “Baja Series” as much as I enjoyed writing it. It was Anais Nin who said so beautifully, “We write to taste life twice. In the moment, and in retrospection.”   I enjoyed the retrospection, and I hope you did too.

I toast you with a Margarita! 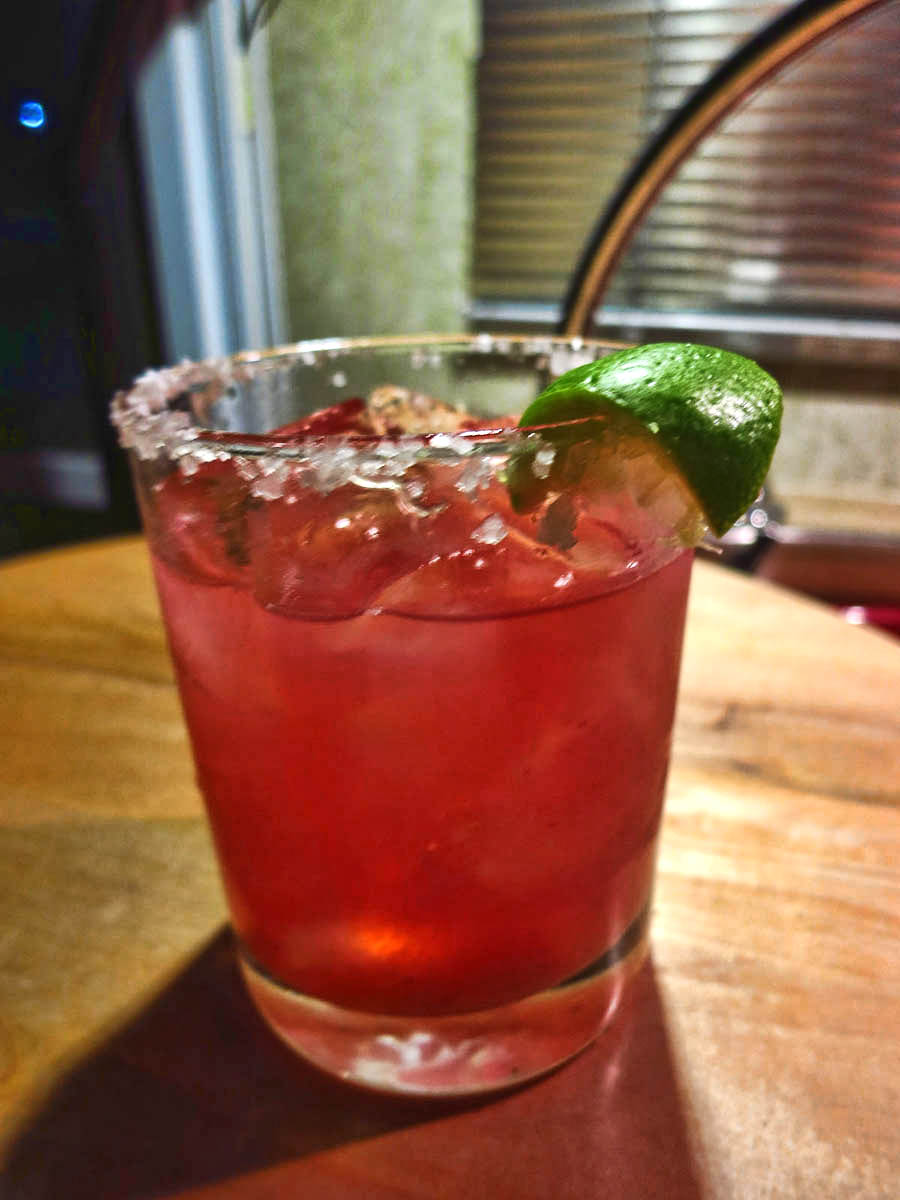 It may not be in Mexico, but it’s one darned good margarita!

• Two parts silver agave tequila
• One part Grand Mariner
• Juice of one whole, juicy lime
• Juice of half a blood orange, this one compliments of LuAnn and Terry’s tree
Shaken, poured over ice in a salt-rimmed glass.  Best enjoyed in Baja, but a Winnebago is sure to be second best!

36 thoughts on “The Baja Breakdown”