I recently passed a significant milestone in my nomadic life, my three year anniversary of becoming a full timer. I figure if I account for time away such as trips back to Texas to be with family, river trips, vacations to Mexico, etc. that should put me right around a thousand days on the road. It seems like just yesterday that I broke the news to my Mom that I was selling my house and going to live full time in an RV. Her exact words were, “You can’t be serious!” Thankfully, I was, as it’s been about the best three years of my life thus far. Whenever one dreams, it’s a good idea to always append it with “or something better,” because this life is definitely better than I ever dreamed. 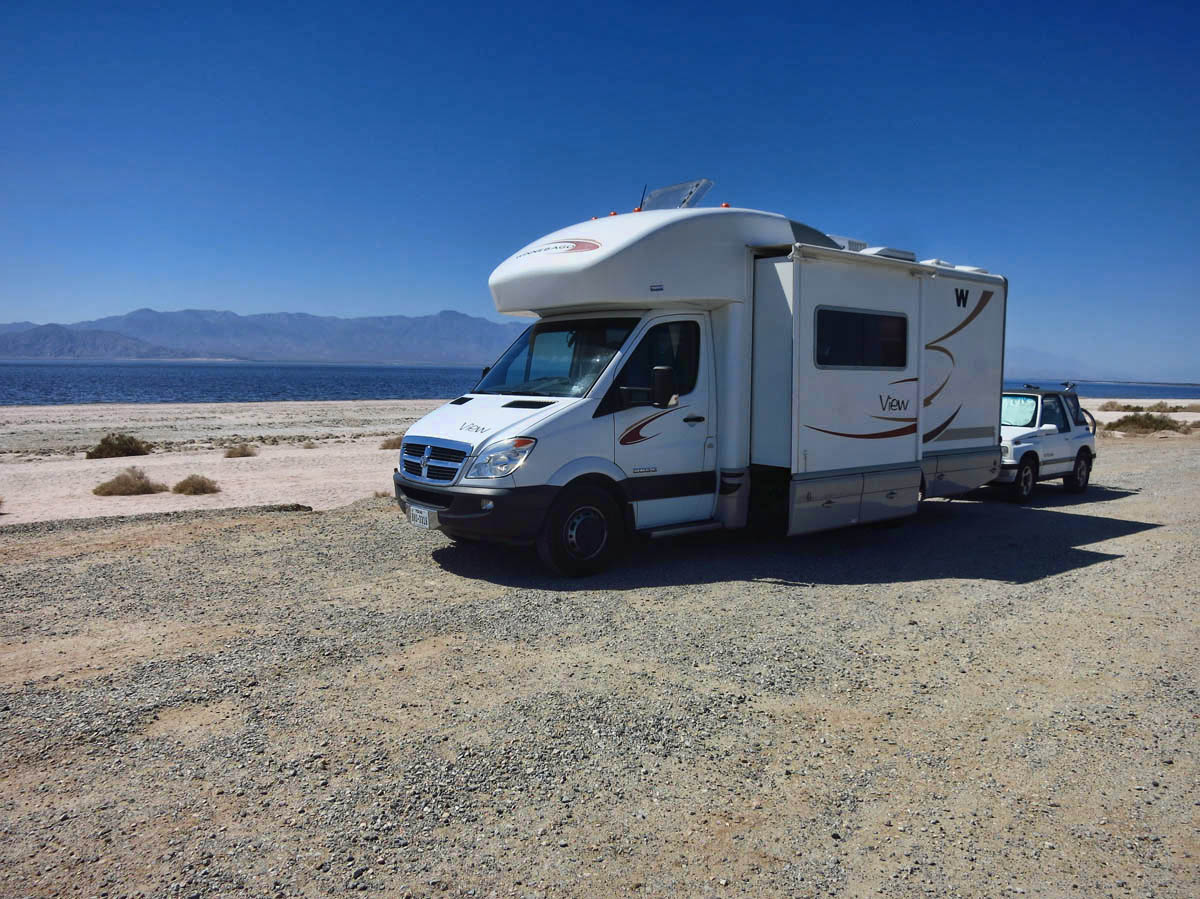 Here I be…..by the Salton Sea… 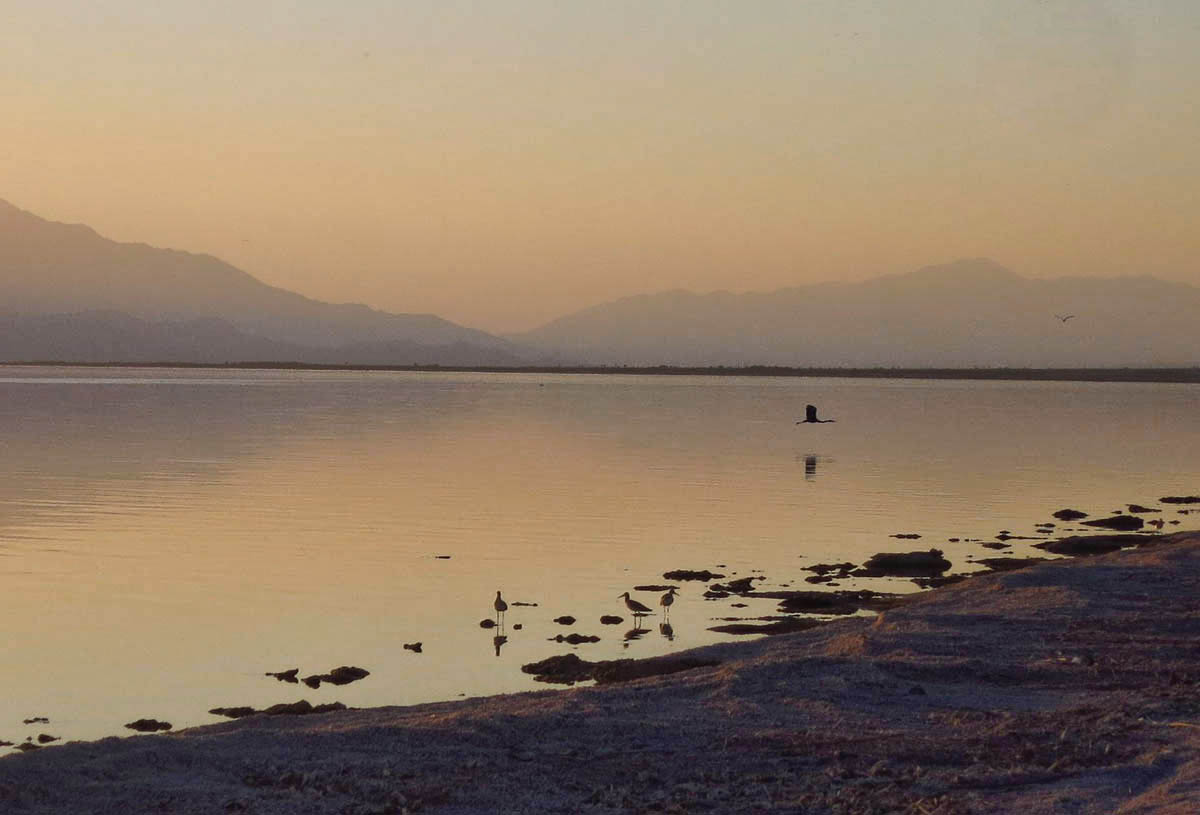 The Salton Sea is California’s largest lake. It’s 225 below sea level, second lowest point in the USA behind Death Valley. 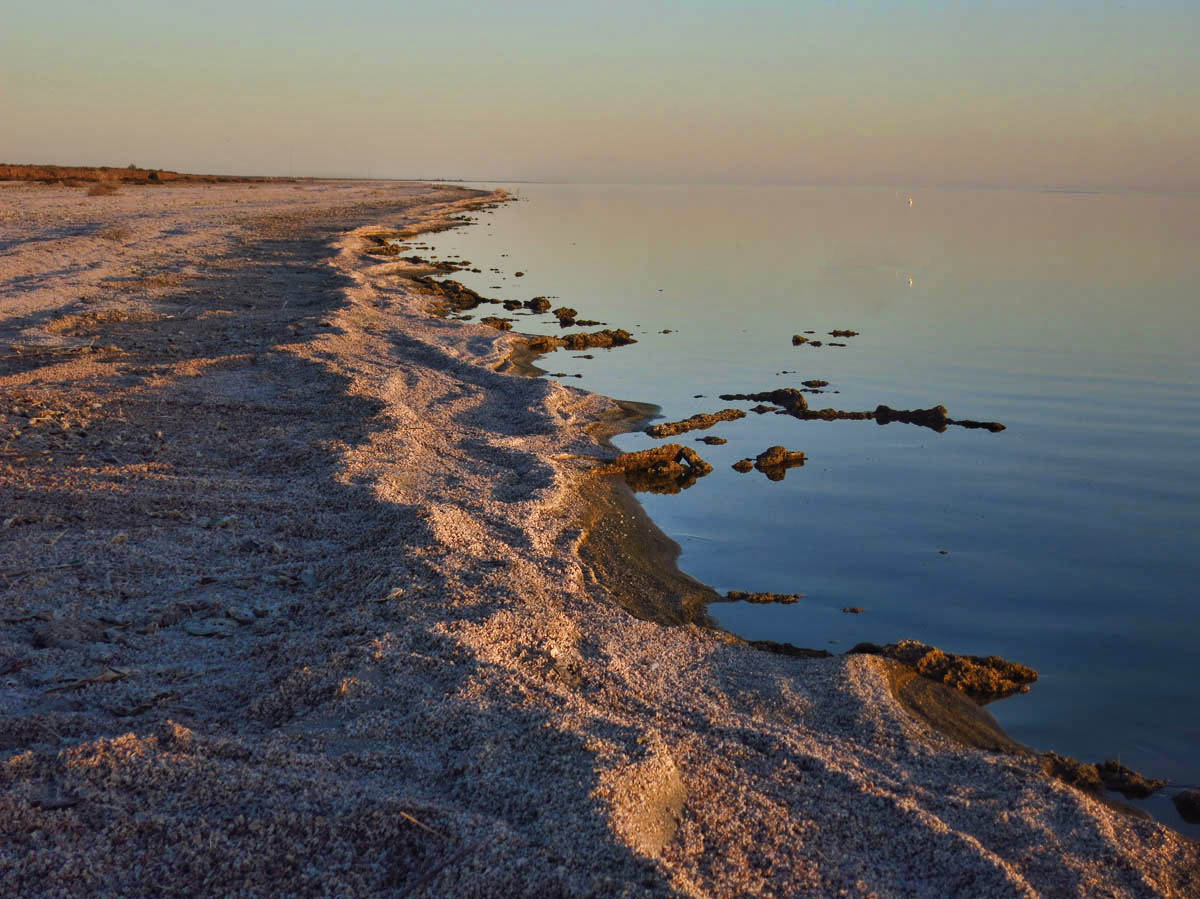 Greater salinity than the Pacific, but not as much as the Great Salt Lake. 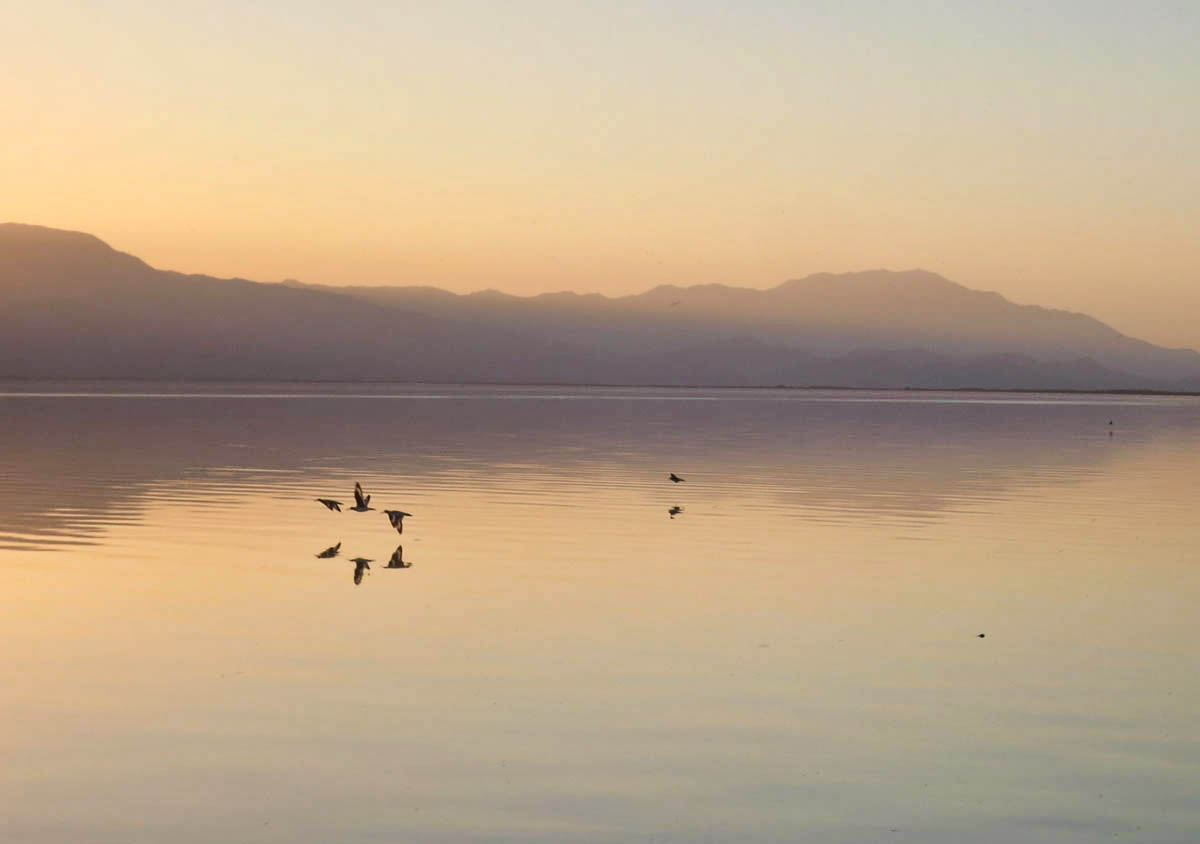 Home to many migratory birds, second only to the Texas Gulf Coast.

So much has happened within the past three years. Severing a 24 year relationship with American Express. The sudden tragic loss of my younger brother Stephen, followed three months later by my Dad’s release from the bounds of his 94 year old failing body. It’s like life has intensified, boiled down to be more concentrated while I have been on the road. Friendships seem more meaningful, yet come and go more quickly. I seem to work harder at those I want to keep, for fear that the nomadic lifestyle will cause me to feel further loss in my life. 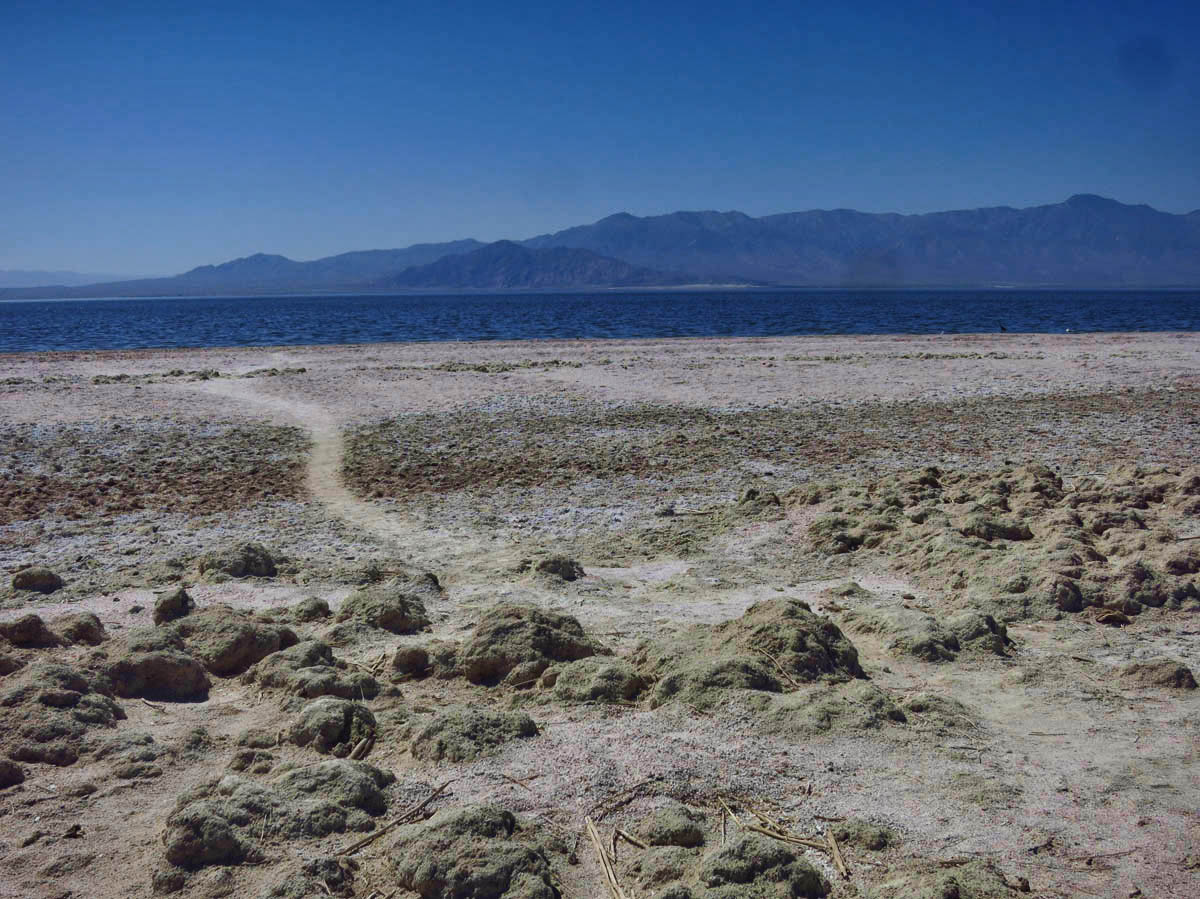 I was hesitant to walk down to the water, as I didn’t want to get my shoes full of sand. 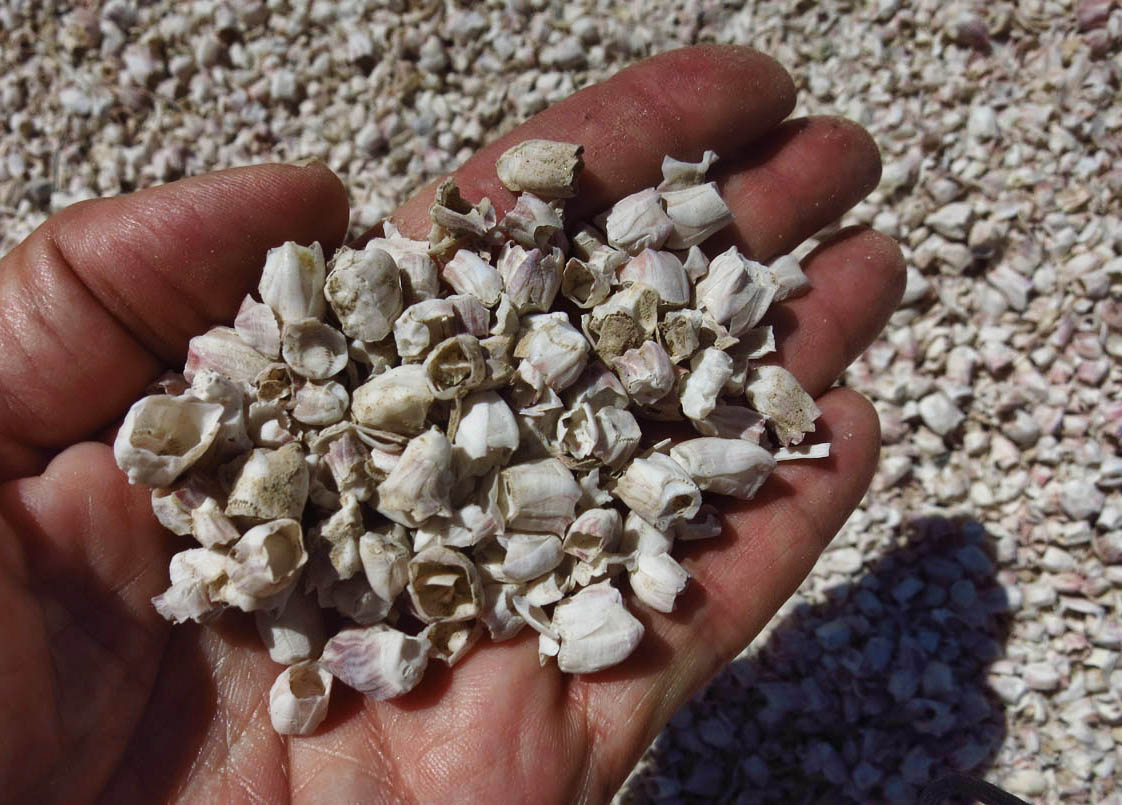 Turns out it isn’t “sand” at all but these little barnacle shells lining the beach. 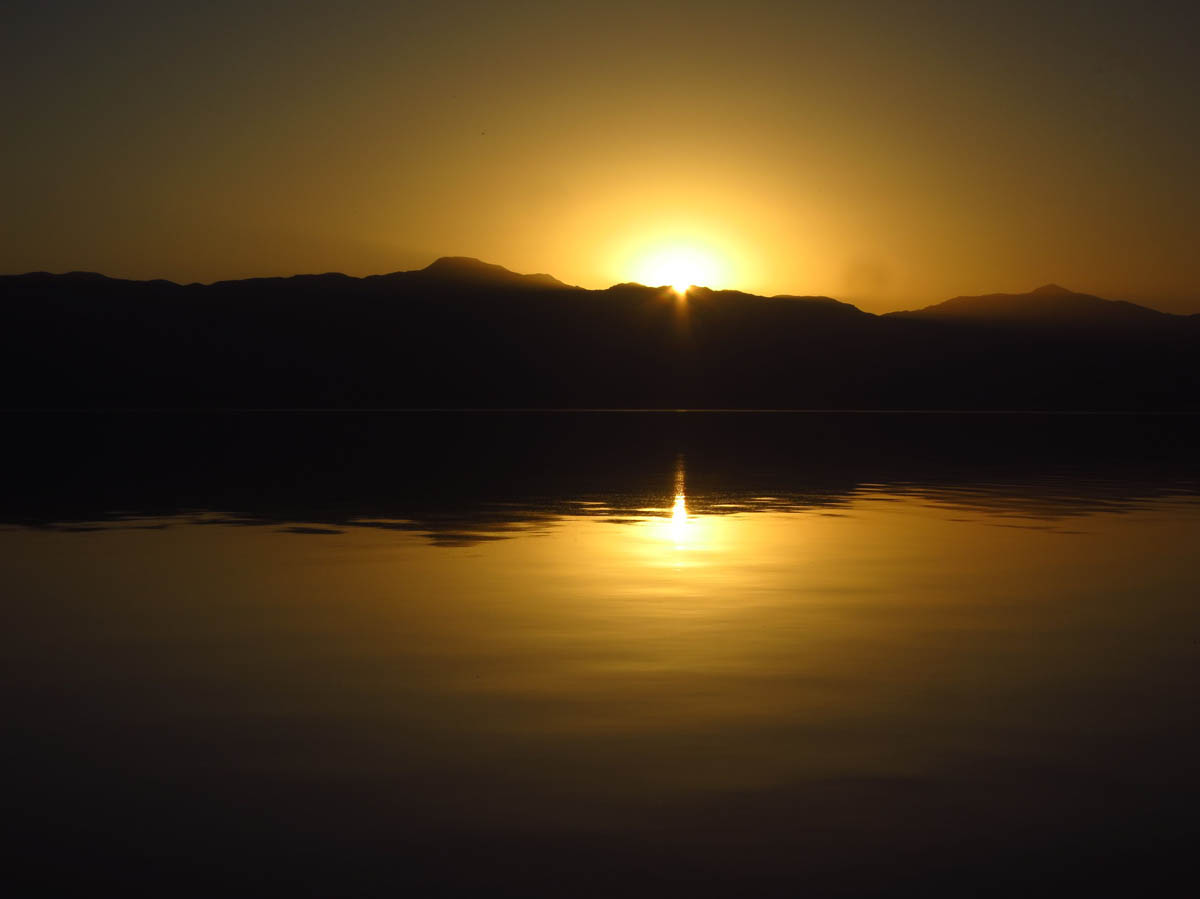 The Salton Sea is a “terminal lake,” meaning water flows in from numerous sources, but the only way out is through evaporation. 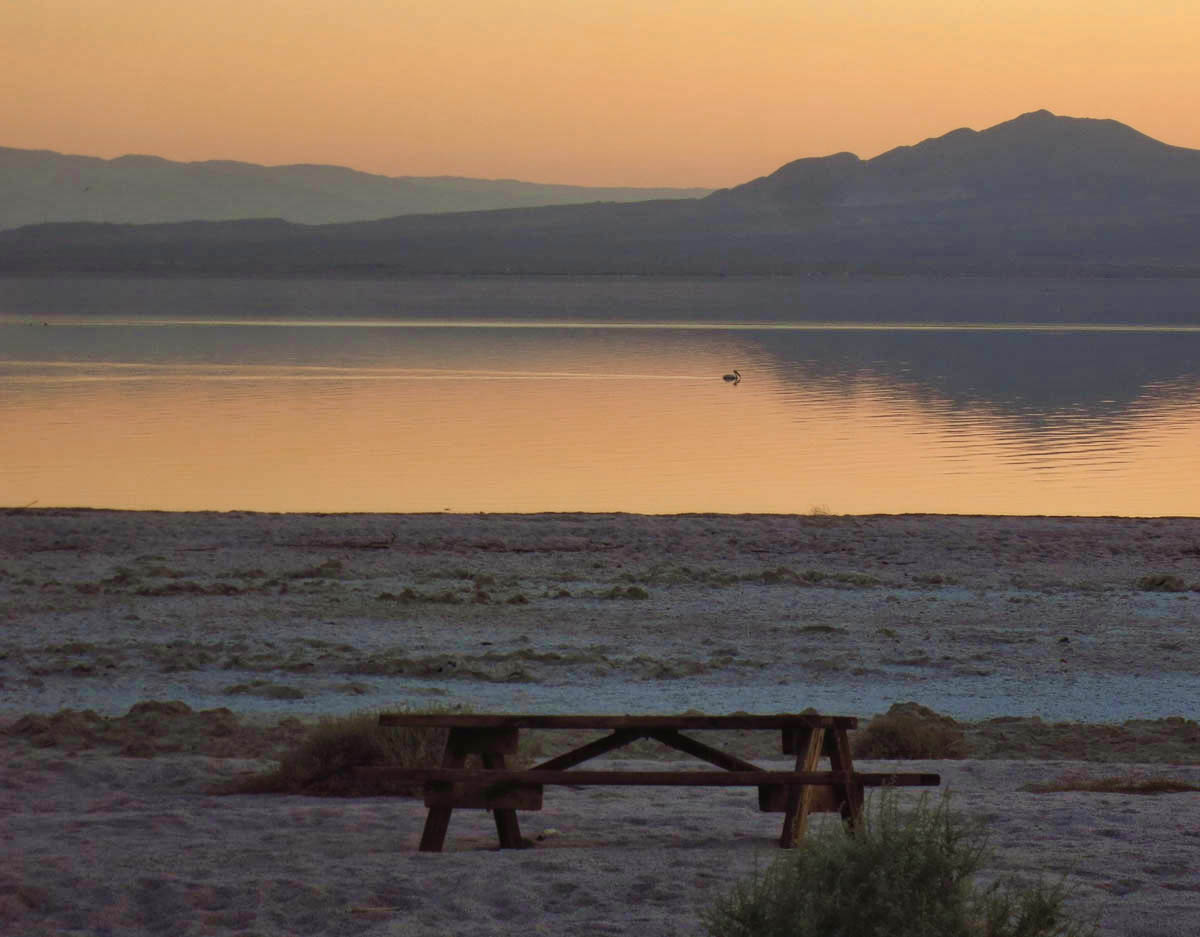 There is an estimated 500 million tons of salt in the Salton Sea. 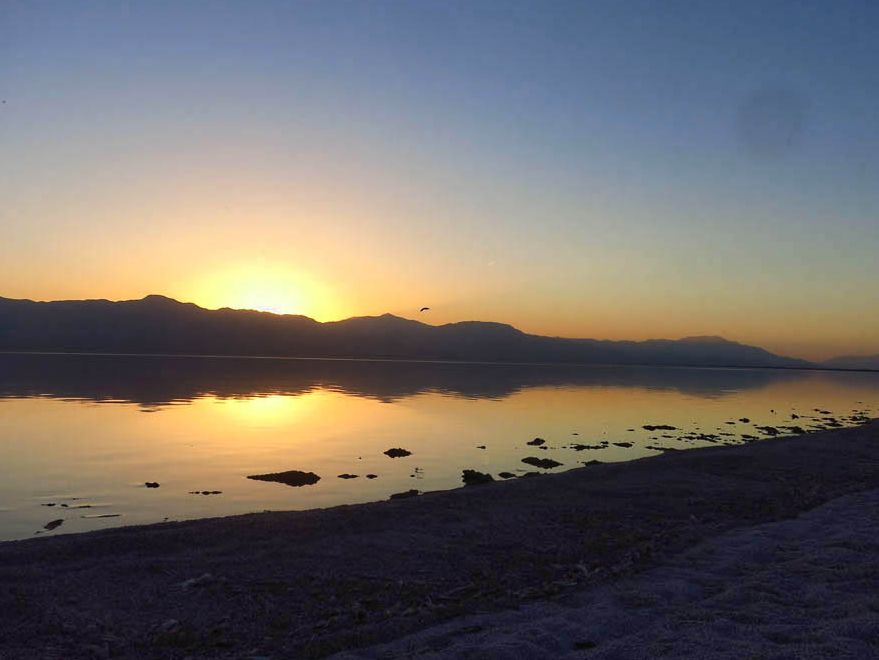 Fish kills happen frequently when the dense algae consumes all the oxygen in the water. The largest was in 1999 when 7.6 million fish were killed in one day.

Although I relish every day in the simplicity of my life, it’s not as worry free as I anticipated.   I traded worry about termites and foundation cracks of a sticks and bricks for worry about leveling effects on my refrigerator, and varmints taking up residence under the hood.  Things that I thought would be hard (i.e. dumping) are quick and easy, while things I never considered (leveling) give me my biggest headache.  If there is one thing I would like to change going forward, it would be “Worry less.” 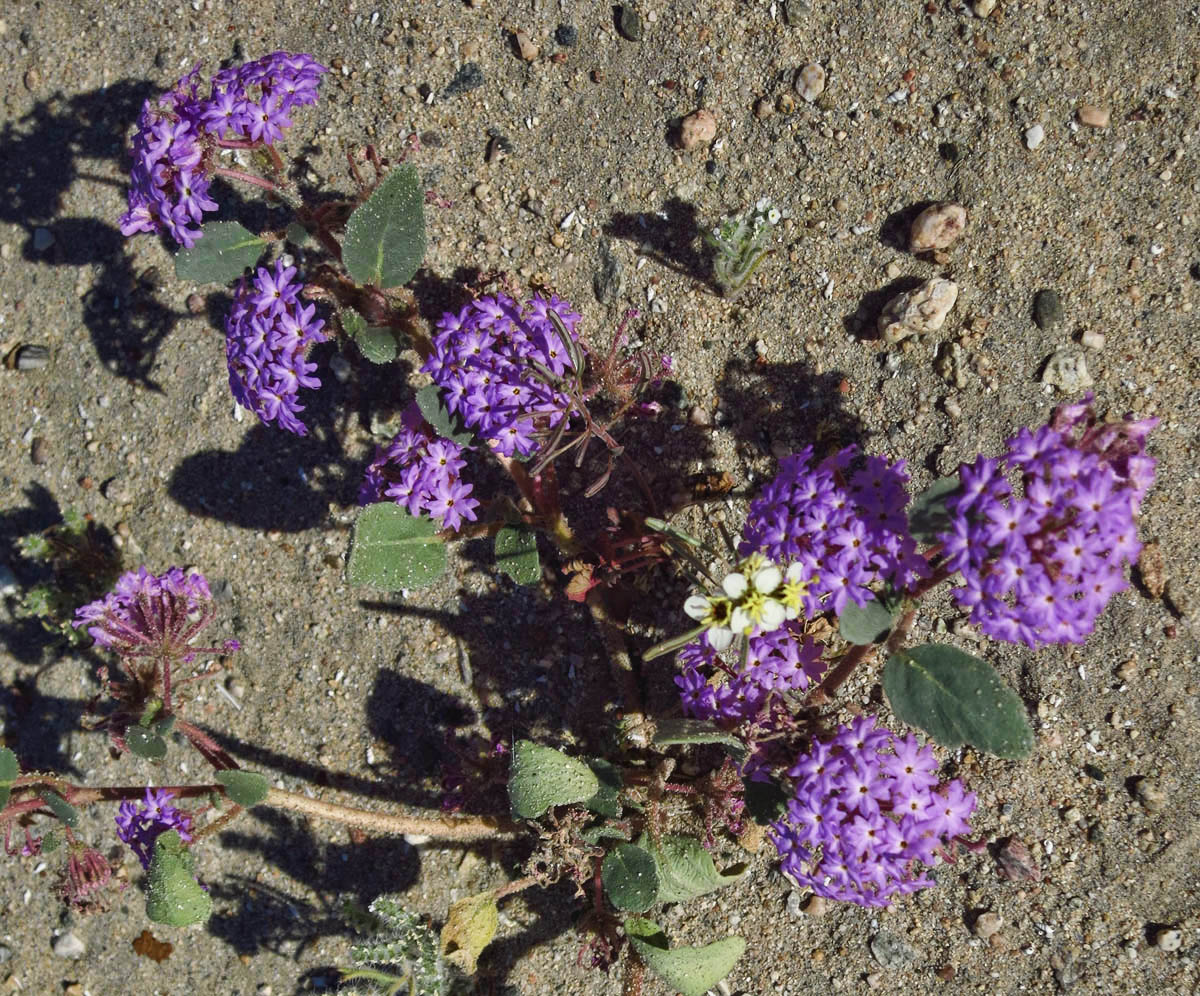 I marvel at how anything this delicate can grow in such a harsh environment. 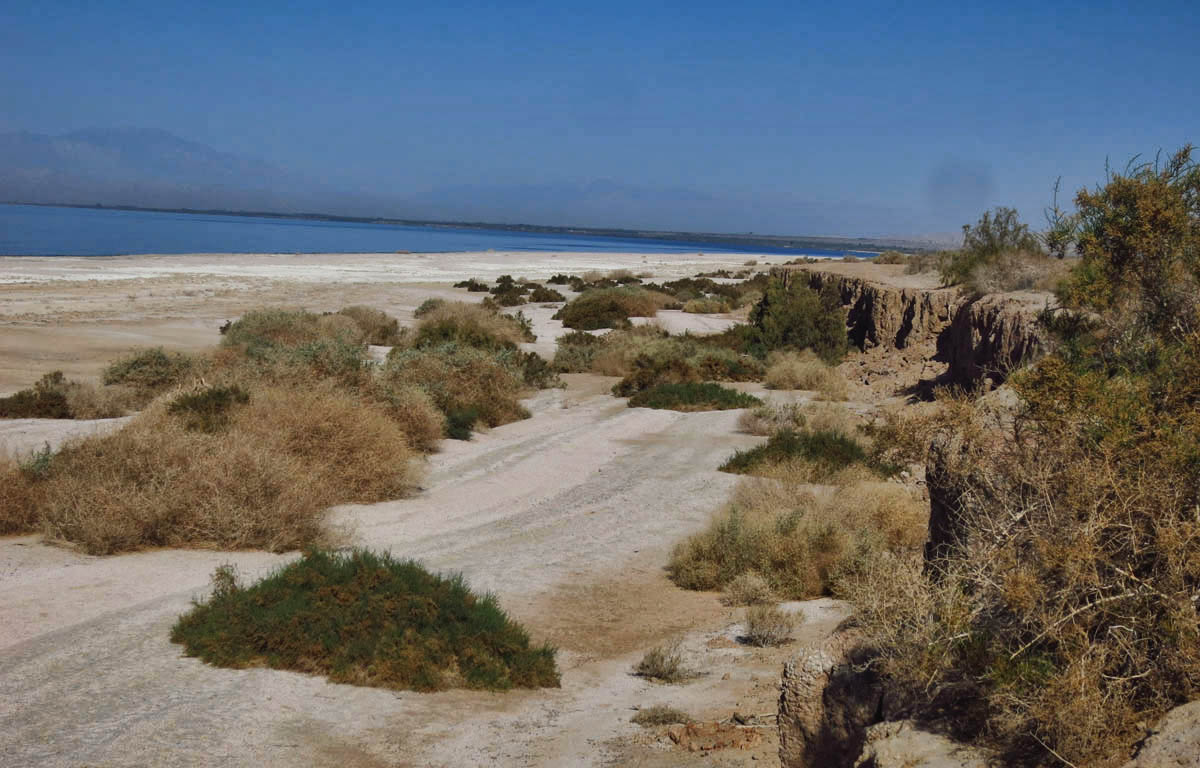 There is a path that follows along the bluff above the shoreline for at least 3 miles. 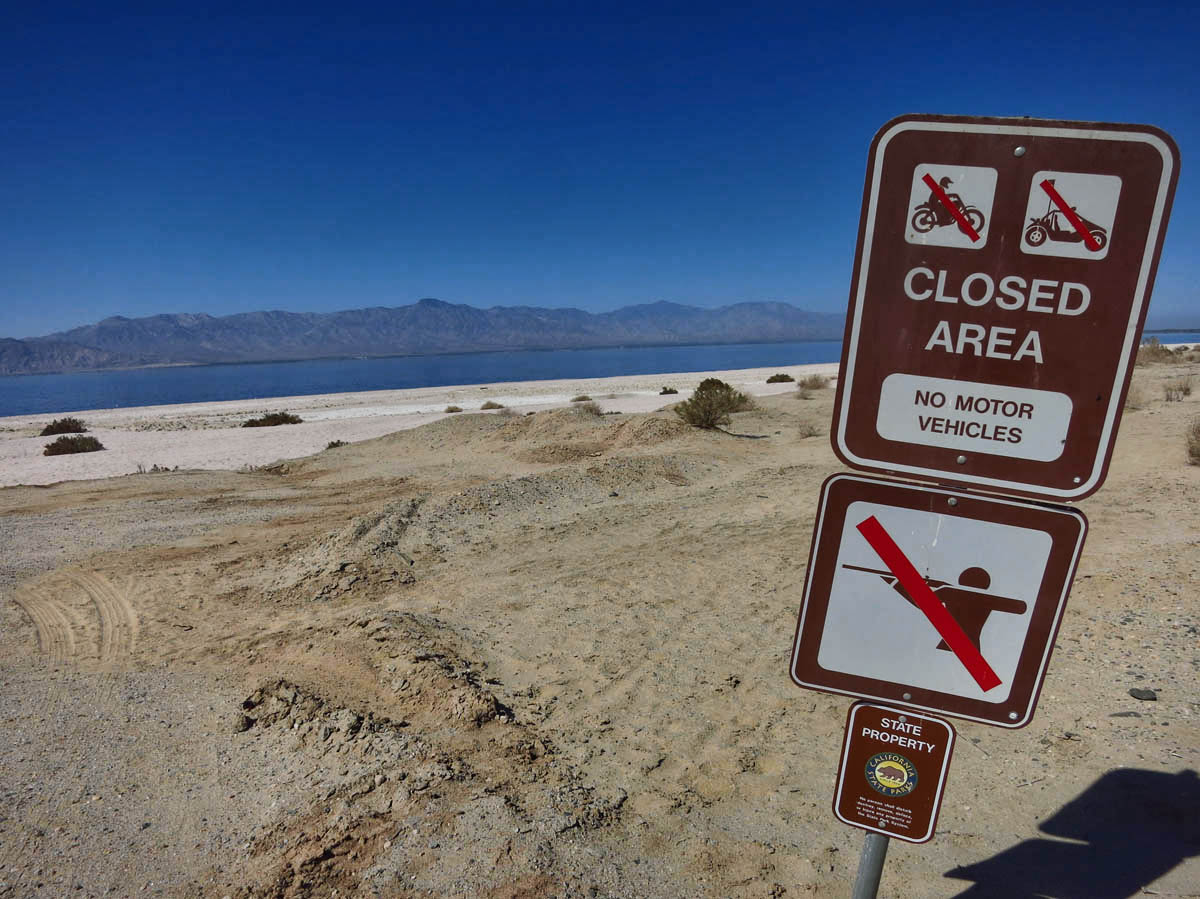 My first “no shooting” sign. Or maybe I am just more aware now?

I still love the Winnie as much as I did the first time I laid eyes on her. Aside from one “Check Engine” light and a blown Tracker engine, it’s been a smooth ride. I still remember my trip to the Hershey, PA RV show, when a salesman told me that 90% of RV owners don’t have the same RV they started out with after the first three years. But I’d make the same choice all over again.

I have enjoyed the additional conveniences that have made life easier, like my nice comfy custom mattress, my “no fill” AGM batteries, and my Bose Bluetooth Soundwave Speaker. And I still laugh every time I turn on my Tire Pressure Monitoring System, and think back to discovering on my maiden voyage, standing at the Love’s Truck Stop when I realized it was impossible to check the tire pressure of an inside dually. But by far, my greatest improvement over the past three years has been my solar system. It truly changed the way I live, and paid for itself in under a year. 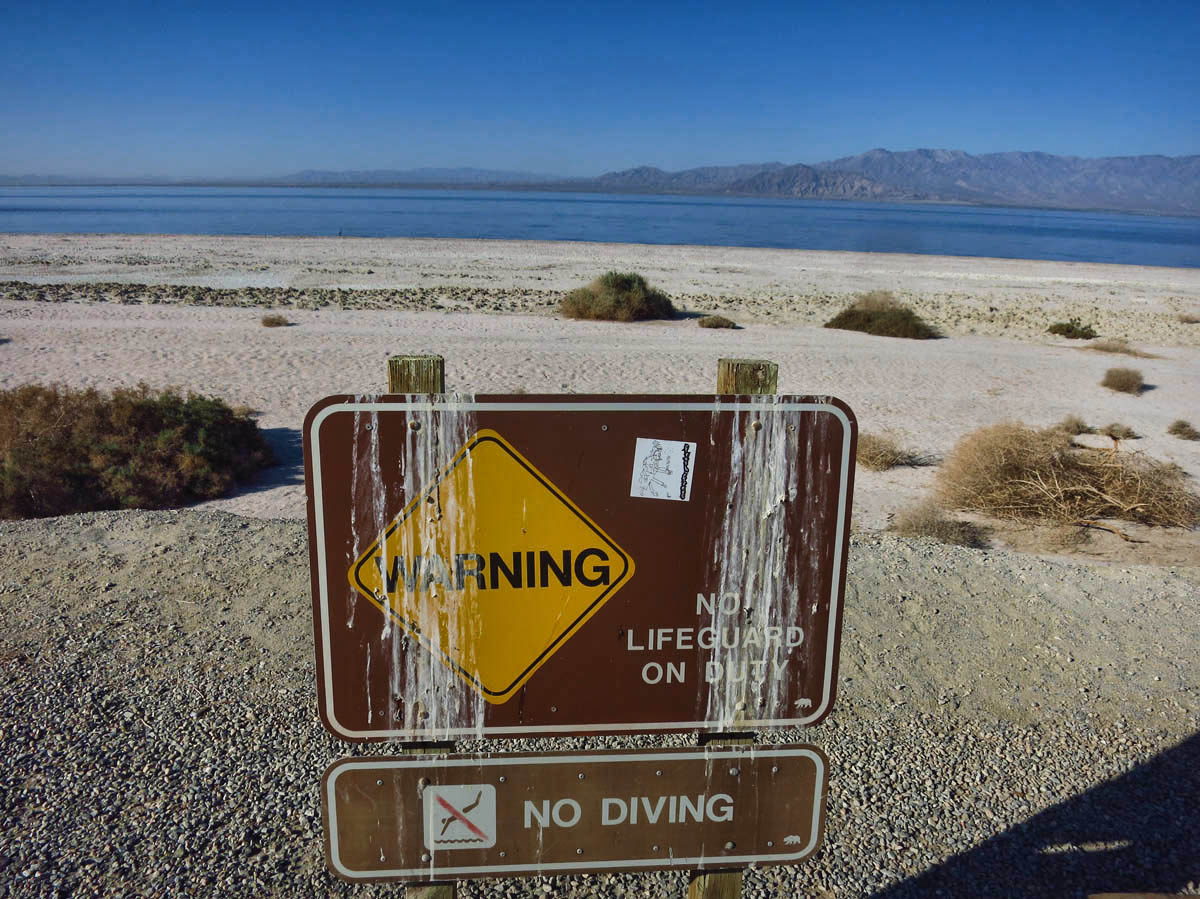 They must be joking, right? Who would dive into this brine? 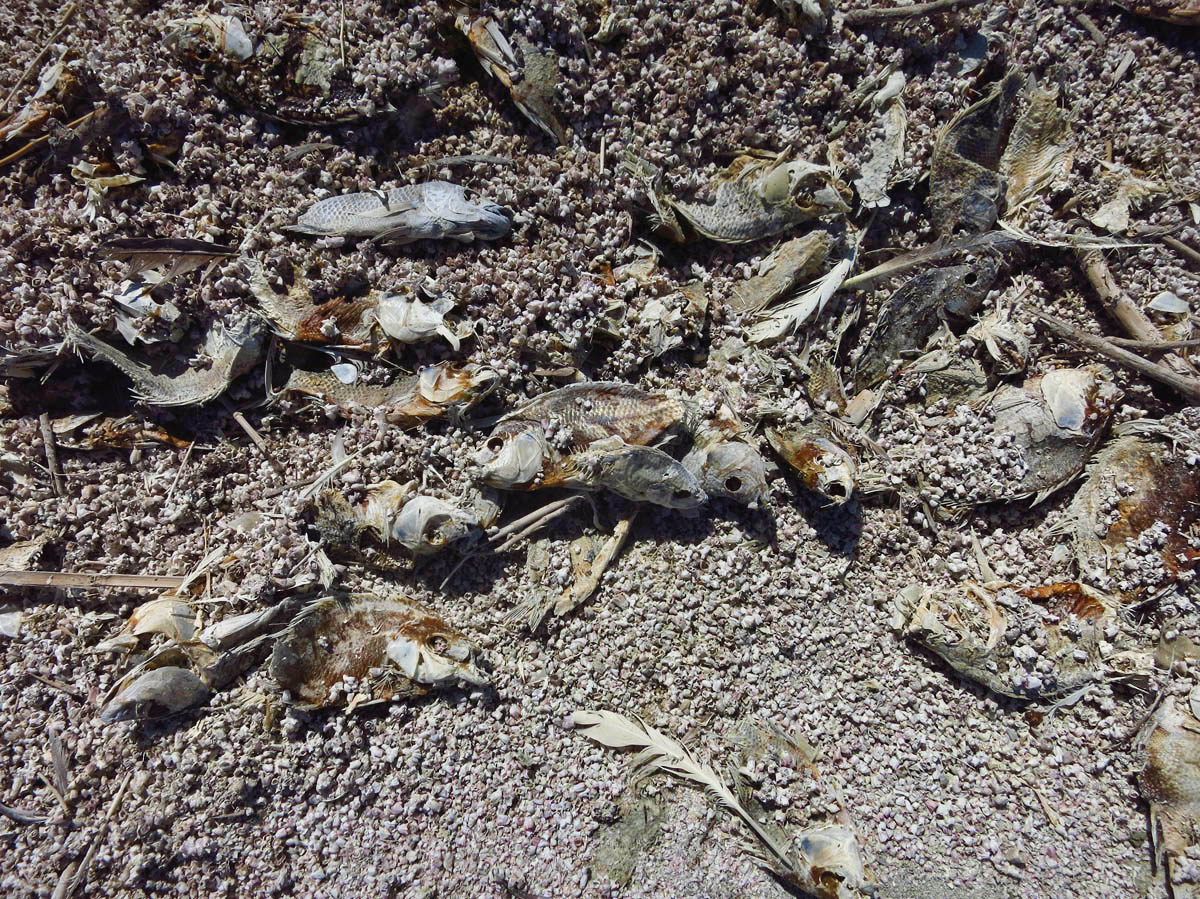 Closer to the shoreline, I find the source of the infamous Salton Sea aroma.

I have mastered many unforeseen skills in the transformation to nomadic life.  I can cook just about any meal I desire, from pasta to panko-breaded porkchops in one single frying pan.   I have mastered the art of surveying egress before turning into a tight space.  And I can turn my hair from frightening to fabulous in 15 minutes with five Velcro rollers.   I do my best shopping in thrift stores, as I soon learned that using public Laundromats means “disposable clothing.”

Still, there are skills I can’t seem to learn.  Like “sense-checking” my GPS.   Turning off the water pump when I leave the rig.  Retrieve the memory card from the laptop. 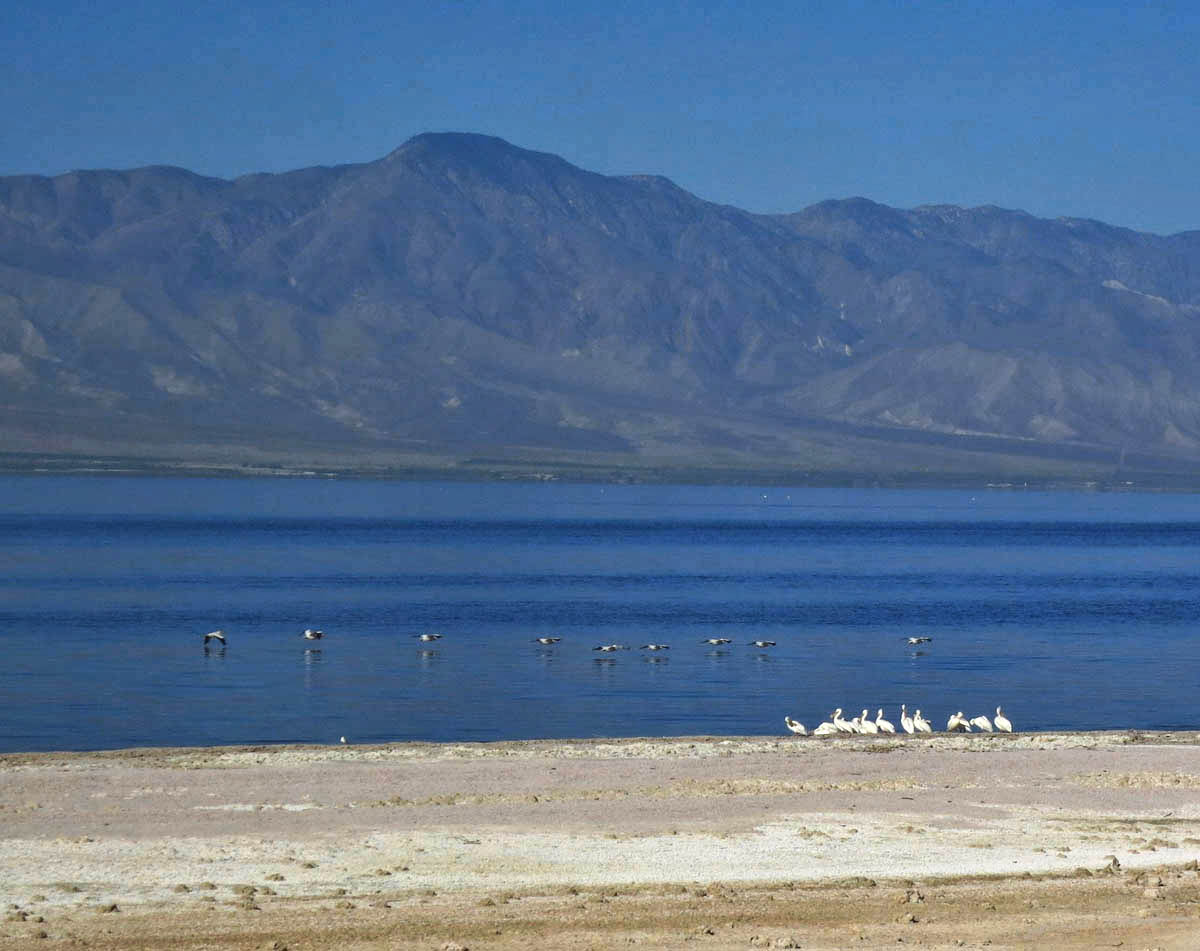 I only stay one night at the Salton Sea… 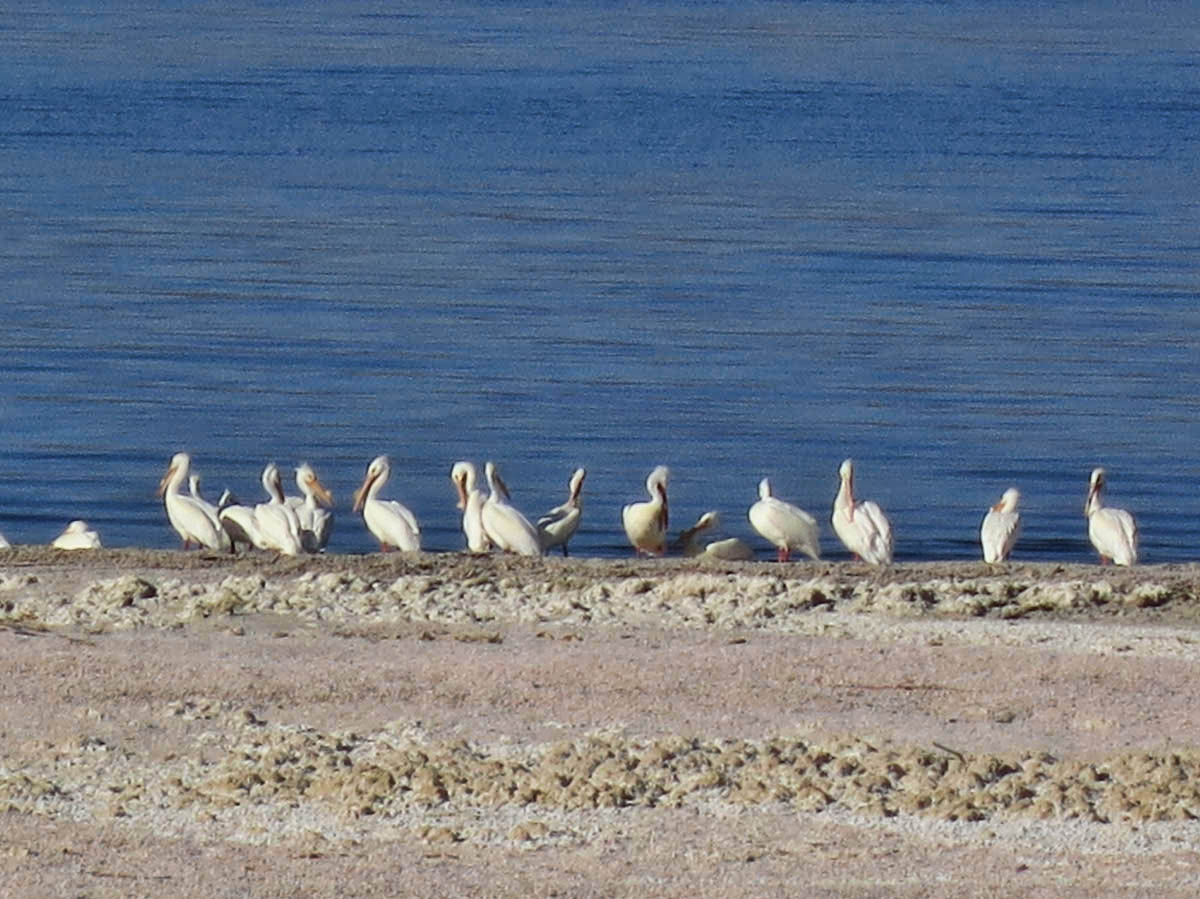 It’s not the stench that offends me. Nor is it the heat…. 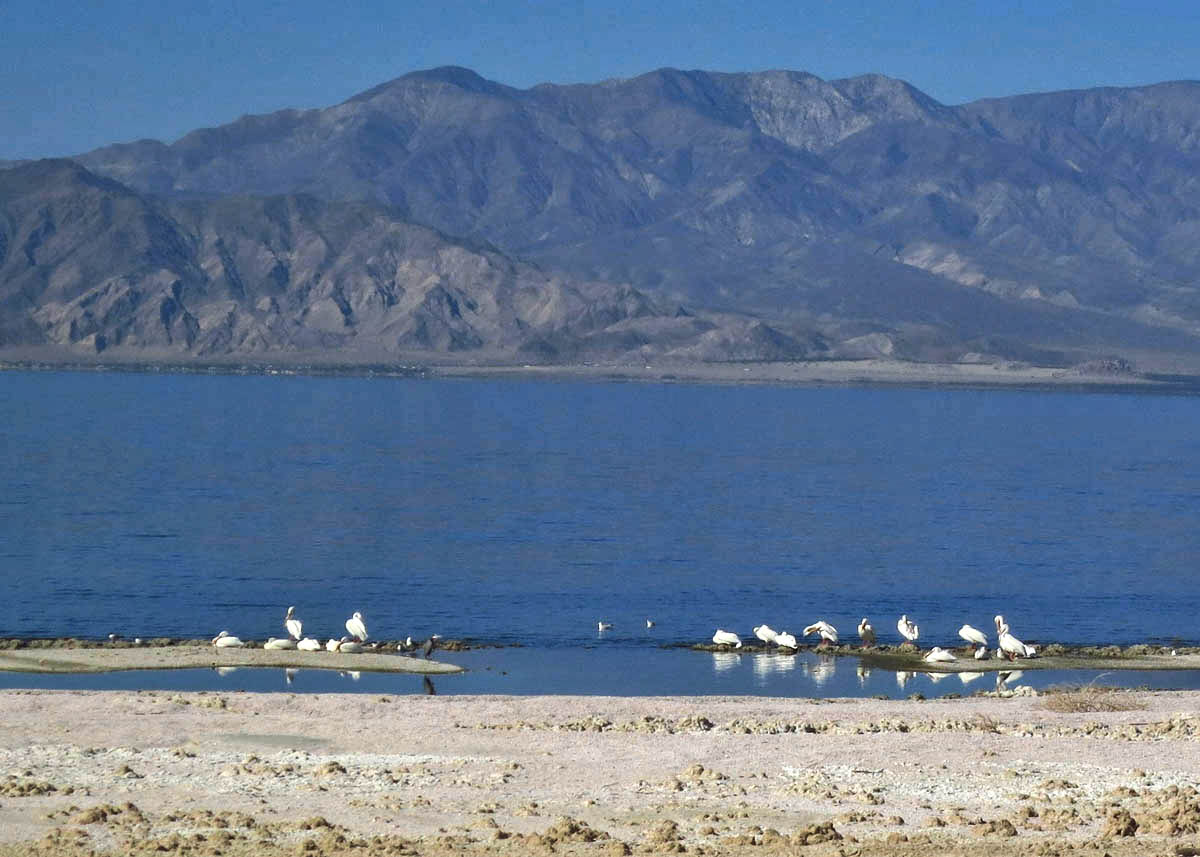 It’s the relentless, incessantly annoying flies that send me packing.

Many friends who have been at this much longer than I ponder their choices in the years to come.  What direction will their lives take, and is there more fulfillment to be had beyond full time on the road,  or “Is that all there is?”  The resurrection of spring seems to bring out self-reflection in us all.  But for me, I continue to be the insatiable “Kid in a Candy Store.”   Jimmy Buffet’s lyrics in “Changes in Latitudes, Changes in Attitudes”  continue to be my credo:

“Oh, yesterdays are over my shoulder,
So I can’t look back for too long.
There’s just too much to see waiting in front of me,
And I know that I just can’t go wrong”

Here’s to the next thousand days… 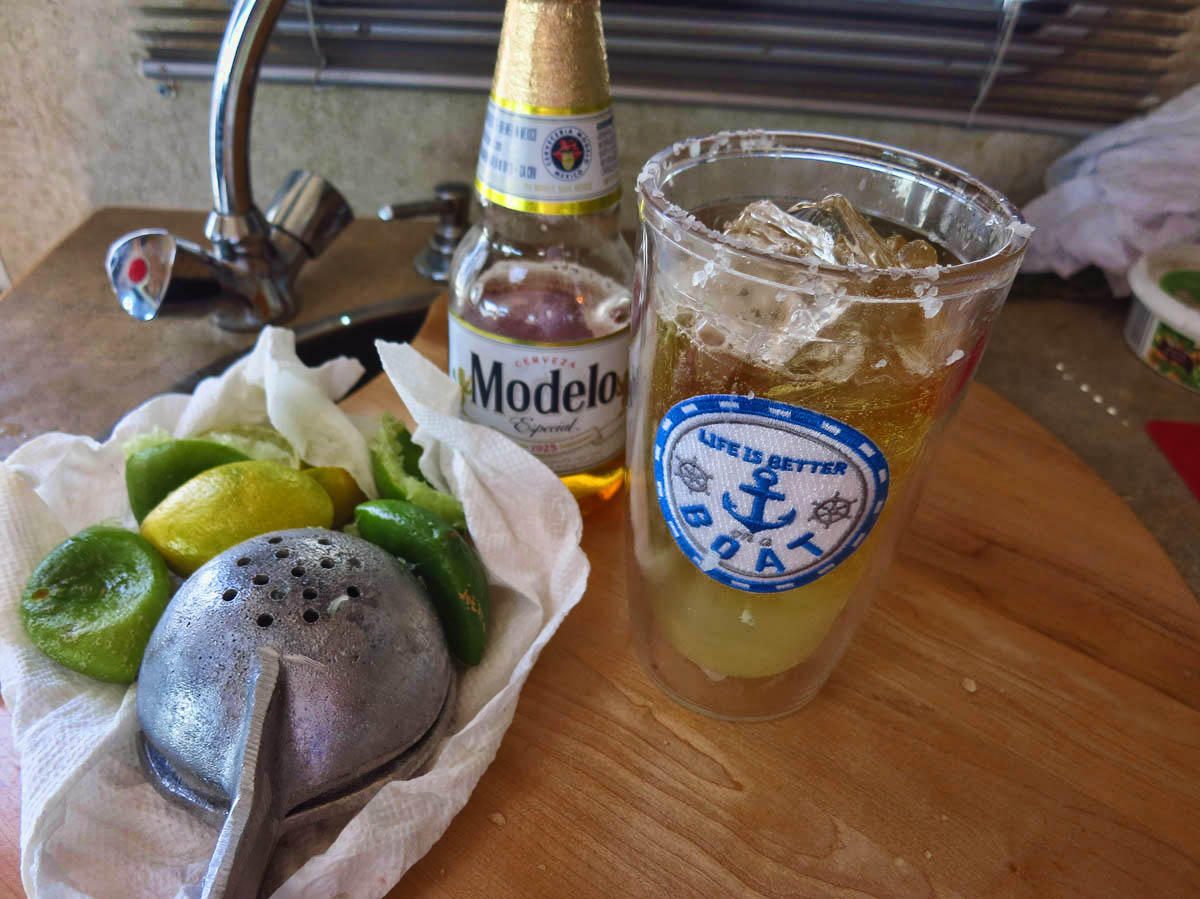 Still missing Mexico, I cool down with a Mexican Michelada.

32 thoughts on “The First Thousand Days”