Having moved from the thriving energy of Manhattan to “Fatlanta” in the “aughts decade,” I was pretty miserable. I had not yet established any relationships in Atlanta, and missed my lifestyle back in New York so badly it hurt. I was now owned by a 3 bedroom beige ranch-style home, and confined to house arrest by an imprisoning job. I would sit at my desk with the only 3 x 3 window in the room at my back, and stare at travel pictures on my “Wall of Inspiration.”

My best New York friend Brian had lost his job, also due to the downward spiral that put so many of us Manhattanites out of a job after 9/11. Brian and I would exchange emails about the fun times we’d shared, racing J24 sailboats up and down the Hudson River, sailing charters in the British Virgin Islands, cross country skiing in Lake Placid. Those emails would always end in the same tag phrase, “aaaaahhh….those were the good ole days!”

It was during one of these email exchanges with Brian that it hit me. What am I doing right this red hot minute….right NOW to insure that 10 years from now, I look back on this time in my life and say the same thing? “aaaahhh…those were the good old days!” It was the beginning of the end of my traditional lifestyle. From that point on, I made it my mission to take responsibility for my own happiness. To create something good and playful in my life. I began hiking and camping every weekend. I joined a local Atlanta sailing club. And I started making plans to rid myself of what was left of a 30 year mortgage and enough “stuff” to last just as long.

Ten years later, I look back on that time and realize it was an epiphany that changed my life for the better. I stop often now to check in and ask myself, “Will these be the good old days?” If the answer is “no,” then I need to make a change.

I share many passions with Jim and Gayle. Hiking and biking. Craft beer sampling. But probably the least talked about is our mutual love and taste in music. Every encounter nets me a new playlist. So on this gorgeous day in Mojave Preserve, as we head out to play in the high desert dunes, we have about an hours drive ahead of us. Jim picks us out a playlist…coincidentally, songs from that same “aught decade.”

So queue up Israel Kamakawiwo’ole’s ukulele in “Somewhere Over the Rainbow/Wonderful World.” We’re off to play in the Kelso Dunes! Aaaaaahhh, yes, these ARE the good ole’ days! 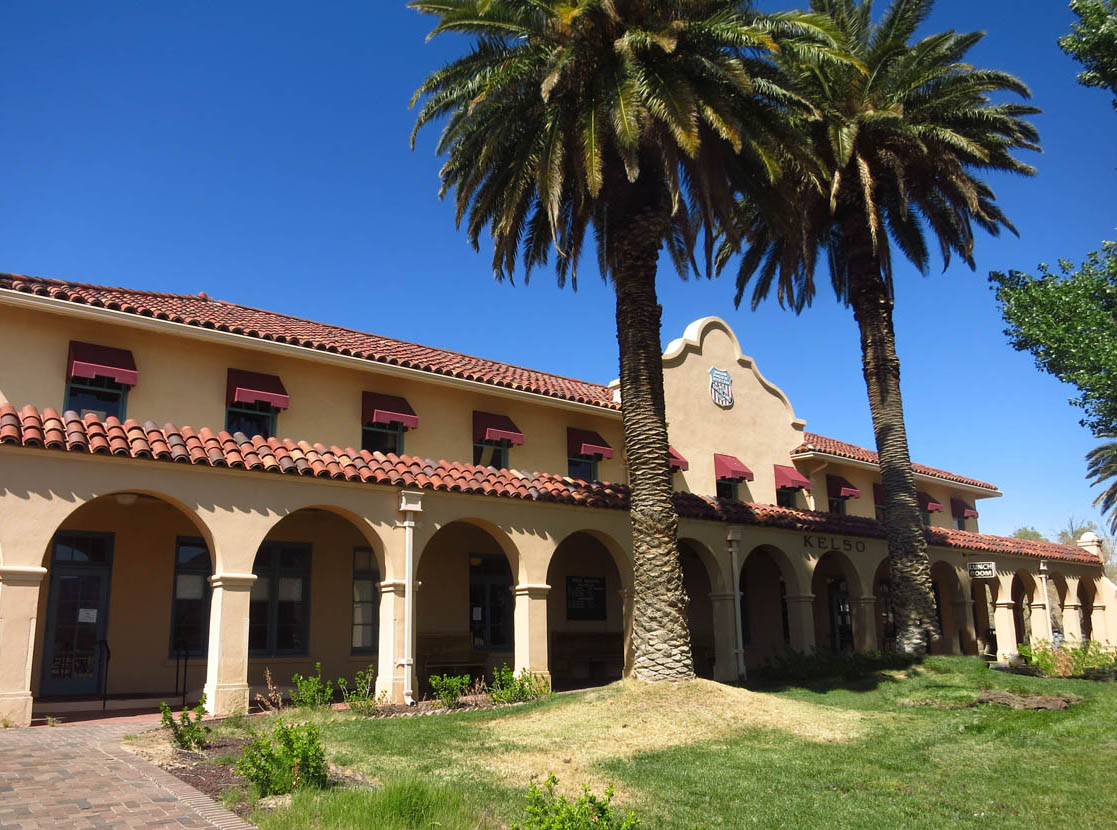 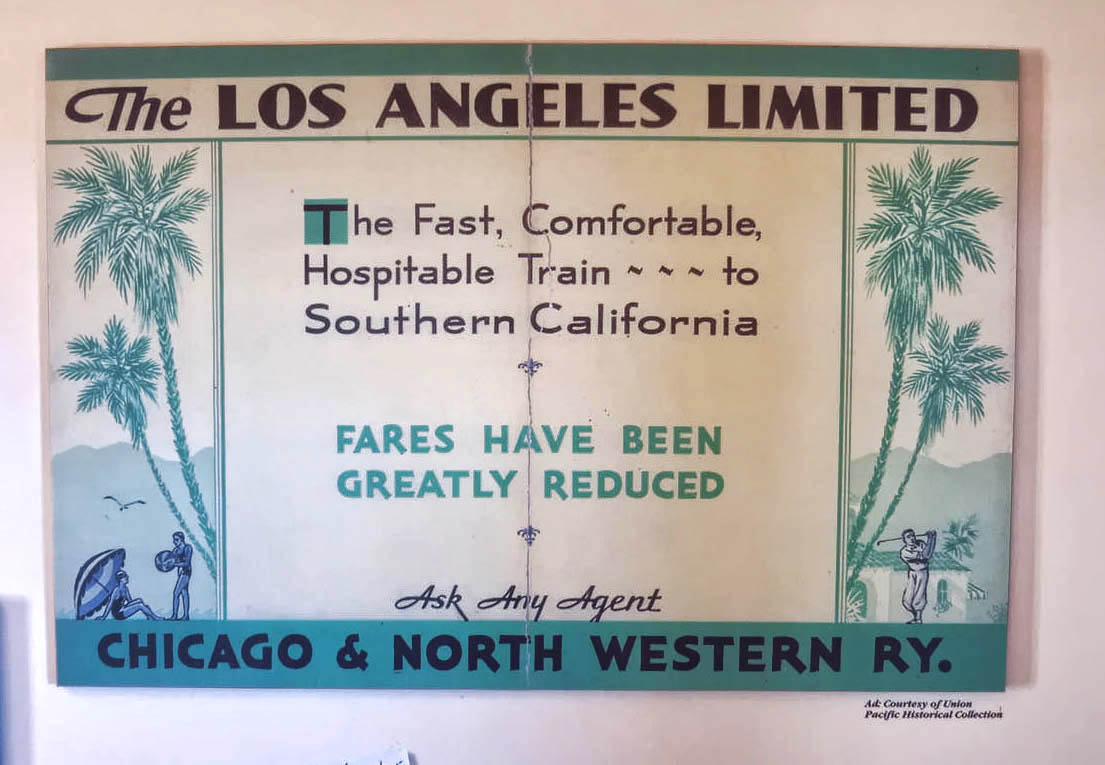 Kelso Depot has a nice display of railroad memorabilia. Just don’t ask the tall, dark and handsome Ranger about any of it. He’s there for looks only. 😉 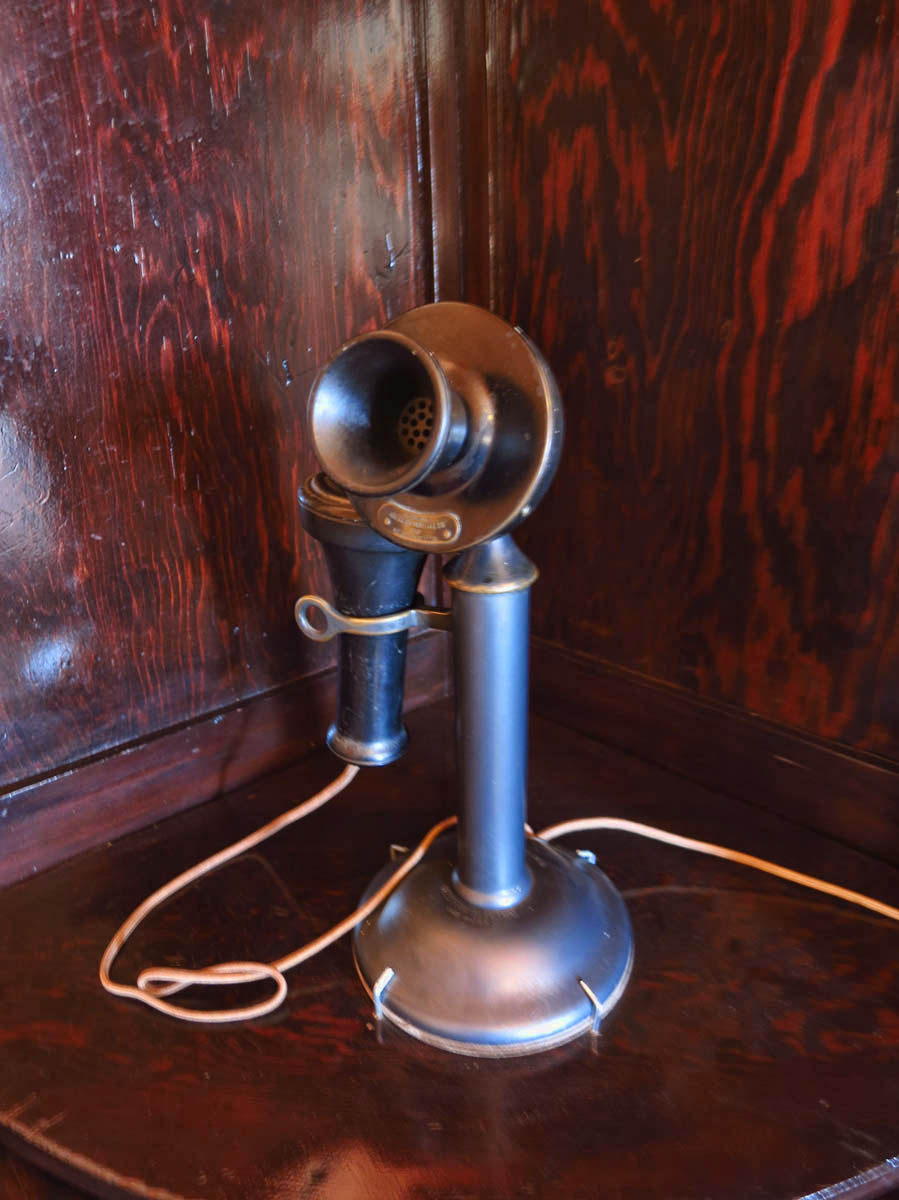 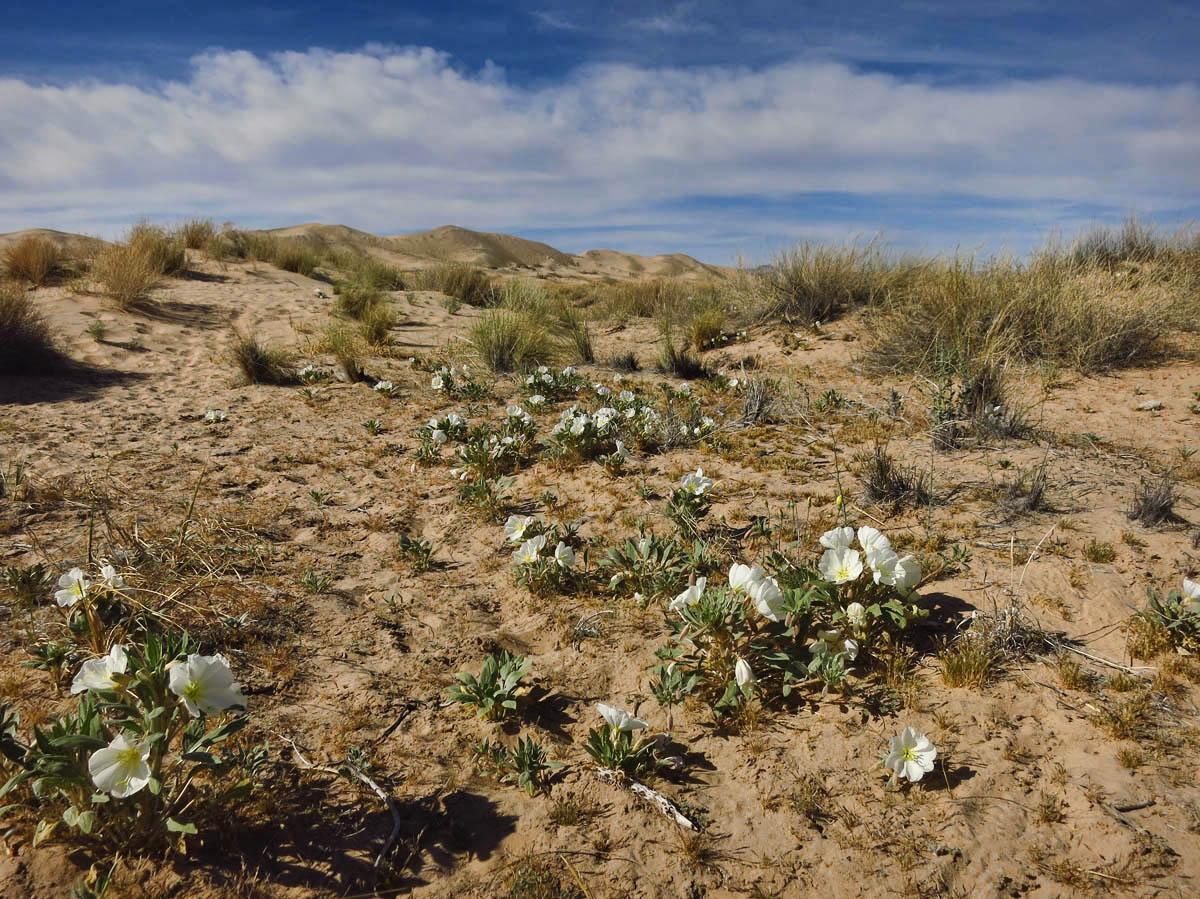 Evening Primrose are prolific over the lower areas of Kelso Dunes 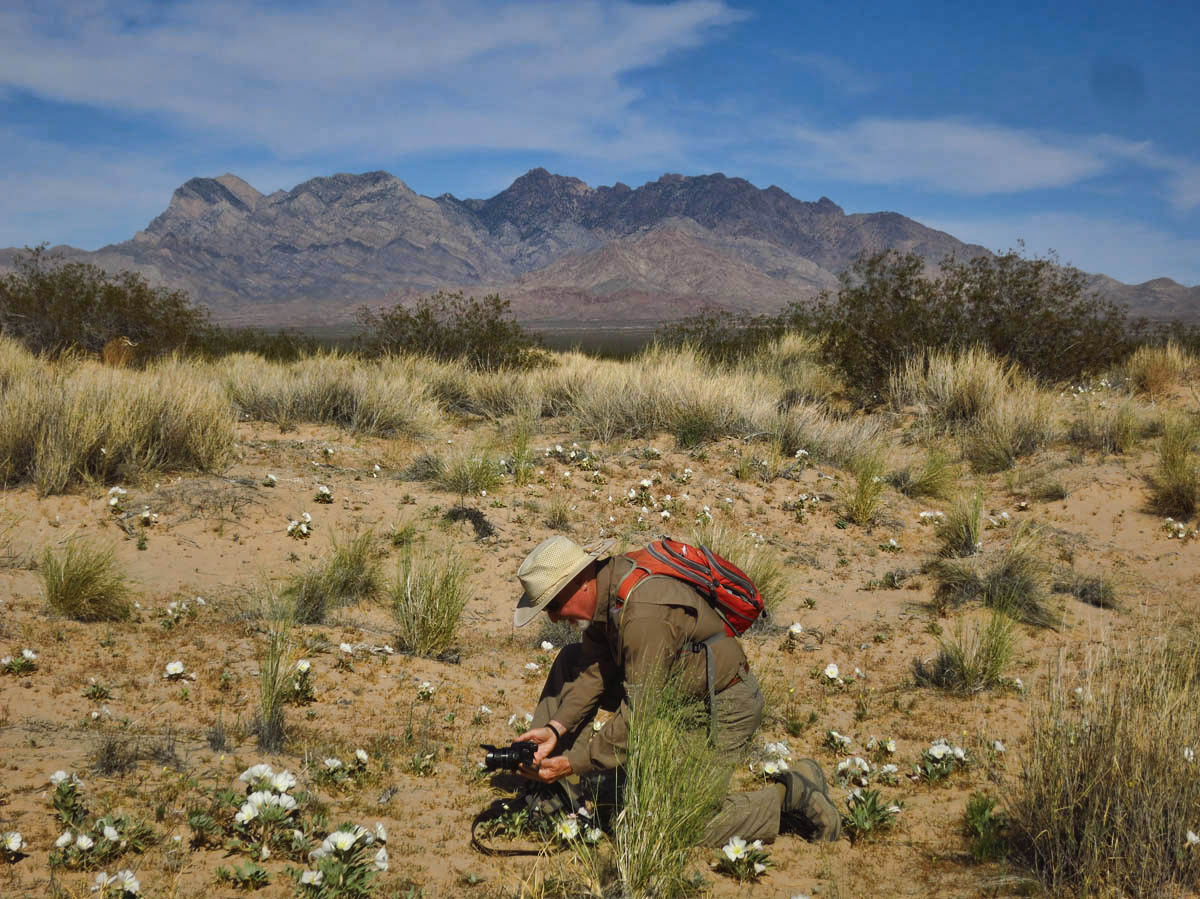 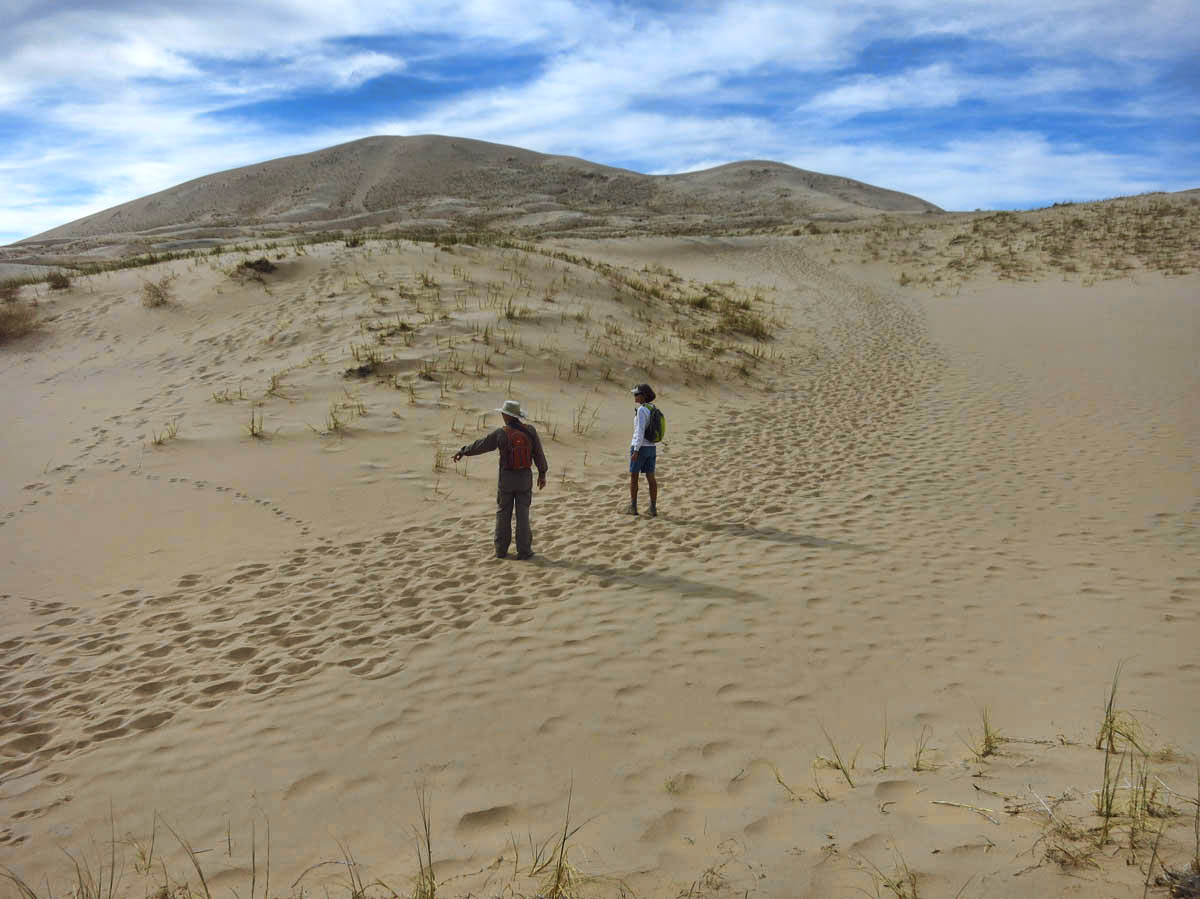 Kelso Dunes were named after the town, Kelso, which was named after a railroad worker. They put 3 worker’s names in a hat to draw for the name of the town, and Mr. Kelso won. 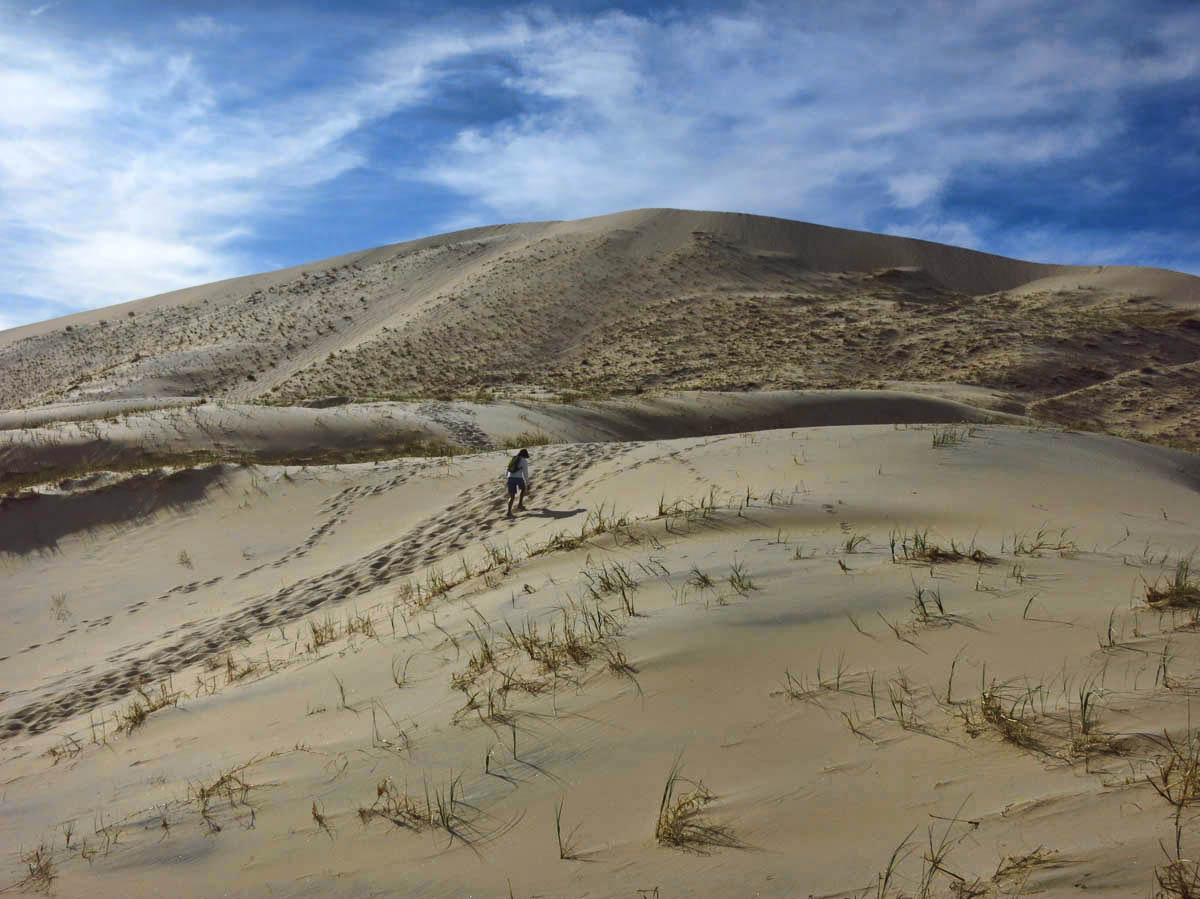 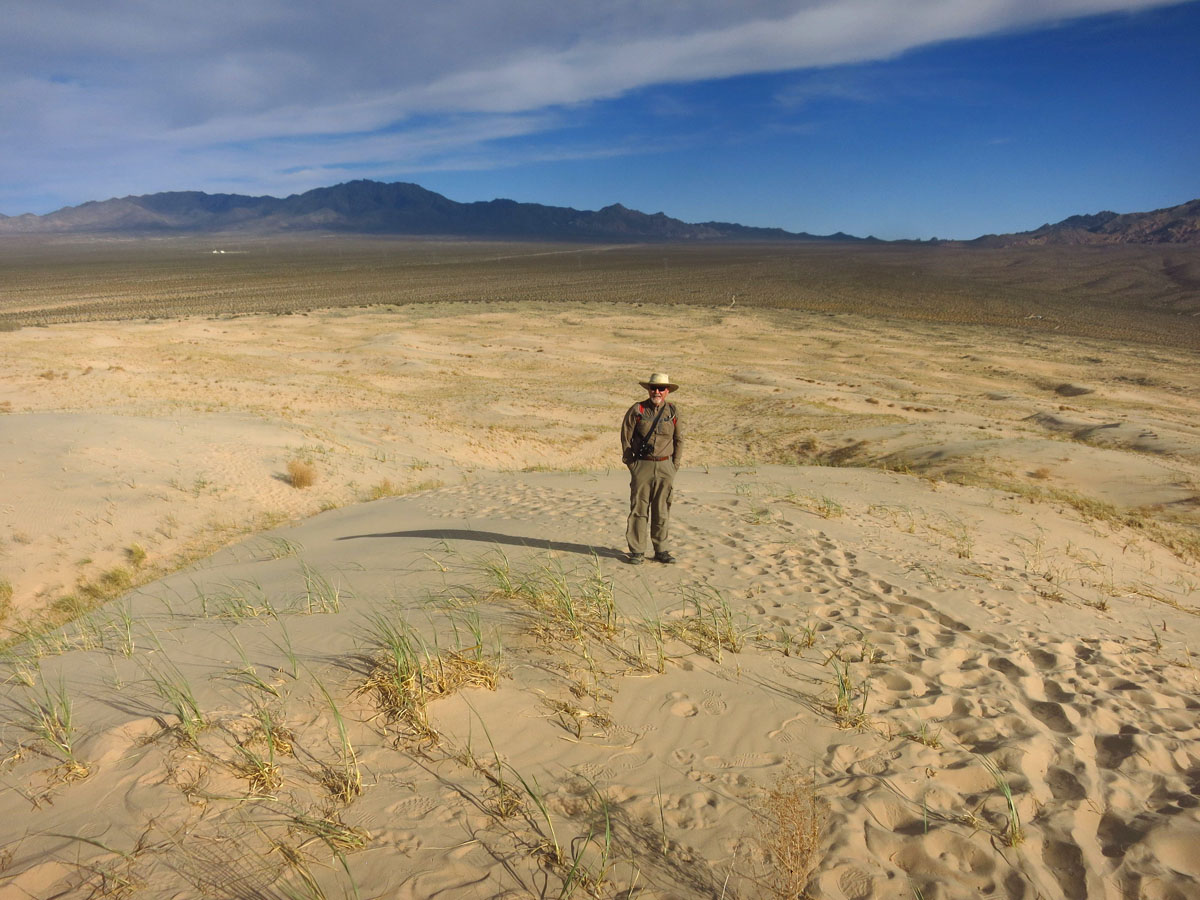 This is Jim’s protest stance. “You know? I think I’ve seen enough.” 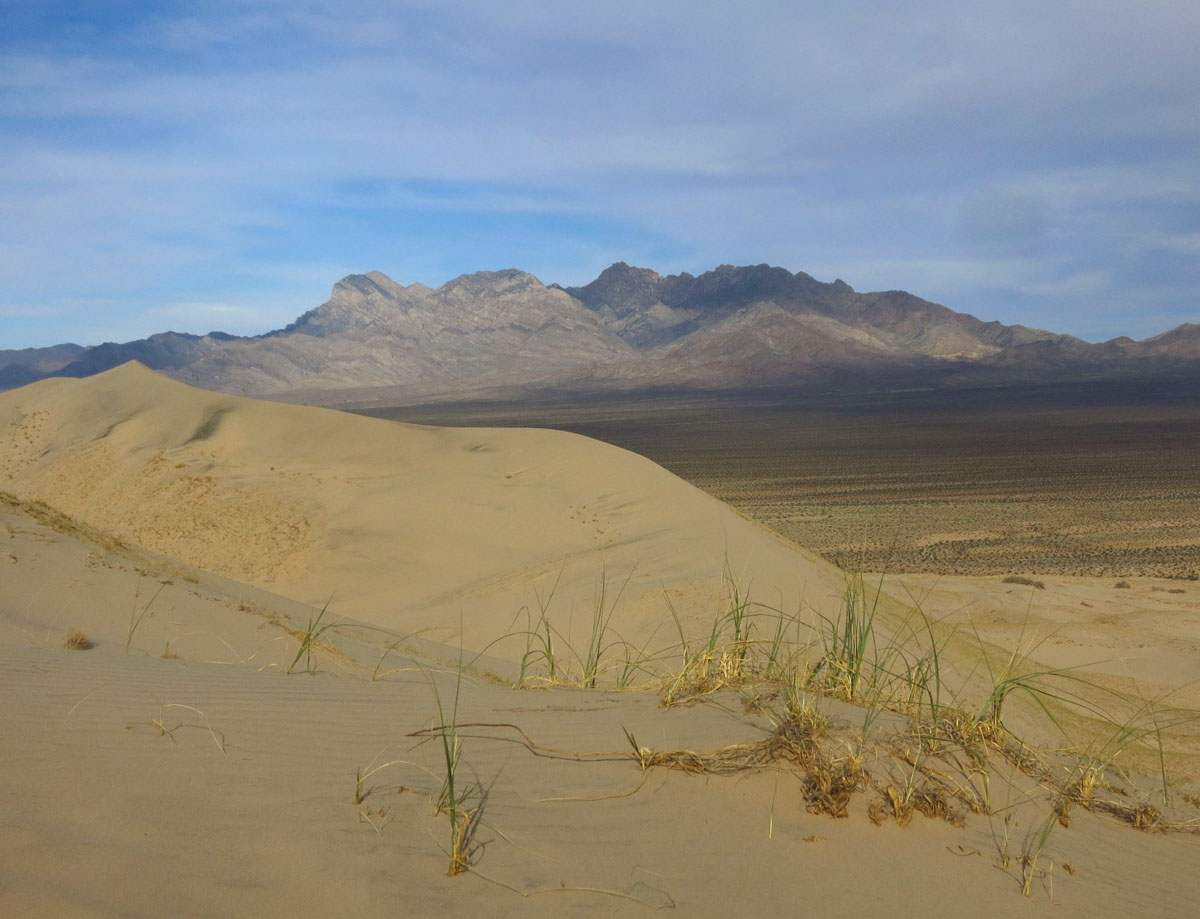 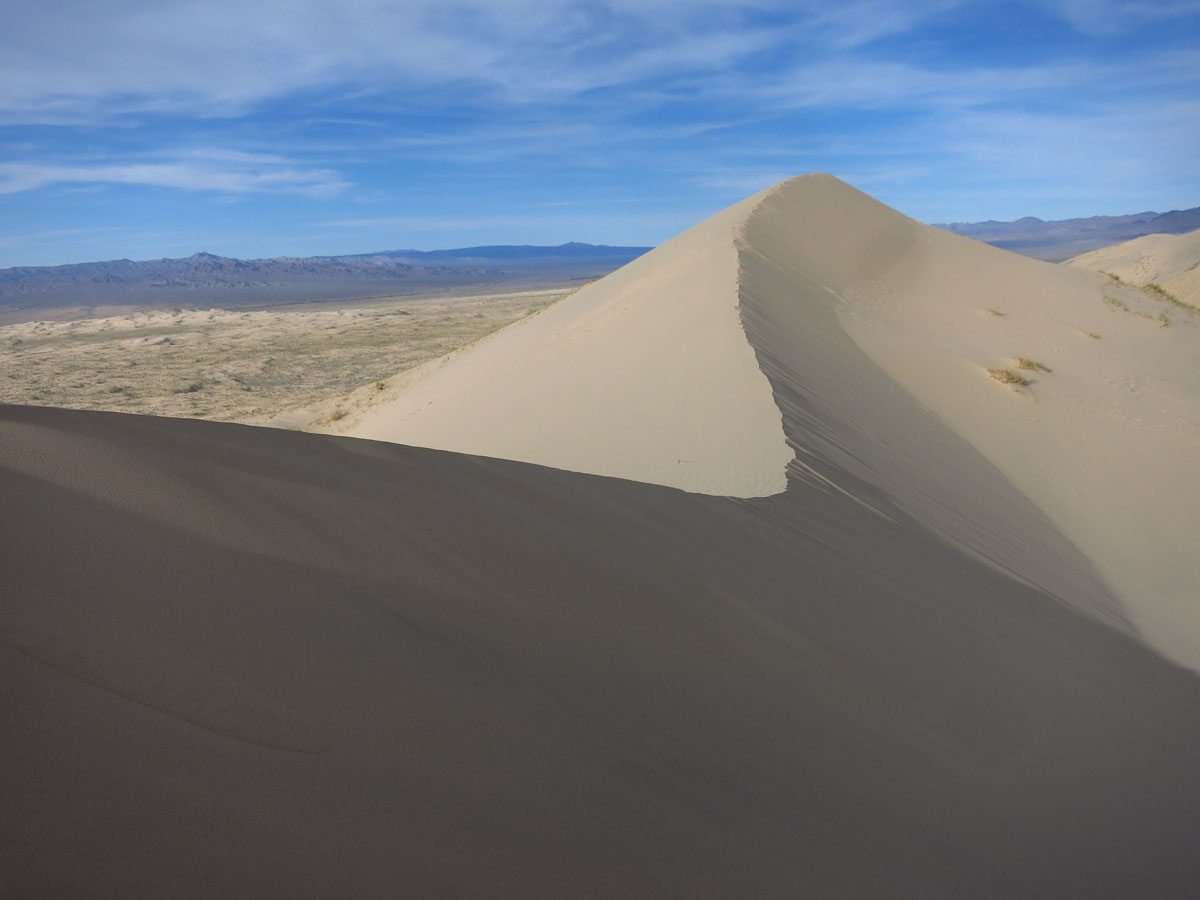 The beautiful slip-face, my favorite part of the dune. 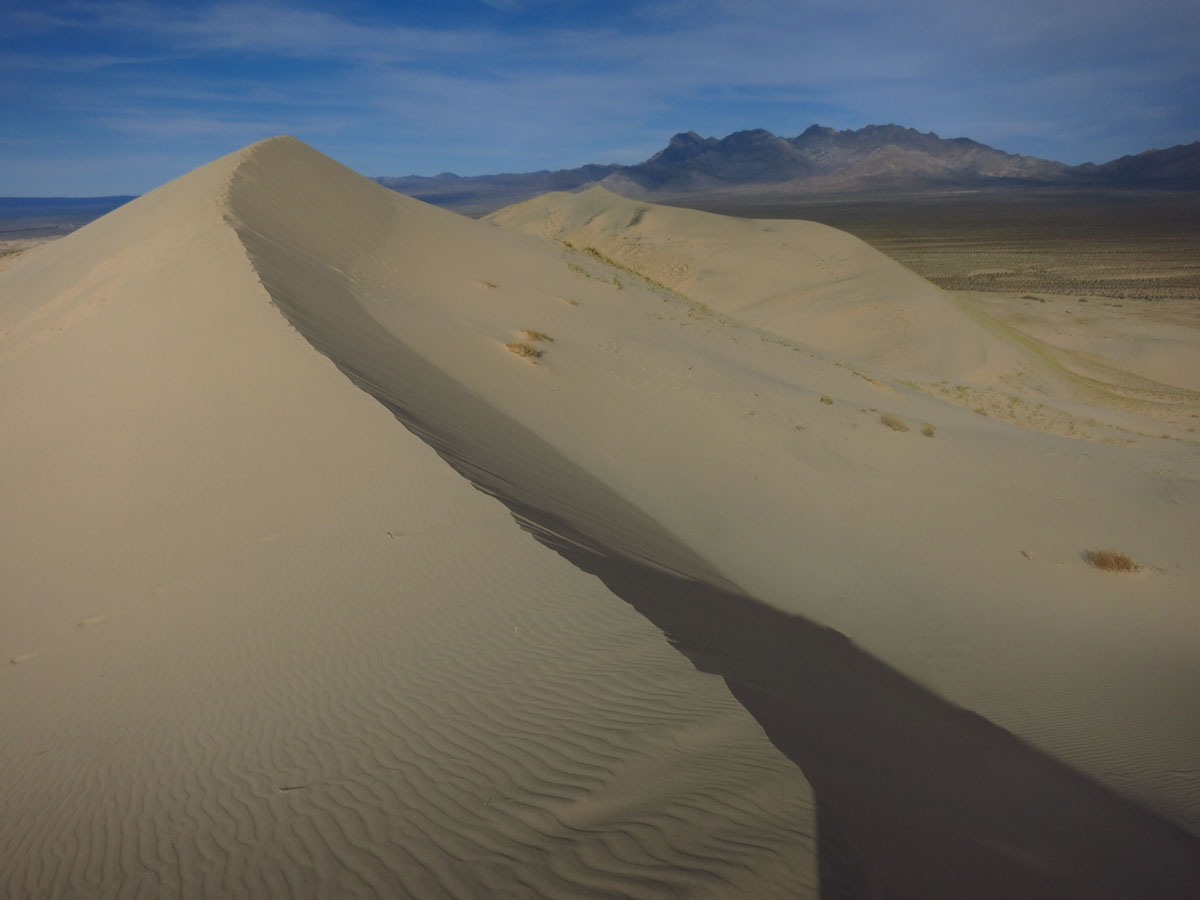 The Kelso Dunes are known for their “singing,” or “booming. 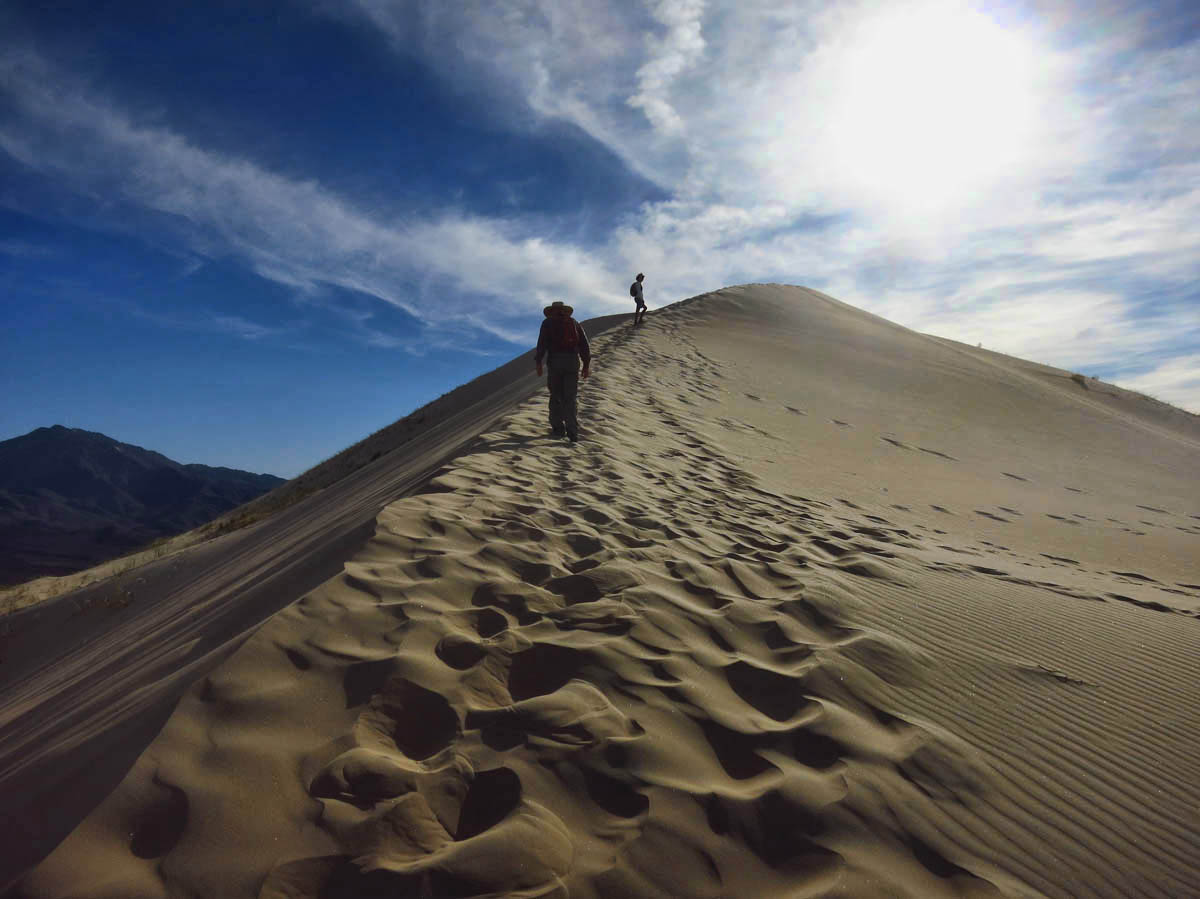 This phenomena of “singing dunes” needs three criteria to resonate. 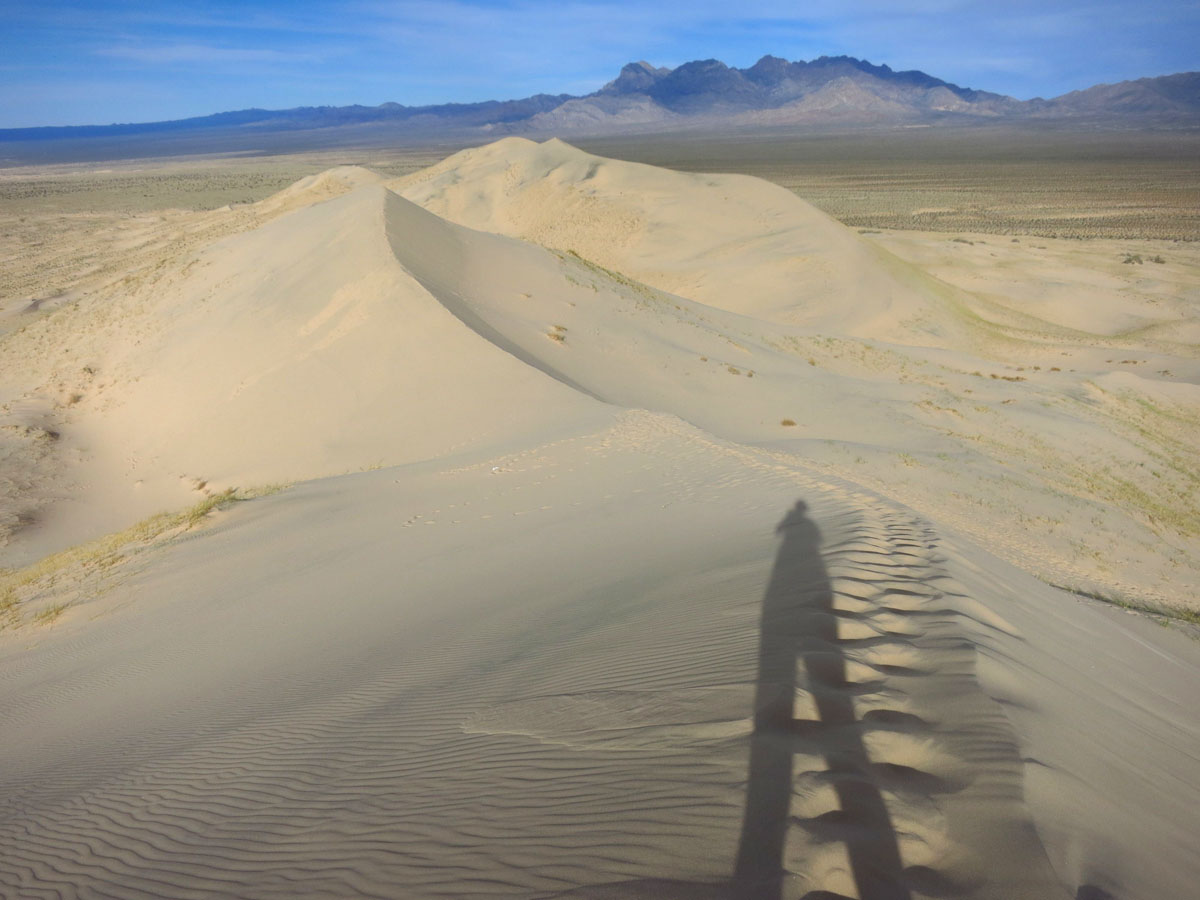 The sand grains must be round and of a certain diameter, must contain silica, and must be at a certain humidity level. 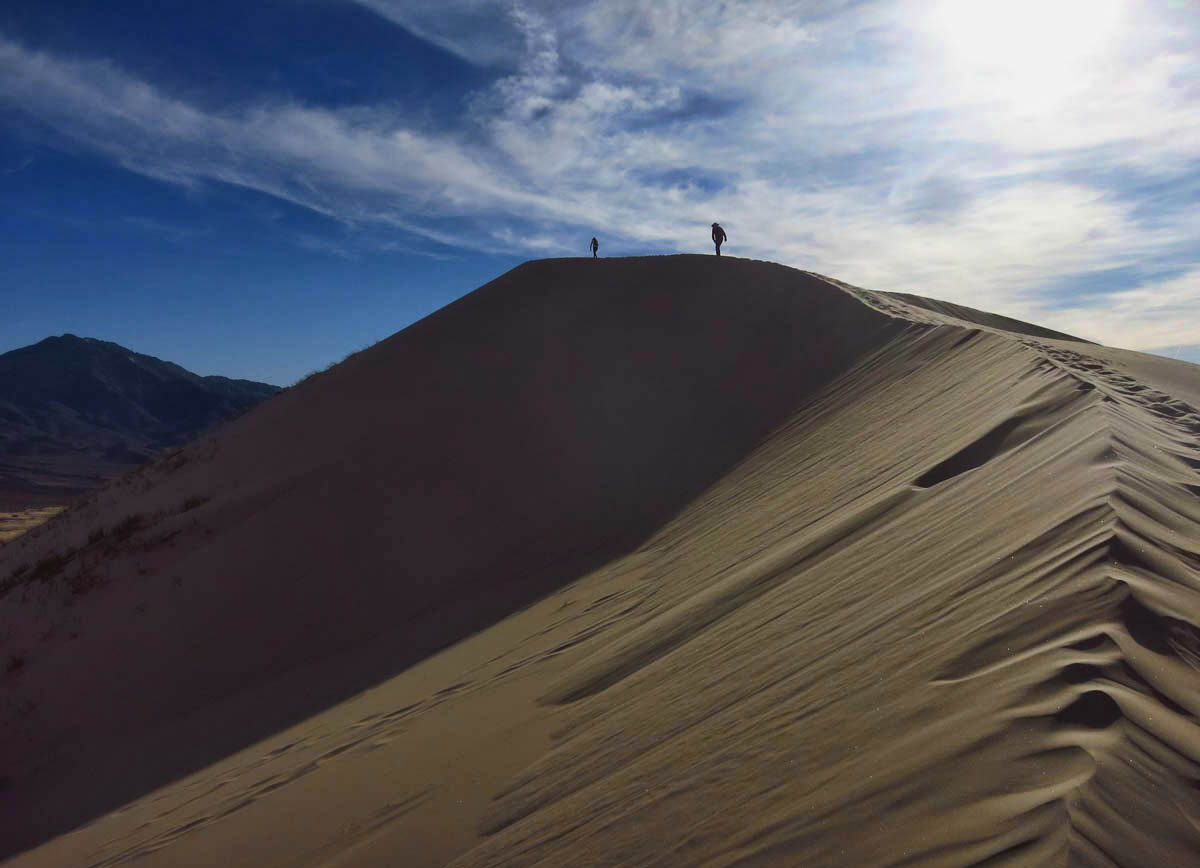 The noise may be generated by friction between the grains or by the compression of air between them. 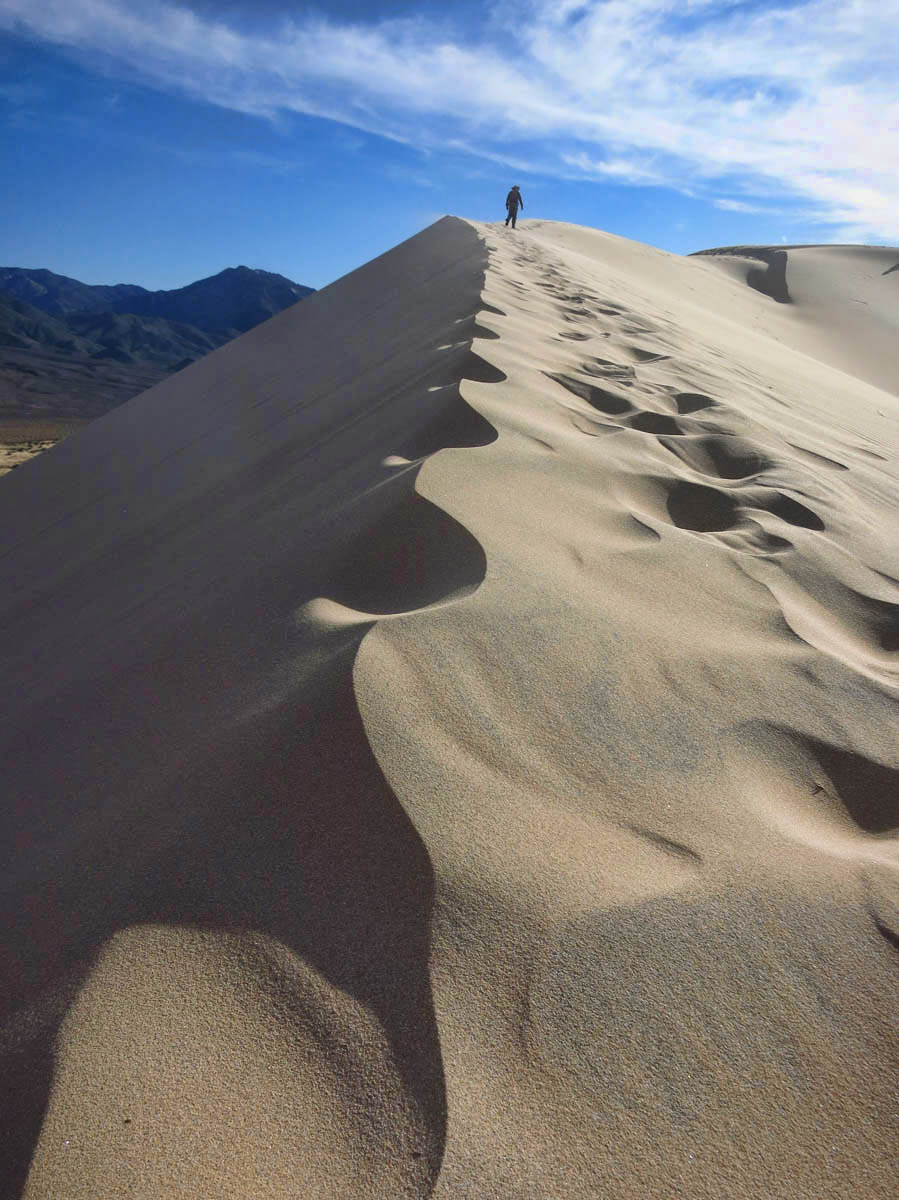 This “singing” or “booming” occurs when you cause sand to fall or cascade down the slope. 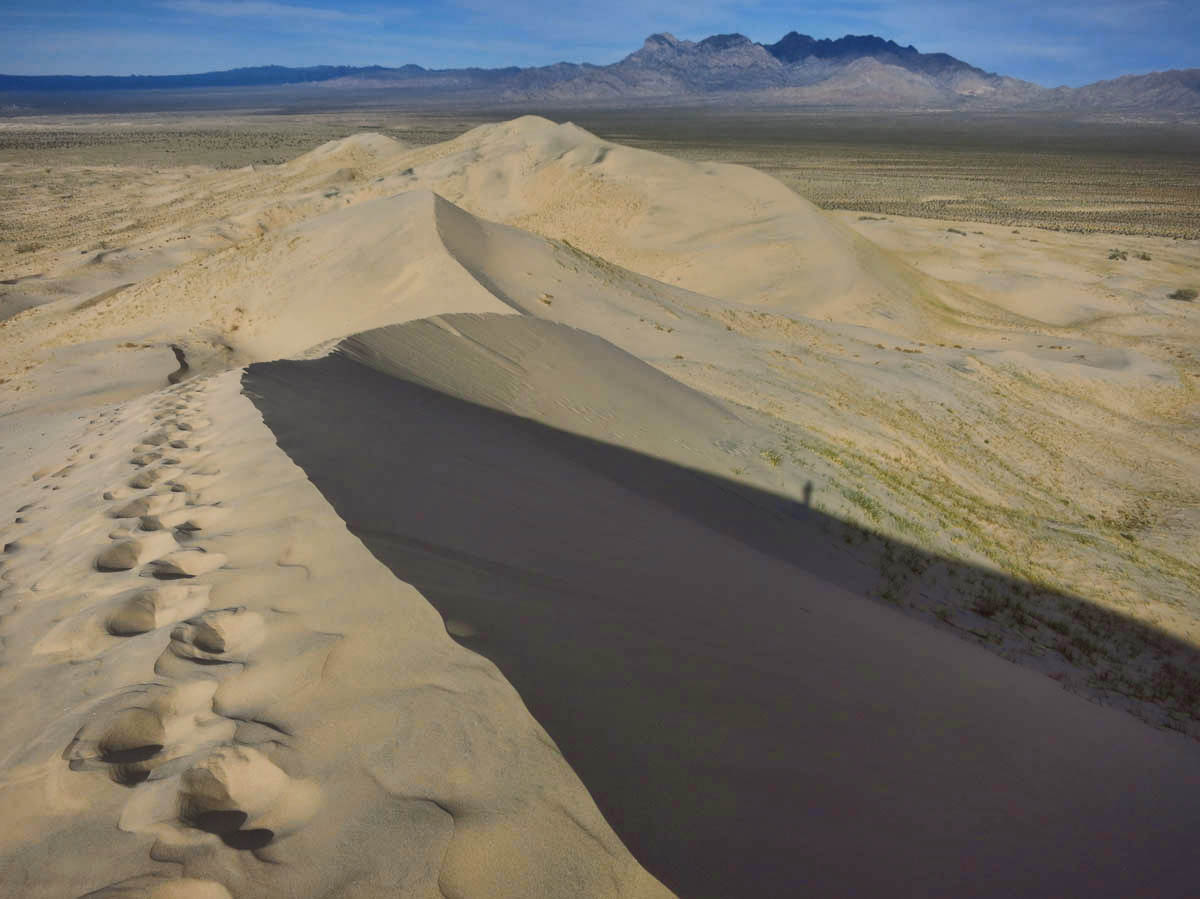 Internet sources say only approx 35 dune fields in the world have the right conditions to “sing.” 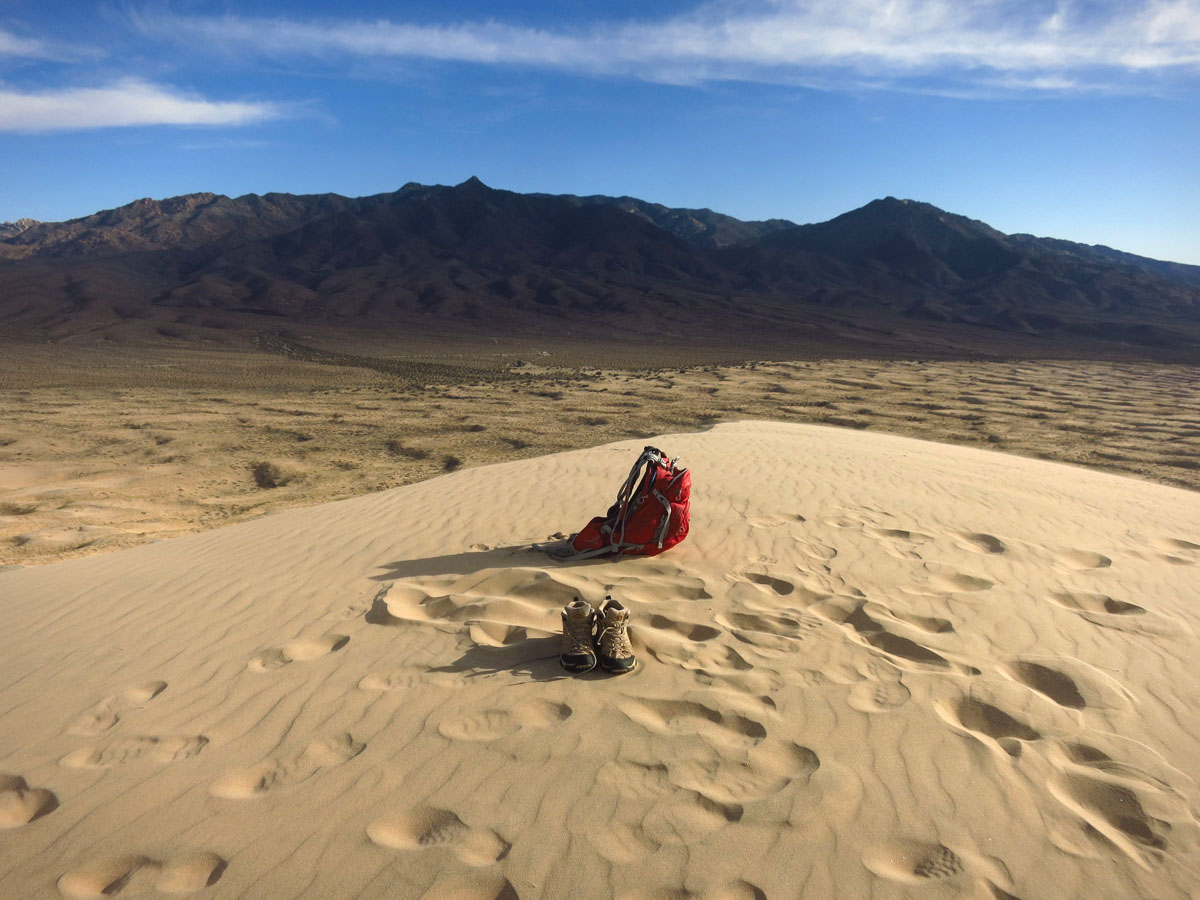 Couldn’t come to the top without feeling the sand between my toes. 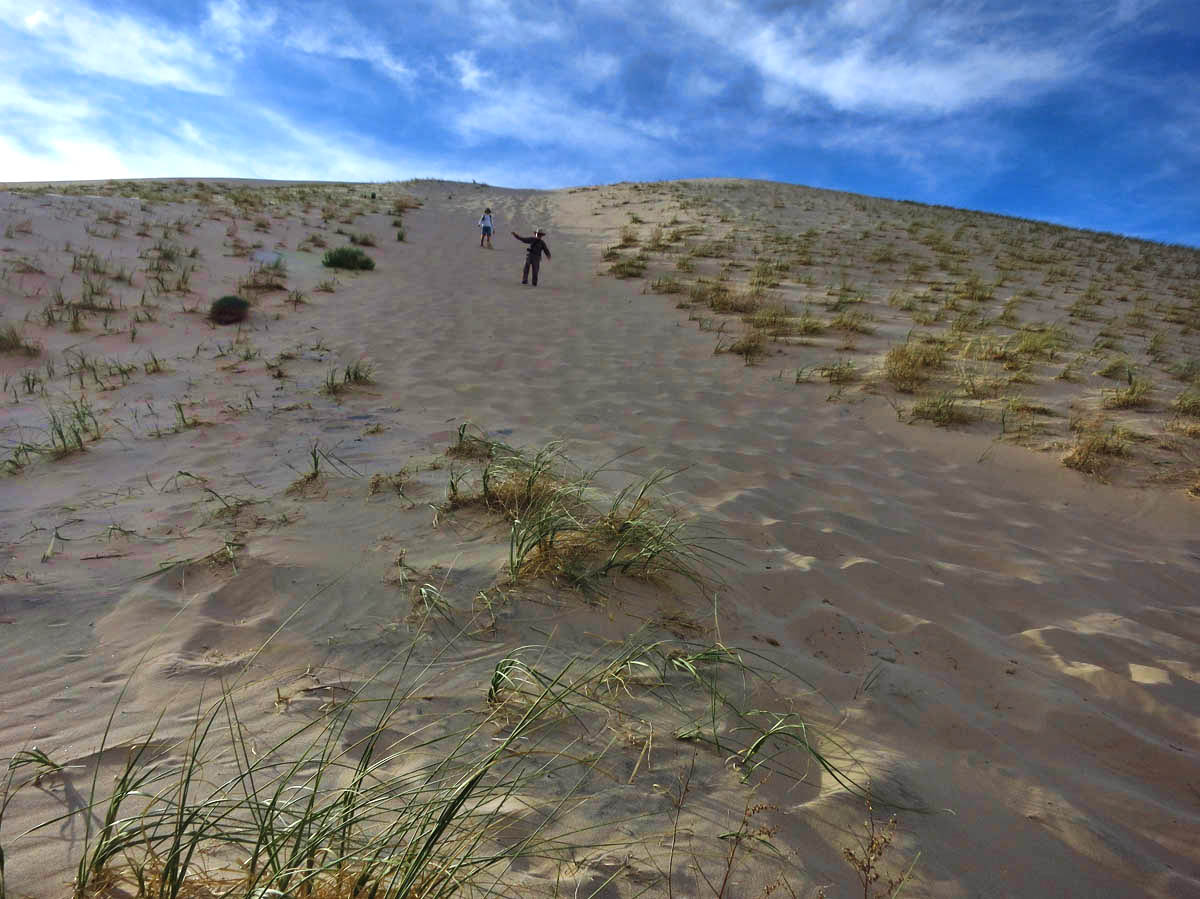 This hill is much steeper than it looks, so much so that we could not see the bottom while standing at the top,. 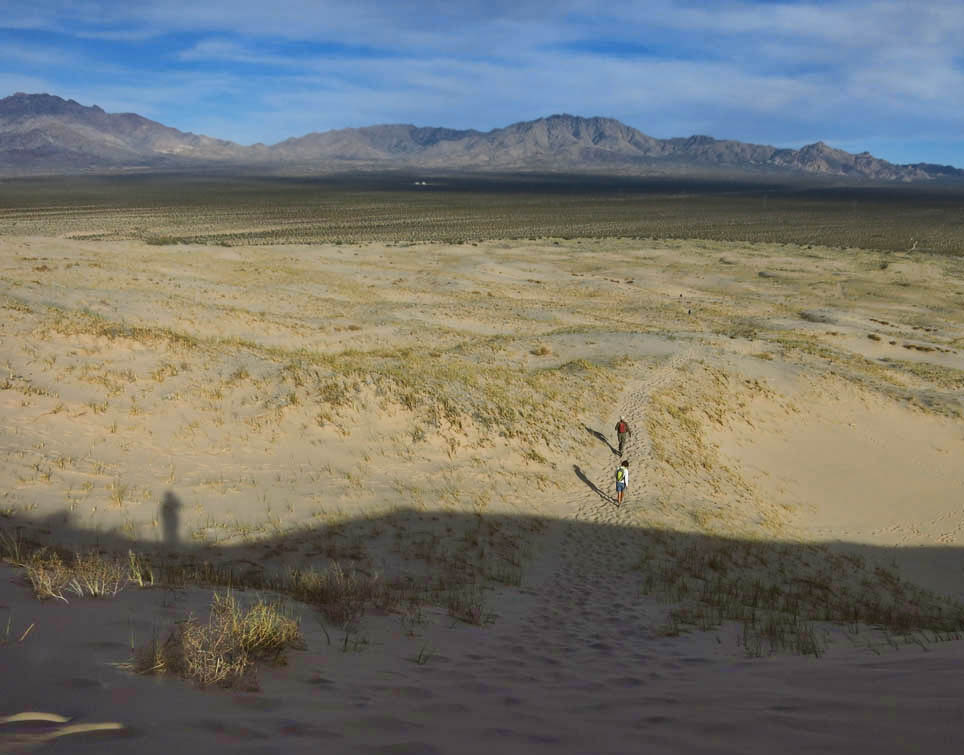 Running or jogging down these dunes is an ALL OUT BLAST!! 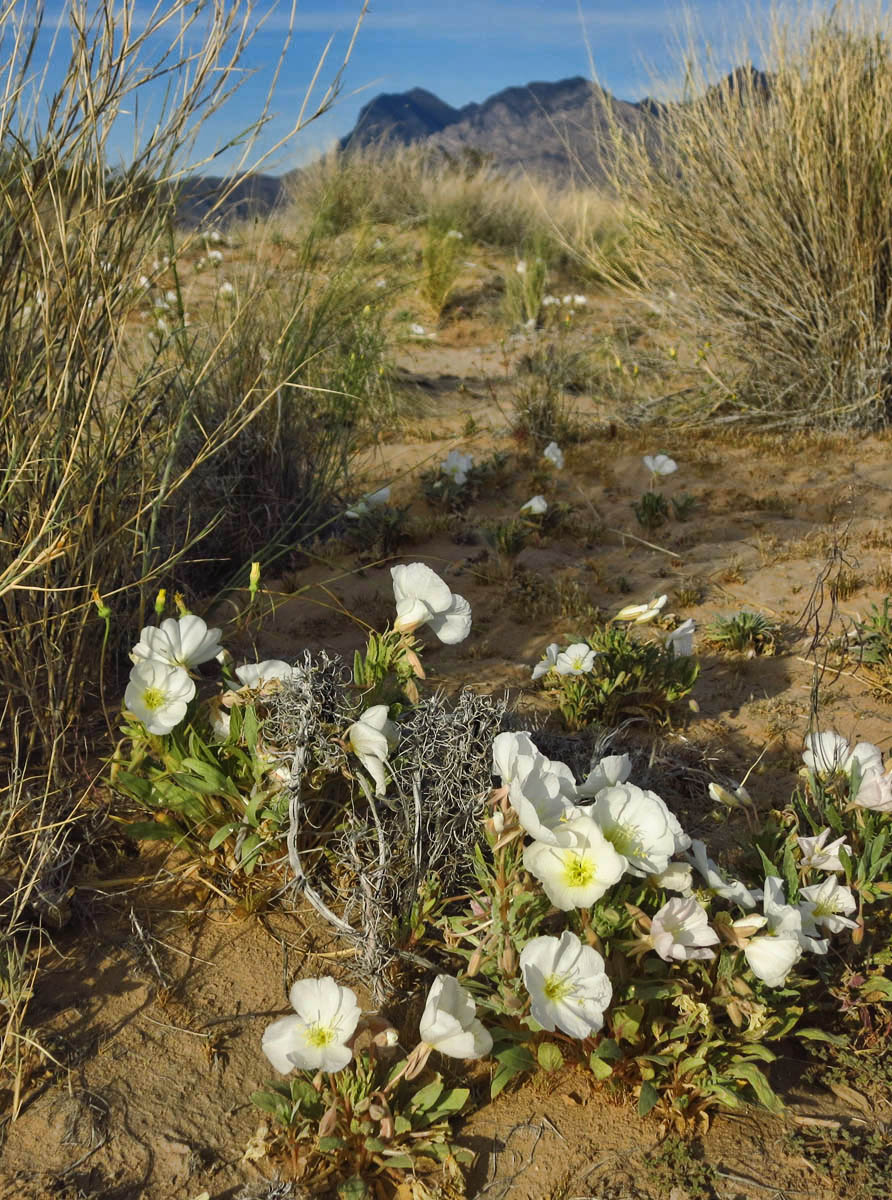 So much beauty in this desert!

“For the past 33 years, I have looked in the mirror every morning and asked myself: ‘If today were the last day of my life, would I want to do what I am about to do today?’ And whenever the answer has been ‘No’ for too many days in a row, I know I need to change something.”

17 thoughts on “These ARE the Good Ole Days!”