Yet another reason for my road trip, I had booked space in San Simeon State Park far in advance to be guaranteed of a place to park for Memorial Day Weekend.  Had I cancelled that space due to the Winnie repairs, I would have lost both booking fees and cancellation penalties, consuming the majority of the refund.   Since the reservation was for the “primitive” campground (Washburn, dry camping on the grass with no hook-ups,) I figured I could get by with pitching my tent there. 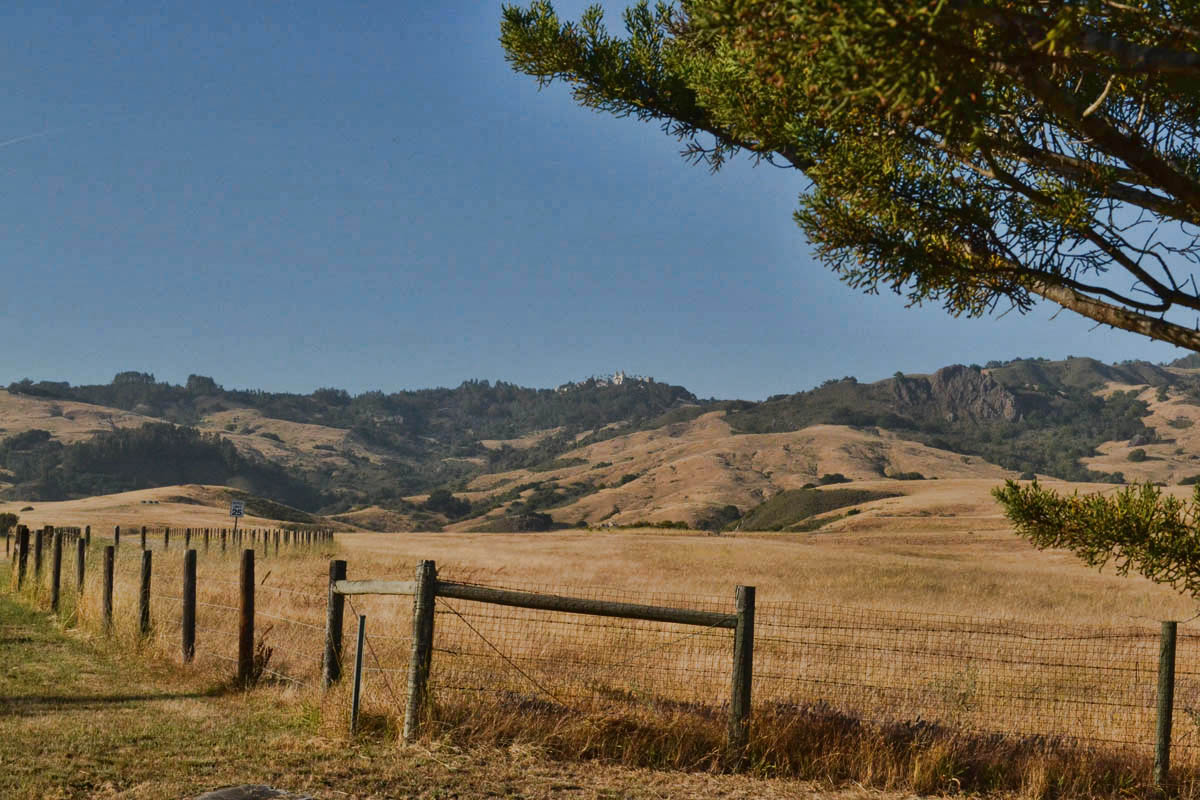 That tiny blob at the top of the hill is Hearst Castle, where zebras still roam from the days it had its own zoo. 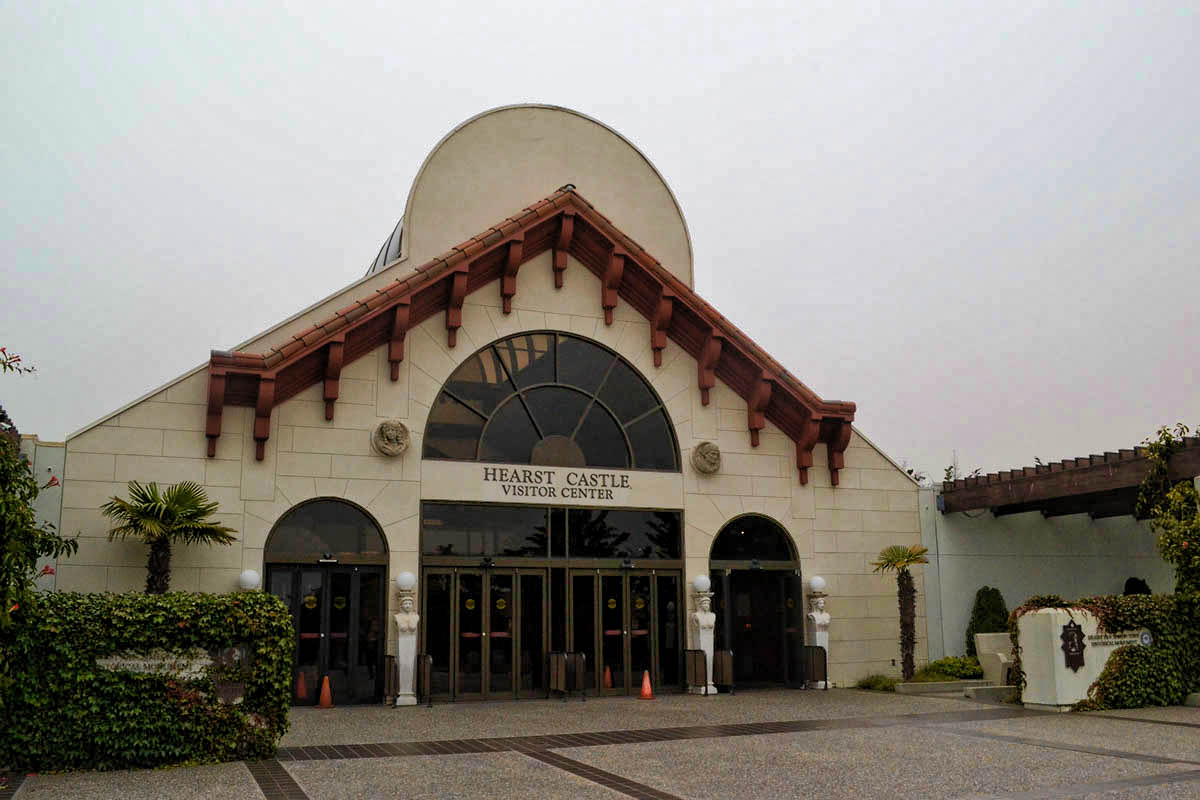 The Visitor’s Center is at the bottom of the hill, often shrouded by marine layer. 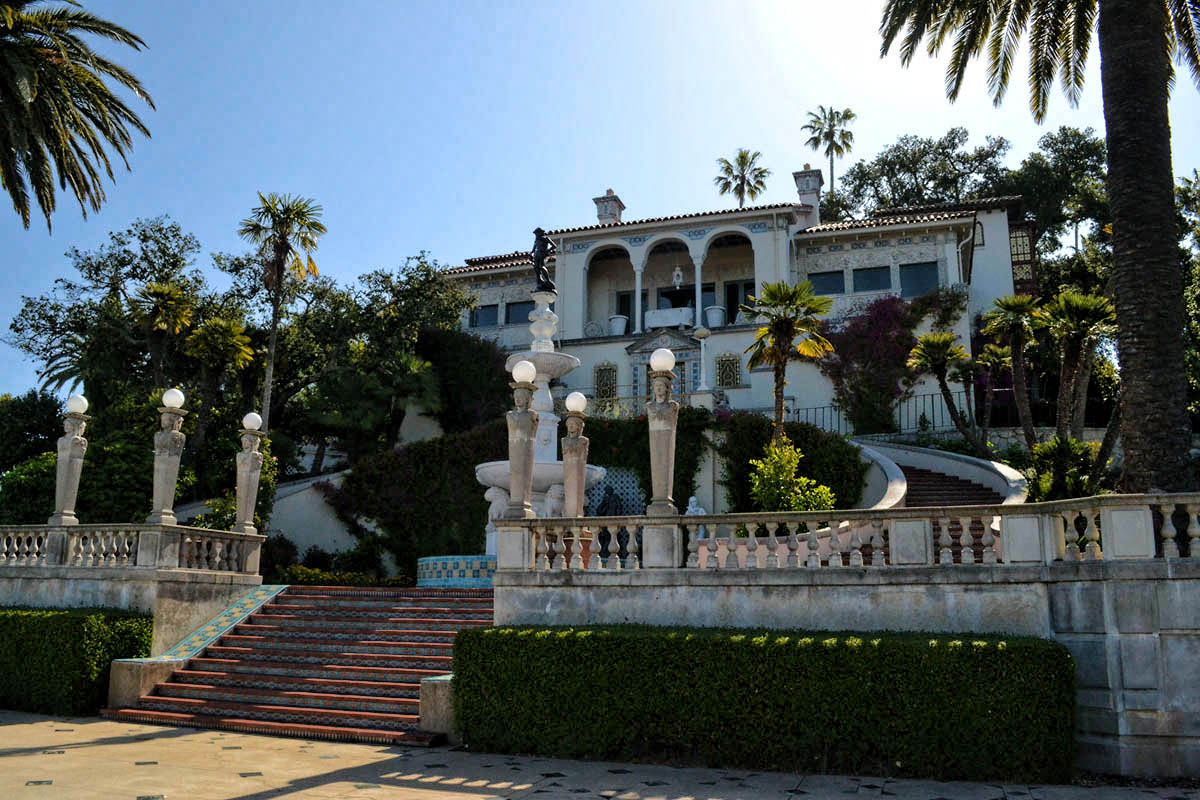 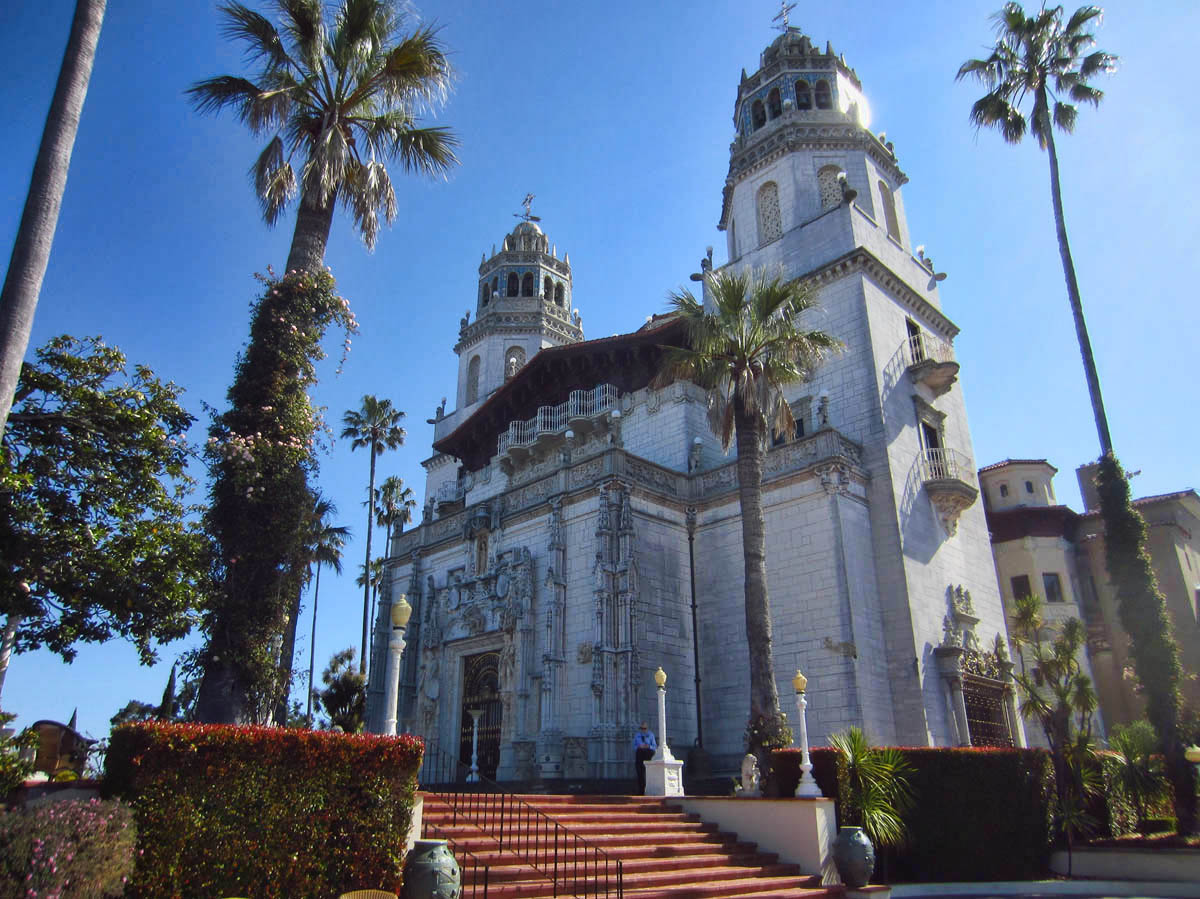 Casa Grande was designed after a church in Ronda, Spain.

My reason for visiting San Simeon was to tour the famous Hearst Castle.   I have always had a bit of curiosity about the Hearst Empire since college days when Patty Hearst was kidnapped.  We are about the same age, and I used to wear her same aviator-style glasses, which prompted some of my leftist college friends to “Call me Tania.”    (For those who might be too young to remember, Patty Hearst was kidnapped by the Symbionese Liberation Army.   As often happens in situations of captivity, she succumbed to “Stockholm Syndrome” whereby brainwashed captives begin to identify with their captors. She changed her name to “Tania” after the kn girlfriend of Che Guevara.  Long before the days of Facebook, her rifle-toting photo and audio tape “Call me Tania” went “viral.”) 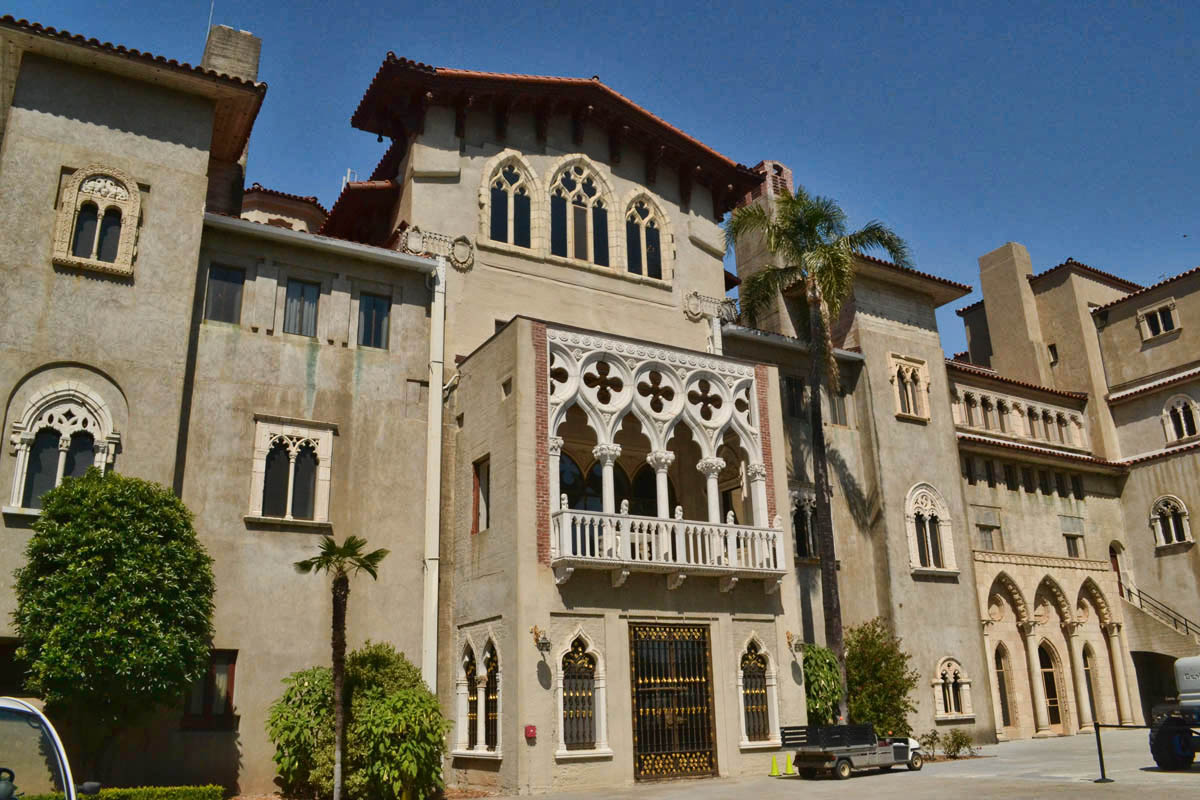 The back side of the Castle, or Casa Grande. 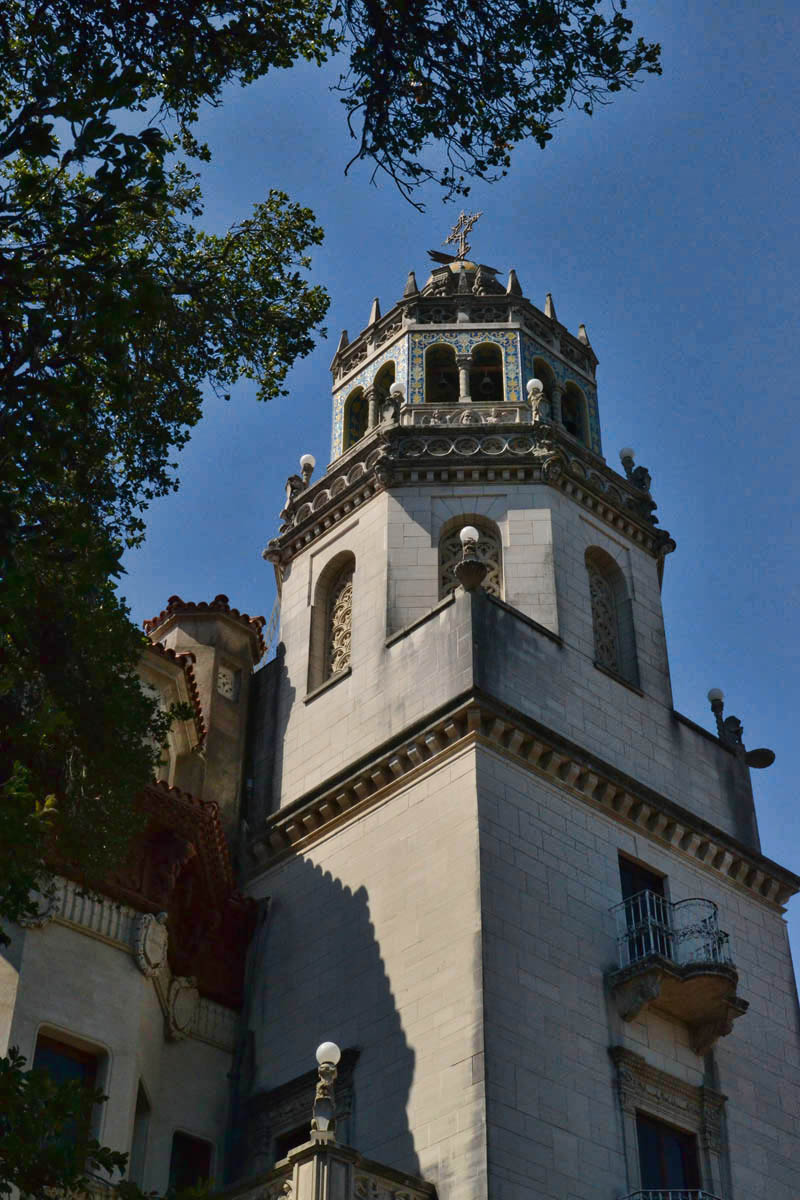 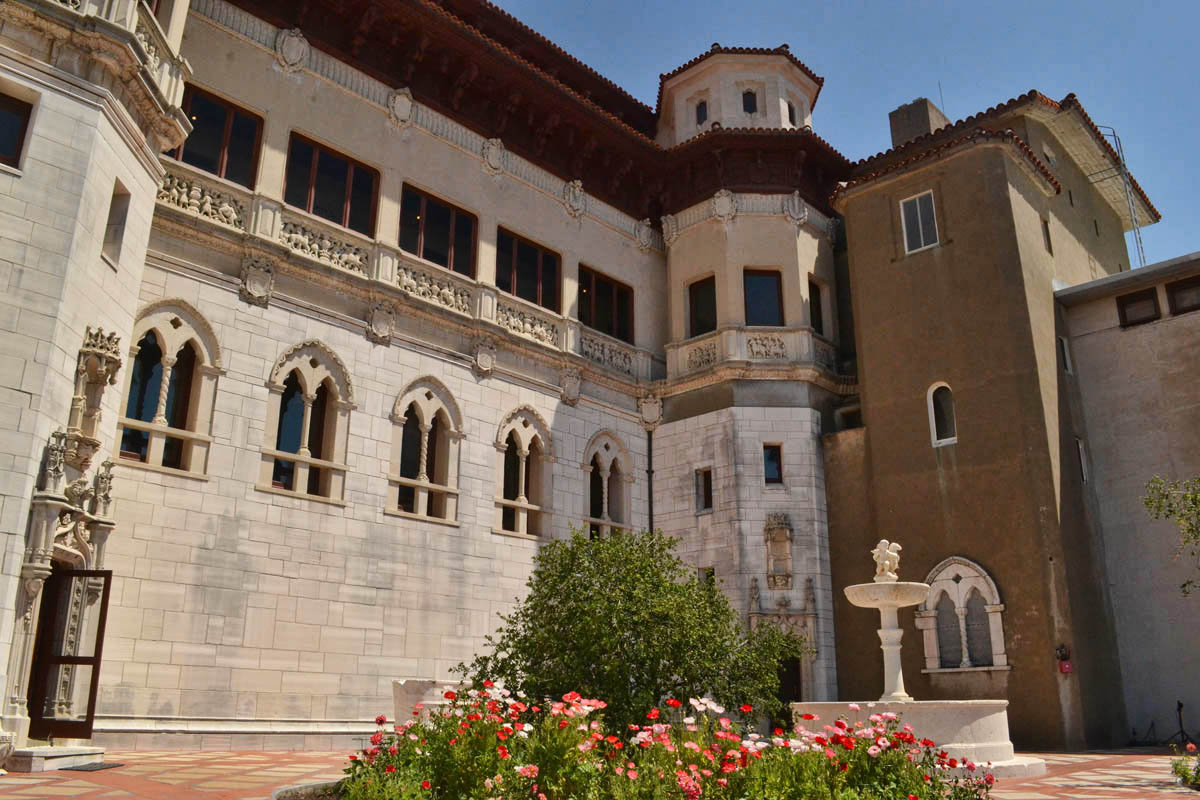 Also contributing to my interest in the Hearst family was my stint much later in life as National Account Manager with American Express.  Hearst Publications was one of my accounts. I always wanted to see the wellspring from which this behemoth corporation originated, from his very first magazine, Motor, to the Big “O” herself, Oprah’s O Magazine. 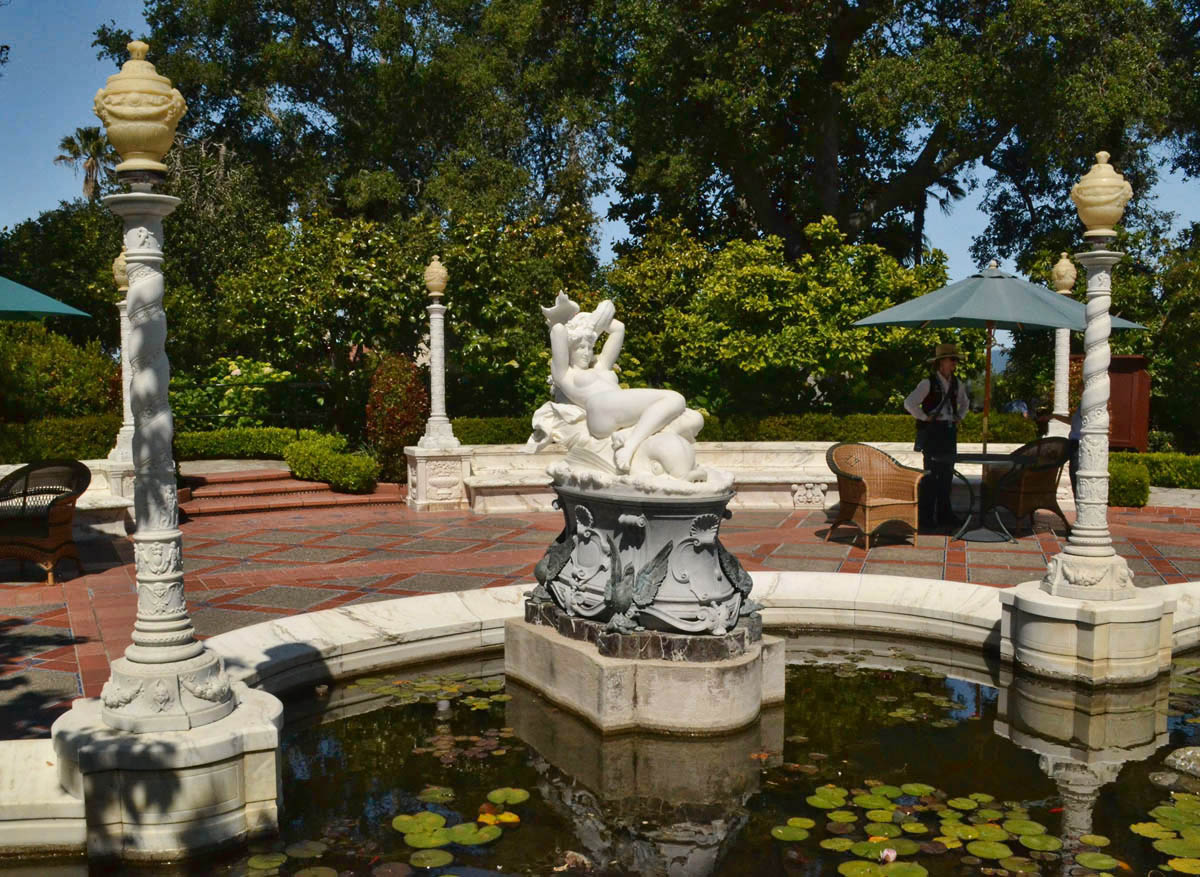 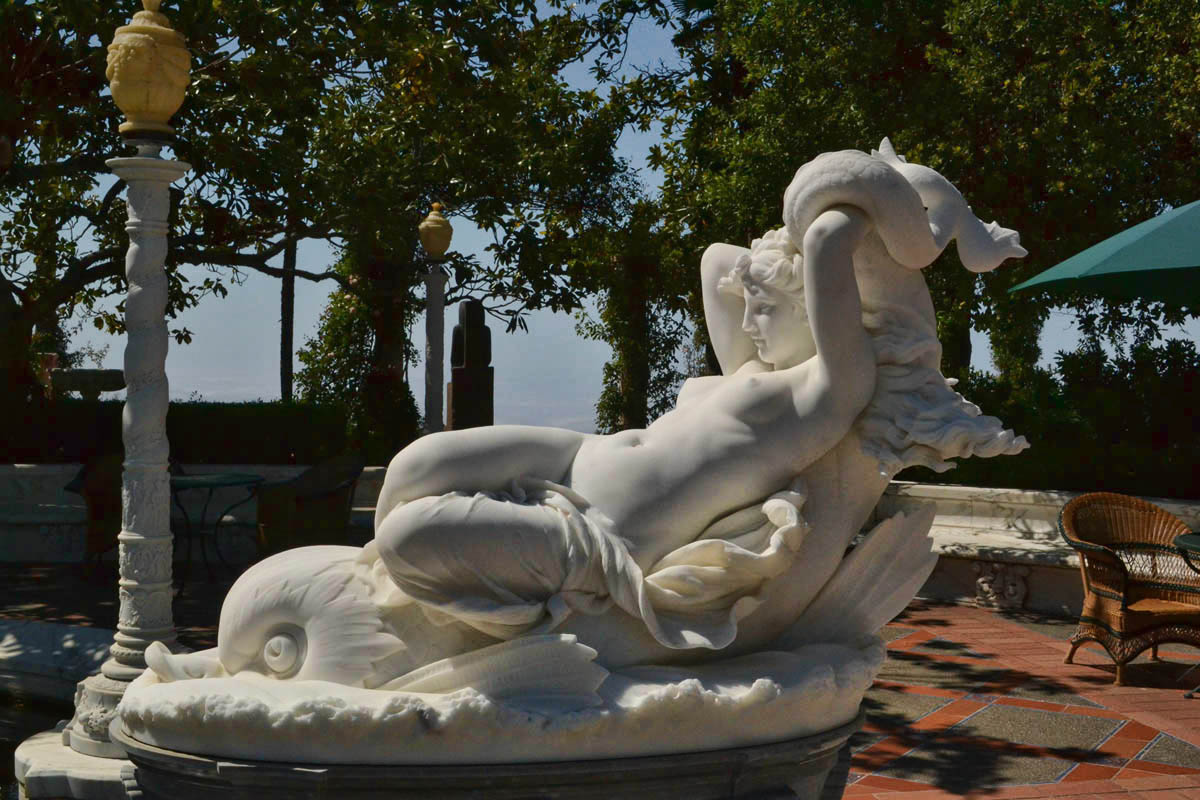 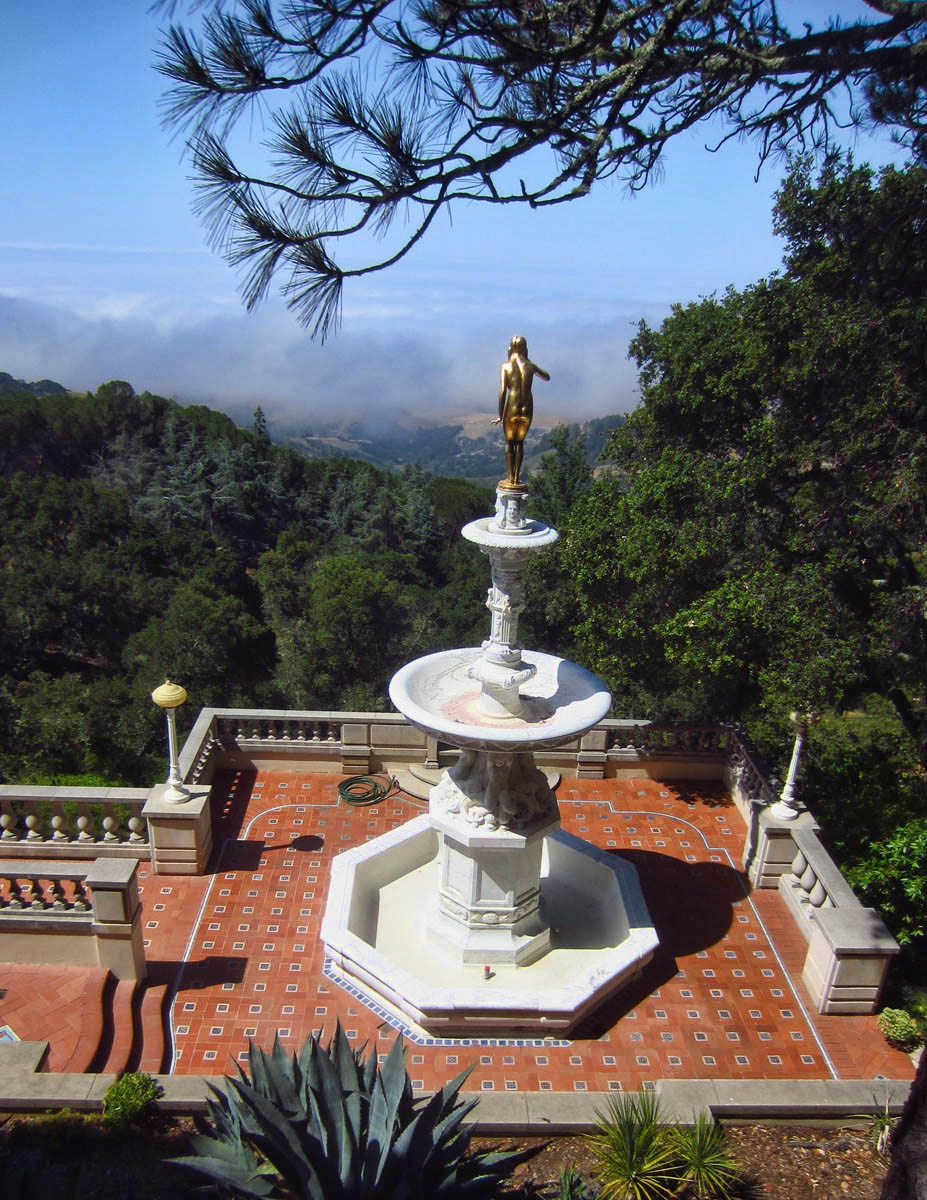 This view should overlook the ocean, except for the coastline is still shrouded in fog at this early hour. 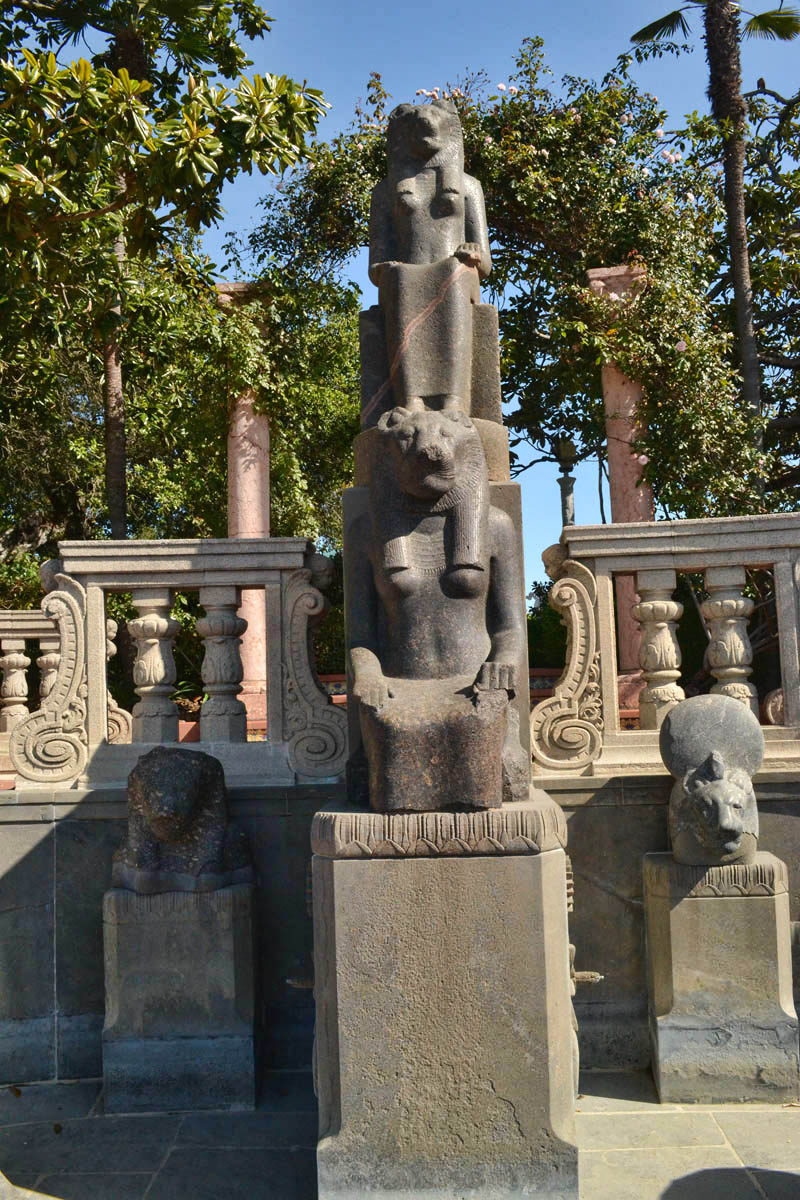 The oldest sculptures on the grounds, Four Egyptian sculptures of the lion-faced goddess Sekhmet, 3,500 years old.

I don’t pack too many “creature comforts” for my road trip, due to being a spontaneous escape.  When one runs away from home, one grabs what they can, and little things like “pillows” are often overlooked.   So waking up for my early morning tour of the castle leaves me feeling a little stiff and sore.   So consider the irony when the first thing I see upon arriving at the elaborate Hearst Castle Visitors Center is a huge billboard with the following quote from William Randolph Hearst himself  “I would like to build something up on the hill at San Simeon.  I get tired of going up there and camping in tents.  I’m getting a little old for that.  I’d like something a little more comfortable.”  (I feel your pain, Mr. H!) 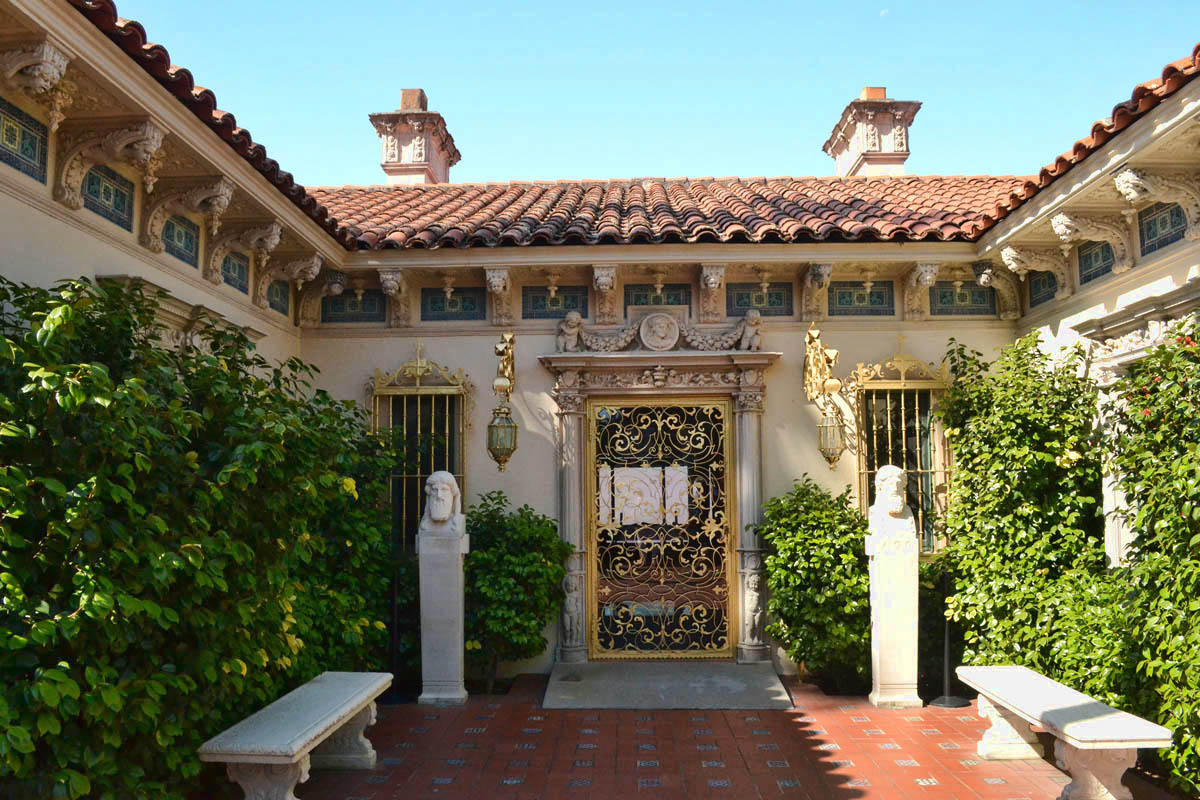 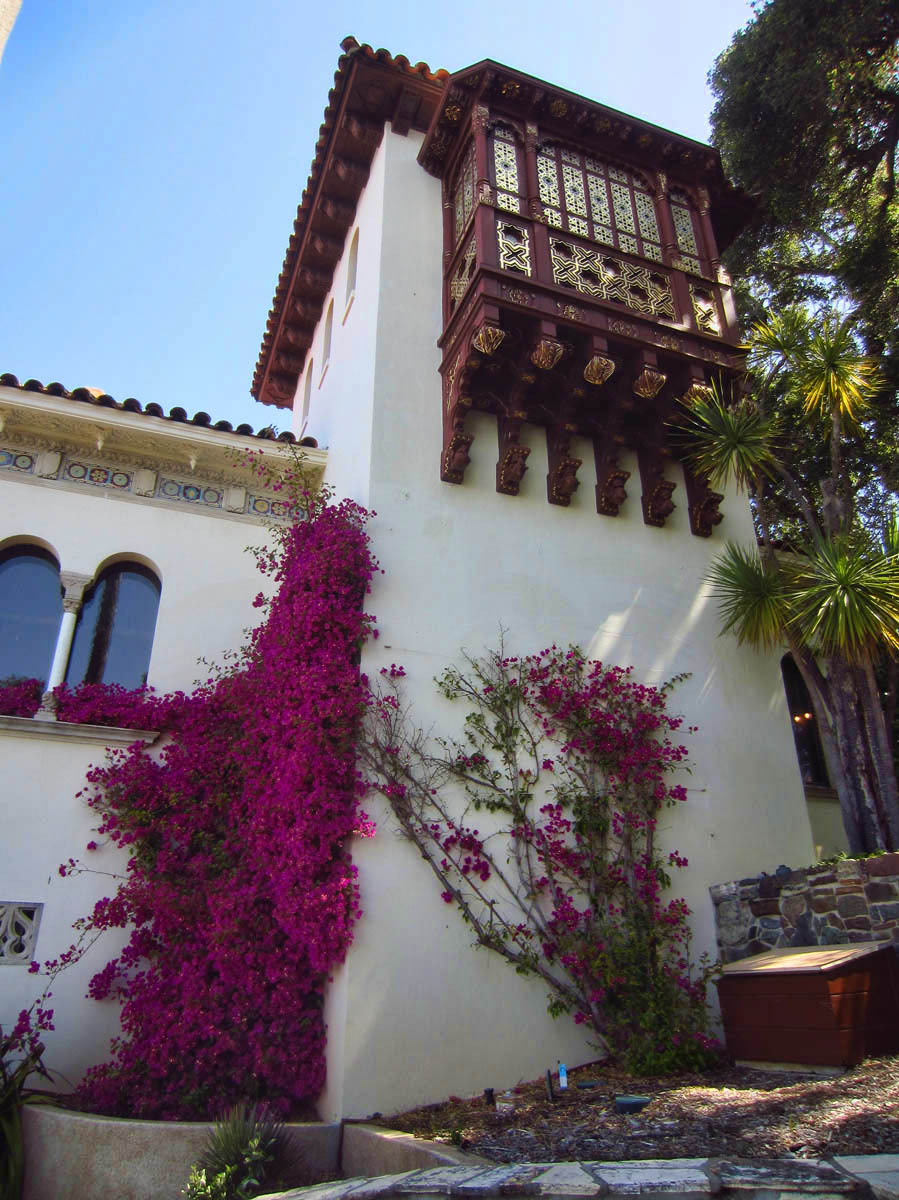 Enclosed balcony on the smaller mansion. 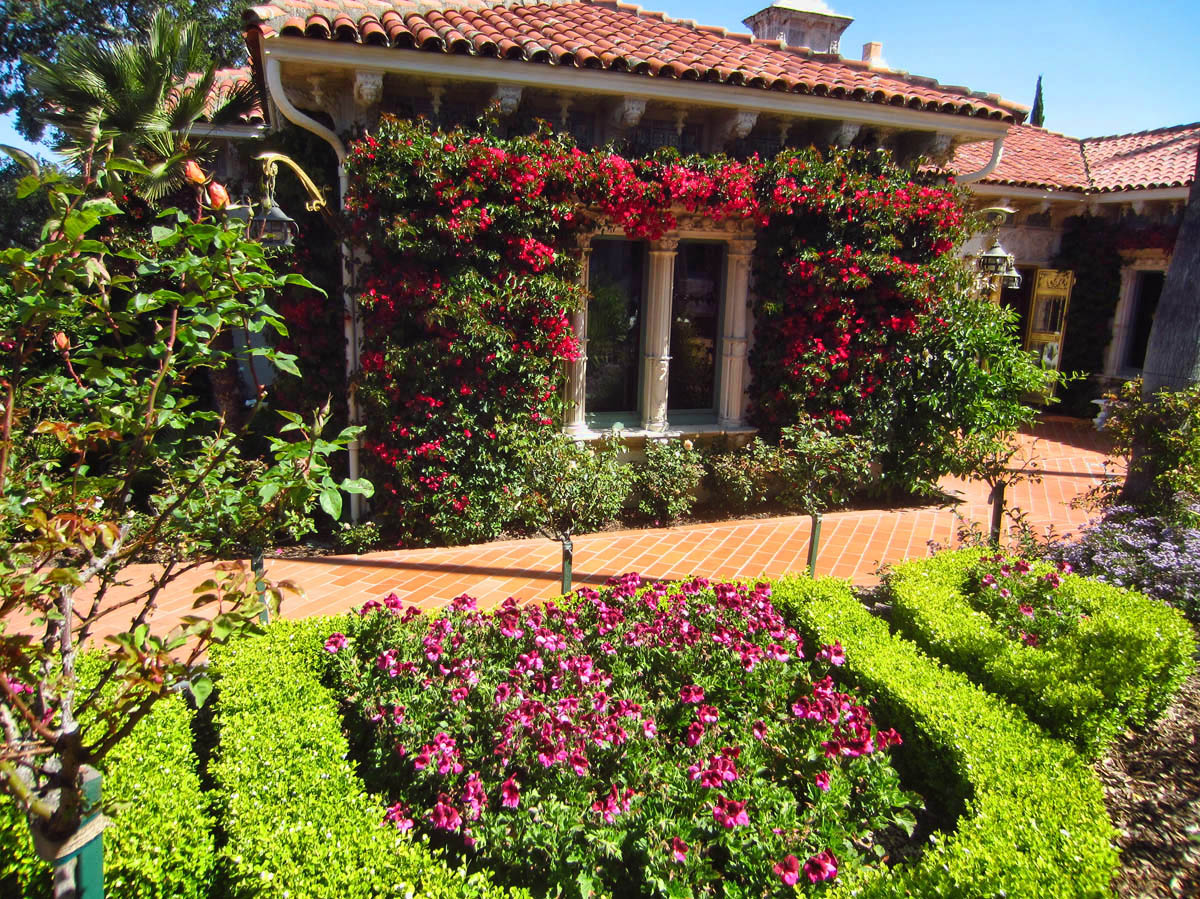 Another of the three guest cottages.

The 250,000 acre ranch was originally purchased in 1847 by George Hearst, and referred to as La Cuesta Encantada, Spanish for “Enchanted Hill.”  William referred to it as “Camp Hill,” as he used to climb the 1,600 ft to camp at the top of the rolling hills amidst the Santa Lucia mountains.   Volunteers today affectionately call it just “Hilltop.” 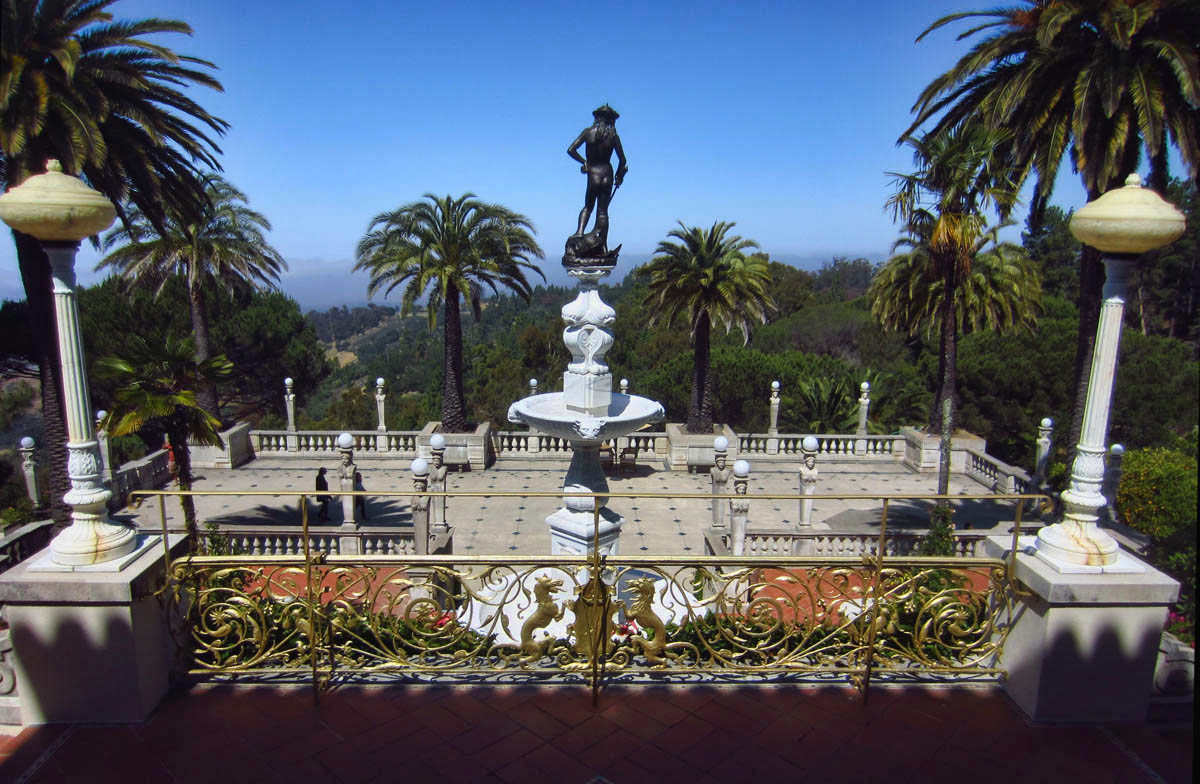 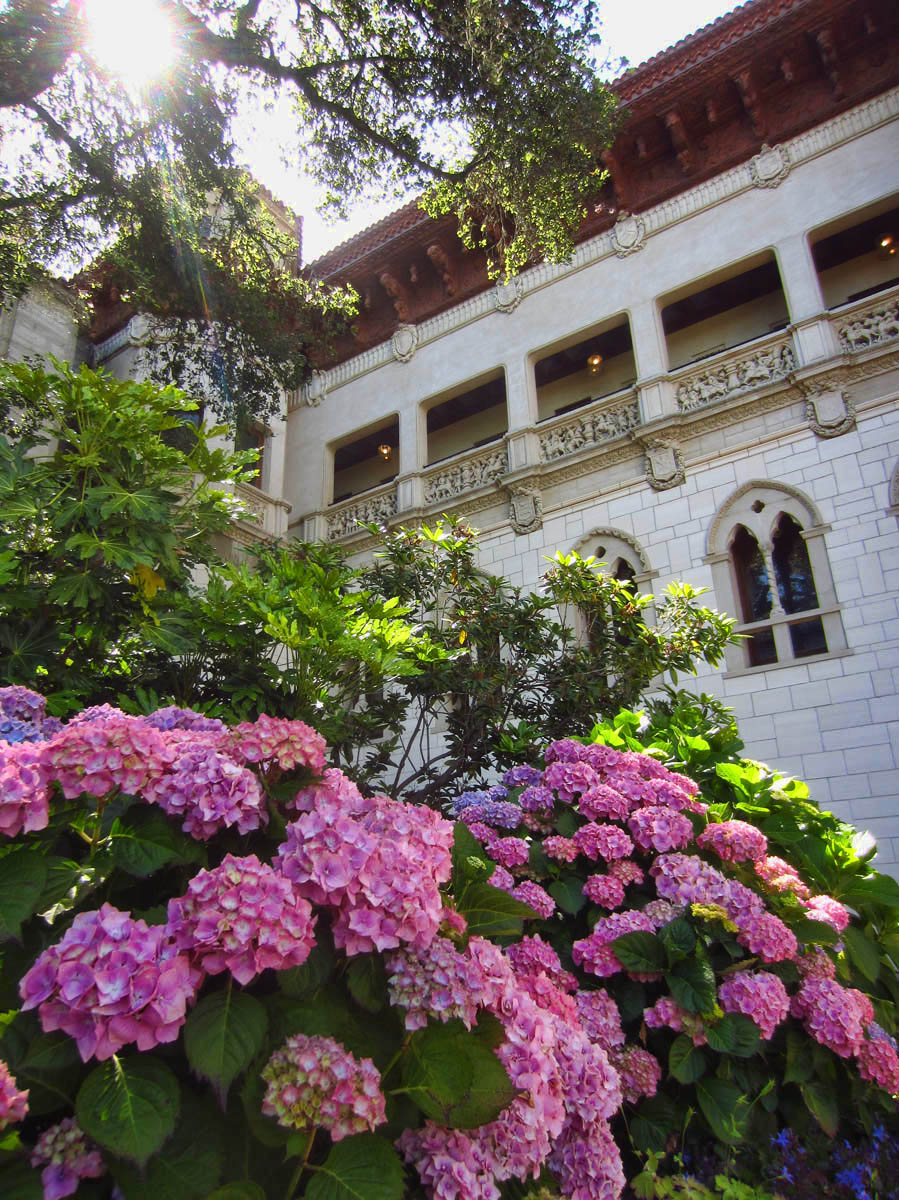 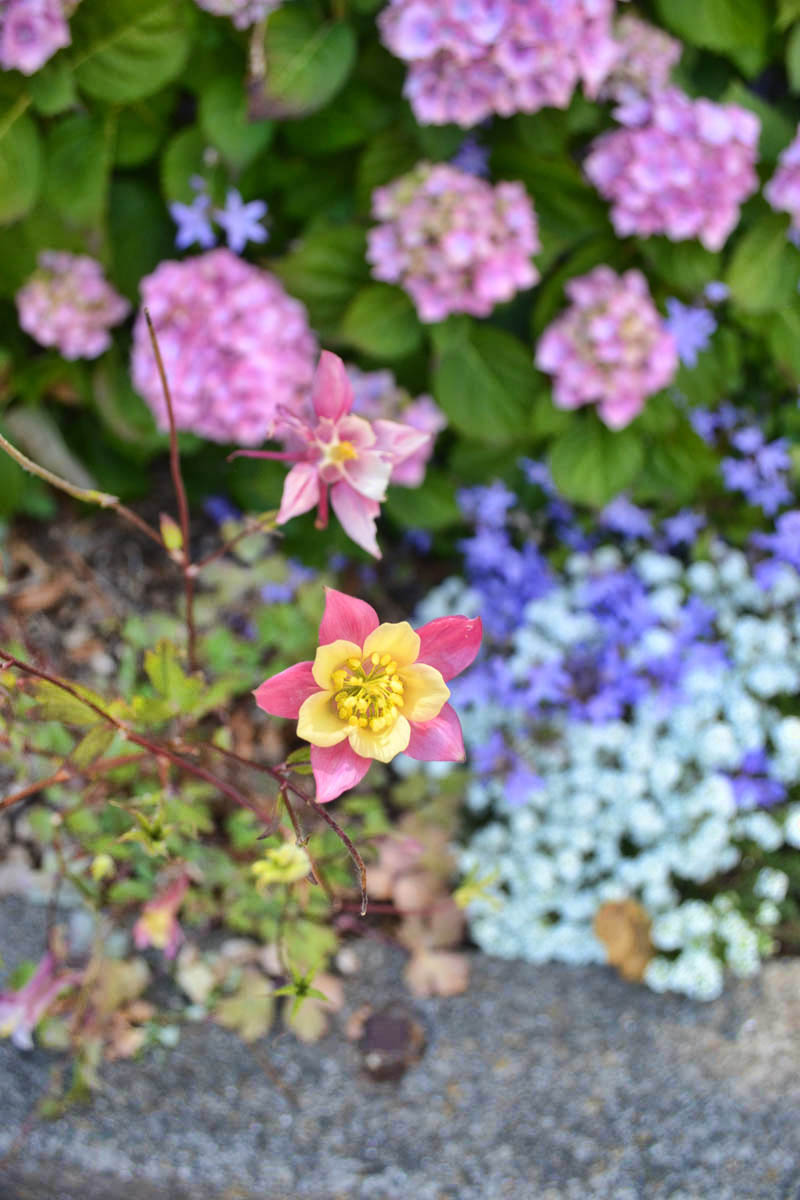 “Swan Pink and Yellow Columbine.” The perfectly manicured gardens are almost as beautiful as the Castle itself.

I have learned with tours such as these, it helps to book the first tour of the day to avoid as many “photo bombs” as possible.   Still, even the first tour at 8:50am is booked to capacity.   As we ride the bus up the long, winding five mile road inland, the man behind me remarks that they are making a killing off the crowds at $25 per head, to which his wife responds, “Well, George, America doesn’t have many castles!” 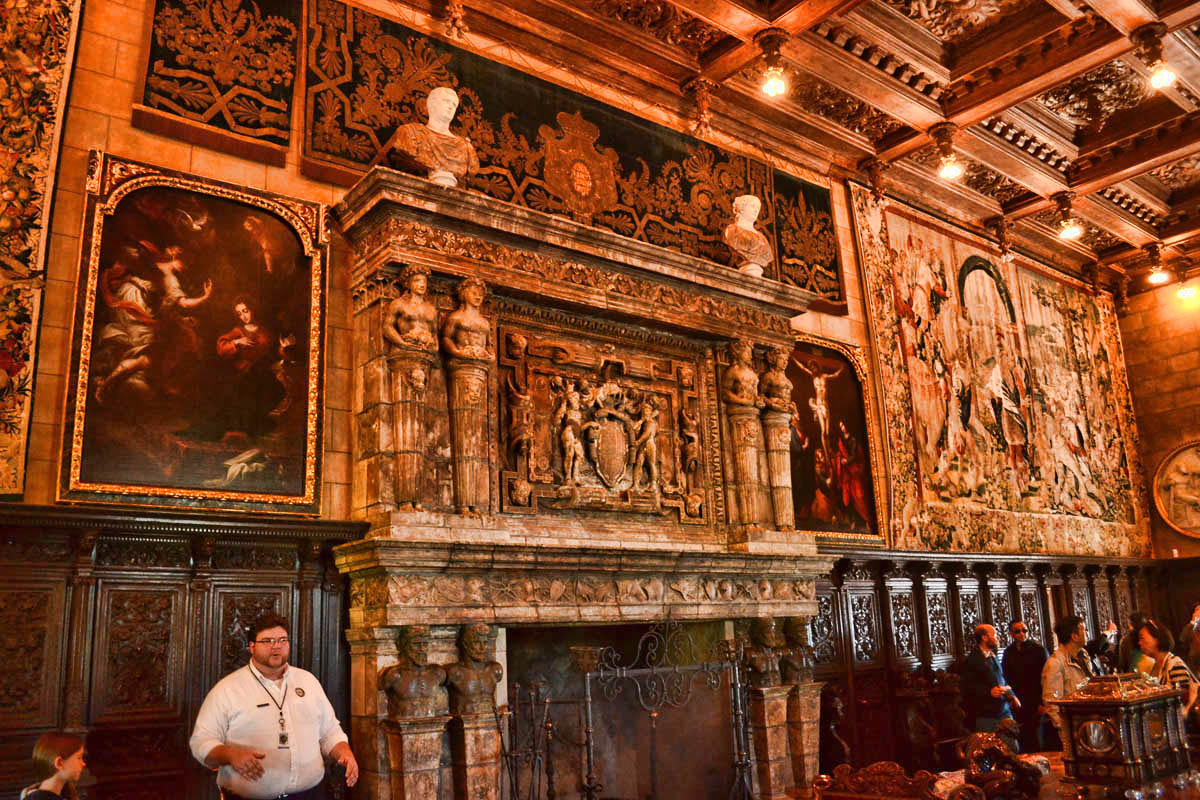 Our tour guide tells of the elaborate, 5,000+ piece art collection. 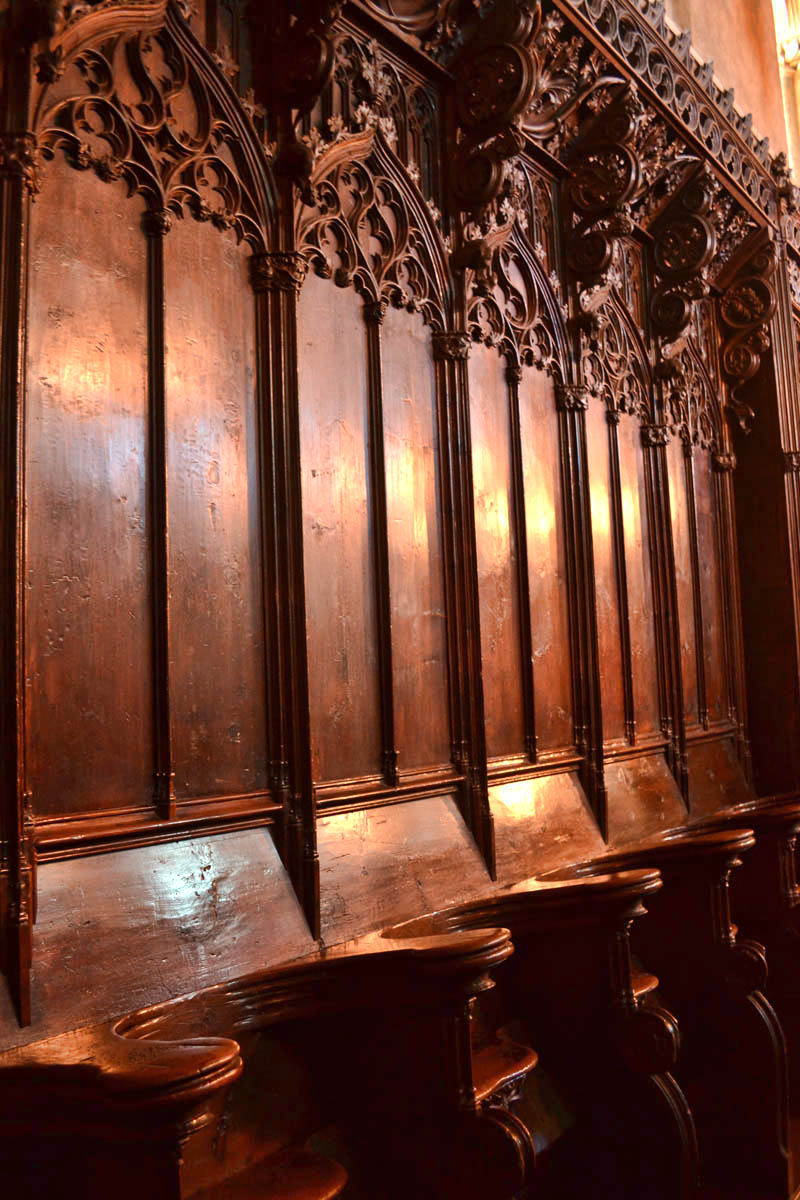 While the Hearst Compound is referred to as a “castle,” it’s actually a group of one large and three smaller mansions.  Hearst, along with his mistress the famed actress Marion Davies, occupied the main house, a 68,500 sq ft “Casa Grande” with 38 bedrooms, while famous guests had their own “guest cottage” to choose from, one of three smaller mansions with four to eight bedrooms. 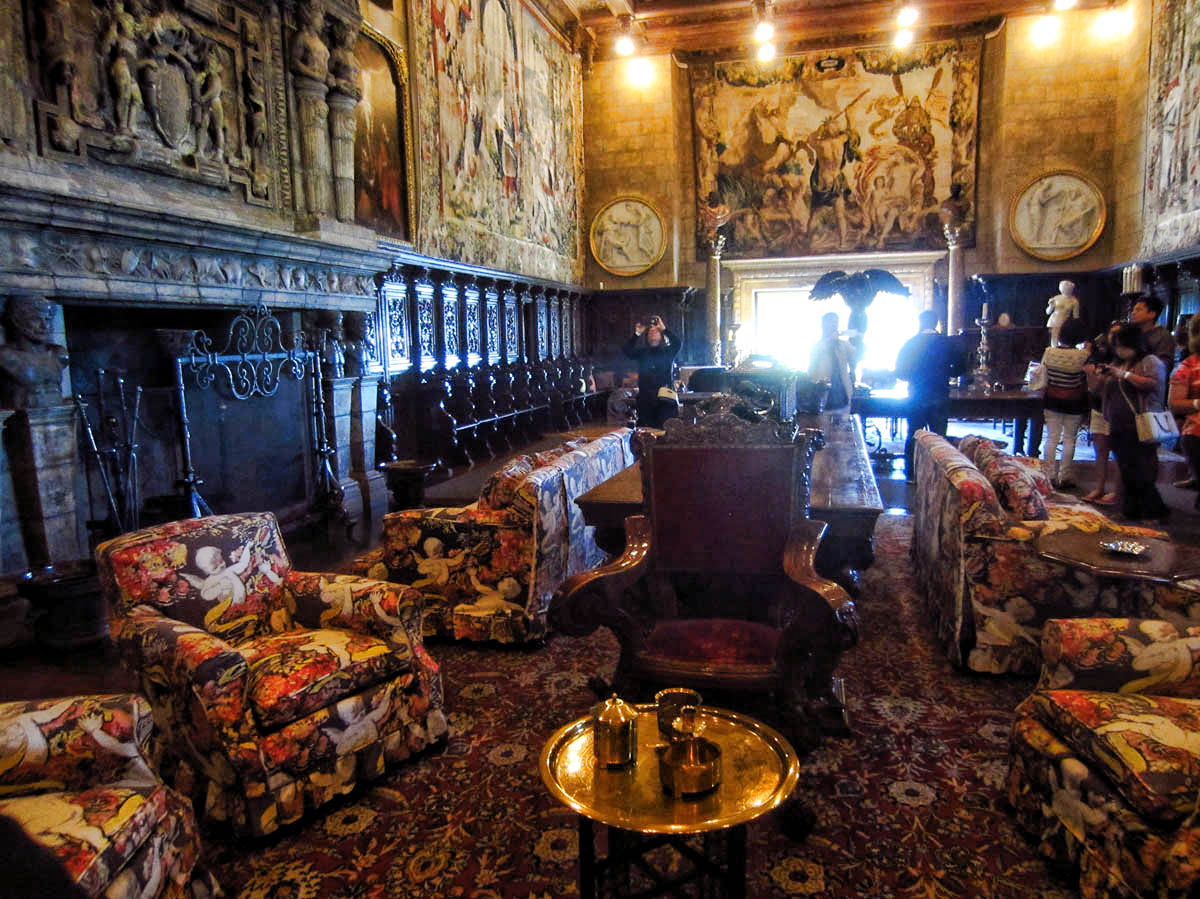 Receiving room where guests waited to be greeted by Mr. Hearst 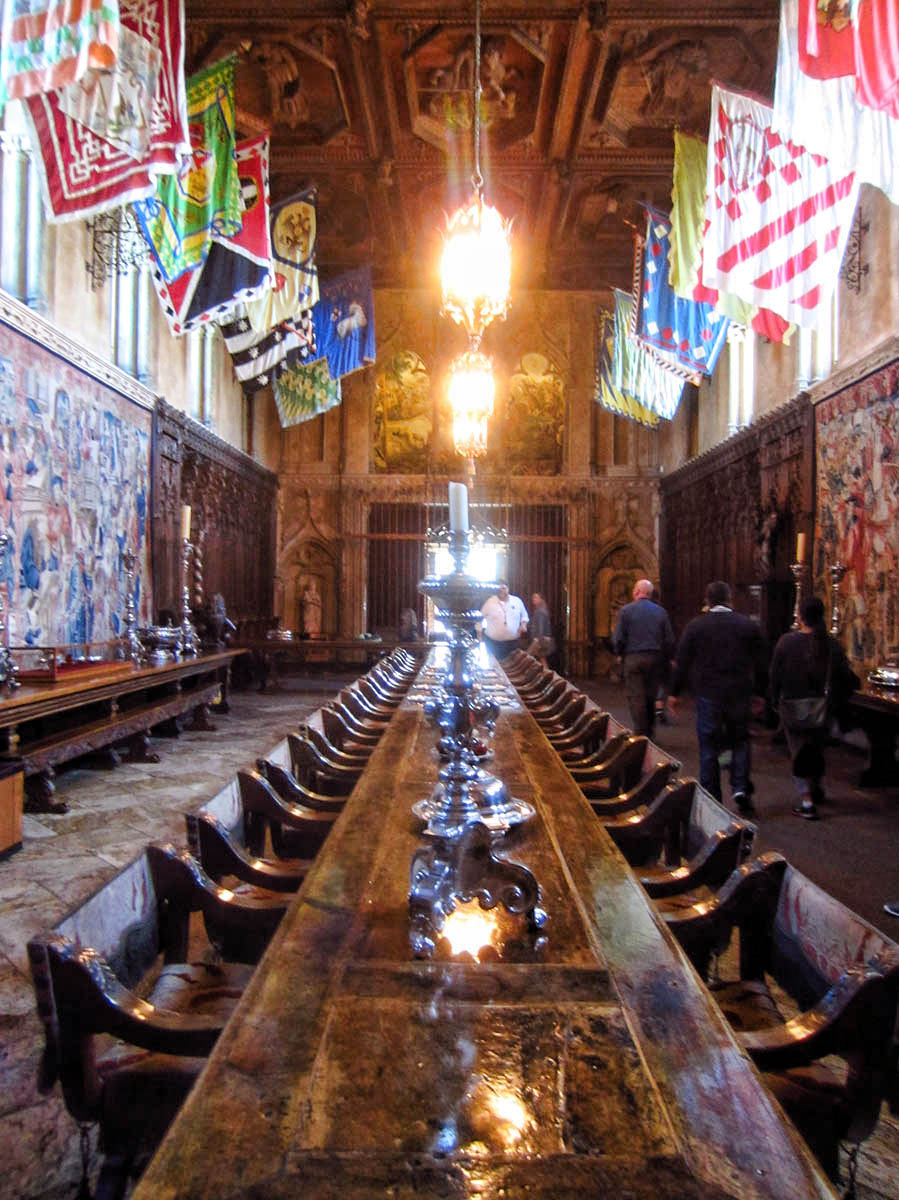 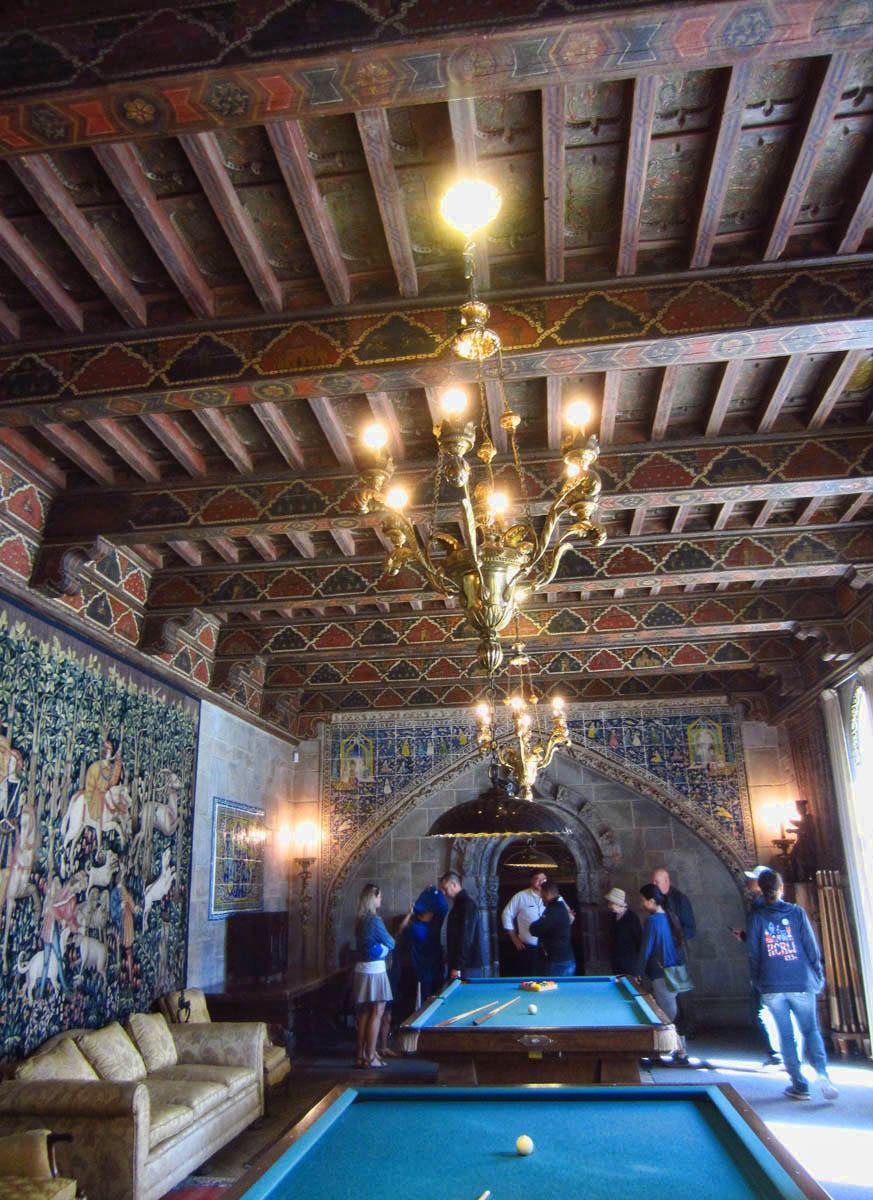 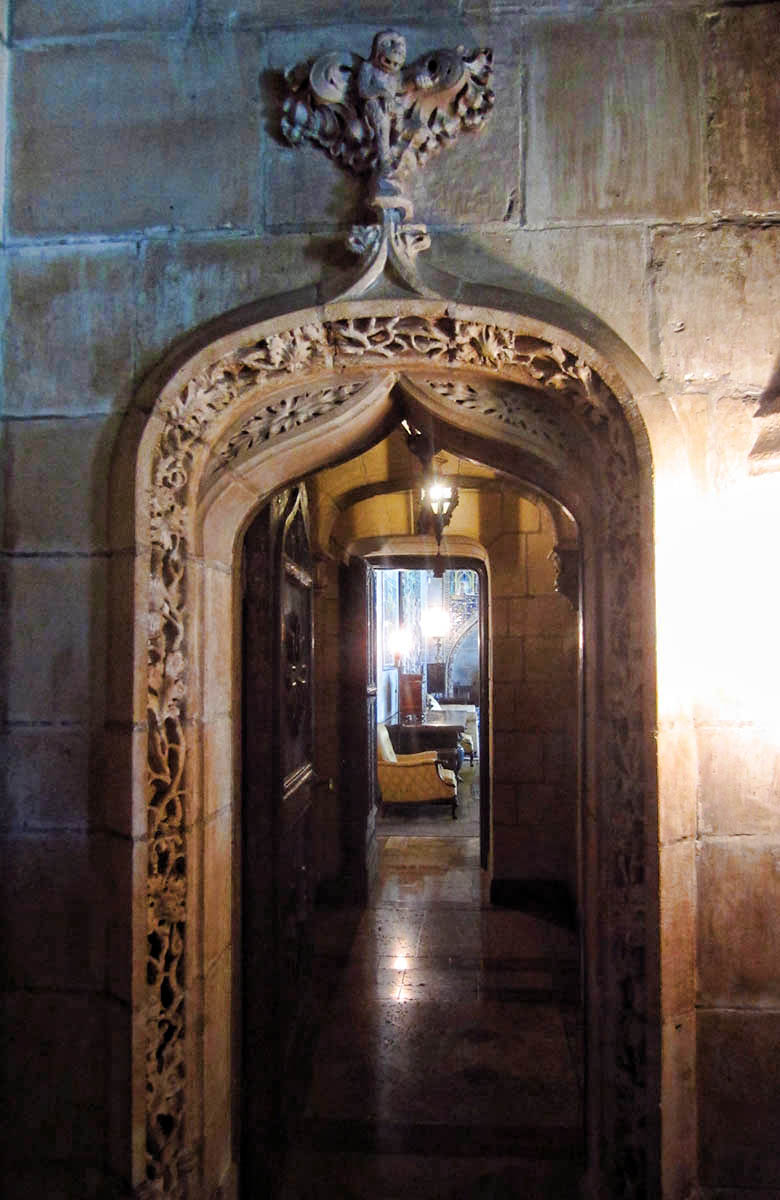 “Castle-like” doorways make me think of that castle to the east, Biltmore House.

I am most eager to see the iconic Neptune Pool.  Had I actually done any research before arriving, I would have been prepared for the shock and disappointment of seeing the typically aquamarine-filled, refreshing pool of water surrounded by gleaming marble statuary now empty, filled with ladders, scaffolding, and shards of marble.  The 345,000 gallon pool the size of a football field has been leaking about 5,000 gallons a day, so in light of the recent California water crisis, the pool is closed for repairs and restoration.  Still a marvel in classic Roman elegance, it leaves my thirst unquenched. 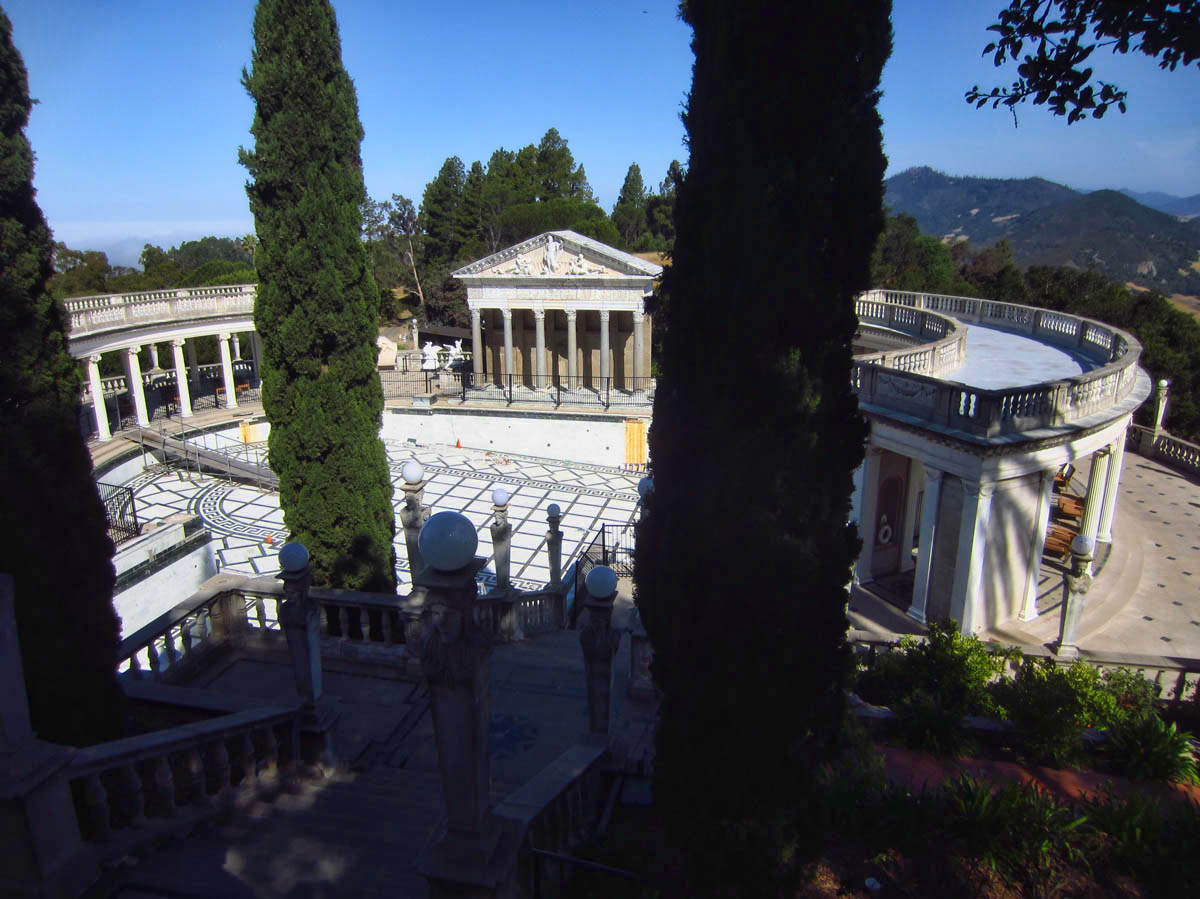 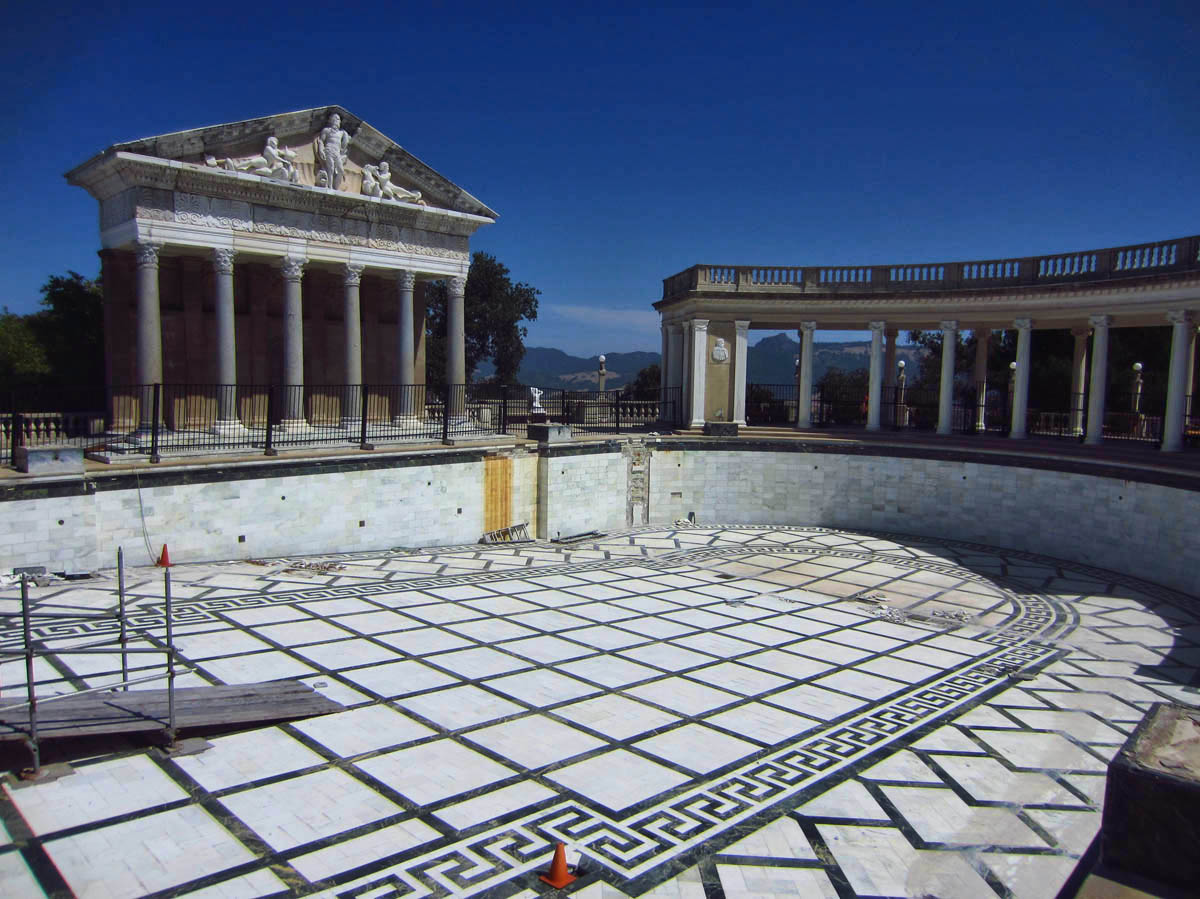 Restoration project is expected to take another year. 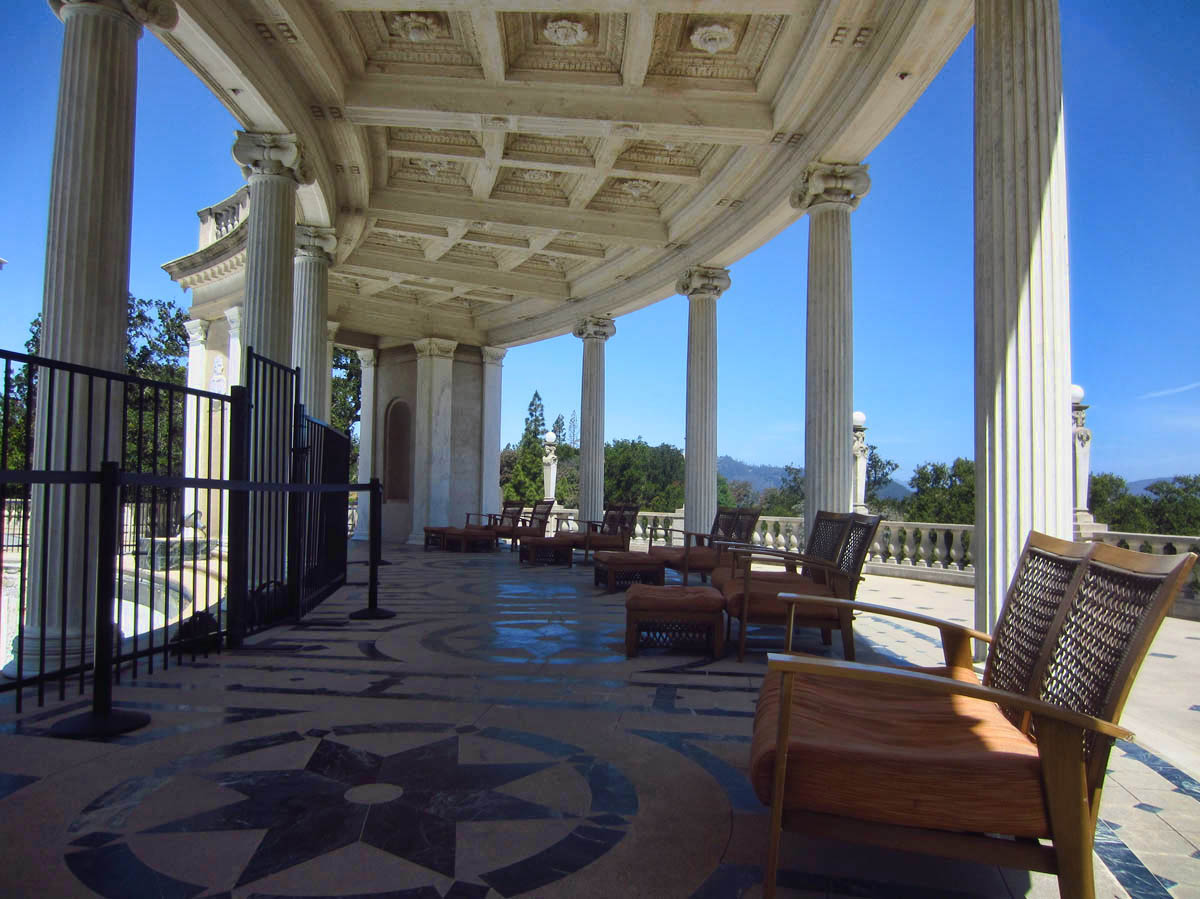 Guests are allowed to sit on the “modern” furniture. I could sit here all day! 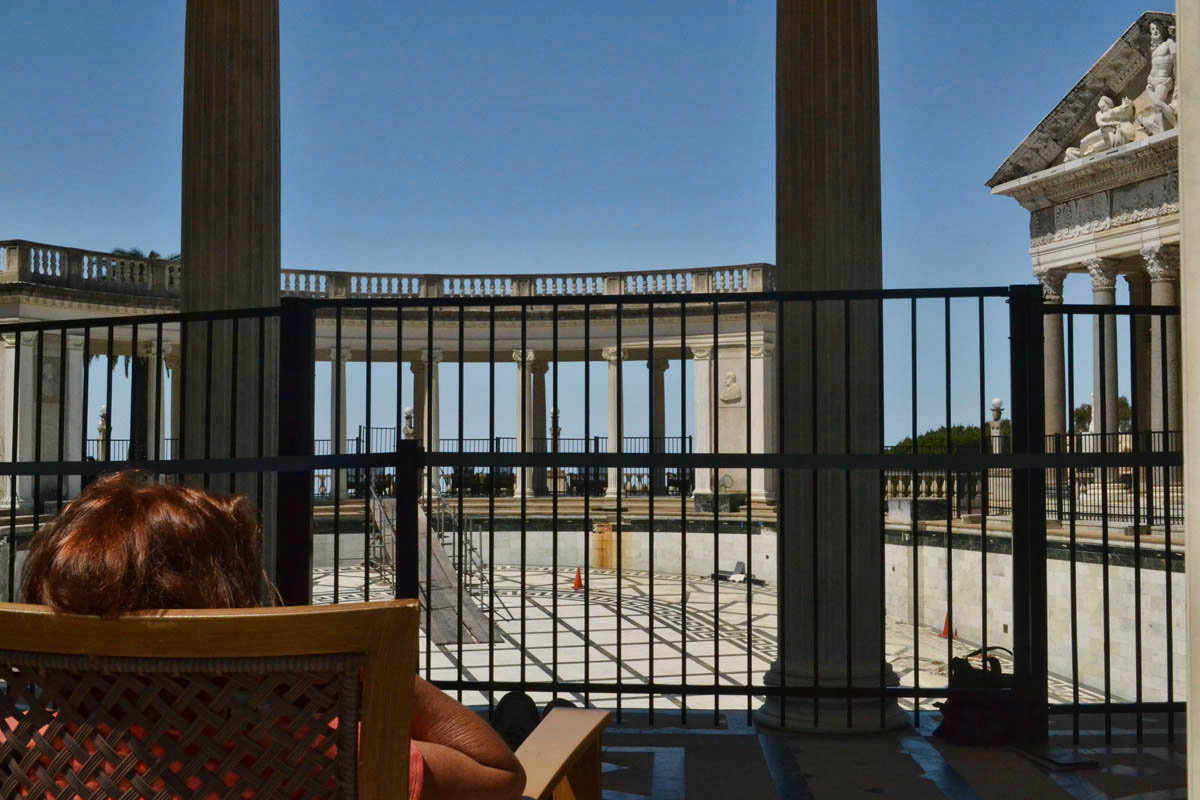 Imagining what it must have been like languishing beside the pool. Hopefully they weren’t kept out by a wrought iron fence!

The “castle” was designed by architect Julia Morgan, one of the first women to receive a civil engineering degree from UC Berkeley.  Quite a fete for a woman in the architectural field nowadays , much less back then.  She and Hearst worked on the still unfinished project from 1919 until 1947. 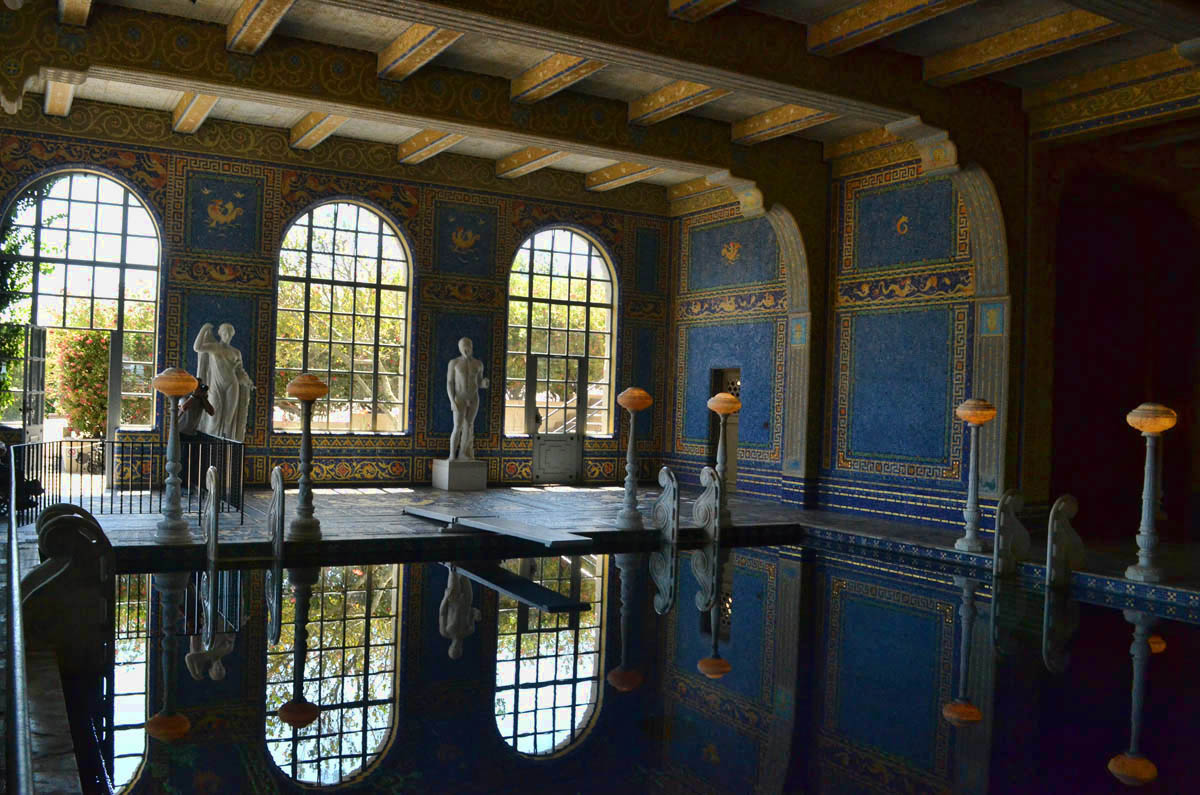 The smaller indoor pool referred to as the “Roman Pool” was modeled after the baths of ancient Rome. 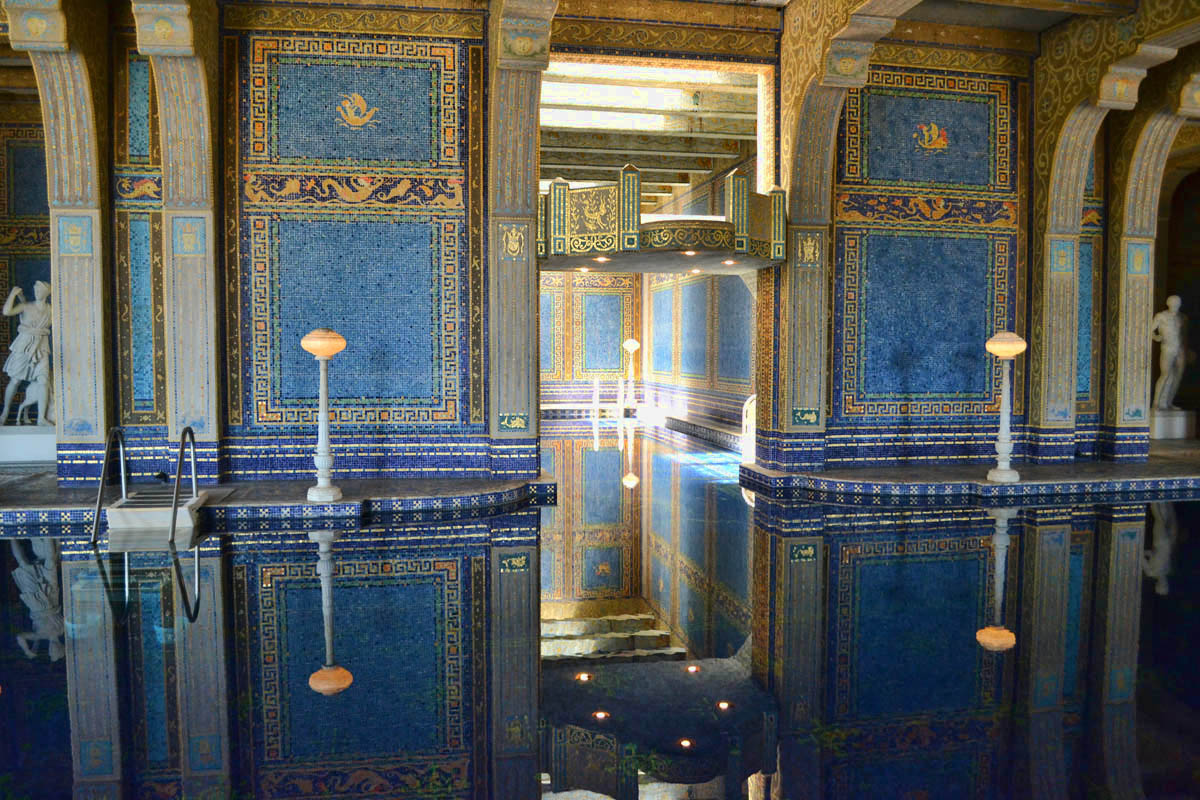 The 10 ft deep, 205,000 gallon pool is decorated from floor to ceiling with glass mosaic tiles. 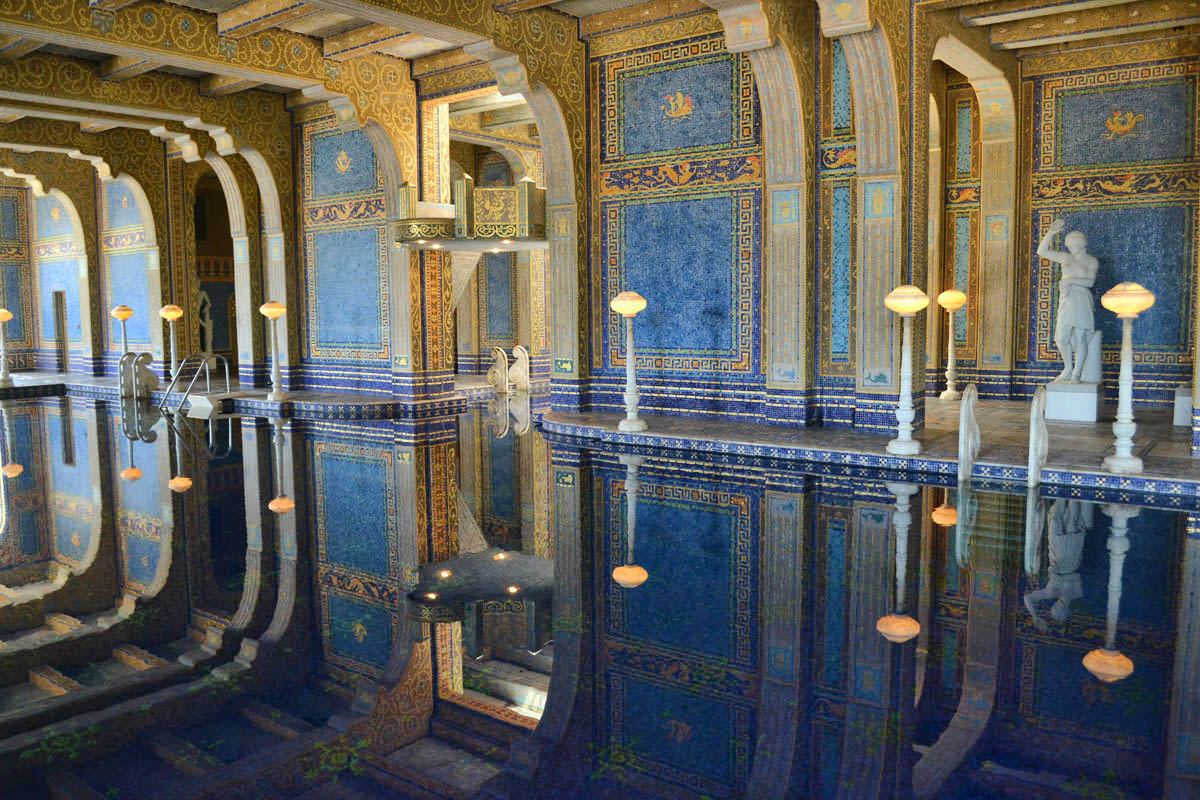 The bottom of the pool is decorated in star motif, while the alabaster lamps represent moons. The ceiling is decorated with sand and shell motif, so the theme is “A World Upside Down.”

My curiosity now satisfied about the Hearst Fortune, I am still wondering where Patty fits into all of this.  Finally, while visiting the second, smaller indoor Roman pool, our tour guide lets us in on a “little secret.”   The Hearst Heirs were swimming in the pool last night after the last tour departed Hilltop.  I can’t help but ask, “What about Patty?”  The canned response comes back, “We don’t talk about Patty on the tour.   She is not part of the timeline.”    In the end, Jimmy Carter commuted her sentence.  Bill Clinton pardoned her.  But she doesn’t make the tour.  I hope they at least let her swim in the pool.    😉