In revisiting the small coastal towns along this route, I keep asking myself, “What exactly did I find to do in this town for a whole week last time?” I have to continually remind myself “You were working 8 hours a day, five days of that week.” Although I may have spent a week in that town, by the time I accounted for the work week plus drive time on the weekends, I really only had a day to explore. Since I have more time for exploring on this trip, I looked forward to prodding and probing deeper in each stop along the way while revisiting some of my favorite destinations. Only I am finding I may have allotted more time than I need. 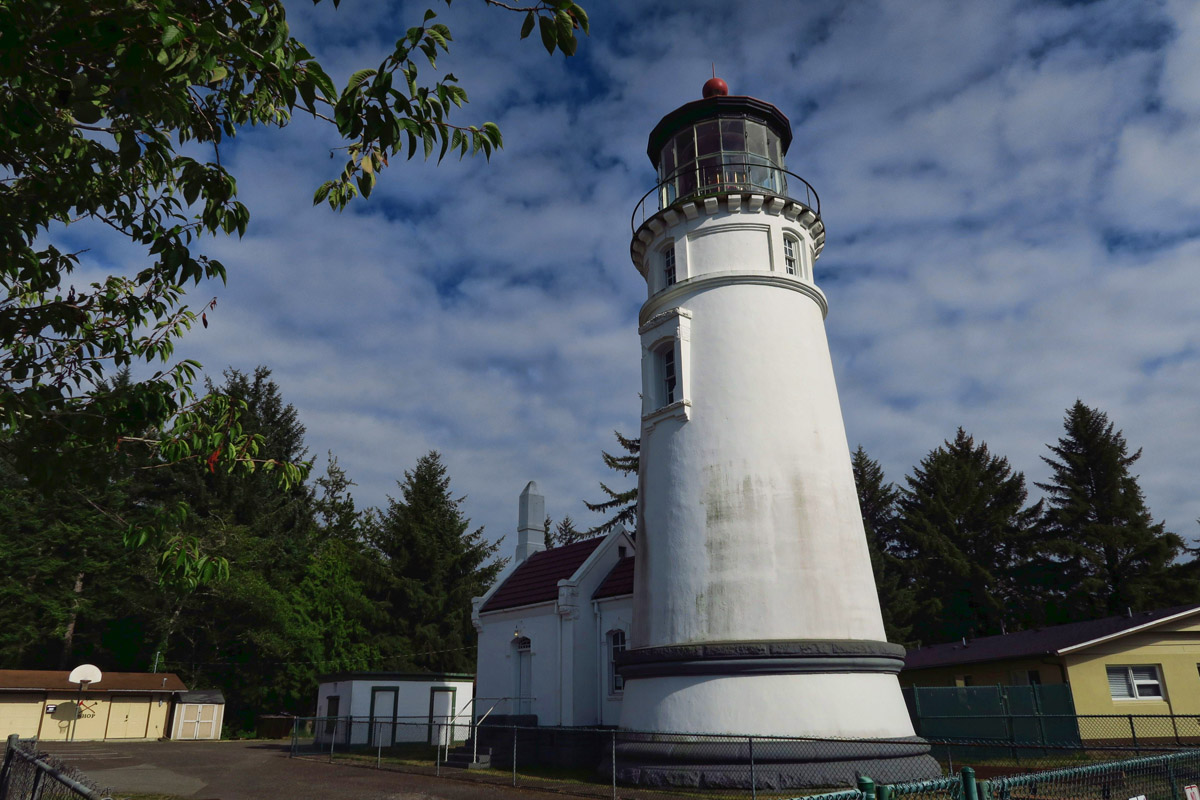 One of my top three reasons for returning to the Oregon Coast….the Umpqua Lighthouse. 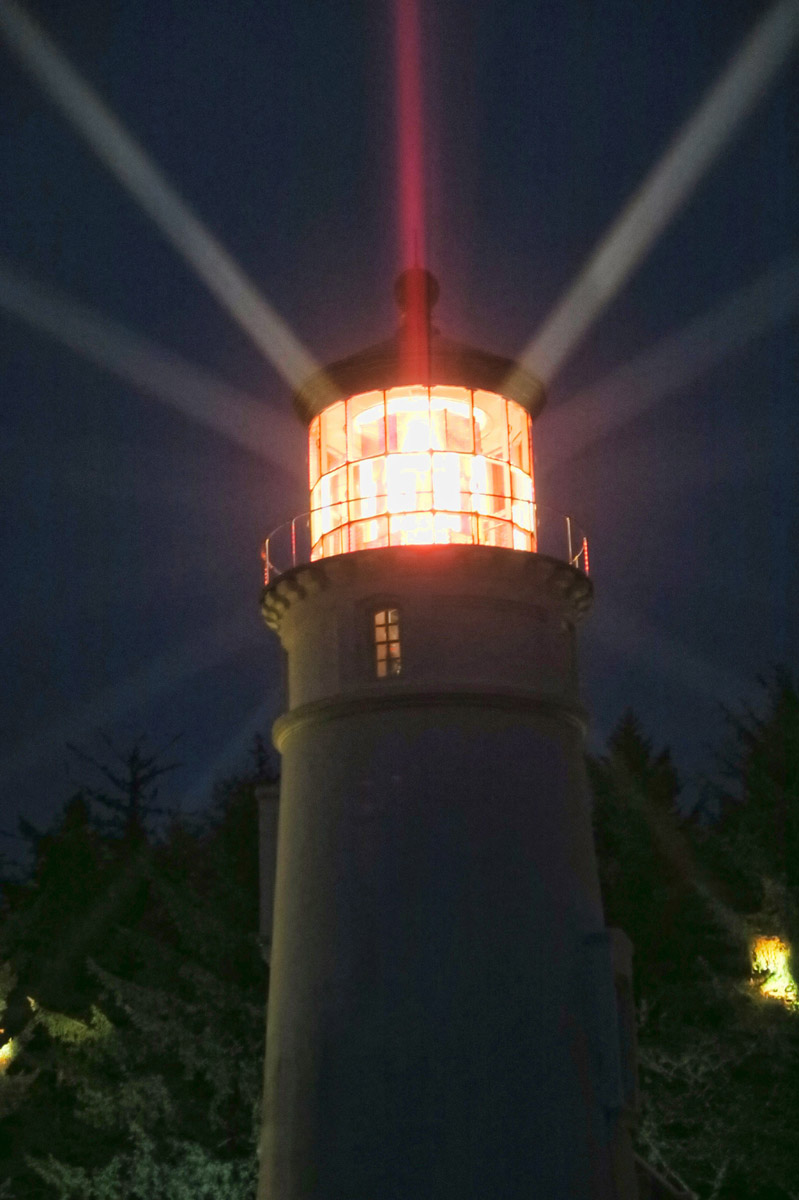 Dare I exaggerate, its lens is one of the most beautiful man made works of art I have seen. 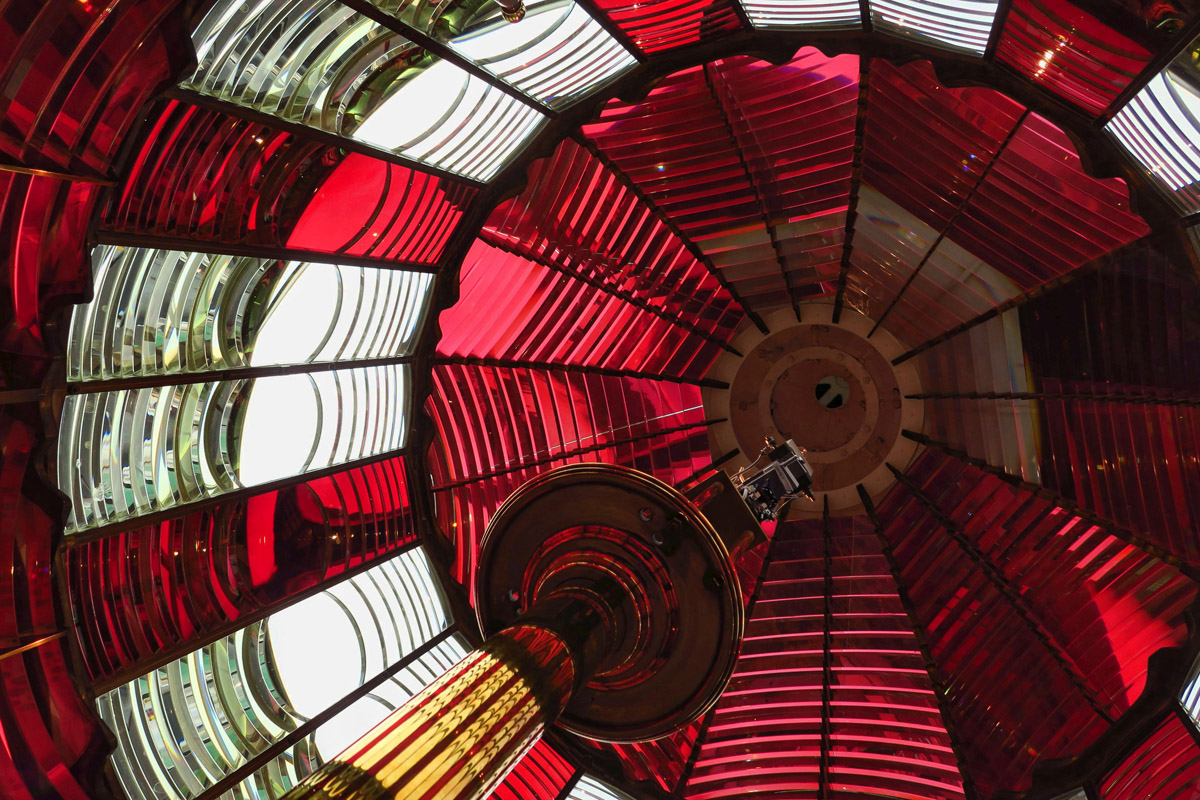 I compare going up into the lens room and sticking my upper body into the rotating, candy-striped Fresnel Lens (as far as allowed) to be akin to being inside a life-size kaleidoscope.

It’s a good thing I have a few waypoints planned along the way to slow me down. Without the structure of the job to hold me down, I might otherwise be in Alaska by now without a map. I scheduled some meet-ups with friends, and I need to have some minor repairs done to the Winnie. After my major hitch overhaul, my tow lights still don’t work properly. And the Tracker has a chronic short in the battery terminal wiring that needs to be addressed. 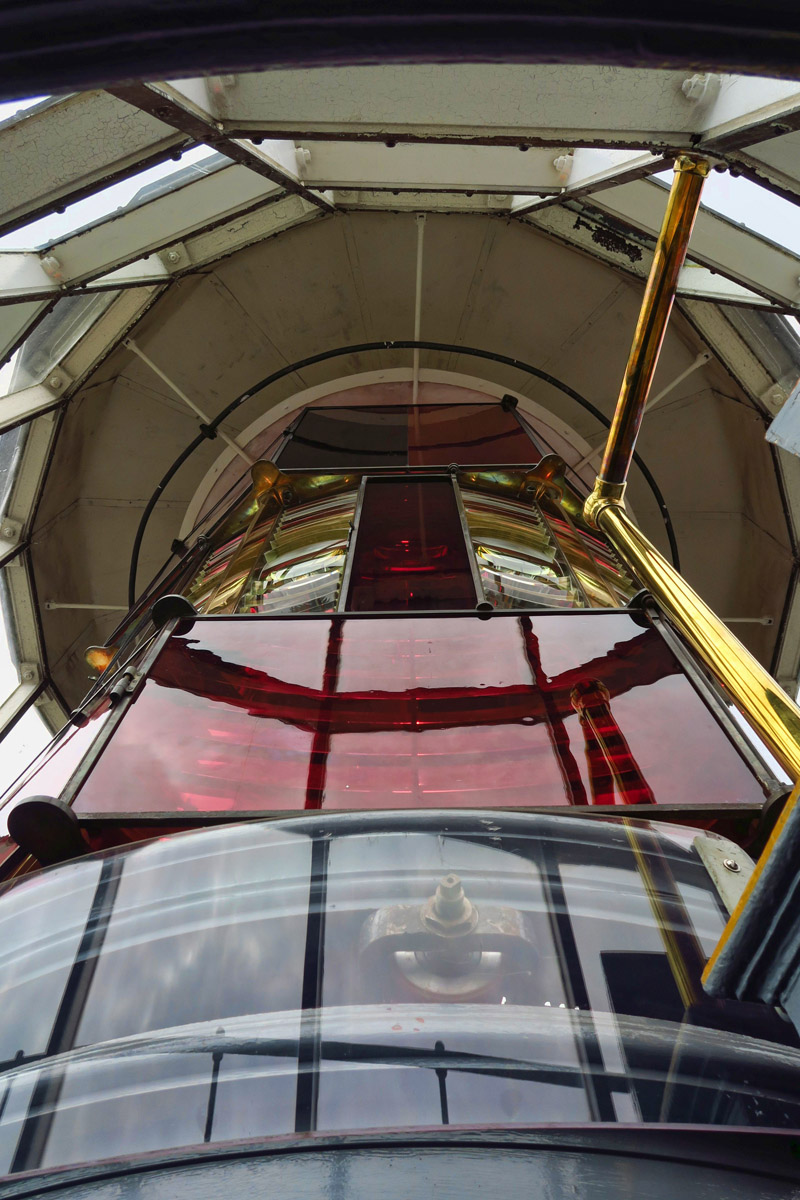 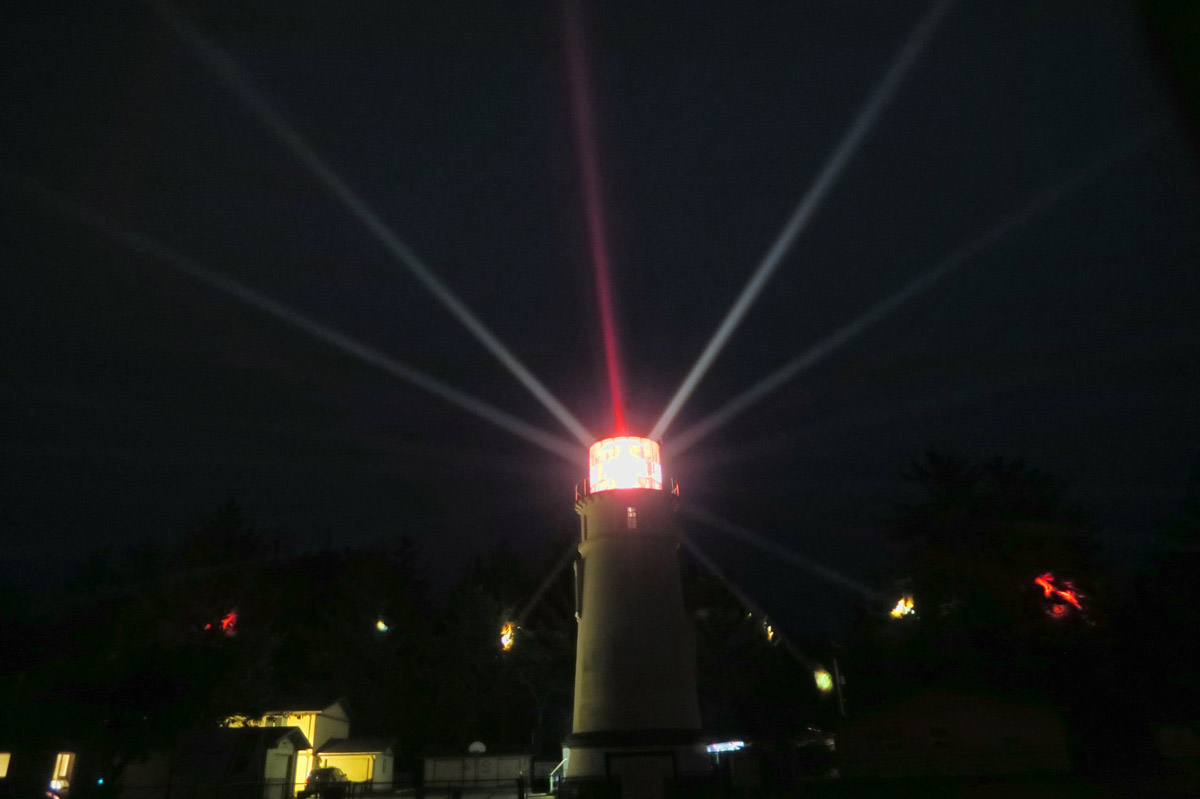 The First Order Fresnel Lens has 24 bulls eye panels which dictate the characteristic, or “signature,” 2 white flashes and 1 red flash every 15 seconds as the lens completes rotation every two minutes. You can see the red and white “spotlights” reflecting in the trees in the background as the light beams revolve. 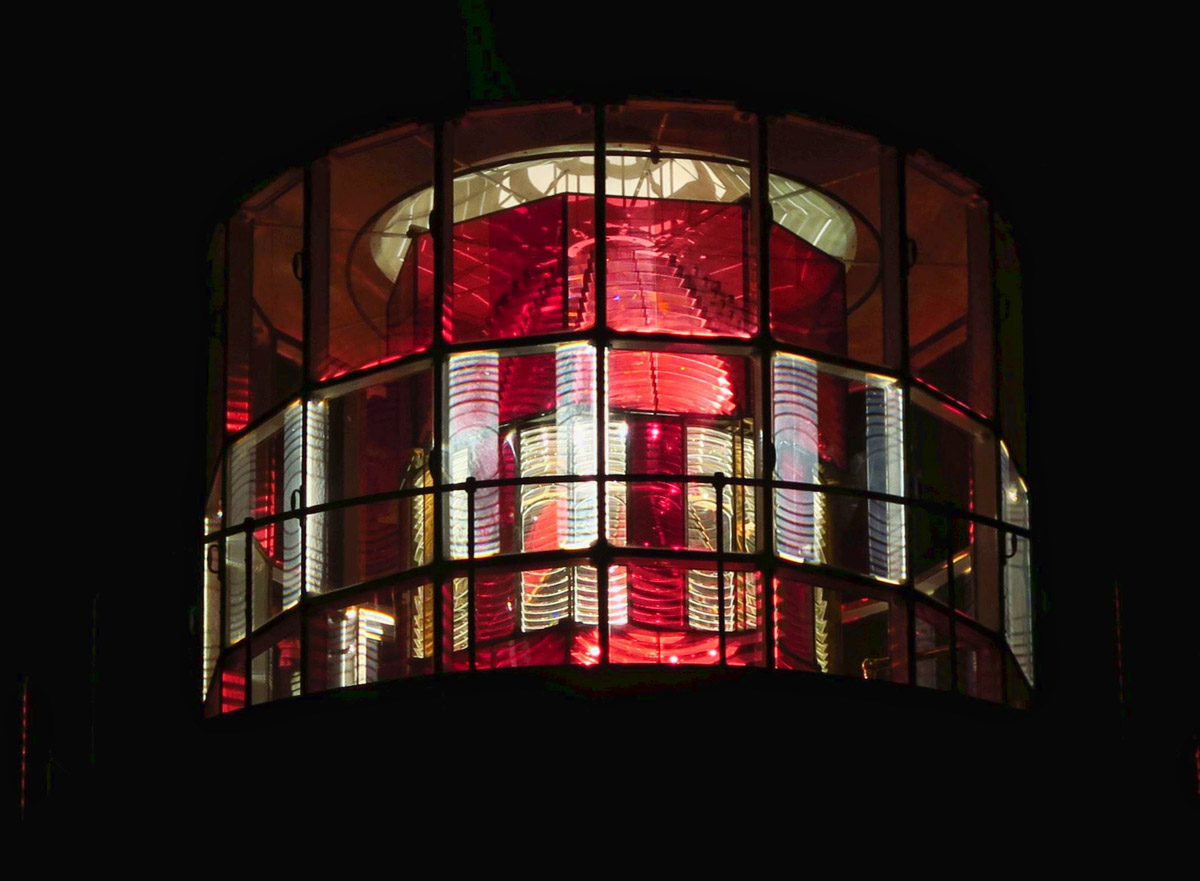 I didn’t get to see the lens at night last time, so I wanted to come back and see it after dark. Even more spectacular! 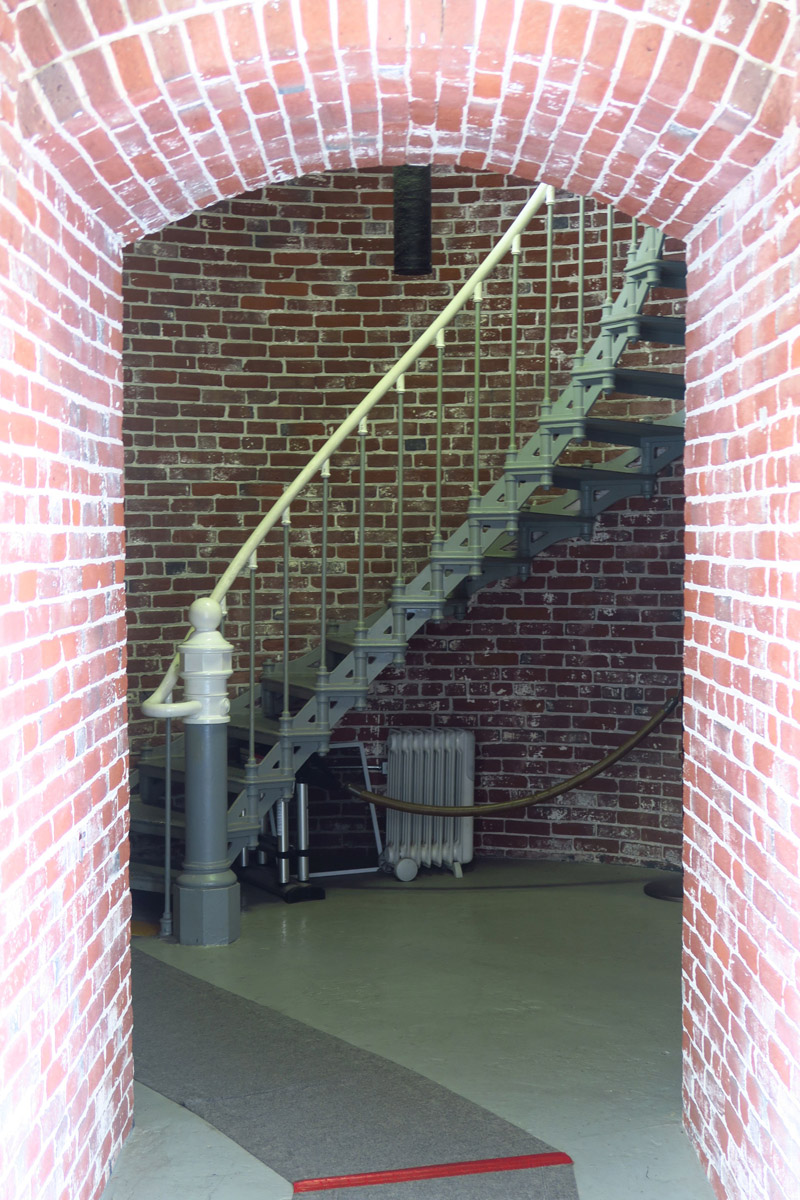 Do you know which state has the most lighthouses? Michigan! 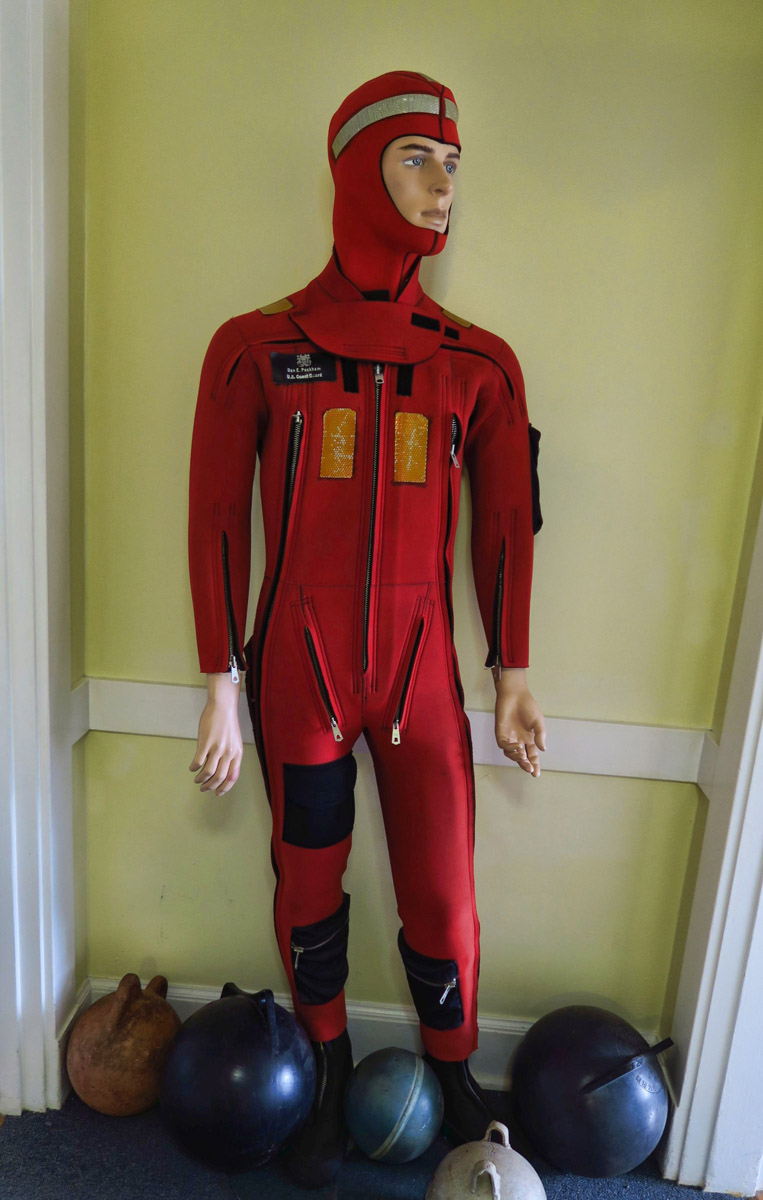 Got to admire the craftsmanship of this 1950’s wetsuit in the Umpqua Light Museum…clearly made for both the right-handed as well as left-handed male. 😉

The little coastal towns are dripping with charm for the tourist-minded. Lots of curio shops. Picturesque marinas with charters for hire. And an abundance of local restaurants advertising “Readers Choice Winner! Best Fish & Chips on the Oregon Coast!” But I wasn’t much of a shopper even back in my “metropolitan-ite” days. Even less so now. And one can only stroll so many docks dreaming of a life at sea before they all start to look alike and the catchy boat names become redundant. That only leaves one thing….all the charming restaurants, which I can’t afford…physically even more than financially. 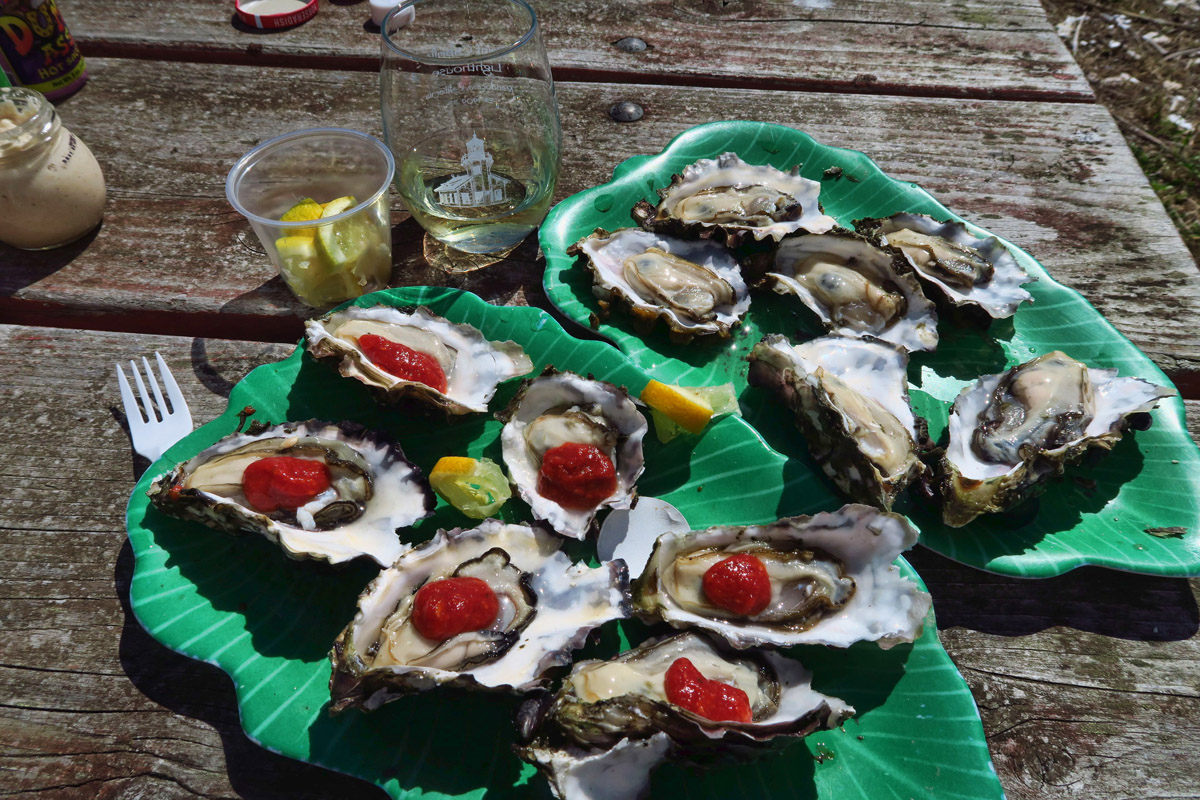 Umpqua is known for its “Triangle Oysters,” farmed in the triangle formed by the jetty and the Umpqua River. (Check out my new “lighthouse” wine glass!”) 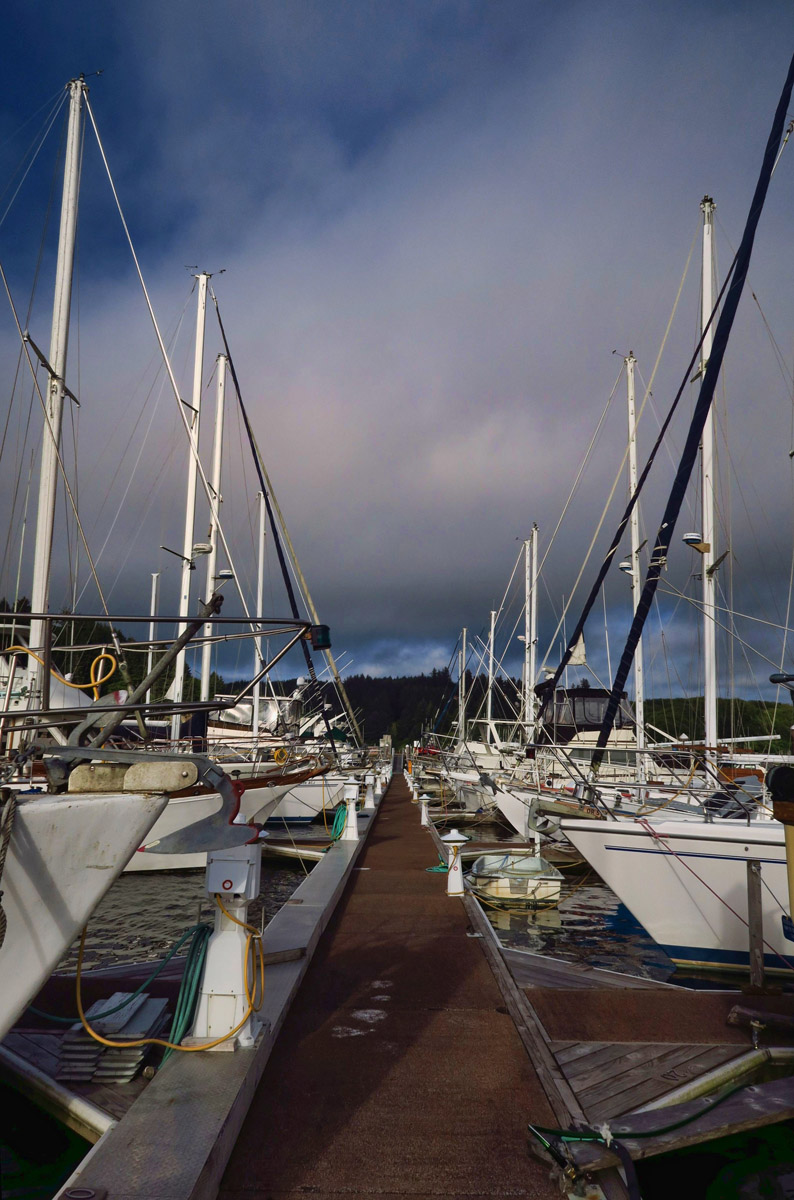 Salmon Harbor Marina and RV Park makes a great place to stay long the coast if you want to see the lighthouse and sample the “aquaculture” of the oyster beds. Only $15/nt. 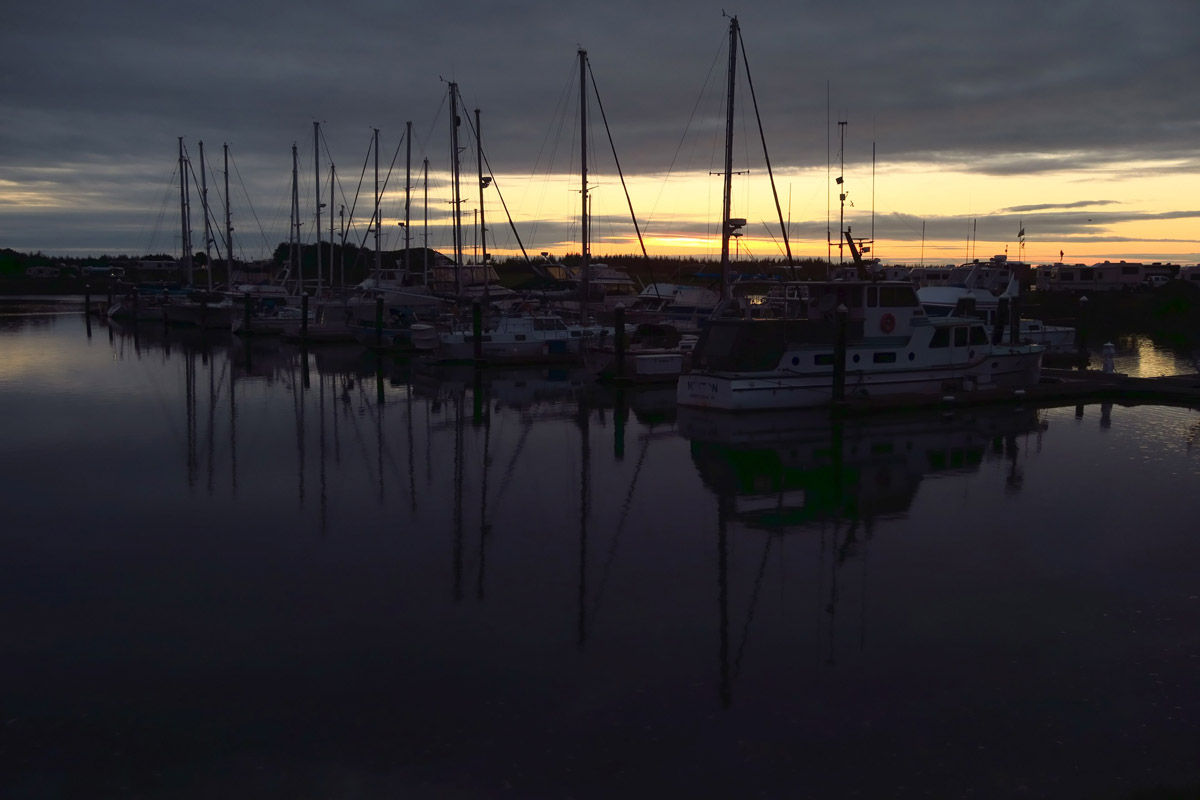 The lovely ambiance held me captive for four nights.

So I’ve temporarily reached my limit of coastal charm. I’ve had enough of the Salt Water Taffy shops, the smell of fried Fish & Chips coming from the ventilators, and tourist shops selling rainbow-colored windsocks and glittered jelly fish encapsulated in glass made in China. The breaking point for me is the Bandon Beach tee-shirt emblazoned with the slogan, “Classy, Sassy, and a little bit Smart Assy.” 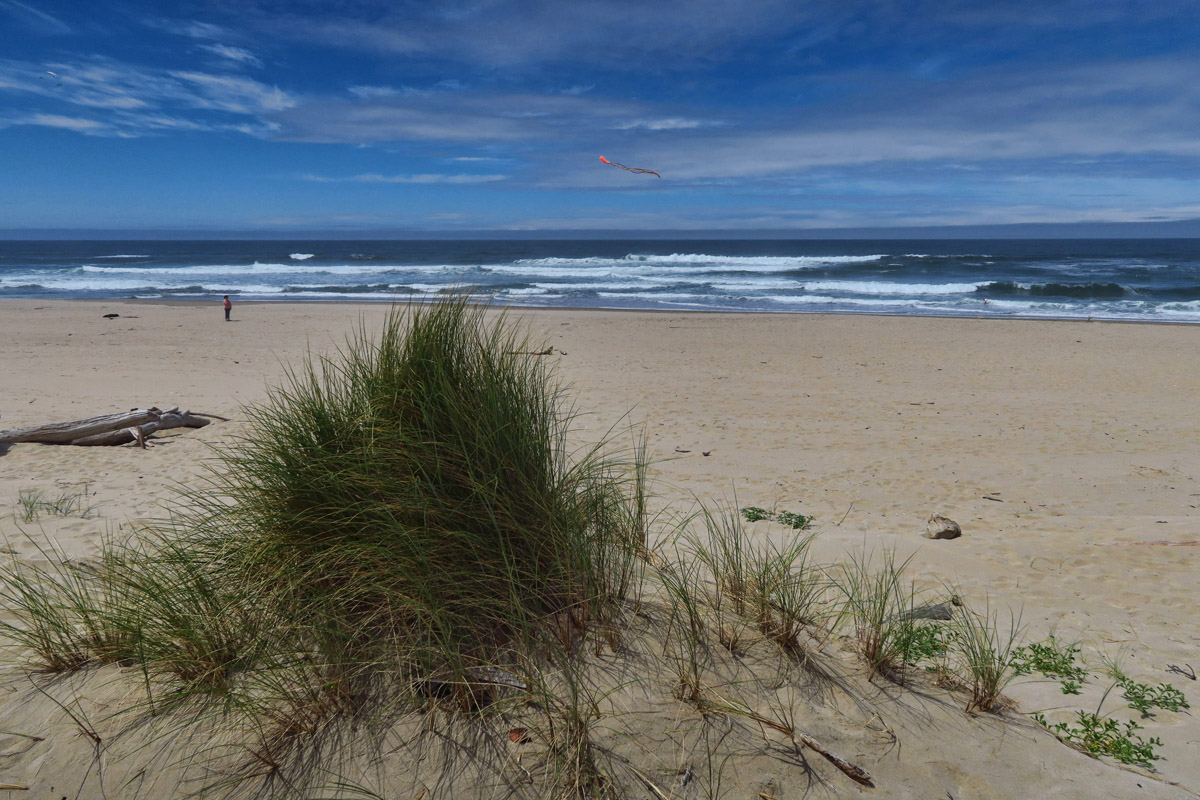 Kite-flying, an art along the Oregon Coast. 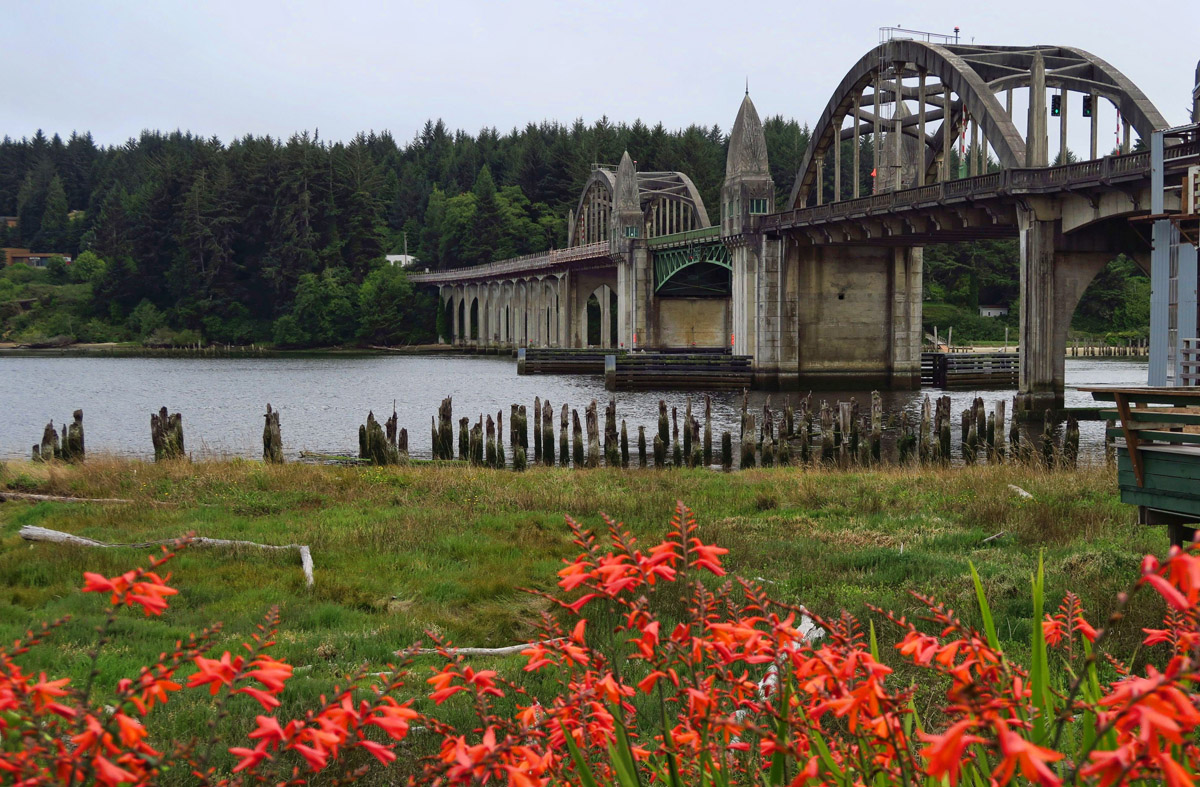 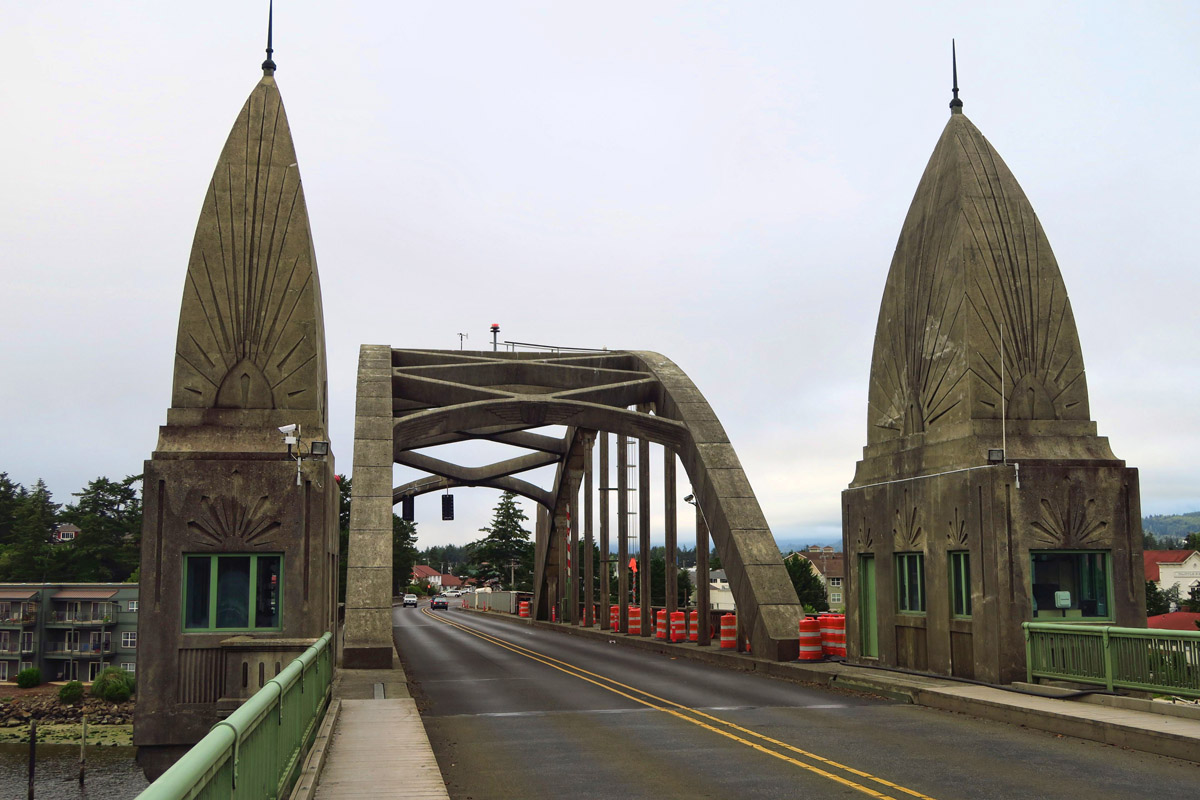 One of five Oregon Bridges designed by Conde B McCullough as part of the Coastal Bridges Project built during the Great Depression as a part of Roosevelt’s New Deal. 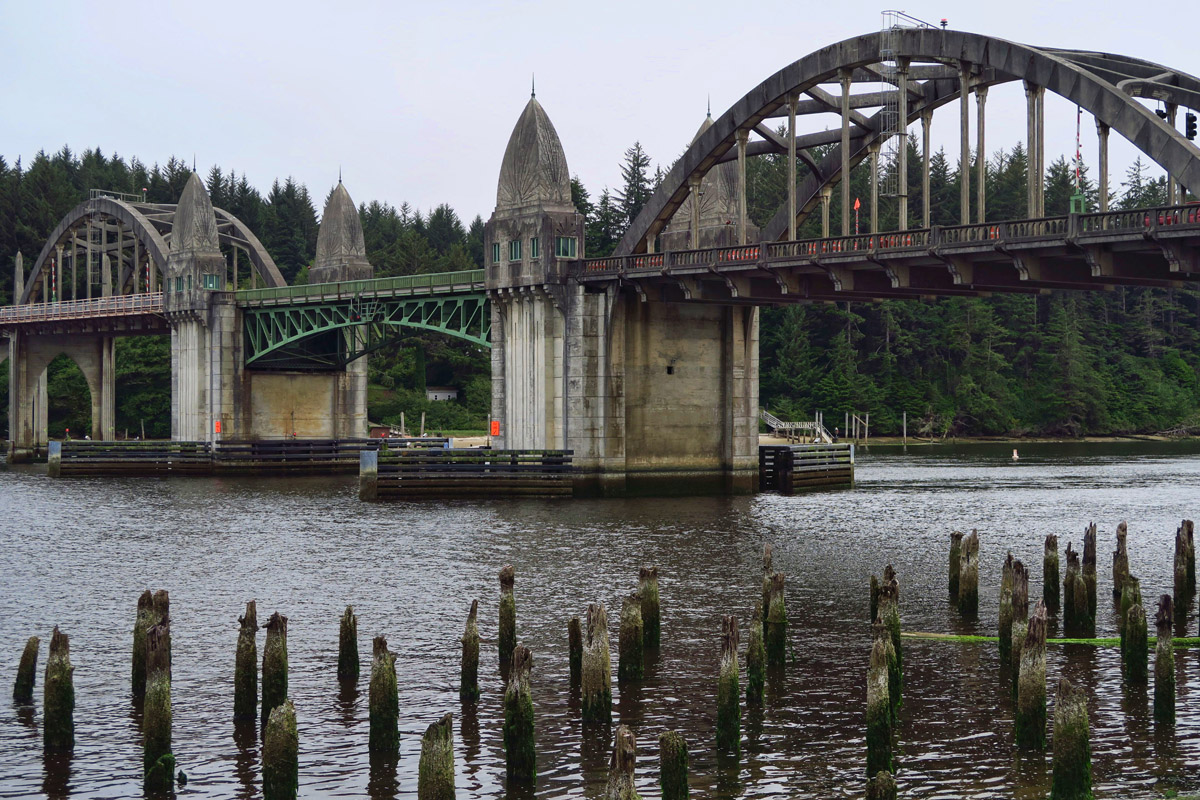 A “double bascule” drawbridge, it still functions today to allow fishing boats and sailboats with tall rigging to travel upriver.

Even the moody, broody fog is starting to get to me. I’m cold, and I’m tired of wearing long pants and a jacket in the summertime. And I am in serious hiking withdrawal. If I continue on at this pace, I fear I won’t enjoy the second half of the summer, for which I have planned more of the same.

I need a temporary break from the coast. Time for me to retreat into the woods…before the coast is clear.