During my 2014 tour through the Pacific Northwest, I must have thought a thousand times, “Oh, Don would LOVE this place!” Some of our greatest outdoor adventures have been trips we have taken together, from my Dad’s cross country road trips from Texas to Knotts Berry Farm as kids, to tent camping in the wilds of Alaska. We even rented a nine-speed manual gear shift RV with a steering wheel on the “wrong side” to tour the South Island of New Zealand. So whenever I see a foggy mountaintop or steep, craggy coastline, my mind first turns to these memories of our good times.

So of course, when I get word that Don is on his way, I quickly backtrack down the coast to meet him so I can show him “a few of my favorite things.” 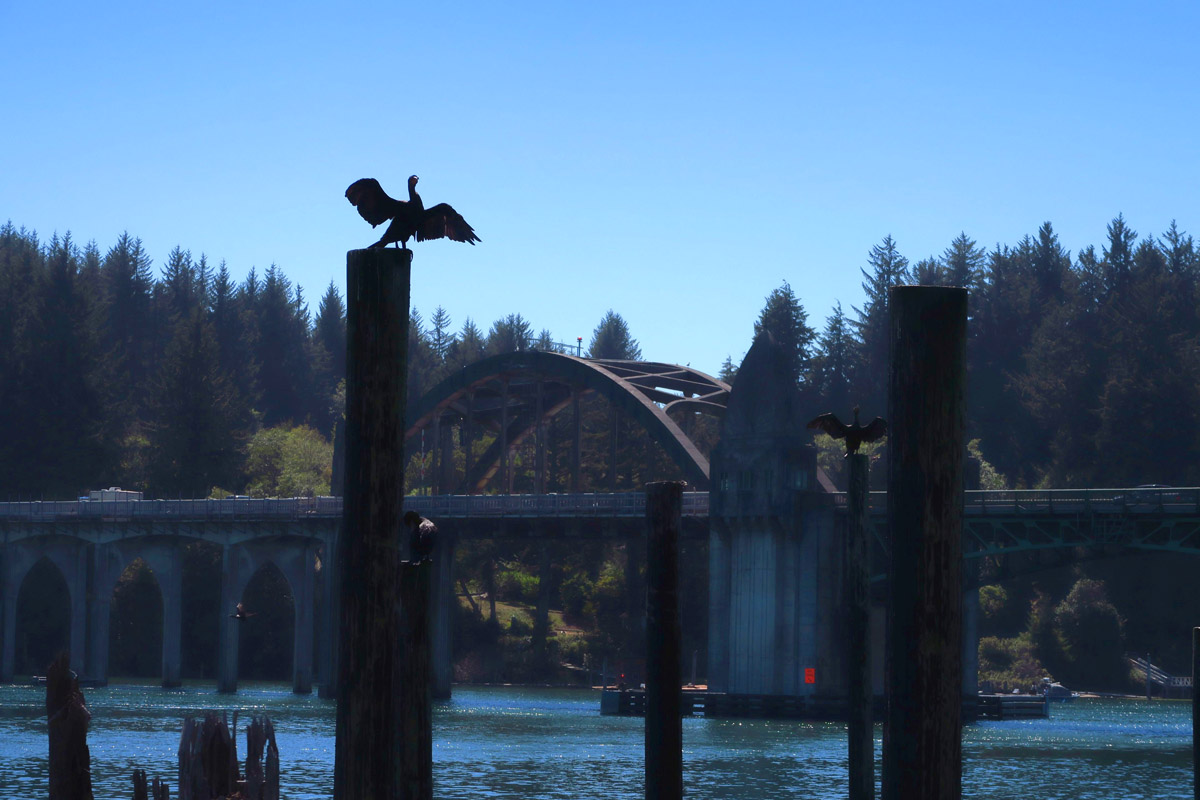 Cormorant dries his wings in front of the Siuslaw River Bridge in Florence. 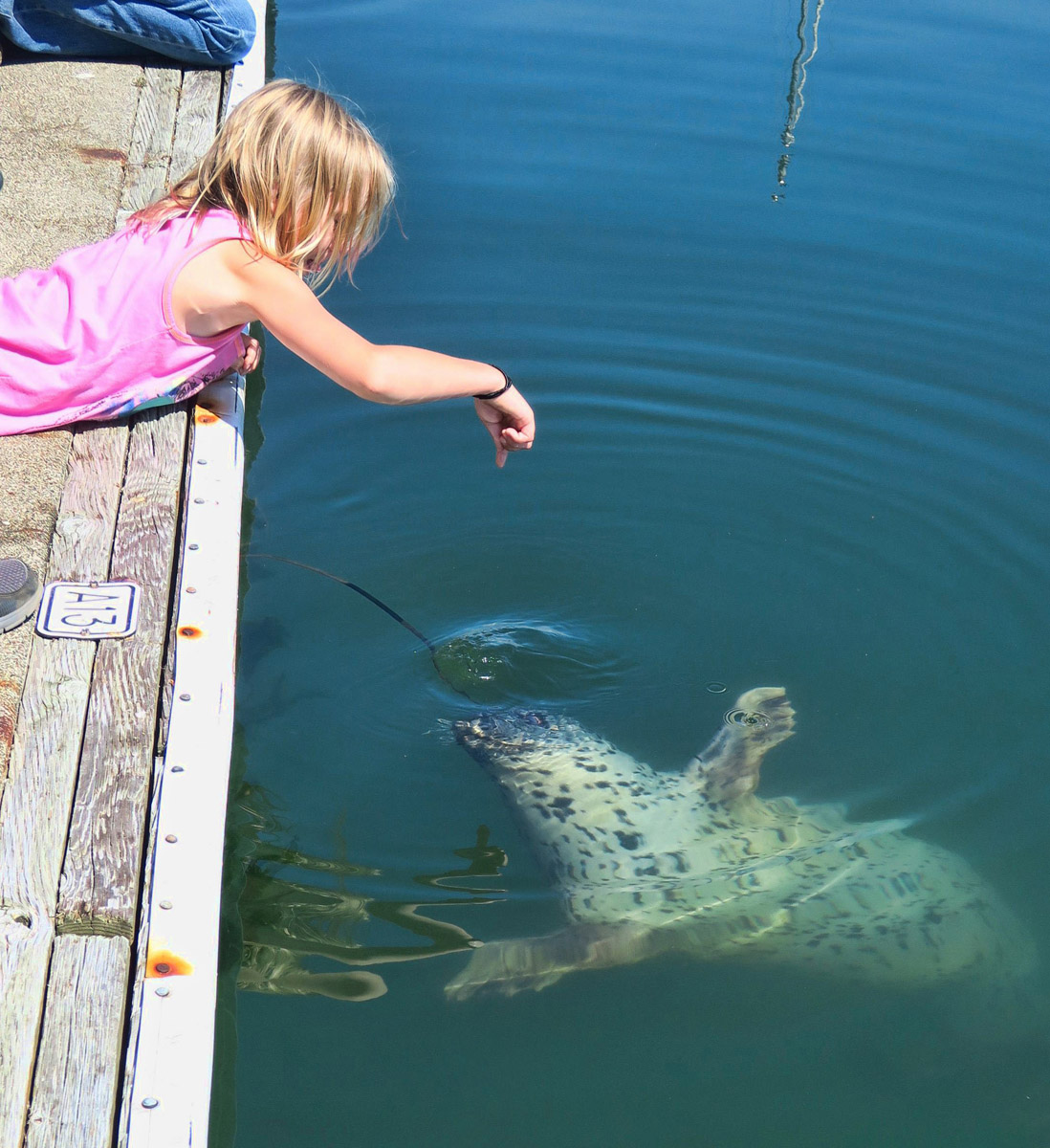 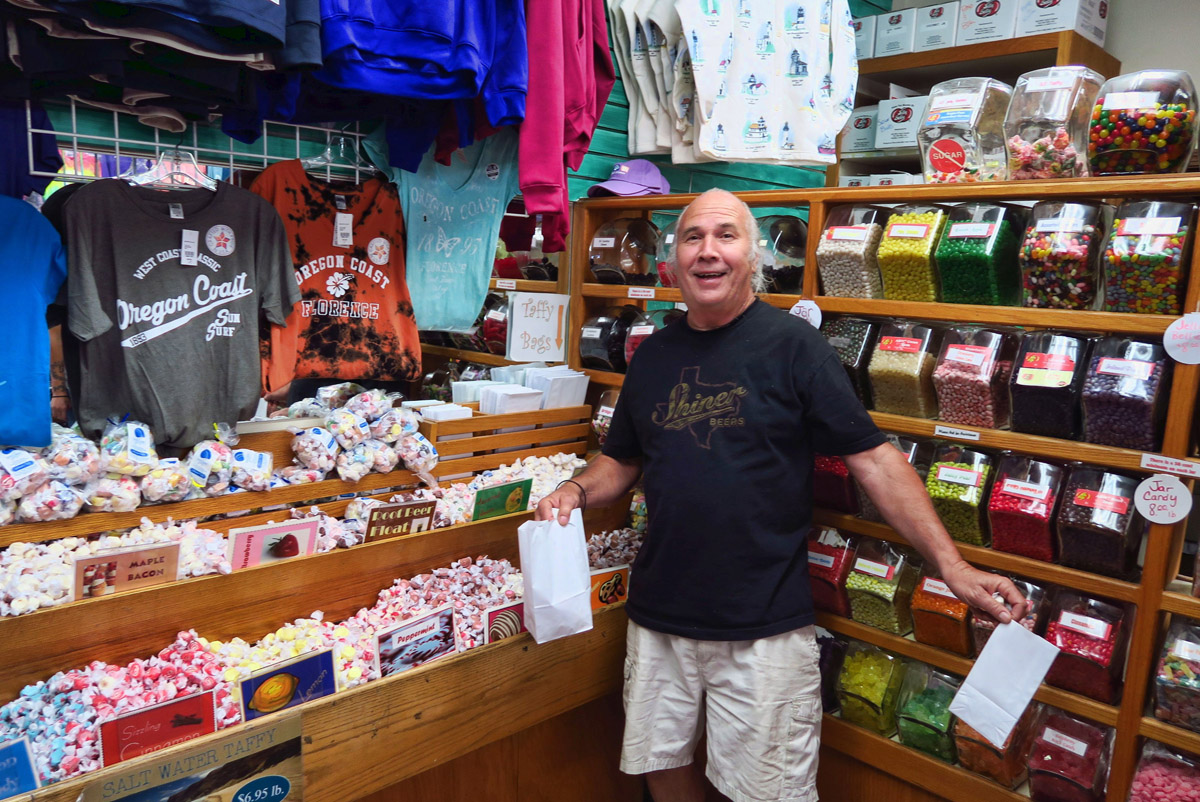 Don has a passion for salt water taffy. He’s come to the right place. 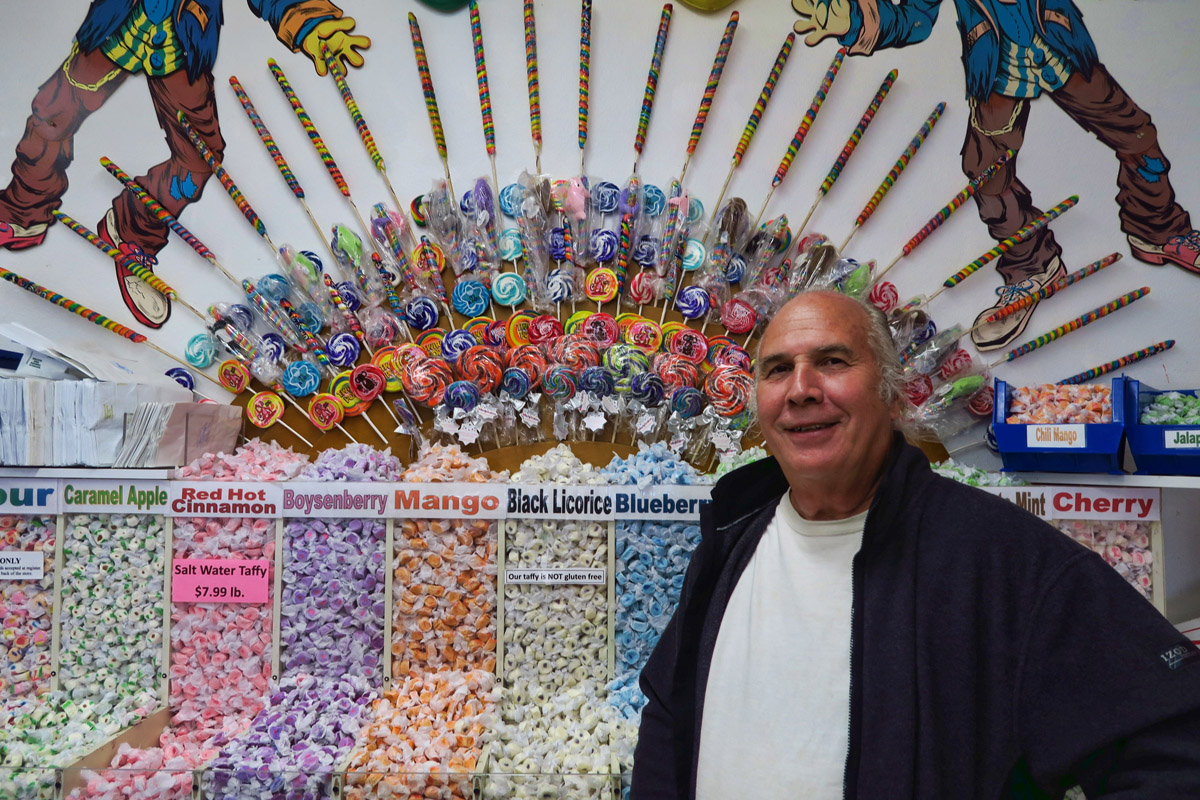 As I have mentioned before, traveling the Oregon Coast has been a challenge this summer. Seems like every single state park has a “Campground Full” shingle hanging out, even midweek. So add to that now trying to find space for TWO rigs, and it has been a bit stressful. Couple that with the fact that I have always been the “follower” and am now in the lead role, not a role I play very easily. As the “middle child” behind an Alpha-male Leo-the-Lion, I learned to enjoy a good game of “Follow the Leader,” as long as I don’t have to lead! 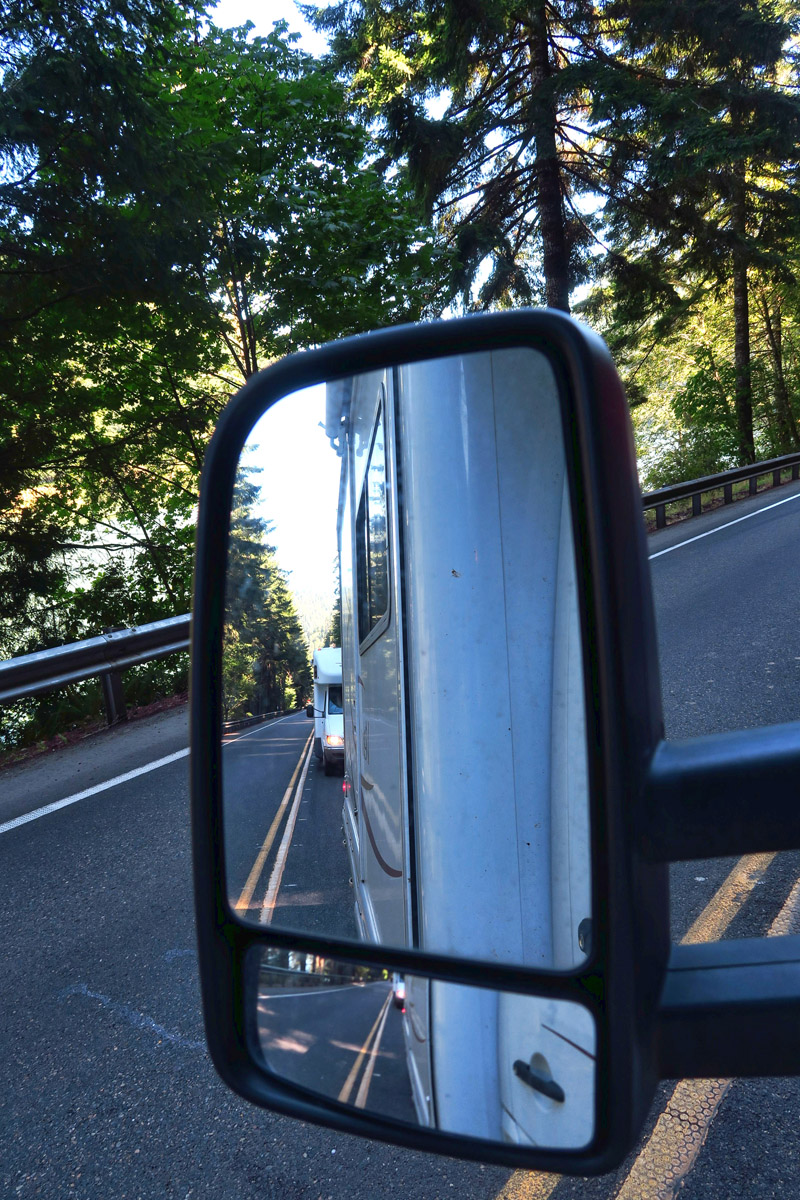 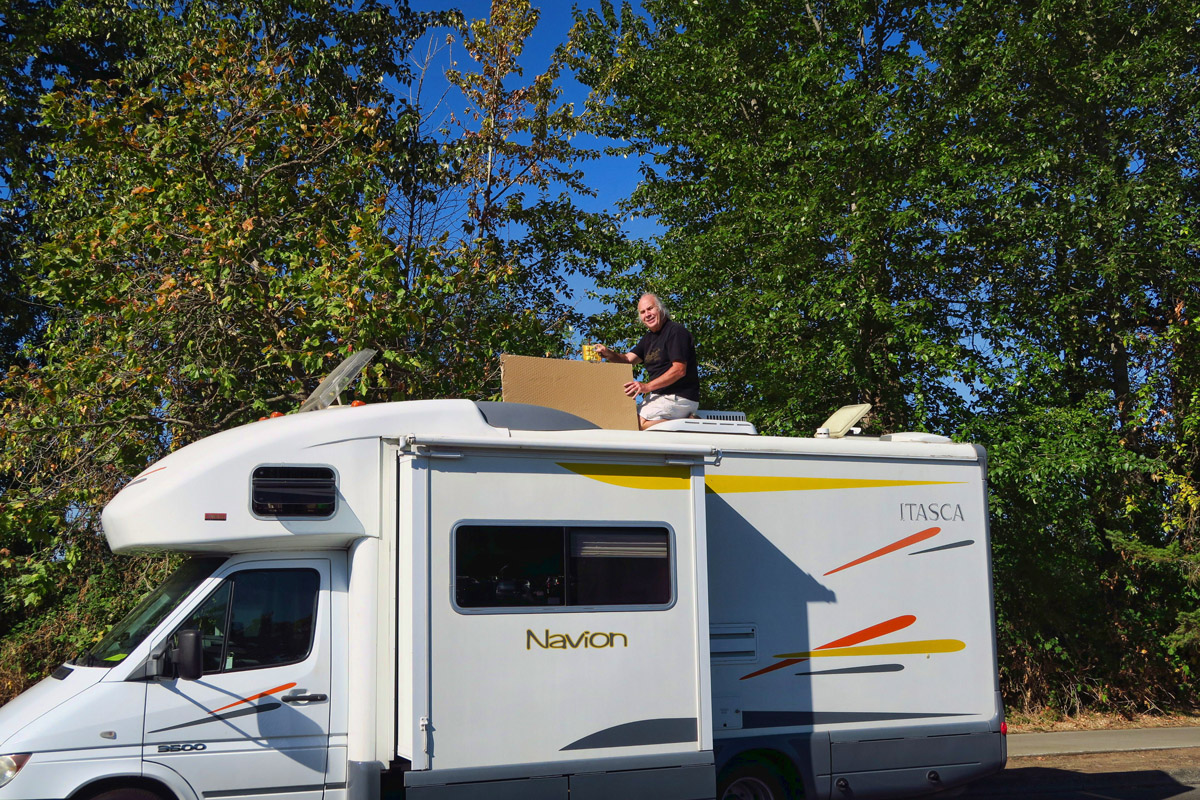 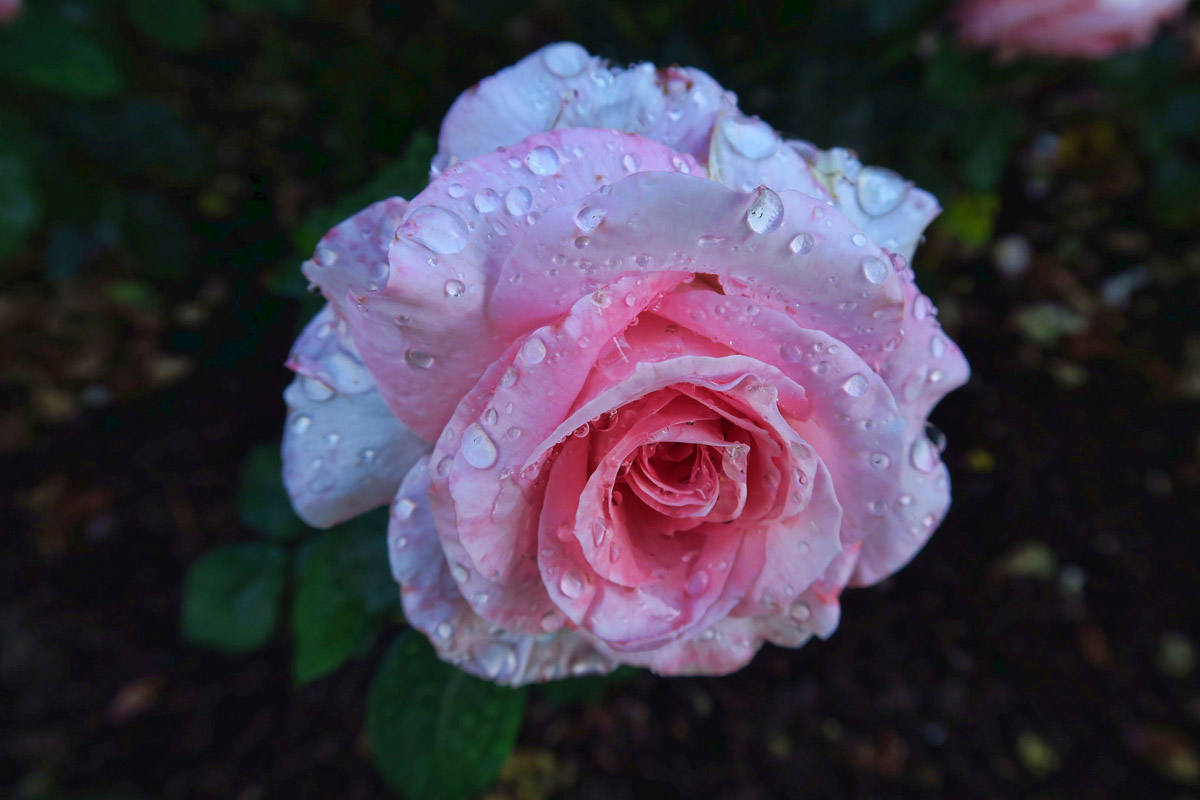 While Don is working on his solar survey, I go for a bike ride to my favorite spot in Eugene, the Owen Rose Garden. 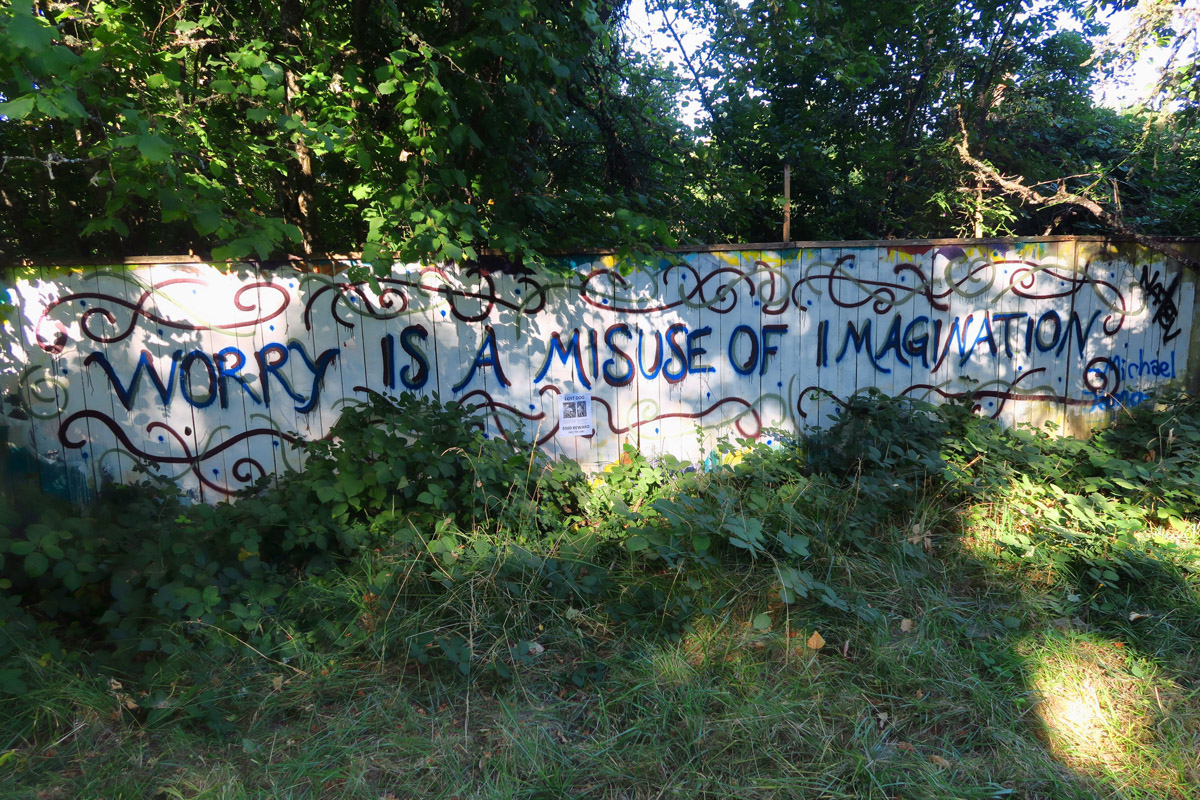 Seen along the Eugene bike path. 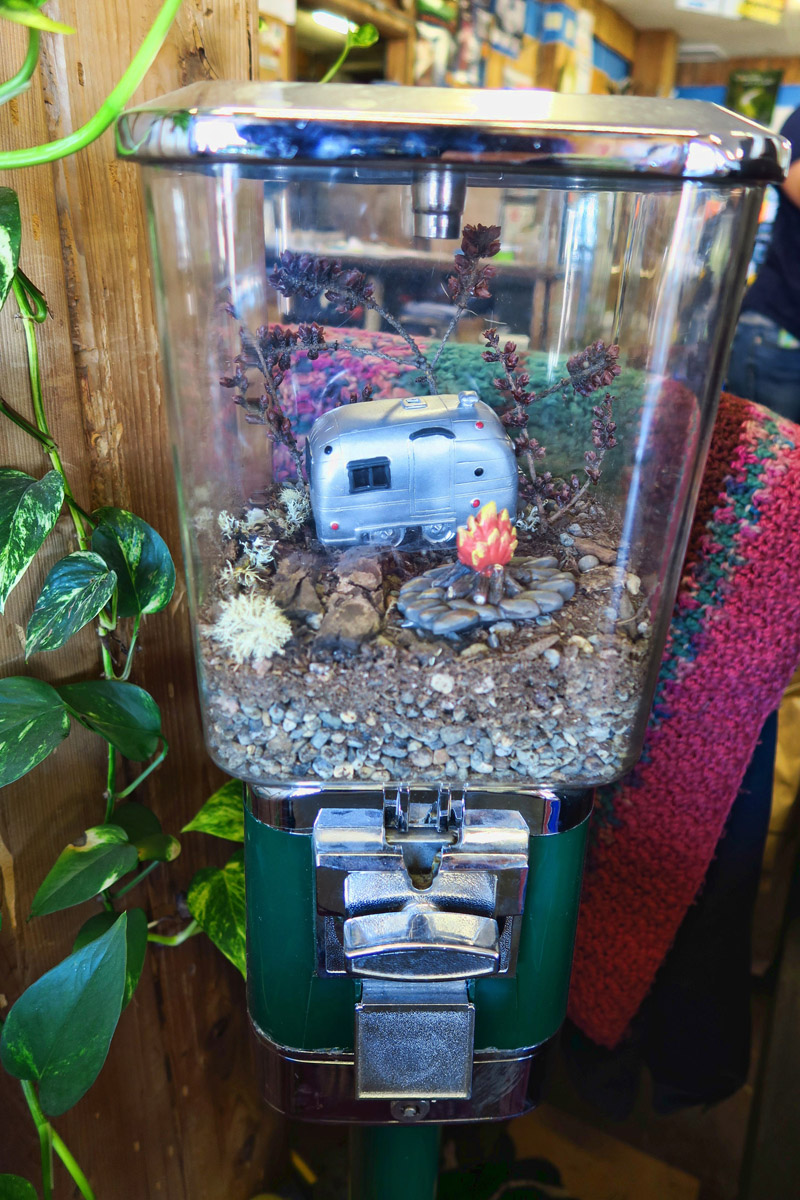 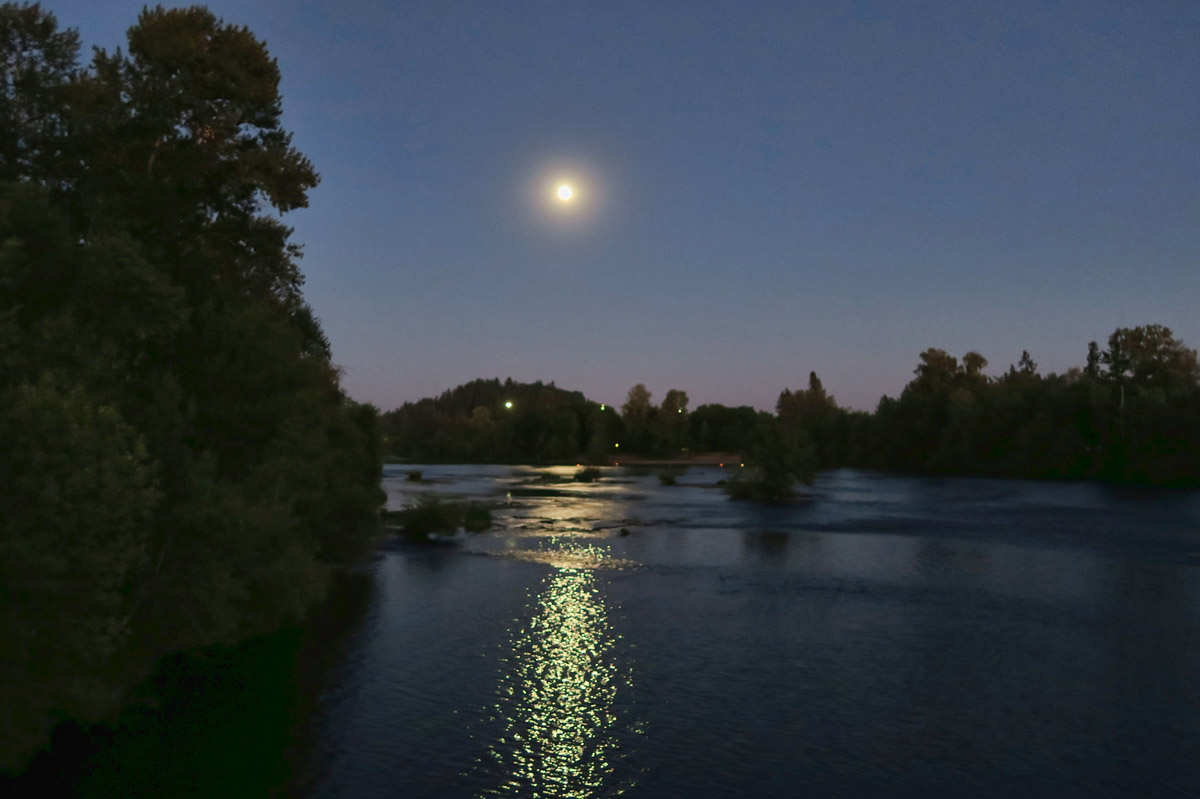 We’ve had to get a bit inventive in finding places to park, like the fenced in gravel dry camping lot of Newport Marina, which happens to be right next door to the Rogue Brewery. How fortuitous! 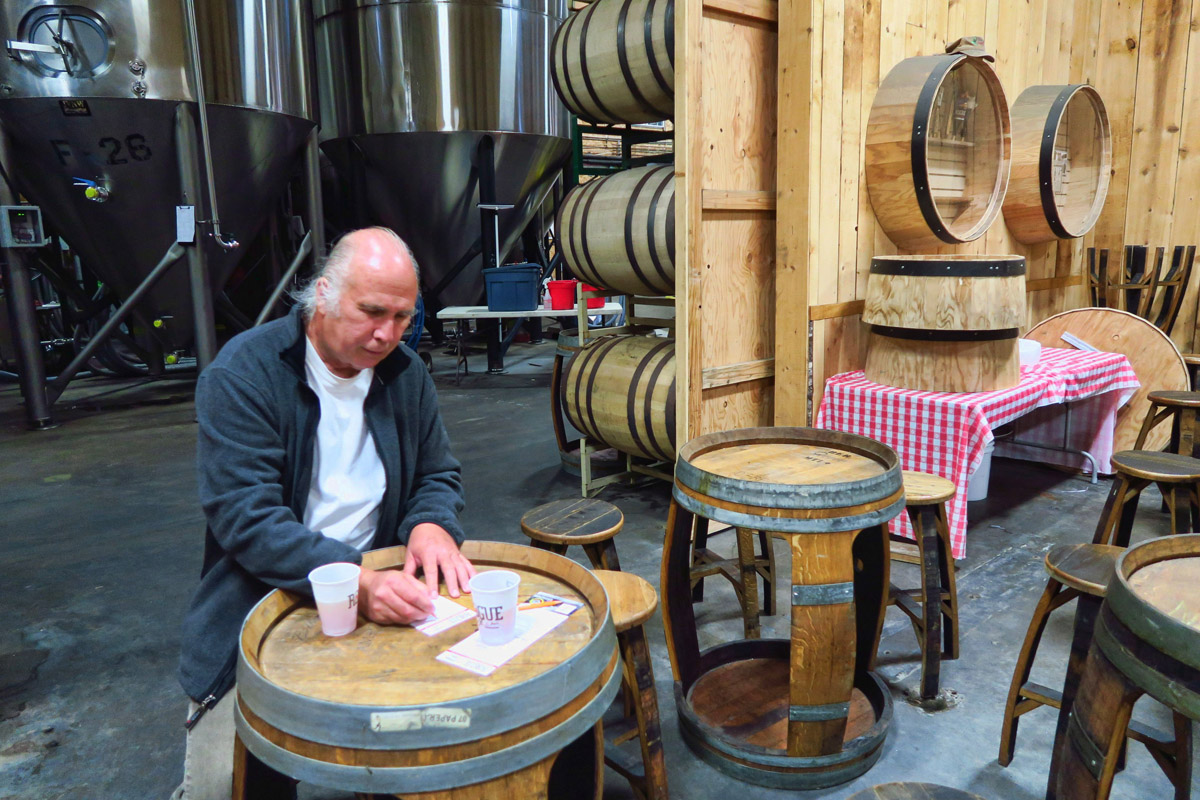 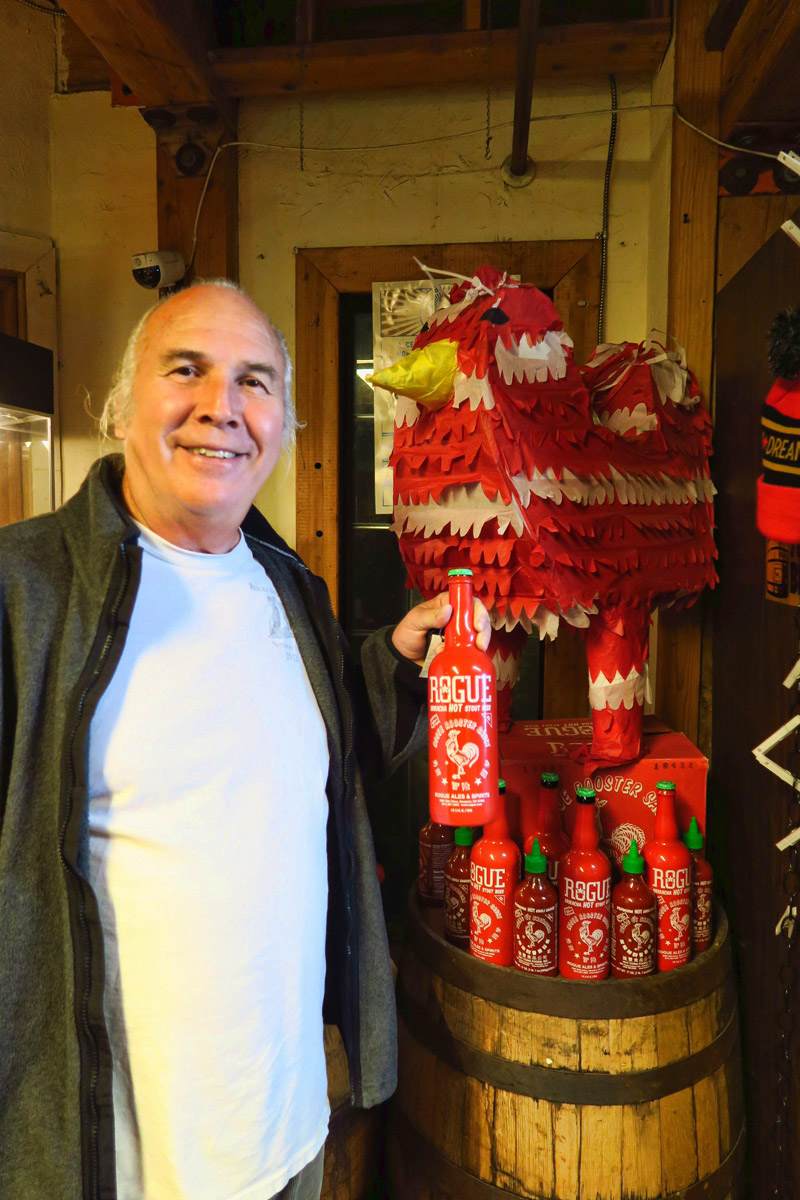 Rogue has a new beer…Sriracha Rooster Hot Sauce. Bought a bottle, but haven’t tried it yet. 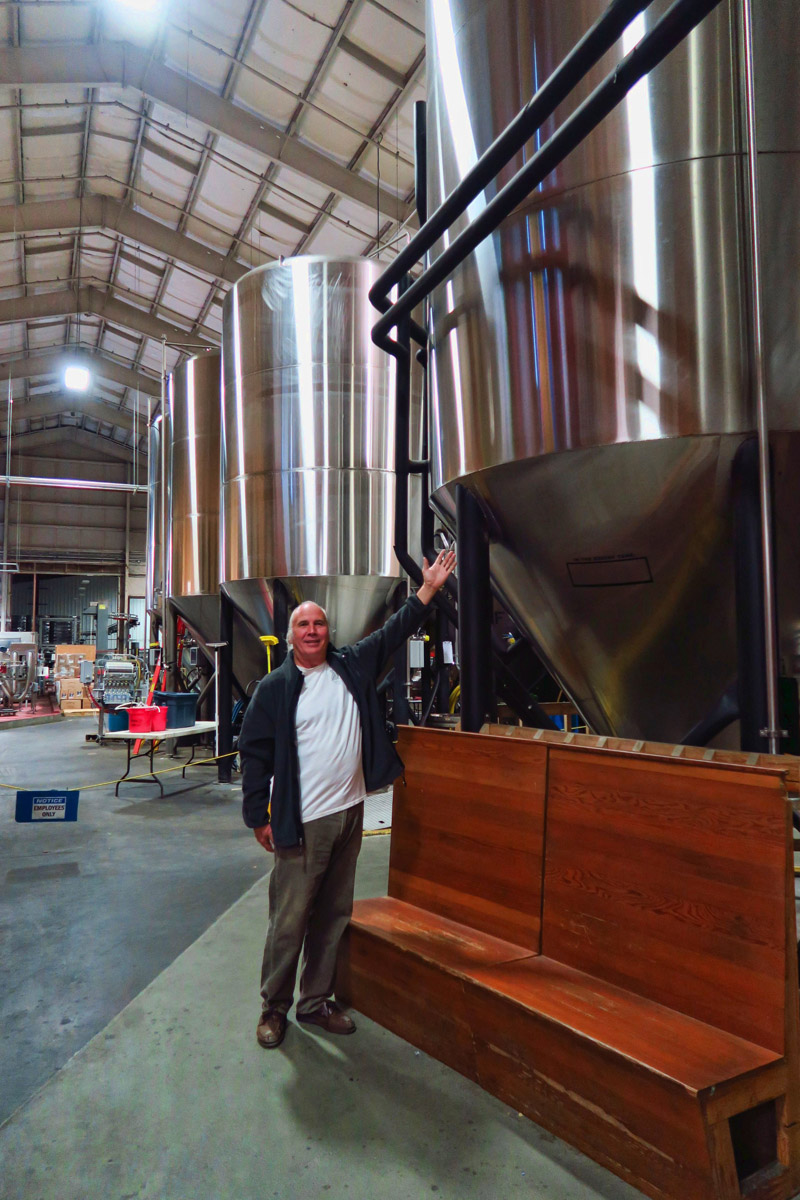 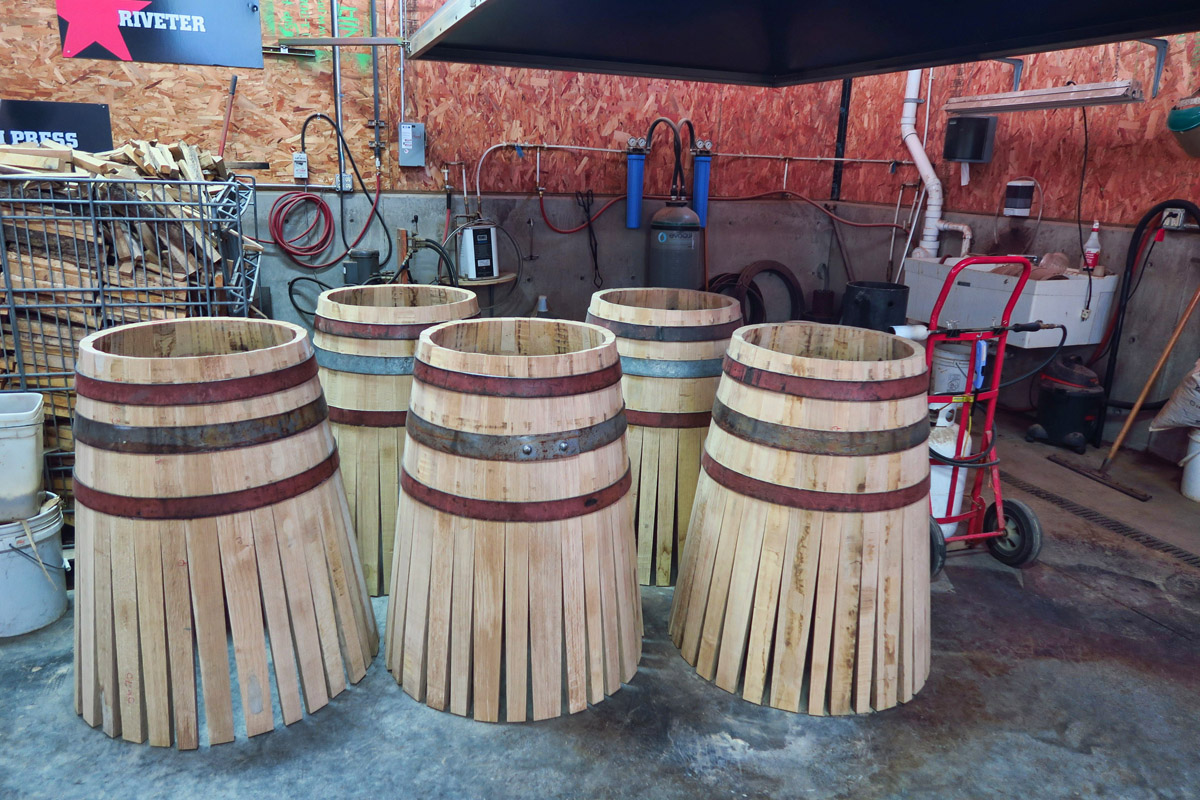 Not only does Rogue have a distillery, but they even make their own barrels by hand. Their “Rolling Thunder” barrel aged Imperial Stout was best beer I’ve had in months. 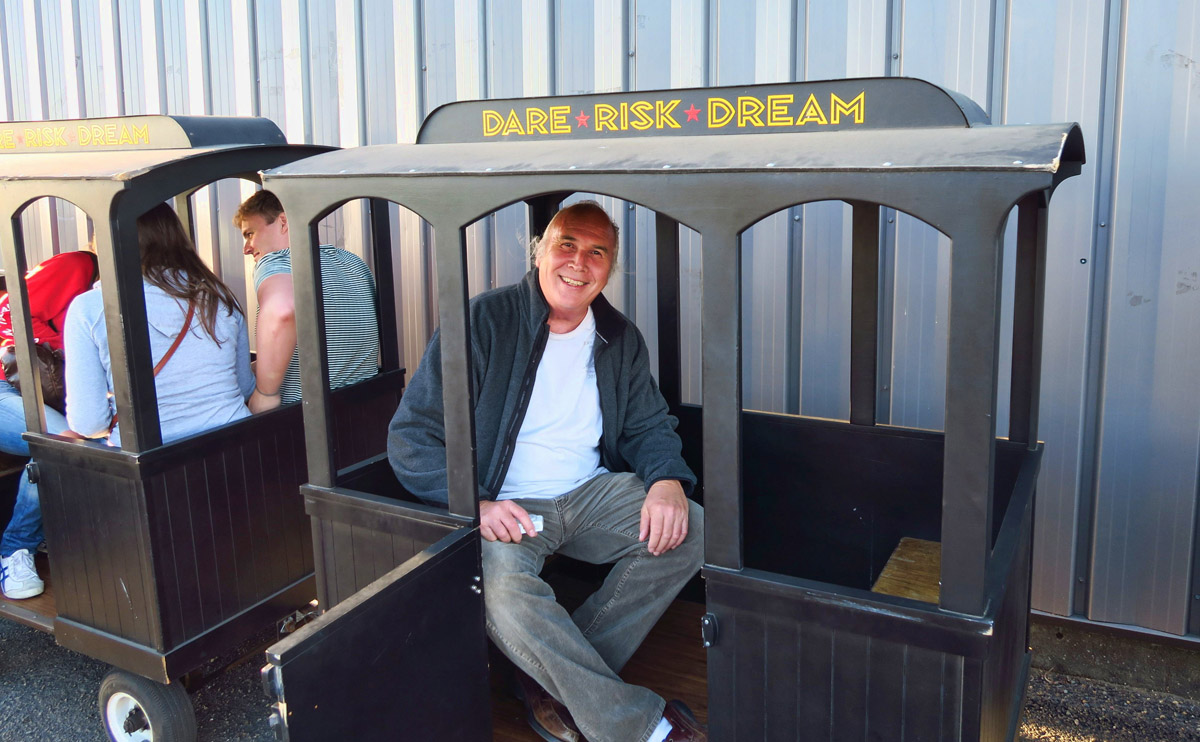 We are transported between brewery and distillery buildings by passenger train. 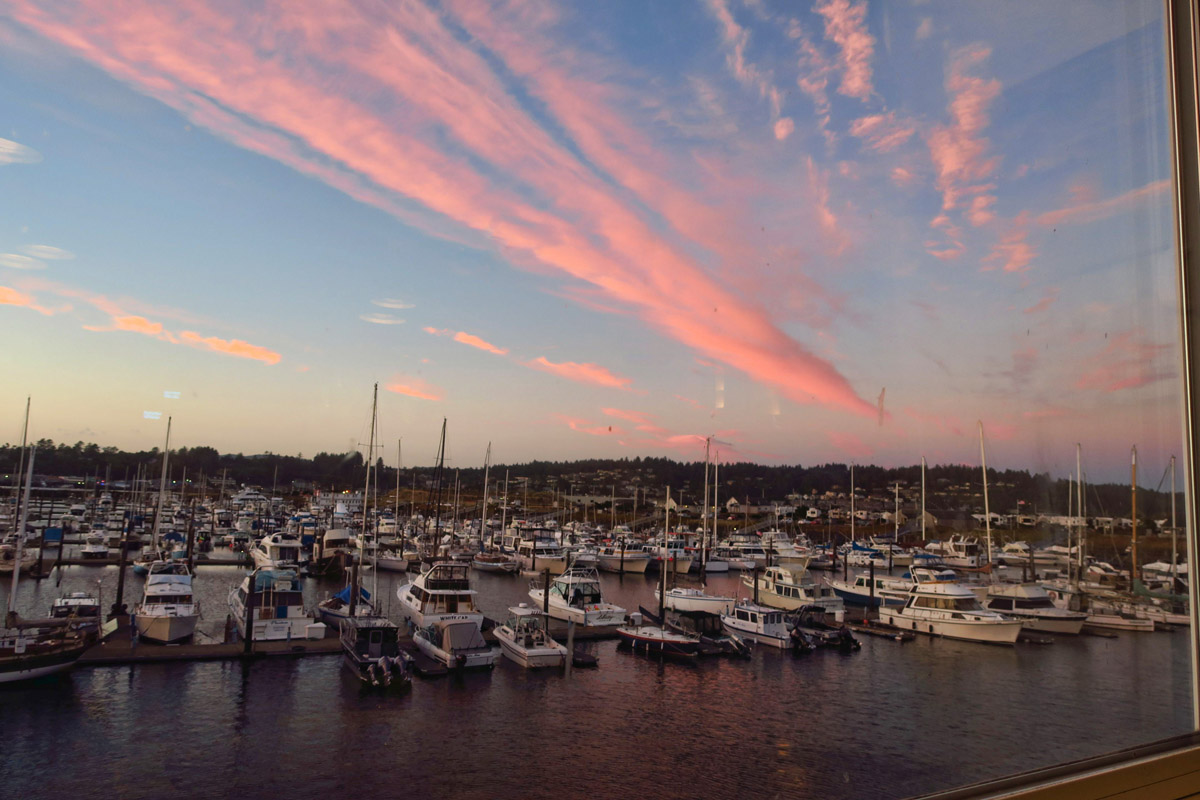 Newport is a great stop along the coast as it offers a picturesque seaport, beautiful beaches nearby, and not one but TWO lighthouses. Any tour of “my favorite things” is going to include a mandatory lighthouse stop as I extol about the beauty of the Fresnel lens! 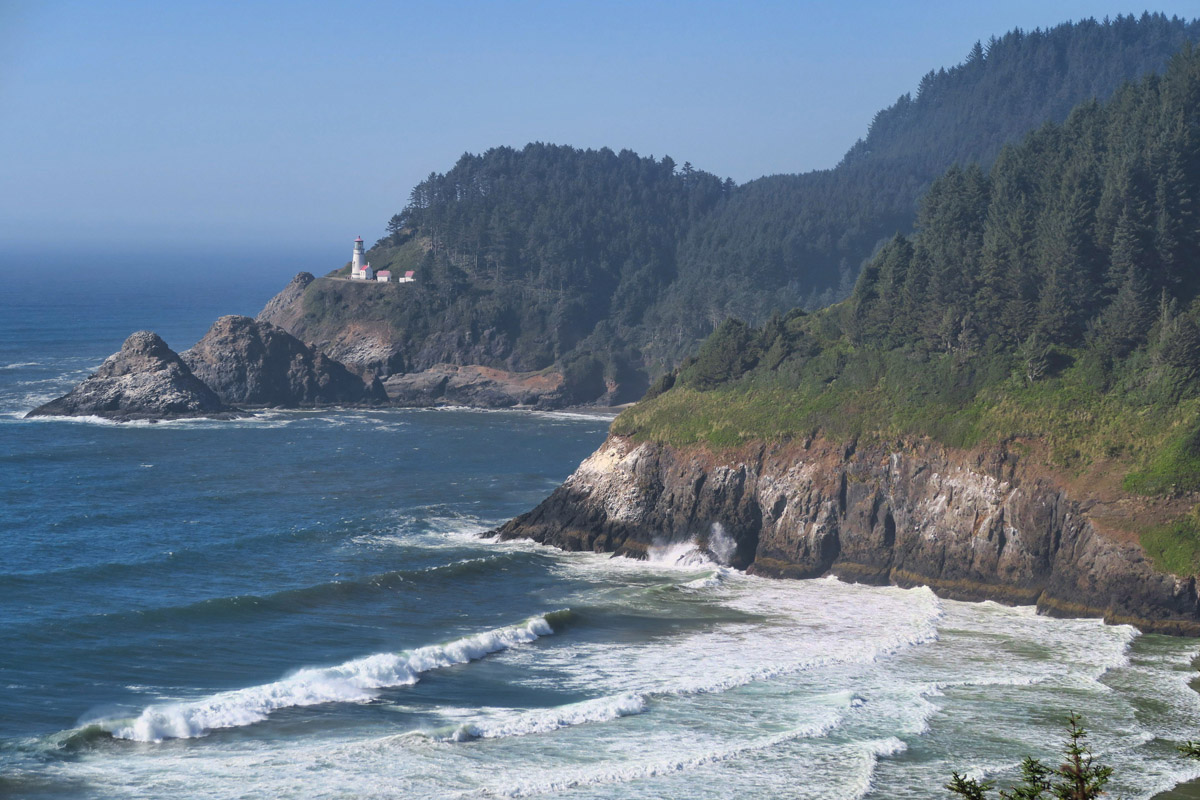 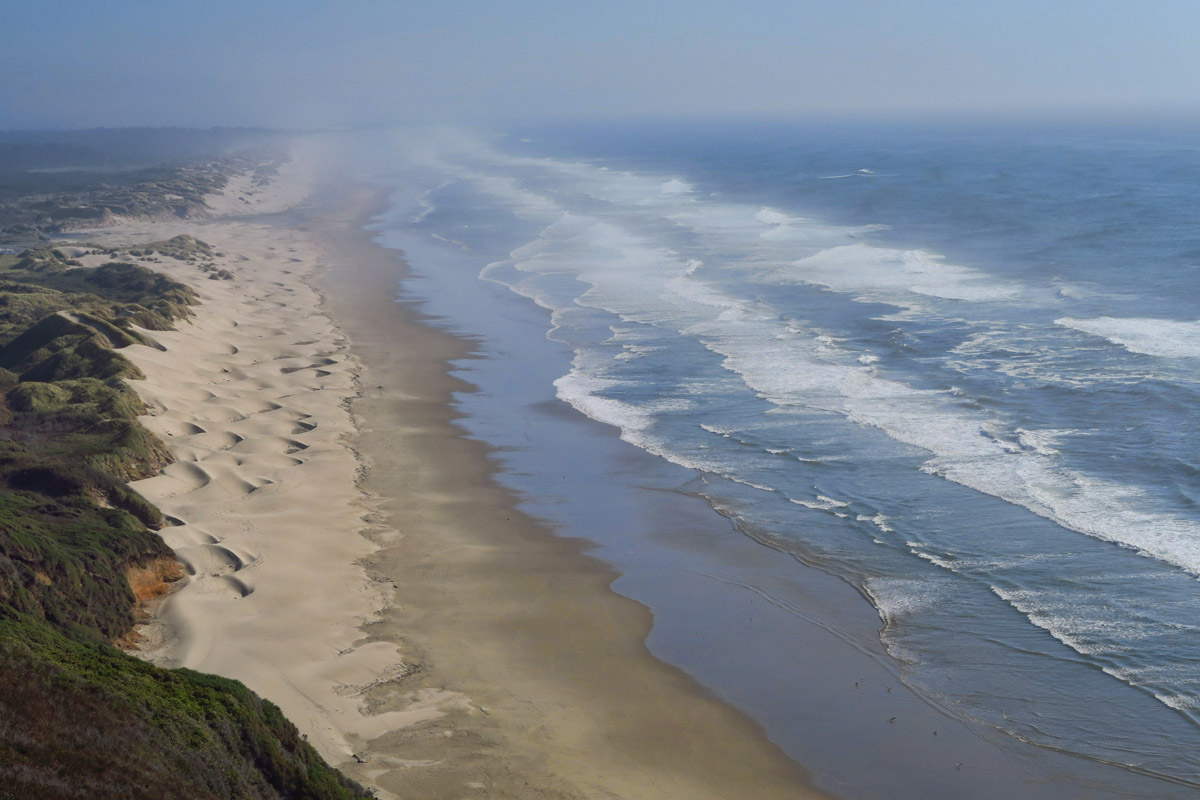 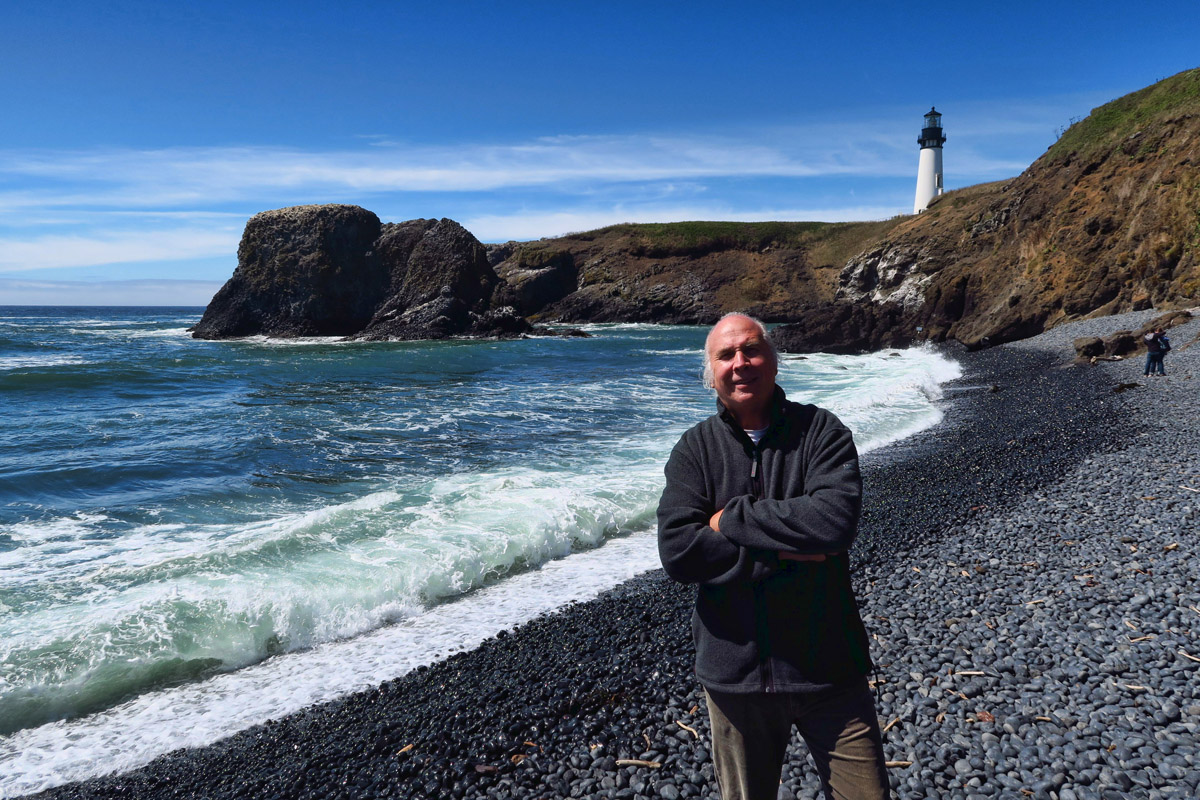 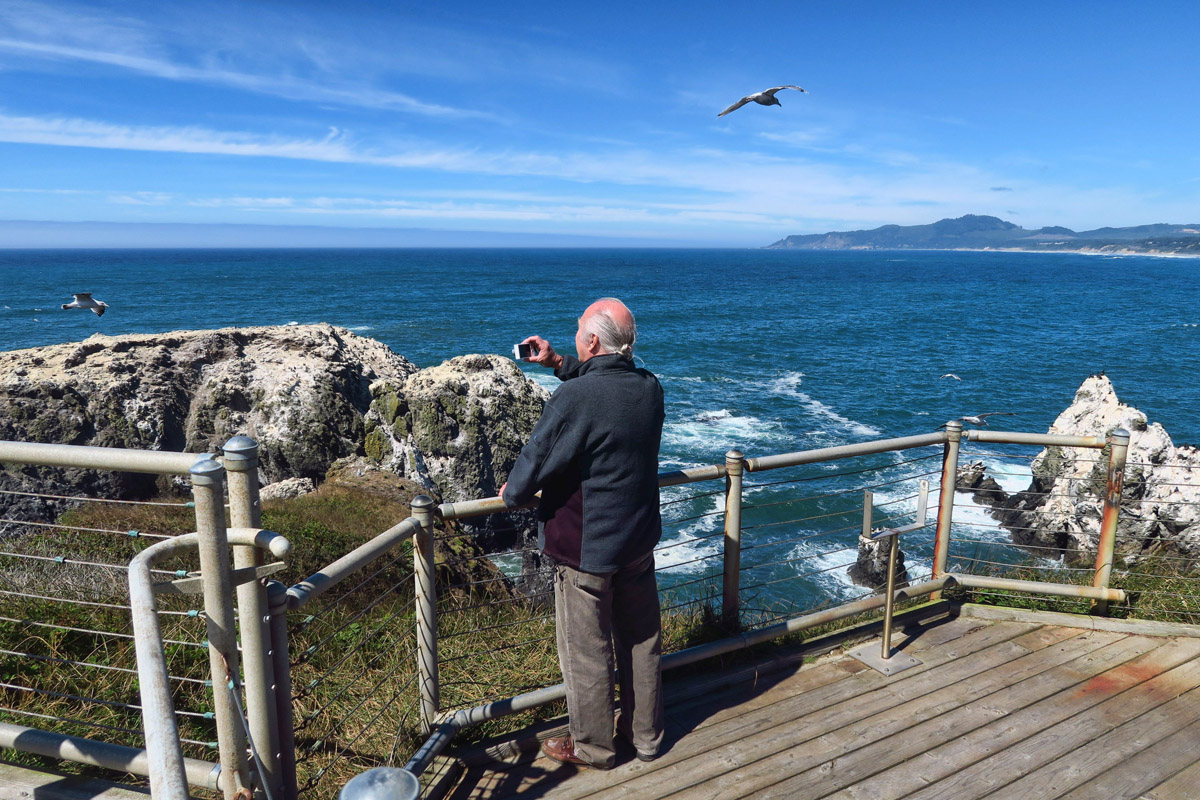 From Yaquina Head Overlook, we see…. 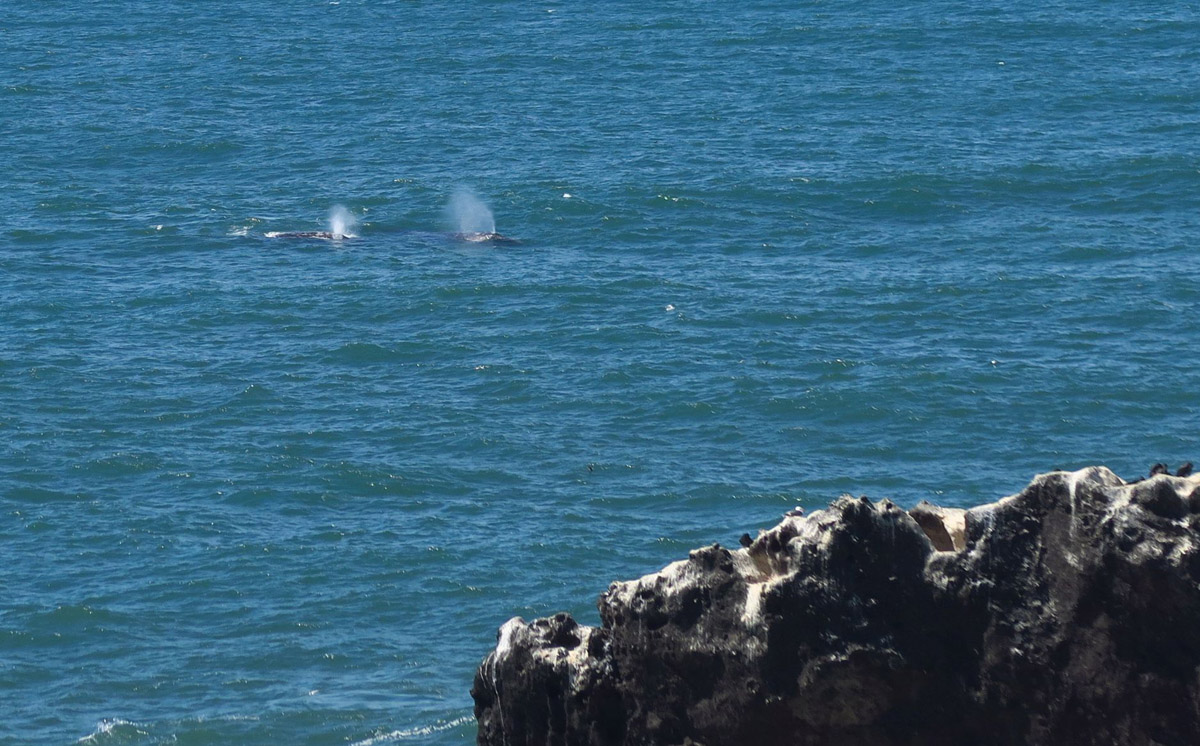 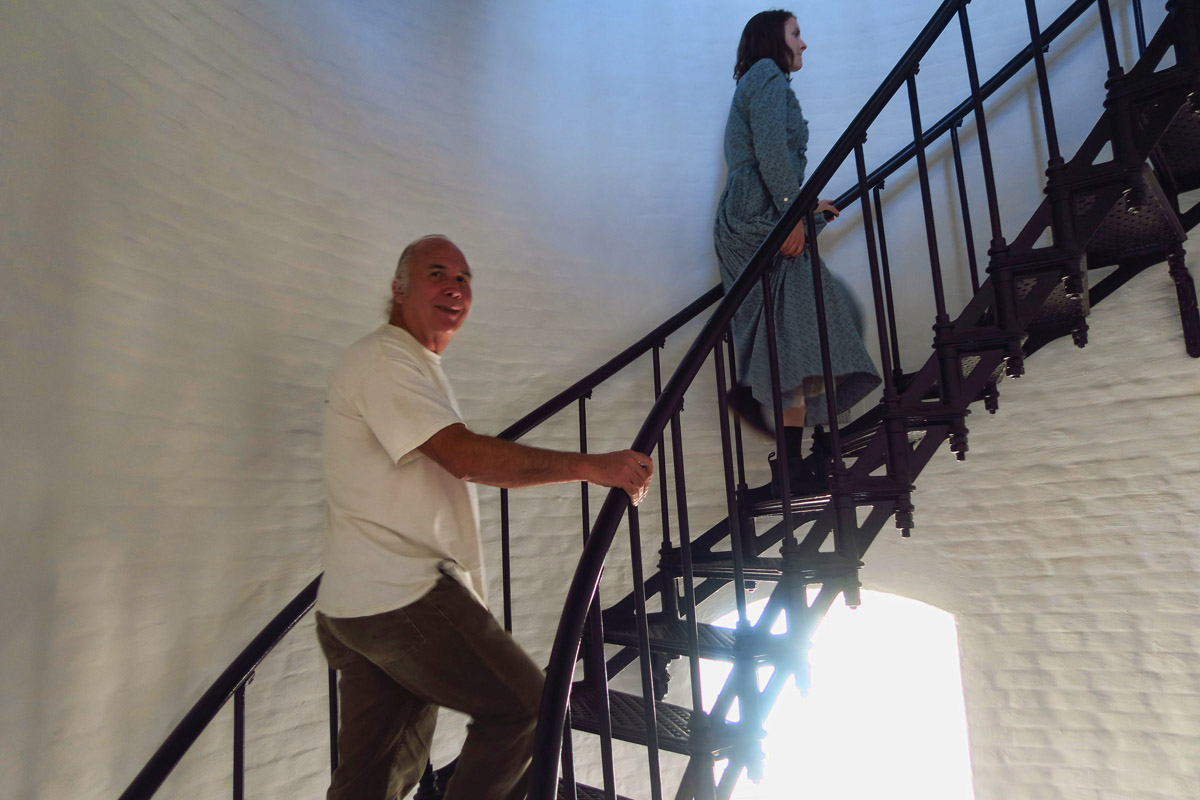 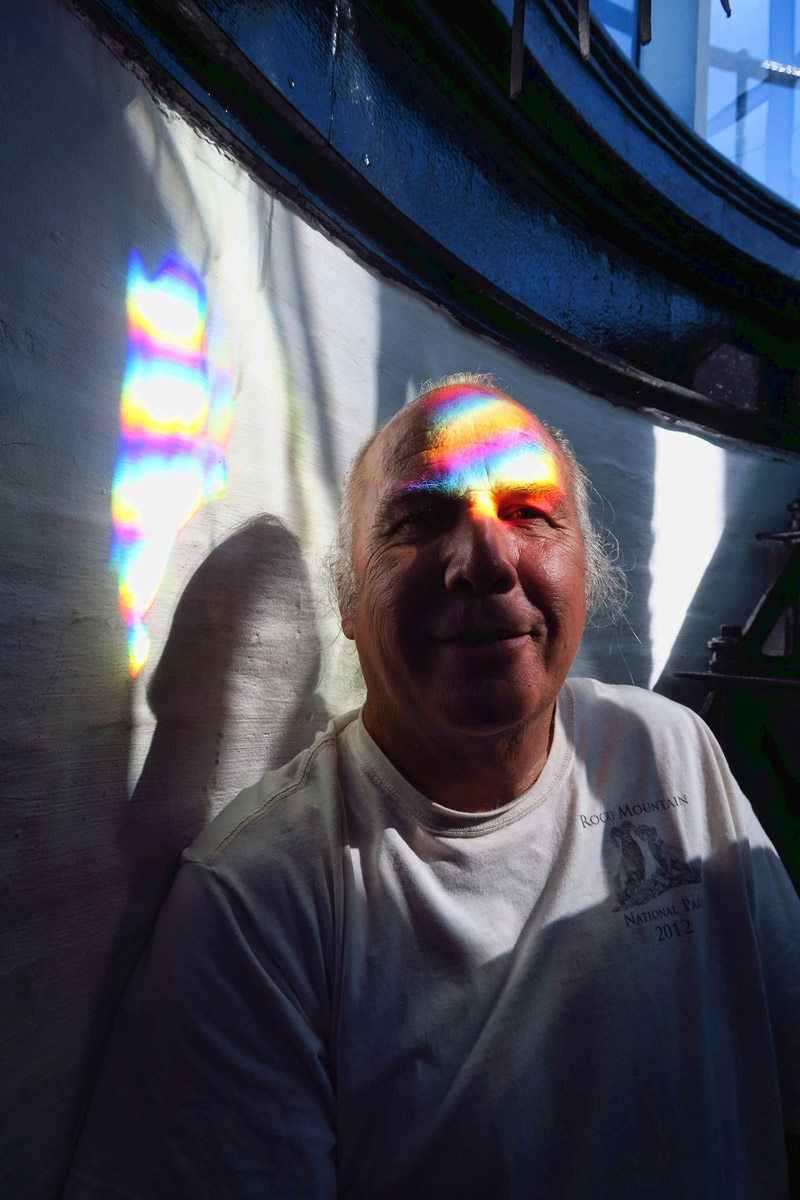 Demonstrating the wonder of the Fresnel Lens prisms.

The further up the Oregon coast one travels along Highway 101, the availability of the state parks becomes inversely proportional to the price of the independently owned RV parks. As we pass one “Campground Full” sign after another, we pull off the road so I can consult my trusty AllStays App. How convenient that it directs me back to the nearest turnoff to the Blue Heron French Cheese shop. Although they are a member of the Harvest Host program, they also allow overnights for non-HH members. This may be the most unique place I have ever dry camped. But what a great way to prepare a meal! Go into the cheese shop, pick up a wheel of peppered brie and a chunk of blue cheese, and come back out to the rig and plan a meal around it! 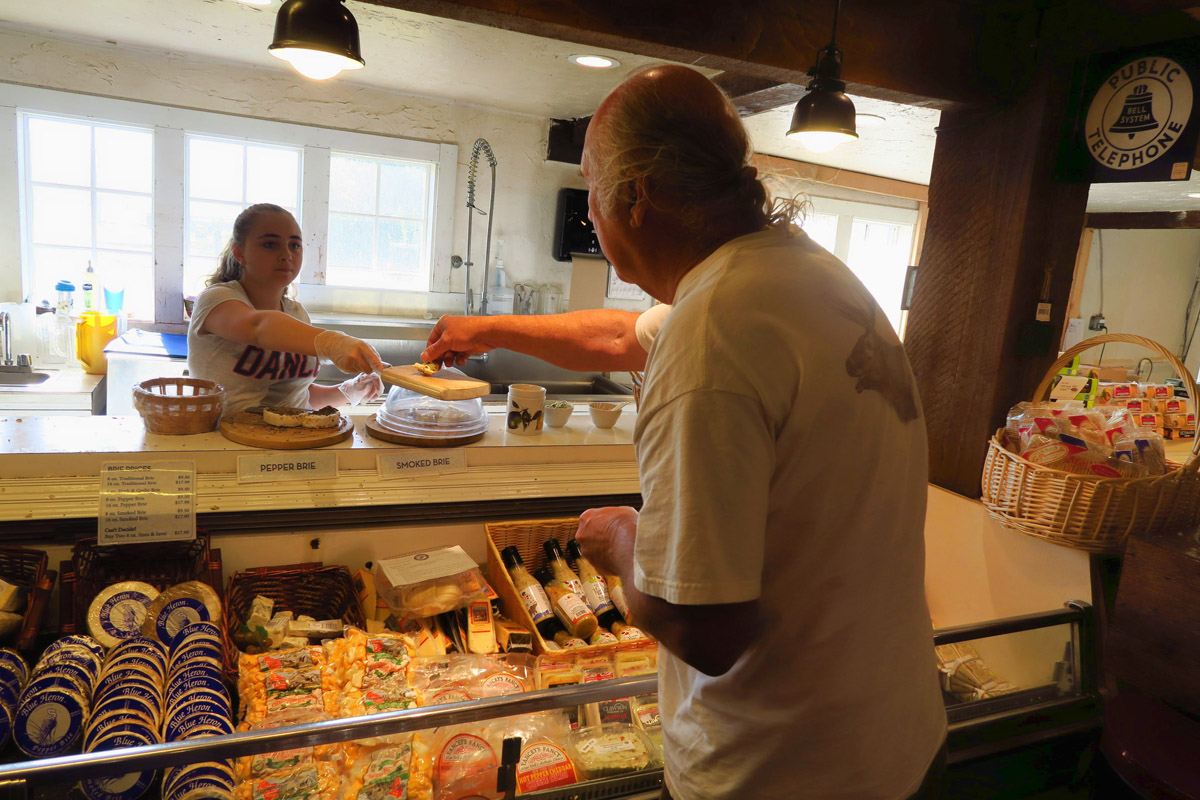 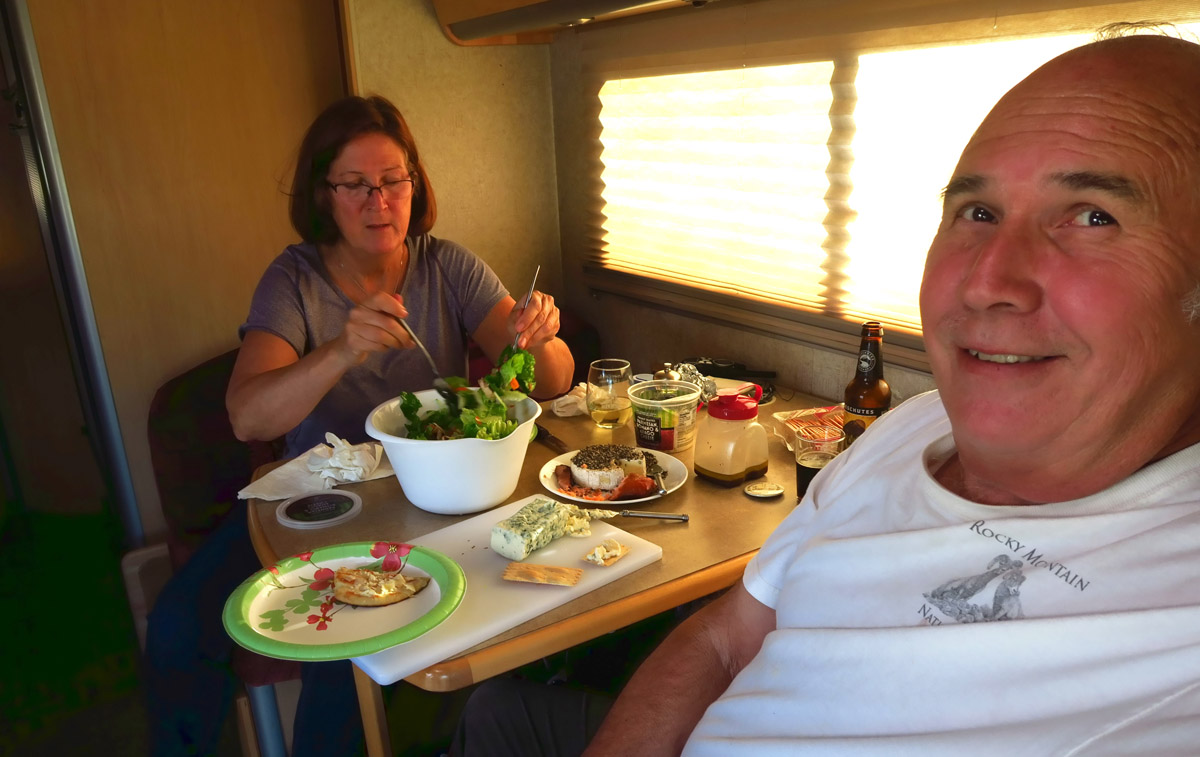 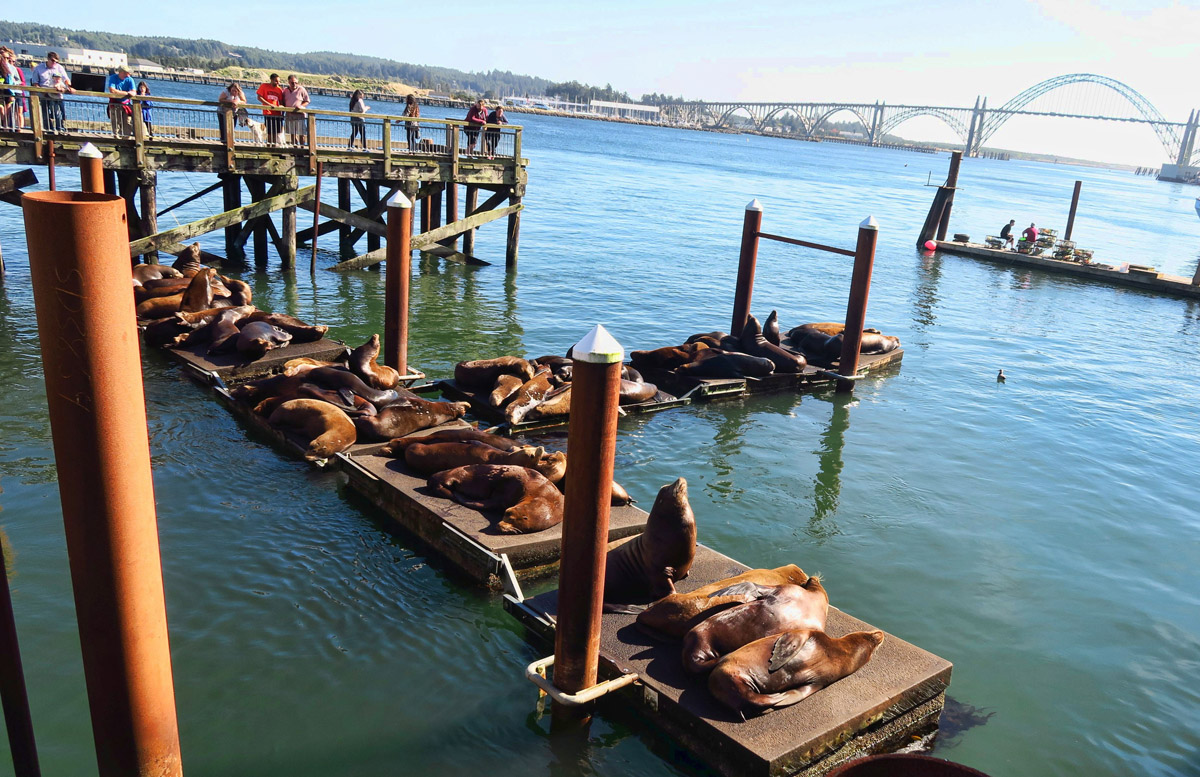 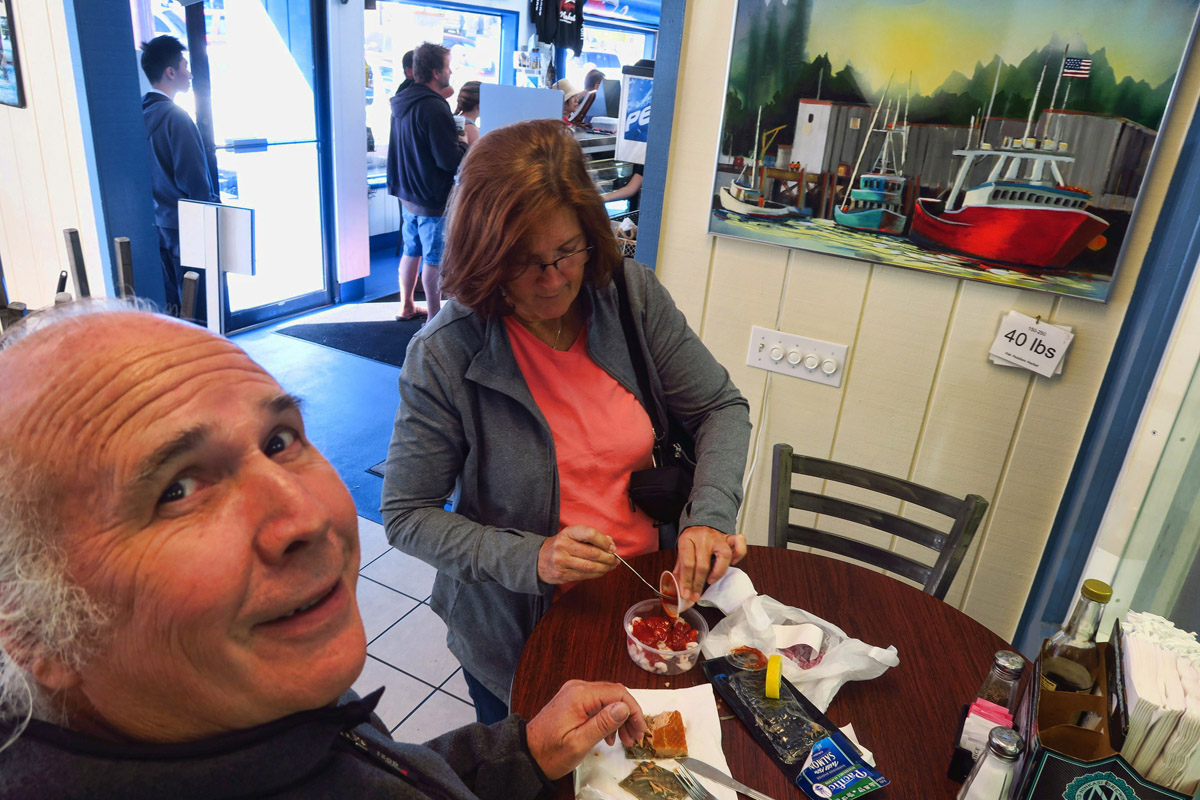 Having lunch at The Fish Peddler in Newport. We are sampling the wild bay shrimp…. 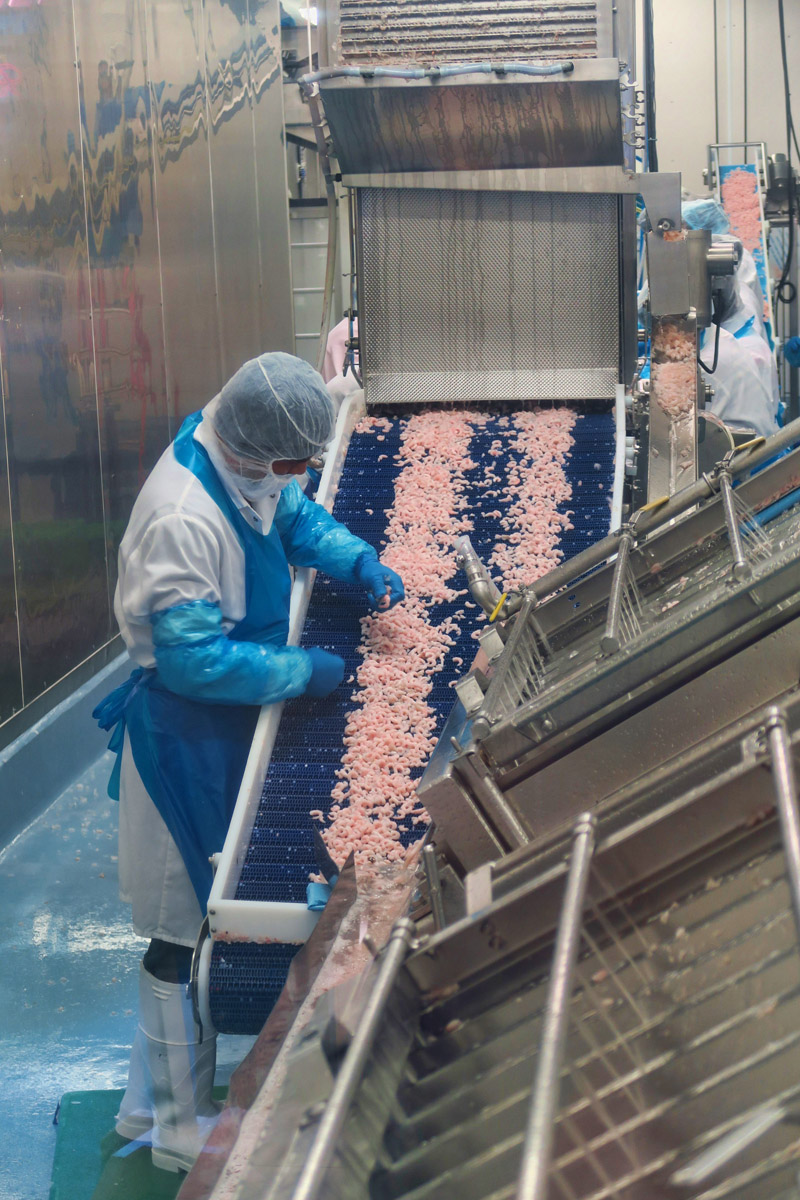 …while watching them being canned on the other side of the window by our table. 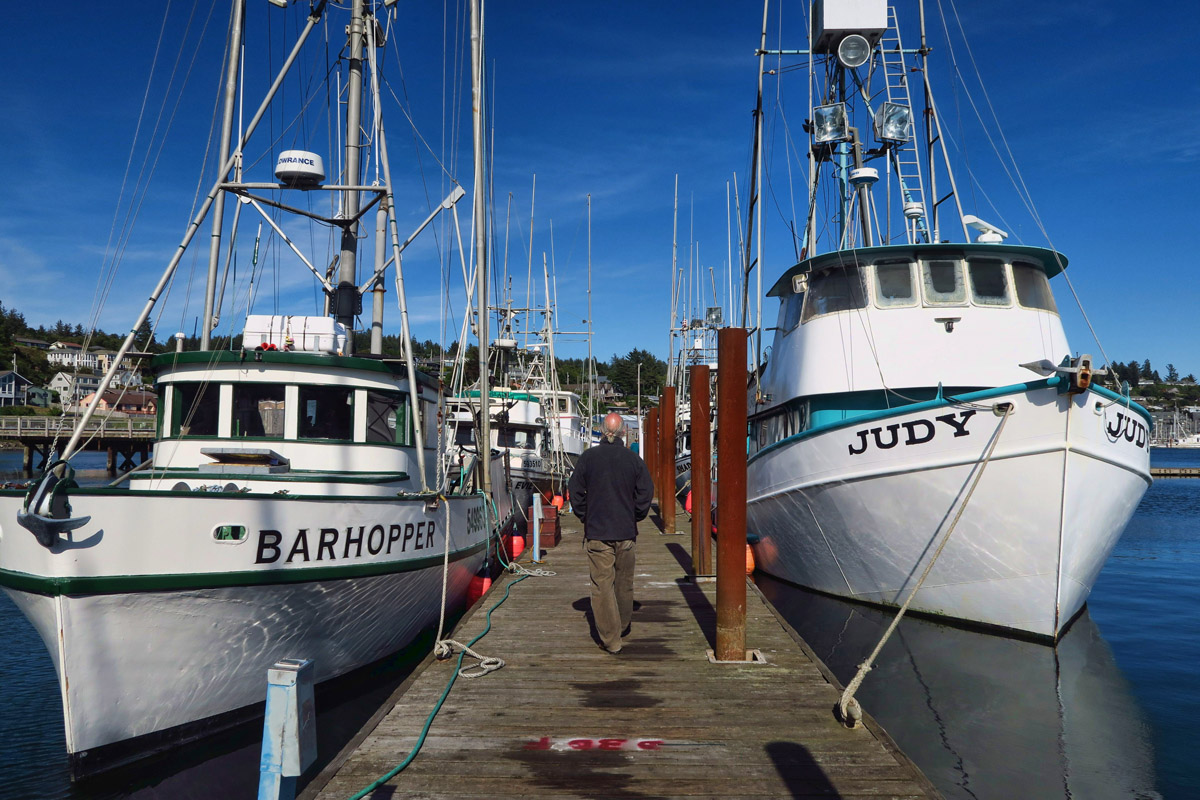 As we round the tip of the Oregon Coast pointing inward, I am holding my breath hoping for a spot to park so I can show Don around my favorite coastal town of all, Astoria. I have tried every way I know to contact the little Pier 38 RV Park where I stayed back in 2014, but local newspaper articles indicate it’s closed, if not closing soon. As I lead the way up Highway 101 rounding the corner eastbound, hoping against hope the park is open, my mantra is…”Come on, Astoria….do me a solid!”

17 thoughts on “A Few of My Favorite Things…”