In my previous post, I mentioned the grand bargain of Guadalajara, the Tapatio Tour bus that offers three routes of touring, all for the low price of 70 pesos, or $3.50.   One of these three routes travels just about seven miles away to the nearby suburb, Tlaquepaque, pronounced “Tuh-lacky-packy.”  Try saying that without laughing.   Of course, we English speakers can’t resist putting a syllable after the “T” when it should not be separated from the “L” but still you get the general idea.  The name just sounds like fun.  And I figure if Tapatio Tours offers a separate bus there, well, it must be worthy of exploring. 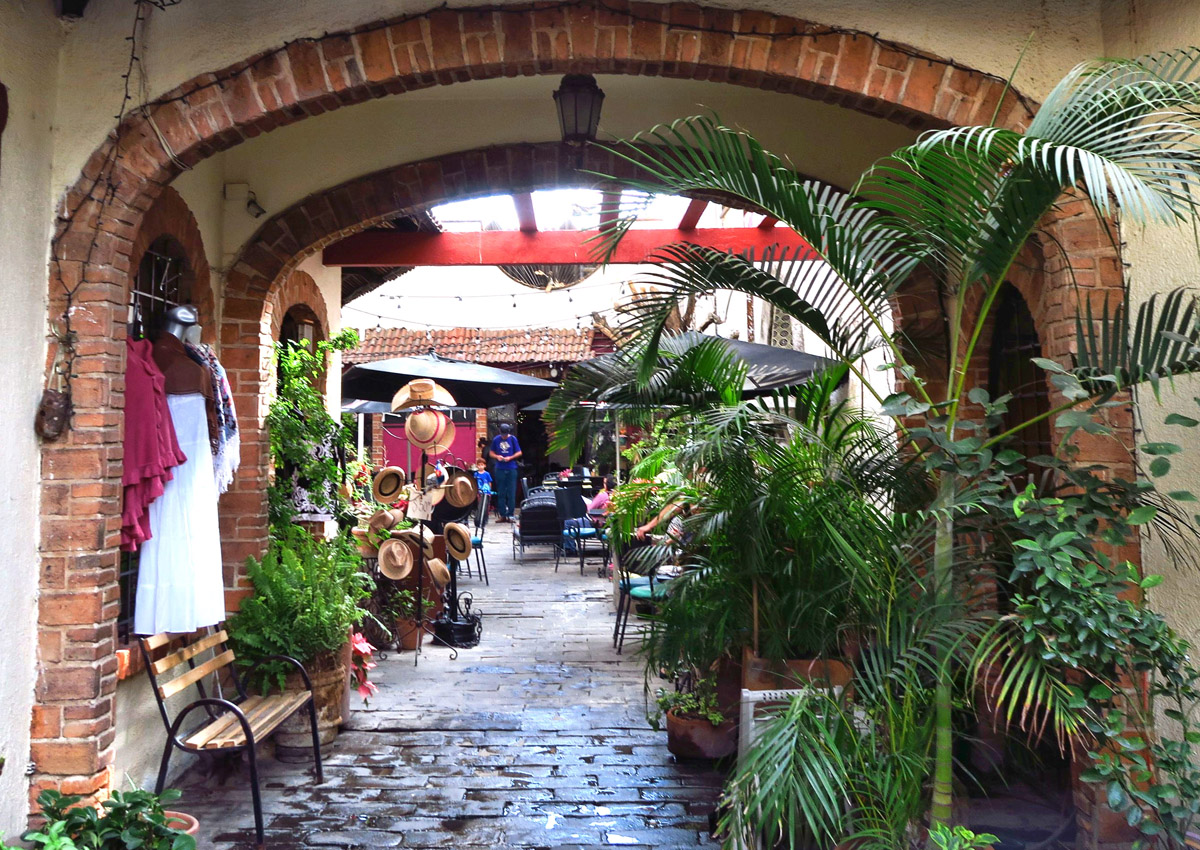 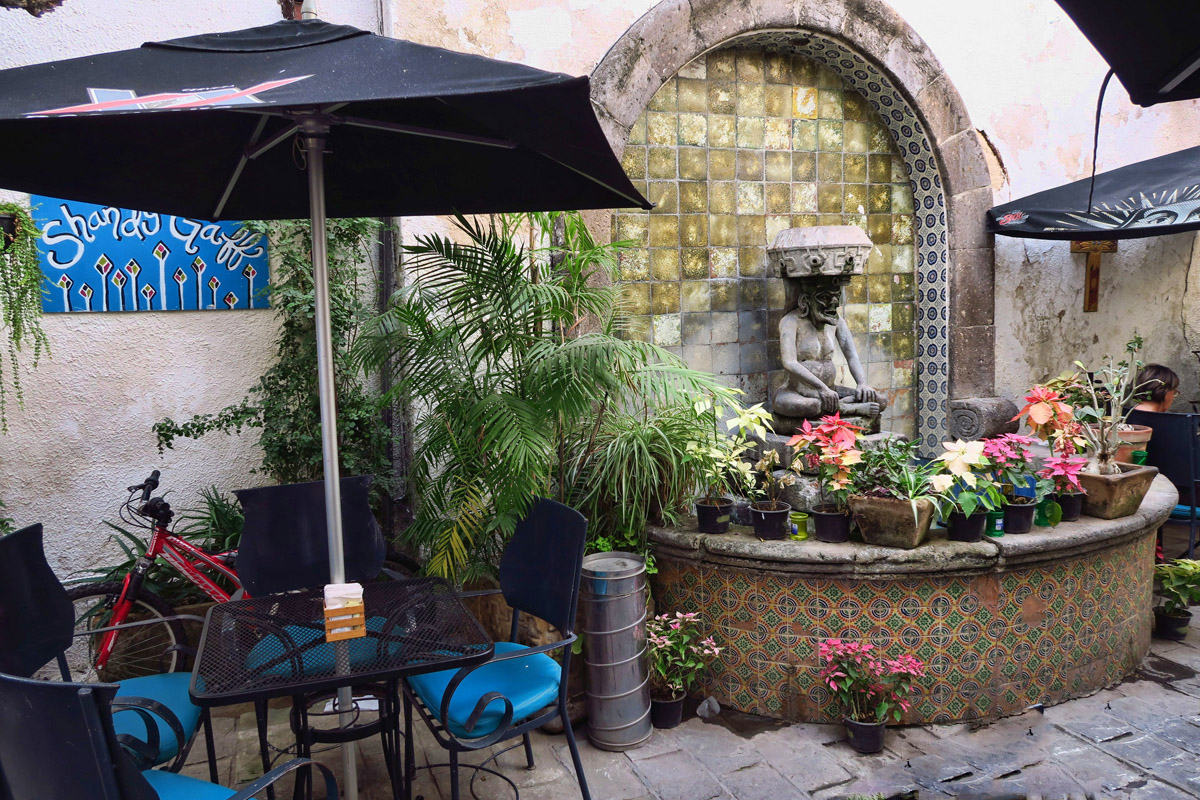 Yes, Tlaquepaque is a bit of a tourist destination, but if you enjoy arts and crafts, there’s no better place. 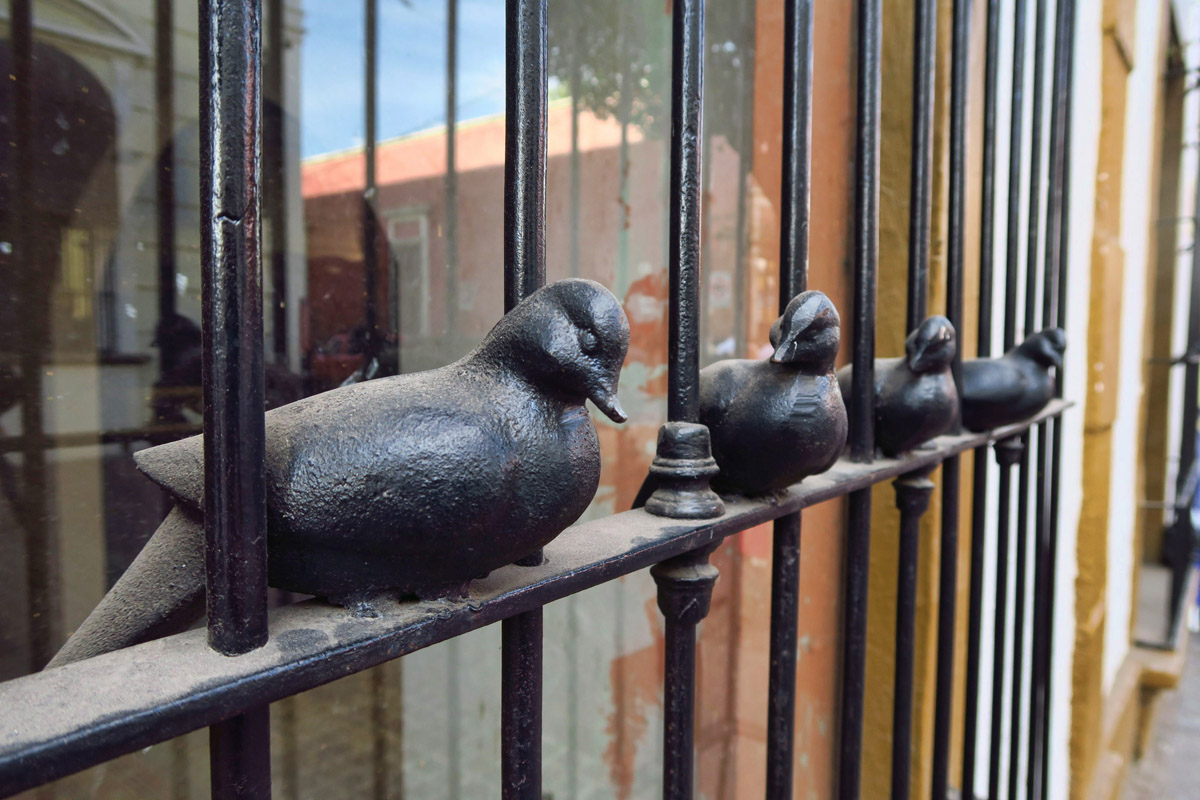 I’ve never been much of a shopper, ever since I was faced with liquidating the contents of my first home following a divorce in 1993.  My former husband wouldn’t even agree to cooperate with the realtors, much less help me pack up all the crap we accumulated after eight years of marriage.   There was no such thing as ebay or Craig’s List back in 1993, so I hauled half that junk around for years, storing the other half in a Public Storage cube for what I later tabulated to be a bill of over $10,000…my first lesson in the merits of “simplified living.” 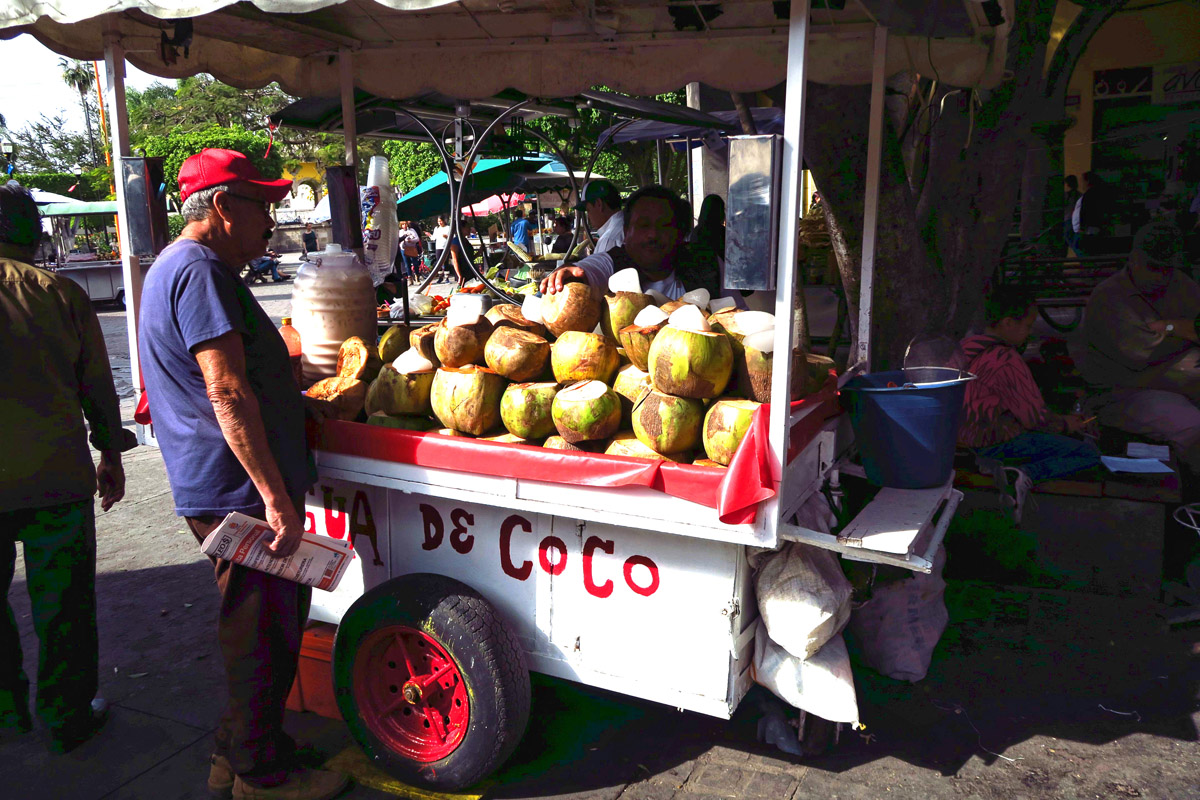 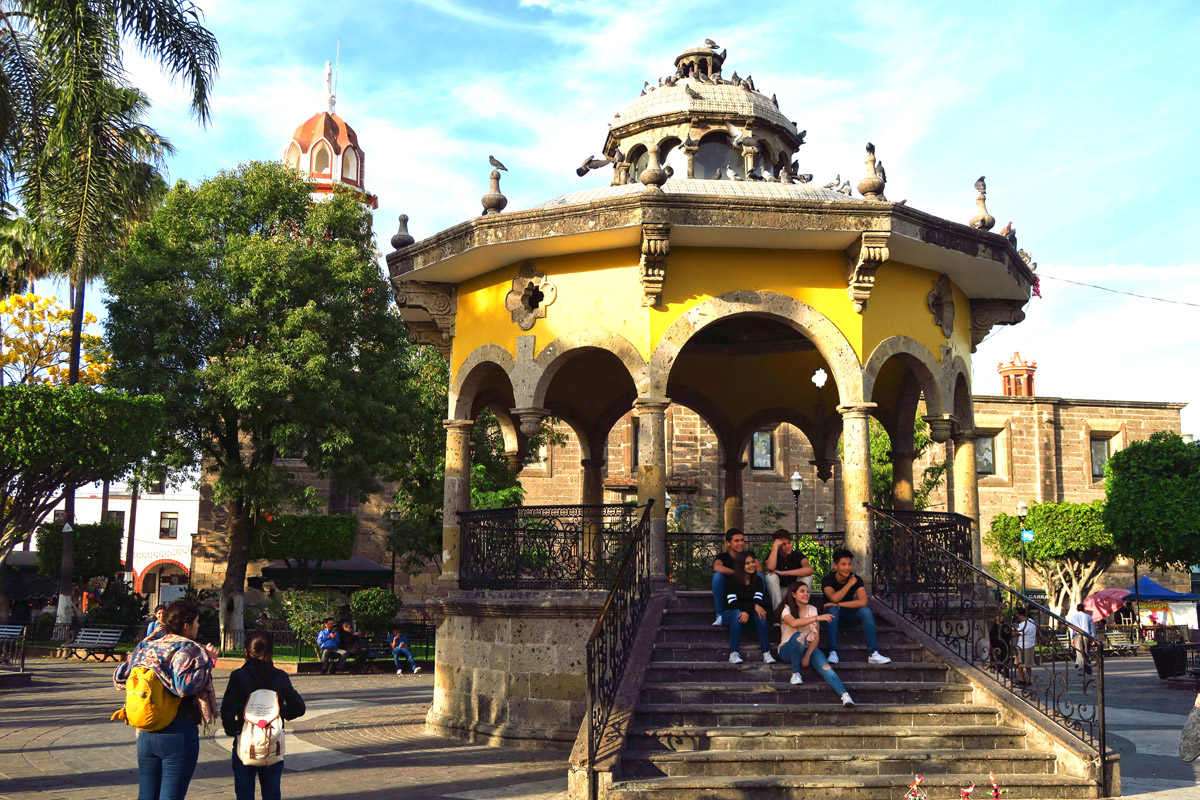 Moving to Manhattan only reinforced this need to maintain a small footprint.   There’s nothing like living in a tiny Manhattan mouse house to limit expenditures.  And what great training for RV living!   I did own a 3 bedroom home in between, but still managed to keep it pretty lean.  Still, liquidation was a painful process, not only physically but emotionally as well.  Letting go of “things” I had hauled around all those years was like saying goodbye to a lot of old friends.  Books were the toughest, as was the collection of five sets of tableware I had amassed (Is there such a thing as an introvert who enjoys entertaining?) 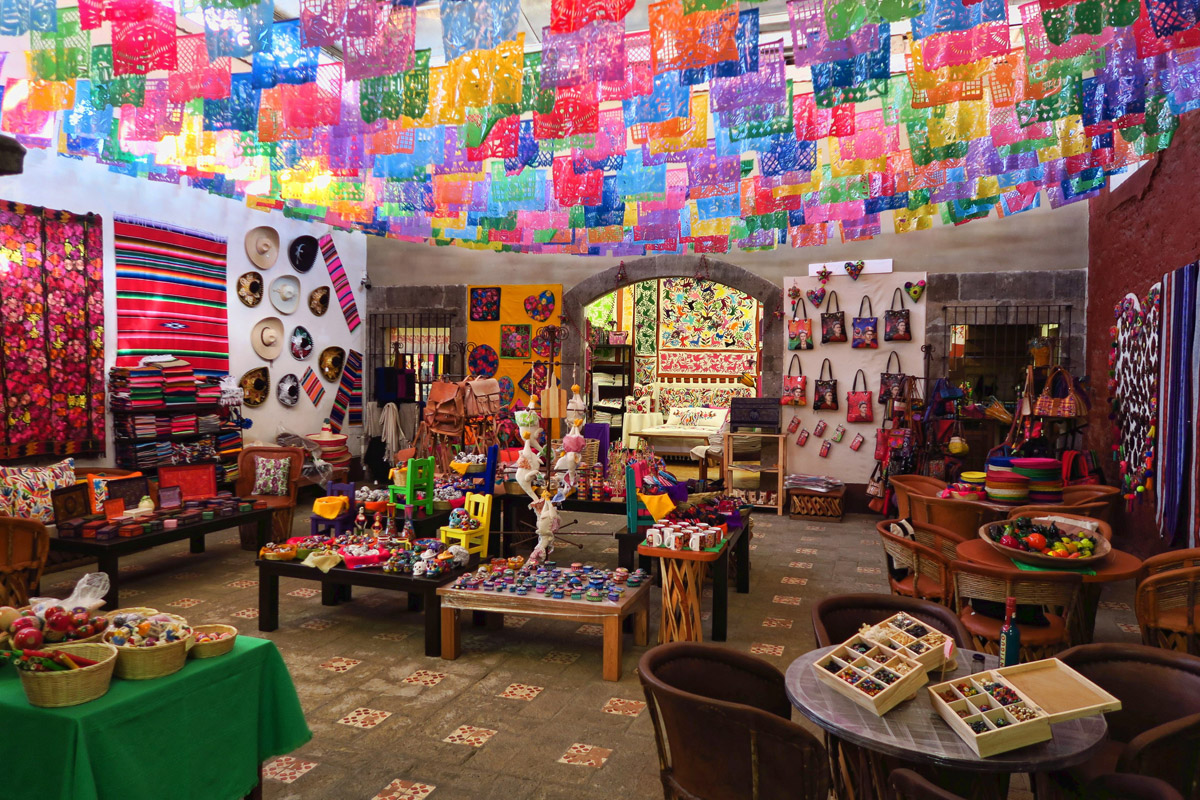 The shops along Calle Independencia are beautiful decorated. Some don’t even allow photos, because they look more like a museum. 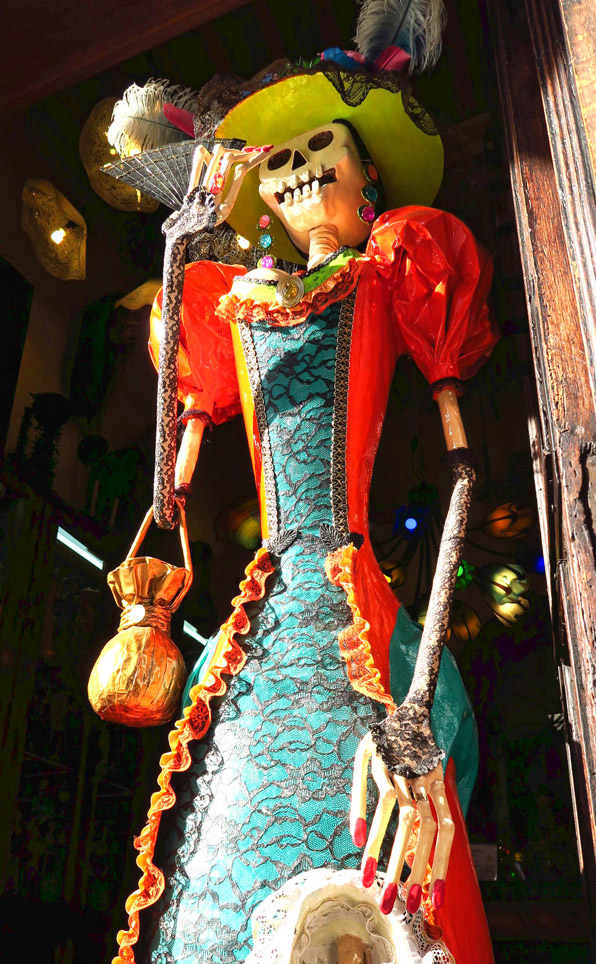 A “Katrina,” or finely dressed skeleton, which is a common theme in Mexico, celebrating the Day of the Dead.

So when a travel destination’s main draw is “shopping,” I will almost always take a pass.  The Winnie has just enough empty space to keep me from feeling smothered, and I plan to keep it that way.   So why spend an entire afternoon traveling to an “arts and crafts village,” a place known for its shopping? 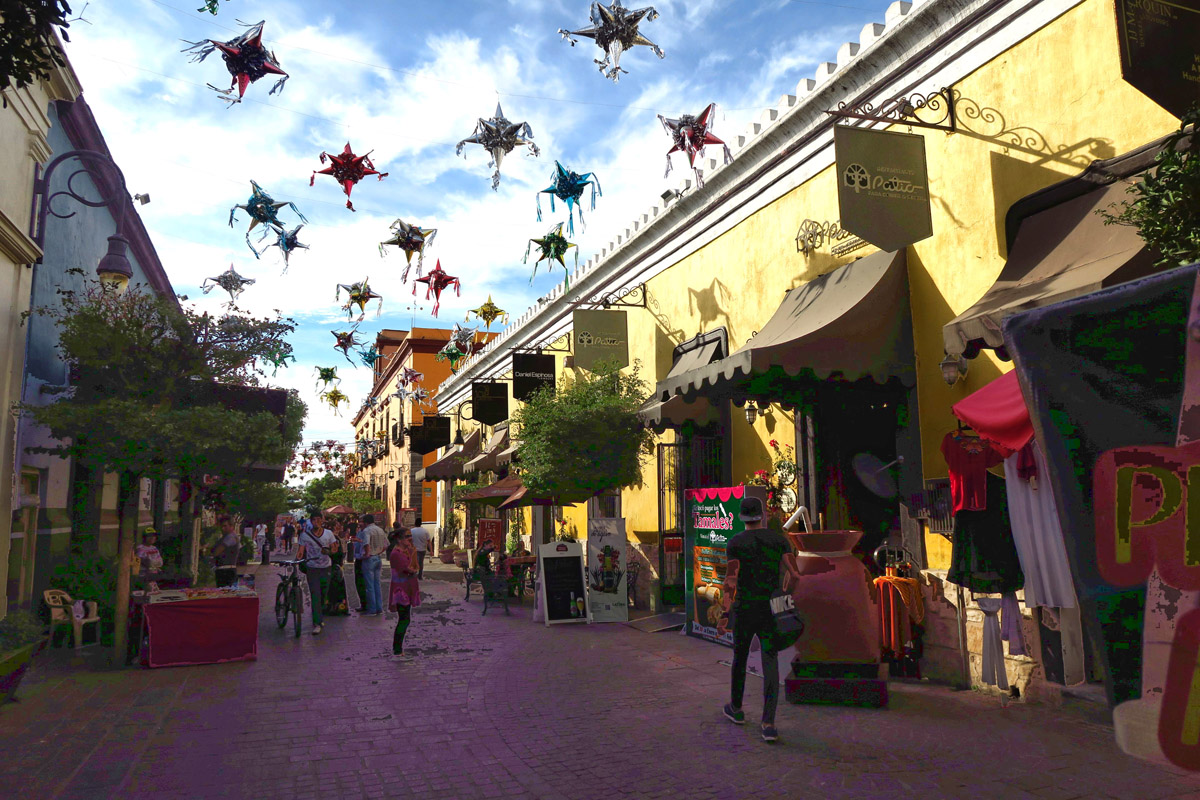 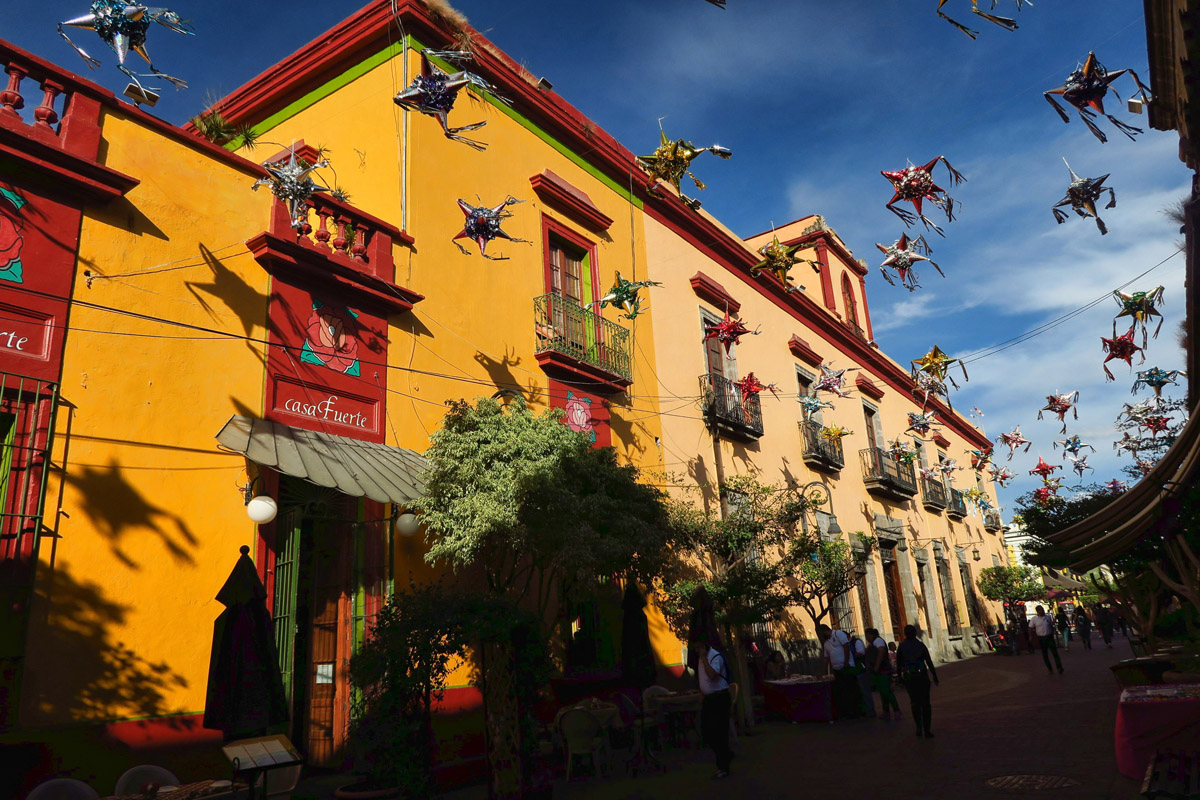 Casa Fuerte, one of the more well known restaurants along this street. 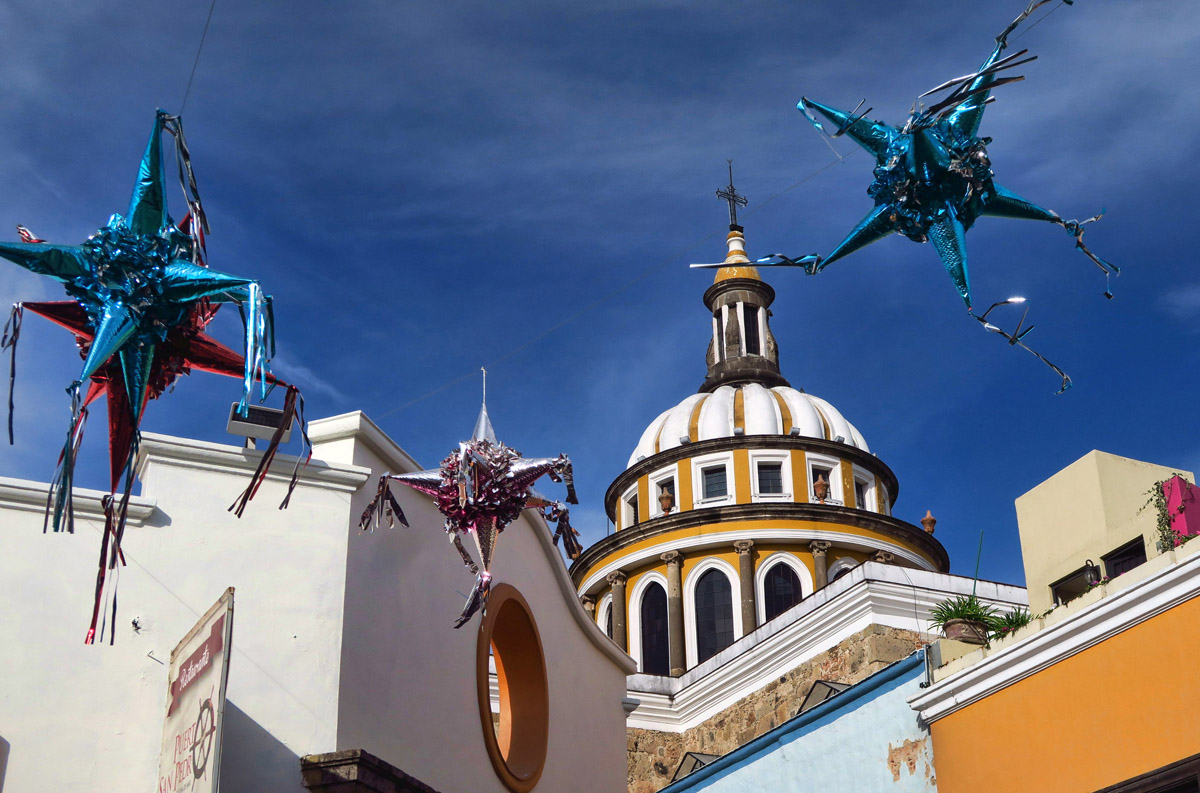 One of my main mantras when getting rid of everything to become a full timer was “I don’t have to own it to admire it.”    I kept the photos used for the sale of my prized possessions on ebay.  I’ll always have the image, if not the item.   That has freed me up to admire artistic beauty without feeling the need to own it.  And Tlaquepaque is filled with artistic beauty! 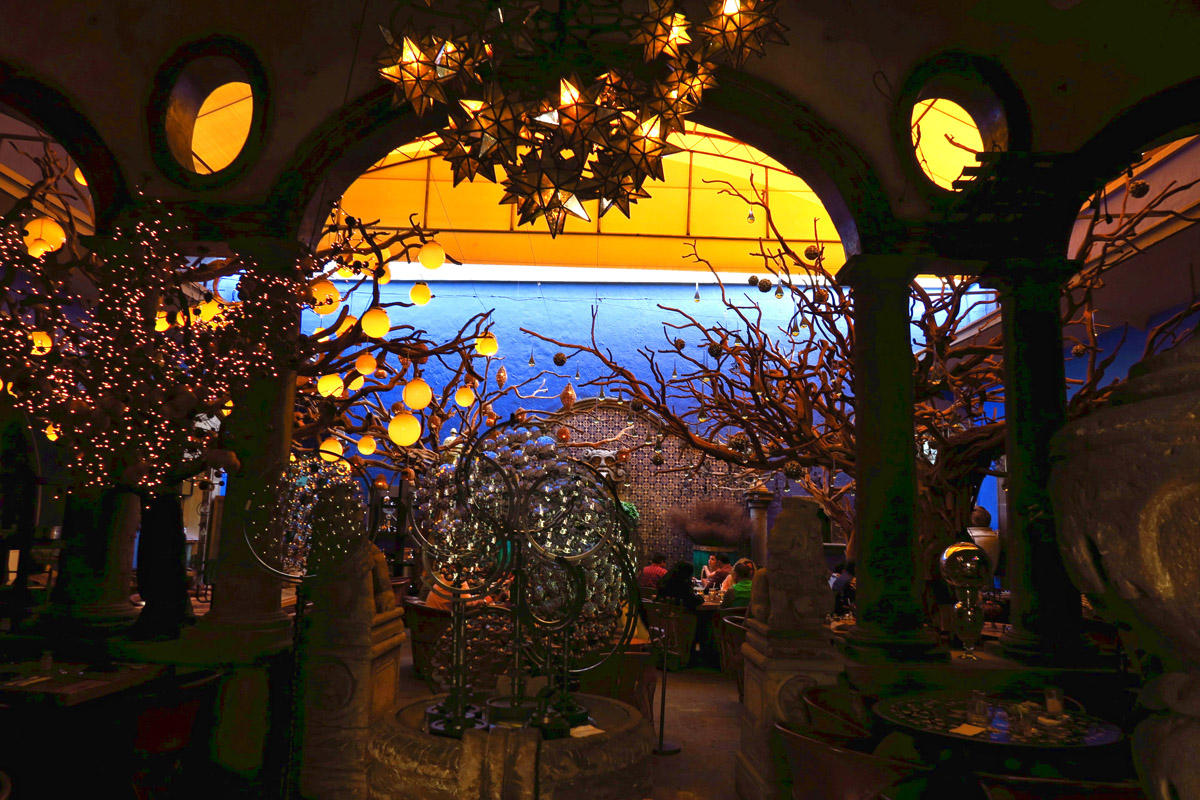 The decor inside some of the restaurants along Independencia is stunning. This one is “Casa Luna,” with lots of “moons” hanging about. 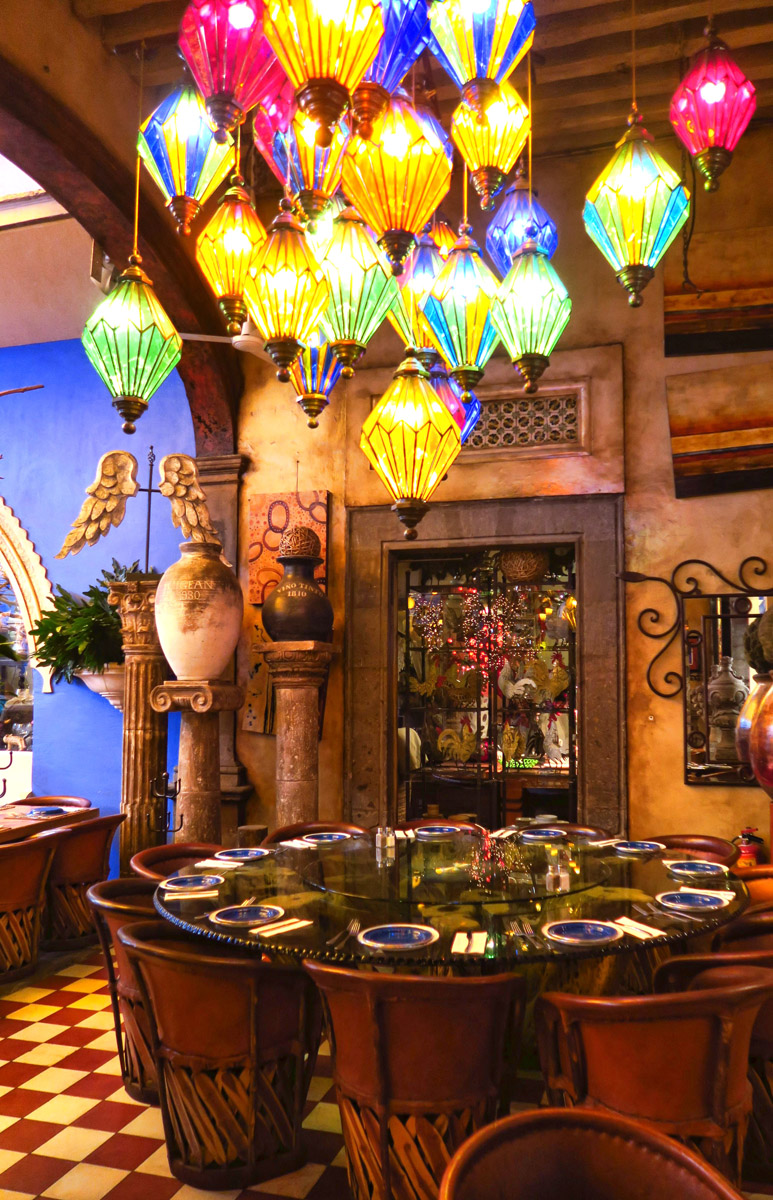 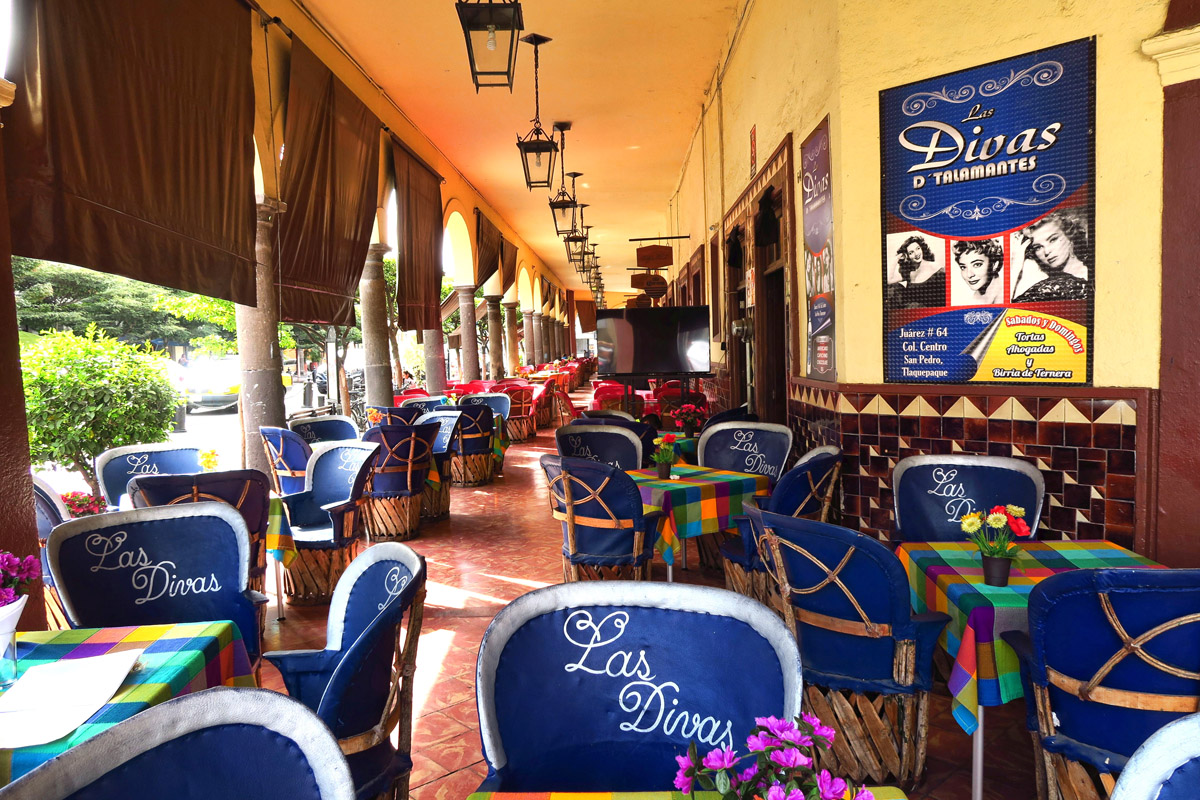 Inside El Parián, where restaurants are arranged in a circle around a gazebo in a courtyard with strolling musicians. 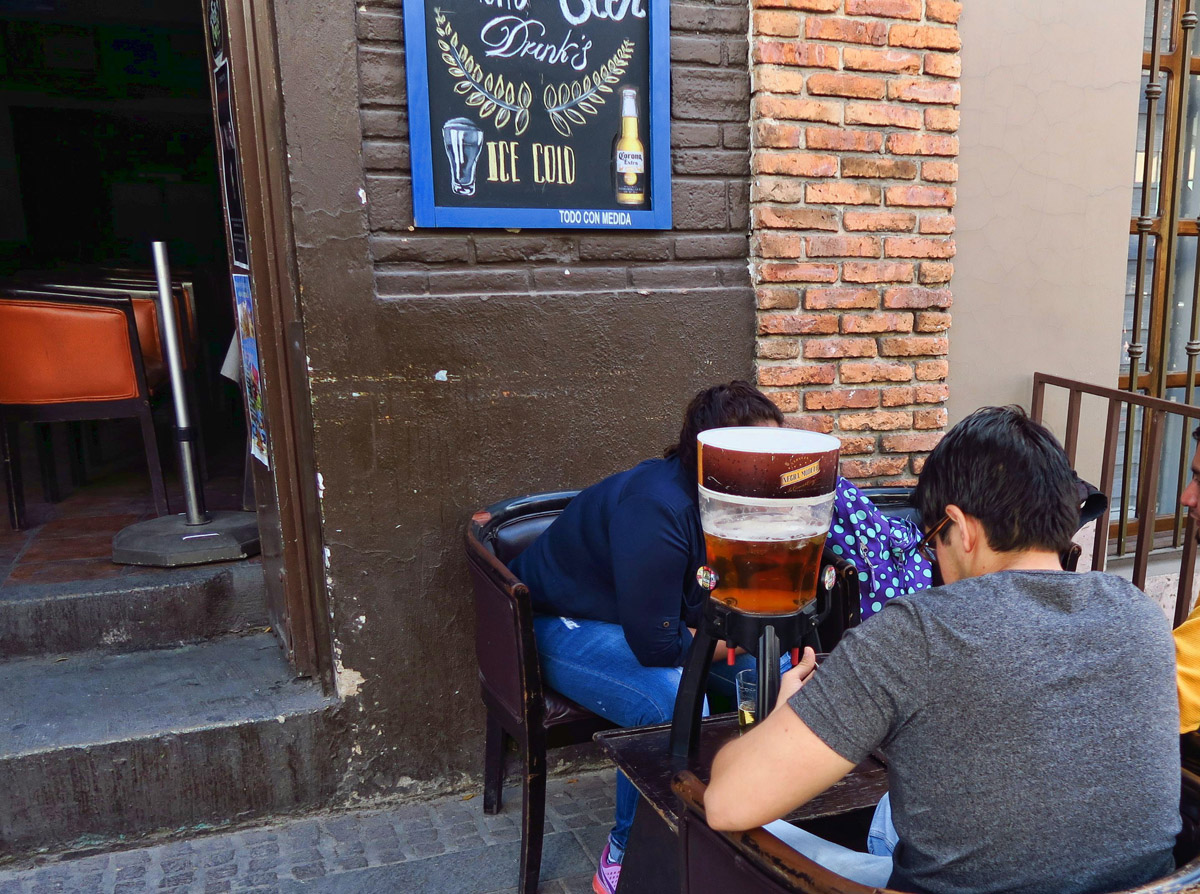 This “mini-keg” is Mexico’s version of a pitcher of beer.

The main hub of activity radiates from El Parián, a shopping arcade filled with bars and restaurants, and a fleet of roving mariachi bands.   My resistance falters, however as I walk through this open air hub, passing tables with patrons sipping salted rims of slushy margaritas in decorative glasses in keeping with the festive décor. 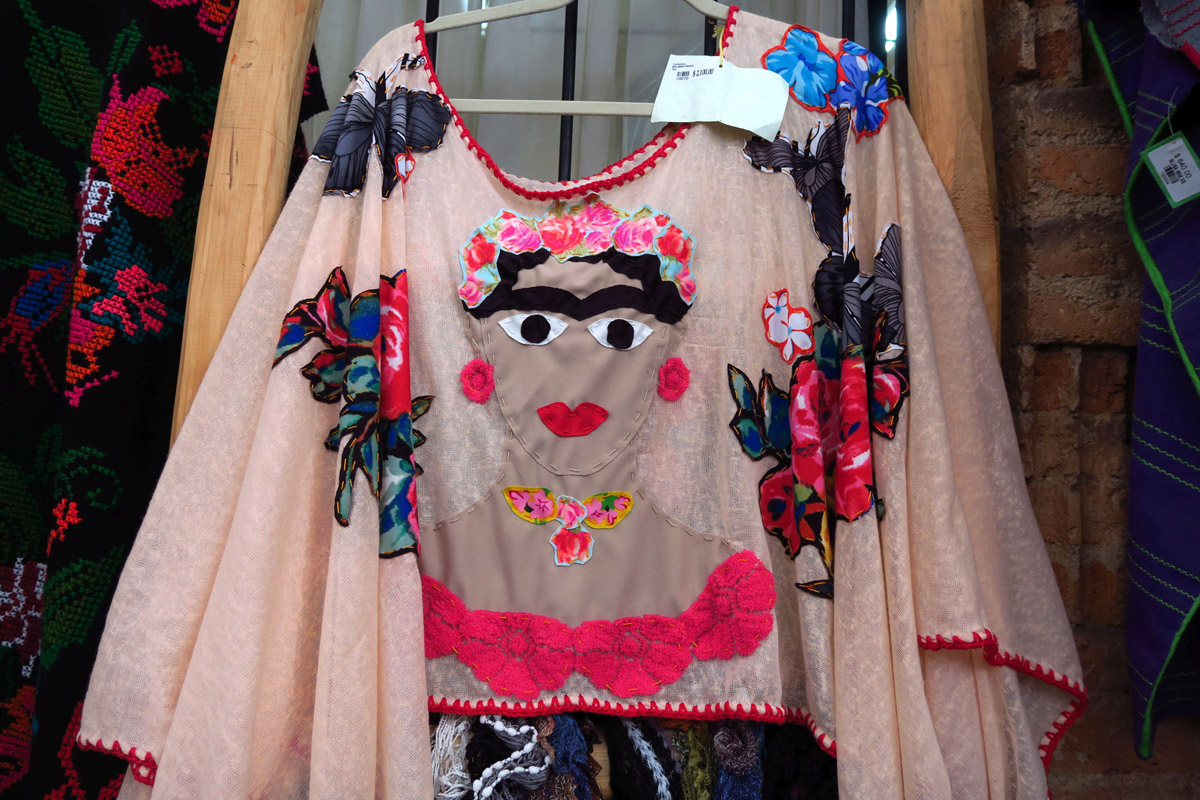 Popular items always include the ubiquitous “unibrow” of Frida Kahlo. 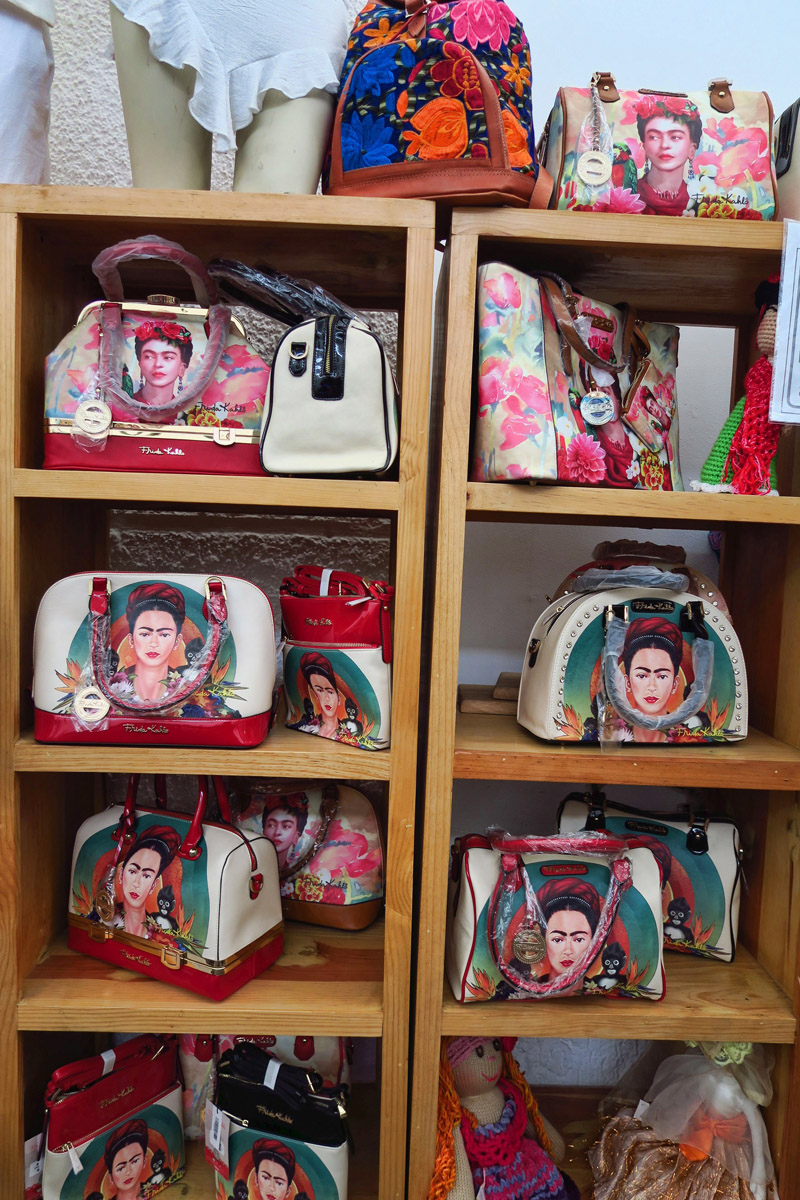 An entire wall of “Frida Bags.”

Next to this hub is the main jardin and gazebo, with torta ahogadas food carts and Neverias, or ice cream shops around the perimeter.   Two beautiful churches also help frame the square. 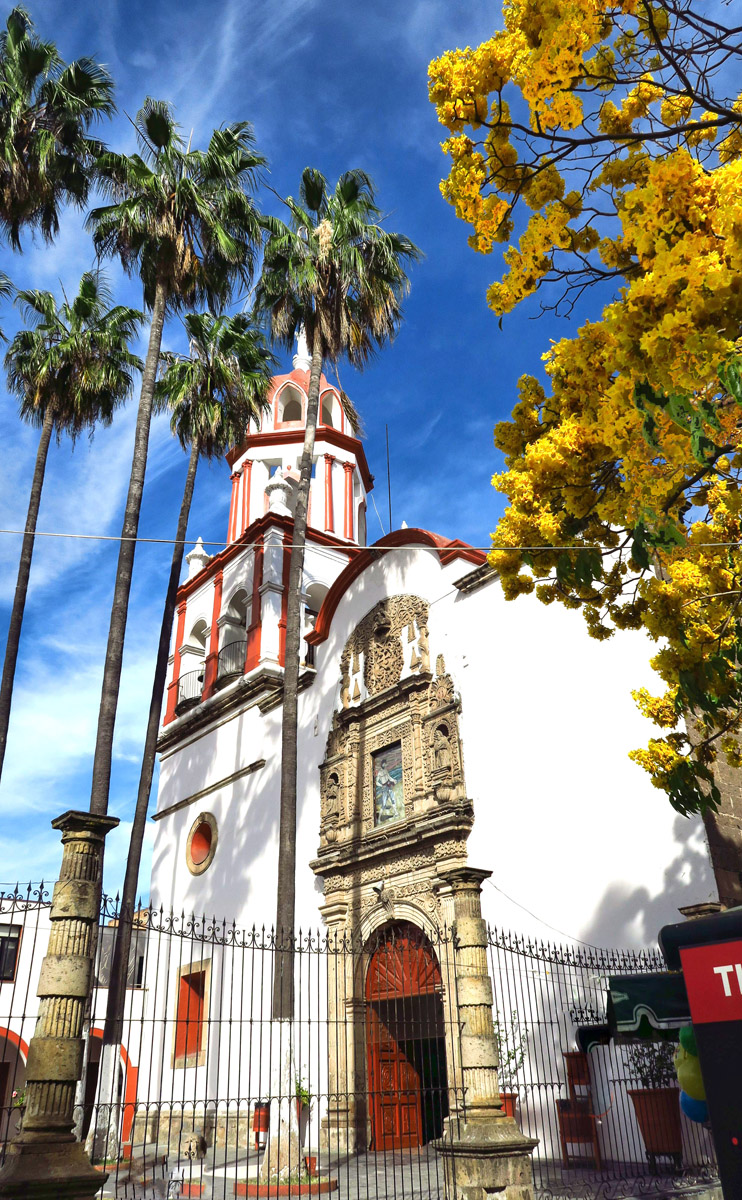 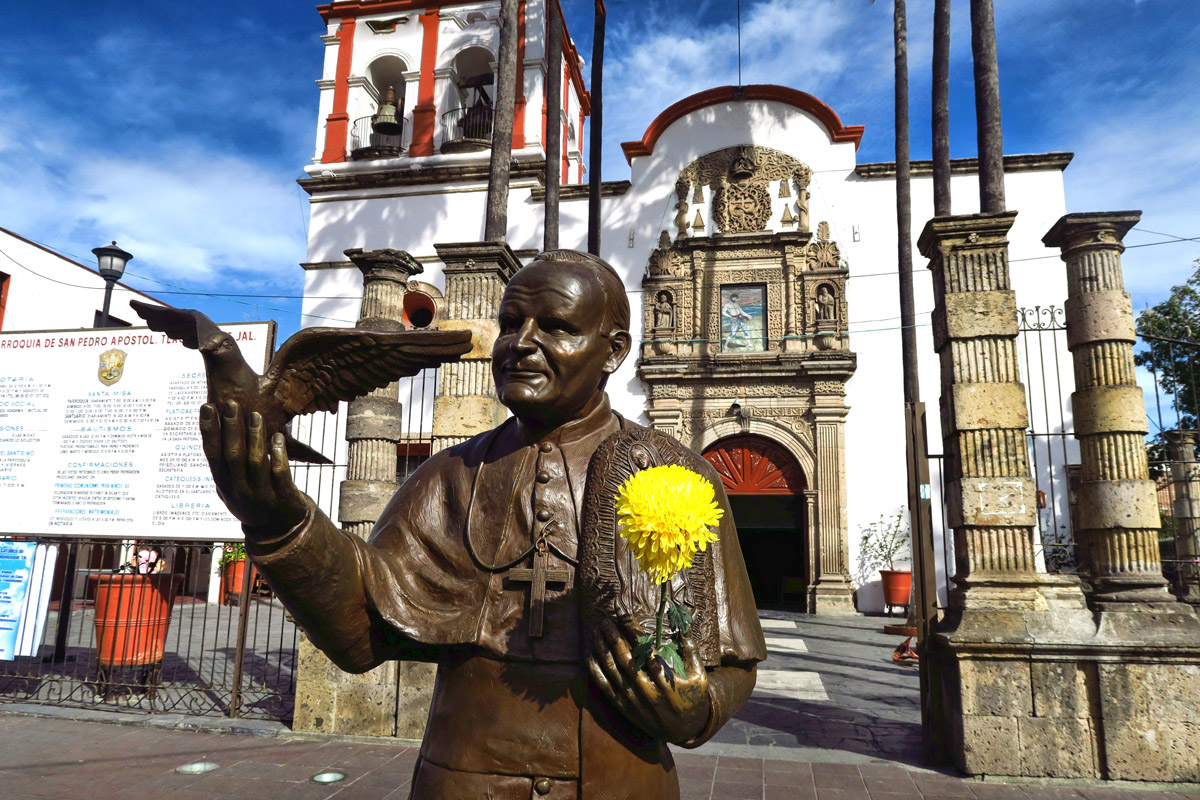 Patron Saint of the village.

But the biggest tourist draw is the pedestrian-only Calle Independencia, radiating off the main square. This is a row of steadily repeating doors and windows filled with beautiful displays of house wares, antiques, pottery and pewter, and themed shops so close to museum quality that some even forbid photos. 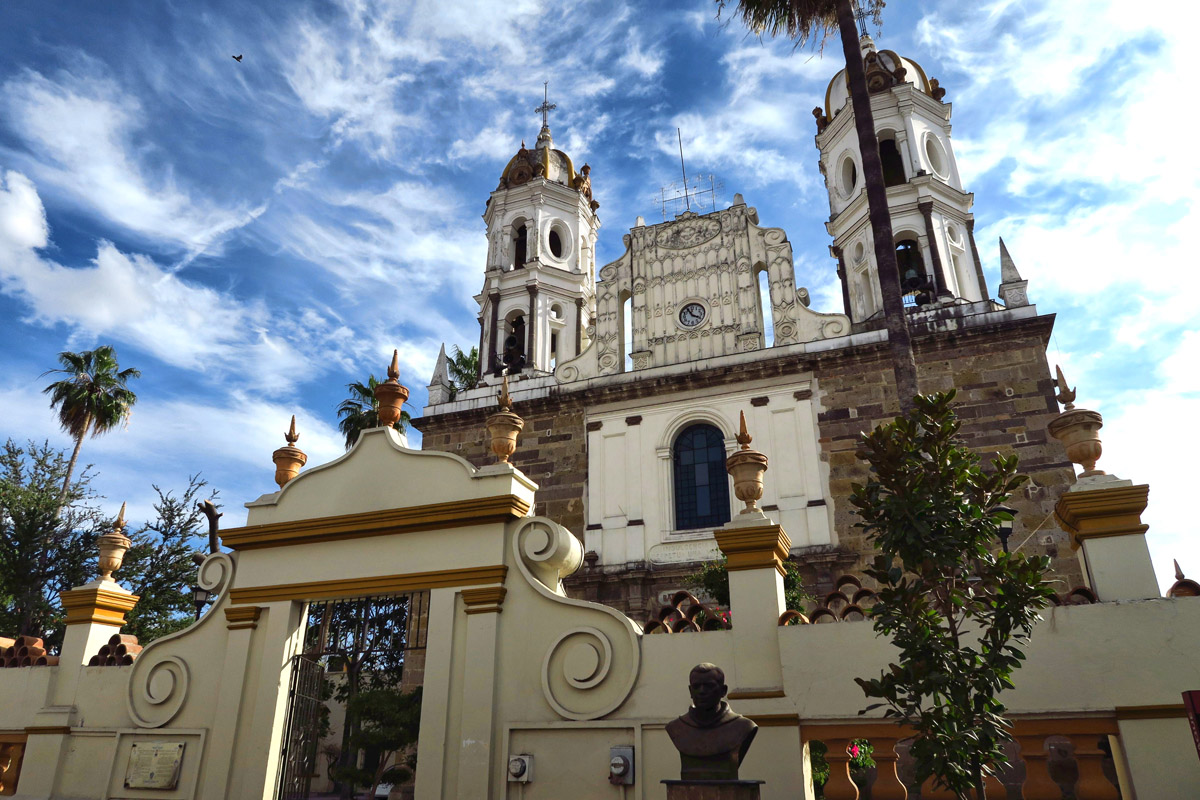 The construction of Santuario de Nuestra Señora de la Soledad on the west side of Jardín Hidalgo began in 1742 and was completed in 1812. 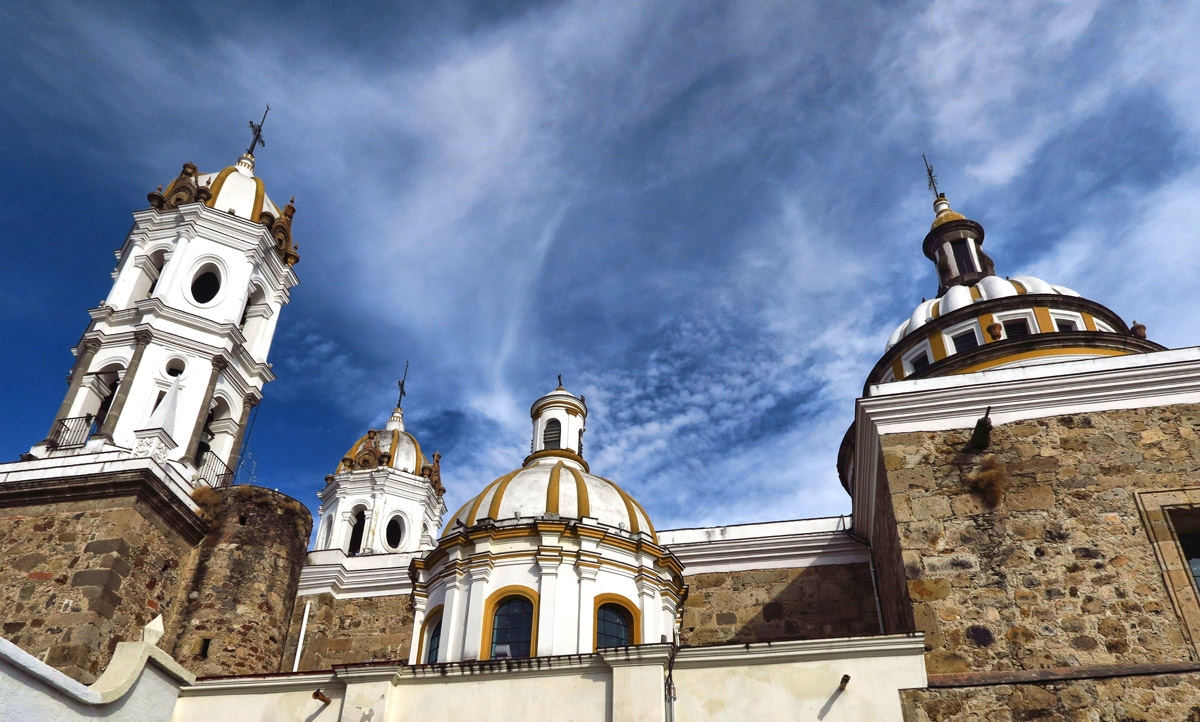 Of course, one needs not walk too far for a rest stop in the many equally decorated restaurants.  On the second to last Friday of each month, an event called “Noches de Ronda” takes place whereby mariachis and street bands are featured. 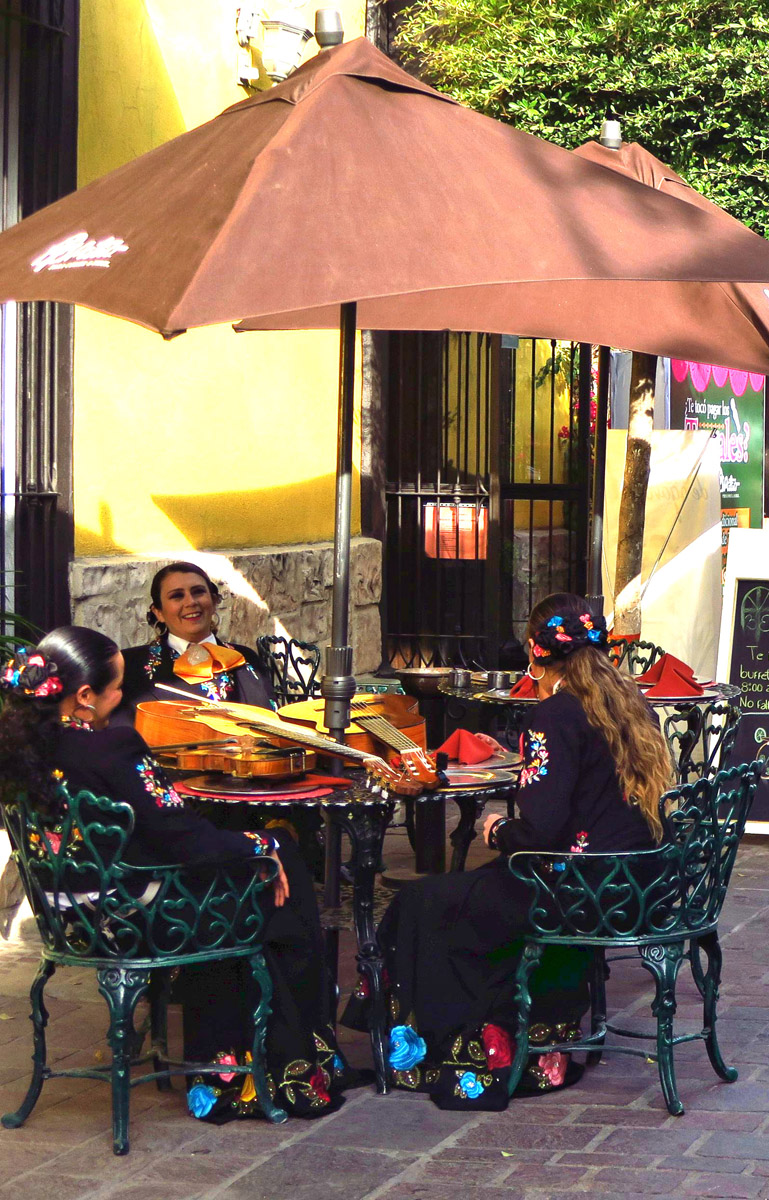 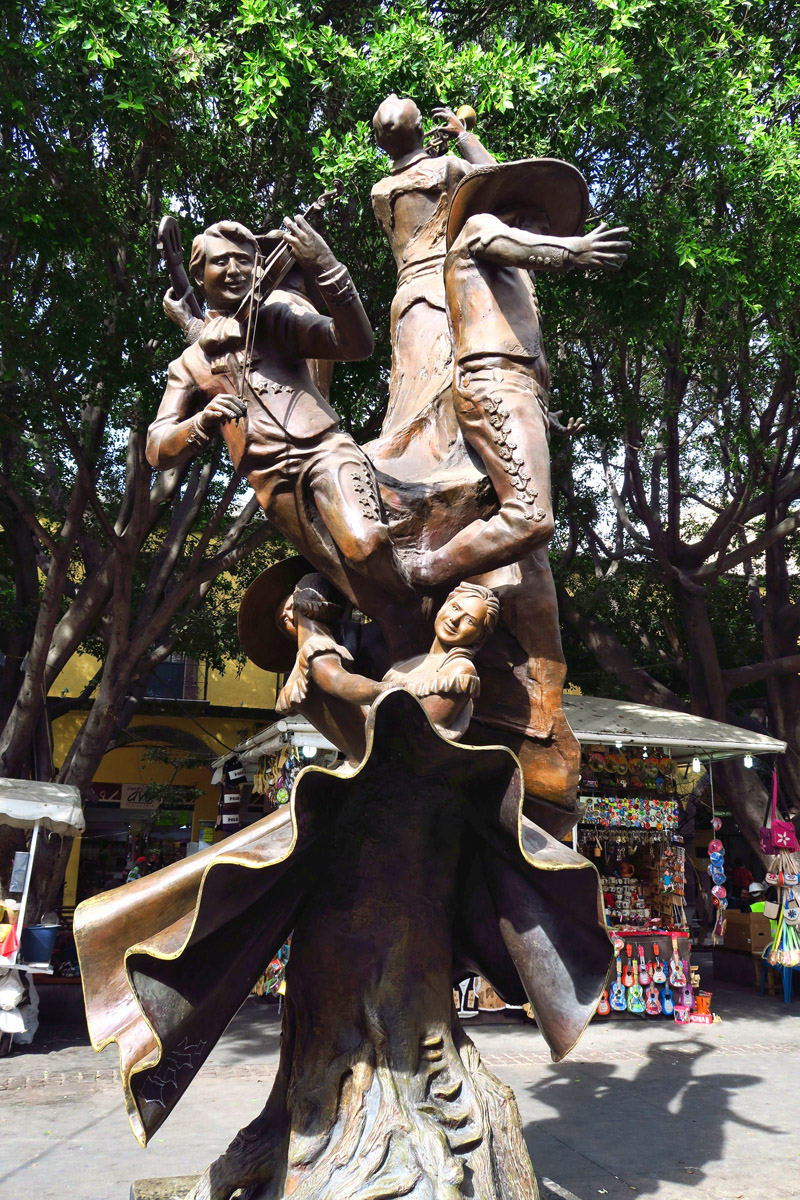 I’m proud to say I admired, sampled, touched, smelled, and tasted offerings up and down Calle Independencia…but I came back on the Tapatio Tour bus with my sights enriched, my tactile senses stimulated, my thirst quenched, and my wallet still intact.

13 thoughts on “Tlaquepaque: As Fun to Say as it is to Explore”