On my last visit to Mazatlan in 2013, there was one thing I wanted to do, but due to a commitment to meet Don in Oaxaca for New Years, there wasn’t time.    I wanted to climb “El Faro.”   And if you haven’t figured out by now, El Faro stands for
:::(drumroll):::   “The Lighthouse!”

I knew very little about Mazatlan’s lighthouse….only that it was atop a very large hill at the end of the shipping channel, and was reported to offer spectacular views.   So given that it’s a lighthouse, and I am a self-proclaimed “lighthouse nut,” it was a must-do this visit. 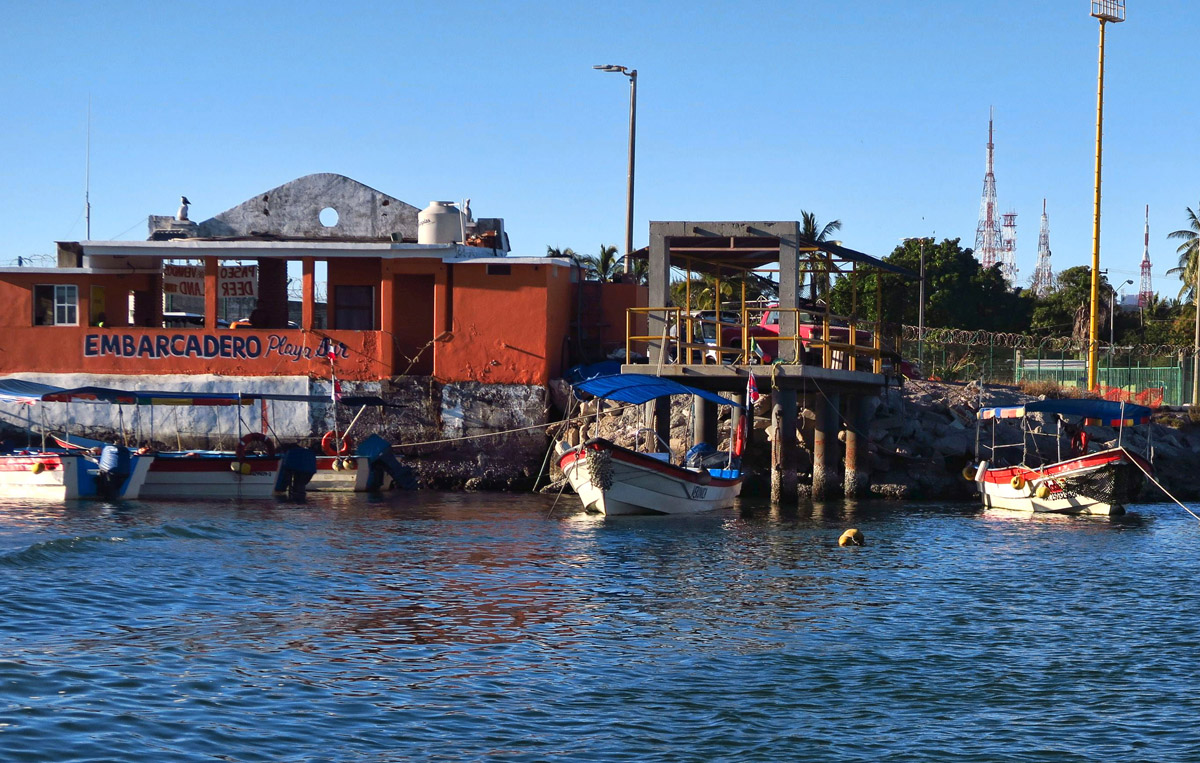 El Faro is just a short panga ride away from my studio rental on the Isla de la Piedra. 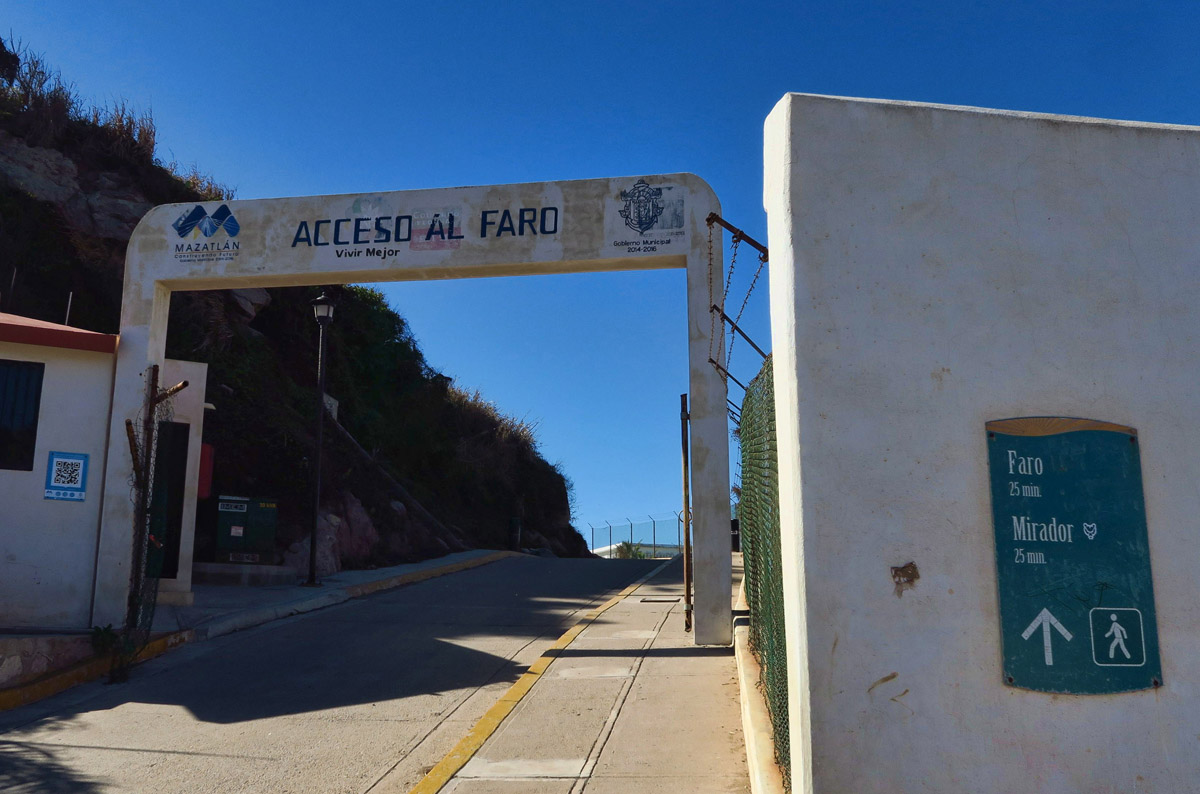 Entrance to the path leading to the El Faro, or lighthouse is adjacent to the sewage treatment plant. 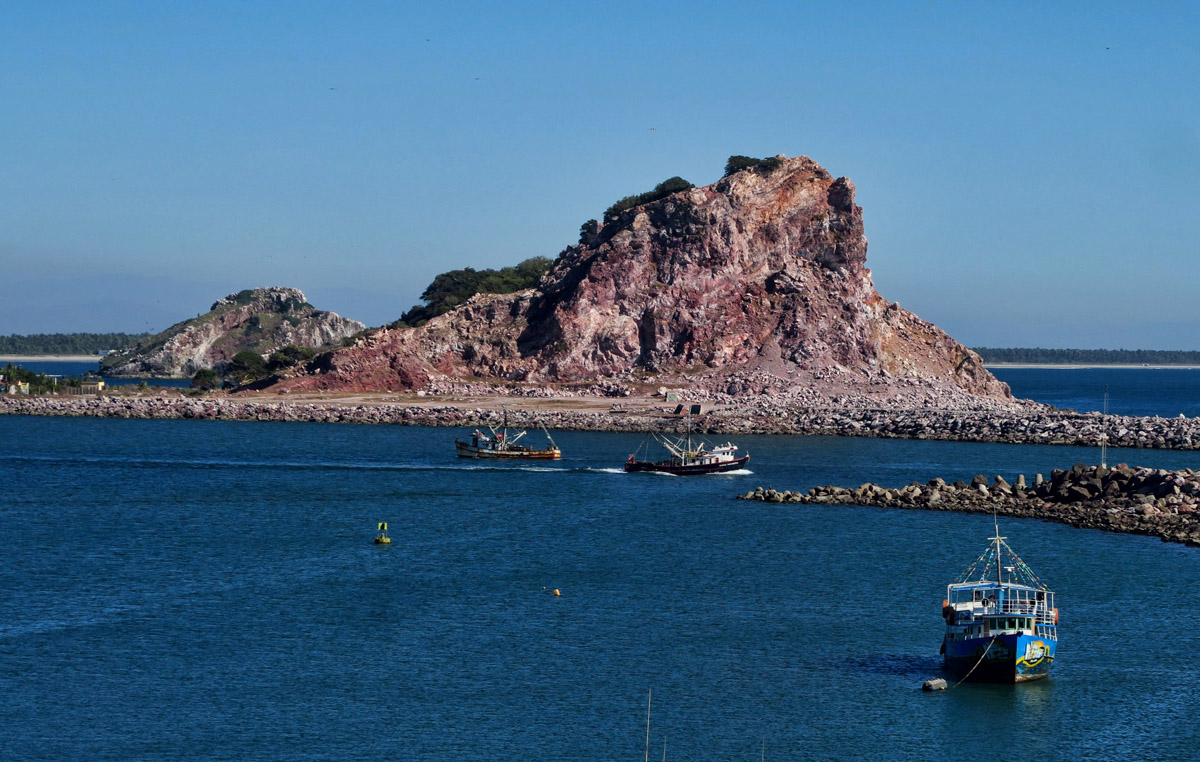 El Faro is reported to be the highest (not the tallest, but the highest) lighthouse in North America, second only to Spain’s Gibraltar for the “highest in the world” claim.  It sits atop Cerro del Creston, a 500 foot hill that was once an island, now joined to the mainland by a pier.

There’s a trail to the top which includes switchbacks for the first half, then 334 stairs to reach the top.  At times, this path is even lighted, though illumination via the overhead glass globes comes and goes with waves of vandalism.    Only the very top is fenced, so the path up the hill serves as everything from a lover’s perch for watching the sunset to Mazatlan’s most strenuous workout.  There’s a billboard at the top rating fitness levels according to the time it takes to climb to the top. 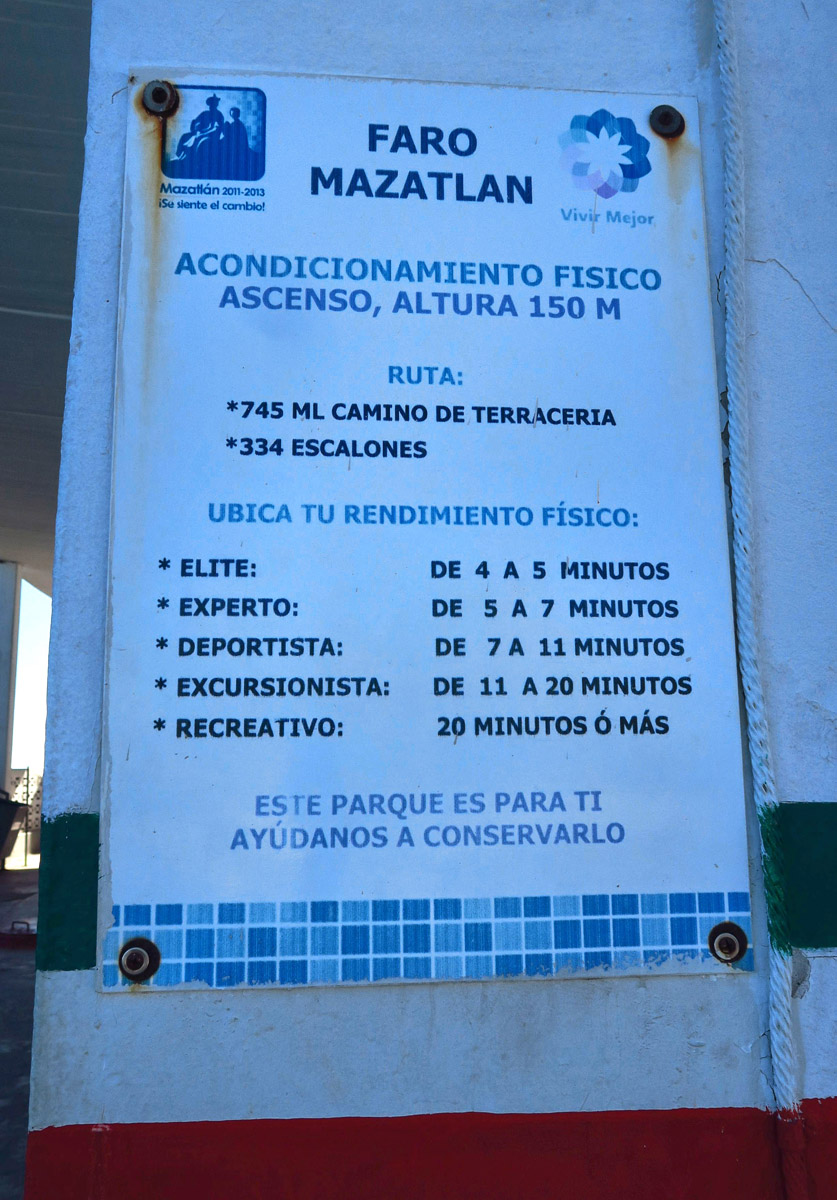 I confess to being at the “Recreativo” level on the way up. 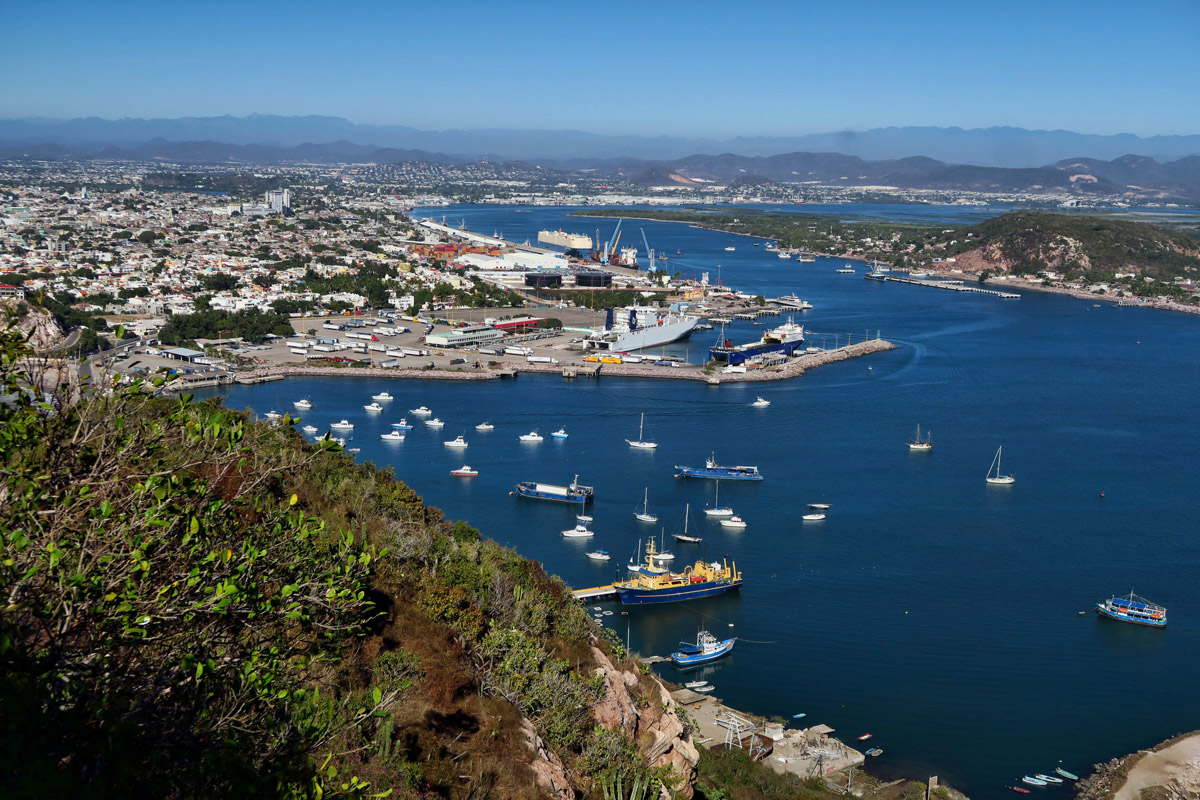 The largest white and blue boats just to the right of upper center are part of the Baja Ferry fleet.

I arrive at the base of the lighthouse without having done any research, my sole intent in crossing the shipping channel to Embarcadero Playa Sur being to check out the prices and times for the Baja Ferry.  Unbeknownst to me, the ferry office is only about a quarter mile from the entrance to El Faro, so I figure now is as good a time as any.   Though I brought no water or snacks for the short hike, I tell myself “she who hesitates is lost.” I’d better not wait on a later opportunity when I am better prepared, lest I miss out for the second time.

The climb up offers incredibly beautiful views and cool ocean breezes.  However, sadly, one deep inhale of the fresh ocean breeze evokes an immediate gag response, as the entry to El Faro is right next door to Mazatlan’s sewer treatment plant…..good incentive to race to the top, bandana covering my nose and mouth, in order to get up above the fumes.  Yet another reason I have found a bandana to be Nbr 1 on my “most useful travel items” list.   (Imma skip right past the consequences of the sewer treatment plant being positioned right alongside the most scenic stretch of coastline next to the malecon…”There but for the grace of the EPA go we.”) 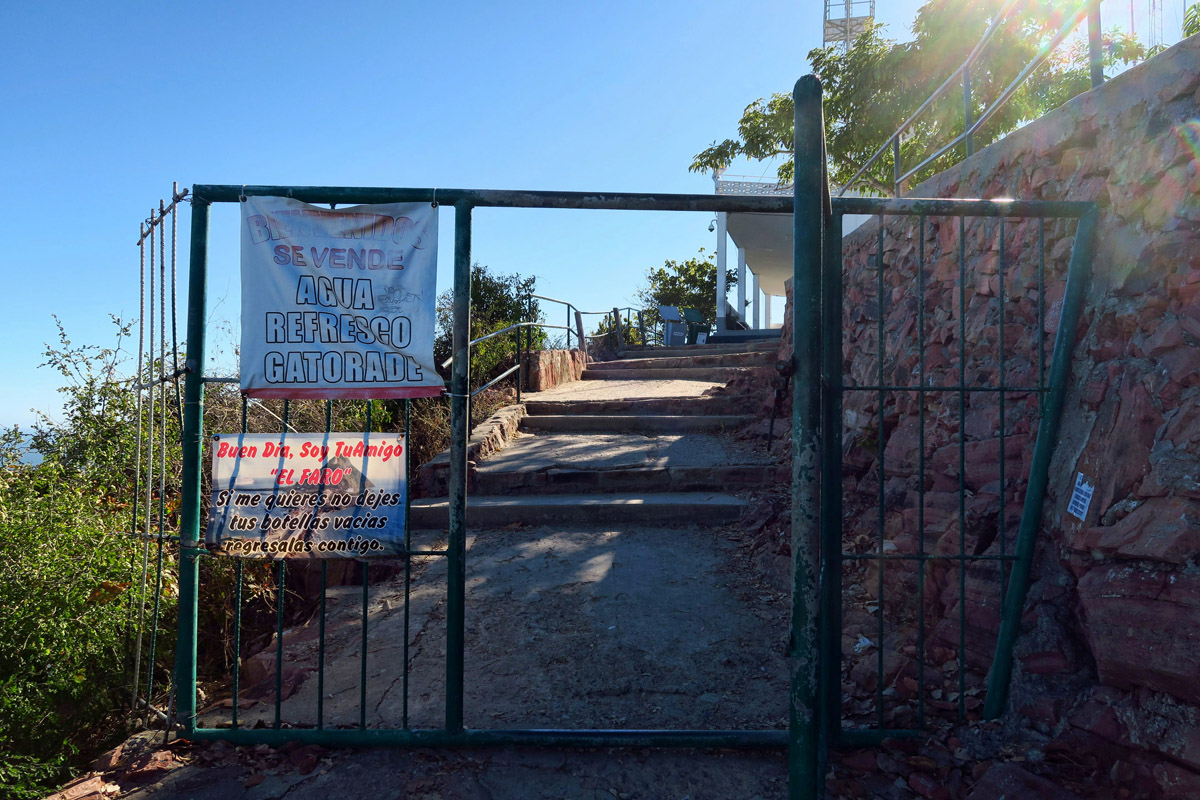 This gate surrounds the lighthouse. I am relieved to see there are refreshments for sale at the top! 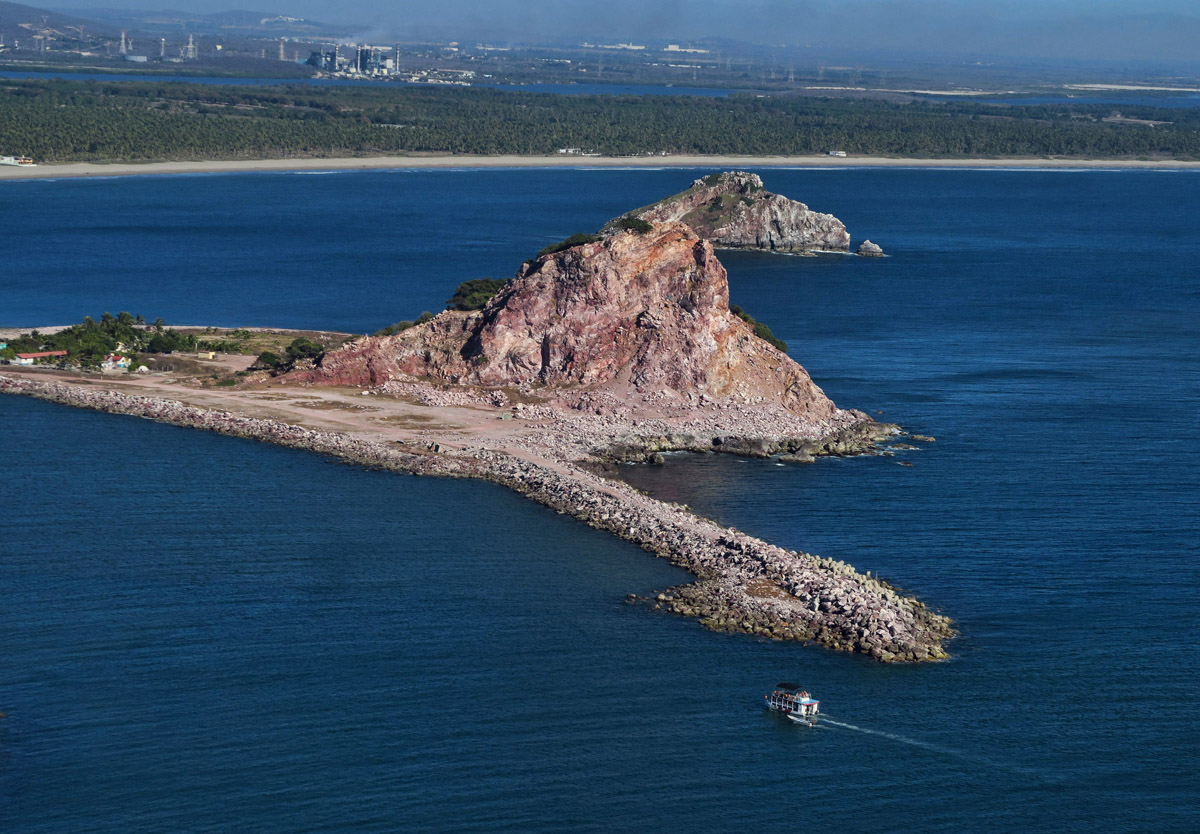 Looking down on Cerro de Los Chivos, or Goat Hill.

As advertised, the views from the path up to the top are spectacular.   I watch all types of interesting boats leave and enter the shipping channel, hear barking sea lions on the remote islands just offshore, and cast my eyes along the curvature of the shoreline to Isla de la Piedra and beyond…beach as far as I can see. 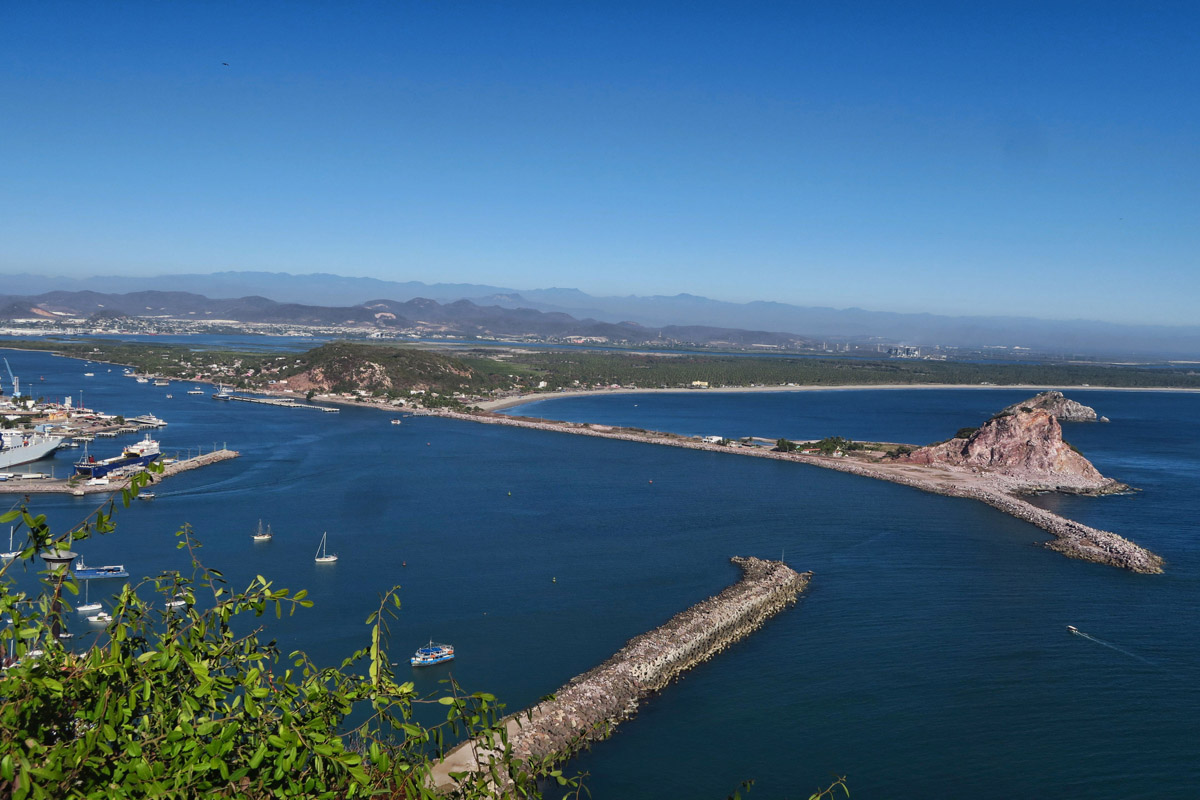 Looking out over the long expanse of beach that is Isla de la Piedra. The Tres Amigos RV Park where Contessa winters is near that dot of a yellow building in the center of the stretch of beach. 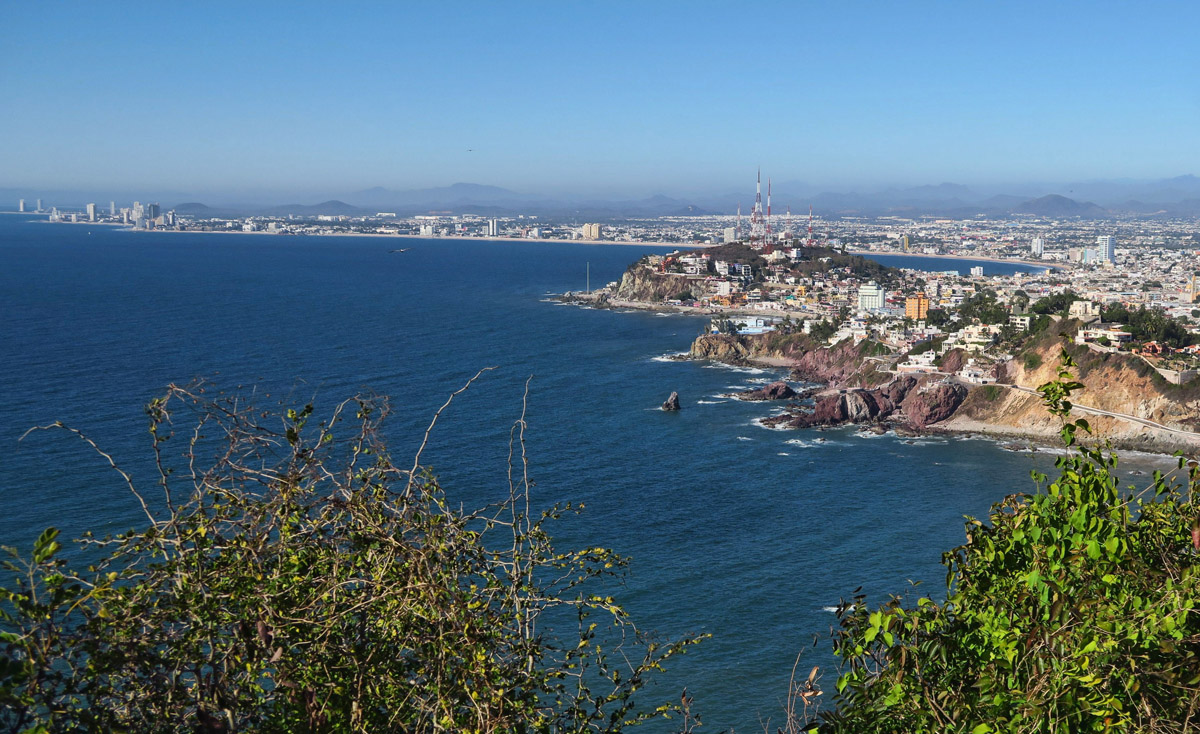 The highrises in the far left of the photo are the Zona Dorada, or “Golden Zone” for your peak tourist experience. 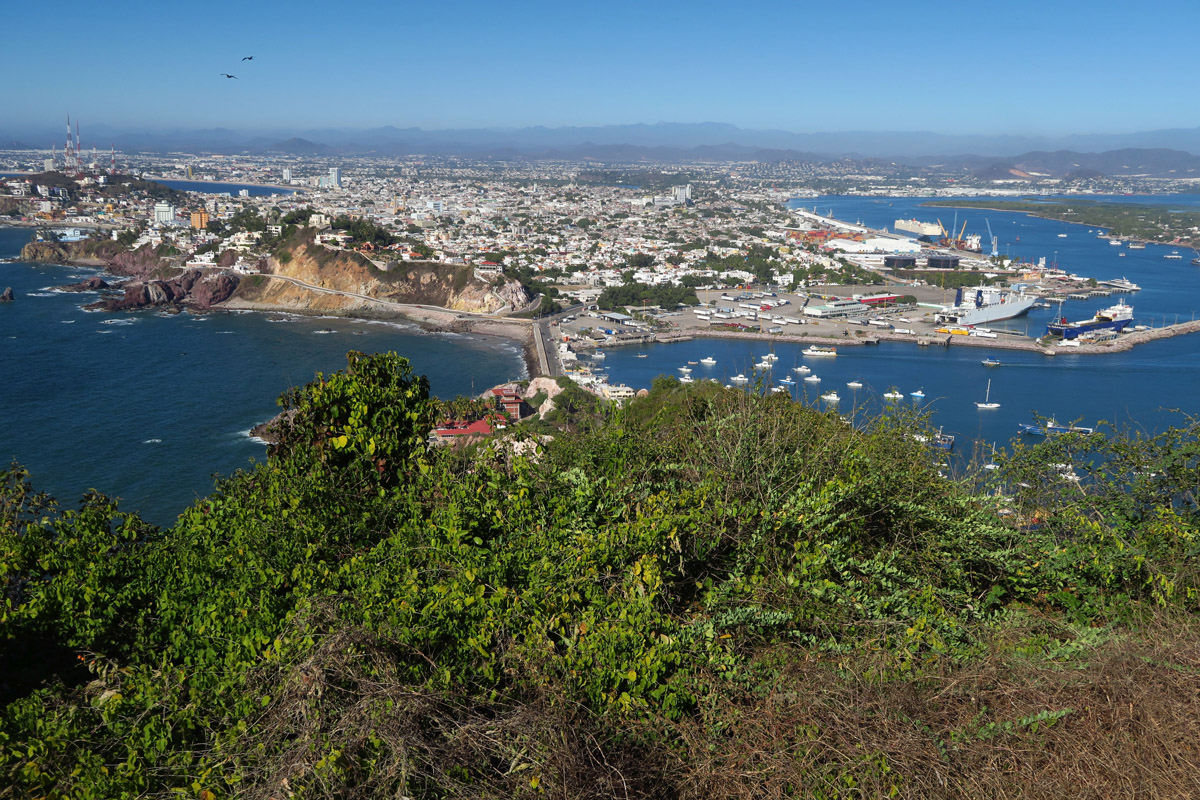 In this photo, it’s easy to see how Cerro del Creston, what was once an island where the lighthouse sits, was joined to the mainland by a pier.

Though it’s a cool day for coastal Mexico, the climb has made me thirsty, and all sorts of scenarios run through my head, asking myself “what kind of a hiker are you to set out without so much as a drop of water?”  But I am often surprised at the ingenuity of the Mexicans, as there at the top of the hill is a giant glass door freezer filled with bottled water and ice cold sodas.

I decide to do reconnaissance around the path circling the lighthouse first to see what kind of lamp is in operation, when I spot it…..there in the fire-engine red tower, I spot the familiar silhouette of the tiered glass “bee hive.”  It’s a Fresnel lens!   I did not expect to find this in Mexico!  Excitement overcomes me, and I begin paparazzi-like moves around the building, shooting every angle, hunting for the best vantage point. 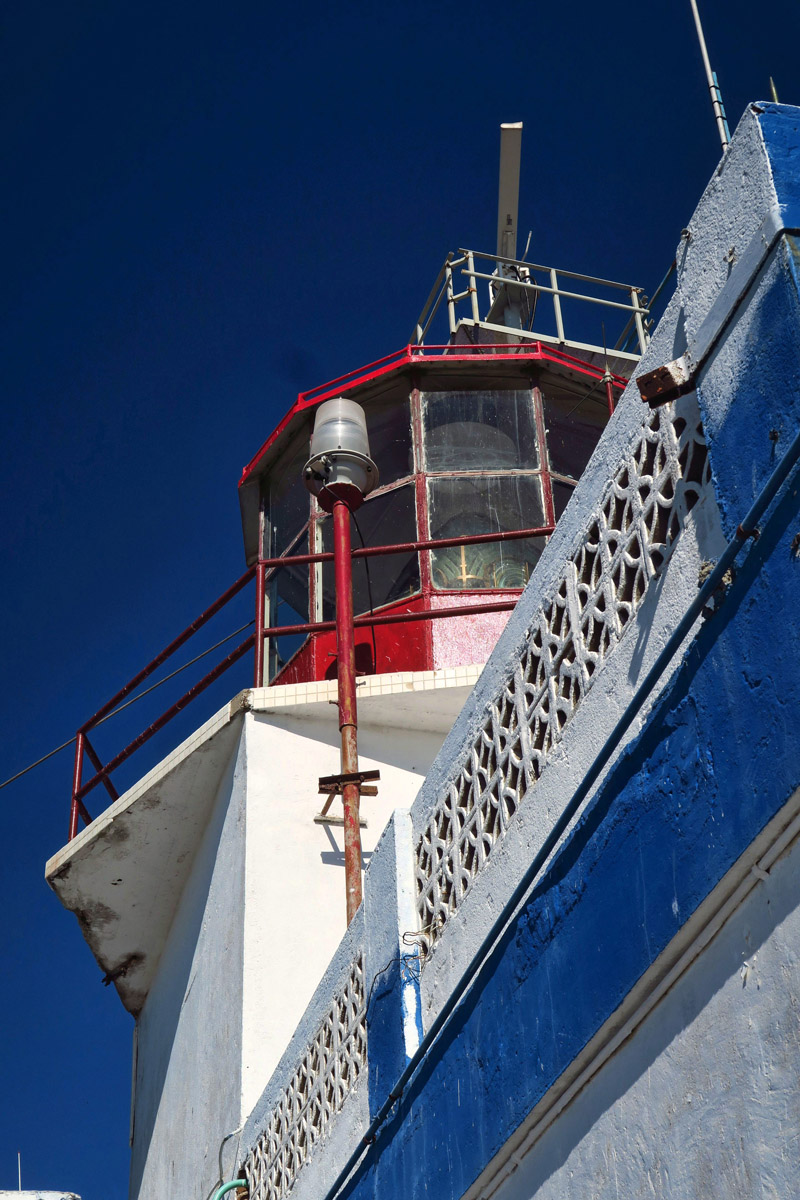 My first glimpse. I can see the brass of the Fresnel lens glinting in the sunlight… 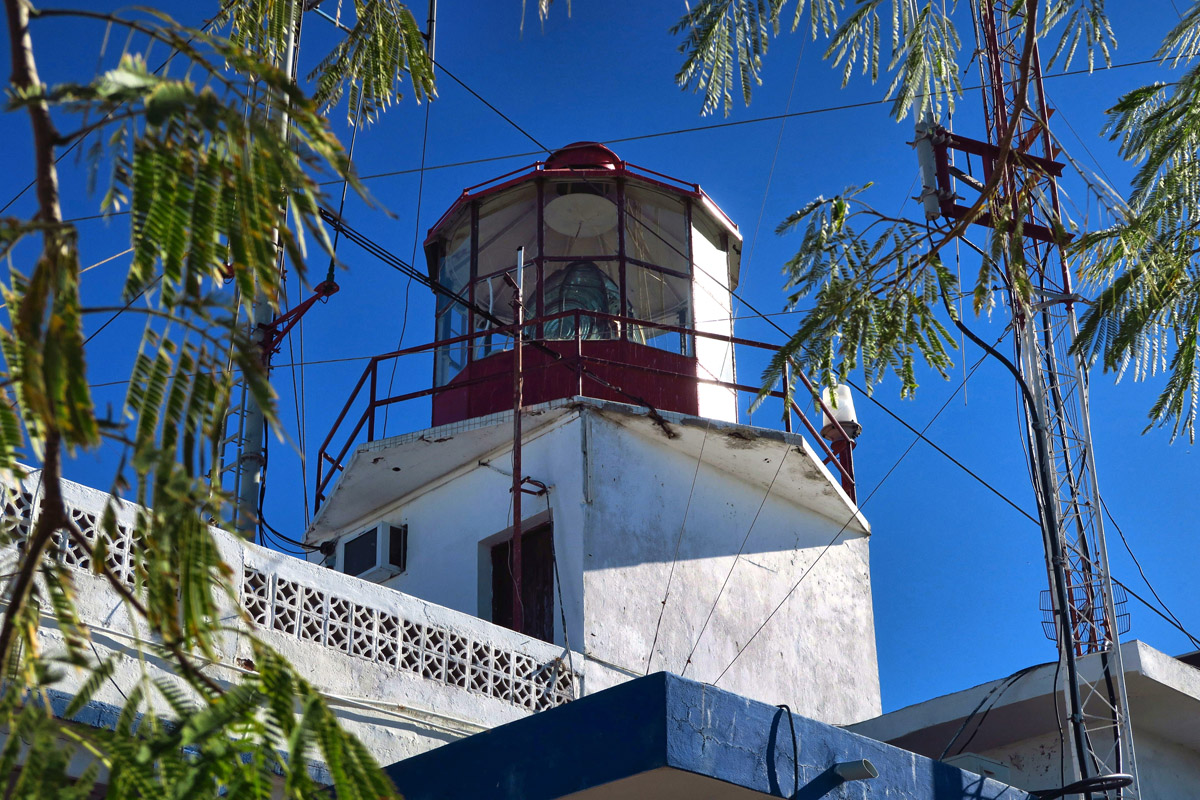 I circle around to get a better view…. 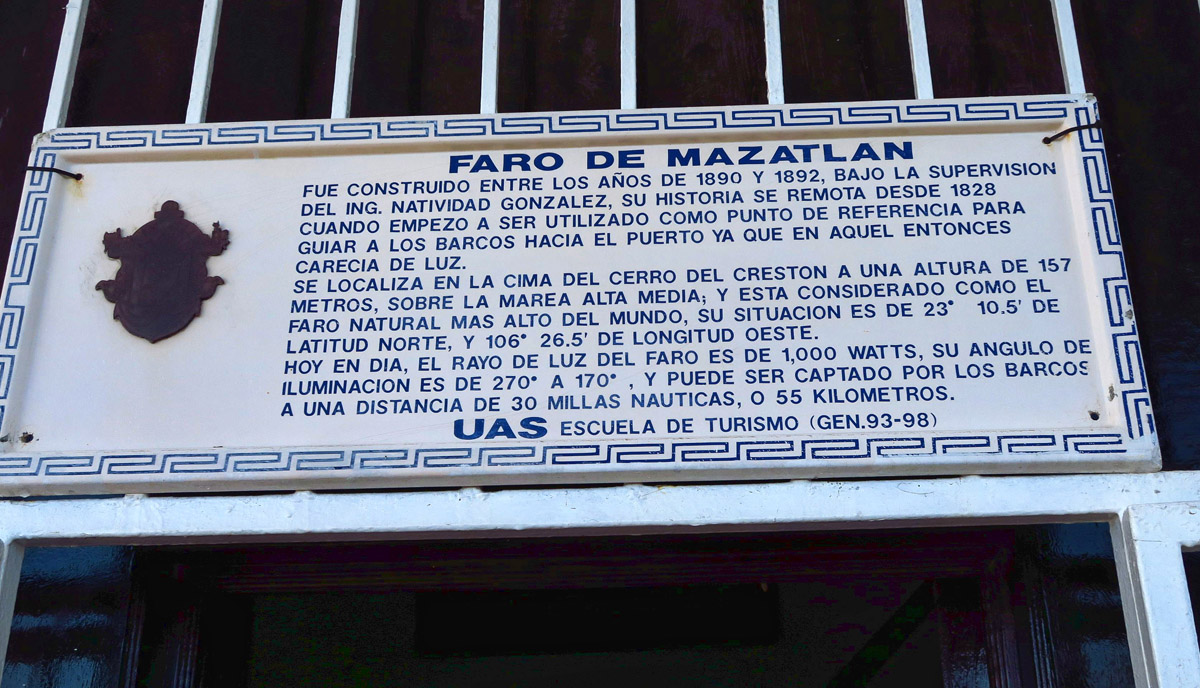 The sign over the entrance says that the Lighthouse was built between 1890 and 1892, and has a 1,000 watt lamp that can be seen for 30 nautical miles. 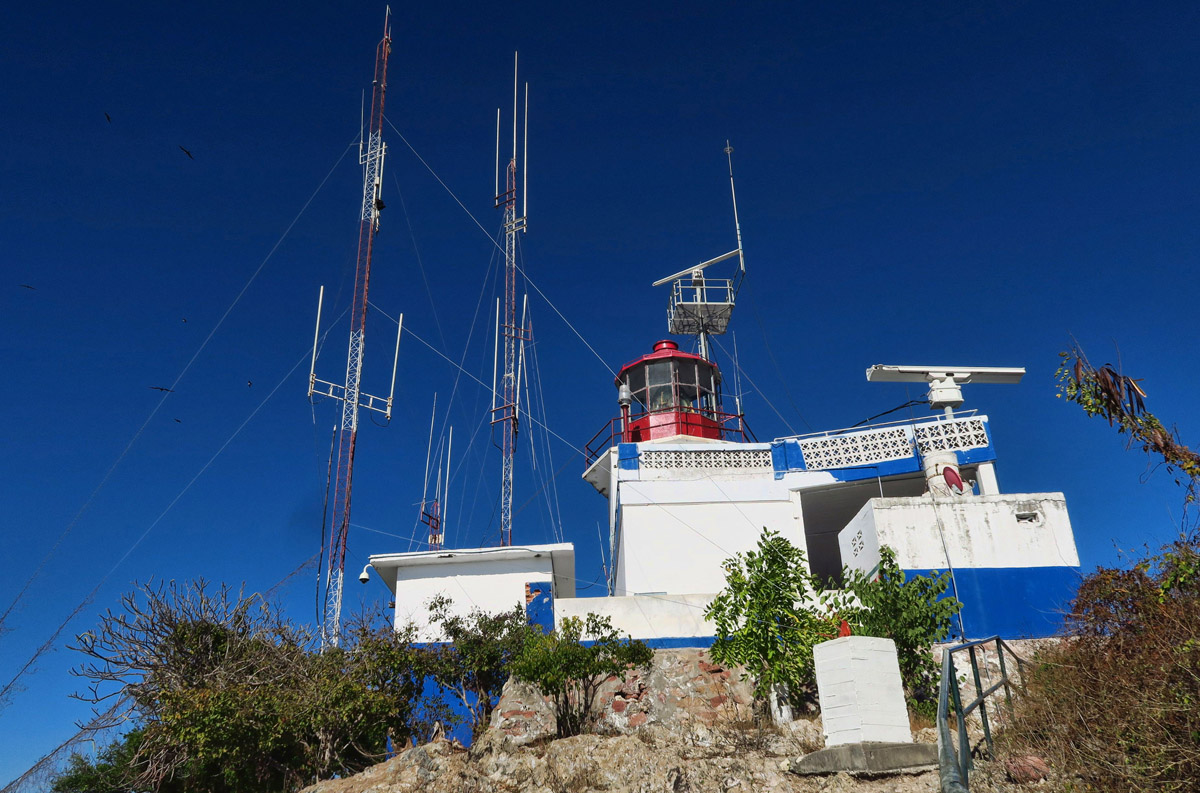 Although this lighthouse is the highest in North America, it’s not the “tallest.” Its height is due to the elevation of the hill at over 500′.

Having circled the perimeter, I head inside the building to see what the chances are for getting a closer look.  The light station is manned by a middle aged Mexican gentleman standing guard, his arms tightly folded.  I purchase a bottle of water from him, and start trying to chat him up in my best, albeit limited, salutatory Spanish, all the while trying not to be discouraged by the “Entrada Prohibida” sign dangling from the plastic yellow chain strung across the spiral stairway leading up to the lamp room.

I don’t get very far in my conversation due to my limited Spanish:

At this point, I am unsure if the answer really is “No, NEVER!” or just a way to avoid my poor attempts at Spanish.  So at this point, I just begin babbling in English, grinning like an idiot while pointing at myself saying “Loco para los faros!”    He just continues to stand there shaking his head.

And then, I say what appears to be the most unlikely of passwords.   Using my best line from the Taco Bell Chihuahua, I say “Yo quiero Fresnel lens.”   All of a sudden, his crossed arms drop, he turns and walks away, and comes back with a huge poster of Augustin Fresnel, French inventor of the glass prisms that grace the tops of lighthouses coast to coast.   He points to the picture and says “FREZ-nel” (Unlike the French pronunciation, in Spanish the “s” is enunciated.)  “Si! Si!  Fresnel!”  I reply with almost as much excitement as Elliot when E.T. said “Phone home.” 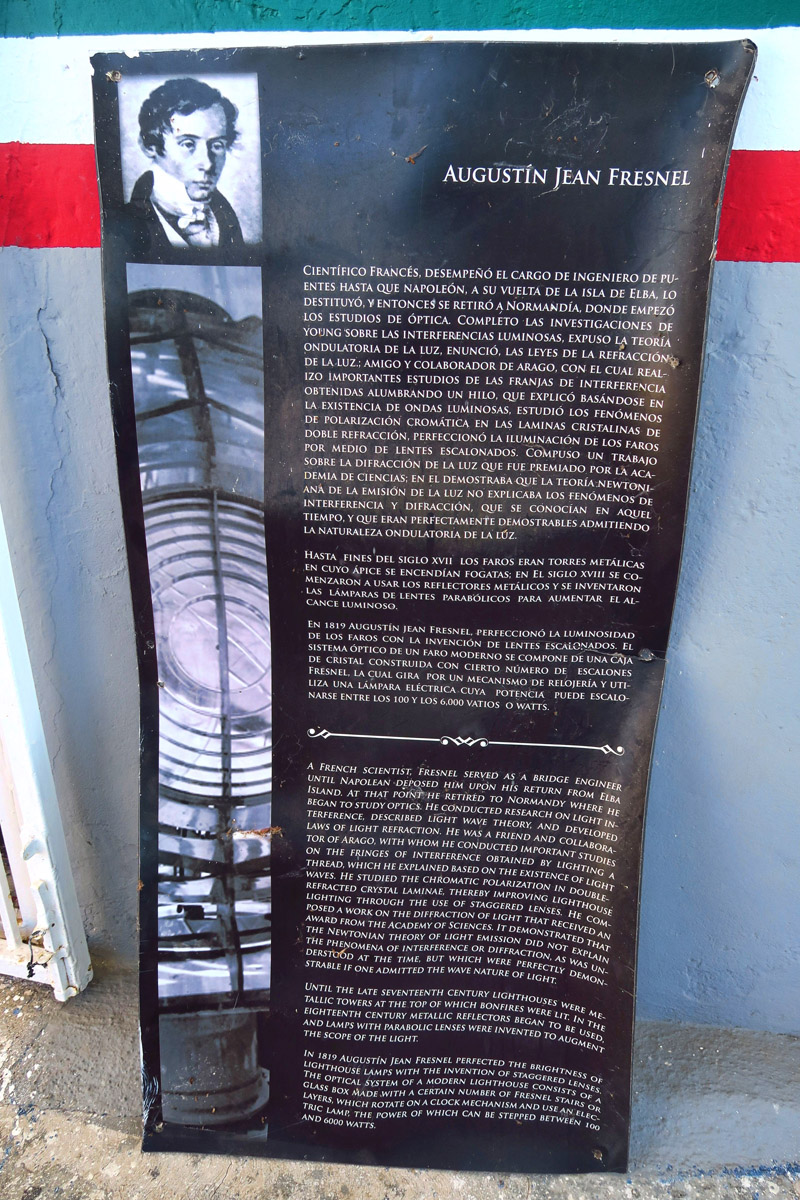 Out of the storage closet comes an almost life-sized, warped and worn poster of Augustin Fresnel and his claim to fame, the lighthouse lens, written in both Spanish and English. 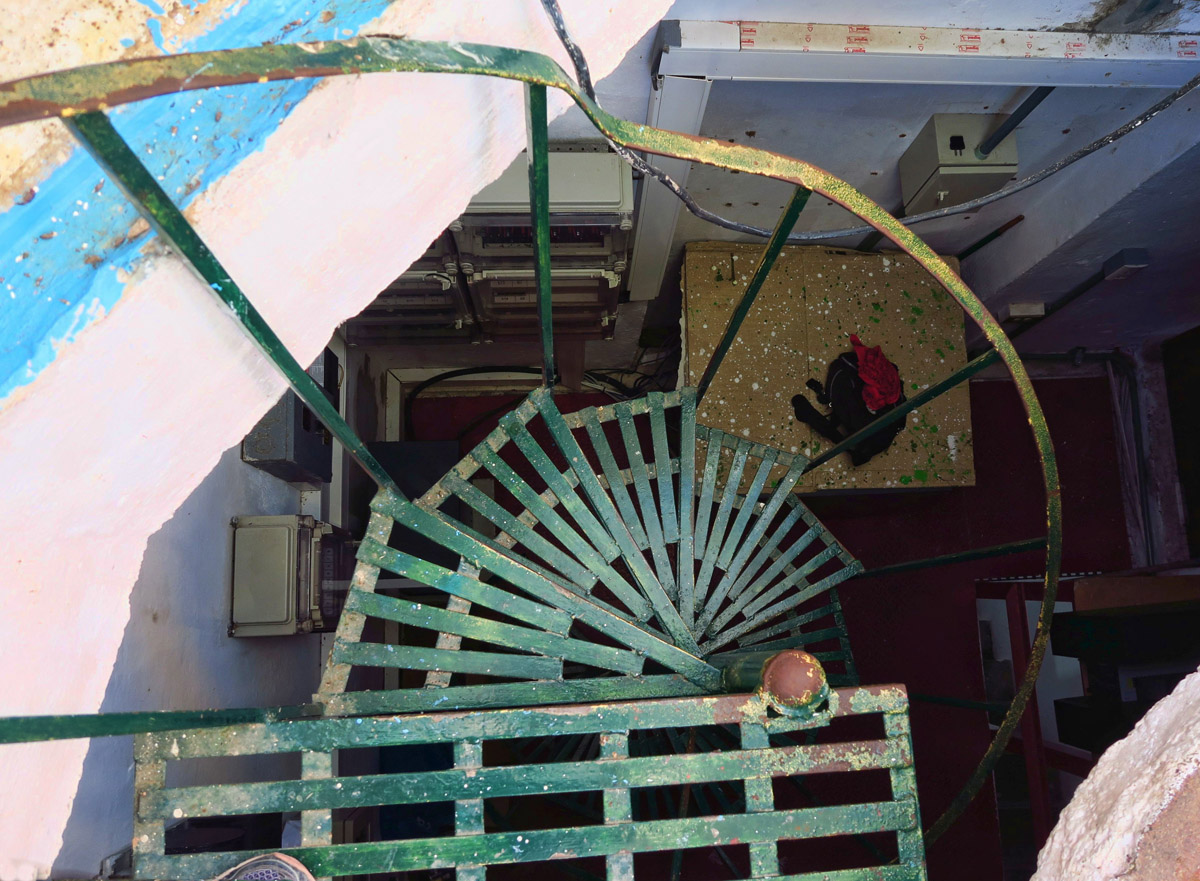 And just like that, the man walks over to the spiral staircase, drops the yellow plastic chain, and extends his hand out in a welcome gesture, no doubt wondering what could possibly be so exciting to the “gringa loca” about a navigational aid… 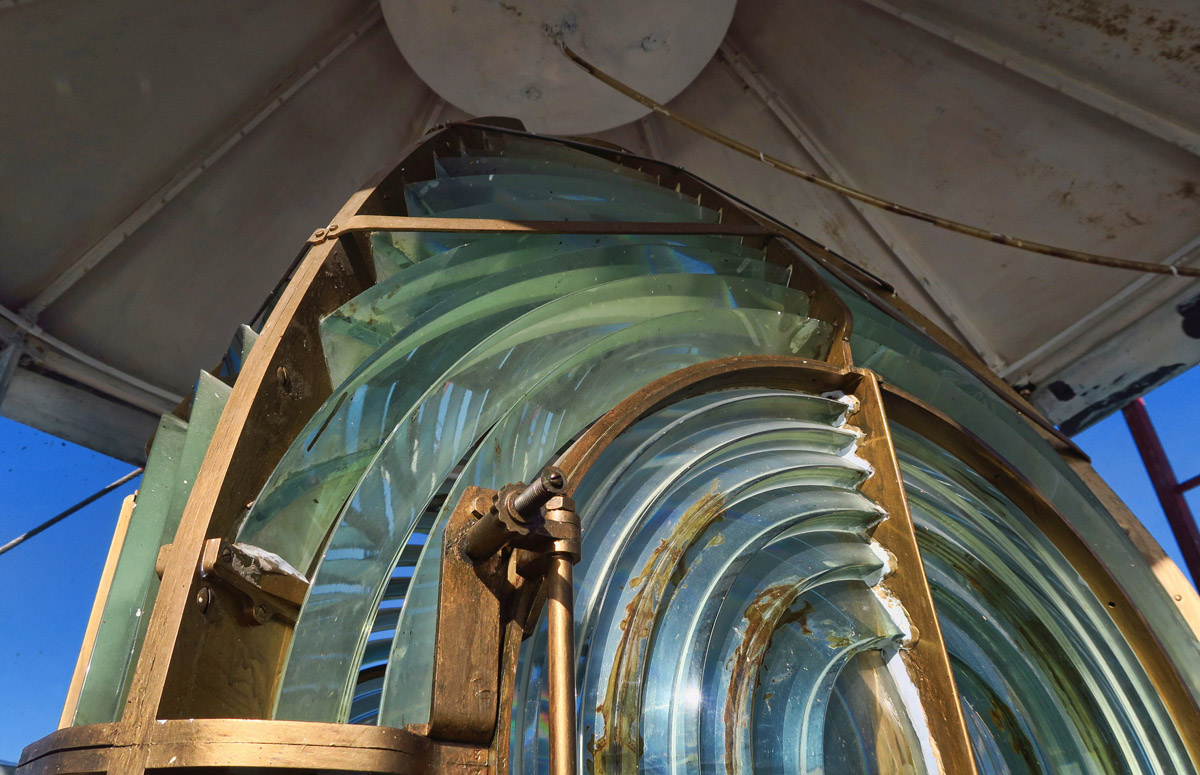 Oh, for a wider angle lens! 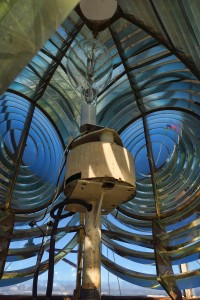 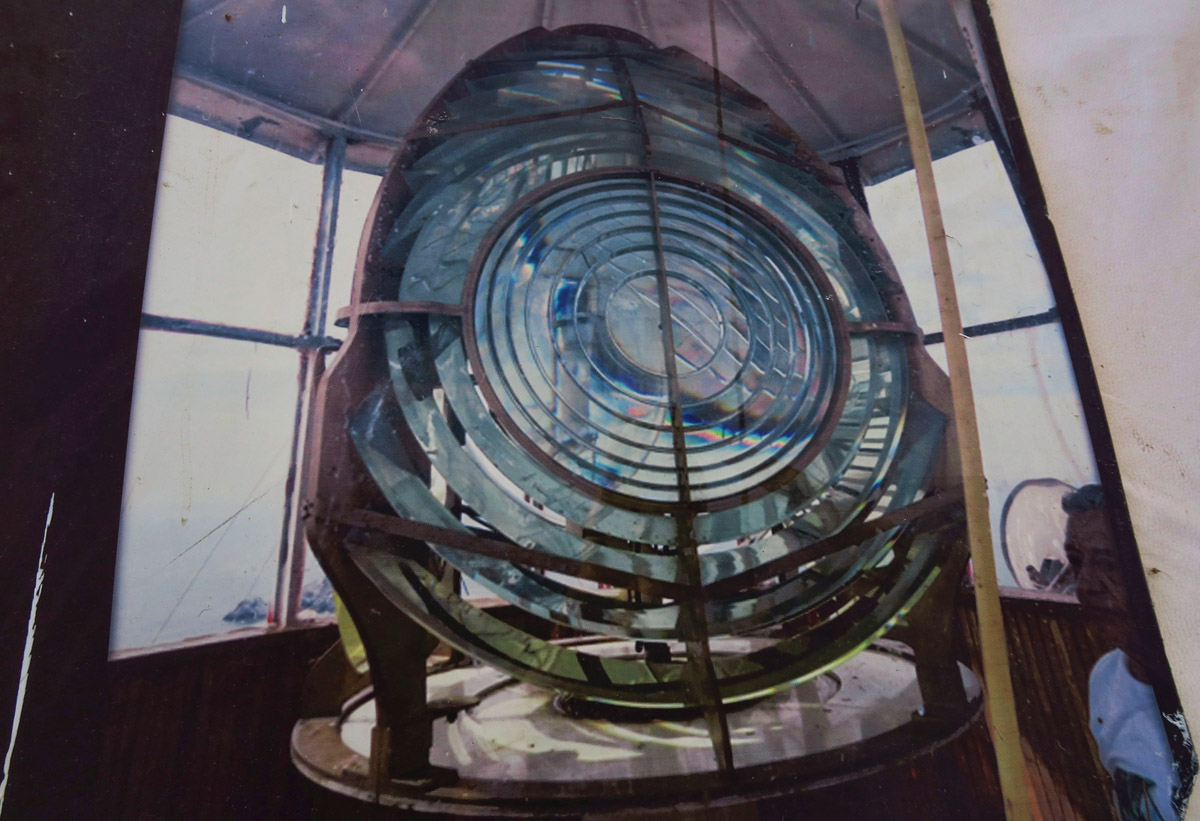 I can’t get the full lens in my camera view, so this is a photo of a reflection in one of the mirrors. Note what was the guard, now my guide in lower right corner. 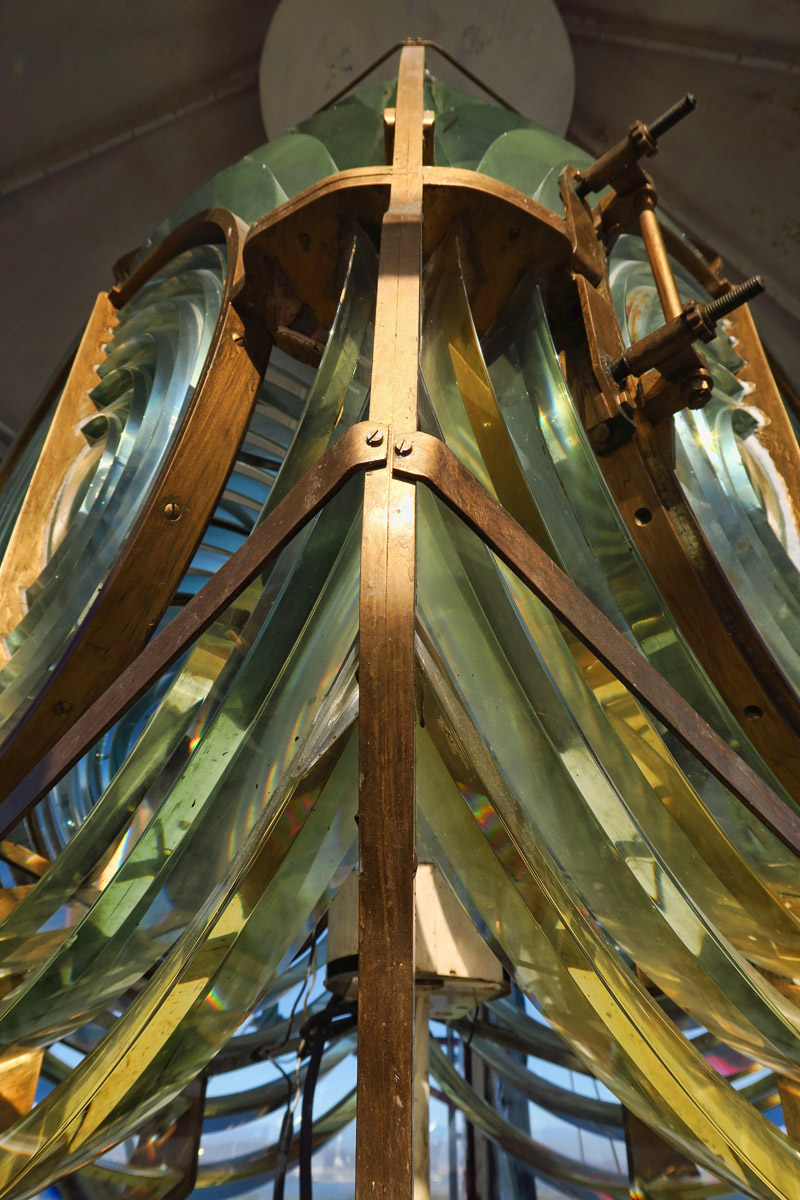 As beautiful as it is, though, it makes me a little sad to see it so dull and dirty. Oh, for a bottle of Windex and a can of “Brasso!” 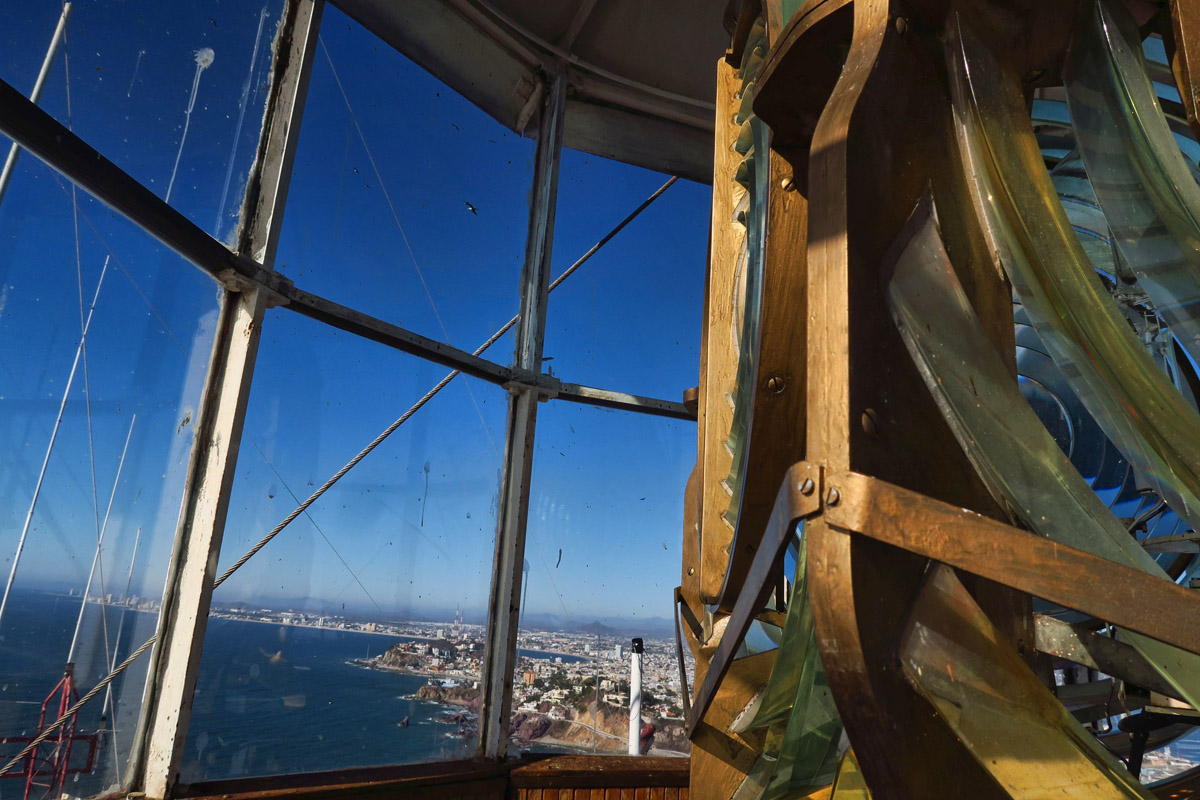 Who could resist the urge to applaud these views?