I crossed the border at Tijuana on foot, then caught the “Tijuana Trolley,” in San Ysidro bound for San Diego where my dear friend Margie picked me up. We caught up over lunch at Stone Brewing Co, then she dropped me off at the car rental place.  After a few days in SoCal, I boarded a plane from San Diego back to Texas, almost two months to the day that I left on the bus bound for San Miguel de Allende, ending in one big sweeping clockwise circle through Mexico. 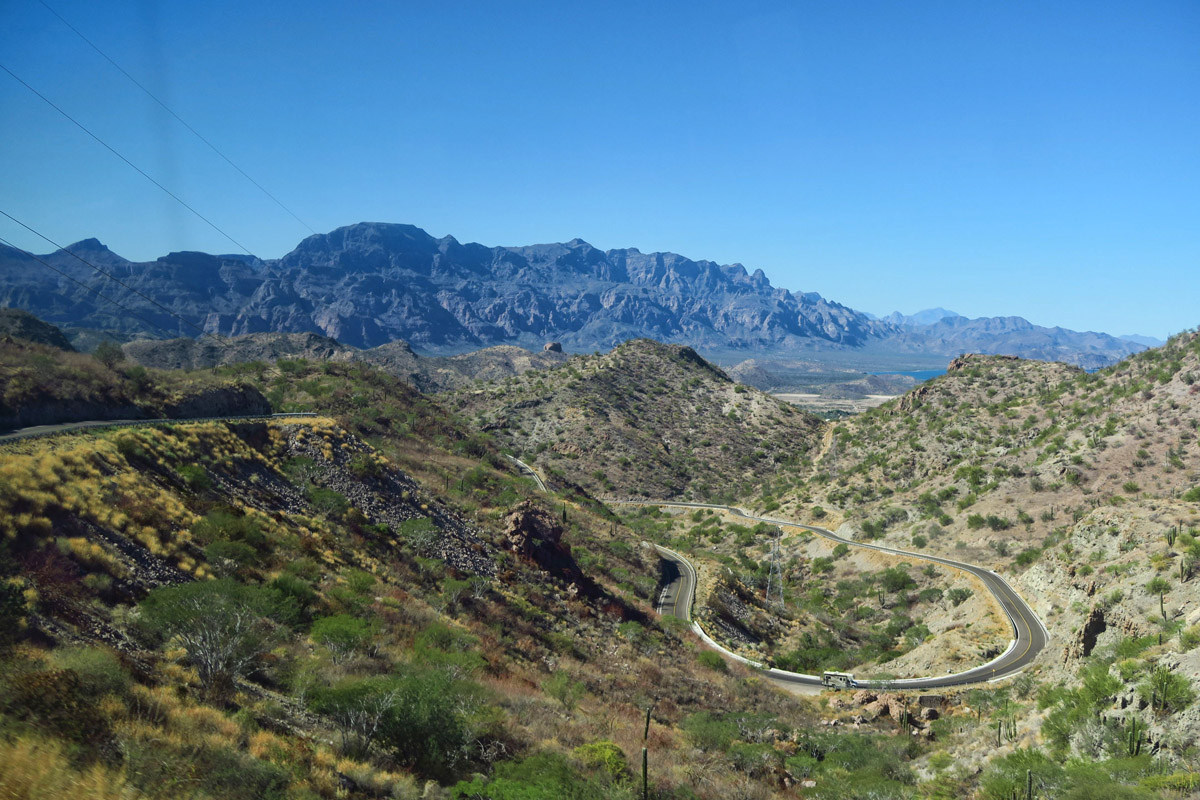 A lot of people ask me why I don’t bring my RV down to Mexico….because if I did, I would be focused on the yellow stripe down the center of the highway, and would miss beautiful views like this! 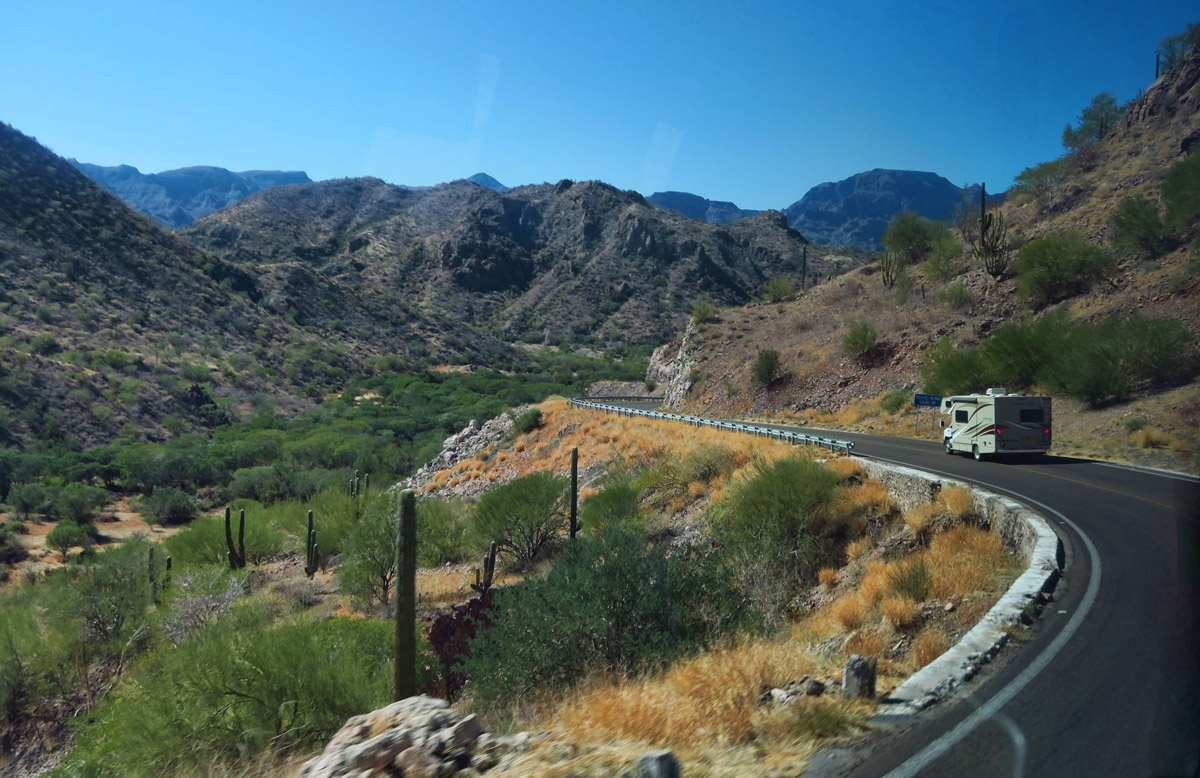 Highway 1 down through Baja would be easy driving as long as there were no big trucks taking their half down the middle. 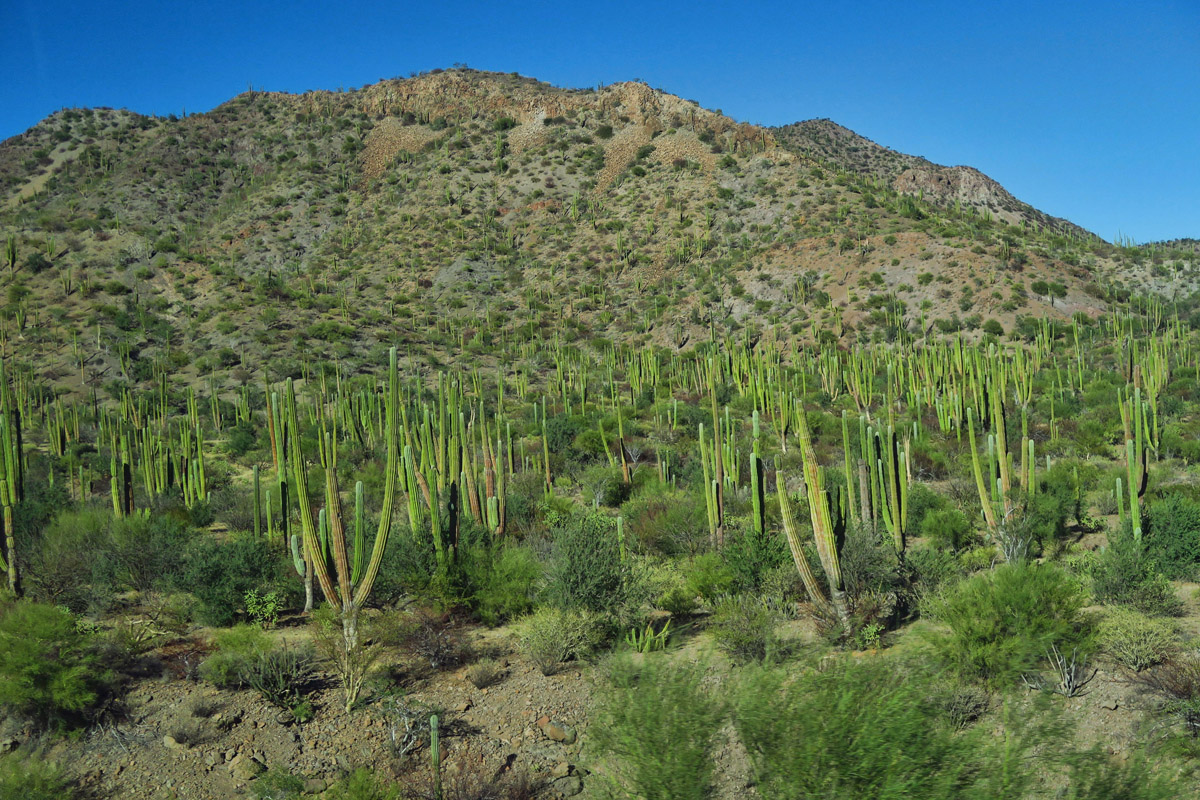 At times, Baja makes me think of the Sonoran desert.

When I set out for San Miguel to revisit an annual New Years tradition with my brother, I never dreamed I would end up in Baja.  I figured I would tour around Colonial Mexico for a while, spend a week at the beach, then work my way back north much in the direction I had come.  But once I hit the beach in Zihuatanejo, I wanted more, more, more.   Having spent most of December in single digit temps, I just couldn’t seem to get warm.  Zihau was like a soothing heating pad on my cold and weary bones. 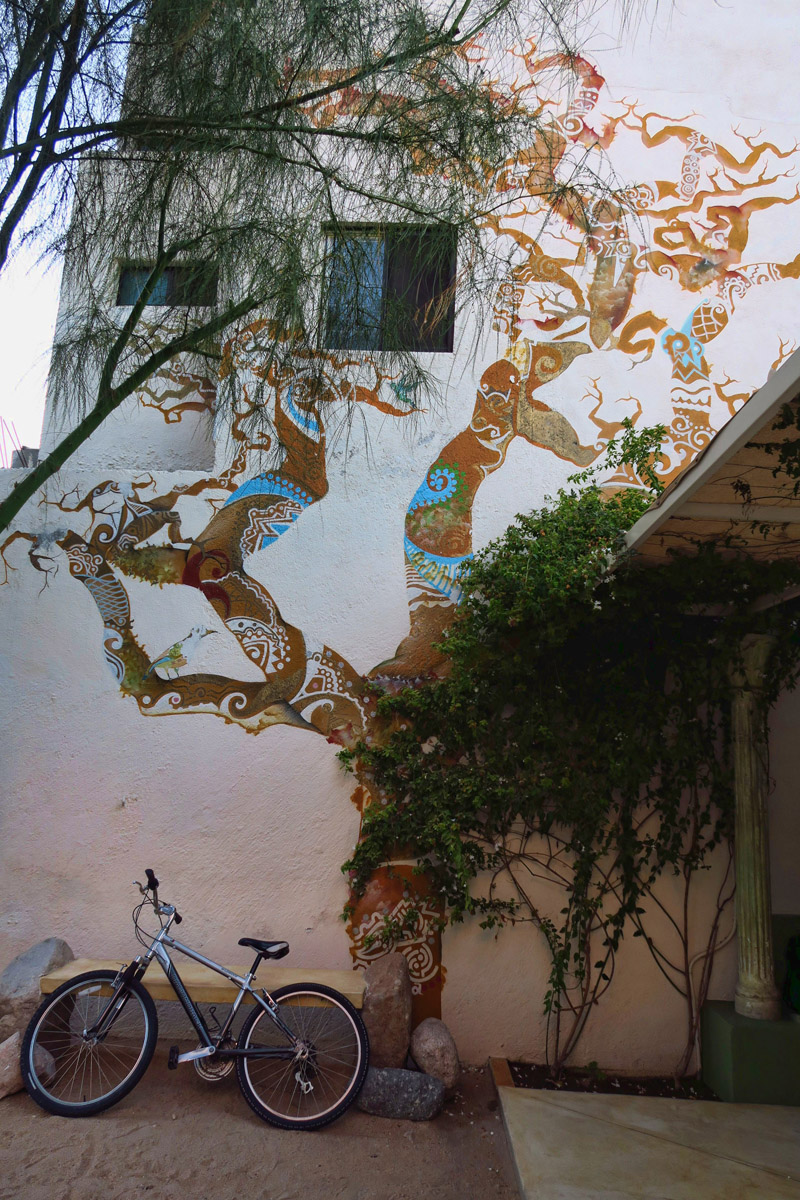 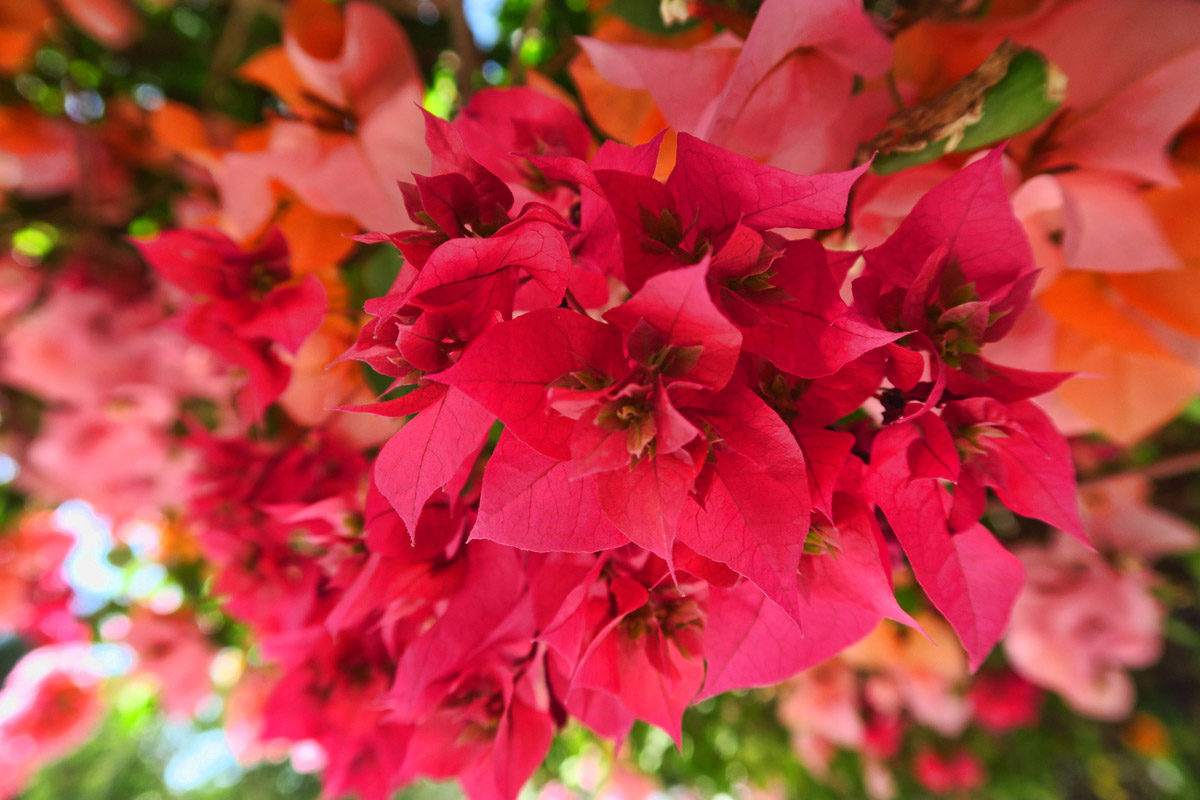 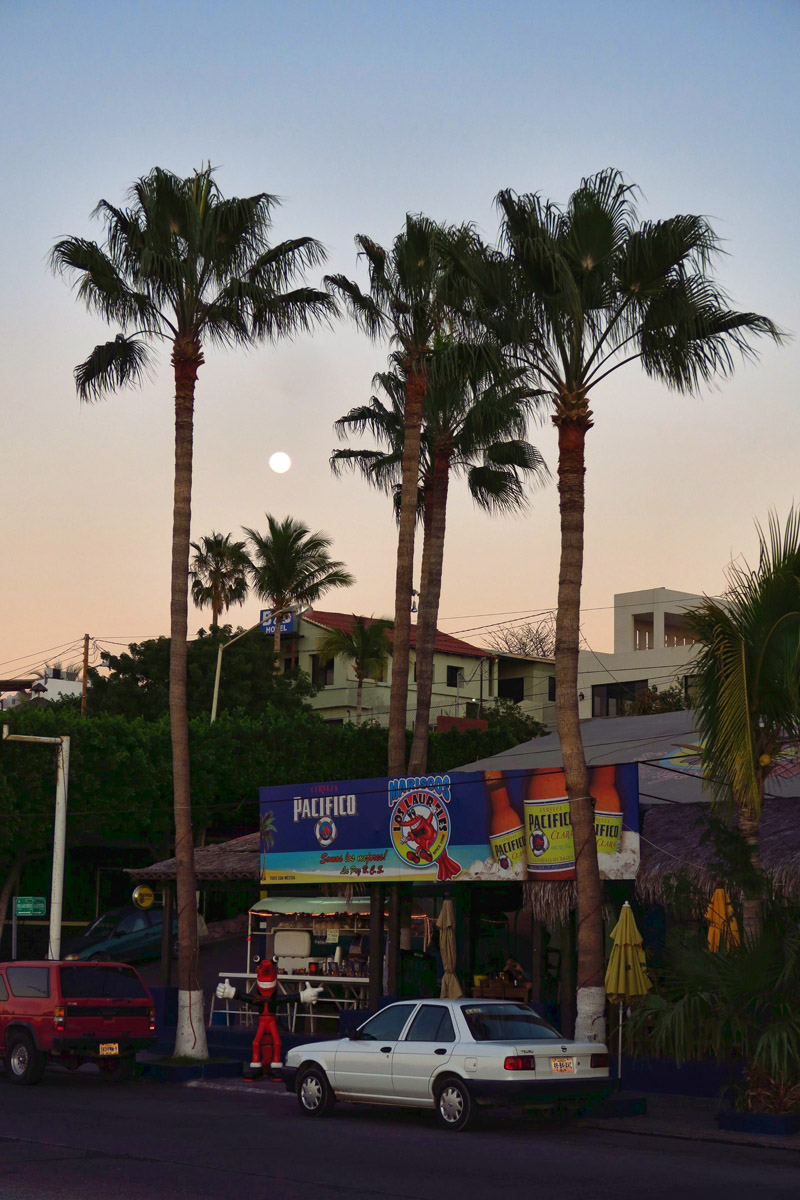 Full moon over one of my favorite restaurants in La Paz, Mariscos Los Laureles. 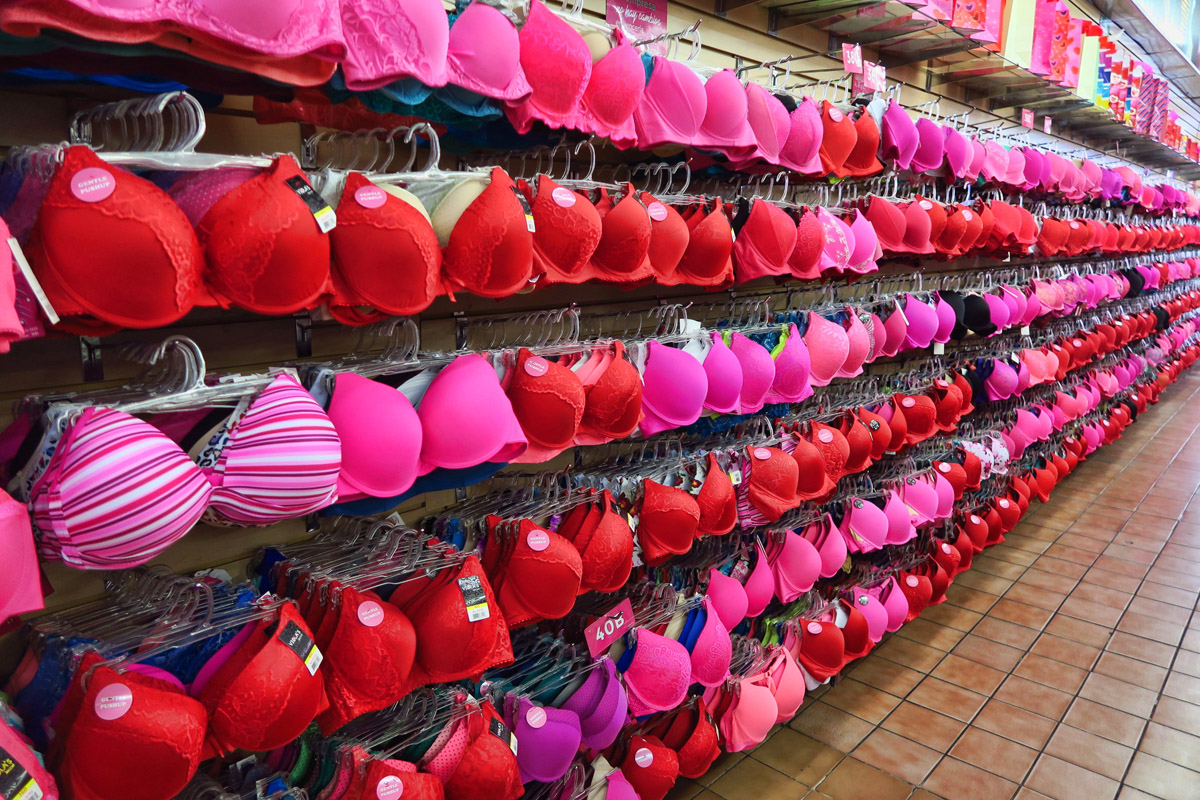 So in trying to decide which direction would afford me a guarantee of more of the same, Baja was the “known entity.”  After all, I had spent 17 blissful days there last winter in a slow crawl down the peninsula, stopping at every beach hangout serviced by the ubiquitous Aquila bus line.   So if seventeen days was good, what bliss it would be to return this year with no set schedule, right? 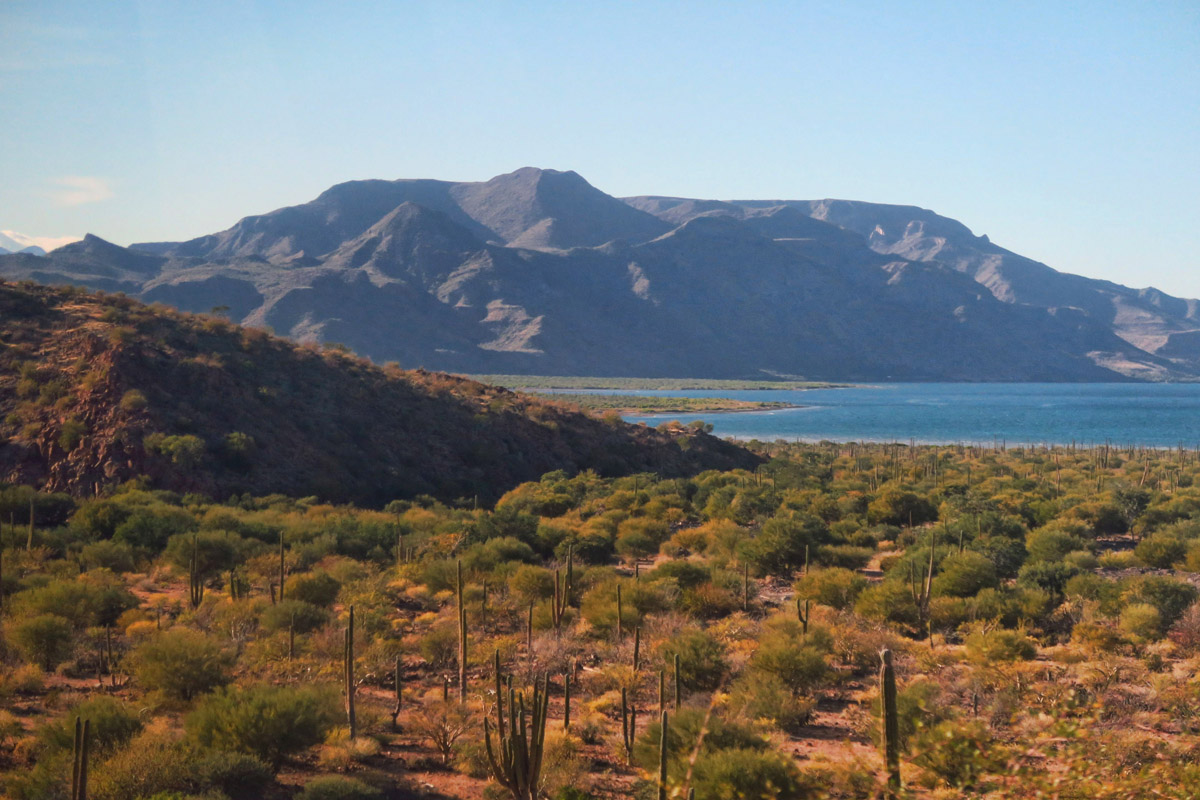 The highway between Loreto and Mulege is particularly scenic. 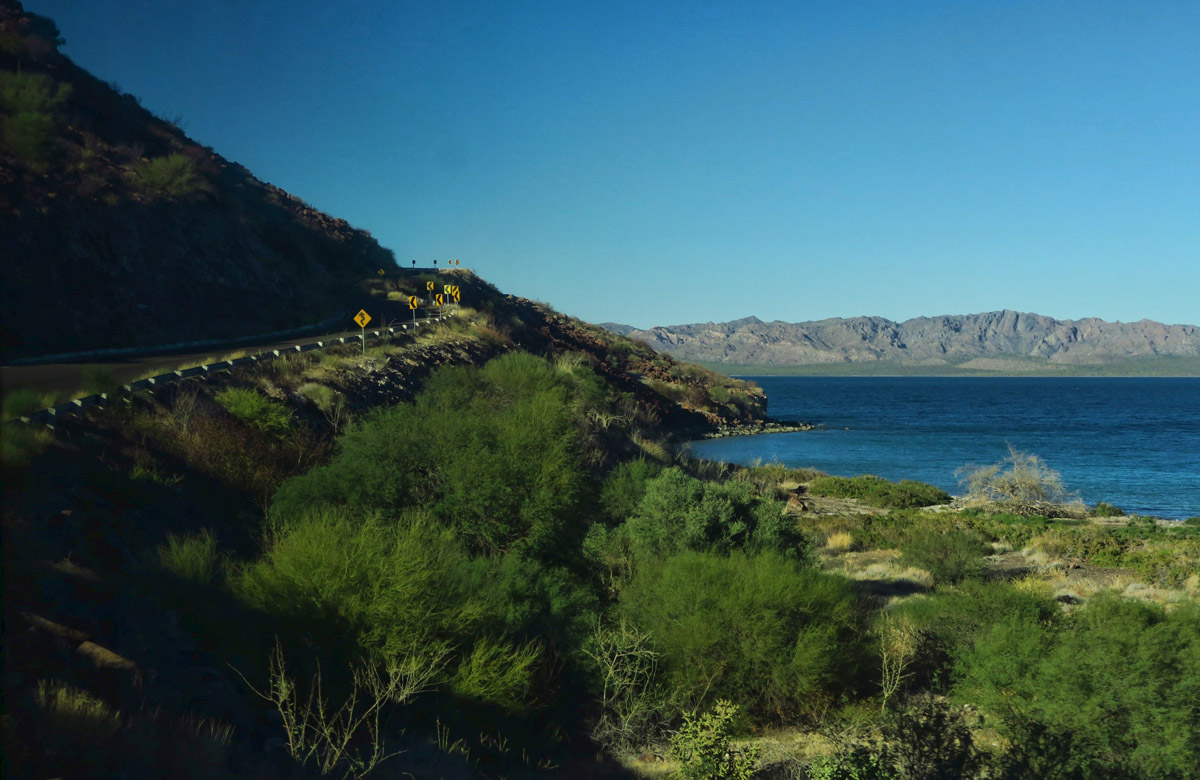 It follows the Sea of Cortez for many miles. 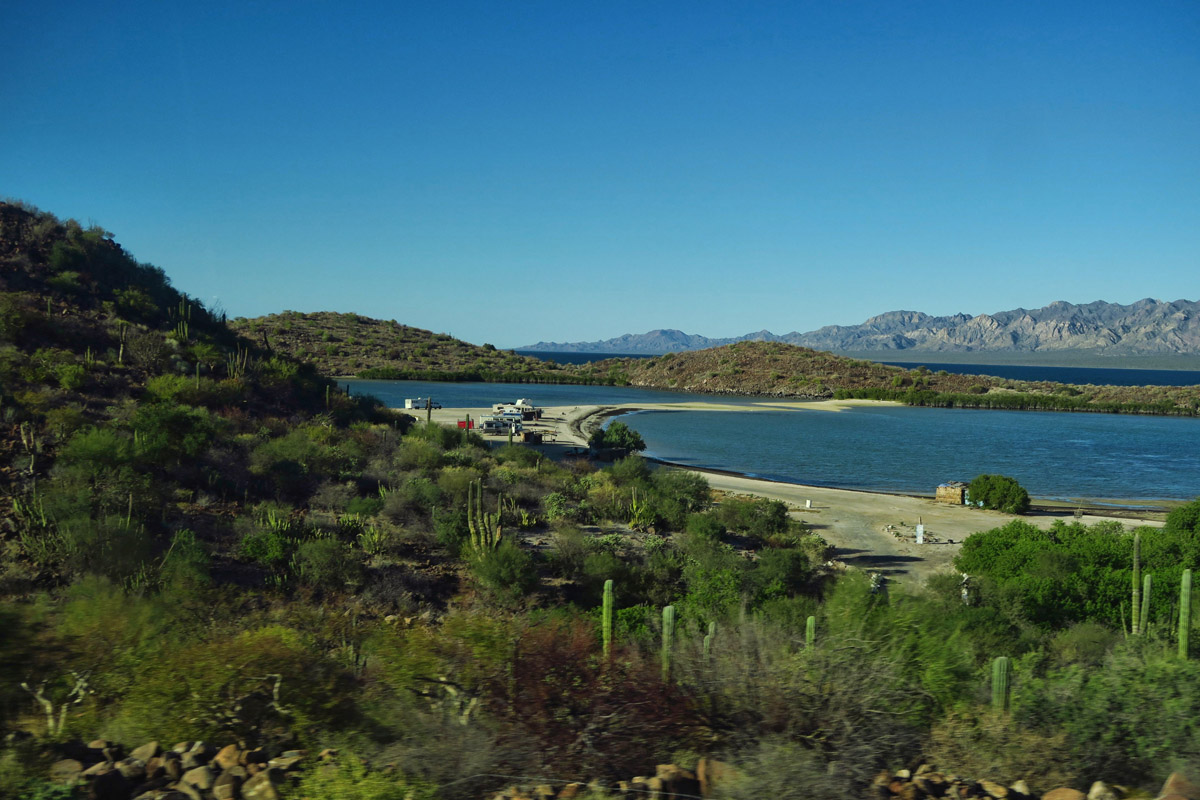 Lots of RVers along Bahia Concepcion. 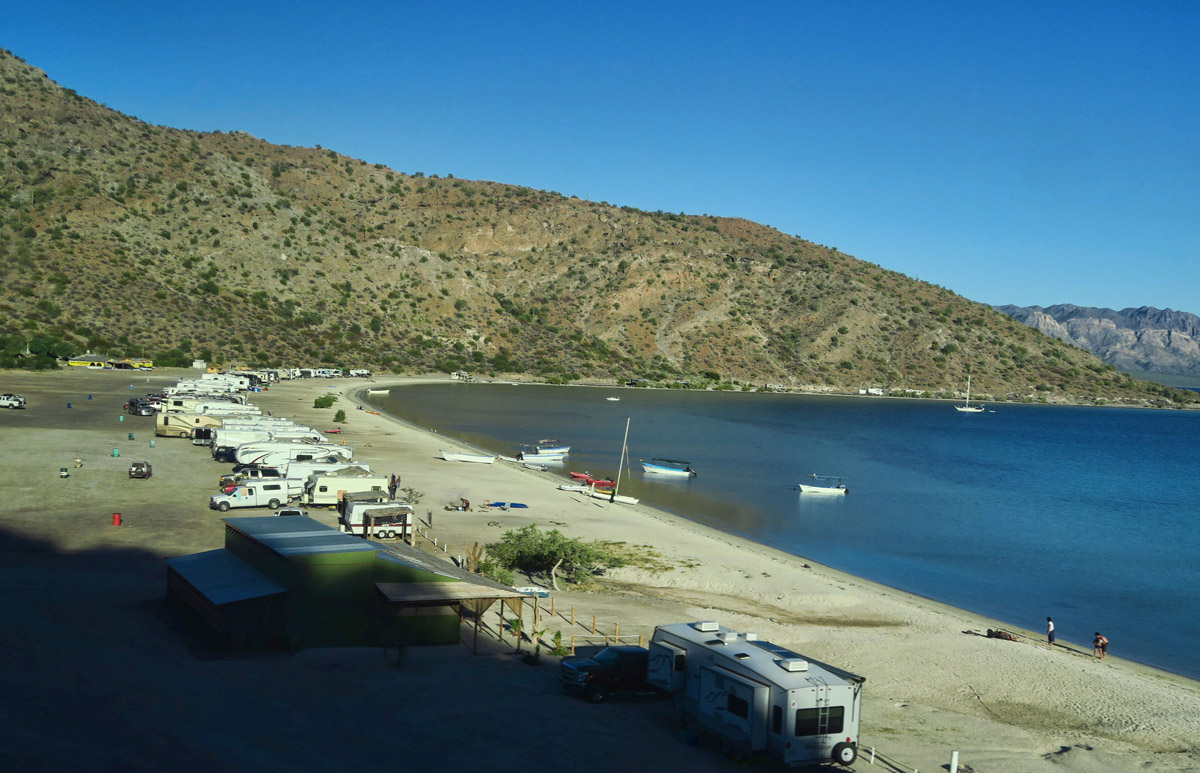 It seems a lot more crowded this year than last year, but it seems I say that a lot…

But like her pale aquamarine shimmering bays, Baja can be a bit shallow.  It’s all about the beach, which is blissful to a certain point.  But woman can only live on seafood and sea life for so long.  In short, I got a bit bored.  Having hit the high spots last year, I thought I would dig deeper this trip.   But what I soon learned was, the high spots were the only spots….unless one has their own transportation. 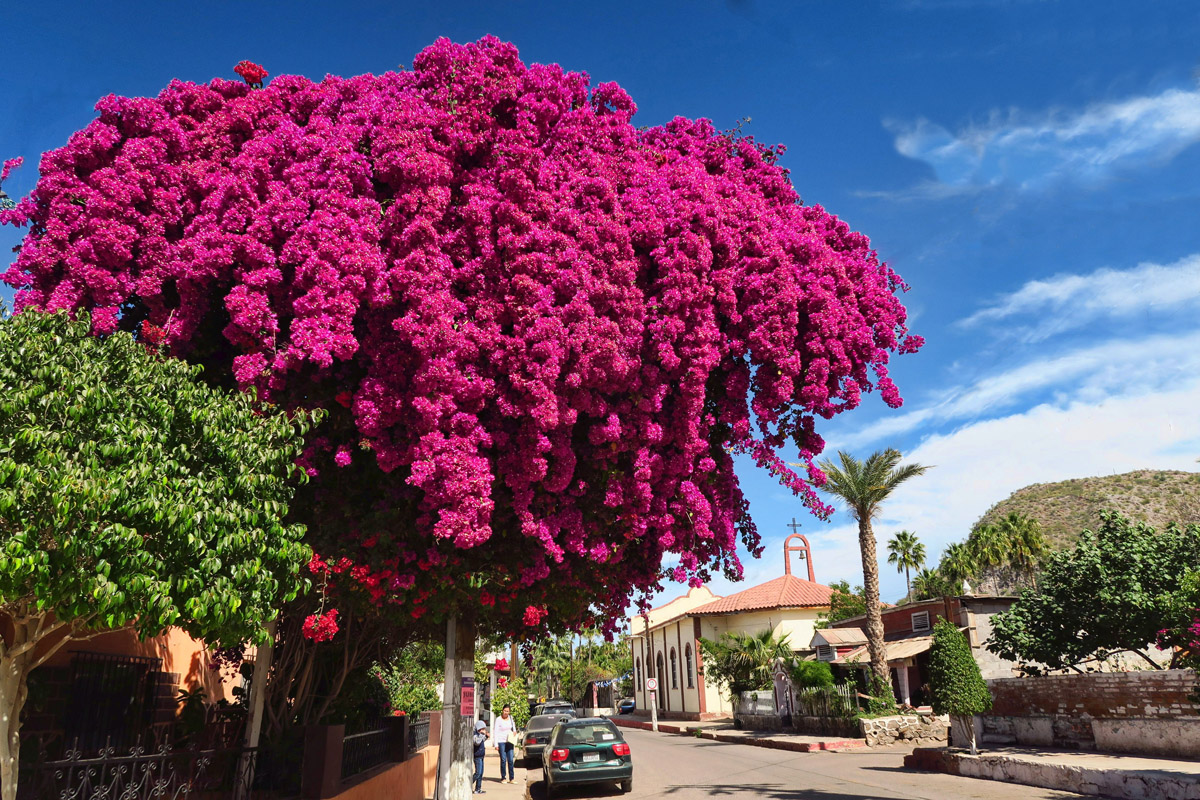 Beautiful downtown Mulege, one of my favorite stops along the east coast. 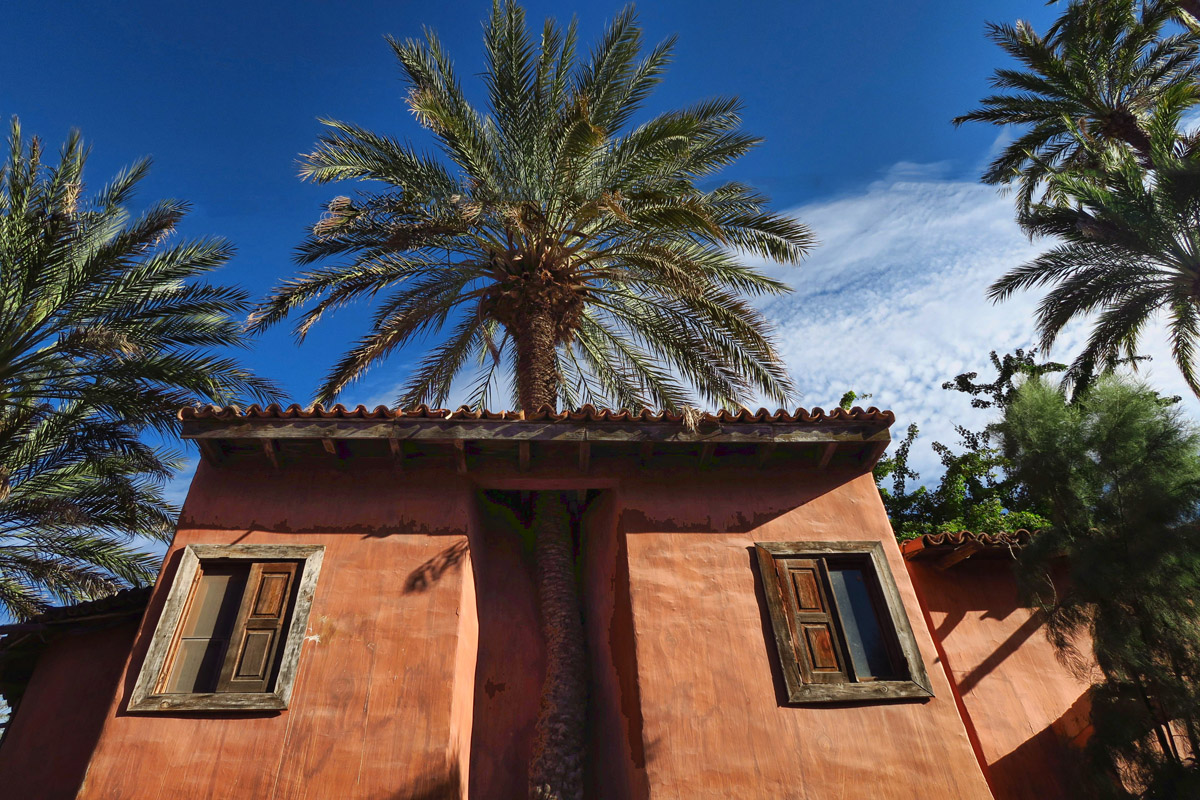 I love how this palm tree goes right through the roof! 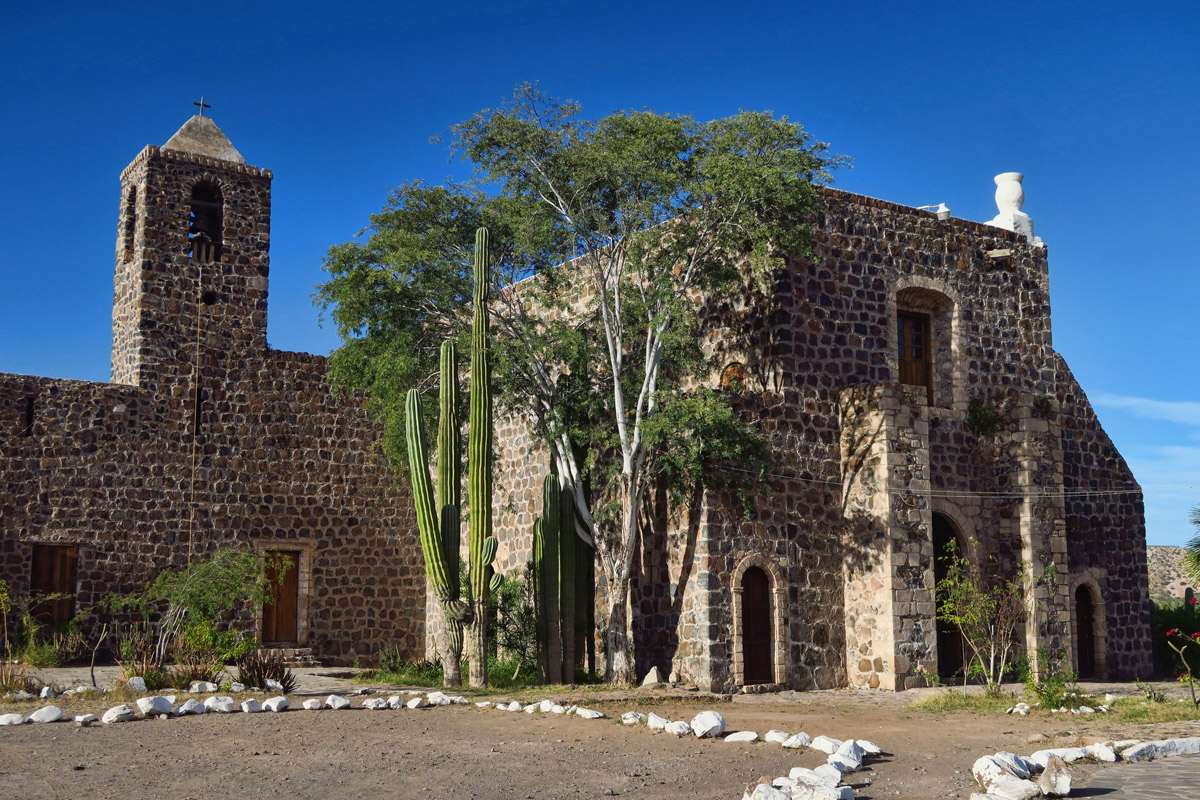 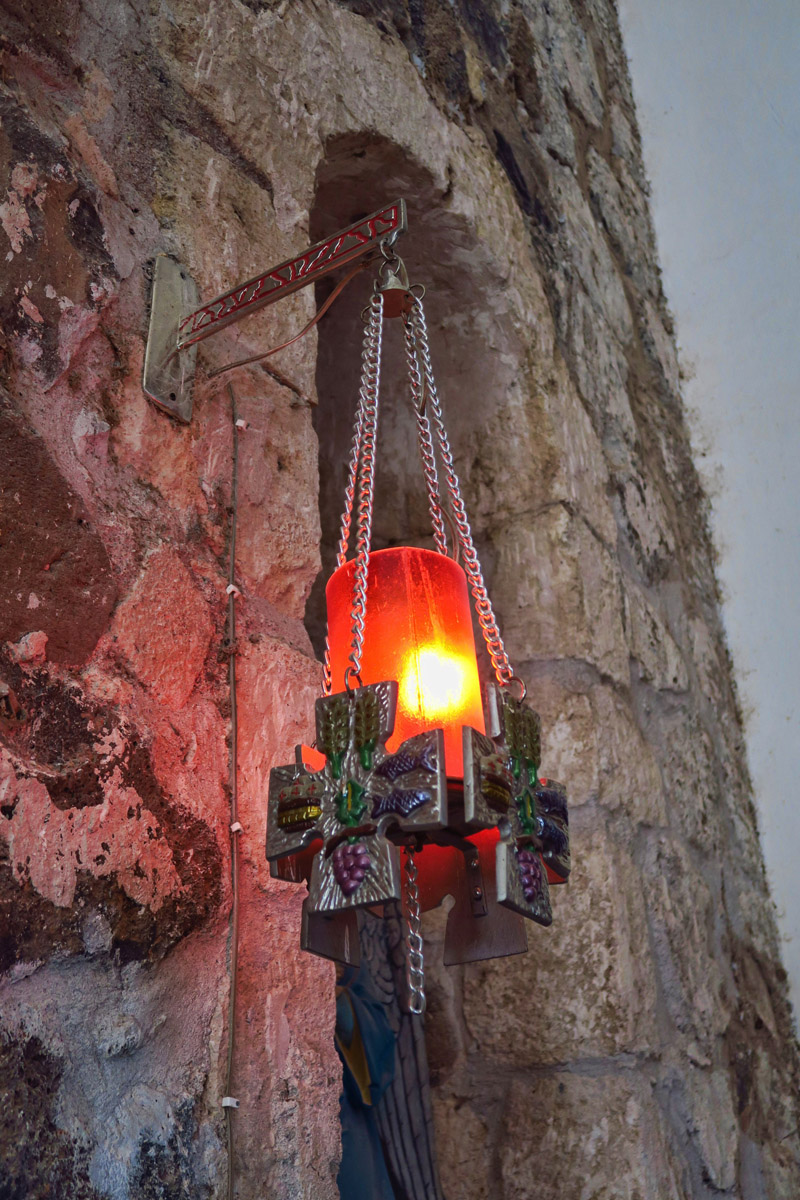 Inside the Mission, one can usually find serene solitude if you go at the right time of the day.

Last year was much warmer.  Days were spent languishing, spread out on a sarong with the warm sand beneath my back, a book in one hand and a Tecate’ in the other.  Naps were interrupted only by periodic dips to cool off in the invigorating waves.  Relaxing swims and sunny-side up floats were like spending the day at a therapeutic spa, all for the cost of a bus ticket. 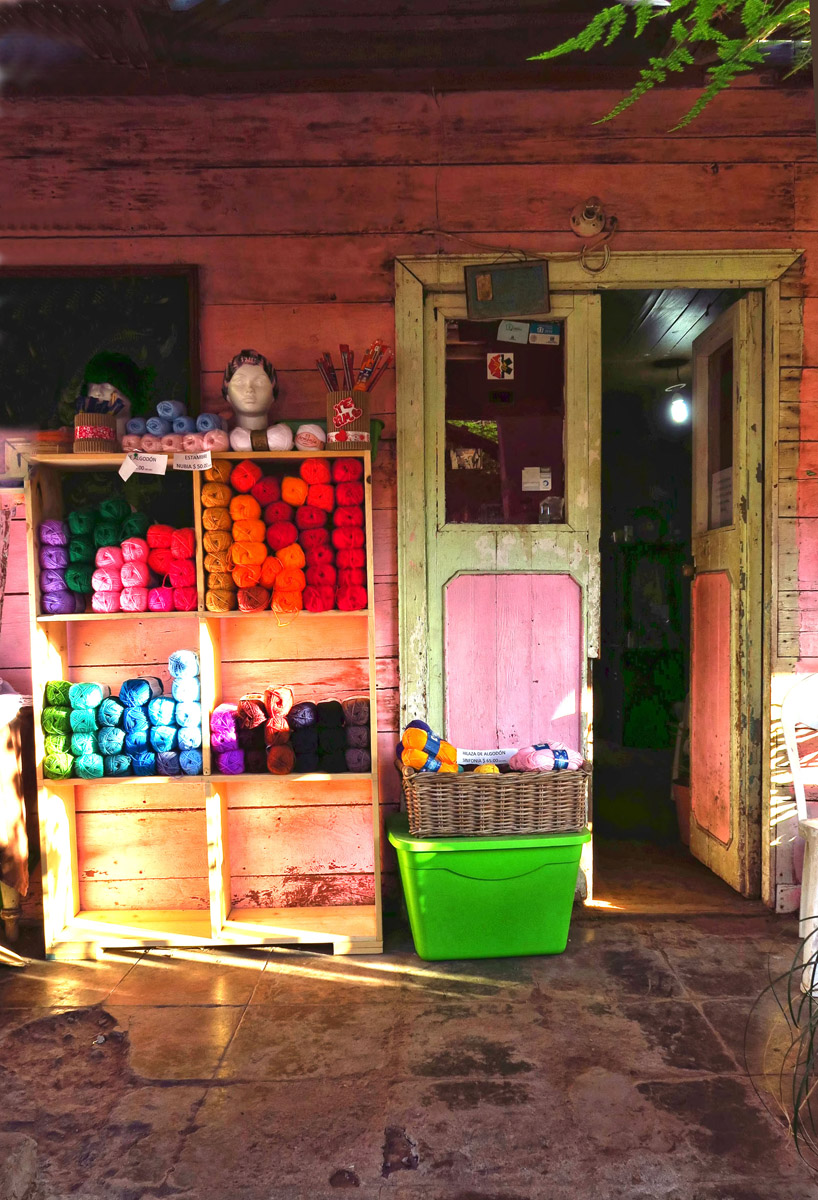 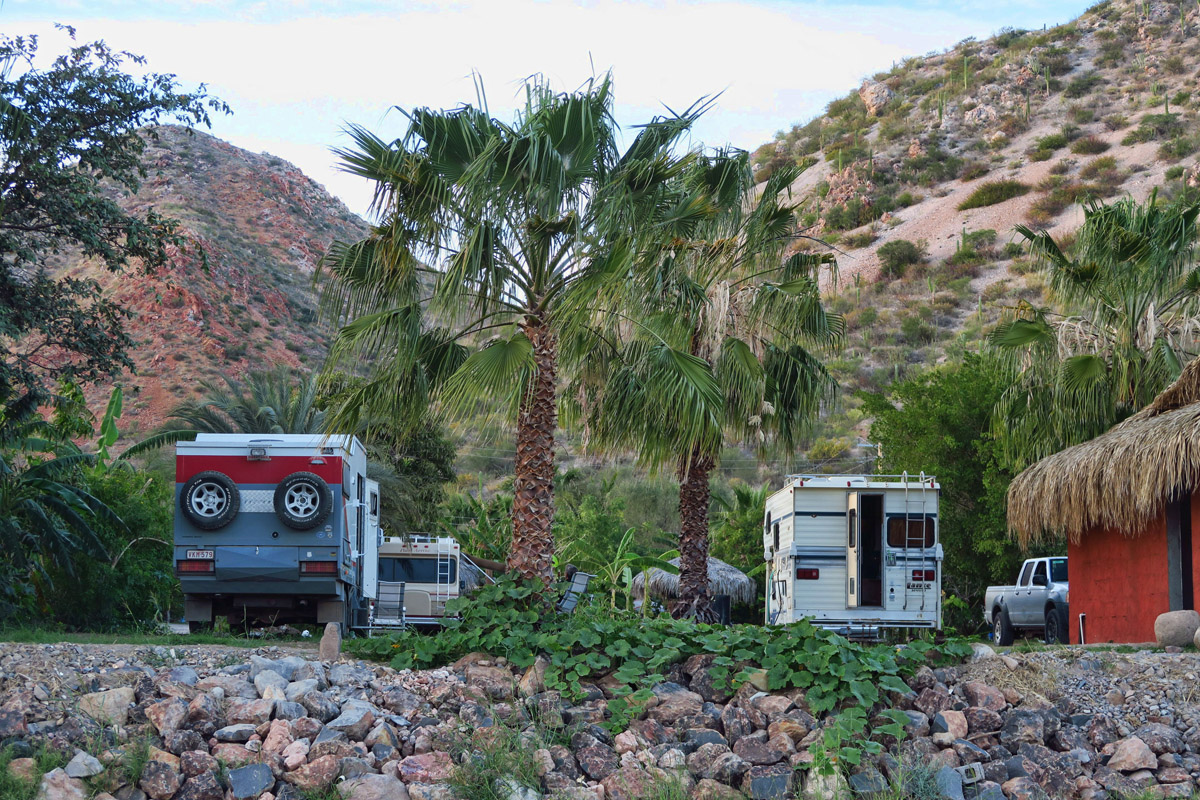 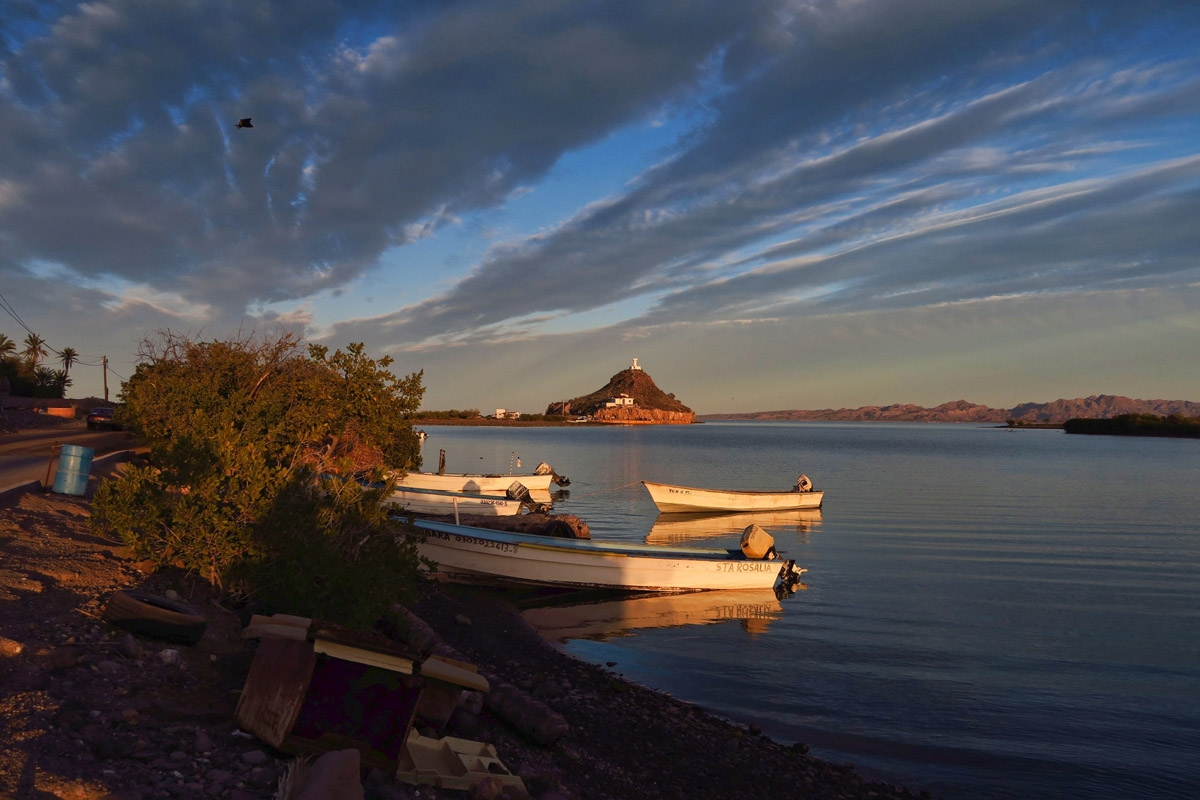 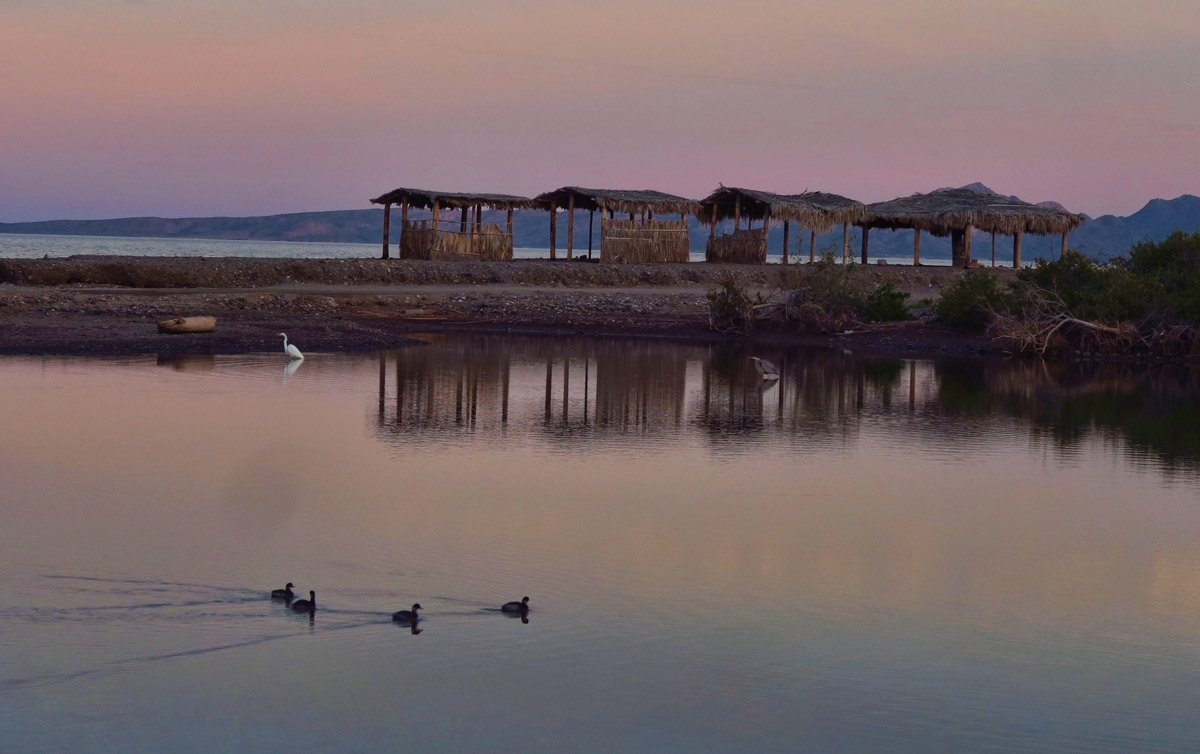 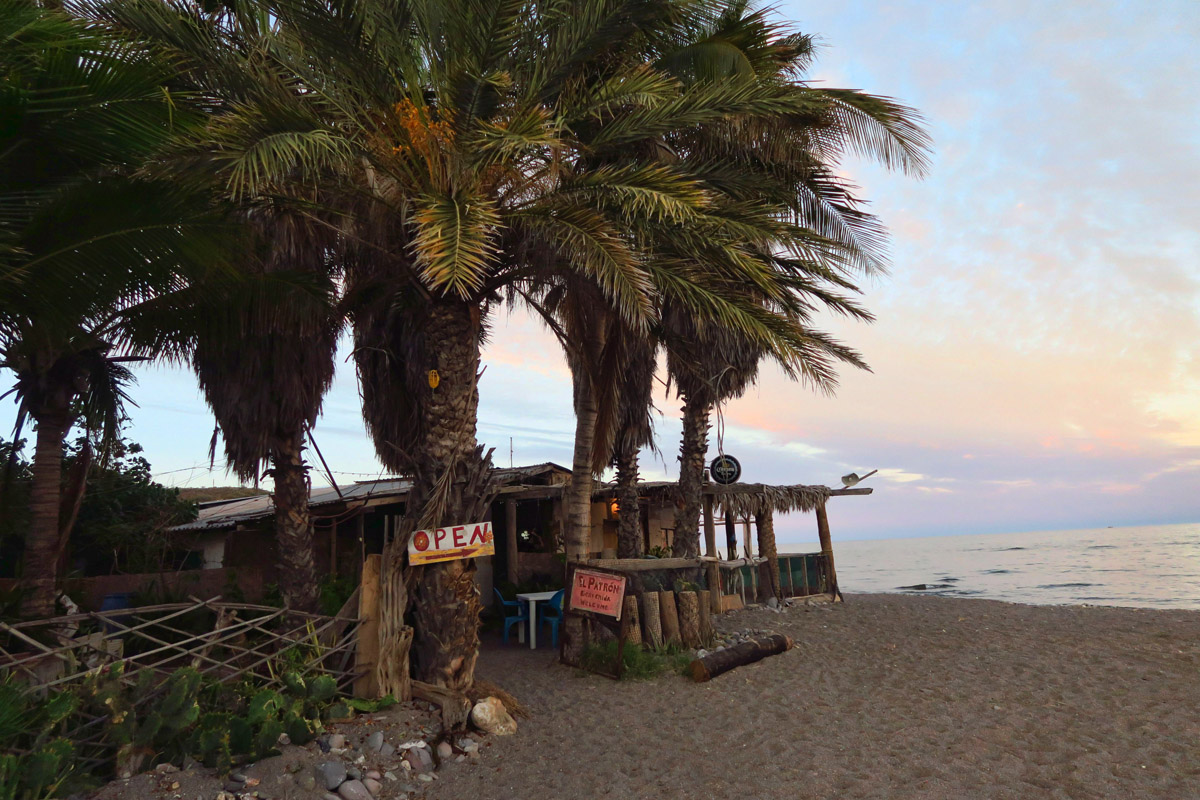 But it was considerably colder this year.  I was there a full month earlier than last year, coupled with the fact that it was an atypically cool winter.   I spent this year looking for wind breaks and dodging blowing sand, while gutting up to ease myself inch by inch into the chilly water, jumping the waves to avoid them hitting my tender midsection. 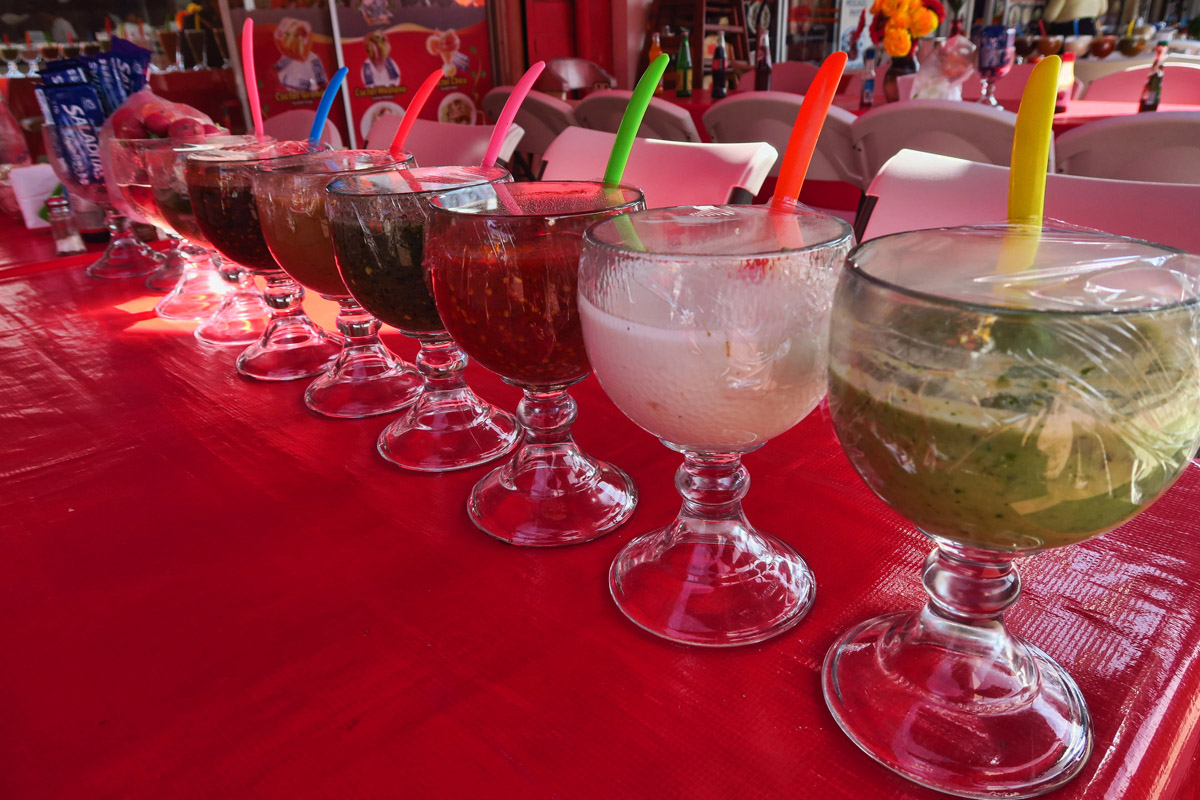 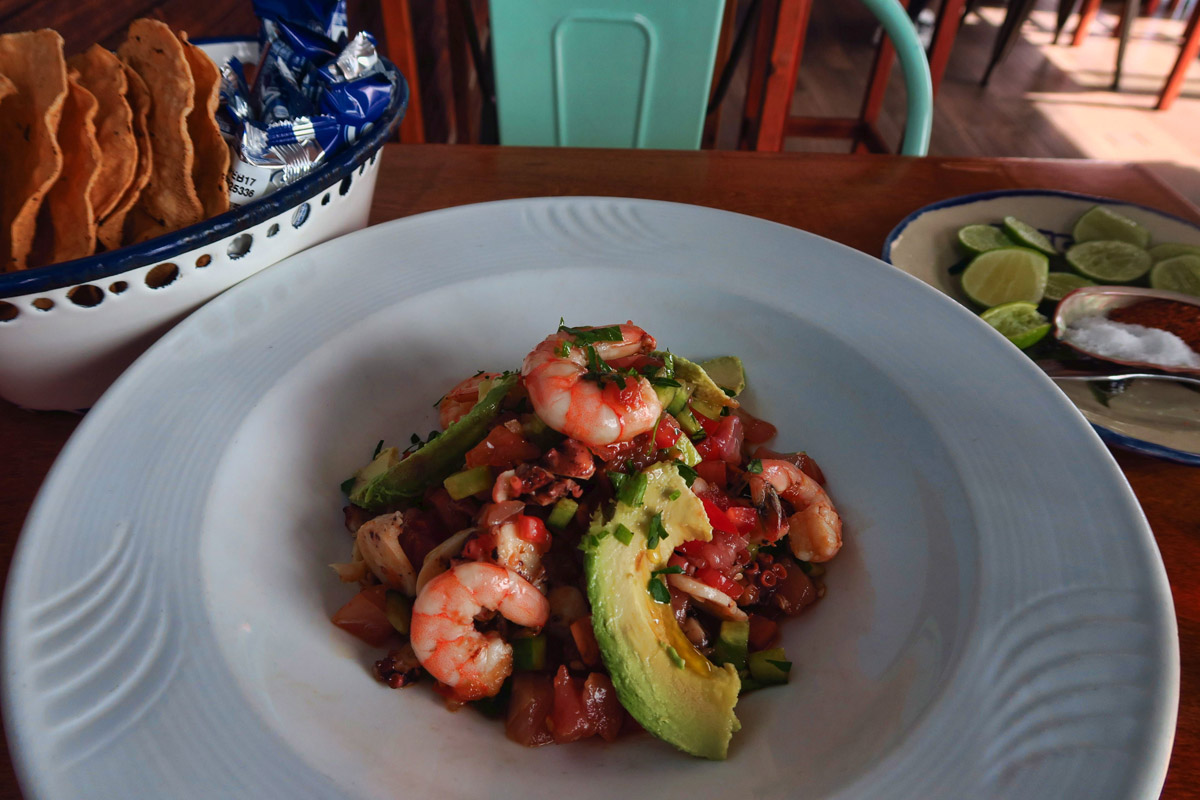 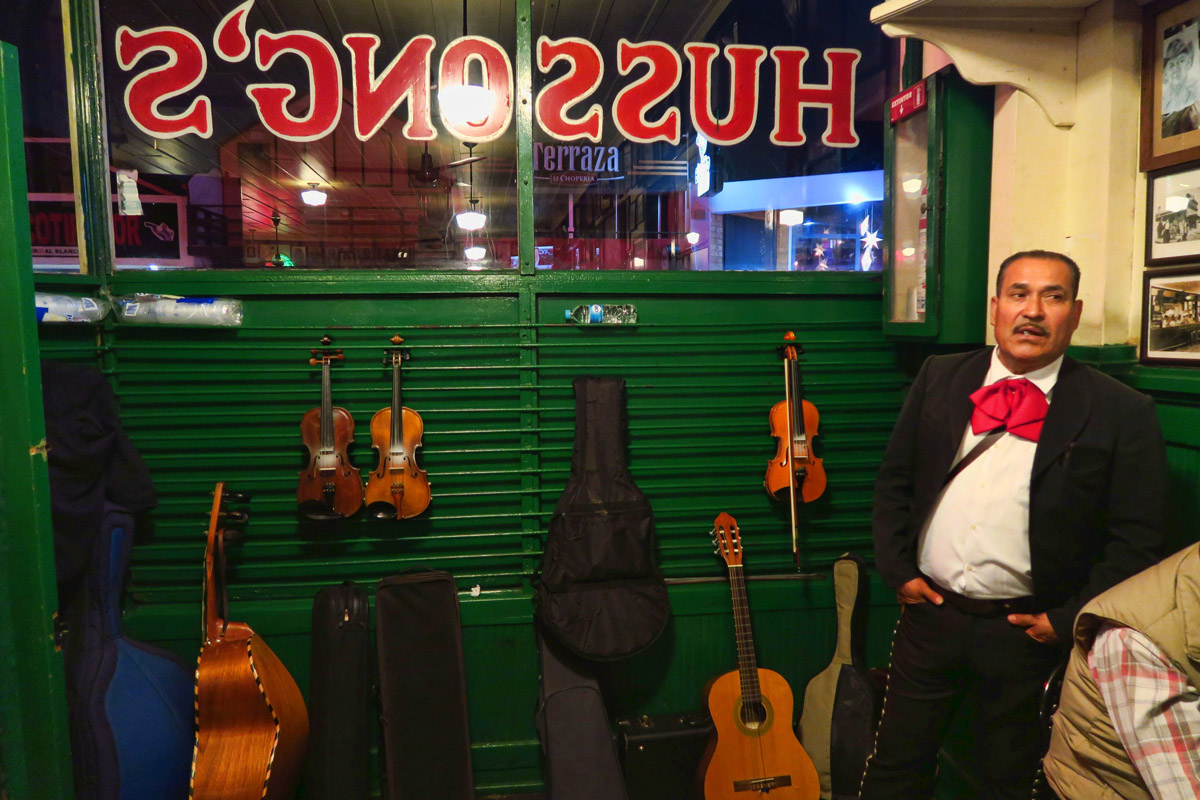 Hussongs Cantina, Ensenada, reported to be home of the margarita.

It was an interesting self-examination of what motivates me as a traveler.  Maybe if the weather had been warmer and not so windy, I could have spent day after day on the beach reading the books I’d been carrying with me for a month.  Maybe if the bus options had offered some variety outside of my same route last year, my exploratory itch would have been scratched. 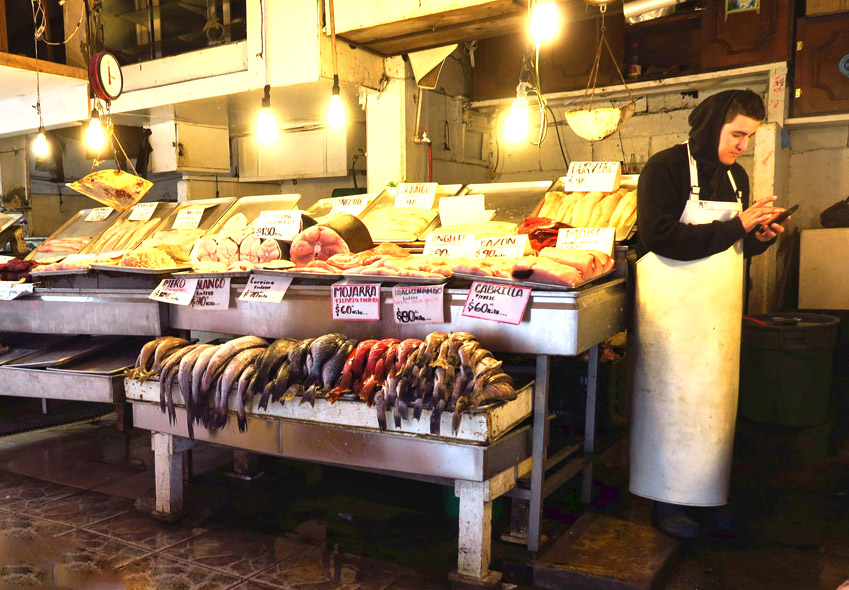 The Fish Market in Ensenada is a “don’t miss” attraction. 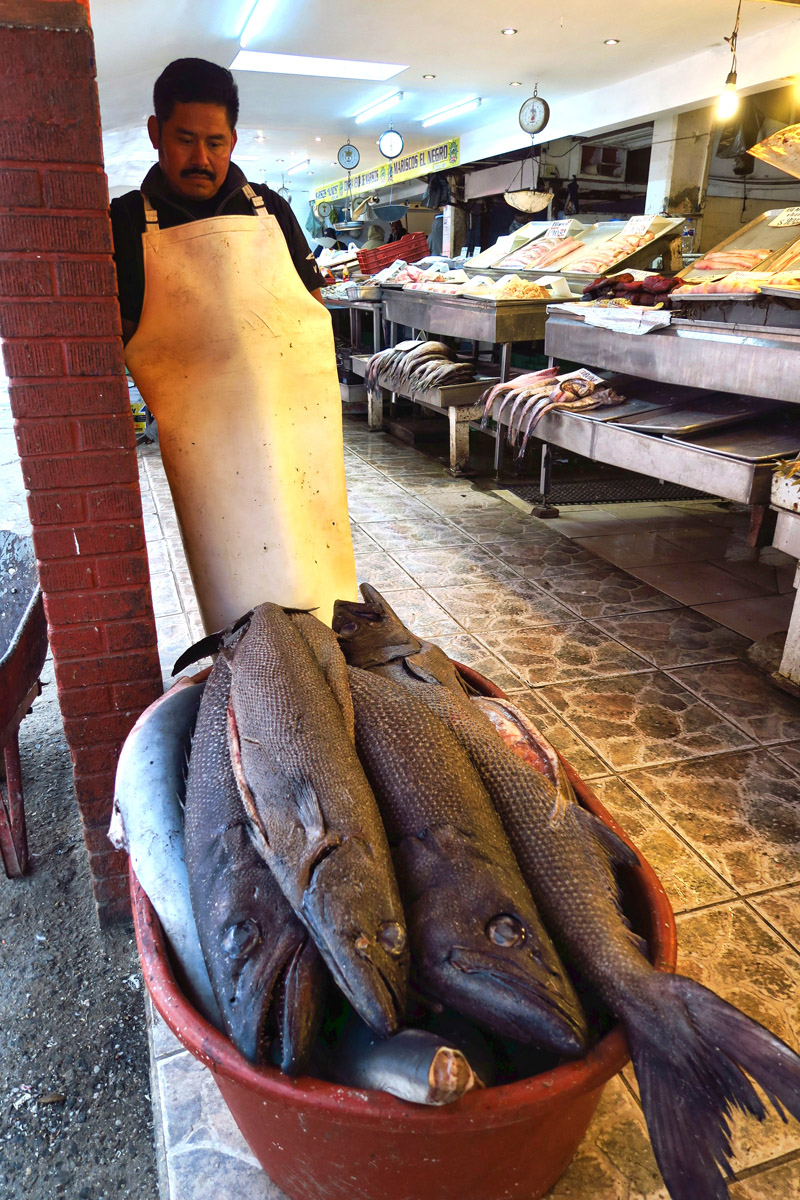 I’m not sure what these ugly fish are…maybe black sea bass? 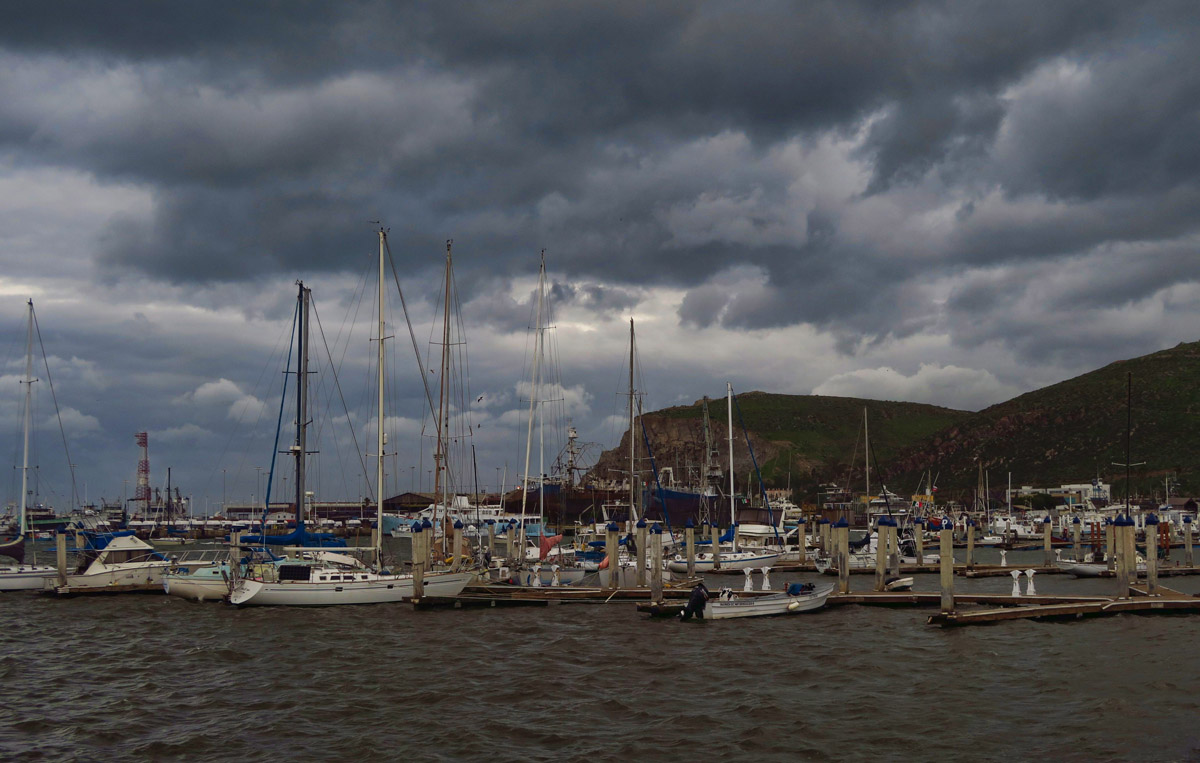 The only “bad weather day” I had in two months, when a northern blew into Ensenada. 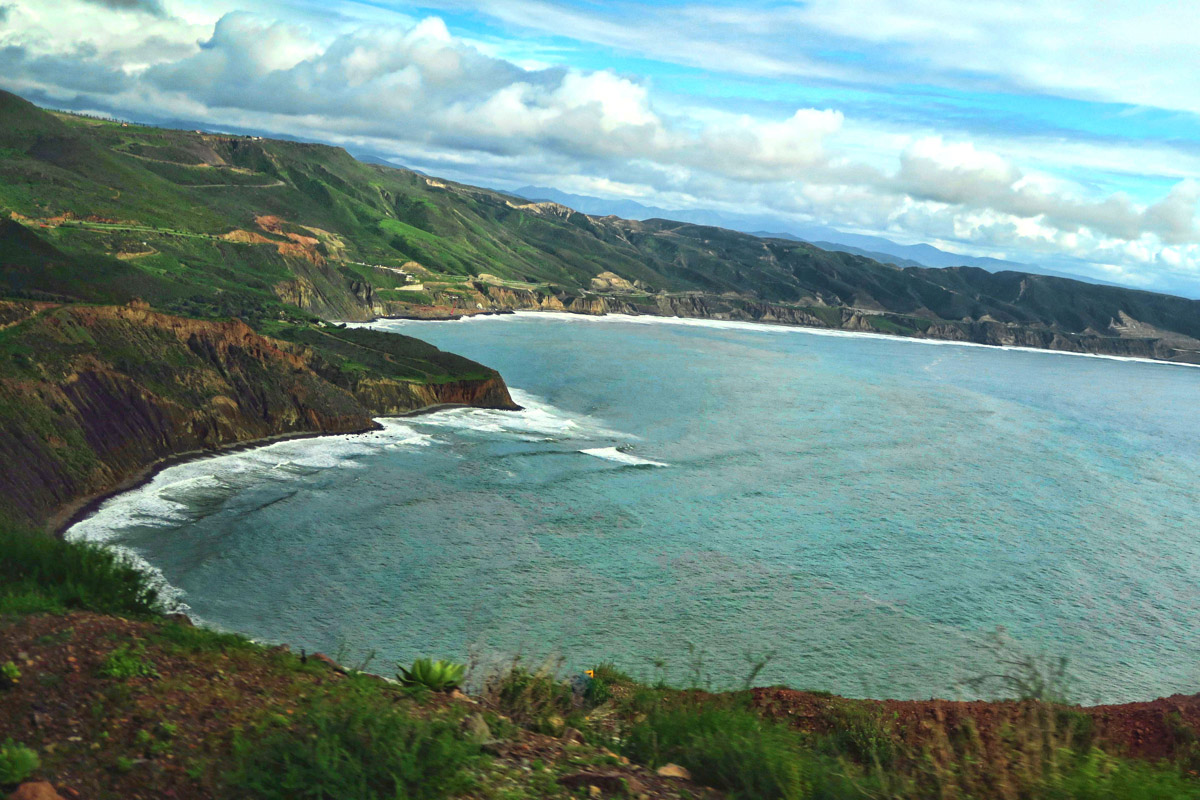 The highway from Ensenada to Tijuana.

But I found I missed the color and culture of mainland Mexico.  I missed the challenges of navigating my way through menus in Spanish, ATM machines offering only Pesos, and those “assault on the senses” mercados selling pig snouts to chicken feet and everything in between.   The extensive, easy and affordable bus systems that lead out in any direction.  The beautiful old architecture of the historical colonial towns.  The lively plazas filled with music and people meandering, dancing, and visiting each evening.  Not that I mind a little “Californication,” but let’s face it, Baja is more like “Mexico Lite.”

I maintain my vow to return to the Sea of Cortez one day under sail.  But as for “Baja by Bus,” after two winters in a row, I think I’ve “been there, done that”…at least for a couple more winters… 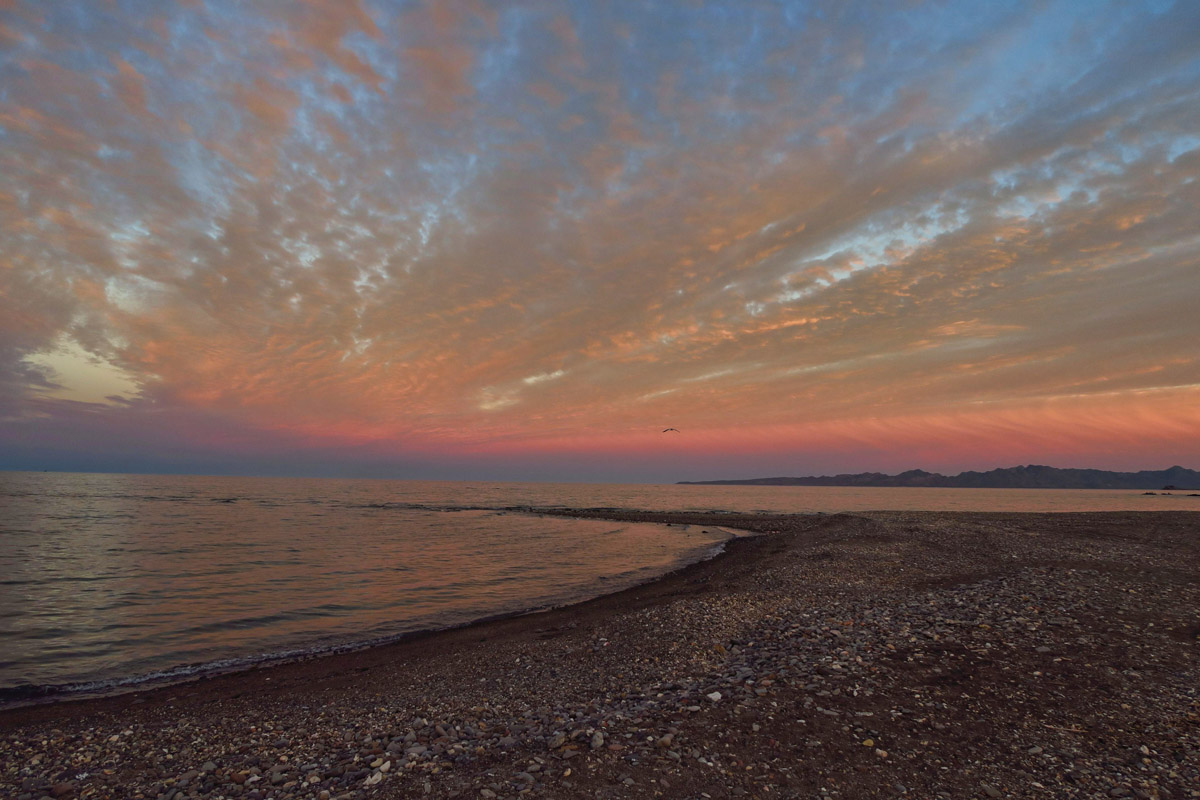 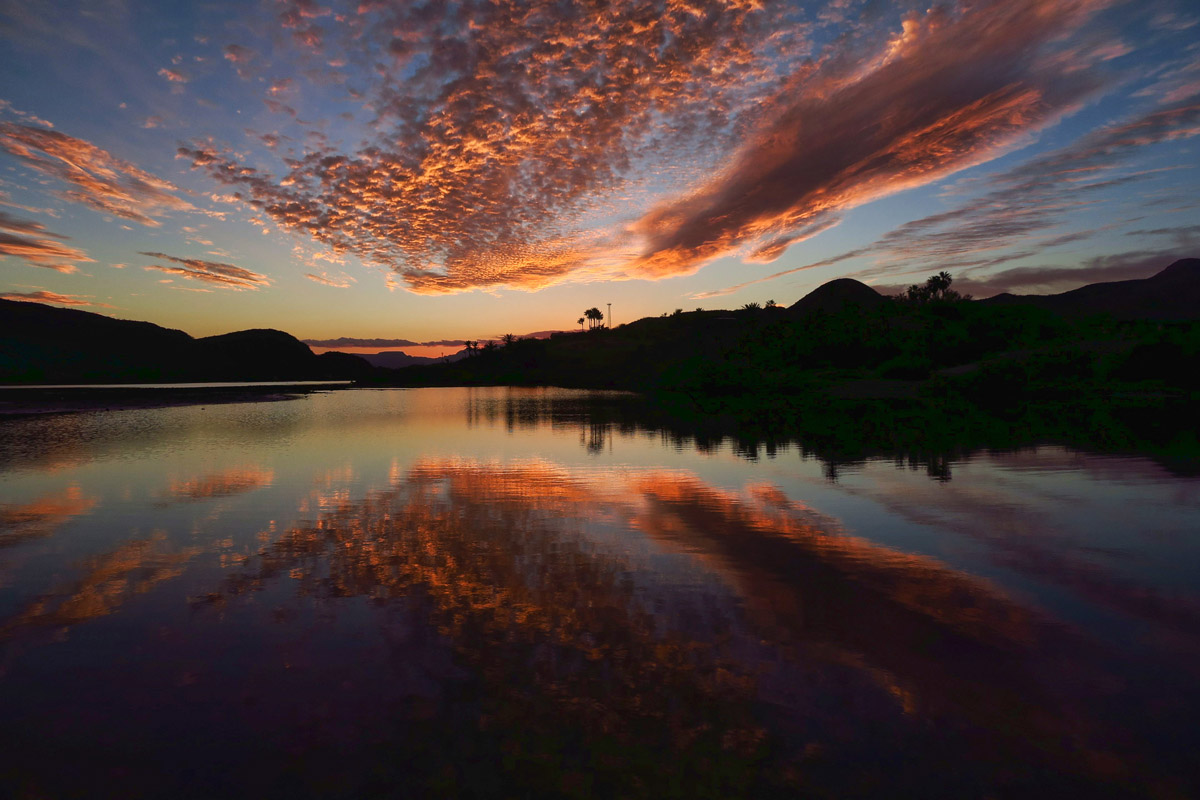