The festivities progress over the weekend with Palm Sunday the finale for the first week, then continue on into the following week.  But unlike San Miguel de Allende which is a heavily touristed area, there are no billboards or English-print newspapers with the Semana Santa schedule published.   News of activities gets communicated via a Meet-up site, but one must be vigilant about monitoring the site.  Even then, events are described in Spanish (go figure!) and therefore not always easy to weigh the relevance of the attraction. 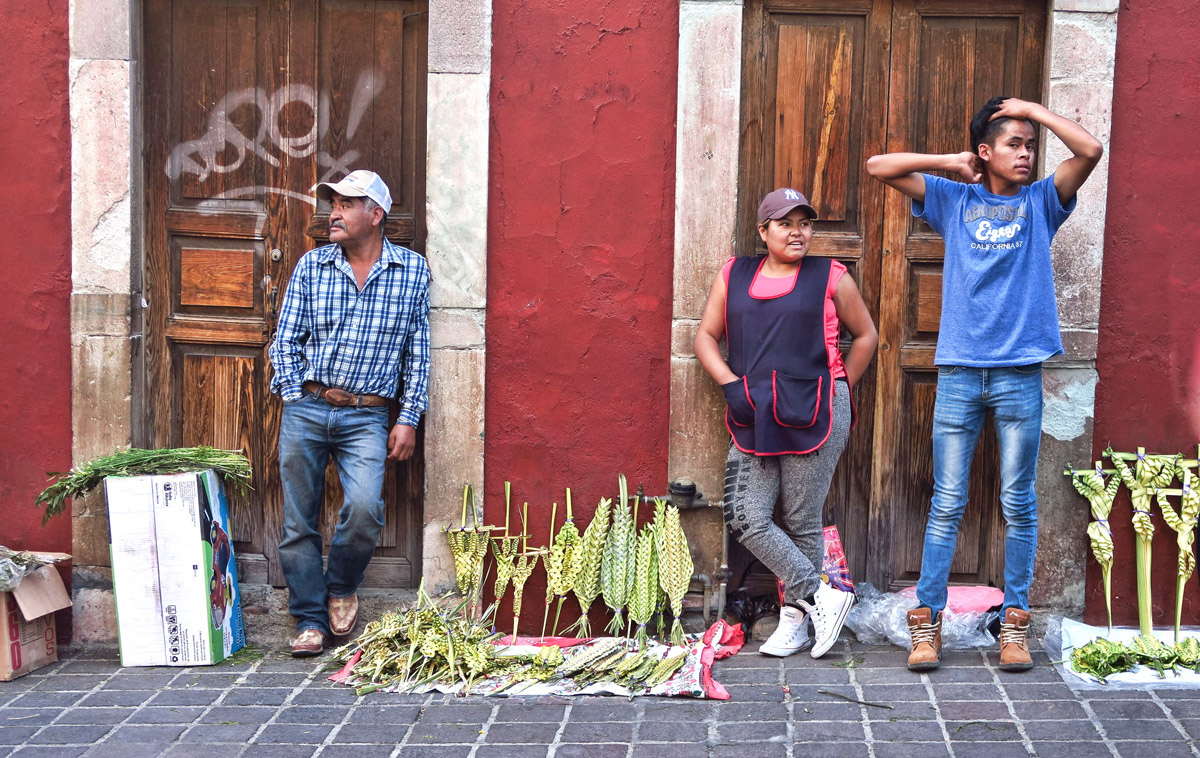 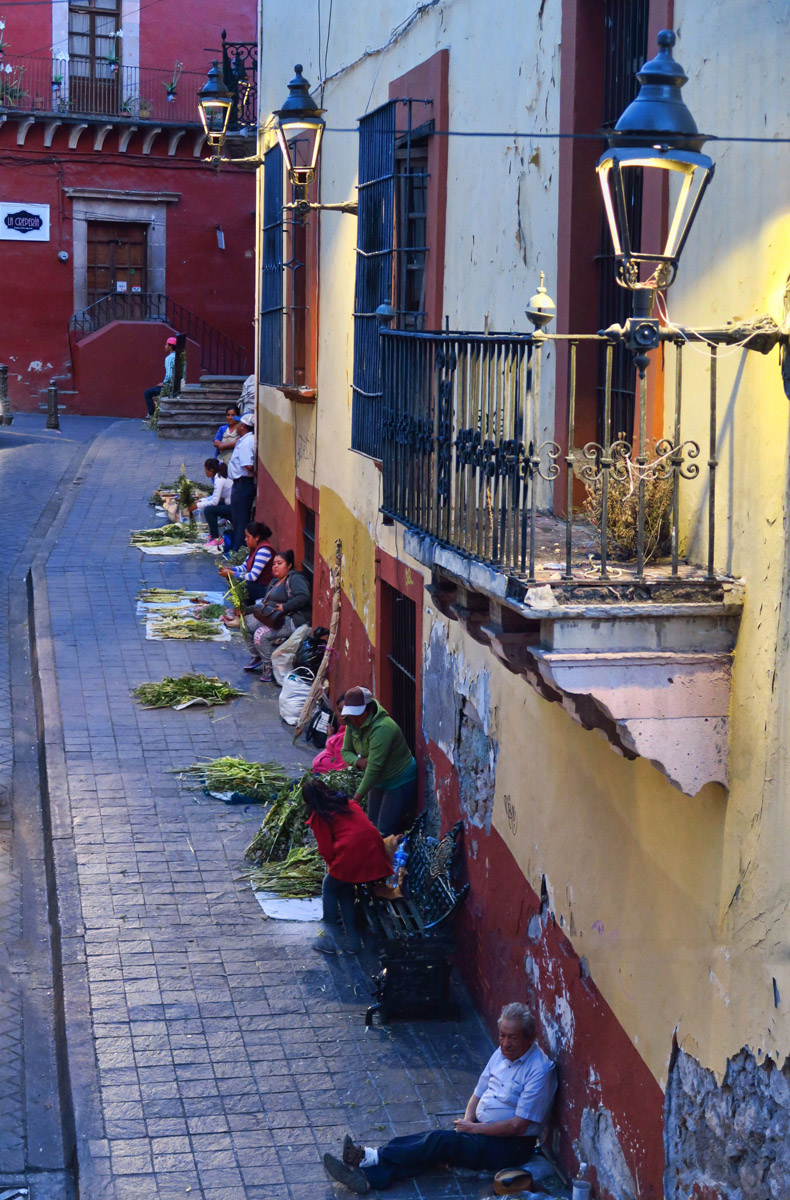 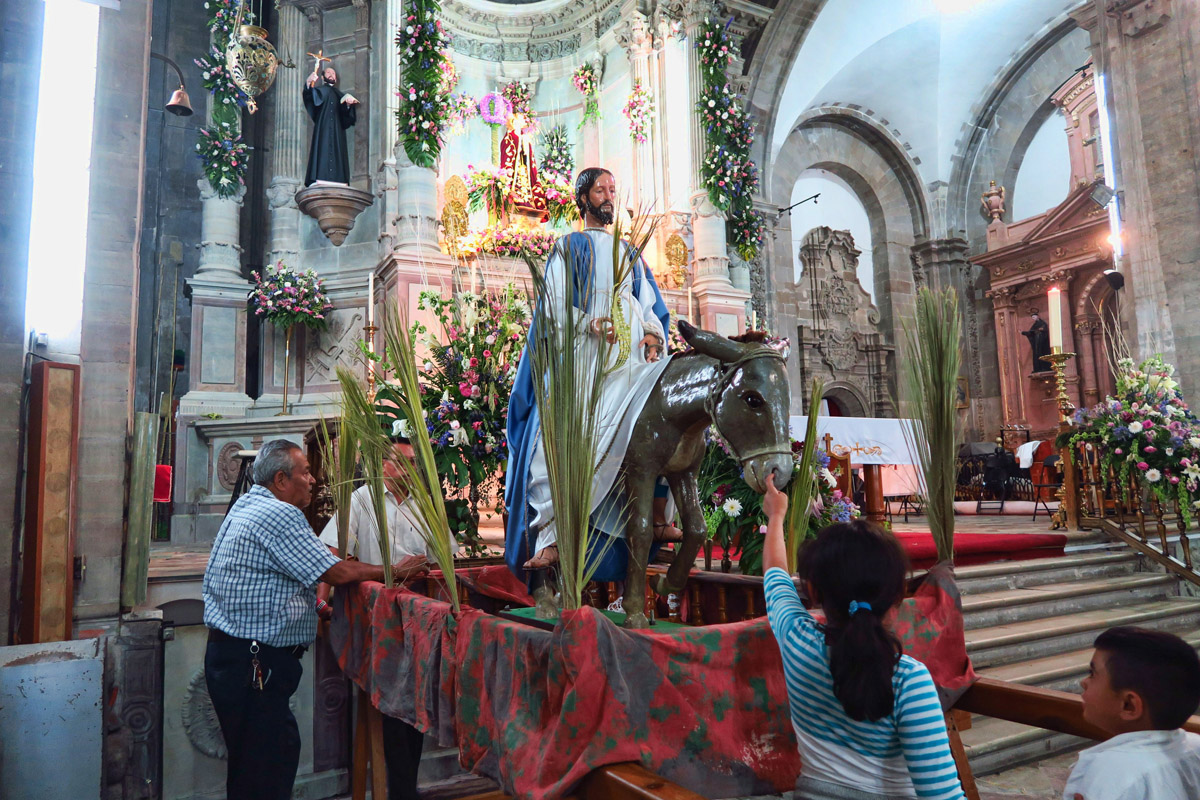 Jesus has “ridden into Jerusalem on a donkey” (into the church carried on on a platform on shoulders of four men.) Gotta laugh at the young girl checking out the nostril of the donkey! 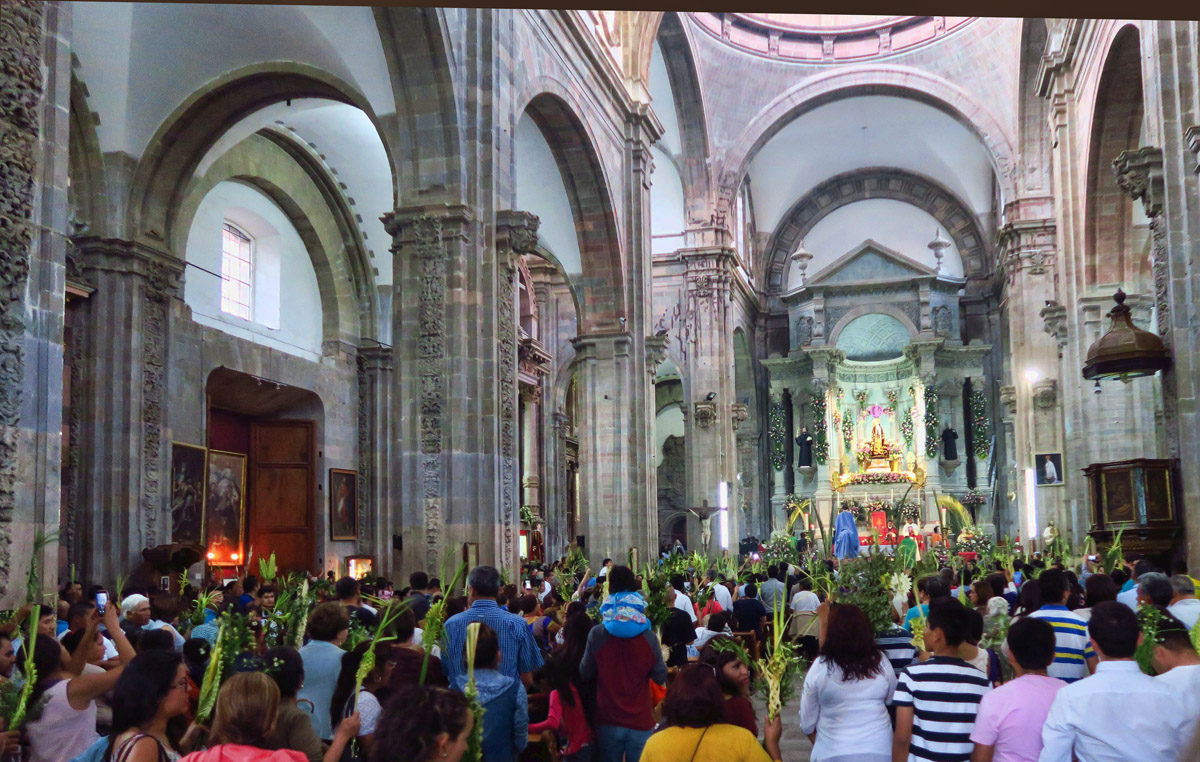 Parishioners all wave palm fronds for most of the service. 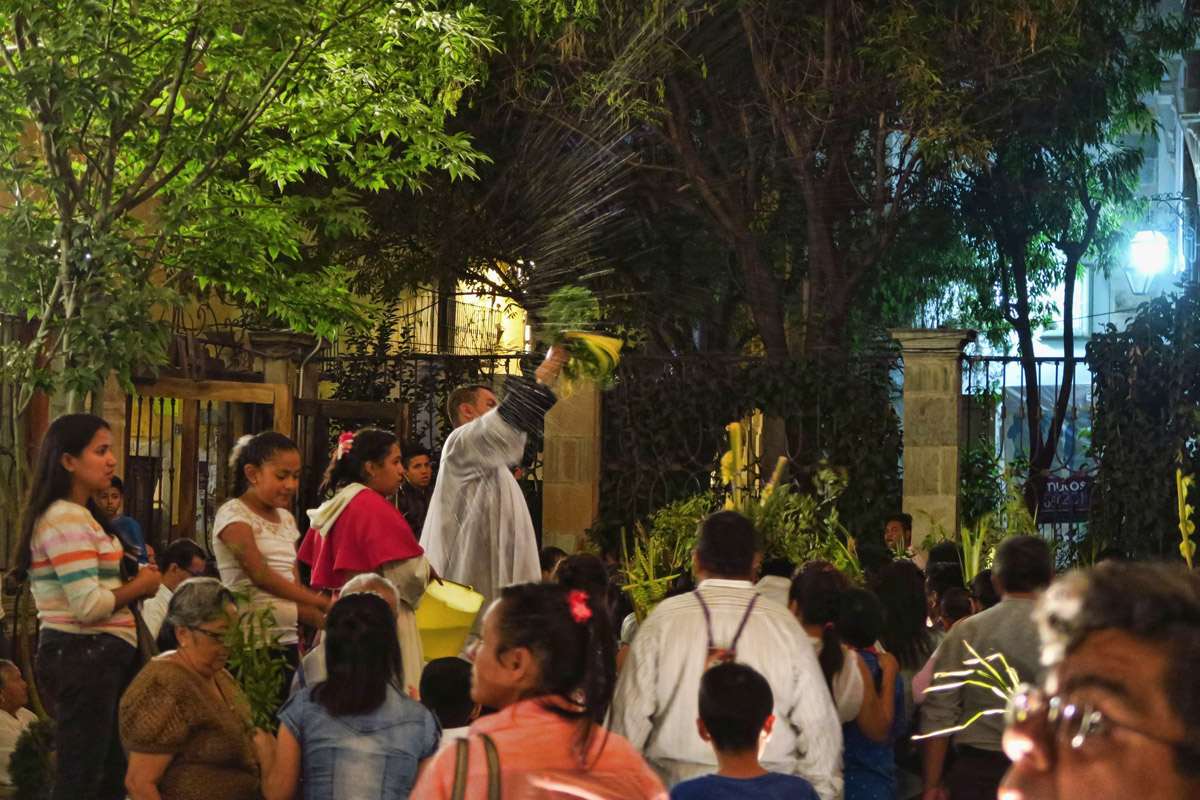 After the Palm Sunday mass, the Priest exits first, then sprinkles the masses with Holy Water as they exit the church. 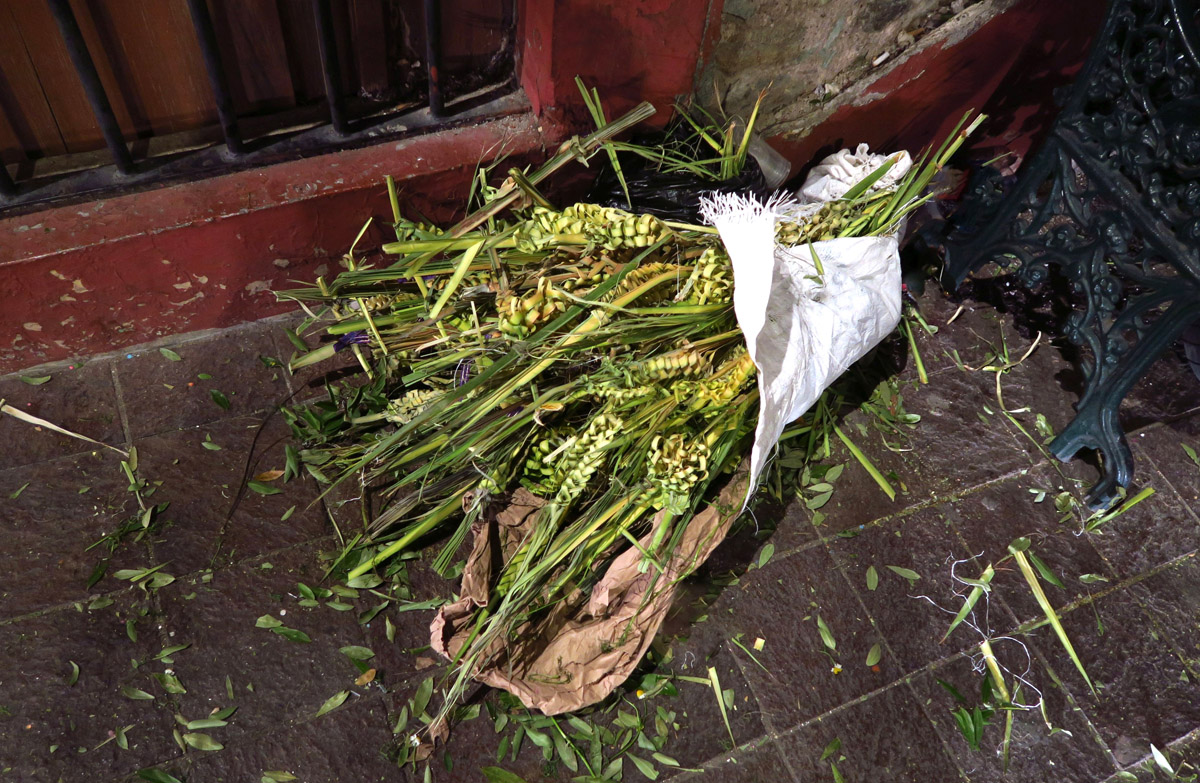 The market for palm fronds has a short sales cycle. Once service is over, they can be had for free…

Often times, news spreads by word of mouth from friends, landlords, classmates.  Other times, it comes about by following a set of clues.  In Mexico, this typically starts with an abundance of flowers being carried by the women and children.   Or it might be a particular food or toy that begins to appear with some frequency as I encounter people along the street.   There is an inexplicable “something” in the air that lends itself to the hint of celebration.

In the case of “Holy Thursday,” or “Maundy Thursday” as it is known in the States, news comes from newly acquired friend Peggy.  As we both hurry off in our separate directions, she shouts back at me, “Don’t forget, it’s the day to visit seven churches!”  Huh???  Another Catholic tradition with which I am unfamiliar.   I call back to her, “What’s that about?”  She’s off to meet a friend for lunch, but quickly reiterates the local tradition is to visit seven churches on Holy Thursday. But I am left not only wondering why, but also whether I can even locate seven churches within the walking radius of the small Historico Centro of Guanajuato. 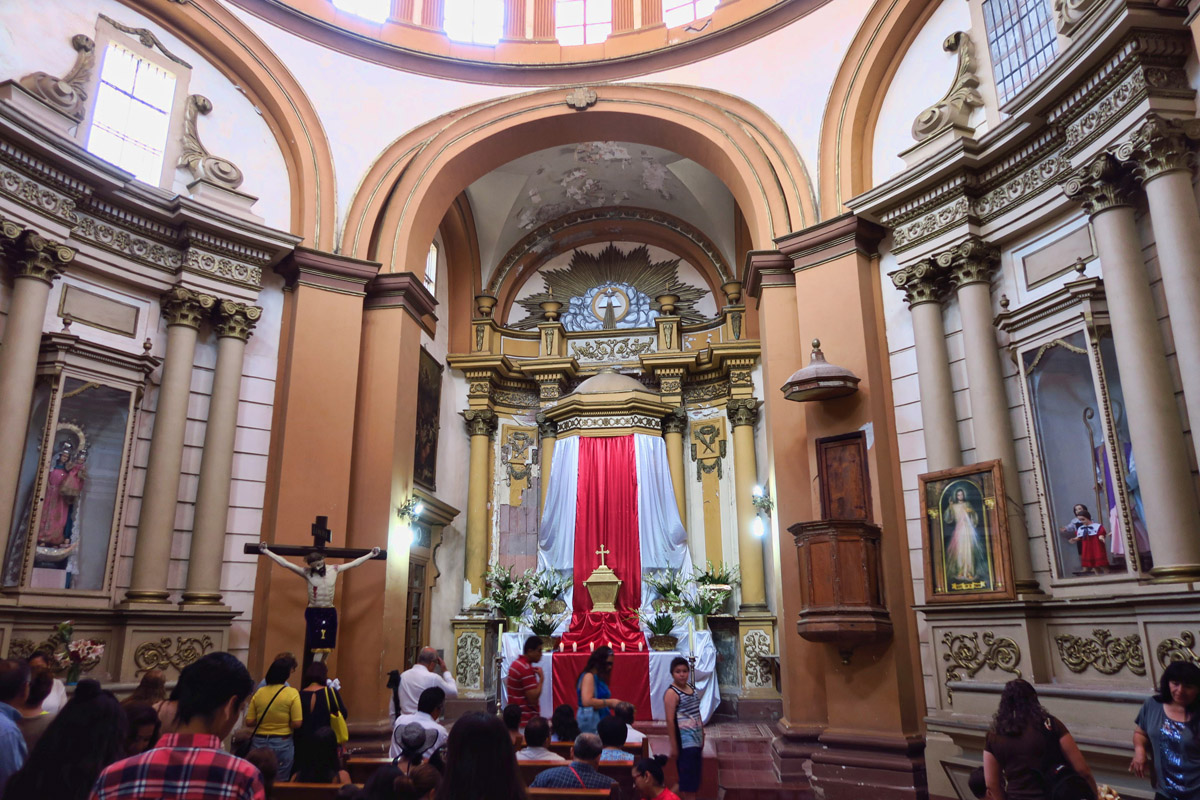 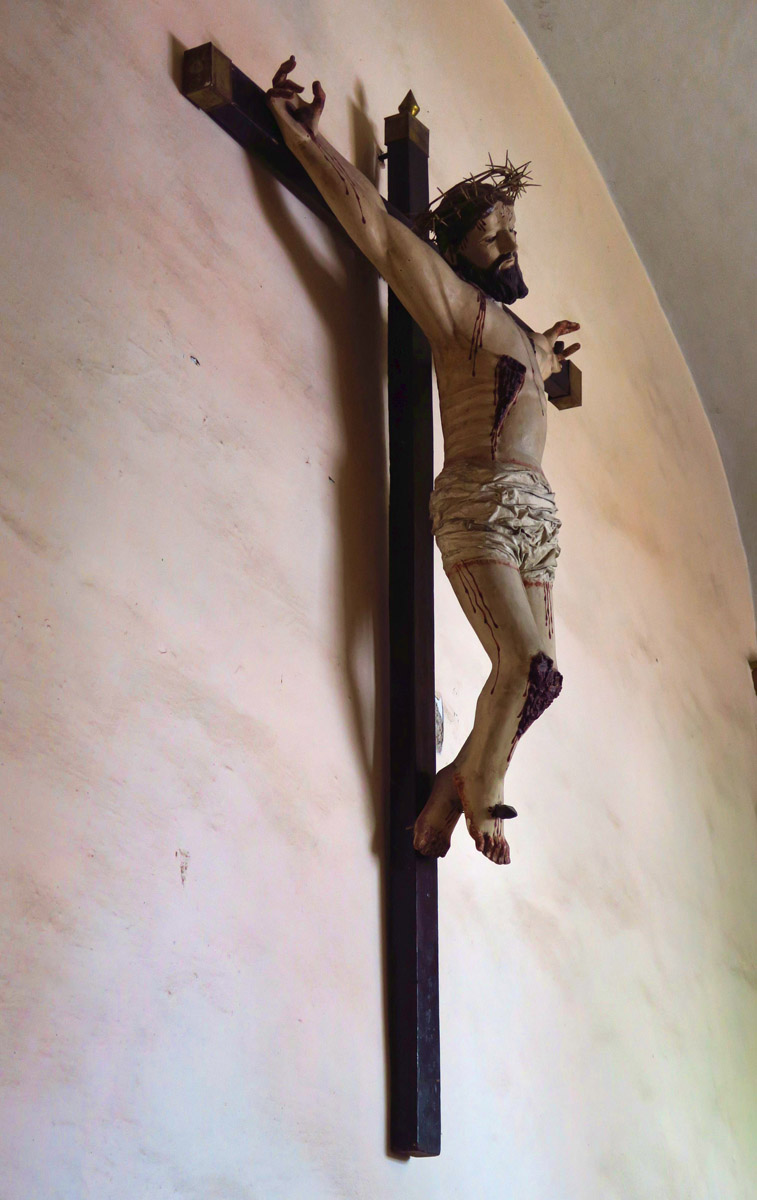 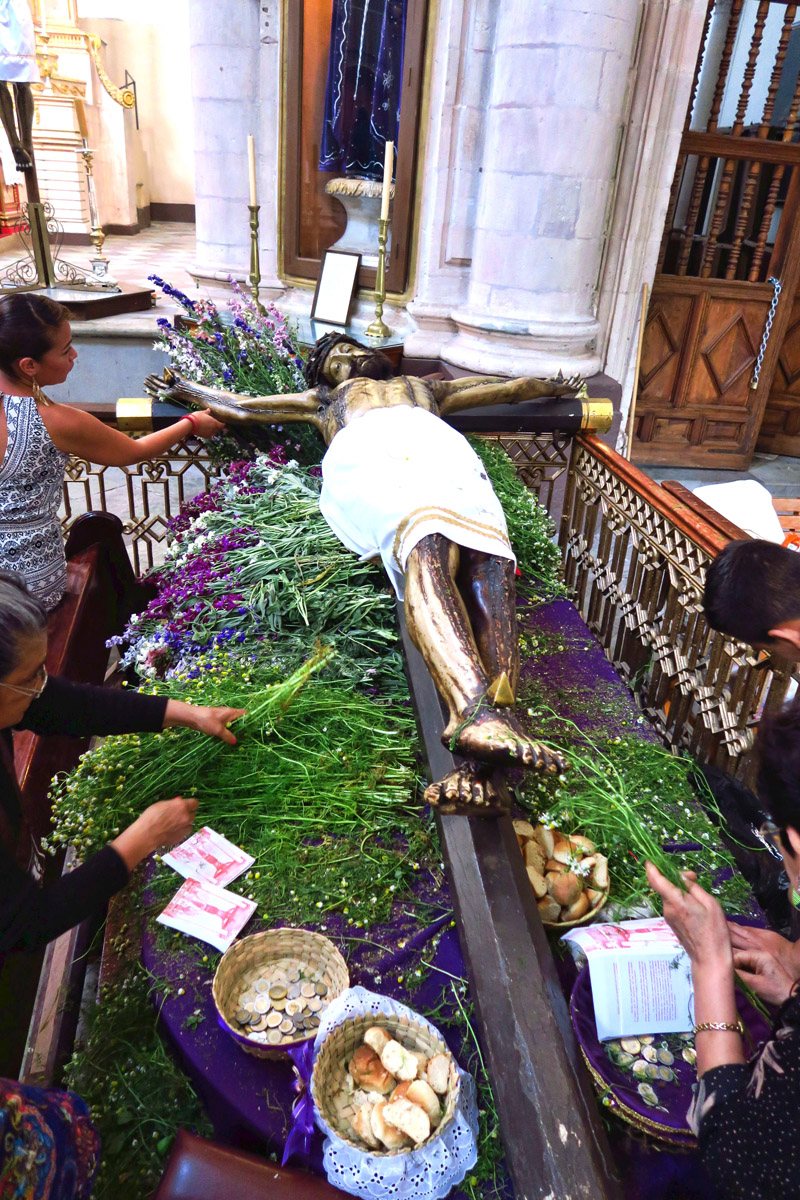 Holy Week offers the devout a rare chance to touch many of these images of the Christ. 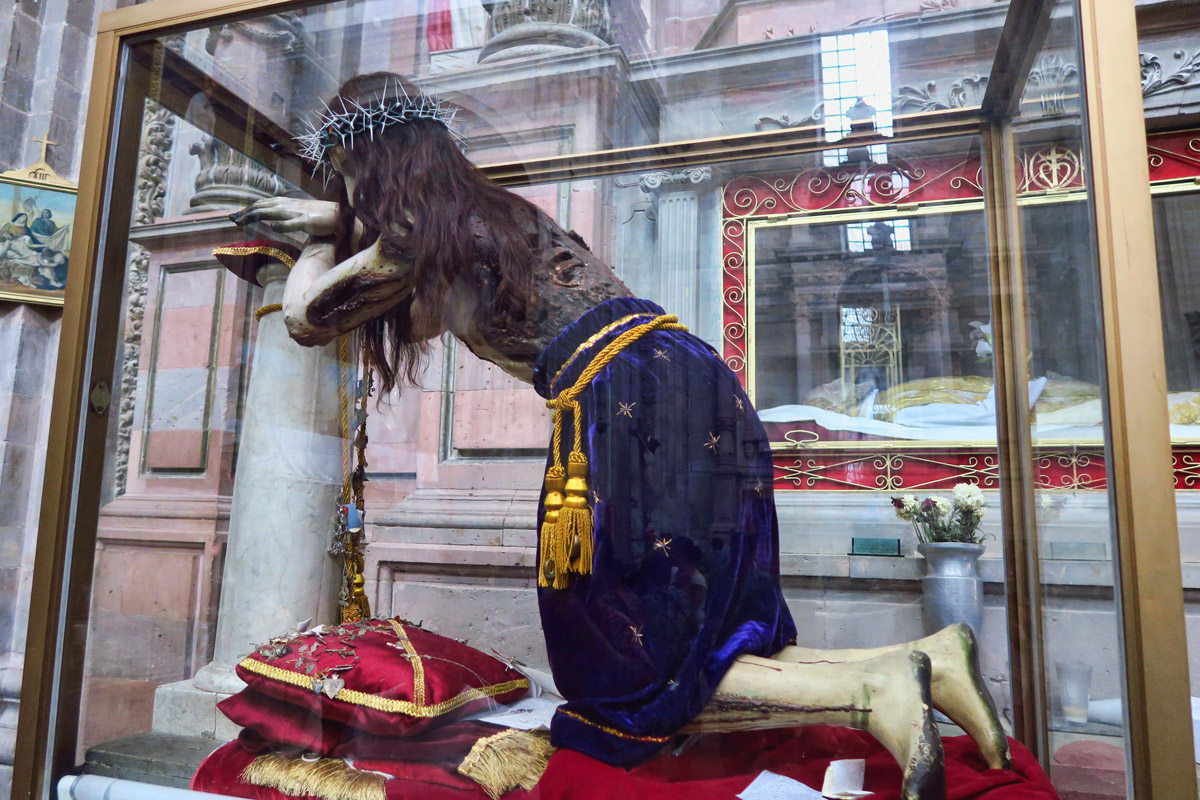 This particular version has some pretty gruesome depictions in the form of “exposed ribs.”

Soon along my commute across town, I am seeing signs of the ritual.  Women and young children are all carrying bunches of tiny daisy-like delicate white and yellow flowers  gripped in their hands.  Street food vendors have appeared on corners that were previously vacant.    Massive wooden doors at the center of church buildings that are typically closed like a fortress are now open, and people are waiting in line to enter.   There are handmade signs directing foot traffic to enter in one door and out the other, as people file past the statue of the crucifix as if it were a recently deceased dignitary lying in state. 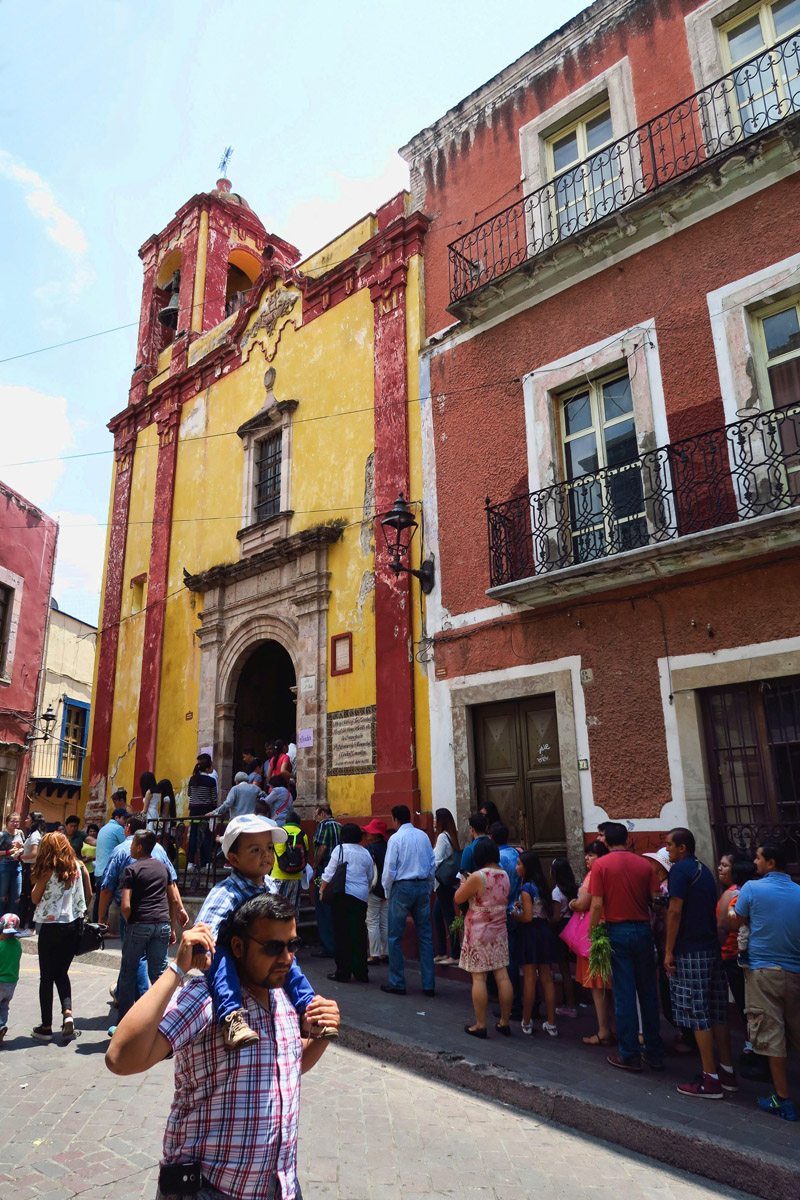 Line to enter one of the smaller churches. 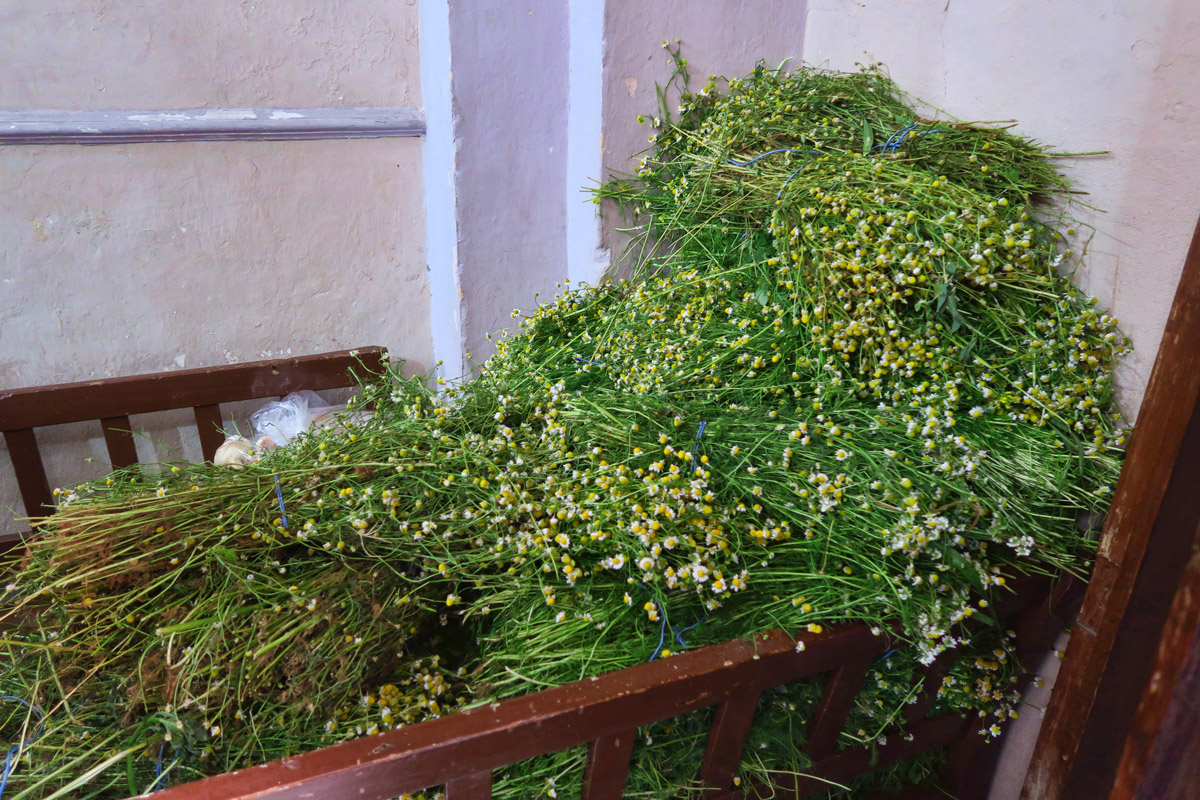 Bundles of chamomile, or “manzanilla” in Spanish. 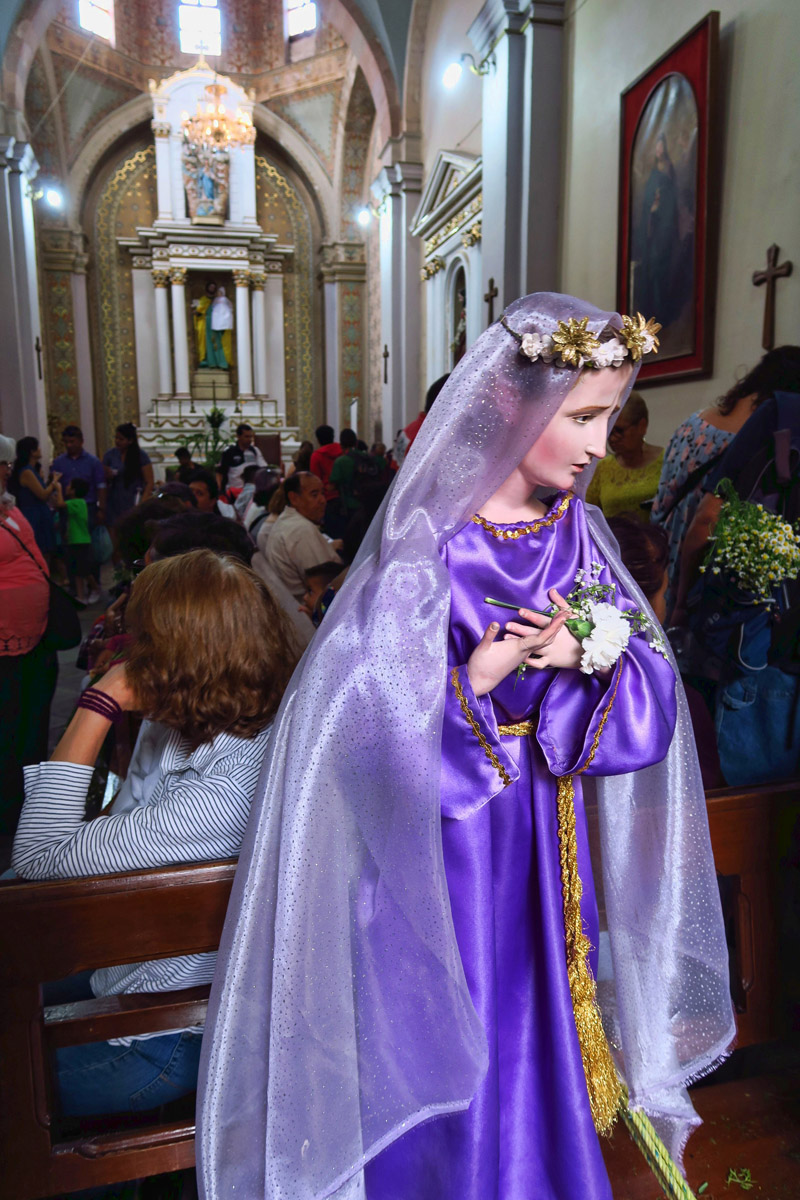 As a person who professes to be “non-religious,” I’m still not sure why I feel compelled to participate in this tradition. Maybe it’s the gauntlet of locating seven churches as if it were some kind of traveler’s scavenger hunt. But as I pass the small church on my way home, curiosity gets the better of me.  I can’t resist the urge to join the line of the devout queuing up, to see what all the fuss is about.  Then another and another.

There is lots of symbolism going on inside each of the churches.  Tables in all corners offer small bread rolls the size of golf balls…”pan” in baskets.  There are hand-knitted lanyards of white and purple yarn.  Small glasses of water are being dispensed.   And tiny clay pots filled with rice.  Each of these items has some significance to the line of solemn devotees on either side of me as they make their offerings and carefully select their items of choice. But I have no idea what they all mean.   I am the epitome of “which of these is not like the other?” 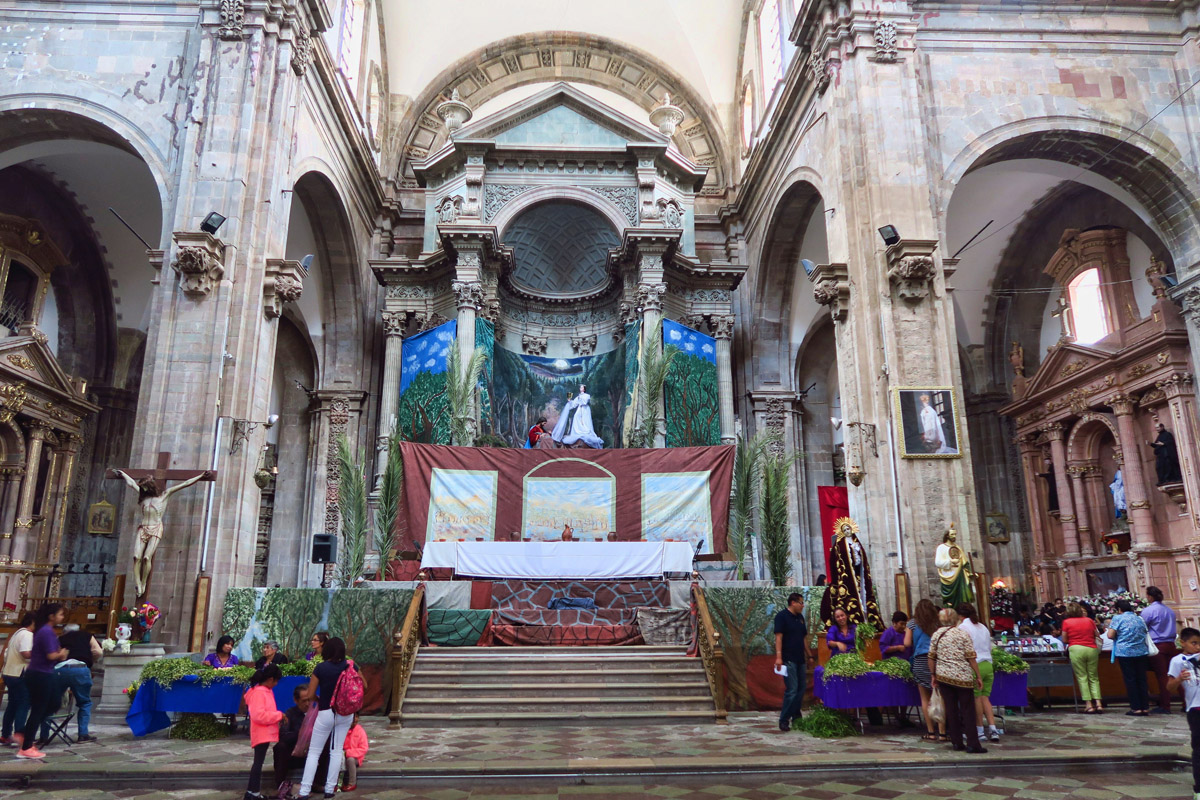 The larger church, has stations from the Passion Play set up all around the perimeter of the church. The main altar has been converted to a stage to act out the washing of the feet, and the Last Supper. 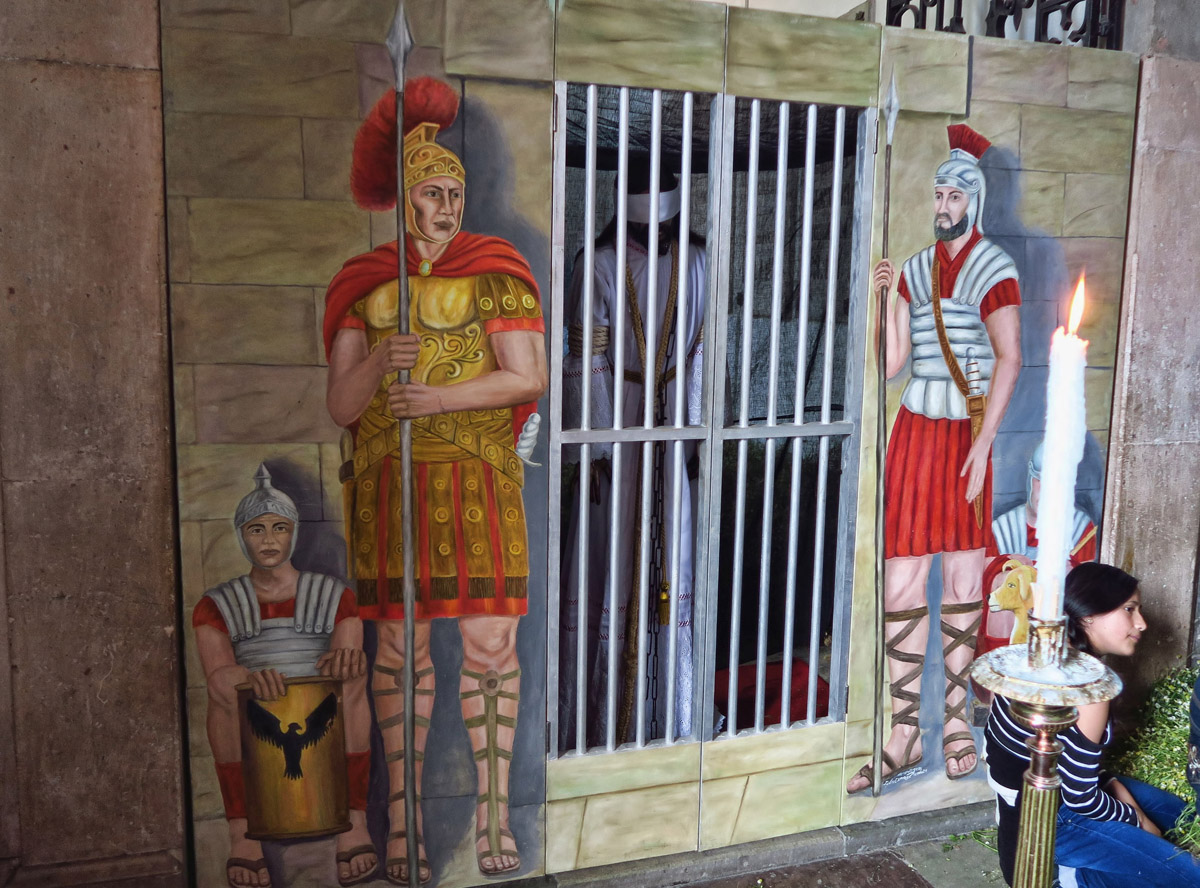 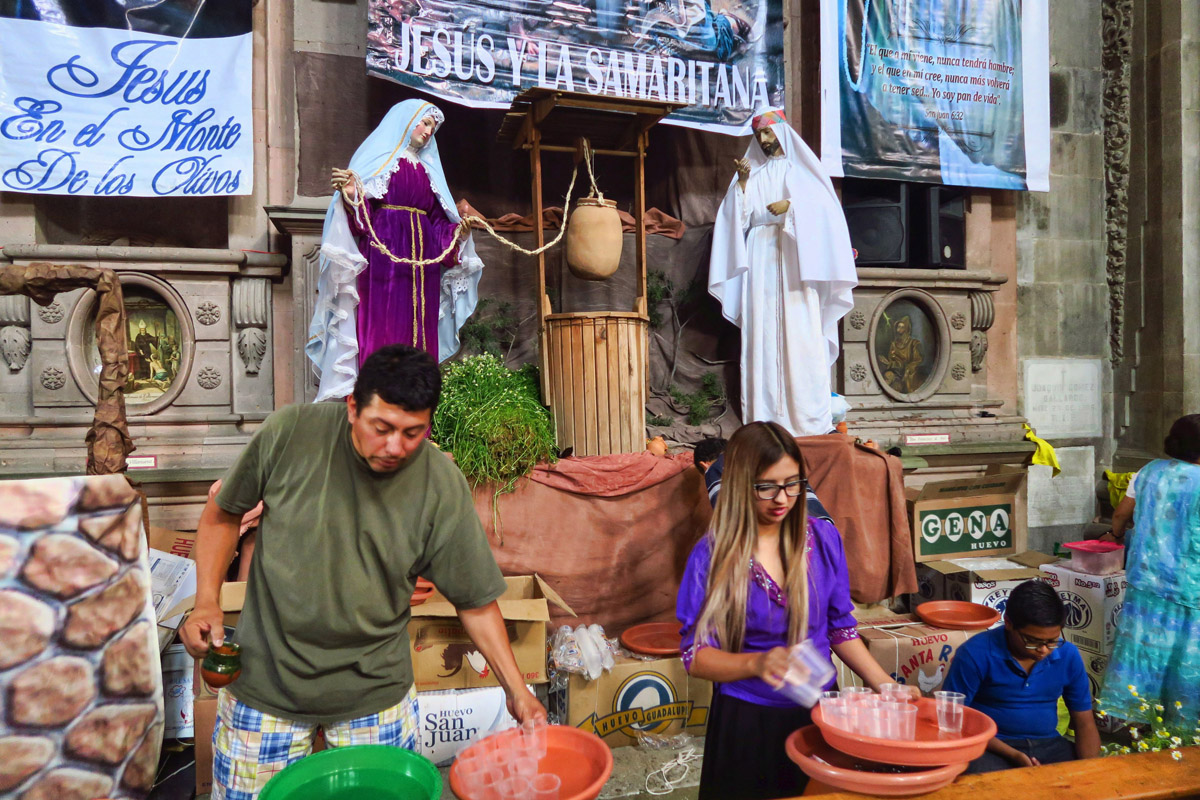 This station is about the “Samaritan woman at the well,” ergo the small cups of water being handed out. (Wish they would use paper cups, not plastic!) 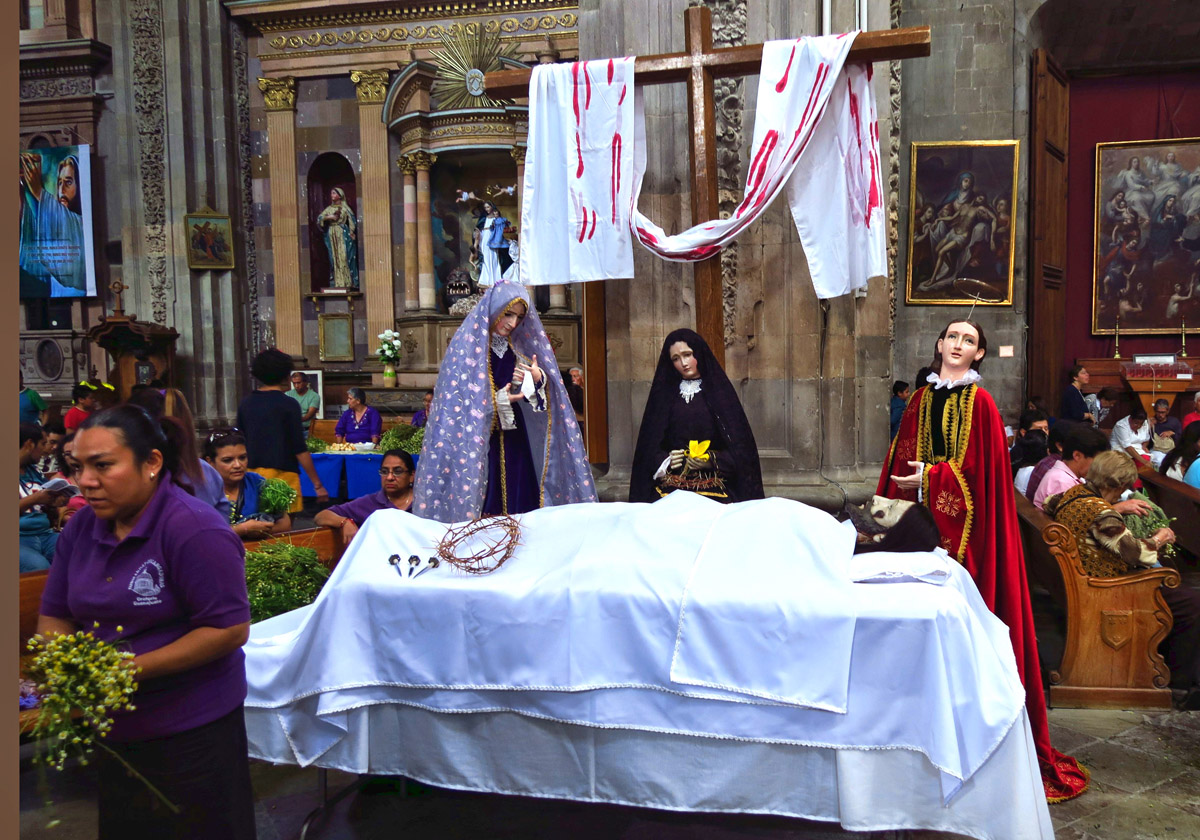 This station is obviously depicting the body being prepared for burial. (Note the nails at the foot of the bed.) 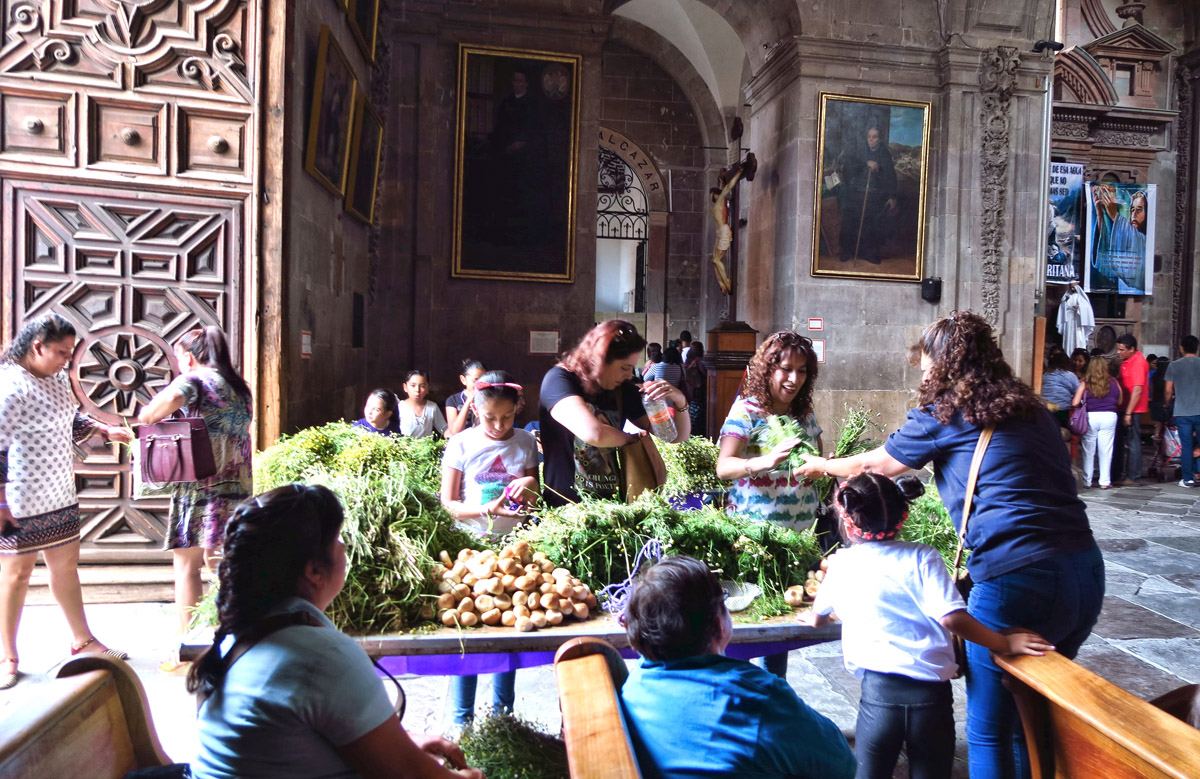 One of the many tables offering chamomile, bread, salt, and crocheted lanyards. Leave a donation and take what you want.

Slowly but surely, I begin to piece it together.   In my limited Spanish, I am able to translate one clue after another.   The rice in small clay pots, which I assumed was for consumption, turns out to not be for consumption at all, but rather to dehumidify the salt within, the symbol of the earth.  The colors of the chamomile, known as “manzanilla” in Spanish, represent white for purity, yellow and green for humility. The bread, of course, “the body of Christ.” The crocheted lanyards are reminiscent of the ropes and chains that bound Christ to the cross, and now bind the devout to the teaching. (These are my rough translations, based on handouts given out in Spanish.) 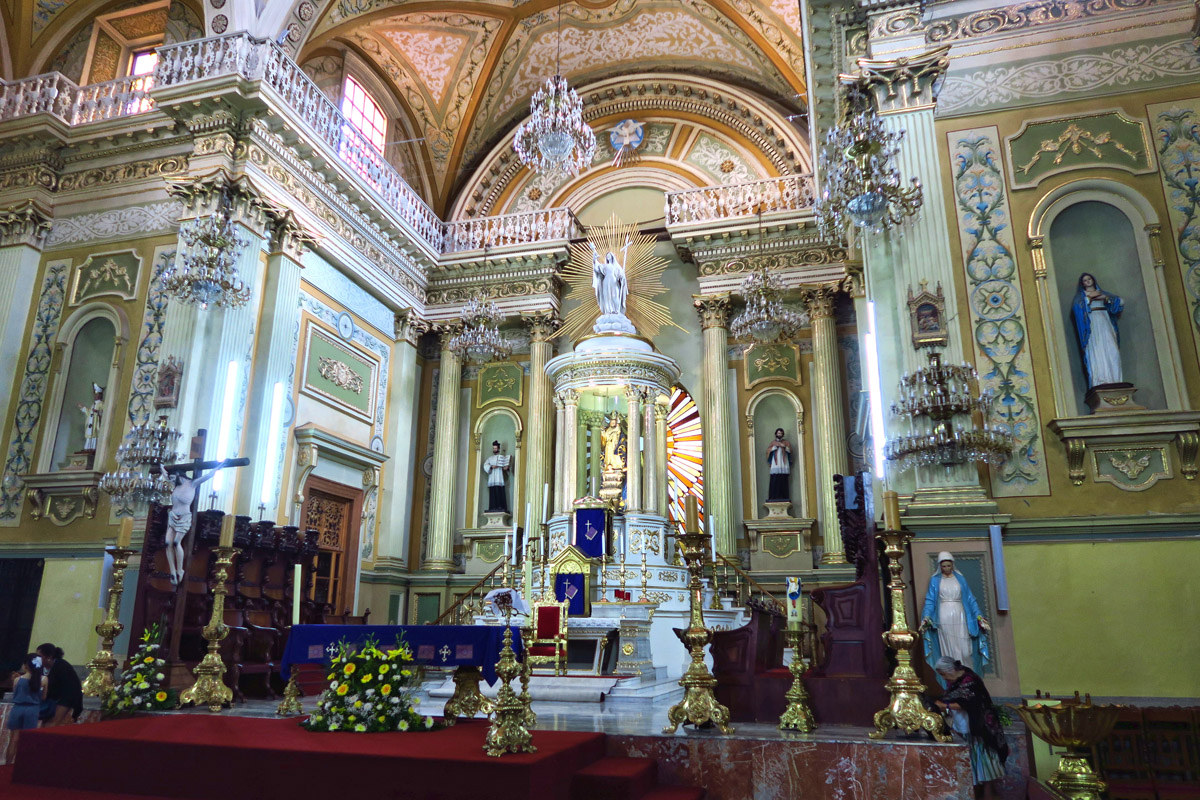 Inside, the churches are all beautiful. However, after seven of them, it’s tough to remember which is which…I believe this is the Colegiata Basilica of Our Lady of Guanajuato, built between 1671 and 1696. 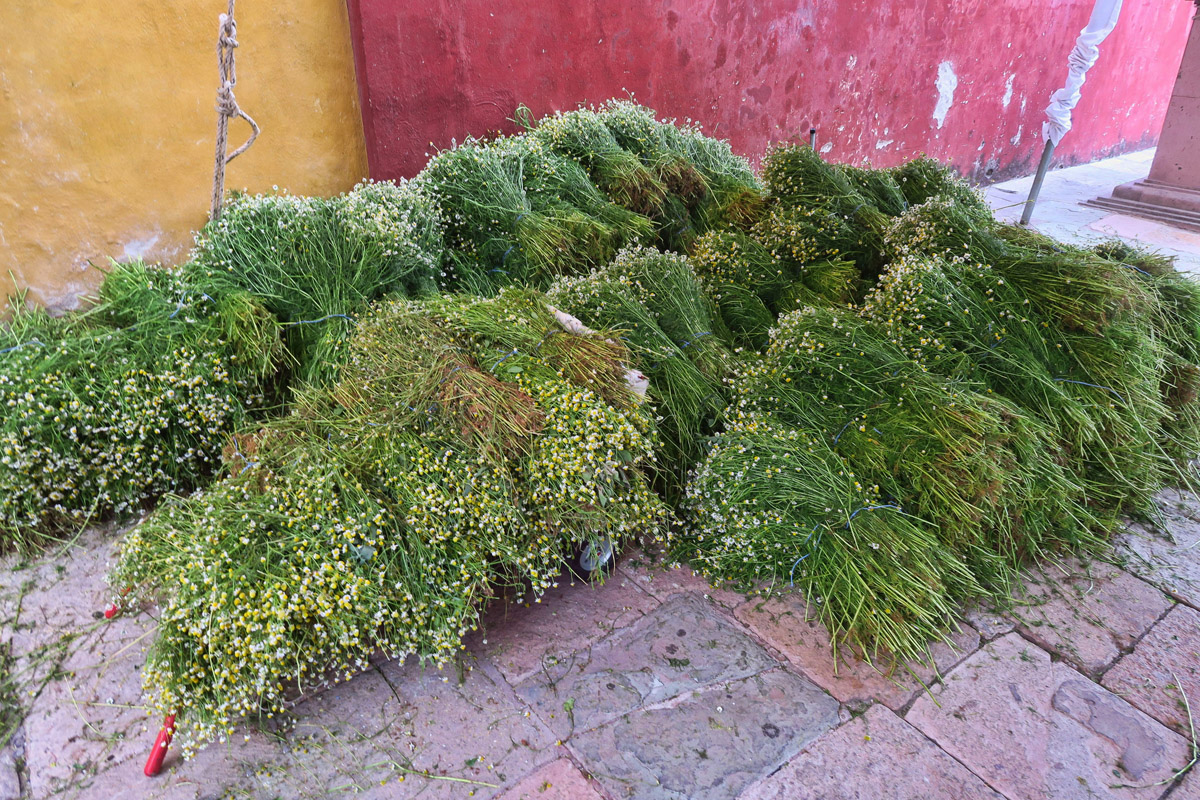 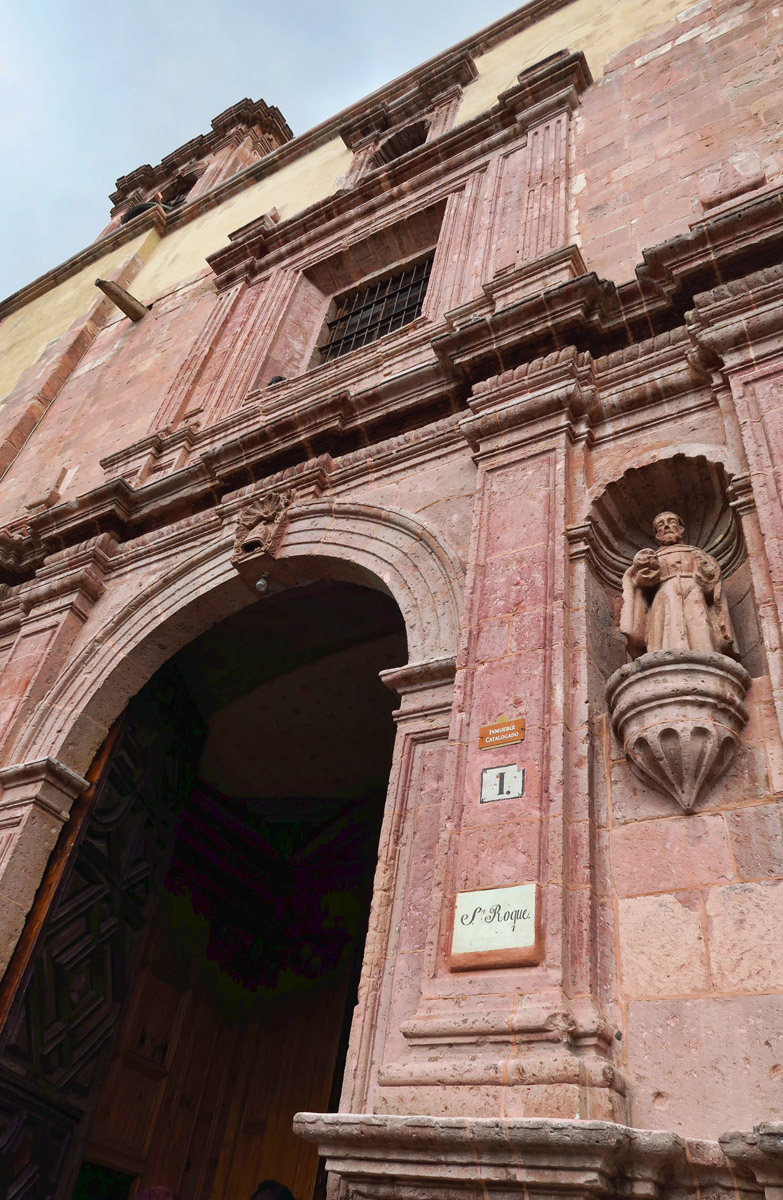 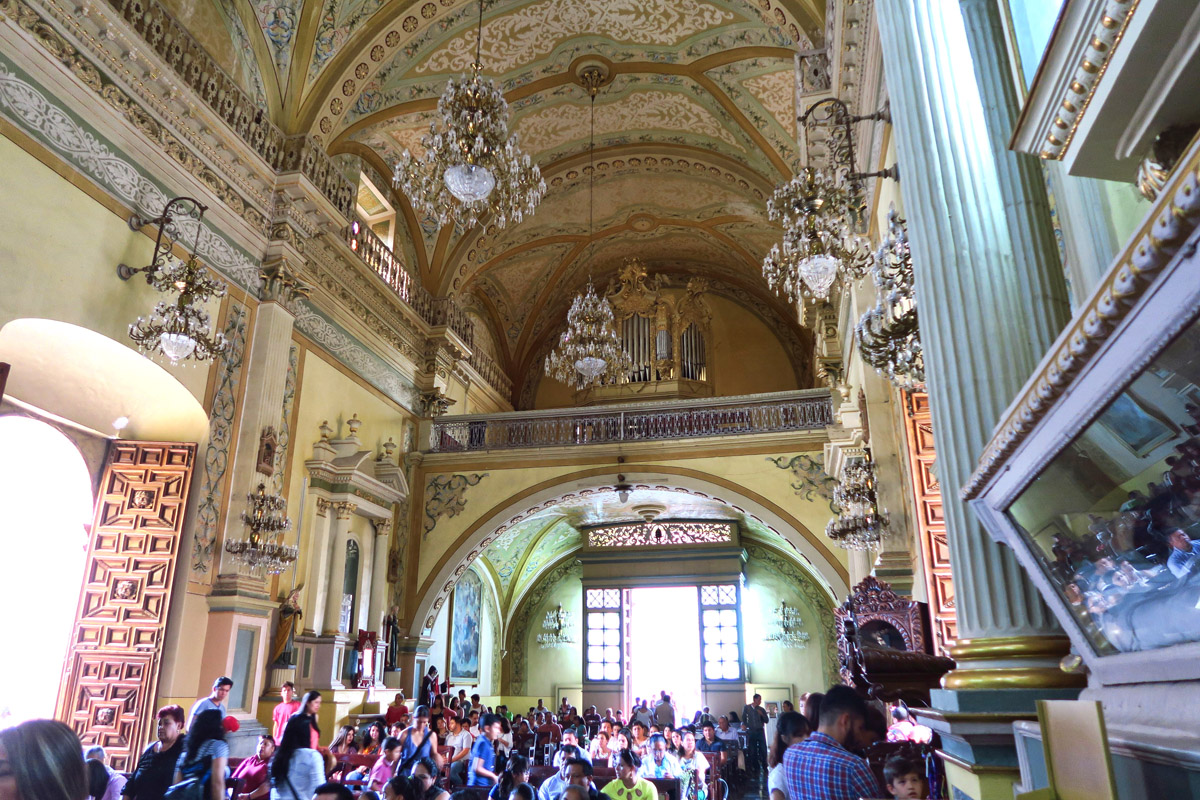 Like most churches, Templo de San Roche has a large organ in the back balcony.

By the time I reach the Plaza la Paz, about a half a dozen blocks from where I started this quest,  I’ve already hit five churches.   Funny that most of these were never obvious to me before now.   Like an obstacle in the middle of the street, I just walk past them.  But this visitation has given me a reason to slow down, step inside, and appreciate the ornate beauty and devotion the Catholics of Mexico have toward their faith.  On one hand, one could say look at all that money that went into the building of churches that could have been used to feed and clothe needy people.   On the other hand, witnessing it first hand, I realize it continues to “feed” them in a different way. 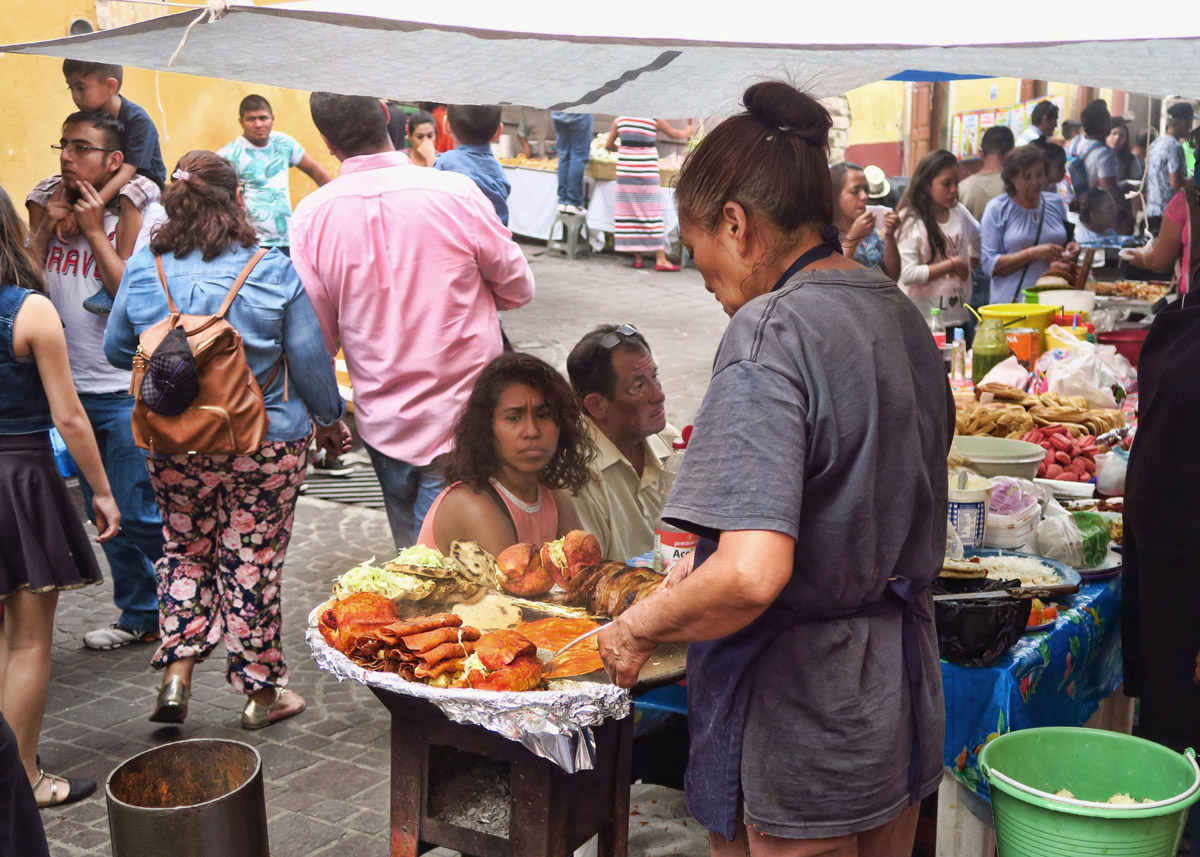 Food vendors also set up outside the churches. This woman is making Enchiladas Mineras, a Guanajuato specialty created to feed the miners. In addition to the usual enchilada ingredients, it also has potatoes and carrots. 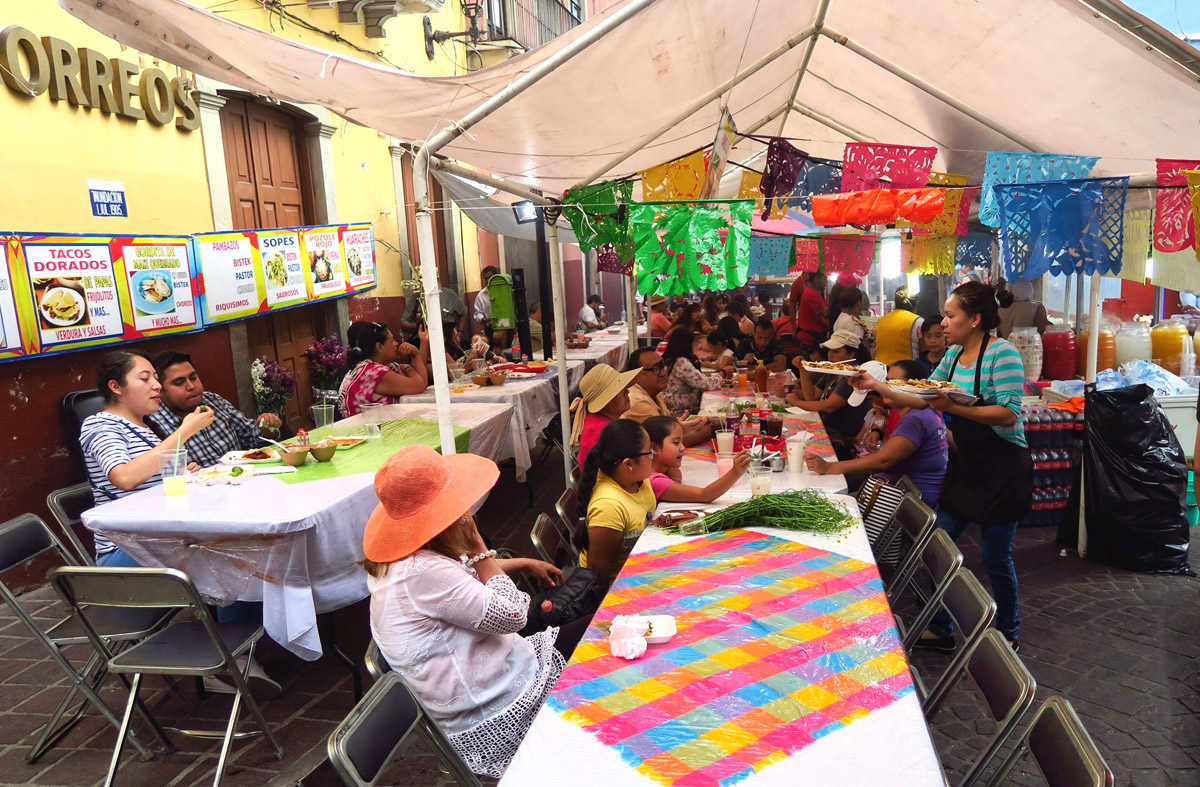 To show how quickly these food courts go up and down, the “Correo” sign in the upper left is the main Post Office. 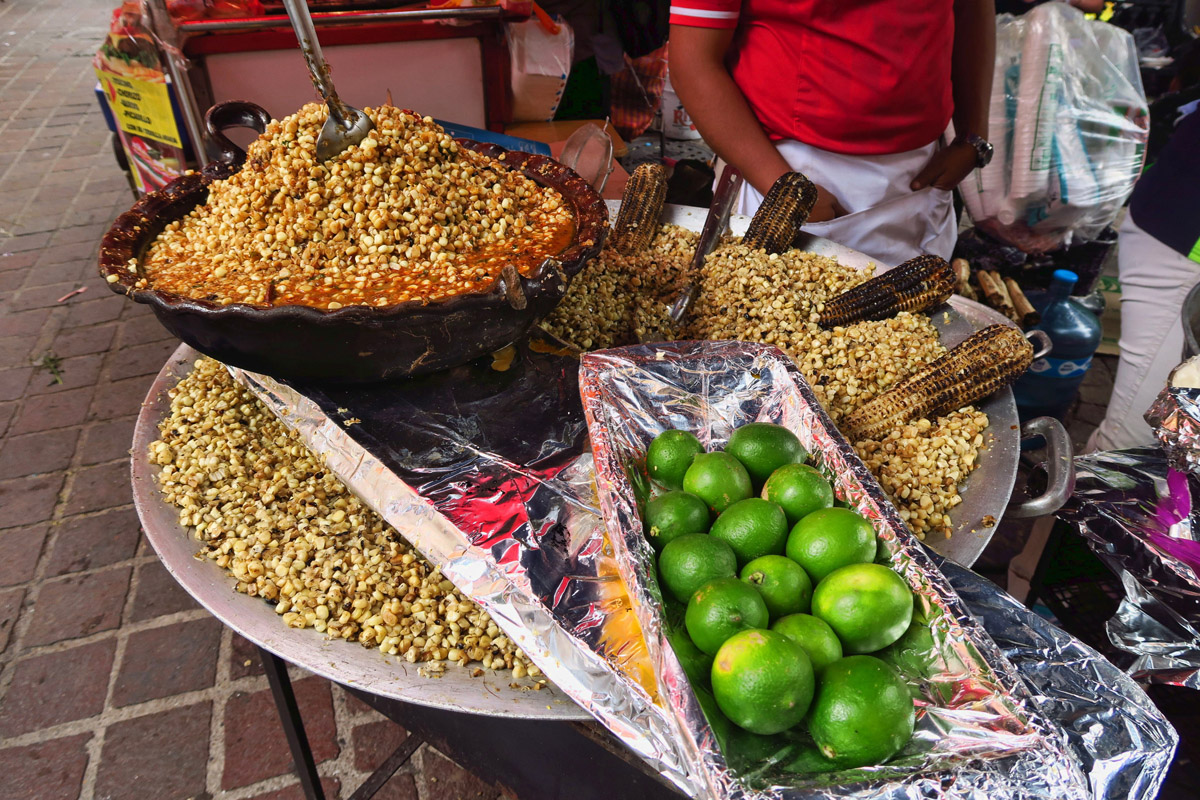 Roast corn, off the cob, served with a little chili, salt, and lime.

I never did succeed in my game of “Clue” at pinpointing the exact significance of the number “seven” in this tradition.  From doing research, I learned it originated in Ancient Rome, and spreads as far and wide as Poland to the Philippines. Some sources indicate it is related to the Seven Sorrows of the Virgin Mary.   Others suggest it’s about the seven locations Jesus visited in between his sentencing and the crucifixion, thereby symbolizing keeping Jesus company throughout his last night.  Since Guanajuato observes this tradition during the daytime, I tend to think it’s the former.  Either way, it signifies what they believe to be Christ’s sacrifice of love for the salvation of their souls. 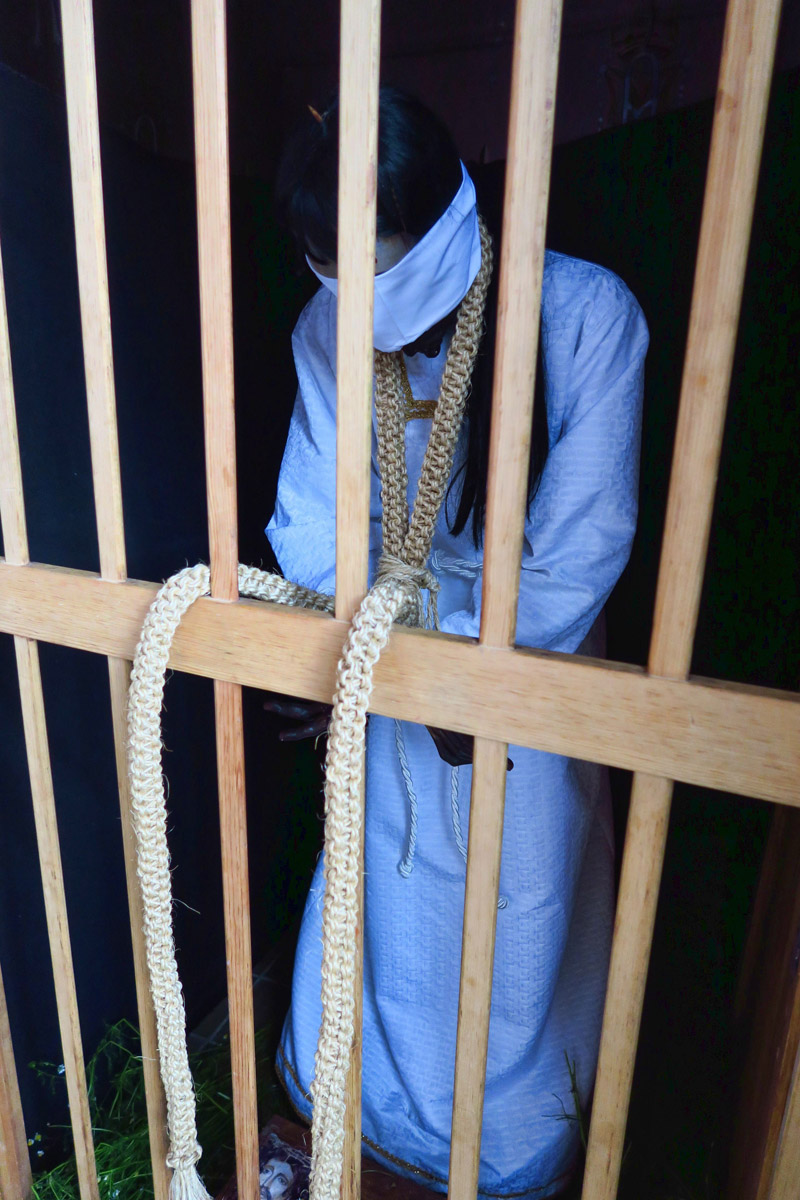 Another “prison cell” set up at a different church. 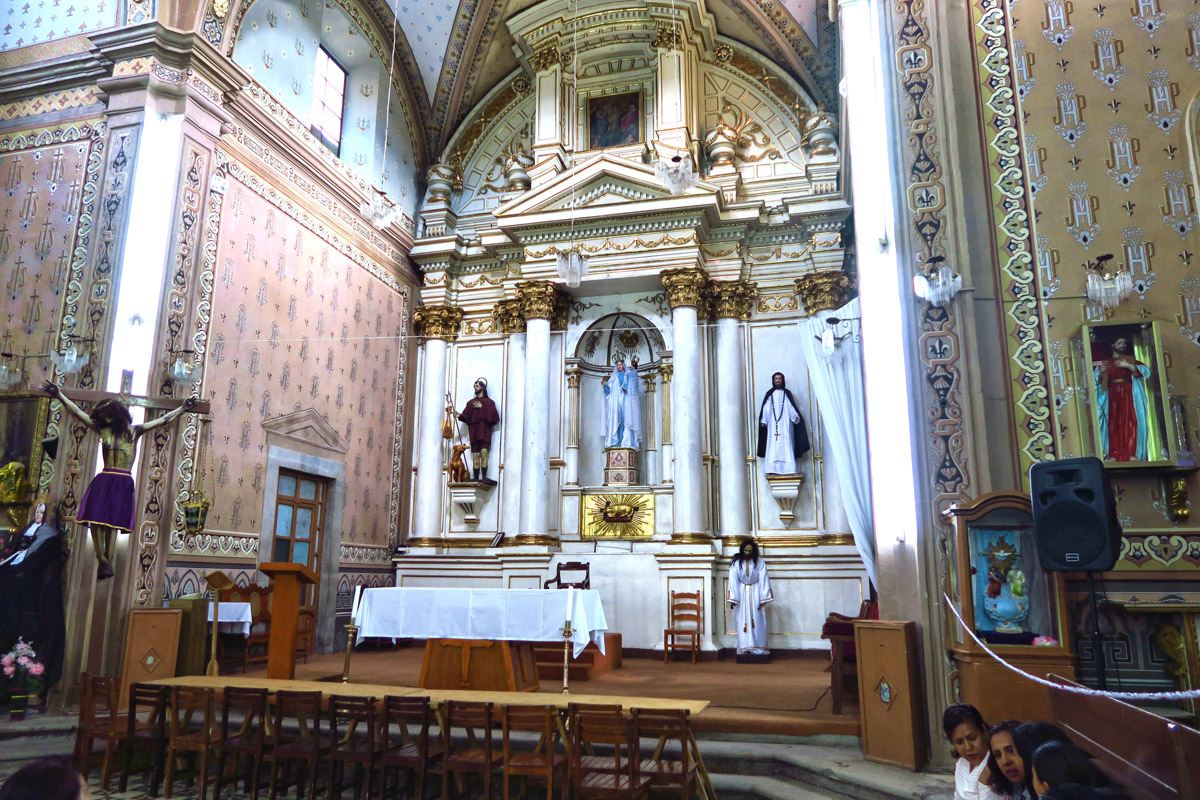 A “table for twelve” is being set up to depict the Last Supper. 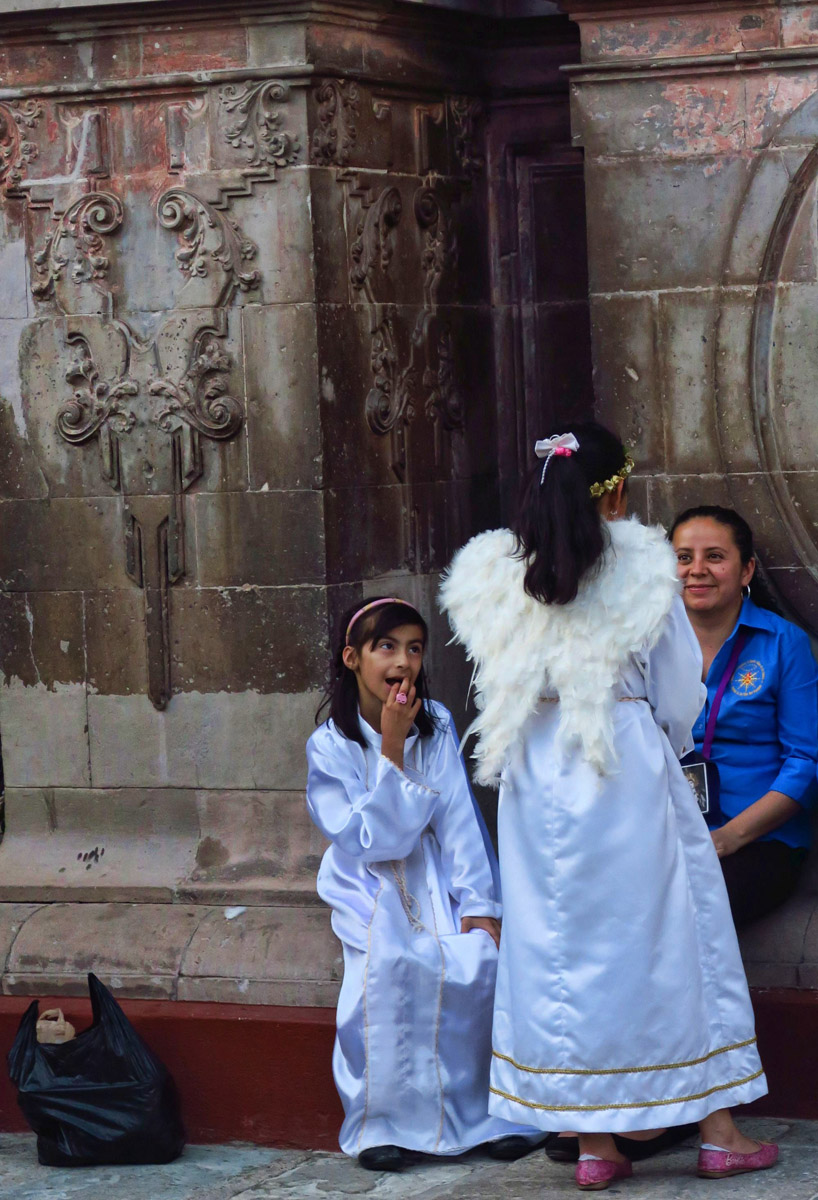 Personally, I prefer to take sanctuary in the non-material realm.  As the quote goes, “Nature is my religion and the earth is my church.”   But appreciating different cultures and customs through visiting other countries just serves to add a few more chapters to my own personal “Bible” of life. 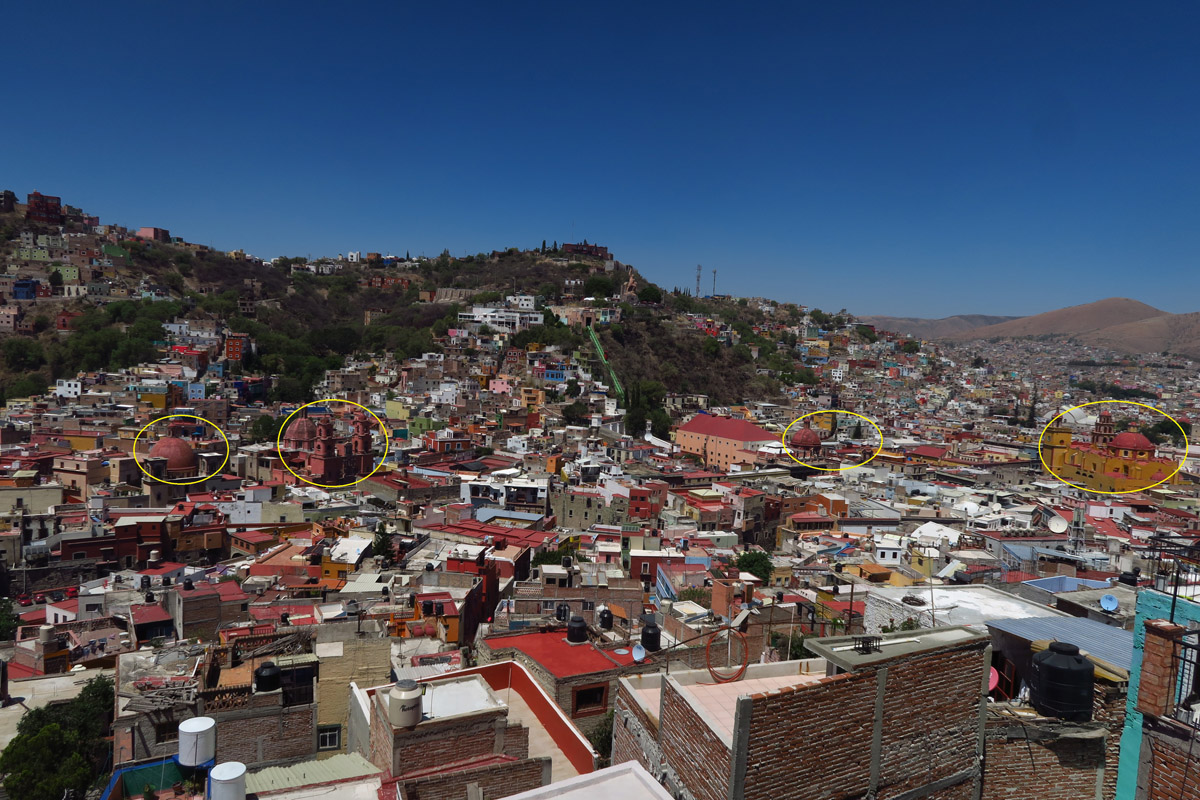 View from the terrace of the casa where I am staying…you can see four of the seven churches visited from here. (NOTE yellow circles around each.)

6 thoughts on “Religiosity and A Game of Clue”