I’ve decided to leave my Tracker behind for my loop into the Canadian Maritime Provinces. Several View/Navion owners who have gone before me all say “You won’t need it, and in fact, it will be more trouble on these pot-holed roads and ferries than it’s worth.” So I find a place to store it near the border. This will also save me from the dilemma of what to do with all the bottles of liquor I seem to have amassed for the past four years of full timing. In addition to my daily refreshments, there are mixers, wine and craft beer souvenirs from wineries and breweries, duty free from Mexico. One would think from the looks of the Tracker contents that I had a drinking problem. 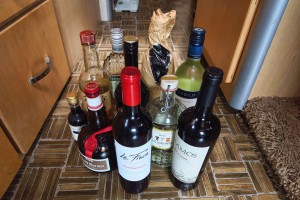 “Until we meet again…” (And this doesn’t count the craft brews and the box of wine!)

It’s more difficult to drive off and leave the Tracker behind than I had anticipated. He’s been dutifully following along, serving me well for over four years now. So to cut the “umbilical cord,” removing the Blue Ox tow bar makes me sad. What is it about automobiles that cause us to have such an emotional attachment? Some people even go as far as giving them names, which must make it even harder. 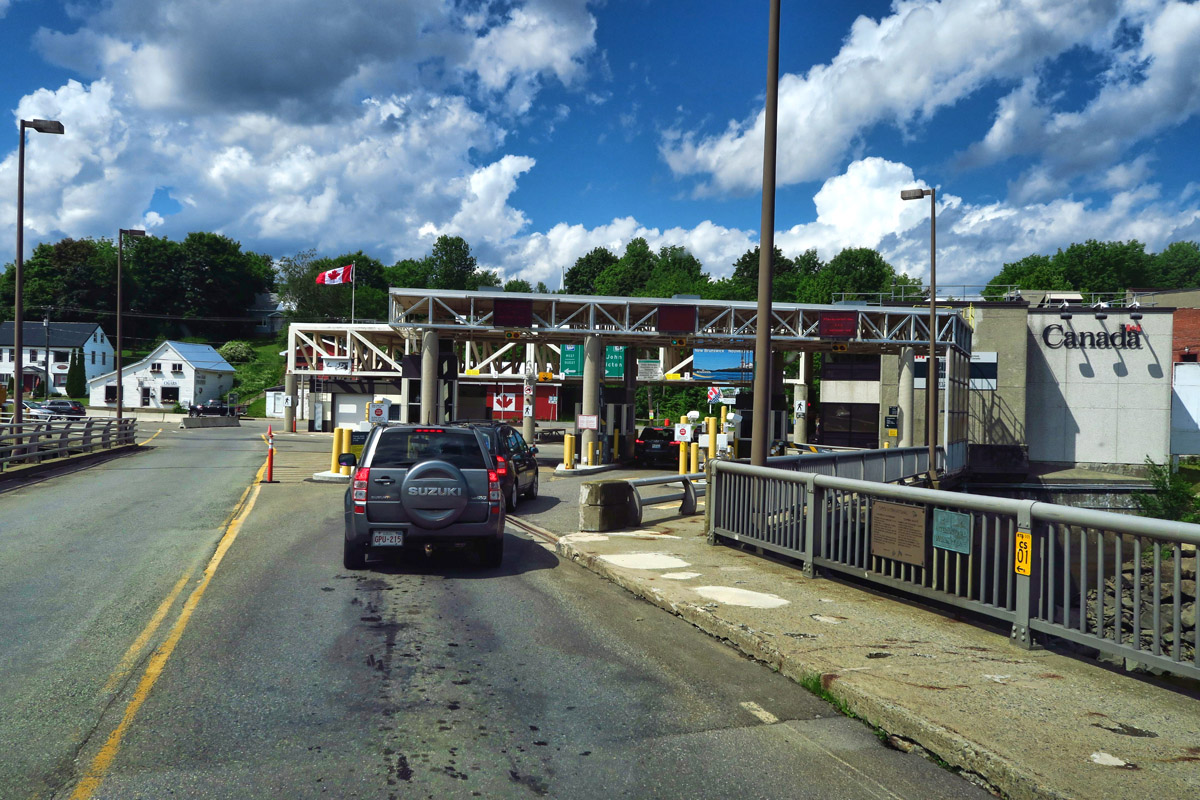 The smaller, downtown customs crossing is reported by the locals in Calais to involve less “B.S.” Easy! 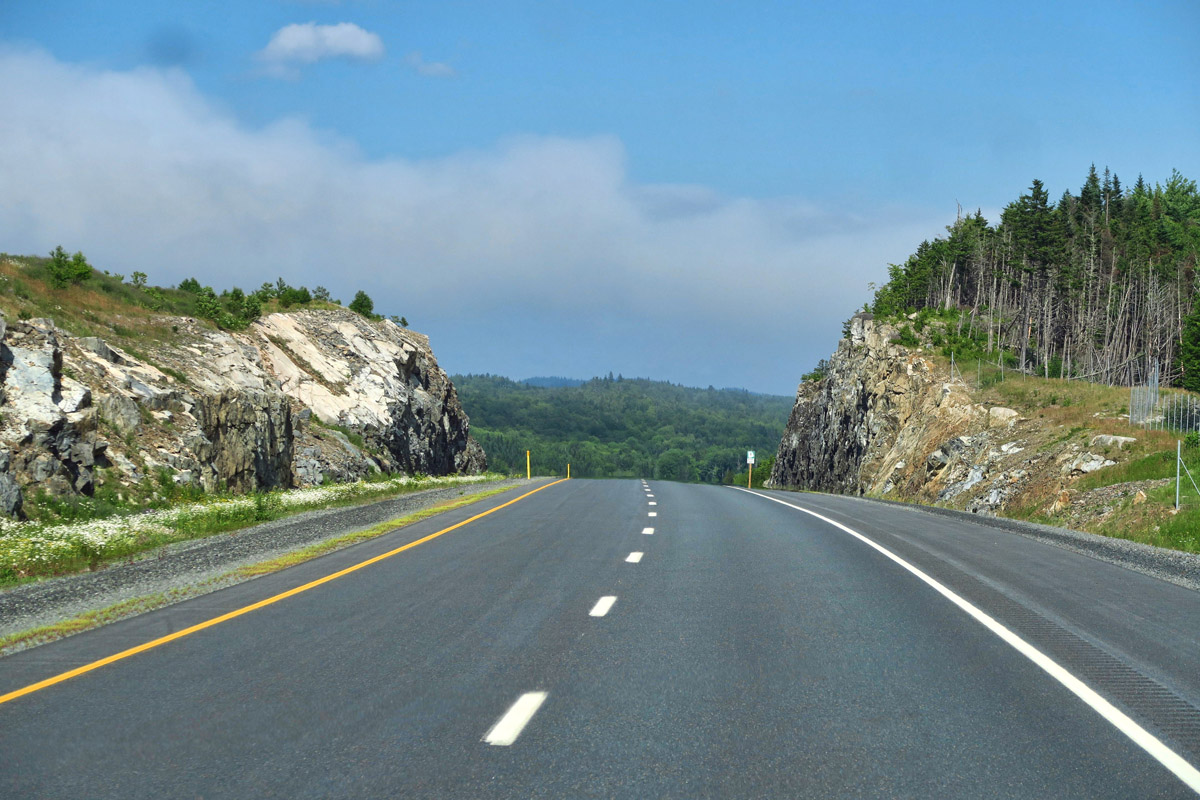 Trans-Canada Highway (TCH) is in much better condition than I expected. 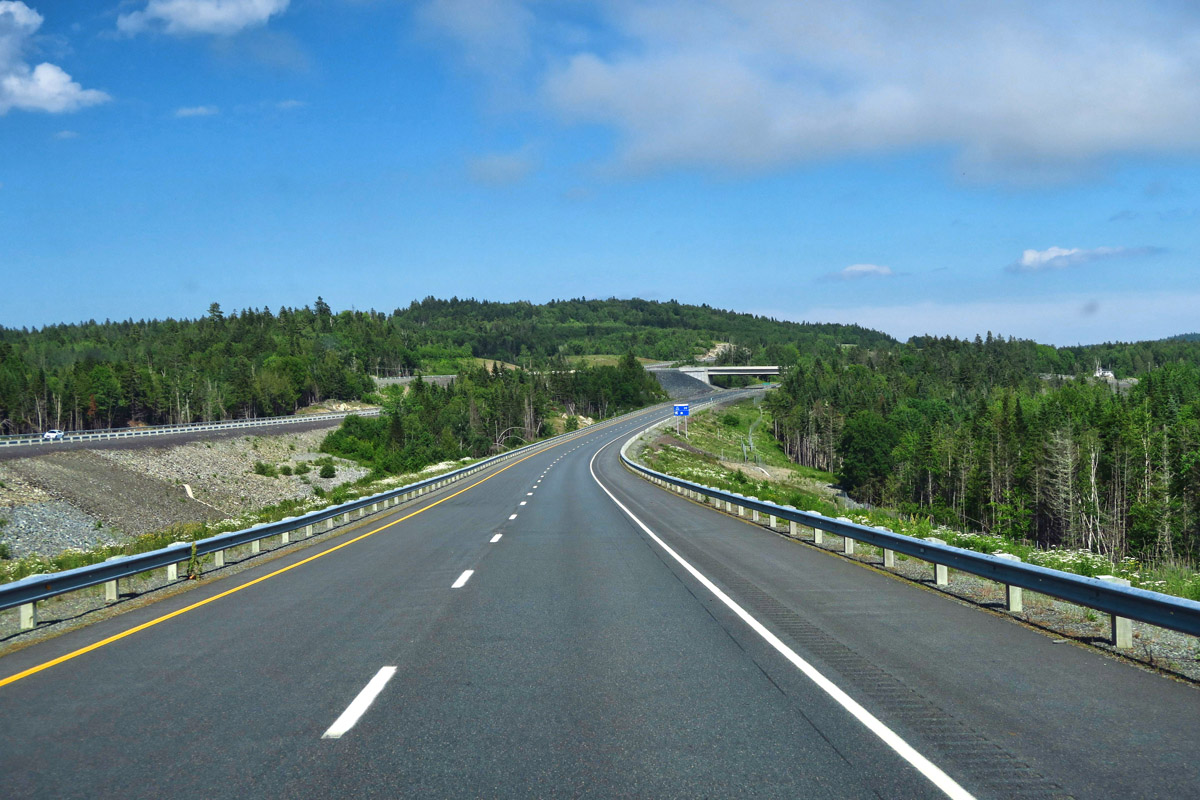 It’s smooth sailing and no traffic. Even with my late border crossing (3:00pm) the sun doesn’t go down until after 9pm, so I have plenty of drive time.

Leaving my “toad” behind is both a blessing and a curse. Already, driving the Winnie feels like a sports car compared to towing. Hills are much easier, driving is less stressful, and speeds are much faster. It’s a treat being able to only take up one parking space instead of circling the lot, hoping for a pull through opportunity. And I backed up twice today, just because I could. Yes, I will miss opportunities to drive to more isolated trails and remote fishing villages, but there is plenty to explore here just with the Winnie. With the expensive “by the foot” priced ferries and reportedly brutal potholed roads, it just makes sense to leave him behind for a little rest, particularly since my exit point is the same as my entry point. 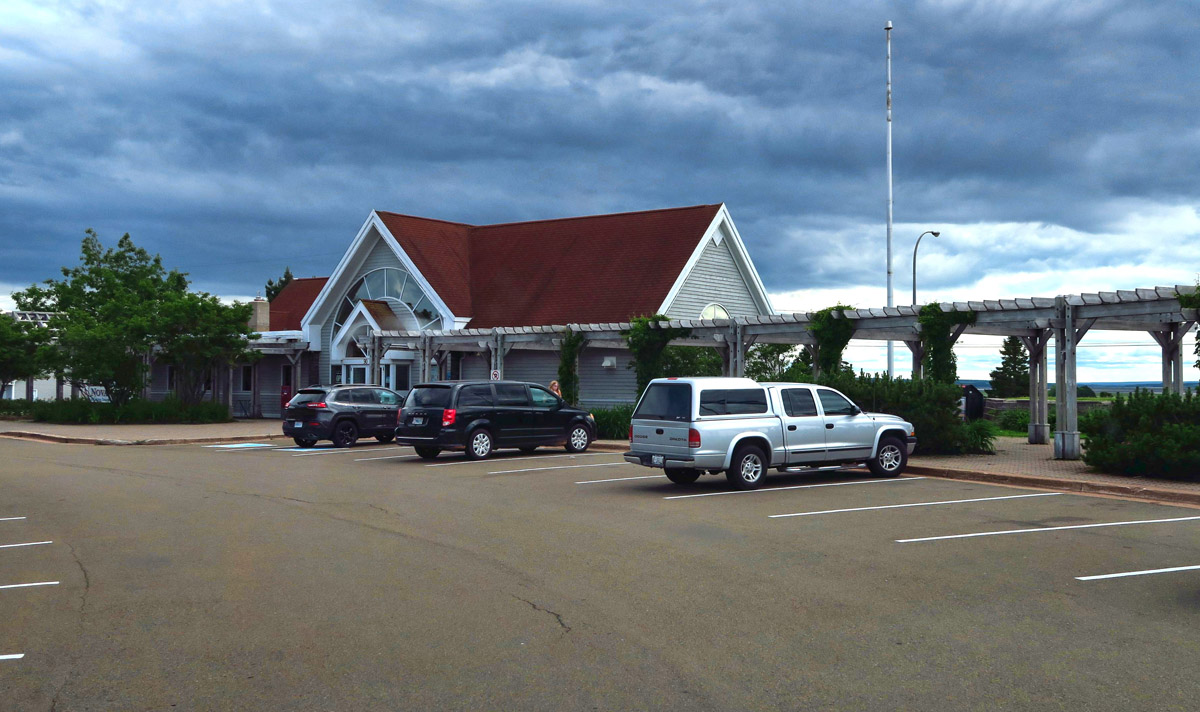 Canada has the best Visitor Centers I’ve encountered to date. The sign for information, a giant question mark, appears at almost every exit. 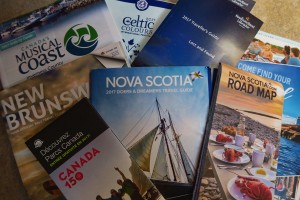 But not only are their Visitor Centers impressive, so is the collateral material! A nice big fold-out map and accompanying attractions guide for every province, all for free!

As it turns out, crossing the border is a non-issue. After having asked several locals which was the better option, the older, original crossing in downtown Calais, or the newer, fifty million dollar “commercial” crossing outside of town, the vote was pretty much split 50/50. But their reasons sway me toward the older crossing. “No B.S. from those guys. Yes, the commercial crossing is less crowded, but those guys at the newer crossing don’t have enough to do, so they may hold you up longer.” I choose the older crossing. I’m in line for 20 minutes. My Customs Official asks all the typical questions of any border crossing. They are checking for anything that might be sold, particularly liquor. And firearms, mace, pepper spray, etc. The Tracker is now traveling liquor store, and I also left behind my one “firearm” a can of Glacier National Park bear spray. So without much adieu, I’m on my way along the TCH, or Trans-Canadian Highway. 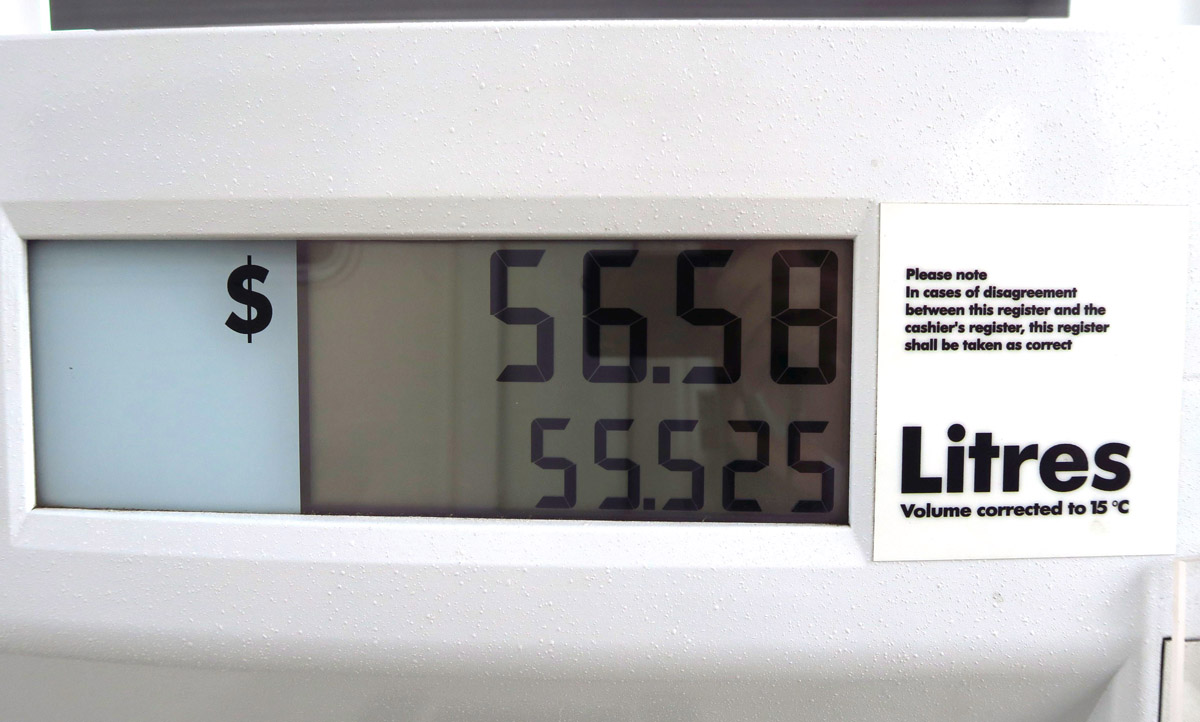 Another metric vs imperial challenge…how much does diesel cost? Here, I must convert both measurement and currency. For my first fill-up, I spent $44 for 14.7gal. About $3US a gallon. I feel like I am back in math class solving statement problems! 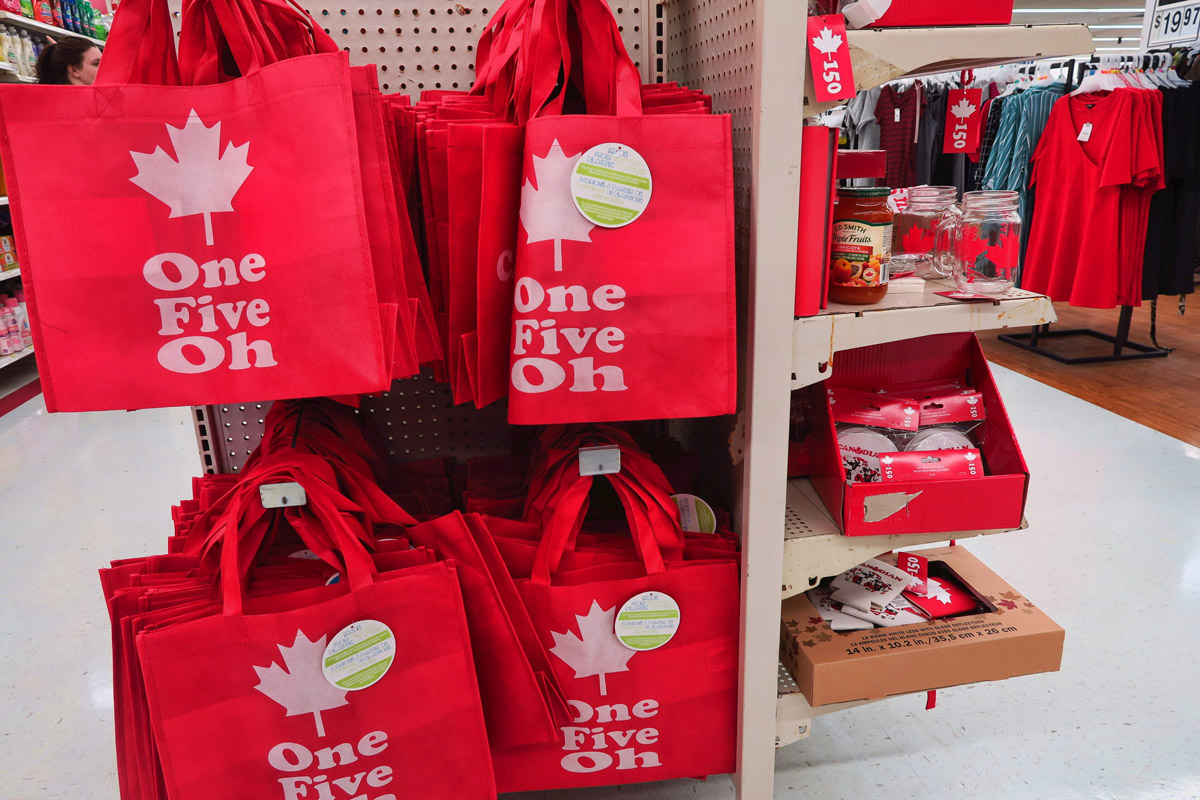 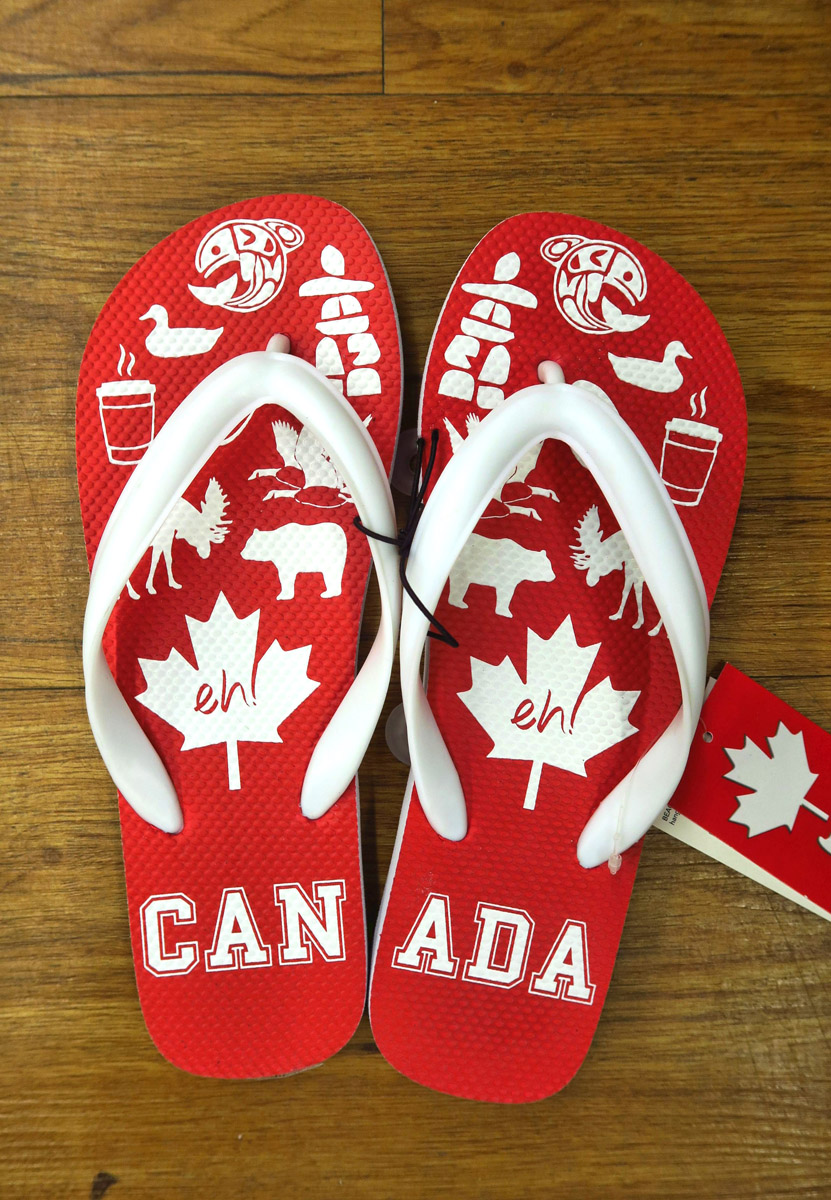 No question with these shoes which is the left vs right, as long as you know how to spell Canada. 😉