New Brunswick is beautiful with rolling green hills covered in evergreens. The highways are lined with tall stalks of purple and pink lupine, the largest I’ve ever seen. I make the New Brunswick Visitors Center my first stop after crossing the border, followed by the ATM at the gas station next door. The very helpful woman greets me at the door and loads me up with maps and brochures for all the Maritime Provinces. I tell her I’d like to make Fundy National Park my intended destination for the night, to which she replies, “No problem, we called earlier and they have plenty of space.” Not knowing anything about Canada or its National Parks, I chose to believe her, all the while with that nagging voice in the back of my head, “It’s a three day weekend on Canada’s 150th Birthday. And the park’s Discovery Pass is free for the asking…”

I arrive to a line of campers at the kiosk, all wondering what they are going to do for the night, since the park is completely full. Thankfully, the helpful ranger directs us on down the road to the Ponderosa Pines RV Park. It’s a bit steep at $40CAD for the “non service” dry camping section, but prices are not posted anywhere, so I suspect it’s on a sliding scale according to National Park availability. But for a steamy hot shower, wifi, and close proximity to Hopewell Rocks at less than a mile away, I am happy to pay it. 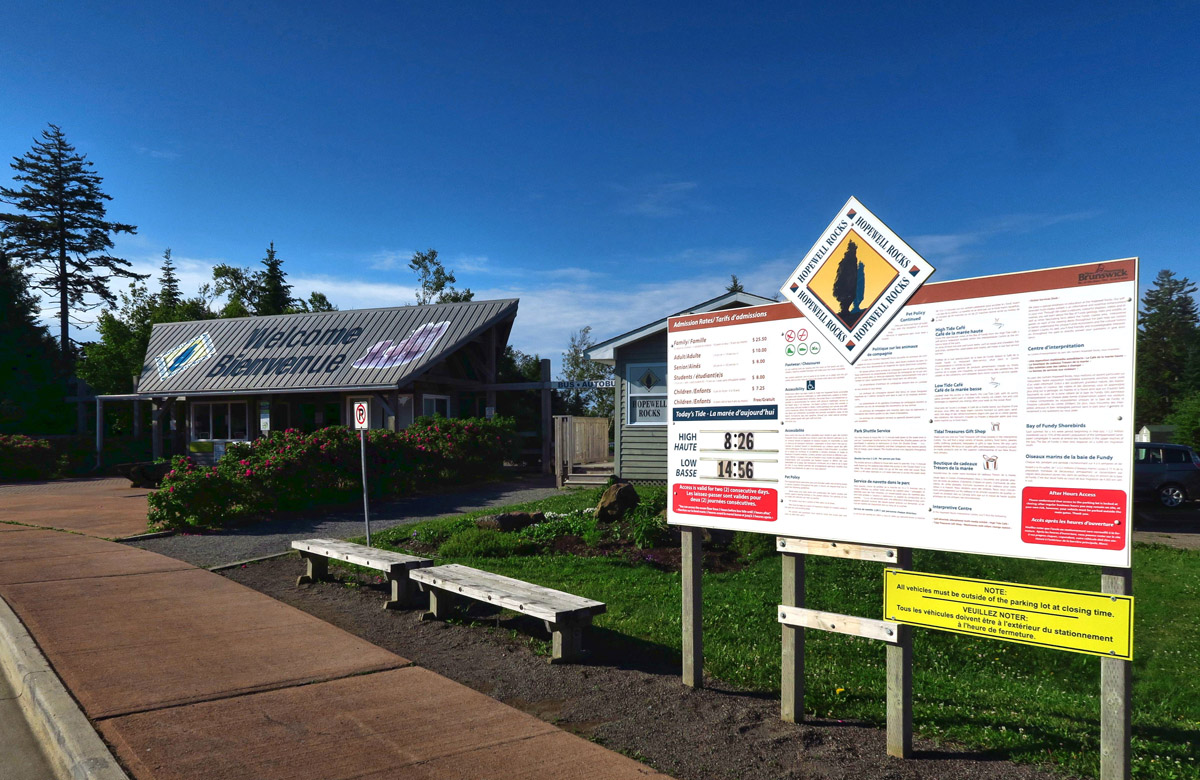 Hopewell Rocks is a province-run operation. Everything here is very nicely done. 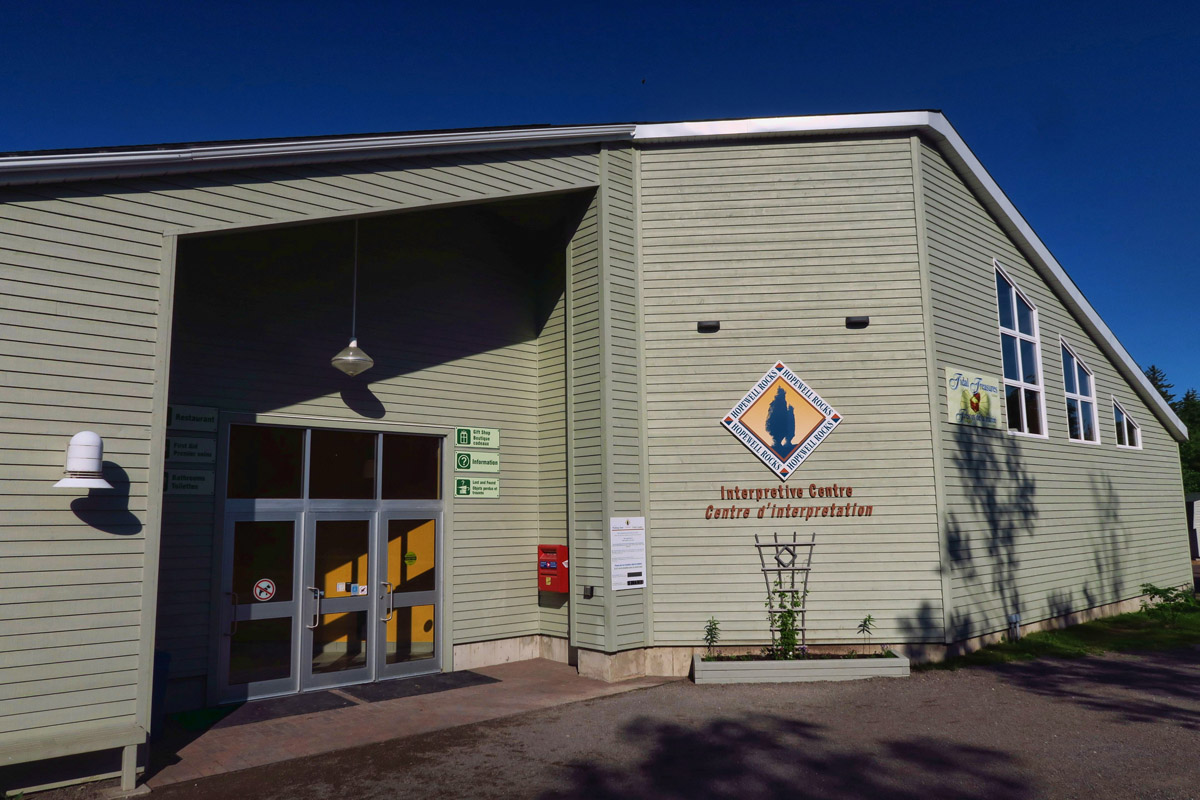 The Interpretive Center contains great displays on the world’s greatest tidal swing in the Bay of Fundy. 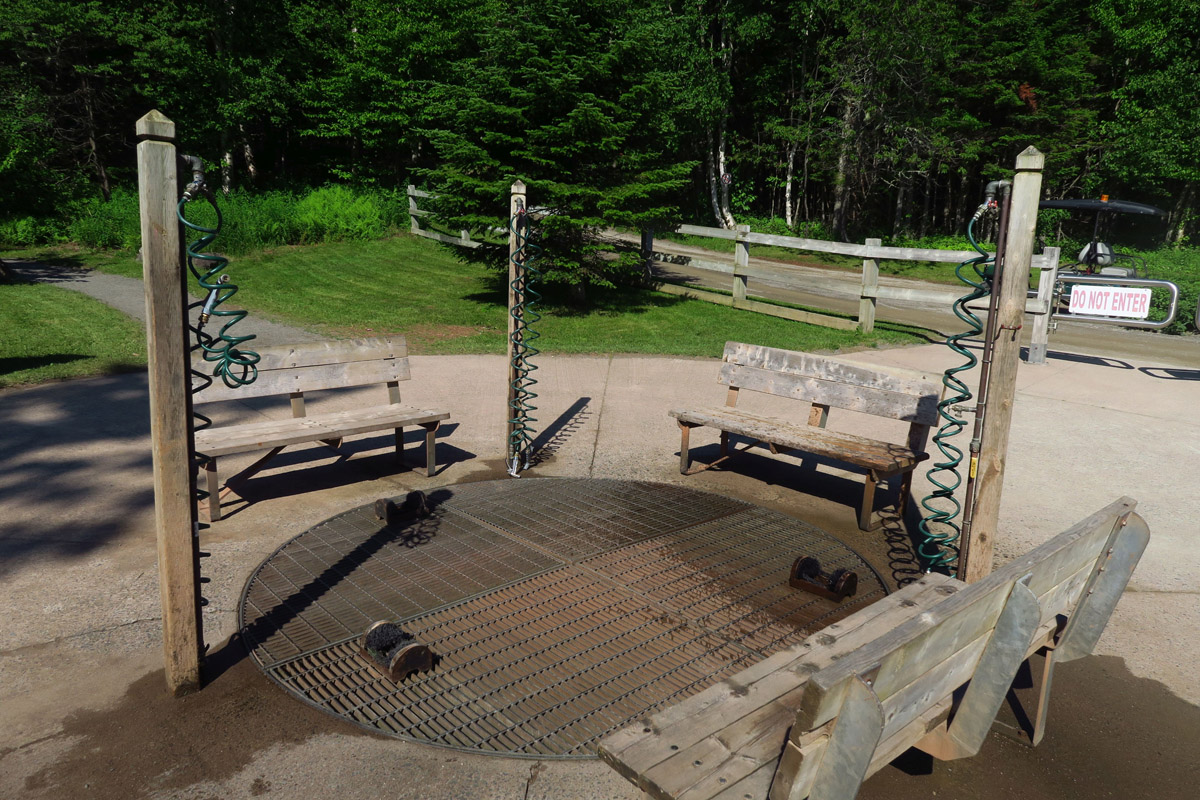 They even have an excellent foot-washing station for cleaning up after a walk on the ocean floor. 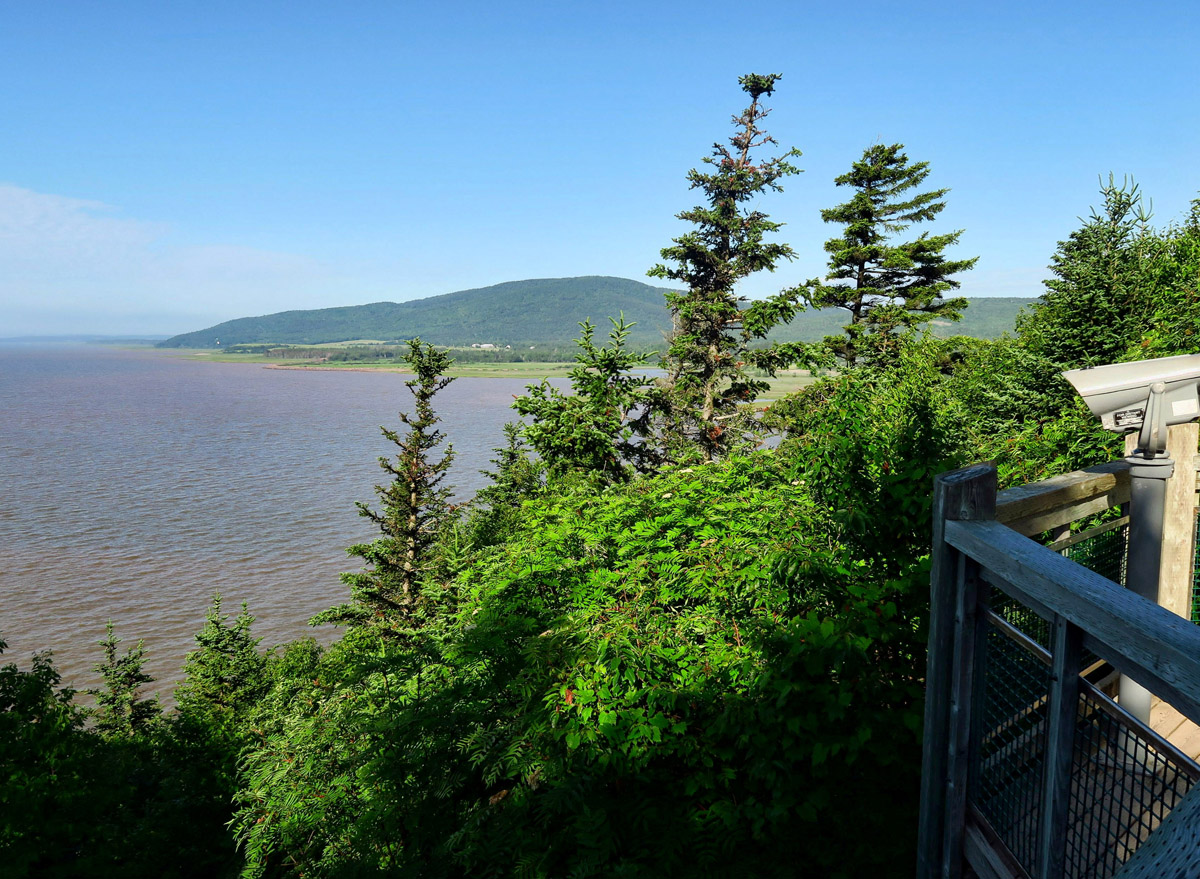 The Bay of Fundy from Hopewell Rocks Lookout Point at high tide, 8:30am. 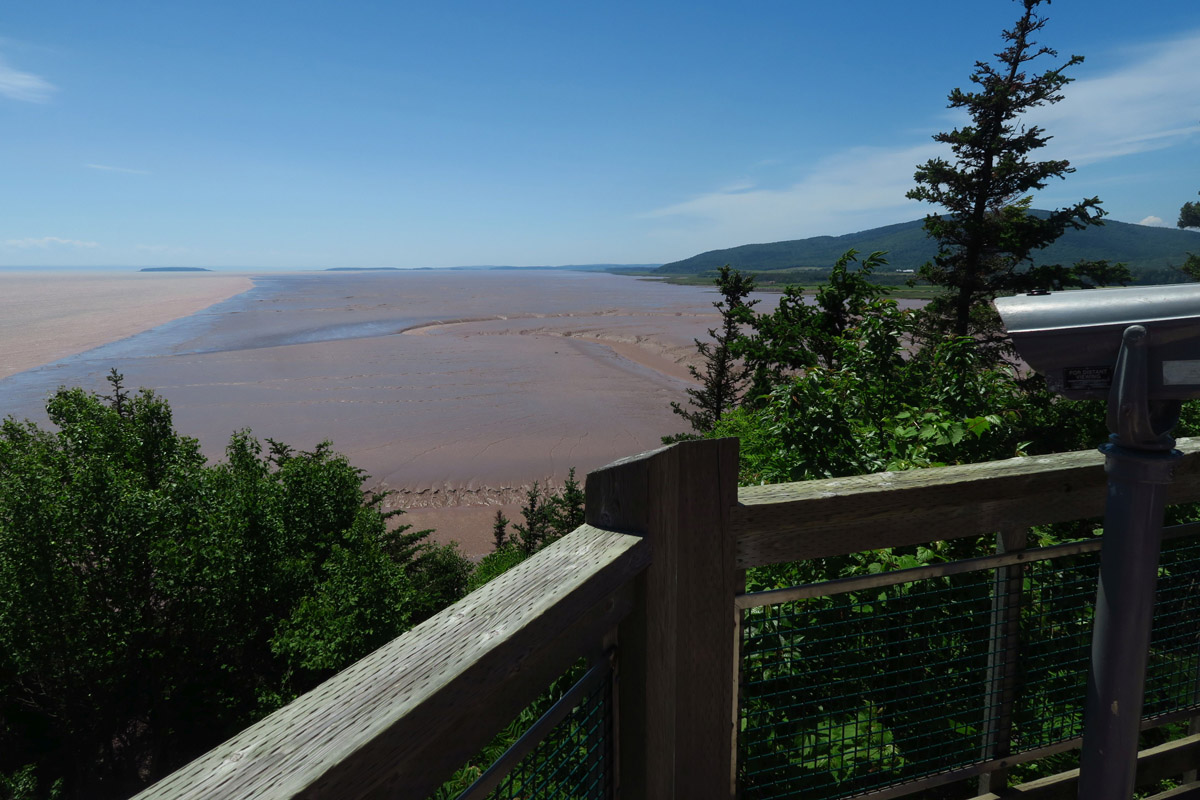 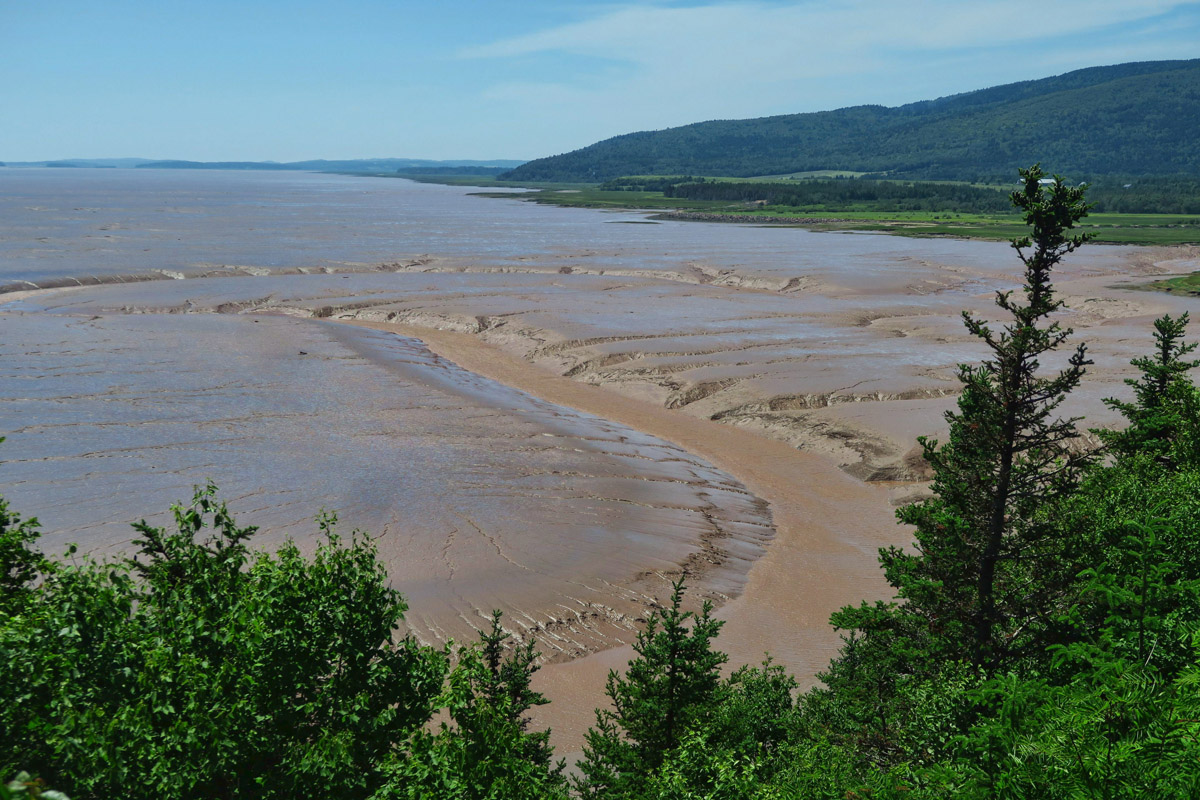 This was a giant bay just 6 hours ago…

The Bay of Fundy is famous for the largest tides in the world, and there’s no better place to get size perspective than Hopewell Rocks. I don’t typically care for roadside attractions that charge, this one at $10CAD, but this one is run by the province and nicely done. Well groomed paths lined with fragrant wild roses growing around the large Interpretive Center, and walking trails through Christmas tree-smelling fir forest make the walk down to the beach a delight, especially in the early morning (High Tide: 8:30am) before the crowds arrive to walk on the ocean floor (Low Tide: 2:30pm.) They have a nice, large RV parking lot, so it’s great for waiting out the variance between low tide and high tide. 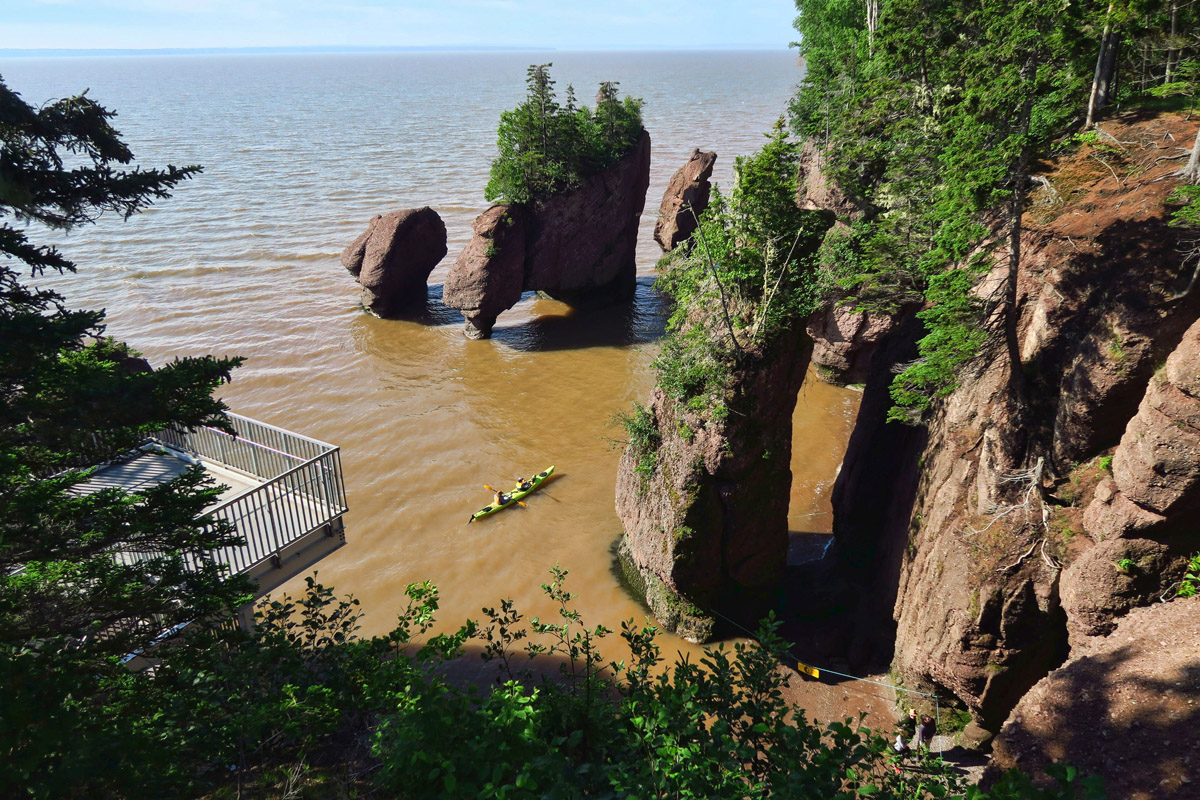 Kayak tours are offered out to the “flower pots” at high tide (about 8:30am.) 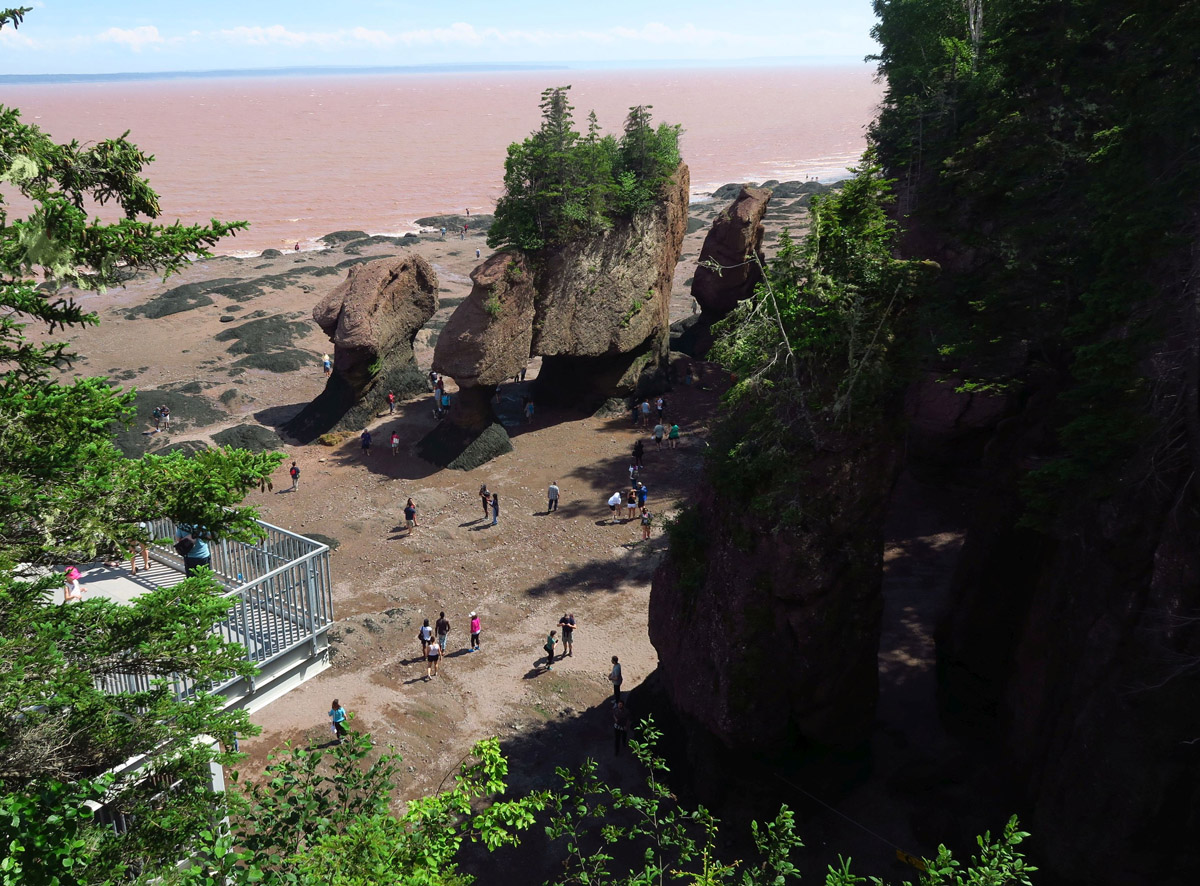 You can “walk on the ocean floor” three hours before and after low tide (about 2:00pm.) “ 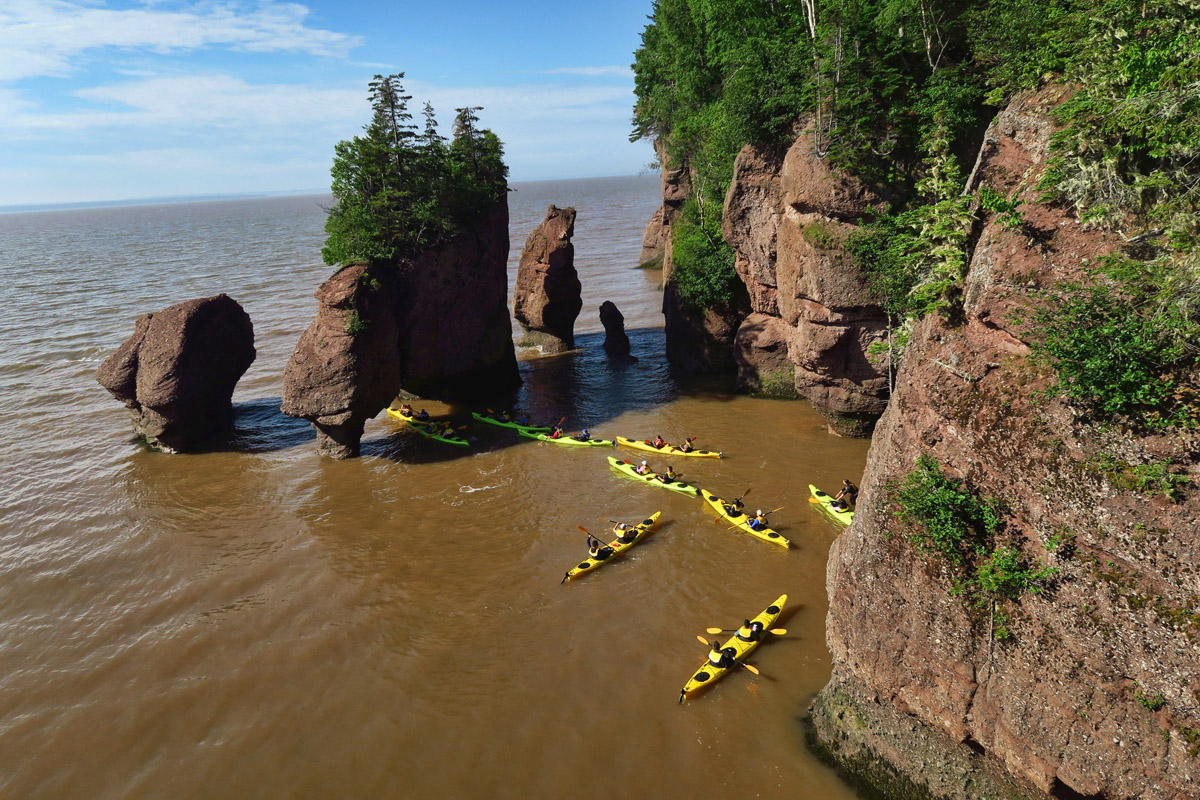 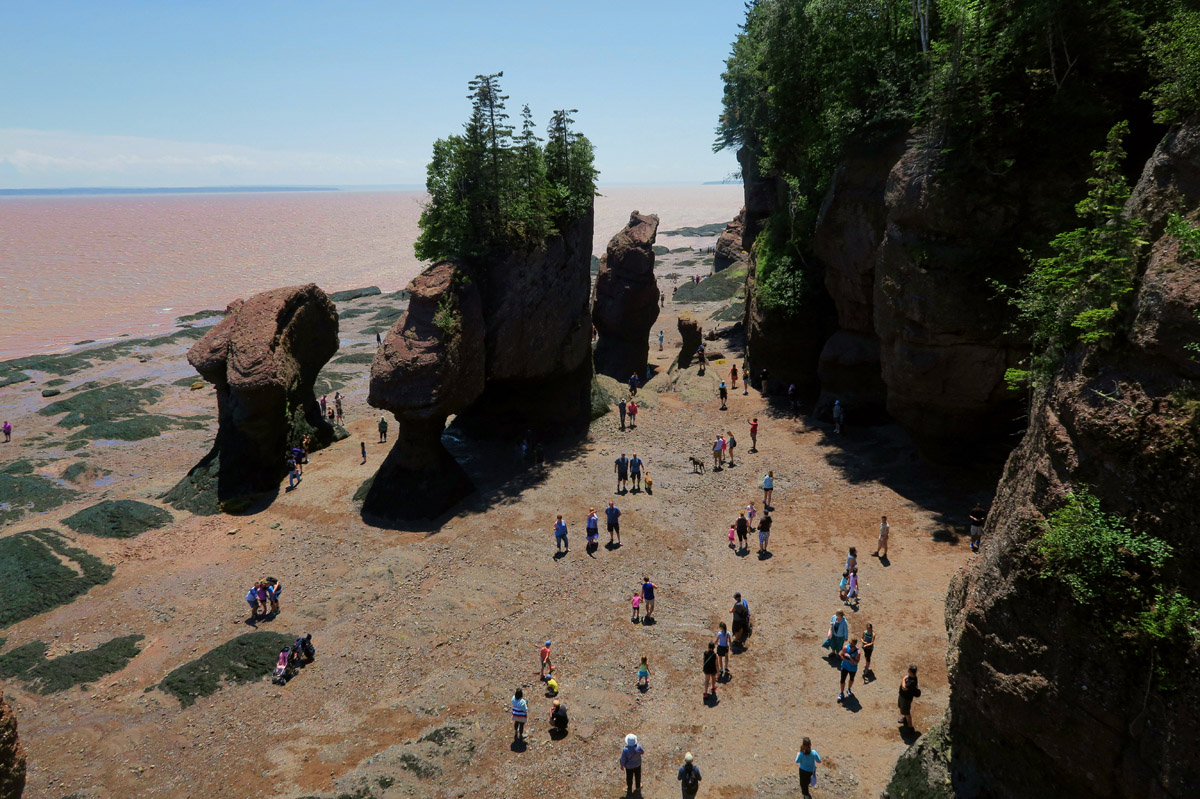 Six hours later, instead of kayaking under Lover’s Arch, you can walk under it. 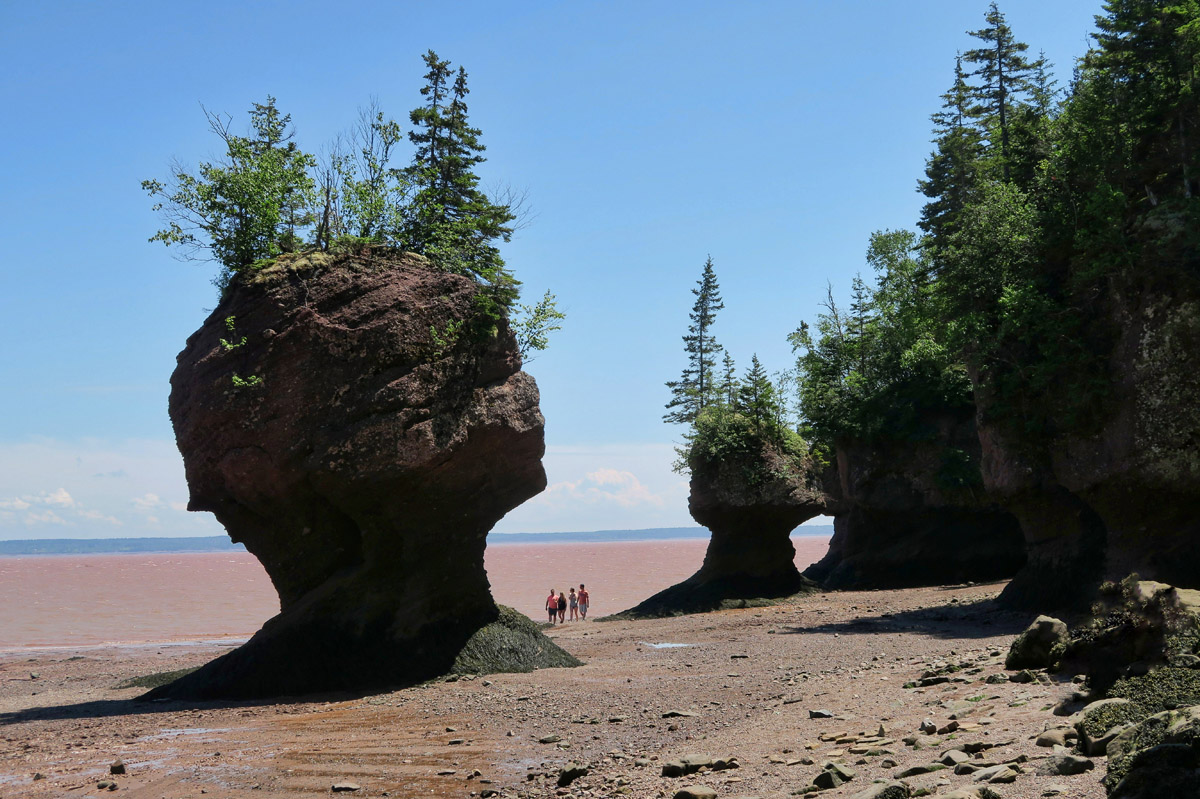 The “Flowerpot” rocks are created by erosion of sedimentary conglomerate and sandstone rock.

Tides can rise up to 13 vertical feet per hour, traveling 6-8 feet per hour, and can reach 46 feet of variance, the equivalent of a 4 story building. One hundred billion tons of water moves in and out of the bay twice every 25 hours, powered by the gravitational force of the moon and sun. This vast tidal swing is due to the Bay of Fundy being funnel-shaped. Tides are pushed up increasingly higher as they travel up the bay, so when they reach Hopewell Rocks, they have increased in height on average of 35 feet.  Our interpretive guide puts this mass movement of water in perspective.  It would take the bay, 160 billion tons of water, a year and nine months to flow over Niagara Falls.   Its tidal swings are eleven times the world average. 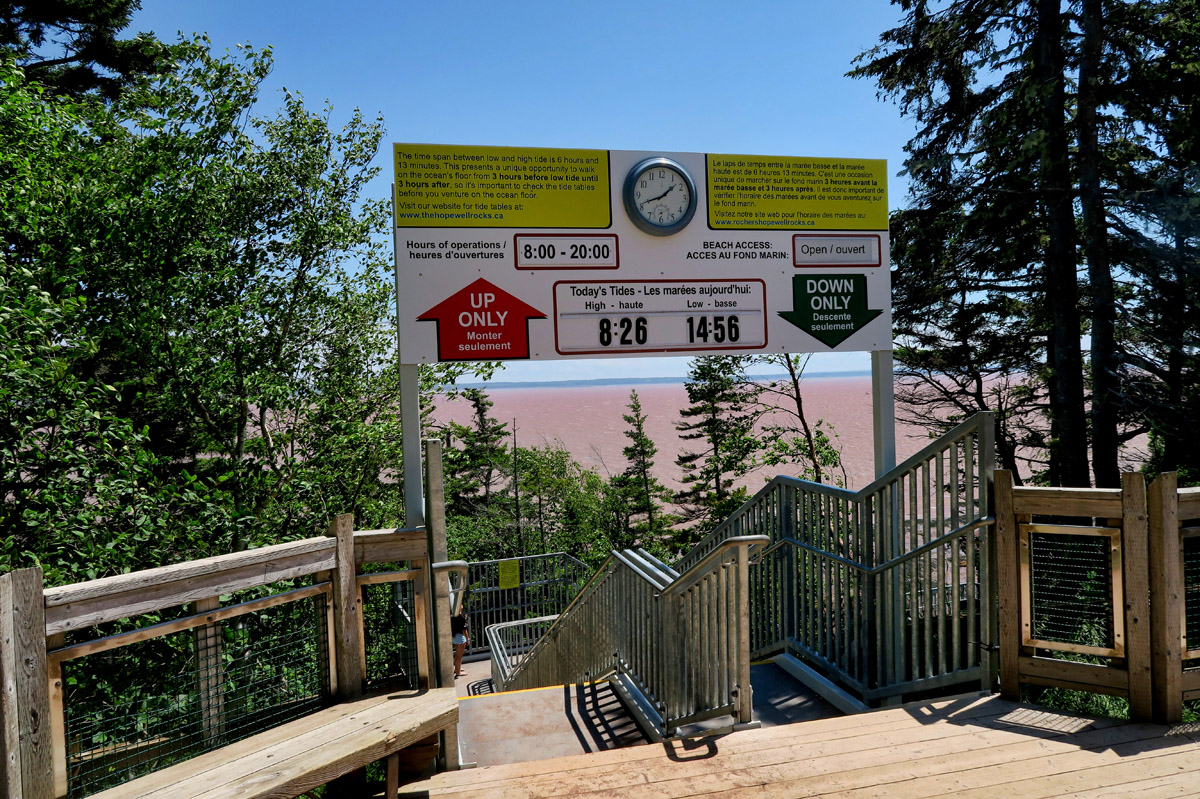 A series of stairs lead down to the ocean floor, along with tidal times. I love the fact that they have designated direction of decent for ease of crowd flow. 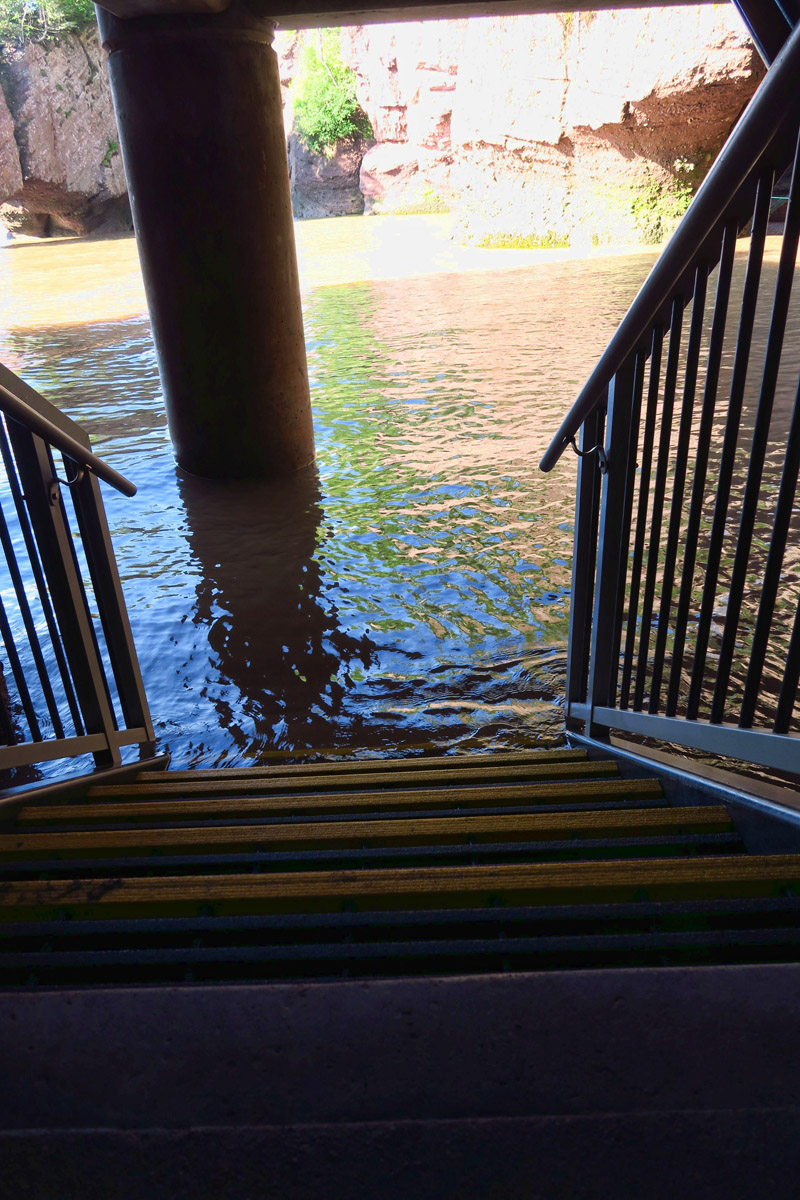 A little daunting at high tide… 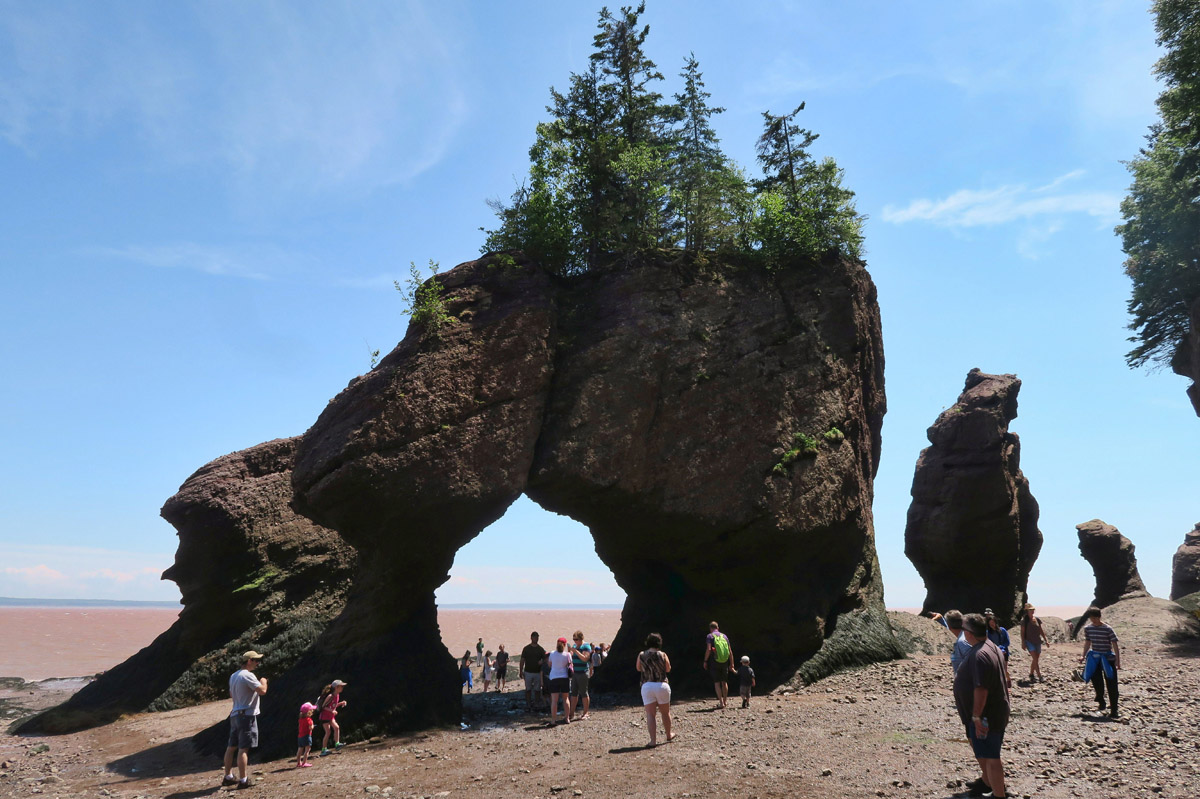 Lover’s Arch is named because it is said the two separate opposing rocks resemble two people kissing. During highest tidal times, (full moon,) the water reaches the bottom of the arch, 46 ft from low tide. 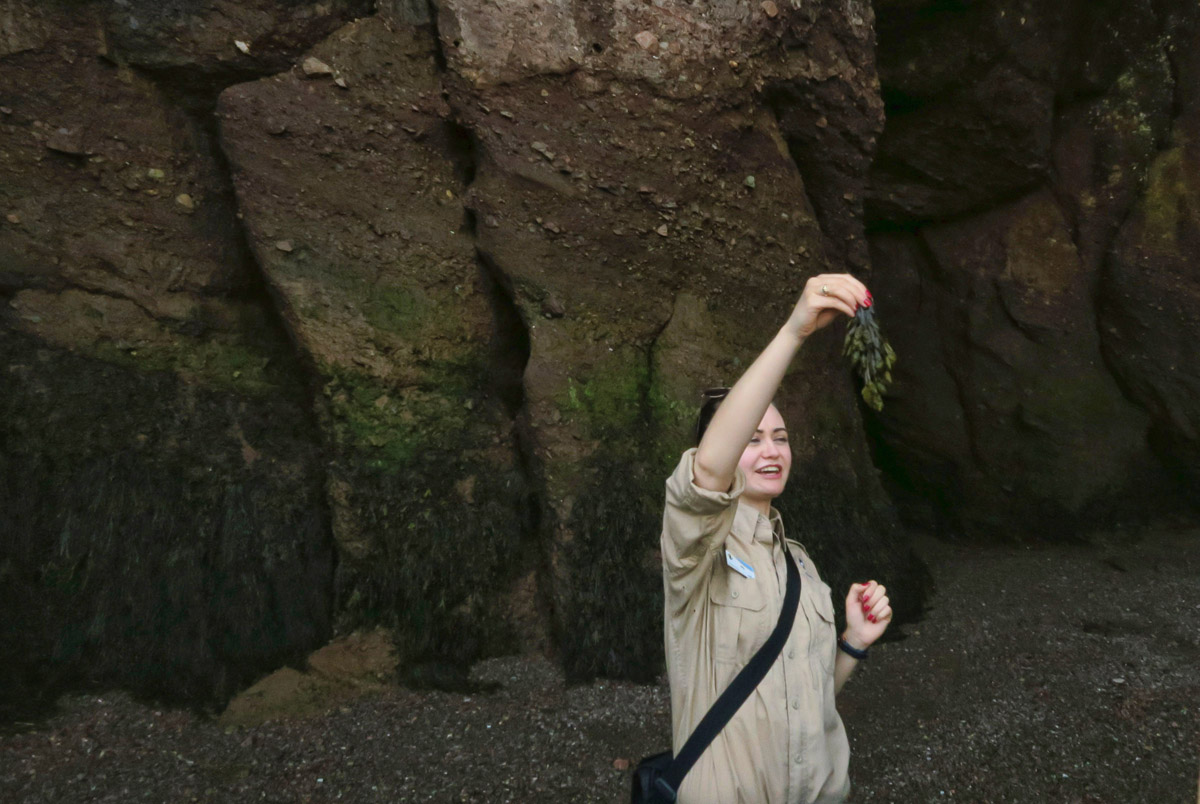 I highly recommend the interpreter’s tour at low tide. Very informative. Here, she displays “bladderwrack,” a type of seaweed used in foods as emulsifier. 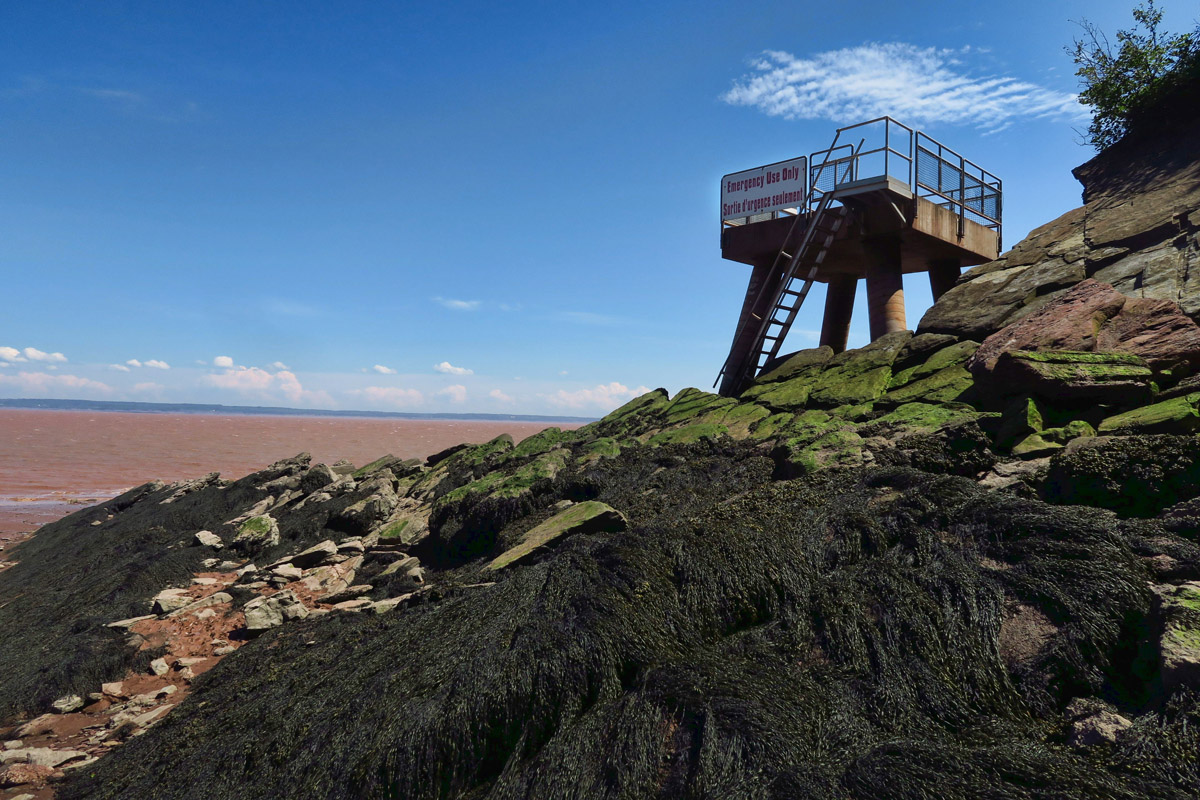 This is an emergency platform at 46 ft, in case you are missed when they sweep the beach at incoming tide. You must wait it out for 6 hours, as there is no exit from this cove. 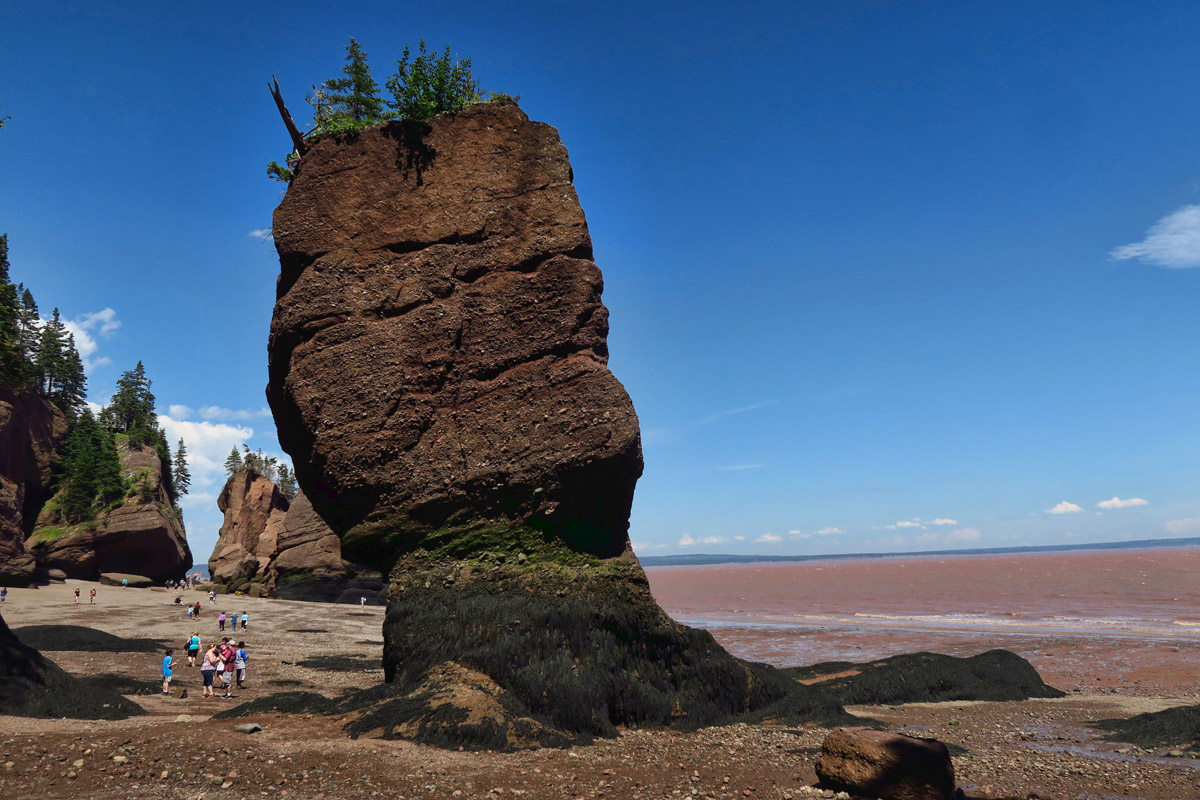 When the tide comes in, it comes fast, at 1 ft per minute.

Just at the bottom of the southern coastal trail is a small loop road with signs advertising“Cape Enrage.”   Who could resist seeing a place with such a name, even if it didn’t have a lighthouse!  This is my first test to gauge my adaptability to not having the Tracker in tow.  The road on the map is a thin pencil line.  It starts out okay, but by the time I reach the bottom of the cape, I am pretty “enraged!”   I am quickly learning of the vast dichotomy that exists between Canada’s beautifully wide, smooth highways and the horrific pot-holed, slanted side roads.  There is little in between.

The Cape Enrage lighthouse, built in 1840, has been moved three times due to erosion.  It’s the oldest active lighthouse on the New Brunswick mainland, and was once steam-operated, fueled by coal.  It emits a green flash every 6 seconds, visible for 11 miles. 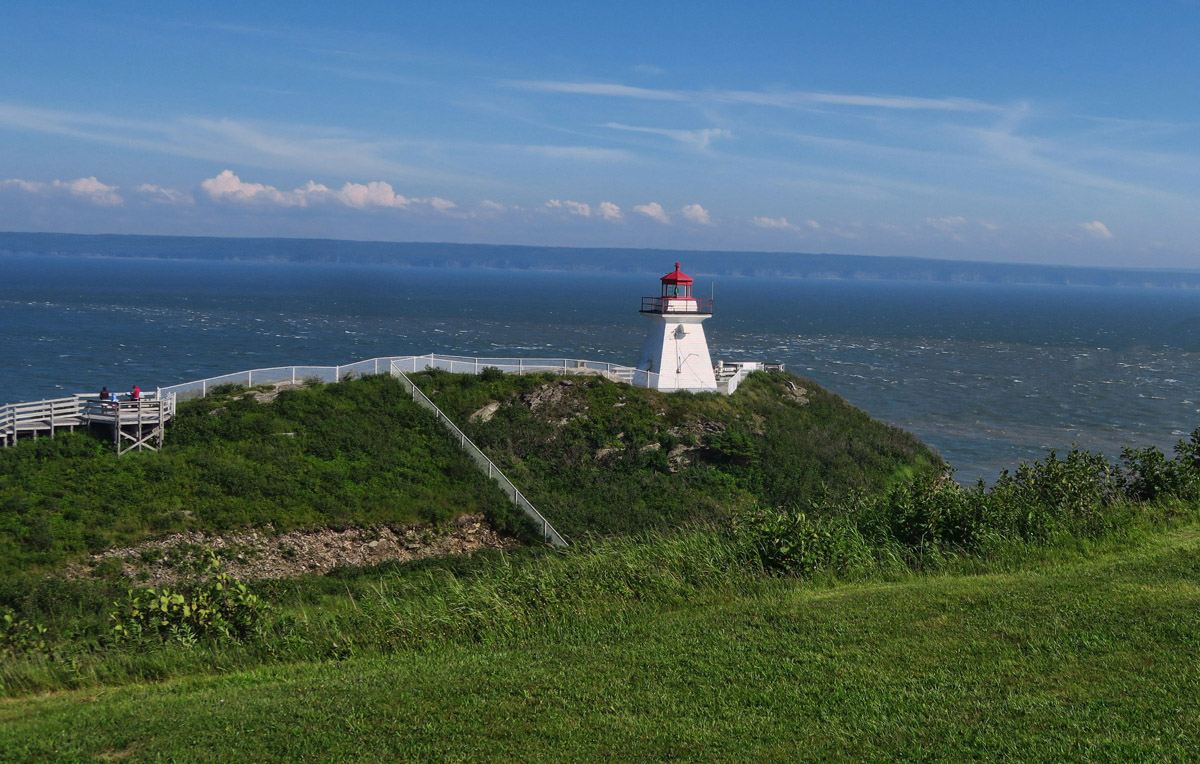 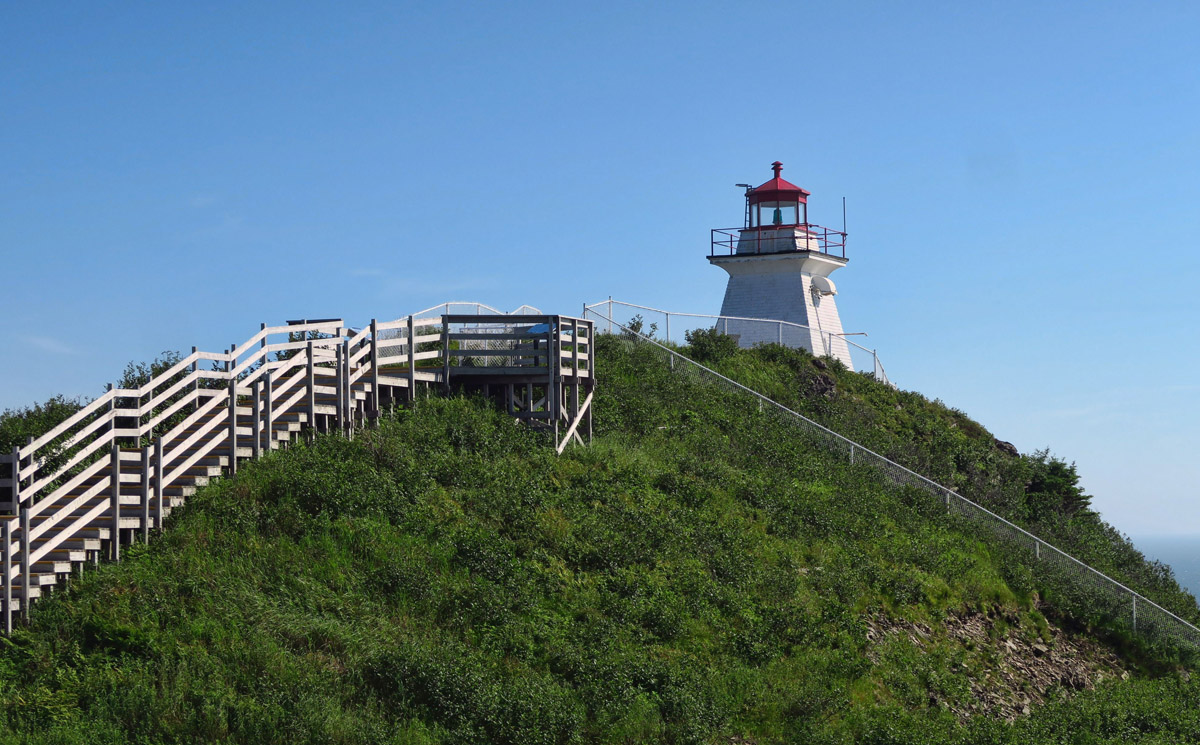 This one has a “green flash.” 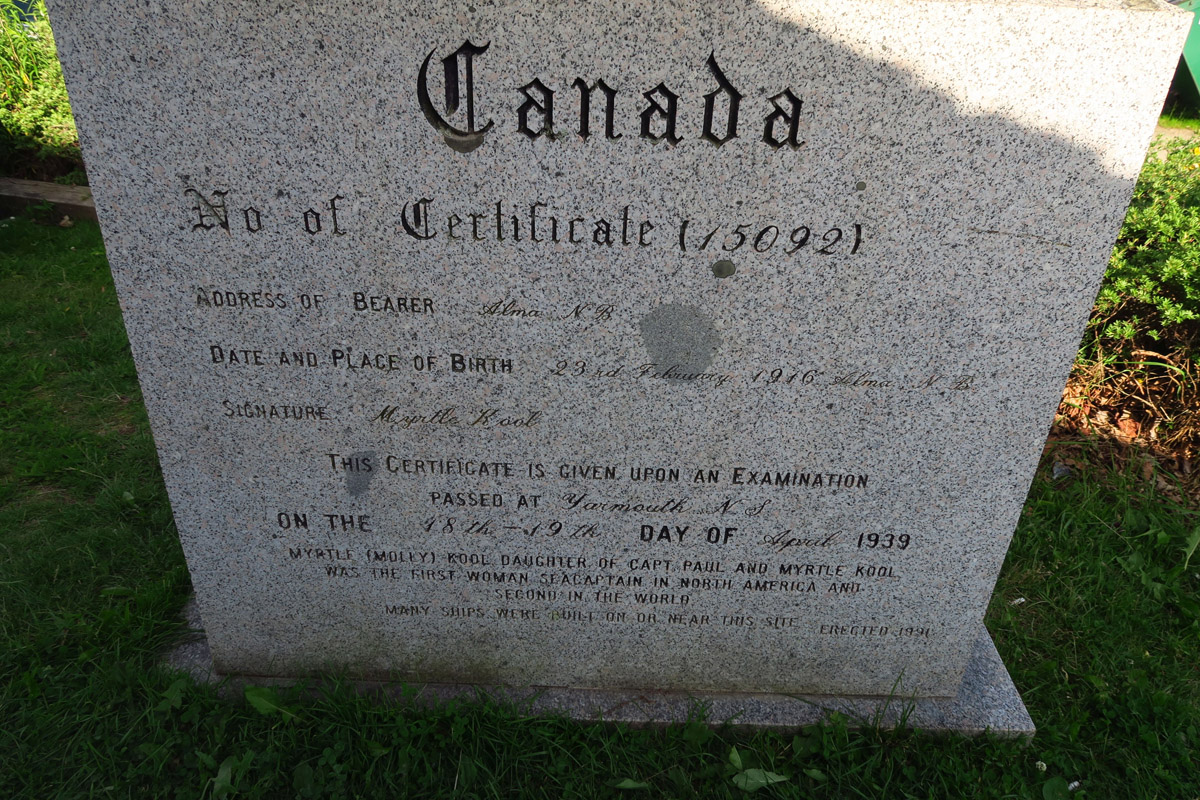 The Cape with the name “Enrage” also attracts thrill-seekers with adventure activities such as zip lining and rappelling down to the beach, both which seem a bit out of place on the grounds of a lighthouse, but a portion of the $5CAD admission fee goes toward the preservation of the lighthouse.

Situated just in between the end of the road to Cape Enrage and the Fundy National Park sits the tiny coastal village of Alma where the population of lobsters exceeds people.  My stop at the New Brunswick Visitor Center nets the advice, “Don’t miss the lobster restaurants in Alma.”   She recommends the Alma Lobster Shop, because it is “fisherman-owned.” 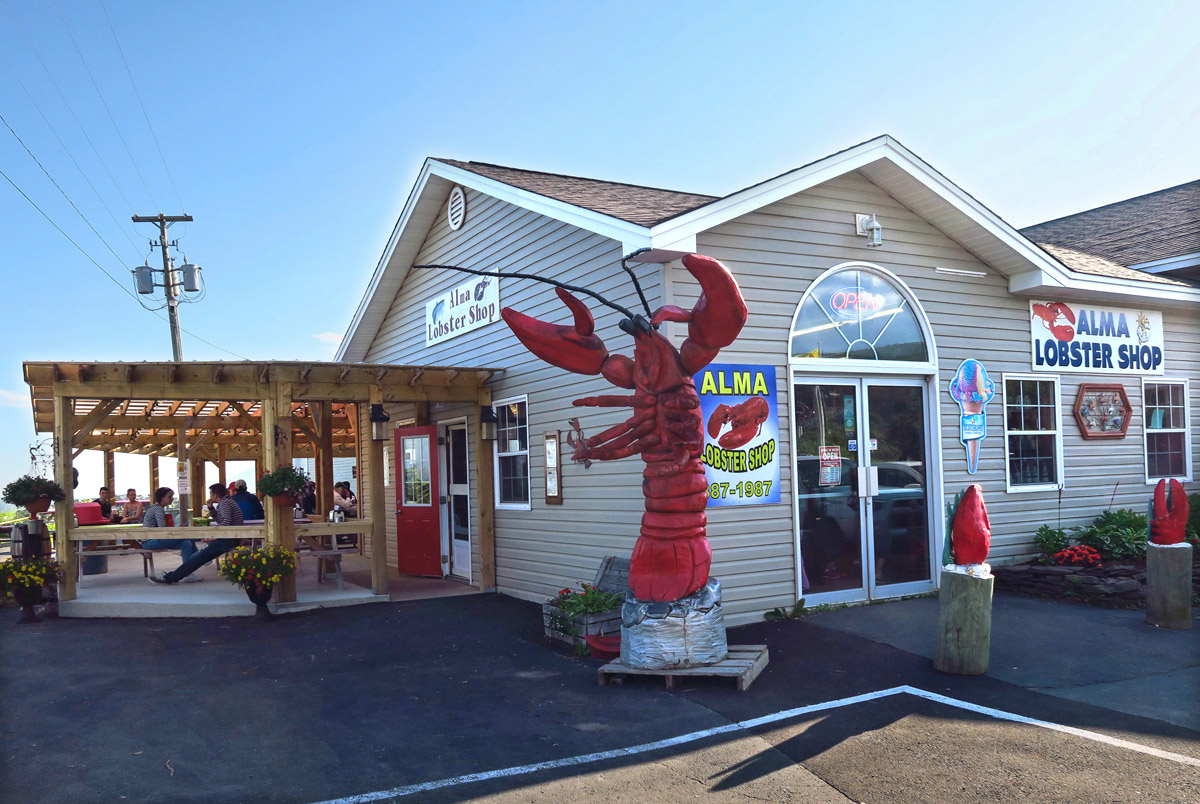 Alma Lobster Shop sells lobsters sold off their boats just behind the shop. 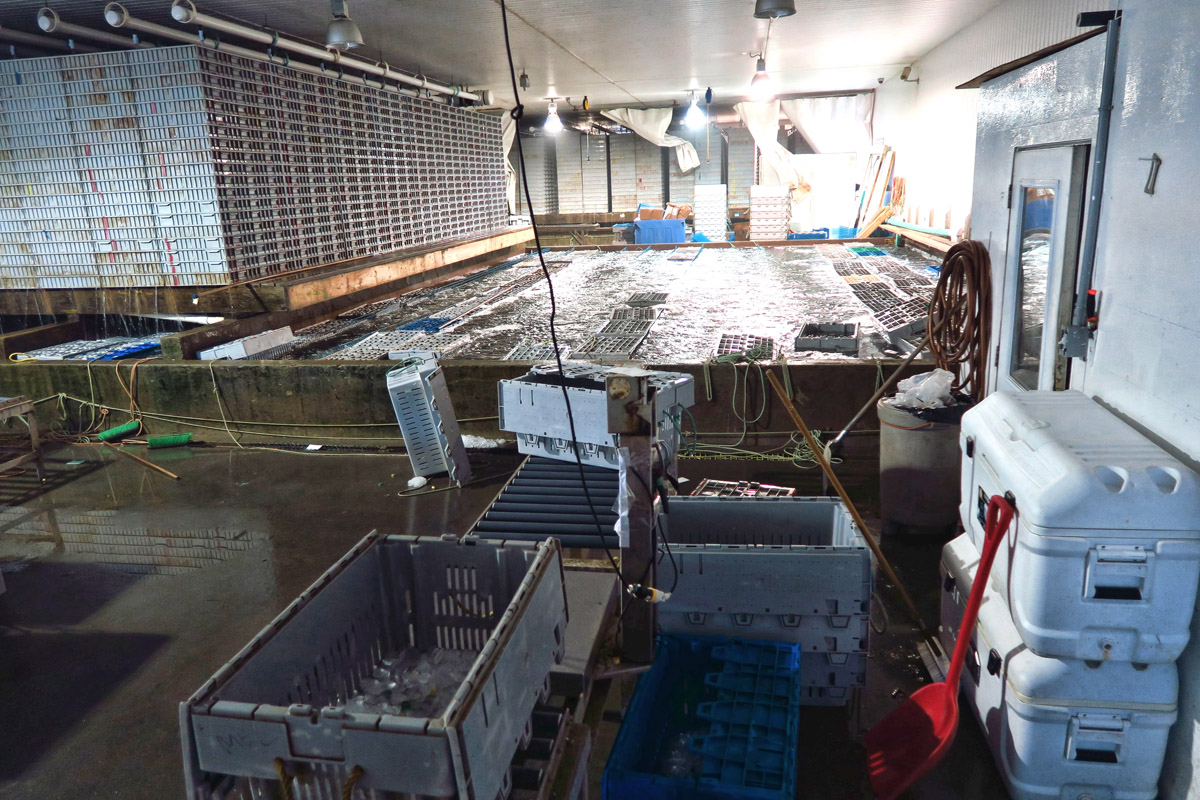 They are also distributors worldwide. Inside this large storage room, so cold I can see my breath, over 400,000 lbs of live lobsters await shipment as far away as Japan. 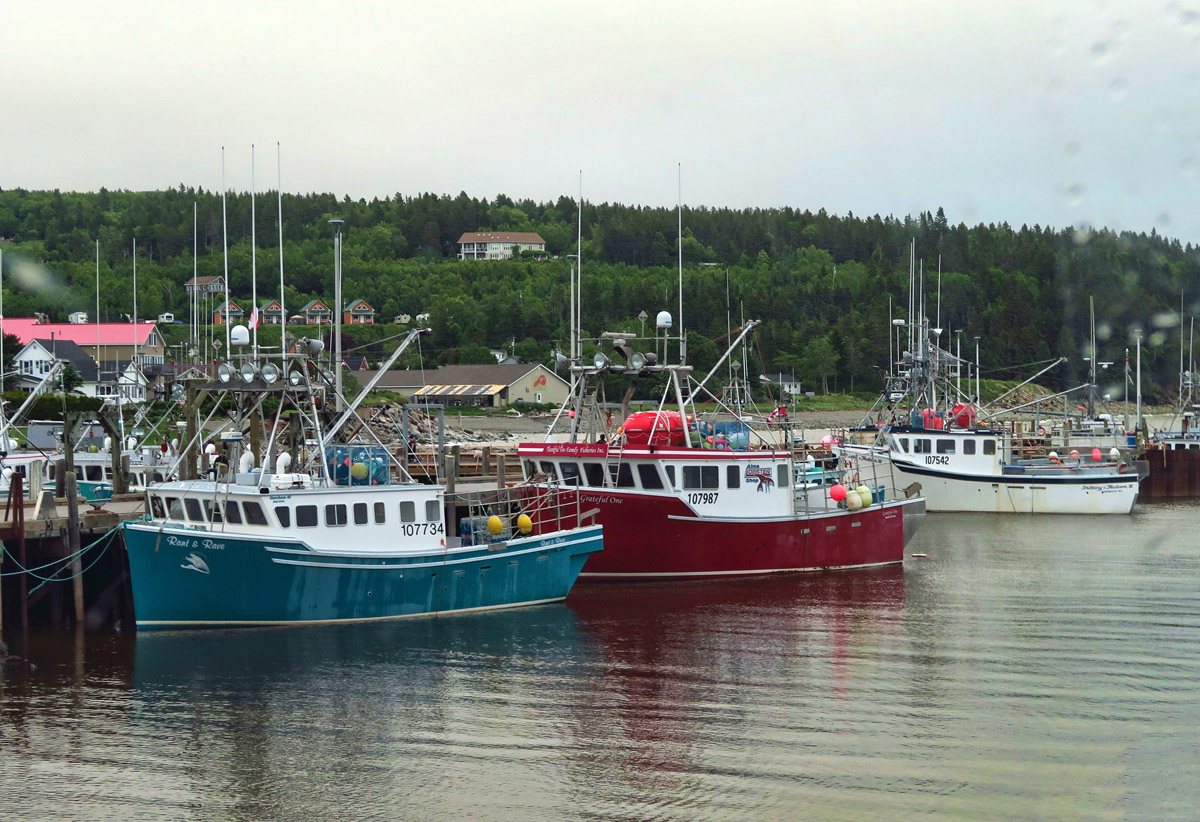 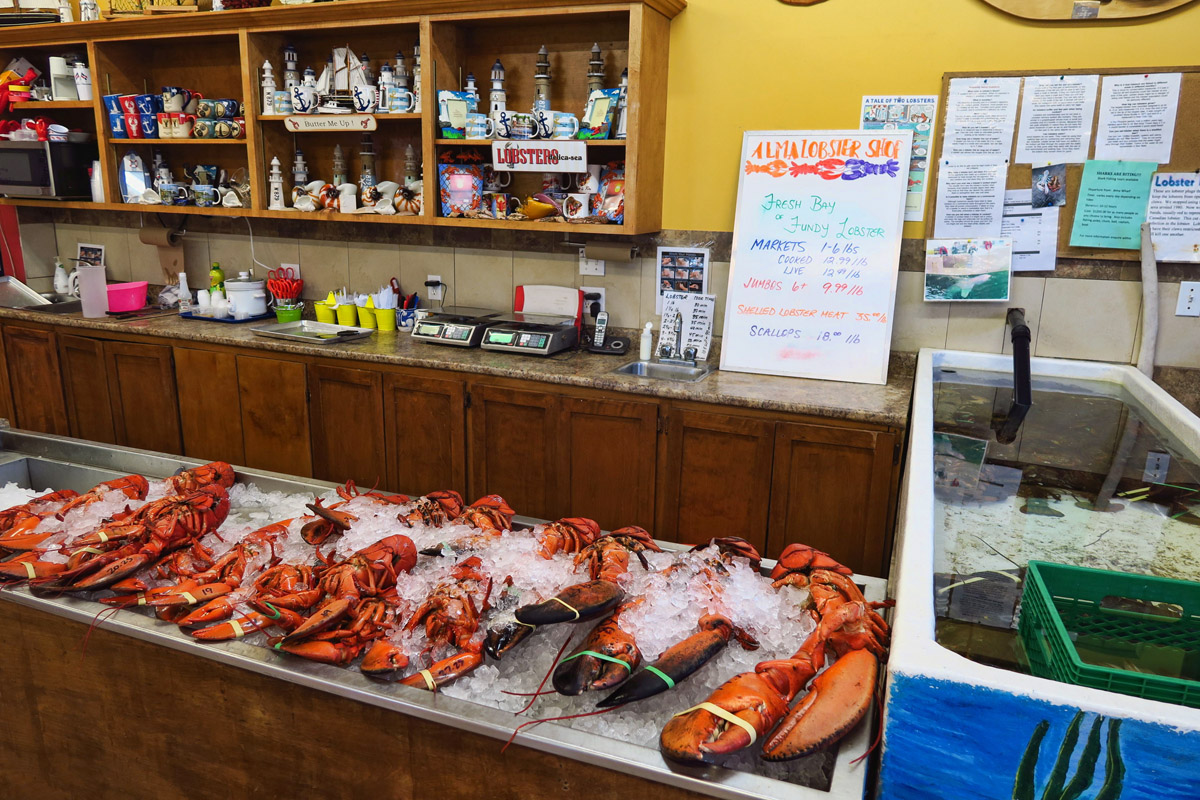 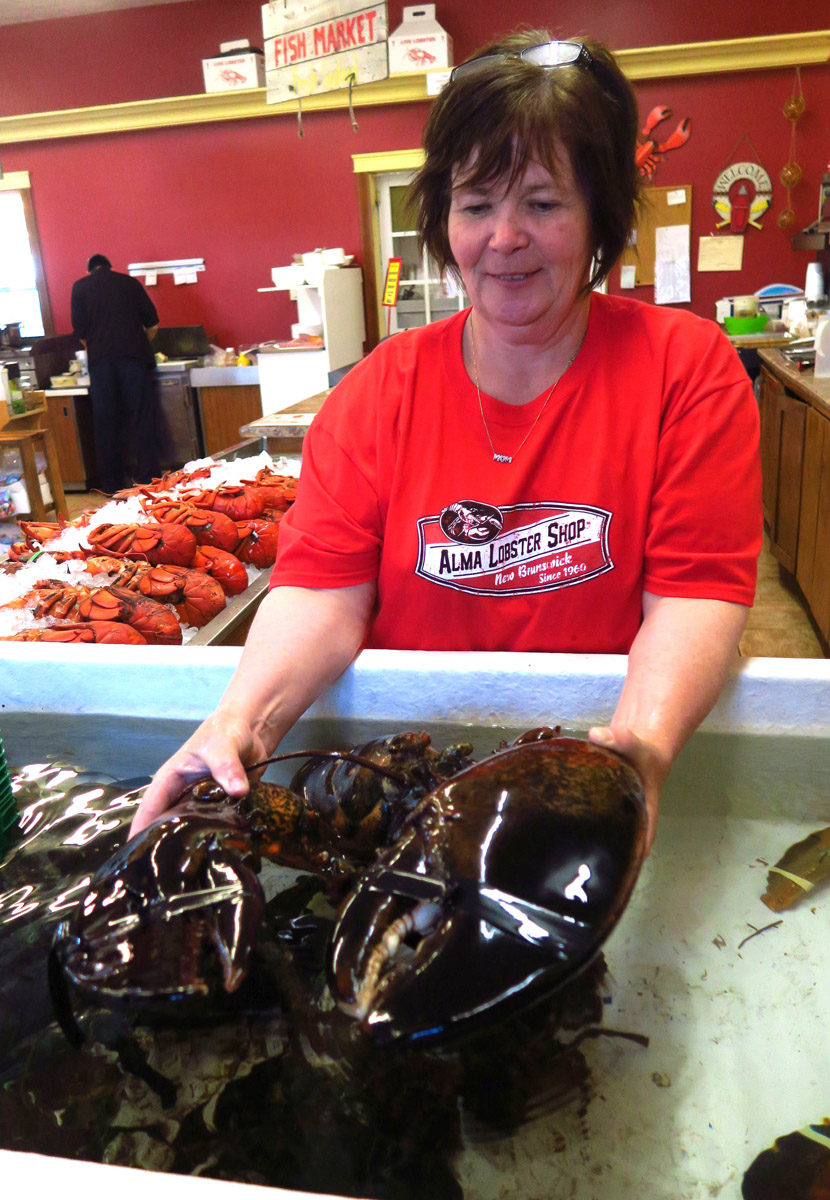 Since this is a fisherman’s shop, they have a bit of a living lobster museum. 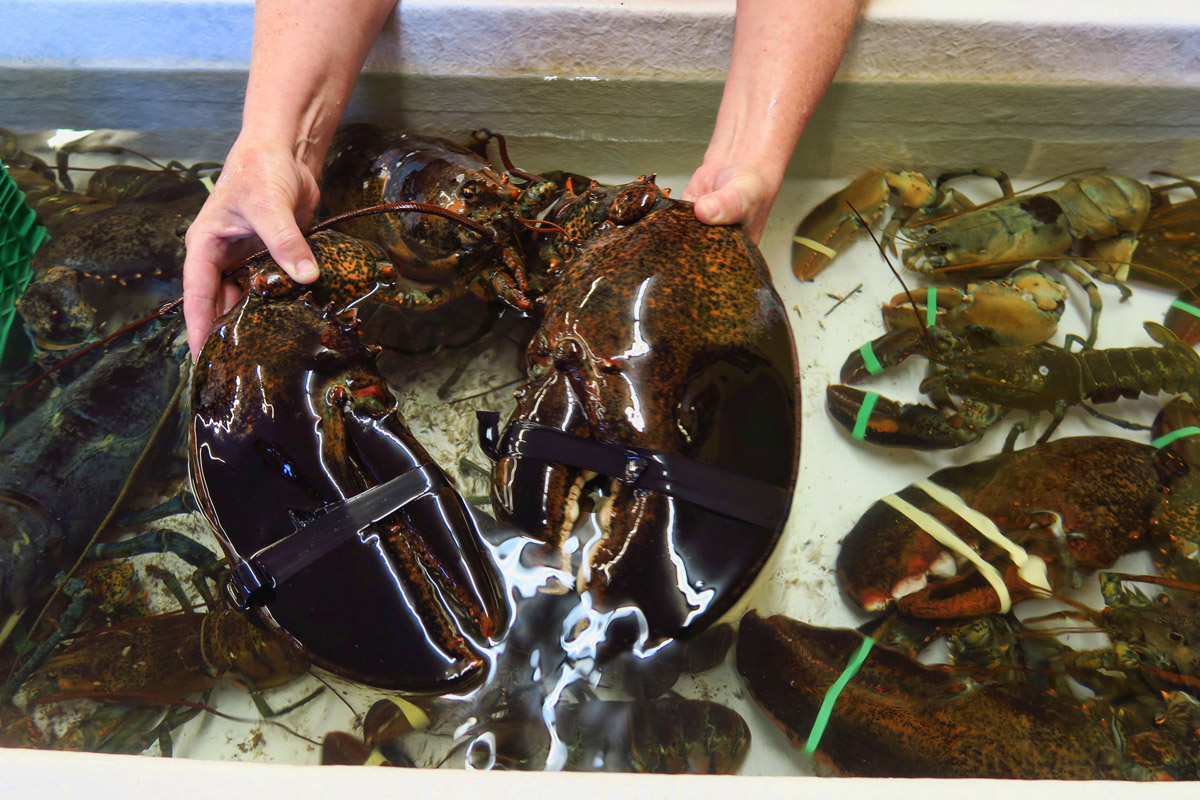 This guy was estimated to be between 80 and 100 years old. Seeing the size ratio of this tank could make me a vegetarian. 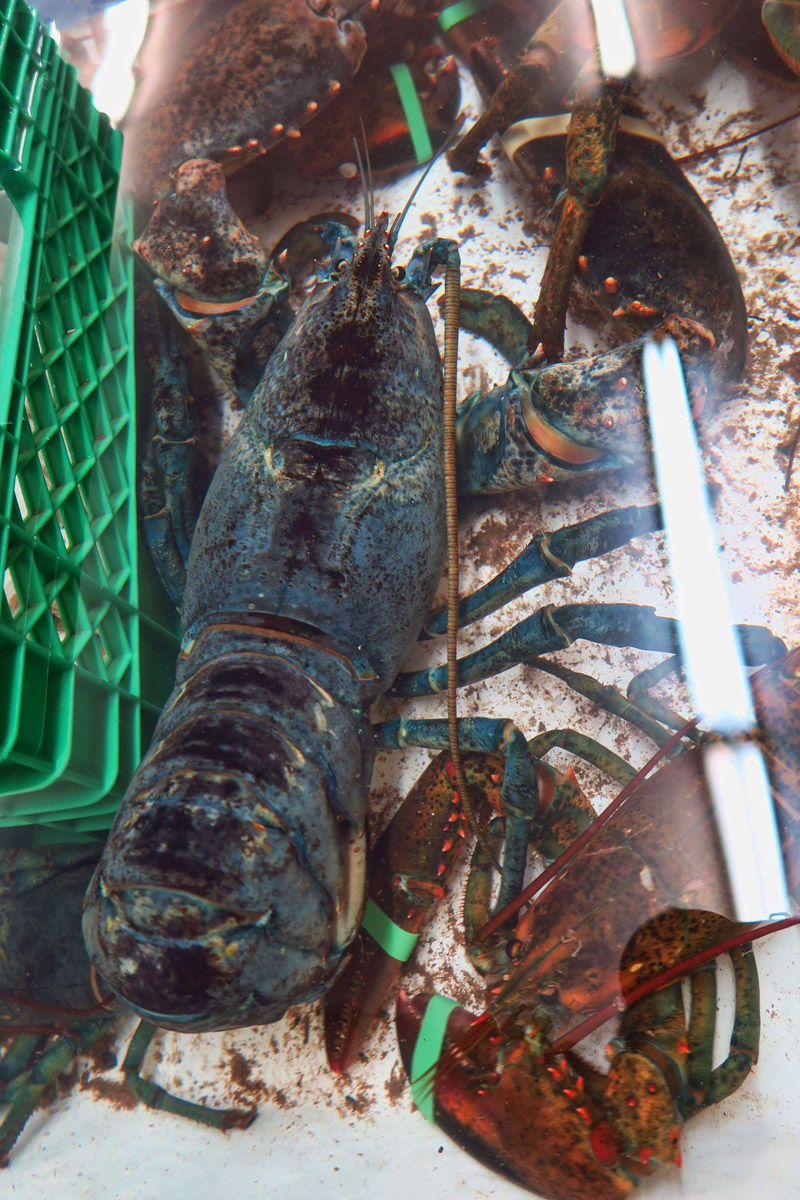 A rare “blue lobster.” Odds are one in two million. 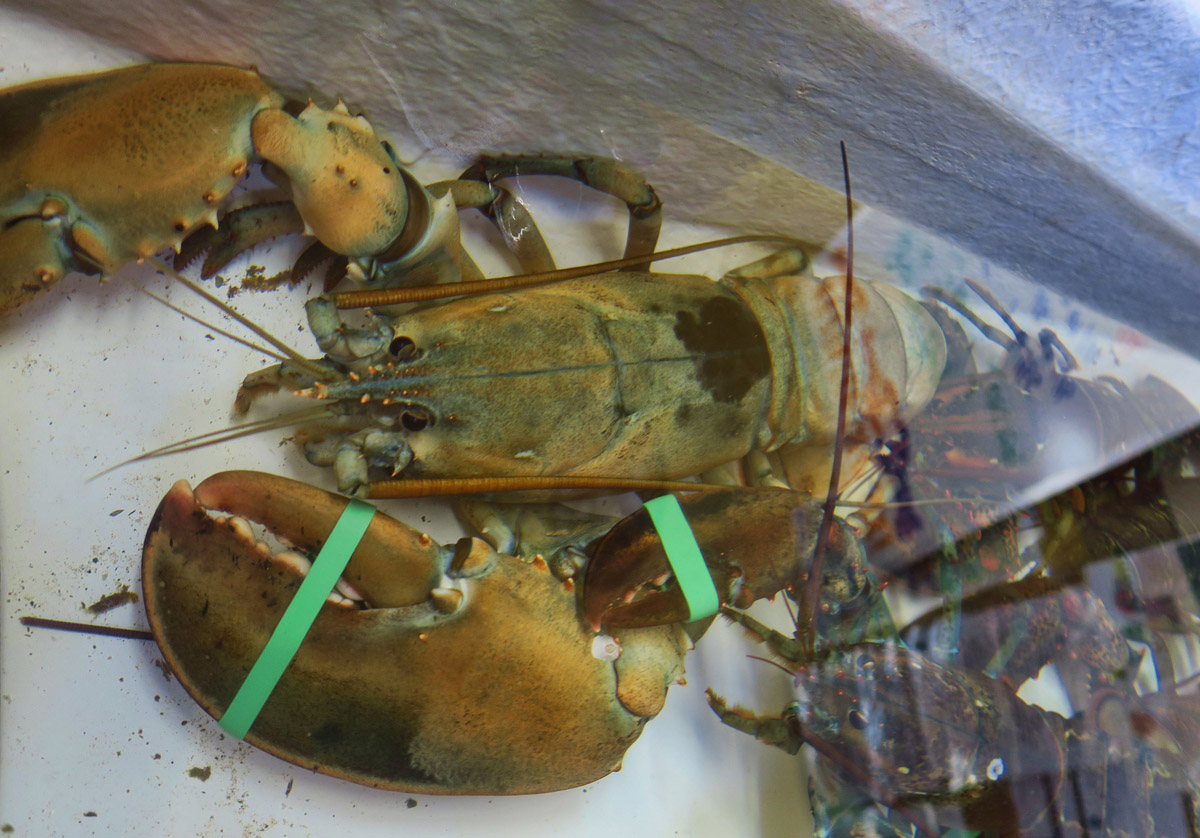 There’s lots to see in this one area.   Judging from my drive-through of Fundy National Park, there are lots of beautiful hike and bike trails in this park.  But if you plan to visit, I recommend advance reservations.  At least during Canada’s 150th Anniversary.  National Park 1, Winnie 0

7 thoughts on “Fun Day on the Bay of Fundy”