For as long as I can recall, I have always been passionate about train travel, from early childhood riding the miniature train through the Fort Worth Forest Park Zoo, to my longest ride yet, the TranSiberian Railway from Moscow to Beijing.   Still, I can’t get enough.  There is just something about the rhythmic cadence of the tracks, riding through scenery unspoiled by billboards and 18 wheelers.  Not to mention the romantic setting of which mystery movies and spy novels are made.   Even my favorite Joni Mitchell song, “Just Like this Train” is about a train ride.  So I rarely miss an opportunity to, as Joni would say, “settle in to the clickety-clack with the clouds and the stars to read.” 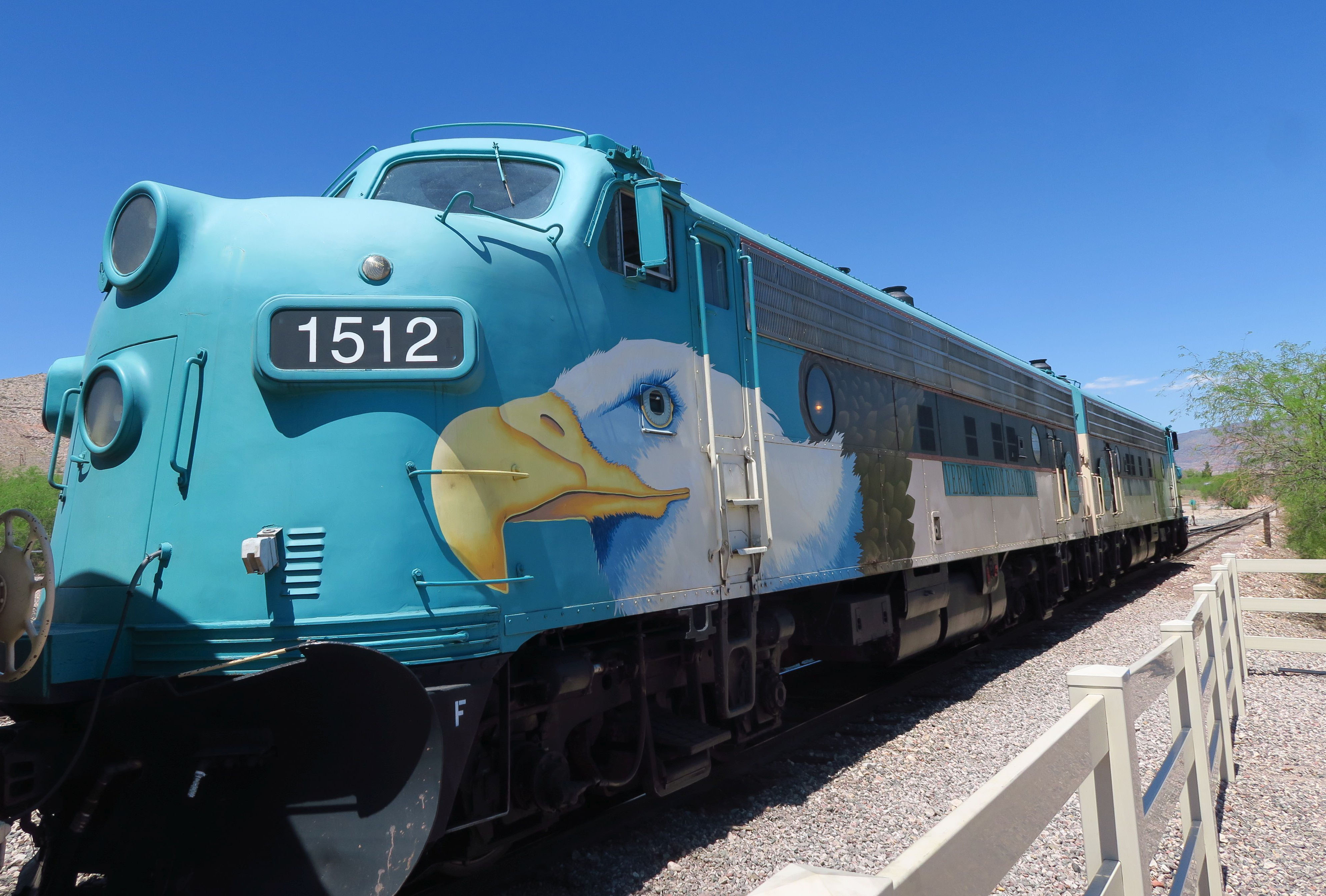 One of the two FP7 locomotives that will be pulling us down the track…two of only 10 remaining in North America. 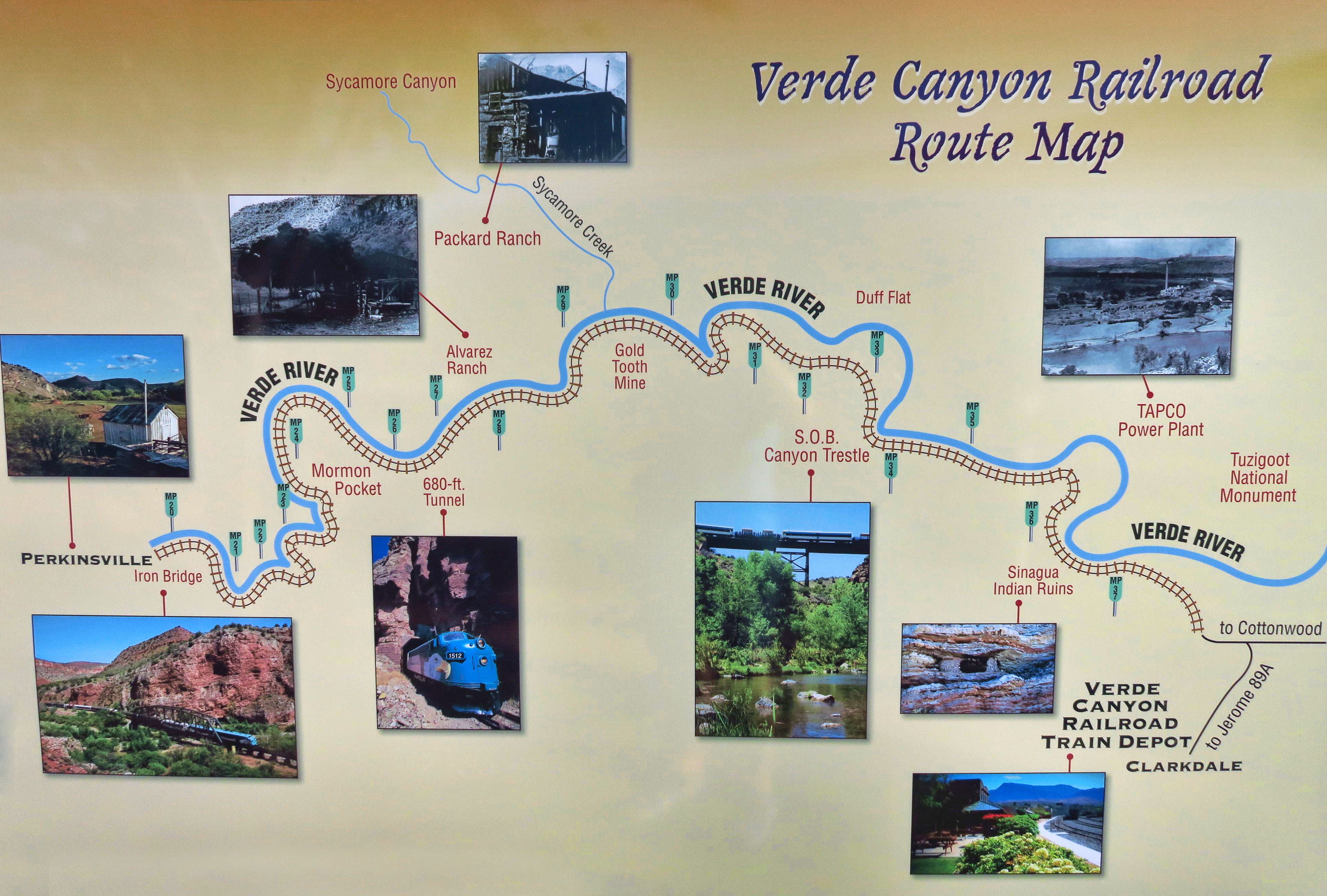 It’s not exactly a straight line from Clarksdale to Perkinsville. We’ll follow the crooks and turns of the Verde River. 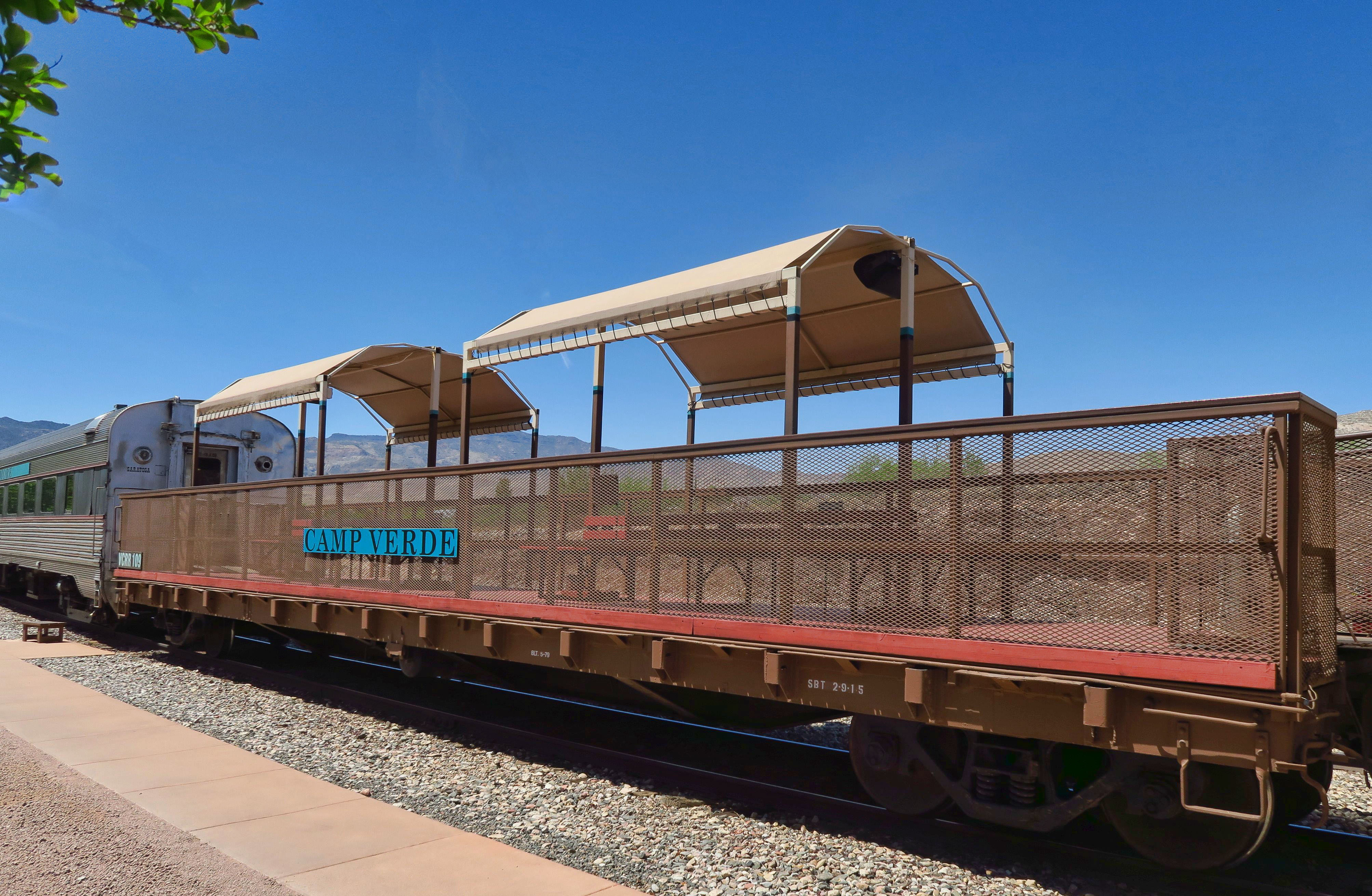 These outdoor viewing cars are sandwiched between all the passenger cars.

In the most unlikely of places, Clarksdale, Arizona, is the Verde Valley Railway. Yes, it’s a tourist train. And although I much prefer a “destination train,” I will settle for a chance to ride the rails any day. Besides, it’s billed as a way to see the Sedona area as it looked before all the development!

And if that isn’t reason enough, it’s a great way to escape the desert heat for the afternoon. It’s been a crazy spring in Arizona, with wild swings from the mid 90’s to sleet in the foothills, all within the same week. So it’s been tough to predict the sweet spot. I certainly missed it in Camp Verde. Although cooler temps are on the way, it’s a 90 degree day when I board my air conditioned restored railway car named “Sedona” for the ride into the Verde canyon. 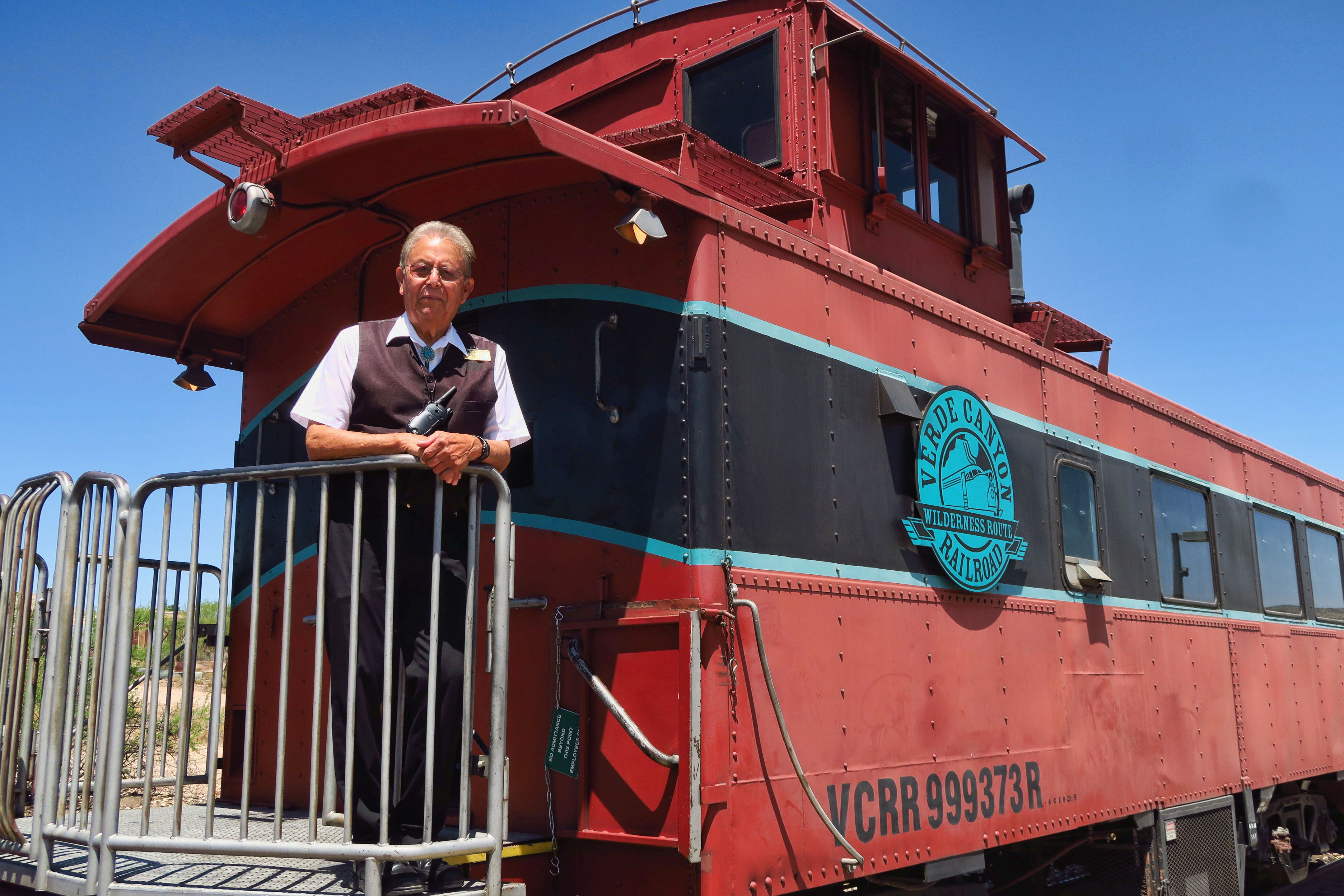 This is Fermin (pronounced “Fer-MEAN.”) As host of the Caboose, he has been working this route for 17 years. Fermin is nice enough to invite me in for a tour before the train departs. 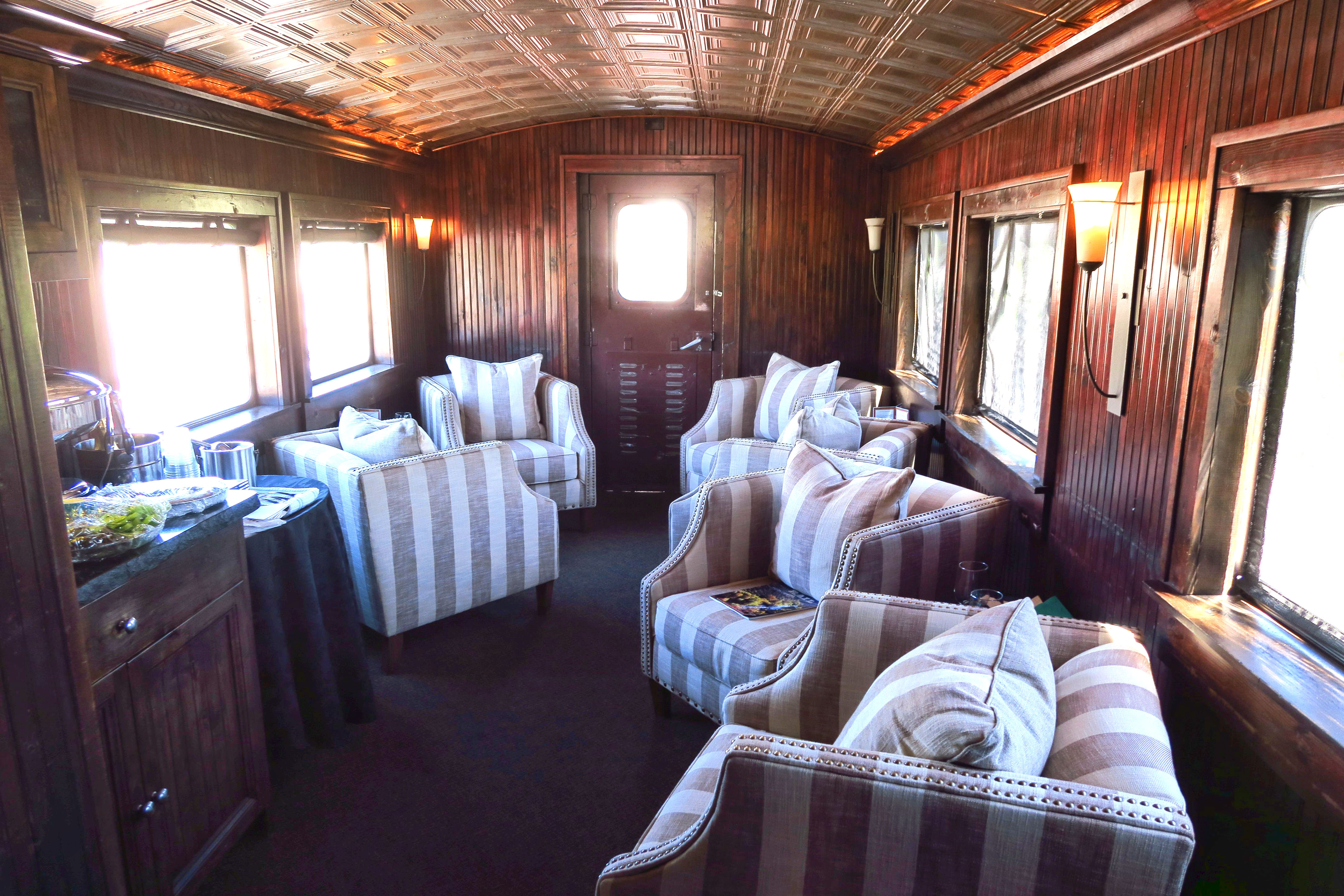 This is the way to go! The Caboose can be rented for a mere $700, but if you can scrape five other friends together, that’s only $25 more than a First Class ticket! And the six of you get your own private lounge. 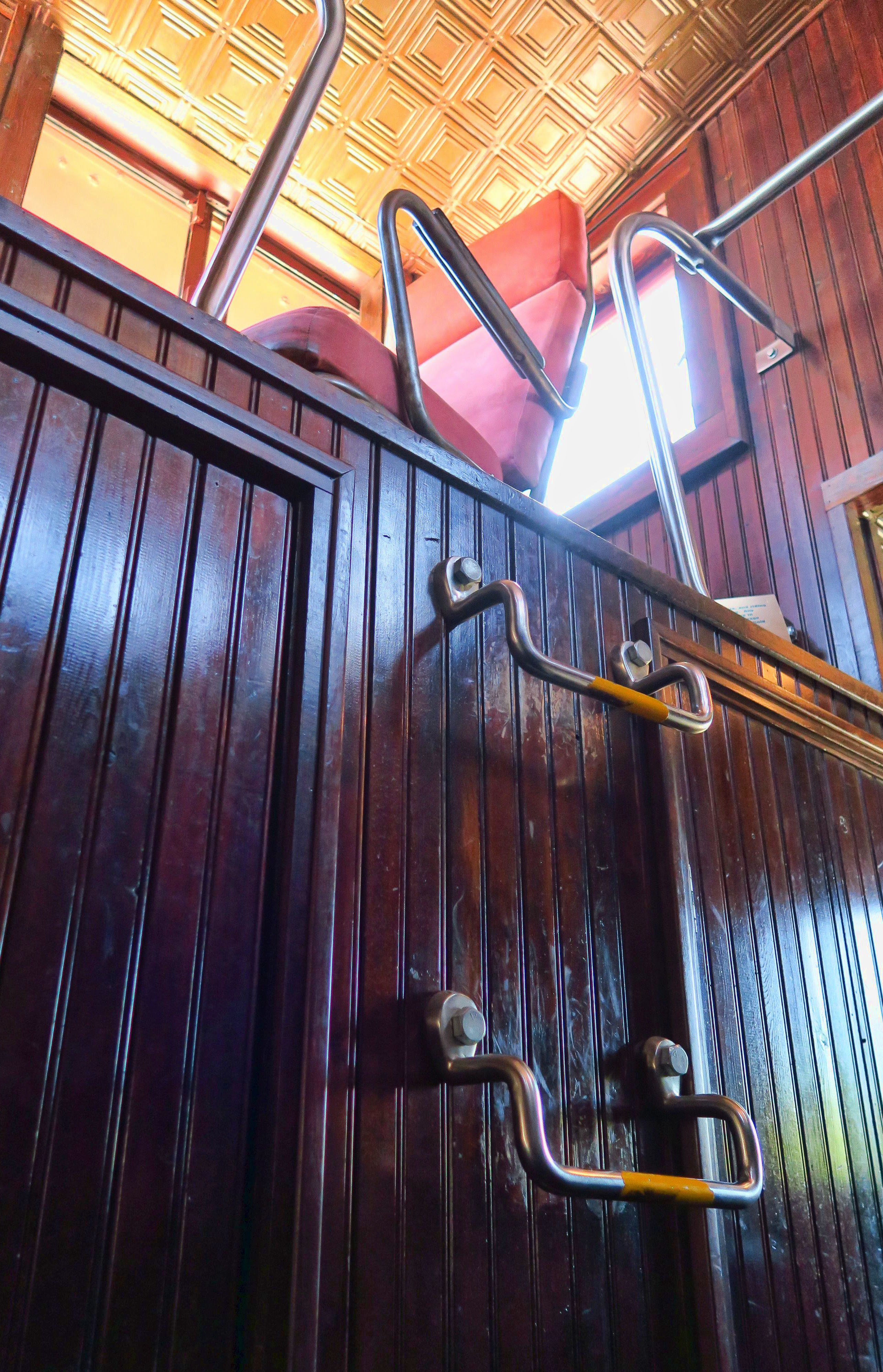 The caboose also has two seats up in the “cupola,” the little raised enclosure where you can look out over the top of the train.

The original 38 mile railway was laid in 1911, the purpose being transport of miners and mining materials. A portion of the standard gauge tracks was converted to a passenger train in 1990. The 20 mile ride will travel into the canyon for about two hours to reach the turn-around point at the ghost ranch of Perkinsville for a total of four hours of train time. In route, we will traverse a trestle over a 175 ft gorge called the “SOB Canyon,” and travel through a 680 ft man-made tunnel. 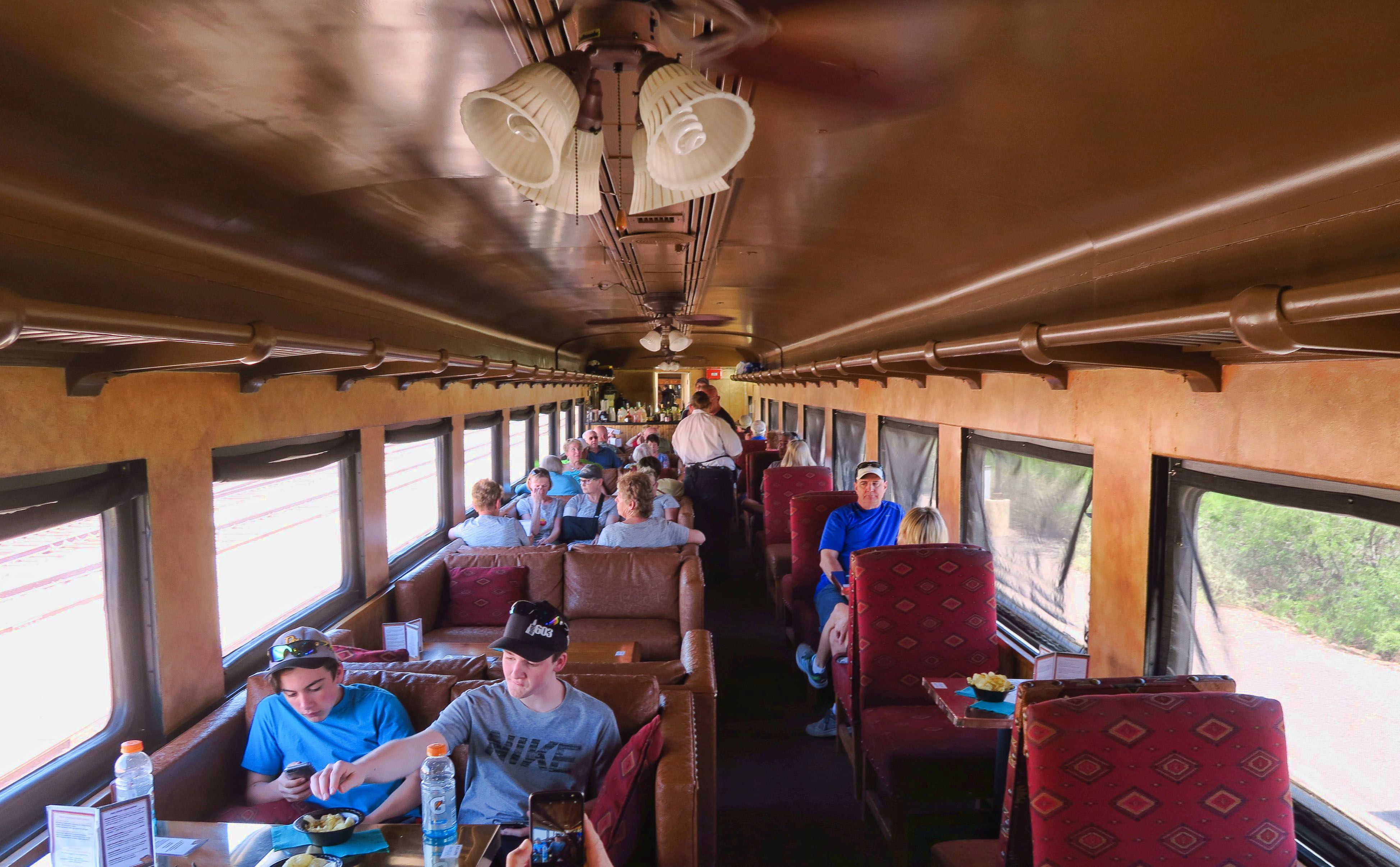 The First Class car offers “livingroom-style” seating. That means two-by-two couches on the left, single table seats on the right. 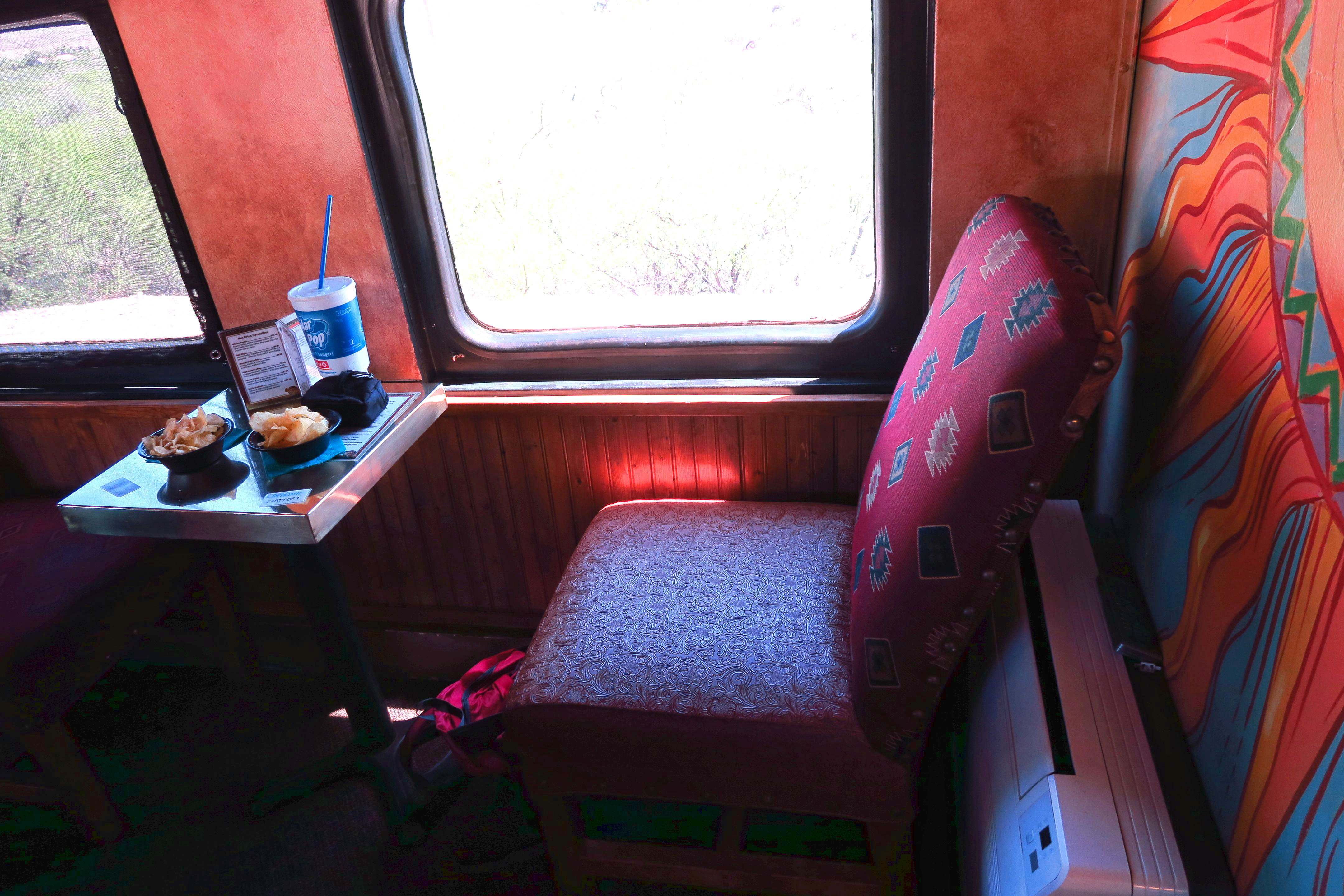 This is my seat for the four hour ride. I like being at the end, so I have no one bumping my chair from behind. 😉 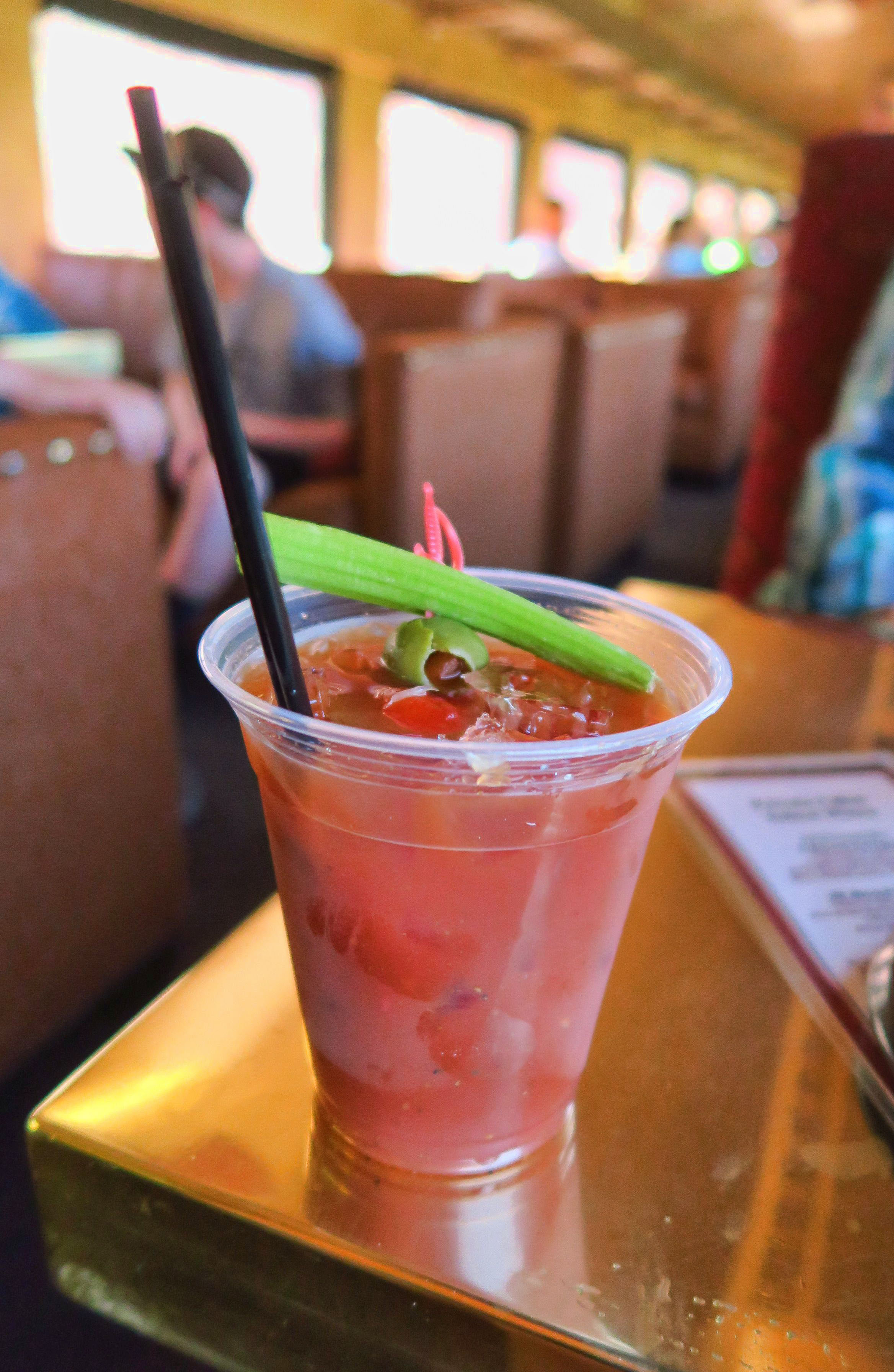 It’s a Bloody Mary morning…or rather afternoon. Helps take the edge off the Johnny Cash tunes.

I decide to splurge on a First Class ticket for several reasons. First of all, no outside refreshments are allowed on the train. For $25 more, you get “snacks” (hot chicken wings, sandwiches, a vegetable platter, and brownie bites) and a champagne toast. Also, First Class cars only hold between 25-40 people, whereas the coach cars hold up to 75 people. So less competition for the bathroom, the bar, and outdoor viewing space. But the deal maker for me is having single-side seating in the First Class car. There is only one thing worse than sitting two by two on a coach class bench seat for four hours….that is doing it next to a total stranger. So the $25 is money well spent to have my own “elbow room.”

On a side note, if you opt for the First Class car and think “I’ll wait to get my snacks until the line dies down,” don’t expect there to be anything left but a few celery sticks and some sandwich ends. Especially if there are teenage boys on board! He who hesitates goes hungry. 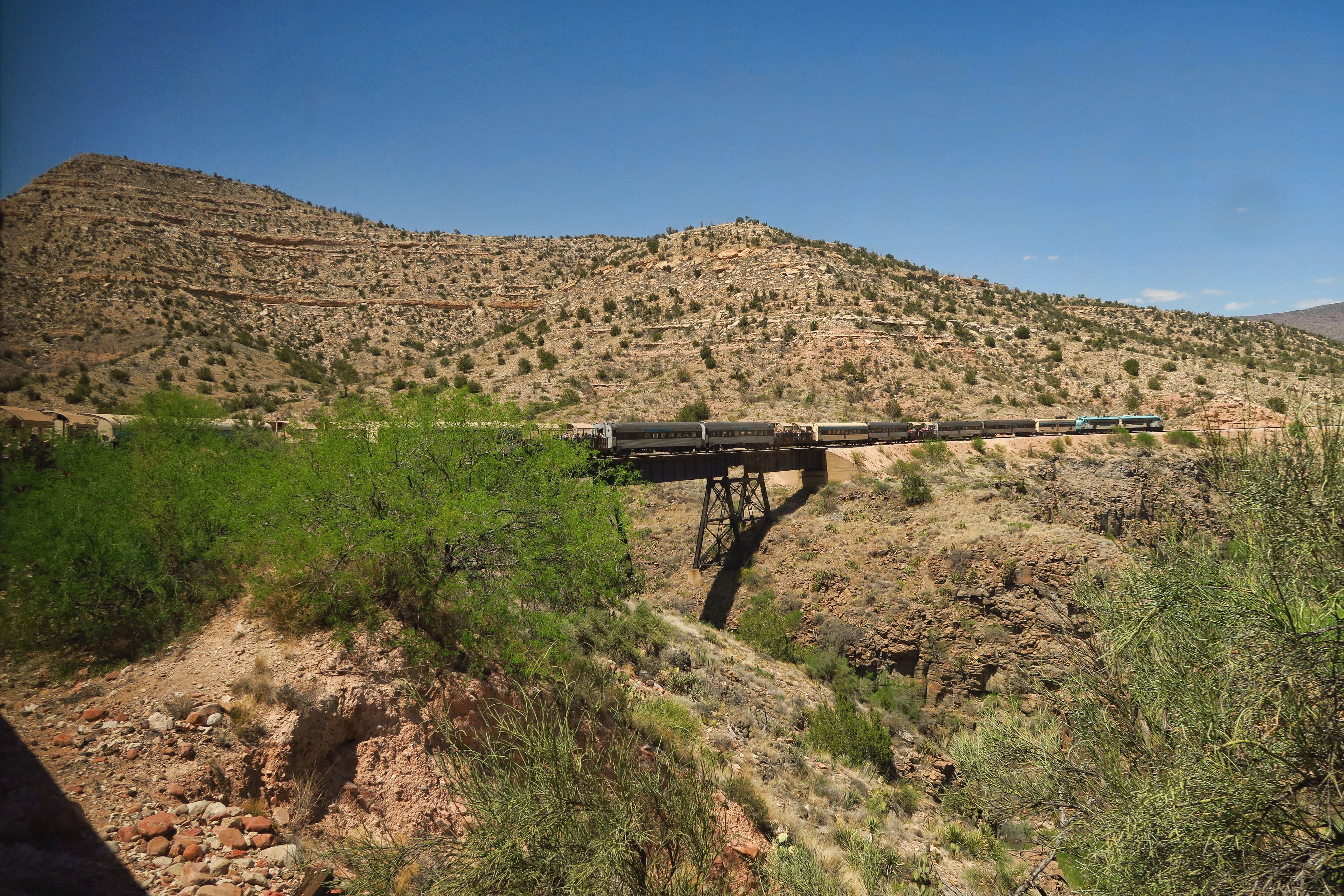 Not much in the way of scenery as we first start out, though it is cool seeing the front of the train as it follows the twists and turns of the track. 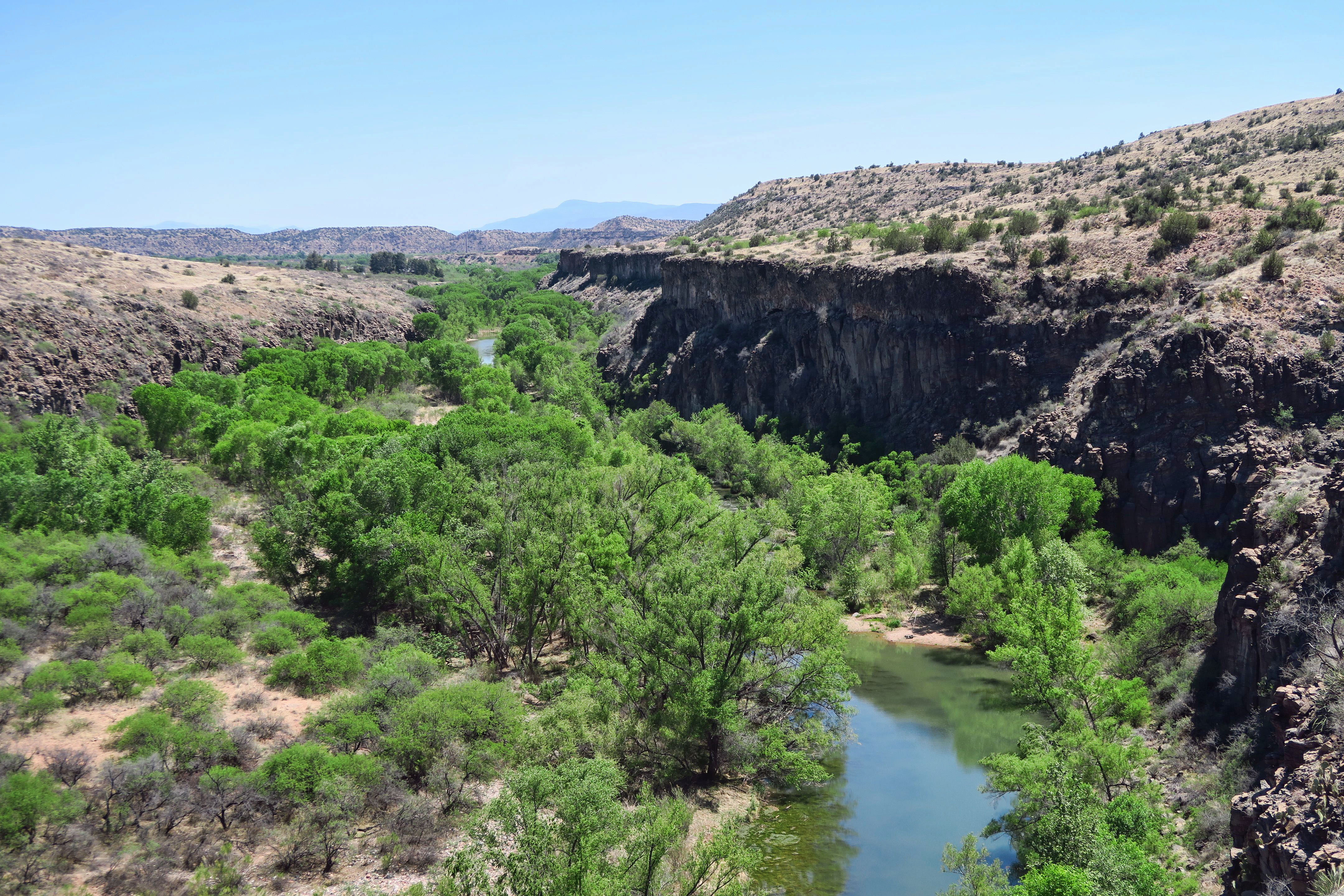 The train follows the Verde River for a good portion of the ride. 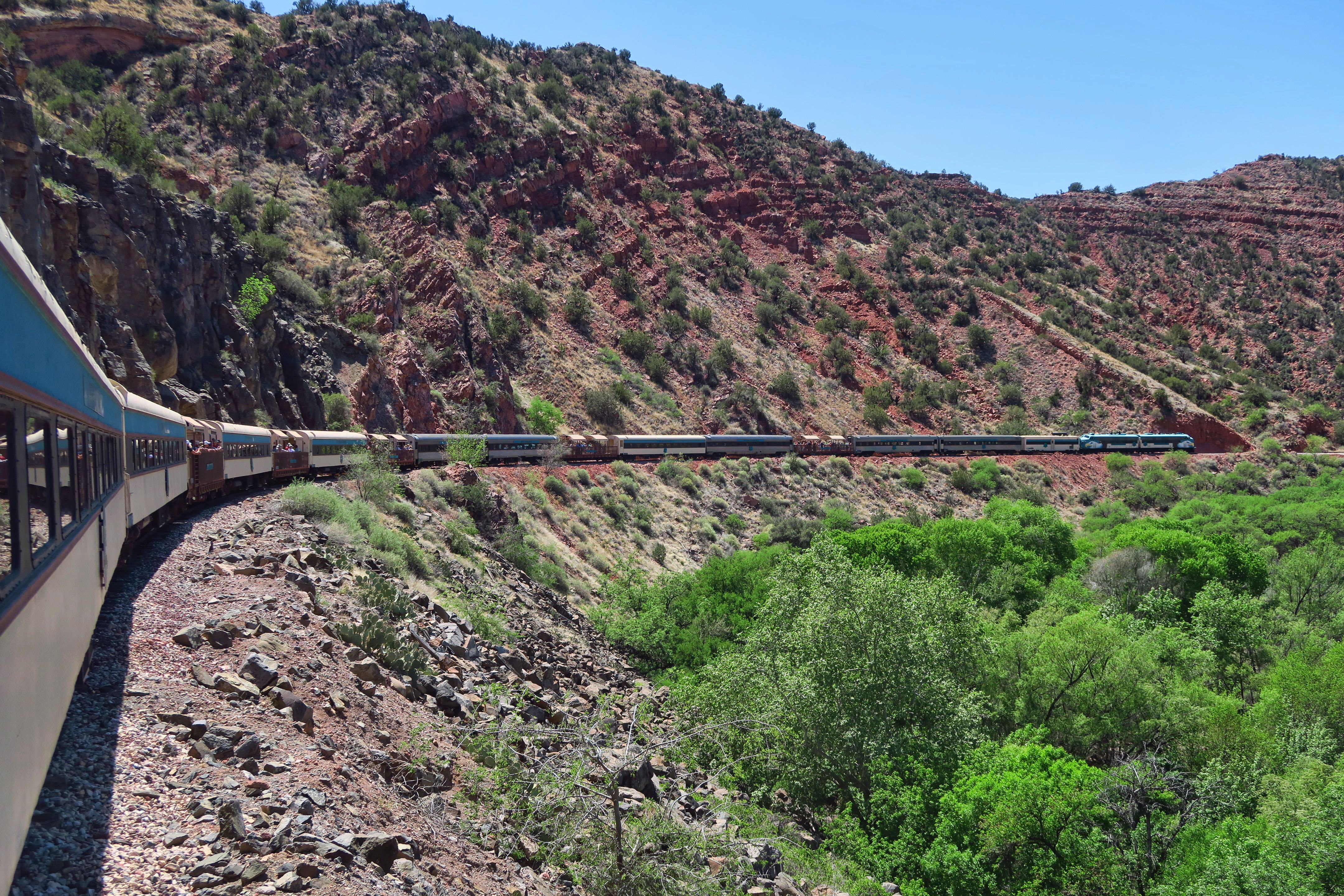 Sitting near the back, one gets a full length view of the train at every turn.

Each car alternates with an outdoor car where one can step outside for wider viewing. This would typically be my preference for the entire ride. But it’s so darned hot now, and I’ve been roasting in the Winnie toughing out this latest heat wave, so decide to luxuriate in the AC for as long as possible. The railway has adapted the old adage, “It’s not the destination but the journey” as their brochure slogan…so I intend to make the journey in the coolness of the rail car! Besides, although beautiful, the scenery is not exactly the Rockies… 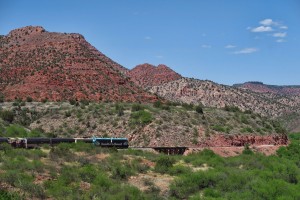 At long last, the red rocks come into view. 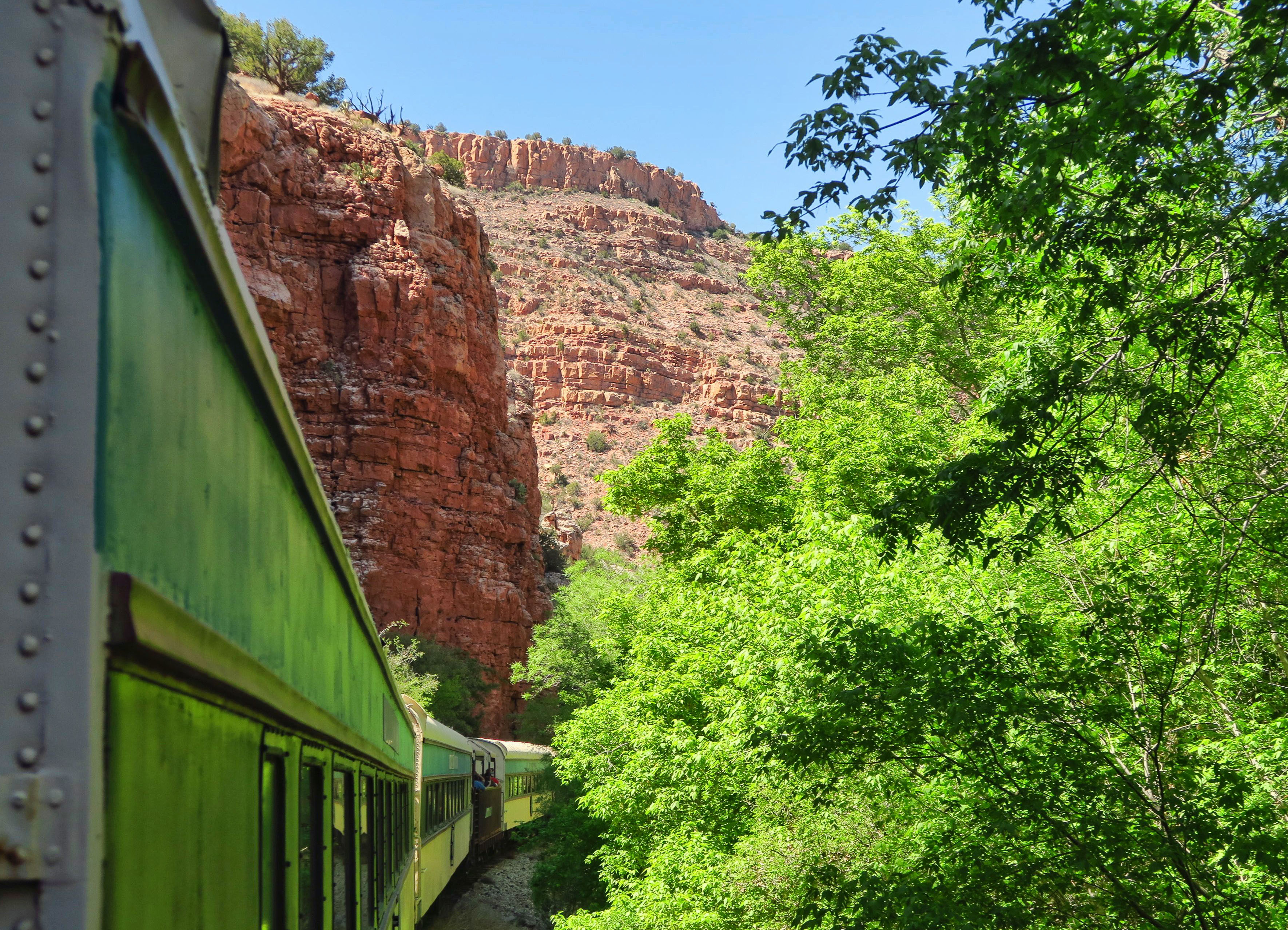 Although there are no formations like you see in Sedona, the canyon is admittedly scenic. 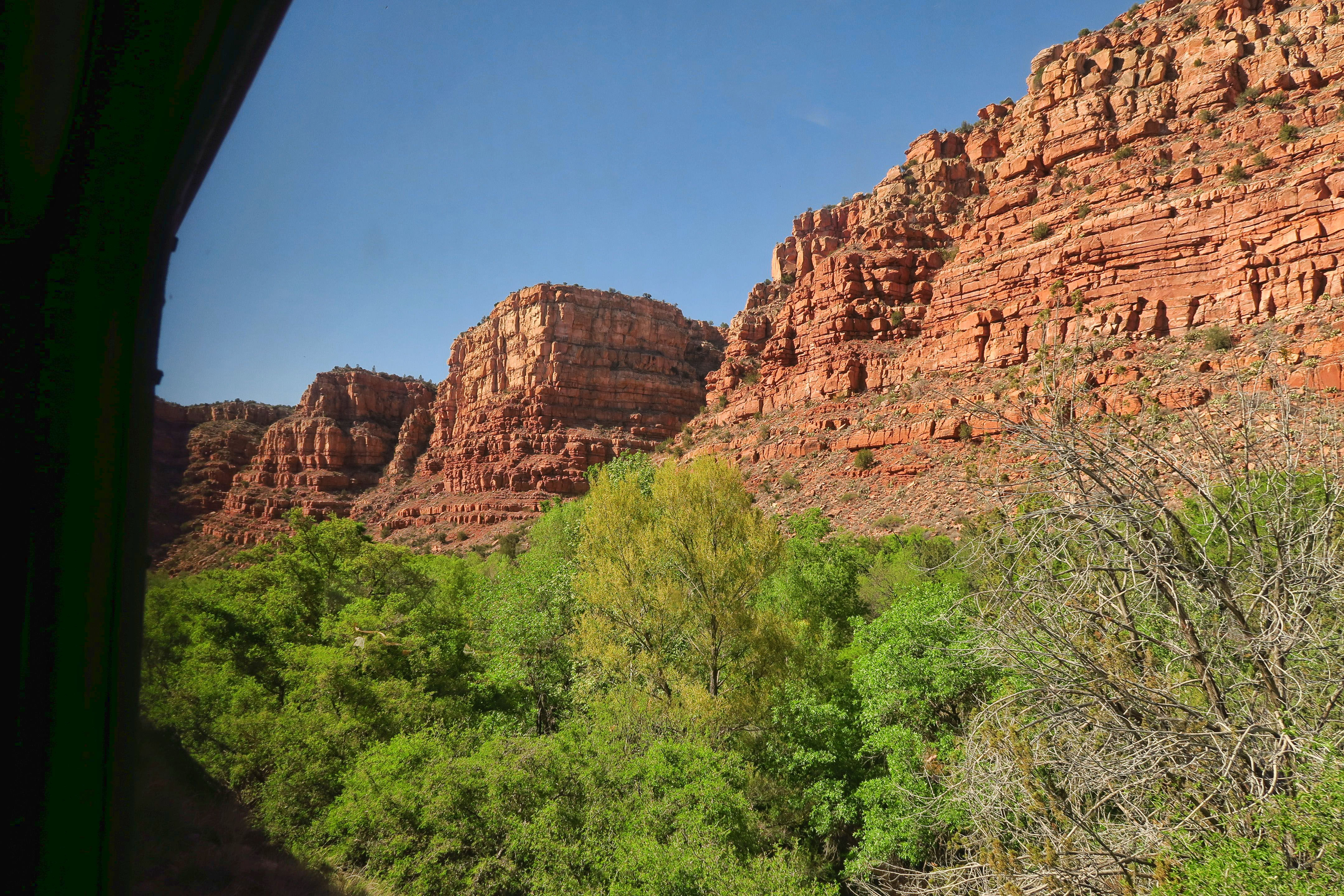 View from my seat out my panoramic window. 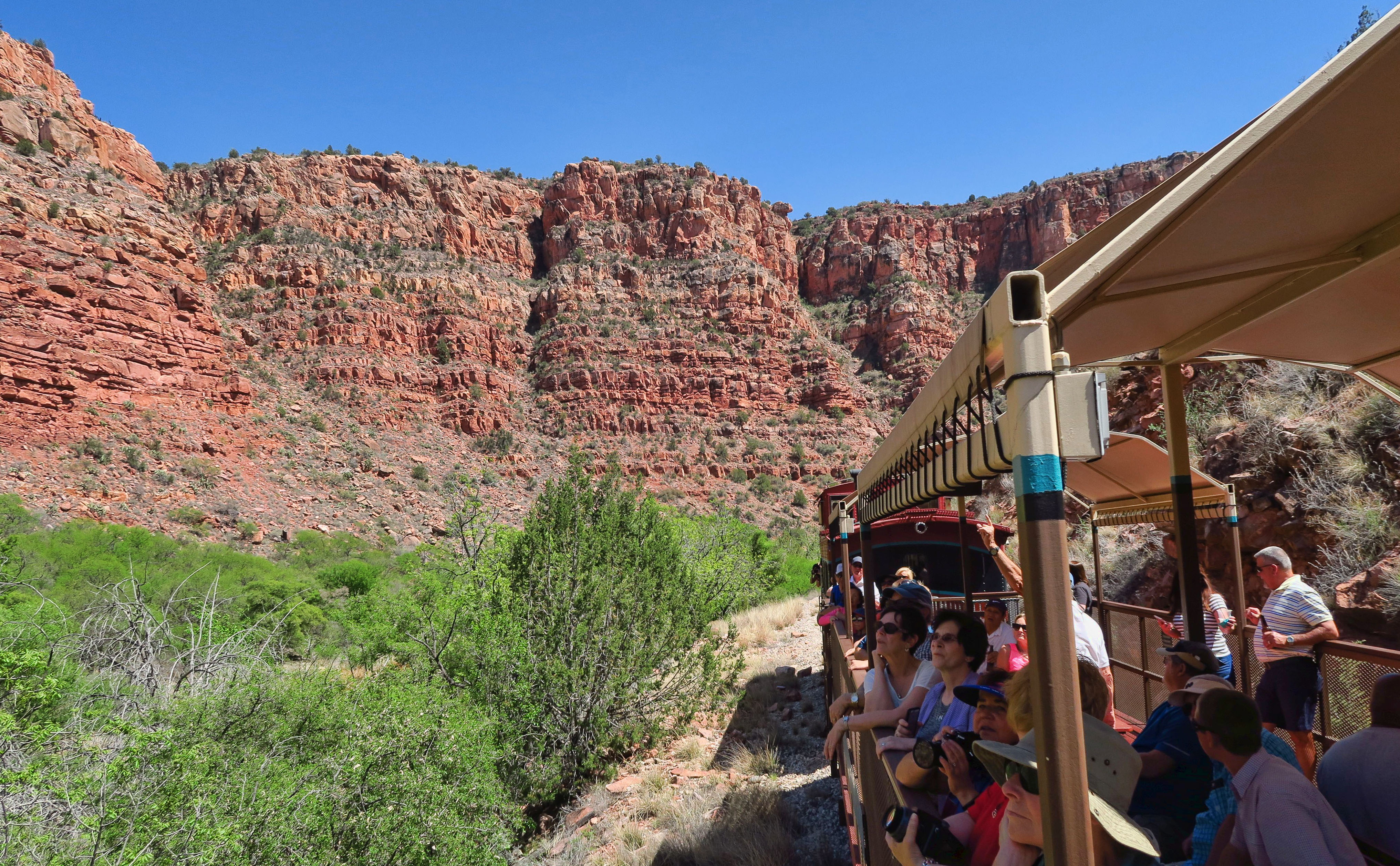 As the scenery improves, migration to the outdoor viewing cars increases.

Thank goodness there are no railway heist re-enactments on the train. No train robbers running up and down the aisle demanding your money (i.e. tips) like on the Grand Canyon Railway. It’s bad enough that they pipe in railway-themed music for the entire 4 hour ride, songs which according to the brochure have been “thoughtfully chosen for their historical significance and rockin’ beat.” Midnight Train to Georgia. Ride on the Peace Train. And of course, what railway repertoire would be complete without Johnny Cash’s “I hear the train a comin’.” Bring earbuds if you are not easily amused. 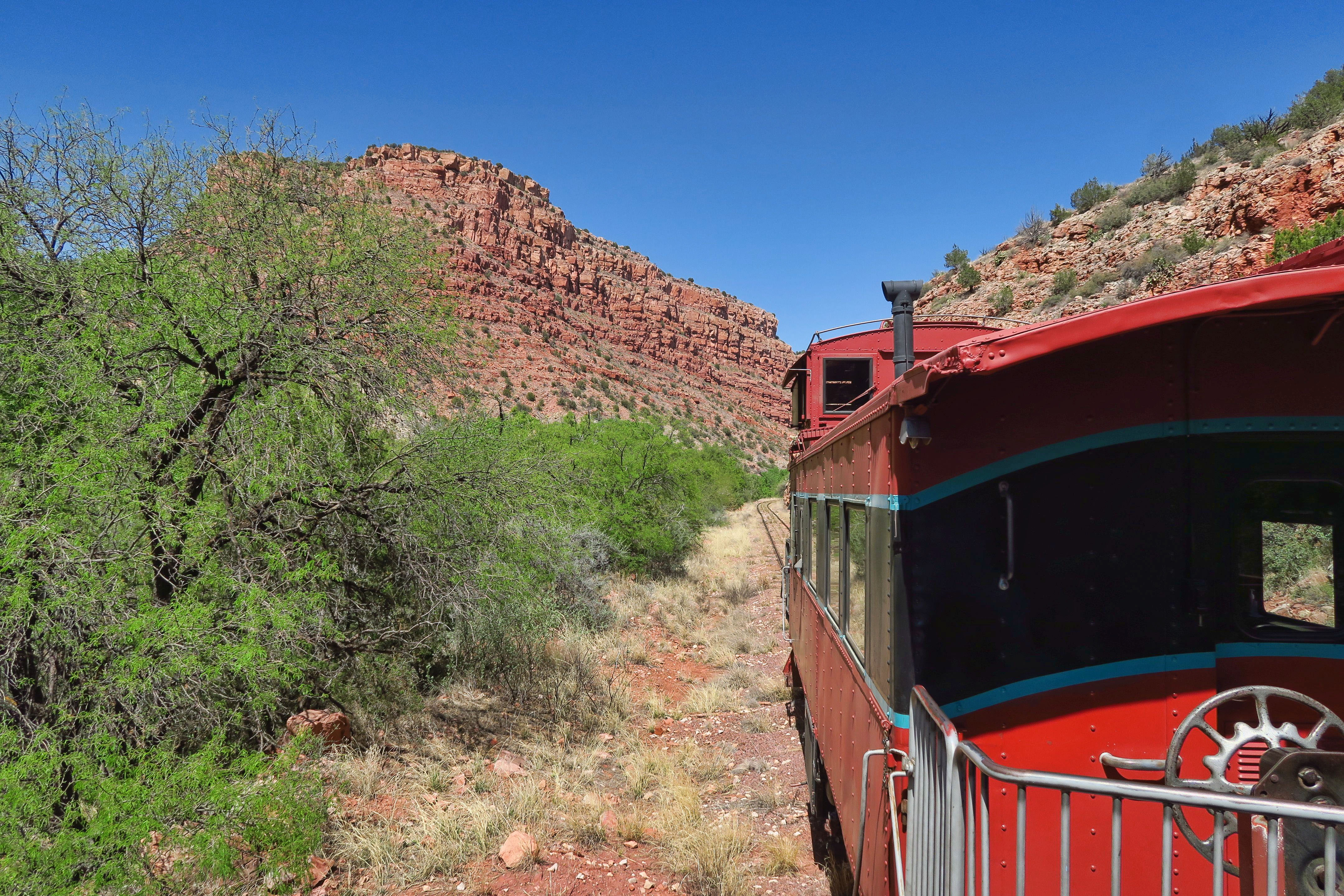 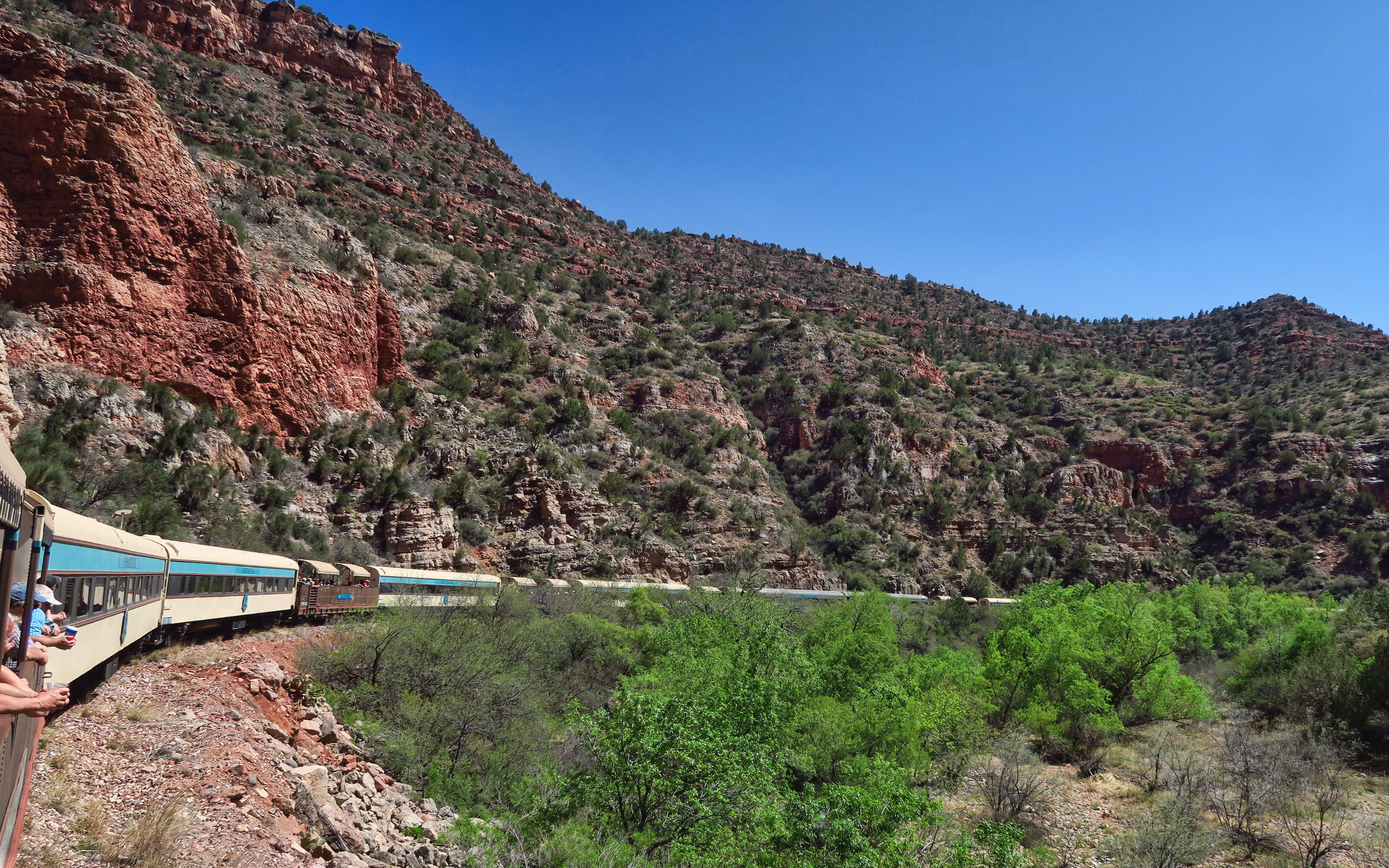 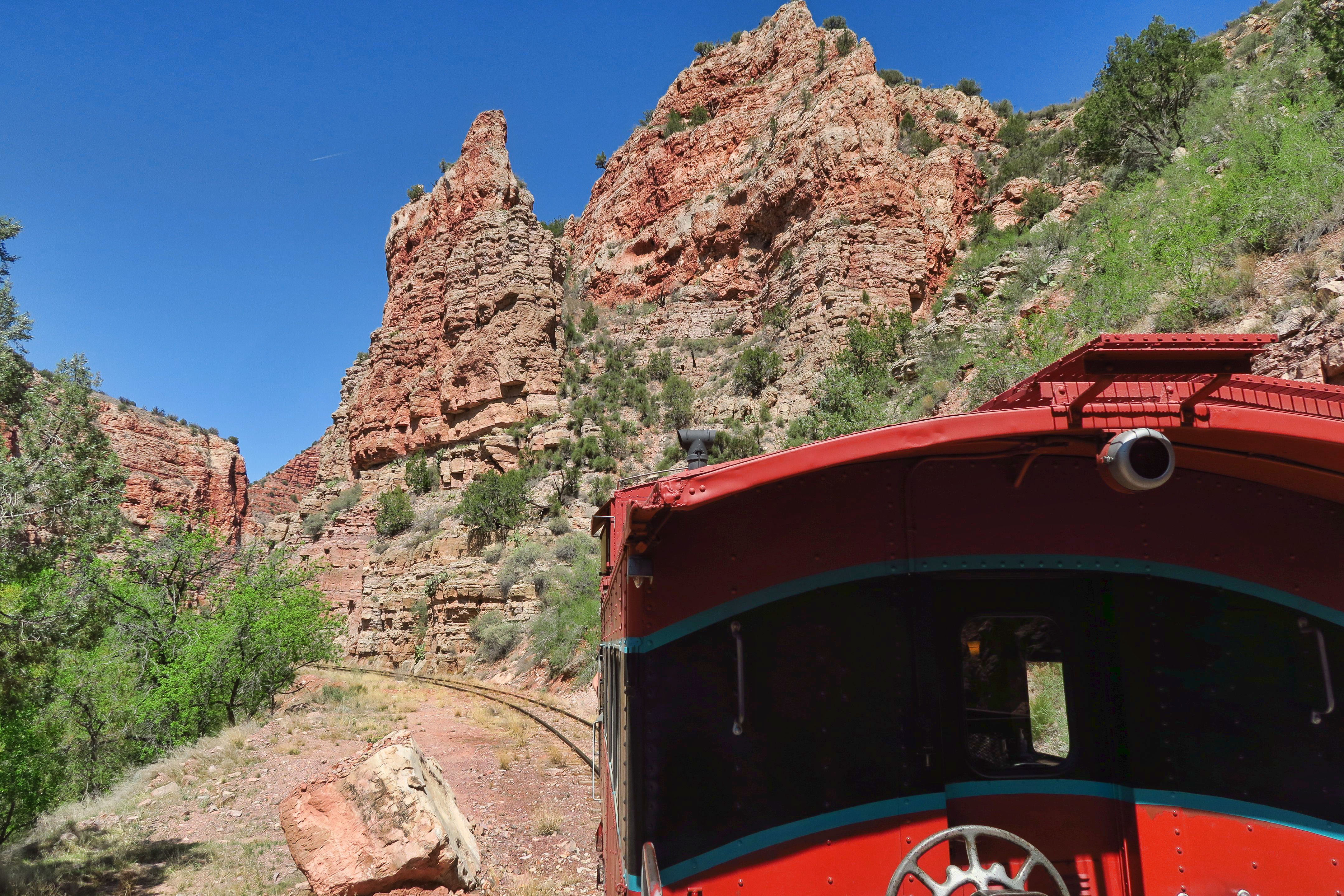 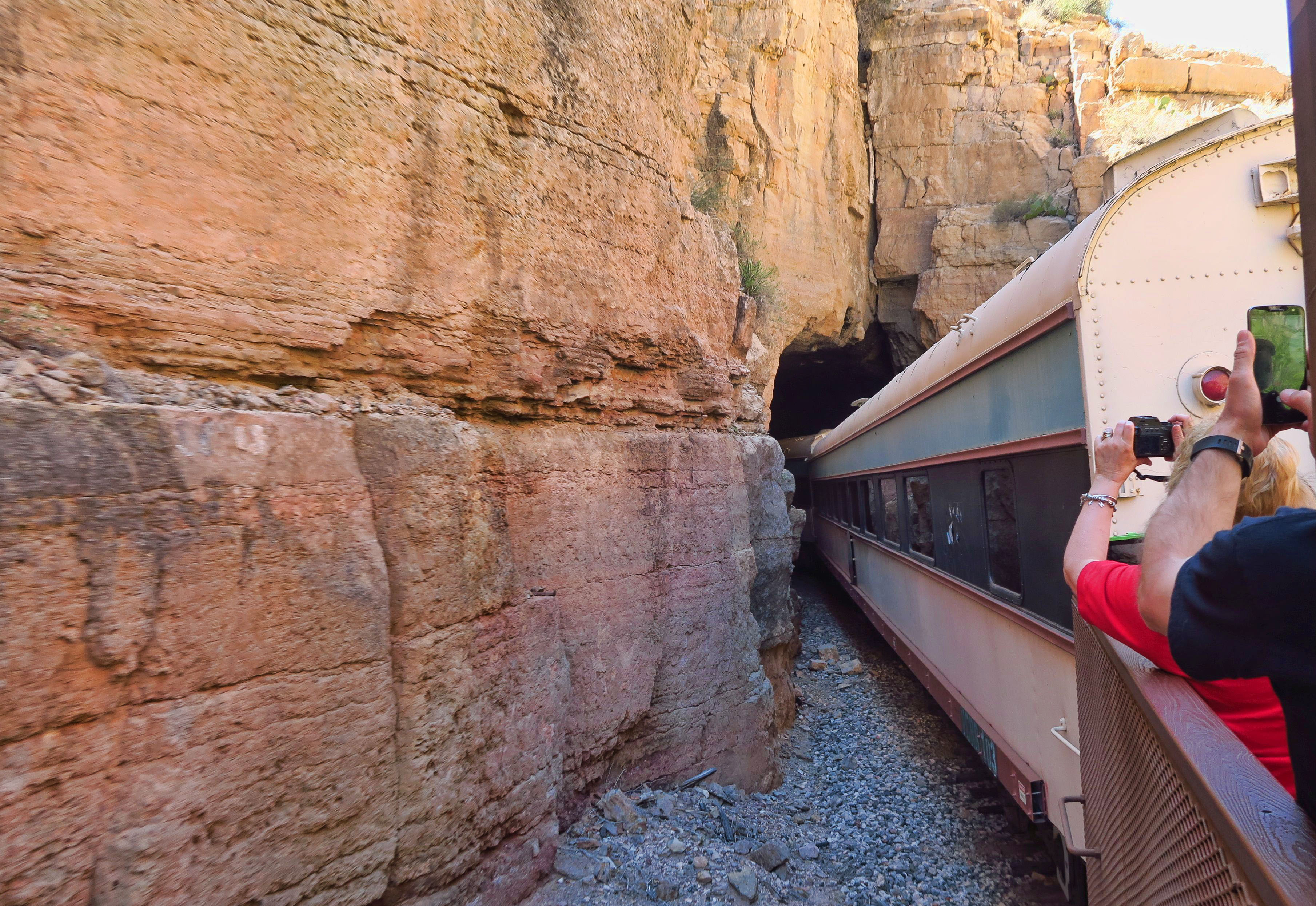 Excitement mounts as we approach the 680 ft tunnel. 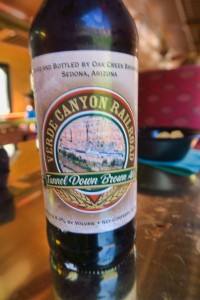 This calls for a celebration with a “Tunnel Down Brown Ale.” 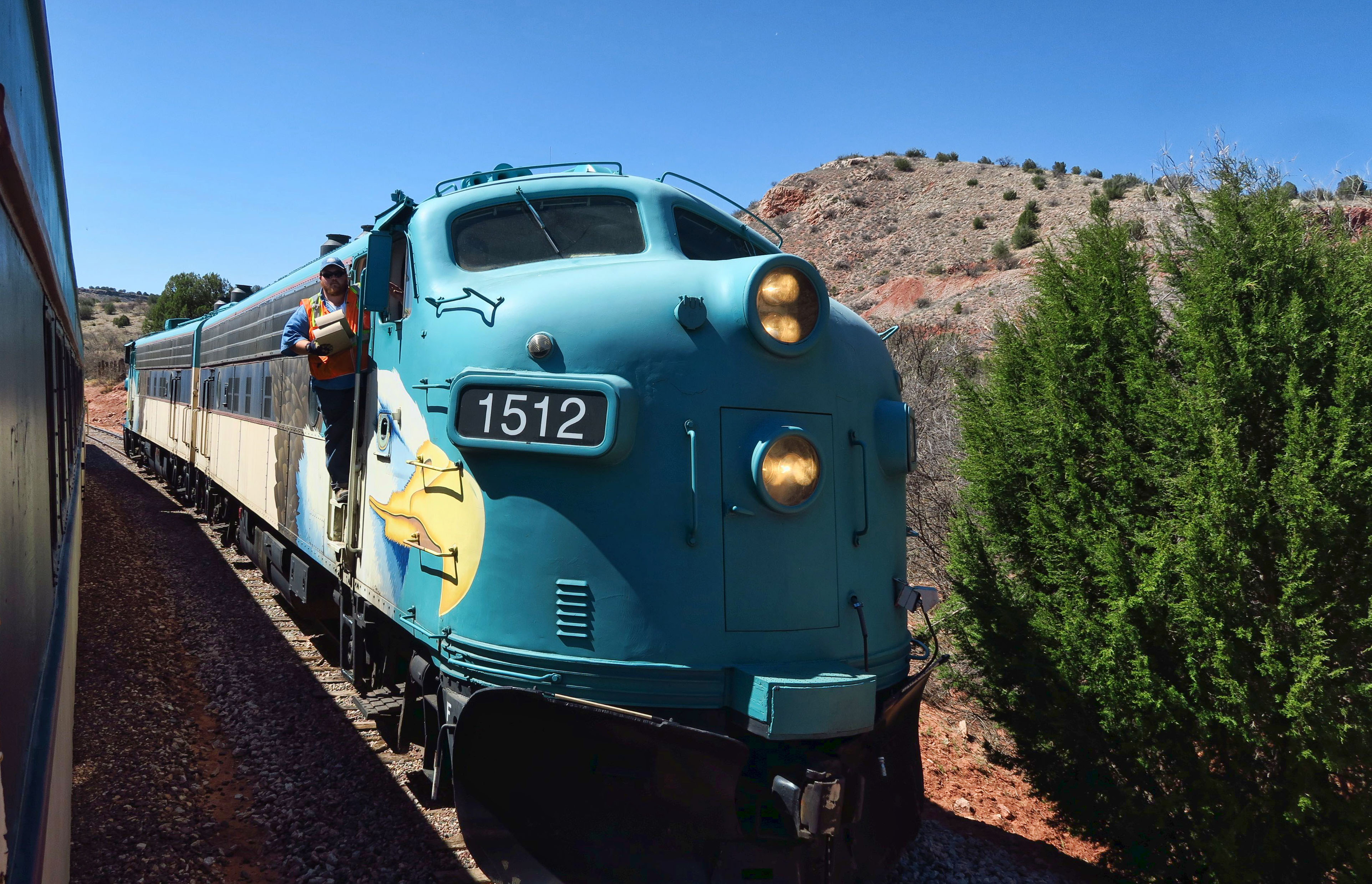 Once we reach the turn-around point at Perkinsville, the engines detach and come back to the caboose to pull us back to Clarksdale. 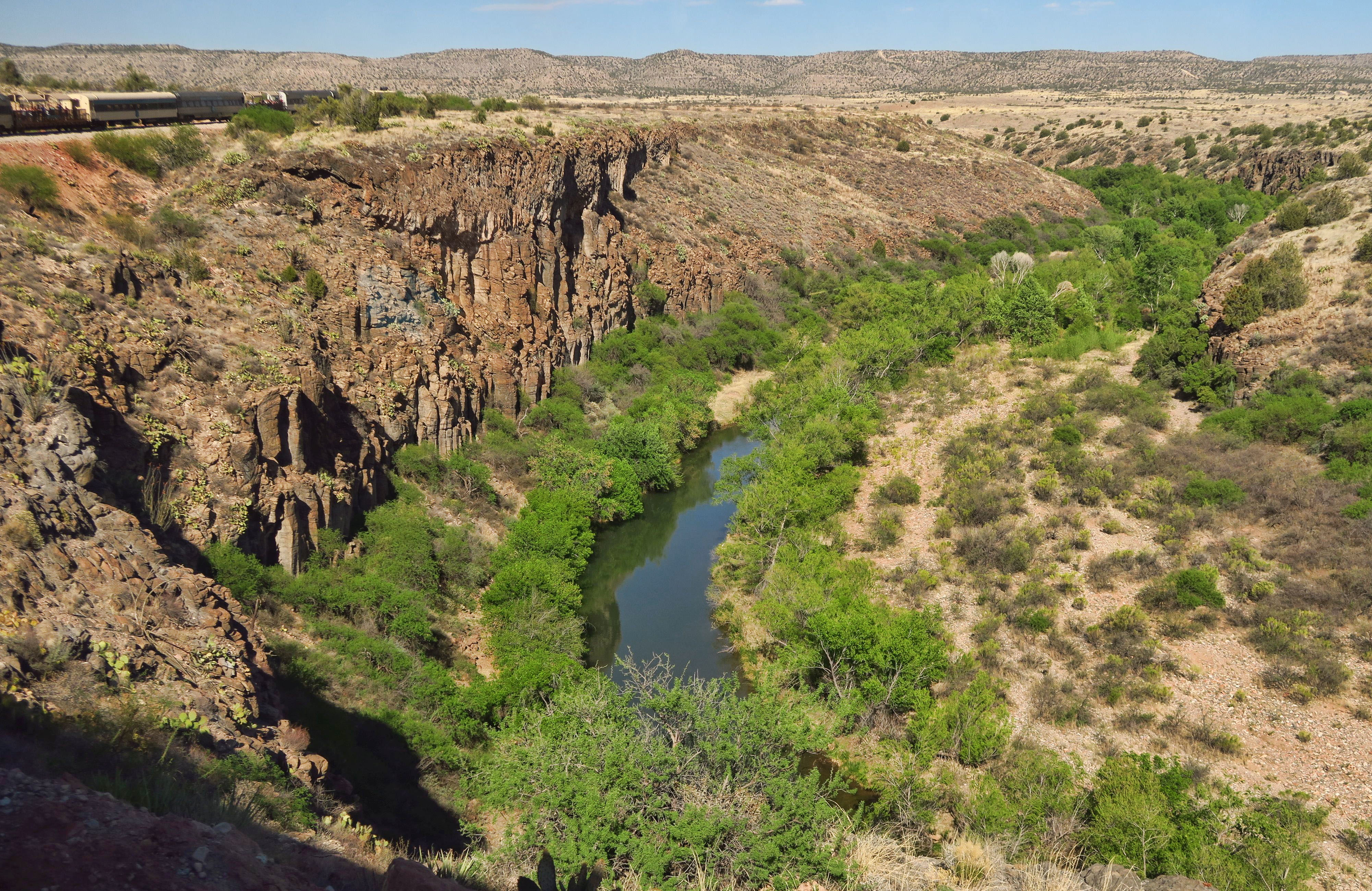 Now riding backwards in my assigned seat, I get a little different view on the way back.

Well I’ve got this berth and this roll down blind
I’ve got this fold up sink
And these rocks and these cactus going by
And a bottle of German wine to drink
Settle down into the clickety-clack
With the clouds and the stars to read
Dreaming of the pleasure I’m going to have
Watching your hairline recede, my vain darling
Watching your hair and clouds and stars
I’m rocking away in a sleeping car
This jealous lovin’s bound to make me
Crazy
I can’t find my goodness
I lost my heart
Oh, sour grapes
Because I lost my heart

10 thoughts on “The Last Train to Clarksdale”