It doesn’t take long after crossing the state line into South Dakota to reach the first of the state’s two national parks (Parks with a capital “P” of which there are 59 in the NPS.) A quick pass through the town of Hot Springs, and I am crossing the park boundary before I know it. Research has indicated that the town of Hot Springs is “HSINO,” (hot springs in name only) as the only source for the spring is a kids pool that is warm, at best. So I skip the pool and go straight for the park.

As soon as I see the typical National Park sign at the park boundary, traffic is stalled out ahead. I am excited to see the traffic jam is held up to allow two buffalo to cross the road. But I’m not too quick to pull over on the shoulder as many have done, as I figure there will be many more to come. I confess to the stereotype that now in the “home where the buffalo roam,” I will see herds of buffalo roaming across the prairie everywhere. So I casually roll pass the two specimens out my window, snapping a quick photo as I drive on, not knowing that’s the last I will see the buffalo roam the prairie within the park. I later wonder if my “herds of buffalo” paradigm is like when my brother brought two Chinese exchange students home from college, who expressed their disappointment in learning that not everyone in Texas wears chaps and rides around on horseback. 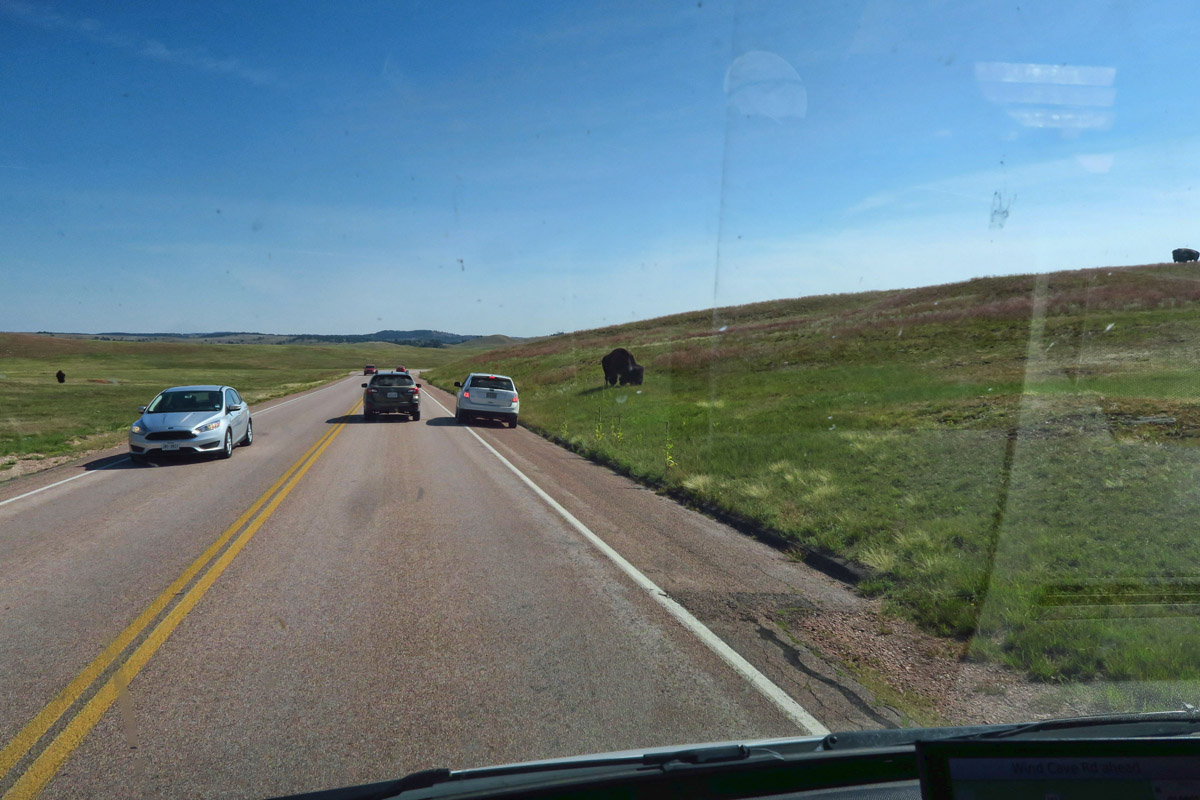 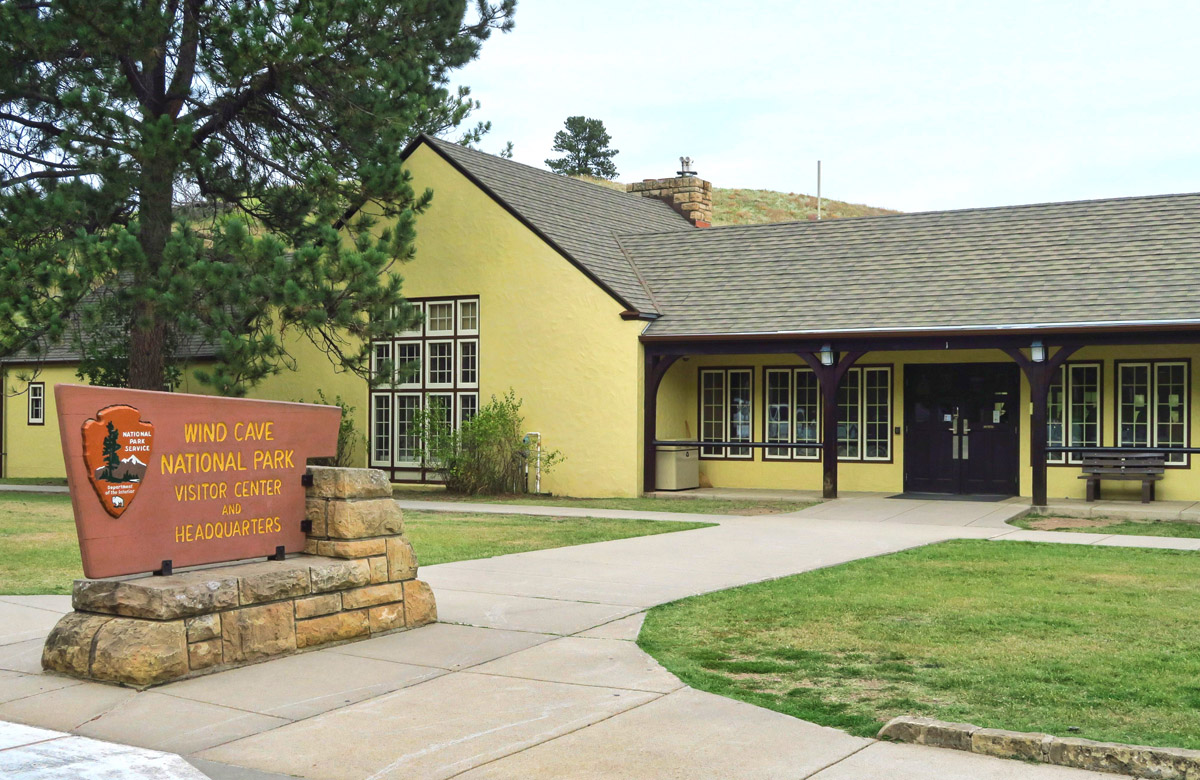 Wind Cave Visitor Center. Like so many parks, the CCC were instrumental in the building of the park, including the stucco Visitor Center, trails, and elevator shaft to access the cave. 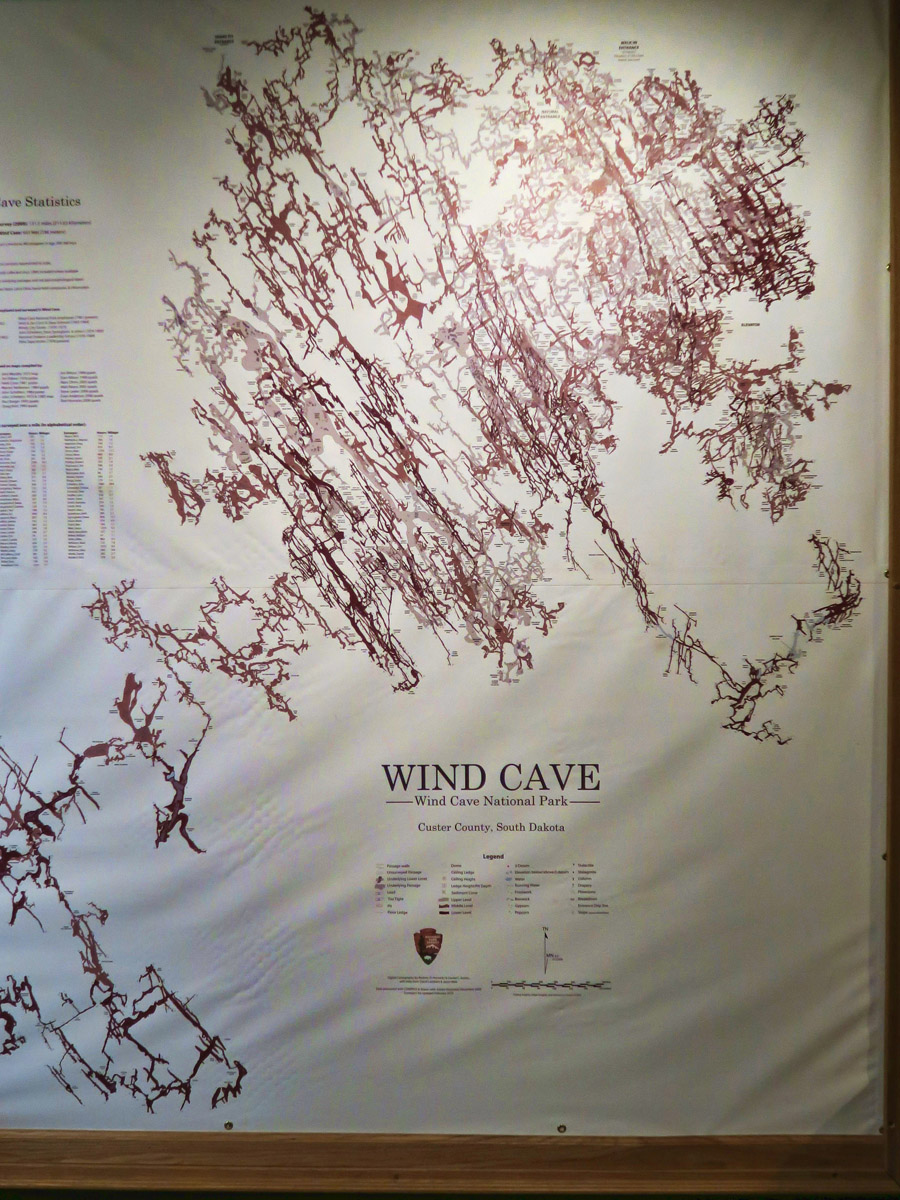 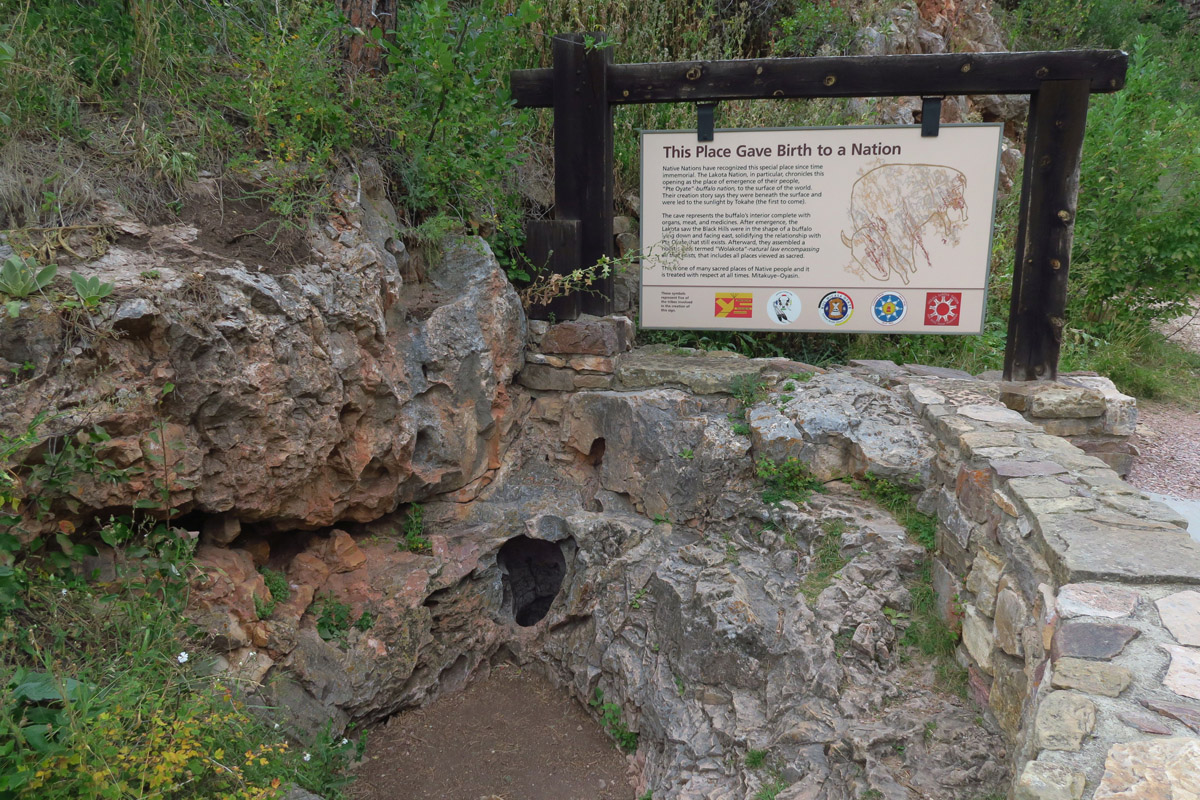 The natural opening of the cave, considered sacred by the Lakota people. 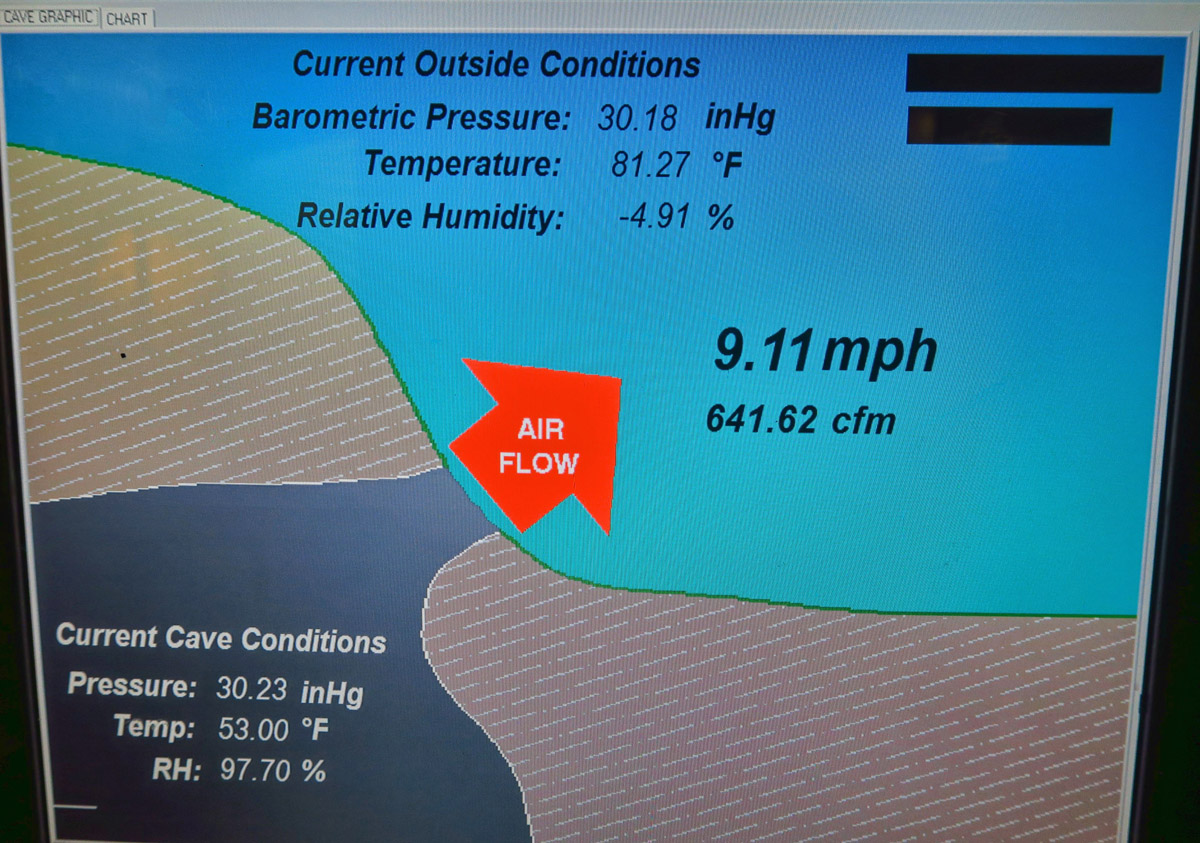 This interactive screen shows current pressure and wind direction as the cave “breathes.”

With over 129 miles of explored passageway, Wind Cave’s complex cave system is one of the longest in the nation. It is believed that only a fraction of the cave has been explored. Protected into the NPS in 1903 by Theodore Roosevelt, it is one of the oldest parks in the NPS system and the first park to feature a cave. Although the “white man” claims discovery in 1881, the natural opening has been considered sacred by the Lakota people for centuries. They believe their ancestral spirits emerged from the natural opening.

Once again, my quest to visit all the national parks brings me to a place I would not likely otherwise have come, and consequently I learn things I wouldn’t have otherwise learned. In the case of Wind Cave National Park, it’s about the naturally occurring phenomena called “boxwork.” 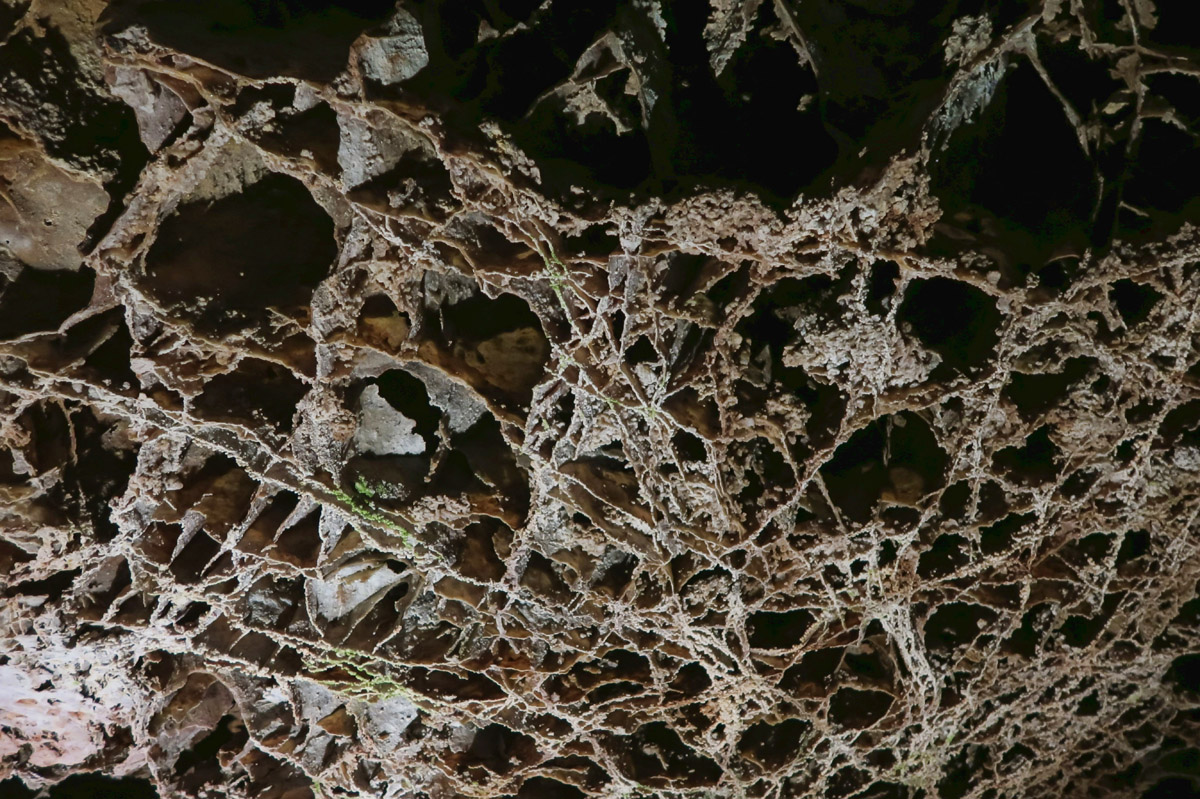 Most of the boxwork is found on the ceiling. 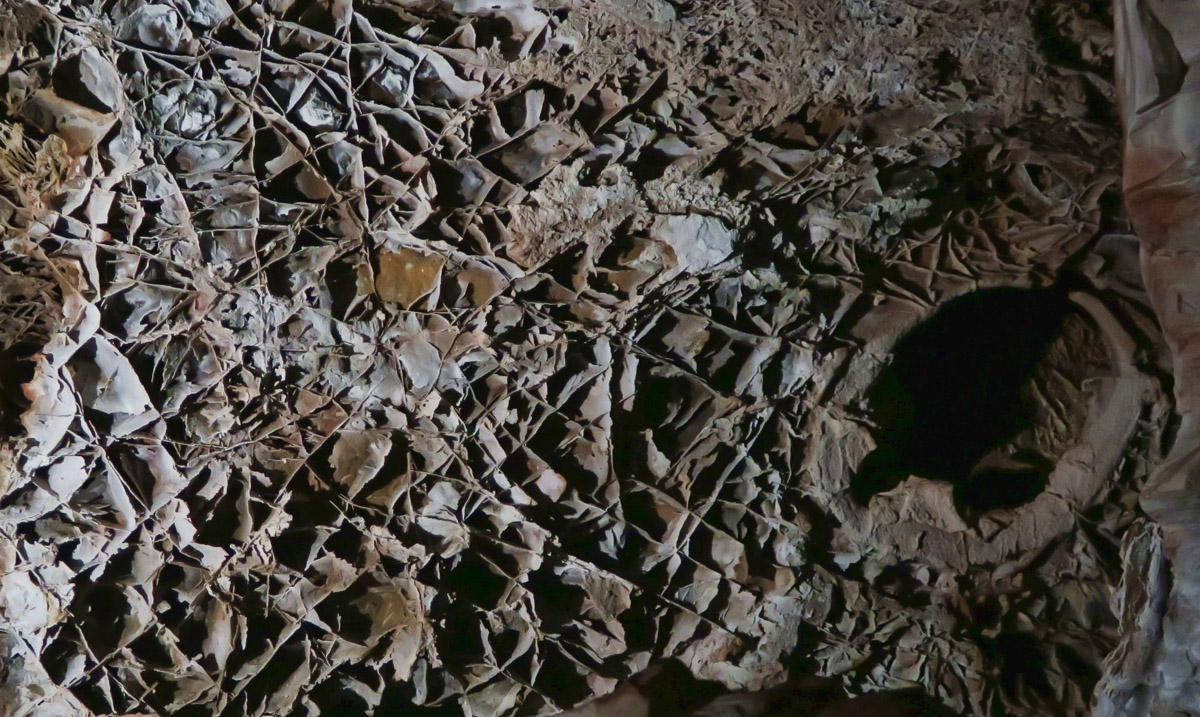 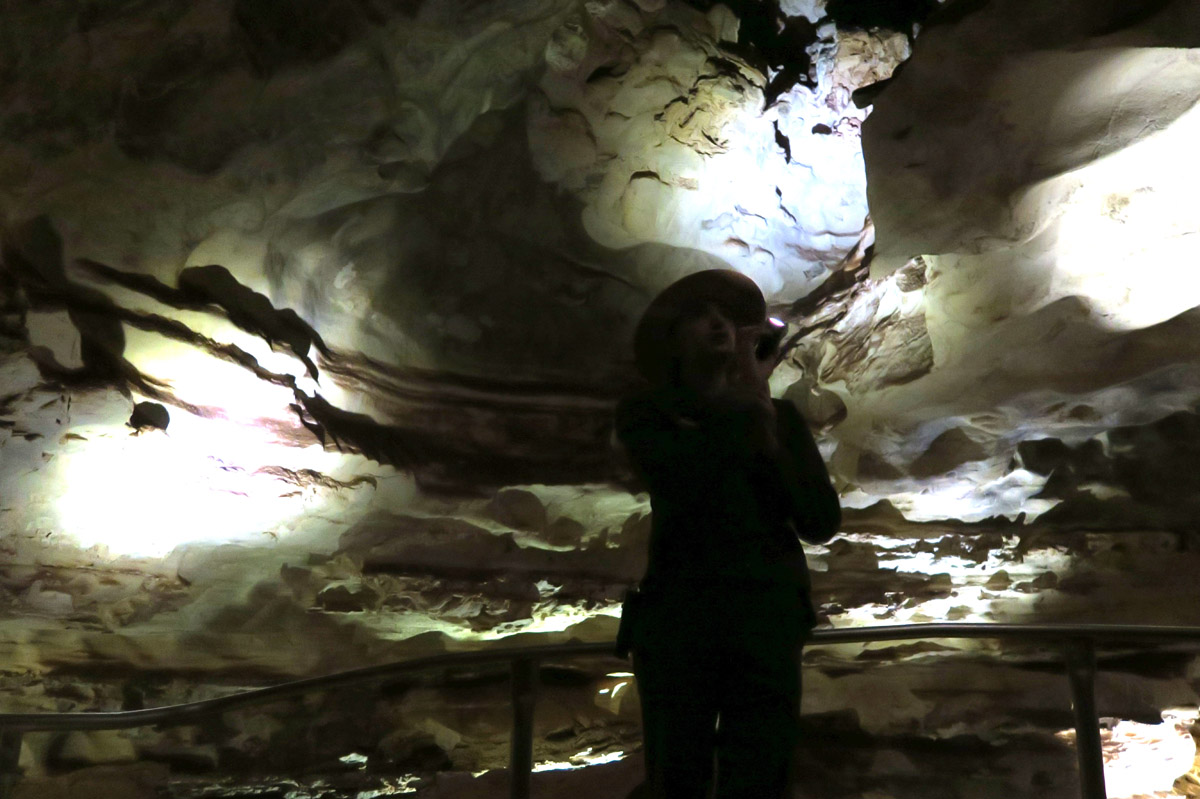 Ranger points to features on the ceiling. He tells everyone to get situated, as he is about to shut off the lights to show the extent of darkness.

These delicate honeycomb shaped fins of thin, paper-like formations are believed to have been formed before the cave itself. As stress cracks occur in the limestone, the cracks are filled with calcite. Then acid-rich water dissolves the limestone making passageways in the cave. Water drains from the cave, leaving behind the calcite fins known as “boxwork.” These formations are somewhat rare, with over 90% occurring in Wind Cave. 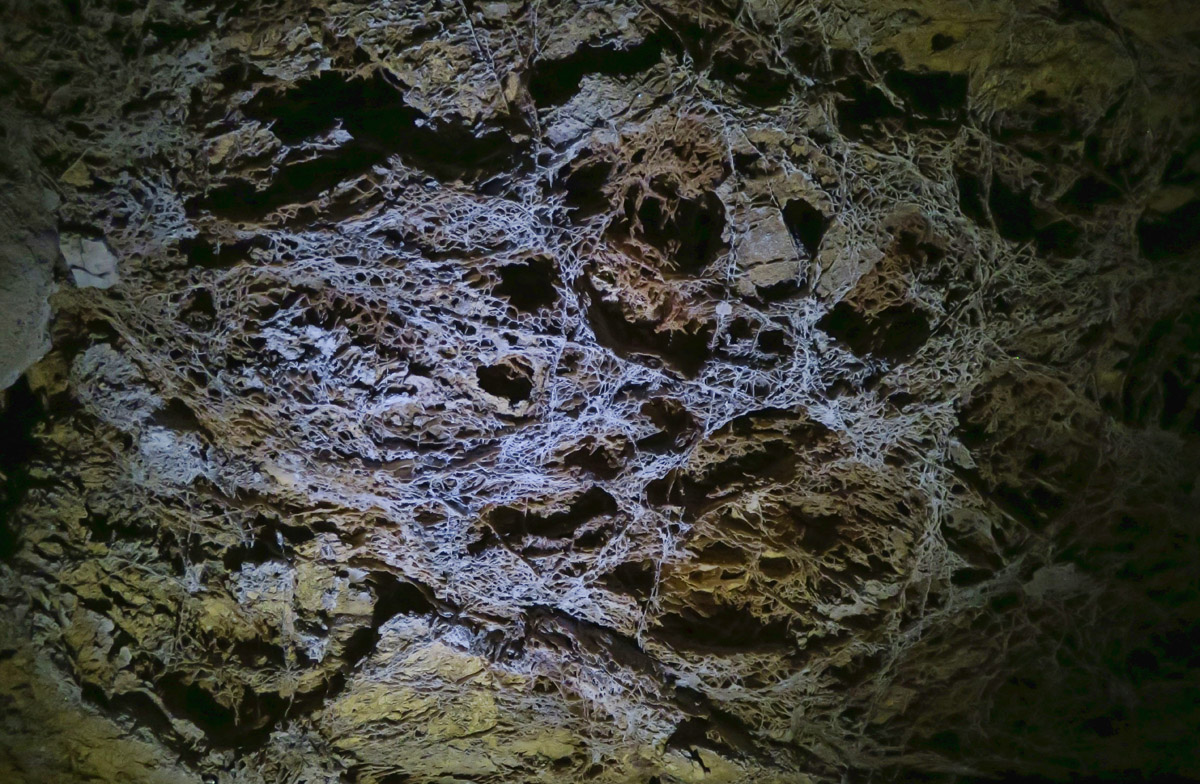 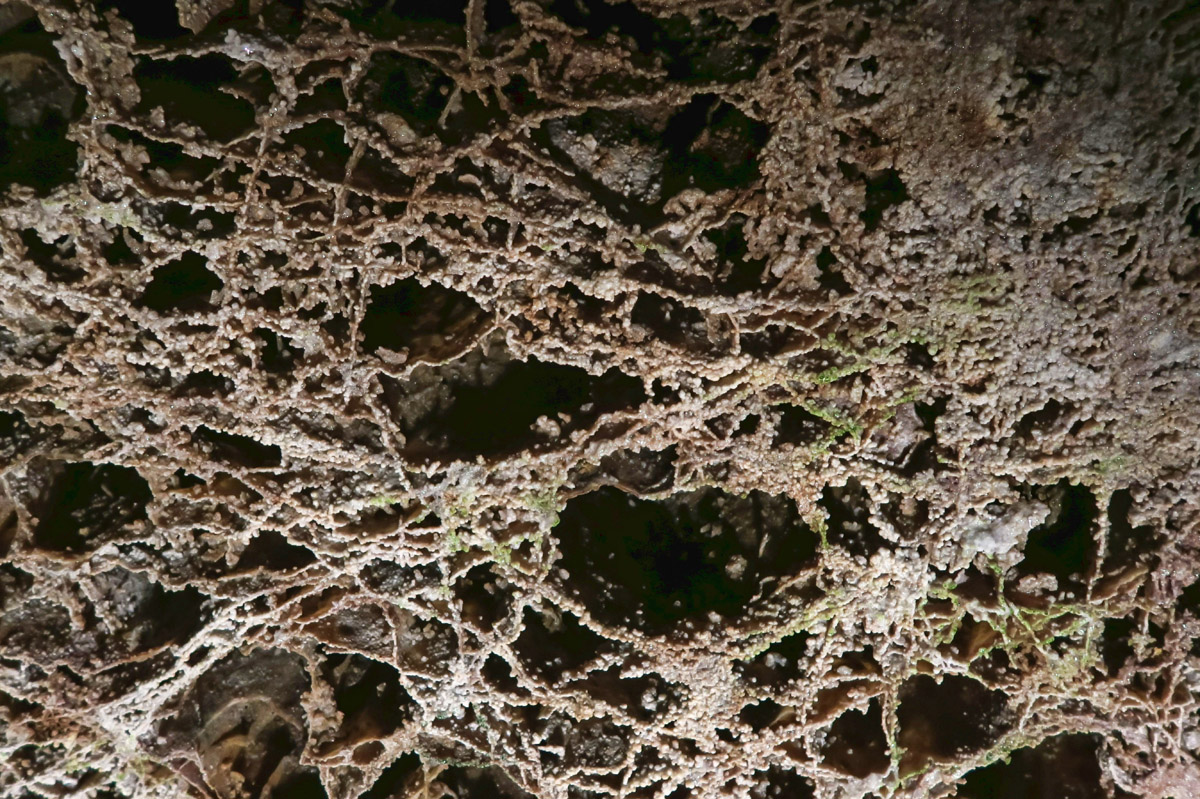 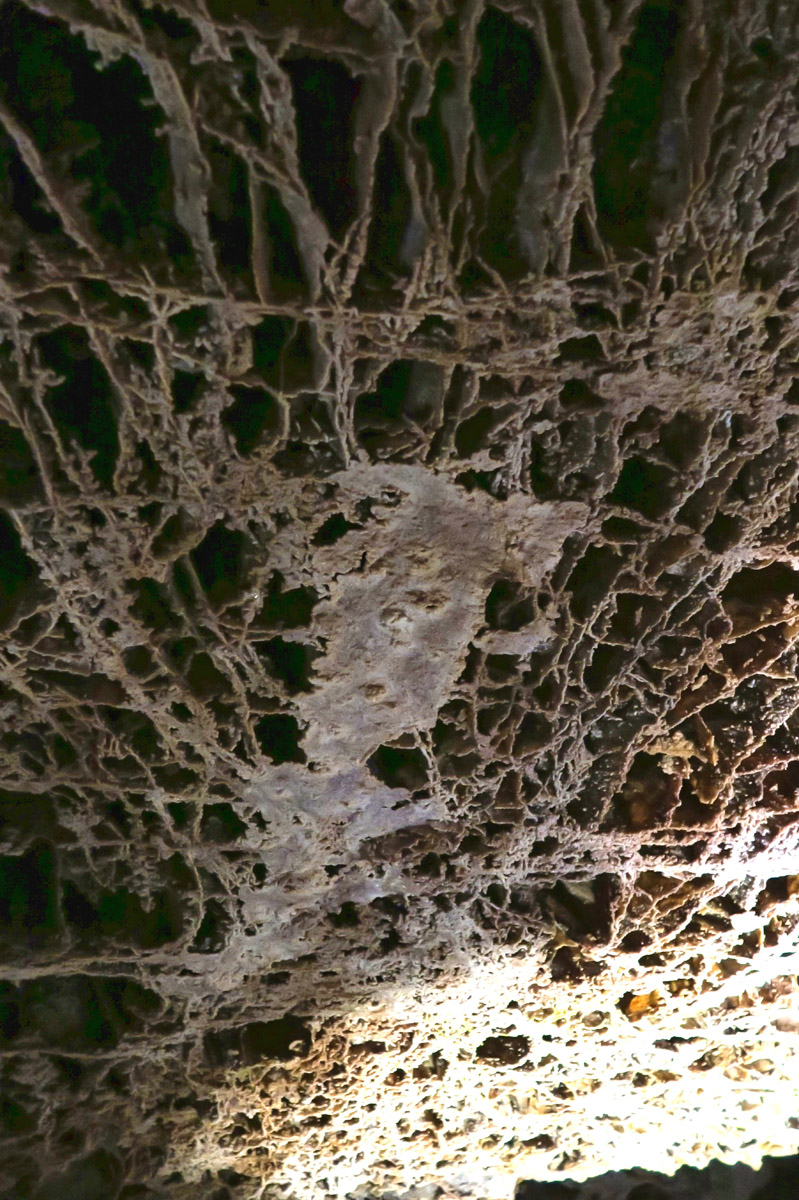 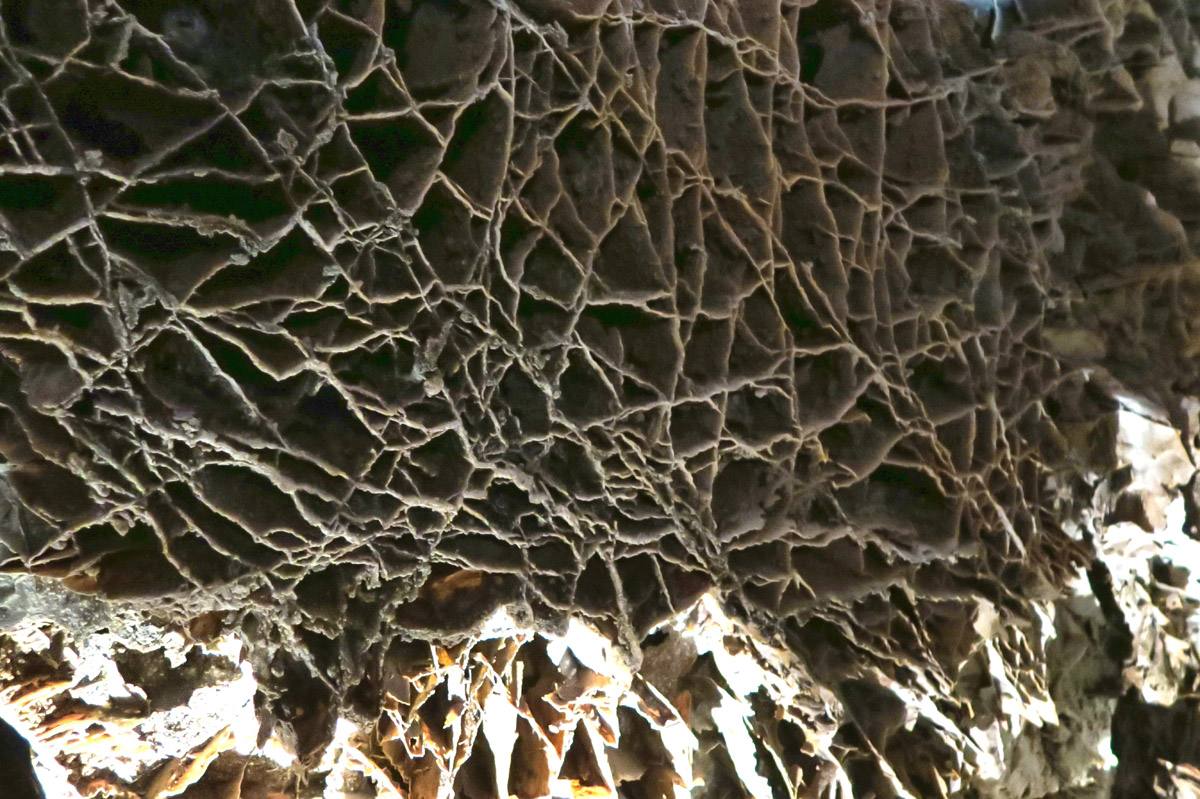 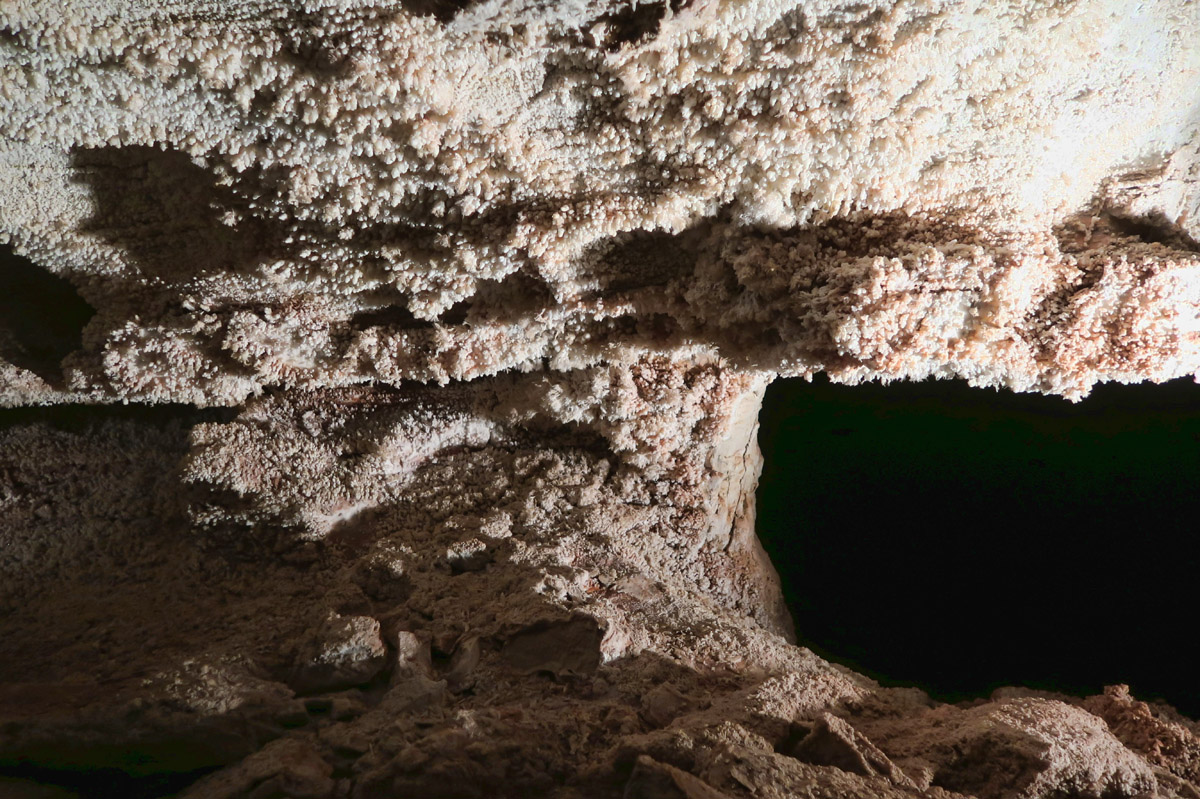 The Fairgrounds room has a large area of frostwork as well.

The Fairgrounds, one of the caves larger rooms was named as such upon discovery in 1892 because every feature of the cave could be found there, much like the variety of entertainment one can find at the fairgrounds. The room can be visited on the tour by the same name. I chose this particular tour because it was longer, but also because it visited two levels of the cave that included extensive formations, both of boxwork and the crystal flower-like structures called “frostwork.” 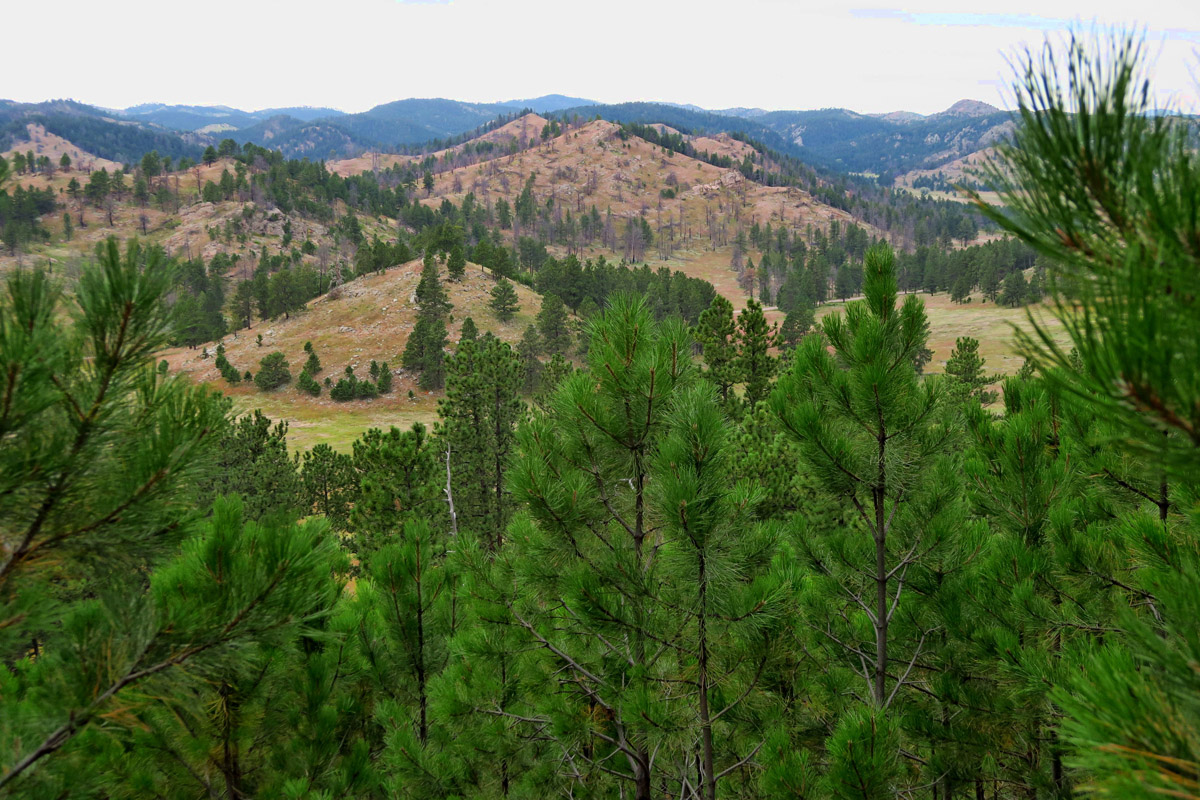 There are 30 miles of hiking trails through the Black Hills within the Wind Cave park boundary. 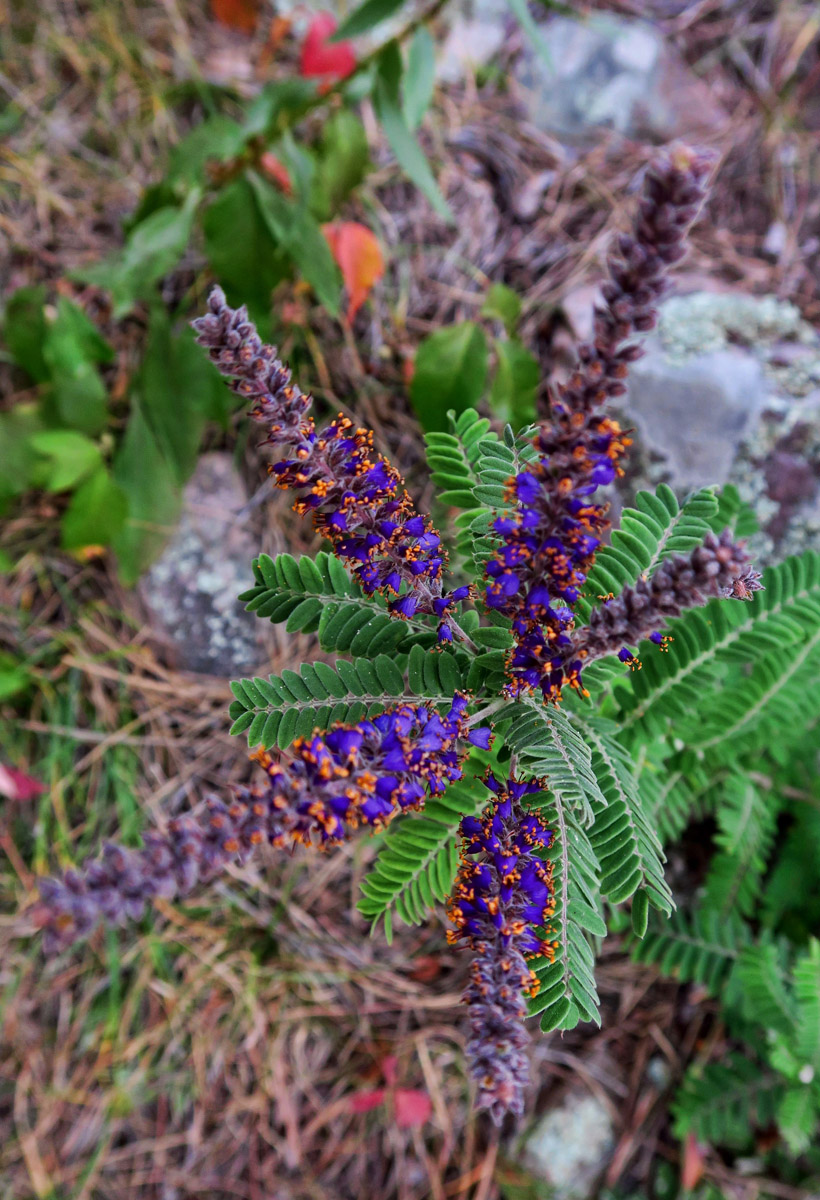 I don’t know what this is, but the purple/orange blooms are beautiful. 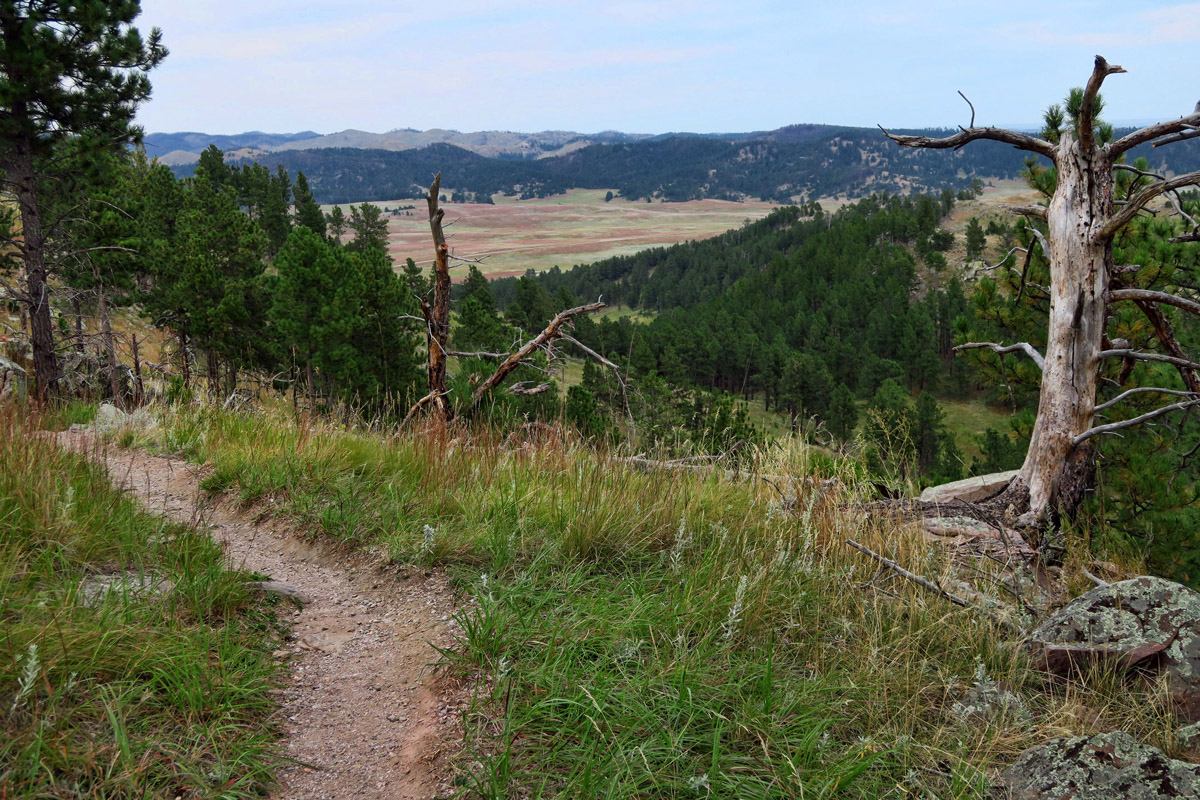 Hiking trails are nice, but not memorable.

Wind Cave National Park gets its name from exiting air, barometric winds which either blow inward or outward from the small natural entrance, depending on the barometric pressure on the surface. If there is a high pressure system on the surface, air is forced into the cave to create high pressure inside. When there is a low pressure system, the wind switches directions and blows out of the cave to lower the pressure. This flow of air in and out of the cave as it equalizes with the surface above is known as “cave breathing.”

To get an idea of what both the Lakota people experienced, as well as the two hunters who stumbled across it in 1881 and had their hats blown off their heads, click on the 15 second video below: 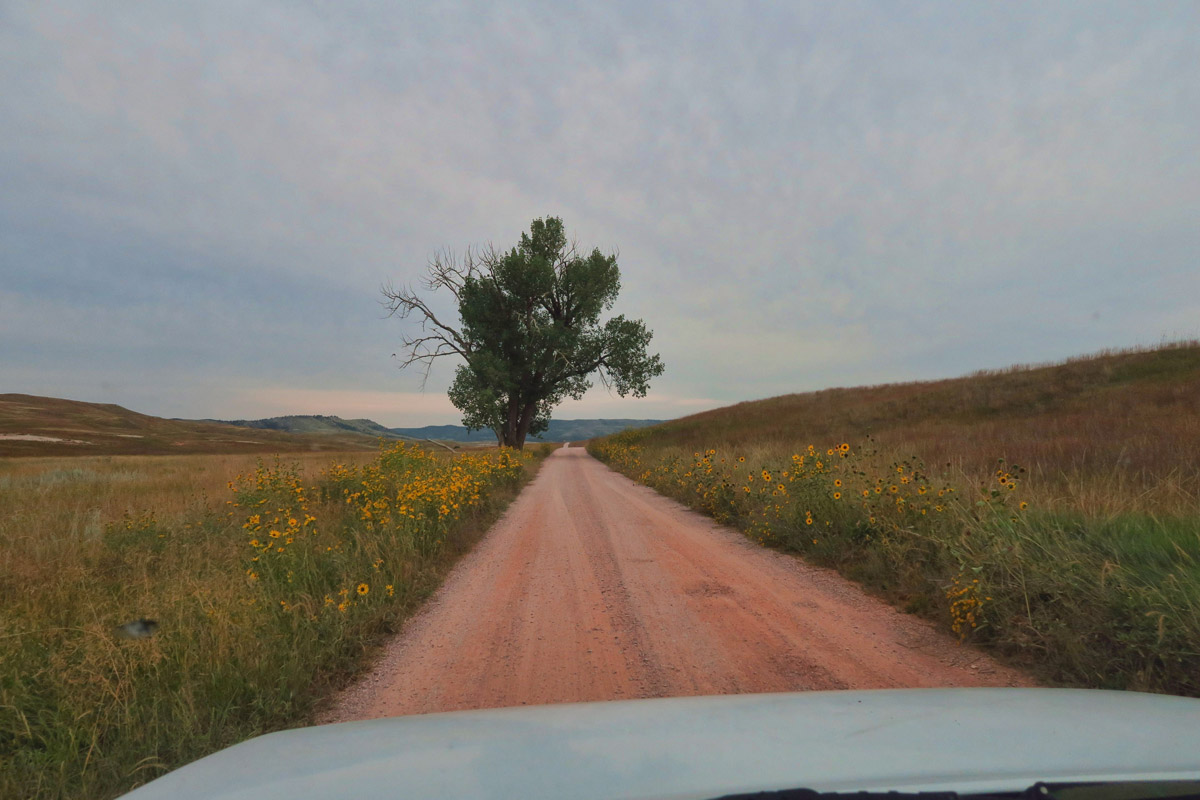 Off on my self-guided Wind Cave “wildlife safari” across the prairie. 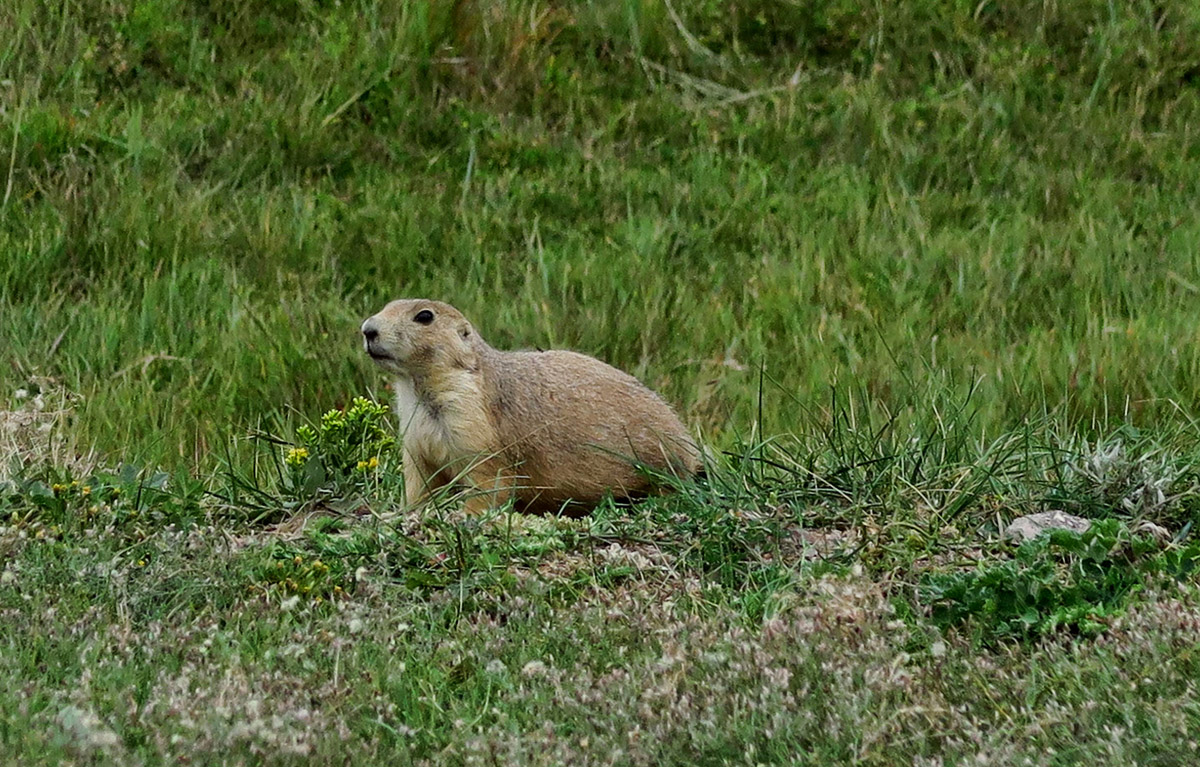 Prairie Dog Town. They are so cute! (Sorry Jim and Barb, SD land owners who count these as their nemesis.) Prairie dogs can remove up to 500 lbs of soil per burrow.” 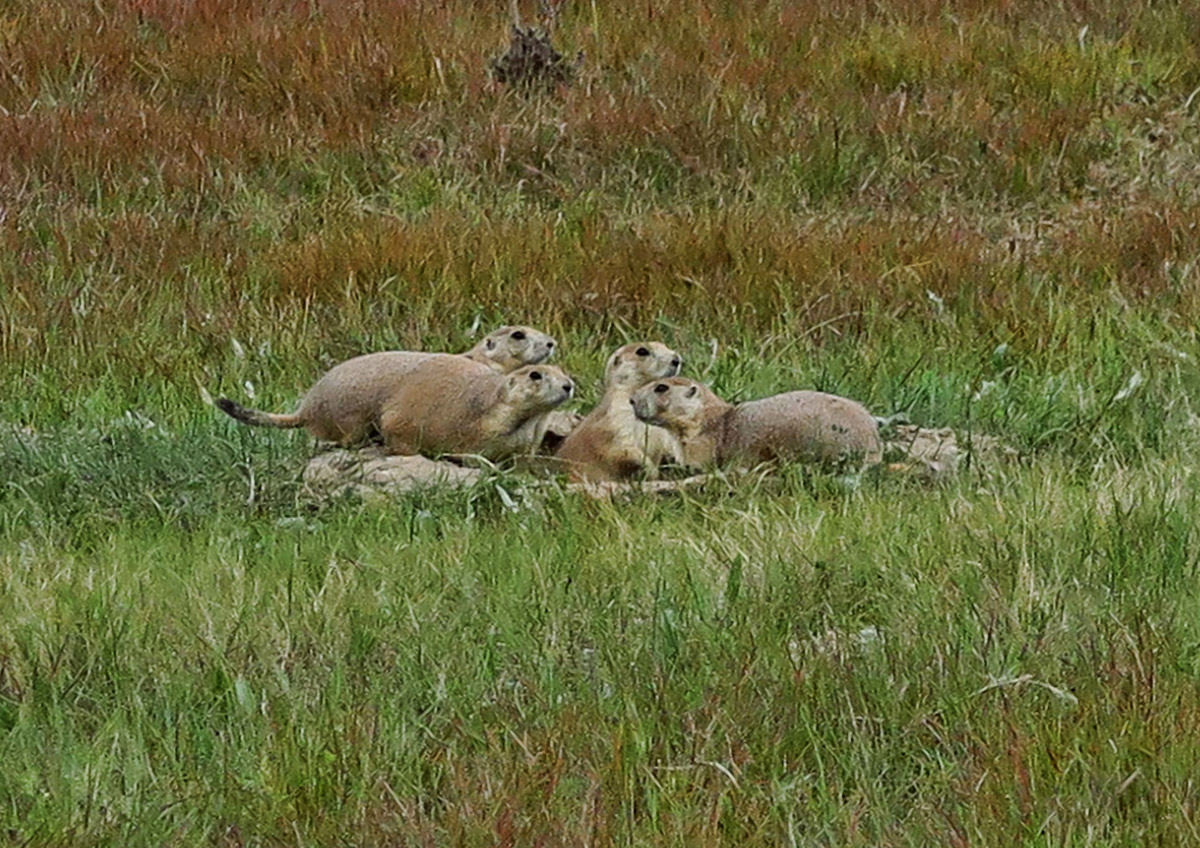 The park recently reintroduced the black-footed ferret, predator of the prairie dog to help control the population. They can consume over 100 prairie dogs in one year. 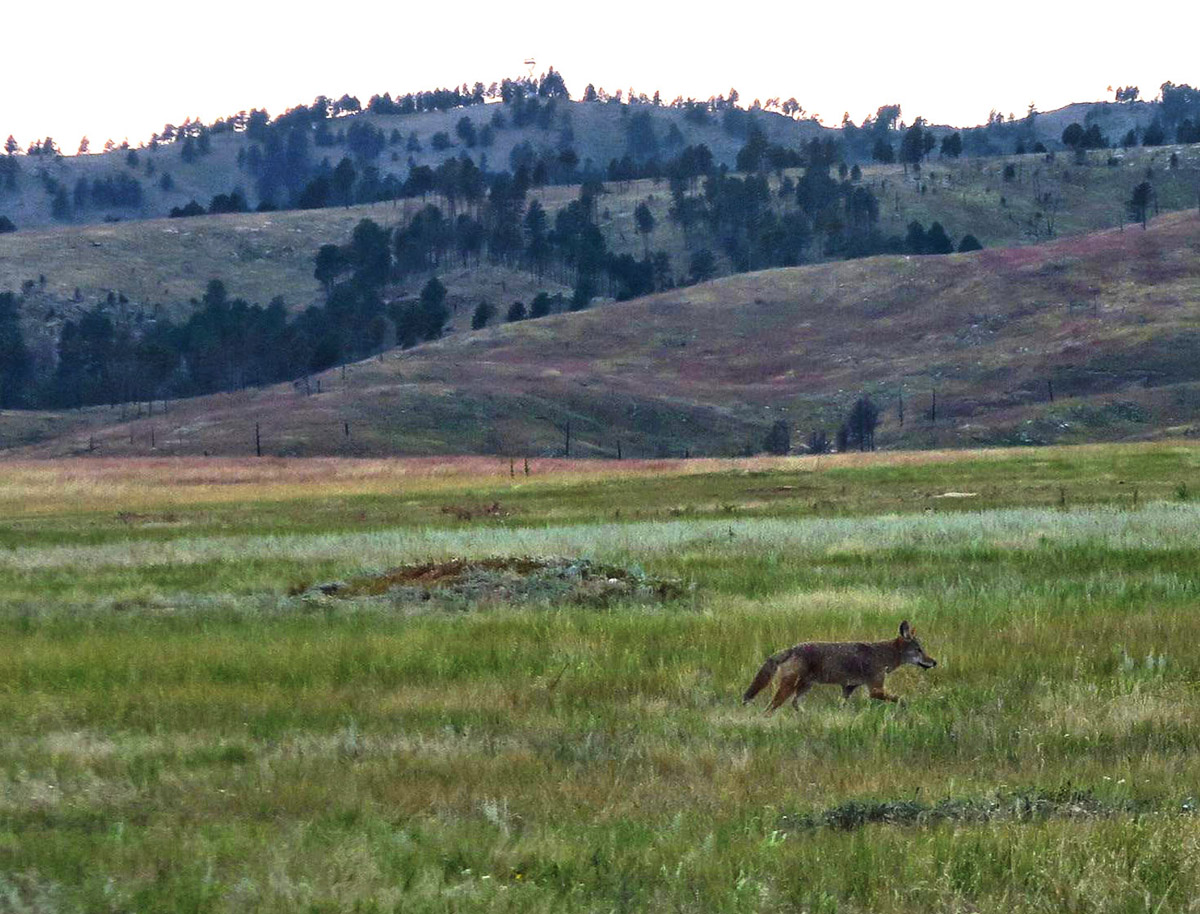 The Prairie Dog’s predator is also the coyote. They have to be fast though, as prairie dogs dive back into their burrows in the blink an eye. 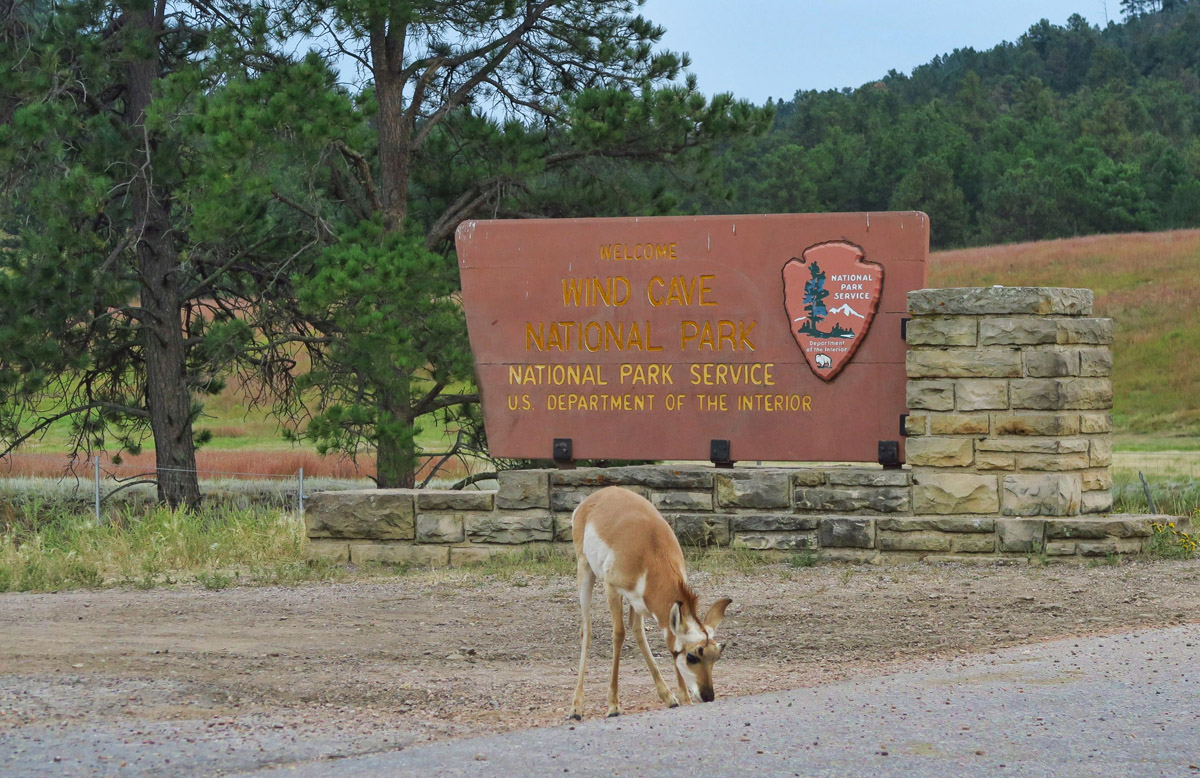 Pronghorns are the fastest animal in North America. 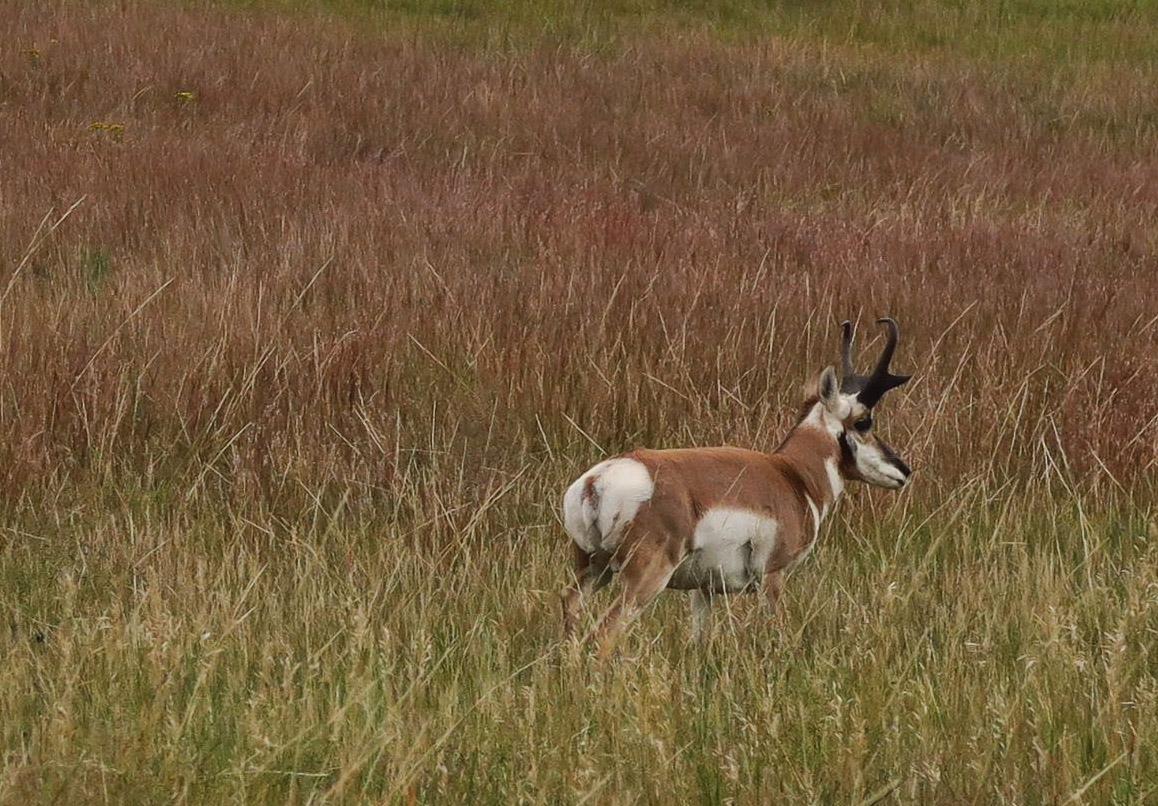 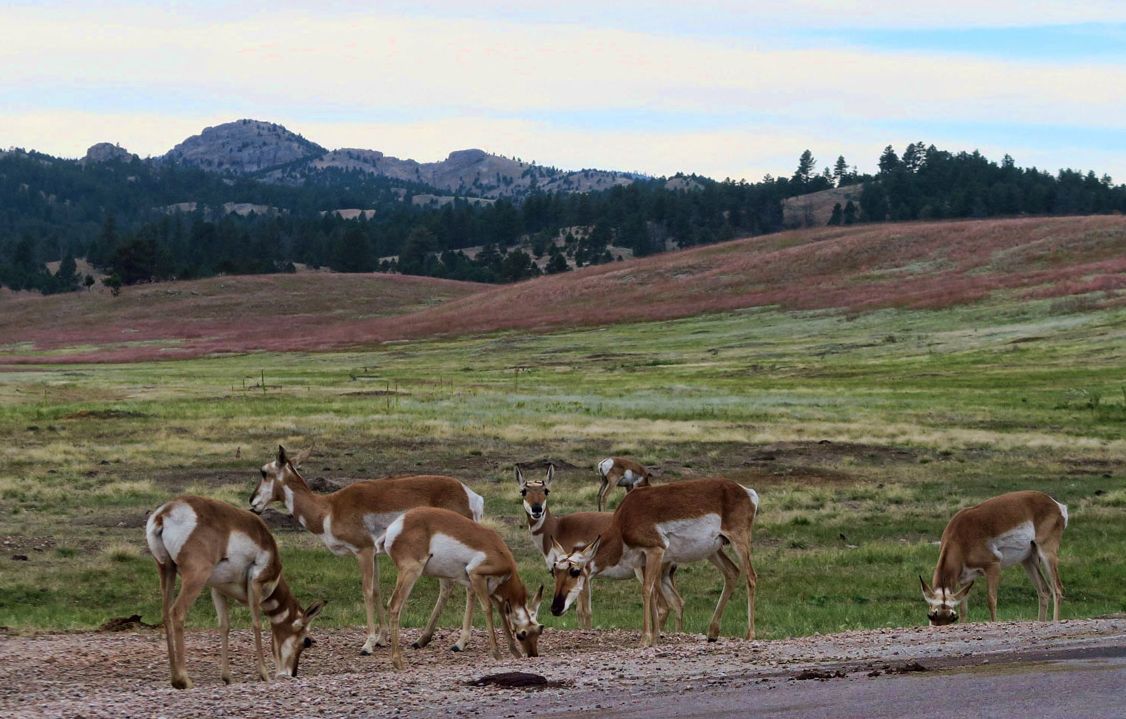 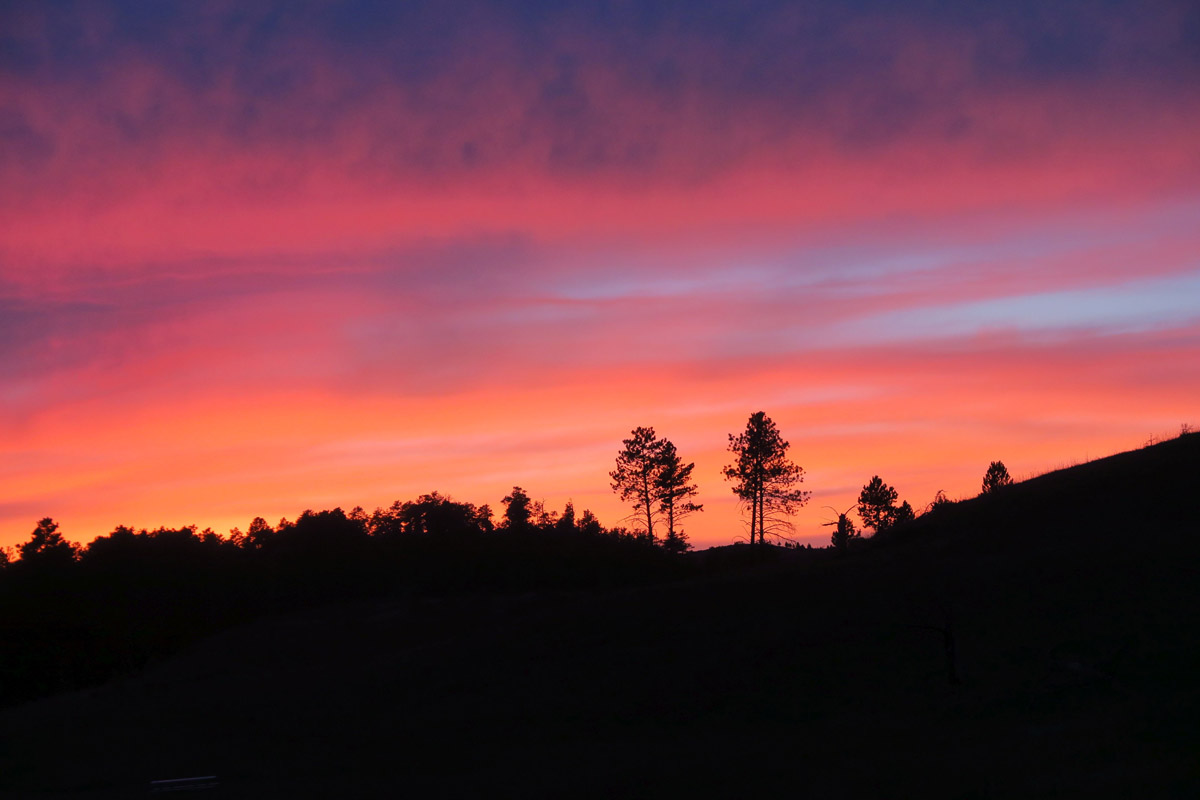 Taken from my campsite in the Elk Mountain CG within the park.