I’ve written many times before about Mexico’s “Pueblos Magicos” program which translates to “Magic Towns.” This program established by Mexico’s Secretariat of Tourism (SECTUR) is a way to recognize certain towns for their historic or cultural ambiance that lends itself to a “magical experience.” I think of it as the urban version of the National Park Service. Just as you can be assured when a park has achieved official “National Park” status, there will be something there worthy of a visit, the same can be said for Mexico’s Magic Towns. There will, in all likelihood, be something compelling there to pique ones interest. 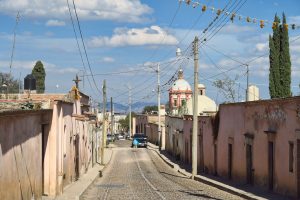 Coming in to Mineral de Pozos, the first thing I notice is that the buildings are all pastel. 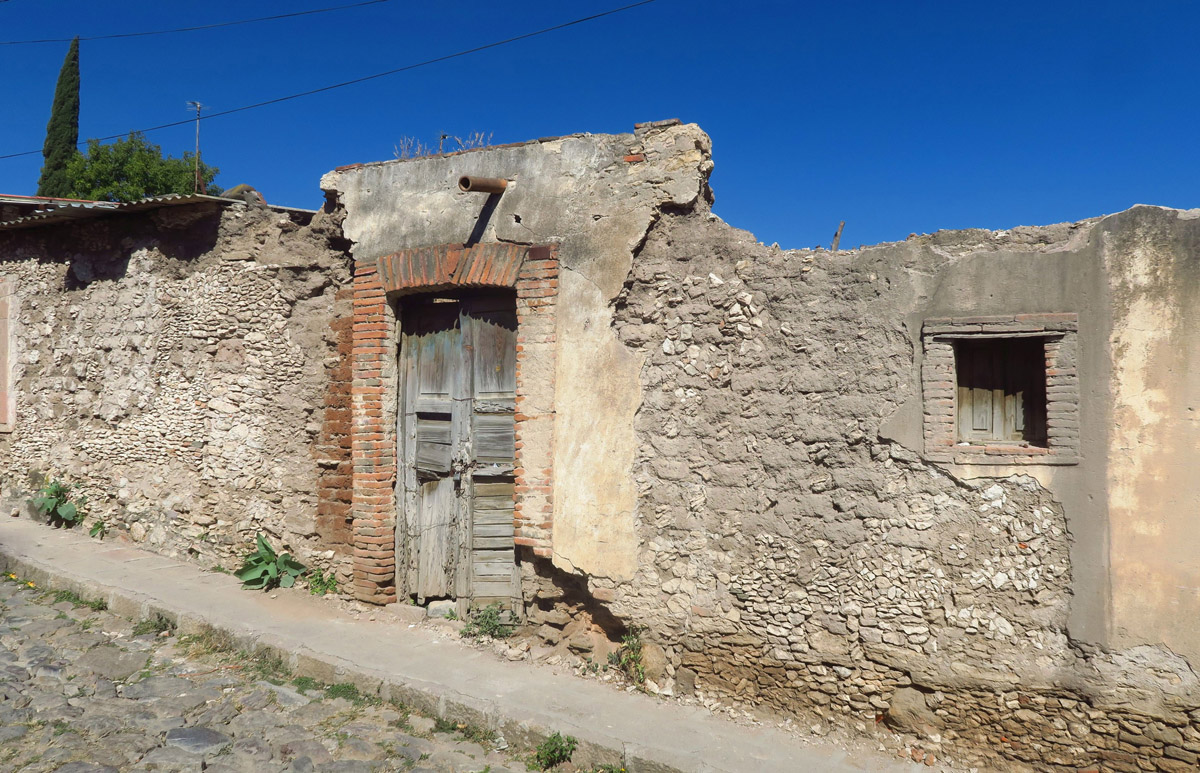 Lots of old buildings around the streets of Pozos. 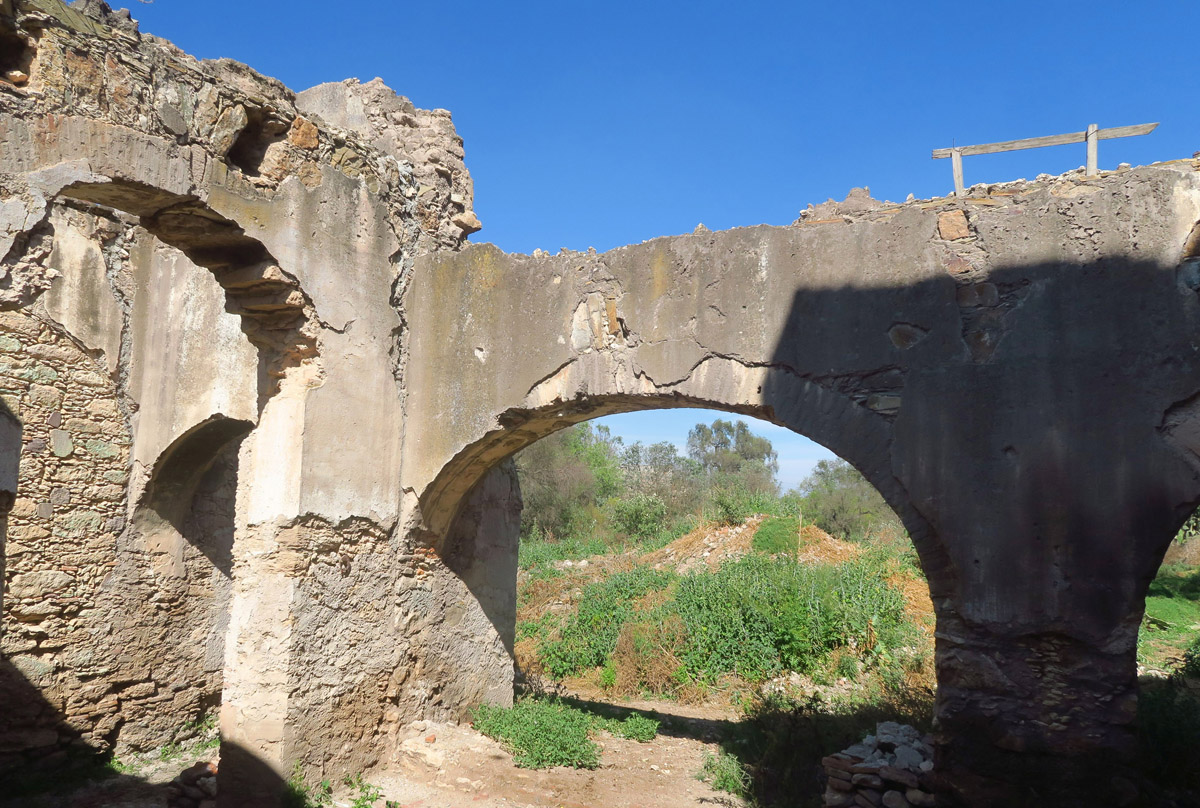 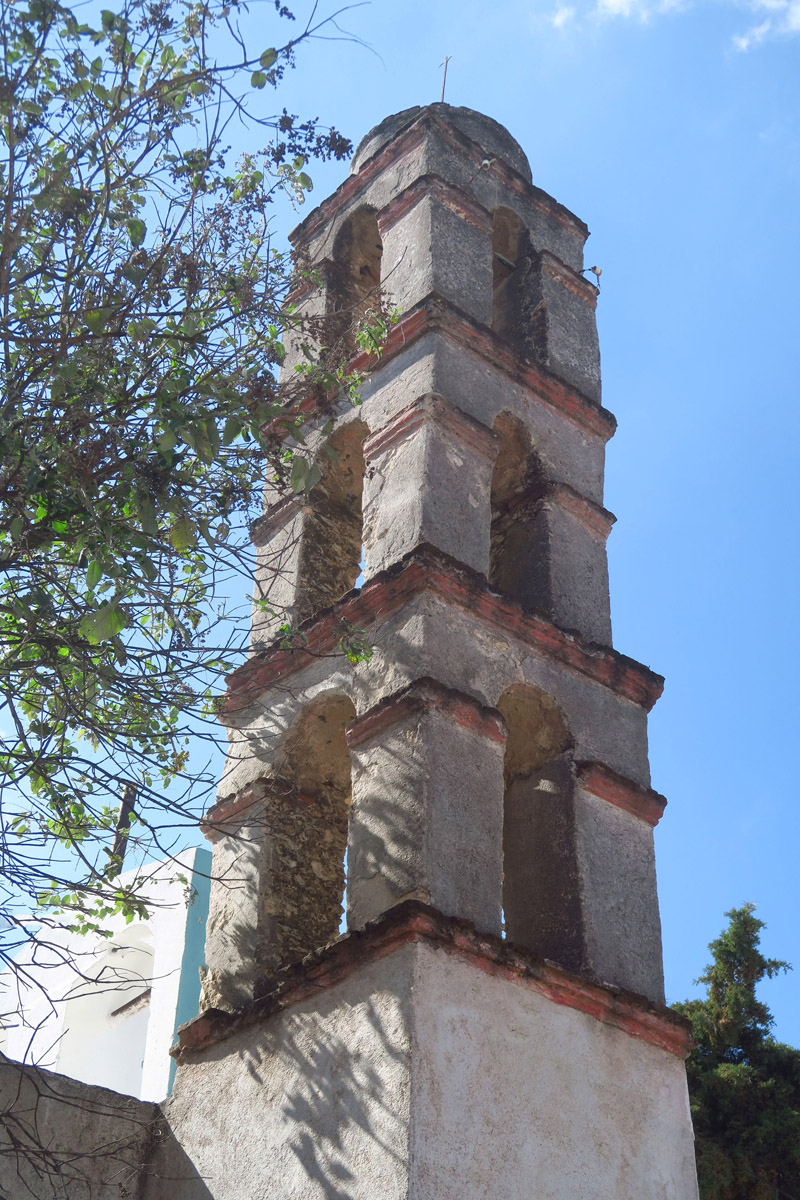 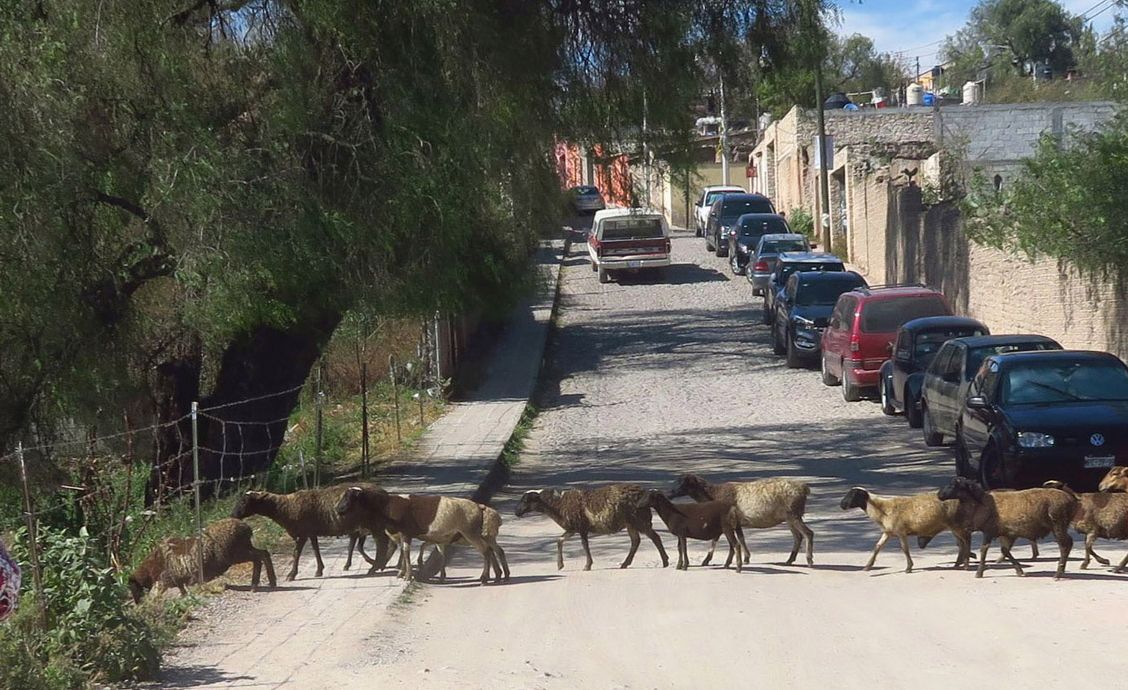 Some Magic Towns are more “magic” than others, however. There are those towns like San Cristobal de las Casas that are worthy of repeat visits, time and time again offering up some new scenic or cultural discovery. And then there are those smaller villages like Mineral de Pozos where I am grateful for the opportunity to have visited, but I am not sure I’d make a second trip. This is owed in part to my admittedly self-limiting attitude, “You’ve seen one mining town, you’ve seen ‘em all.” But not necessarily the case where the mines are over 400 years old. 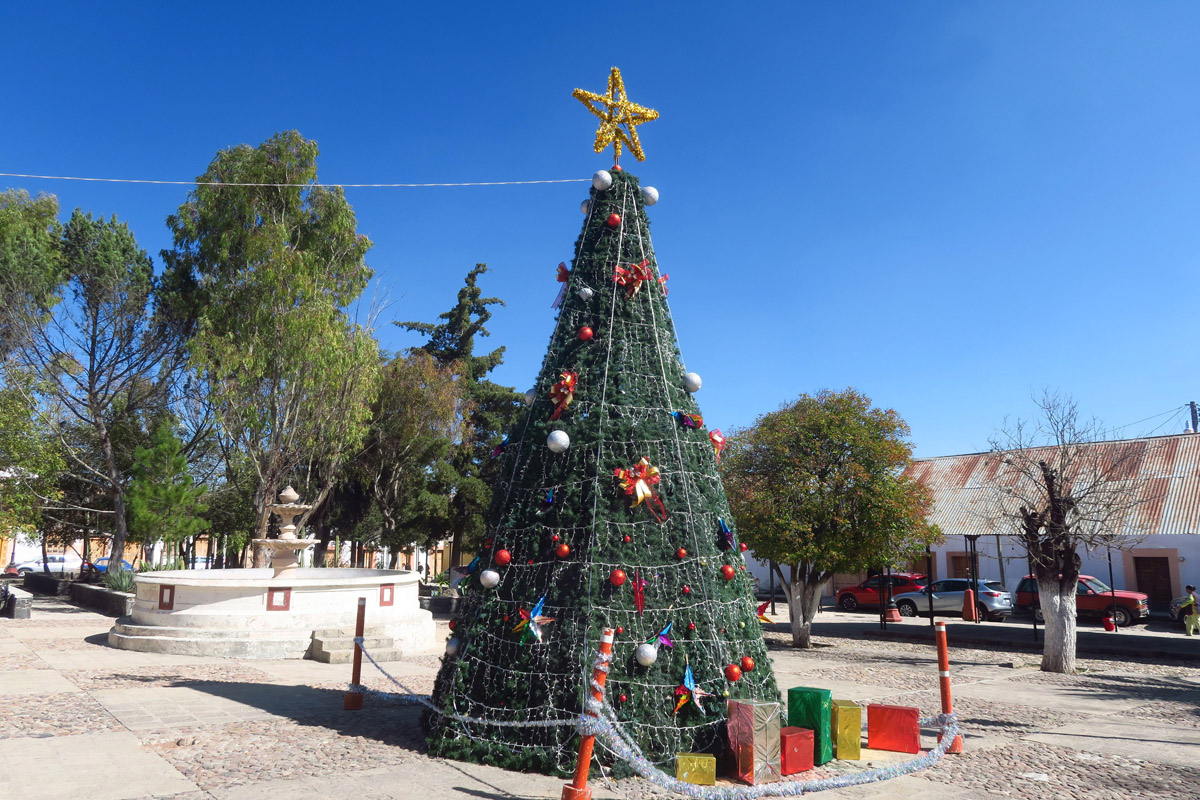 Christmas decorations still prominent no matter how small the town. 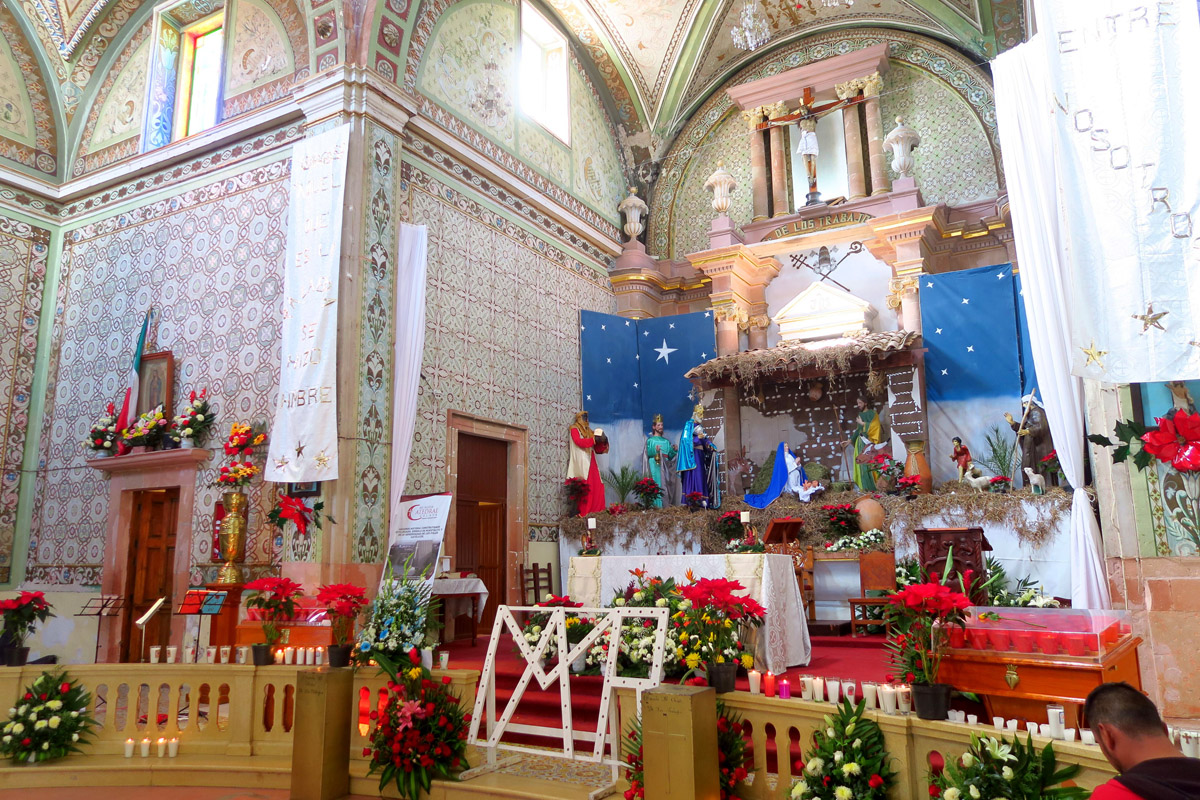 San Pedro church all decked out for the virgin birth. 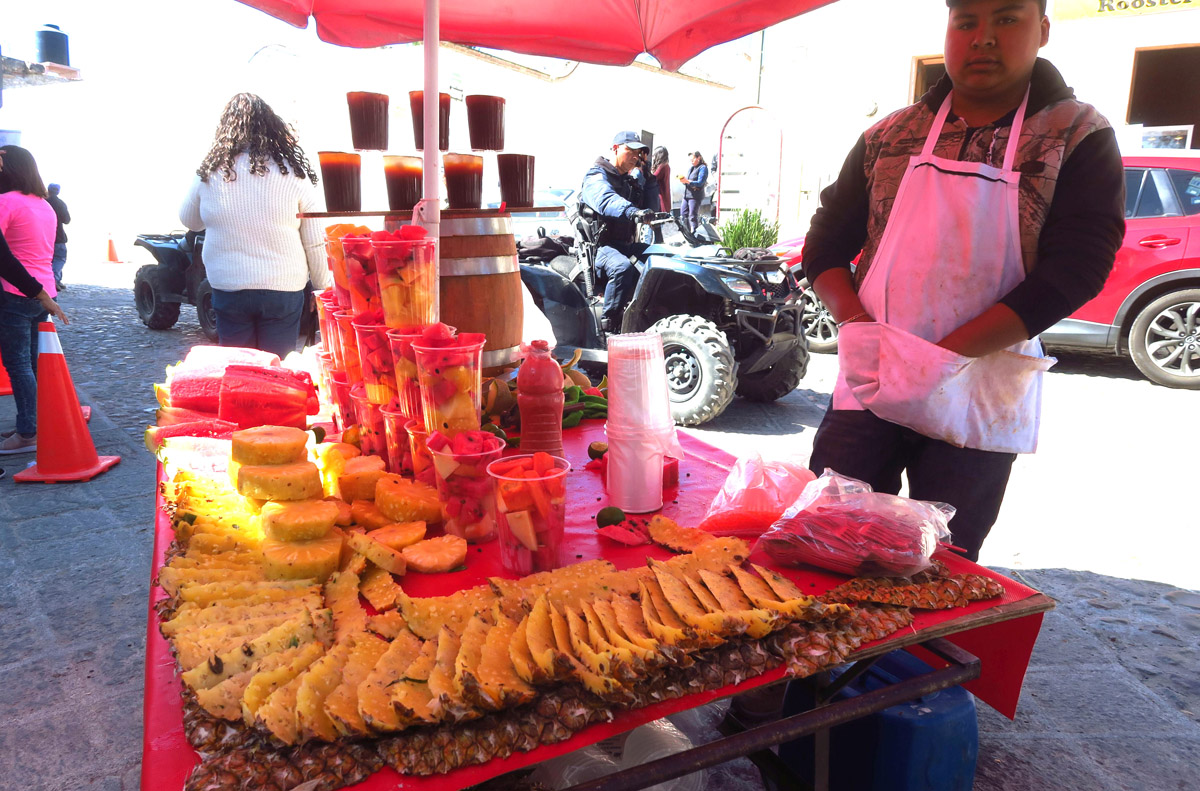 I like how this man has used the peelings from the watermelon and pineapple to decorate his display. Excellent use of recycling.

The town of Mineral de Pozos (which translates to “Mineral Wells”) is located in the state of Guanajuato about a 45 minute drive northeast of San Miguel de Allende. It’s one of the newer Pueblos Magicos, only being inducted into the program in 2012. It’s a sleepy little town…until that is, you reach the main square. Then be prepared to be accosted by touts and tour guides, each trying to convince you that their tour is better than the next guy. This may have been in part because we visited on the Sunday between Christmas and New Years, prime season not only for us foreign tourists, but Mexican tourists as well. No doubt if we had the opportunity to visit during a less busy time, there would have been fewer touts lying in wait. 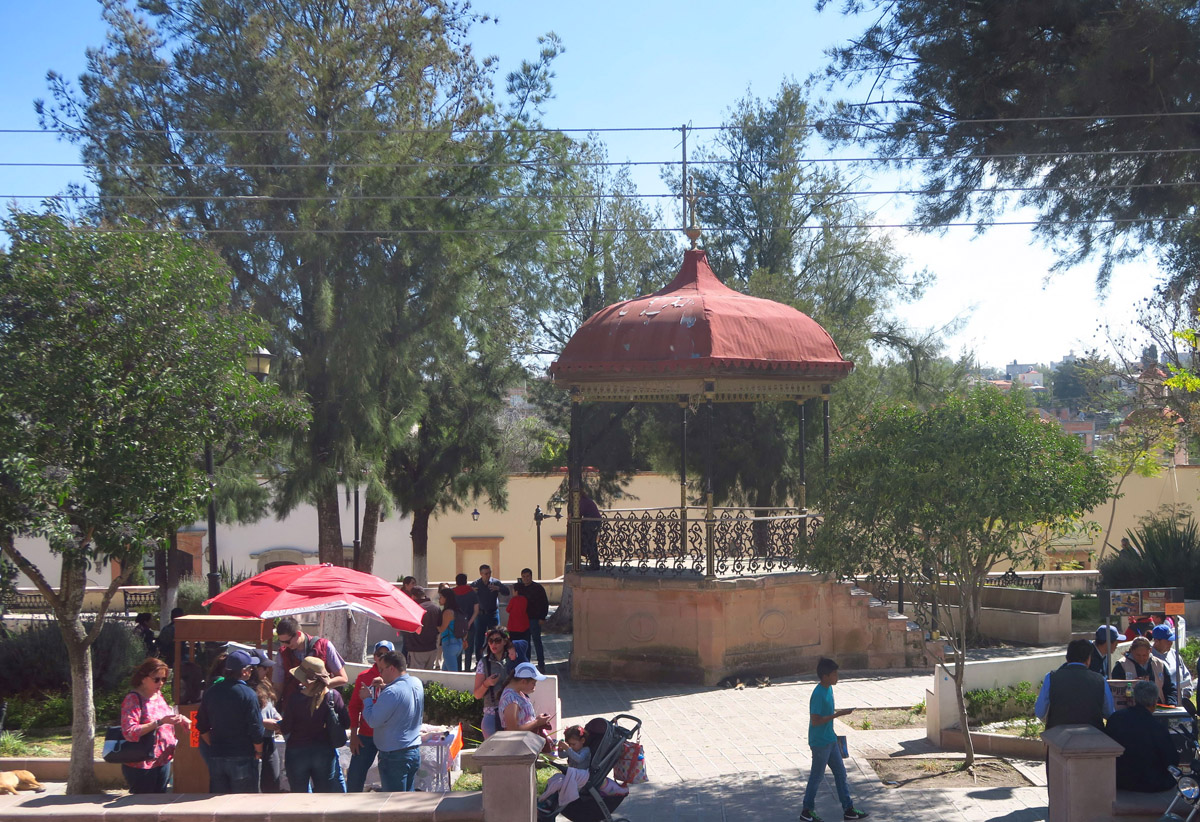 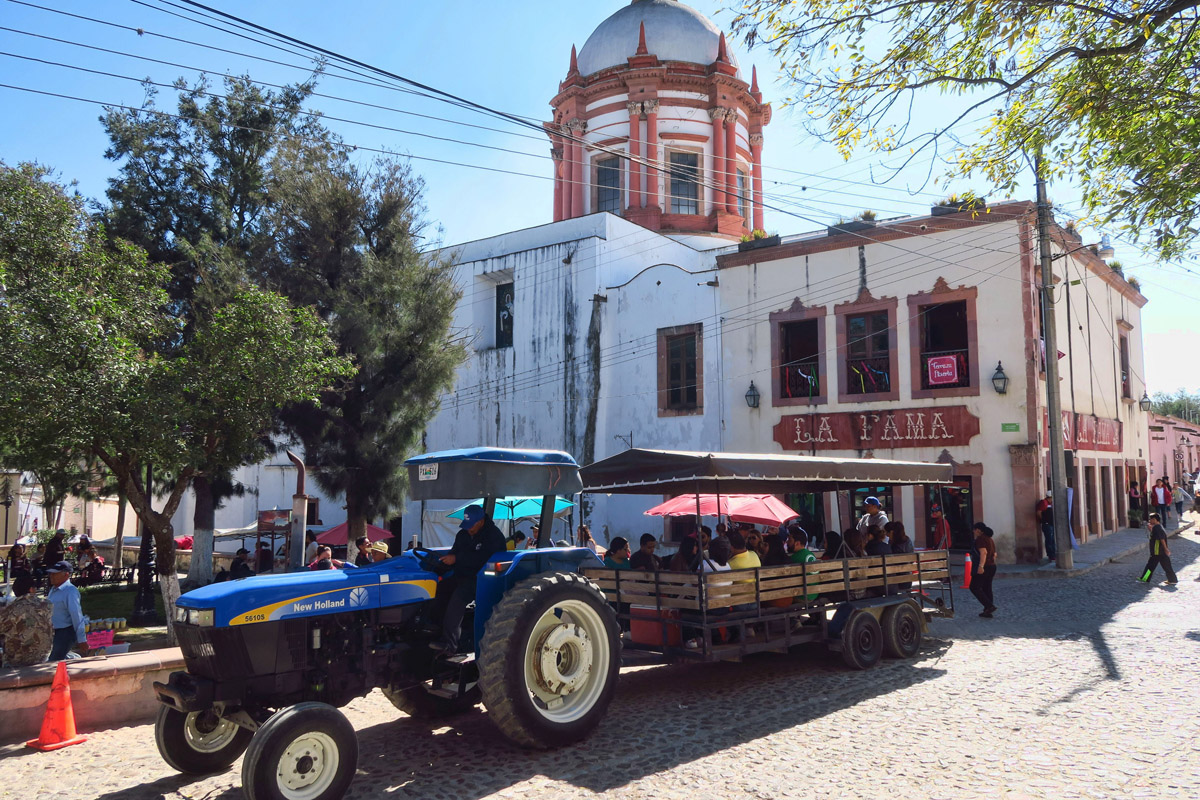 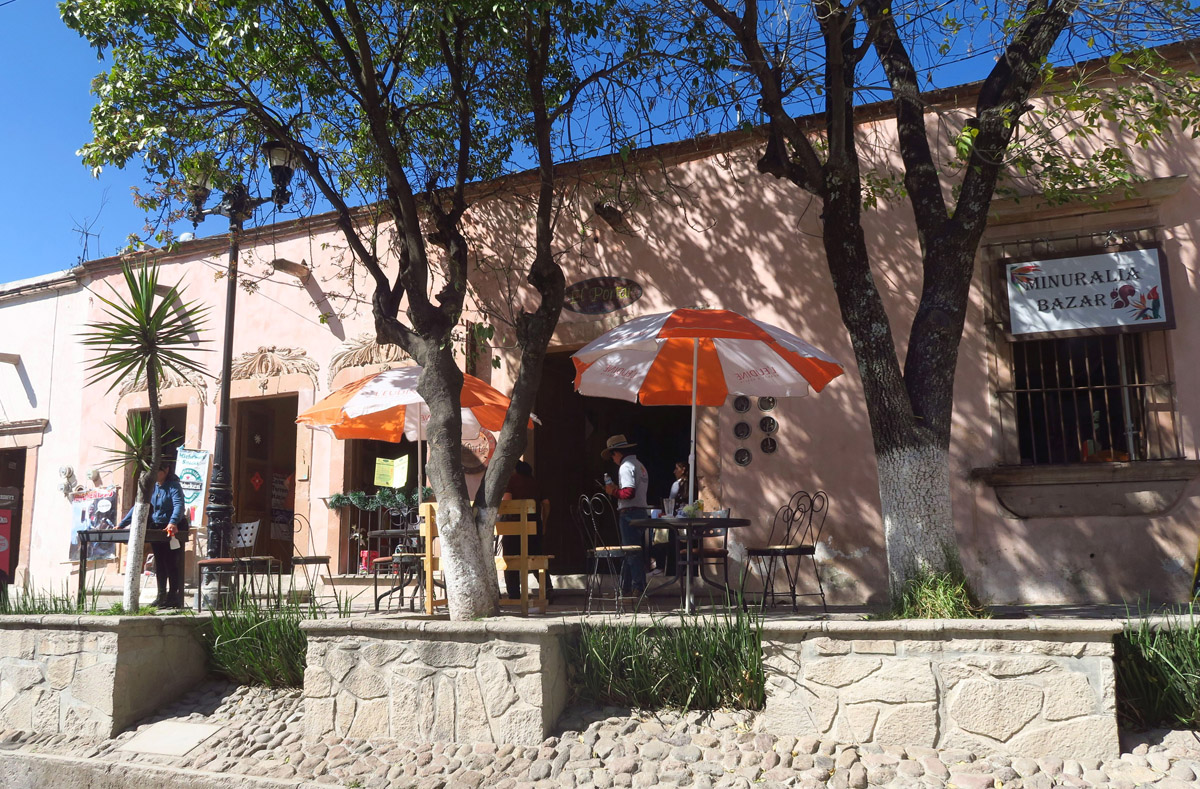 Some small sidewalk cafes around the square. 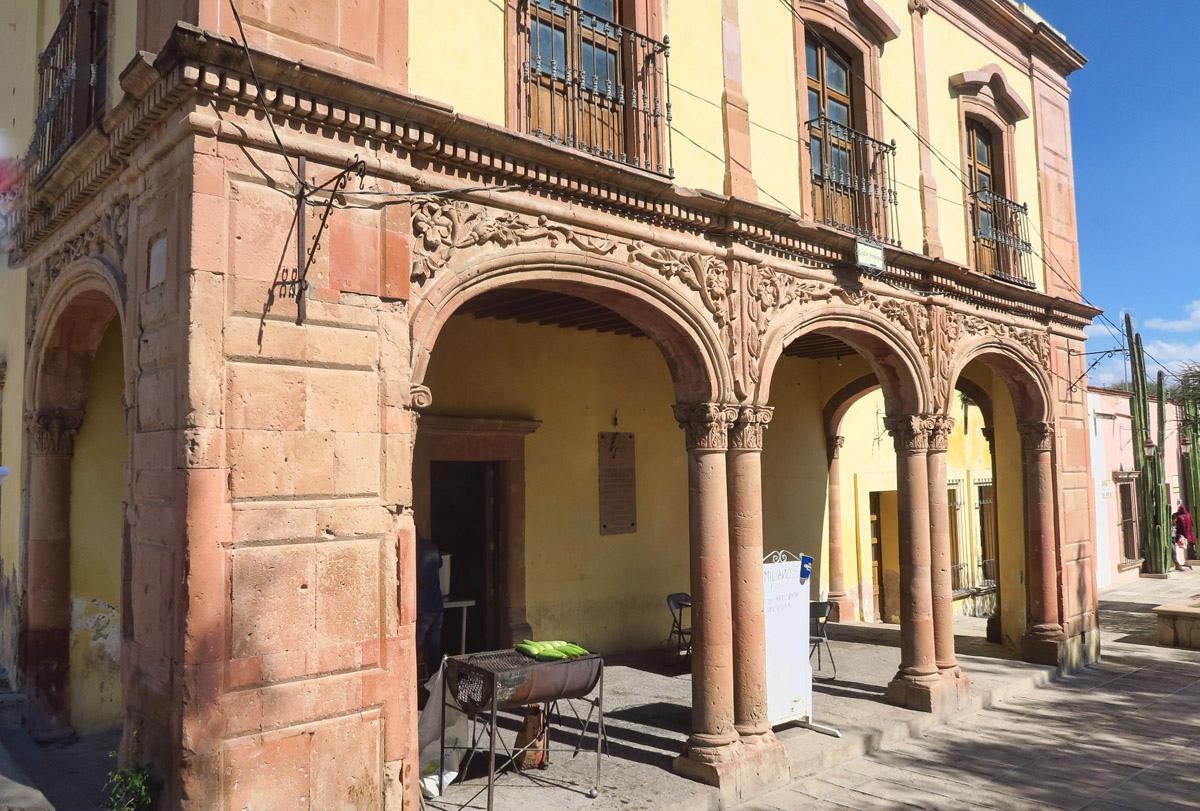 Roasting corn on the cob for sale beneath the arco.

But the gimmicks seem disproportionate to the attractions. For example, when we first rolled in to the small square in town, we pulled in behind the rustic open air trailer filled with tourists. We assumed it to be the local “tramvia,” the typical version of public transport often found in Mexican towns offering an affordable overview of the town. However, further review revealed it to be the “Trac-Tour,” a gimmicky tour company offering an adventure ride pulled behind a tractor. Then there is the “Green Bus” tour. And two big fancy Sprinter vans. Even the local parking attendant has a tour he wants to sell you… 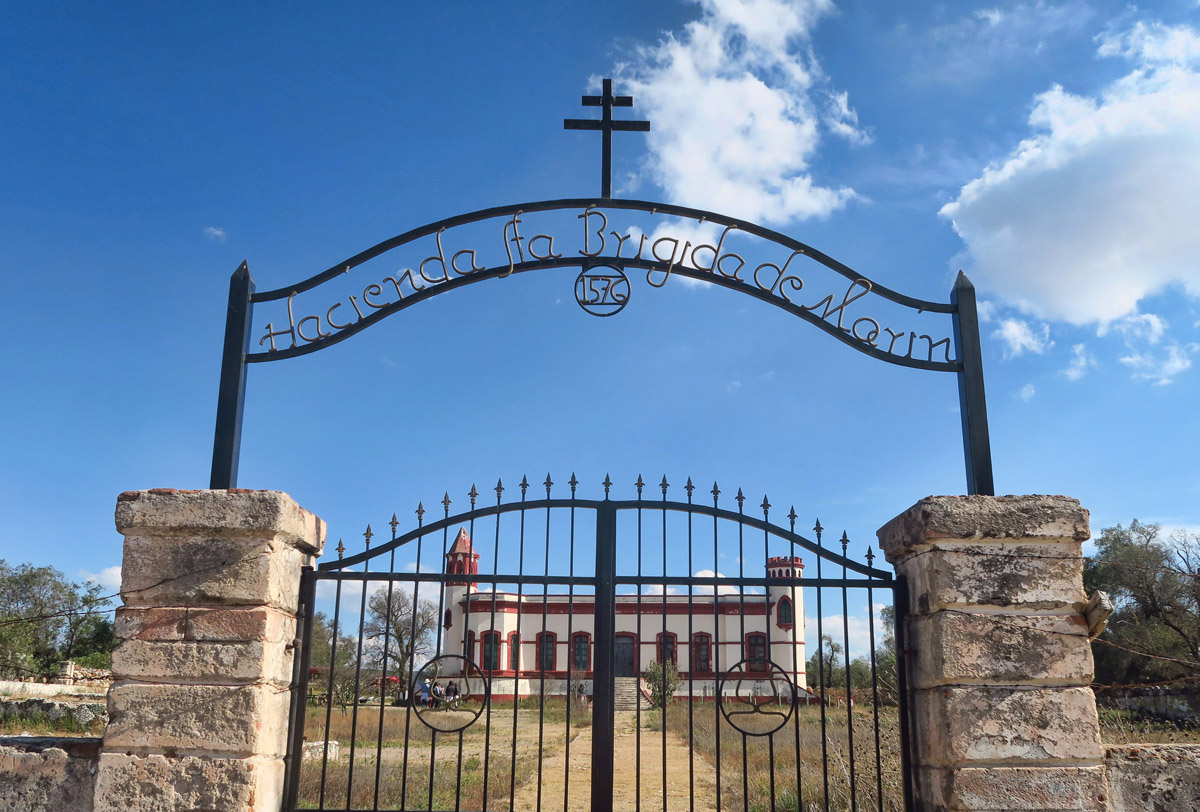 Hacienda Santa Brigida, founded by the Jesuits in 1576. 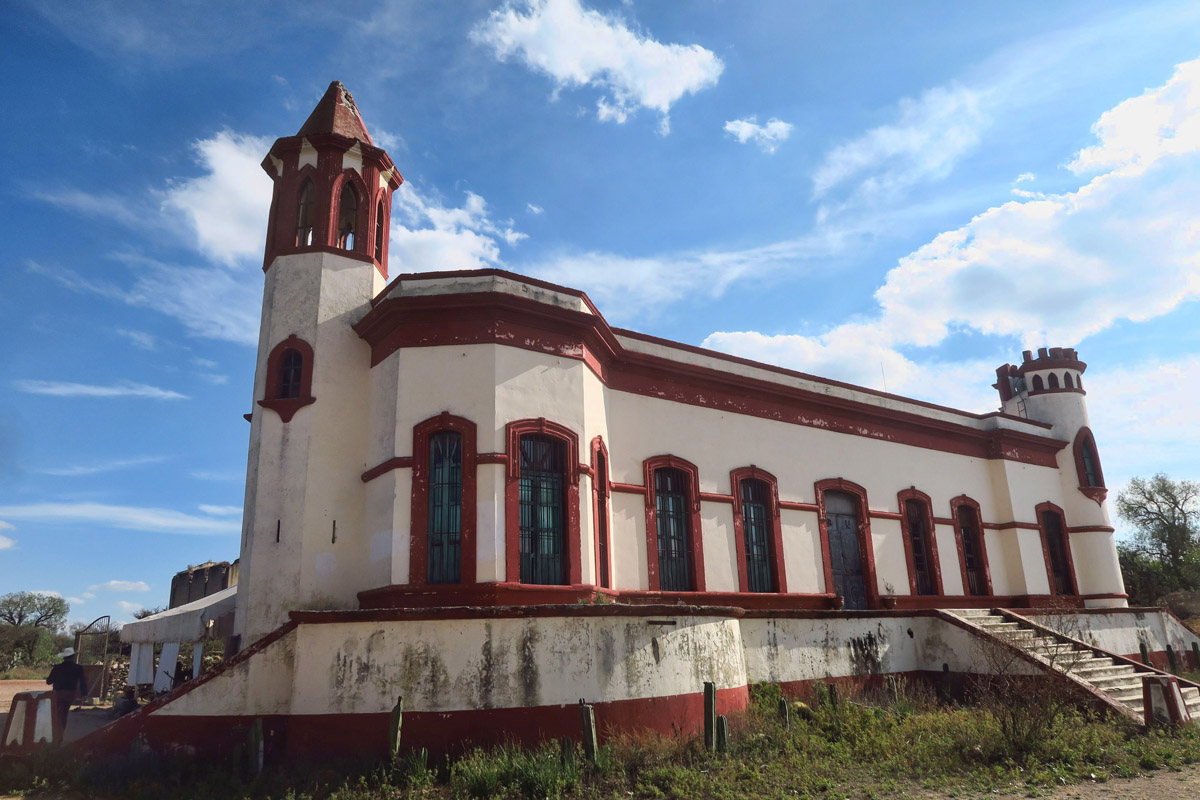 The Hacienda is on the grounds of a large, abandoned mining area. Unfortunately the house itself is closed to the public. 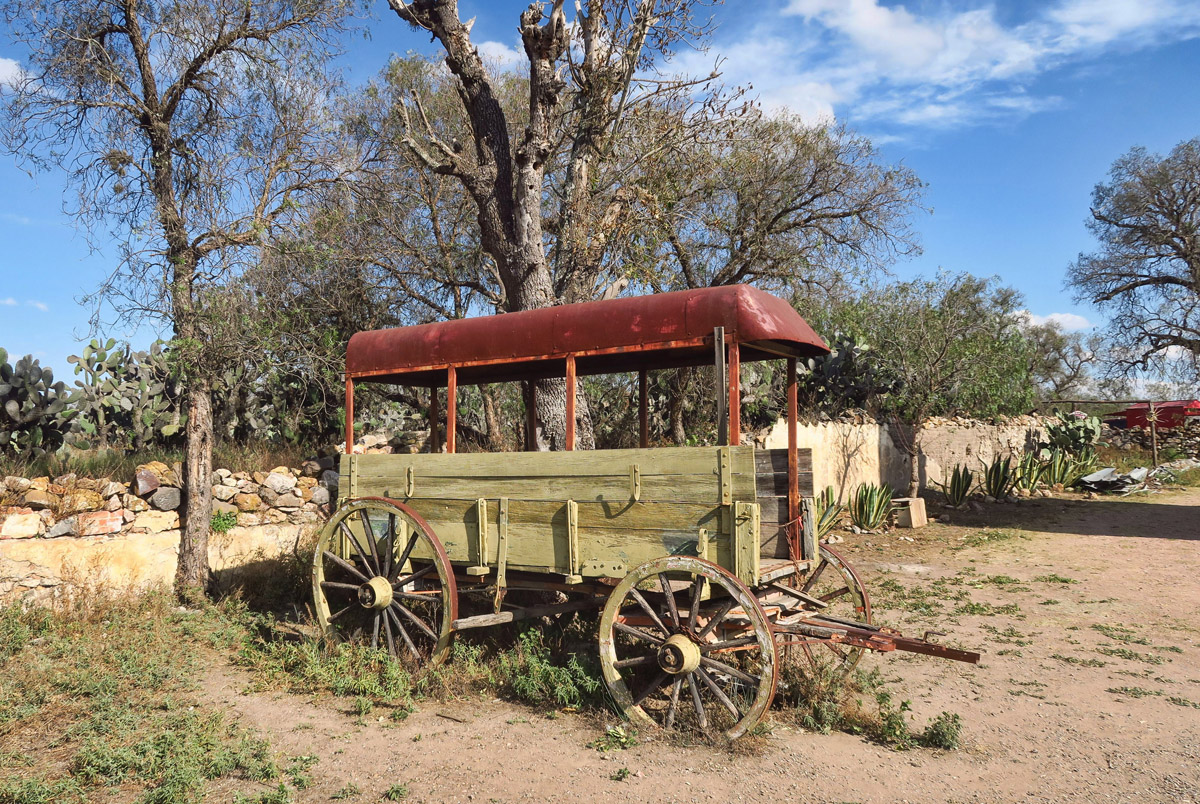 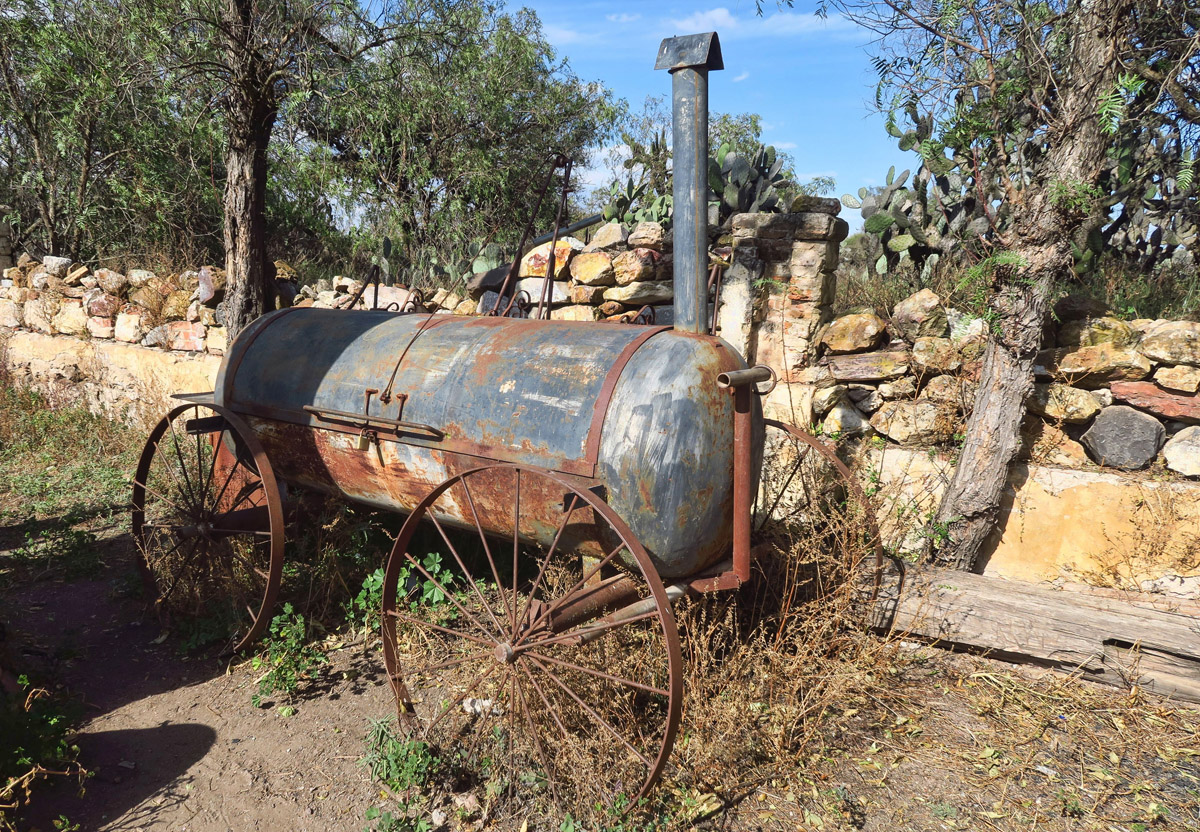 In the end, we decide to go it on our own, but finding a map, or even list of attractions is no easy task. Finally, we locate the modern Museo de Historia de Mineral de Pozos, or local history museum, where we are able to obtain a town map and directions. The helpful museum attendant directs us to Santa Brigida Hacienda, oldest of the mines, along with Los Hornos, its three cone shaped smelting ovens whose image graces the Mineral de Pozos tourism brochure. These stone ovens were where gold and silver-bearing ore was ground, heated, and leached extracting the minerals. 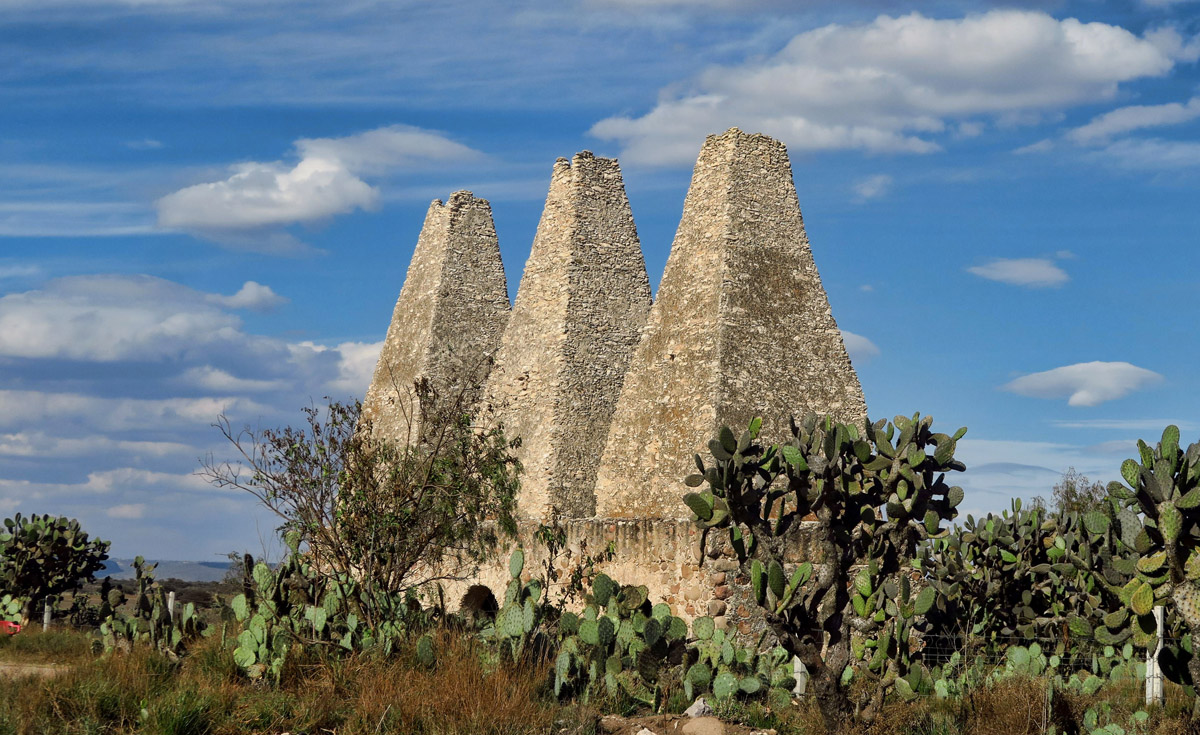 These three ovens are where the silver was extracted from the ore. We were short on time, so opted to tour without a guide, but overheard words “lead” and “mercury.” No wonder life expectancy was so short back then! 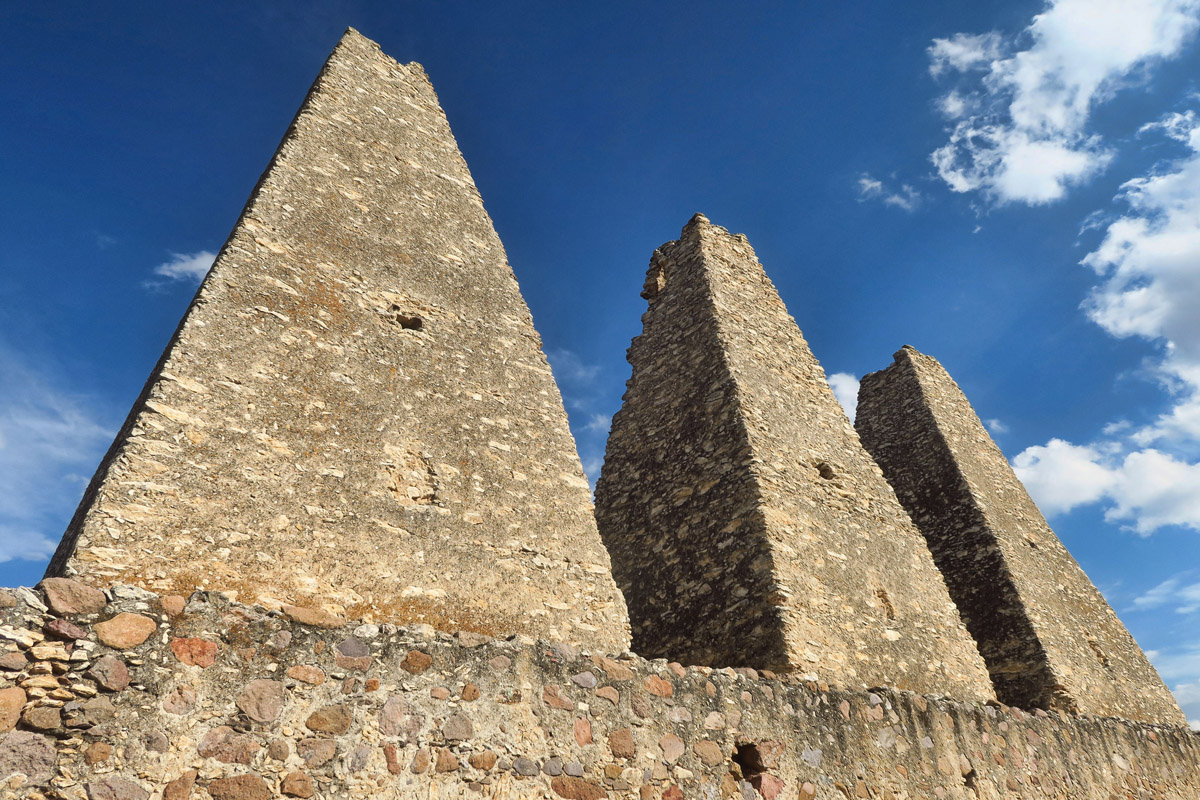 The iconic brick ovens grace the front of the map and Pozos tourism brochure. 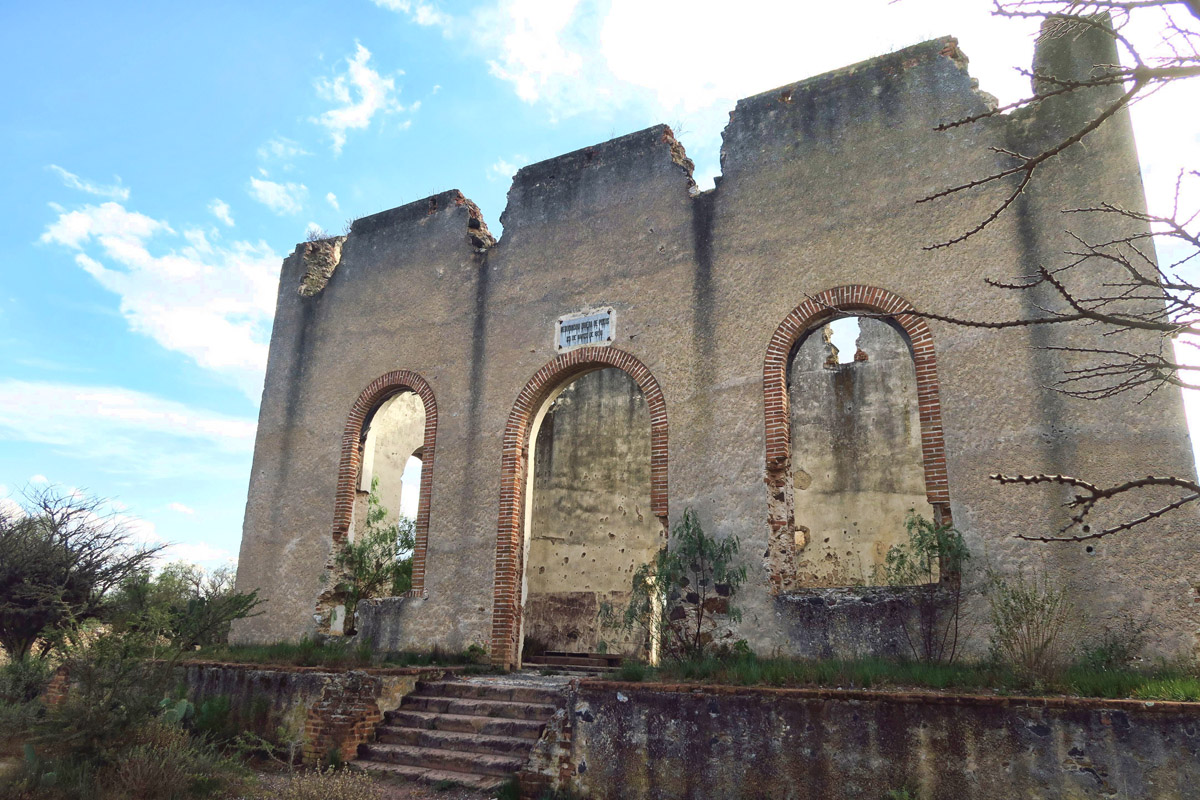 I thought the town of Mineral de Pozos itself was the “ghost town” until we saw the complex at Santa Brigida. 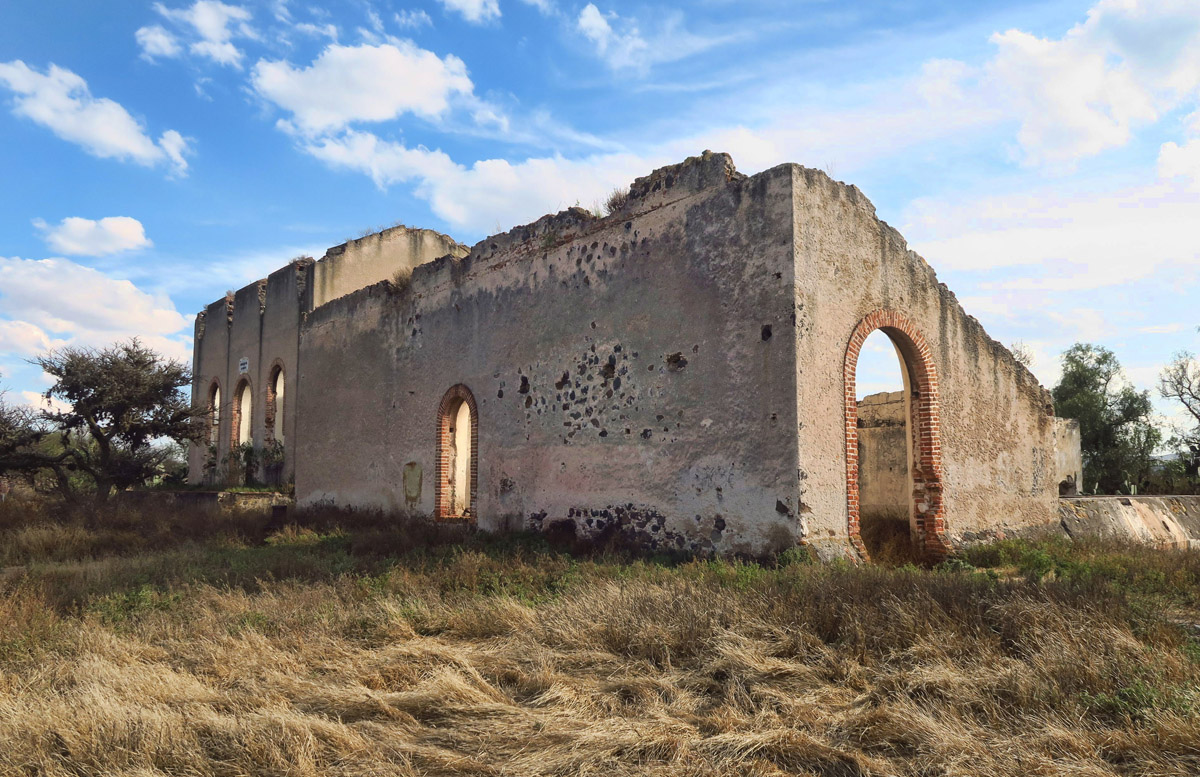 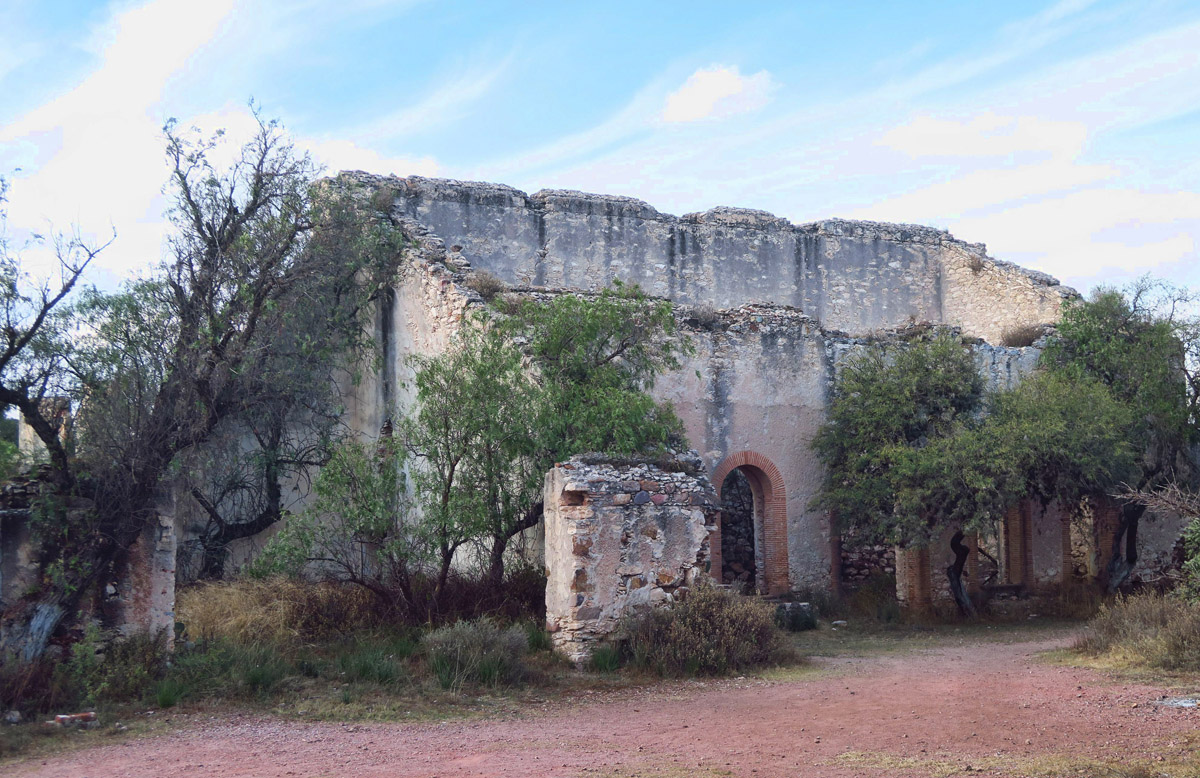 It would be interesting to know what these old structures were, but given the pop dwindled down to 200 at one time, I suspect no one really knows… 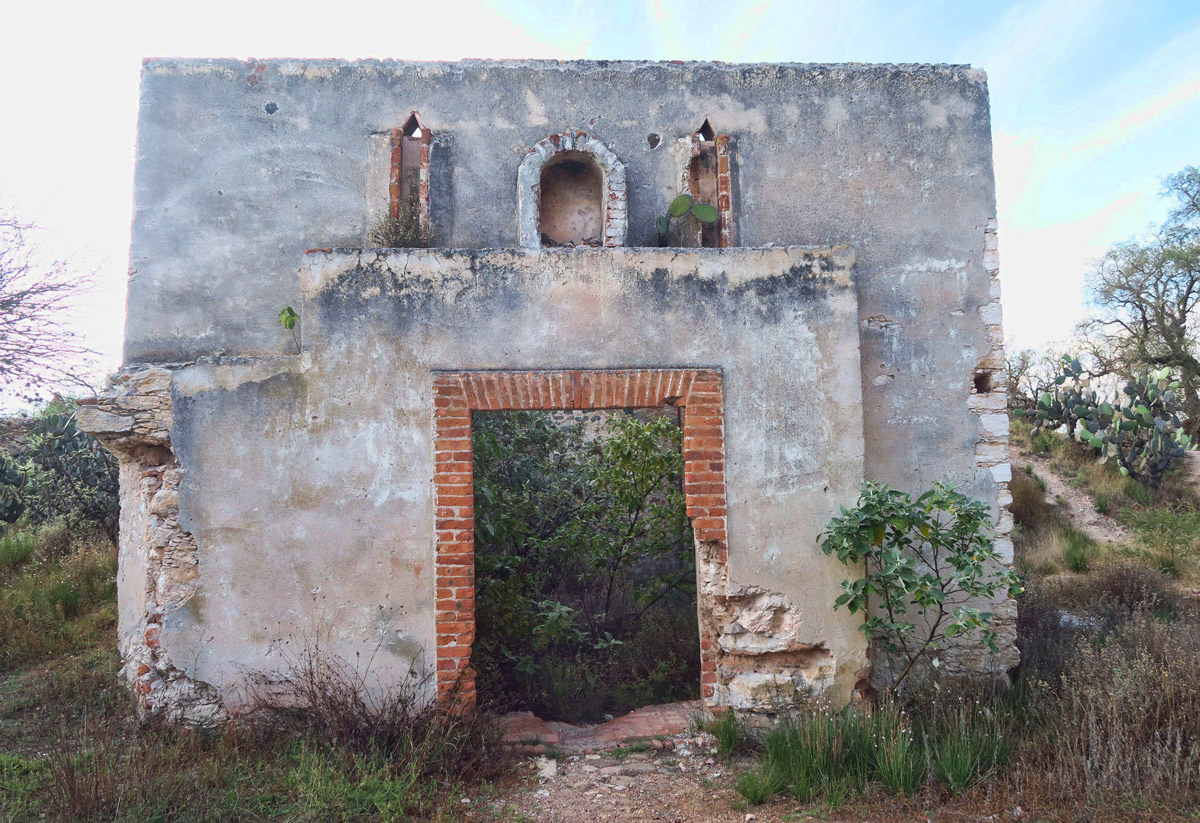 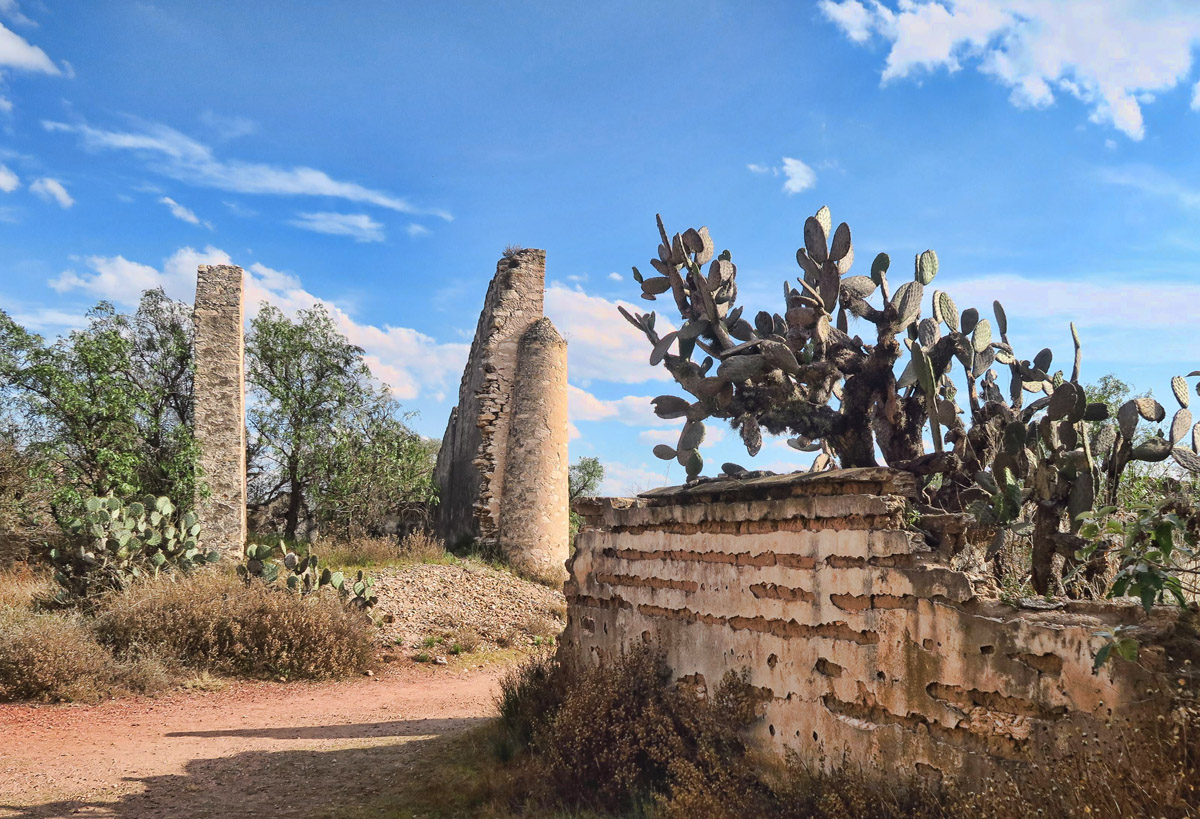 I think the structure on the left must have been part of an aqueduct.

While most towns in Mexico are riotous with color, the storefronts and walls of Mineral de Pozos appear faded in muted pastels of buff, beige, and pale, dusty pink, lending to its sleepy vibe. The town was founded in the 1500’s following the discovery of gold and silver veins. In the height of the mining days in the late 19th century, the population was believed to have reached 70,000. With the decline of the mining industry, that dropped to as low as 200 people by the 1950’s, earning the town its designation as a “Ghost Town.” 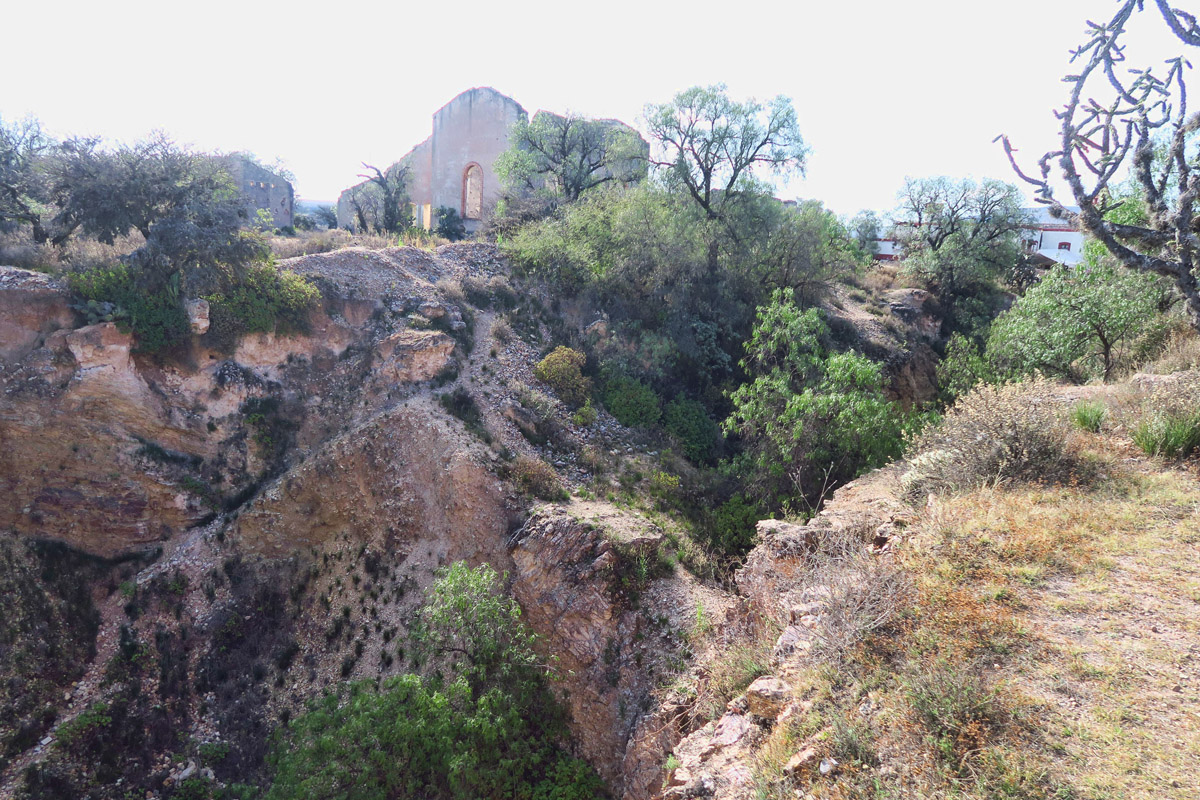 There are collapsed tunnels, caves, and pits all over the complex, leftover from the days of open-pit mining. One must tread with caution. 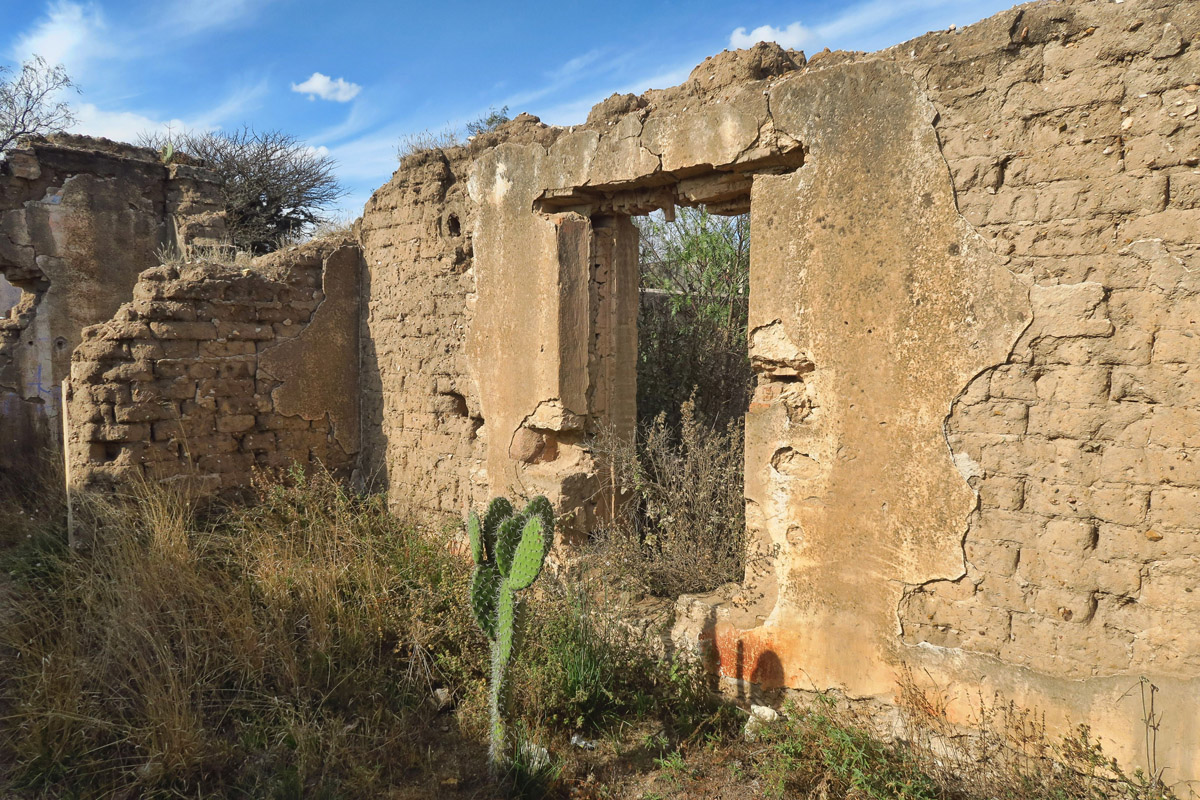 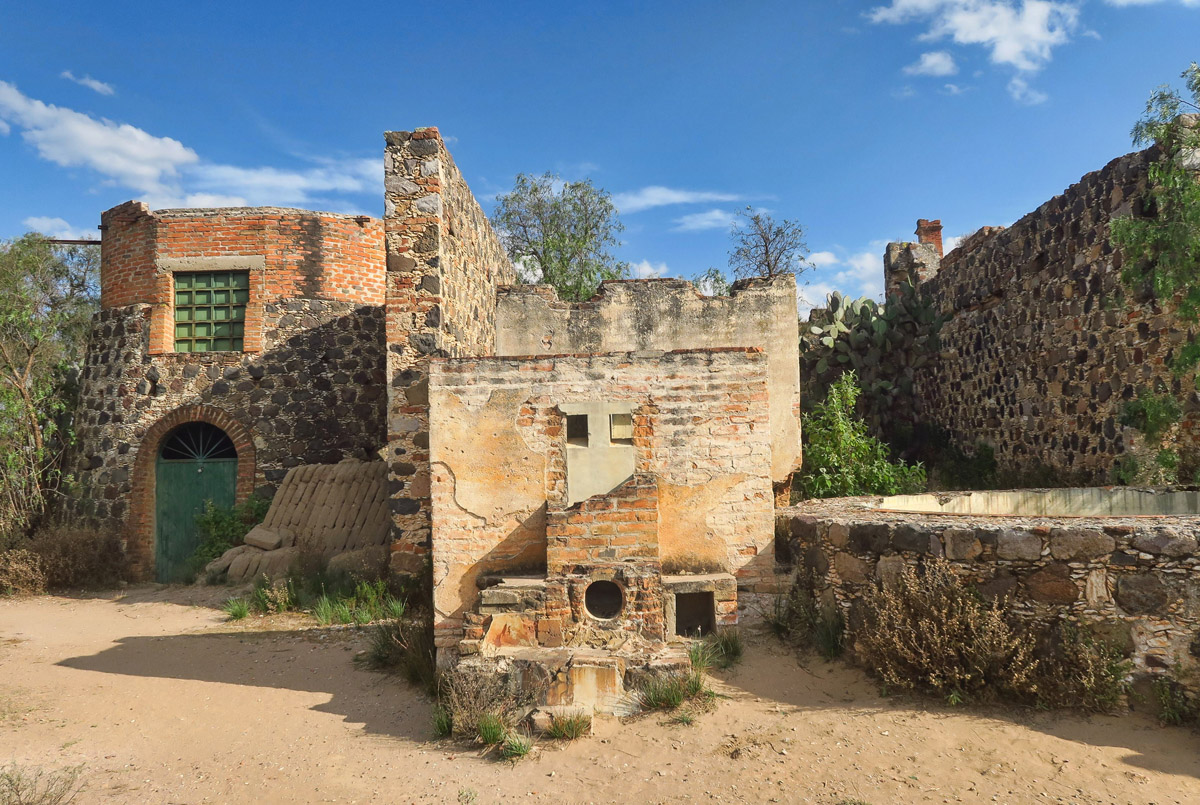 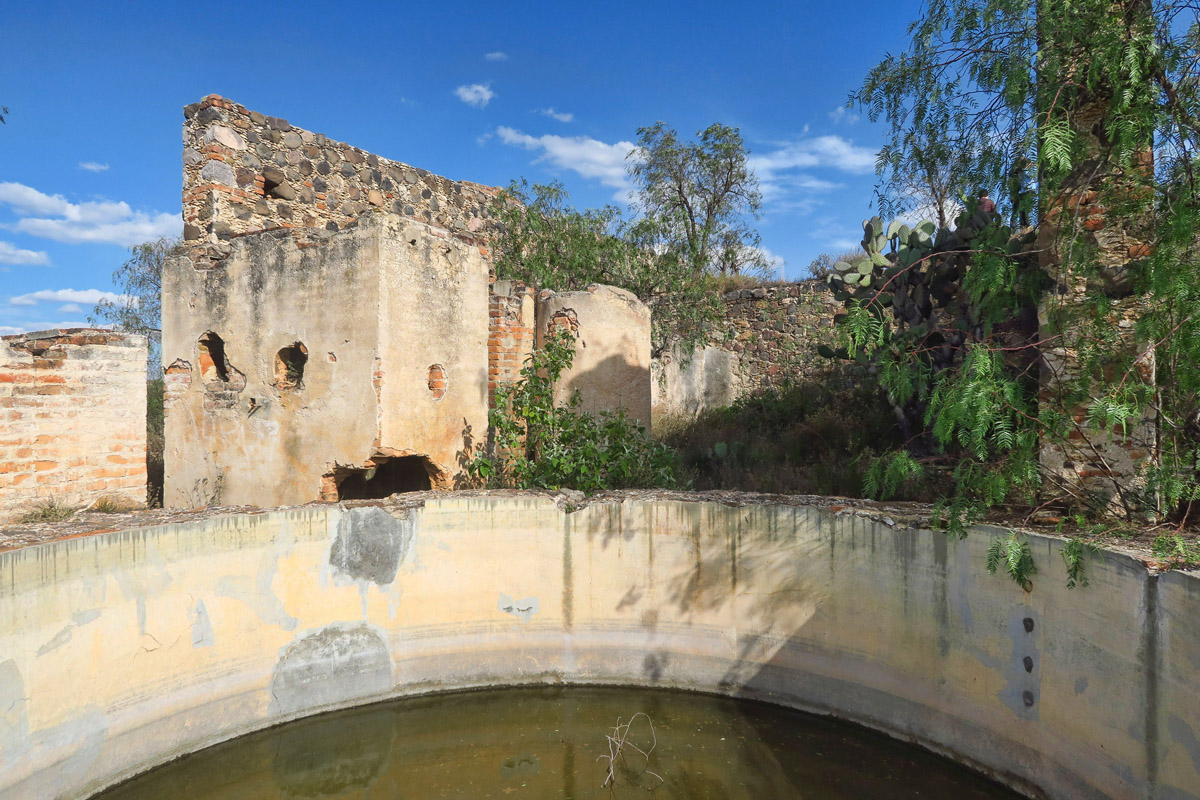 One of the many cisterns on the property.

Some say Mineral de Pozos is on the verge of resurgence as an artist community. Expats are moving in opening art galleries, while a couple of small Inns and even a spa and nearby lavender farm have opened up. Some compare it to what San Miguel de Allende was eighty years ago. But tourism appears to be the only game in town, so hopefully, the Pueblo Magico status will help lead to slower organic growth of quaint charm rather than be overtaken by the desperation and aggression of the touts in the town square. 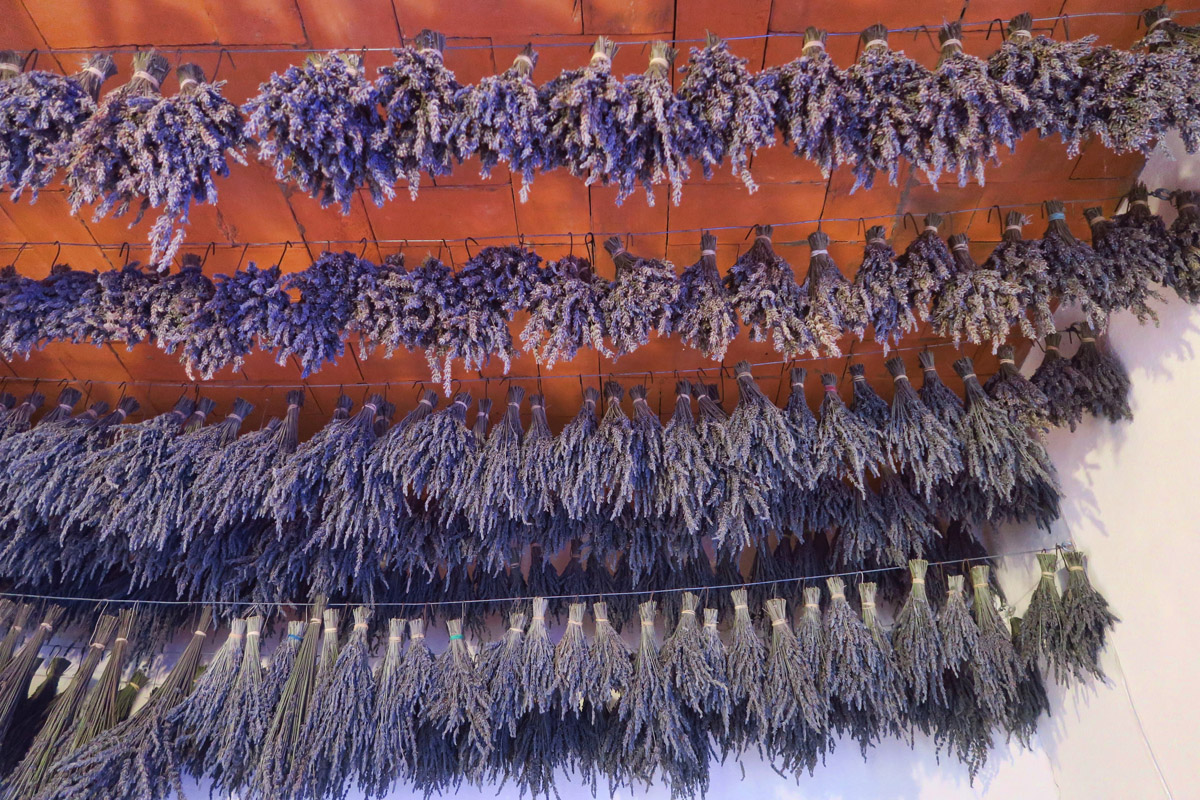 Heading out of Pozos, we stop at a lavender farm. These bunches are hanging from the ceiling. You can’t imagine how good this room smells! 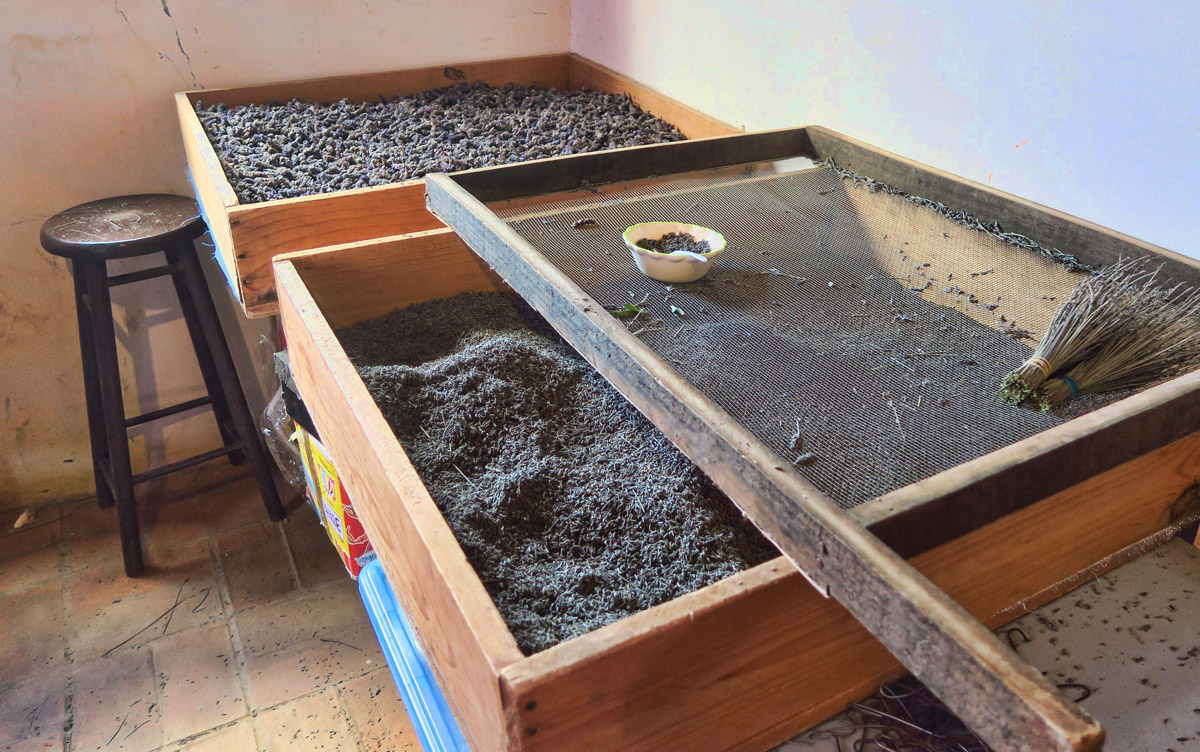 Sifting out the lavender buds by hand