Day Six rolls around, and already I am starting to get that feeling that the end is upon us.  Time is going way too fast, and there is no way, no matter how hard I try, to slow it down. Every moment is precious, from the quiet mornings up on the teak deck, still wet beneath my bare feet from the morning dew, to the near-full moon shimmering on the water, casting enchanting moon shadows across the surface until I can’t keep my eyes open any longer. I don’t want it to end. It’s that old catch-22 dilemma of not wanting to spend my last couple of days feeling sad, but not being able to stave off sadness because we are careening toward the end. 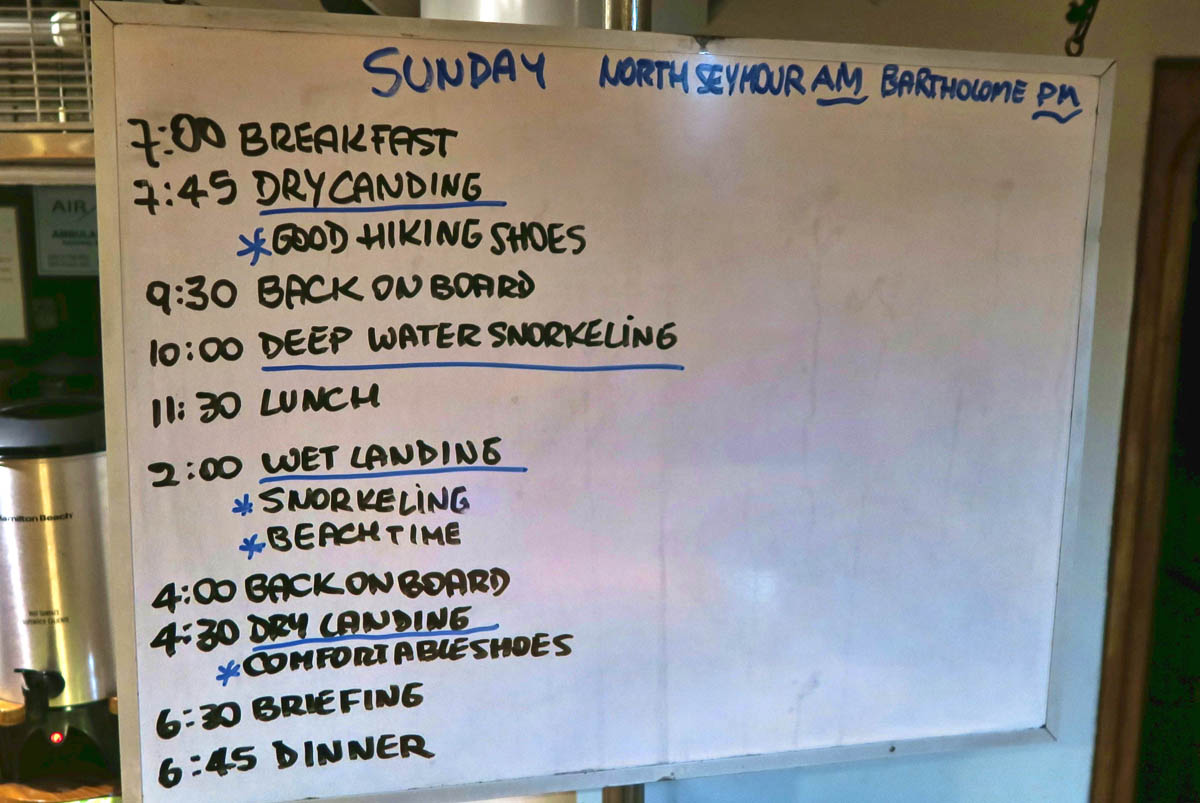 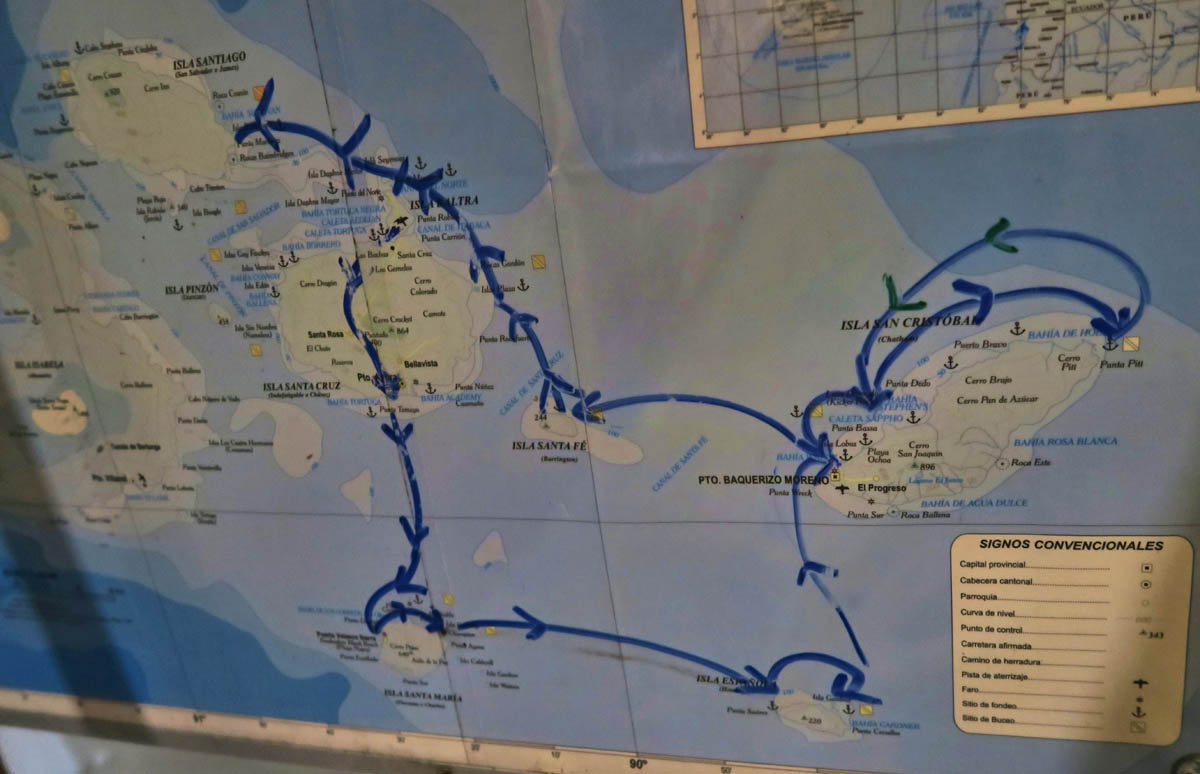 Today is going to be a busy day, which will make the time fly even faster. We typically have three activities throughout the course of a day, but today, we have four. We will start our day off the shore of North Seymour, an island that has been closed to visitors for a while.

North Seymour is a small island just north of Baltra, where the airport is located. It’s heavily populated with seabirds and over 2,500 land iguanas. But twice now in recent history, it has fallen prey (literally) to…eeek!!…rat infestation! They swim over from nearby Baltra. Who knew rats could swim? Not only do they eat bird eggs and small iguana and turtle hatchlings, they also compete for the wildlife’s food source, eating plants and seeds. So the island has been closed while they work to eradicate them. It’s only been reopened now for about a week. Good to know the coast is clear! 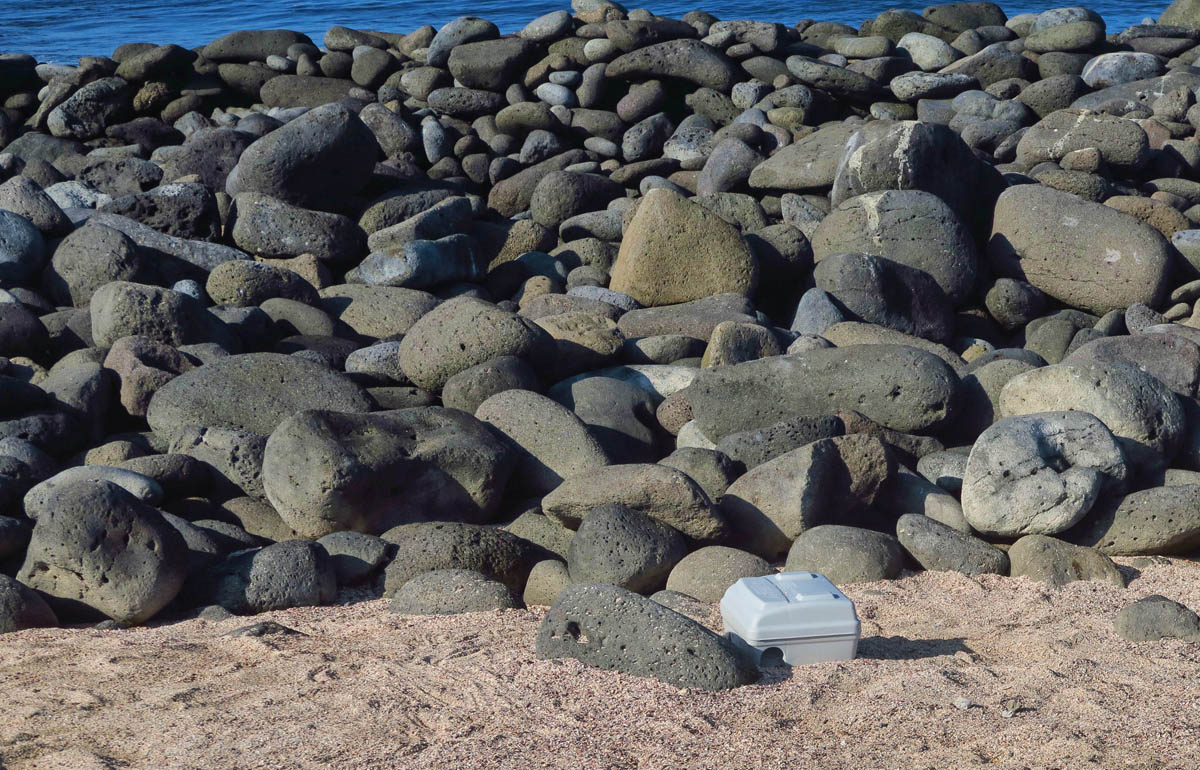 Coming ashore on North Seymour, we see one of the devices left behind to measure the effect of their recent rat eradication.

As I mentioned before, every island seems to have its own “feature,” something unique to offer. On the island of North Seymour, it’s frigate birds, and we will be doing a loop hike through the largest colony in the Galapagos.

There are two types of frigate birds, their names sounding quite boastful…the “Magnificent Frigate” identified by a purple sheen on his feathers and a blue circle around the female’s eye, and the “Great Frigate” having a green sheen to his feathers and a red circle around the female’s eye. As with the three similar species of Booby birds, the frigates avoid competition by feeding in different locations, with the Magnificents feeding along shore, while the Greats travel further out to sea to forage. 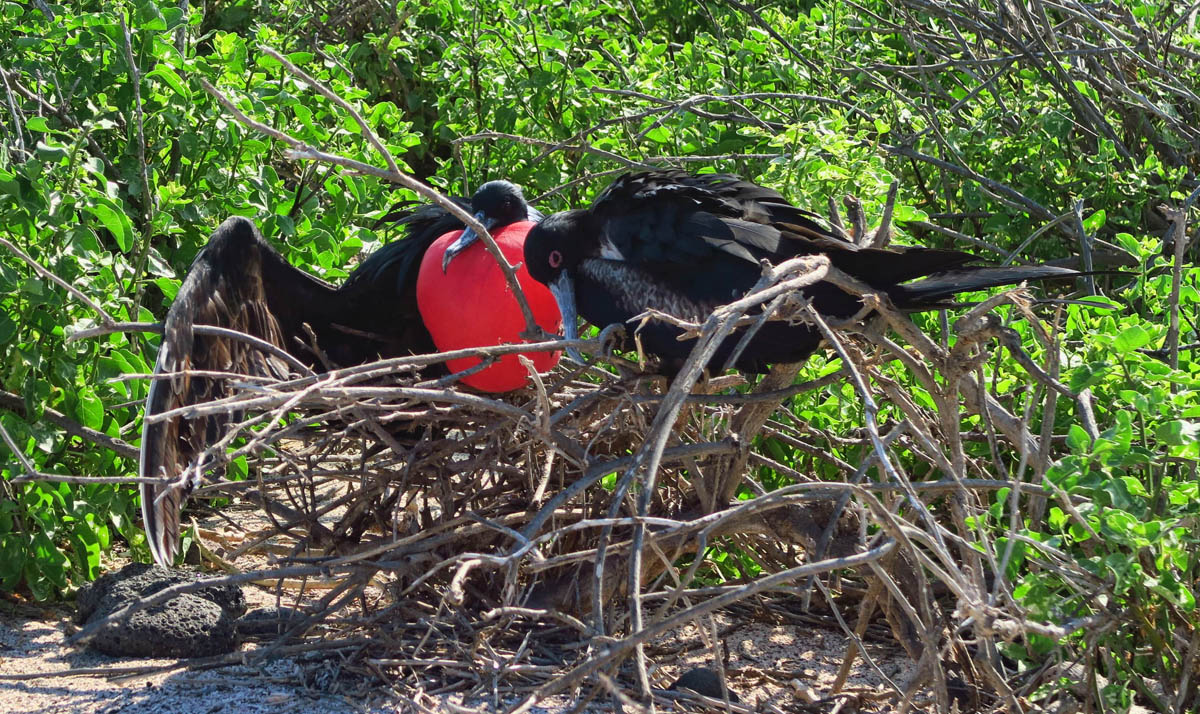 The loop hike on North Seymour goes right through the largest frigate bird colony in the islands. 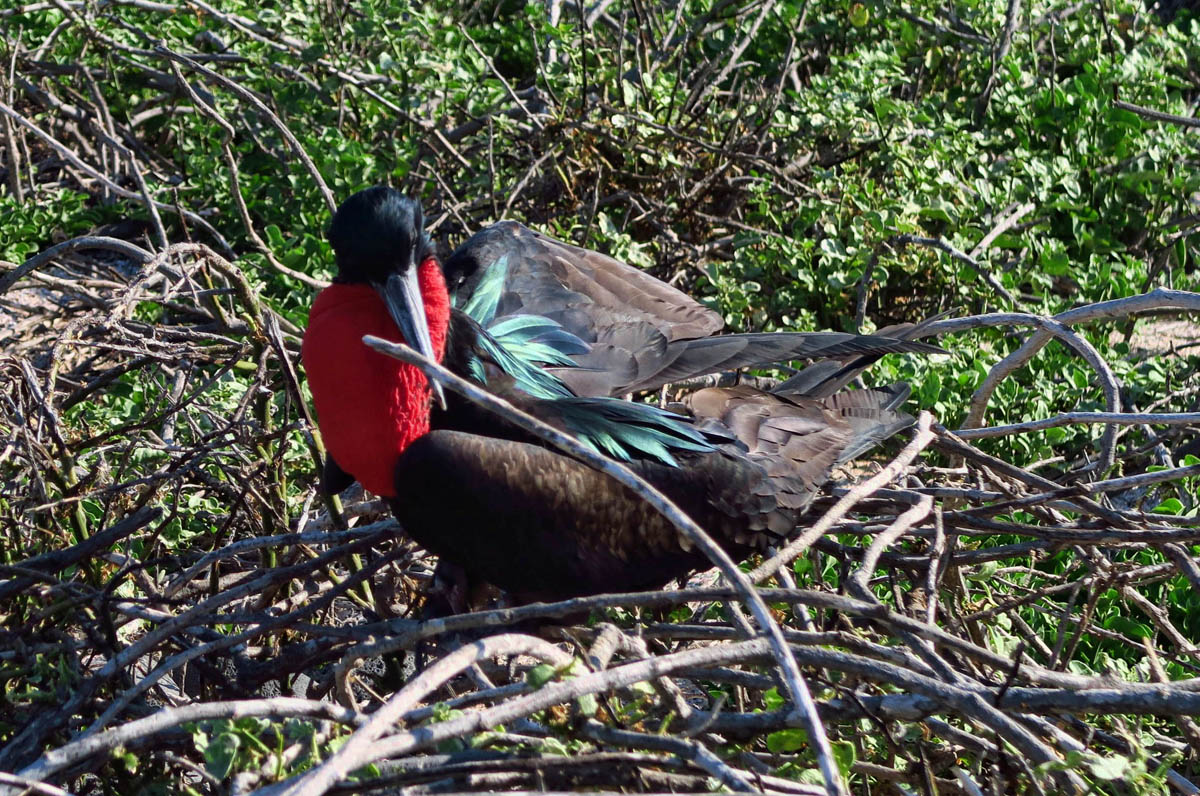 This red balloon pouch is inflated to attract a mate. 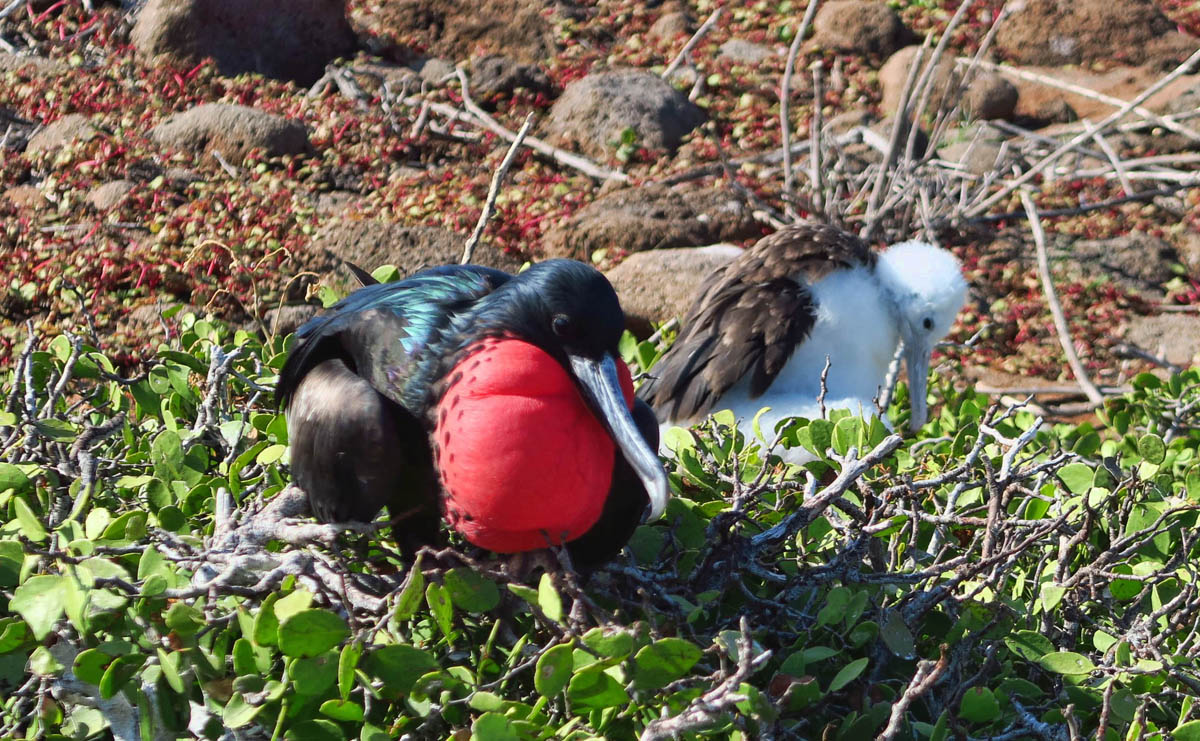 I think this is a juvenile on the right. Does that mean Daddy’s foolin’ around?

Just as I ask Fabian if a male can fly with an inflated pouch, this guy comes cruising by. (Hard to tell in the photo. He is headed toward the right, with his wings up over his head. Click on the photo to enlarge, then use the “browser back button” to return.) 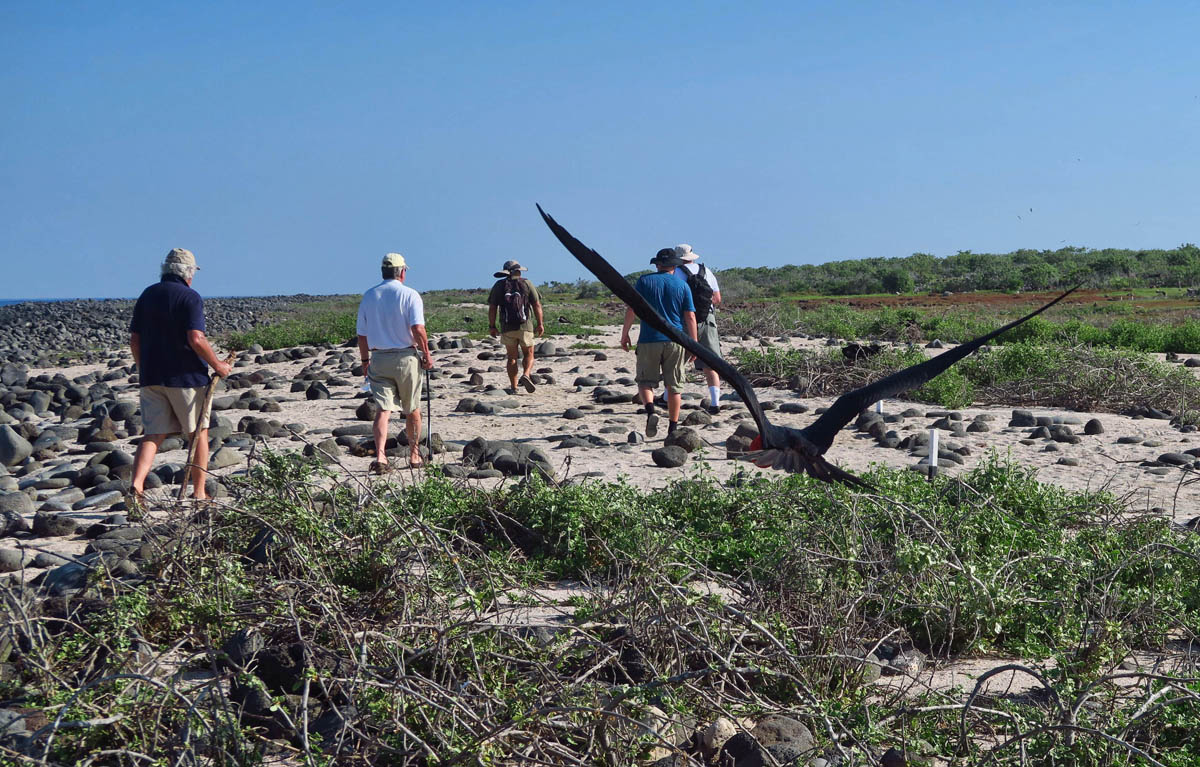 Here’s what it looks like to hike with birds…

Charles Darwin called the Galapagos frigate birds “the condors of the oceans,” because they have such large wingspans (largest wingspan to body weight ratio in the world) and can spend days and nights at a time “on the wing.”

Frigate birds have a small oil gland and lack weatherproofing on their feathers, so they must feed either on flying fish, or by stealing food from other birds, earning them the nickname of “pirate birds.” They do this by harassing them to the point of snatching them up by the tail feathers and shaking them around until they regurgitate. Thankfully, we were not witness to this feeding technique.

But the most distinguishable characteristic of the frigate bird is the male’s big red pouch, also known as a gular sac, which he inflates like a balloon to attract a mate, a process Fabian tells us takes about twenty minutes to inflate. The pouch puffed out on their chest looks almost heart-shaped. They use their beak against the pouch to make a drumming sound to attract females as they fly over. 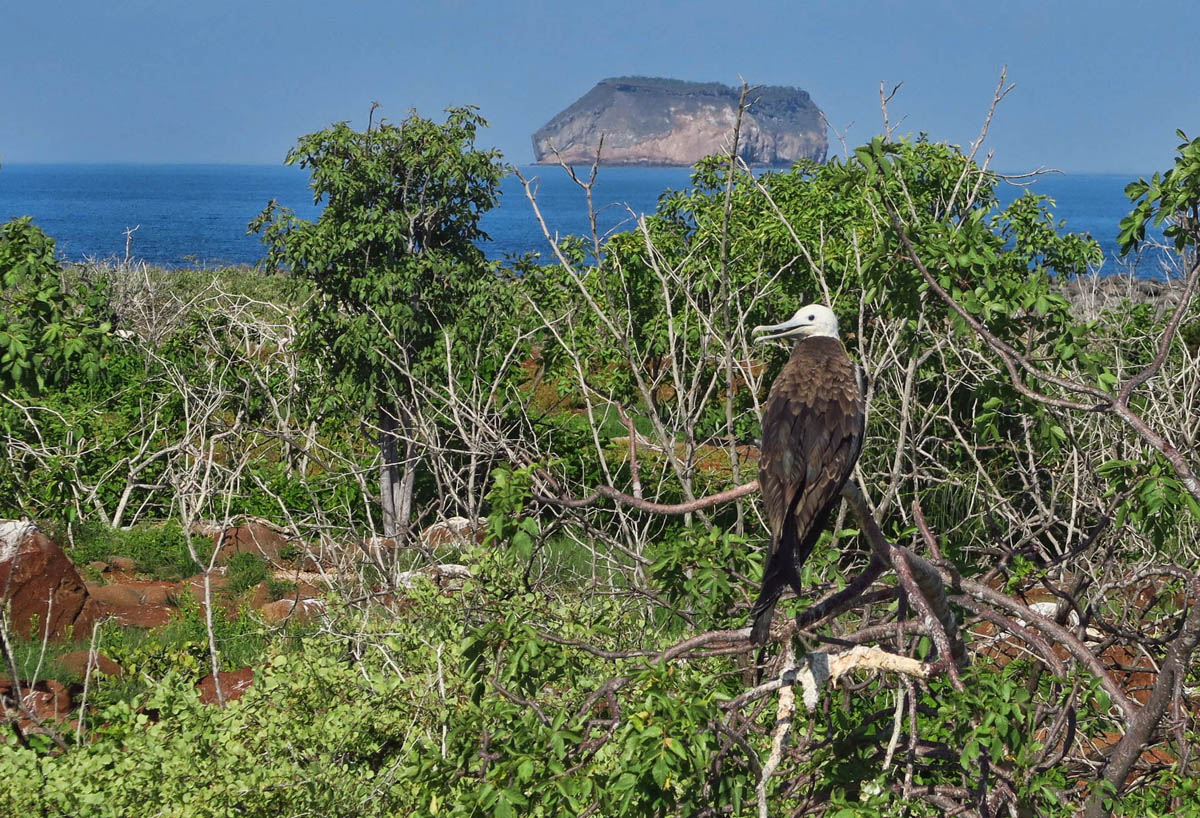 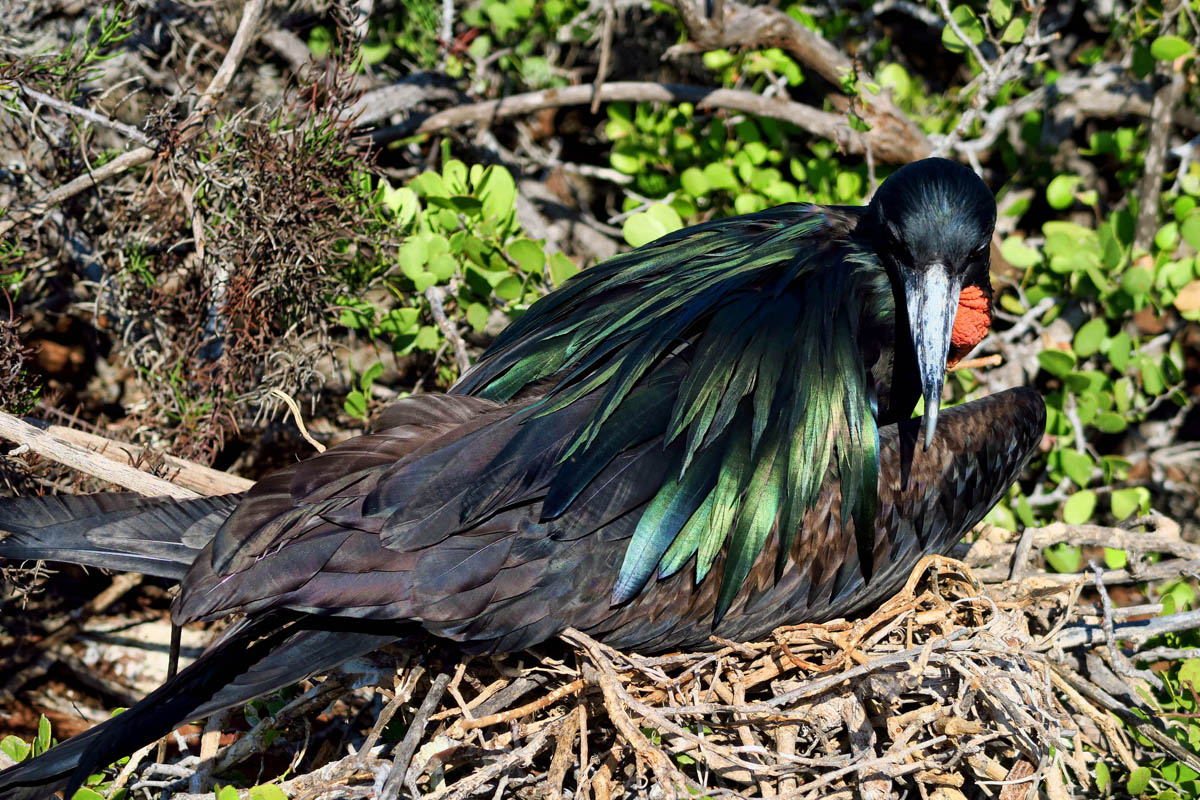 This is a Great frigate bird with a green sheen, while the magnificent has a purple iridescence in the sunlight. 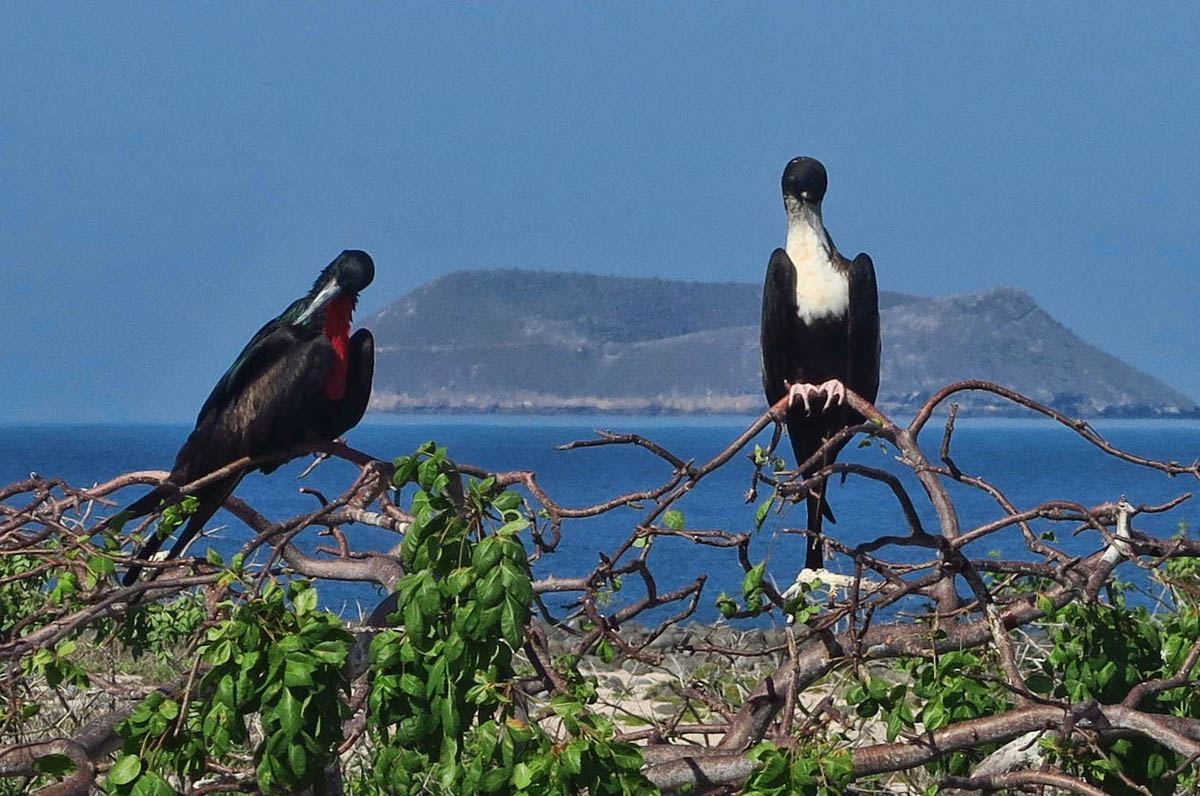 The frigate bird on the right with the white crest on the chest is an adult female.

I believe this is an older juvenile. 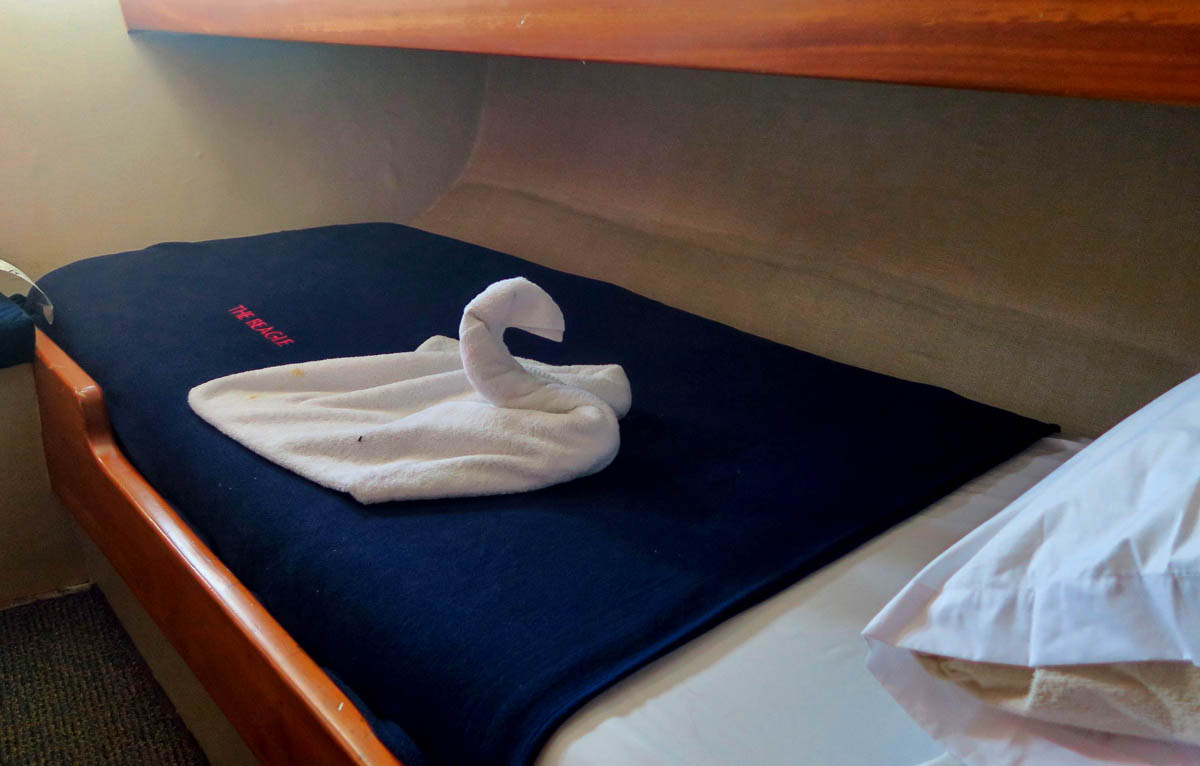 Back in my cabin, I am still seeing birds! I am not typically a fan of the “animal towels,” but being on a boat the size of the Beagle, I have come to know the person who folded these, making it now seem somewhat charming…

Once back in the zodiac, we go for a shoreline tour in search of fur seals. Not to be confused with sea lions, the fur seals are smaller, lighter in color, have larger, more bulbous eyes, and more pronounced ears than the sea lion. Having been hunted to the point of extinction for their fur coats, they are now on the endangered list. We did see one sunning on the rocky shore, but being on the somewhat crowded, bumpy rubber boat, my camera was stashed in the dry bag.

The snorkel following our hot hike is a welcome relief, and my favorite snorkel destination yet. The crew drops us off at one end of a rocky wall, and we drift with the current to the other end. The clear water is calm and refreshing (no wetsuit needed) and there is lots of marine life, including schools of yellow surgeon fish, parrot fish, and a few white-tipped sharks resting on the ocean floor. This is a popular scuba diving site, so we also encounter a group of divers along the way. I snorkel through their air bubbles racing for the surface.

Back on board in time for the best lunch yet, broccoli soup, fried shrimp, and passion fruit and blackberry sorbet. While I haven’t been that crazy about the dinner entrees, the crew hits it out of the park with the side dishes. Hardly a meal goes by that someone doesn’t remark, “wonder where they get all the fresh produce?” But the one thing I haven’t mentioned is the “snacks.” When we return from a hike or a snorkel, there is always a little treat waiting to refortify us after our activity. It’s either cold, frothy coconut milk, fresh limeade or fruit juice, accompanied by some kind of cookie or cracker (my favorite being the peanuts encrusted in sesame seeds.) While it’s not gourmet fare, the crew works tirelessly to make sure everyone is happy, and I hear no complaints…

Next stop on this busy day is Bartolomé Island, what is reported to be Galapago’s most photographed island, thanks to Hollywood. In 2003, the movie “Master and Commander” starring Russell Crowe was filmed here, featuring the islands most prominent sight, Pinnacle Rock. So we are here to get in on the selfie-action, along with the most boats we have seen yet since we left port.

But we are also here for another reason….back to nature, this is our best chance to see the Galapagos penguin. While the Galapagos penguin is the only penguin to live north of the equator in a tropical environment, it’s also the most northerly occurring species of penguin in the world. It keeps cool by living in caves along the shoreline and spending time underwater.

While the snorkeling is a bit of a dud out and around Pinnacle rock, green and murky, it does prove to be a means to an end, as we see one penguin sunning on the rock on the opposite side of the point. He looked so small! The Galapagos penguin is the second smallest of the species, and they can reach speeds up to 22 mph while swimming. While others would be lucky enough to see one swimming underwater, this would be my only penguin sighting in the Galapagos, so I am grateful for the encounter. 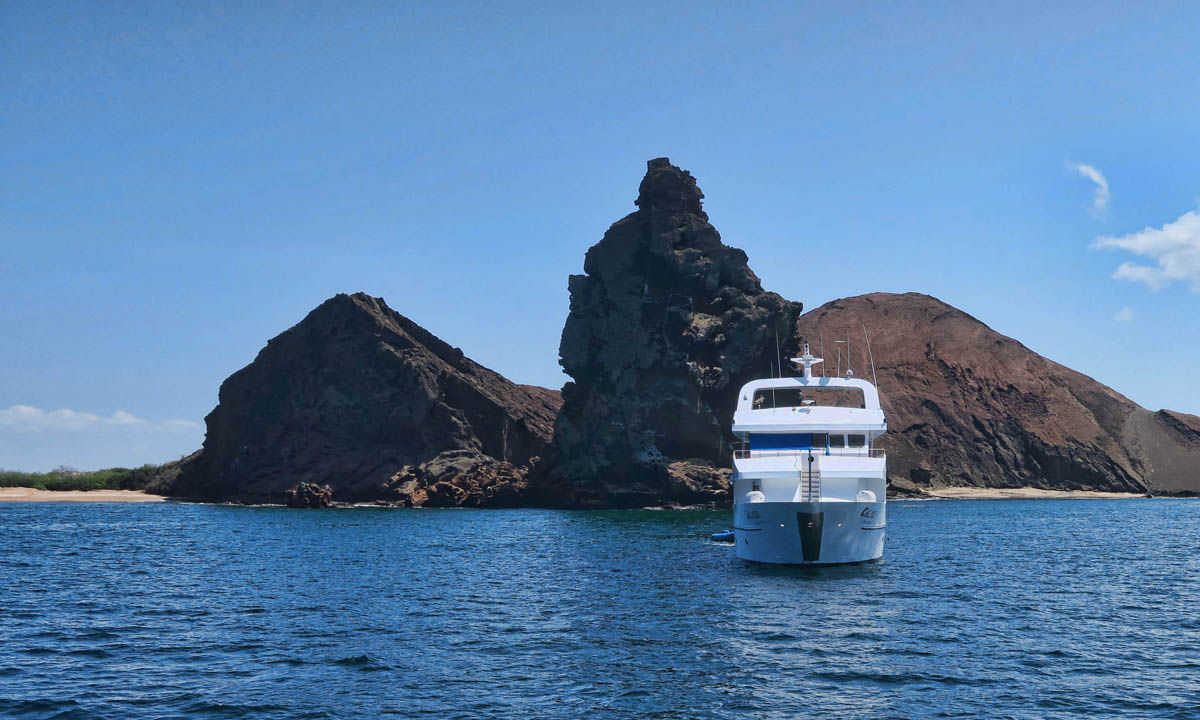 Pinnacle Rock, one of the archipelago’s most photographed features. 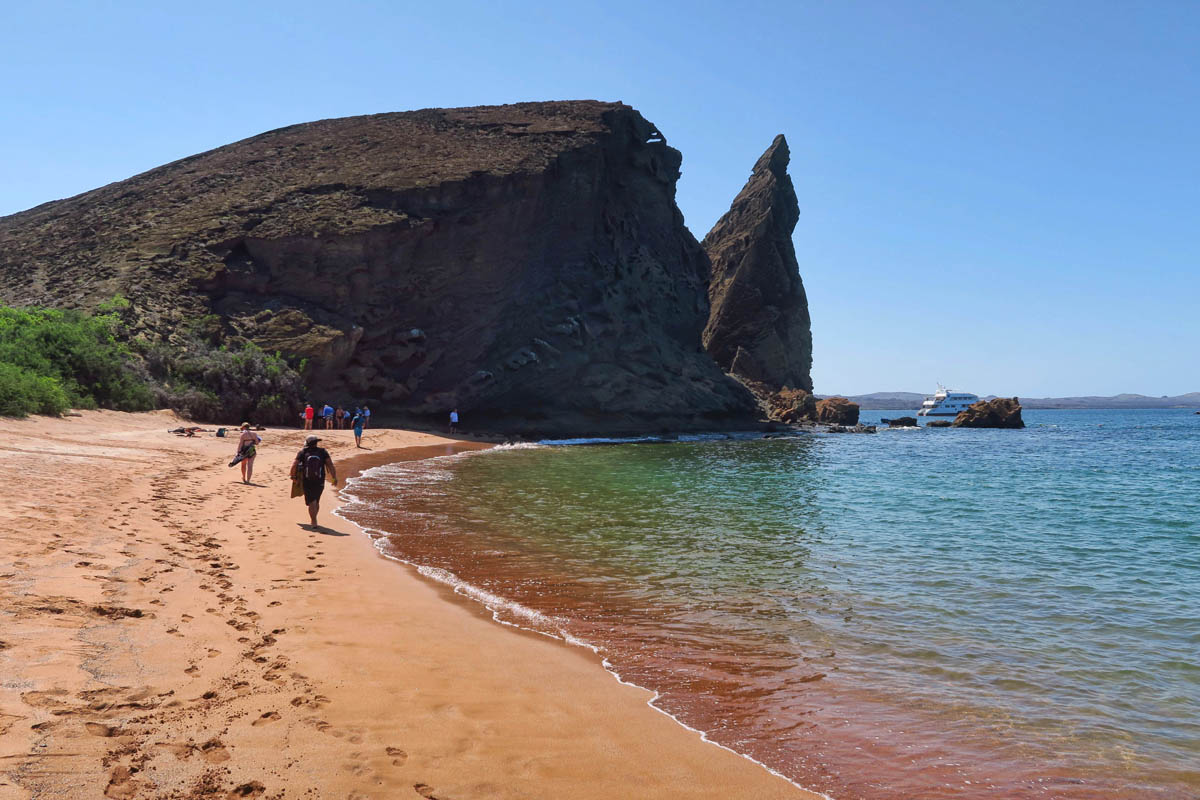 The shark tooth-shaped volcanic cone formed when magma was expelled from an underwater volcano.

The island of Bartolomé offers more volcanic geology than any of the other islands we have visited.

Our final of the four activities would be to hike the boardwalk path 300 feet up to the highest point on the island to get a view of the iconic Pinnacle Rock, with the opposing bays flanking the narrow isthmus. As one of the newer volcanic islands, this hike to the top of Bartolomé will afford some up-close views of the two different types of volcanic lava formations on the island. We stop along the way to view the two main types of lava which follow the Hawaiian name origins, “aa” (sharp and jagged,) and “pahoehoe” (smooth and ropy.) The higher vantage point also provides an outstanding overview of several spatter and tuff cones and lava flows. 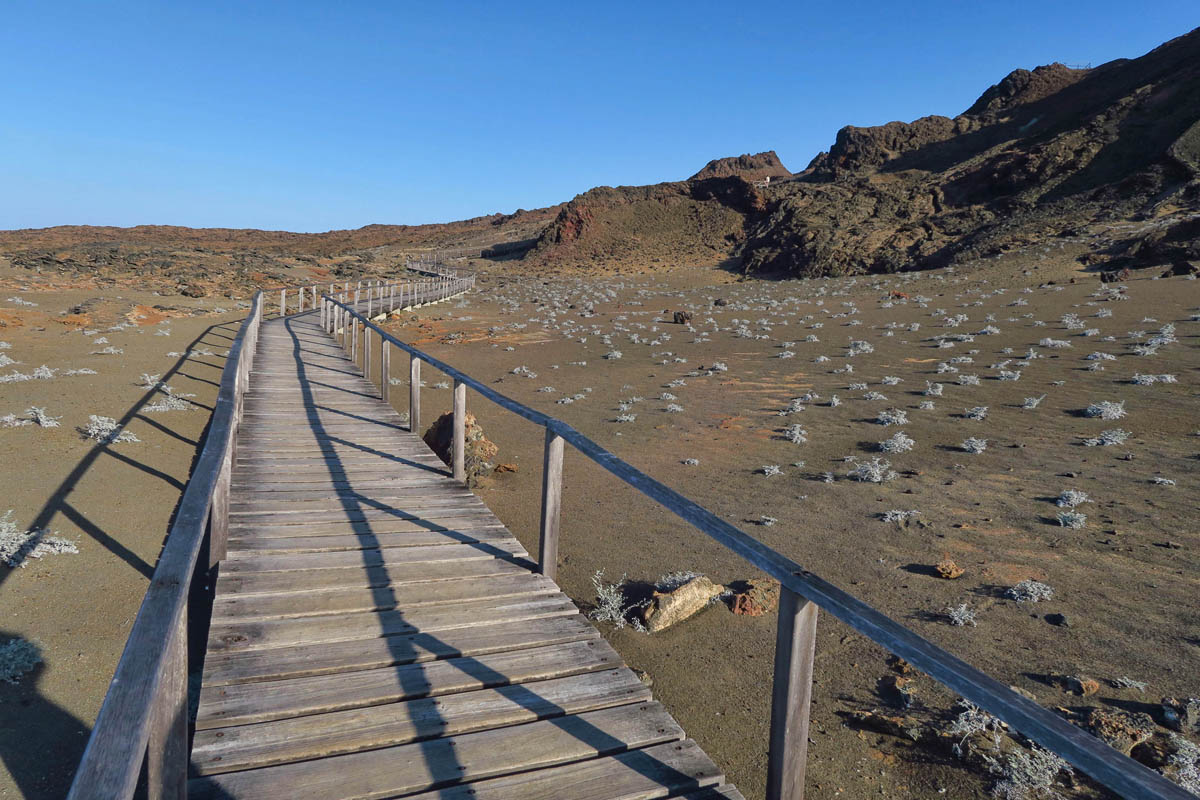 There is a boardwalk trail to the top of the largest volcanic cone to prevent trampling of fragile plants and formations. 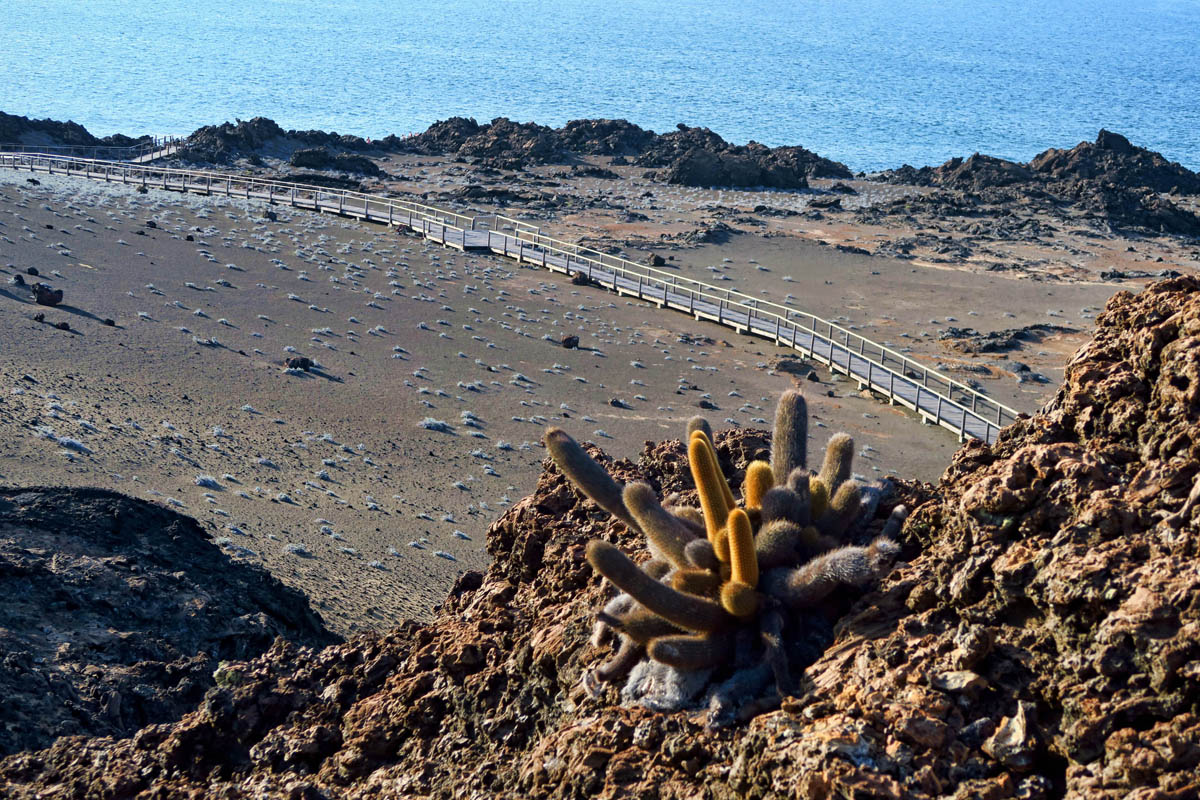 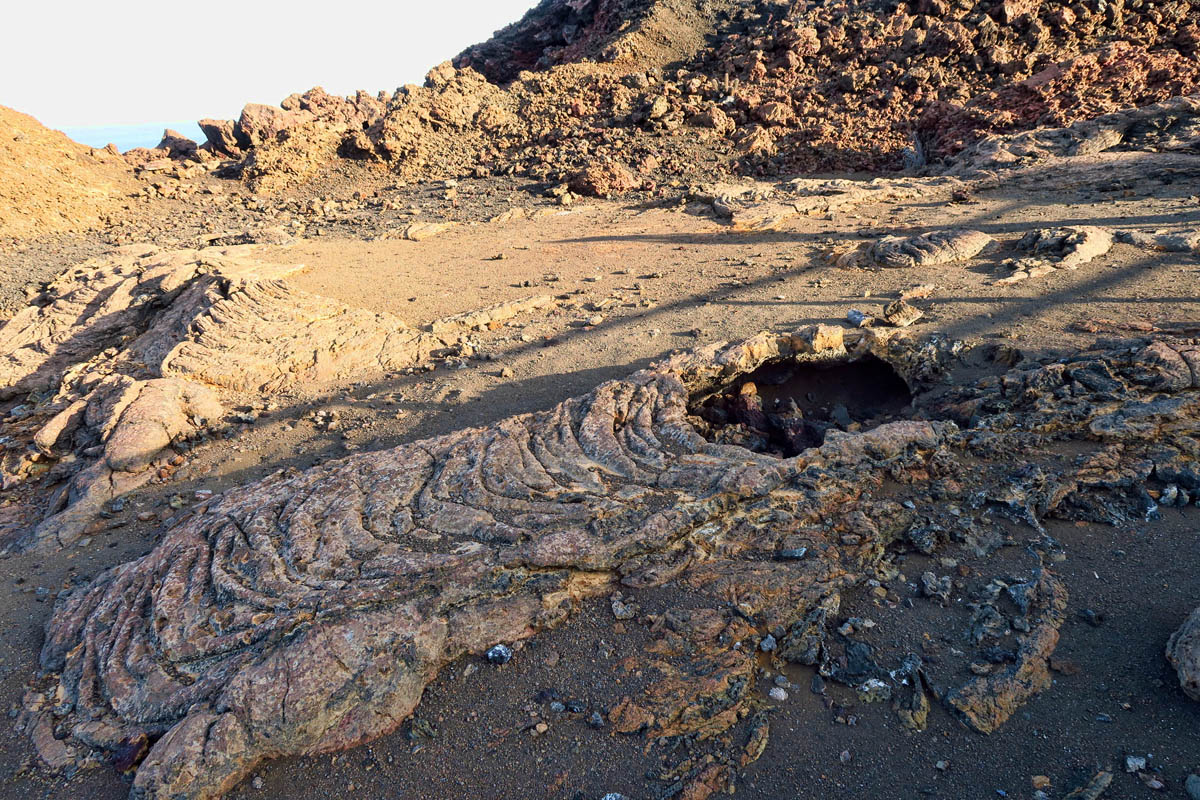 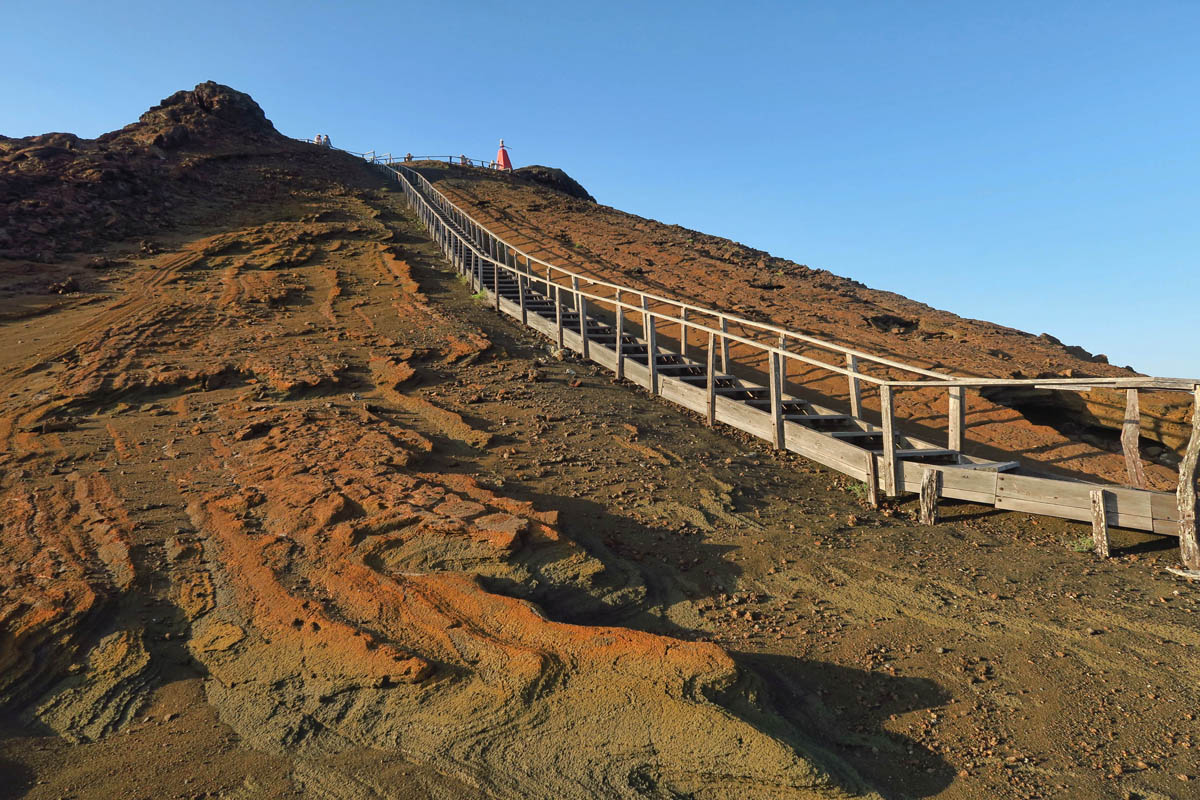 Although lighting is not ideal looking towards Pinnacle Rock, it’s golden glow is beautiful on the lava. 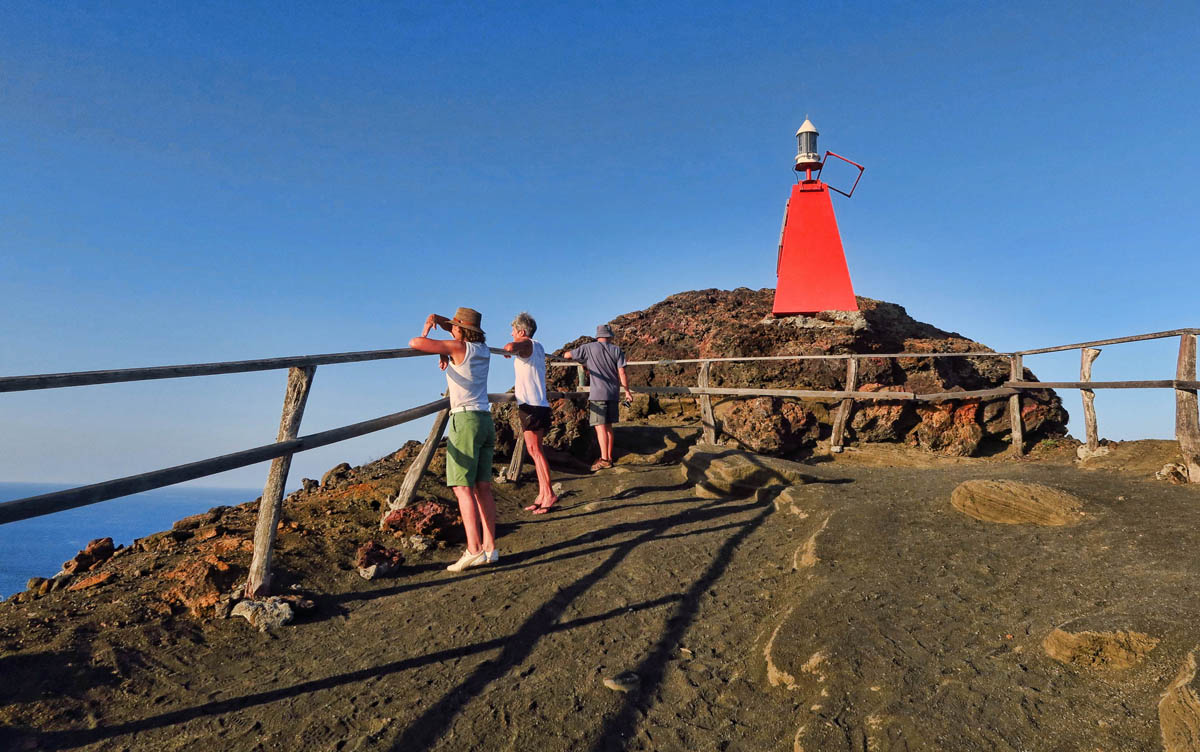 Both a blessing and a curse, we are here at a lovely time of the evening, just as the sun is sinking low to the horizon, casting a golden glow over the seascape. But we are also facing into the western sun, which is obscuring the typically vivid blues and greens of this iconic view. Still, the view is stunning, and very ethereal with the soft evening breezes lowering the temperature as the sun drops. 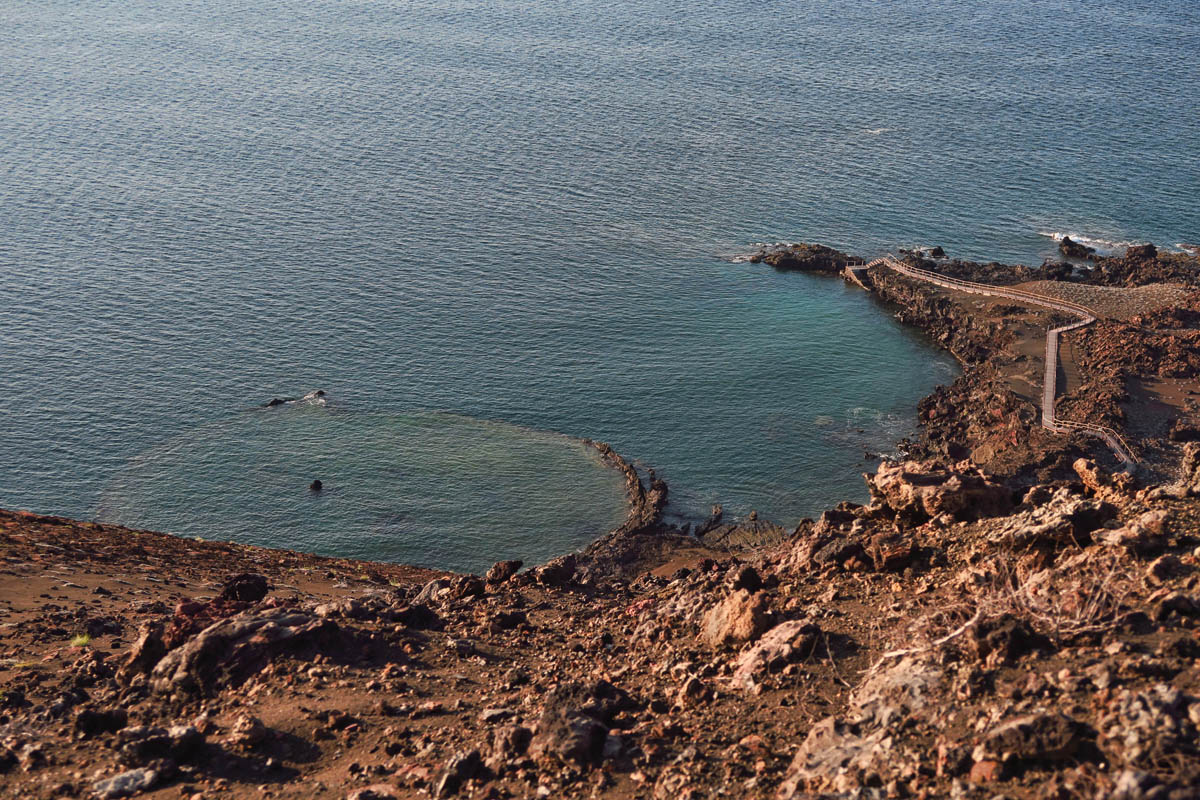 Beautiful views out over the water. 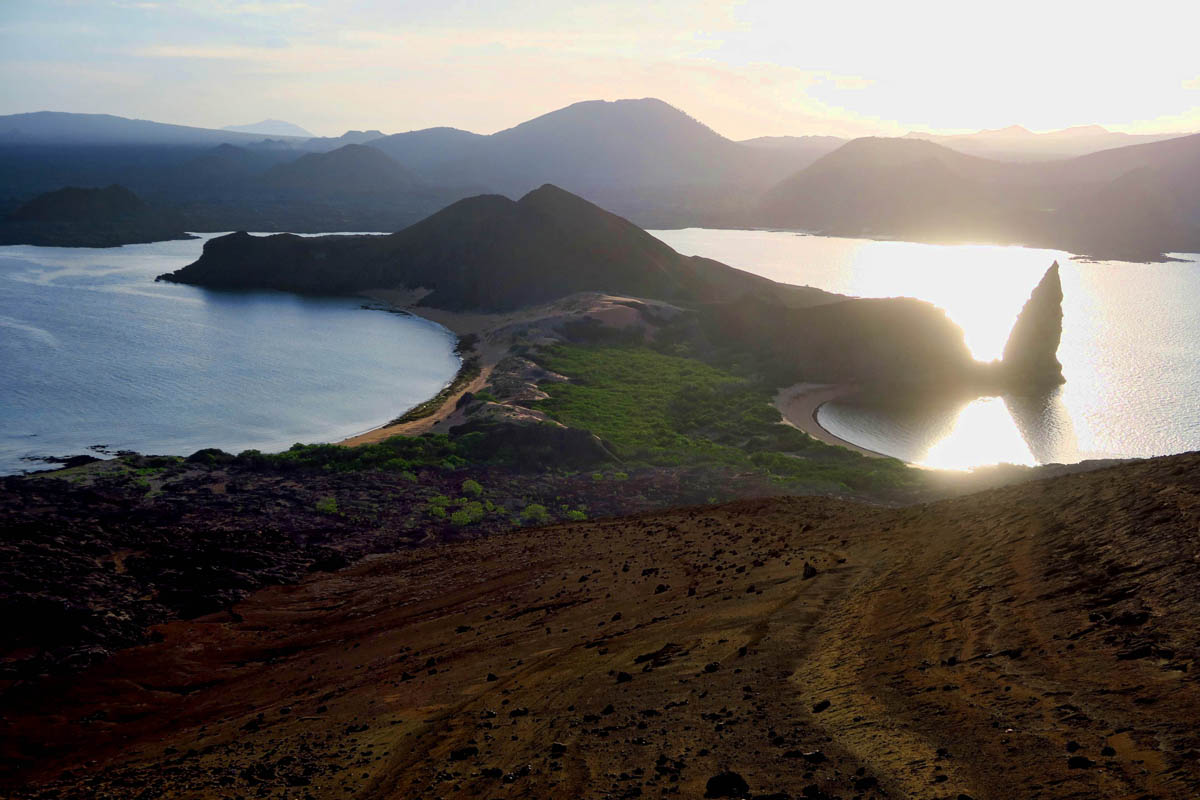 This is the iconic view out over the isthmus and Pinnacle Rock. Unfortunately, setting sun distorts the colors. 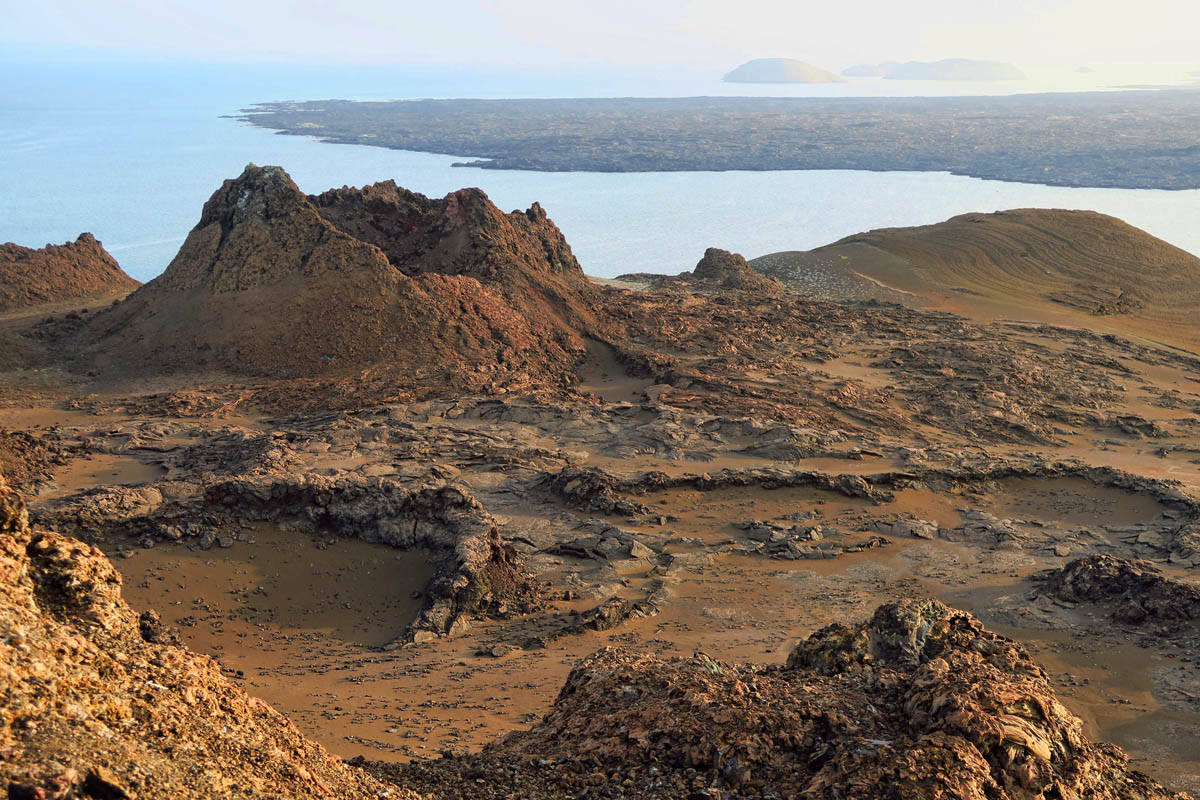 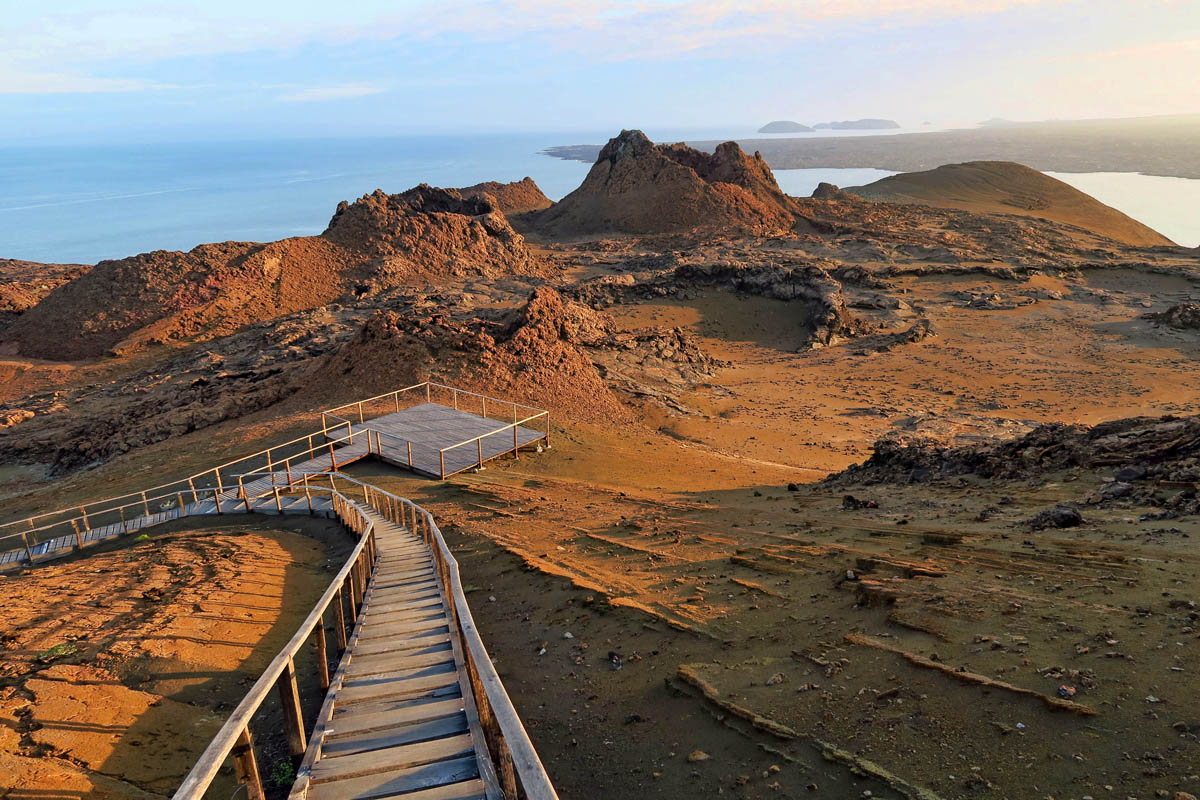 Cooler evening breezes are welcome on the climb up. 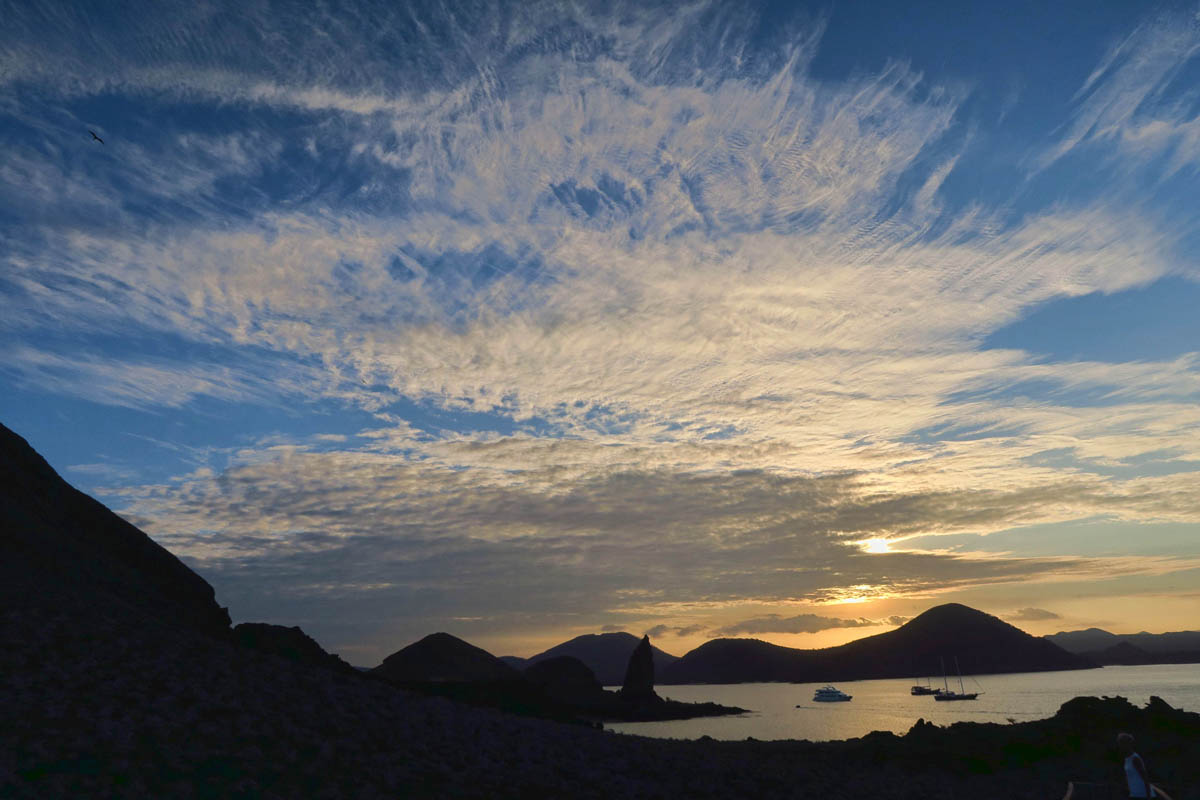 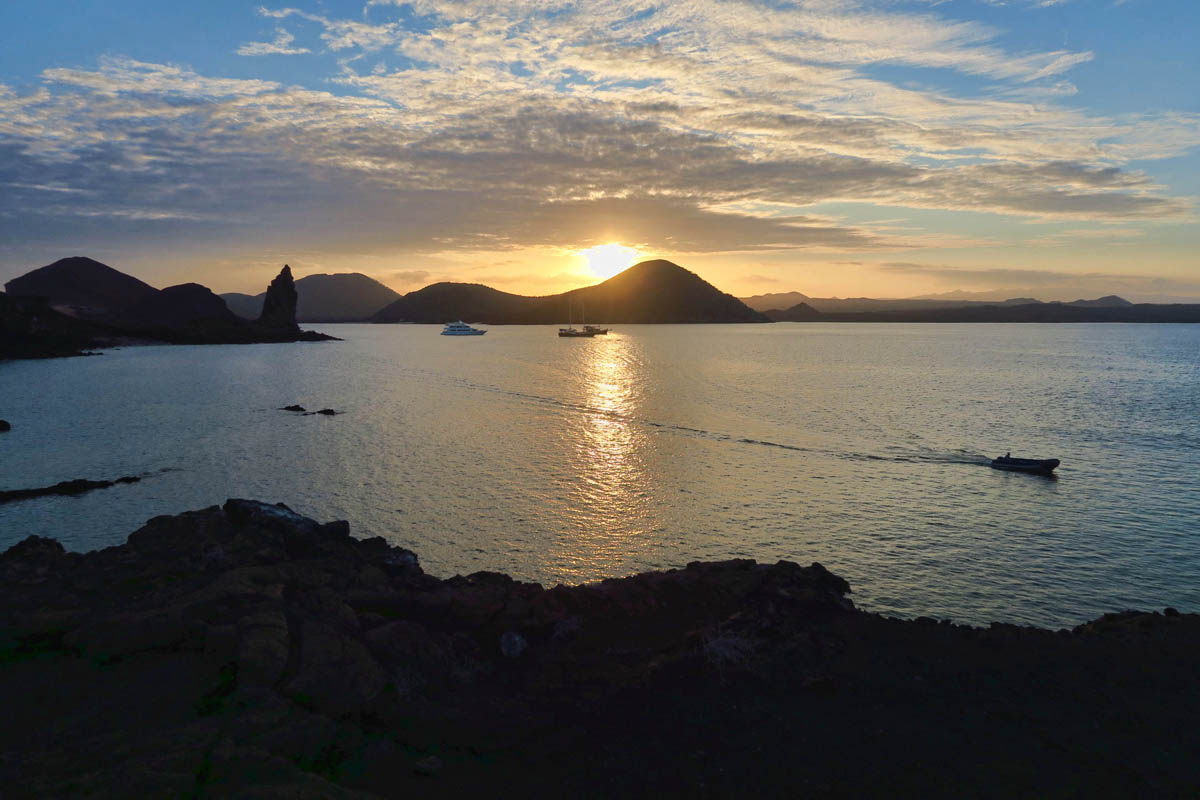 Here comes our dinghy driver to pick us up… 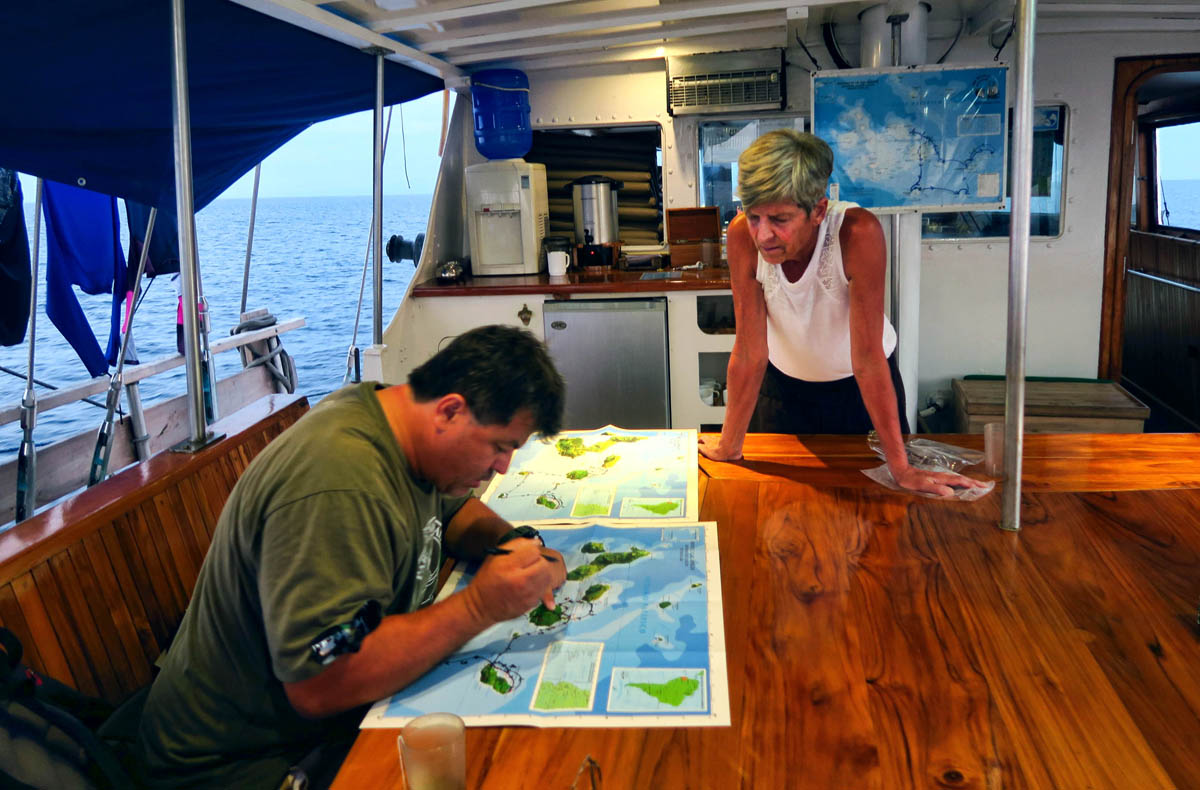 Kathy and I bought souvenir charts of the islands when we were back in San Cristobal. Fabian is filling in our charted course.

Back on board, dinner is rice and beans (groan!) with curried beef, but the chef makes up for the beans by serving a lovely flan for dessert.

“Man tends to increase at a greater rate than his means of subsistence.” ~ Charles Darwin