When back in Quito trying to secure my last minute Galapagos cruise, I was under a lot of pressure to make my decisions quickly. It felt like a high stakes game, committing to the cost of the cruise without airfare, then trying to nab seats before the airfare went up or sold out. I had only a few minutes to decide what my return destination would be, and when.  I opted to stay in the Galapagos five extra days, thinking the cruise would only leave me wanting more.

That might have been true had I reversed the order and done the land portion first, followed by the cruise. But on the heels of the heavenly cruise, Puerto Ayora felt like hell, or at least as hot. Without the benefit of the sea breeze, even my eyelids were sweating. Food was terribly expensive, like $4.50 for a limeade. And not one restaurant or internet cafe had so much as a ceiling fan, let alone air conditioning. Tours were all to the same locations we had just come from, and at a cost on average of $100 per person. Stories of crowded ferries in between islands, limited and expensive accommodations, and a forecast full of afternoon thunderstorms caused me to lose my appetite, literally and figuratively.

I decided to cut my losses and change my airline ticket. Not being particularly keen to return to Quito, I had chosen Guayaquil as my return destination five days from now.  I marched into the airline office in Puerto Ayora braced to bite the bullet, only to be assessed a change fee of a mere $28. And with that, my Galapagos adventure was behind me. 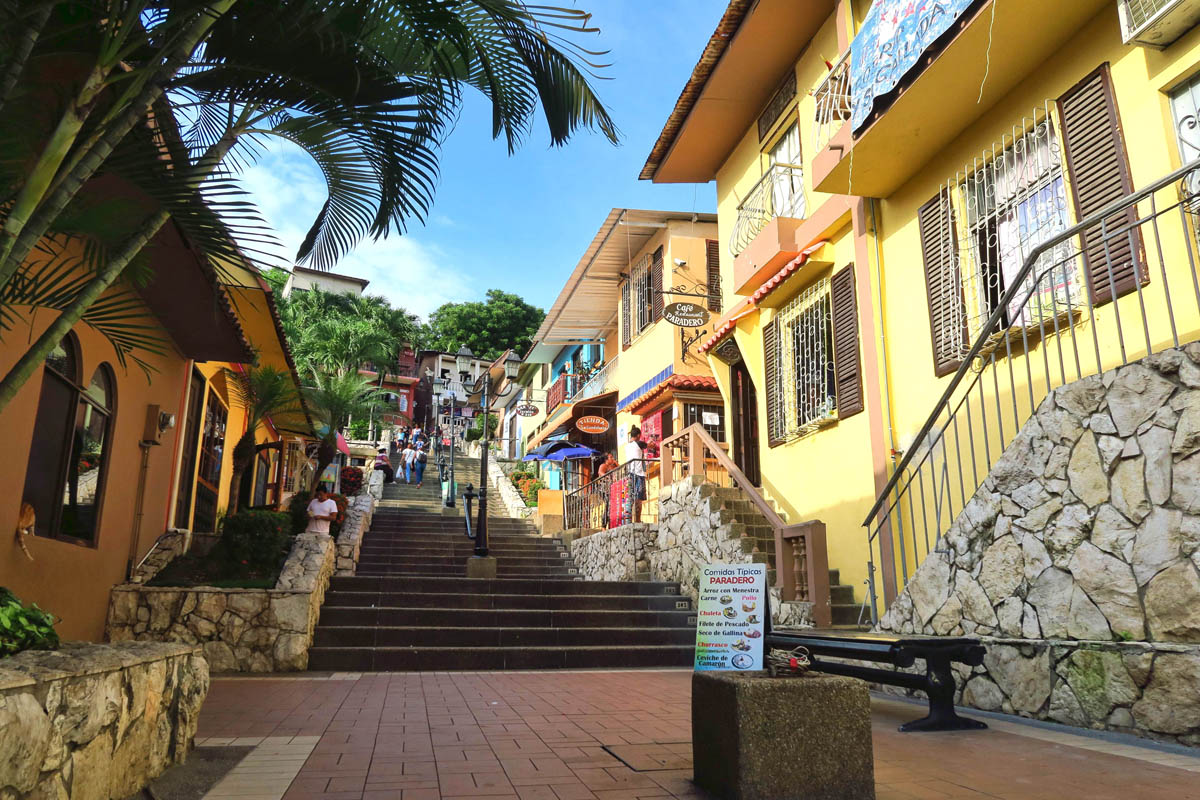 Climbing up through Cerro Santa Ana at the northern end of the malecon. 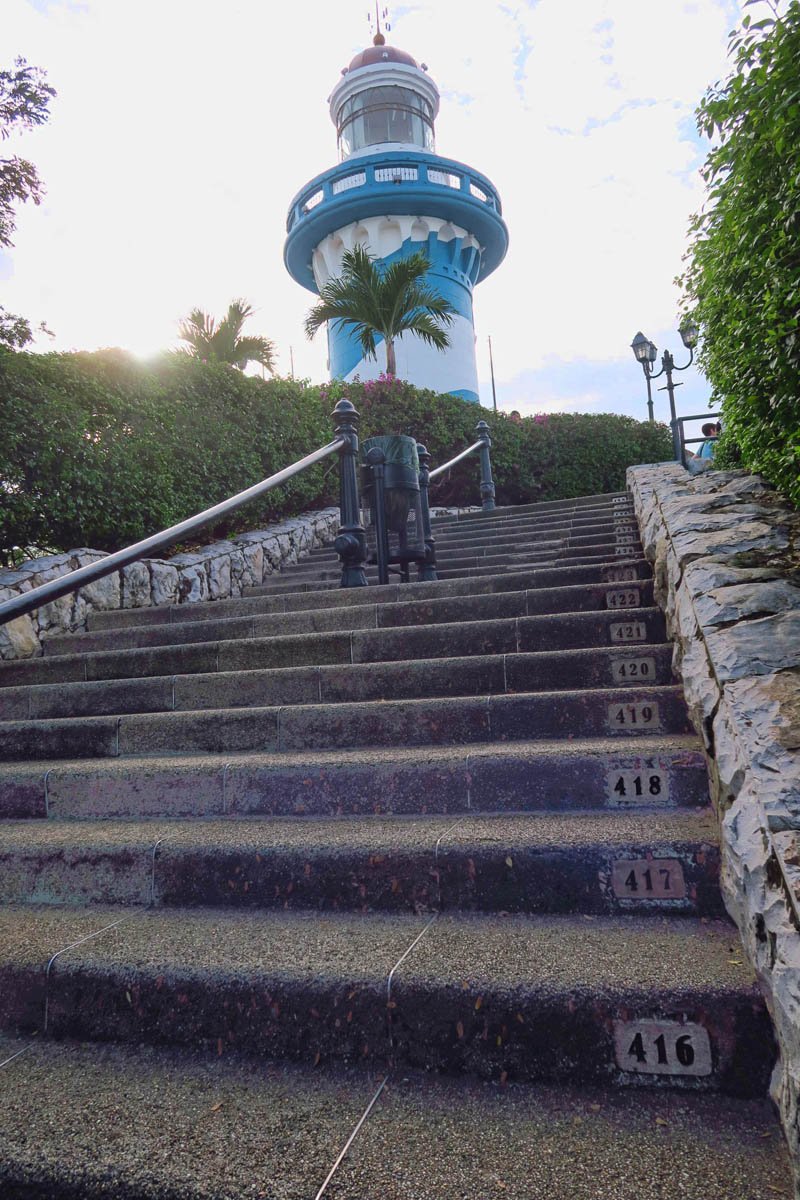 There are 444 winding steps up through the Las Peñas neighborhood to reach El Faro, the lighthouse. Steps are numbered in lower right corner all the way to the top, so one can measure their progress. 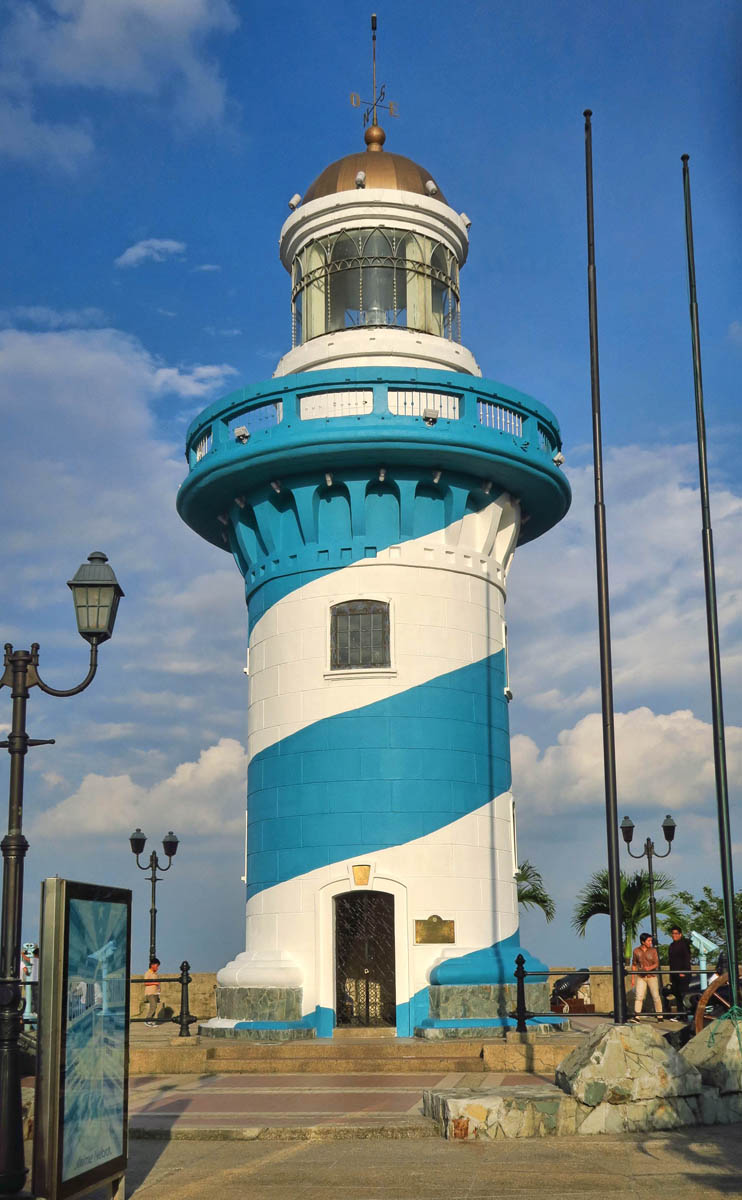 While the lighthouse appears quite tall from down below, it is really pretty short once you reach the top of the 444 steps up the hill. It was constructed in 2001, so relatively new. 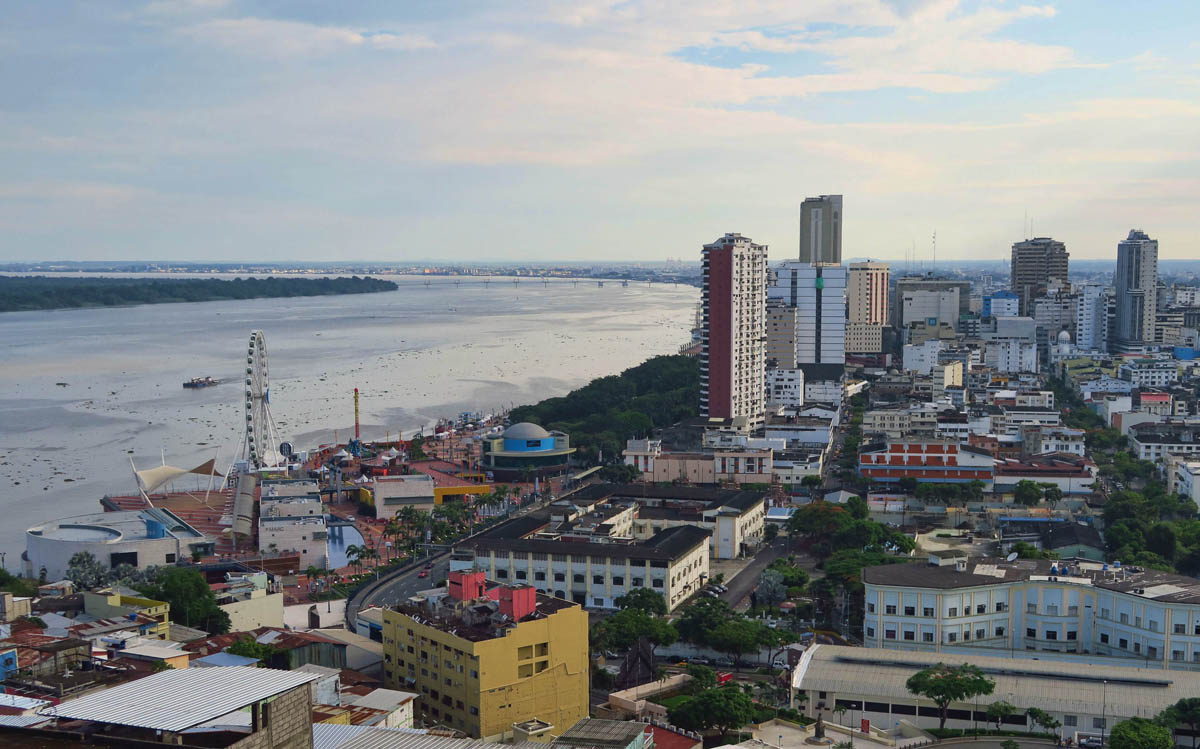 It’s a spectacular view from the top of the hill. Here you can see the malecon which stretches along the Guayas River. It is lined with shops, restaurants, and amusement parks (note Ferris wheel on the left.) 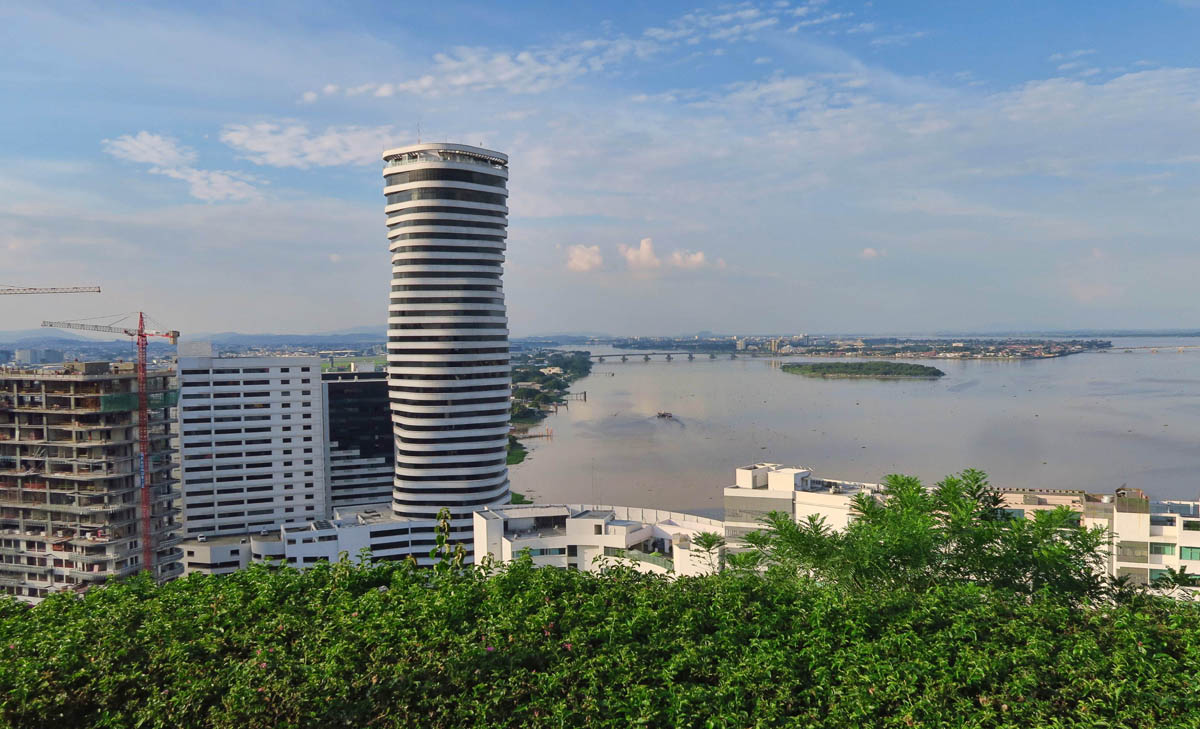 The Guayas River flows from the Andes and the Chimborazo, Ecuador’s highest volcano. 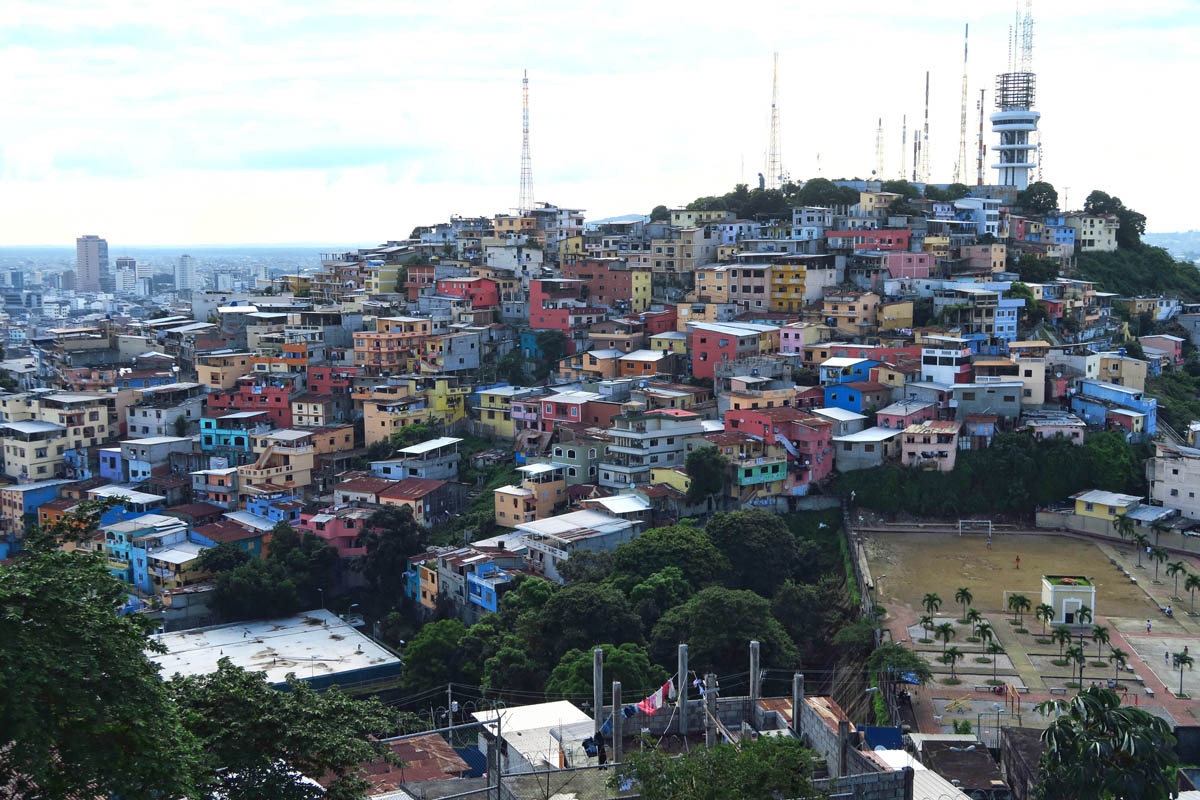 The Cerros Santa Ana is one of Guayaquil’s oldest neighborhoods. 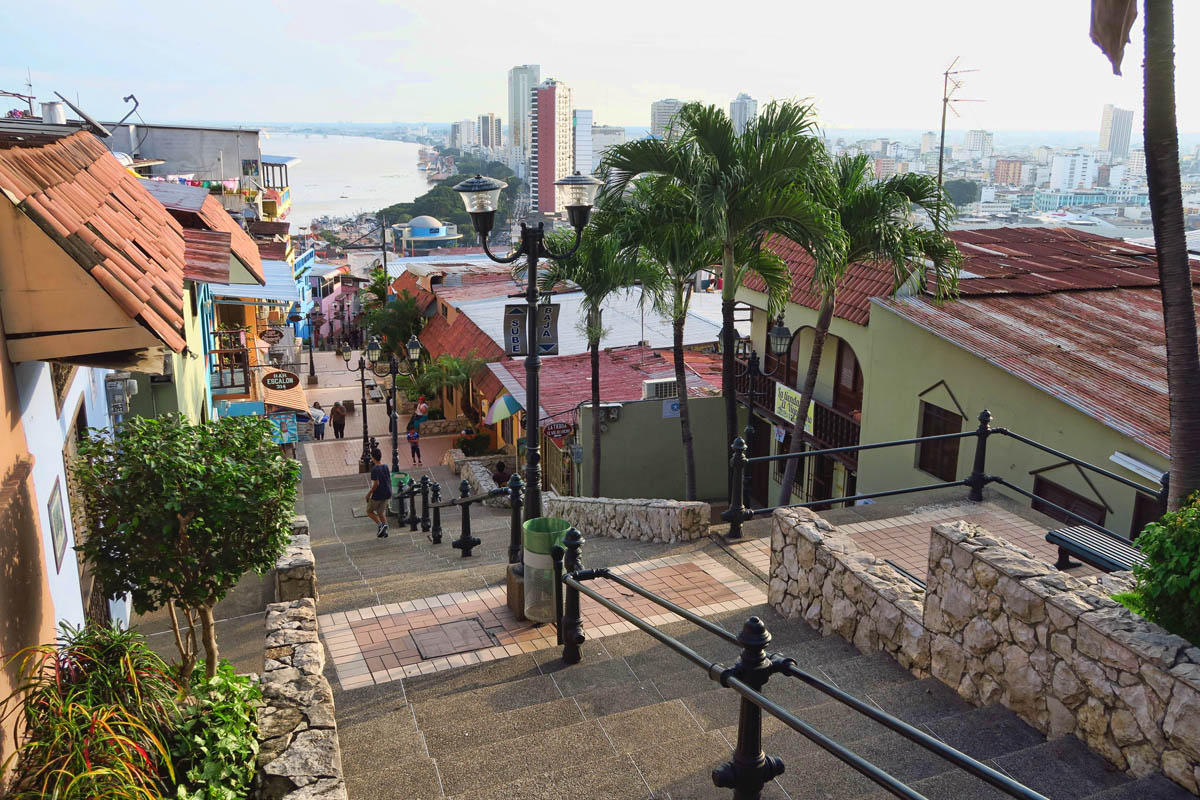 While a bit touristy, it’s a lively neighborhood with restaurants and bars along the stairs to the top. 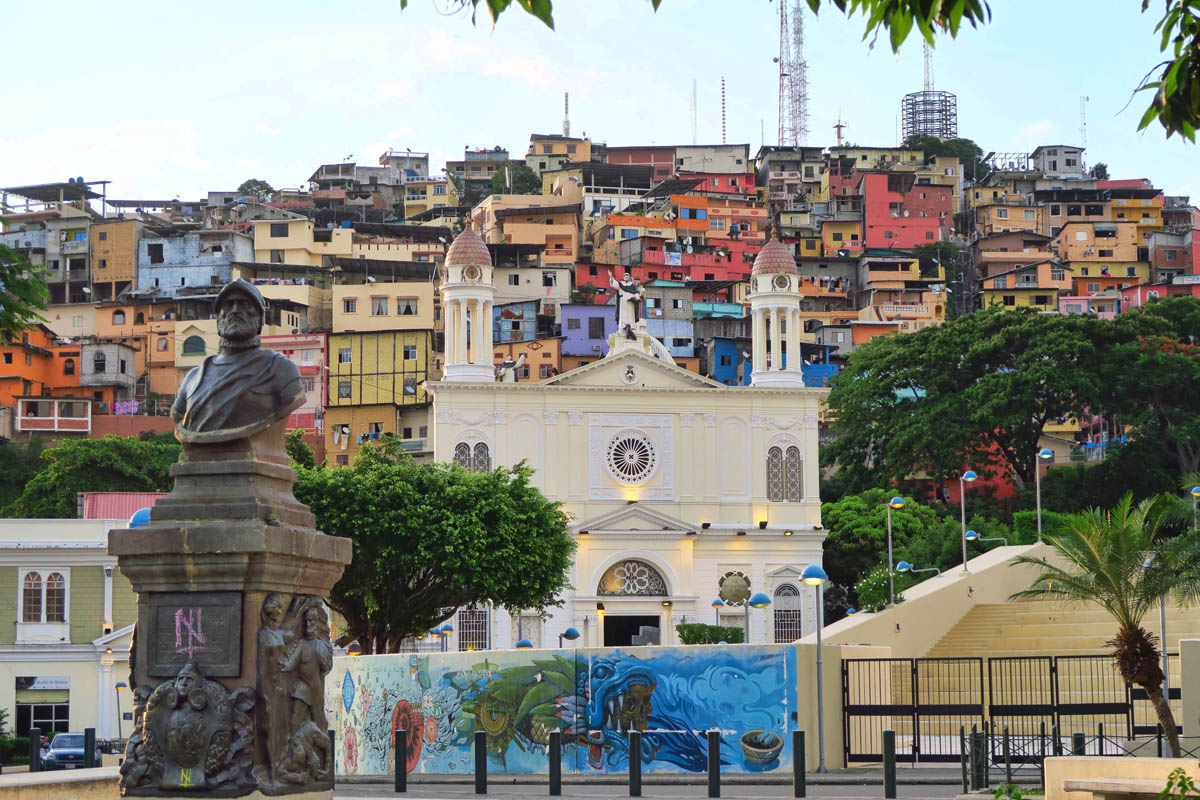 Cerros de Santa Ana and Cerros del Carmen have been inhabited since the 1500’s.

Guayaquil is Ecuador’s second largest city, and the nation’s main port. The oppressive humidity of the city gives the impression of being a coastal town, but in fact, the waters edge is actually the Guayas River, 40 miles north of the Gulf.

First order of business after landing in Guayaquil and finding a hotel was to find a location for my second camera repair of the trip, which would dictate whether I would continue on, or return to the US. Eighty bucks to extract a grain of sand from the lens shield (camera had to be disassembled for the second time in a month,) and I was back in business once again. 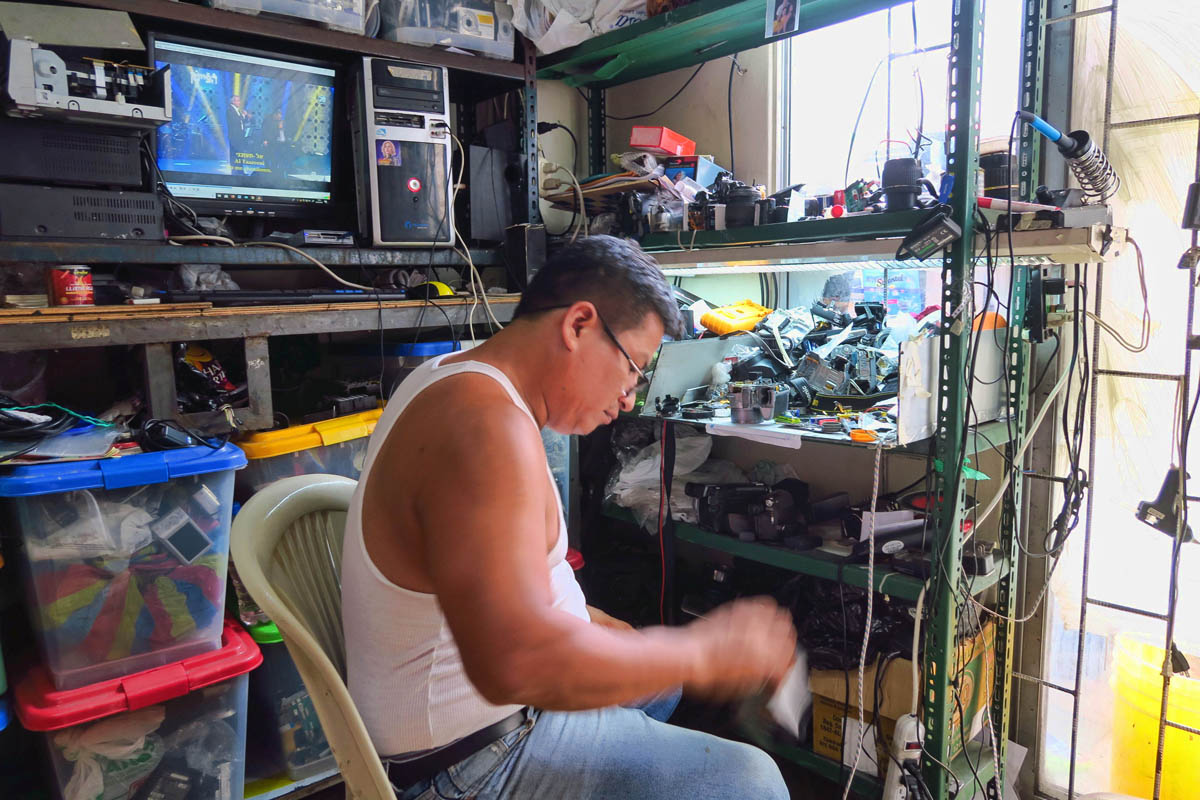 What the top camera repair in Guayaquil looks like…whatever works!

But the horrid heat and humidity was wearing me down, contributing to a bad case of Traveler Burnout. I recognized the symptoms. The overcoming urge to stay holed up in the hotel room, lying in direct path of the AC, while binge watching the CNN daily line-up. It was just too hot to be out mid-day, so I was forced to restrict my sightseeing to early mornings and late evenings. I strolled along the riverside malecon at a slow slog to avoid excreting more water through my pores than I could ingest. It was time to get back to higher elevation. 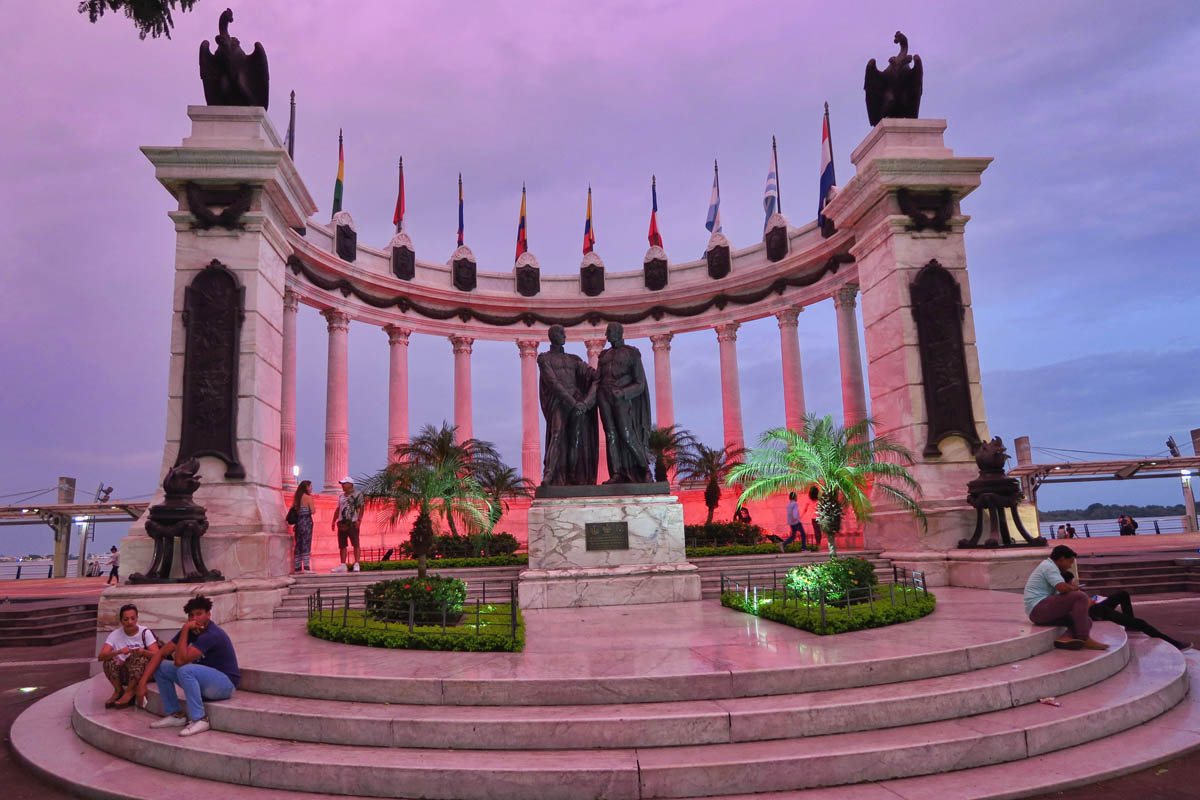 The Rotunda memorial, built in 1930’s 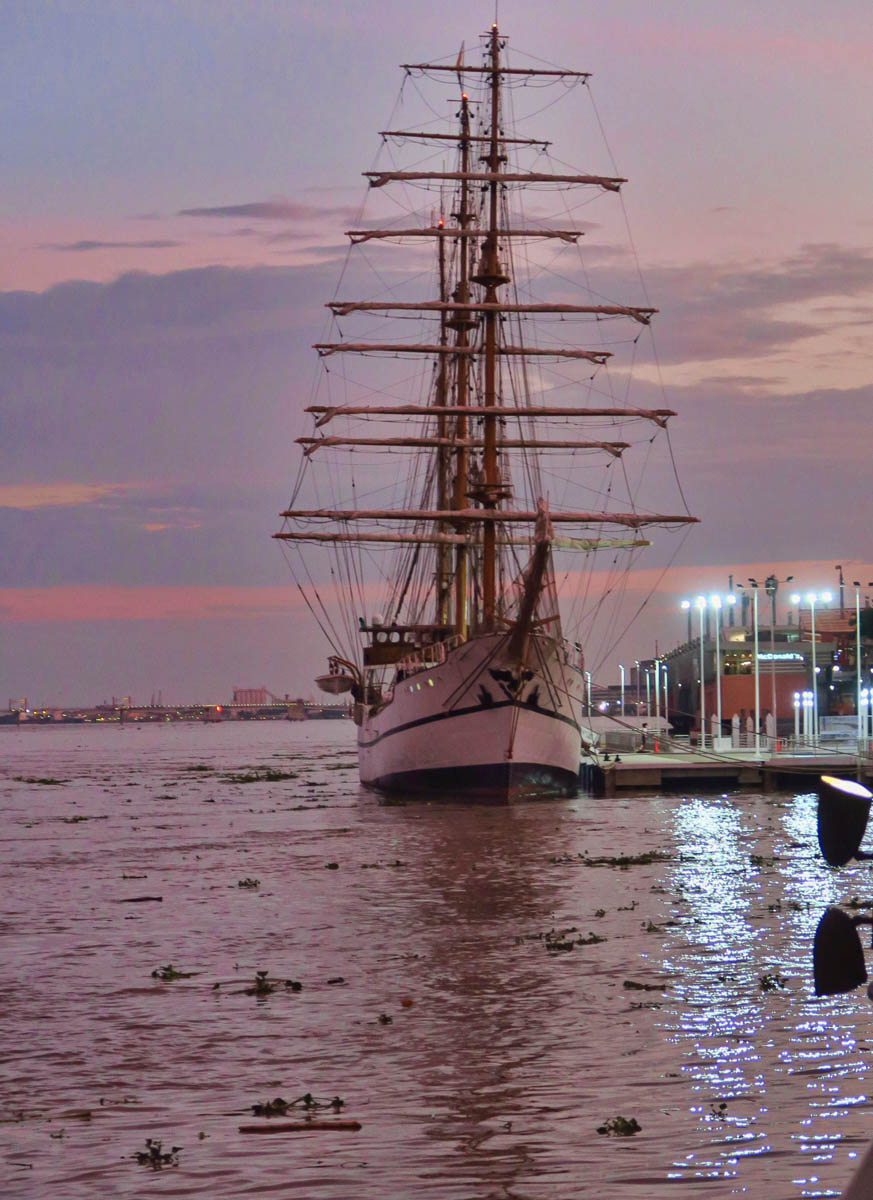 Tall ship along the malecon. 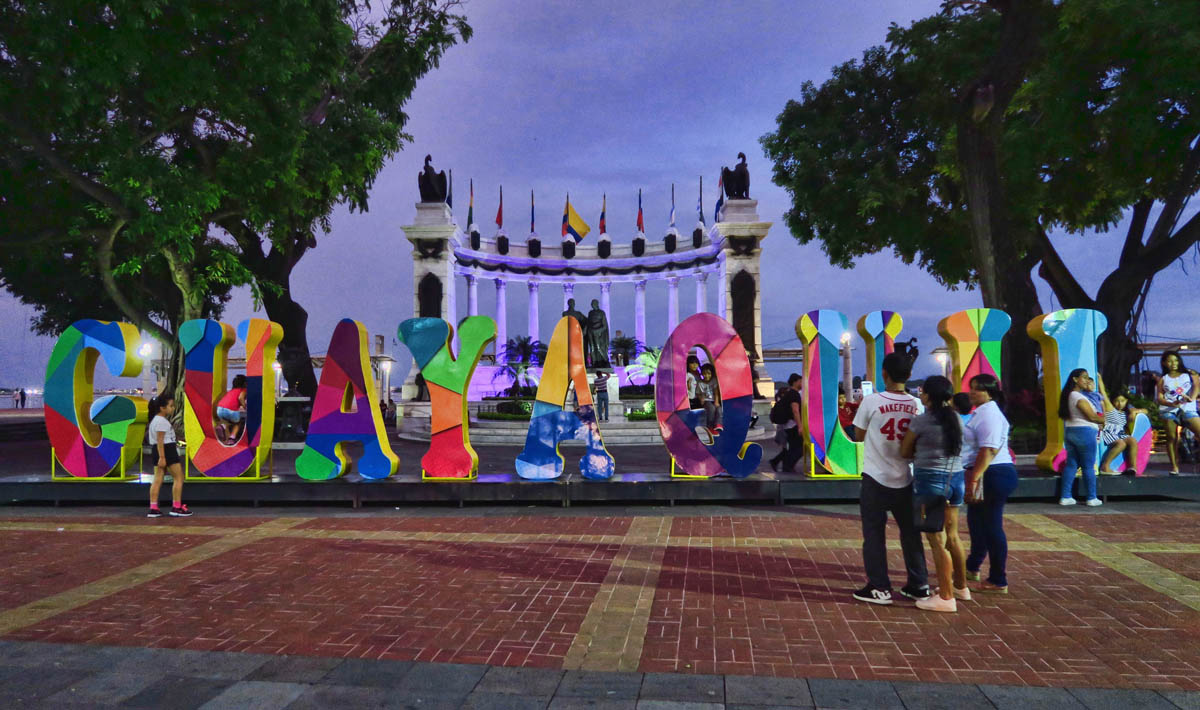 On my last night in Guayaquil, I was sleeping soundly, until 5:15am when my bed began to shake. The four legs of the bed commenced clattering, each to its own beat. I’d been through this once before in Costa Rica, so I knew the feeling. Earthquake! But in Costa Rica, I was on the ground floor, not a third floor hotel room with brick interior walls.

Ecuador is located along the “Ring of Fire,” an area prone to earthquakes. The Guayas province, Ecuador’s most populous region is particularly at risk because of its location near the Gulf of Guayaquil south of the North-Andean subduction zone. The brackish water where the river meets the gulf makes for weak and compressible soil sediments over hard rocks, resulting in heightened susceptibility to earthquake damage.

I jumped out of bed and flew out the door, down two flights of stairs, leaving behind even my eye glasses. Standing in the hotel lobby wearing only my PJs, the best I could understand from the Spanish-speaking hotel manager was “No problema, it happens all the time.“ So back to bed I went.

But 15 minutes later it happened again, this time stronger and longer, sounding like giant box of bricks rattling. Back down the stairs I flew again, only this time it was different. The man behind the desk seemed concerned as he was rattling away on his cell phone. There was another French-speaking tourist in the lobby wearing only his pants, his belt still unbuckled. And this time, I could see through the window, people had begun to congregate in the streets. This time, I had taken my cell phone along, and was able to google the news to learn it was a 7.5 quake in Cuenca, about 200 miles away.  After that, I went back to bed fully dressed, with a “bail out bag” stashed near my third floor door.

Time to get out of Guayaquil….

14 thoughts on “Getting Out of Guayaquil”