I did a few day trips around the south coast while staying in Lagos. It’s a good base with an active bus network from which local bus lines spider out in all directions. I have yet to encounter a bus station attendant that doesn’t speak English in all of Portugal, making it easy and affordable to explore the southern coast, as well as the rest of the country.

One caveat to convenient bus travel in Portugal is weekends. Bus schedules are just about cut in half on Saturday and Sundays, even to tourist destinations. Since I am “vacationing” at a beachside destination, it takes some adaptation for me to learn this, as I typically associate weekends to be the busiest time for tourists and vacationers. But when taking the bus in Portugal, it has taken me several weekends of limited schedules to finally realize I need to do my traveling mid-week. 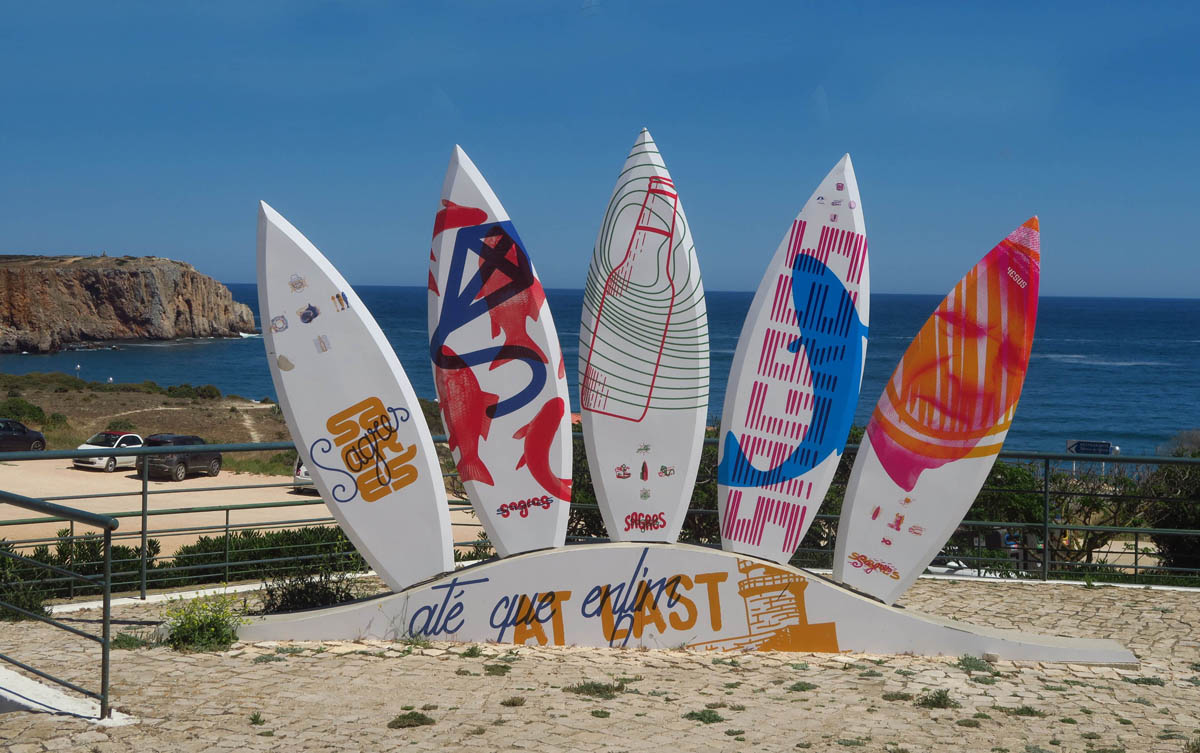 Surf’s up in Sagres 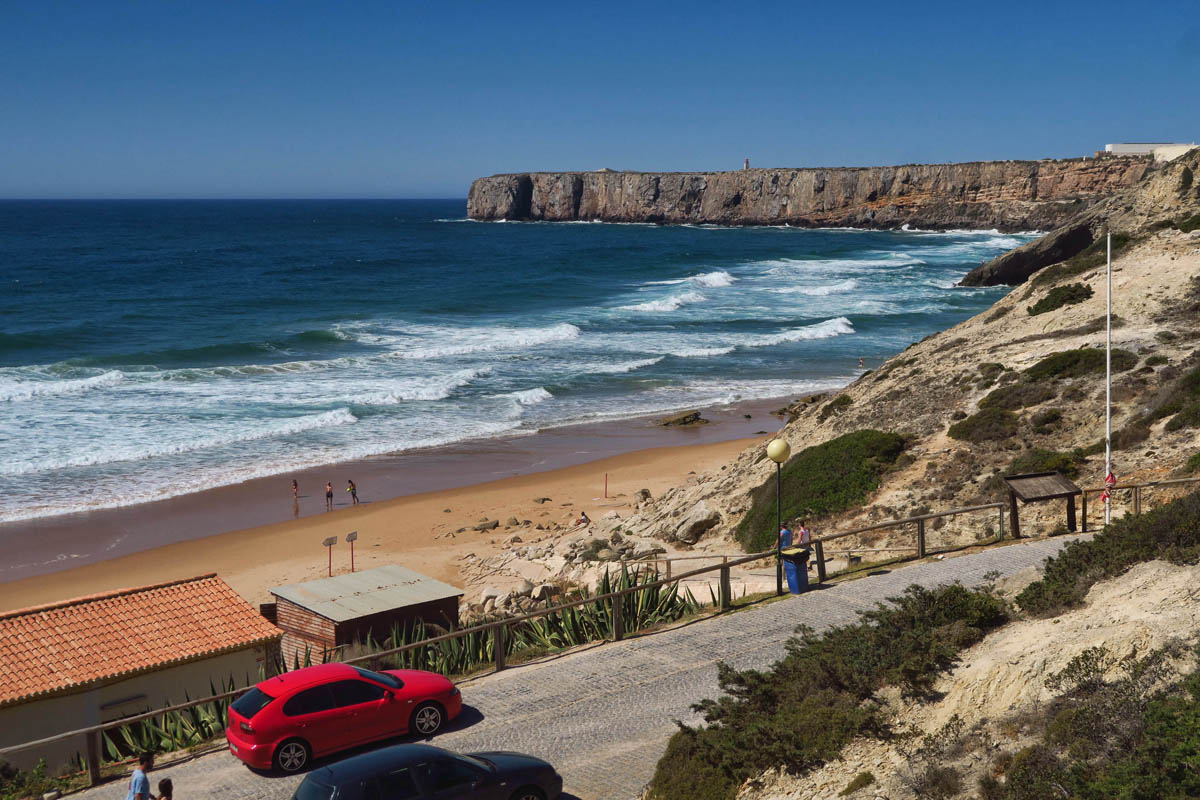 The many promontories along the coast make it possible to surf when the wind is from either direction. 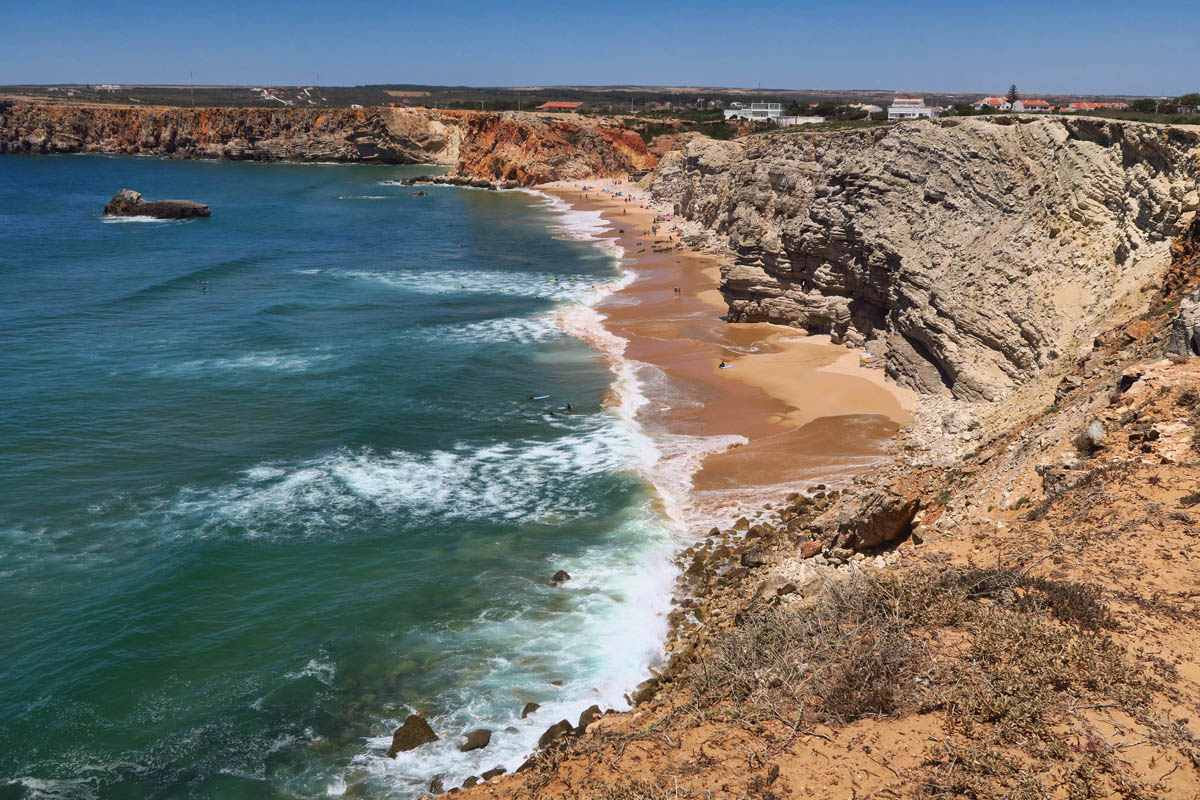 Surfers below mid-photo look like tiny specs in the water. 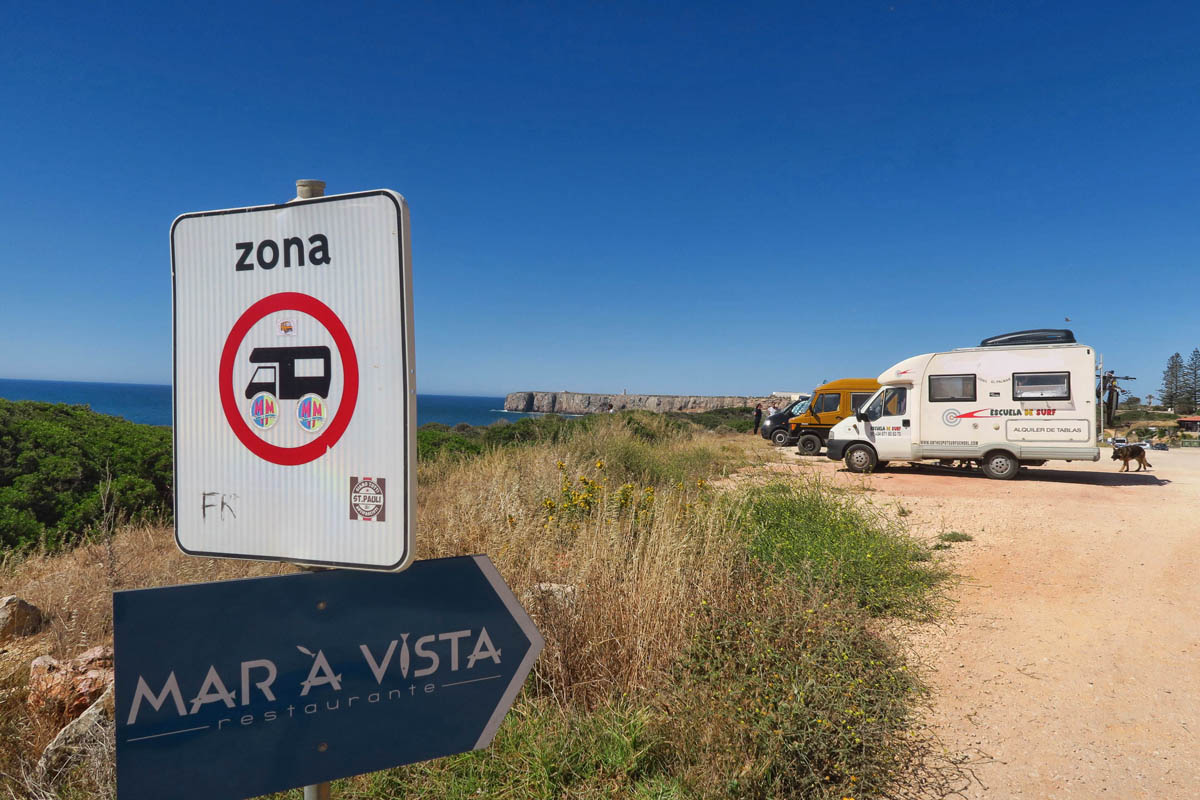 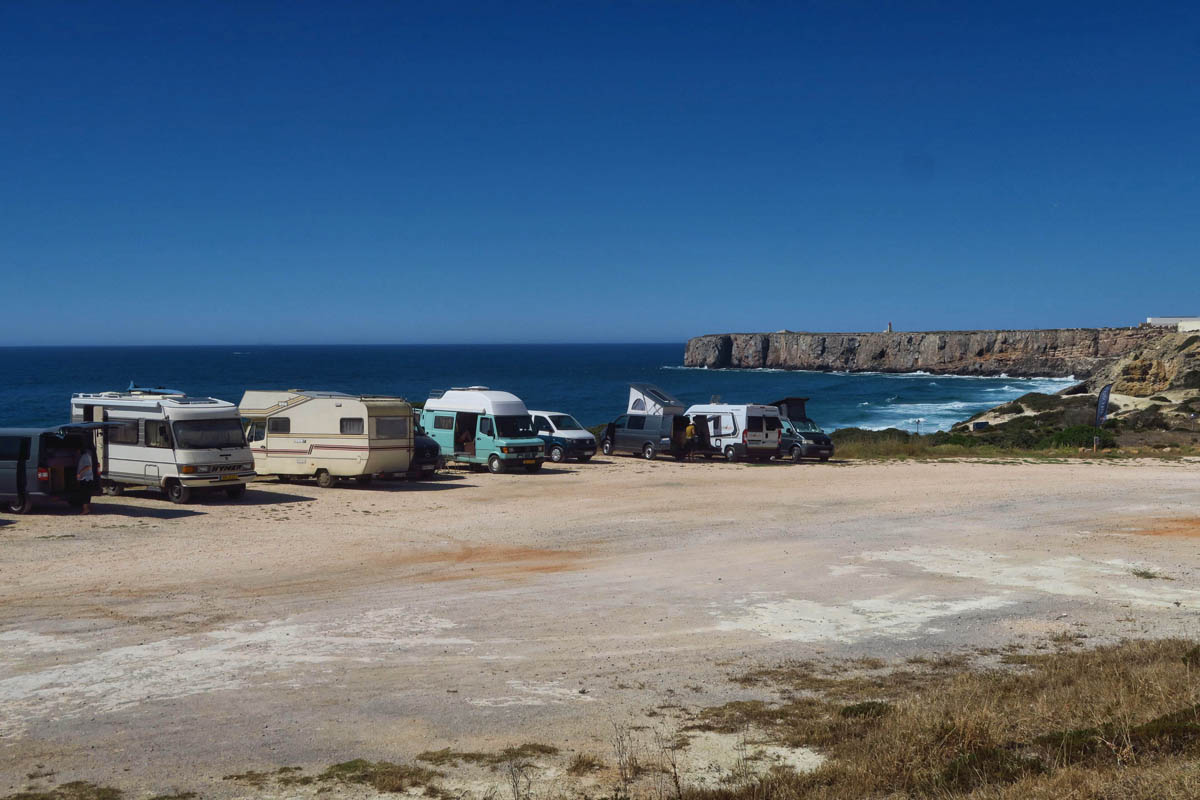 This was just one of many areas where I saw RV parking.

Sagres is a laid back town in the far southwestern corner of Portugal. Like Lagos, since the town ends in an “s,” it’s pronounced “Sagresh.” It shares the same name with the country’s most popular beer, along with “Super Bock,” the competitor.  They are the “Bud and Miller” of Portugal. If you order a beer in a restaurant, it’s likely to be one or the other, Sagres or Superbock. The craft beer craze is only in it’s infancy stages in Portugal. Unless exceptionally thirsty, my strategy while in Portugal is to drink wine instead.  It’s cheap, plentiful, and good!

Sagres is a big surfing community. It’s jagged coast results in wave action and protected coves from a multitude of directions, enabling surfing in a variety of weather conditions. Its headlands and big waves draw an entire community of surfers at all levels, most of whom seem to live in RVs or converted vans. I saw more RVs in Sagres than any other town along the coast.

But the main draw for me was to visit Cabo de São Vicente, the southernmost point in Europe. It’s as far south as I can go. Any further south and I’d be ashore on the African continent. Up until the 14th century, this point was considered to be the end of the known world. The point is marked by the Cape St. Vincent lighthouse, 79 ft atop the 250 ft high promontory. It was originally built over the ruins of a 16th-century Franciscan convent in 1846. Guarding one of the world’s busiest shipping lanes, the Cape St. Vincent Lighthouse is considered to be among the most powerful in Europe. 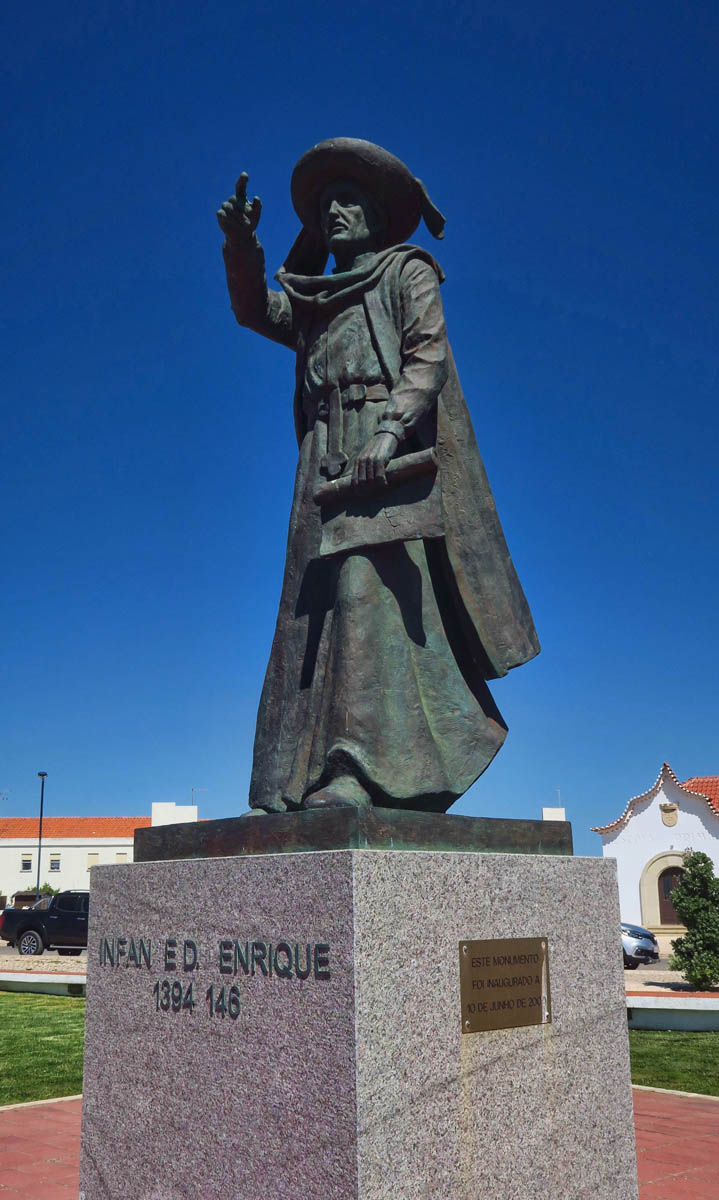 Henry the Navigator, known as the Father of Portugal’s Age of Discovery, was believed to have been based here from where he plotted his course. 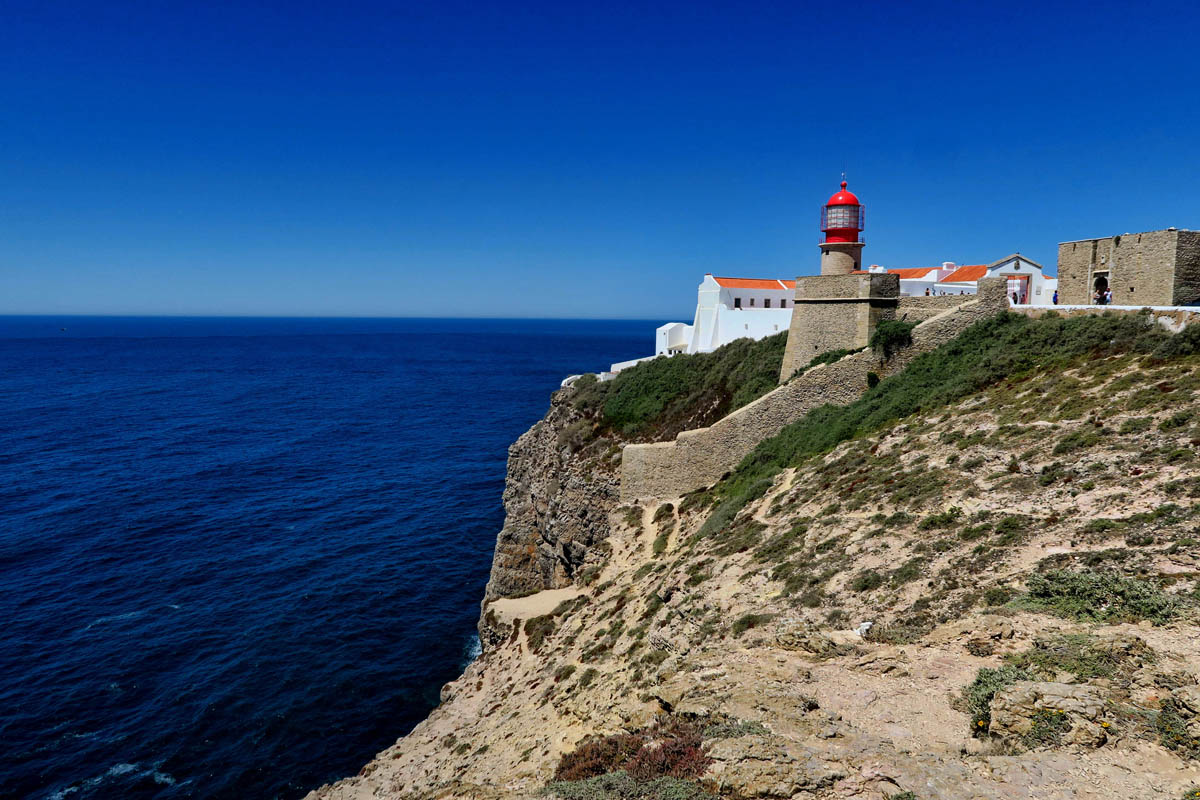 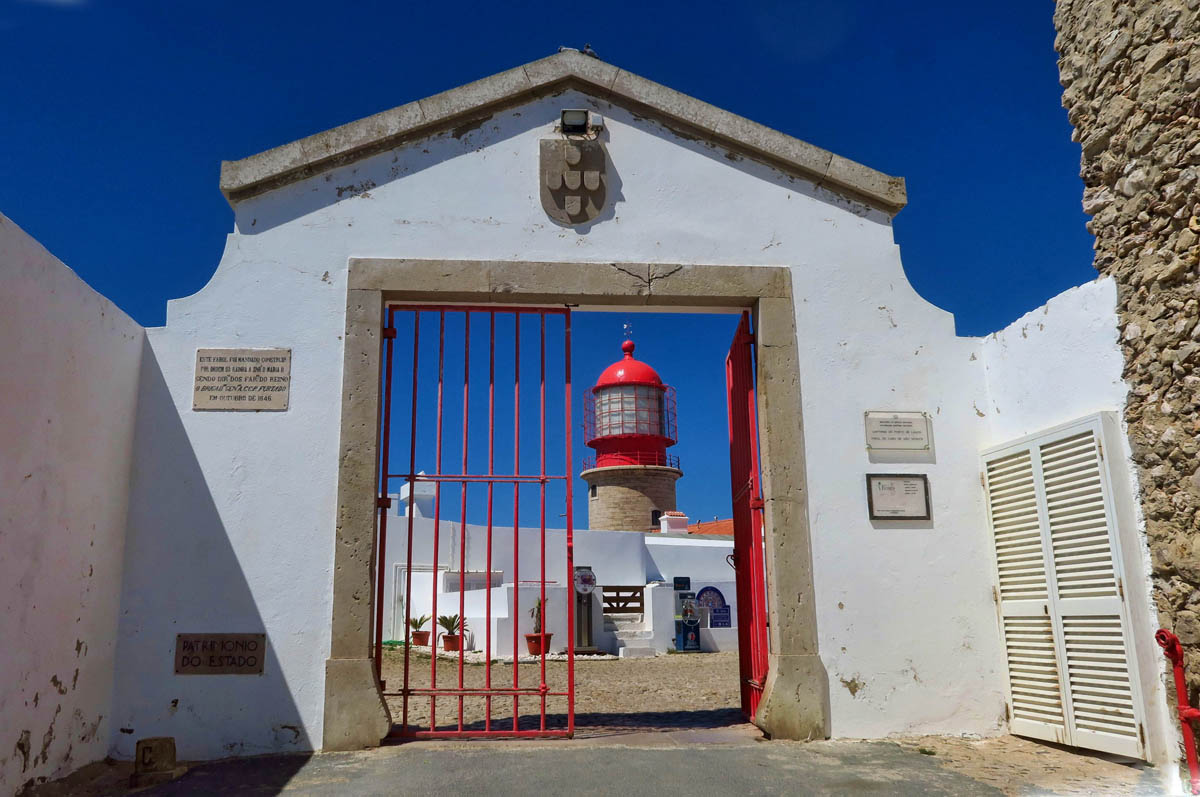 The compound is open daily, but any further access to the lighthouse reportedly happens only on “some” Wednesdays. 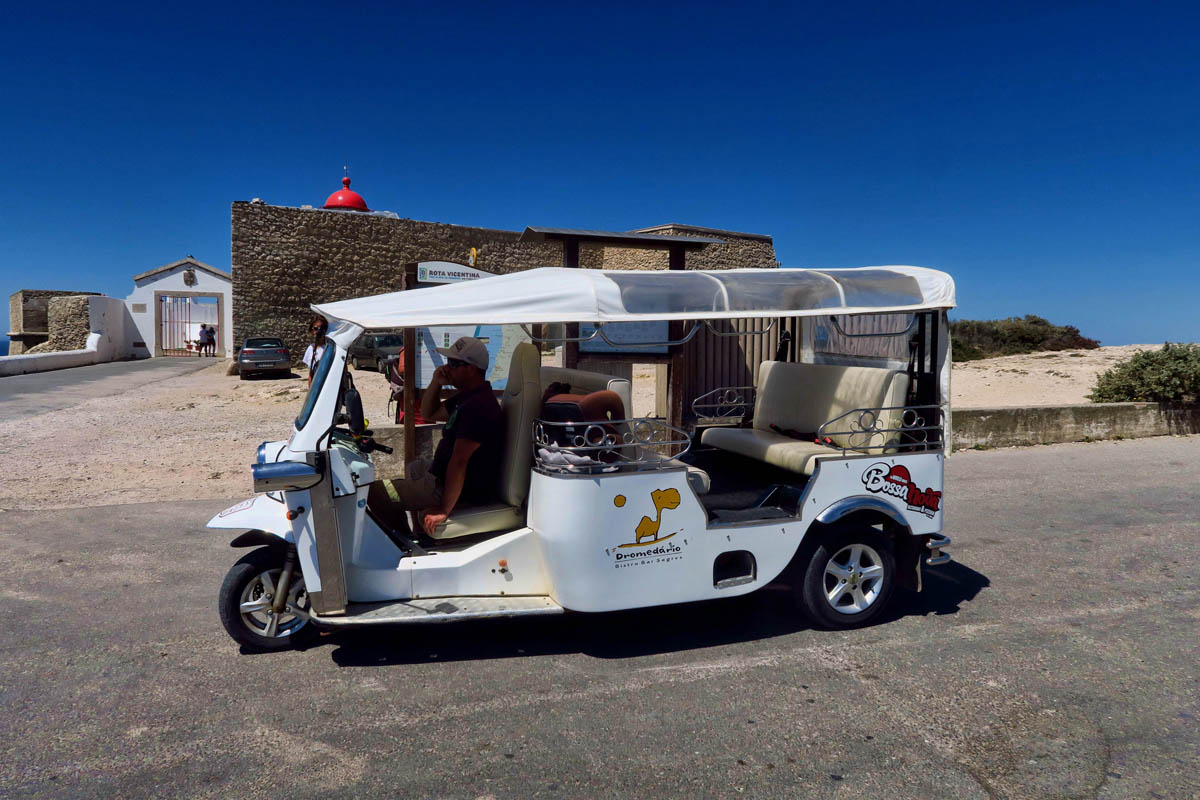 Cape St Vincent is about 7km (4.3 miles) from the bus stop in Sagres. While I could have walked it, I would not have had time to see anything else in town, so I went via Tuk Tuk. 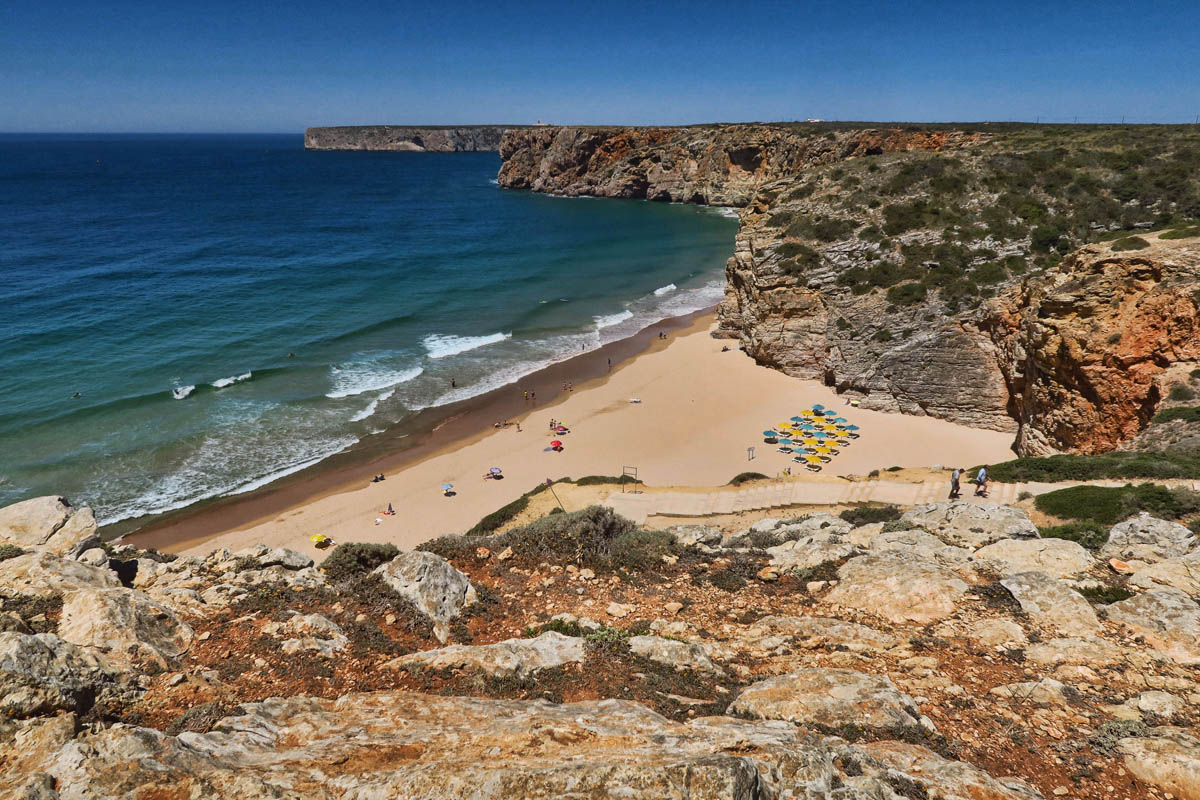 We stopped to view some other beaches along the way. 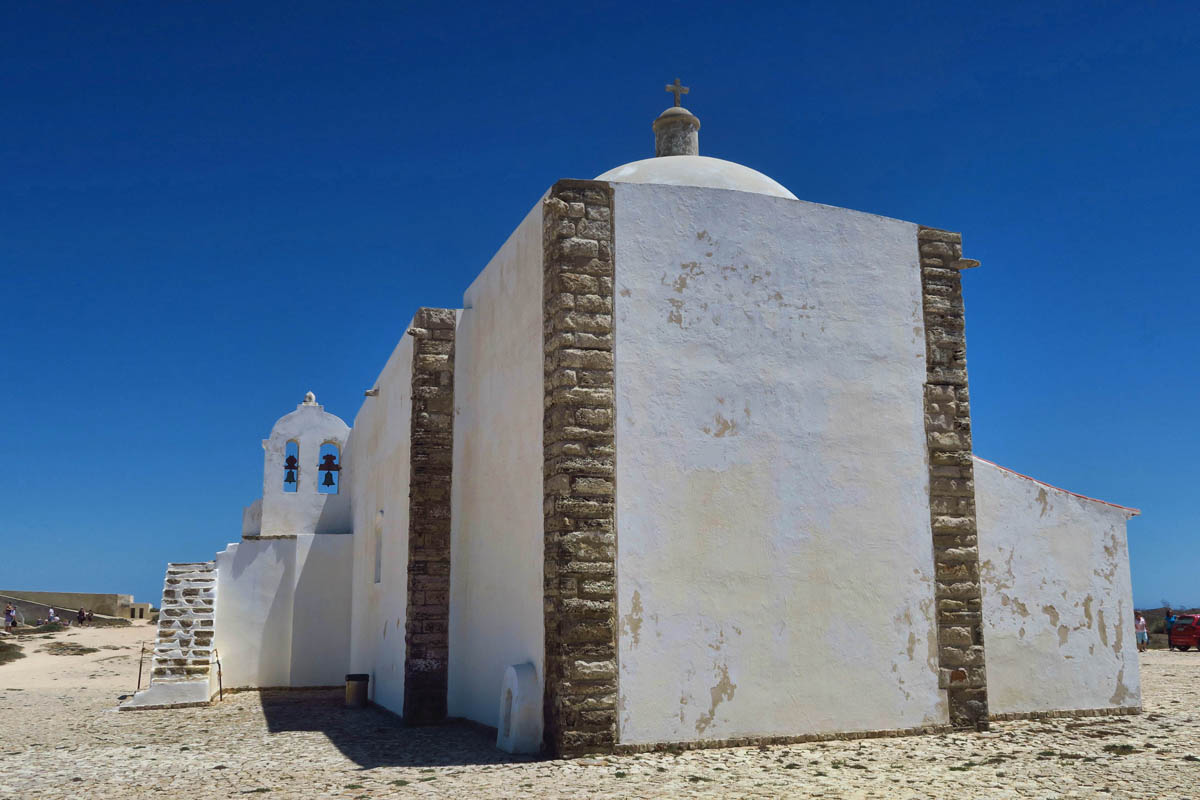 After lunch, I toured Fortaleza Sagres, a 14th century fort that is so far out on the promontory and high above the ocean that only one wall was required to secure it. Most of it has been restored after being wiped out by the tsunami that followed the 1755 earthquake. Some remains of what was believed to be the church during Prince Henry’s time were in this same spot. 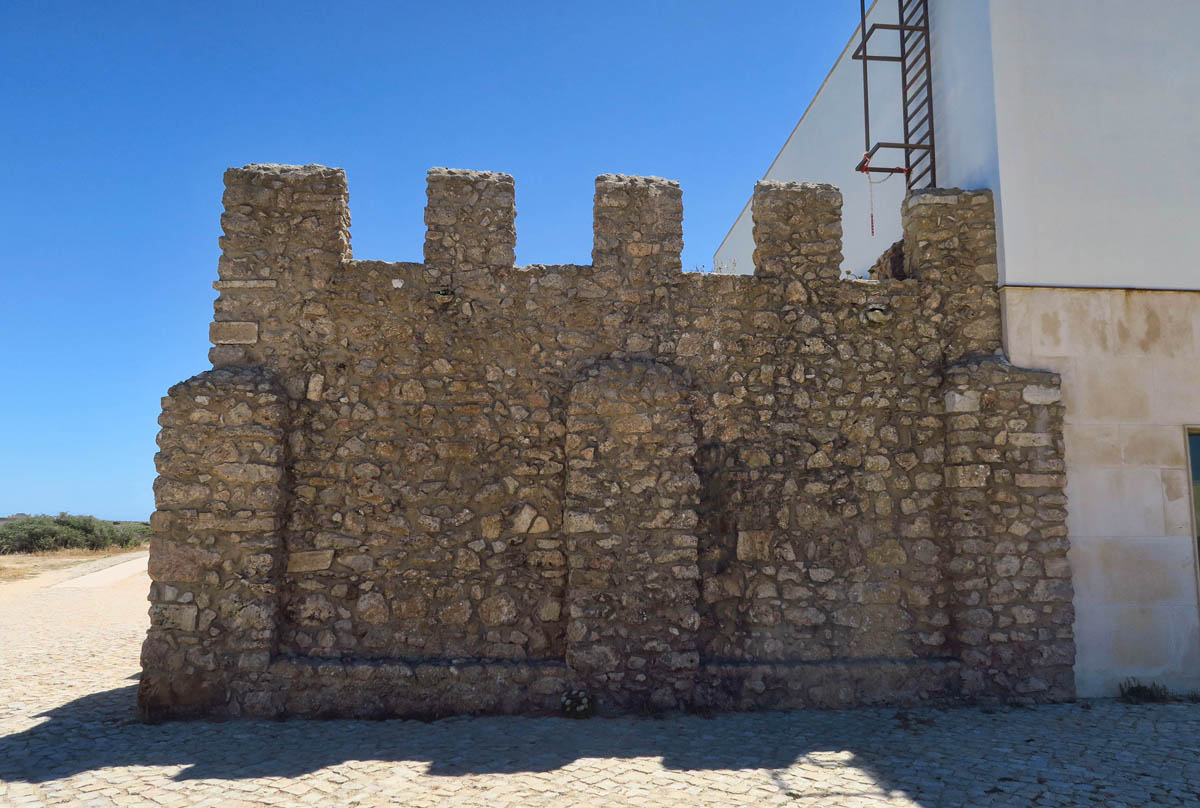 This wall is believed to be constructed at the time of Prince Henry (1443 to 1460) as it appeared on the drawings found from Sir Francis Drake’s Armada in 1587. 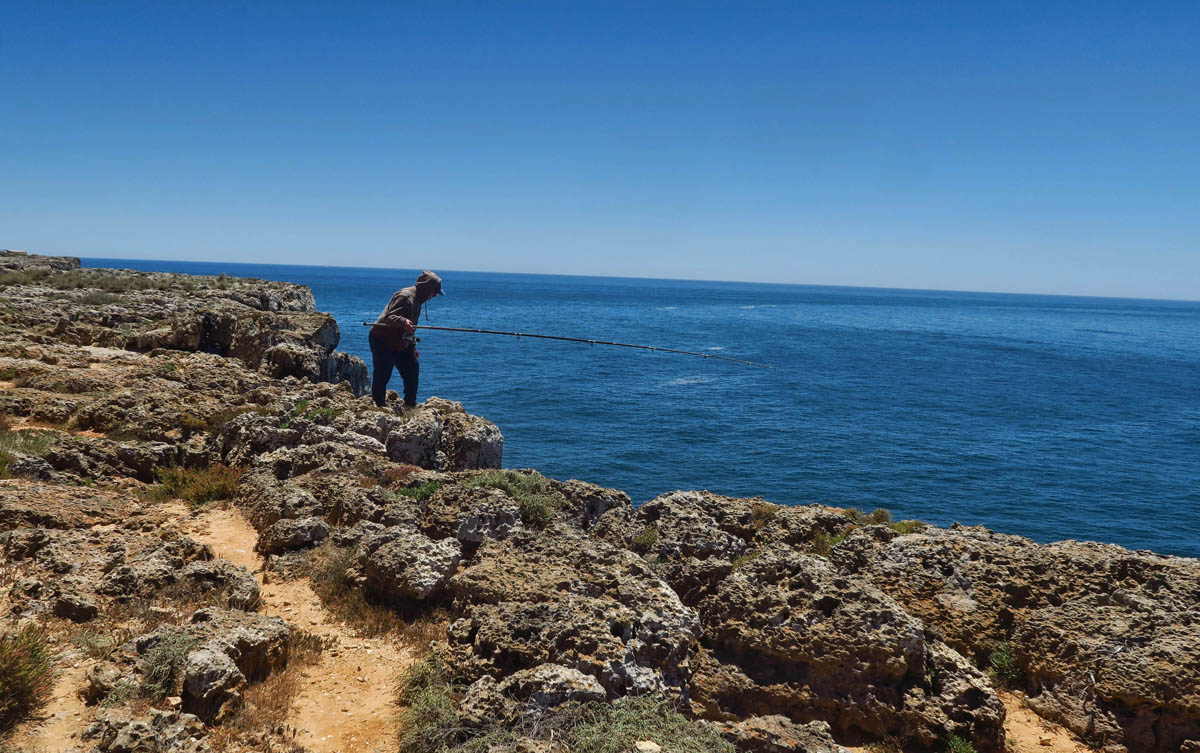 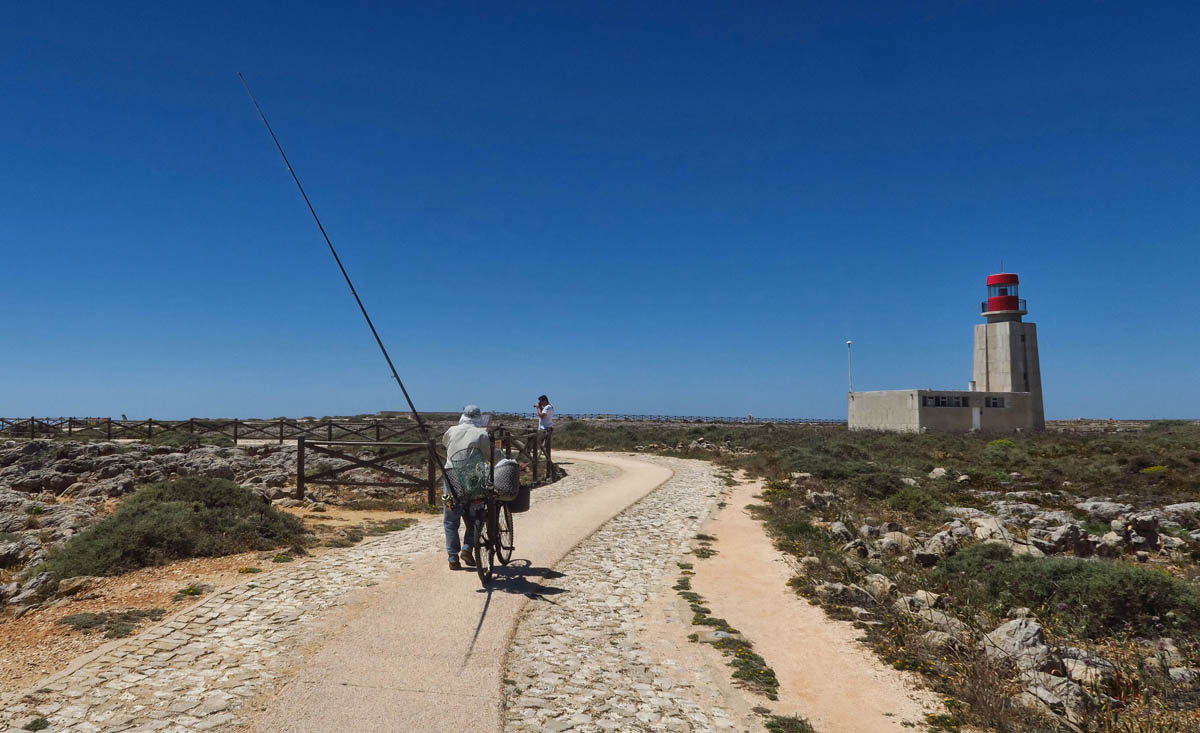 There is a walking/biking path inside the fort, as well as a pretty boring navigational aid. 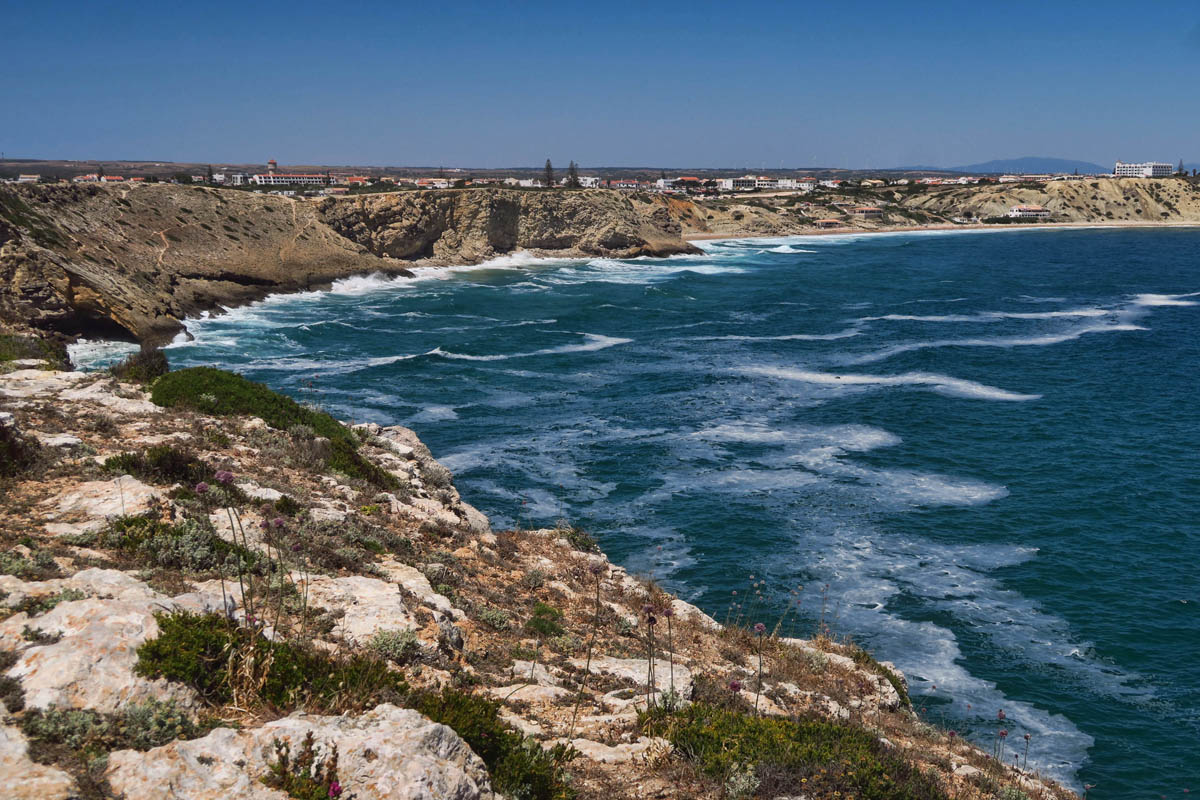 Another massive cove along the scalloped coastline between the fort and Sagres.

Cape St. Vincent is yet another lighthouse in Portugal that’s only open to visitors at limited times, from all indications on Wednesdays.  While one can enter the grounds daily, the lens room was off limits during my Sunday visit. A pity, since it’s reported to contain a “hyper-radiant” lens still in operation since 1906, larger than any of the Fresnel “ordered” lenses. There were only 31 of these manufactured, of which only 12 remain functioning in their towers today, one which I saw in Cape Race, Newfoundland. I would have loved to see it, but had no access since I couldn’t work out a Wednesday visit.  Again, lighthouse visitation does not seem to be much of a “thing” in Portugal. 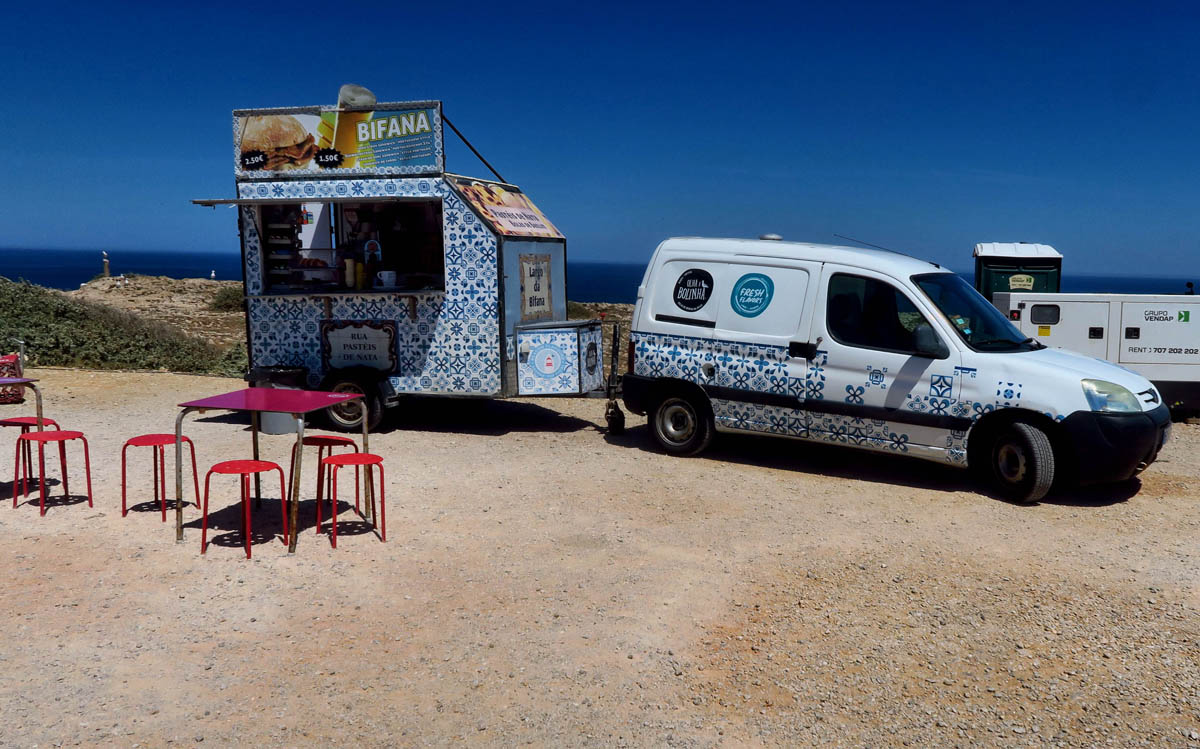 I liked the azuelo design on this food truck. 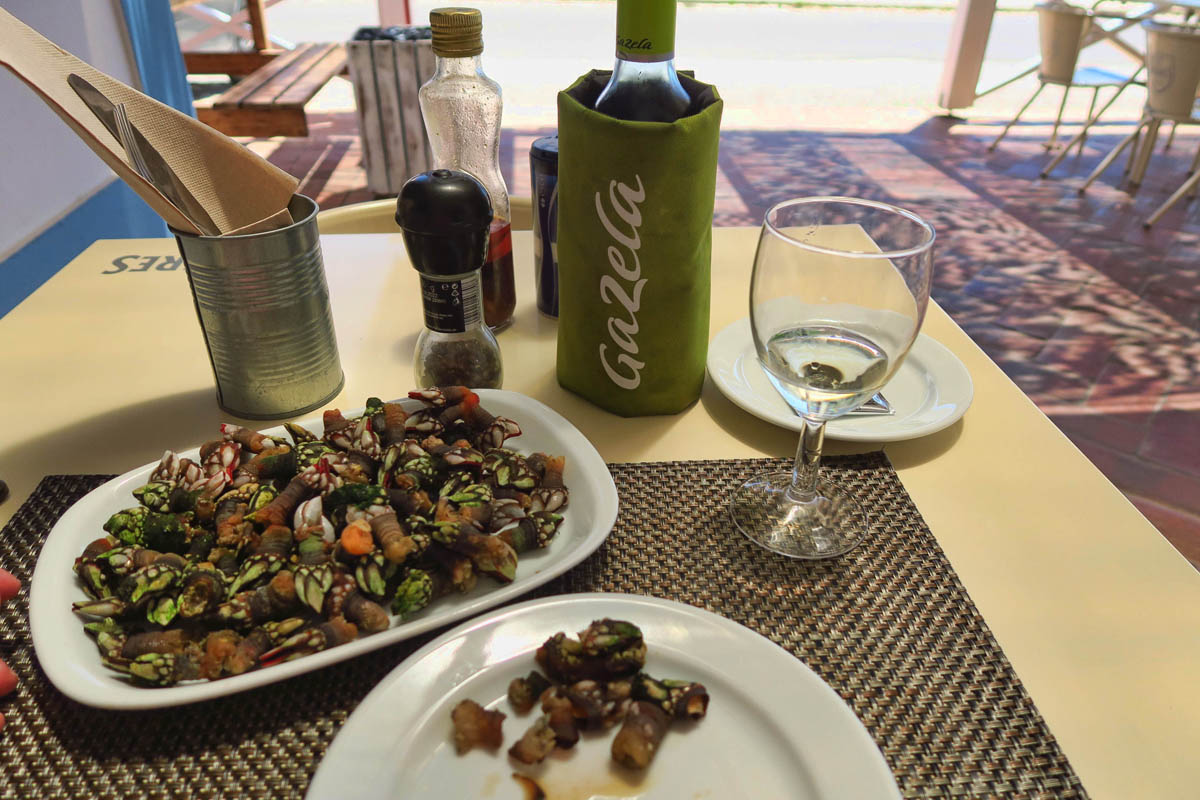 I stopped for lunch in Sagres. Having so much coastline, Sagres is known for its “percebes,” aka gooseneck barnacles, considered a delicacy because they are harvested by hand in the dangerous surf conditions along the rocky coastline. They tasted like clams. 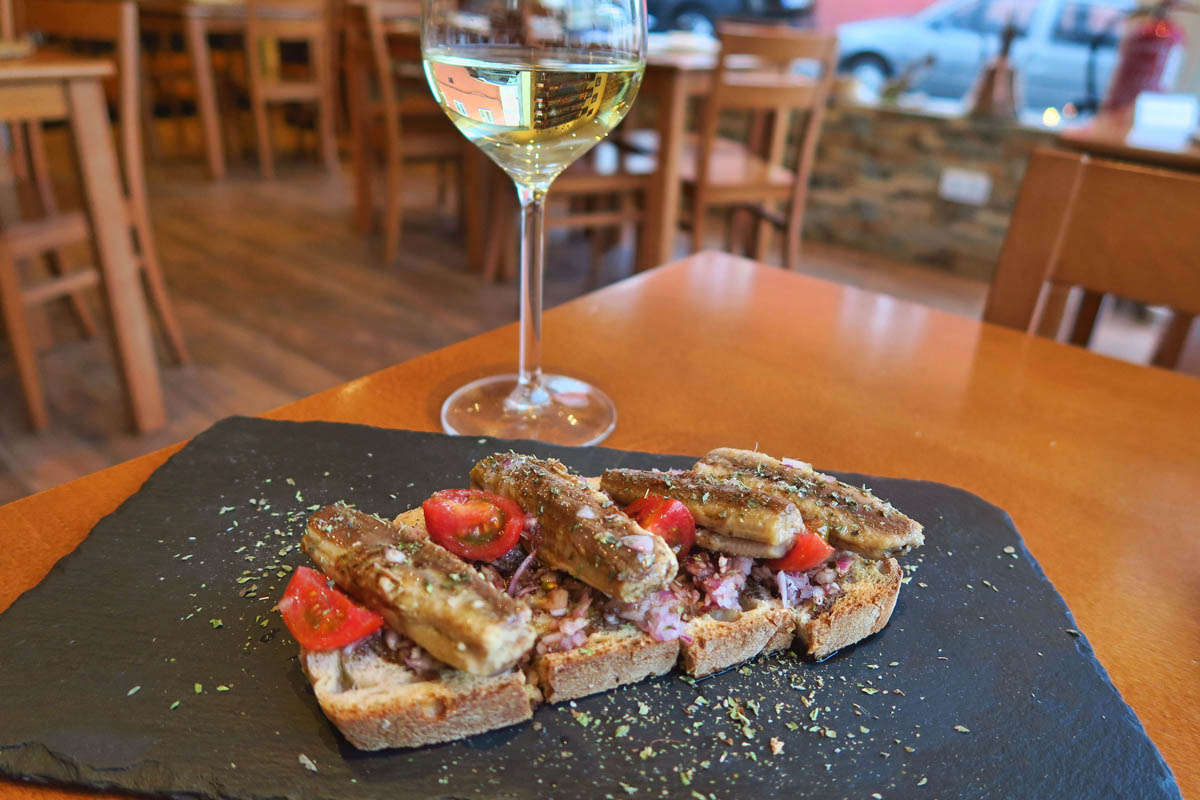 This was dinner after the Almancil trip, in what I started calling “Chalkboard Restaurants,” small tapas bars that have a different menu each night, so it’s written on chalkboards. This was bruschetta with smoked sardines on top. 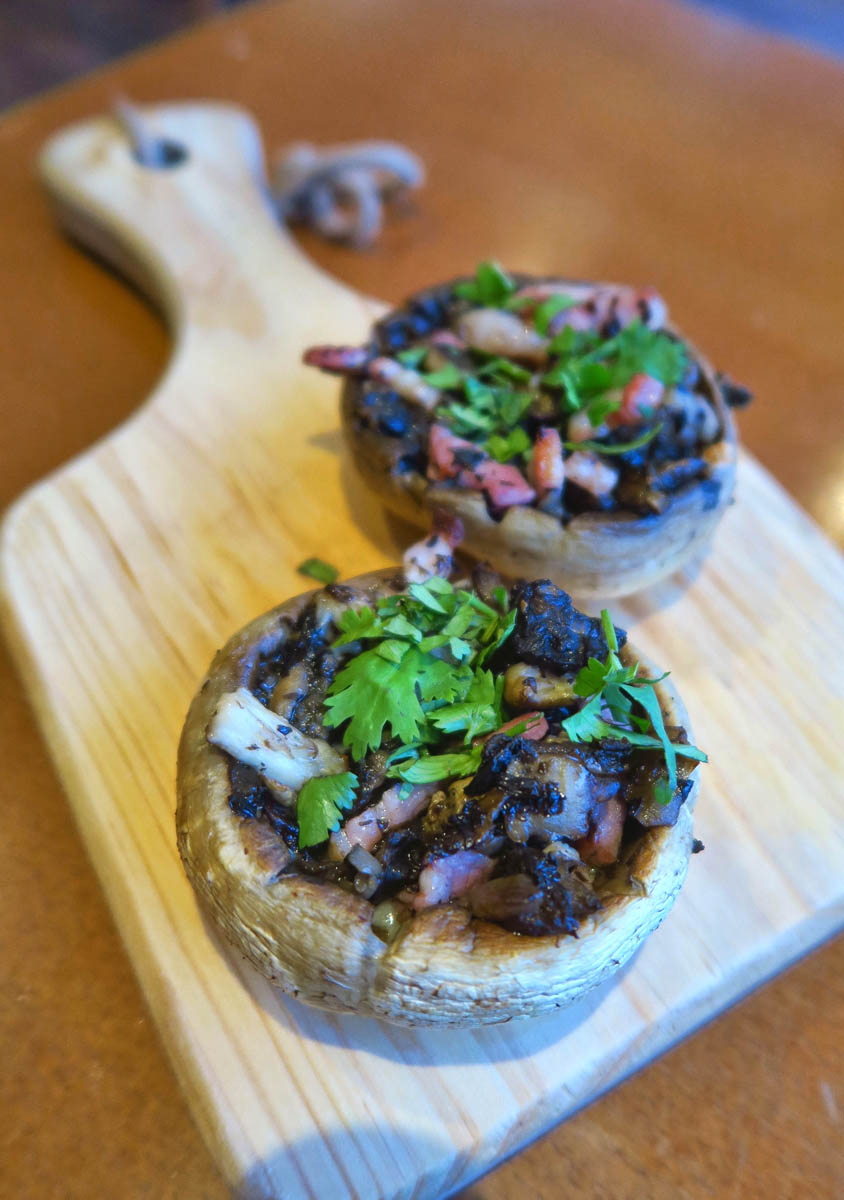 Also had stuffed mushrooms, which together made a lovely light dinner.

A different sort of day trip I took from Lagos was not quite as pleasant. Having fallen in love with all the gorgeous azuelos,, blue and white tiles in Portugal, I had read about an exceptionally beautiful church in nearby Almancil, Igreja de São Lourenço, or Church of St. Lawrence, covered from top to bottom in the 17th century tiles. It was reported to be one of the most beautiful churches in Portugal, so I wanted to see it. But it would end up taking me four different buses to get there and back (a change in each direction) and a 45 minute walk because the bus driver told me there was only one bus stop which was on the opposite side of town (a miscommunication.) It took me two hours and 45 minutes just to travel a little over 40 miles. After walking for 45 minutes in the mid-day heat, I had to cross a ditch filled with stickers to get across the highway to reach the church. Once I got there, I felt as if I had made my own sort of pilgrimage.

Once I reached the doors of the church, the first thing I saw was a huge tri-color poster board warning “NO PHOTOS!” Whaaaaaaa??? I had come all this way and couldn’t even take a photo to remember what I had seen? There was even a very stern woman guarding the chapel.

This is a tiny chapel was lined with breathtaking porcelain beauty. Every square inch was covered in delicate blue and white tiles, framed by gilded gold at all the edges and corners. I felt like Alice in Wonderland shrunk to fit inside a delicate Limoges china jewel box. I sat on the pew for almost an hour, just studying the scenes surrounding the chapel, trying to absorb the story of Saint Lorenzo and his unflappable faith. But I could hardly focus on the murals for steaming about the “no photos” rule.

And then…for one brief moment, the stern woman with her arms in what seemed to be a permanently folded position, never dropping her stern gaze from her trained eye on we tourists, stepped out of the room.  The opportunist in me took over, and I couldn’t stop myself. Right or wrong, I slipped my stealthy black Canon G7X out of my black shorts pocket and fired off a few random shots from the hip (rotation correction compliments of Photoshop.) Was it disrespectful to defy the rules inside a place of worship? Was it wrong for me to want to have a few remembrances of my own when there was a whole display rack of postcards for sale for €1 each out in the foyer?

It could almost annoy me to pay an admission fee to enter a church. I always try to drop some coins in the donation box when visiting, but it’s becoming more common now to see churches in tourist areas require a mandatory admission charge to enter. I can understand, since upkeep is necessary to preserve these works of artful history. I had already paid €3 to enter the chapel of San Lorenzo, and another 0.60 for a one-page pamphlet describing the scenes of the tile work. Now, they were forbidding any personal photos. Was it to boost sales by asking another euro for a postcard? Why was I forbidden when dozens of Pintrest members had been allowed?

When judgment day rolls around, let the record show that I, Suzanne, broke a commandment, my only crime being to “steal” a few pixels….Father, forgive me for I have sinned. 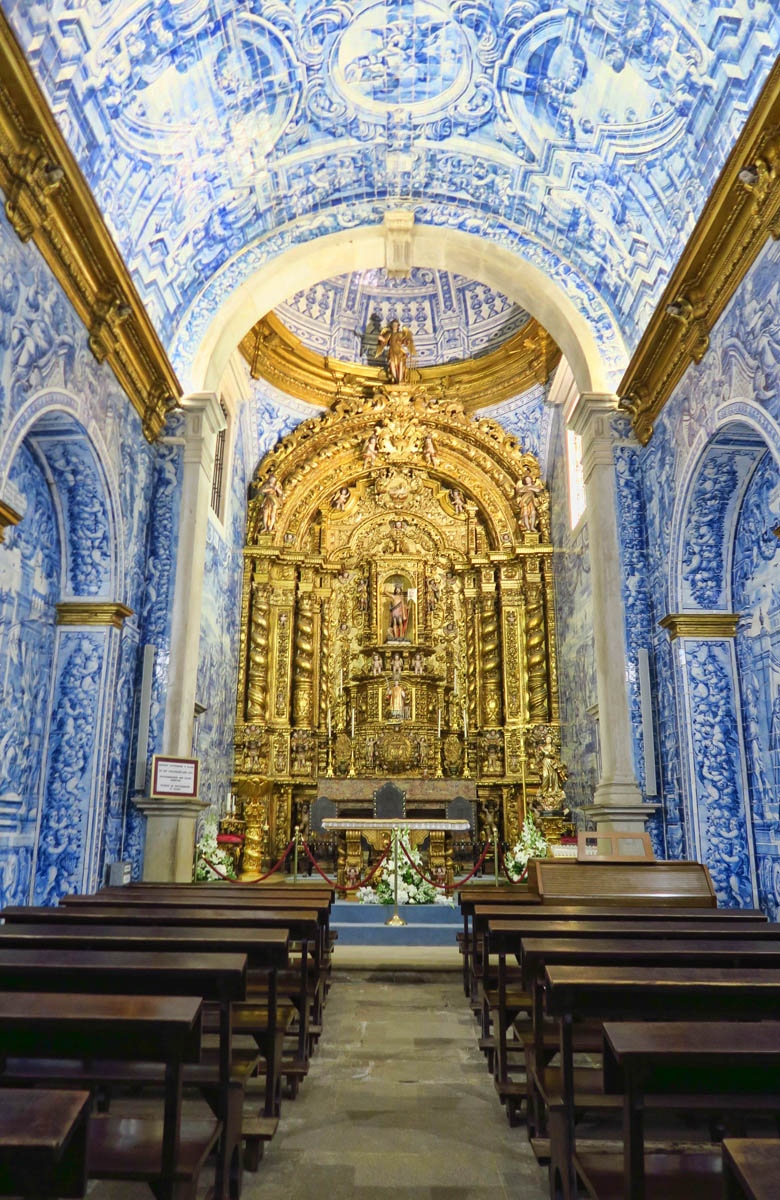 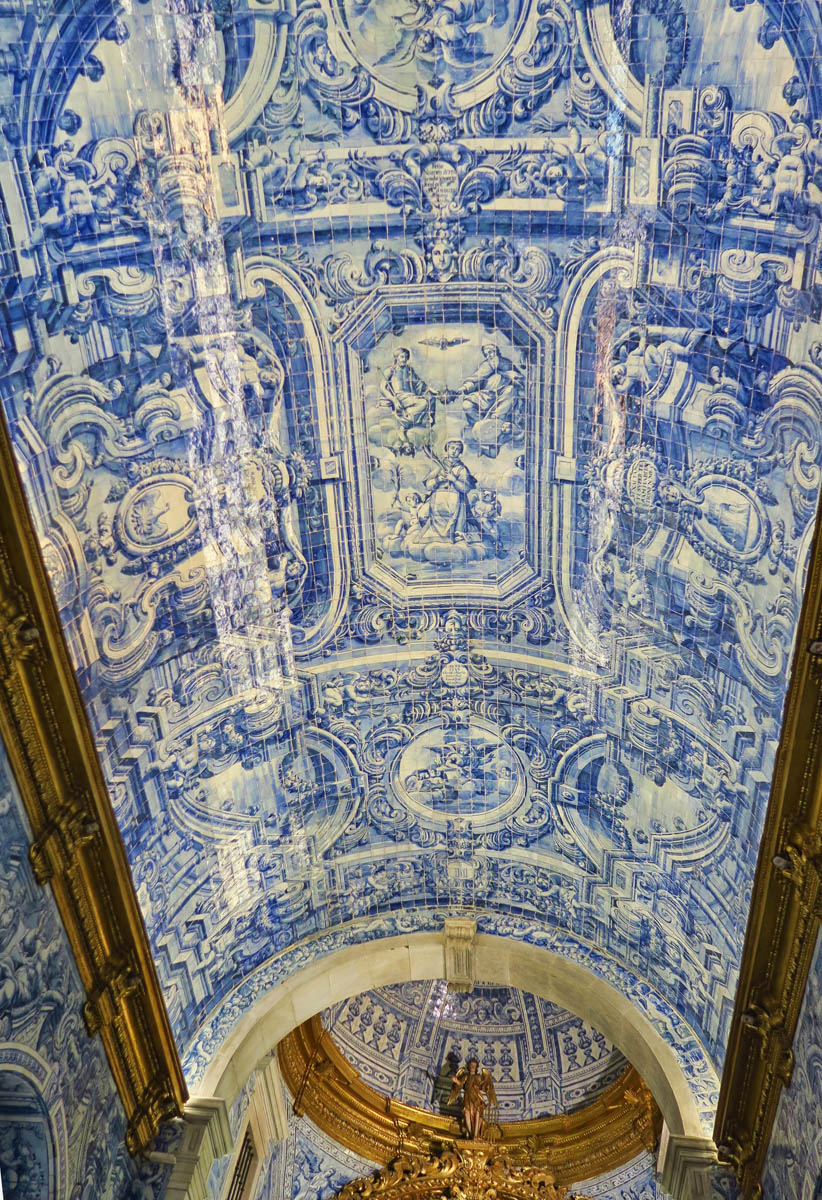 The small church has a rounded, “barrel vault” ceiling completely covered in tiles. 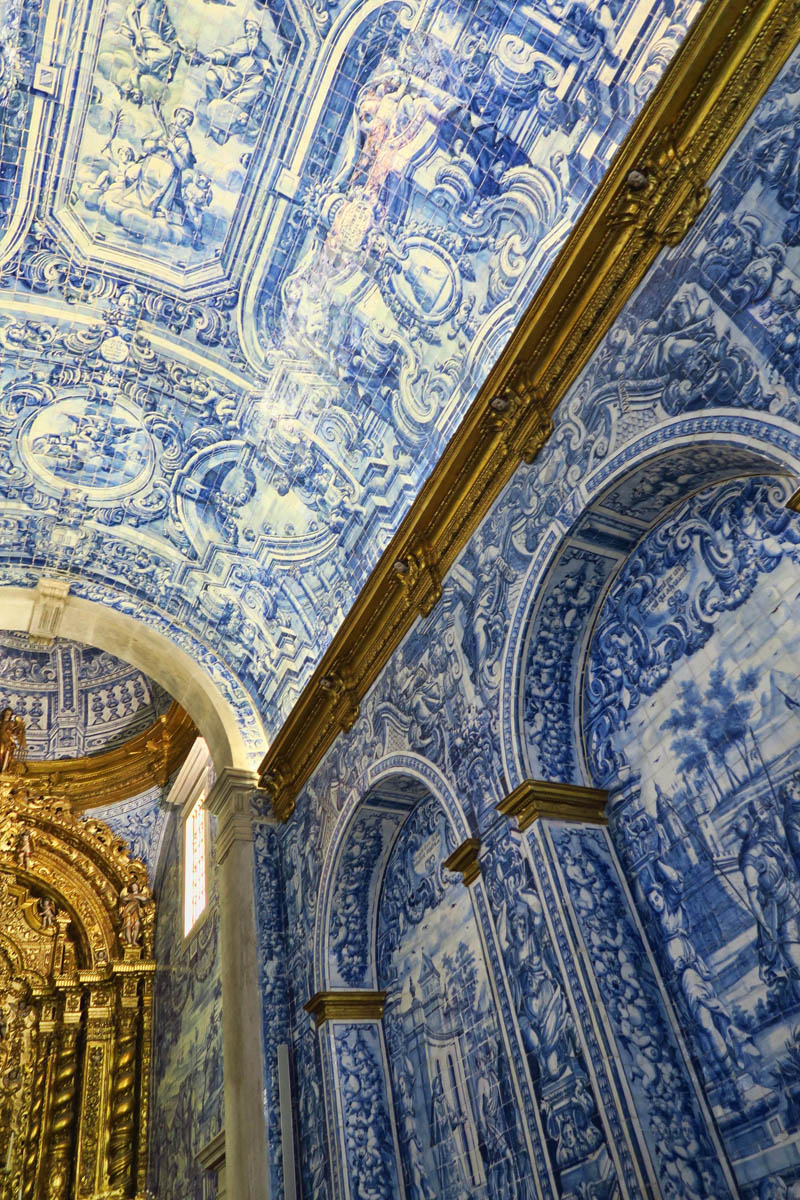 From this angle in the lower left quadrant of the photo, you can almost see the chapel dome, also covered in tiles. 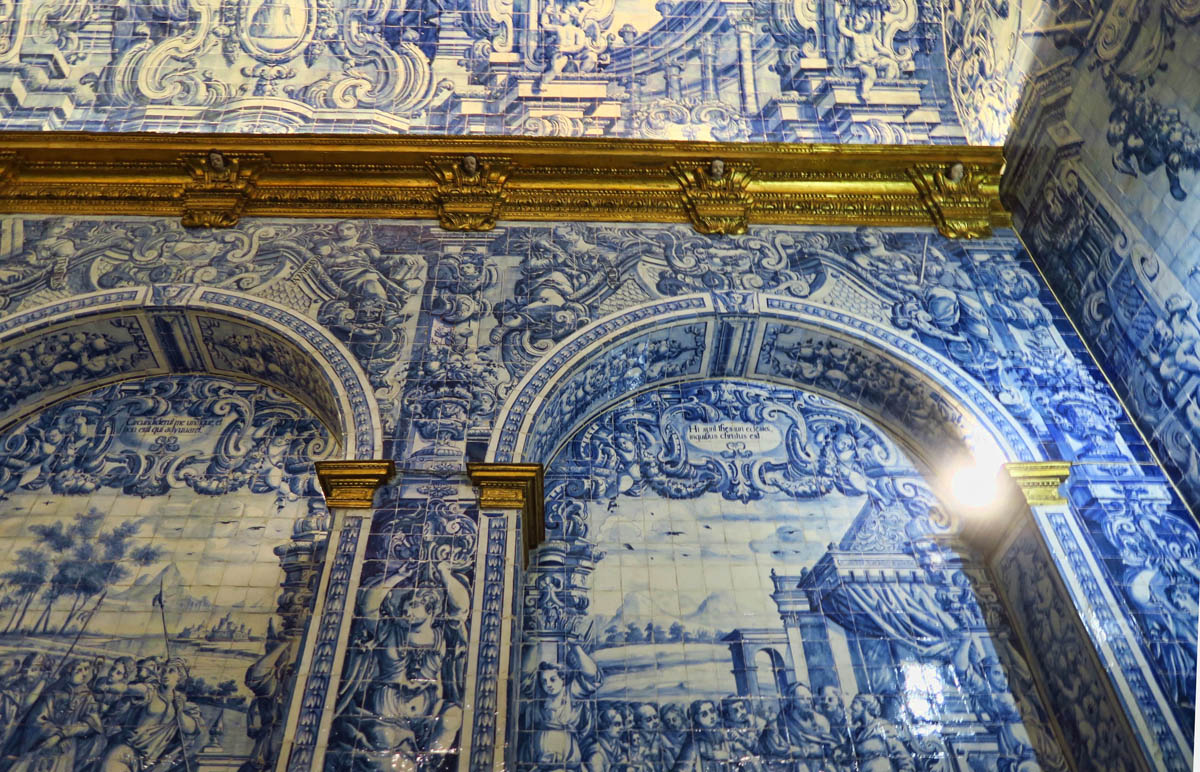 Each arch depicted scenes from St. Lawrence’s life. This was the finest tile work I had seen yet. 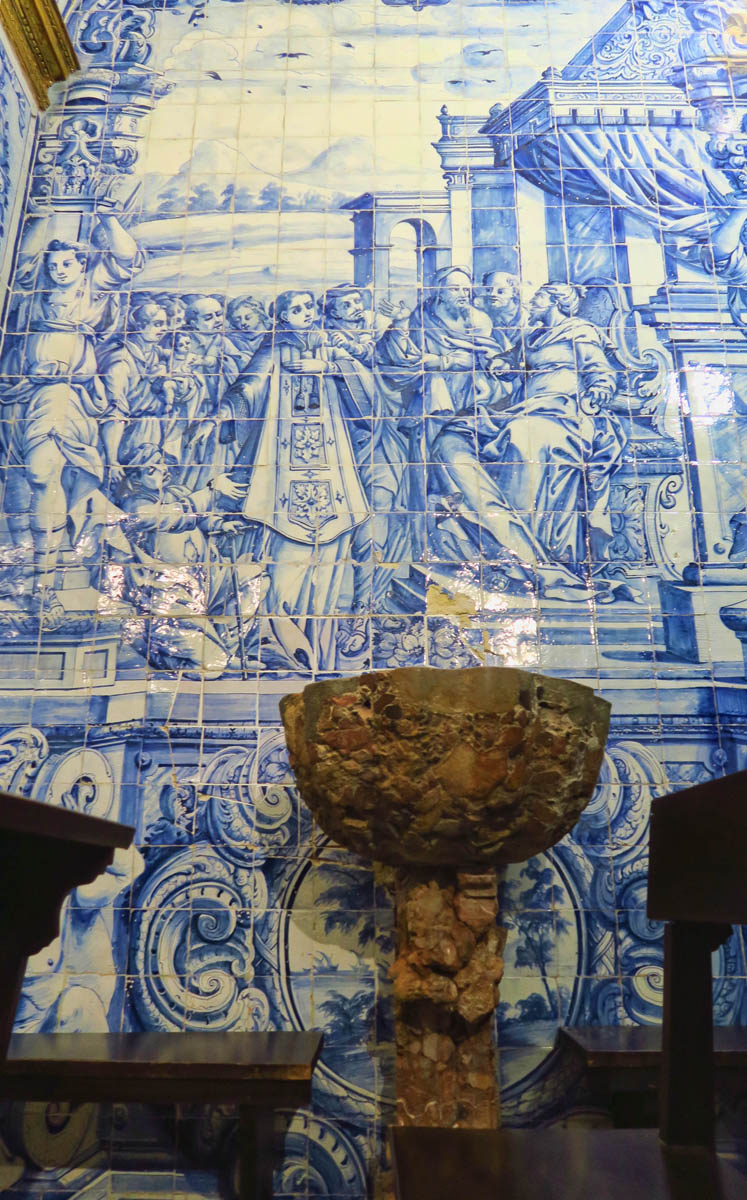 Since St. Lawrence was known for giving the gold to the poor rather than the church, surely he wouldn’t begrudge me a few parting shots. 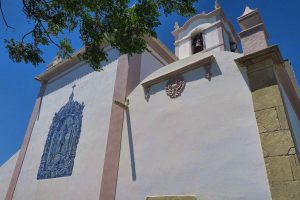 Of course, photos outside are allowed, but the beauty is inside. 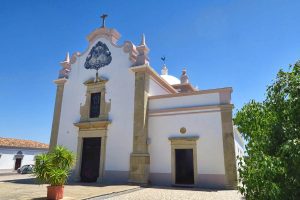 There is really nothing else to see in Almancil other than this beautiful church, but if you are passing through, it’s worthy of a visit.

9 thoughts on “Surfers and Sinners of the Algarve”