While motoring along the coast on my Benagil boat tour, the guide pointed to a series of boardwalks along the coast remarking, “That’s all part of the Seven Hanging Valleys Hiking Trail,” at which time my ears immediately perked up. I’d not heard of this trail before. Once back to the laptop, I did some research to learn it’s rated as one of the most beautiful hikes in Europe! 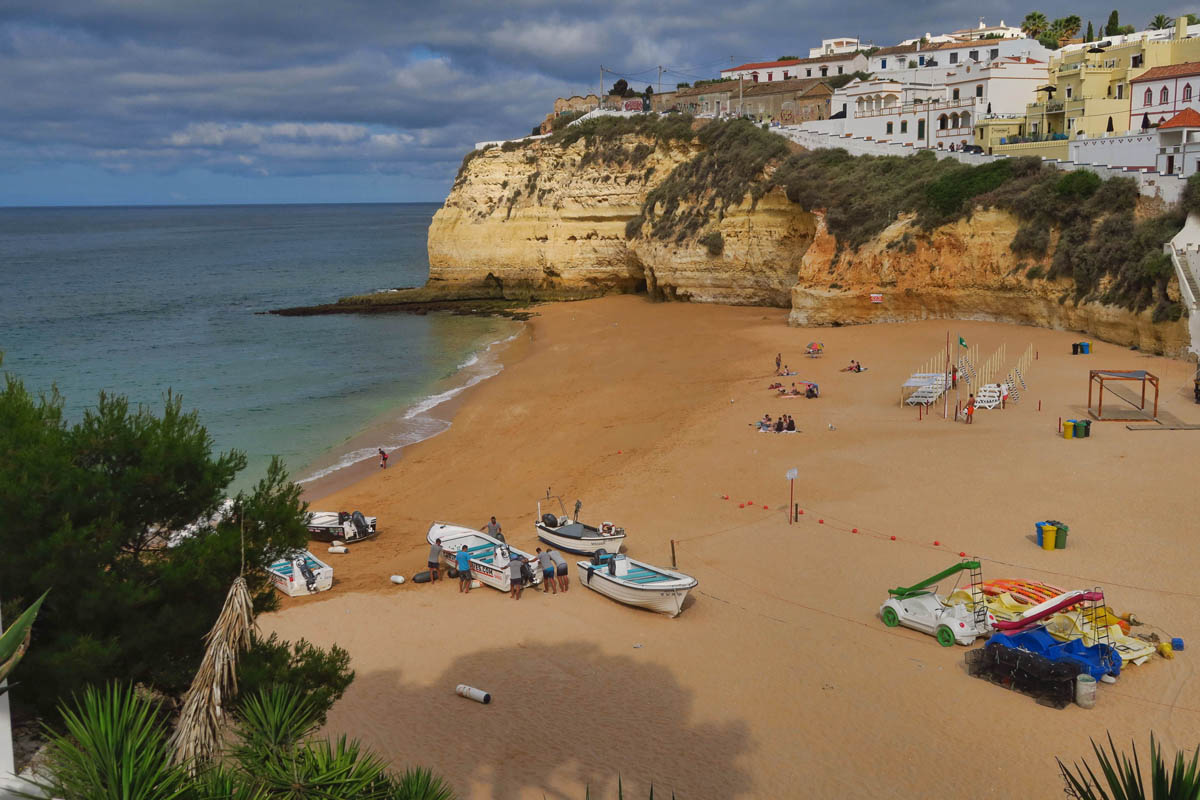 Leaving the town of Carvoeiro up the steep staircase from the beach. Note the men below who carry the boats to and from the water each day. 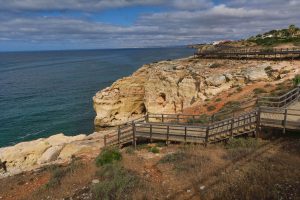 This boardwalk section of the Algar Seco is not part of the official Seven Hanging Valleys trail, but I must hike it to get from the bus stop to the trailhead. 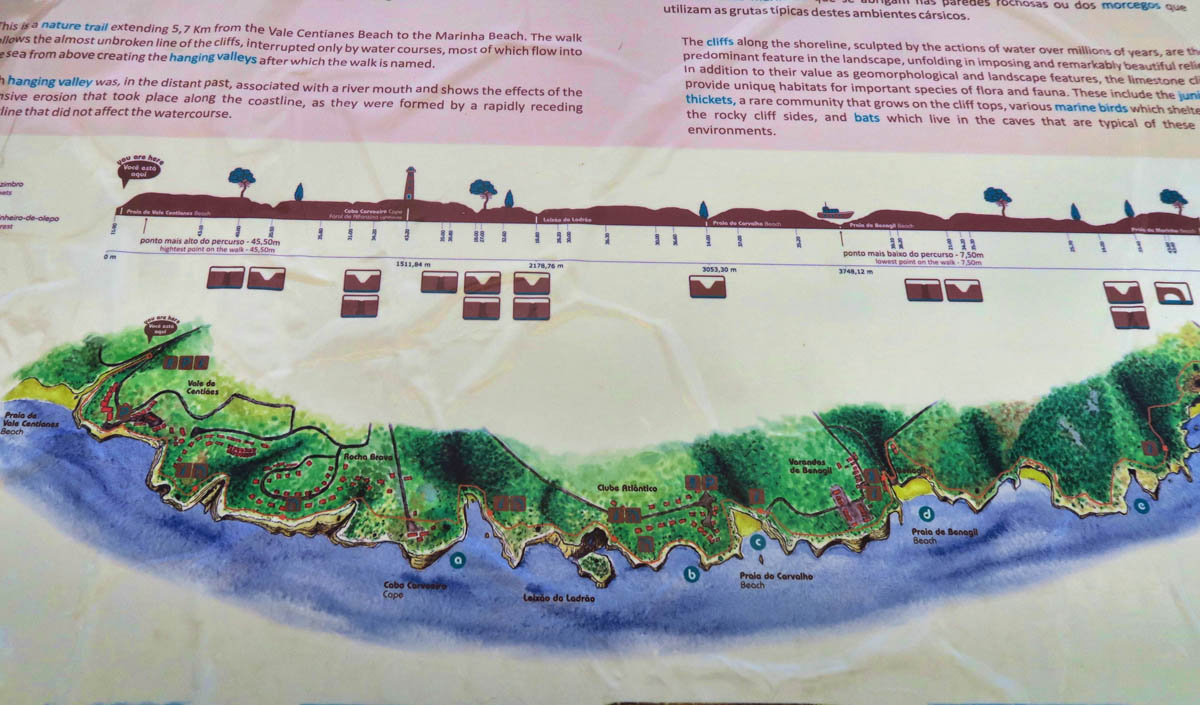 The official trail begins at Vale Centianes Beach, but there is no bus service there, so I had to start a couple of miles back up the road. 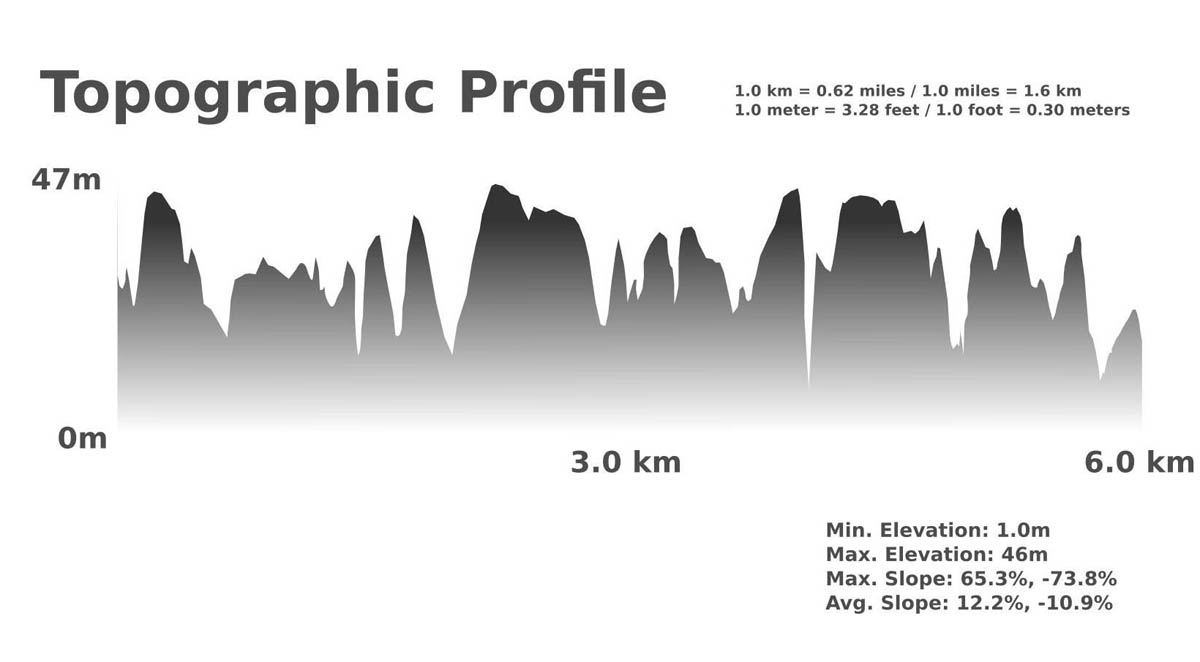 This topographic profile is why I am glad I am not going to try to do the entire hike in one short visit.

The official trail runs between two of the most gorgeous beaches in the Algarve region, Vale Centianes Beach to Marinha Beach. The walk follows the coastline, interrupted only by the courses where over past centuries, water flowed into the sea creating the hanging valleys after which the course was named. These hanging valleys were once the mouths of rivers which created “pour overs” through erosion in the massive limestone cliffs made up of million year old marine invertebrate fossils.

The dissolution of the limestone by surface and ground water has led to the crevasses and cavities, eroding sinkholes which originally separate off creating sea stacks, arches, and erratic karst formations. As the coastline has receded more quickly than the outline of the water course, water now flows into the sea from above, forming what is known as a “hanging valley,” from which the trail gets its name. 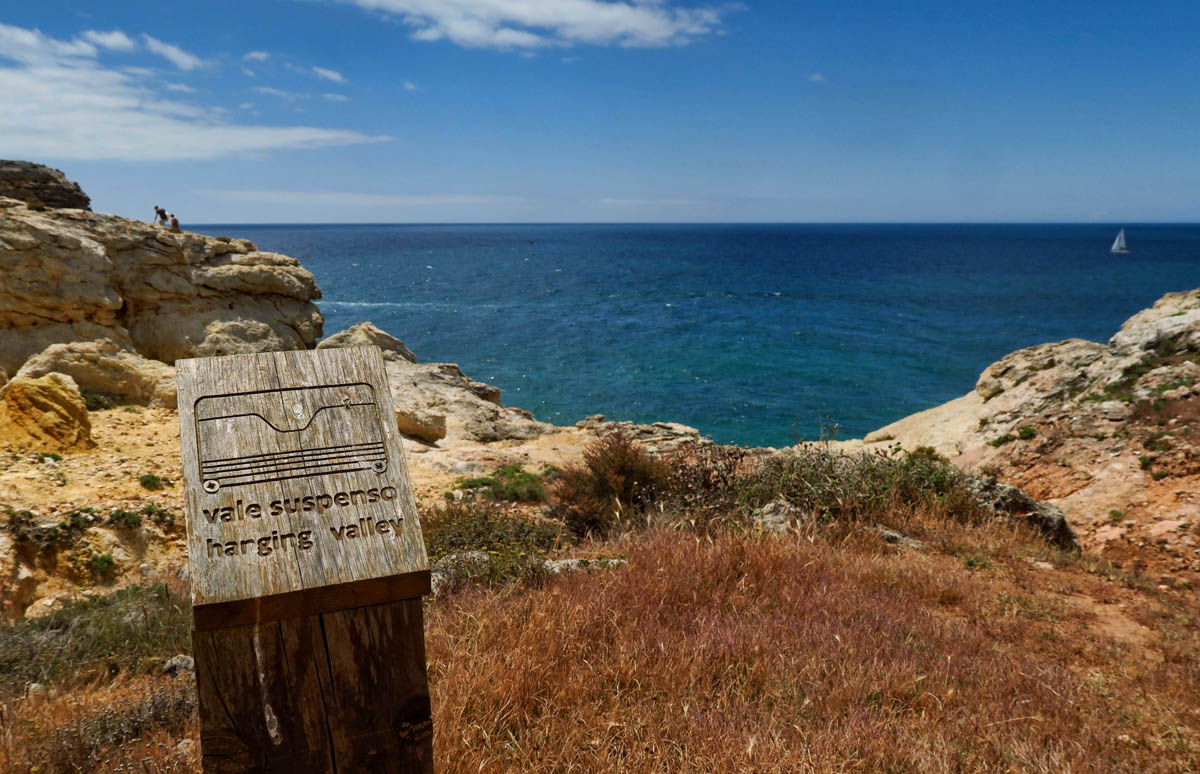 There are seven of these “hanging valleys” along the way. 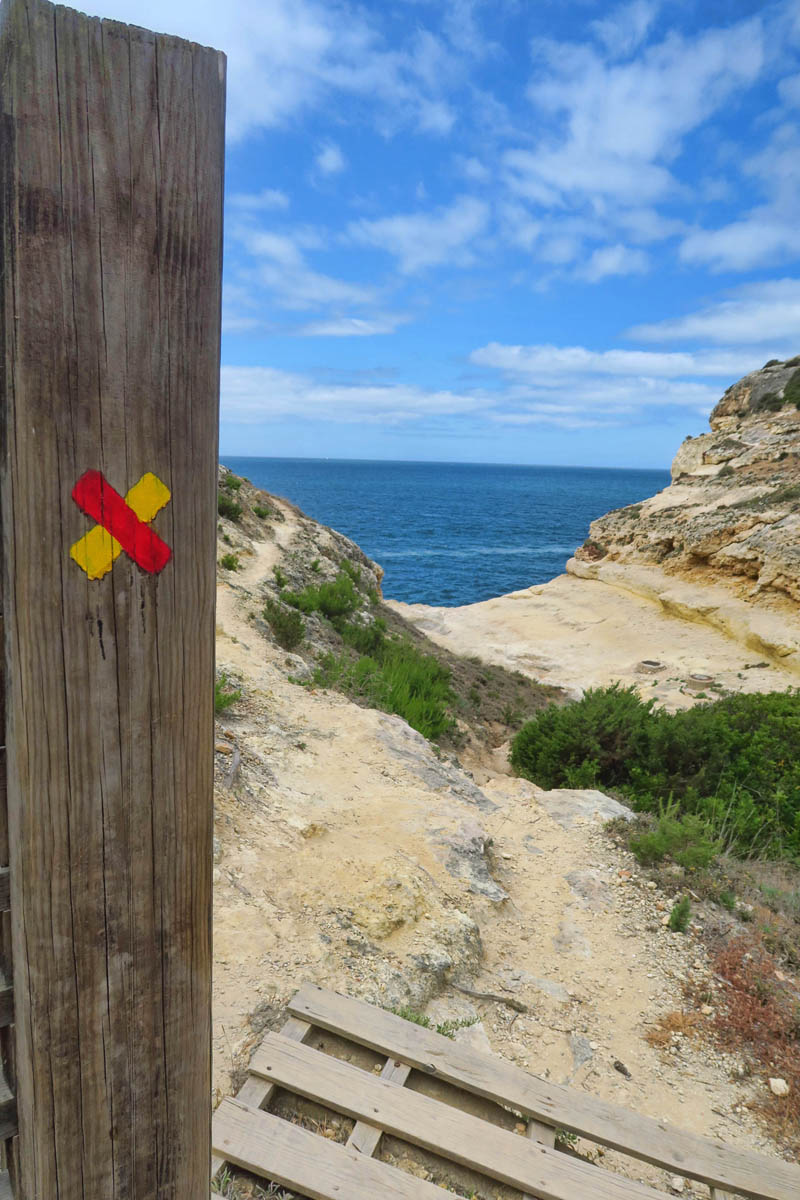 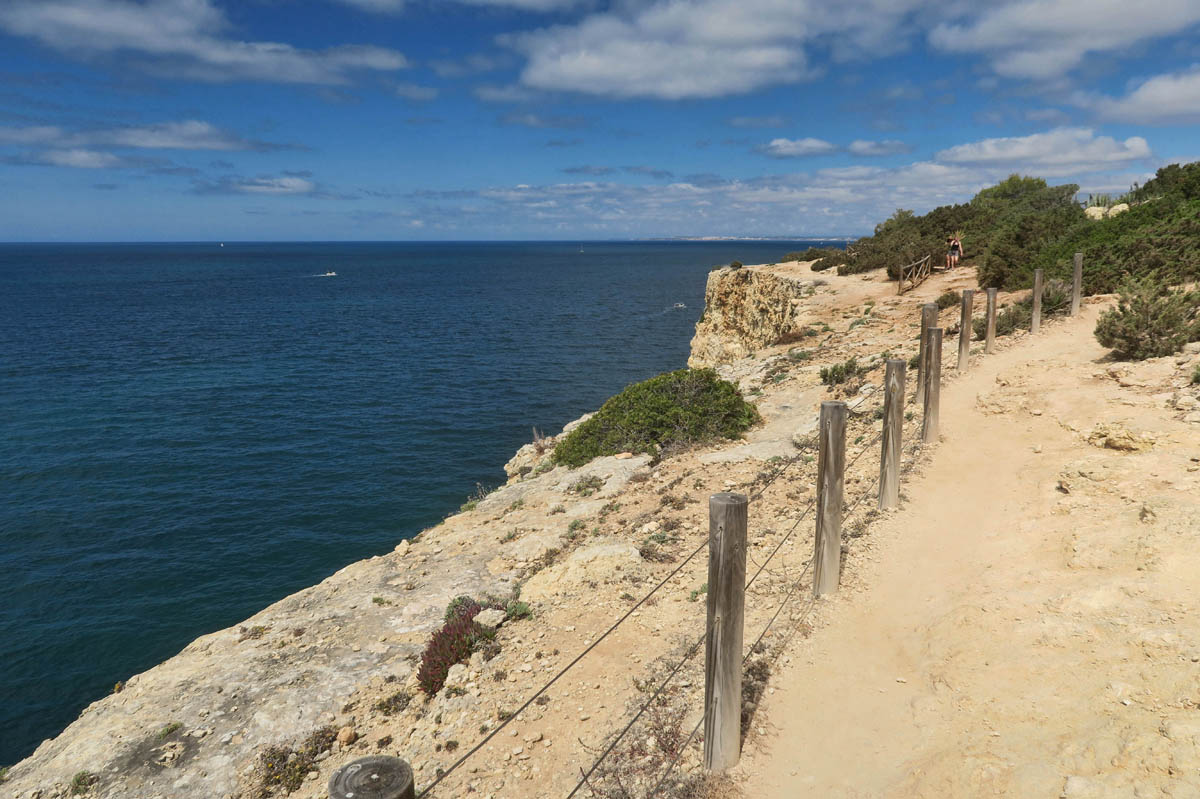 In areas of exposure or danger of erosion, the trail is fenced. 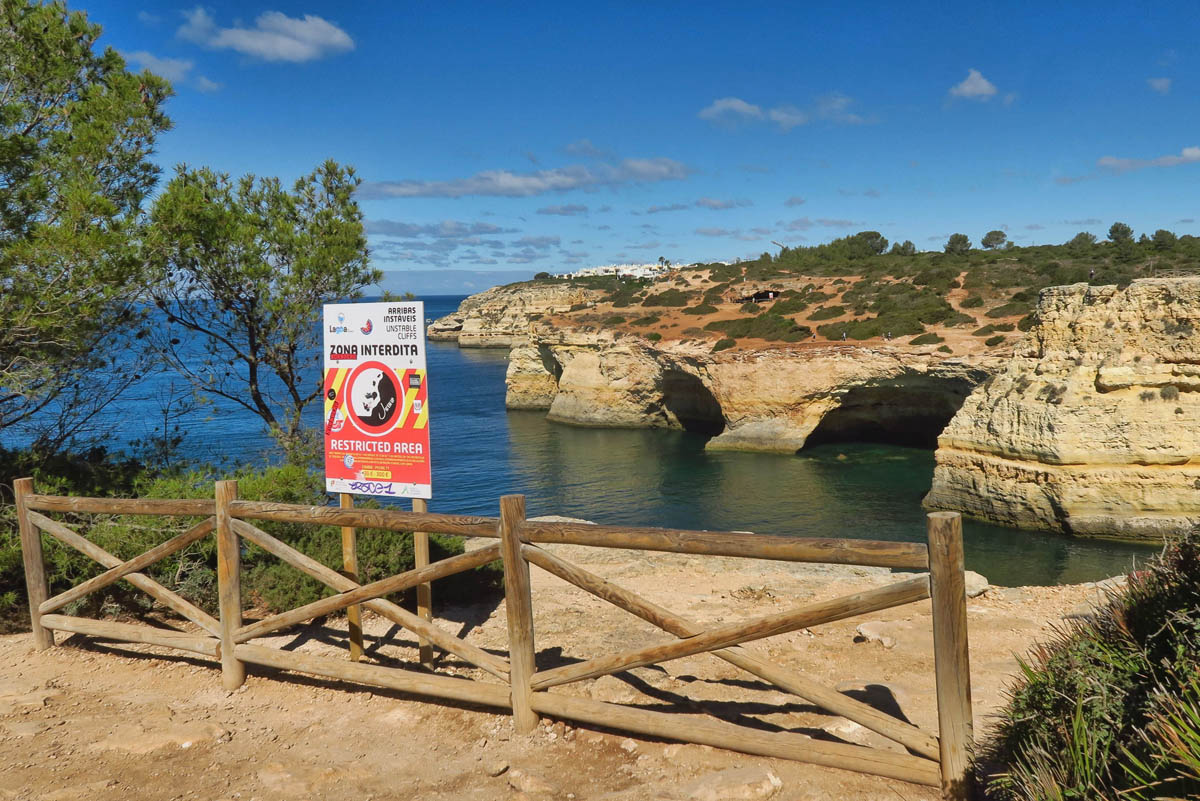 Signs indicate when it’s dangerous to approach the cliffs. 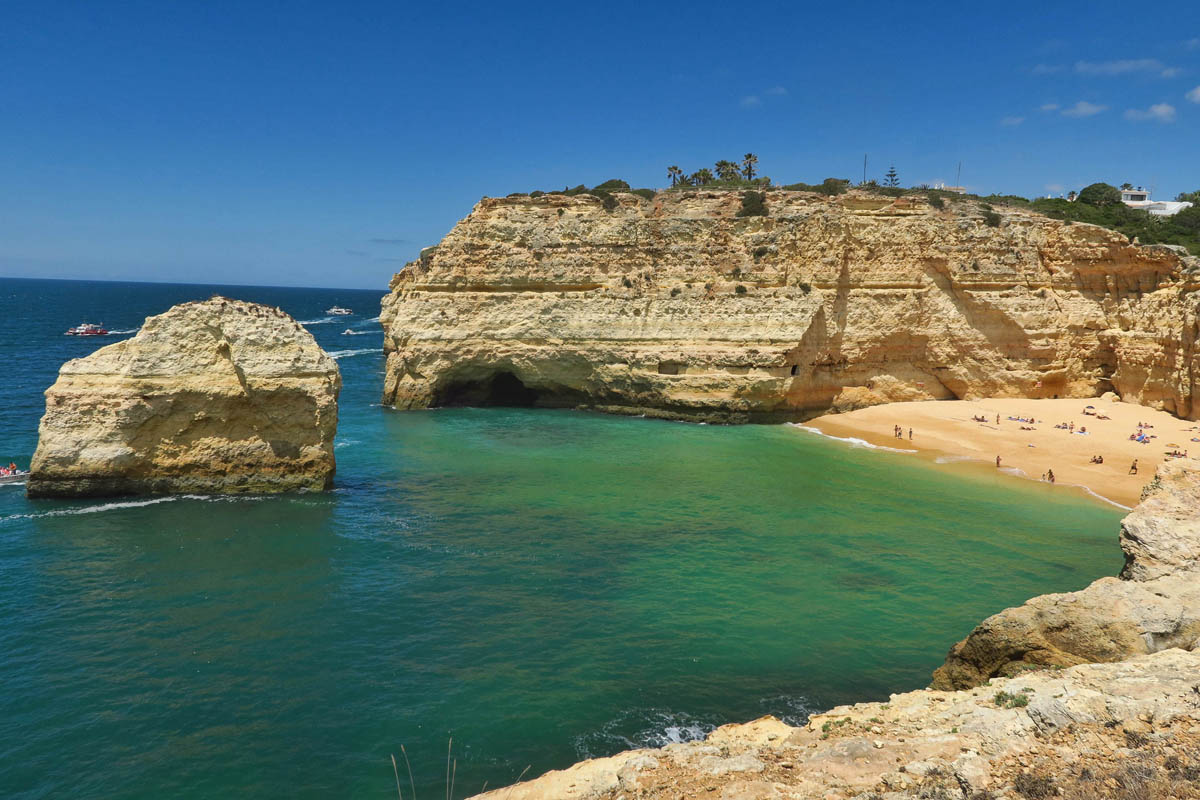 The trail passes so many beaches, I lose count. 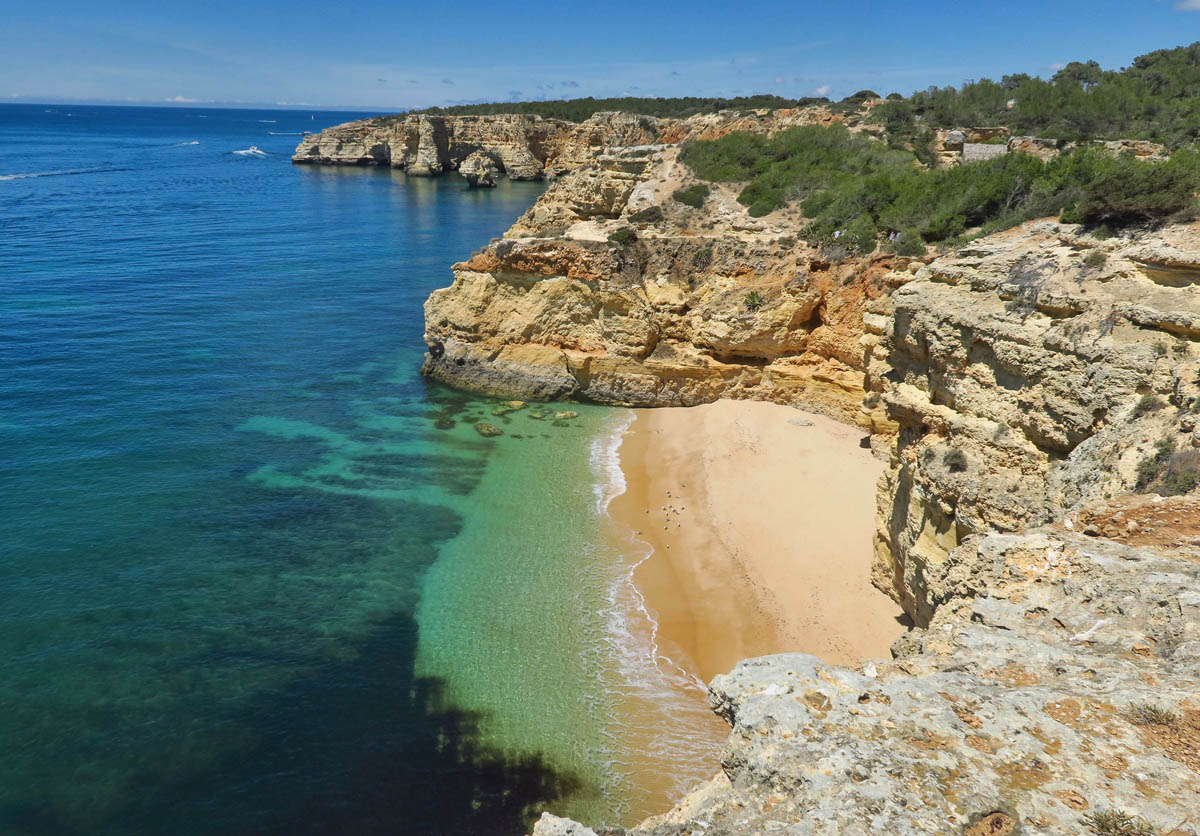 From a distance, I wonder how this one could be so deserted. 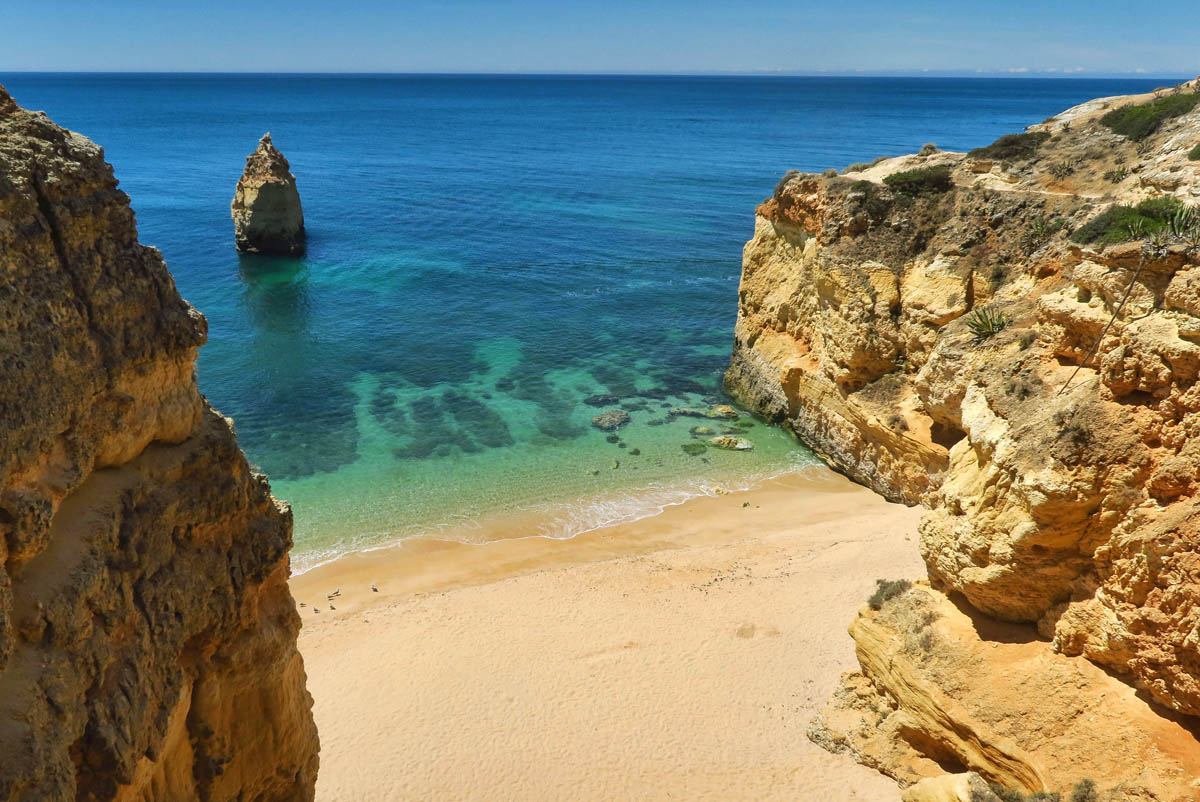 The official trail is a little less than seven miles round trip. However, this is another one of those places where you really need a car, as there is no bus service to the official starting point. In order to reach the trailhead, I will need to start in the town of Carvoeiro, a couple of miles before the trail begins, which means hiking the Algar Seco boardwalks and connecting via a stretch of road, which will add another couple of miles to my hike. But accessing by bus also means I can do the hike one way.

The only bus service along this part of the coast is to the midway point, Benagil, and to the furthest most beach, Praia Marinha. But the first bus of the morning doesn’t arrive until 10:00am, and the last bus of the day leaves at 2:30pm. While I could likely make it with no problem, should I miss that last 2:30pm bus, I must hike the entire route back to Carvoeiro in time to make the 5:30pm bus back to Lagos. This would leave me little margin for error in being stranded without a way back to Lagos. That also doesn’t leave me much time for my usual lollygagging, enjoying the scenery, taking lots of photos, and hopefully stopping for a swim at Praia Marinha, reported to be the most beautiful beach in the Algarve. So I decide to hike the trail over two days. I will start at Carvoeiro and hike to Benagil on the first leg. Then return another day to Benagil, picking up where I left off in time to catch the last bus out of Praia Marinha at 2:30pm.

Breaking the hike over two days means I will only walk around three miles each day. However, due to the “hanging valleys” and beach visits along the way, it’s a constant up and down over rugged terrain. So I am grateful not to have to rush, as the midday heat is intense, and the terrain is a knee buster. 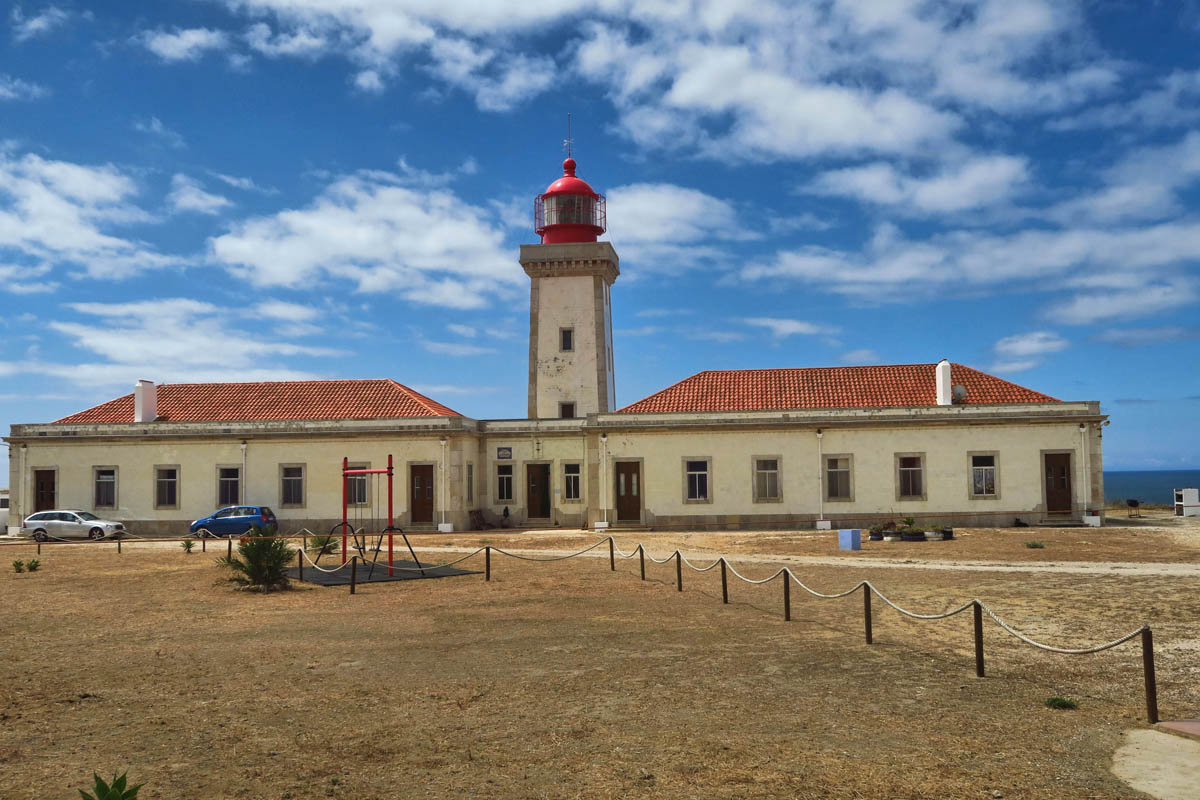 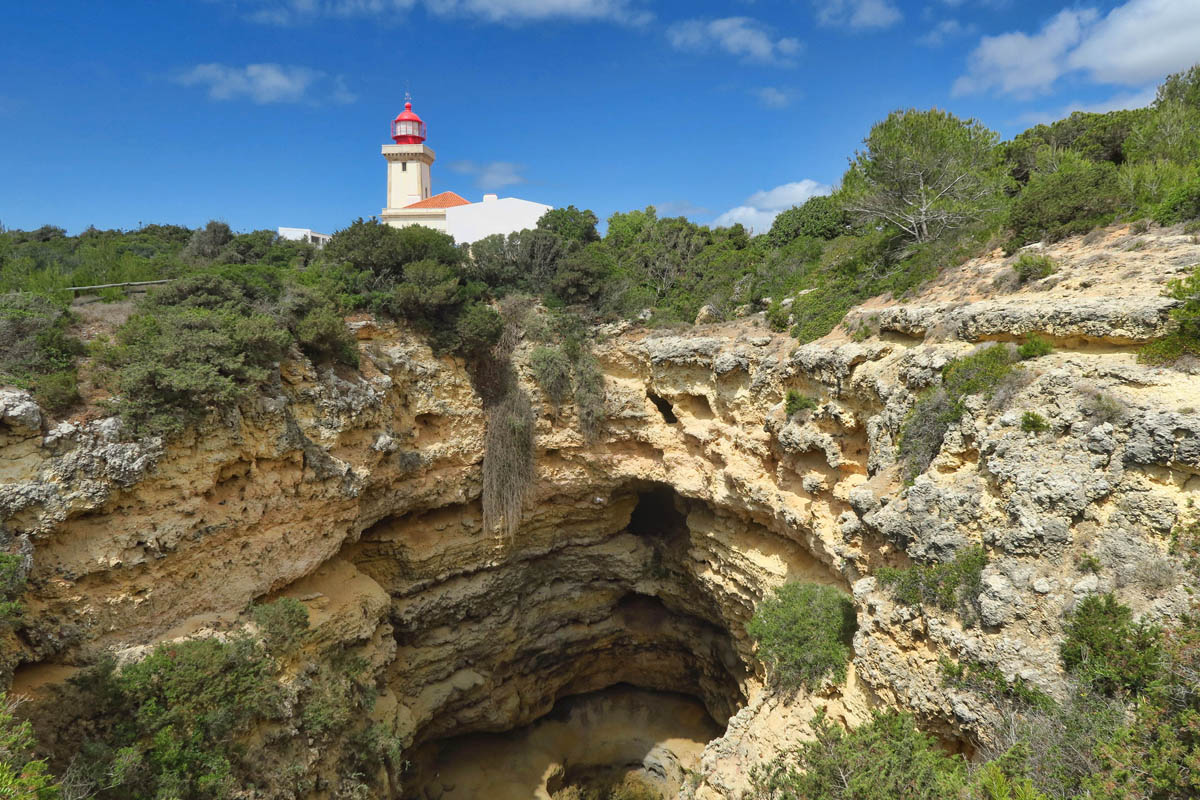 The Farol de Alfanzina or Alfanzina lightouse was built in 1919. Due to the isolaton only changed by tourism, the lighthouse operated in isolation from the main network until 1980 when the coastal road was completed. 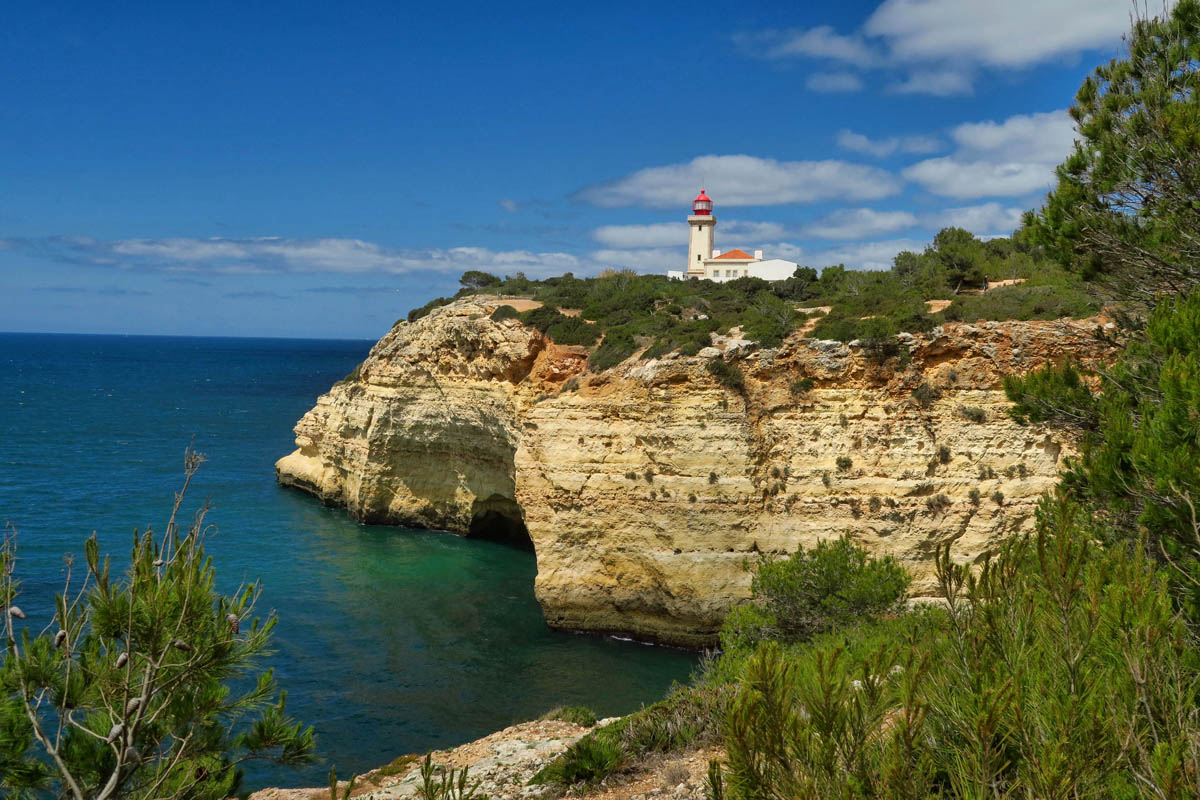 While the Alfarina Lighthouse is 75 ft tall, it stands 130 ft above sea level due to cliff height. 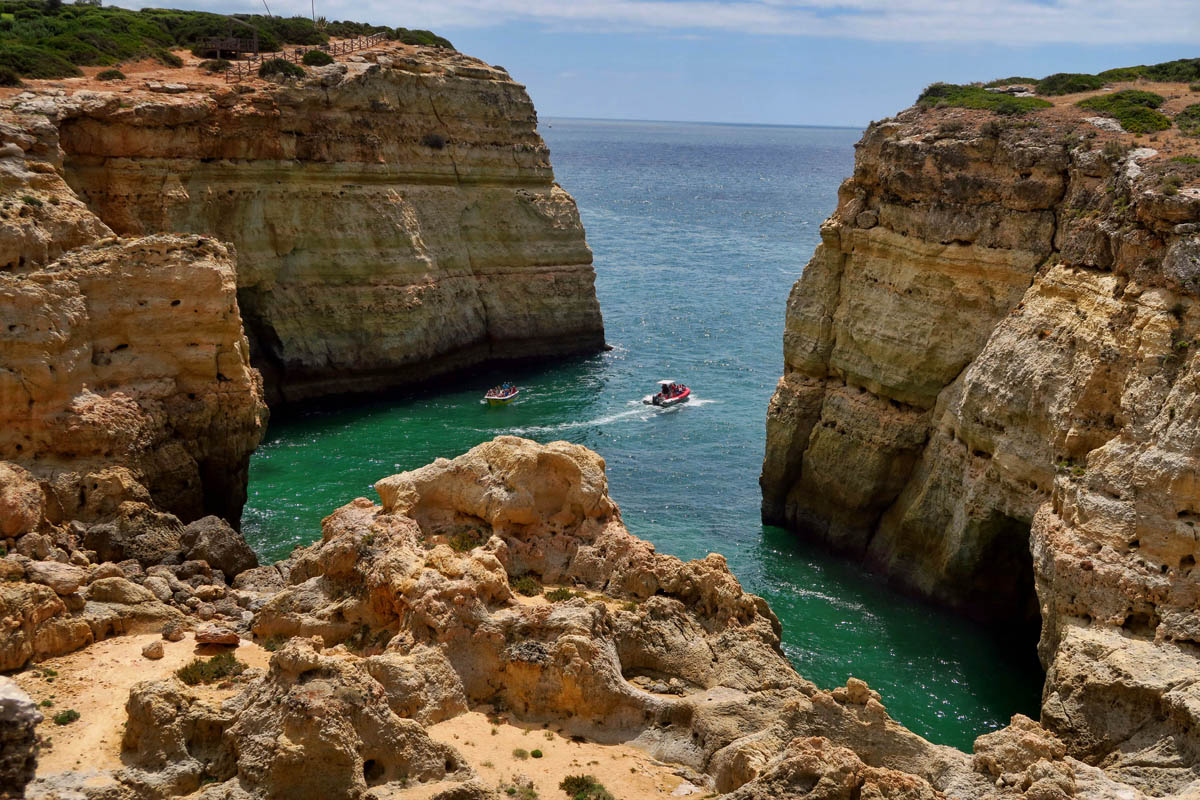 As it becomes later in the morning, the boat activity increases in the area. 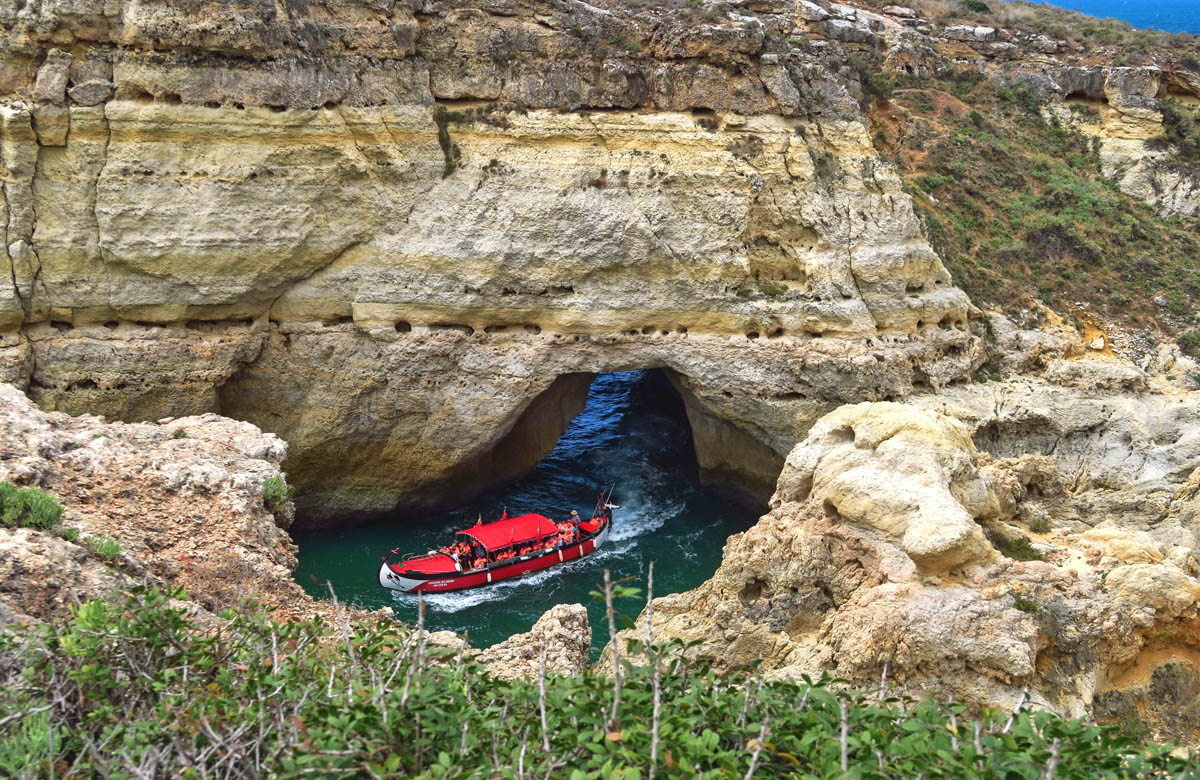 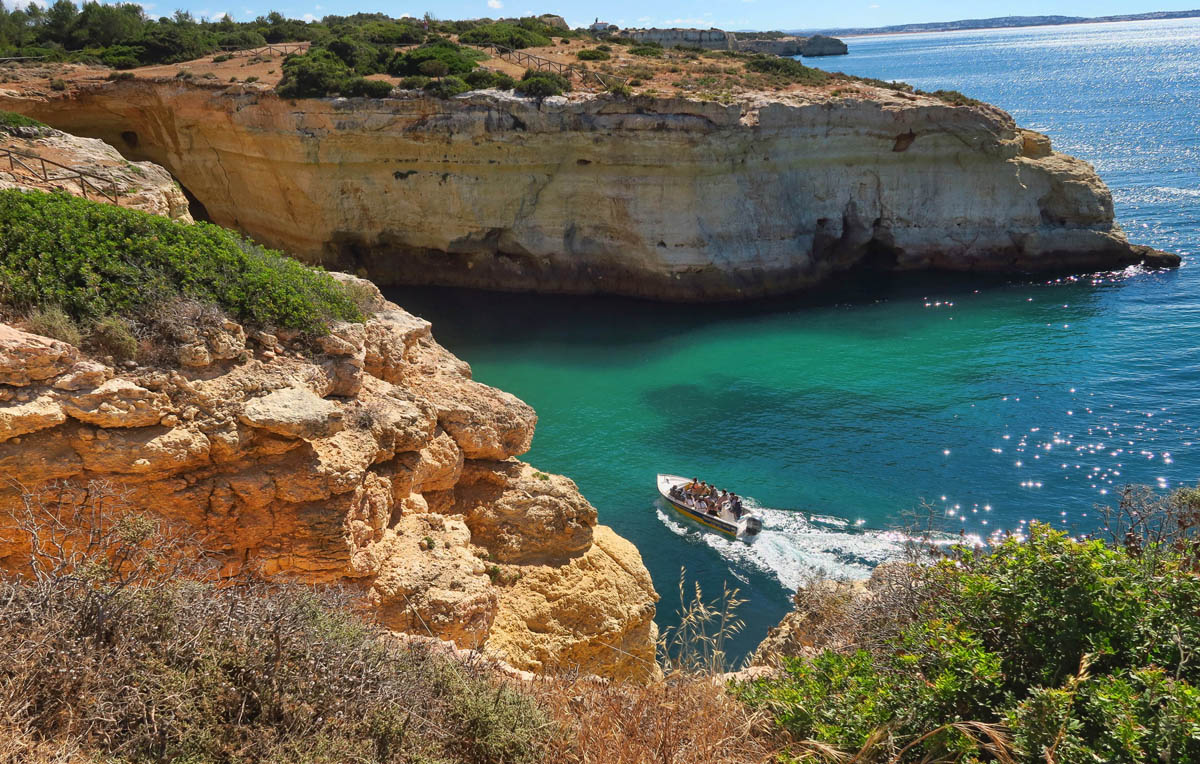 These boats visit caves along the shoreline, including the Benagil Cave I visited a few days prior. 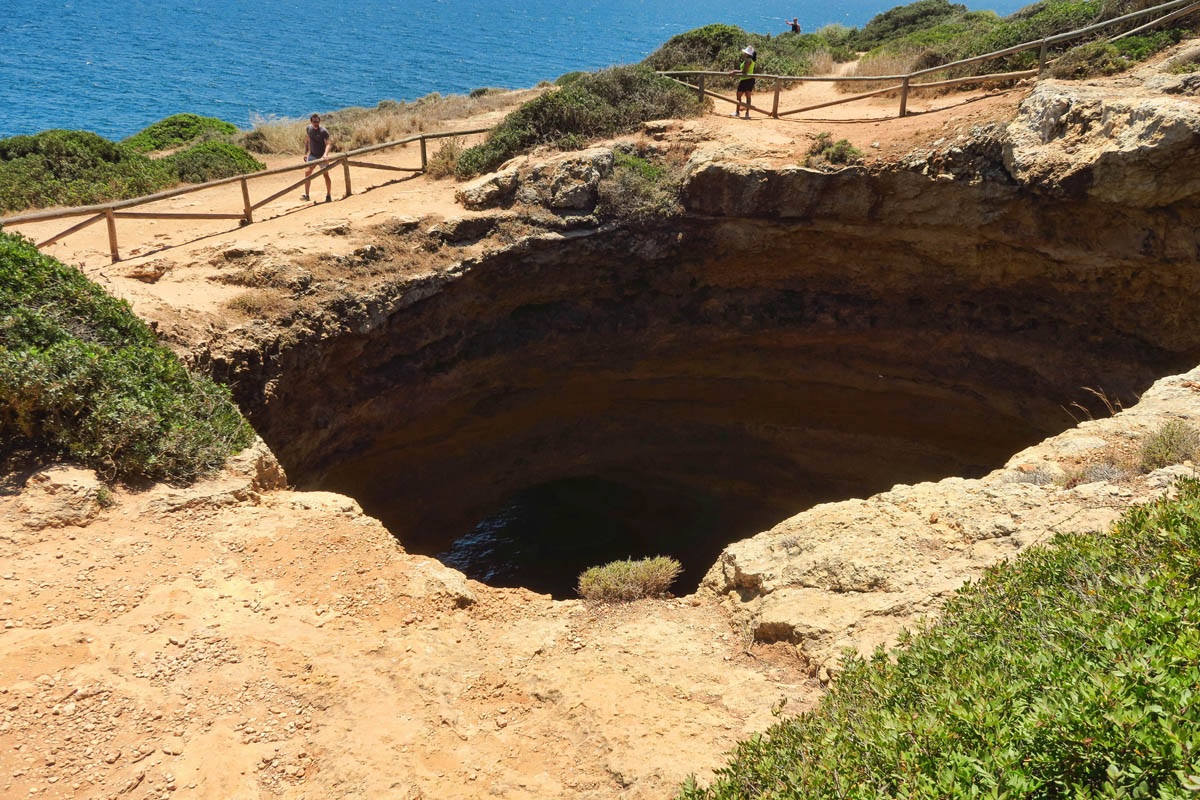 My “Lagos: Two if by Sea” post included a boat trip to Benagil Cave. This is the view of the cave from above ground. It started out as a sink hole. 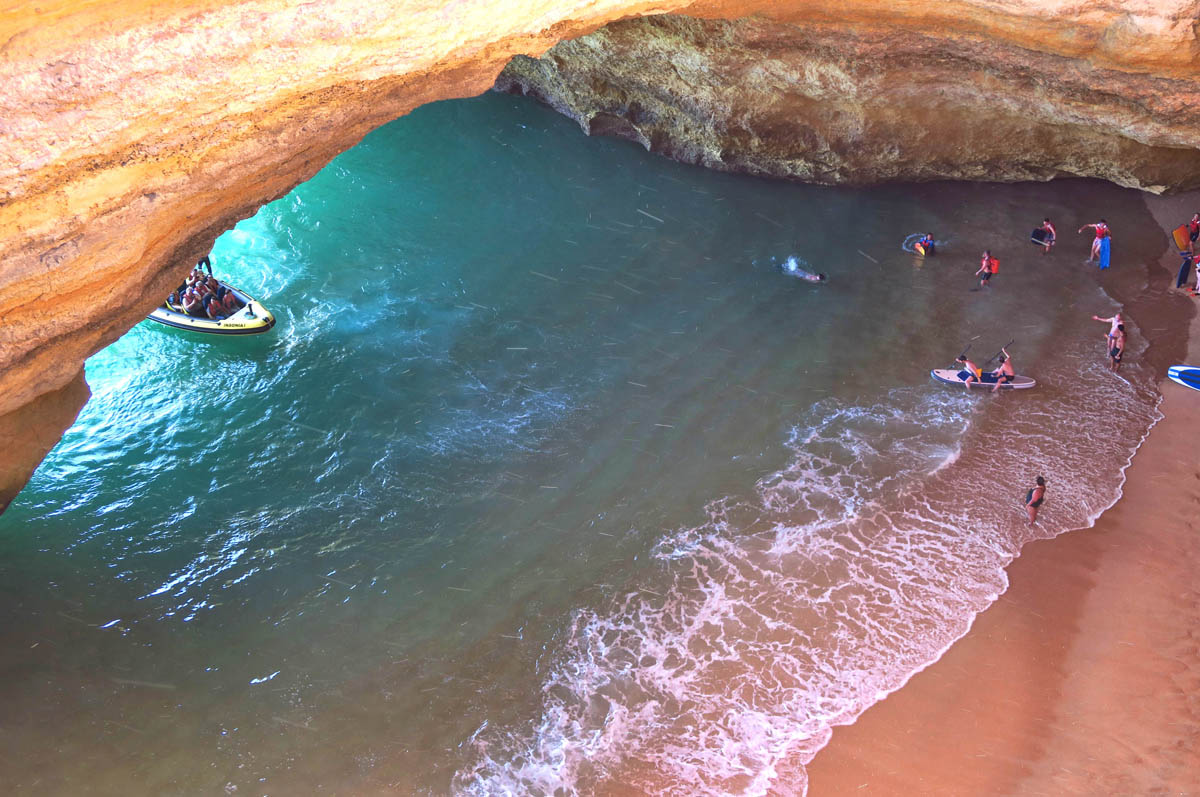 Looking down into the cave from the edge of the sink hole, you can see paddle-boarders and a boat entering the cave. 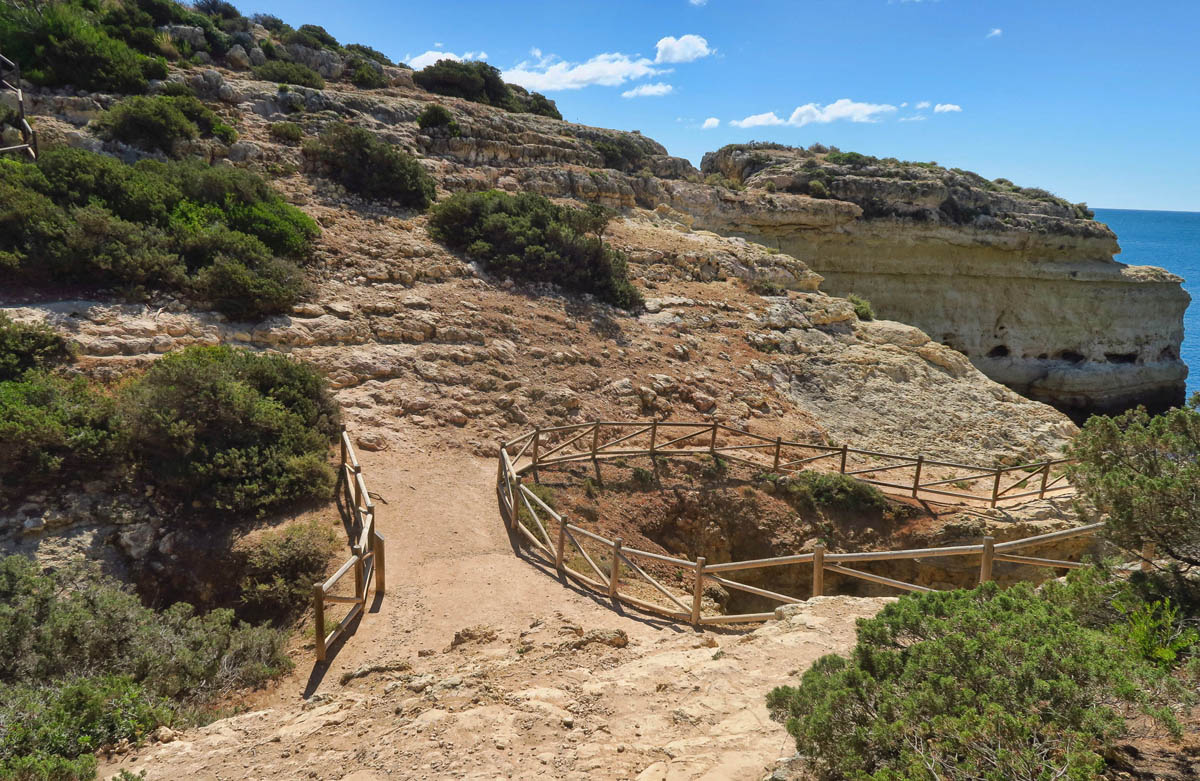 Sink holes are prolific along the hike. Thankfully always fenced off. 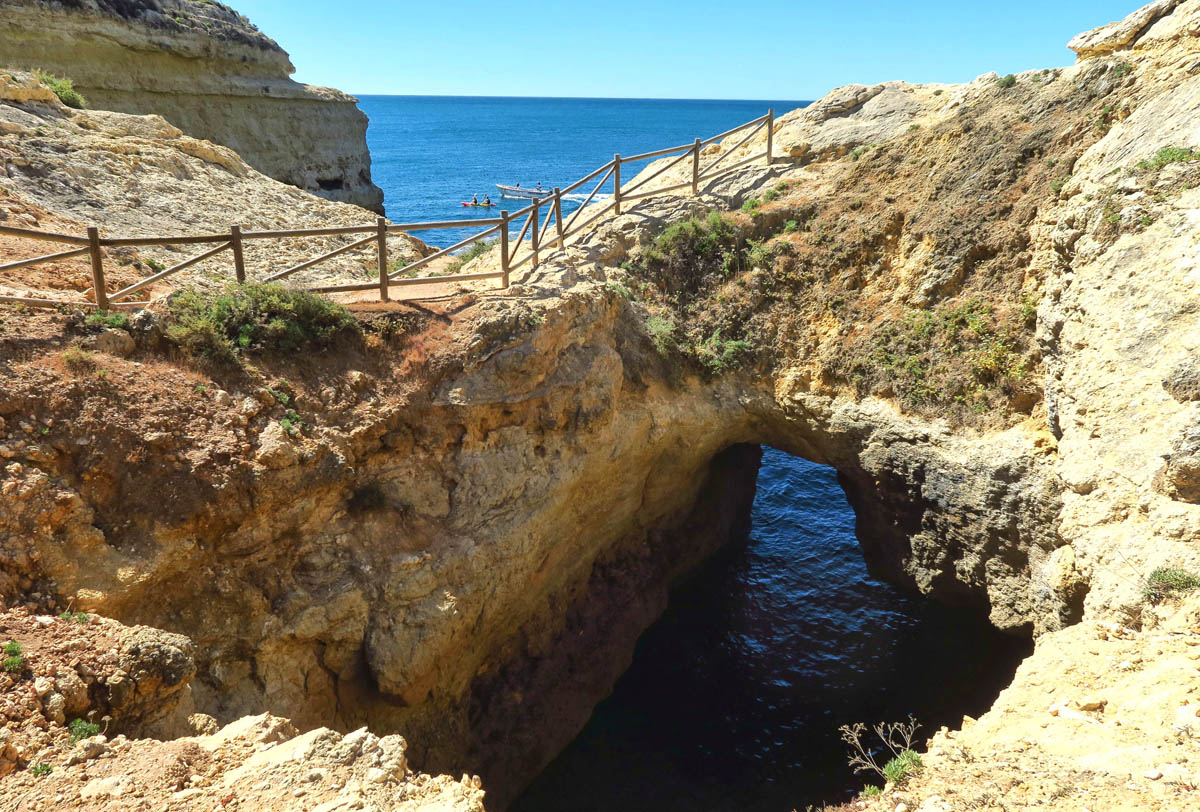 By breaking the hike up into two days, that also means I will have time to inch my way into the icy cold Atlantic waters for a swim. I’ve been trying for days to “gut up” and swim at the beach in Lagos, but I just haven’t been able to do it. The water is bracing, and the wind makes getting wet unpleasant. And while I have made it up to thigh-level, my personal rule says “a swim” only counts when head is submerged and feet leave the ocean floor.

On the second leg of the hike, I reach Praia Marinha around noon, leaving me two and a half hours to kill before the last bus at 2:30pm. It will take me that long to finally work up the guts to get in the water. It’s a perfect day, the warm sunlight shimmering on the calm, aquamarine water. I can’t remember a time when a body of water seemed more inviting. But one by one, I watch as people inch toward the waterline, fold their arms while doing a little shiver, then run back to their beach blankets to warm in the sun.

But it’s “do or die” for me as I know I won’t likely encounter a cove this protected from the wind again. I also know there will be no “inching in” or I won’t be able to do it. So with one deep breath and the determination not to stop until my feet leave the ocean floor, and though I come up gasping in shock, I am in!

What a glorious reward at the end of a stunning hike! 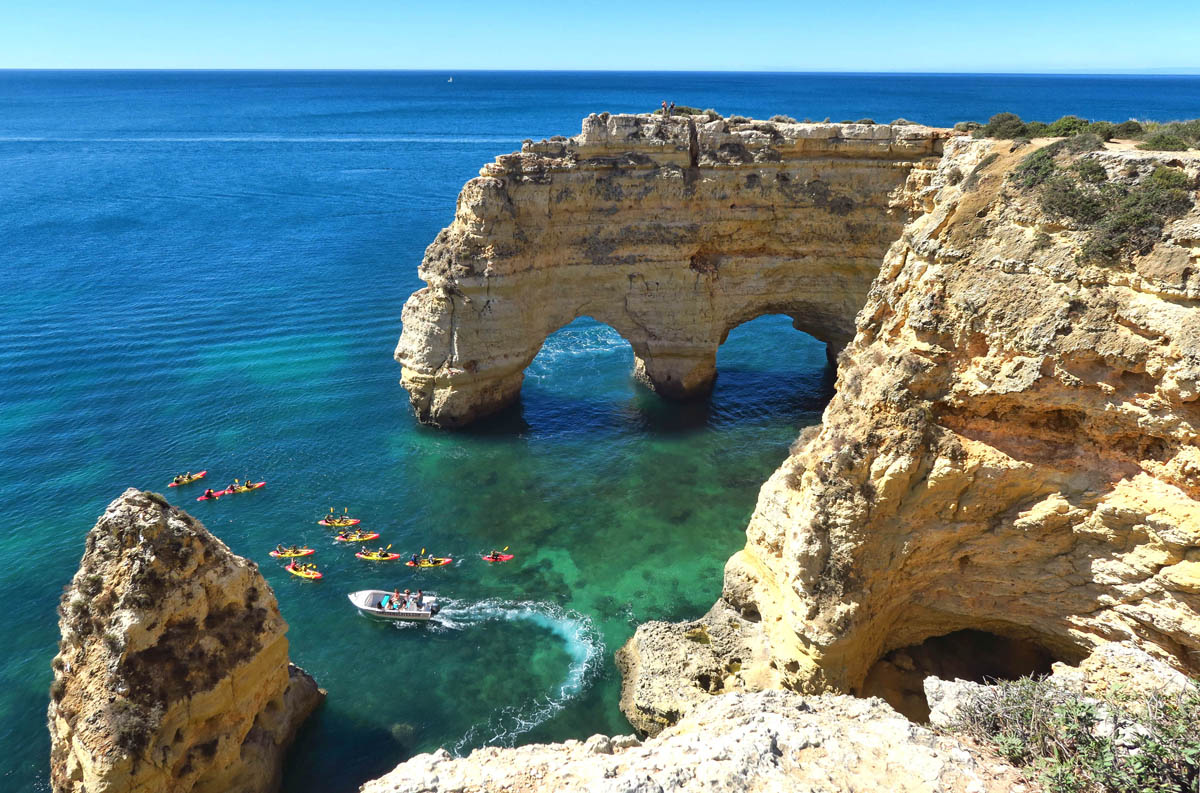 When I see the double arches, I know I have reached the famous Praia Marinha. 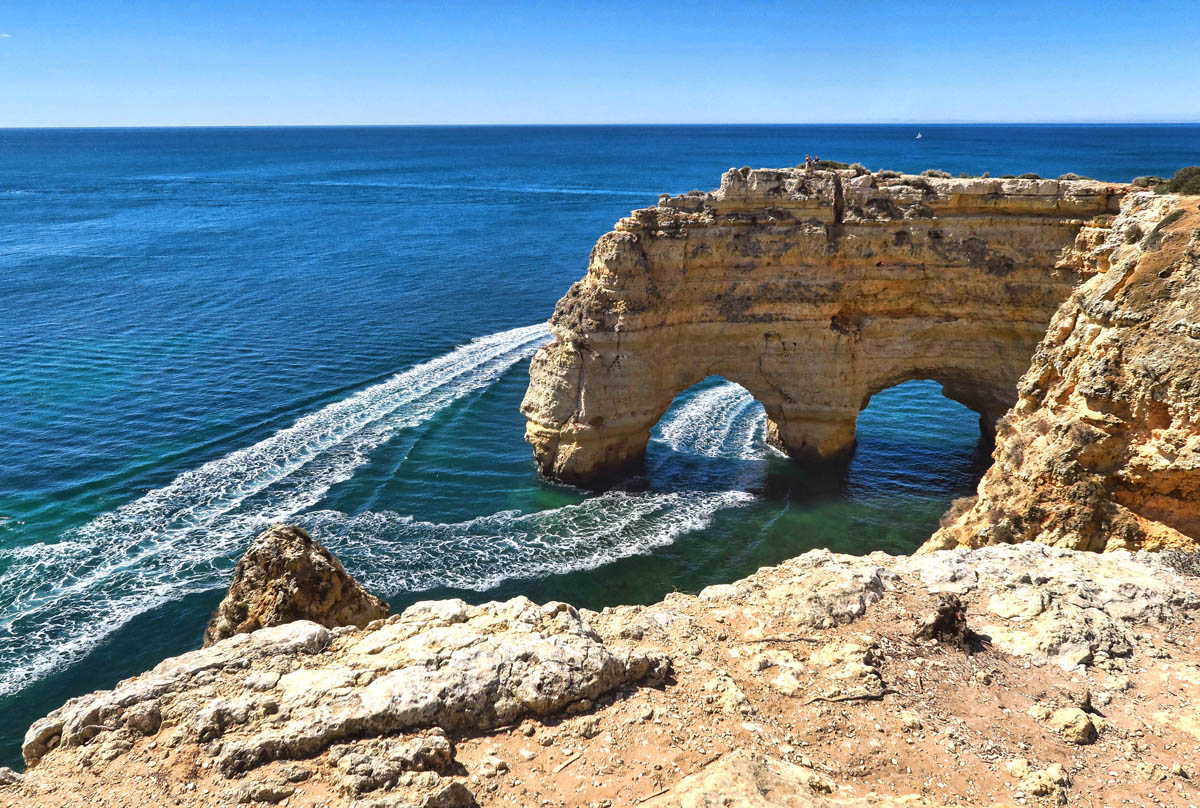 I was too slow with the camera to catch anything but the wake of these two hot rod boats swinging into action. 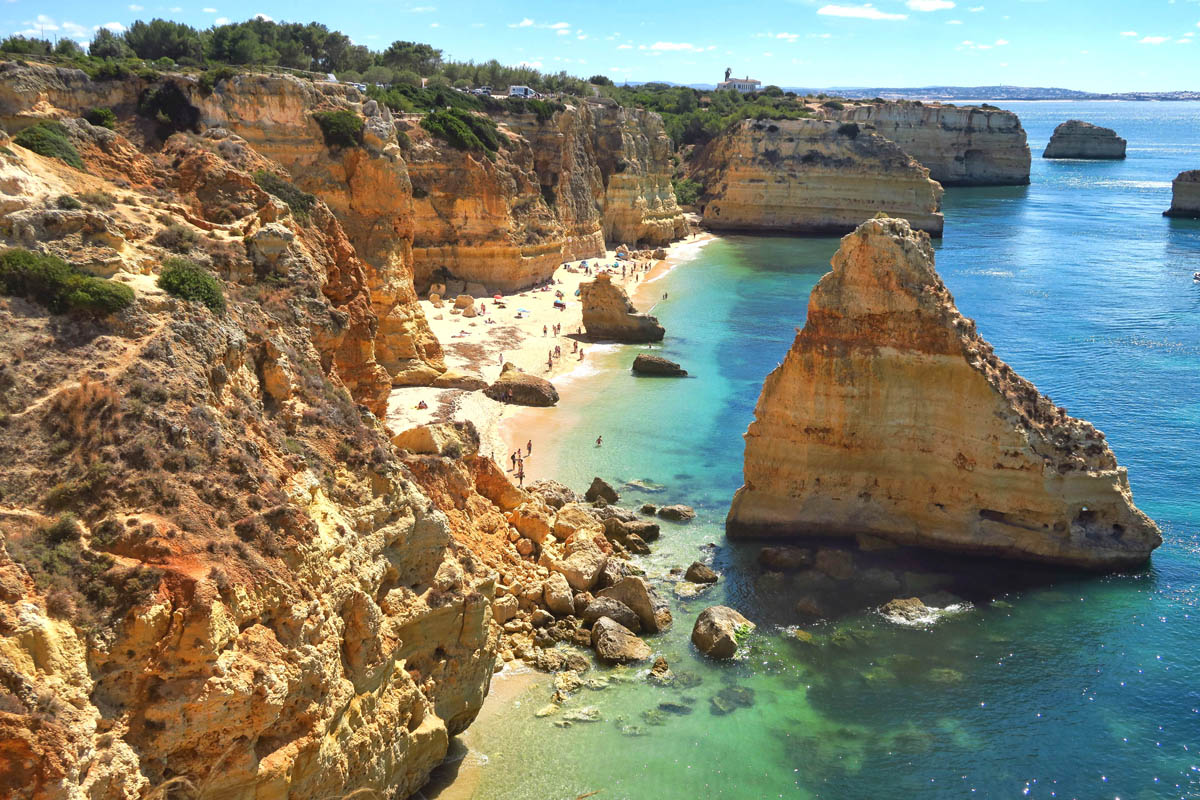 Praia Marinha is a beautiful beach that lives up to the hype. 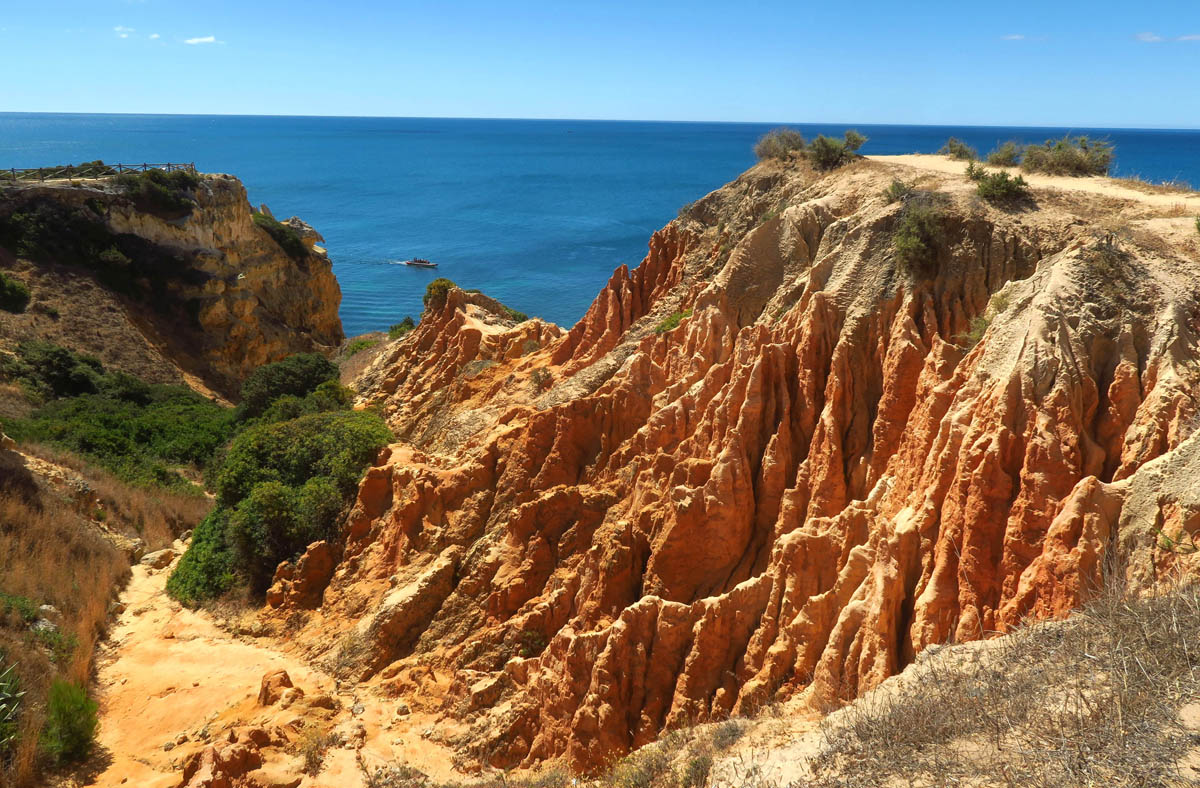 Getting down to the beach, it looks a bit like one of my other favorite oceanside hikes, Torrey Pines. 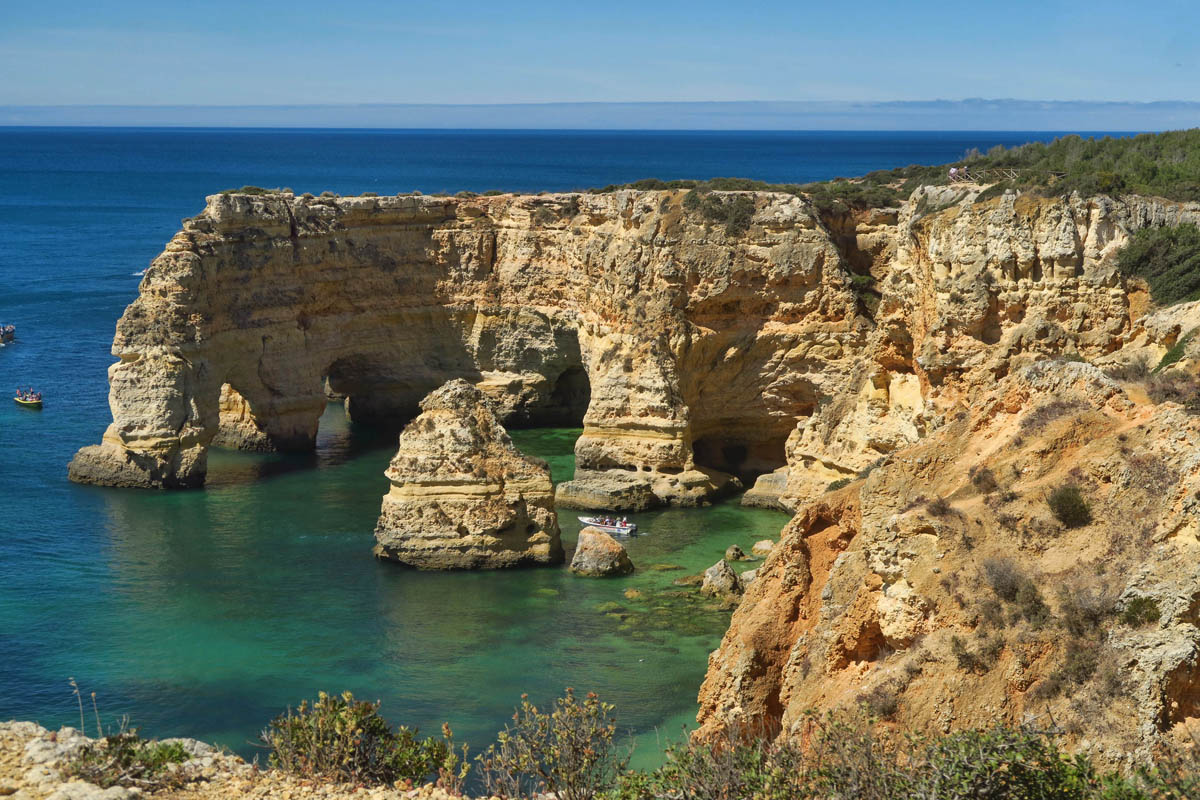 Looking back at the formation that makes up the double arches. 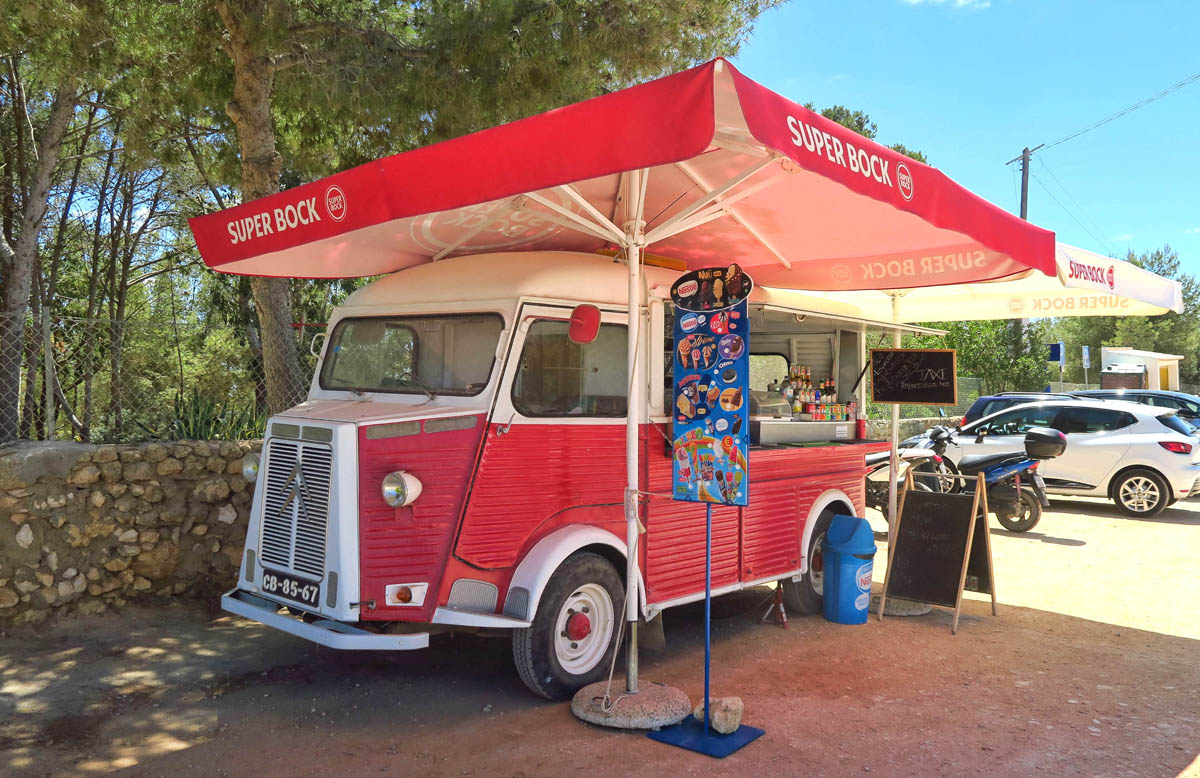 This vendor tells me the orange that I buy from him will be the best I ever tasted, and he is right! 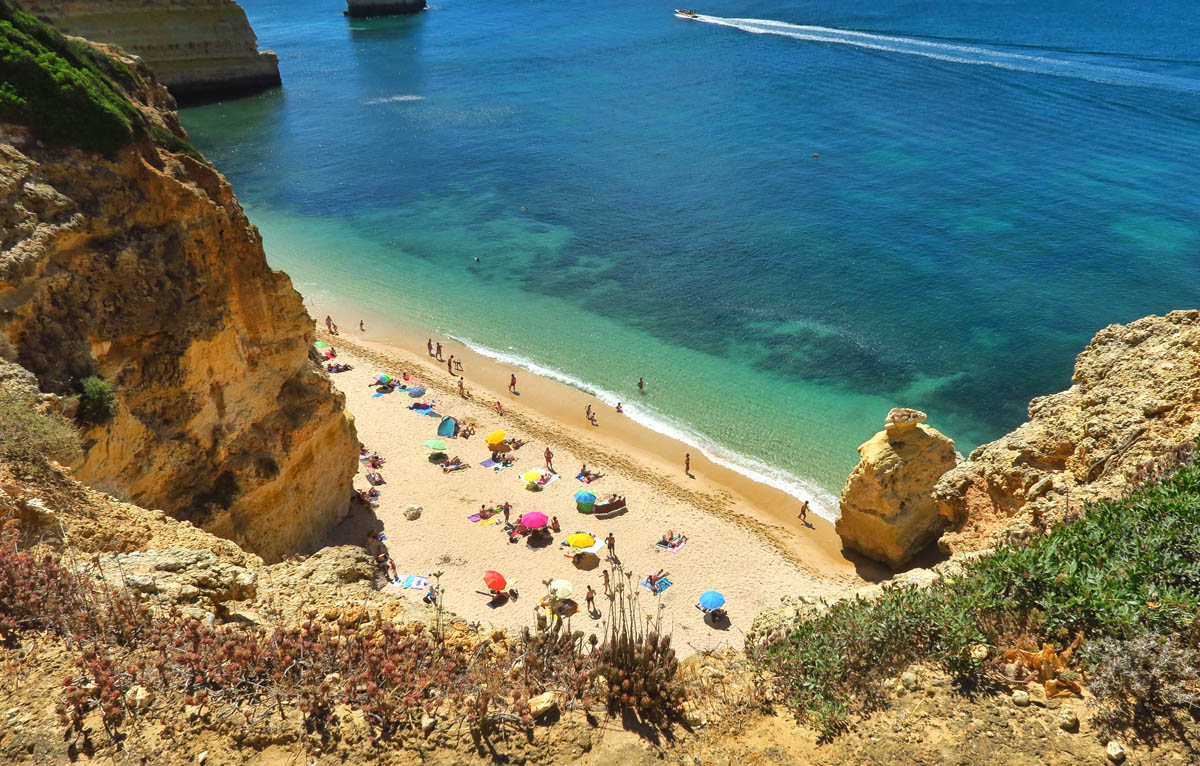 It’s a lot of stairs to get down there, but worth it! 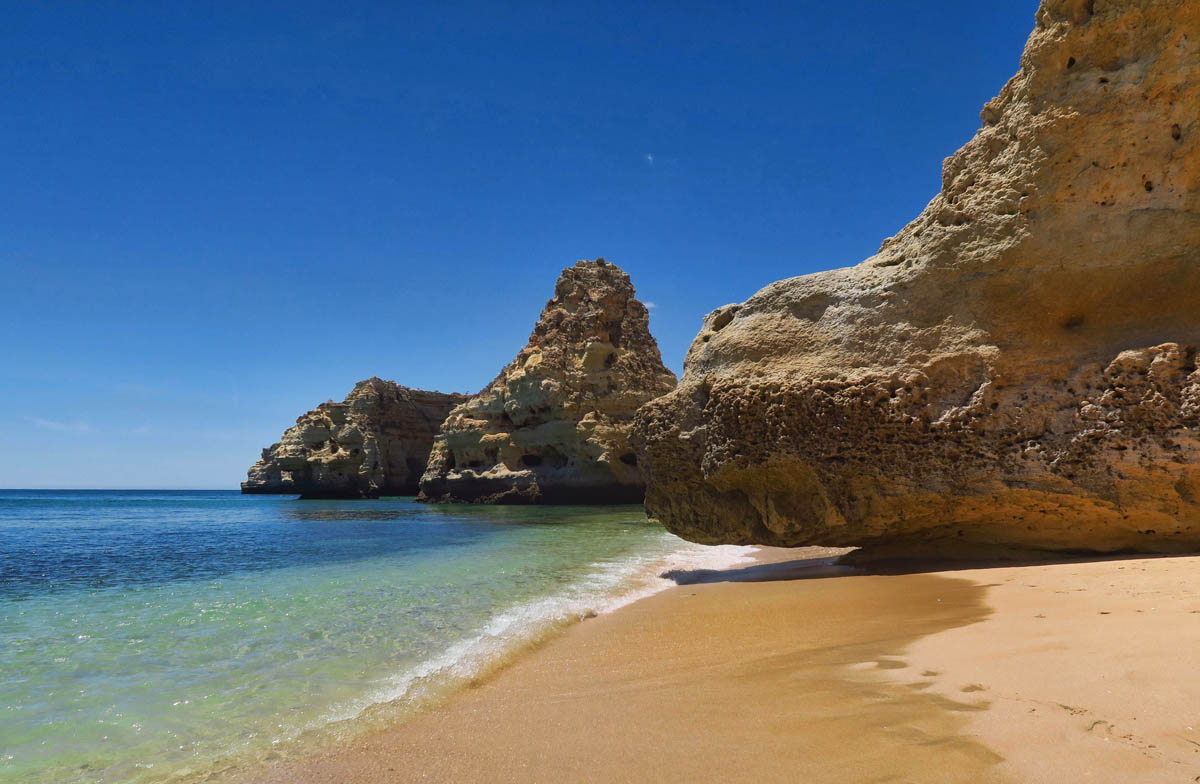