Warning: Political Post Ahead. If that sort of thing offends you, I understand. Either scroll through and just look at the photos and captions of the amazing Catwalk Recreation Area in New Mexico’s Gila Wilderness, or pass altogether. But this is my personal blog, meant to be a personal account of what I am feeling at any given moment. And today, Inauguration Day, January 20th, 2021, as the song goes, “I’m feelin’ good.” 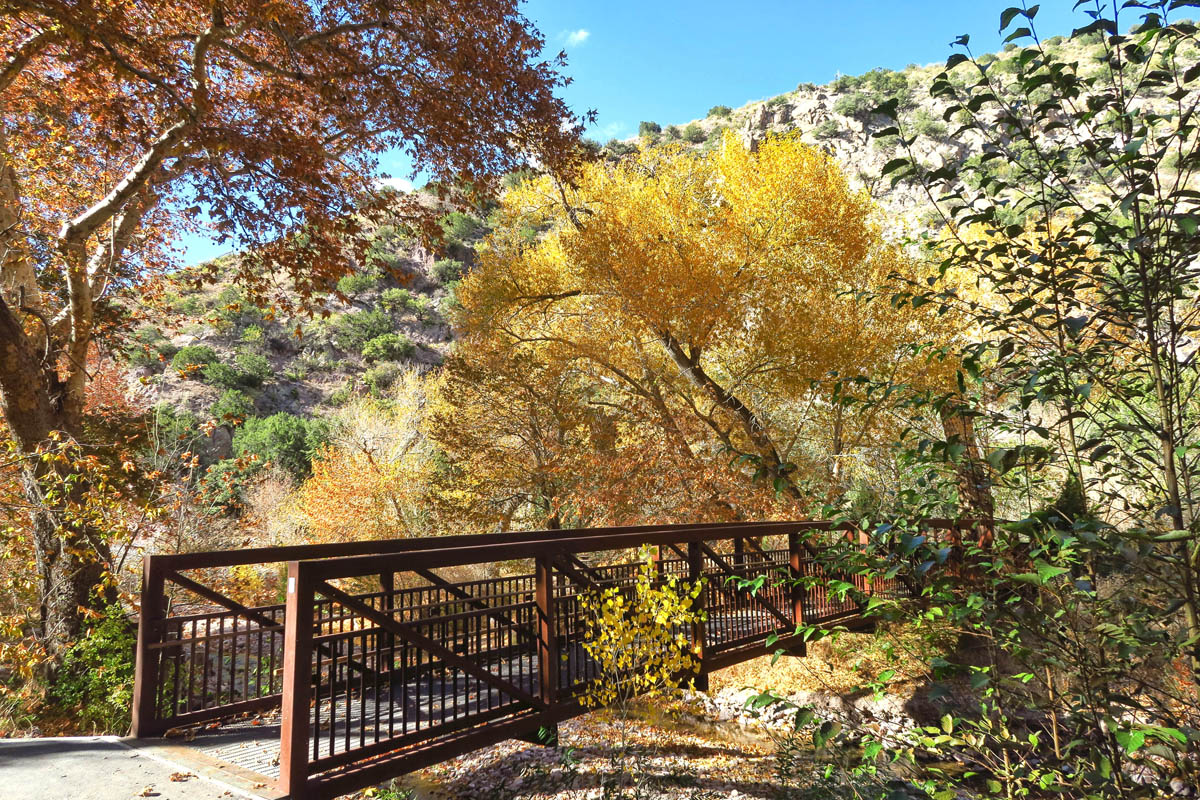 One of my last stops in my counter-clockwise circuit through New Mexico last fall was Catwalk Recreation Area in Whitewater Canyon, located in the Gila Wilderness. 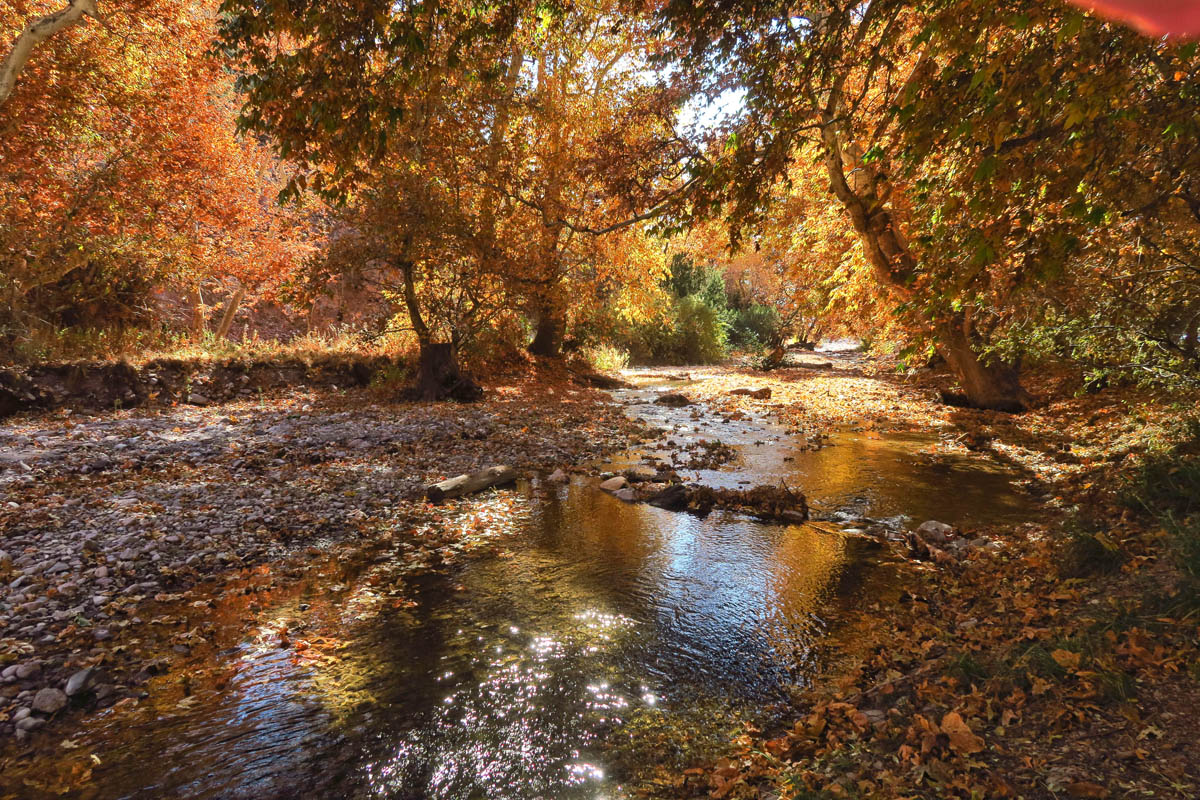 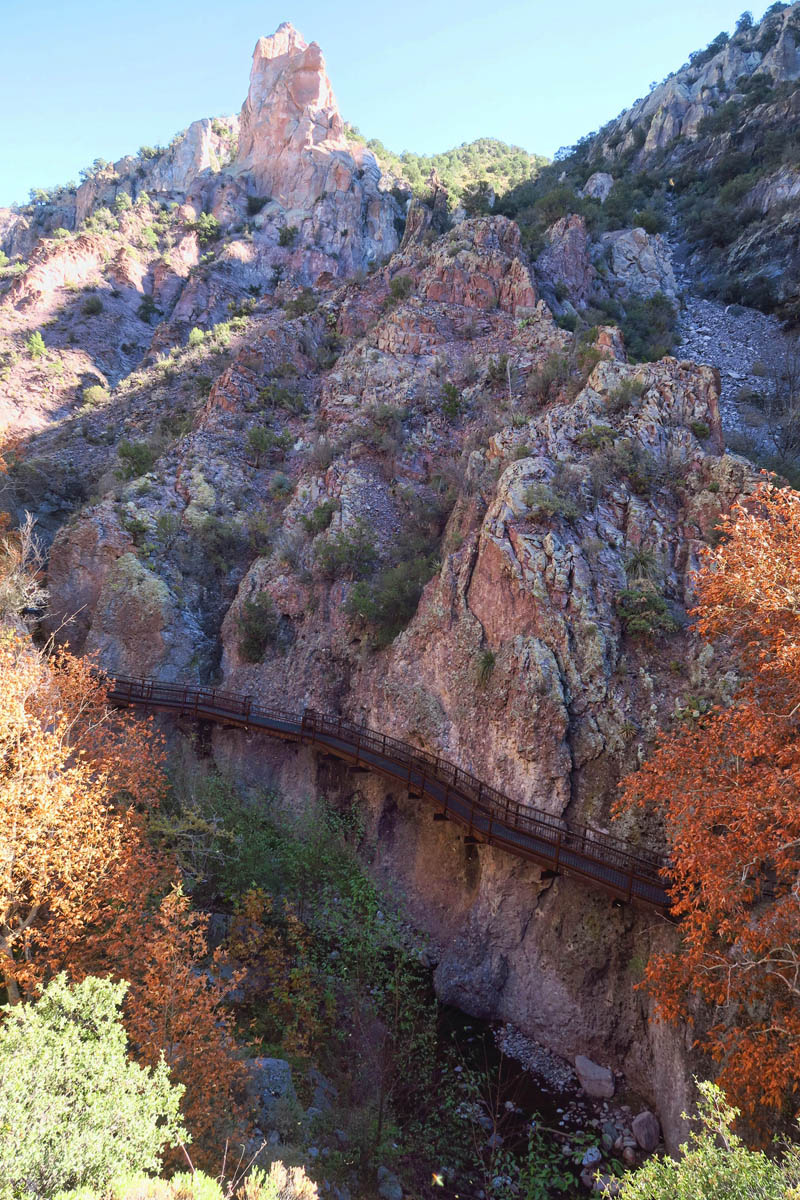 This steel causeway known as “the catwalk” follows two pipelines which supplied water and water power to the old town of Graham where gold and silver were milled in the 1890’s. 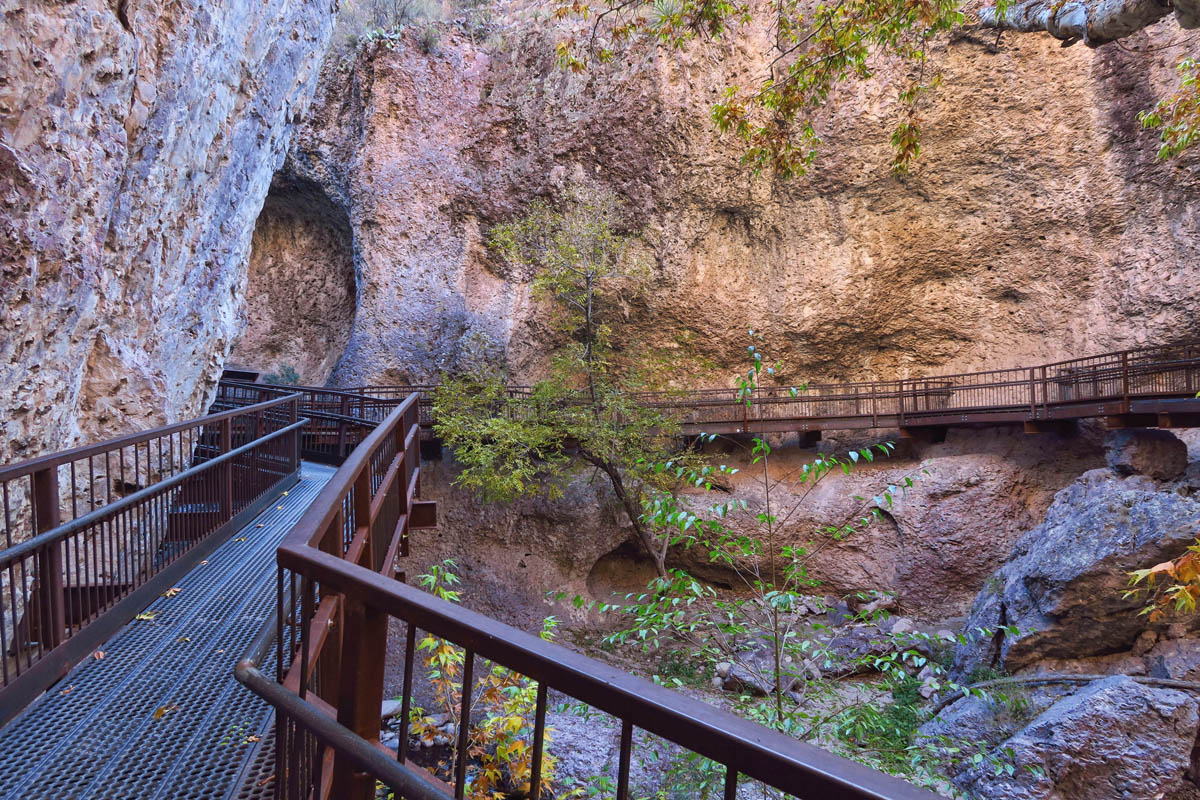 This modern-day catwalk winds through a narrow canyon alongside Whitewater Creek in the Gila National Forest where the original catwalk was once suspended.

I’ve been up since 5:00am today, watching history in the making. It feels like such a promise of hope. While waiting on the “virtual parade,” I have been happily cleaning house. The windows are open, and the birds are chirping. Three little birds. Upon my doorstep. I swept out the Winnie, cleaned the bathroom, and burned a little desert sage I saved back from my last visit in the great Southwest. It feels good to have a clean house. A fresh start.

I knew I had a lot of anxiety surrounding this day, but it wasn’t until the final walk to the White House that I realized just how much. I feel worn out. So much relief after observing four years of abuse, lies, xenophobia, and racist behaviors that have caused me to feel shame for what has become of my own country. Tears throughout the day have felt cathartic. I took live screenshots this morning as he left the White House for what I pray is the last time.

I’ve waited, no, make that “longed” for this day since November 8th, 2016 when I sat up all night in the Watchman Campground in Zion National Park watching the votes come in, nervously counting to 270. And then I cried. Not just for Hillary’s loss, but for the win of a man I knew to be a grifter. A gadfly. A garish egomaniac. But it turned out to be even worse than I could have imagined. 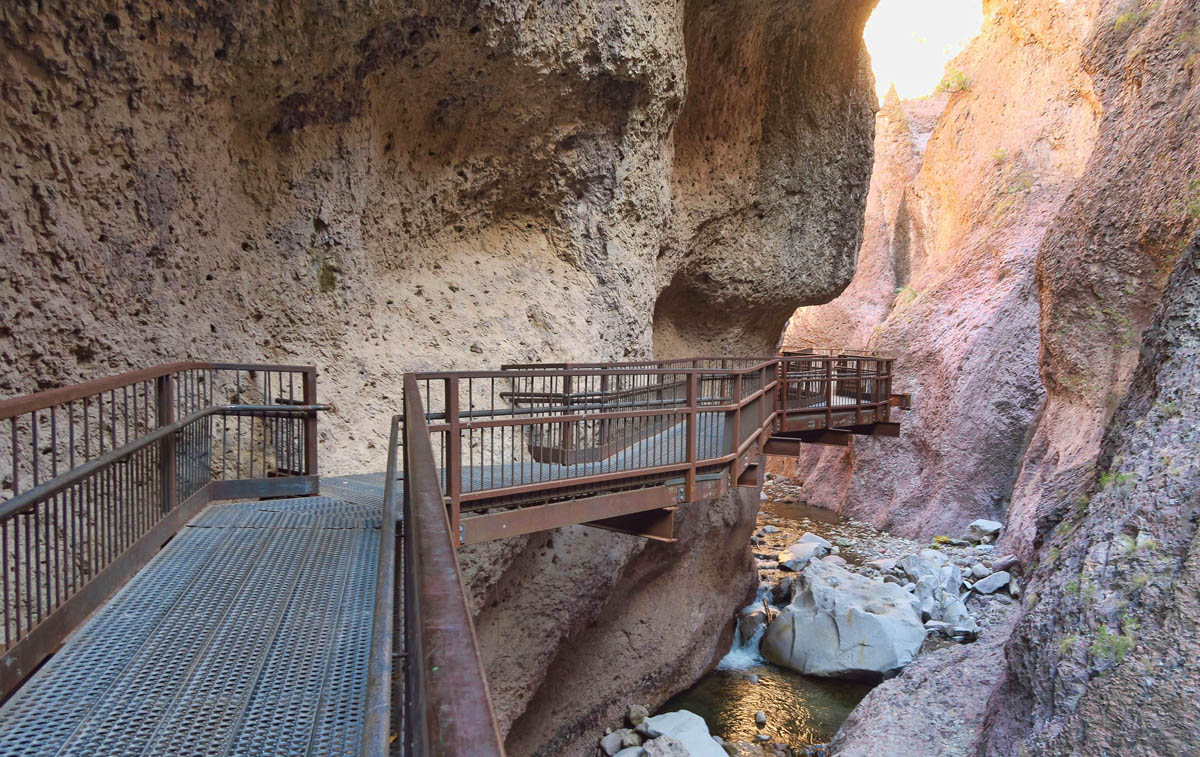 About 1889, gold and silver deposits were discovered in the mountains above Whitewater Canyon. Several mines were developed in the area with ore being hauled in wagons to the small town of Graham located at the mouth of the canyon. 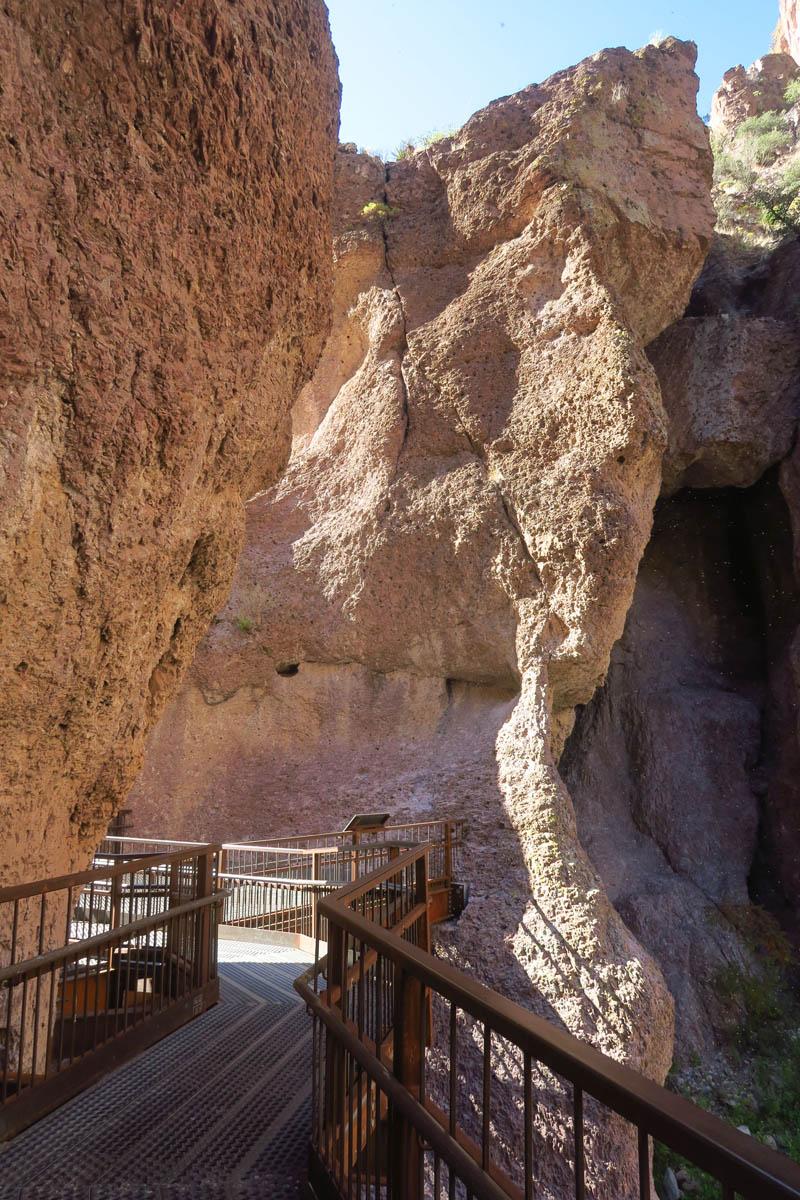 Water required to operate the electric generator at the mill, as well as meet the needs of the 200 townspeople was obtained by constructing a 4 inch pipeline. 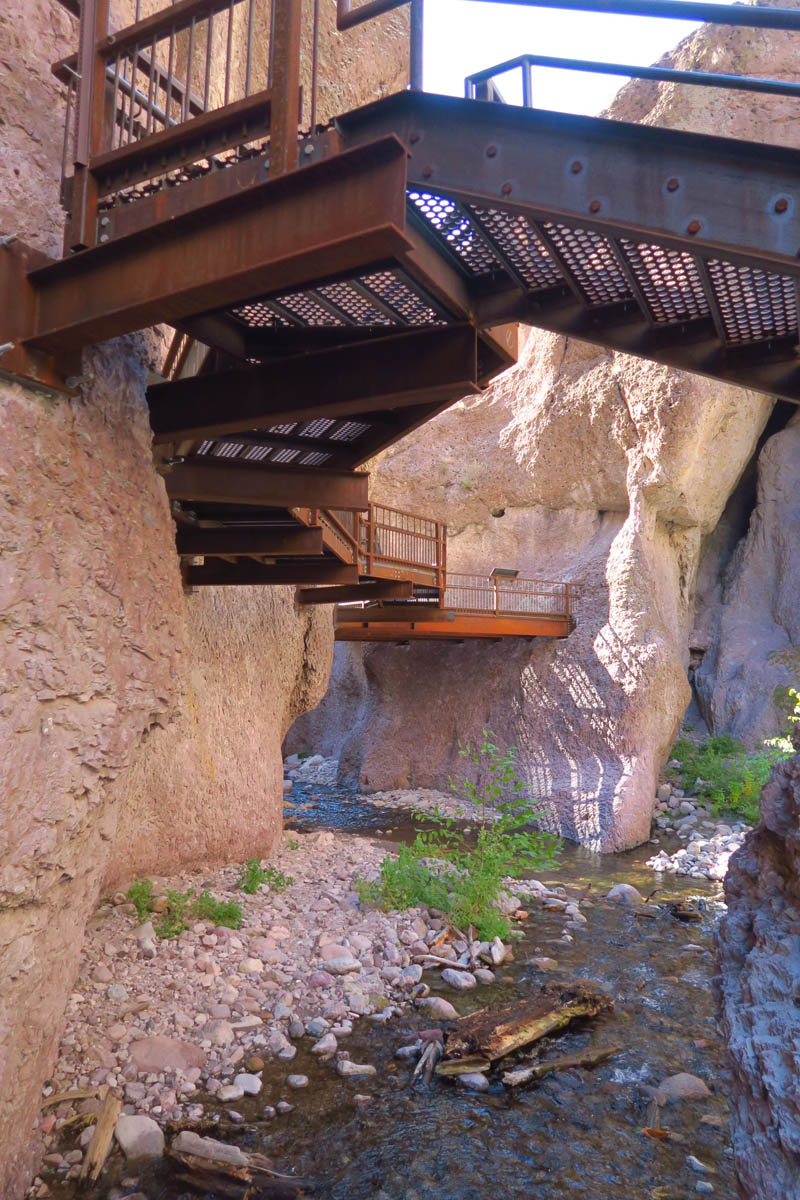 This pipeline reached about 3 miles up the canyon. In 1897, additional water was required, so a larger 18 inch pipe was constructed. 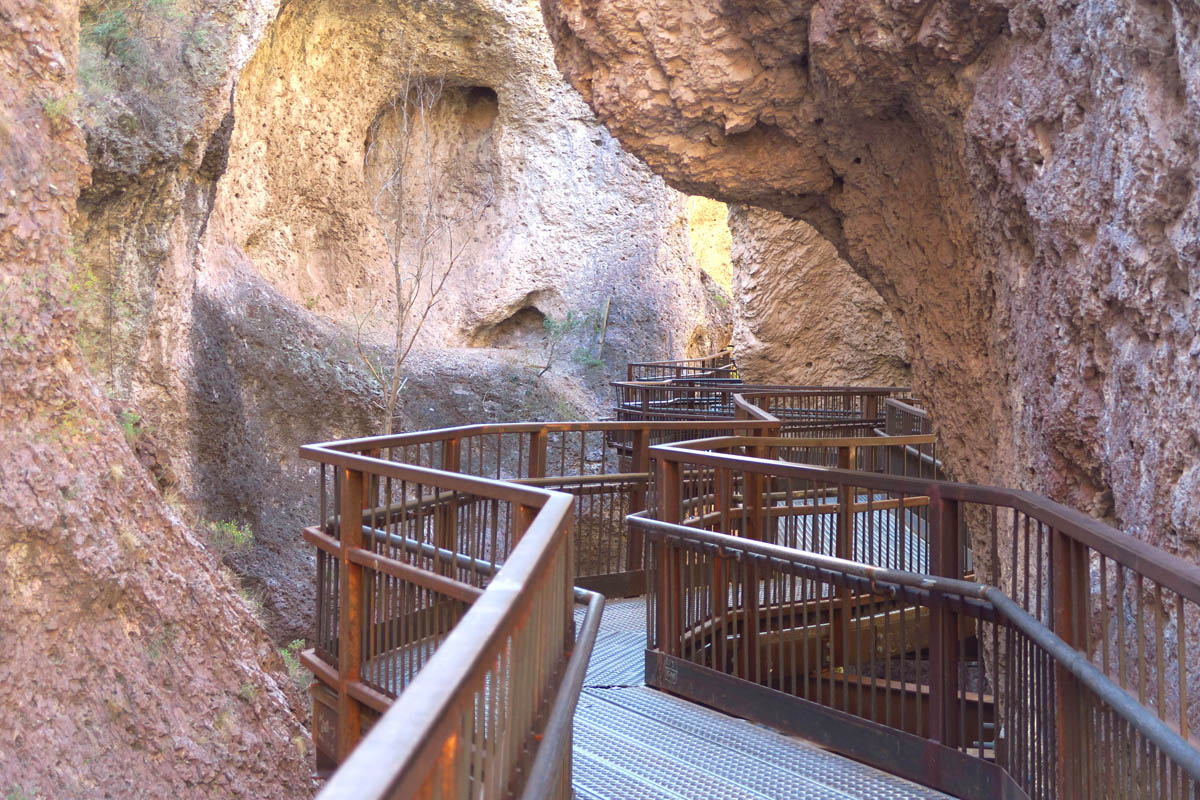 Maintenance workers called the narrow pipeline supports the Catwalk, because walking on the then wooden planks required cat-like balancing skills. 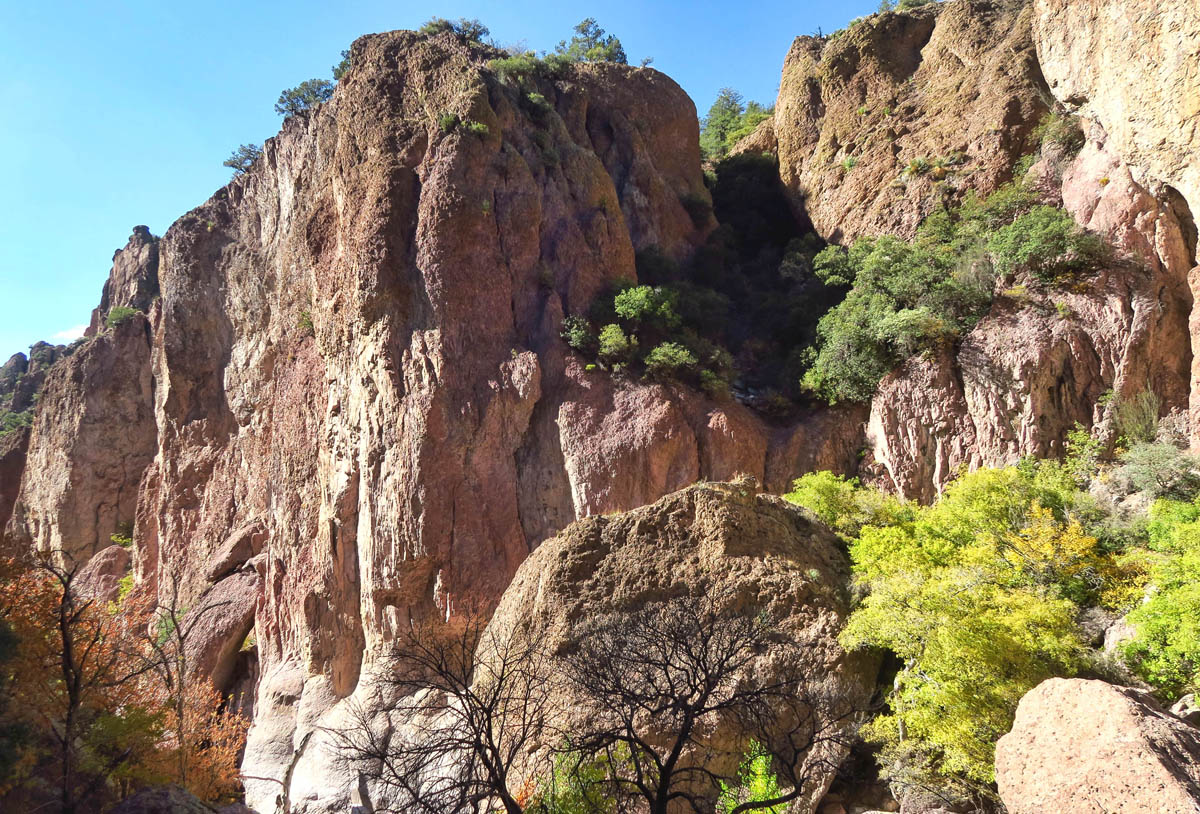 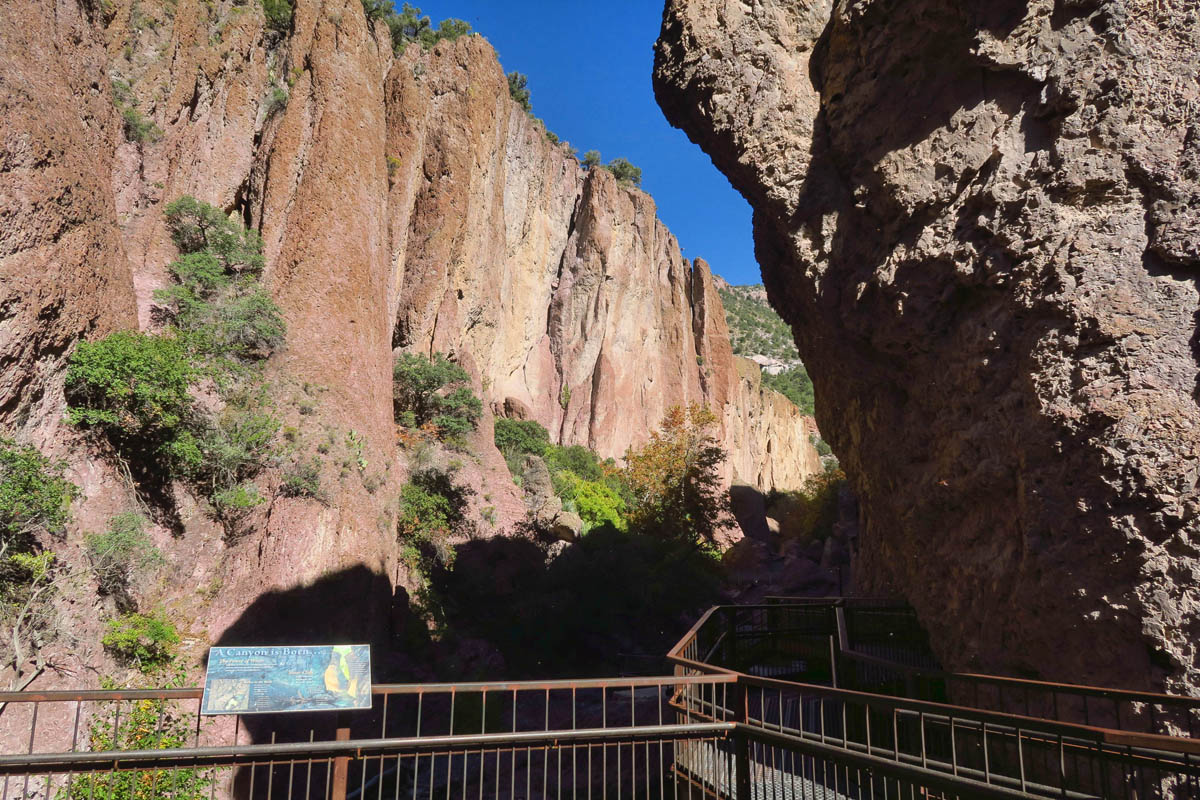 The Catwalk is now a tourist attraction with interpretive placards along the path. 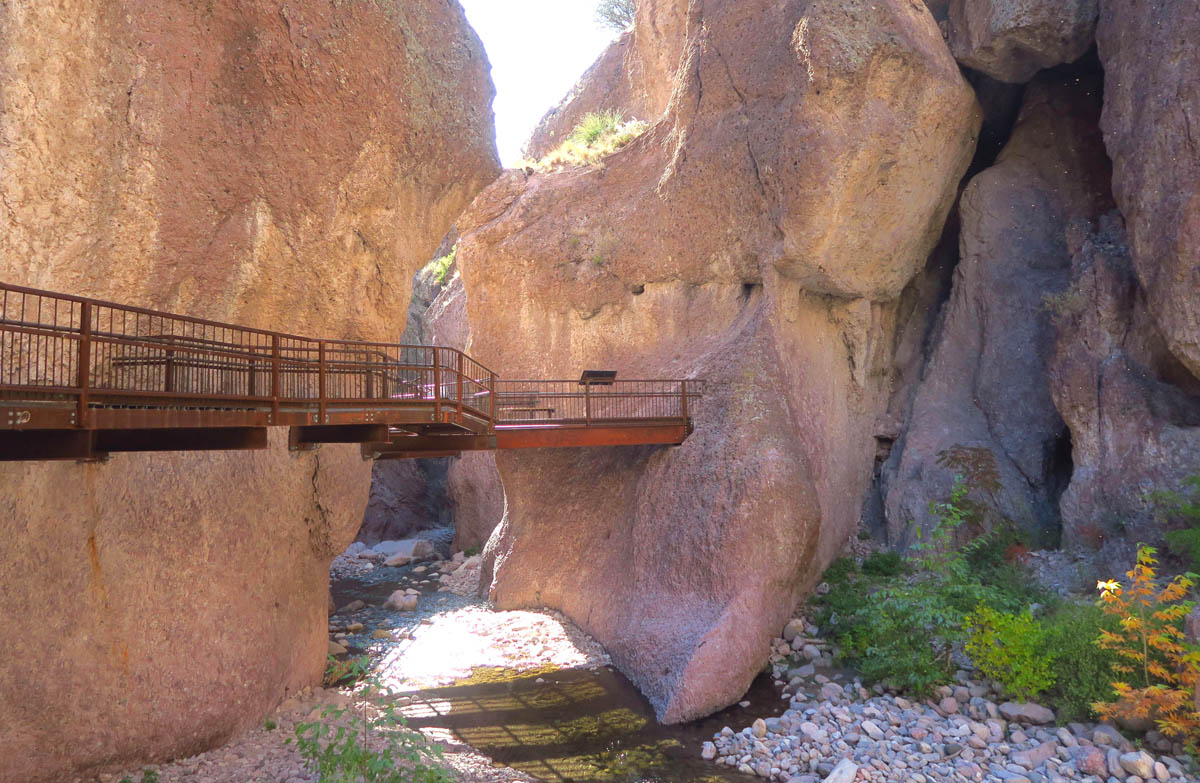 Though the new catwalk now serves a recreational purpose only, timbers, bolts, and cables that supported the pipeline can still be seen hanging from the canyon walls. 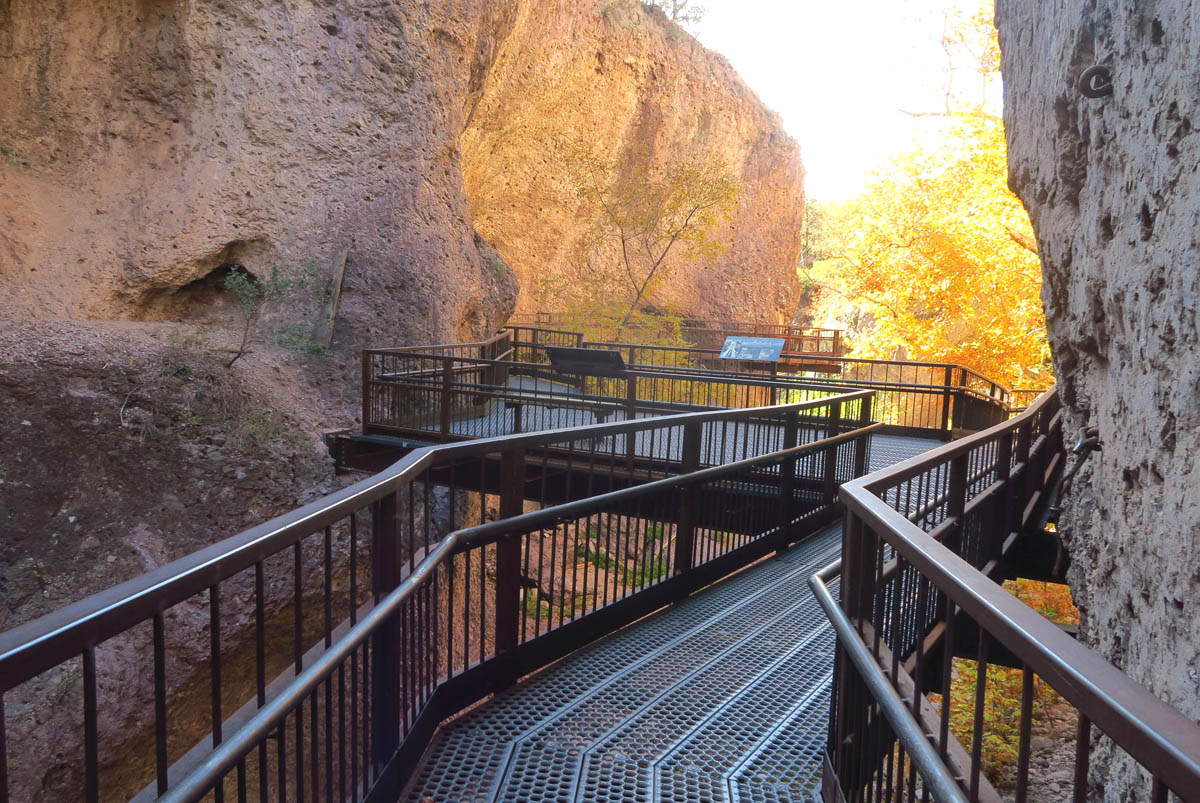 Men from the local Civilian Conservation Corps camp transformed the pipeline into a wooden recreation trail back in the 1930’s. 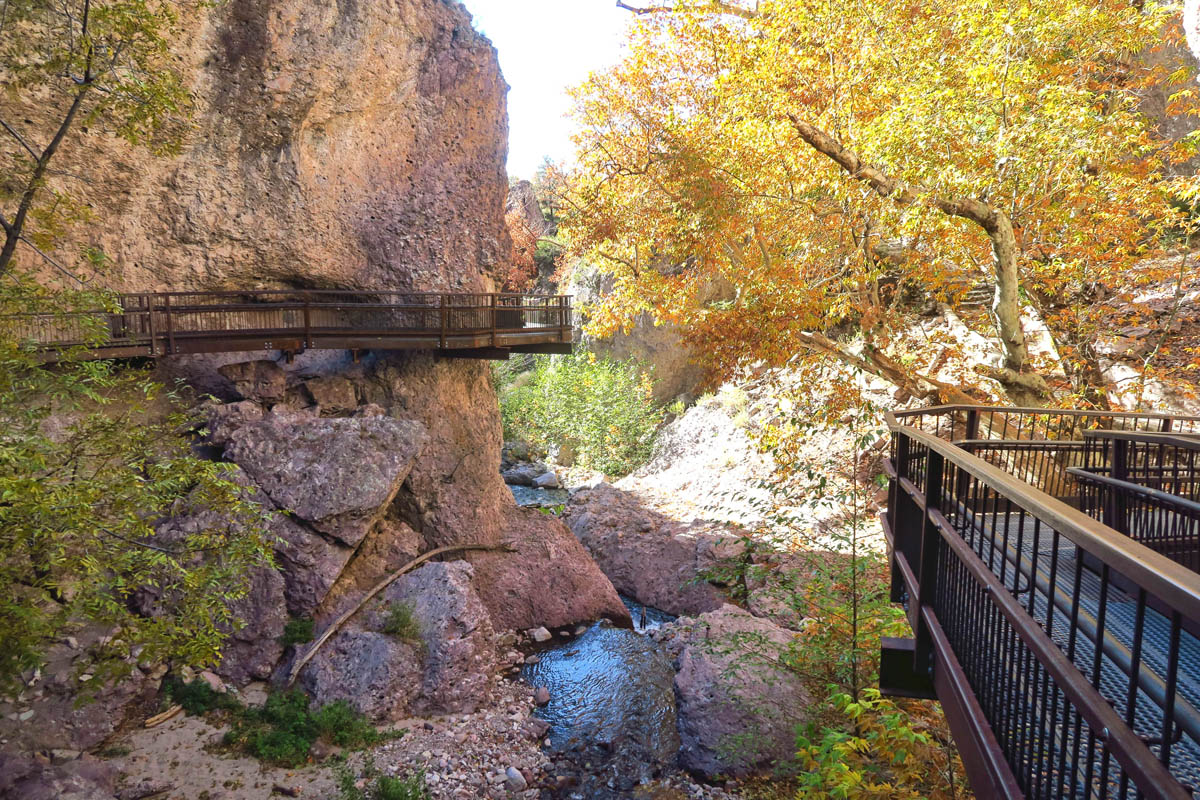 The U.S. Forest Service replaced the wooden trail with metal grating in the 1960’s. Half a mile was made wheelchair accessible in 2003.

I’ve had distain for the Orange Stain since my 10 years of living in New York. My office in the Financial District was on the 12th floor of the historic, 71 story building at 40 Wall Street. We just called it “Forty Wall.” While I often complained about trying to get to meetings navigating through a crowded tourist destination adjacent to the New York Stock Exchange, I loved working on Wall Street. And I loved working in that historical old building. What I didn’t love, however, was it’s official name, “The Trump Building.” Huge, ostentatious gold letters spelling out that name of shame loomed over the doorway where I entered daily.

On September 11th, 2001, after returning on my bicycle from the banks of the Hudson River where I stood watching the World Trade Center towers collapse while coming to grips with the loss of over 2,000 lives, I distinctly remember watching the TV coverage throughout the night. Replaying was the interview of Donald Trump, leaseholder boasting, “40 Wall Street was the second-tallest building in downtown Manhattan before the World Trade Center. And now it’s the tallest.” Since that day, it’s felt personal.

One thing I did have the privilege of experiencing during my years at 40 Wall Street working for the big “blue box,” was what it means to have strong leadership at the helm. Compassion. Inclusiveness. Humility. Honesty. Accountability. And most of all…Integrity. Oh, how I have missed those competencies over the past four years, and oh how good it feels to get a whiff of that once again today. 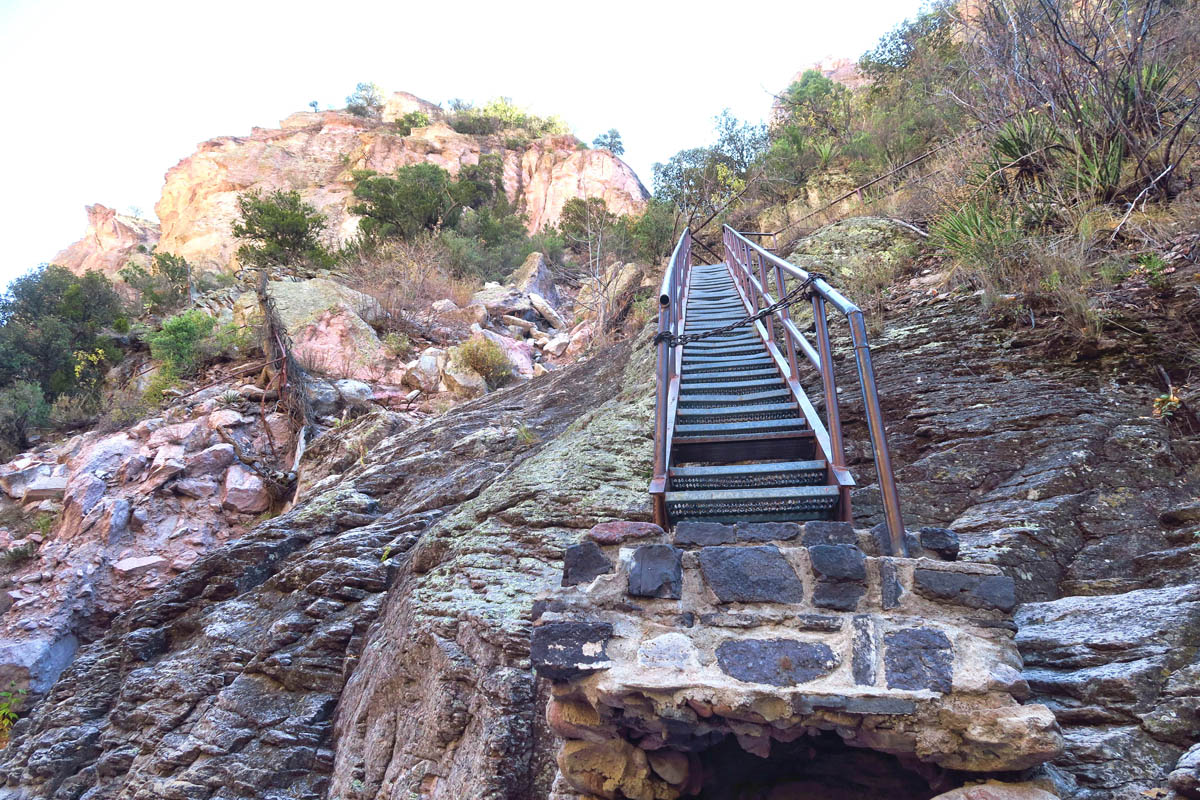 In 2012, a flood following the Mt Baldy fire destroyed most of the Catwalk. While much of it has been rebuilt, the famous suspension bridge is no longer there, and only about half of the original loop has been restored. 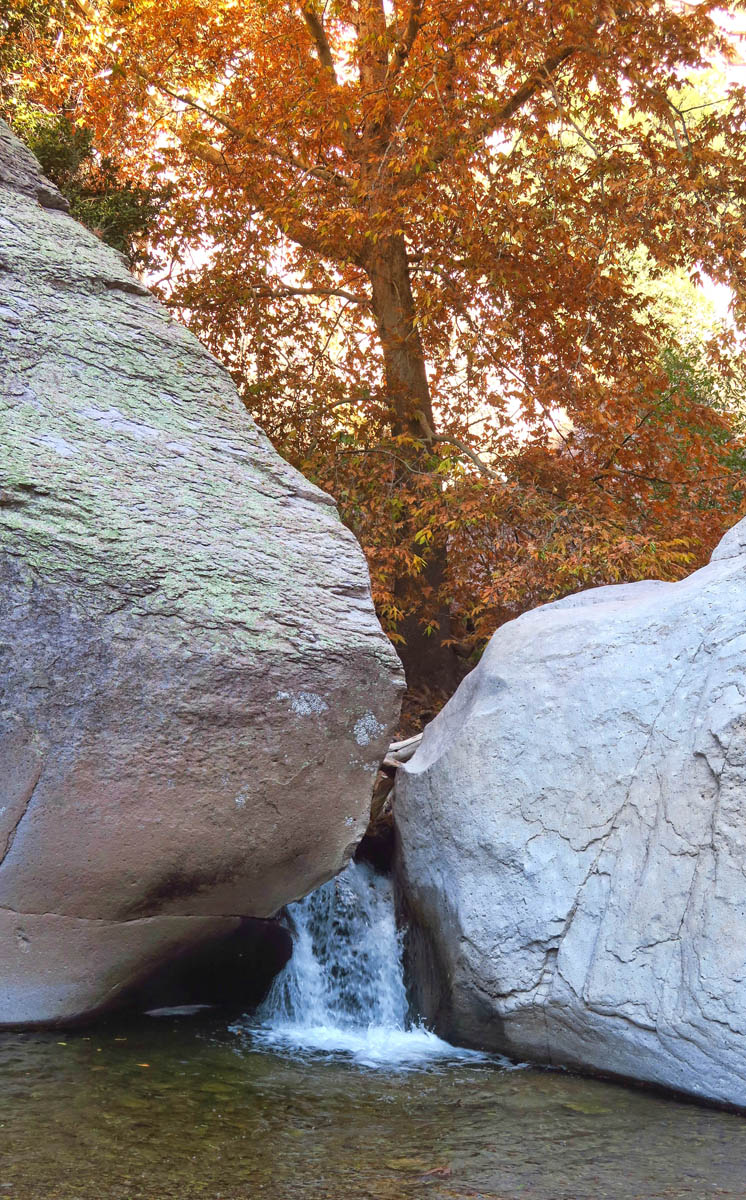 The “swimming hole” is now the end of the trail. Traveling beyond this point means scrambling over room-sized boulders lining the creek. 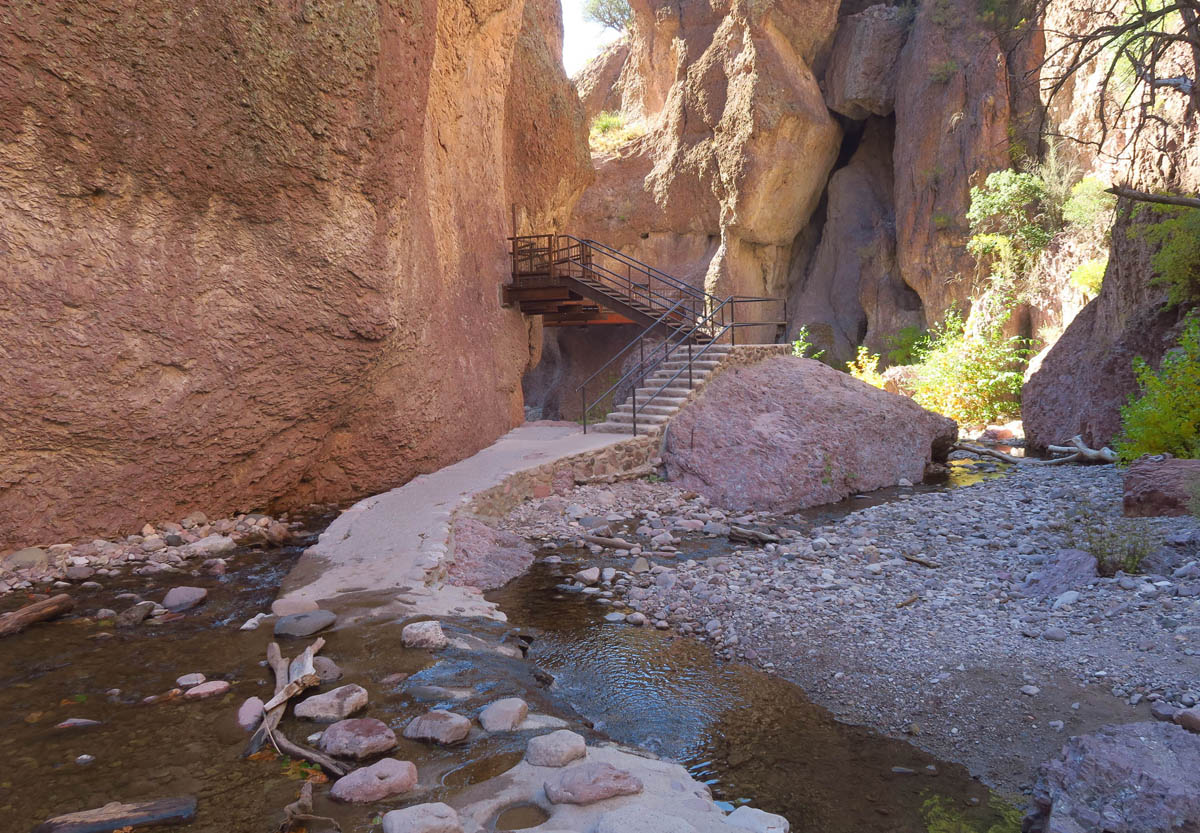 There are a couple of water crossings along the new trail. 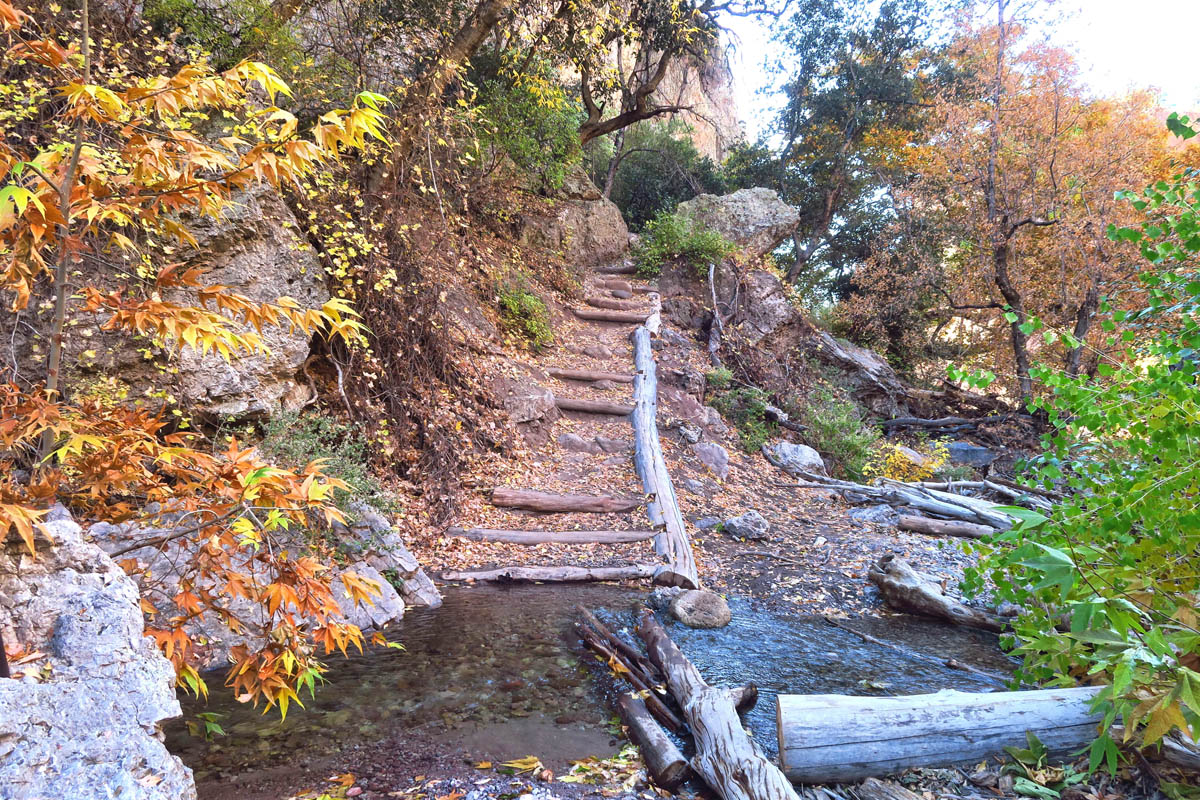 This water crossing must be navigated across wet and slippery logs. One foot stayed dry. 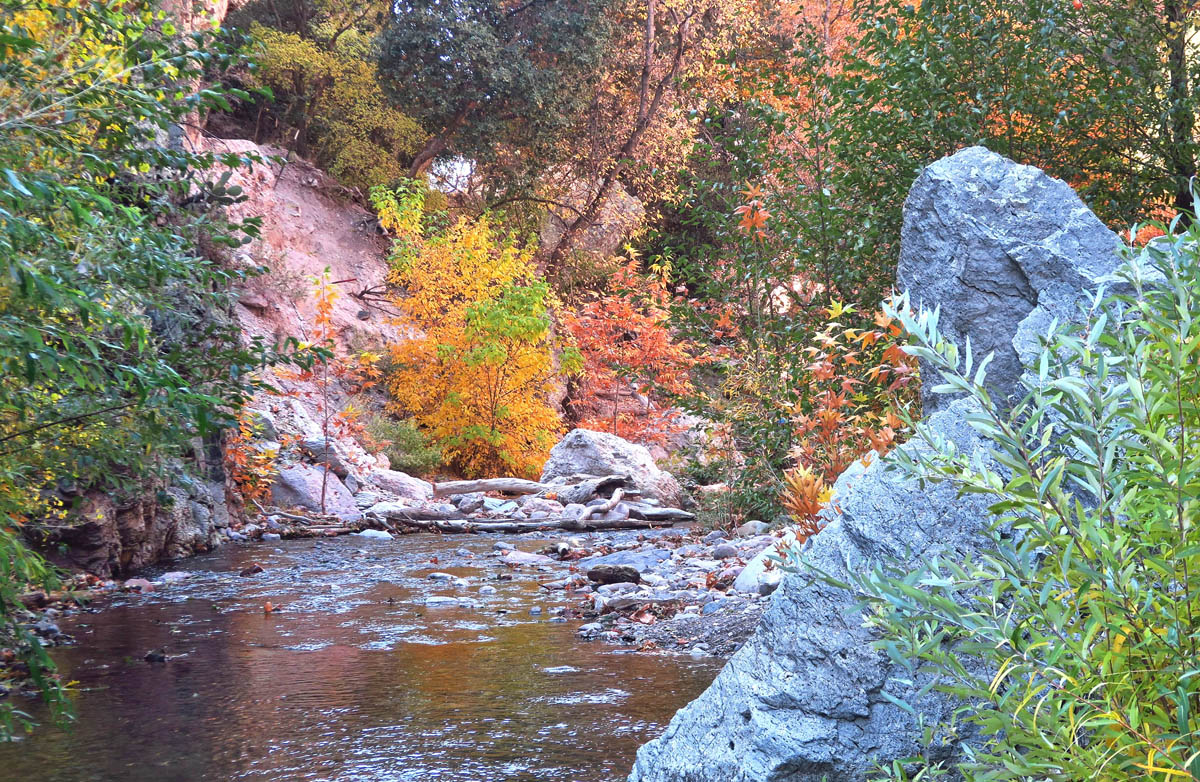 Fall is an excellent time to visit the Catwalk Recreation Area due to the beautiful fall colors of the turning leaves. 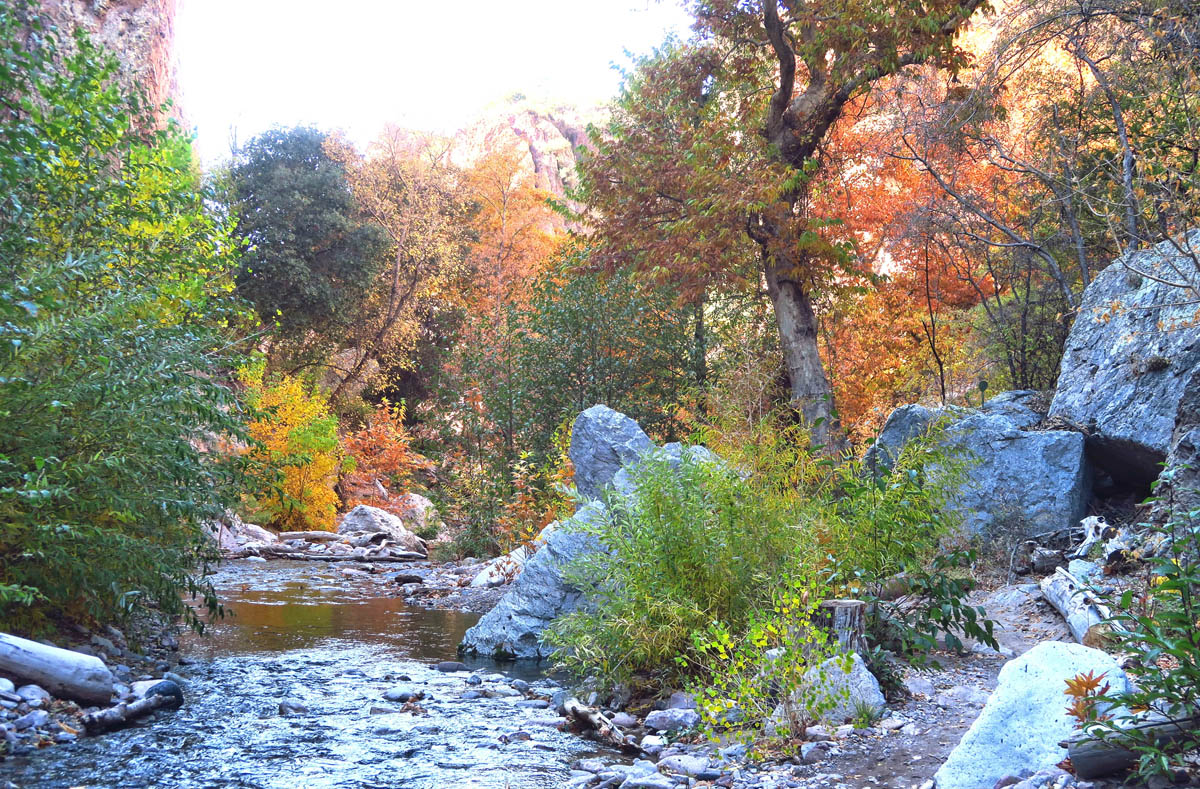 An early morning mid-week visit means very light traffic. I saw only half a dozen people along the path. 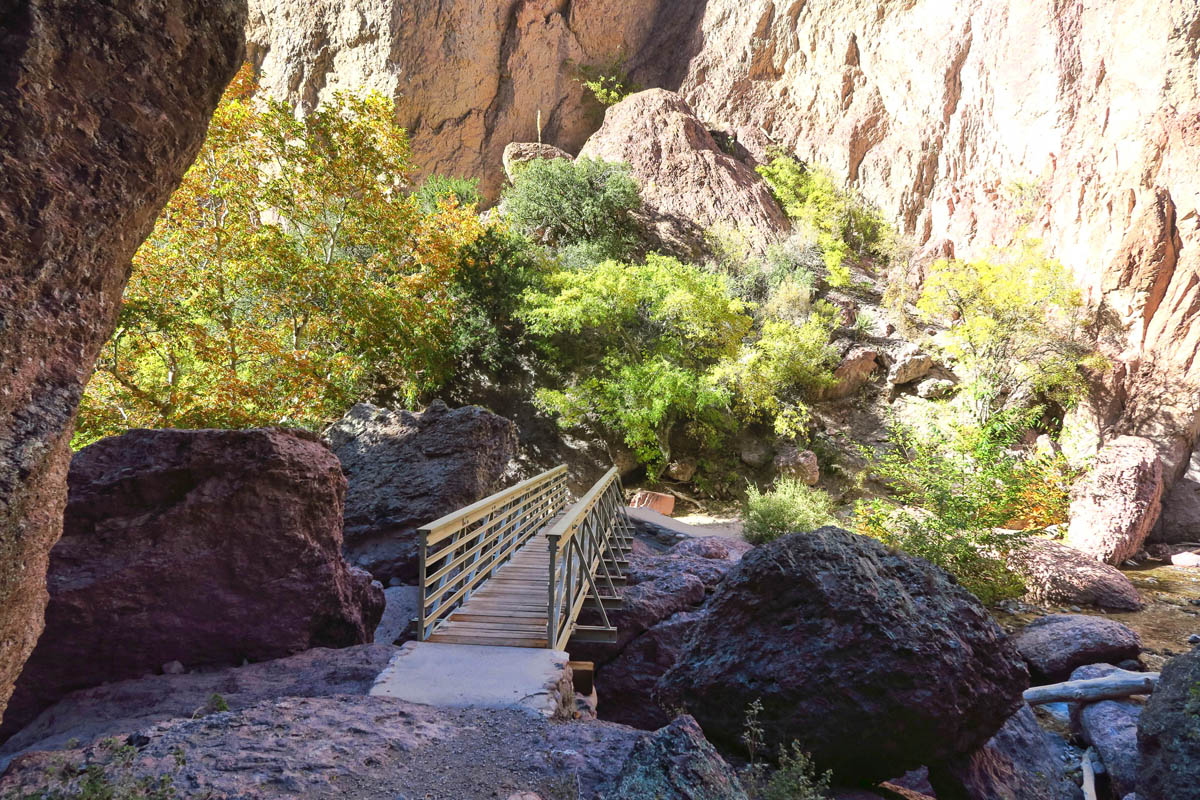 The bridge along this section was made of fiberglass. 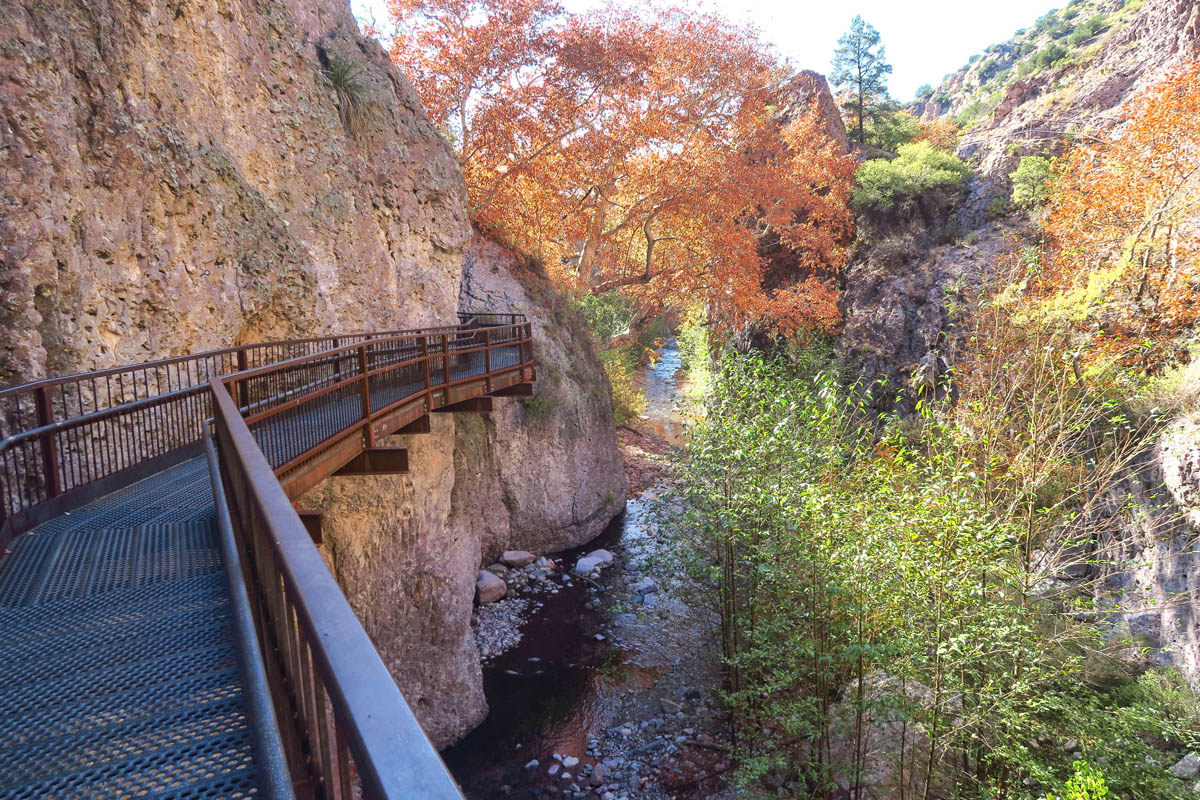 While much of the original loop is under construction, it’s still possible to choose from two different routes. I took the more difficult path out, and the easy trail back. 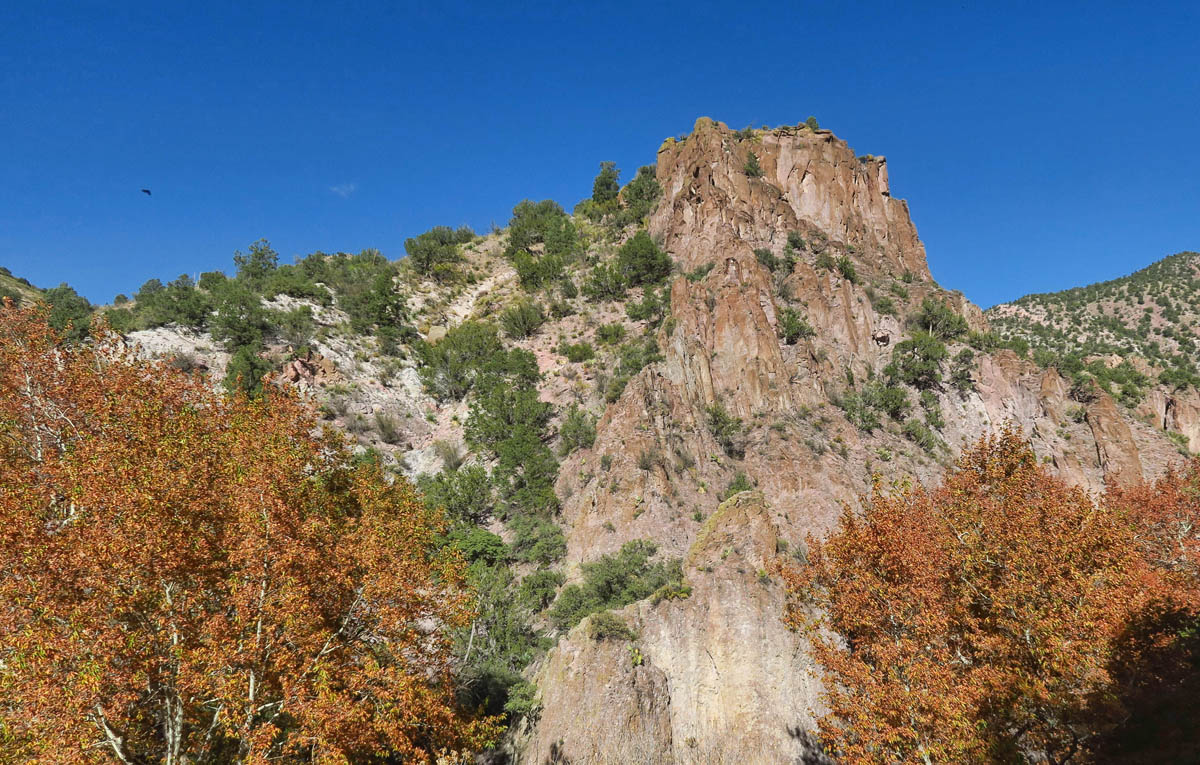 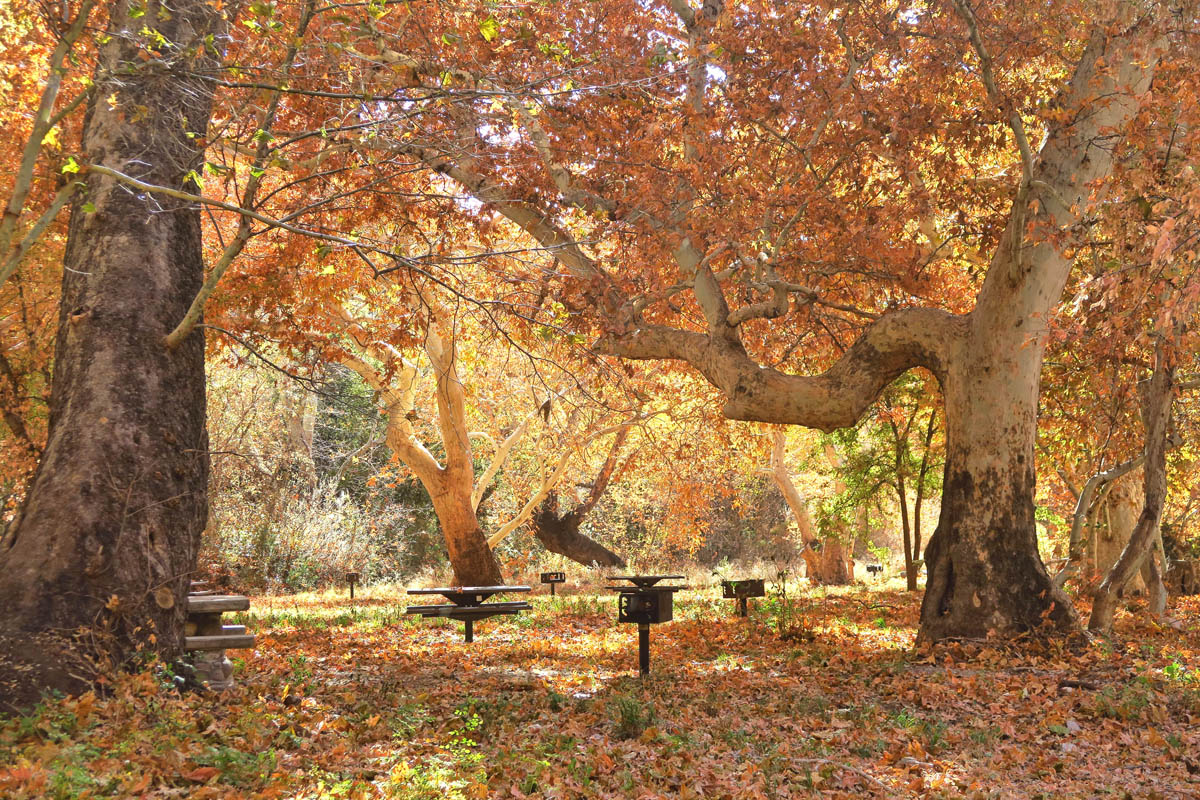 At the trailhead is a lovely picnic area shaded by some magnificent Sycamore trees.

The hashtag, “ETTD” (Everything trump touches dies) seems to hold true. Trump University, Trump Vodka, Trump Steaks, Trump neckties, Trump Airlines/Shuttle, Trump mortgage. Even his Atlantic City casino, Trump Plaza, is scheduled to be blown up on 29th January, auctioned to the highest bidder for the pleasure of pushing the demolition button, with the proceeds going to Boys & Girls Club. I just hope the second impeachment is the final wooden stake through the vampire’s heart before democracy also falls victim.

I am not so naive as to think that seeing trump leave “the people’s house” will solve the nation’s problems any more than I think a cleaning job will last. The stains run deep. But for today, it’s a new day, it’s a new dawn….and I’m feelin’ good. Really, really good.