It’s been an unprecedented amount of time since I last updated this blog. In fact, it took a couple of minutes for the WordPress process to come back to me. As always, thanks to those friends and family who have touched base via email and messaging.

Here we are with well over half of the summer gone…well over half the year gone. And I’ve got nothing to show for it. After having lost almost a year in 2020 with no goals achieved, I didn’t anticipate being halfway through 2021 in the same boat. In future years, I am going to look back on this time and wonder, “Why don’t I have something to show for the entire half of the year?” It was understandable in 2020. However, 2021 takes a bit of explaining. Or at least rationalizing.

I’ve already spoken about the event that got 2021 off to a turbulent start. Regardless of political affiliation, the eyes don’t lie when it comes to our first failure at peaceful transfer of power. It was definitely an unprecedented way to begin the year, the presidential term, and the decade.

After nine years of living full time in the Winnie, this was the first winter I was not able to travel beyond our borders in search of warmer weather. As the pandemic resurrected over the winter, I continued my efforts to stay a little closer to the farm by exploring the Texas coast. Having grown up in Texas, the Gulf Coast was a familiar playground, though I had never visited it as an RVer. I had fantasies of long walks in shorts and tee shirts, strolling along a sunny beach, the sand between my toes. But instead, I spent my entire time there bundled up in fleece as wind and weather equivalent to a tropical storm hung around for my entire stay. 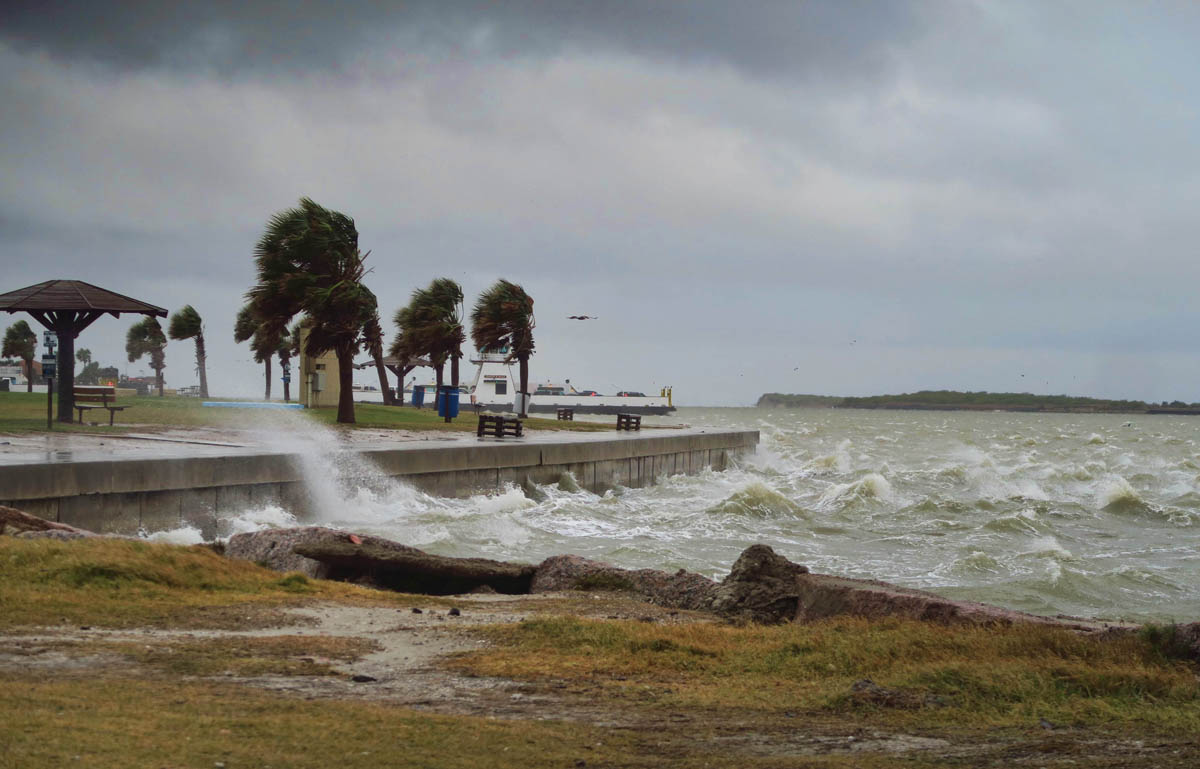 Crazy weather in Port Aransas. Cars were lined up along the harbor watching the weather move in. 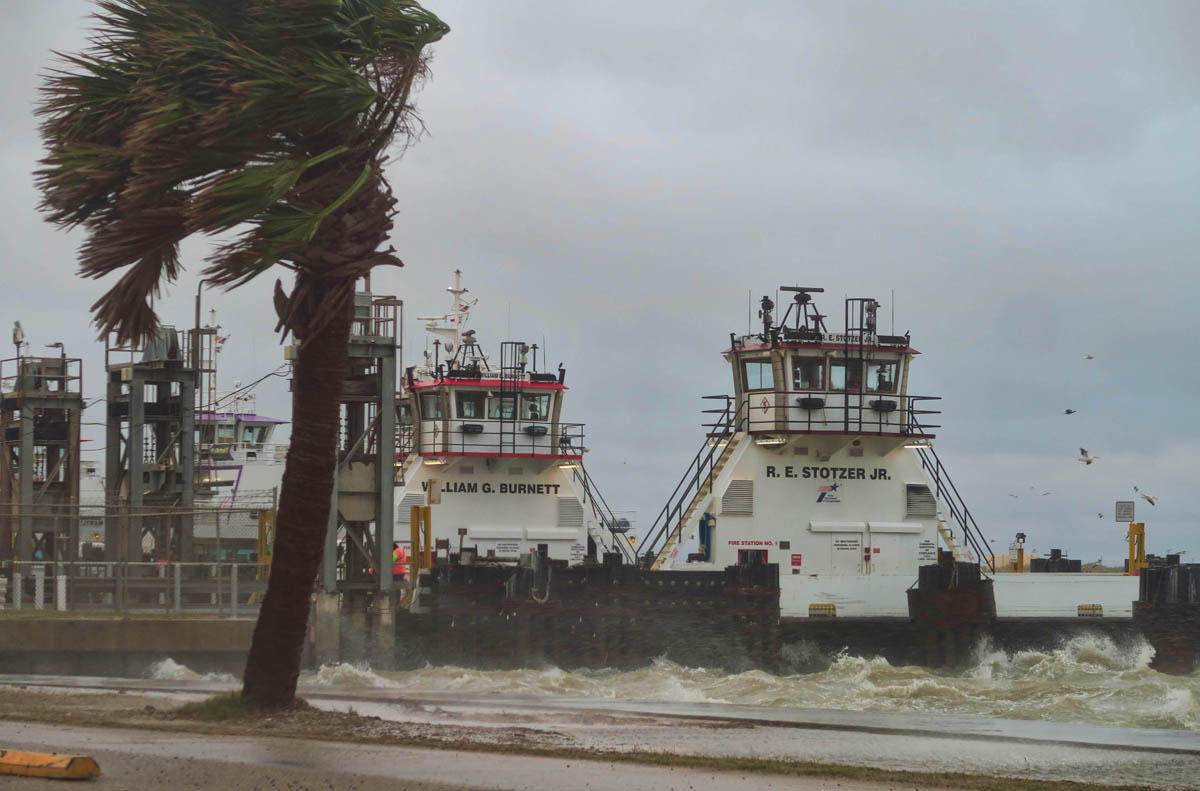 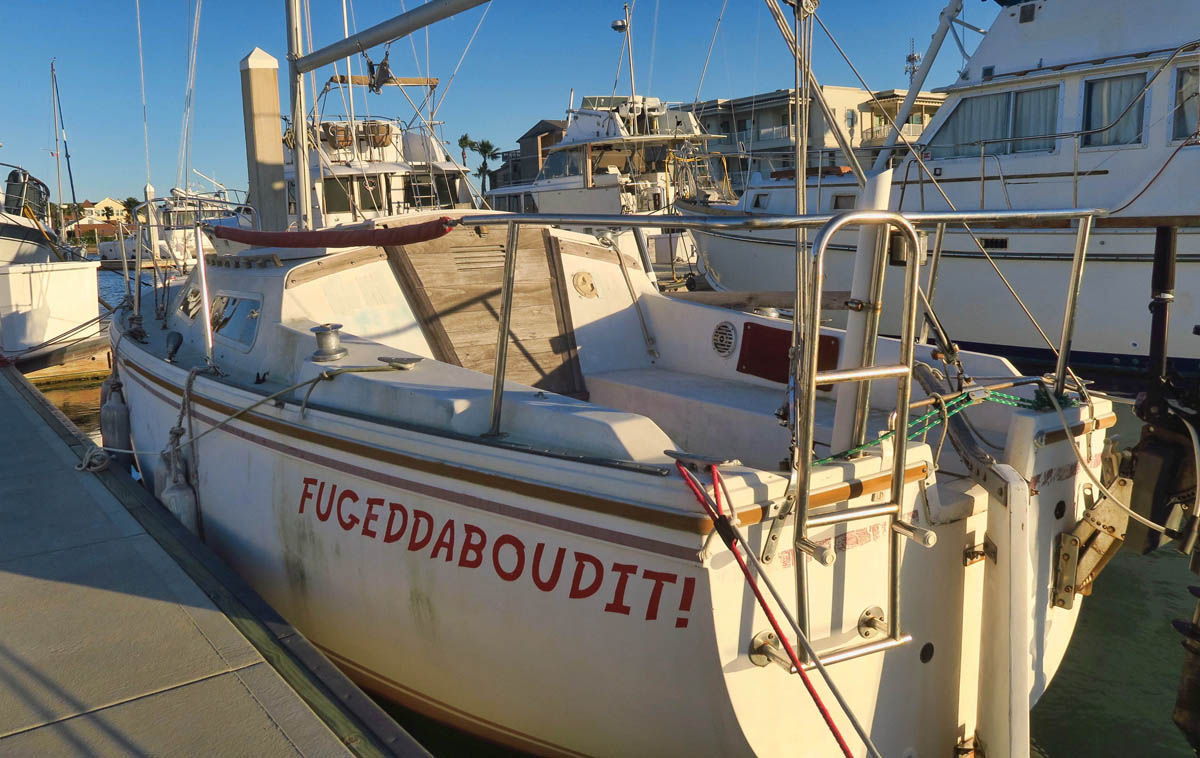 Even when the sun was out, the wind was brutal. I gave it a week and finally said…. 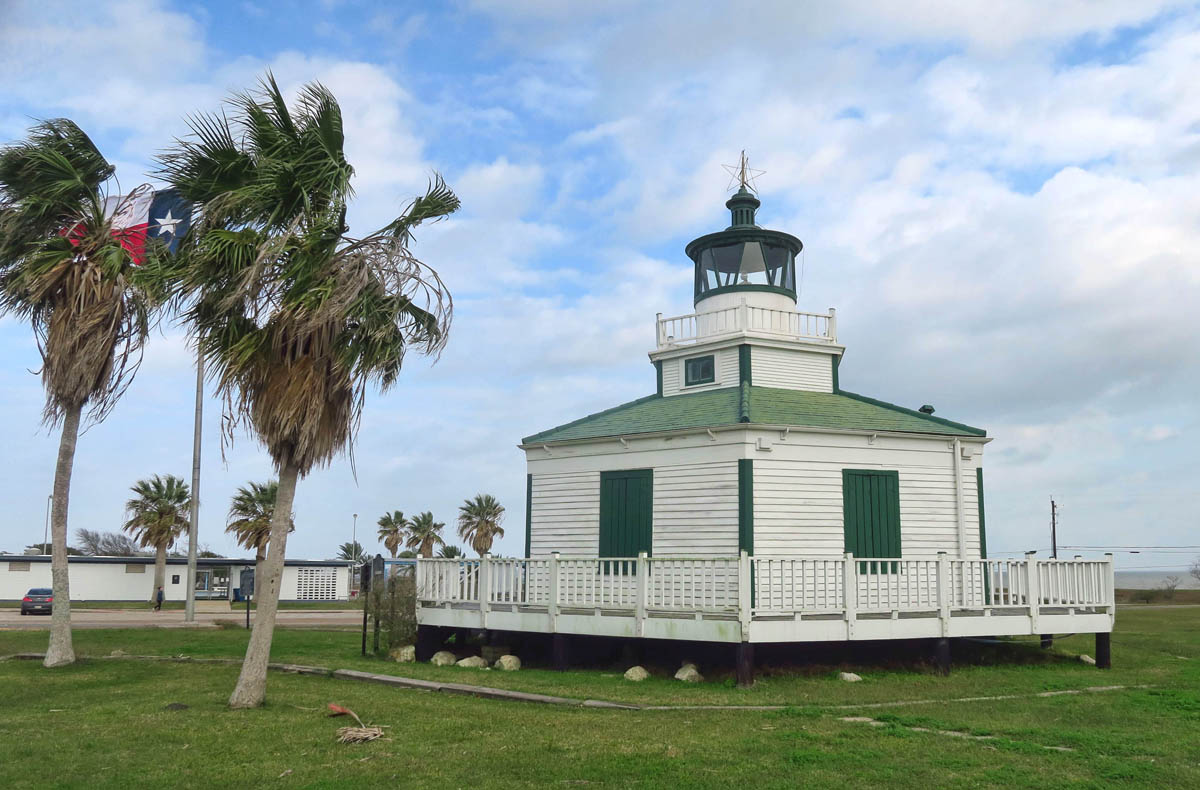 What kind of post would a coastal crawl be without a lighthouse? The hexagonal, three story Half Moon Lighthouse built in 1858, retired 1942 used to stand on piles out in Matagorda Bay where its beacon extended for 12 miles. 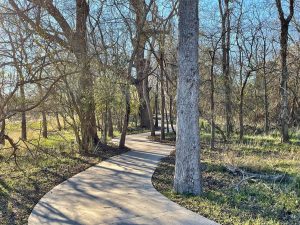 Working my way back up the Texas coast, I finally landed in a comfortable spot. Of all places, a city park in Victoria, TX with lovely walking paths next door. 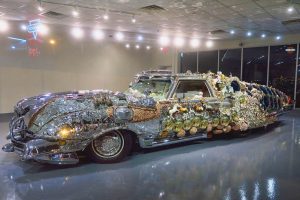 Victoria held my interest longer than I could have anticipated, including the offbeat Contemporary Art Museum. 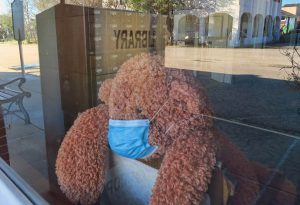 I did a couple of day trips from Victoria to explore my native-born state. This one to Goliad with a town square full of history. 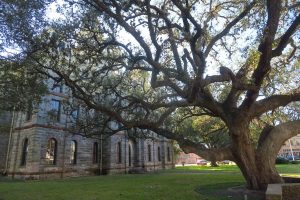 The county seat of Goliad has a bizarre attraction of the “Hanging tree.” 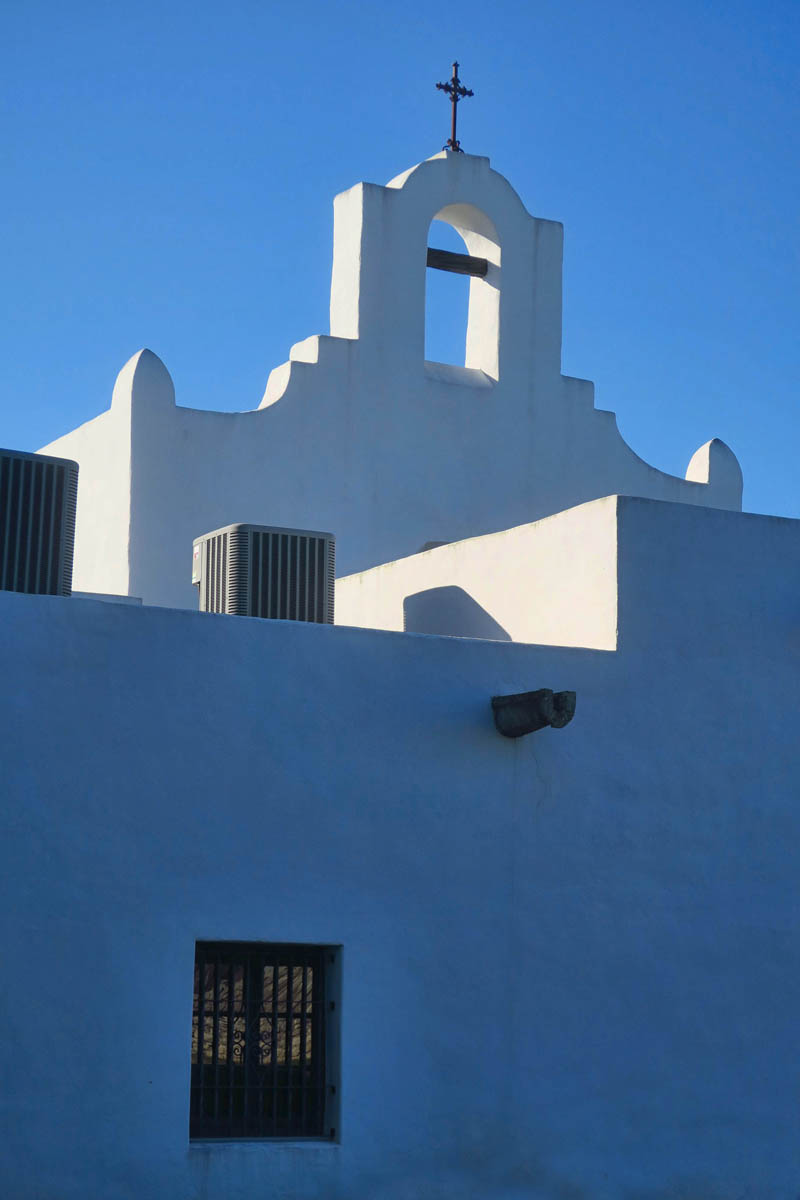 Nearby Goliad State Park is the location of Mission Espiritu Santo. 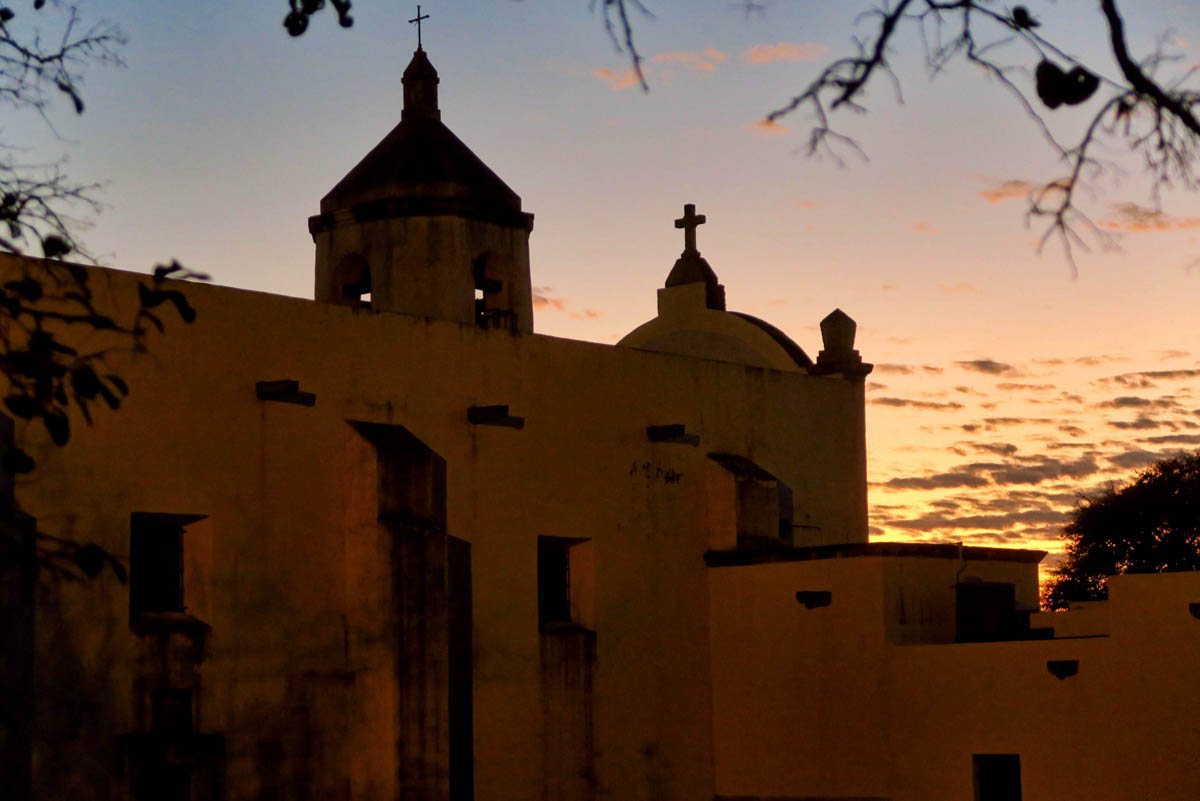 Mission Espiritu Santo, moved along the San Antonio River location in 1749, where Franciscan missionaries taught native Aranama people their religious principles. It became a secular church in 1830. It was incorporated into the Goliad State Park in 1949. 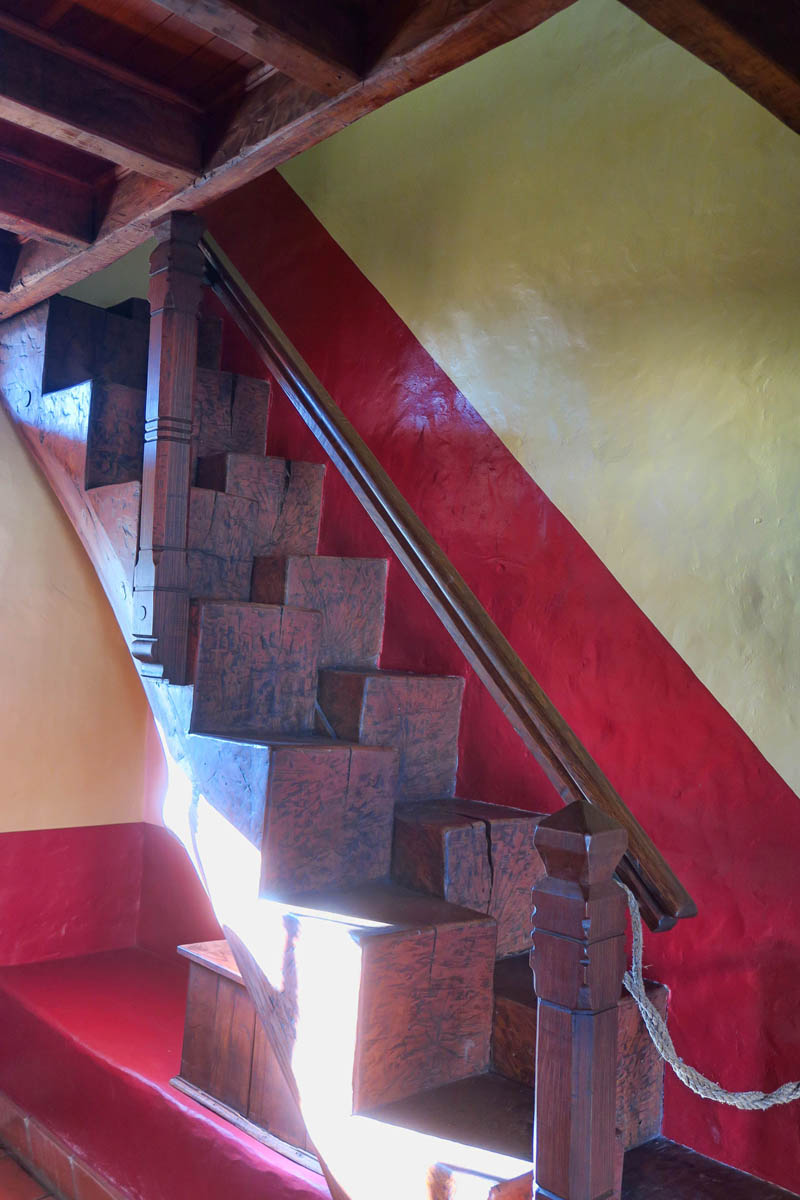 This innovative staircase is cut from a single tree. There wasn’t enough space for traditional sized stairs, so they staggered the steps.

But then February came along and said to January, “Hold my beer!” Texas’ worst cold snap in history with zero degree temps, and an unprecedented number of people without power as Texas’ deregulated power grid teetered on the edge of catastrophic failure as over 4 million residents lost power. With no heat to warm their homes, that meant a loss of water supply as well as pipes froze and burst.

I raced back to the farm in central Texas so my Mom would not have to weather the storm alone. Together, we fortified everything from pipes to pantries to endure the storm as roads became impassable, and newscasters warned of food and water shortages. While entire neighborhoods around us lost power for days, miraculously it stayed on at the farm, perhaps the one benefit of being on the same line as the nearby power plant. Determined not to give up the ship, I spent an unprecedented nine straight days of record low temps living inside the Icebox Winnie. 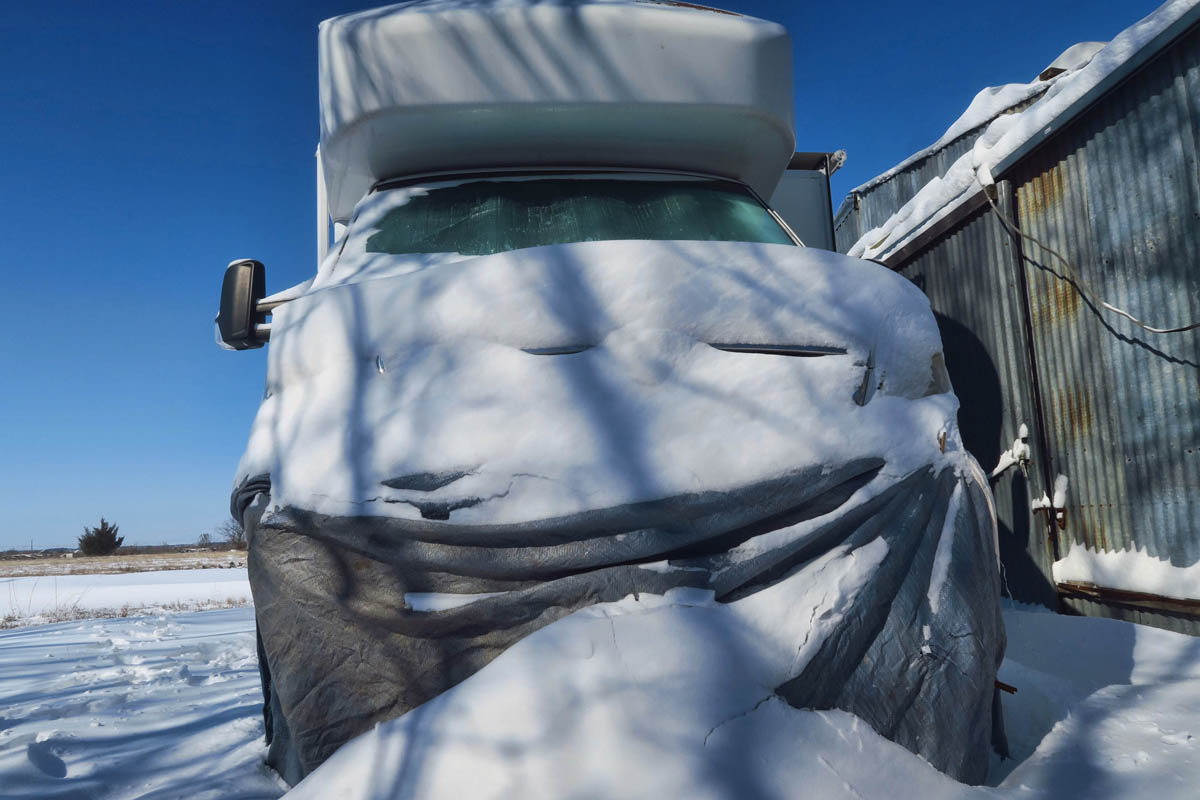 Poor Winnie has never been this cold! I fashioned a “skirt” around her from tarps and old blankets, which helped keep the wind out. 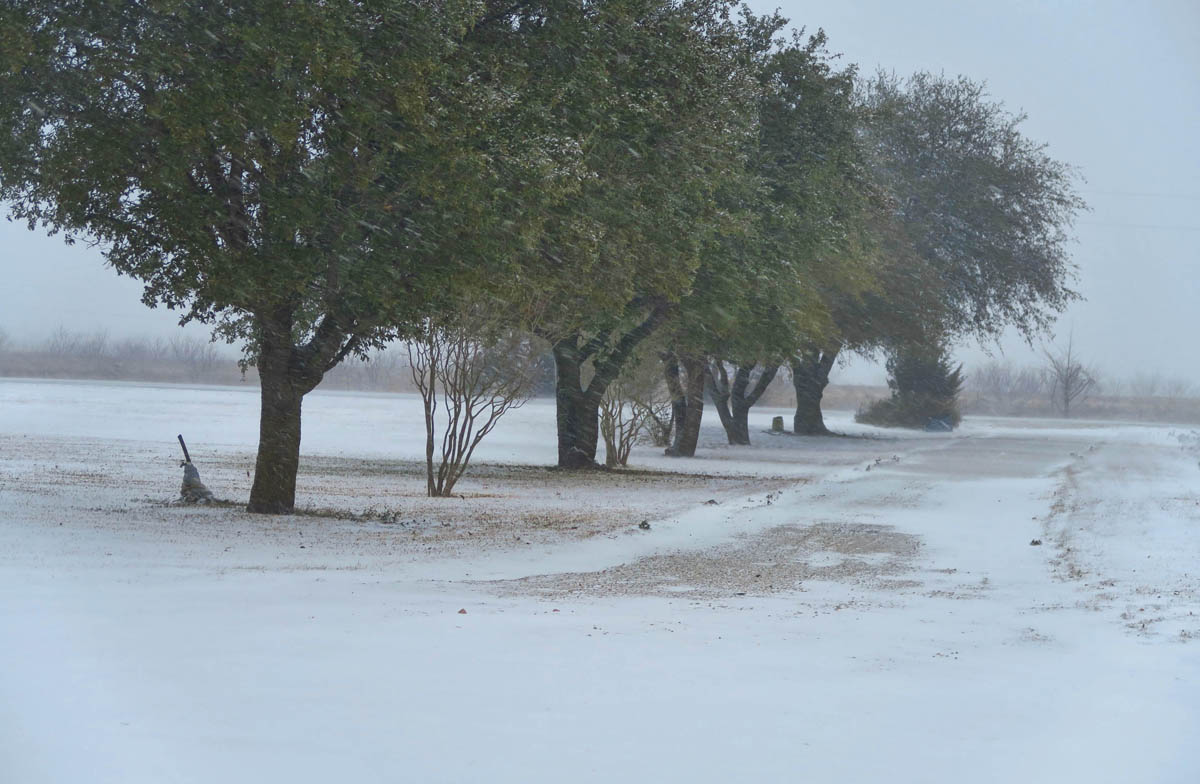 I realize this is laughable by some state’s standards, but we have no equipment to deal with this. The driveway just stays buried until it melts, then freezes over into a solid sheet of ice. 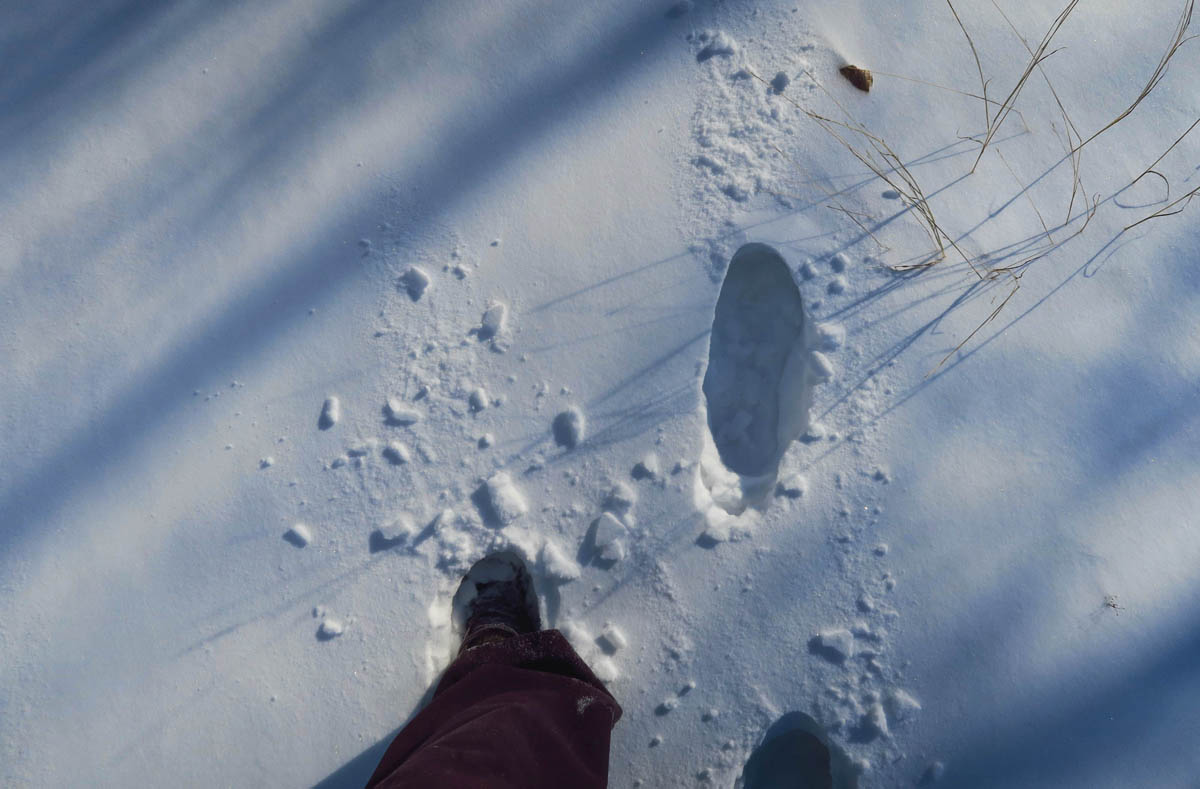 This amount of accumulation is pretty “unprecedented” for our area. 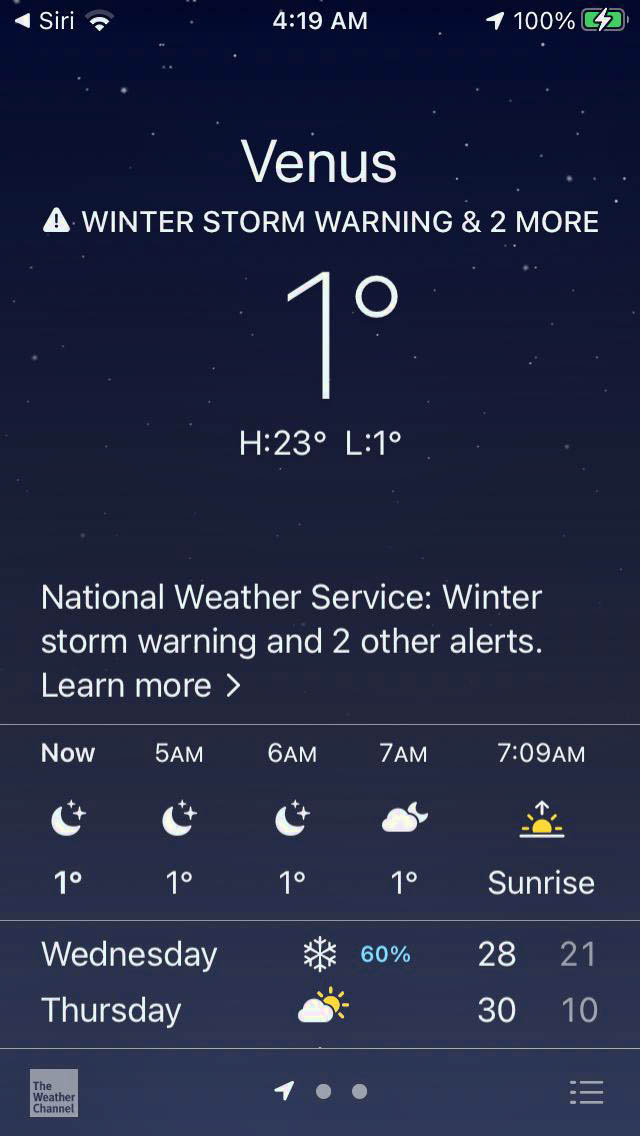 I said I had never slept in the Winnie when it was cold, but when I look at the time stamp on this temperature check, maybe I wasn’t sleeping after all. 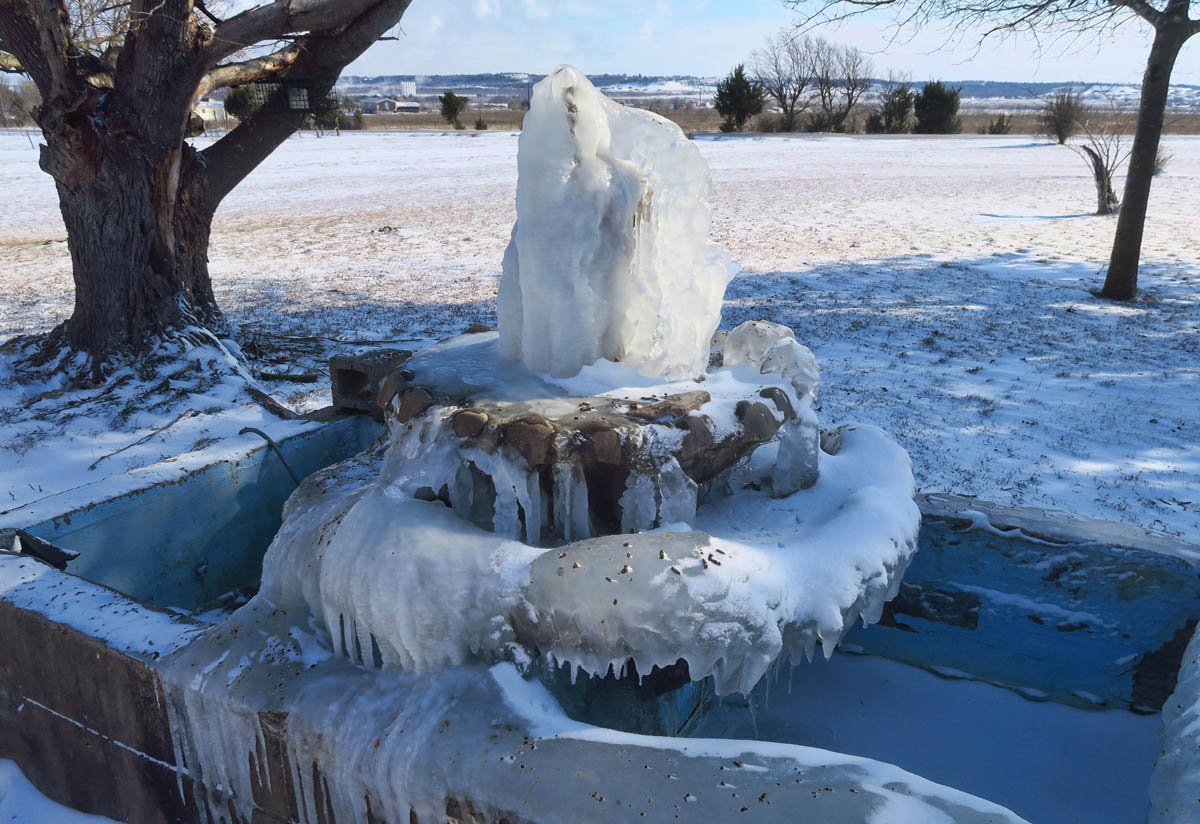 One of the tasks that kept me focused throughout the storm was keeping Mom’s birdbath flowing. While it doesn’t appear so from all the ice, the pump is actually still flowing, and one quarter of the water surface is thawed due to her pond heater.

Record-breaking February now behind us, March brought a milestone breakthrough, as my two-month long search for vaccination appointments finally paid off for both my Mom and me. Once we were fully vaxed, we began the uphill climb toward getting caught up on doctor’s appointments postponed during the pandemic. We spent the month of March burning up the road to eye doctors, cardiologist, dentists, testing labs, etc. 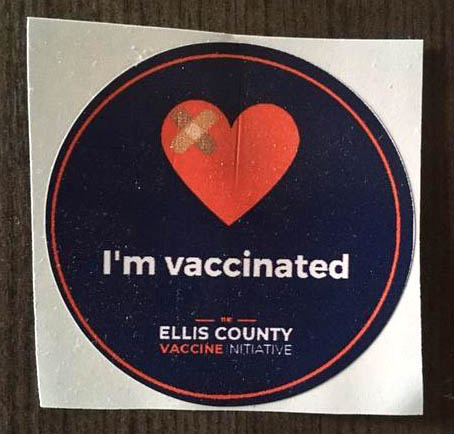 April was not fooling with its own unprecedented event. I had driven five miles over to the nearby community park for a walk with my niece, with nothing but a slight chance of showers in the forecast. However, springtime in Texas laughs in the face of weather forecasters. A freak 10 minute hailstorm blew over, dropping racquetball-sized hailstones, and leaving me with $7,000 worth of damage to the Winnie. A busted skylight, holes in the rooftop AC cover, shredded awnings, and some undesirable “texture” in the hood. Had I not driven to the nearby park in the Tracker, its ragtop roof would have no doubt been flattened as well. 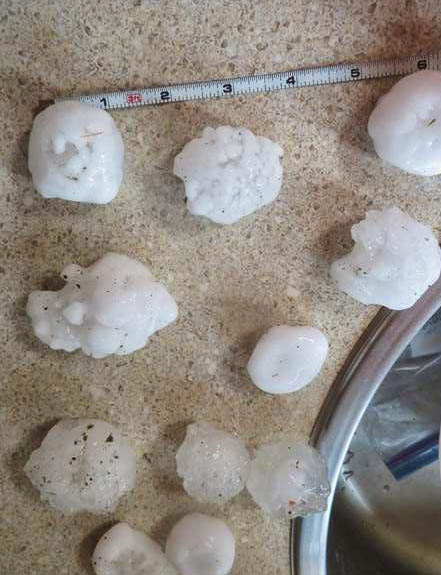 Photo courtesy of brother Don. While I was across town walking in the park, he was riding out the storm inside his Navion. 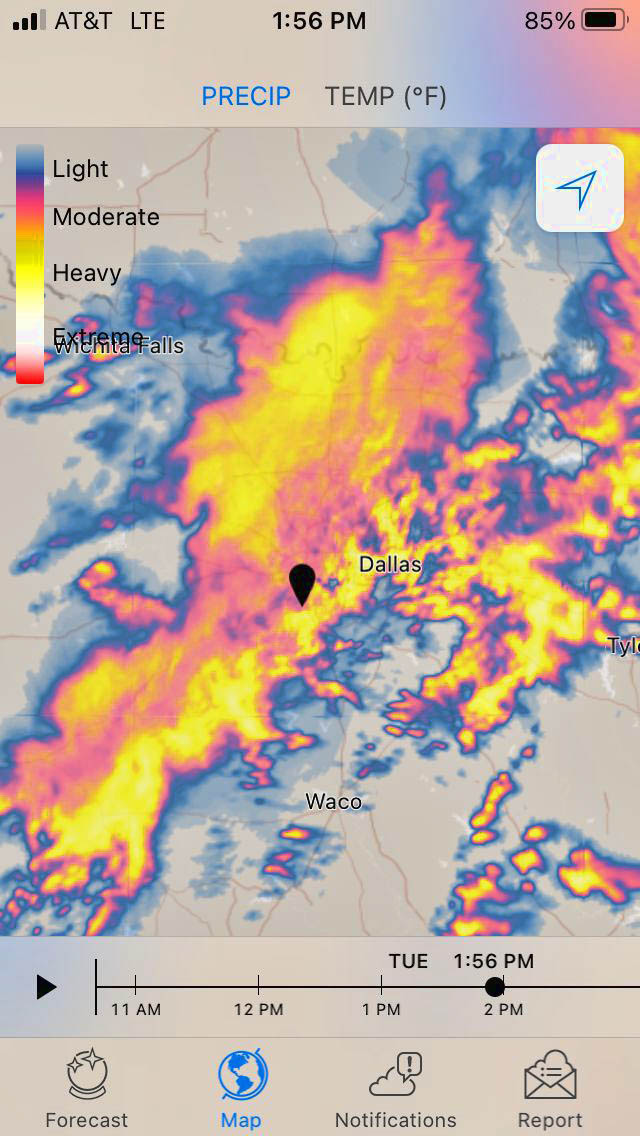 This became the “norm” this spring. 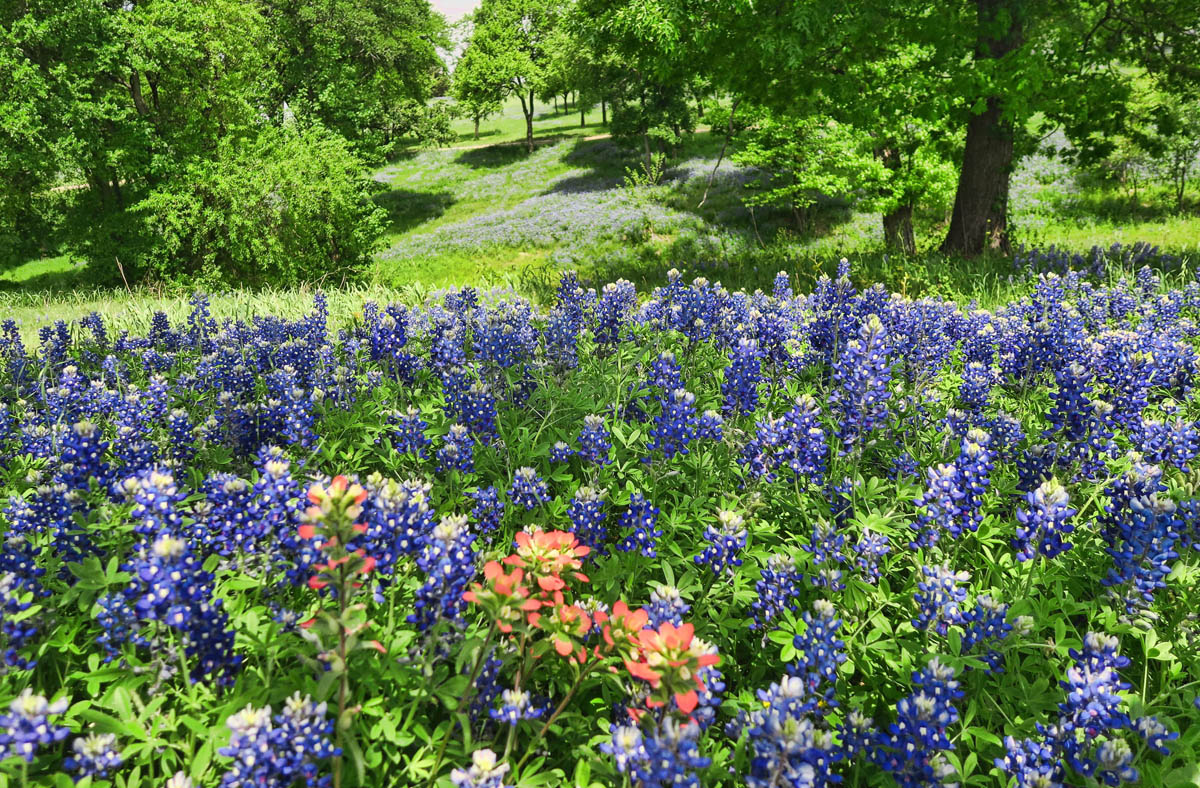 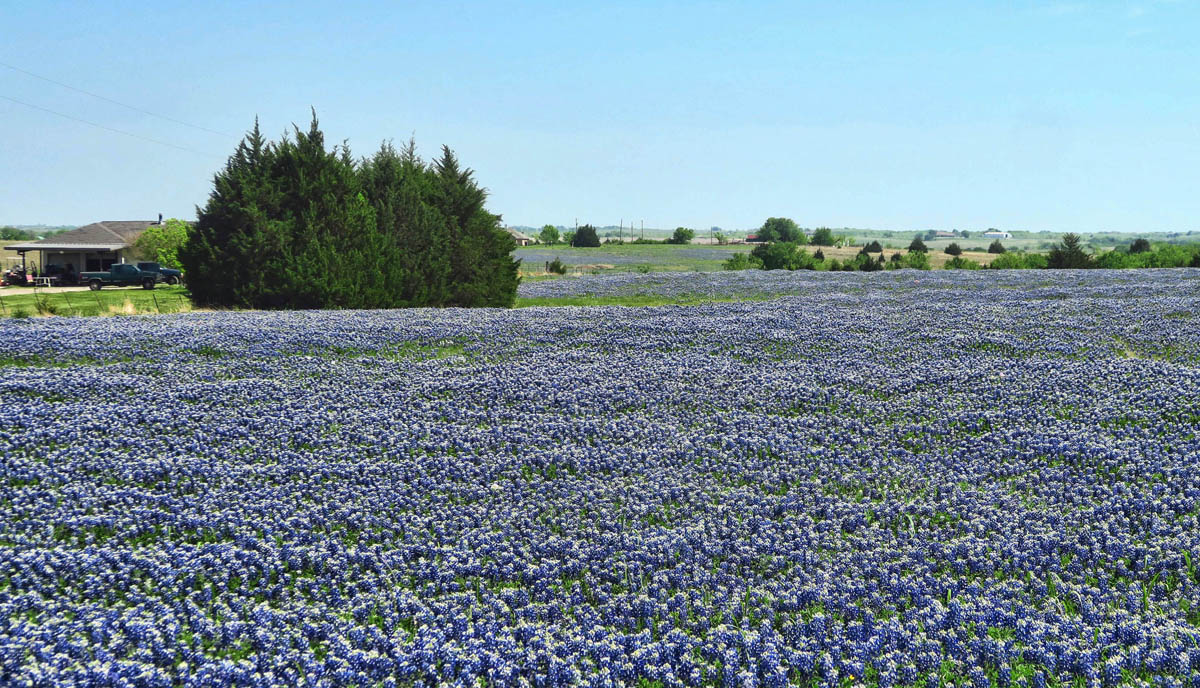 While it wasn’t the most prolific year I had seen, the powdery fragrant blue harbingers of spring still made a respectable showing.

It would take the rest of April and all of May to complete the repairs to the Winnie. Meanwhile, May on into June was filled with unprecedented heat domes in the PNW, droughts in the desert, floods in the plains, fires throughout the forests, record bookings at RV parks, and unprecedented crowds overflowing our National Parks, thwarting RVing plans as fast as I could make them. 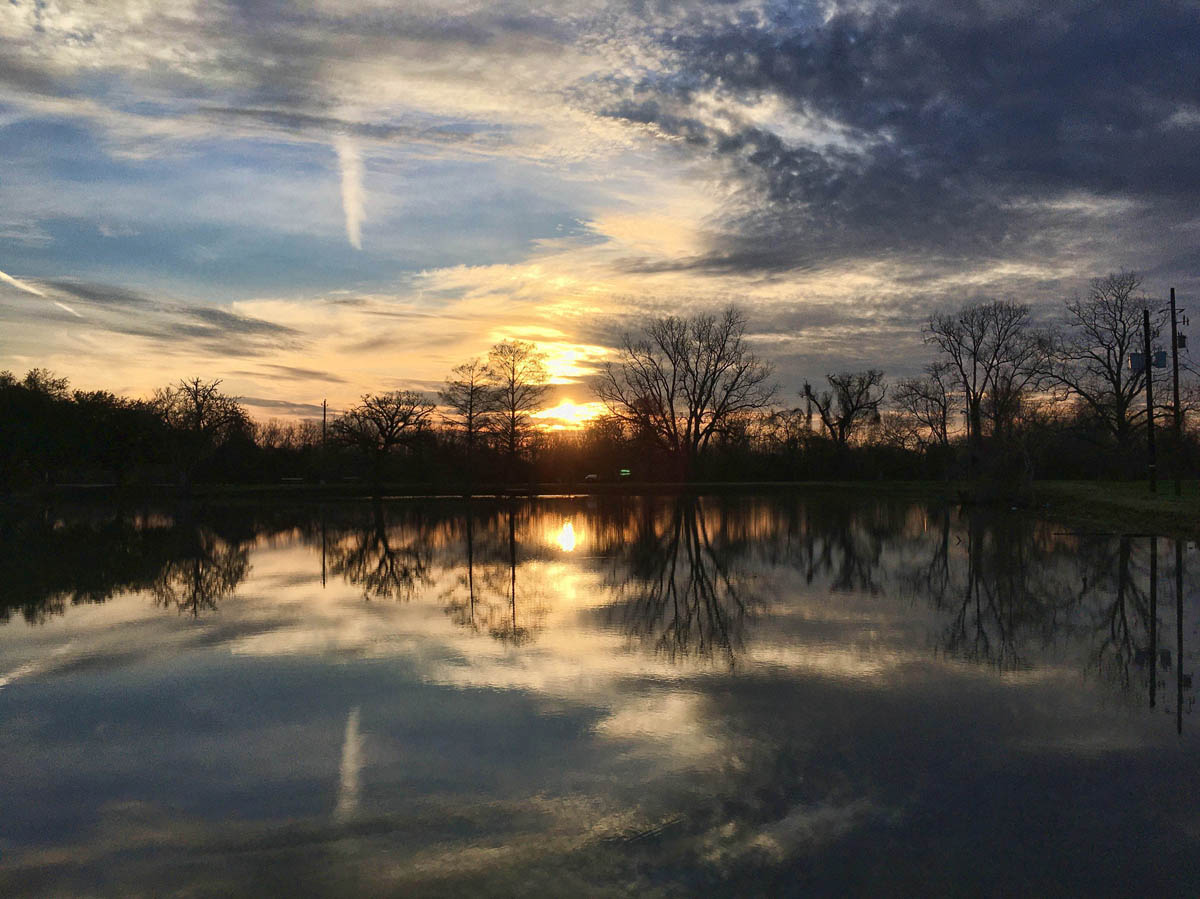 I hopped from one park to the next while awaiting repair parts. 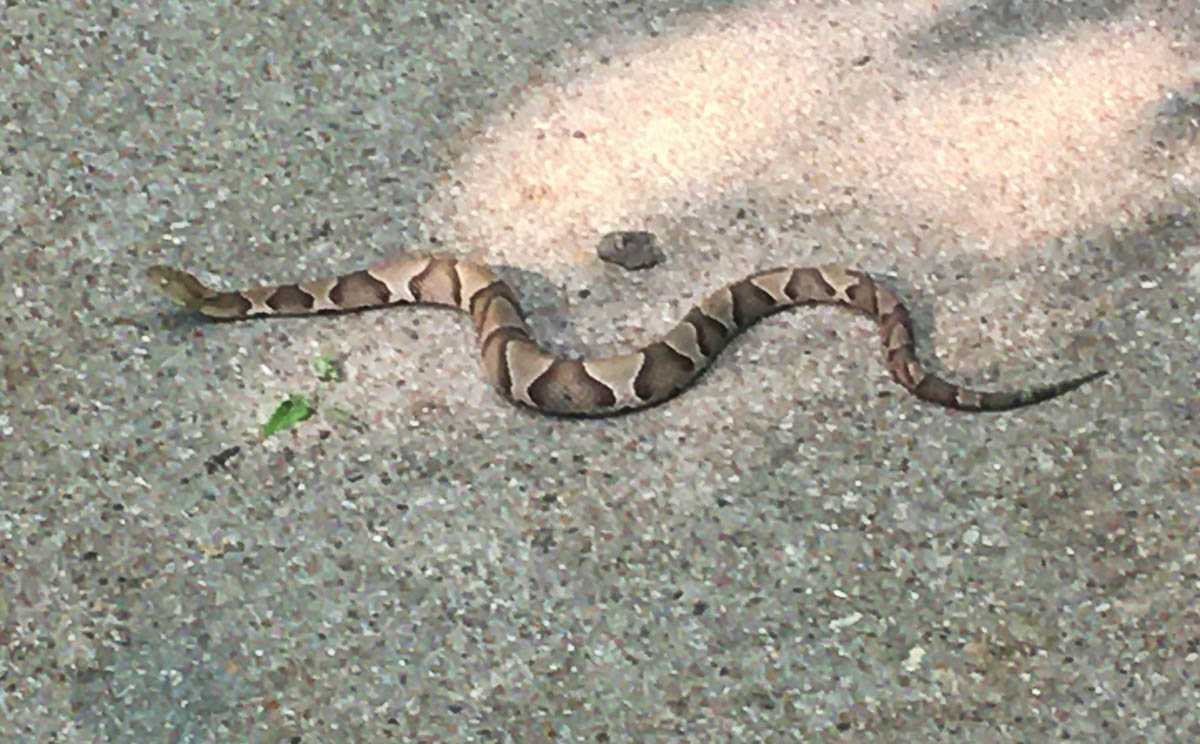 Unwelcome occupants in one of the parks…I am pretty sure this is a copperhead. 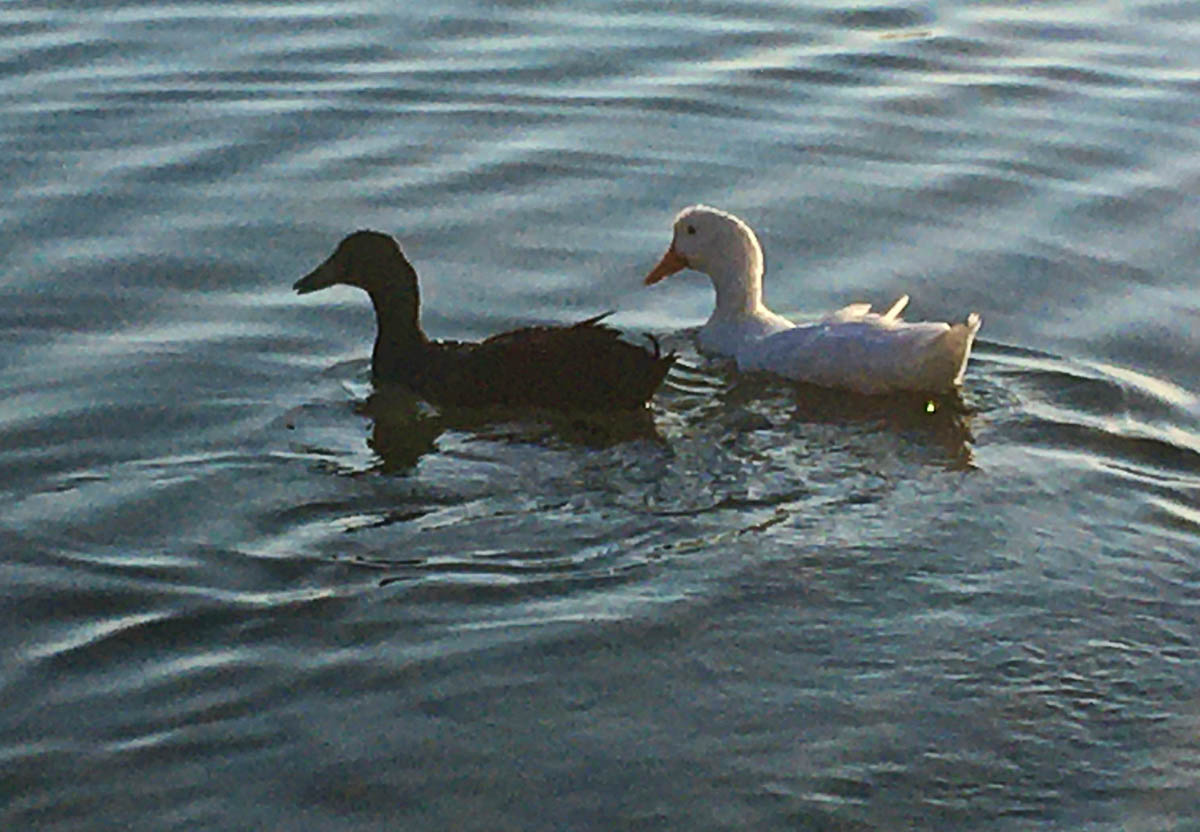 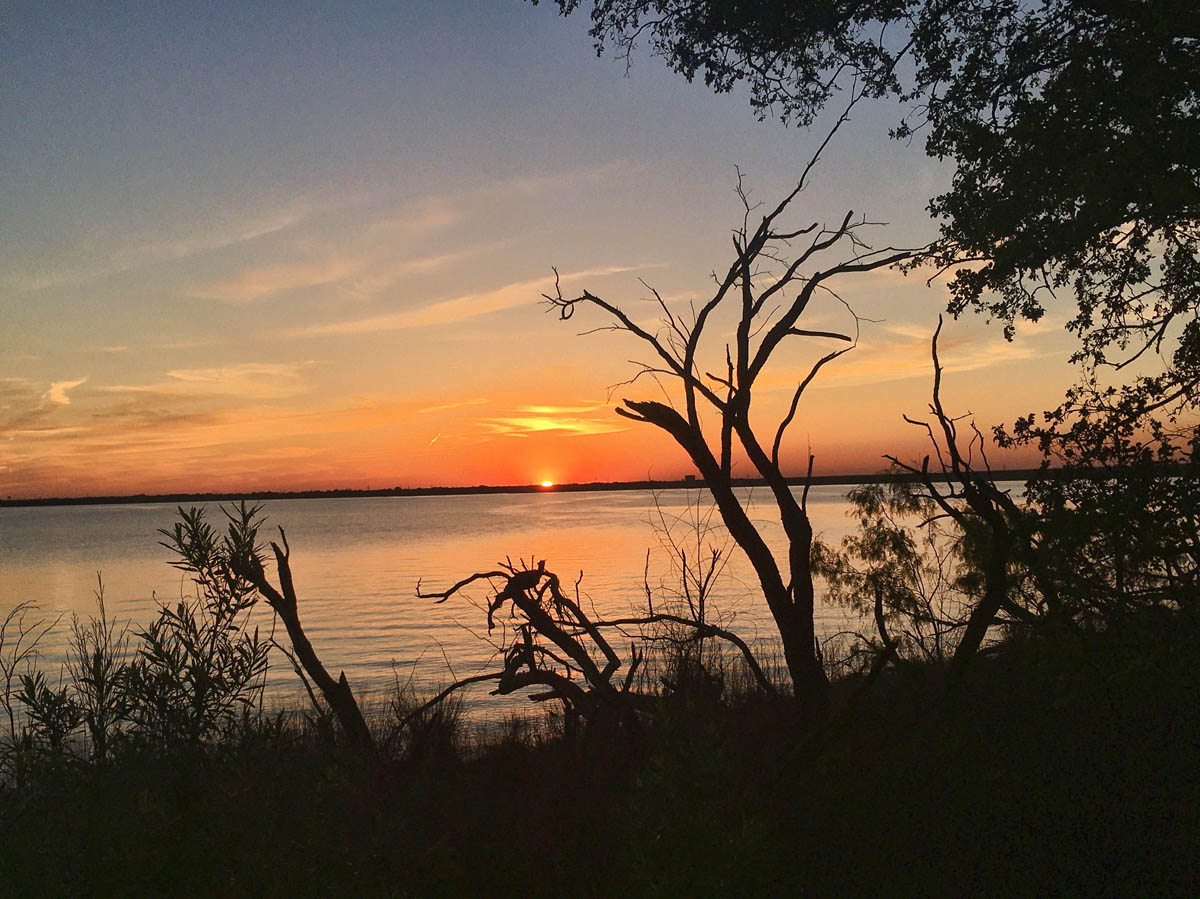 Between the waves of bad weather, bad crowds and bad news, I just couldn’t battle it this summer. So it seemed like a good time to stay put for awhile in the most comfortable place I could think of, so I retreated to a mountaintop perch in the national forest of New Mexico.

As a result of these unprecedented times, I have spent far too much time away from the things I love most. Travel, taking photographs of the beauty that surrounds me, and writing about those experiences to fill in all space on the blog and the space in my life. I have missed those things to the point that it aches sometimes. I have often said there is a reason why bloggers only seem to write about the good times, and don’t often tell the complete story. It’s tough to get motivated to write about the challenging times. Too much “unprecedented” can do that to a person.