The three day weekend of Memorial Day offered just enough time for a quick weekend out of town getaway….”a vacation from our vacation.”  Don had been studying up in his Lonely Planet, and found one of Mexico’s “Puebla Magicos,” or magic towns nearby, Patzcuaro.   Situated on a lake in the mountains, it sounded like the perfect getaway.

In order to reach Patzcuaro, we would need to change buses in Morelia, an added bonus since neither of us had ever visited this capital city of the state of Michoacan.  It would take just short of four hours to reach Morelia by bus from San Miguel de Allende, and a bargain at $195 pesos, just around $15 USD.   We would overnight there and do some “speed touring” on our way to Patzcuaro, just another hour away via a frequent bus schedule. 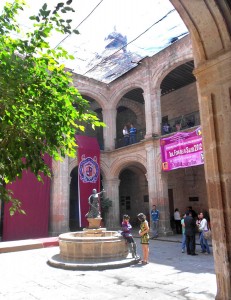 We both fell absolutely in love with Morelia.  Although it is a larger city with all the “big box” stores around the perimeter to meet every need, in the heart is a well preserved old colonial city, founded in 1541,  well deserving of its UNESCO recognition.   It is a very charming city, extremely walkable with wide sidewalks and an abundance of directional tourist signs.  With over five universities there, it offers a very cool “college town vibe”….lots of coffee shops, street musicians, and outdoor cafes. 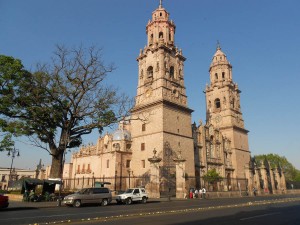 The town centers around the Cathedral, which took more than a century to build (1640-1744) with its 200 ft Baroque towers which dominate the skyline.  It is surrounded by the beautifully landscaped Plaza de Armas, a beehive of Saturday activities taking place from an art show to a march for peace. Steps from the cathedral is the “Tranvia,” or trolley car that offers an hourly city tour, unfortunately only in Spanish, but still a great way to ride around and see the sights, particularly when one is “speed touring” like we were due to limited time. 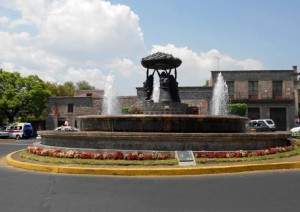 The city has lots of nice green space, with the Plaza Morelos centered around the statue of its namesake on horseback, linked to the Fuente Las Tarascas, (which, I believe translates to “fountain of topless Tarascan women”)  via the 253 arches of the old aqueduct.  Originally built in the 17th and 18th centuries from wood, it remained functioning, bringing water overhead into the city until 1910, when a new water distribution system was installed. 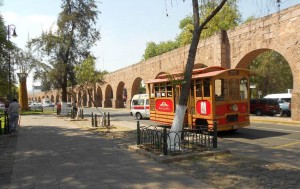 The Tourist Trolley along the Aqueduct

Also running parallel to the aqueduct is the “Callejones Romantica,” or Romance Street, where one can stroll along under the massive tree cover, stopping to steal a kiss along the way on the benches lining the pedestrian-only street. 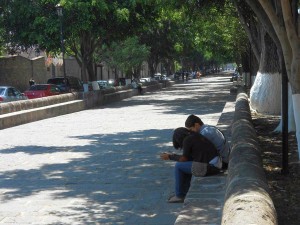 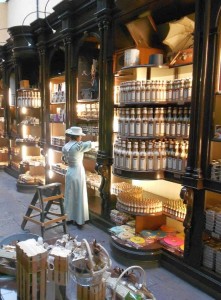 Morelia is also know for it’s “dulces,” or sweets.   The curse of the “Anthony sweet tooth” led me first to the Mercado de Dulces, or entire market dedicated to Mexican-style sweets, followed by a visit to the Museo de Dulces, or museum where the original candy factory was located, where women in period dress demonstrate how the candies are made.   Of course, you can’t get out without passing through the gift store containing floor-to-ceiling sweets made from dulce de leche, coconuts, and chocolates.  Fortunately, due to the high content of sugar in the Mexican-style candies, a little goes a long, long way! 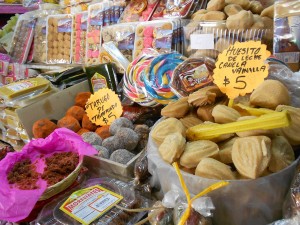