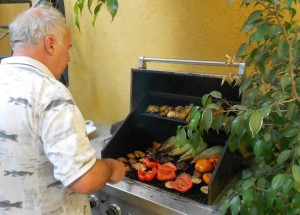 Don makes good use of the professional style grillMy favorite, roast peppers from the grill

When one is house sitting, there’s a fine line in knowing how to behave like guests versus “making oneself at home.”   Is it still acceptable protocol to treat the house as your own, as long as you do so respectfully?  I am going with “yes.”

Not only did the owner of the house where we are staying once work for the leader in professional kitchen appliances, he led international culinary tours all over the world, and now teaches cooking classes in his casa.  Ergo the name “Casa de Cocinas,” as the house has a total of three kitchens, the main one of which is gigantic, and fully stocked with enough gadgets to rival any Crate and Barrel store.   When was I ever going to get the chance to cook on a range with seven burners again? 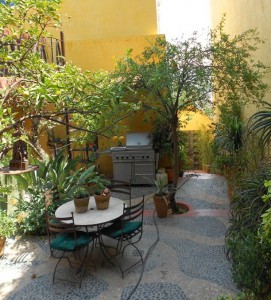 The house has not one, but two giant gas grills…one downstairs, and another on the rooftop.   We chose the one in the courtyard below, so as to dine al fresco surrounded by a tropical paradise of lemon trees, a pomegranate tree, Bird of Paradise, and an assortment of tropical plants…..136 of them to be exact.  (I know, because I counted them during one of the nightly watering rituals.  After all there is no such thing as a “free lunch.”)

Cooking in San Miguel is also enhanced by the abundance of fresh vegetables and fruits available at the markets, or most “tiendas” on the way home from a daily stroll. During our stay here, we enjoyed an array of grilled vegetables and fresh salads from the mercados of San Miguel. 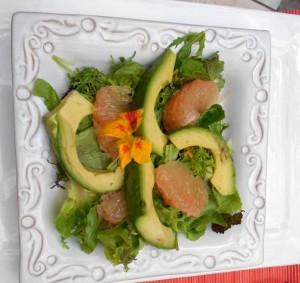 Baby greens, grapefruit, and avocado fresh from the market

Need some fresh herbs for seasoning?  Just head up to the second level terrace where you will find pots growing in abundance….parsley, sage, rosemary and thyme, just to name a few….. 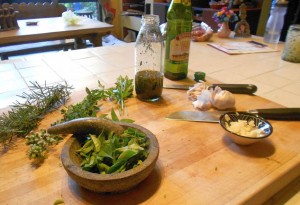 Fresh herbs straight from the garden 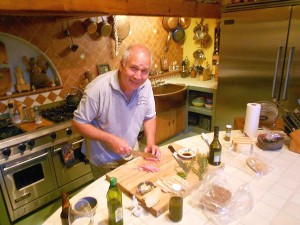 Unfortunately, the camera wasn’t always around to capture all the scrumptious meals we enjoyed in Casa de Cocinas;  grilled rack of lamb and new potatoes with rosemary, rib eye steaks seared to a perfectly juicy medium rare.  It’s just as well, as we scrupulously cleaned behind us with utmost care and respect so as to leave no trace or fingerprints as evidence of “making ourselves at home!” 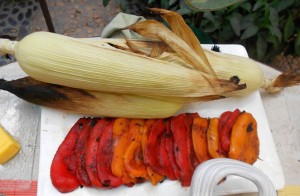 My favorite, roast peppers from the grill