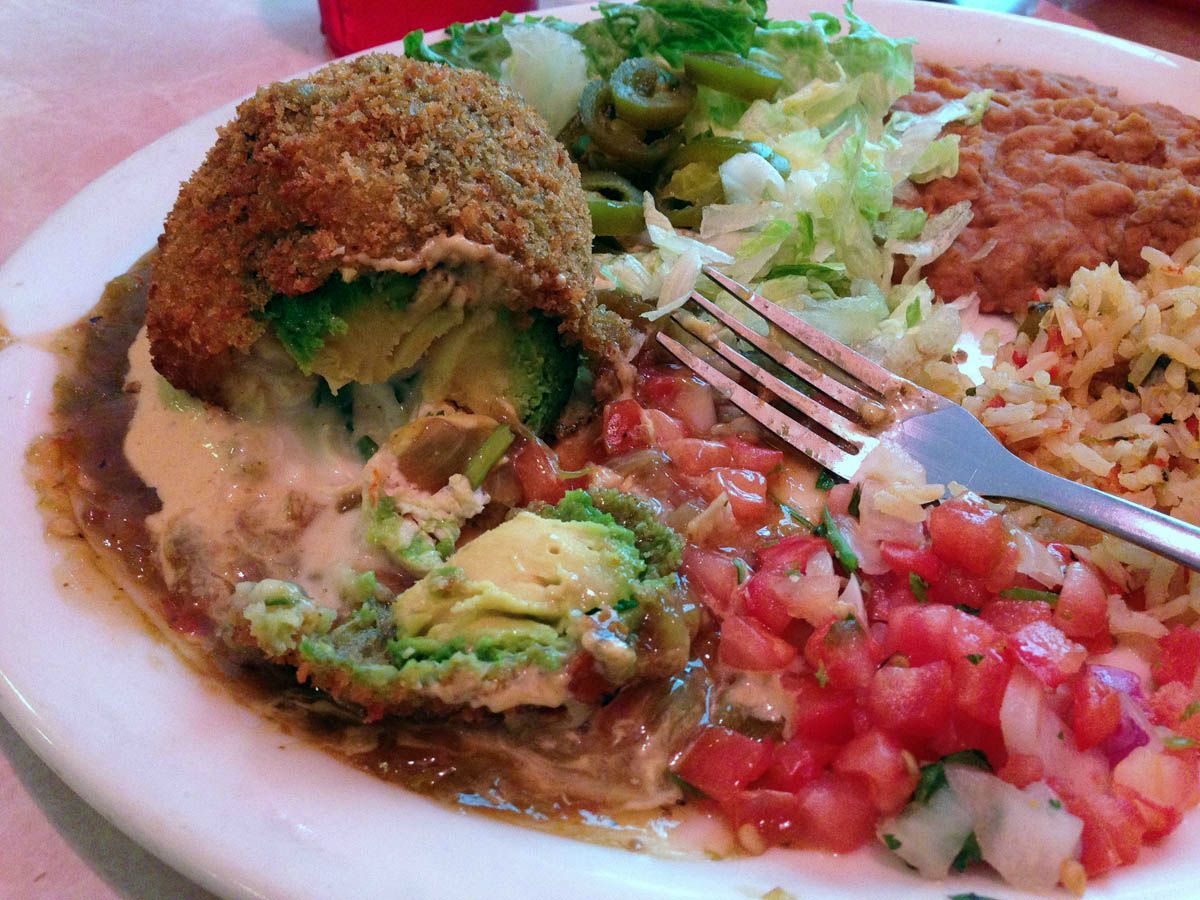 By far one of the biggest treats about my month here in the Pecan Grove RV Park has been the variety of incredibly unique delicious food offerings, from the brew pub over the fence to the long row of inexpensive outdoor dining options along Barton Springs like Shady Grove and Green Mesquite Barbeque (“Smokin’ the good stuff since 1988,”) it was tough to choose between returning for more, or trying a new place every day. 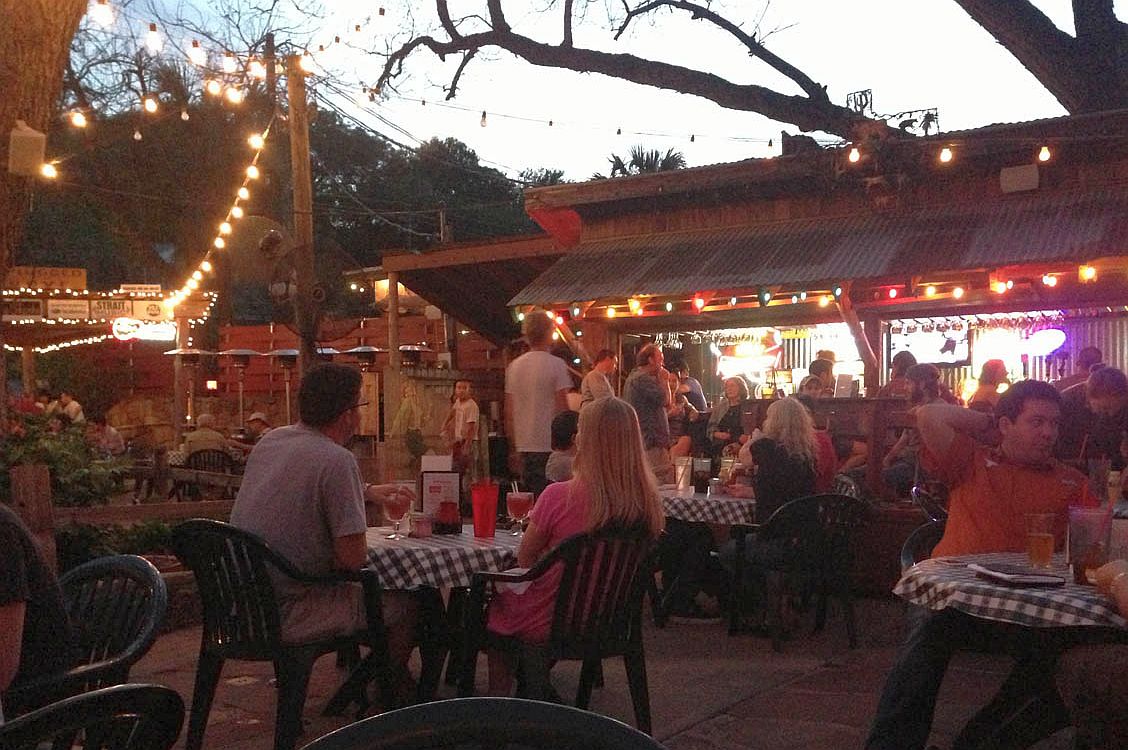 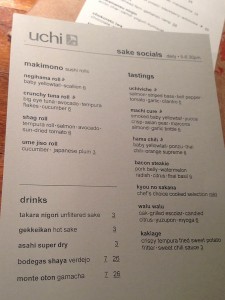 Perhaps the most famous Austin restaurant (at least according to Trip Advisor) is “Uchi,” a Japanese sushi restaurant founded by award winning chef Tyson Cole.  It was without a doubt the best sushi I have ever seen OR tasted!   It ought to be, considering I went there during their “Sake Social” hour and still managed to spend $70! Never mind that  I sampled everything on the tasting menu.  haha! 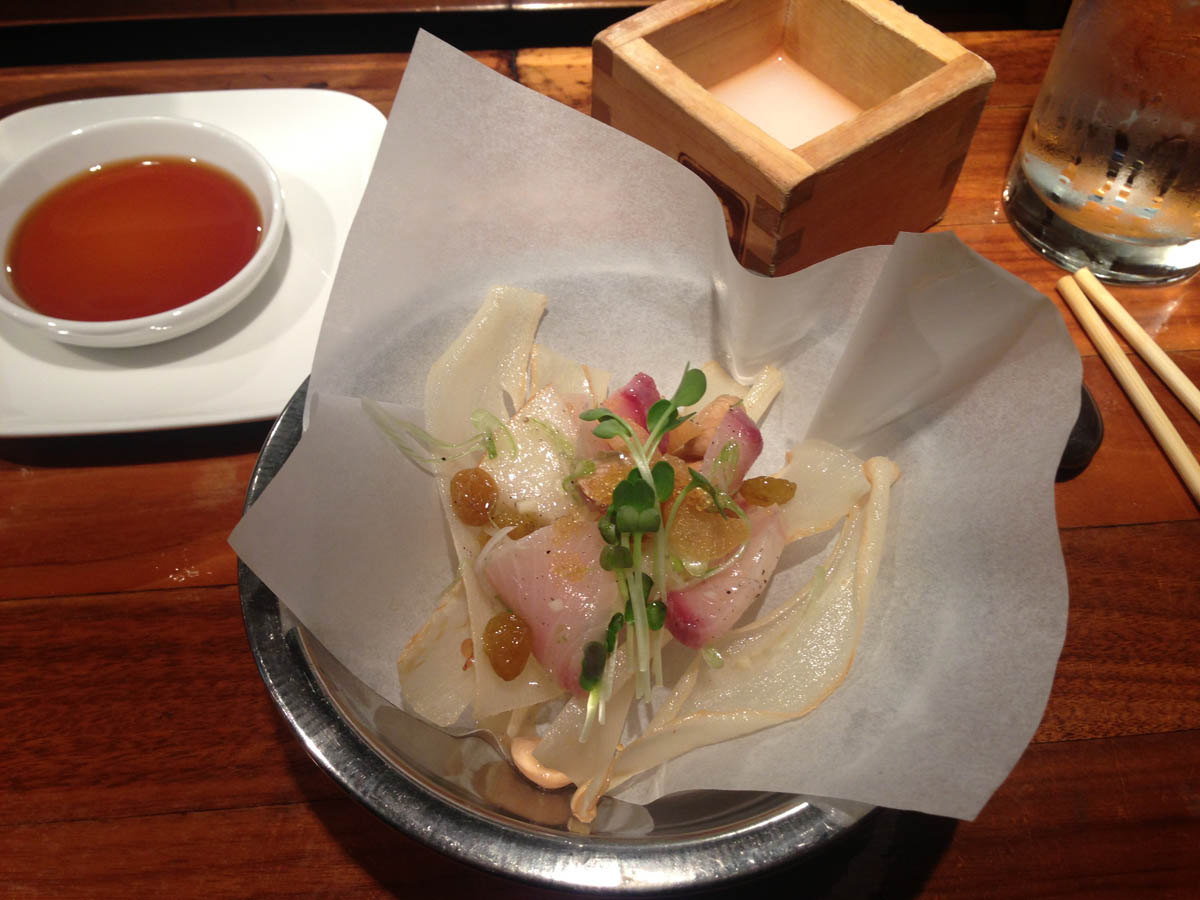 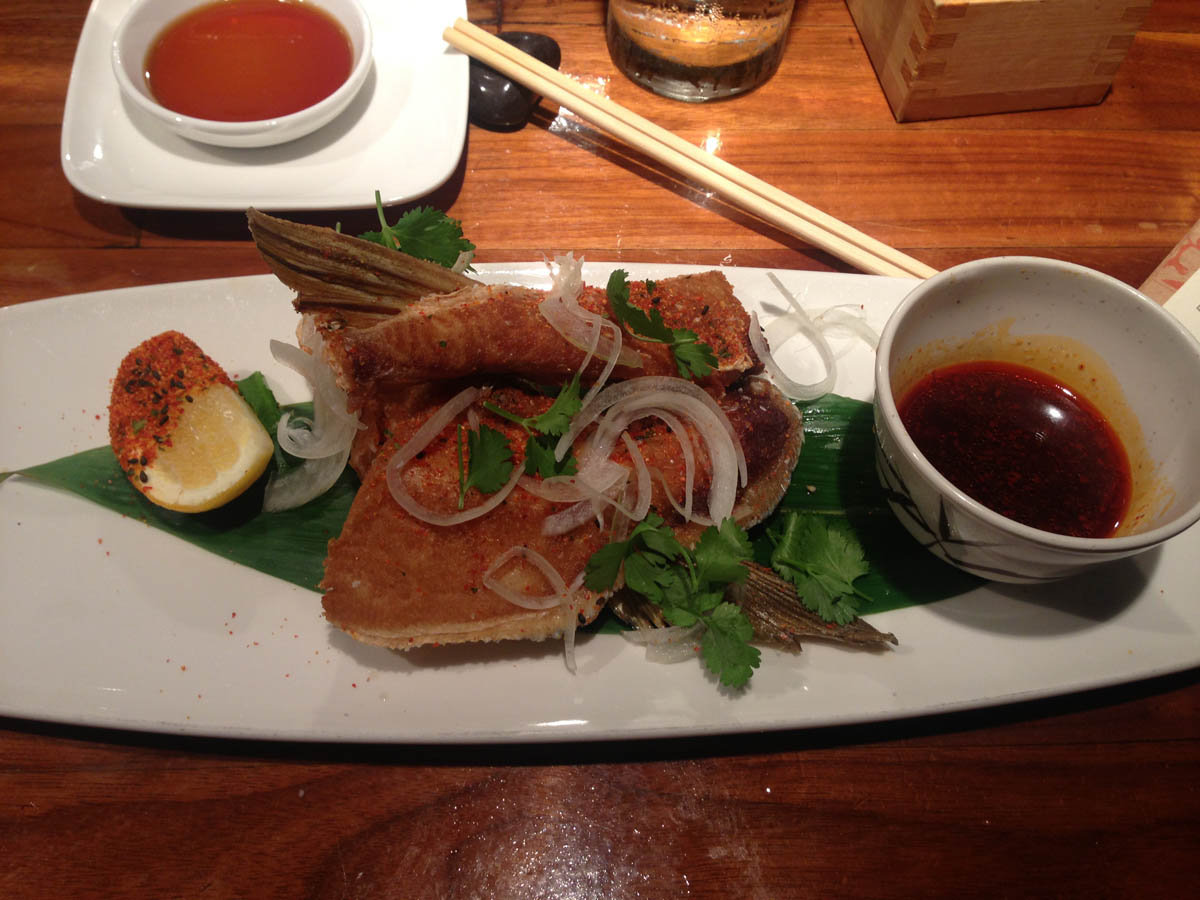 Also enjoyed too many “unfiltered sakes” consumed from little cedar box for added flavor.    Each dish was as delightful and stimulating to the eye as it was the palate. 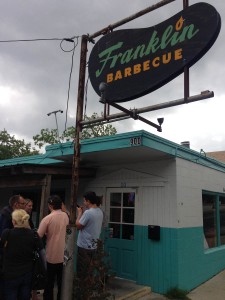 I think my most “bizarre” dining experience had to be the famous Franklin Barbeque.   Not bizarre in a food sense, but in the fact that there is a two and a half hour wait to be seated, every single day.  For lunch!!    They sell out every day. It sounded so crazy that I had to see what all the fuss was about.

The best part by far was the brisket and the ribs.  Those two were worth standing in line for, but not the rest.  “Meh” potato salad, Mrs. Baird’s white bread, and run of the mill cole slaw.   So it’s all about the meat.   The sausage was good, but the casing was too tough for my liking. 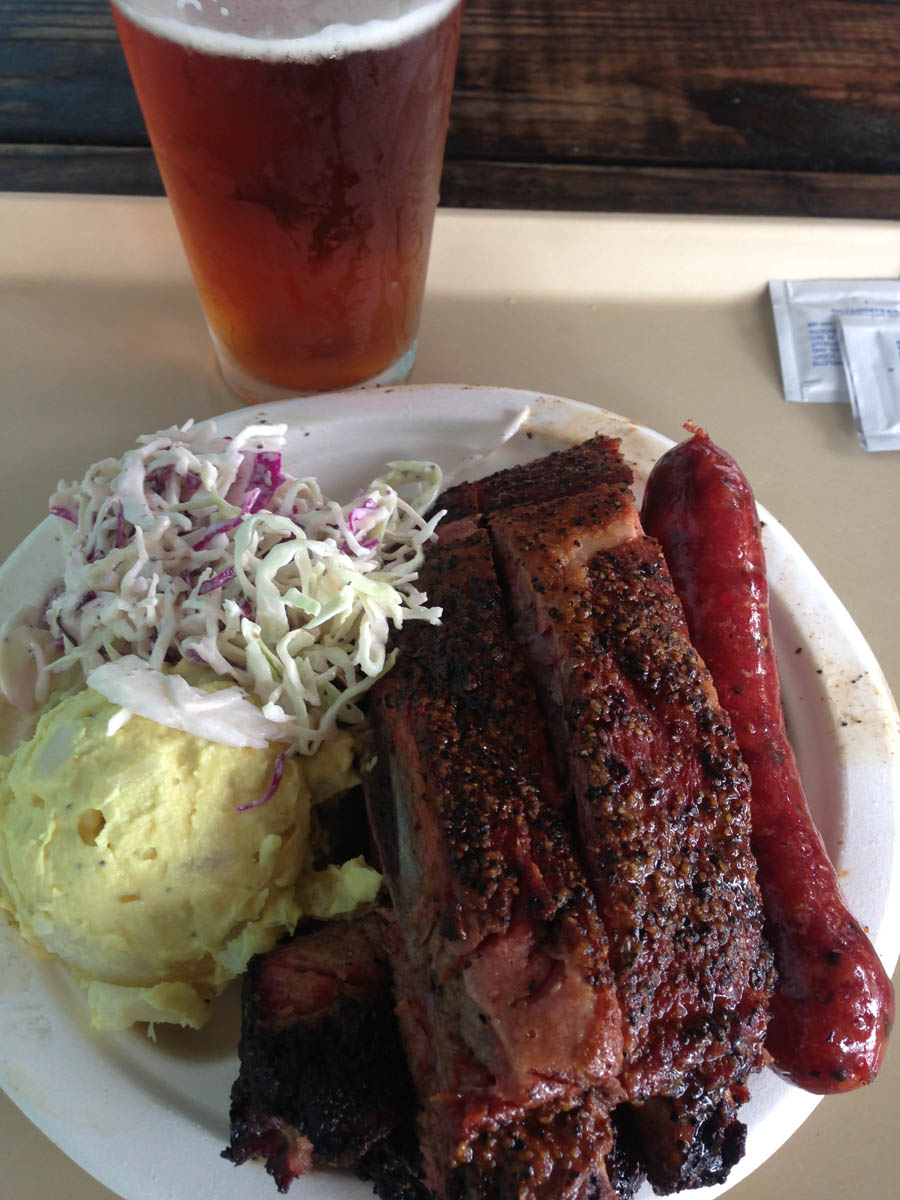 But the ribs and brisket??  Yeah, probably the best I have ever had, and being a Native Texan followed by 10 years in Georgia, I have eaten a LOT of “que!”    I picked up the rib by the bone-end, and the meat stayed on the plate.  Literally fell off the bone.  And the brisket was so tender it was like the fois gras of filet!   Succulent, tender, and delicious!  They use some kind of peppery rub, and then fold the meat in a brown parchment.  It gets smoked inside the paper.  I think that must be what makes it so tender and juicy. 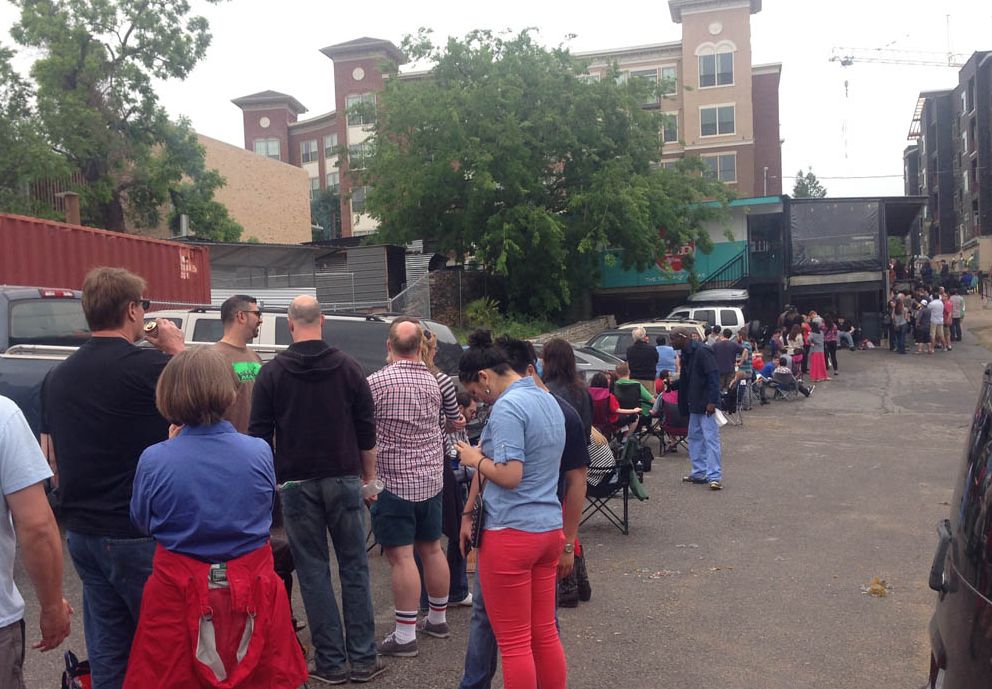 The lunchtime line for Franklin Barbeque, which started out as an Austin food truck.

They have it pretty well set up for such a long wait.  They don’t take your order, but they do come down the line giving you an estimated wait and ask you what meats you will be ordering so they can give the likelihood of running out.   They walk the line with cold beverages for sale — beers only $3.The line is so long there is even an entrepreneur across the street, “Chair Guy” who rents folding lawn chairs for five bucks. 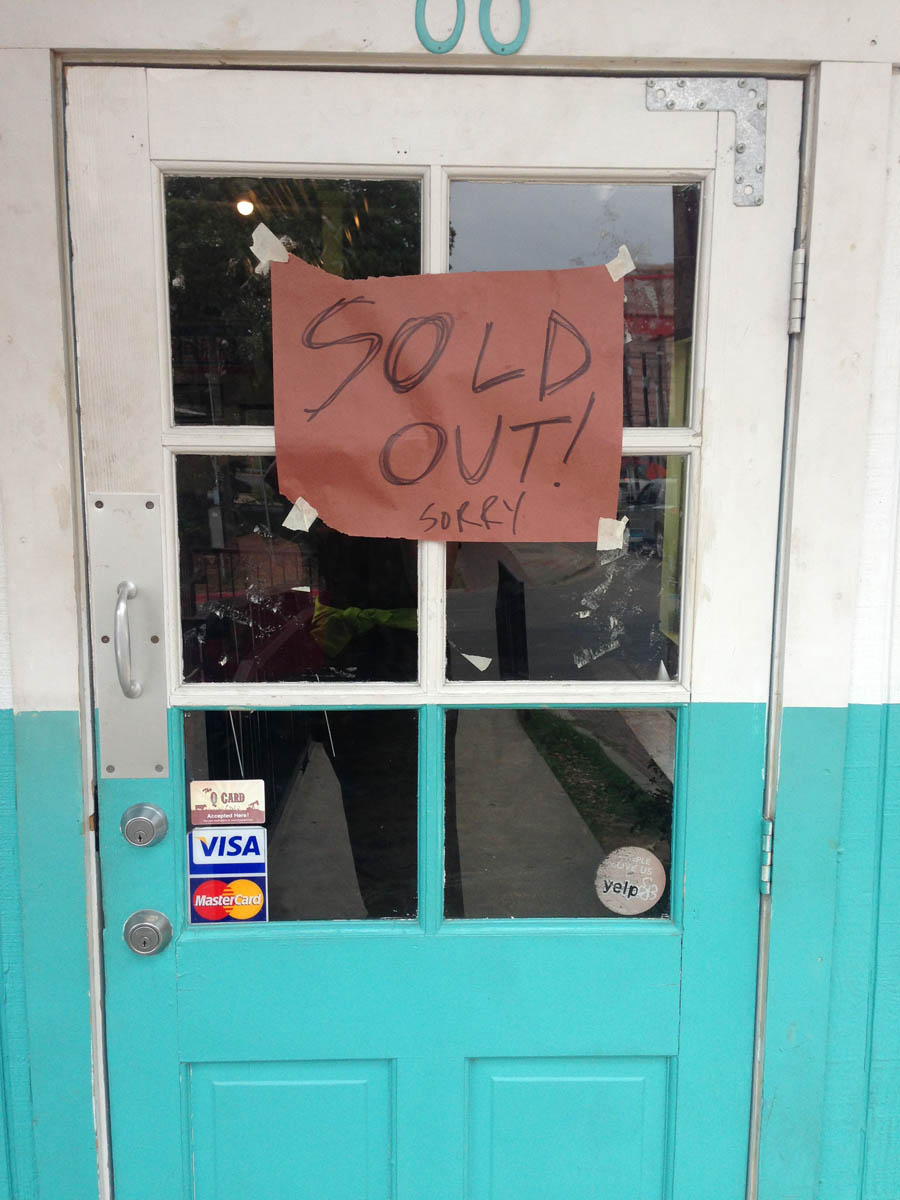 Even the movie theatres have great food!   I enjoyed a night lounging in a recliner at the Violet Crown, feasting on their Mediterranean platter, best substitute for buttered popcorn ever offered!   Didn’t even matter that the boring movie sucked, the food was worth it! 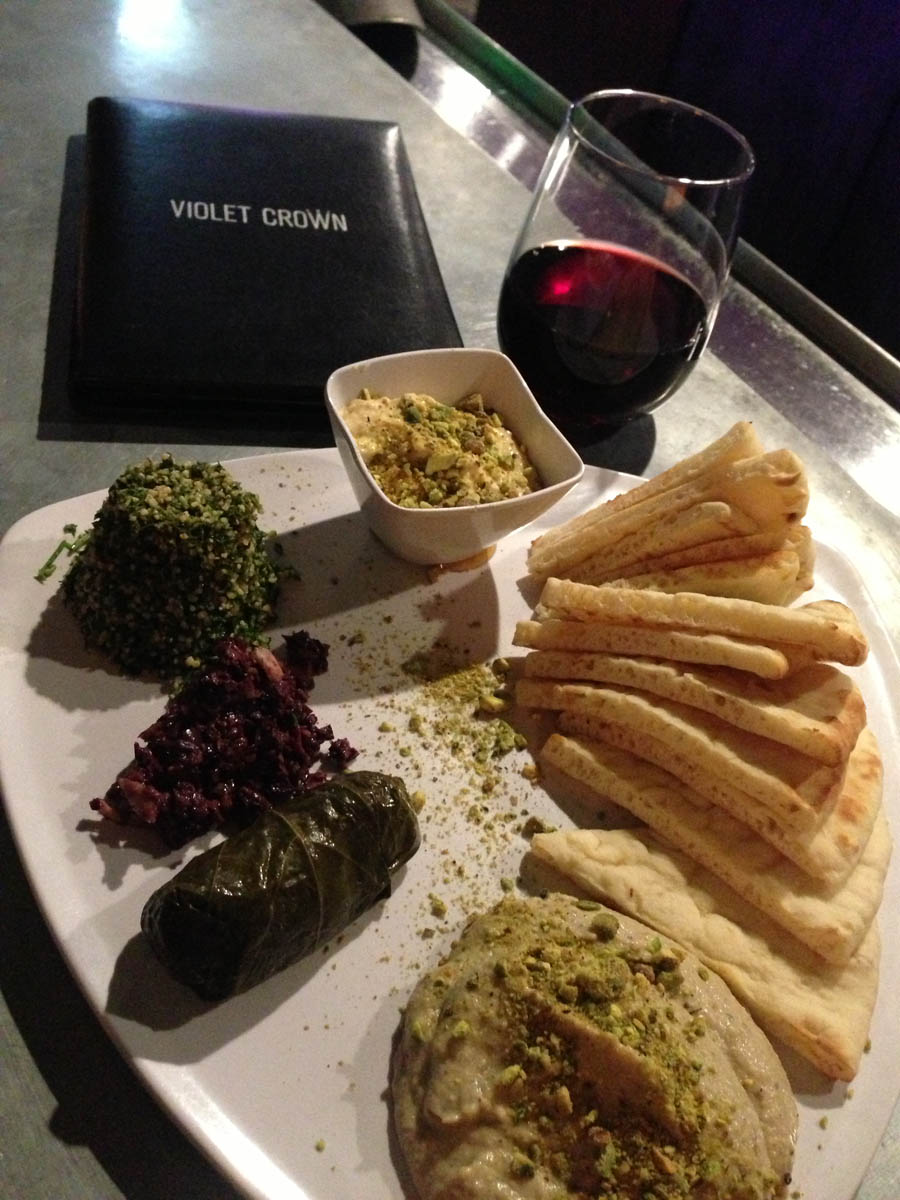 And last but certainly not least, the amazing food trucks everywhere you go!  You are never more than a block from delectable delights such as pineapple fried rice, Indian curry, or nothing but cupcakes… 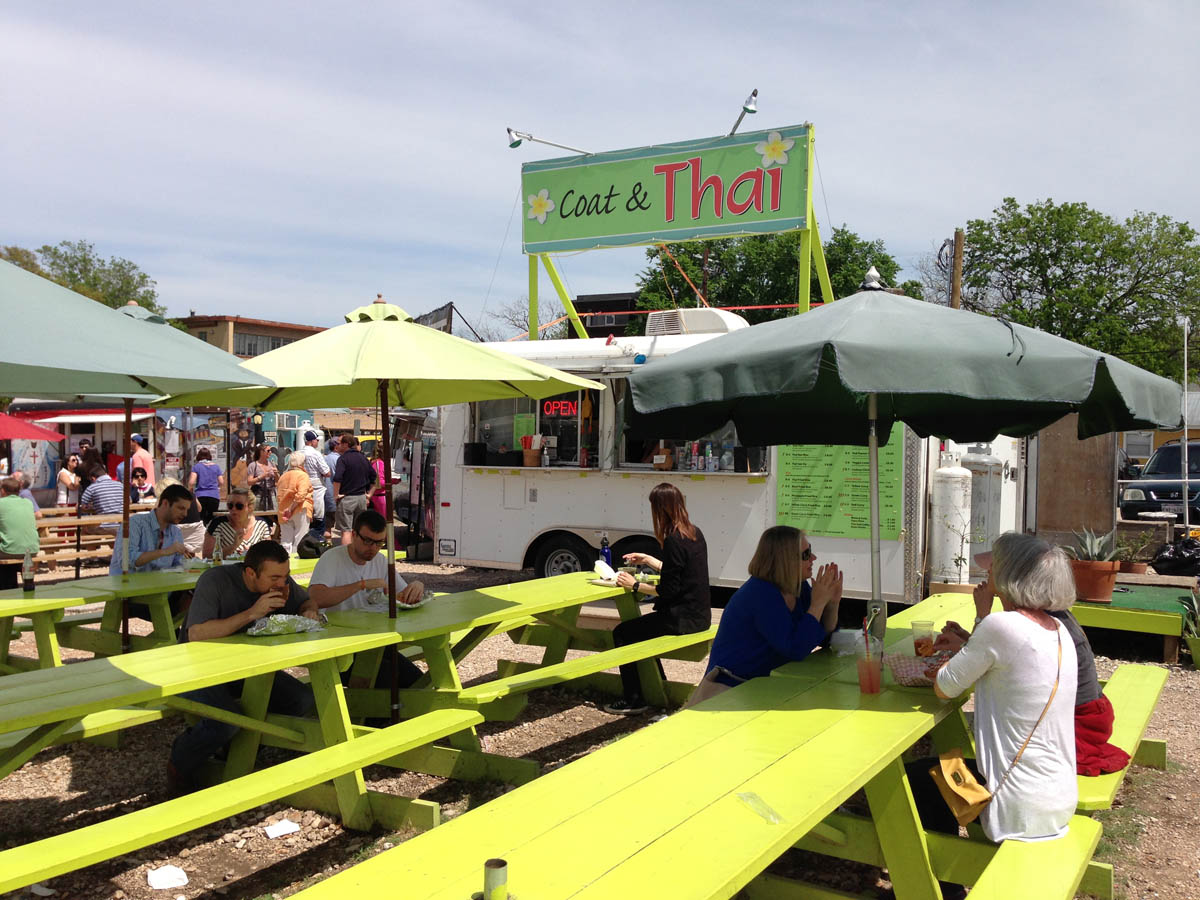 …or the evil “Gourdough’s” who sells unlawful concoctions like the “Flying Pig,” bacon with maple syrup icing on a slab of fried dough. 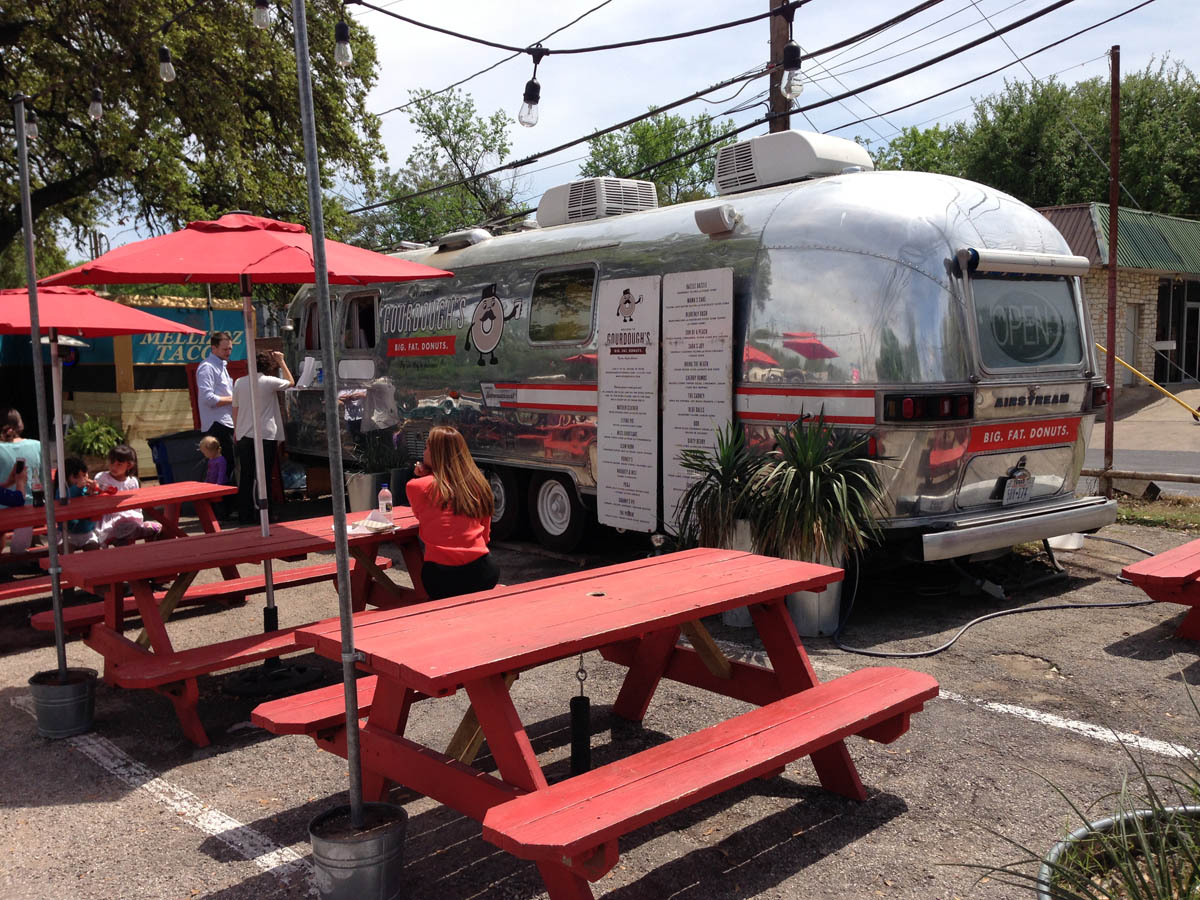 My absolute favorite of all the food trucks was “East Side King,” the food truck founded by Paul Qui, of Uchico sushi restaurant and Top Chef fame.    As far as food truck food goes, I can’t imagine anything more delicious.  My eyes were rolling back in my head and I was moaning at the picnic table.  Too much food, but I had to try it all!   I had the fried chicken thigh in sweet and spicy sauce, the deep fried roasted beets, and the Brussels sprouts salad, all covered with Thai basil, cilantro, and fresh mint.   My oh my, just ridiculously good! 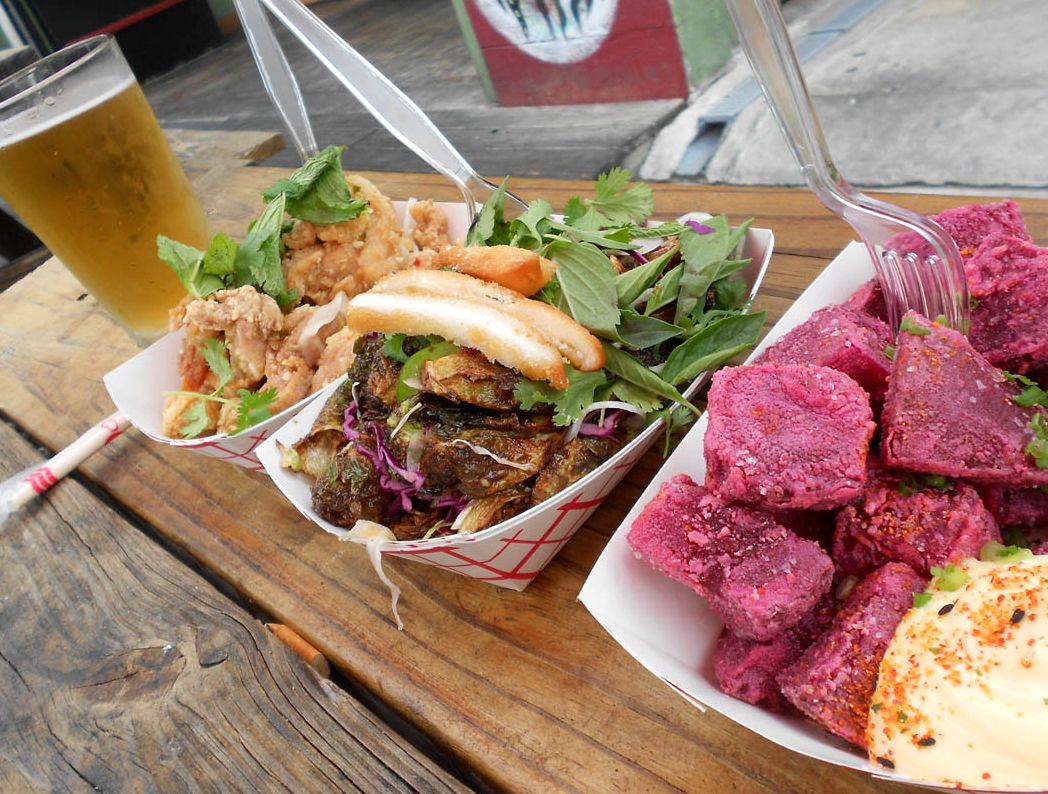 There is a lot of shoving going on where the food truck vendors are concerned, as the city paves paradise and makes way for obnoxious egg-crate condos and gentrified hotels.  I sure do hope the trucks  win the war, as it is what “Keeps Austin Weird.” 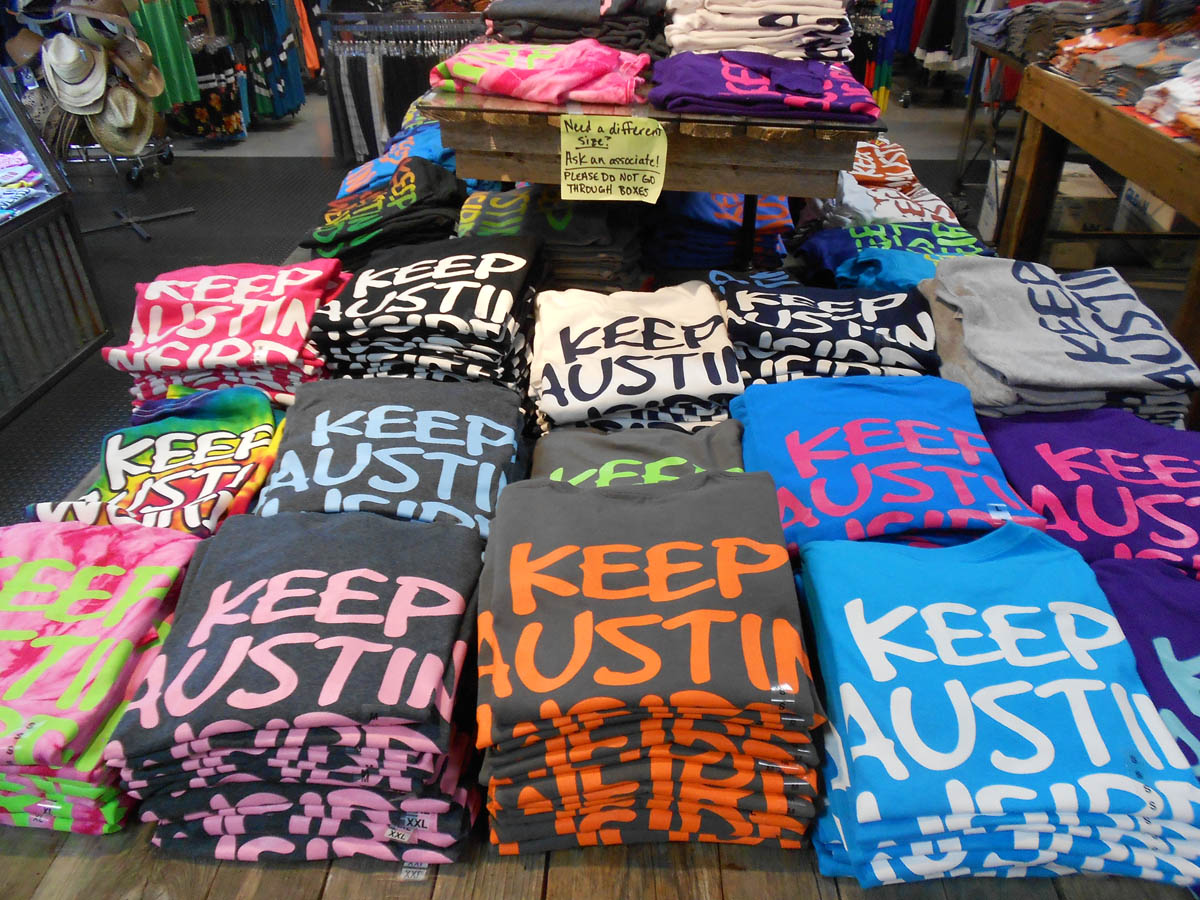 At what point does the marketing kill the concept?