It was a cold, blustery day yesterday in Austin.  Down to the low 40’s with a stiff 20 mph north wind.   I was determined not to let the weather ruin one of my only two weekend days, so I put on my fleece pants, three layers of shirts/coats, fleece gloves and hat, and walked for almost five hours.  I have decided I have just got to come to terms with this weather like I did while living in New York, because it does not appear that it is going to change any time soon. 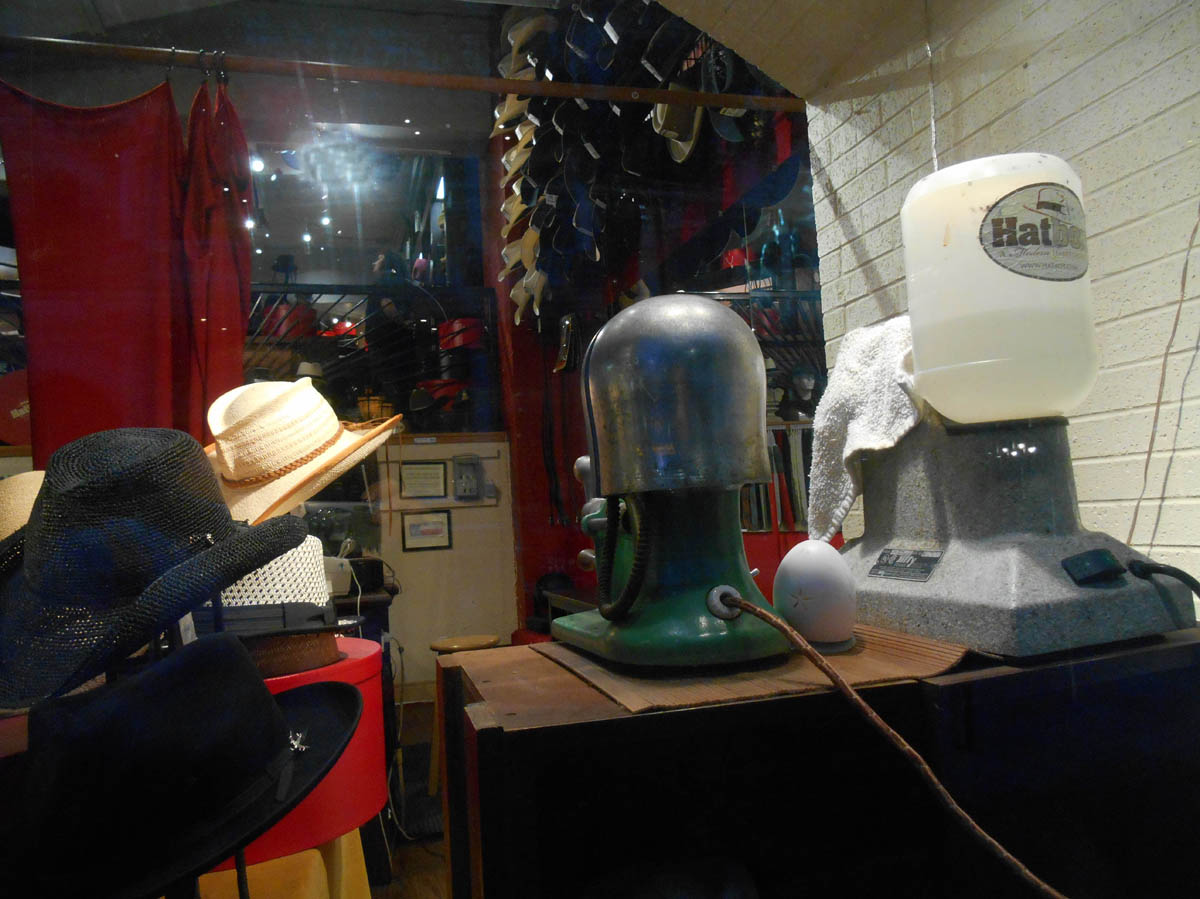 I received a very kind invitation to attend a Super Bowl party from my friends Monica and Derek of roadmaptonomad fame.   We met when I was here last April, as they were also full-timing here in Pecan Grove.   Due to work constraints, they had to come off the road temporarily, but still live in the Barton Springs area.  We seem to have a lot in common despite our age difference, so I have enjoyed their company while here. 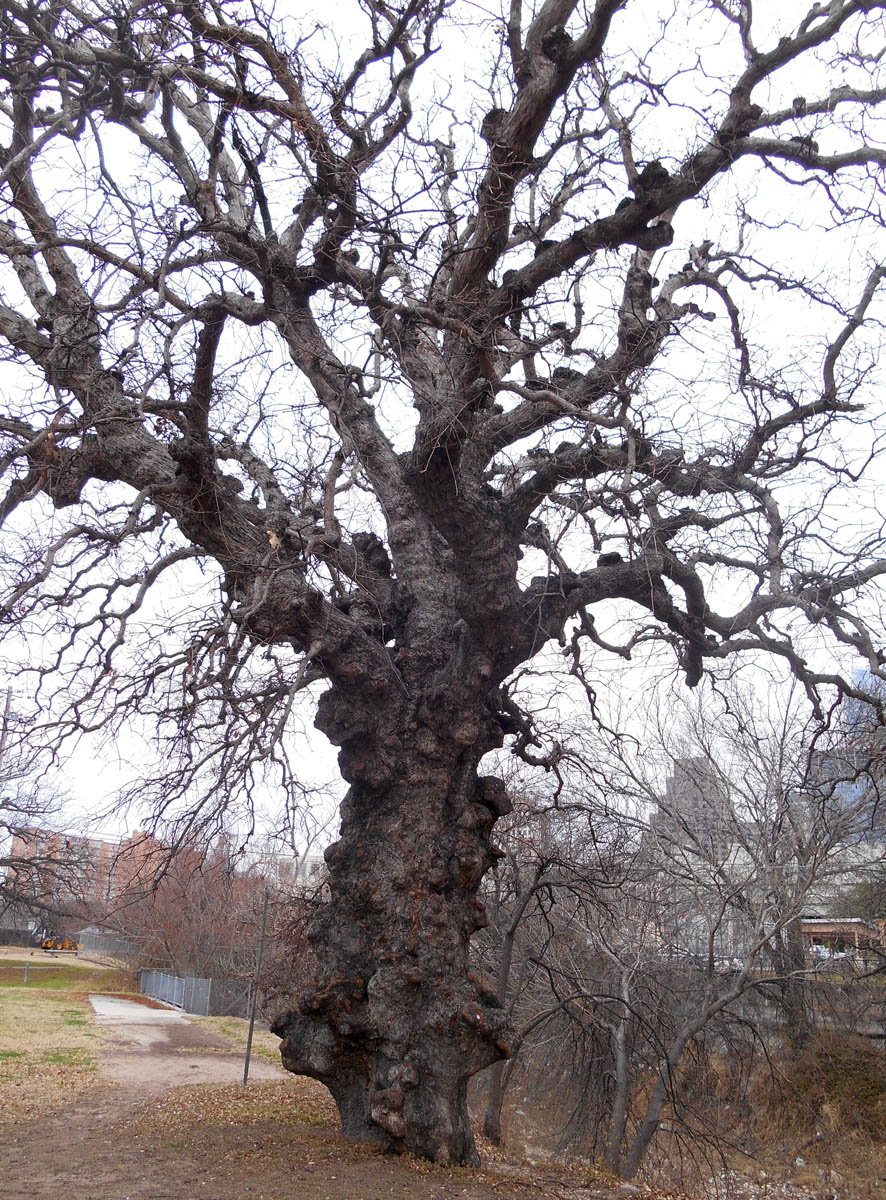 But with all due respect to my football-loving friends, I am not a fan.  I was married for 8 years to a man who worshiped at the altar of the pigskin, and just the sound of those words:  “HE!  COULD!  GO!  ALL!  THE!  WAAAAAAYYYY!” makes my stomach hurt.   So I set off for a long walk to enjoy the atypical deserted downtown streets and quiet of the city.  With no particular destination in mind, I found myself at the doorstep of our State’s Capitol, a place I had not been since my Freshman year of college over 40 years ago. 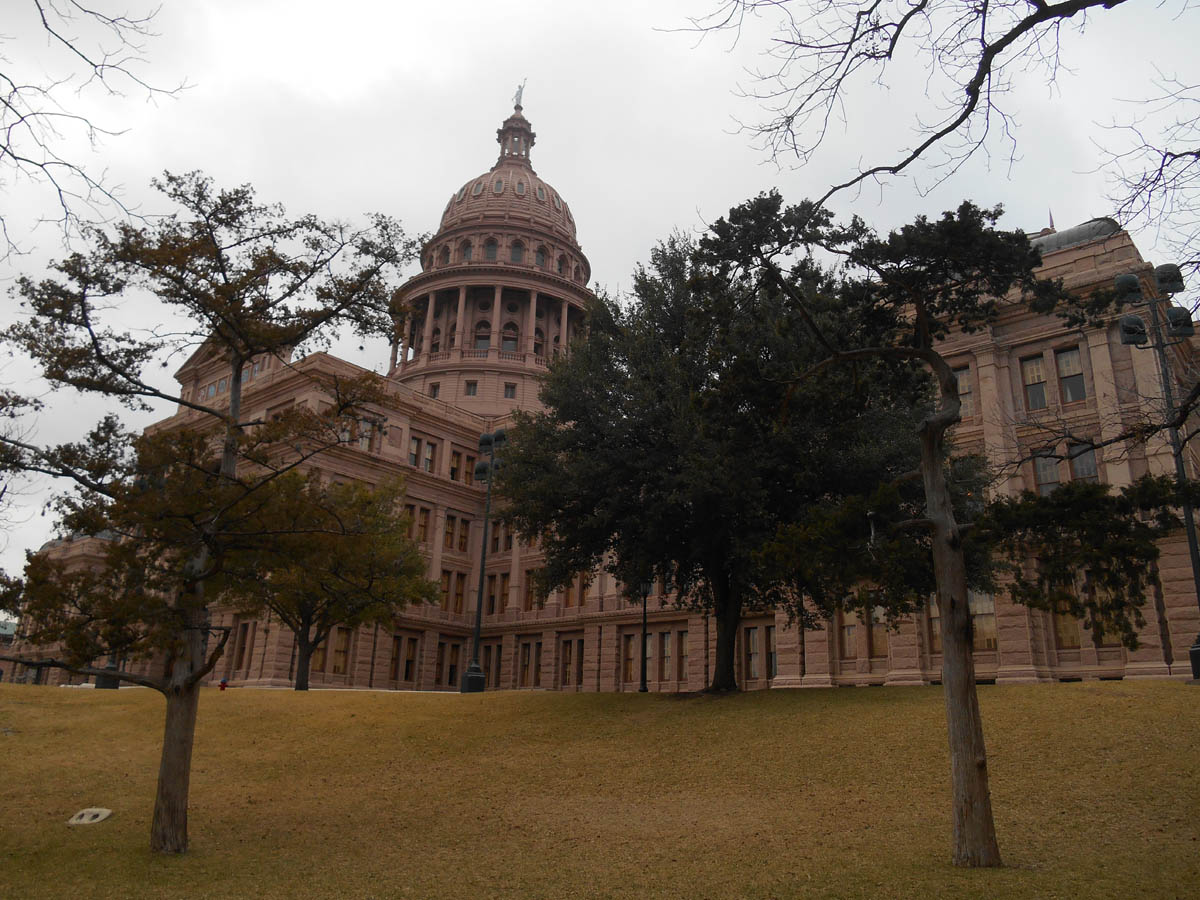 The pink granite building, finished in 1888, is actually seven feet taller than our nation’s capitol, and reportedly the largest of all state capitols in terms of acreage.  Figures, right?  It’s Texas.  😉 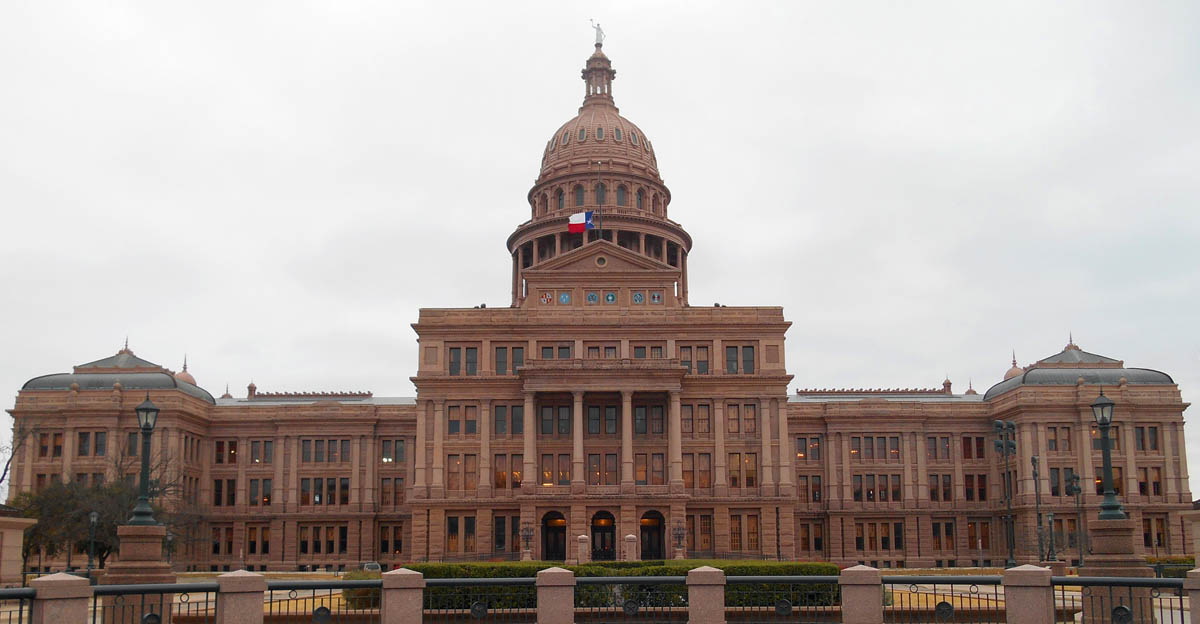 The  218 ft dome covers the giant rotunda with a star at the top, 8 feet across.  The walls of the first four floors are lined with portraits of every President of the Republic of Texas or Governor of Texas, starting with the current embarrassment, Rick Perry.   Each time a new governor is elected, every portrait has to be moved back one space.

It is pretty telling to stand in the rotunda and look at all the portraits surrounding me.  “Which one is not like the others?”   As I circle around the room, I see one stodgy old white guy after another.  And then, in the upper right third of the photo below, there is Ann, her snow white hair and Democratic Blue suit, representing.  I hope she gets some company soon.  😉 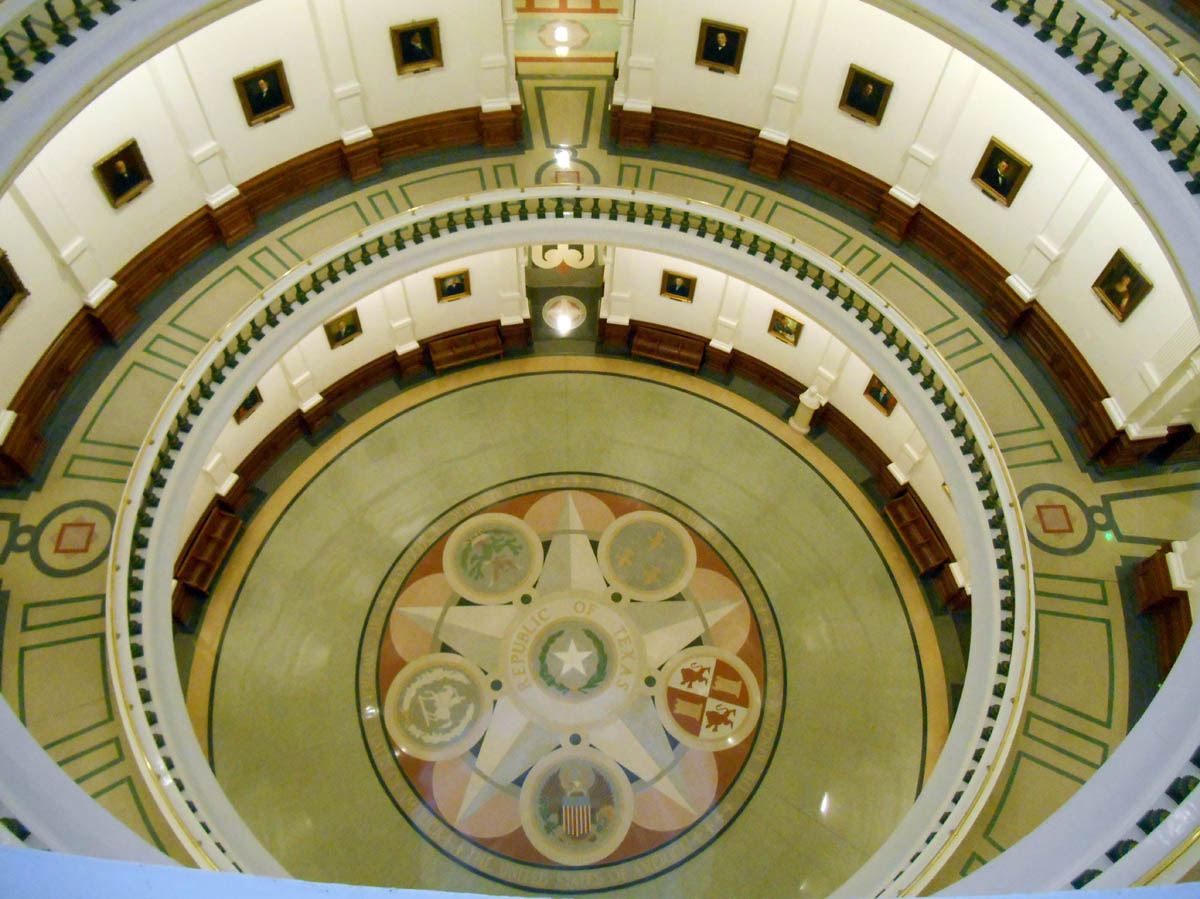 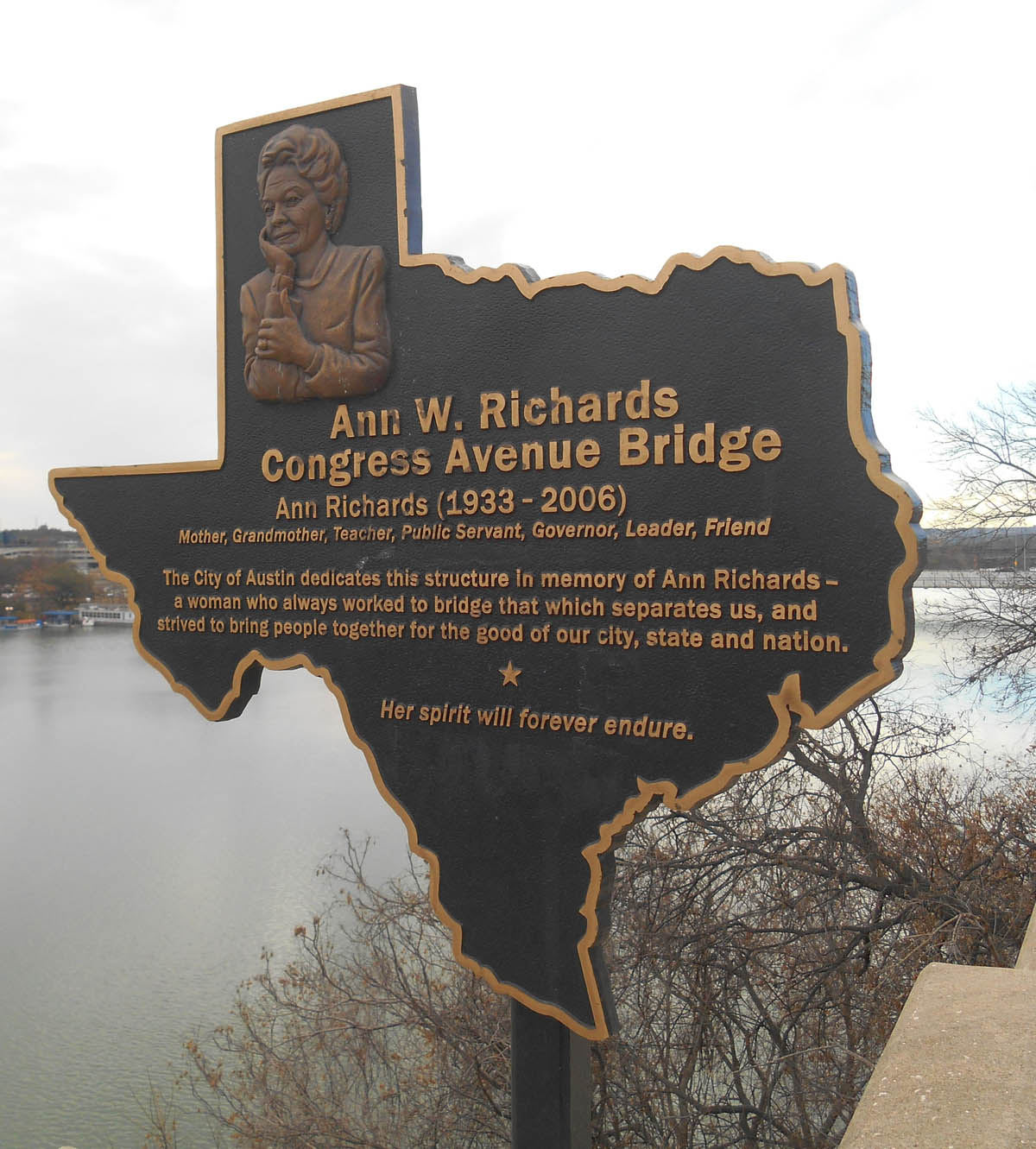 It is interesting to see that we are finally recognizing our “roots,” too.   Two years ago, a massive 250-ton monument was built to pay homage to the Tejanos, the original cowboys.  These Mexican and Spanish settlers and their longhorn cattle were here LONG before “we” arrived. 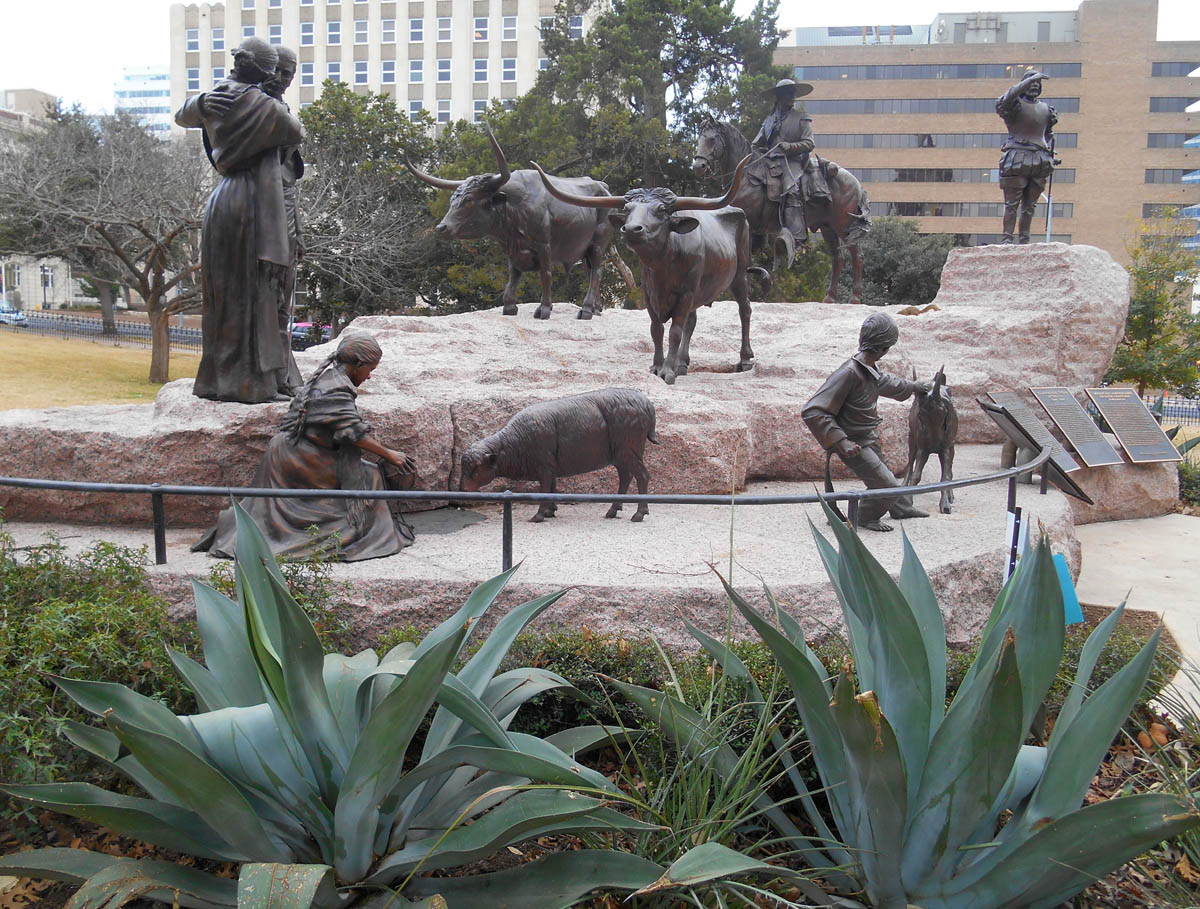 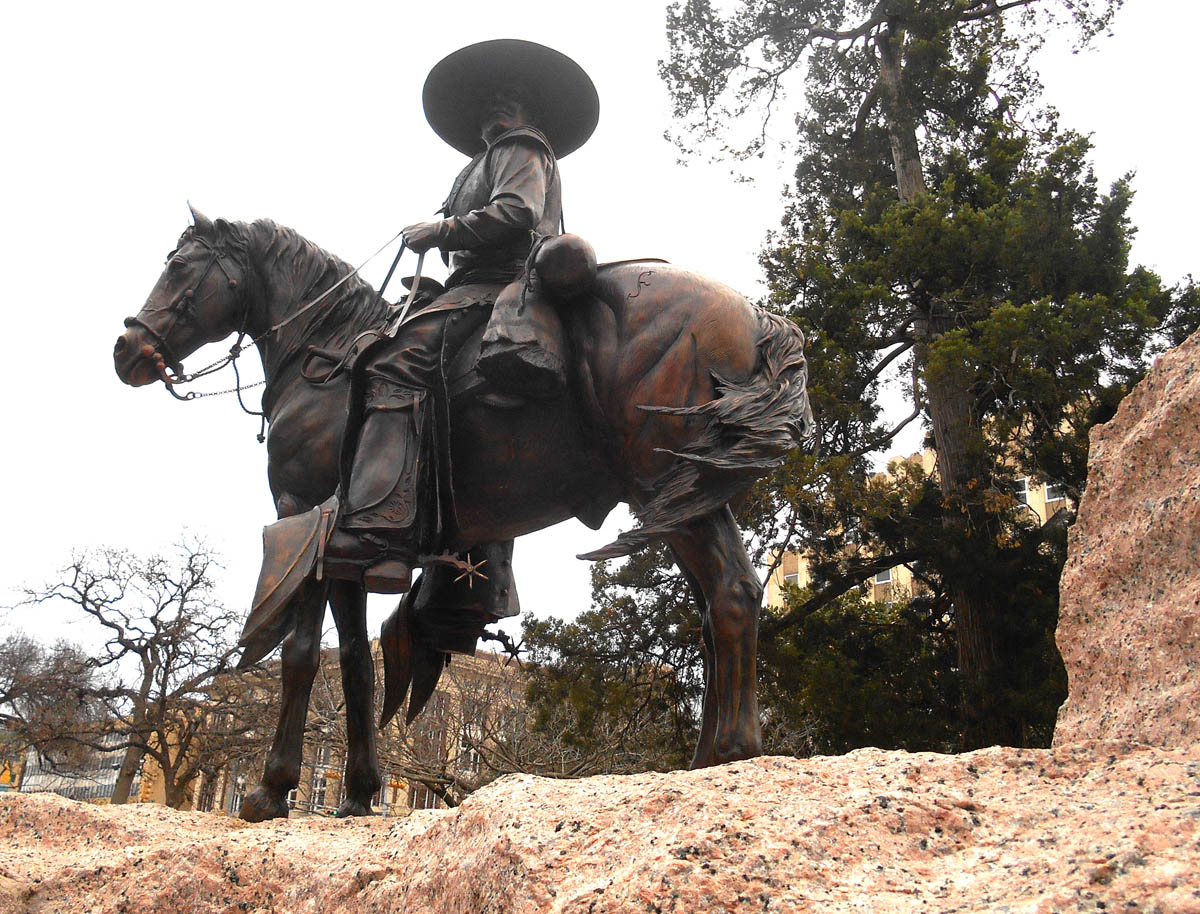 Now there is one bad hombre!  Whew!  Glad things have changed over the years….or have they?

As I was leaving the building, I had the following conversation with the Security Guard:

Me:  Excuse me sir, can you please tell me why the flags are flying at half mast?
Him:  Yes, Ma’am, we are celebrating a sniper.
Me:  Excuse me?  You mean a sniper, as in someone who kills people?  Which part are we celebrating?
Him:  We are commemorating the anniversary of his death a year ago, Ma’am.
Me:  That seems contrary to me.  If a sniper is dead, shouldn’t we be relieved, not mournful?  If he was a sniper, shouldn’t we be mourning the lives that he killed, not celebrating?  I am confused as to why we would want to celebrate this?
Him:  Well, Ma’am, he was the greatest, most celebrated sniper of all time!  He killed more people than anyone in our history..

Okay, I think I’m done for another 40 years…

10 thoughts on “On Super Bowls, Statehood, and Snipers”