After sitting parked in my parent’s driveway for two weeks, I was getting a bad case of “driveway fever.”    There are only so many trips down to the local Walmart, or through the many fast food drive-thrus lining the main street of our 5,000 resident town that I will allow myself to make.    And my dear parents mean well, but it is hard to resist the evil temptations when Dad makes his daily run to the local donut shop or fried chicken shack.

I also get a sense that my presence disrupts their normal routine, as they confess to concerns that my Saturday morning sleep-ins might mean that I have fallen prey to carbon monoxide poisoning.   Or my Dad’s comment that the food I prepared was “still raw.”  😉

With my Mom’s cataract surgery now pushed out until mid-Feb, I decided to make a run for it.   Not too far that I can’t get back in time for the surgery, but far enough to find an infrastructure that will allow me some entertainment, healthy eating, and a venue to get outdoors.    Where better than to return to the place where it all began, Groovin’ in the Grove! 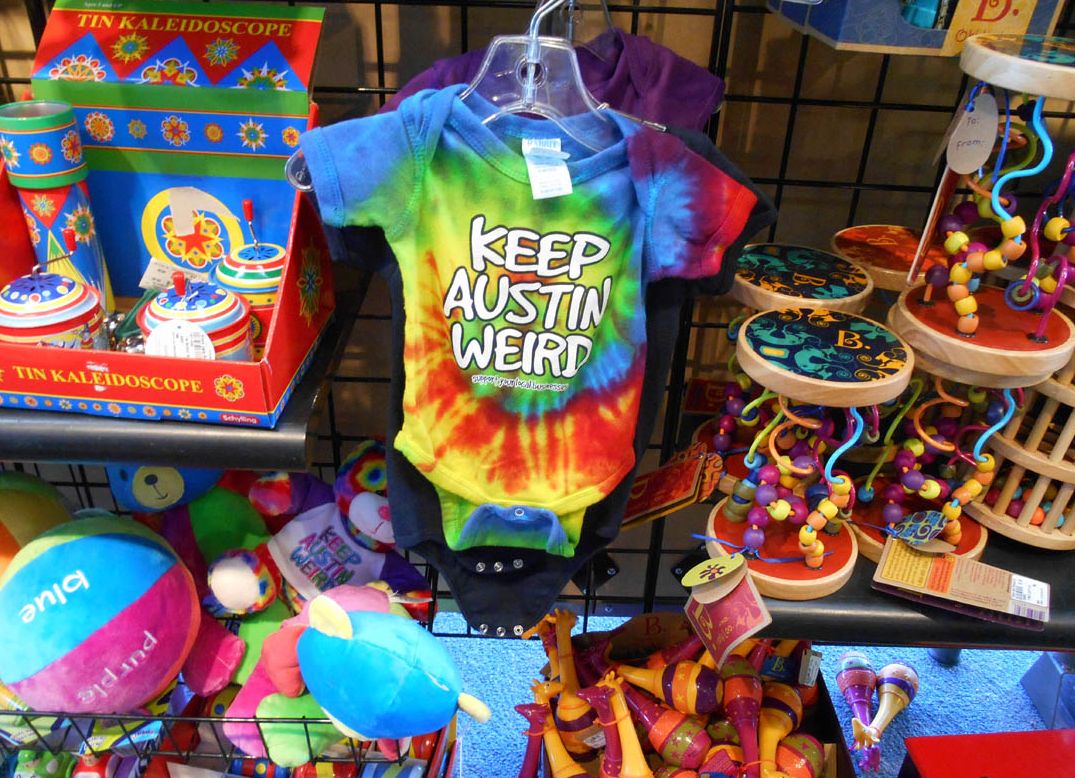 Last March, I started out on my first full timing adventure, spending a month in Austin.   It was a proving ground of sorts, where I would test out my rig. This being my first RV, had I bitten off more than I could chew?    Would it be big enough that I could work inside for 8 hours without feeling the walls close in, yet small enough that I could feel comfortable maneuvering solo? 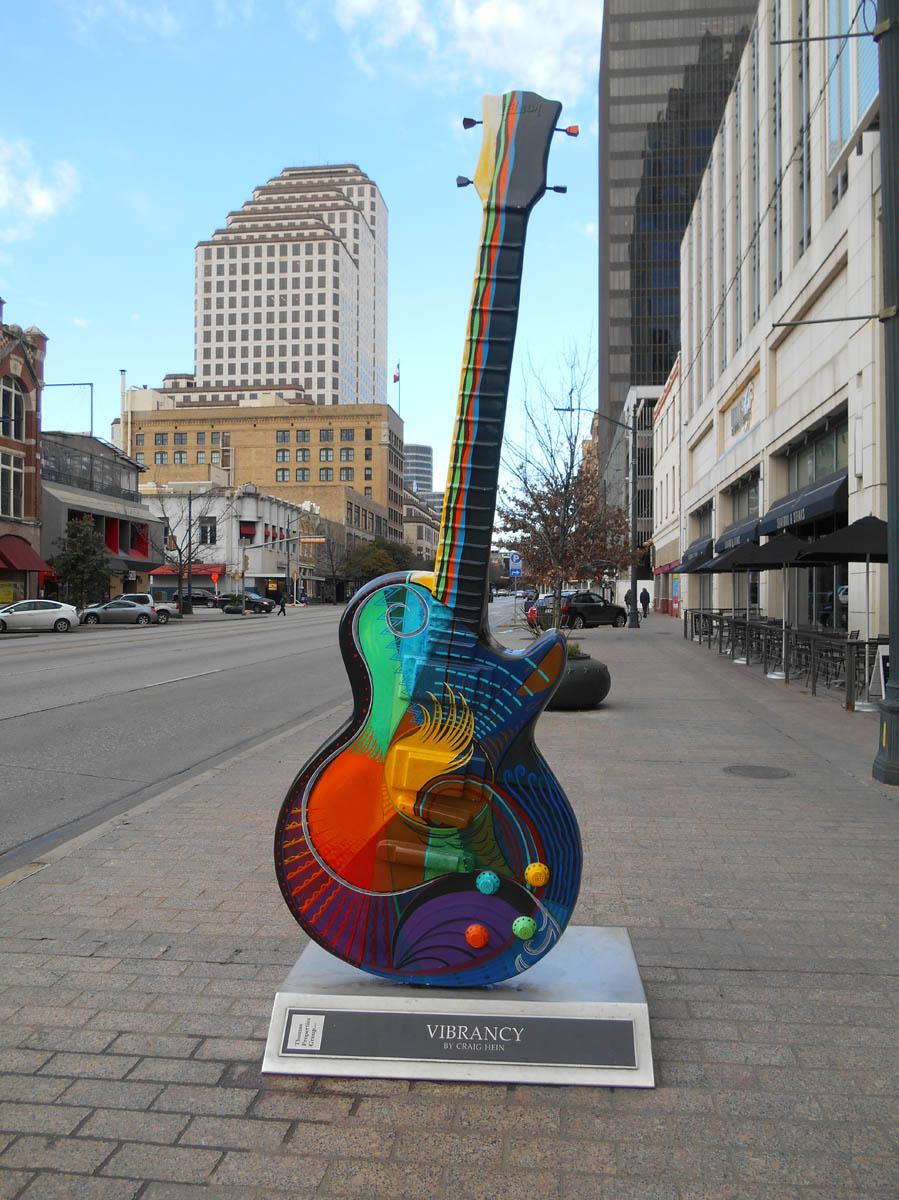 Every day was a learning experience as I had to ask the man at the front desk about the “city adapter” they required for sewer hookups, which meant I had to confess I had been “holding it” for three weeks.   I needed to get the bugs out of my MiFi, VOIP phone and router systems to see if I could actually take my virtual job on the road.   And figure out how to solve problems on the fly….like hail storms during conference calls!   Austin was the perfect venue….not too far from home if my new lifestyle failed miserably, yet far enough that I couldn’t go running back at the first mobile office obstacle, of which there were many.  But one by one, I worked through them with my technical support team (brother Don) and before I knew it, the month had gone in a flash, and I was ready to hit the road. 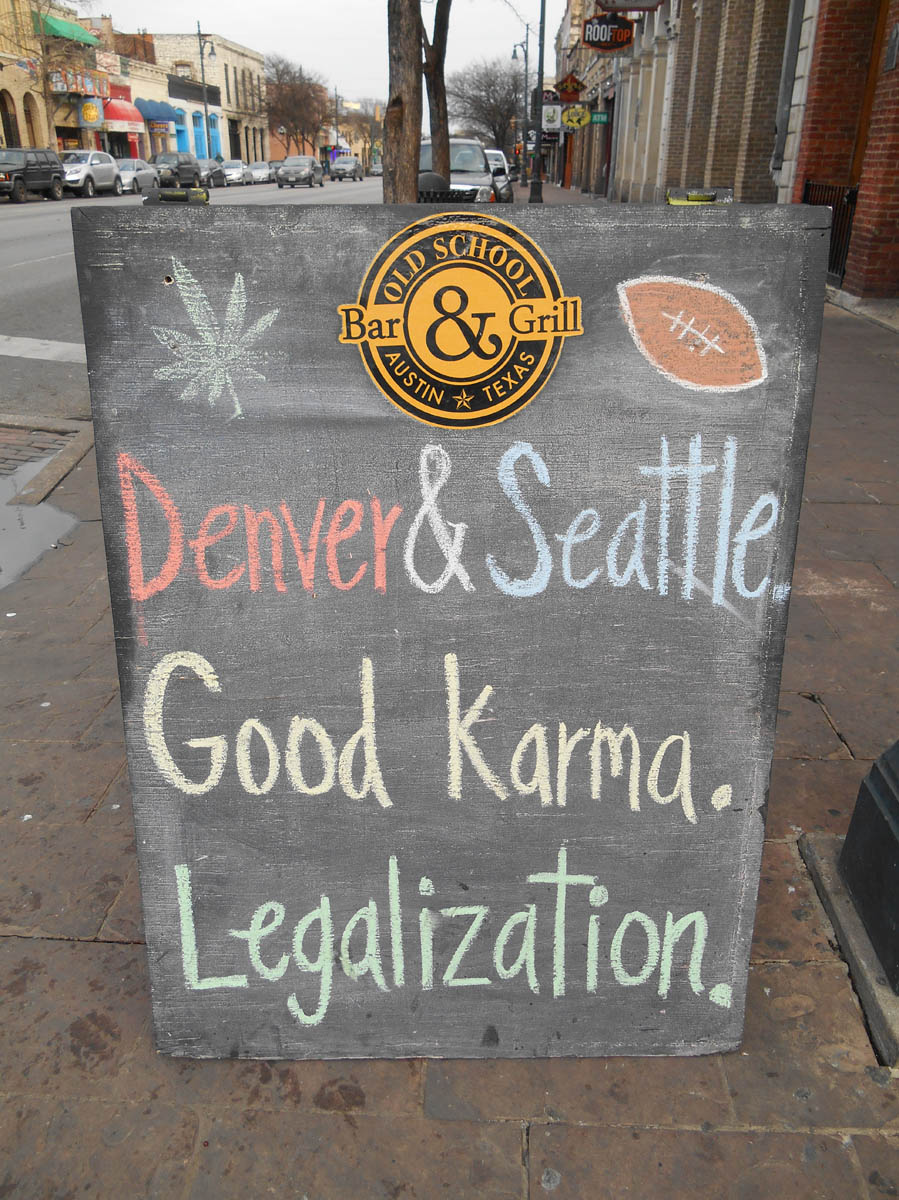 From this point, I would head East toward the Smokey Mountains, loop down through Atlanta and Lake Lanier, then make a five week crawl up through the Outer Banks.  I worked on my dream to visit all the National Parks from Assateague Island to Niagara Falls to the Shenandoah Valley down to Mammoth Cave, KY  to round out the circle.   2013 would end up being the most enriching and fulfilling year of my life, short of my RTW backpacking trip in 2002.  So it seems only fitting that I circle back for a “Dose of Weird” before I head out for the western loop.

Well, for one, there’s a new Ninja painter in town.  And he has a Kung Fu grip, it would appear…which comes in handy when you decide to paint an entire railroad bridge. 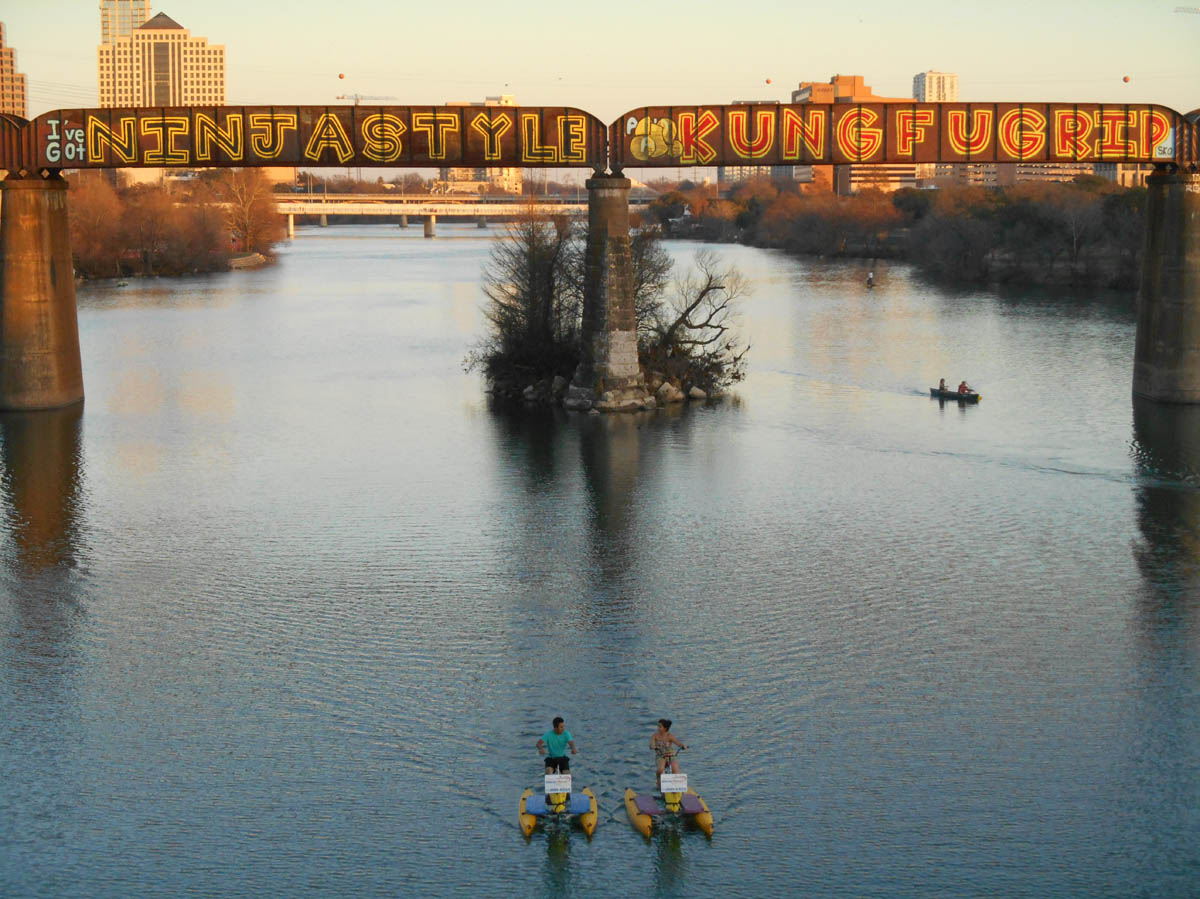 And construction is finished on the incredibly (I-would-say-“awesome”-but-I-won’t-succumb) hike and bike trail that surrounds Lady Bird Lake. 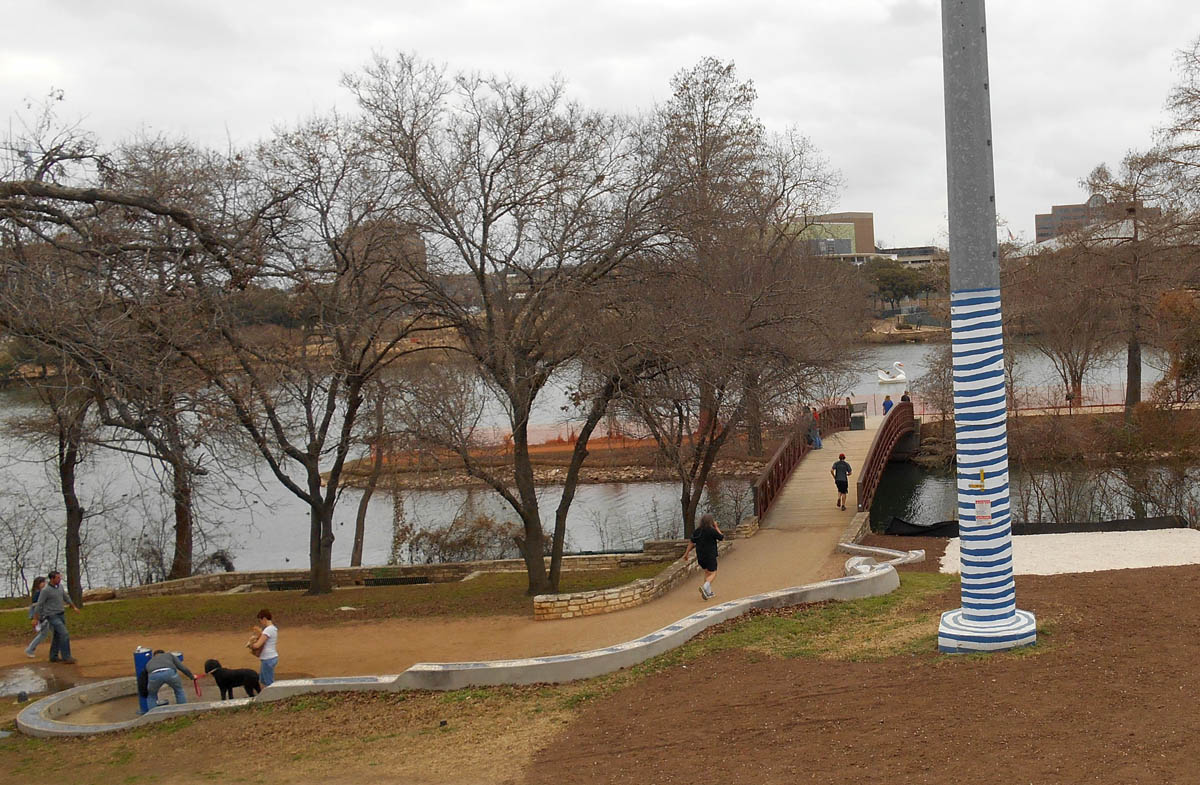 Check out the “swan” at the end of the bridge. 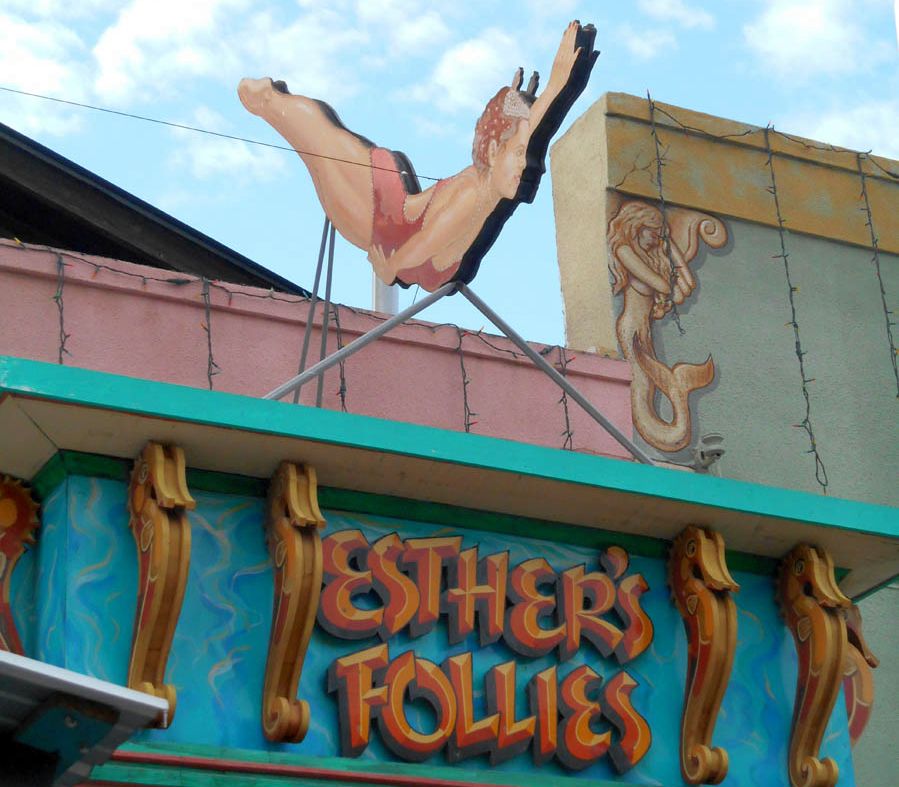 Still hilariously politically incorrect after all these years!

The bats are gone for the winter, but their legacy keeps turning… 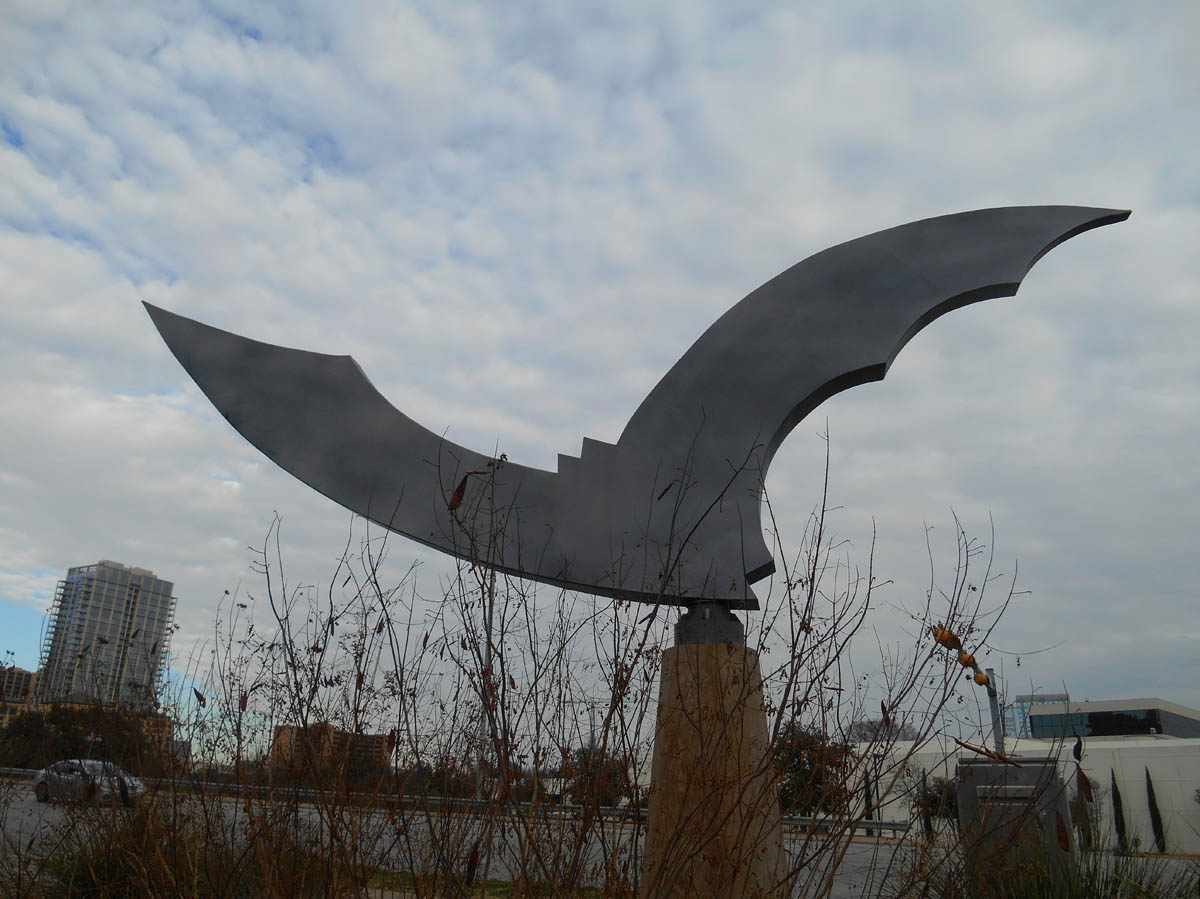 “Nightwing” — What other city would have a statue of a bat? Bats Amore’!

And they followed through on the promise of progress by paving paradise.  All my favorite food trucks  were evicted from South Congress.  Because goodness knows, what Austin needs is a few more concrete high rises. 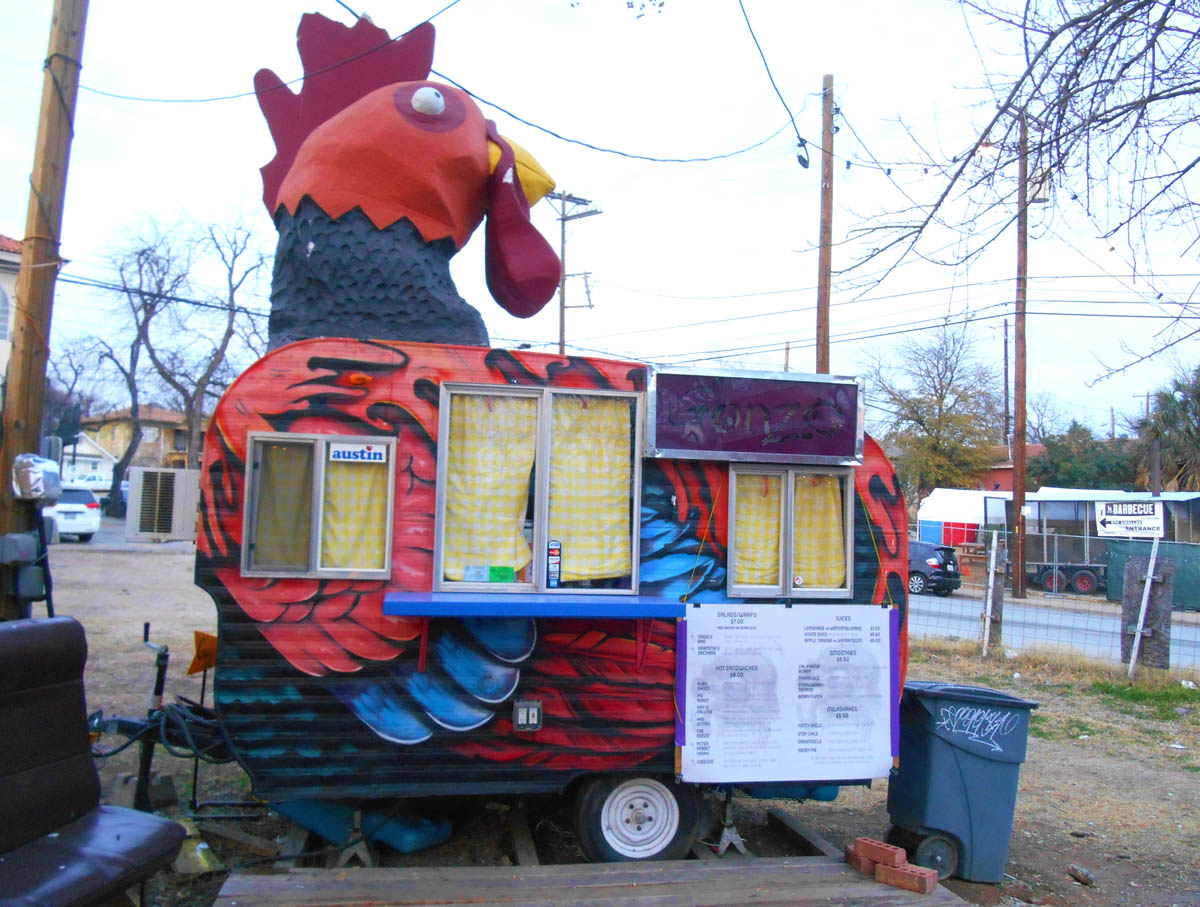 But equally notable is “What’s NOT new?”

Thankfully, Uncle Billy’s is still brewing — “Brew and Que” –over the fence behind me with all the old favorites,   I can’t stay away from their German-style pilsner, “Rock of Ages.” 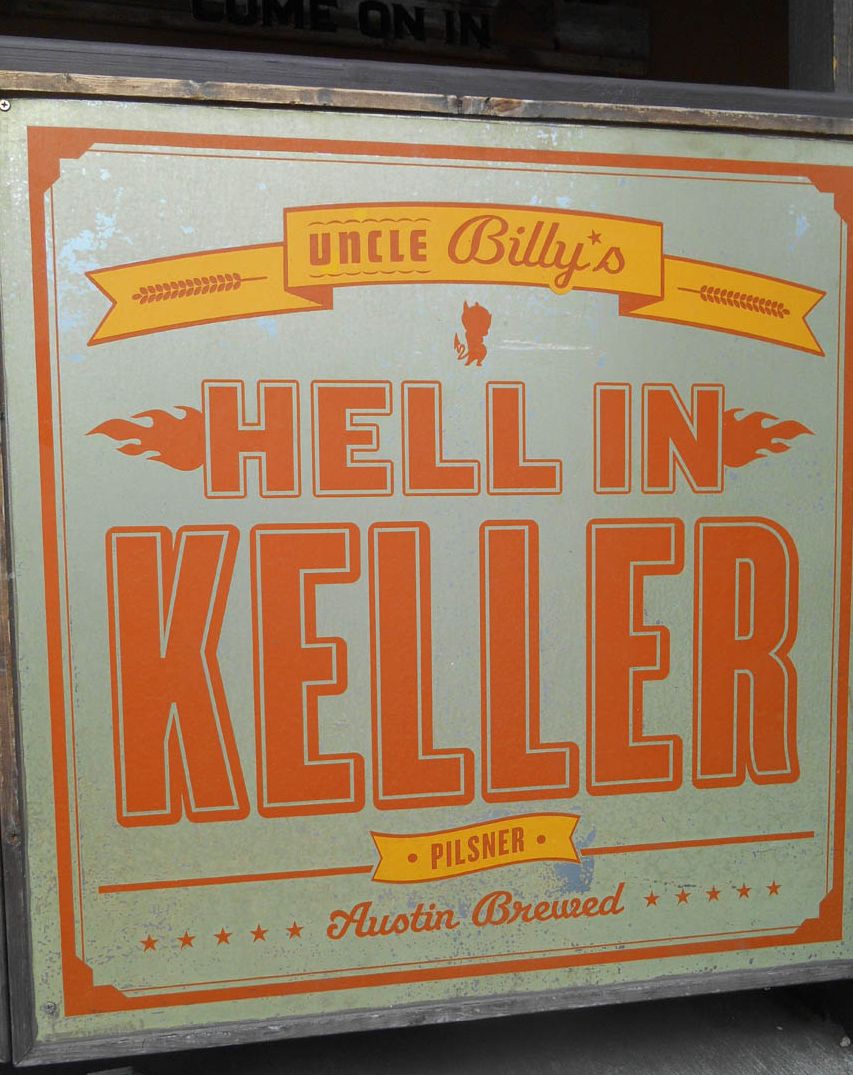 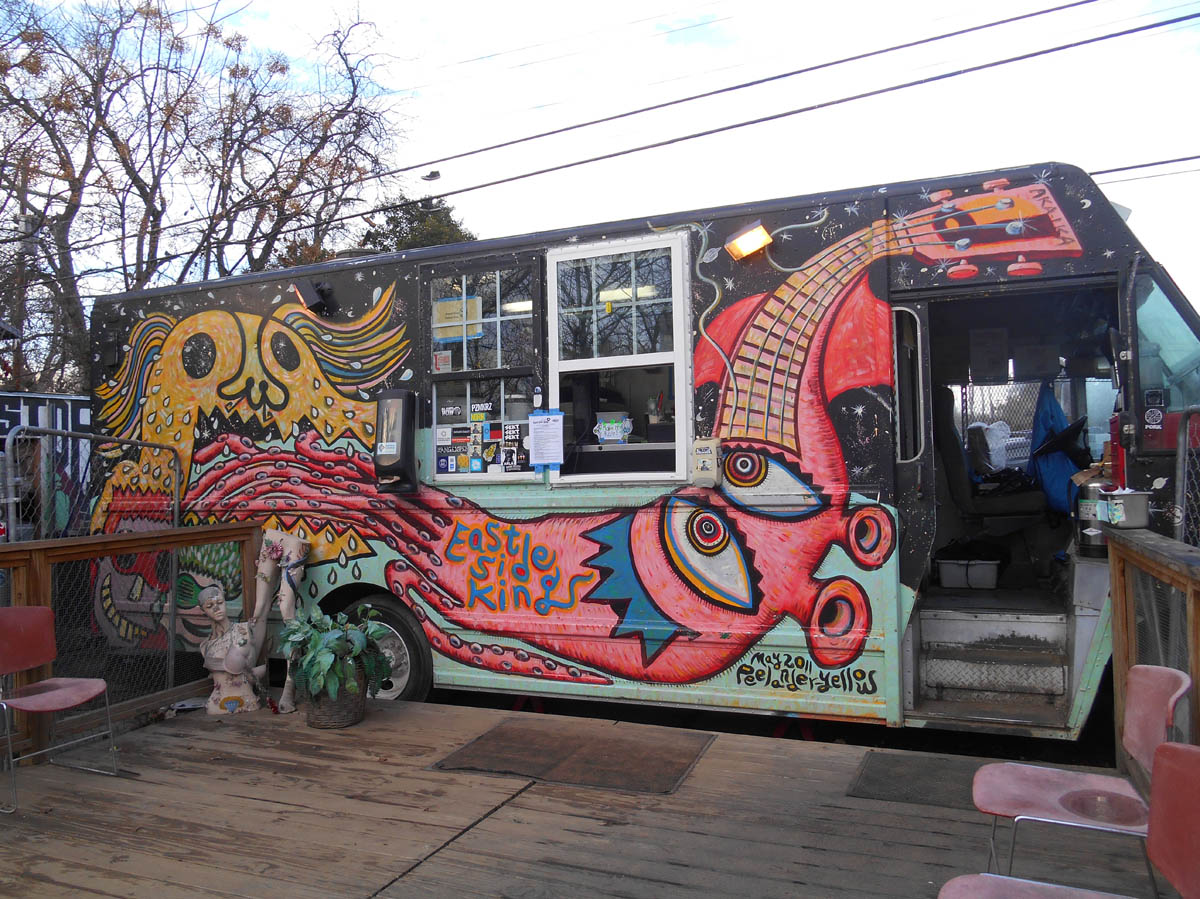 A food truck in a beer garden — SO sensible! 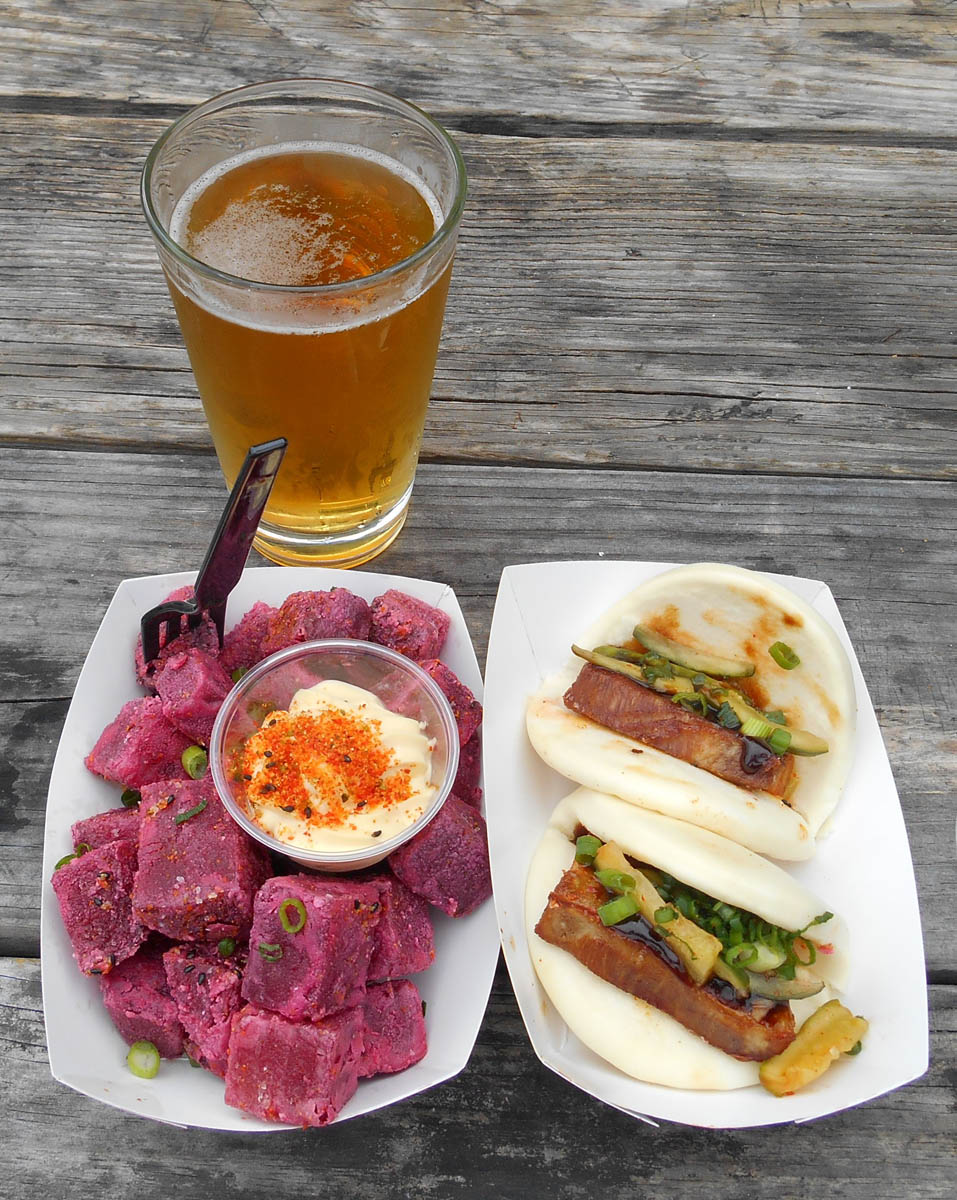 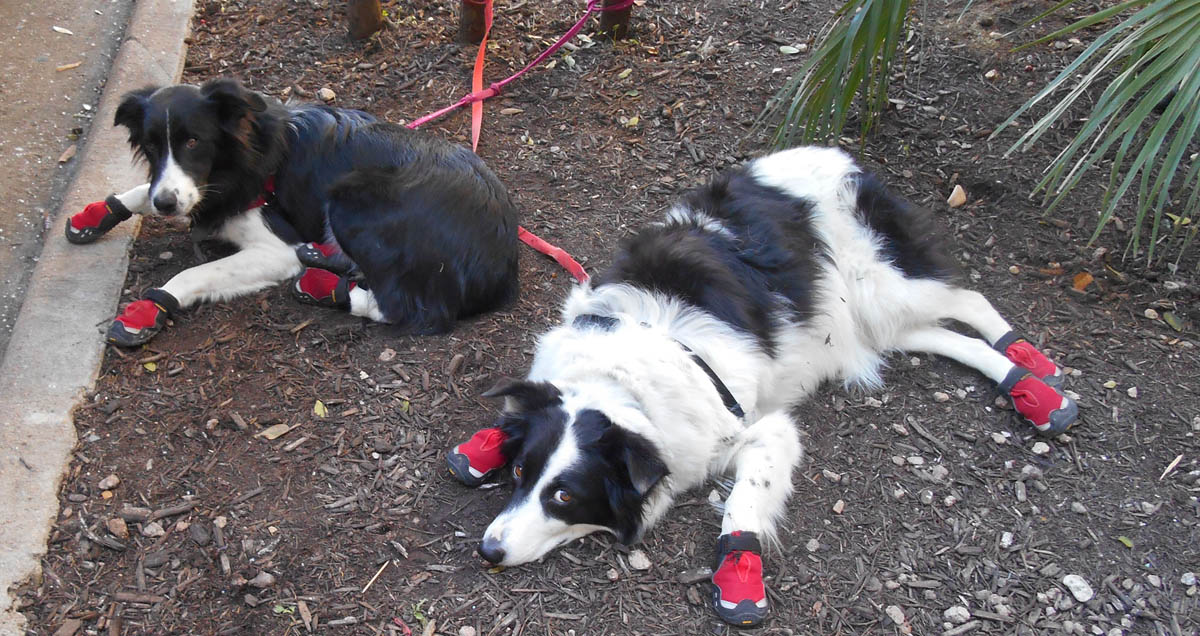 It feels great to come full circle to the only part of Texas that ever made sense to me.   And the experience is sweetened all the more by the added 6,000 miles on the odometer of my rolling home… 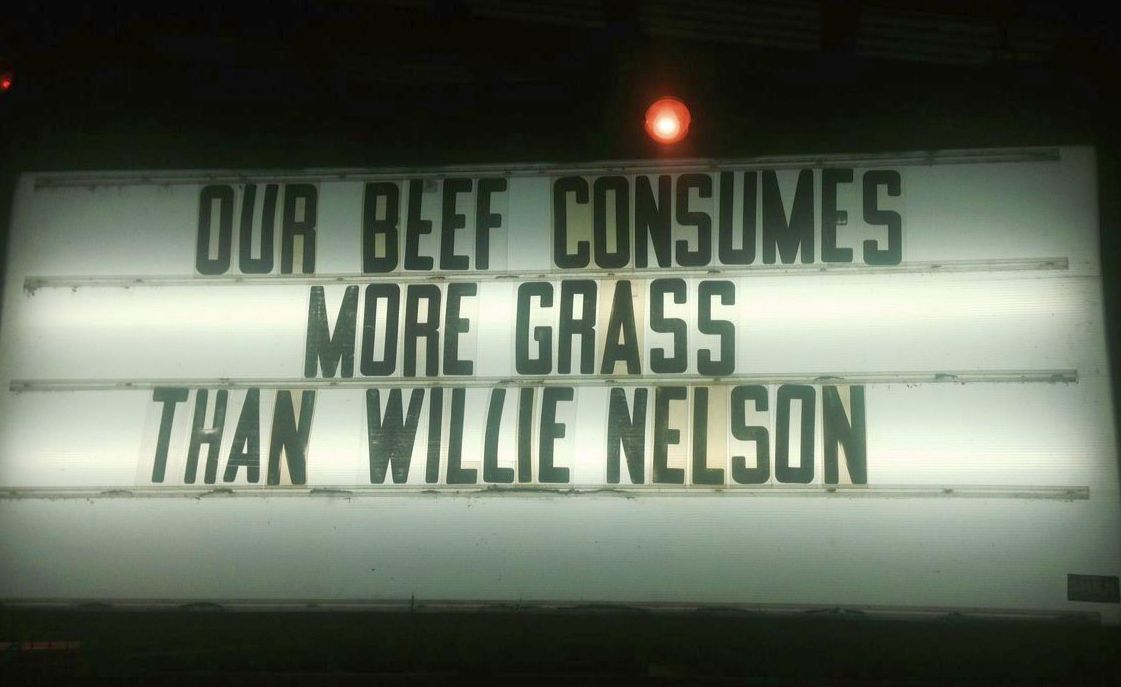 12 thoughts on “Full Circle Back to Weird”