With my good friend and blogger buddy Lynne now retired and me pretending to be, we needed something a little more fitting with the “Austerity Plan” than the absurd going rate of $40 per night in downtown San Antonio.  As the first major city along the I-35 corridor from South Texas, clearly, San Antonio has the “snowbird set” over a barrel, even appearing to resort to a bit of snowbird gouging, price fixing and discount manipulating during the winter months. 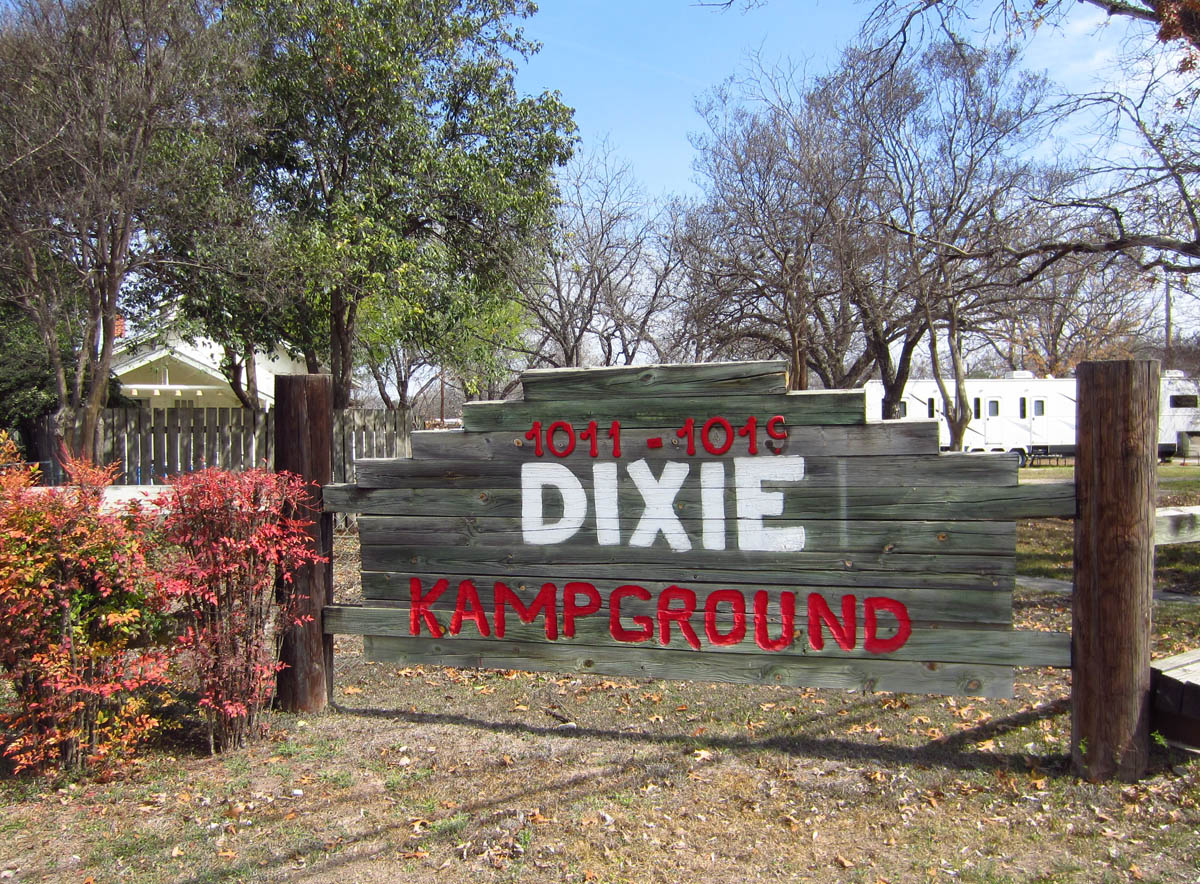 Oh sure, there are plenty of campgrounds within the perimeter, as long as you have a fat pocketbook. But our budget was $25 per night. And with only a few short days to explore the sights, we wanted to be close to downtown.  So I went to the Allstays App to see if there were any qualifying campgrounds, then began the process of elimination.  After crossing off all those with the $40 non-discounted price tag, all that was left was Dixie… 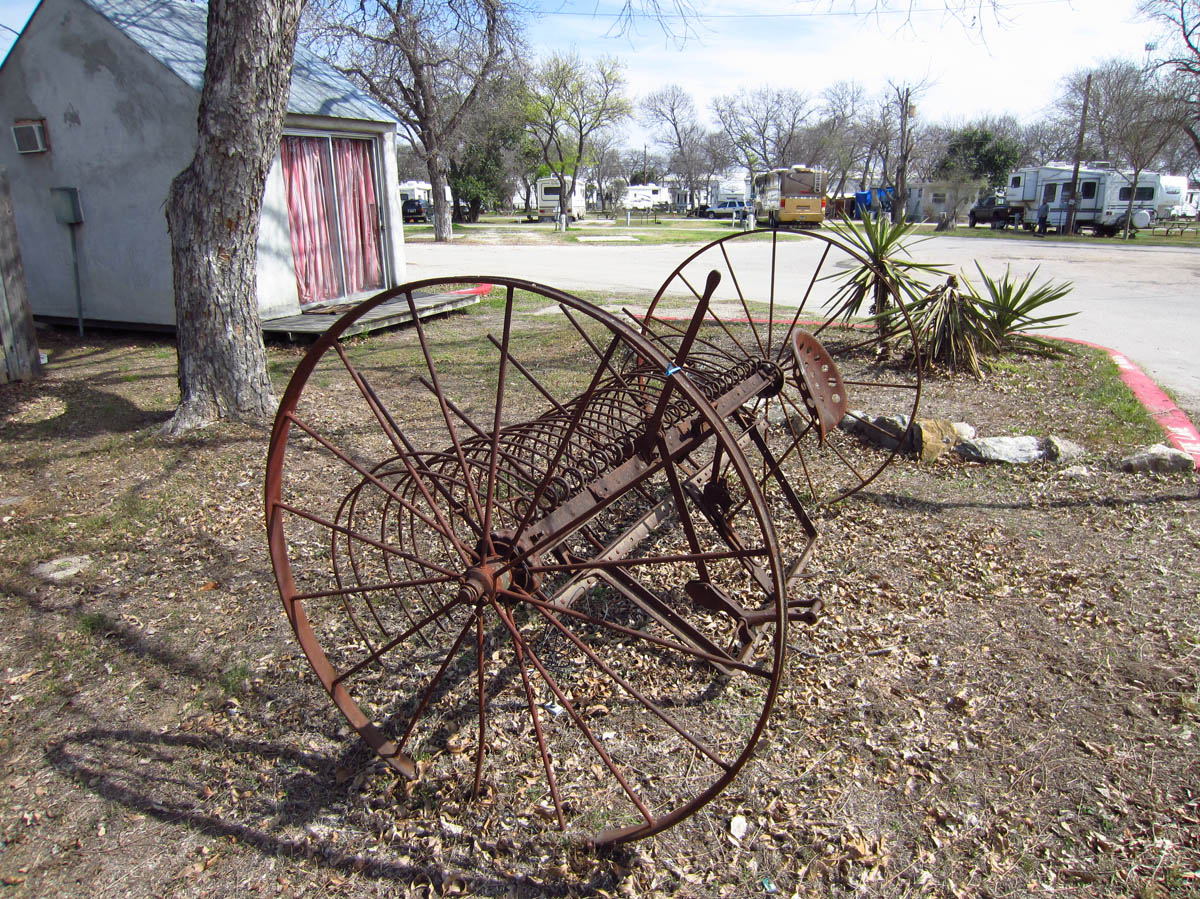 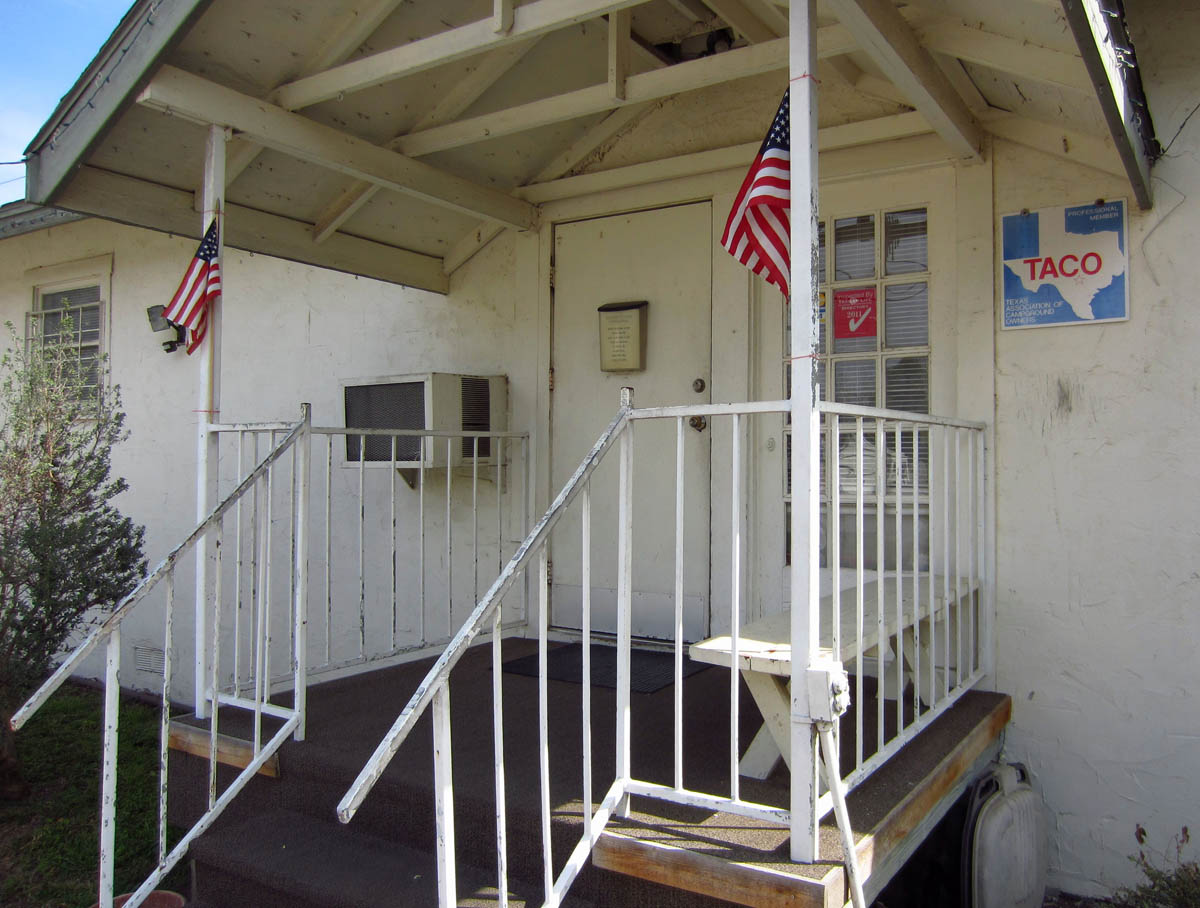 Being near the San Antonio Stock Show and Rodeo, Dixie seems to be a place for broken down cowboys in broken down rigs, waiting out broken dreams.   And apparently some have been waiting longer than others, as the smell of mothballs wafts from a nearby rig.  I wondered why the office was so non-committal when I called for reservations.   They stated that the campground was “full,” and and I would need to call back after the Stock Show.  They couldn’t tell me whether there was a vacancy or not, because some people check in, but they can never leave.  Now, I see why.  Their rigs are all broken down! 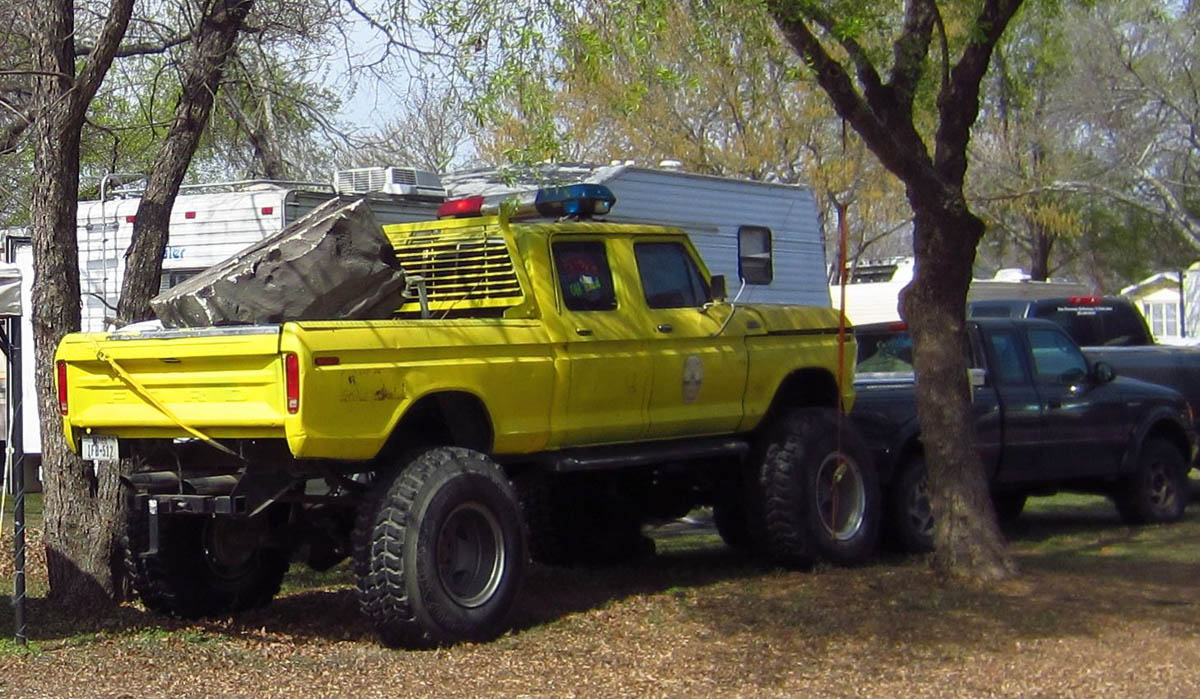 “Randy’s Offroad,” complete with fake boulder in the truck bed. 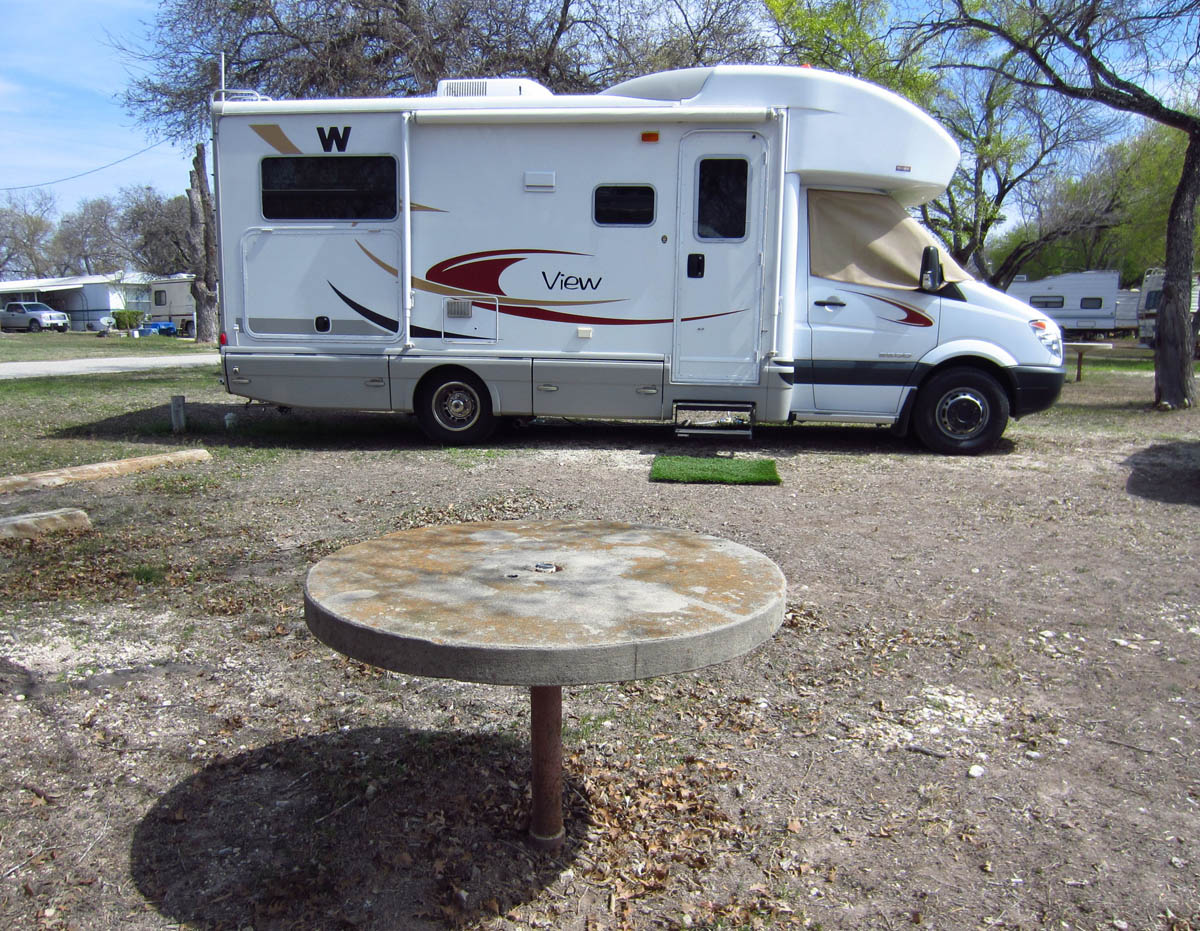 First rate picnic tables at every site — what’s not to love??

Personally, it suits me.  There are no bingo games, no pot lucks, no line dancing, and most importantly, no one on all four sides of me, except for Lynne and Millie.   It’s quiet.  It’s convenient.  And it’s quirky.  Just my style.   I am not so sure about Lynne, though. She seems to be taking it all in stride, though I suspect Dixie Kampground may be a few of steps down from the Pemex in Mexico.  😉 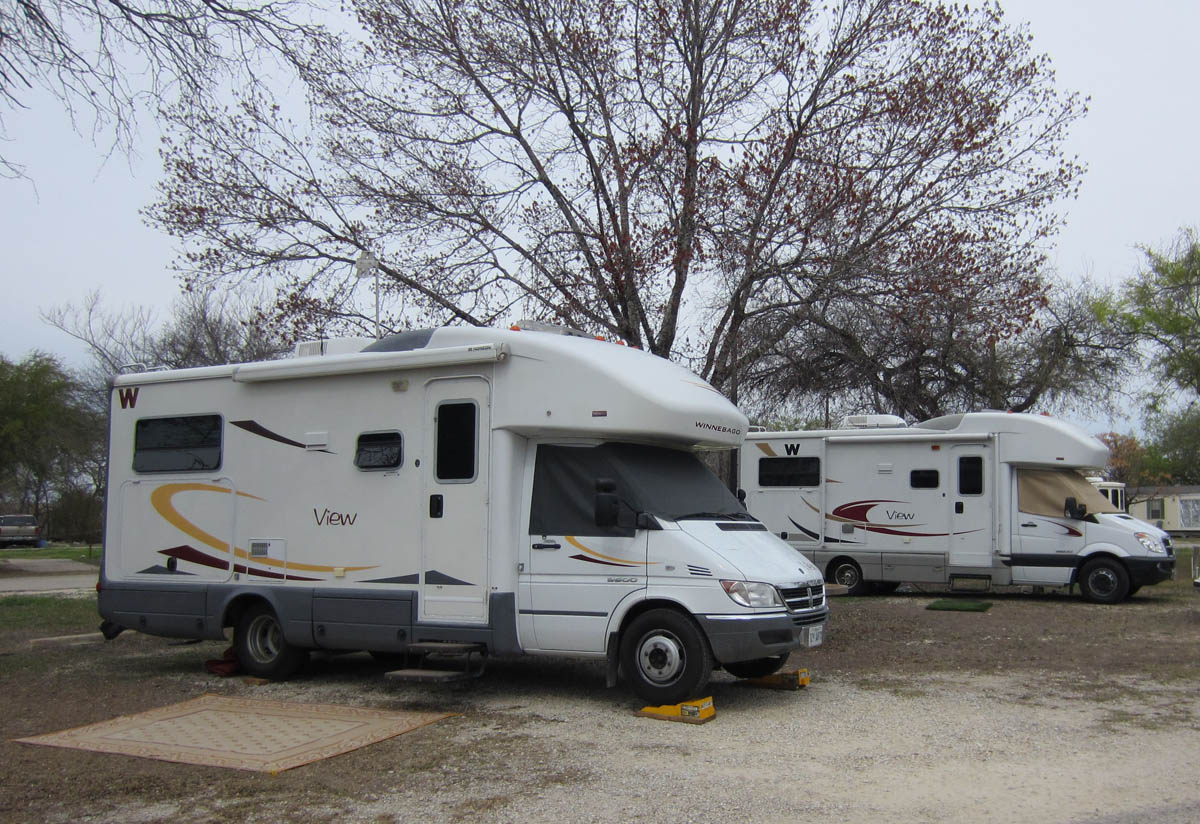 The only “views” in the campground. 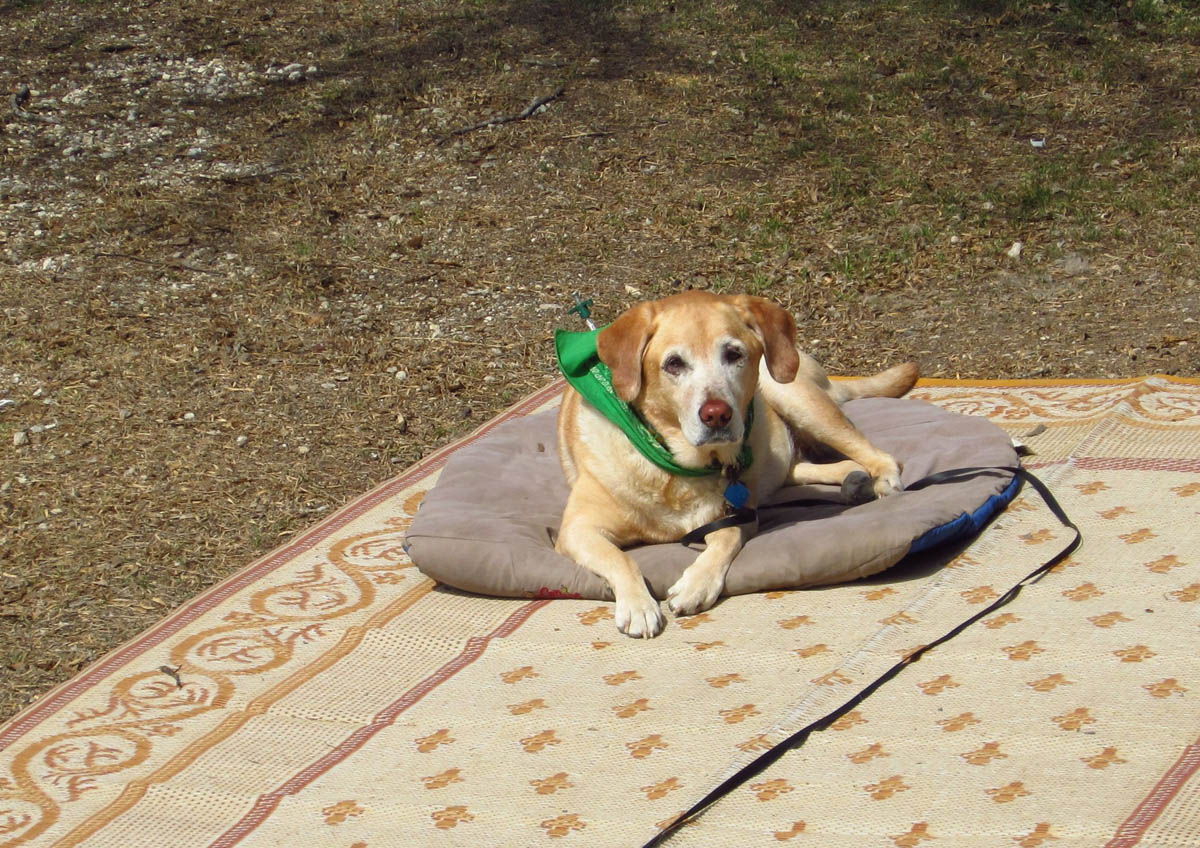 Even Millie is asking, “Who’s idea was this anyway??”

The Dixie Kampground does have two redeeming qualities, though.   The first being Allen, the very friendly, helpful roving RV Repairman.   He set my mind at ease on a recently discovered leak in my hot water heater, when during what I vow to be my LAST Texas ice storm,  I developed an icicle stalactite all the way to the ground coming from my hot water heater.   And since he just happened to be in the neighborhood, I asked him to check it out.  Allen says “It’s just a tiny leak in the escape valve.”  He banged on it with a wrench and said “That should do it!”  So far, so good! 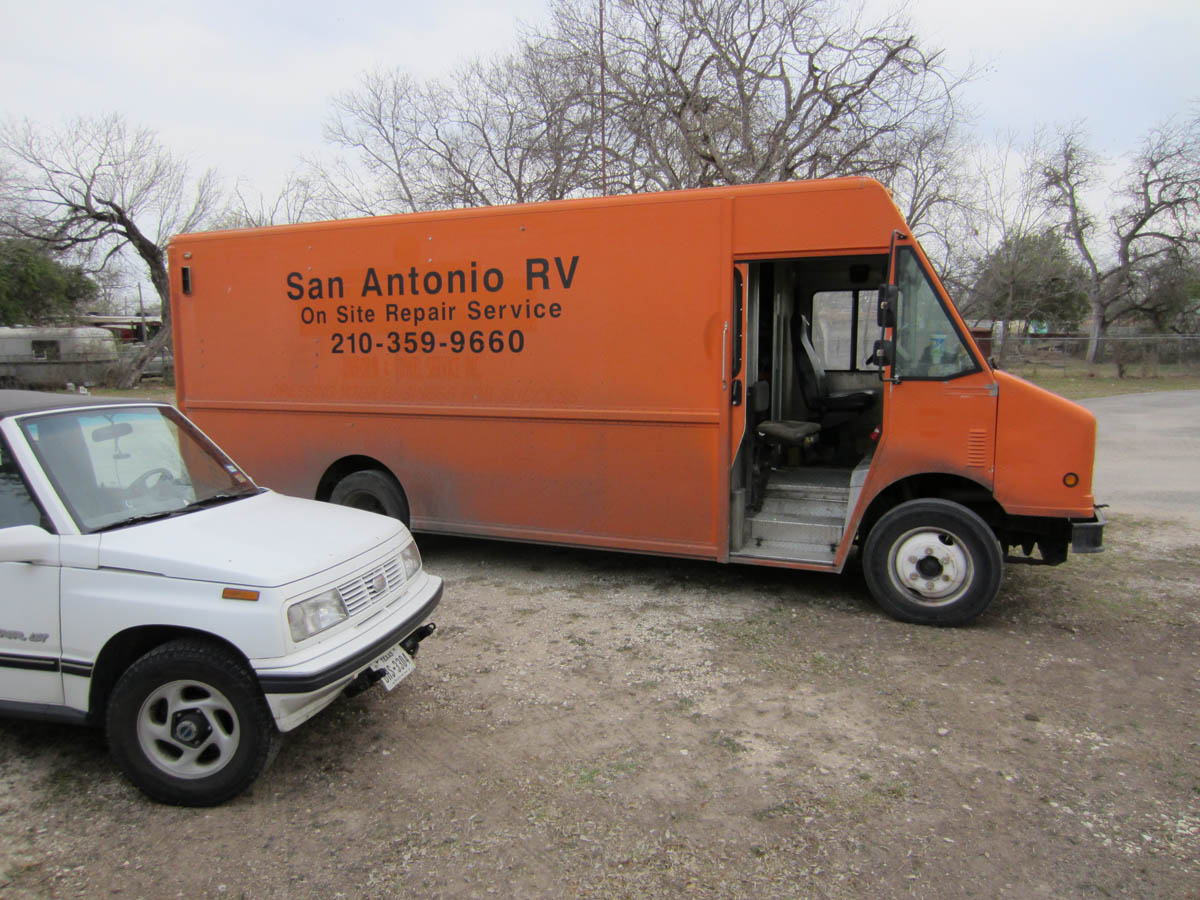 But the best part of being in Dixie?   Look what is only a block away!  CURVES! 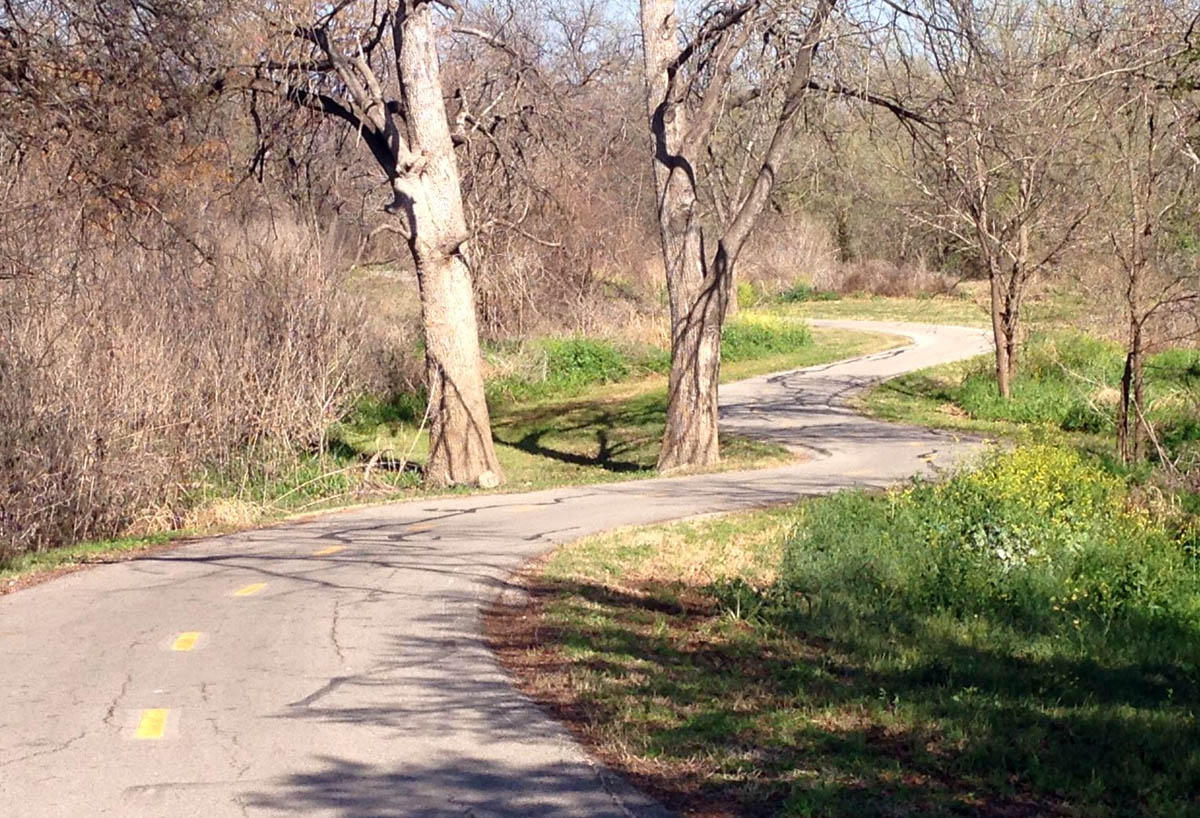 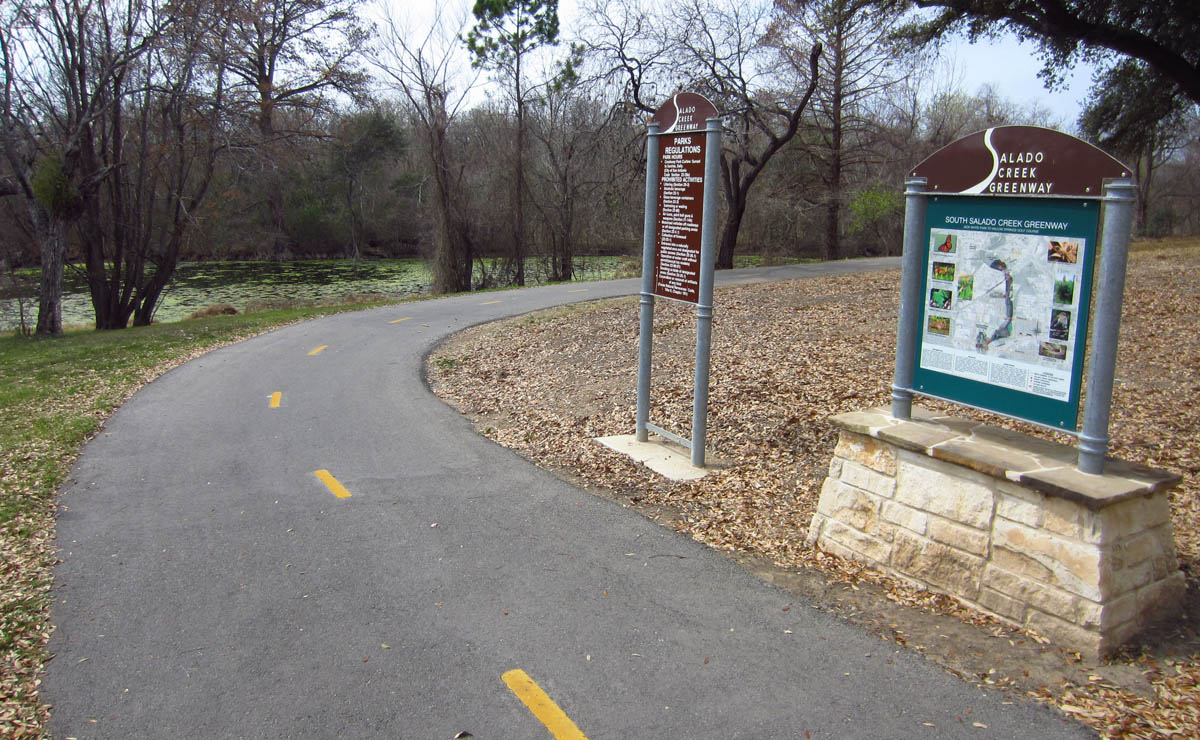 This particular section of the Salado Creek Greenway trail goes for approx 8 miles.

This is a GREAT paved eight mile bike path that is part of the SARIP (San Antonio River Improvements Project,) or greenway expansion project in San Antonio.   Although the city does not appear all that “bike friendly” on the main streets, they are making great strides at paving these greenways along the creeks and the famous San Antonio River. 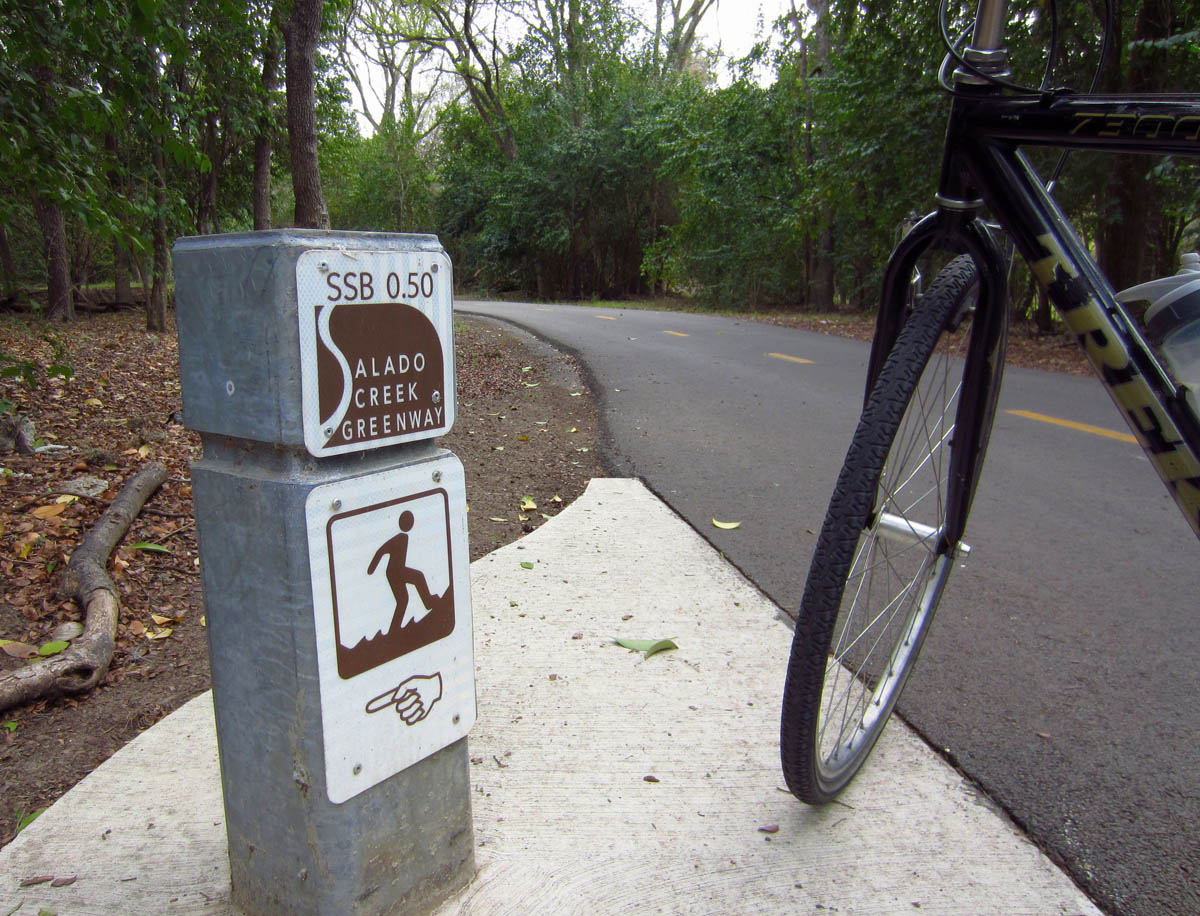 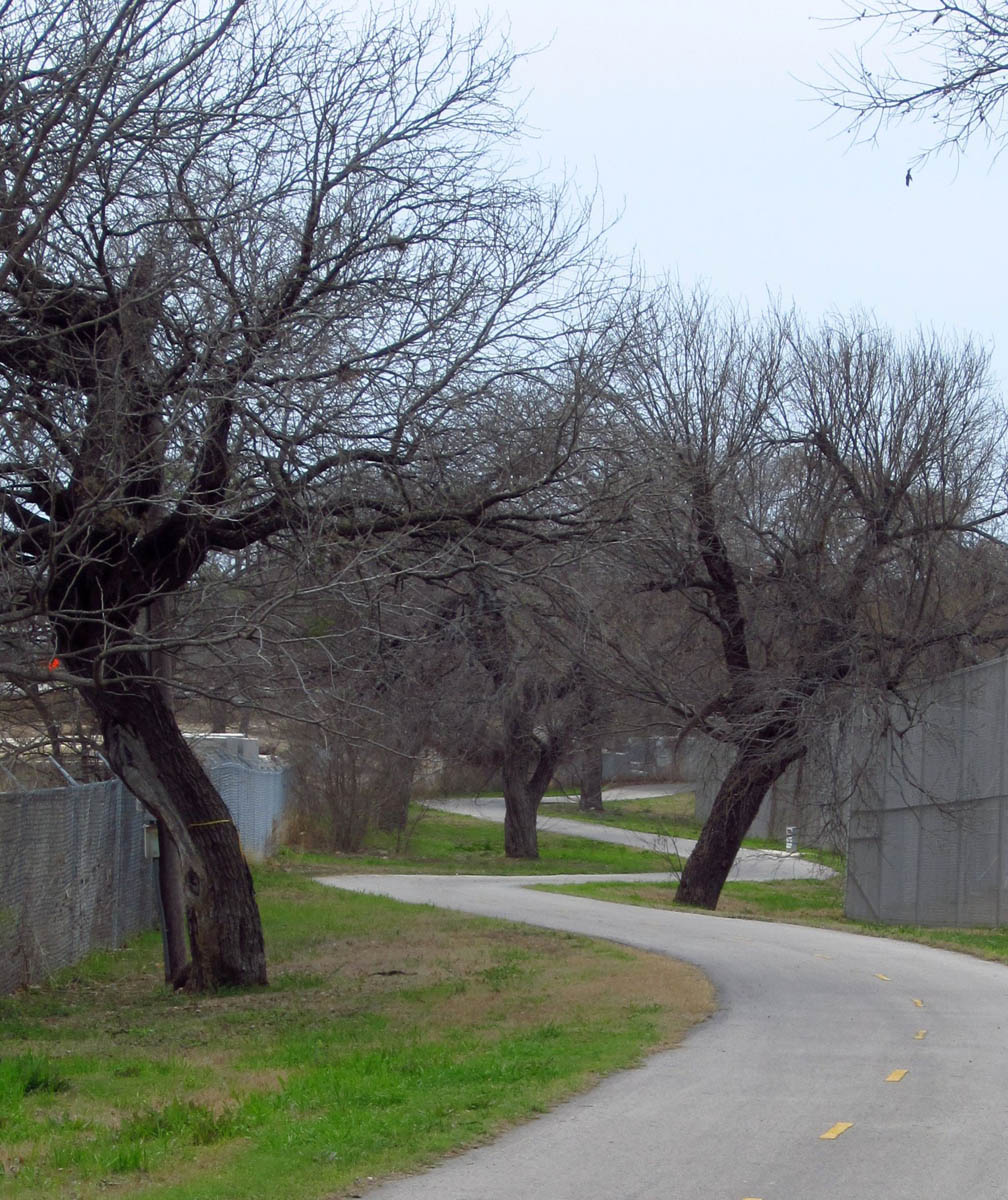 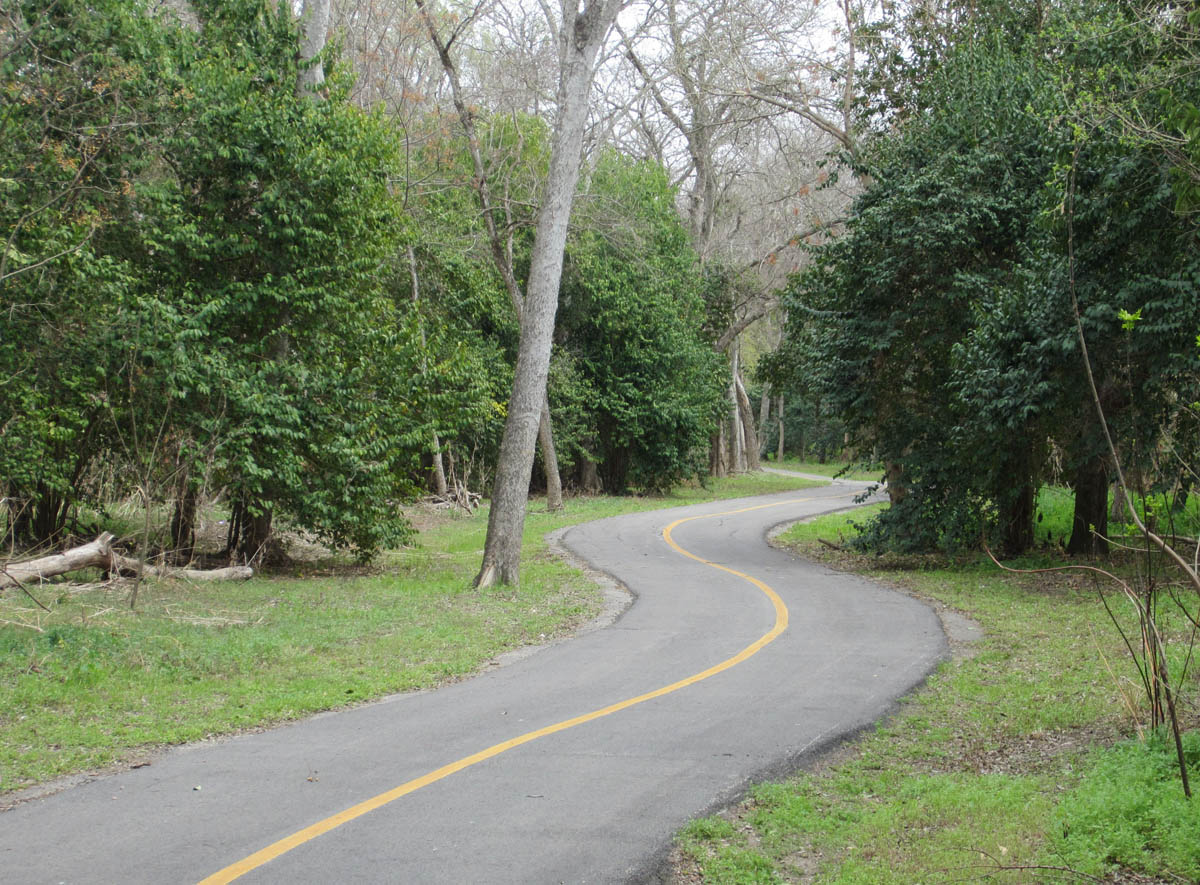 Oh, Green, how thou hath forsaken me…

Any place that will afford me my own “escape valve” to get out of the rig and enjoy some sunshine during the 8 hour work day is deserving of at least a one star rating in my book. And I ain’t just whistlin’ Dixie! 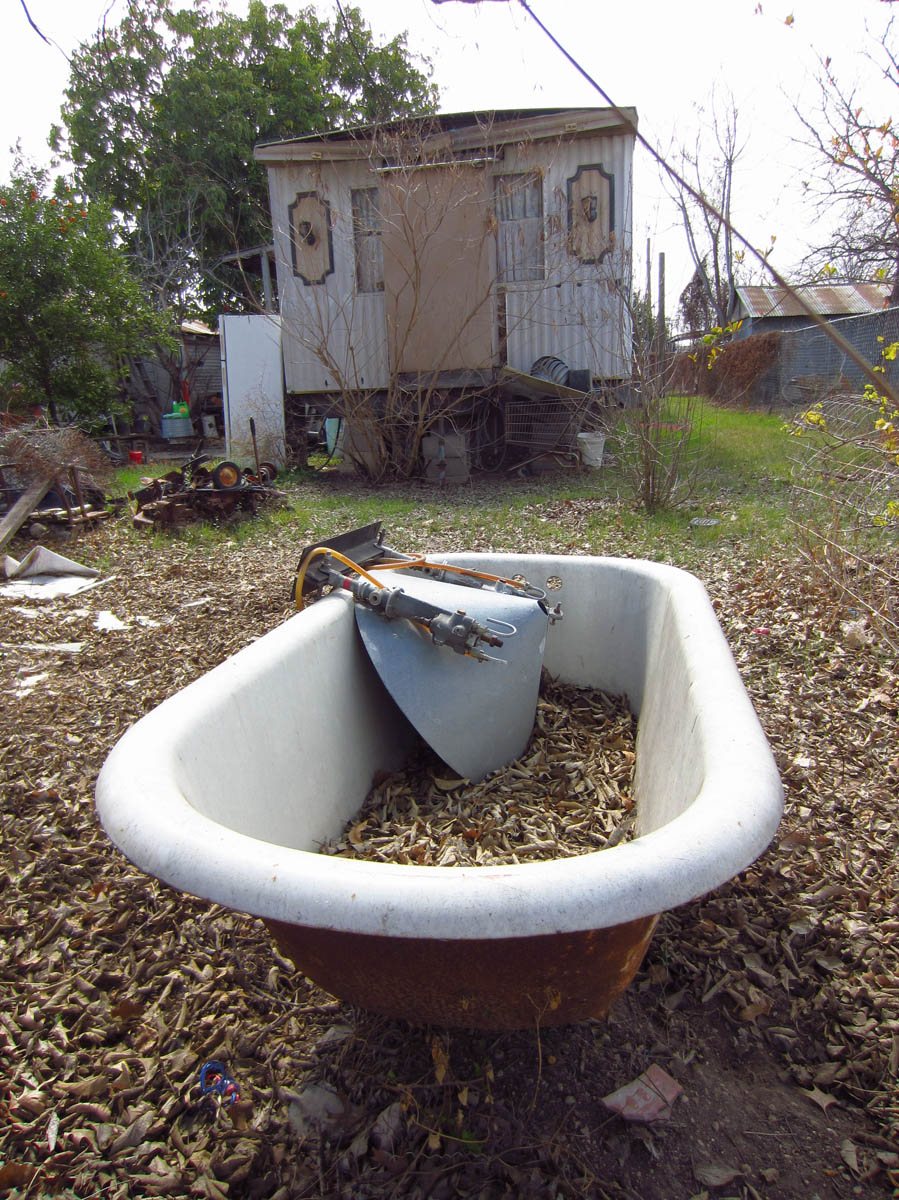 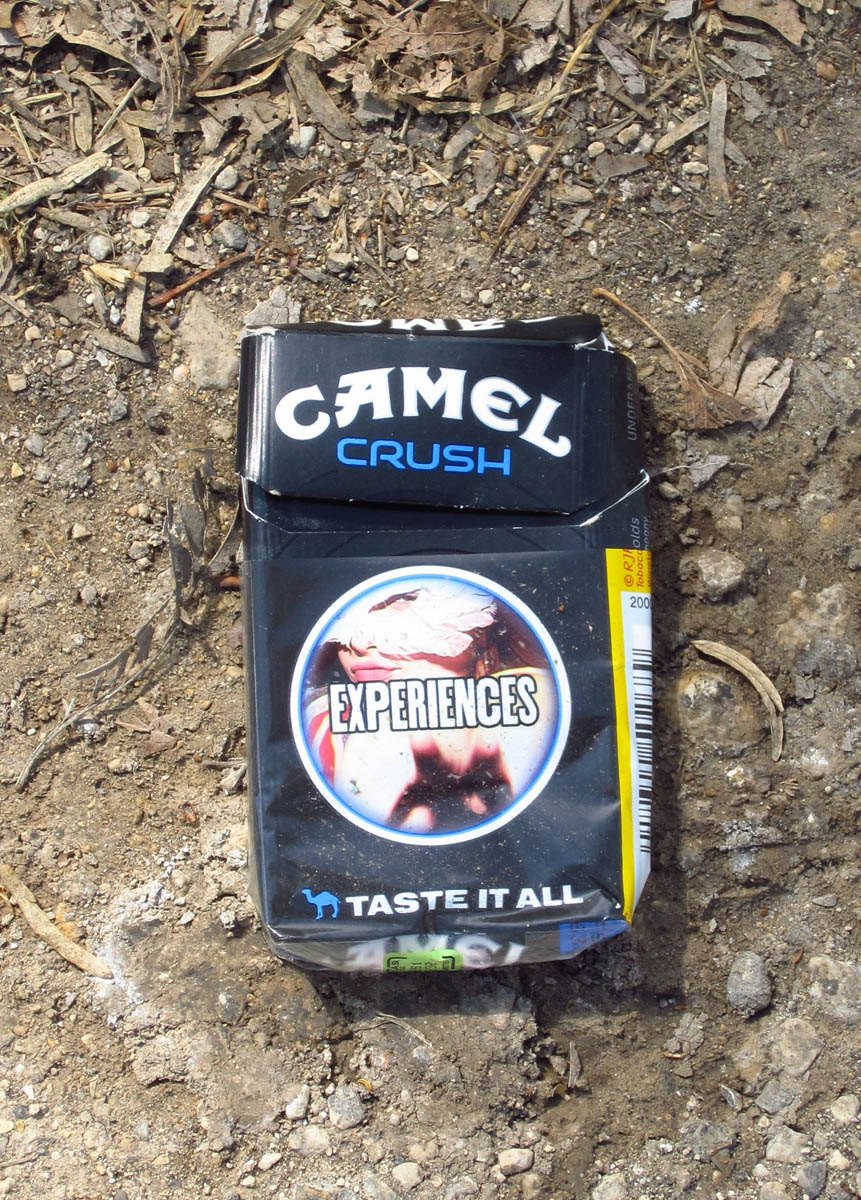 2 thoughts on “Don’t You Wish You Were in Dixie?”