It’s perfect spring weather on our first full day in San Antonio.   It is finally warm enough to open up the skylight, with nothing but a screen door between my virtual office and the cacophony of birds in the old pecan trees outside.   It is 4:00pm, and I sitting at my desk, sleepily downloading excel reports to the chirping of the birdsong outside, when the “ding” of my iphone signals an incoming email.   It’s Lynne.  “I was thinking about going to the Missions National Historic Park to take some pics since it’s supposed to be cloudy the next 2 days. Want to come if I wait until five?”   This is all the impetus I need to speed up the downloading and get the reports zipped up and emailed out asap.

Still on Central Time, the sun is due to set in less than an hour, so we jump into Lynne’s Tracker and speed across downtown toward the Missions National Historic Park along the San Antonio River.   These missions within the park form the largest concentration of Catholic missions in North America.  They were not just churches, but also self sufficient communities, working farms, blacksmiths — as well as fortification from enemies. 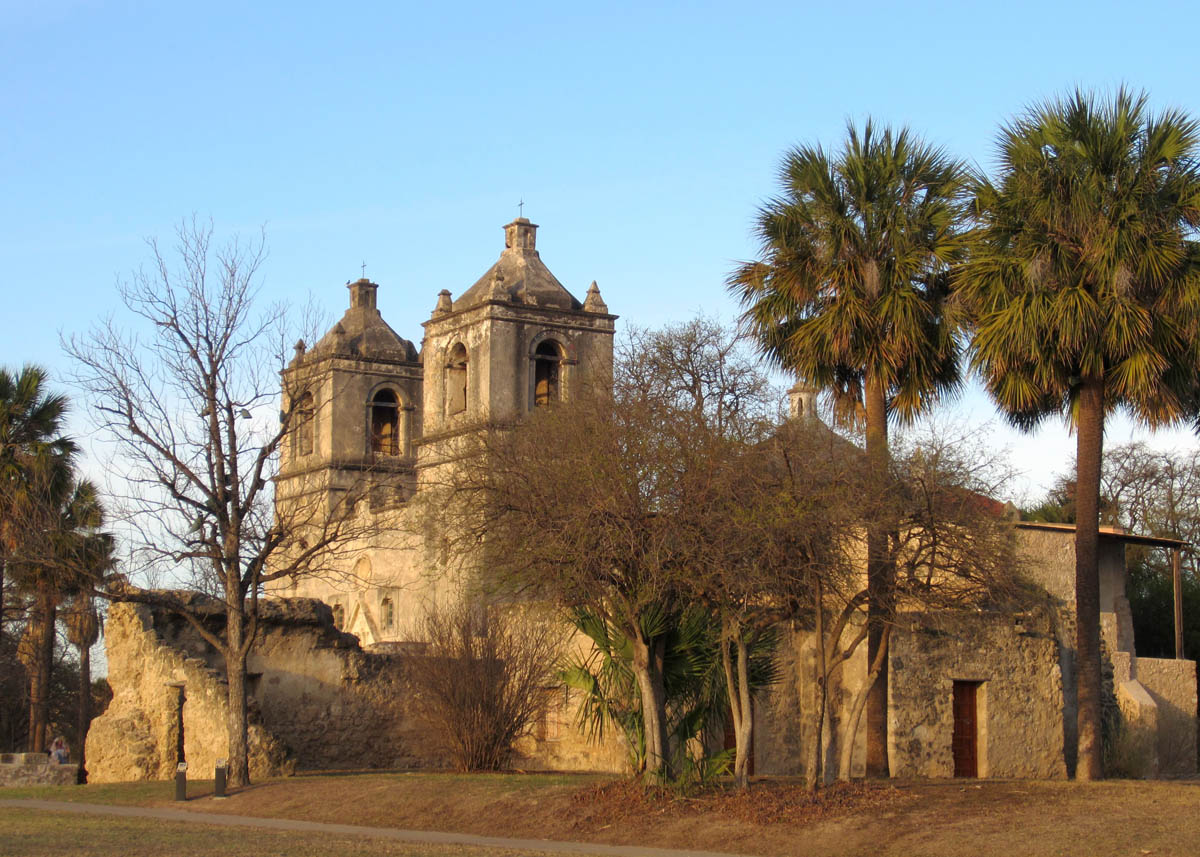 Having just had my second Nikon Coolpics 3500 Point and Shoot camera fail in just less than 2 years, I jumped the Nikon ship and went with Canon this time.   I wanted another one of the “ultra thin” styles, because I like to keep the camera in my pocket, without having it pull my pants down!    And I tend to be a bit hard on cameras for the same reason…losing them out of my pocket on all those bike path curves.   So I bought a replacement, a Canon ELFP this time around.    This would be “Mr ELFPhie’s” first photo shoot.   Since I had not even had time to read the manual, I grabbed my Nikon 3100 SLR as a backup as I was bounding out the door to meet Lynne.

We arrive at the first stop, Mission Concepcion, 1755, just as the sun is starting to sink low in the sky.   It is the oldest unrestored stone church in America, and I am immediately struck by the wonder of finding such a beautiful, stately old structure here in the middle of what looks like “the hood.” 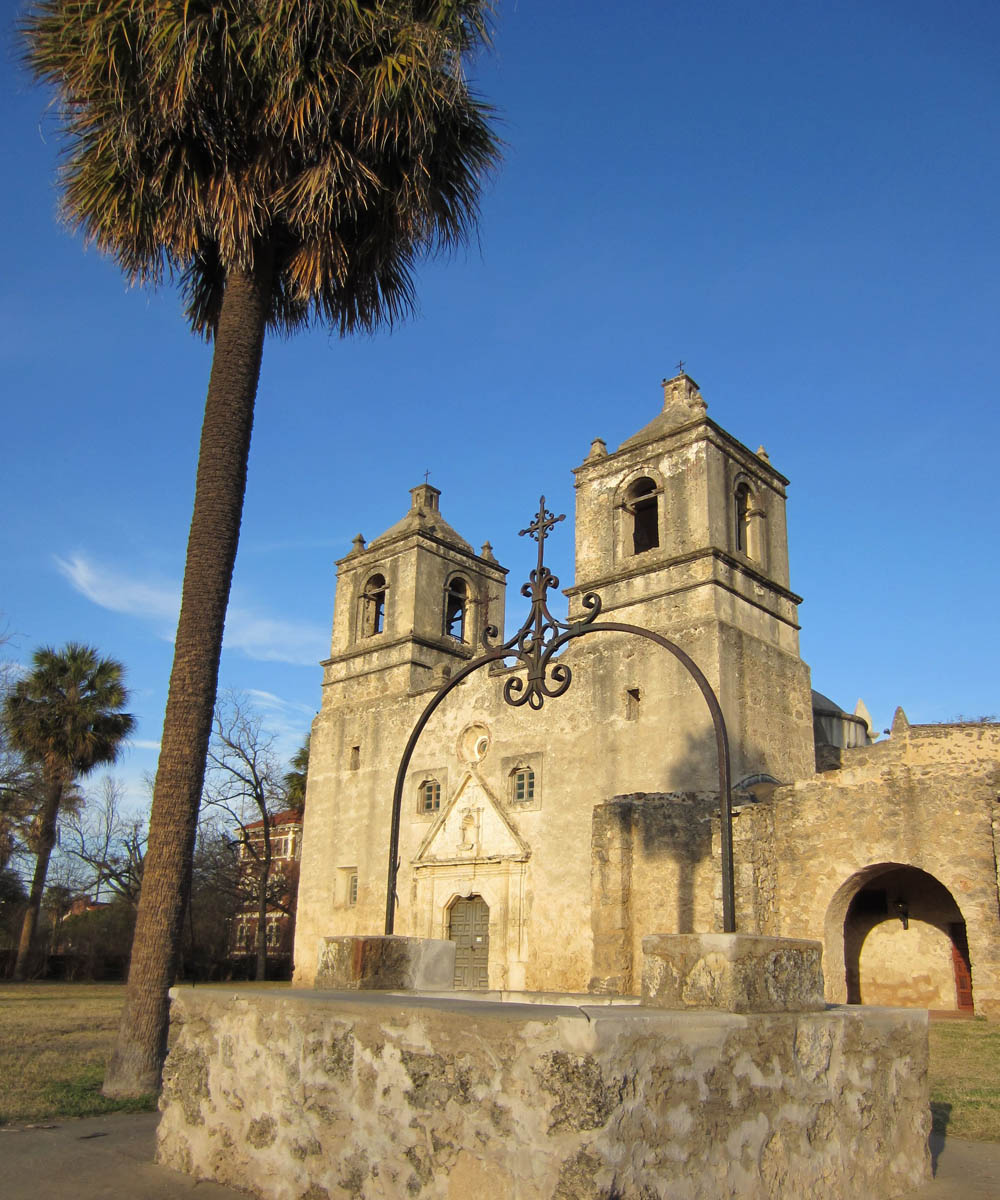 Lynne, one of the best photographers I know, steps from the Tracker in one swift move, and is already starting to shoot as she walks toward the Mission.   I am running along behind her in true “Lucy Fashion,” camera bags flapping, contents spilling out of my backpack, jacket sleeve on one arm only, trying to stuff my Point and Shoot camera case into my pocket while grabbing for the SLR.   Lynne adds to the pressure, “We’re losing light fast!”    Having never used the Canon P&S before, I decide to stuff it in the opposite pocket, and stick with the camera I know.  So I power up the Nikon SLR.  “No Memory Card.”   How many times has this happened to me?  Honestly!! 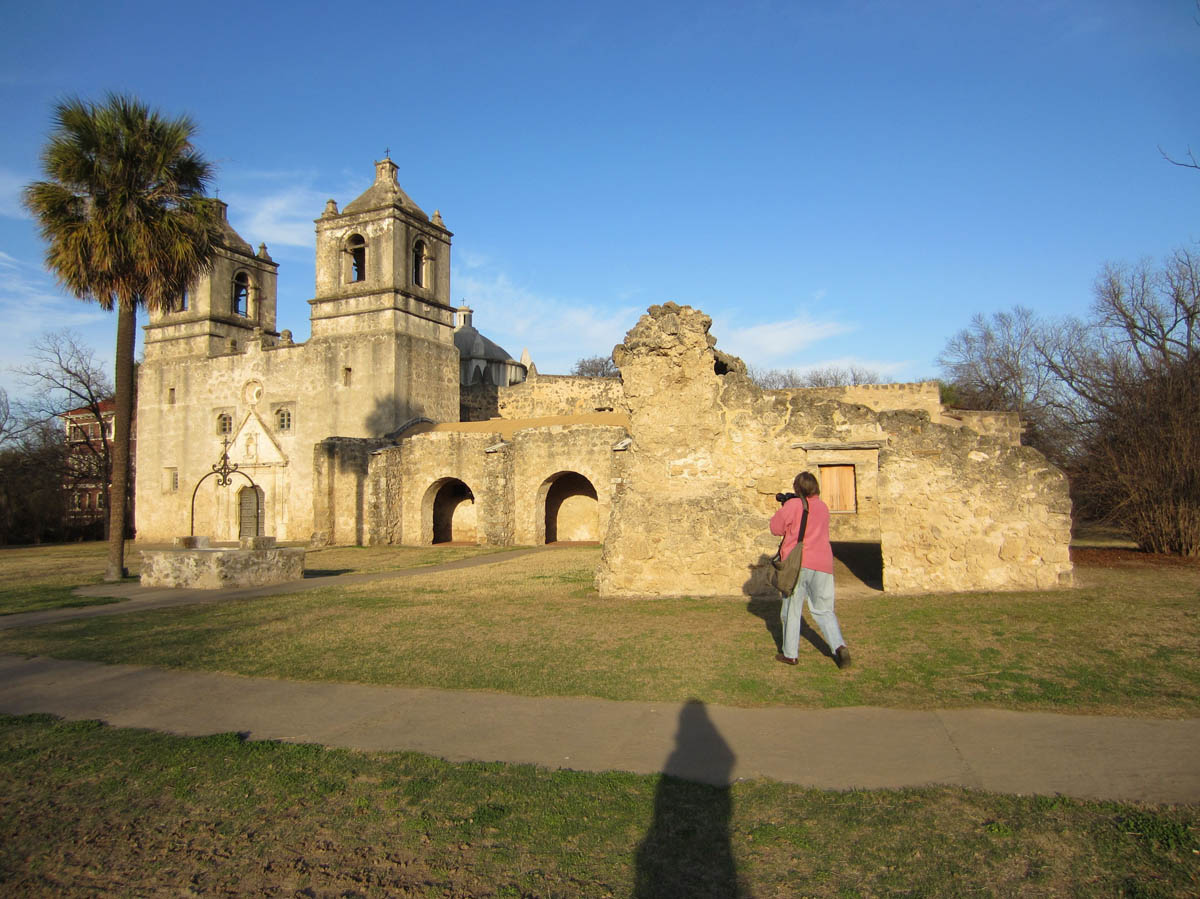 By this time, Lynne has already made the rounds of the building, snapped a few dozen photos, and is ready to head to the next Mission, while I am stalking behind her, trying to “cheat” off of her for some good sunlight angles.

We race off to the next Mission, San Jose, 1782, with Lynne’s iphone GPS on the dash, me holding her tablet for a closer view of the park roads, and I feel like I am in an episode of “The Amazing Race” as we spin through the parking lot, trying to figure out the closest access between the “Bus Drop-Off” and the general parking area.   It’s after 5pm now, and the gates to the compound are locked.    Lynne waits with the engine running, while I am also “running” around the locked gates, trying to see if there are any openings that will afford a decent shot.  Nope.   Back into the car as we make tracks to the next stop. 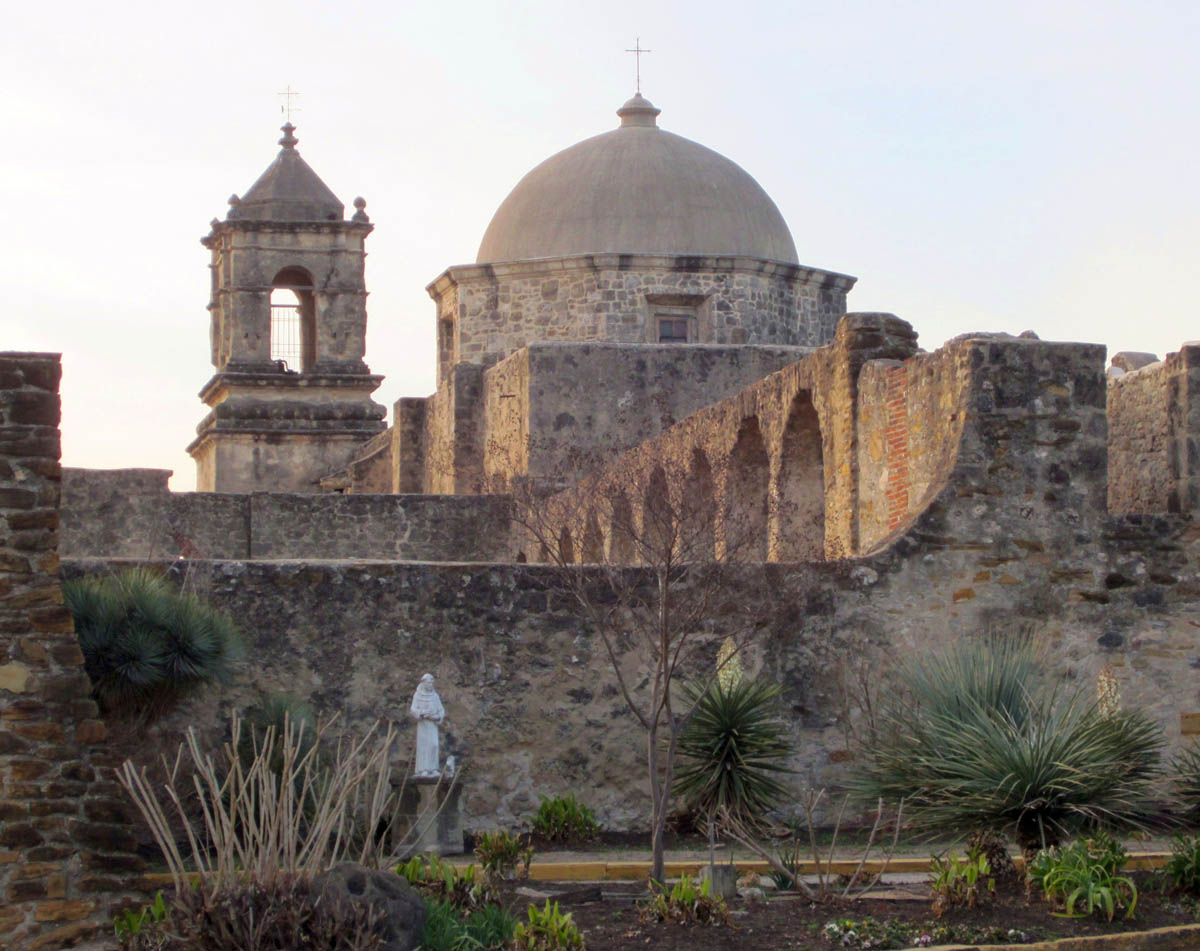 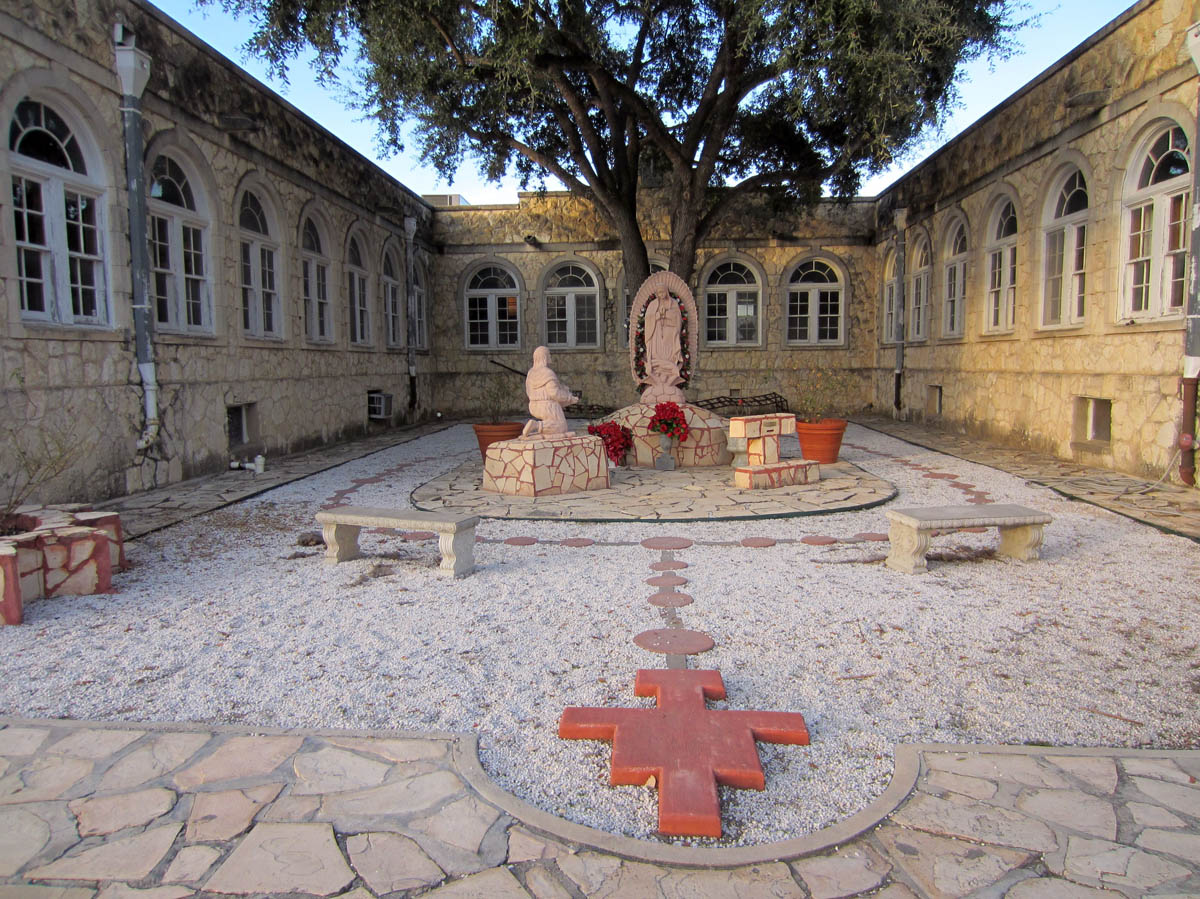 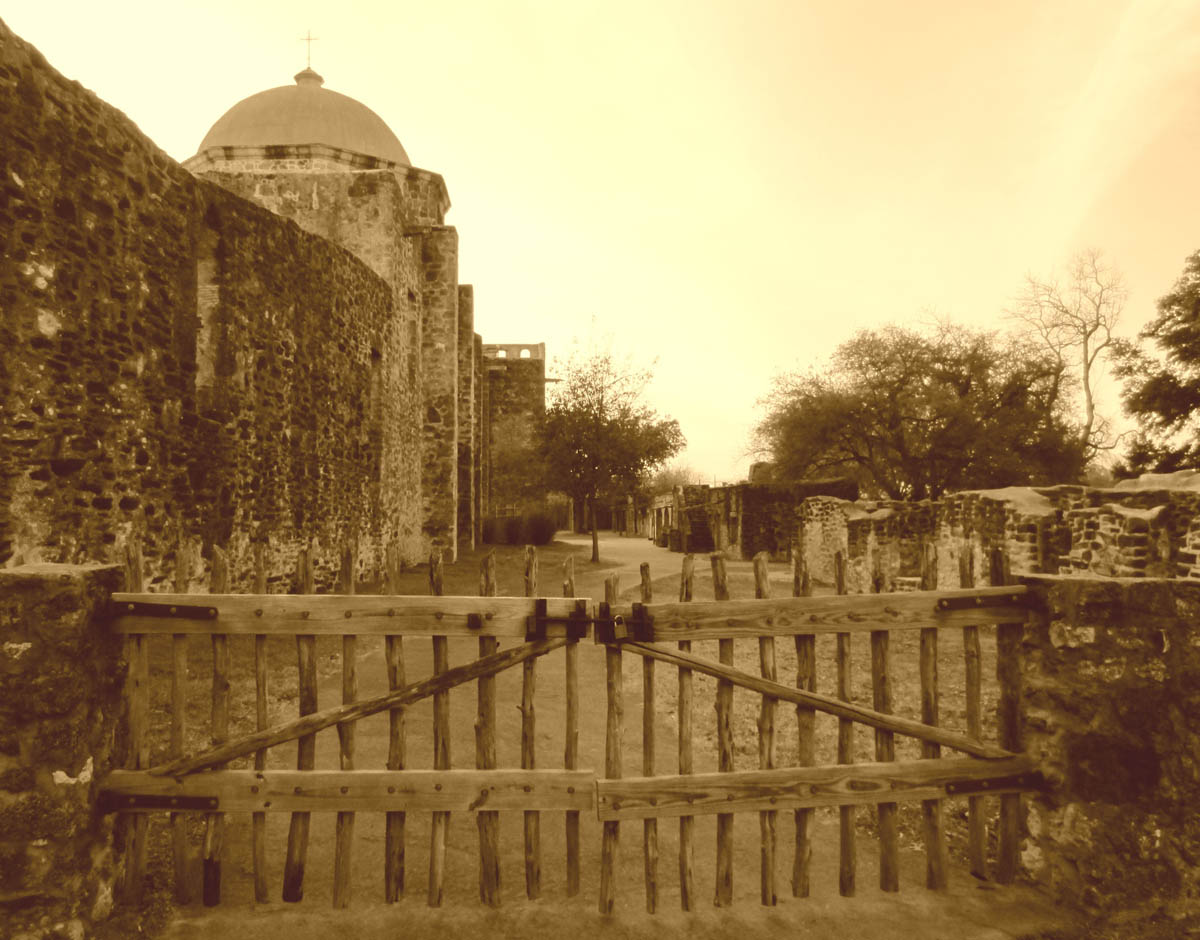 We drive up to the Mission San Francisco de la Espada just as the last few golden rays of sun are slipping away.   We have two choices, drive all the way around to the back official visitor’s lot, or drive through the open gate that says “Convent Entrance.  No Public Parking.”   We decide it is better to ask forgiveness and do three Hail Mary’s all for the sake of the photograph.

The little Espada, 1731, the oldest of the Missions and the first in Texas, is my favorite by far.  Small, intimate, with a rustic authenticity.   Now at the end of our “mission,” there is time to slow down and appreciate the details such as the exposed brick in the old stone walls (Espada was the only mission to make their own bricks, which you can see beneath the limestone surface,) and the “broken arch” over the doorway.   We stand and watch as the golden light turns to soft rose reflecting in the bell arches overhead. 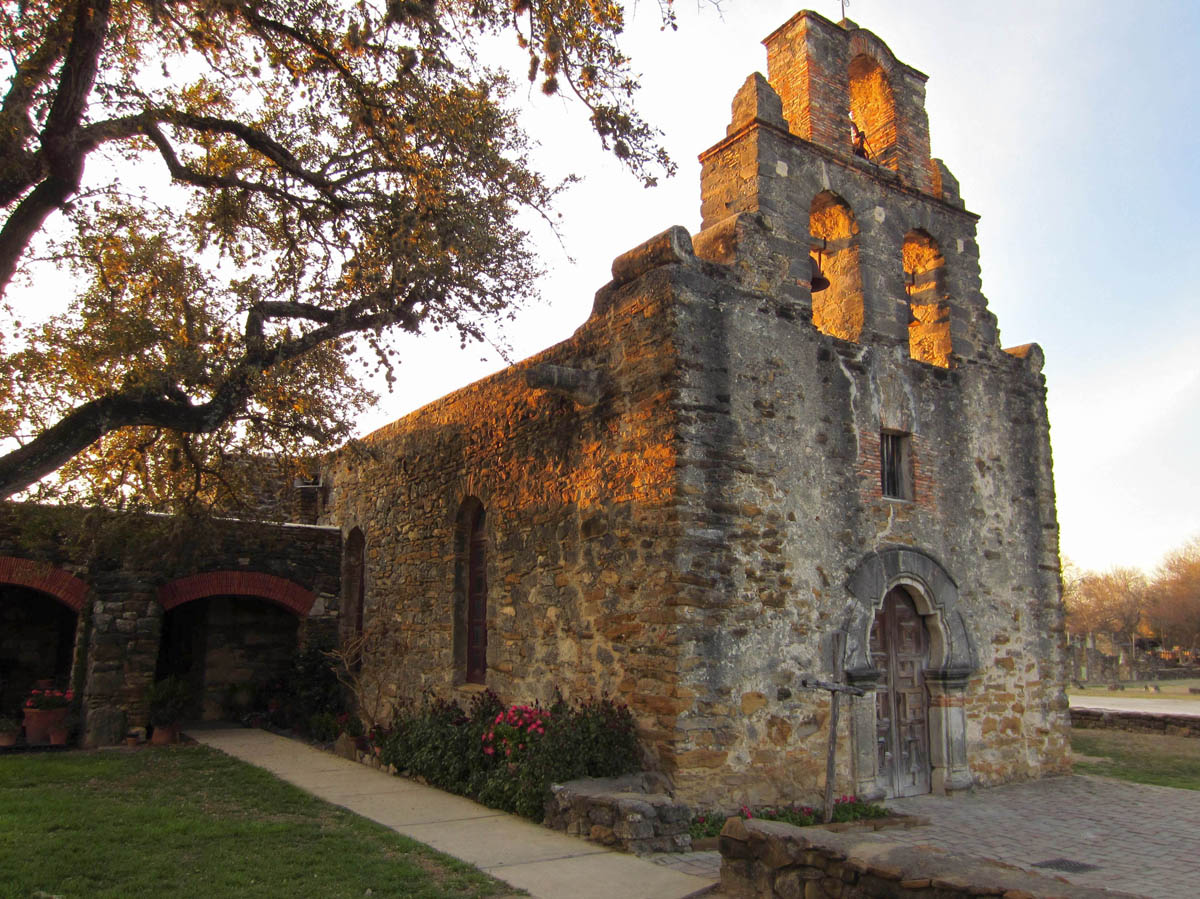 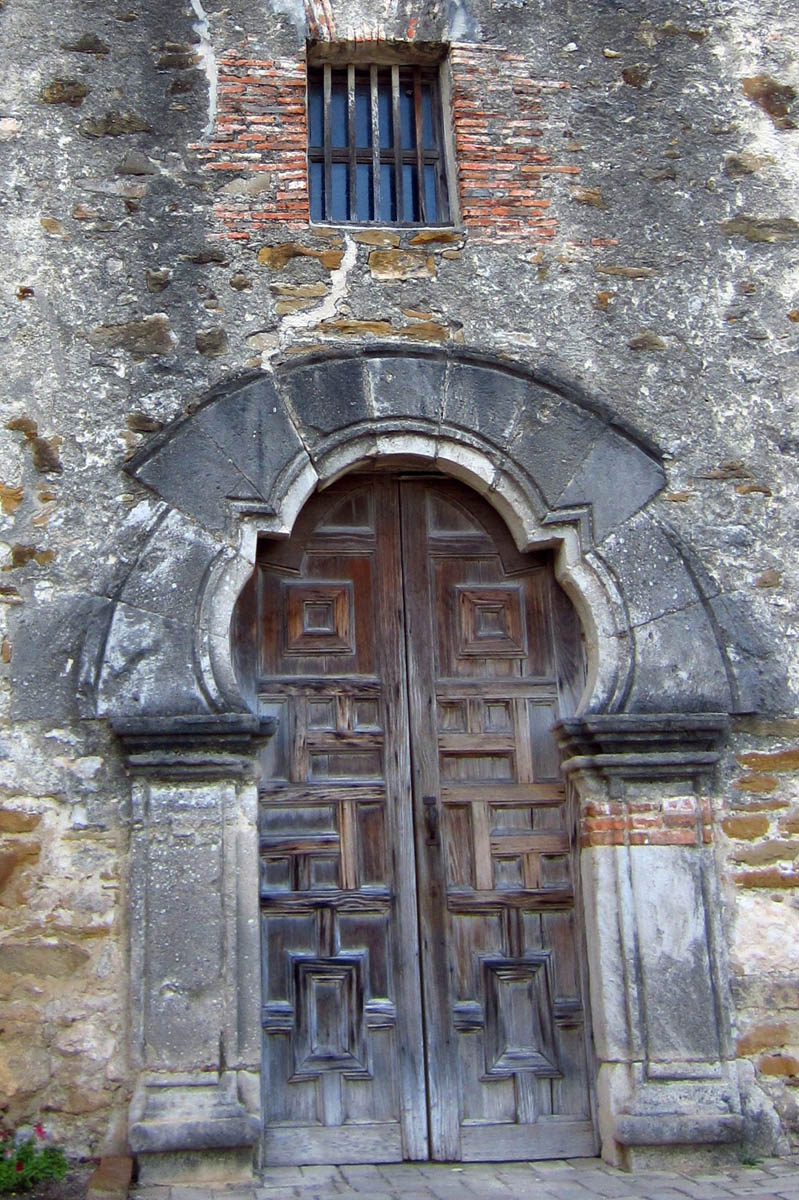 With clouds rolling in and more cold weather on the way, I am grateful for Lynne’s great idea, and the chance to see these three structures in such beautiful light.   The intent is to go back and explore them more in depth……weather and time permitting.