I am reminded over and over that when one must work 9 to 5, five out of seven days a week, one must make the most of the two remaining days as best they can, come rain or shine. I am reminded of this over and over, because the vast majority of my friends and family no longer work 9 to 5. 😉 So with the first of my two days off having turned cold and rainy, and the second day reserved to drive across the vast expanse of West Texas, I have little choice but to forge on through the rain.

As Lynne and I are “on our mission,” I observe a terrific bike path that runs alongside the San Antonio River connecting each of the four missions, running all the way to the Alamo and River Walk in downtown.  I make it my “follow-up mission” to ride as much of this trail as time permits. The seventeen miles are mapped in sections; Museum Reach, Downtown Reach, Mission Reach, etc., with the Mission Reach being approximately ten miles, which I hope to cover on Saturday. 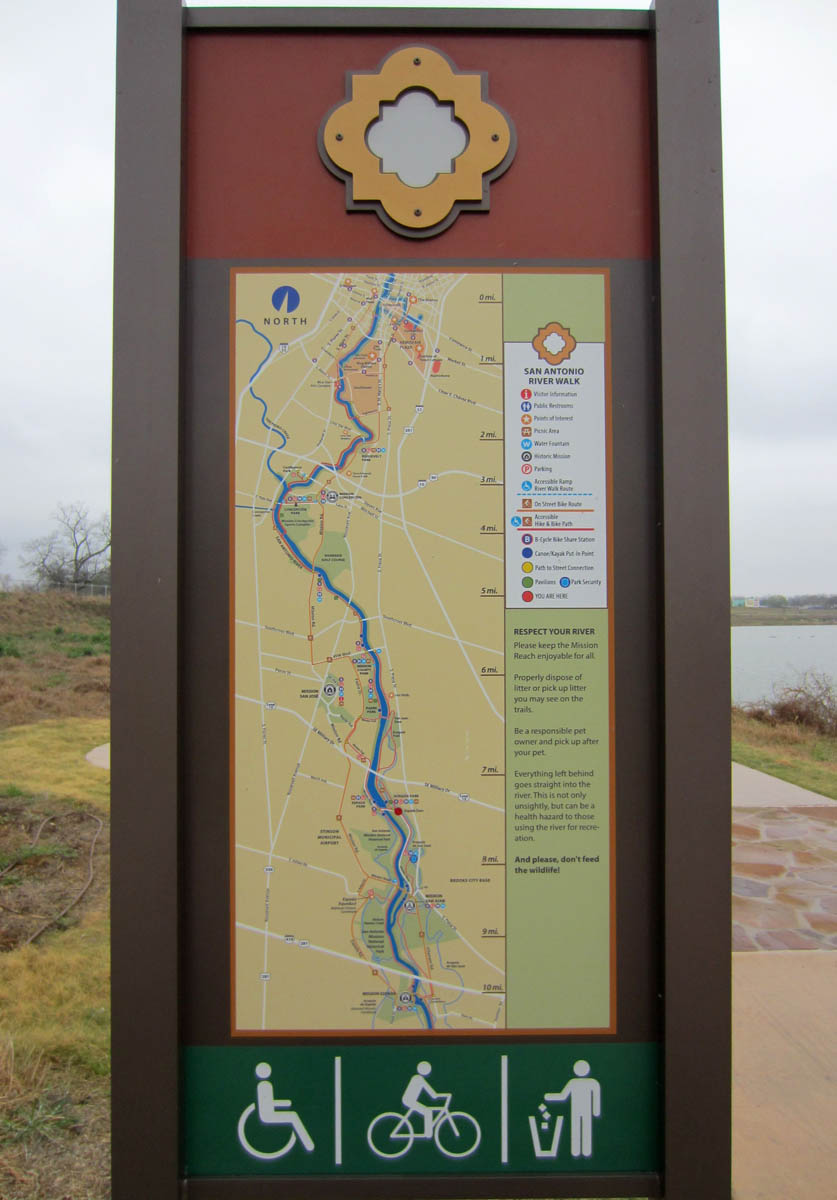 I wake up to the sound of “drip, drip, drip,” which can only mean one thing….rain pouring off my roof, collecting in my awning, and dripping onto the metal RV stairs. DAMN! I have missed my small window of opportunity before the rain begins rolling in. As I lay in bed pondering that this is my last morning in San Antonio, and I am going to get NO exercise tomorrow except for turning the steering wheel, I decide to go for it.  In order to fake myself out and pretend I am not getting soaking wet, I put on my best “wicking” clothing and my “breathable” windbreaker that makes me look warm and dry, of which I am neither. Riding a bike in the rain can be a bit risky, but the bike path is a nice paved, flat trail. And besides, I will ride slowly and wear my helmet. No banking curves today…

First stop is the breakfast taco drive-thru, just a block from Dixie Kampground. I relive my early days from Corpus Christi by ordering simply a “bacon, egg, and bean” in the drive-thru to eat along the way. (No photos – too messy!) 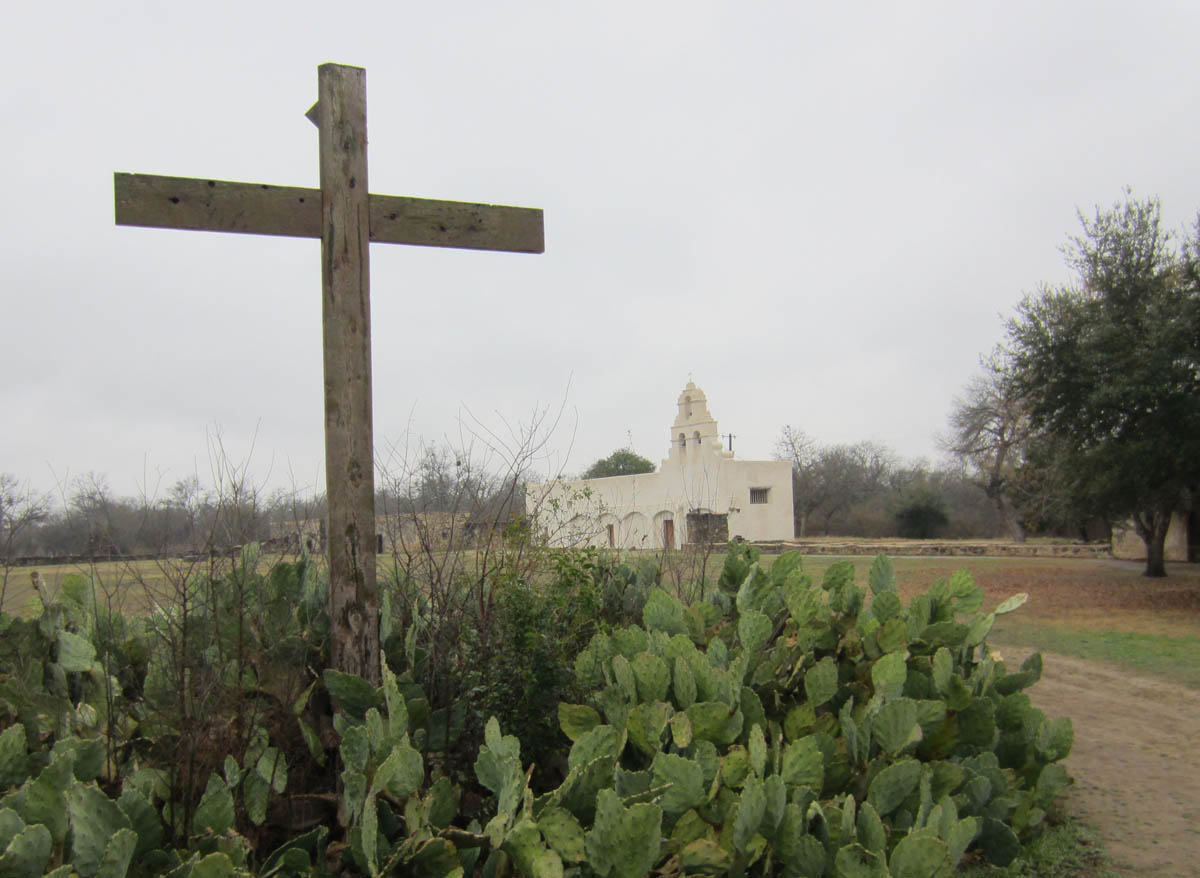 The closest trail head to my exit is Mission San Juan, 1731. Having undergone reconstruction in the sixties, it has a more modern appearance than the others, and therefore the least photogenic of all the missions. With the ominous clouds in the sky, I duck through the gate for a quick picture, but decide not to spend time touring the grounds.  Instead, I hop on the bike and head for the trail. 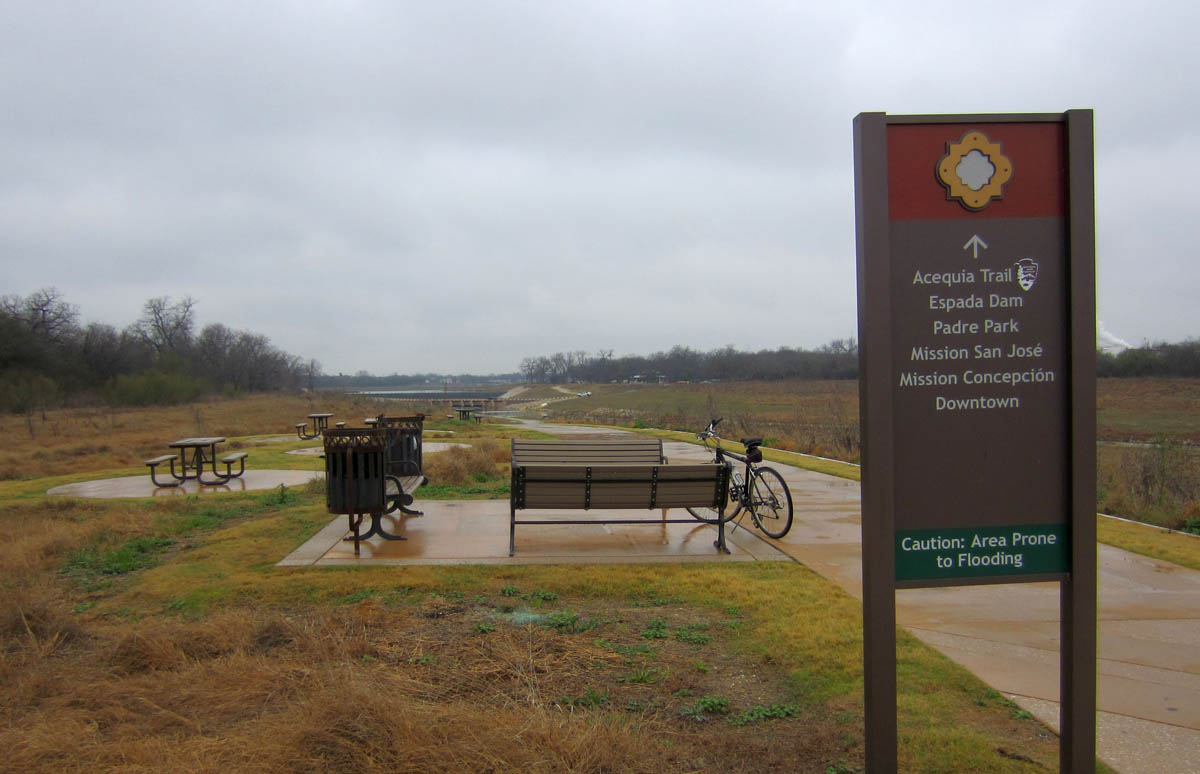 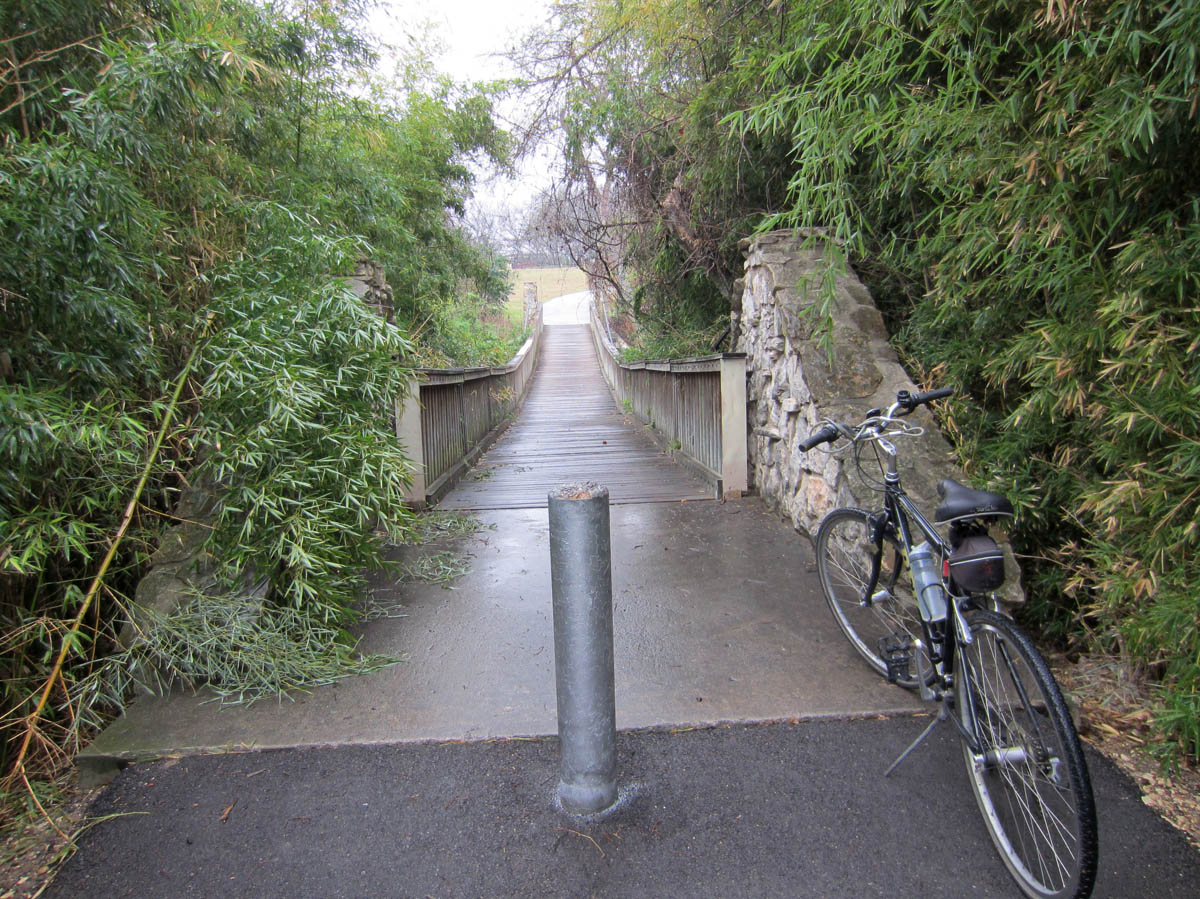 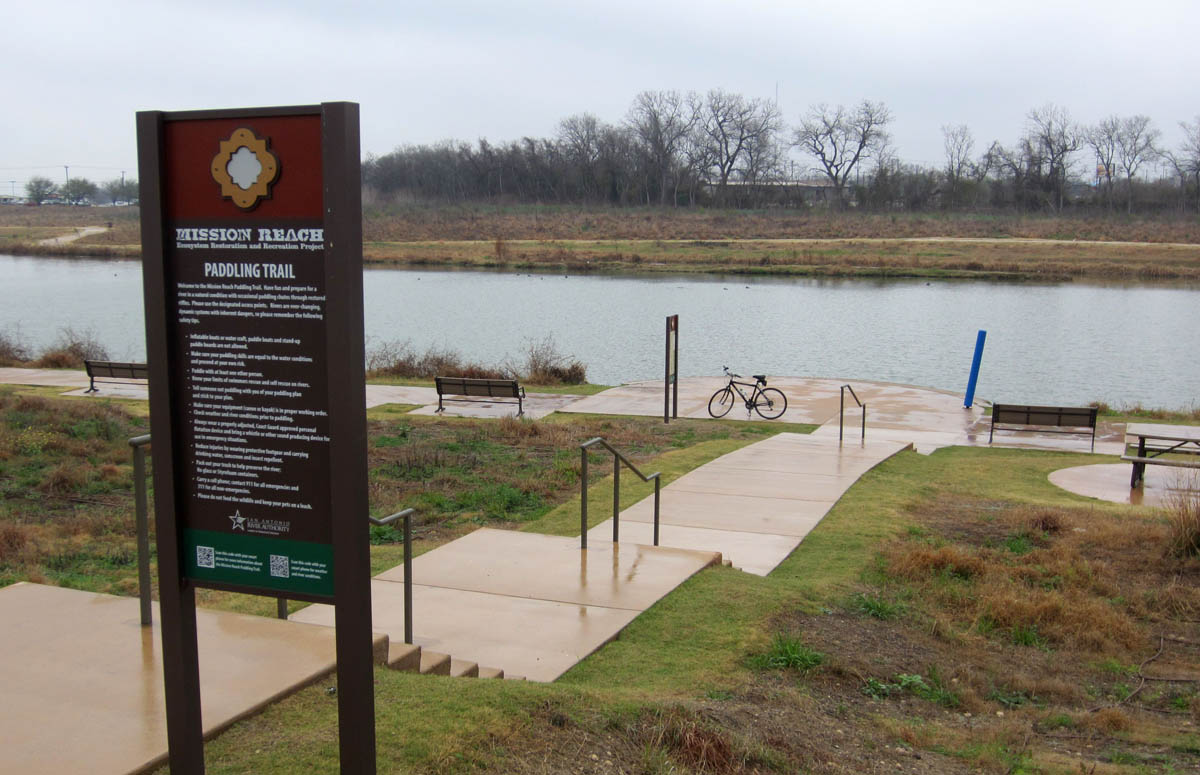 There is a “Paddling Trail” too!

The bike path is perfectly positioned to run through city parks alongside the river to enable a stop at each of the missions without ever having to ride on the streets. According to NPS.gov, special care was taken to reinforce the importance of the river to the missions, and to ensure a seamless transition between the Mission River Walk and the historic sites. There are “self-serve” bike rental stands at every stop. 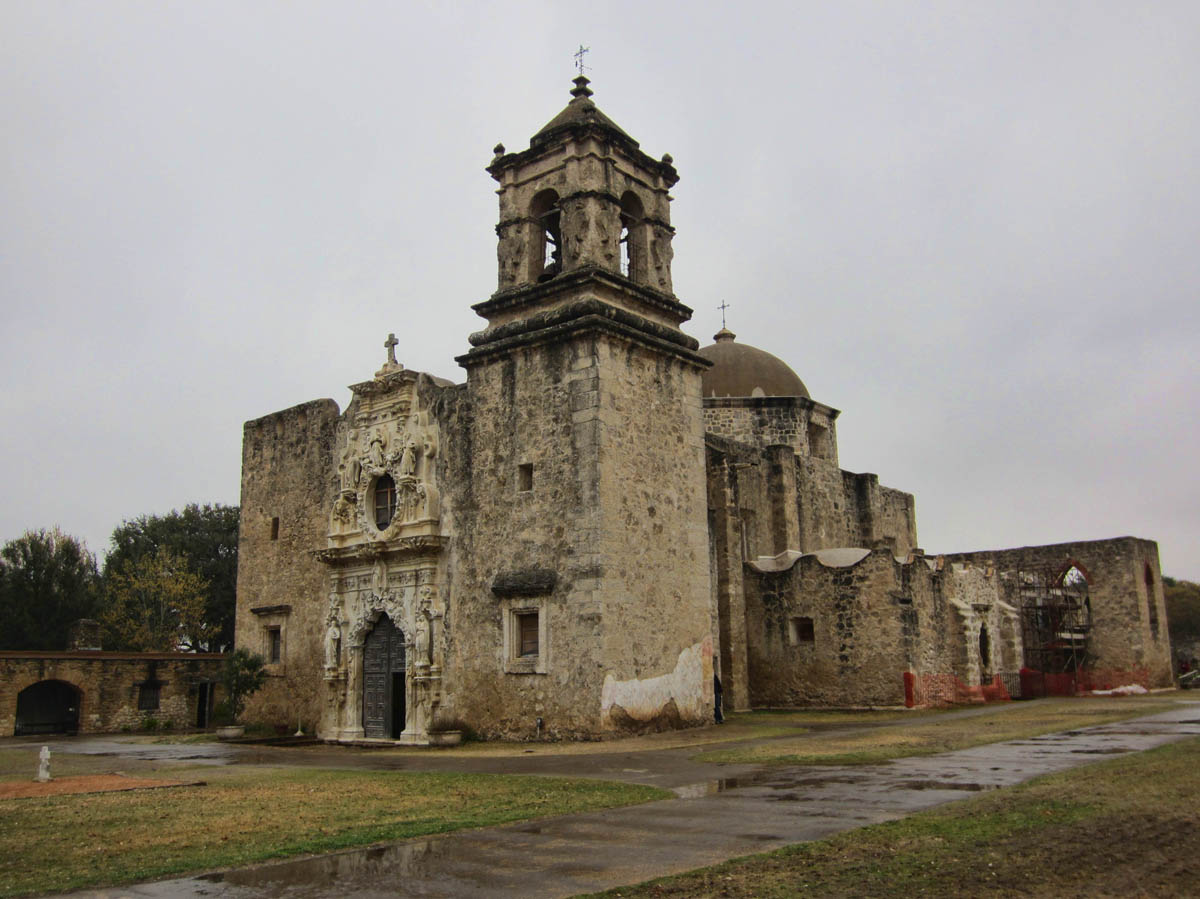 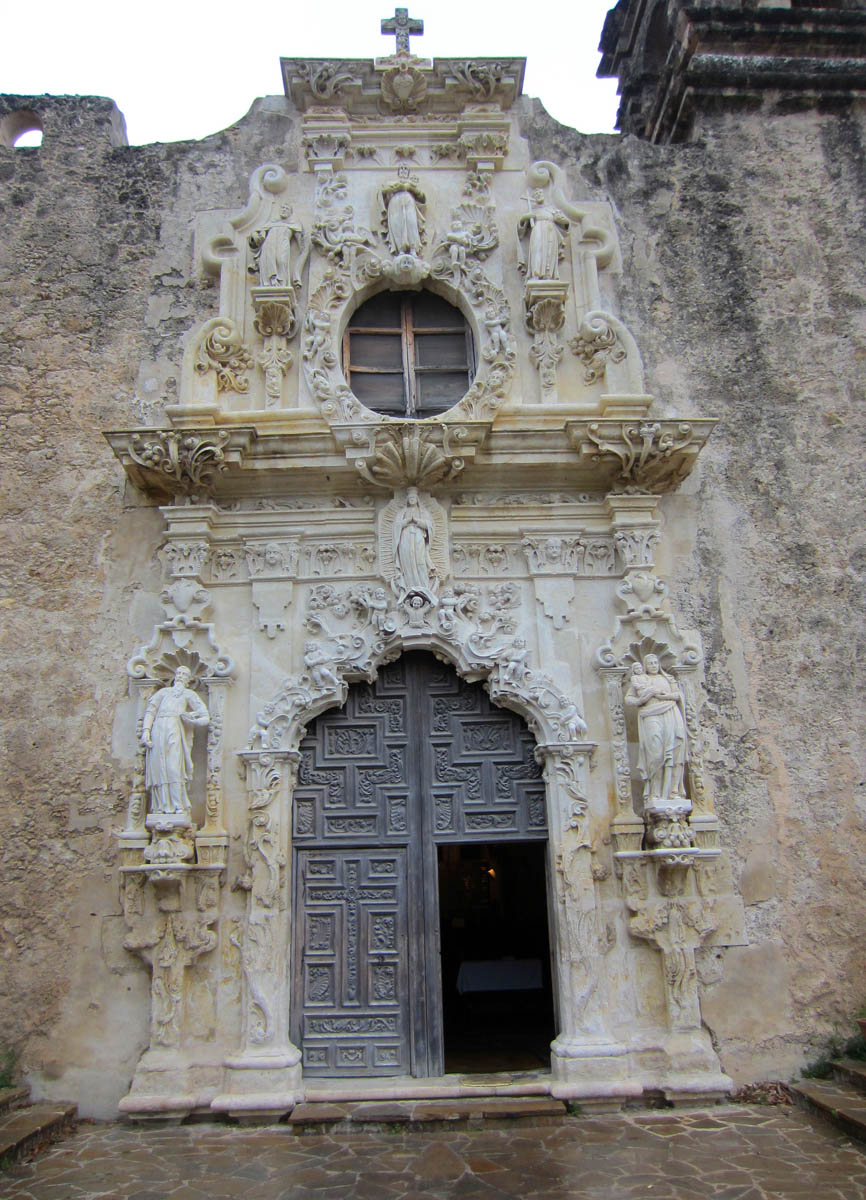 I want to return to the beautiful Mission San Jose’, 1720, known as “Queen of the Missions.” This is the structure Lynne and I attempted to visit in our sundown caper, but the surrounding gates were locked. So I hope to make this mission before the rain gets heavier.

Having long aspired to be a National Park Ranger, I stop in the Visitor’s Center just long enough for a little “volunteer work,” then head out to the courtyard to explore the grounds. 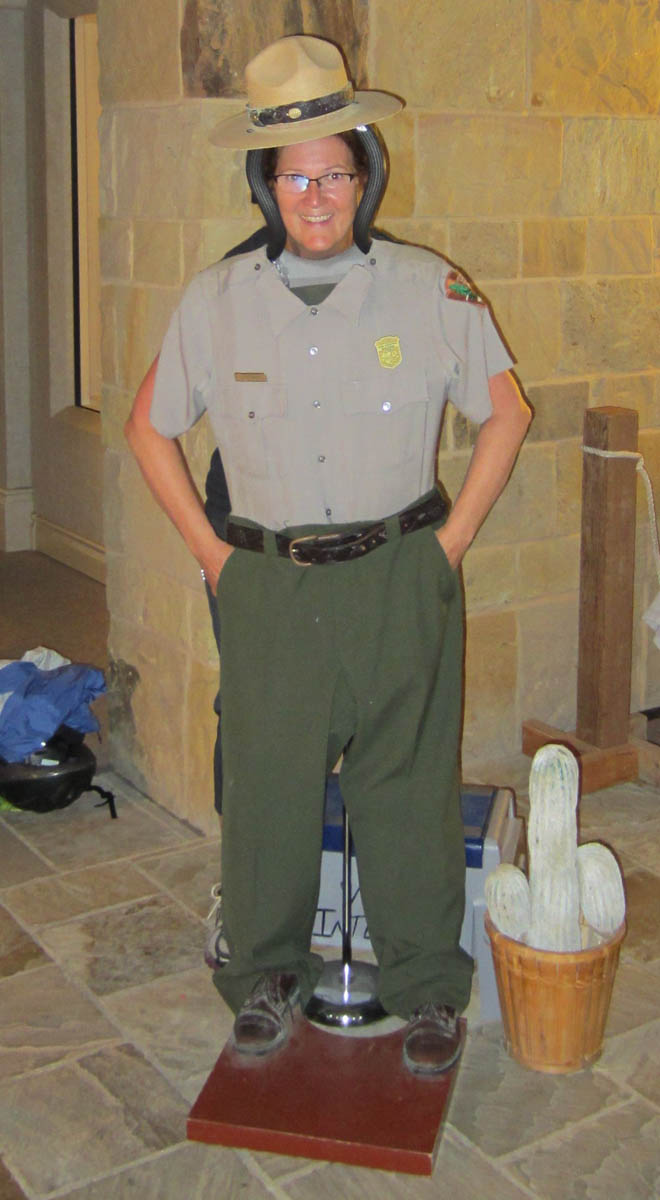 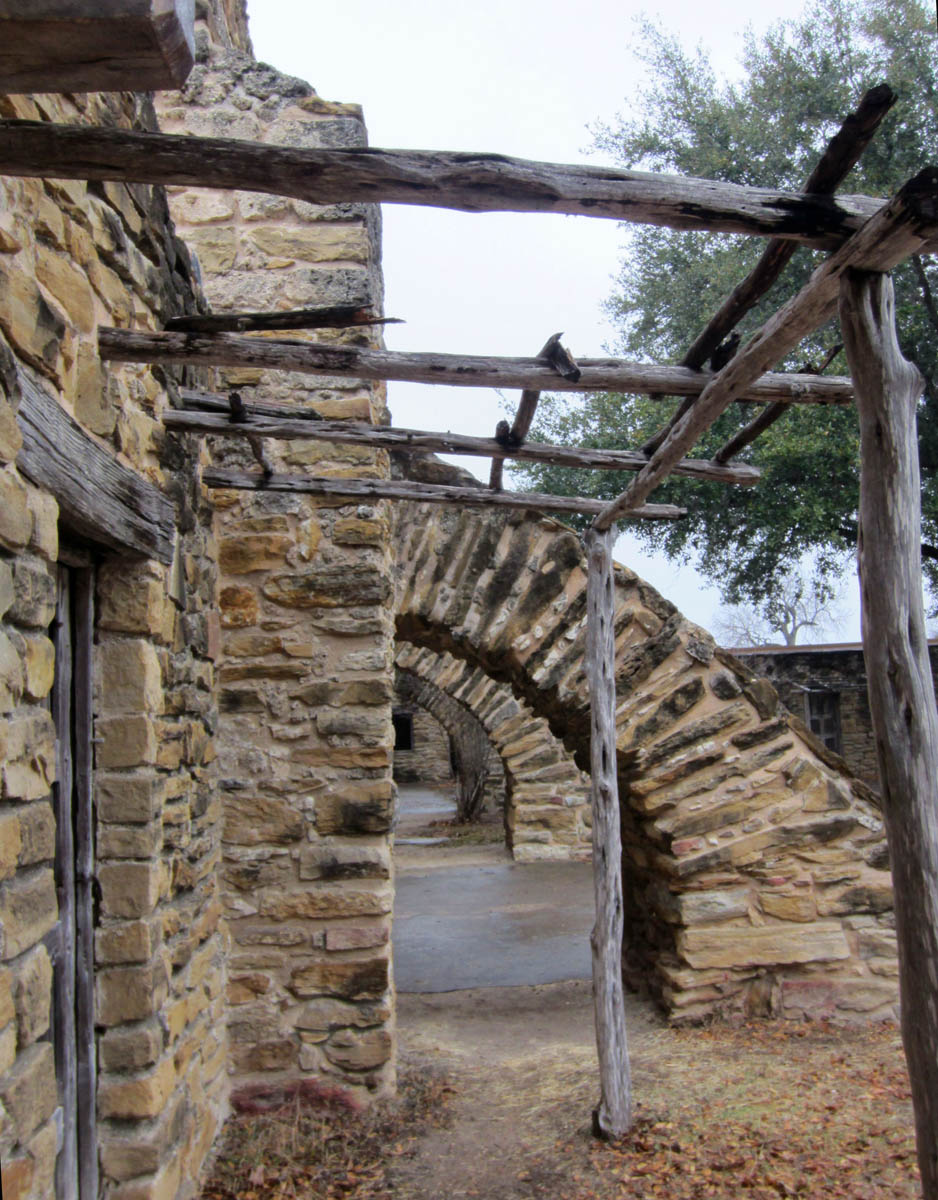 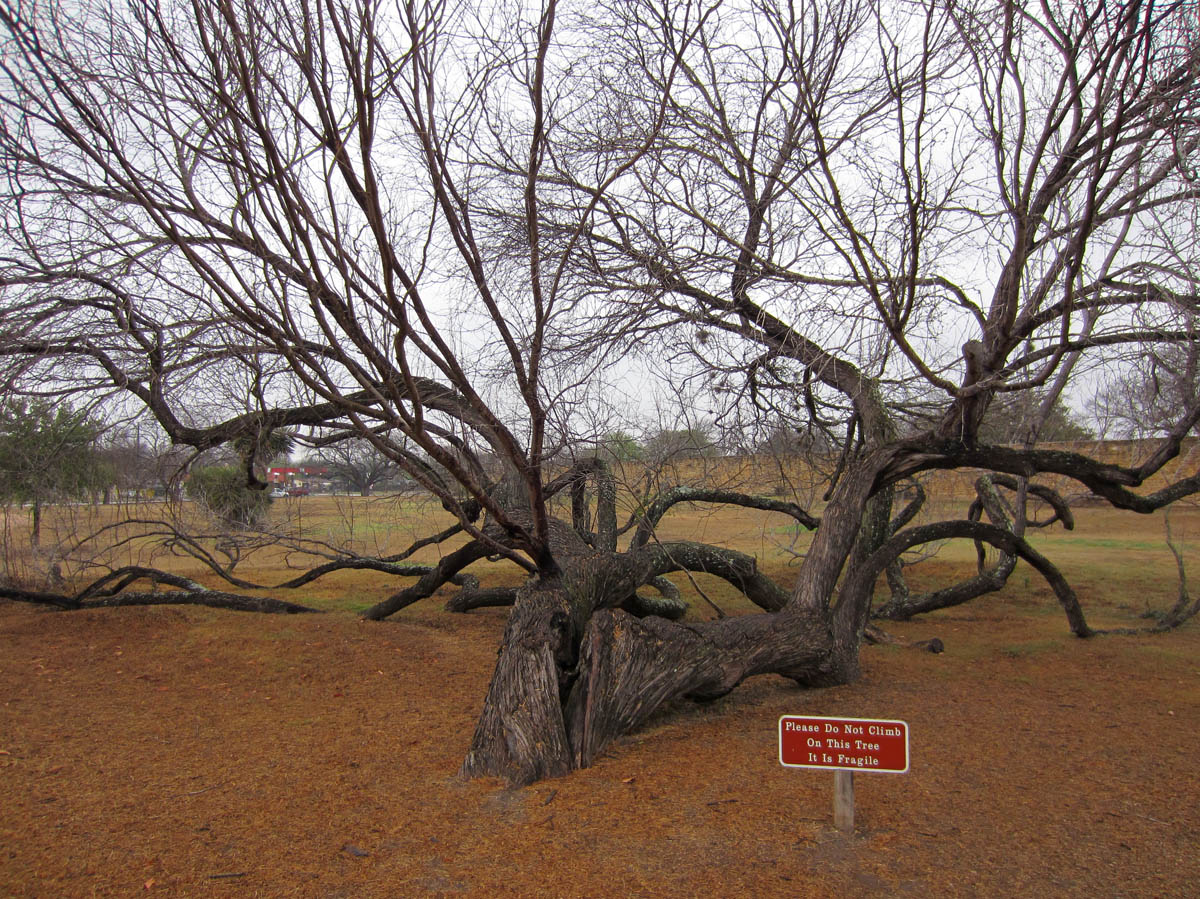 Mission San Jose’ is the largest of all the missions, and I believe it to also be the most beautiful. It is a pity the photos don’t do it justice, as I am not only battling bad light, but with the misting rain now growing heavier, I am also trying to dodge huge umbrellas. 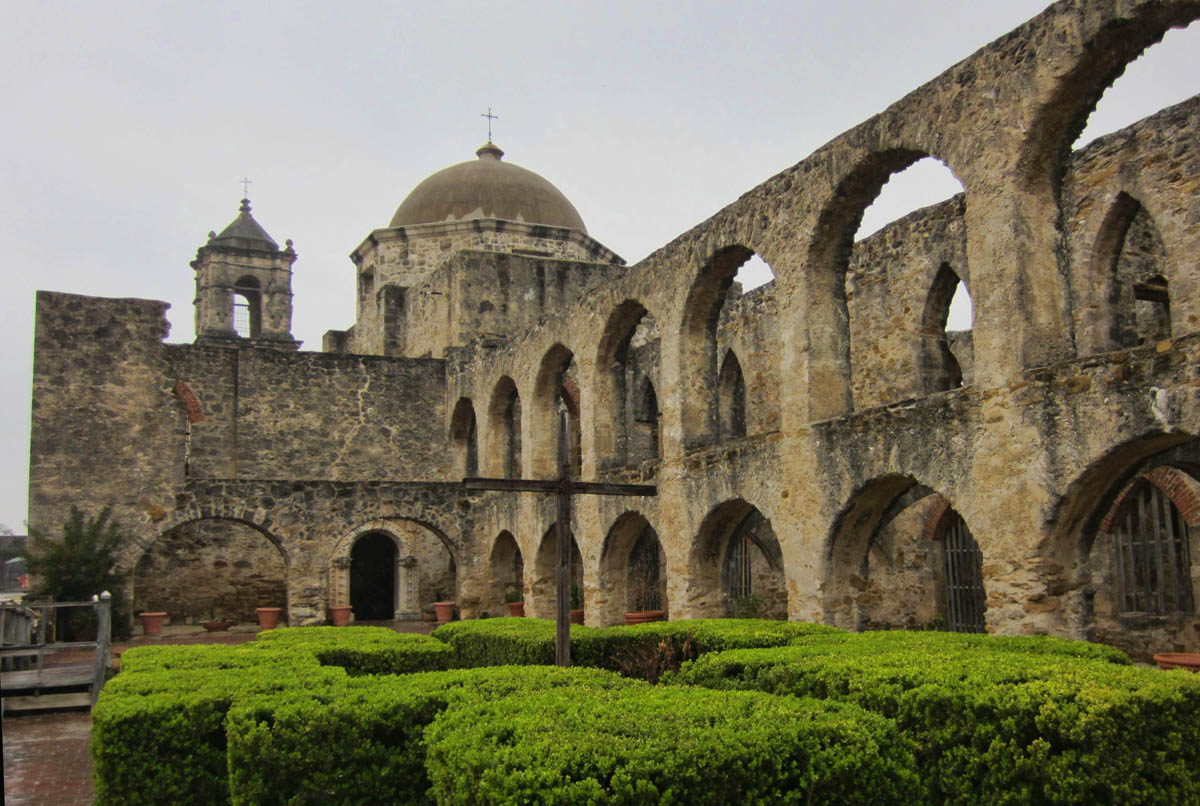 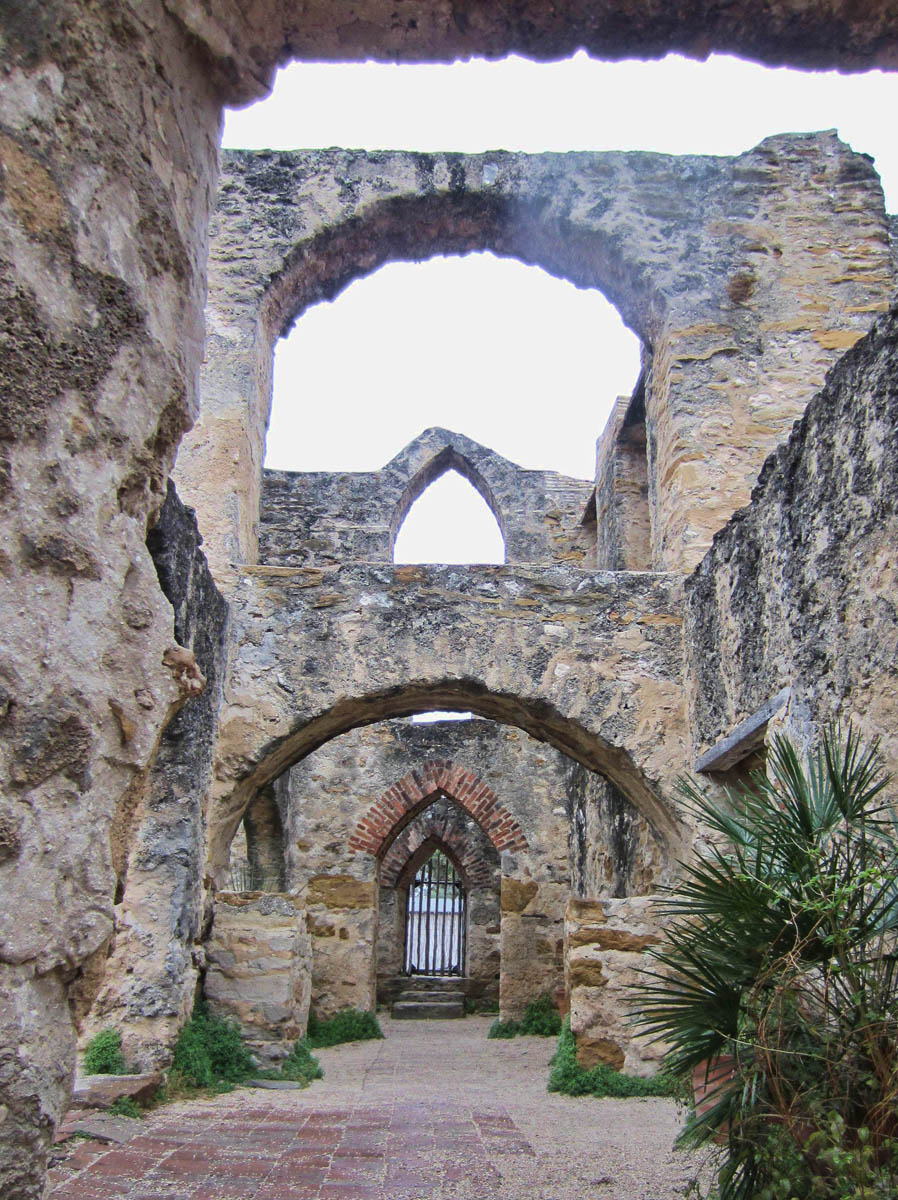 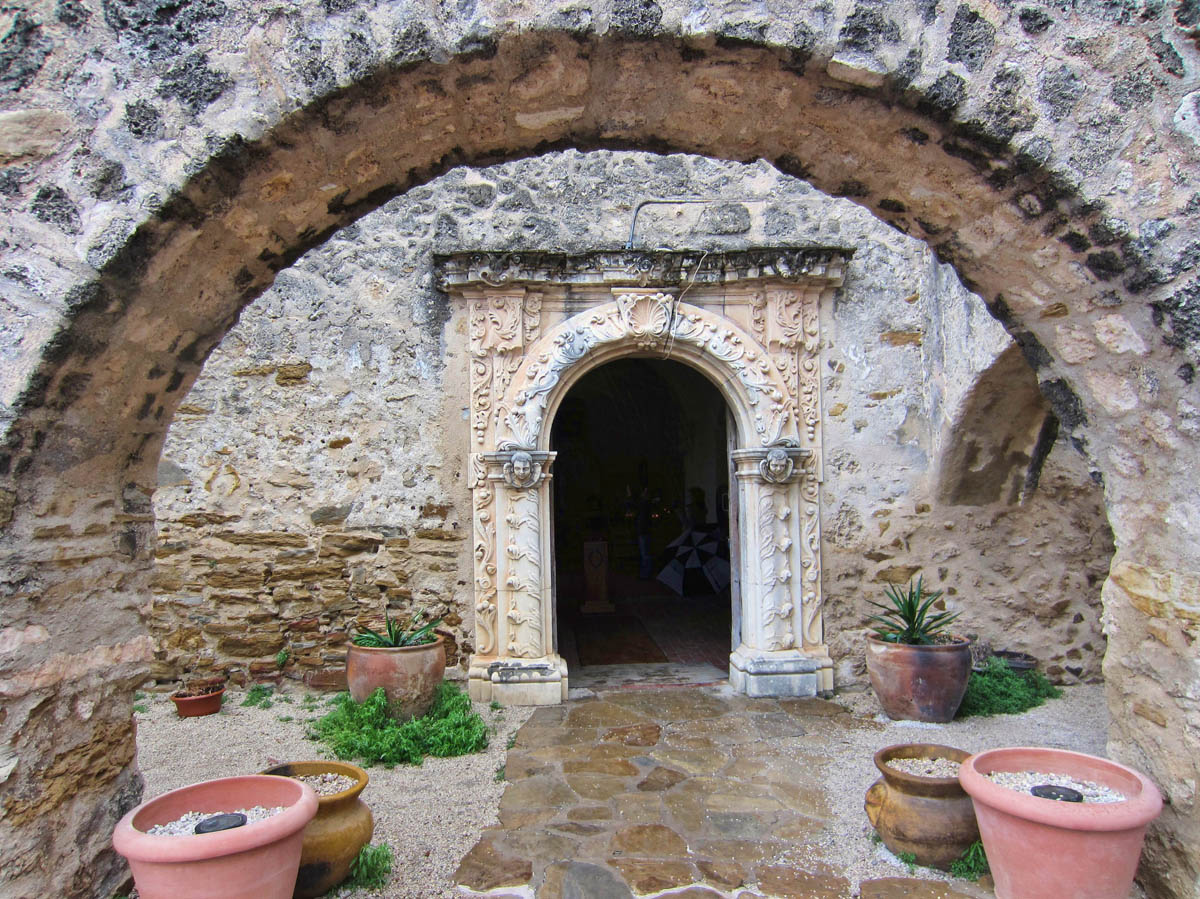 One of the most famous attractions of the church is “La Ventana Rosa,” or the Rose Window. Legend has it that it was named for Rosa, the architect’s betrothed, who was lost at sea on her way over from Spain. 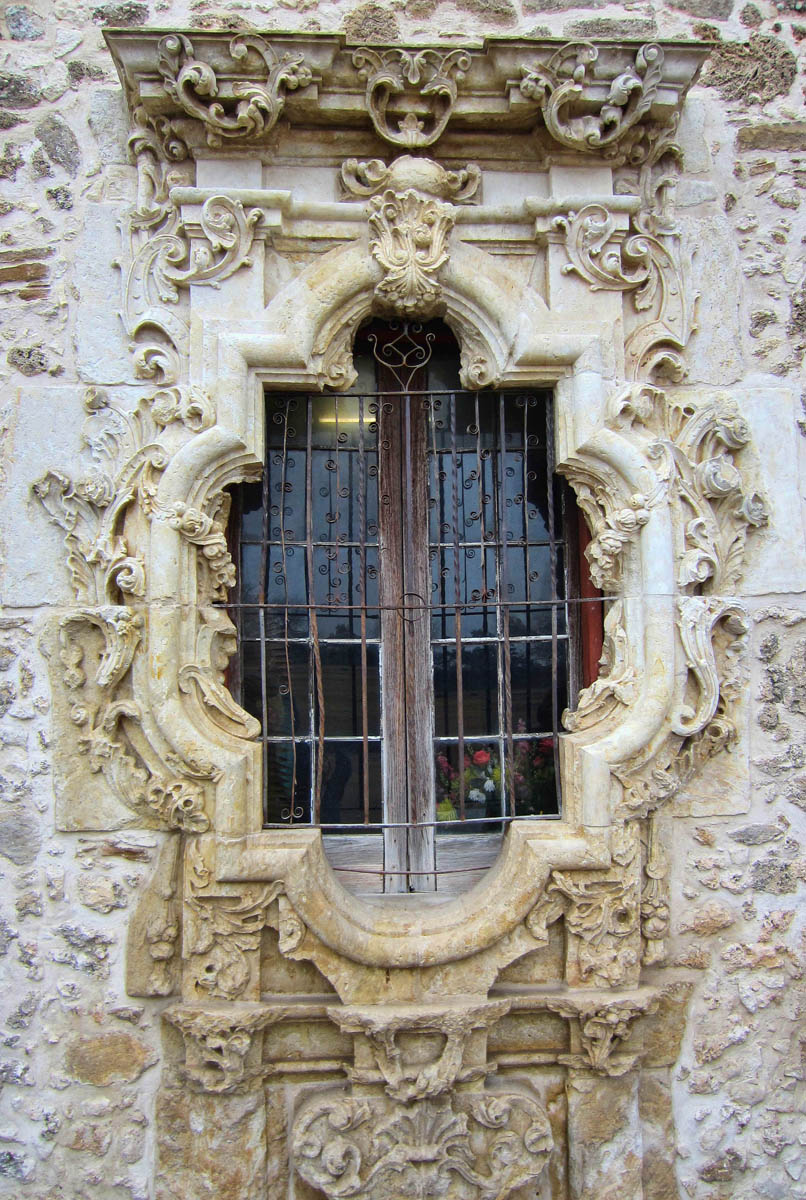 “La Rosa Ventana”, a tribute to Rosa, or just the “Rose Window?” 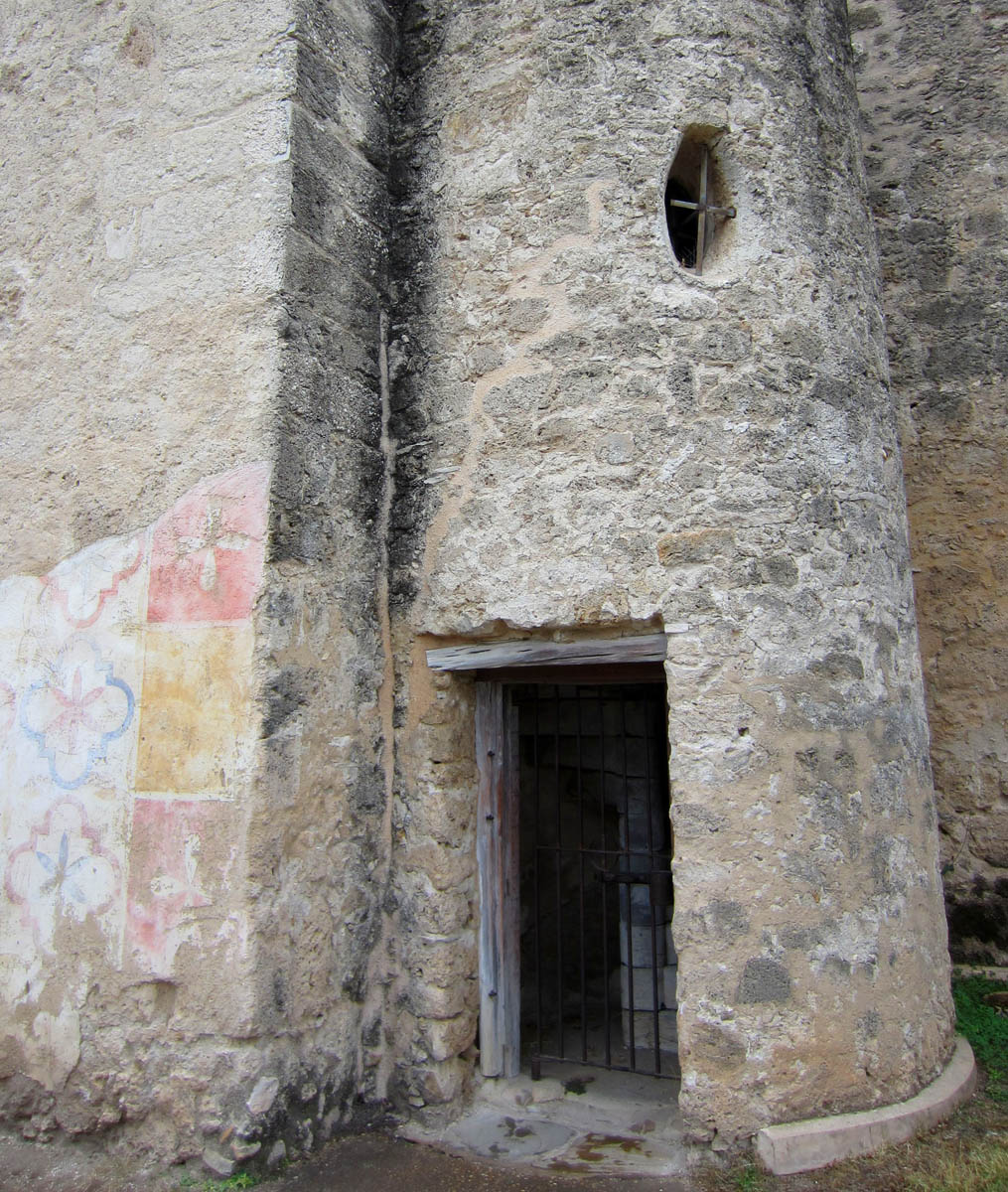 The outside walls were once covered in frescoes, which can be seen in the lower left of the photo.

The inside of the church is rather plain by comparison to the outside. It is also now filled with a large tour group seeking shelter from the rain, so I hop on the bike and hope to make it the four miles to the final mission stop, Concepcion. 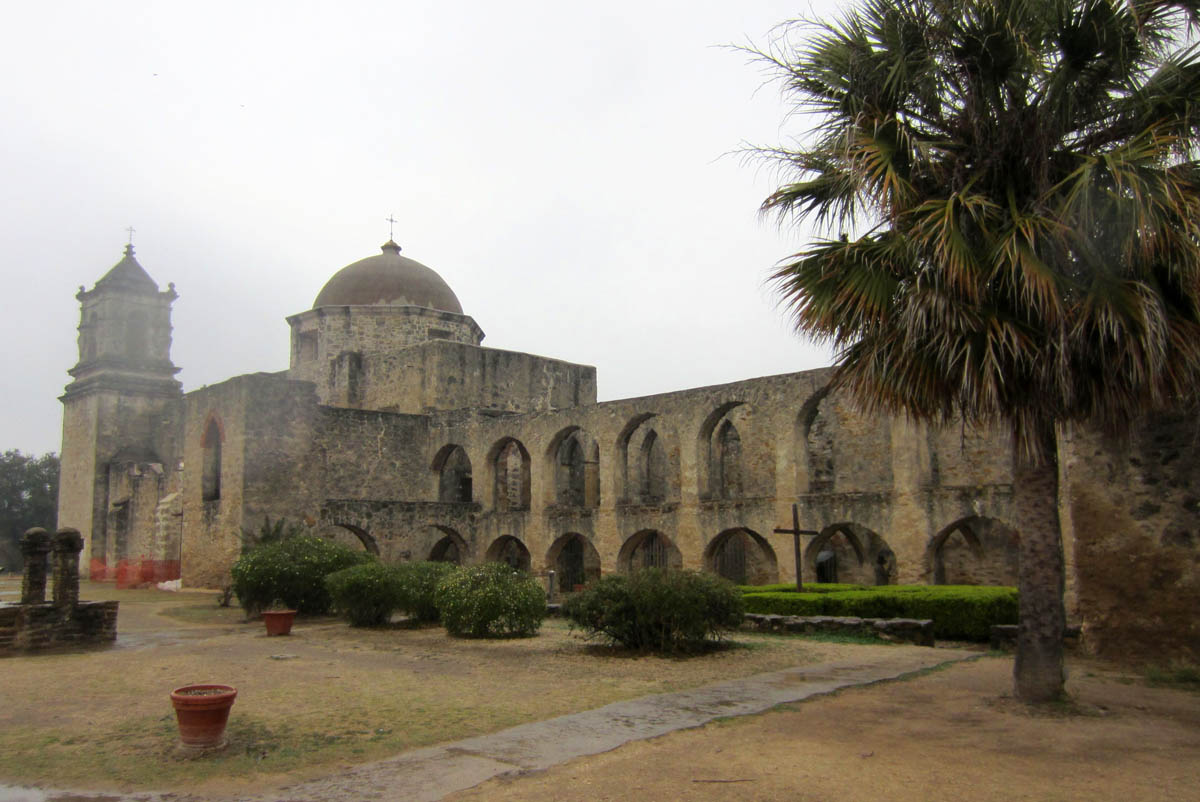 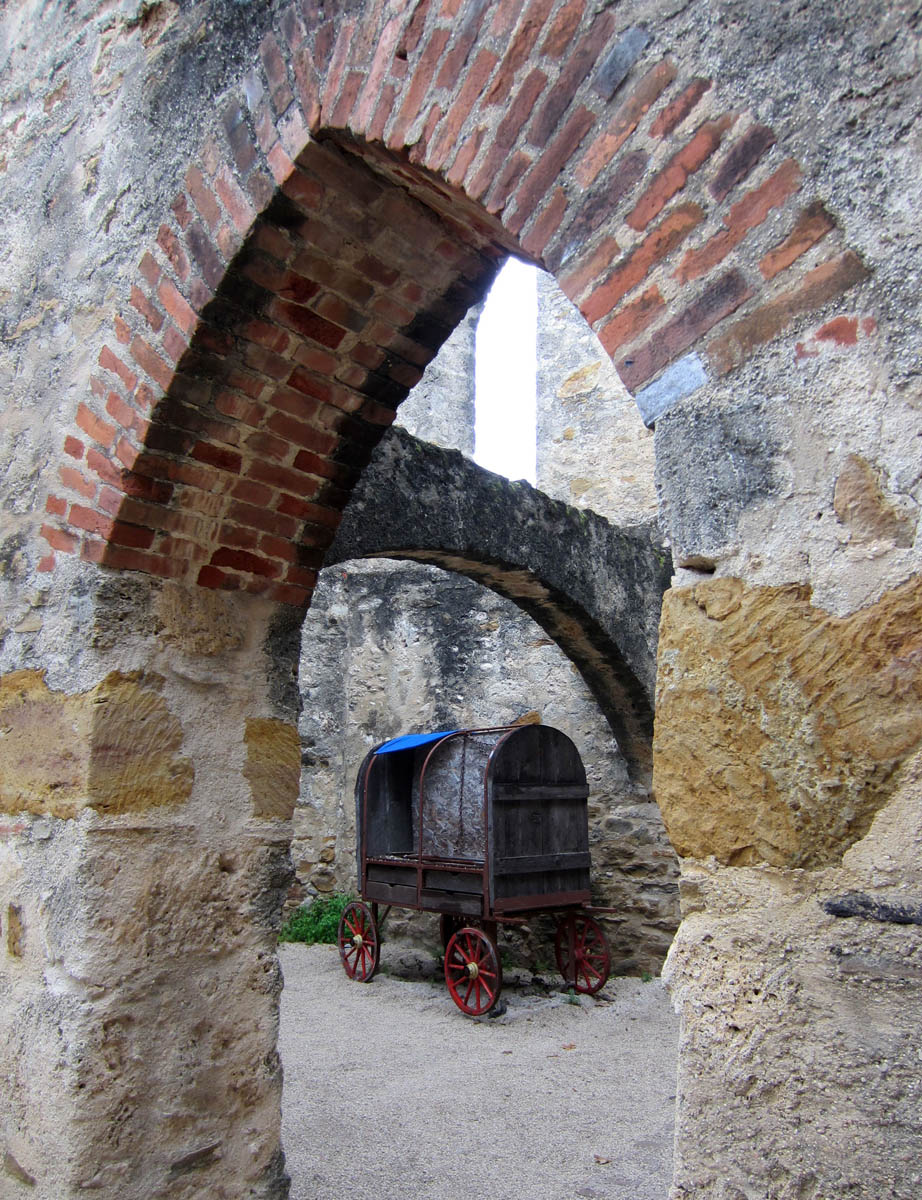 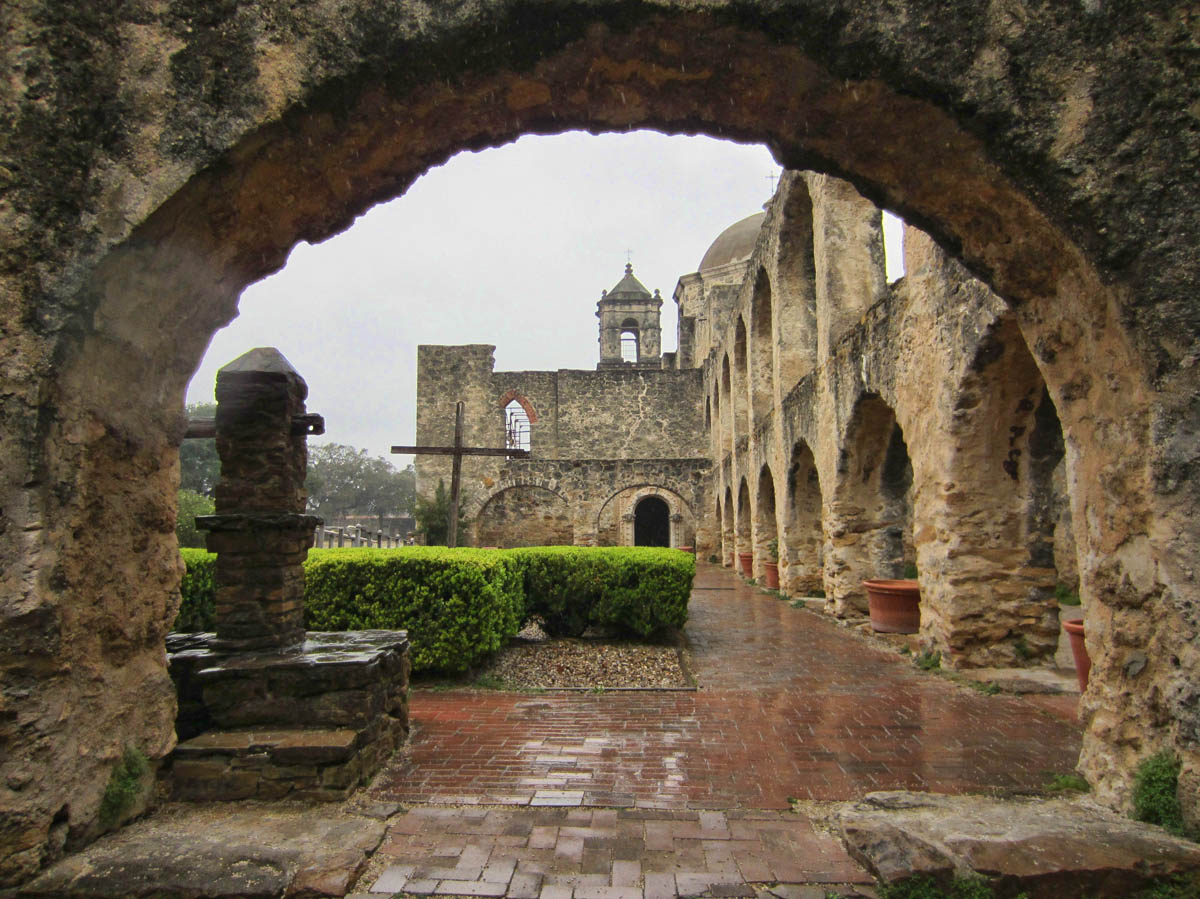 As I ride through several parks and beautiful picnic spots along the river, the rain starts really pelting.  At this point, I can’t get much wetter, but if I don’t get dry soon, my teeth are going to start to chatter. So I make a U-turn and race back towards the Tracker.  Having only completed half the job, I retreat to the warmth of the Winnie, and in the tradition of another infamous Texan, I hereby declare, “Mission Accomplished!”

4 thoughts on “Follow-Up Mission, aka “We’re On A Mission, Part II””