Just about twenty minutes east of Catalina State Park in the Coronado National Forest is the pretty little Sabino Canyon.    I visited there on the recommendation of the same Park Ranger who recommended I divide my time in Tucson.  Still trying to warm up to the “other side of Tucson,” I figured I should reserve judgment until I had explored his favorite recommendation.

A four-mile paved road runs the length of the canyon.  This road is closed to all vehicular traffic with the exception of the Sabino Canyon Tours Tram.  This noisily narrated nine-stop tram runs every half hour up until 4:30pm, with passengers embarking and disembarking at one to nine stops all along the route.  My typical “after the workday” arrival proved to be fortuitous, as I caught the next-to-last tram up the hill, with the intention to walk the four miles down.   As with Saguaro National Park, the park “closes” at sunset, but once you’re in, you can stay as long as you like, as long as it is on foot or bike.  The crowds were all moving toward the exit, yet it was three hours till sunset, so I had plenty of time. 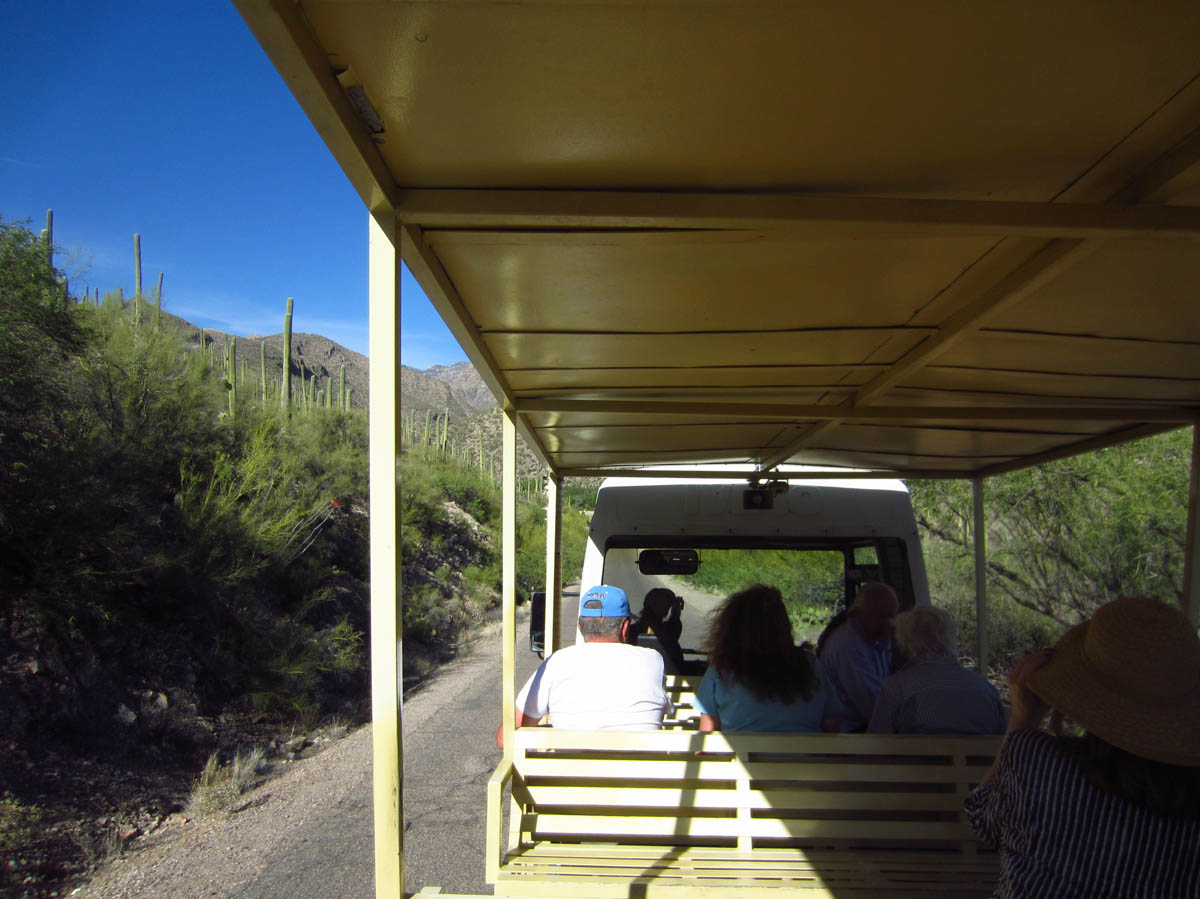 Sabino Canyon Tours Tram heads up the canyon every half hour. 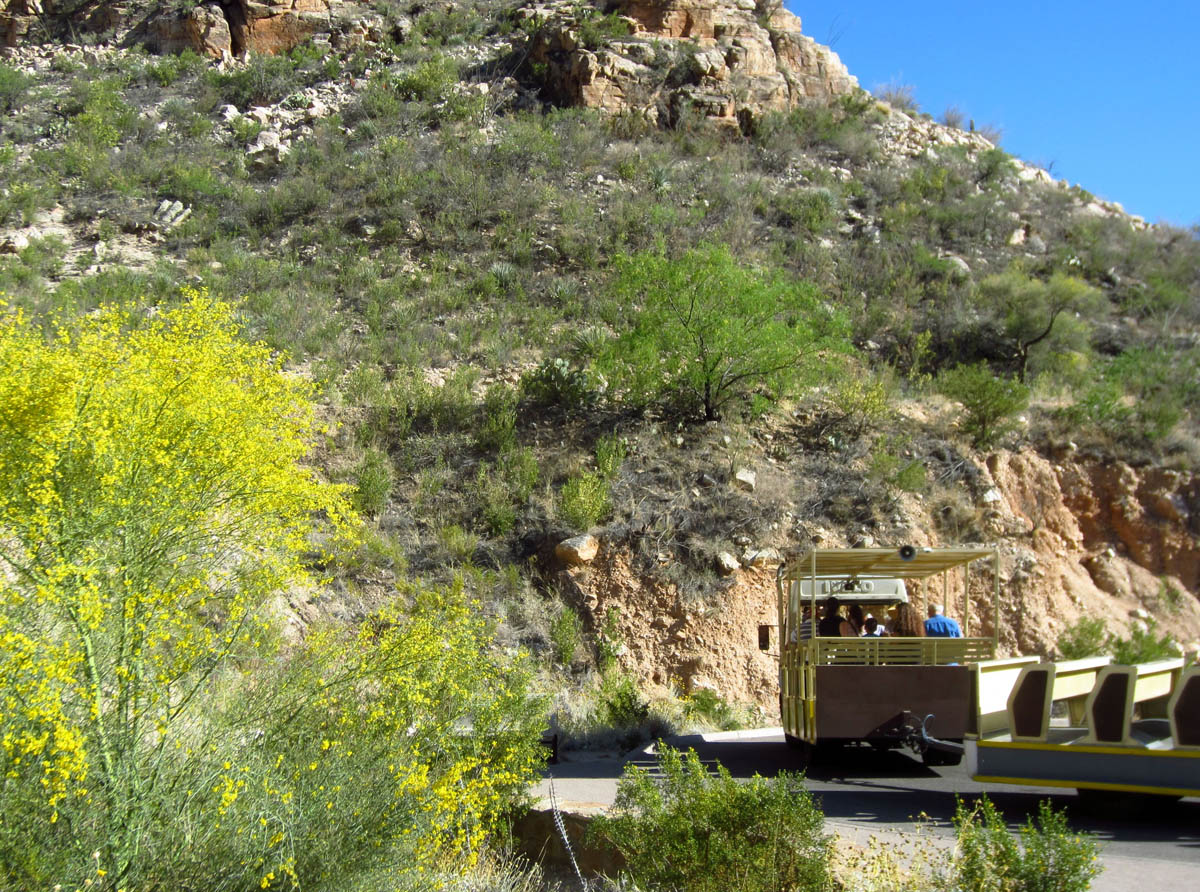 The last tram of the day heads back down the mountain… 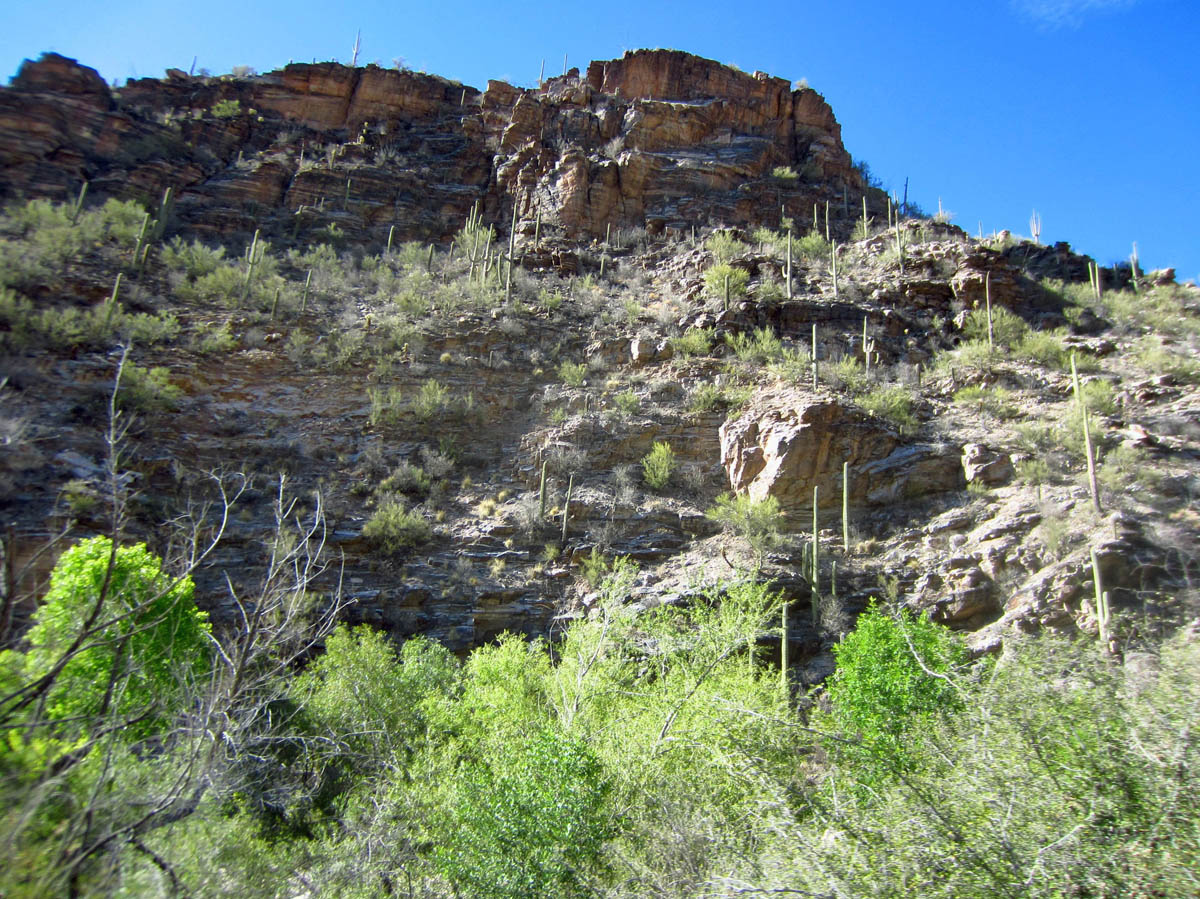 As I started my walk down, the late afternoon sun lighting up the canyon walls was just spectacular.  Please trust me when I say the photos don’t do it justice.  I was in heaven, as everyone had now left the top of the canyon, making their way down either by foot or by the last tram, so I felt a sense of solitude as I lingered at the top, enveloped by the towering canyon walls that were changing color by the minute. 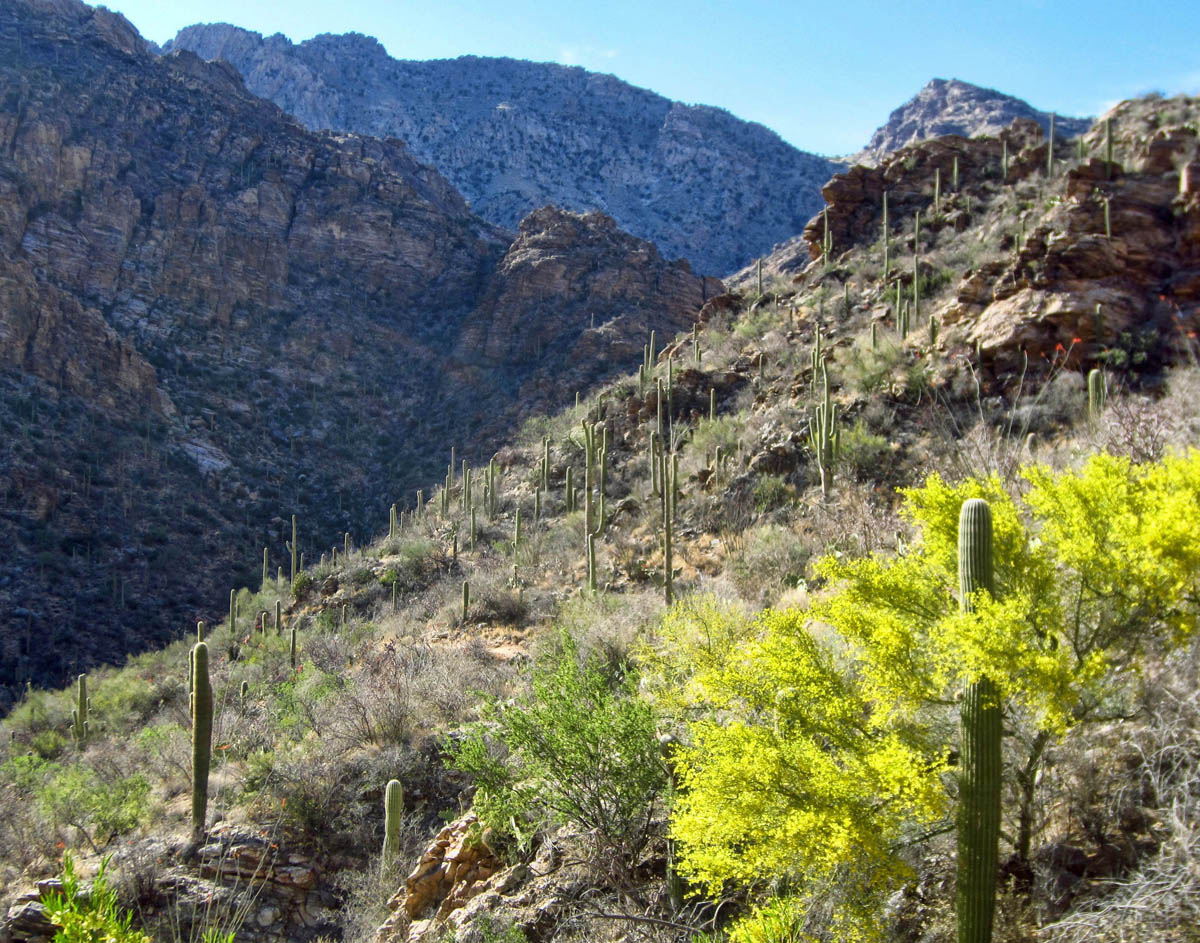 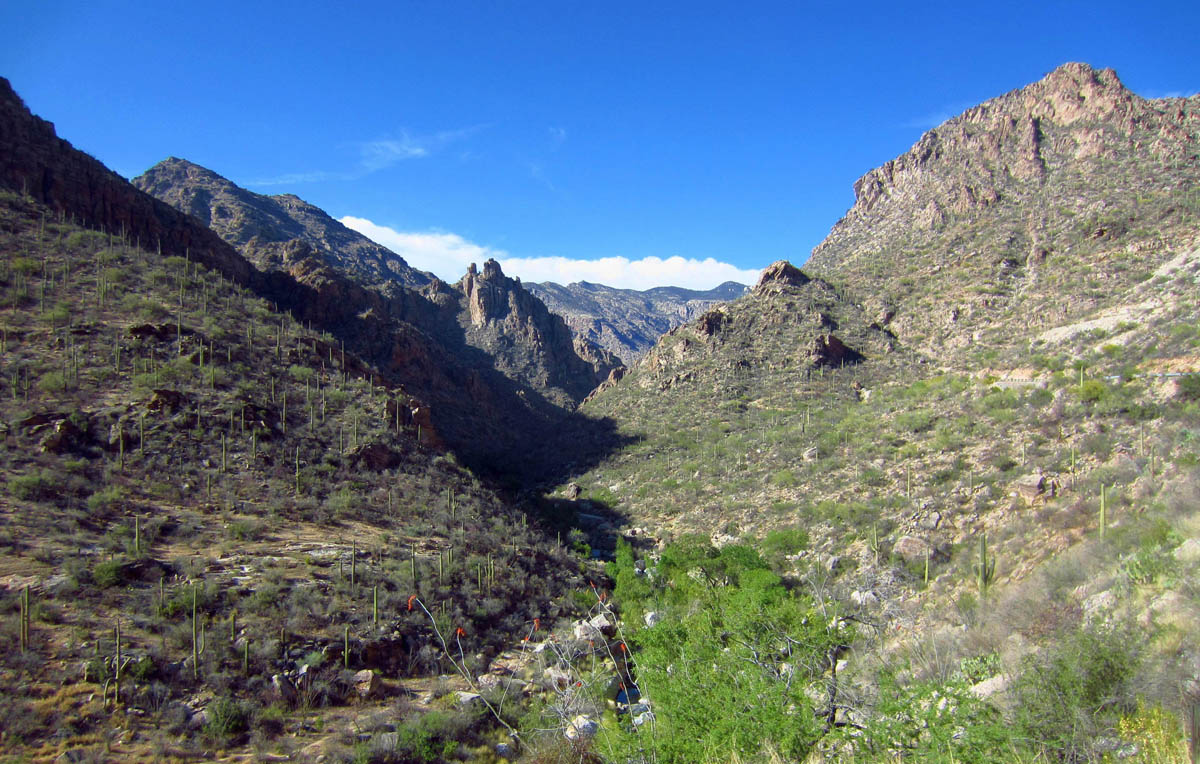 As I began to meander down the mountain, I stopped alongside a creek by a small waterfall, where I paused to take a few photos and soak up the sounds of the trickling water.   I caught a glimpse of movement out of the corner of my eye.   It was a young, dark haired woman wearing only a sports bra and a pair of low cut jeans.   She was willowy-thin and dark skinned.   Her neck was adorned with strands of Native American-style jewelry…beaded silver, turquoise, feathers dangling from the ends of small leather thongs.  The instant I saw her, my first impression was that she was Native American, though I later decided she was Mexican.

She startled me as she slipped out from behind a rock, since I thought I was all alone.   I said “Hi,” and she responded back with the same, but quickly disappeared once more.   I hiked a bit further up the stream, and then I saw her again, this time with her shirtless male companion and their dog.  He was young and “wildly handsome,” looking a little like young Charles Manson.

They were both very standoffish at first, but I broke the ice with a remark about their dog’s lack of interest in swimming on such a warm day, which led to a conversation.   They reminded me a lot of the “hippies” on Haight-Ashbury Street that I so wanted to be when I was a twelve year old on our “be sure to wear some flowers in your hair” family road trip to San Francisco.

At first, they said they were just in the canyon for the afternoon, but the more we talked, the more they revealed.   Turns out, they are actually living in the canyon, and only come down from above after the trams stop running. 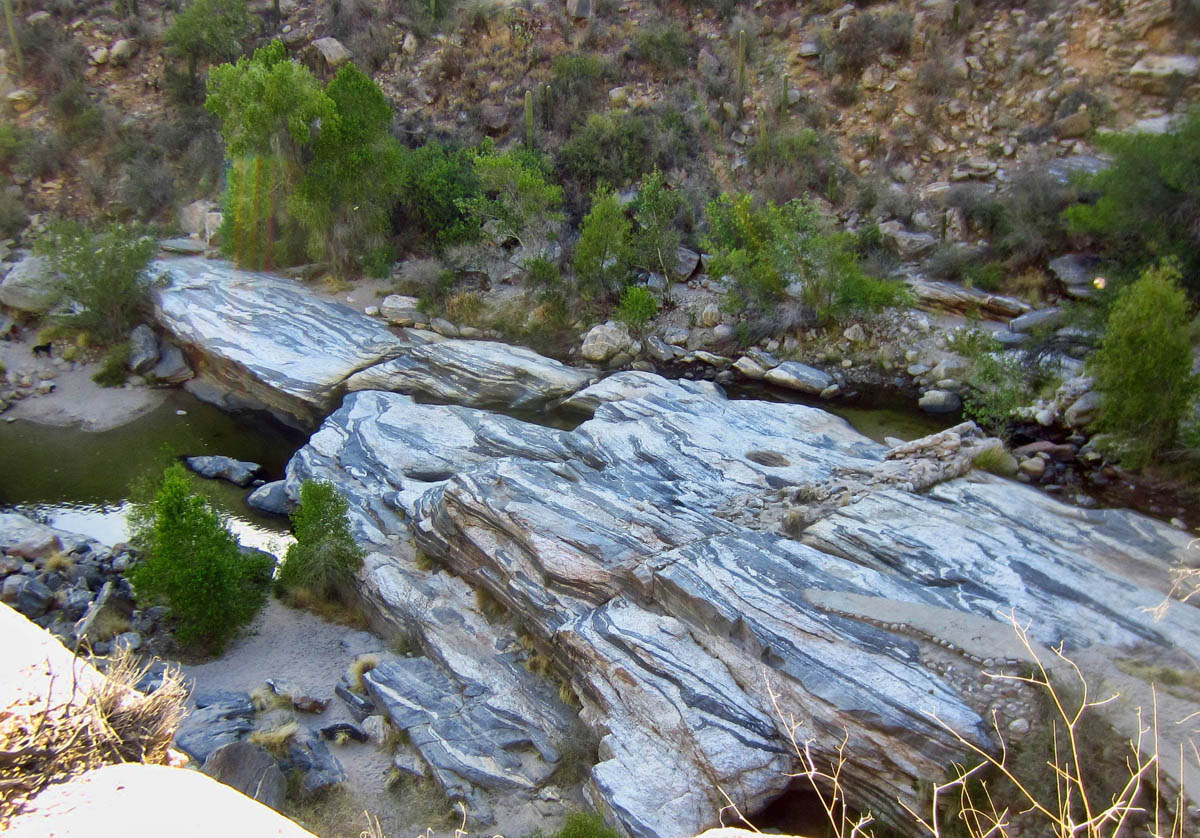 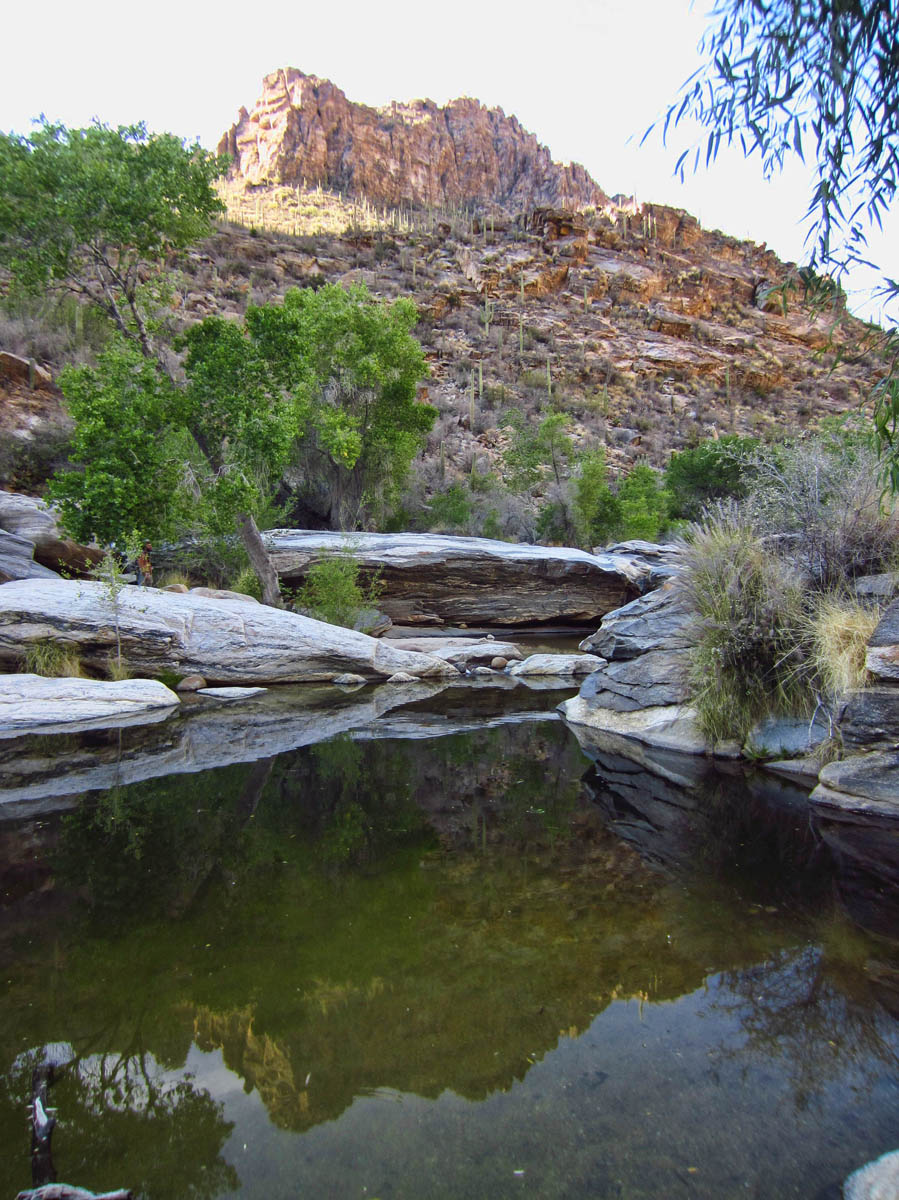 The young woman was absolutely gorgeous….downright stunning.  Except….she had big, one-inch letters “A” and “Z” tattooed on her cheeks in old-style Roman font, one beneath each eye.  This made it next to impossible for us both to make eye contact, me trying hard not to be judgmental, and her, seemingly not wanting to feel judged.    Finally, the more we conversed, the more I found myself wanting to look past the bizarre A to Z tattoos and make eye contact.  Once I did, her eyes locked on like a laser with the familiarity that gave me the eerie feeling that if I had a past life as a Native American, this “being” had been a part of it.  (chill bumps!)

She began to tell me all about living in the canyon, and showed me a basket of buds she had collected from the Cholla cactus.  She had done her research to learn that the Tohono O’odham Indians harvested these Cholla buds, which contain as much calcium as a glass of milk.   She demonstrated how she uses a split rib from the Saguaro cactus as tongs to harvest the buds in the Native American tradition.  She claimed there are more edible plants in the Arizona-Sonora desert than any other place on earth. 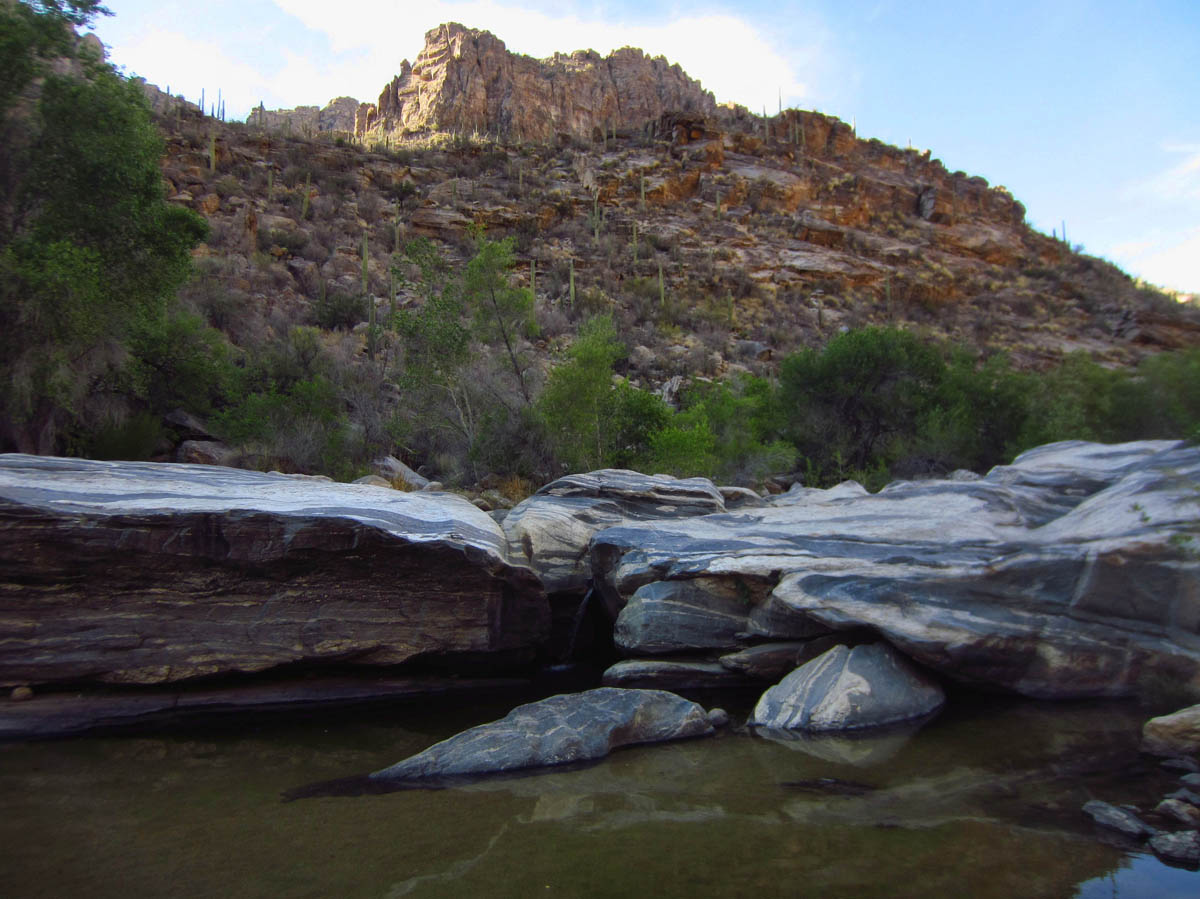 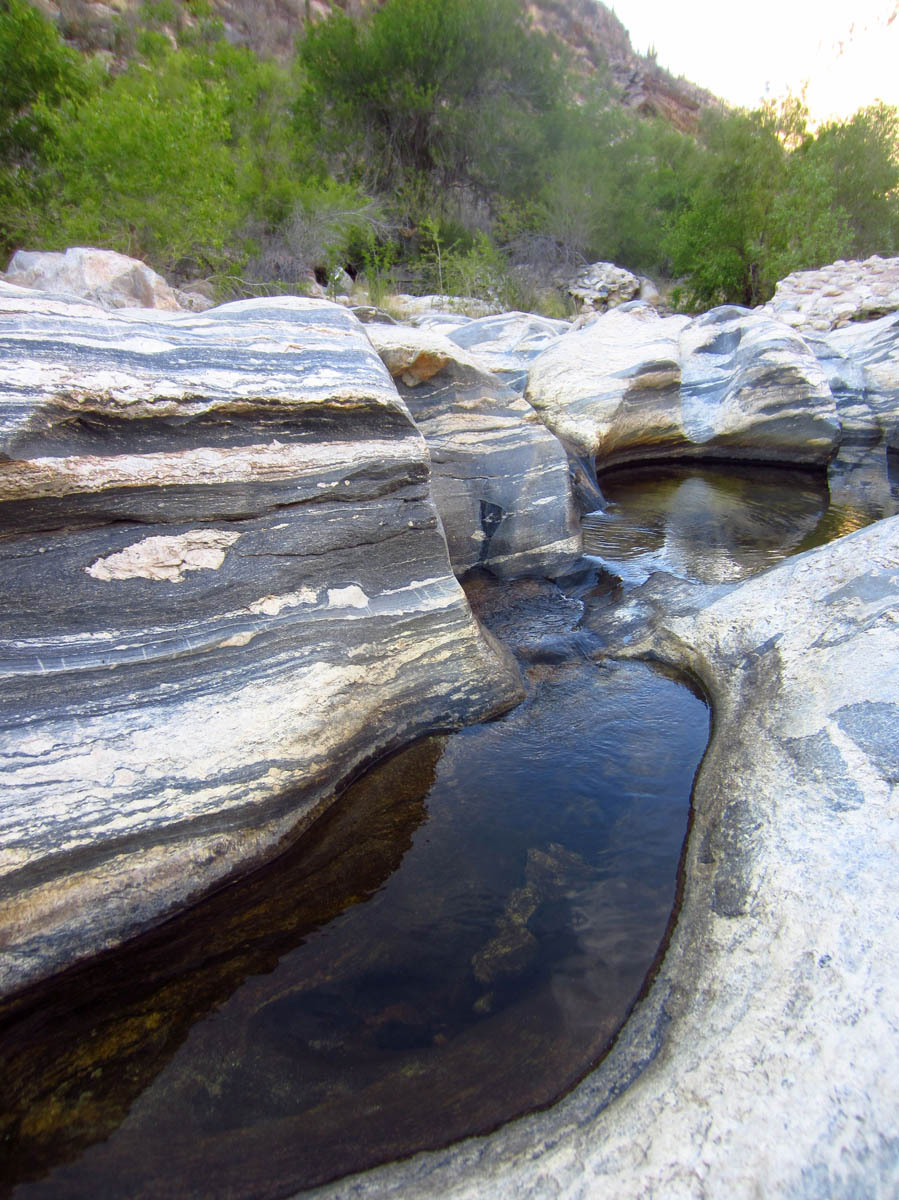 We talked further about the Native American traditions, and I shared what I learned when I visited the Chamula indigenous village in Mexico; “The modern man thinks the land belongs to him, but really, he belongs to the land.”  To this, they proclaimed me “the coolest Texan we ever met!”    As I started to leave, I gave them the only food I had on me…a CLIF Peanut Butter Crunch granola bar.   The man said, “I hope you don’t think we were asking for a hand-out.”  I replied, “No, that’s why I gave it to you.”

As I made my way further down the canyon road, I couldn’t stop thinking about their life in the canyon, and how they really had everything they needed, right here.   Shade under the giant Cottonwood trees.  A stream for bathing.   Rock cliffs and overhangs for protection.   Each other to keep warm.  Food from the edible plants.  And drinking water and a place to poop in the public restrooms.  😉    I found myself saying out loud, “I’d like to live here too.”

But then I came to my senses and chalked it up to being hypnotized by the “A to Z.” 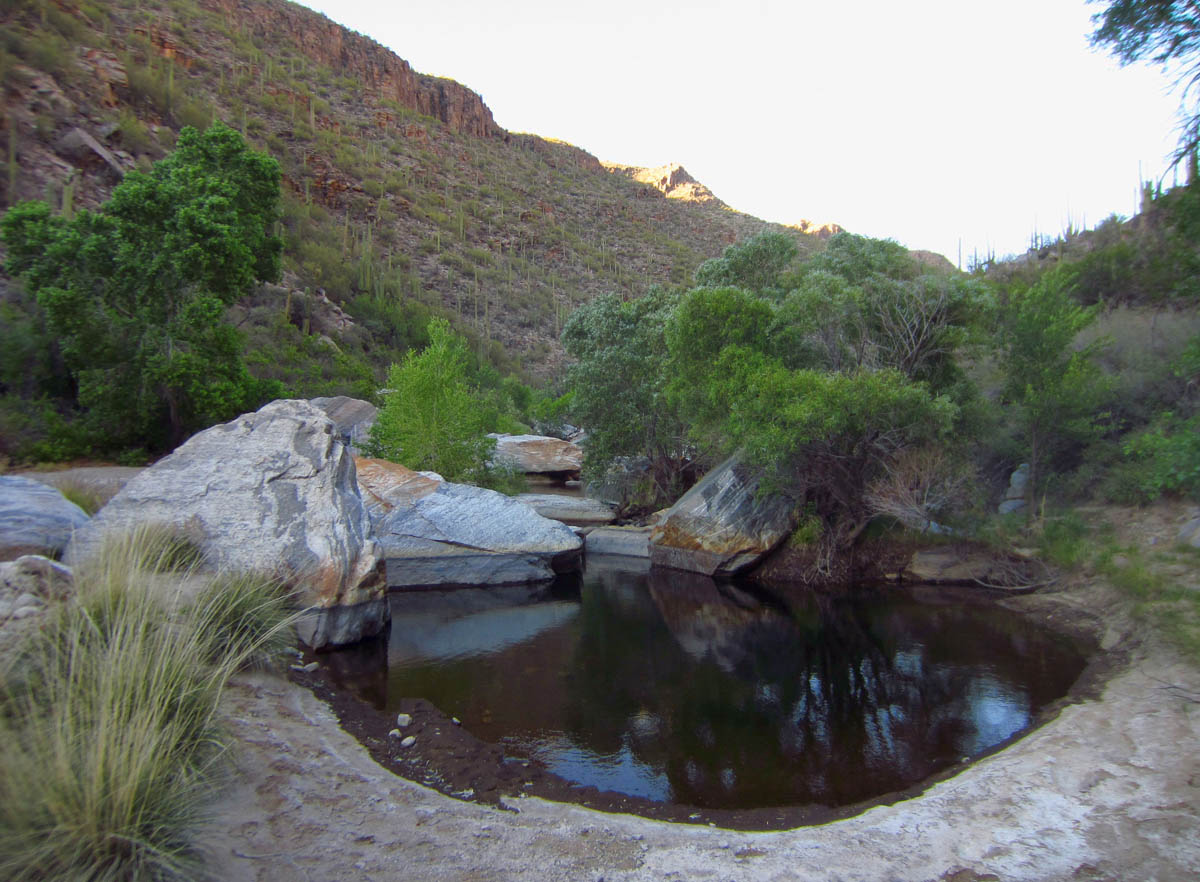 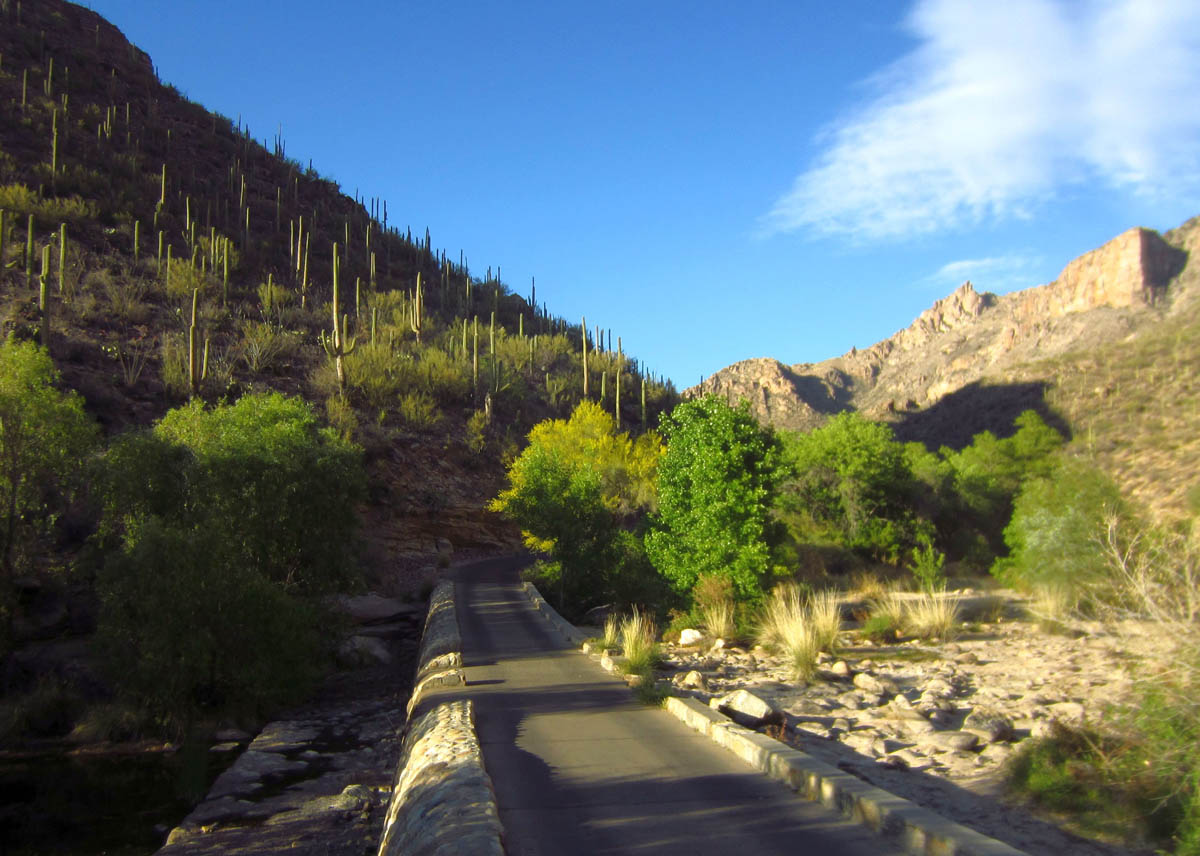 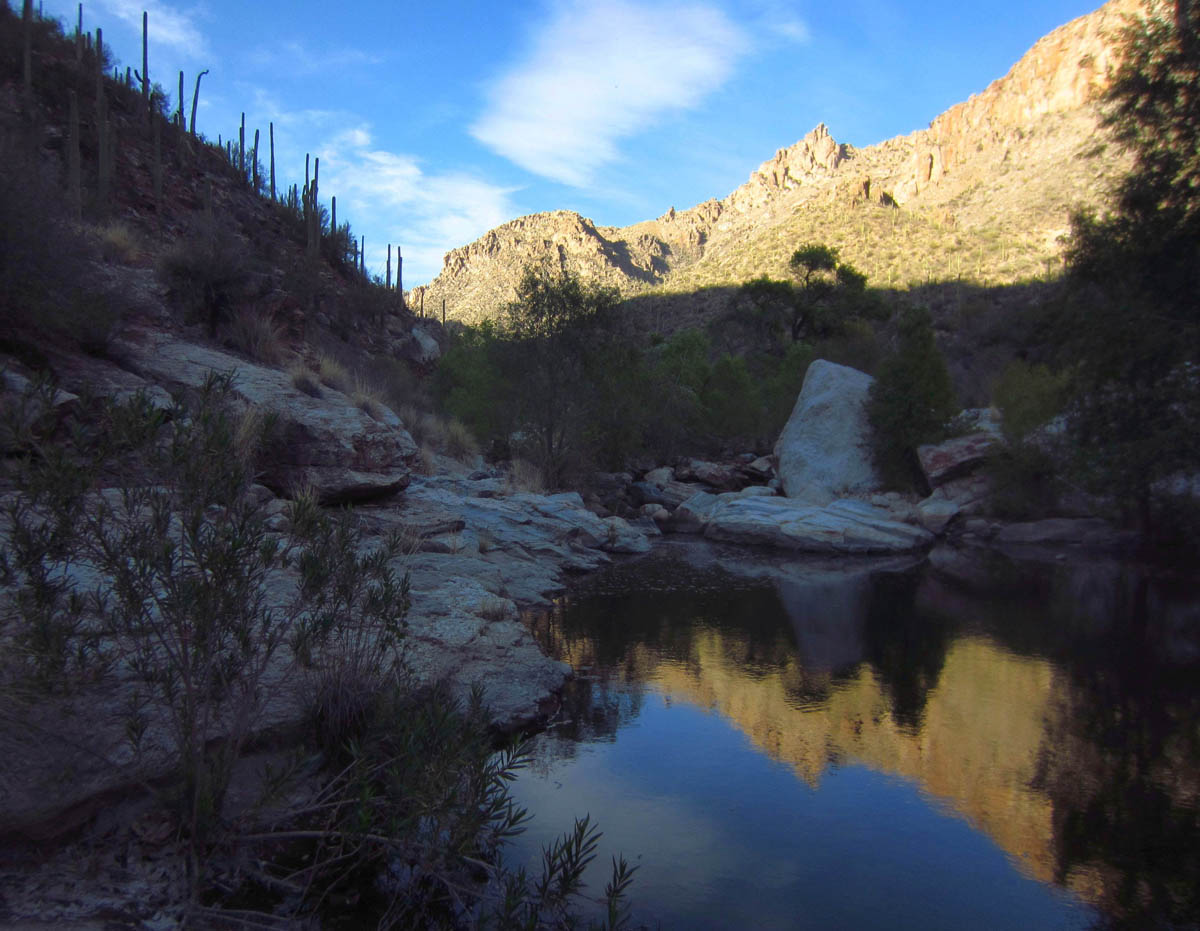 14 thoughts on “The A to Z of Canyon Living”