“When nature has work to be done, she creates a genius to do it.”  ~Ralph Waldo Emerson

I have been a fan of Frank Lloyd Wright’s organic architectural design since my college days, when I took an “Introduction to Architecture” elective which turned out to be my favorite class.   As one of the greatest architects of our time, what’s not to love?   But his work has always resonated with me more than other architects, even Alder and Sullivan, Wright’s mentors, or other Modernist greats like Mies van der Rohe or Le Corbusier.   It was not until recently, after I began to appreciate nature more through reading Emerson and developed a greater appreciation for the perfection of nature that I realized it was Frank Lloyd Wright’s passion for nature that attracted me to his work.   He once said “I believe in God, only I spell it Nature.”   He believed that nature itself was architecture. 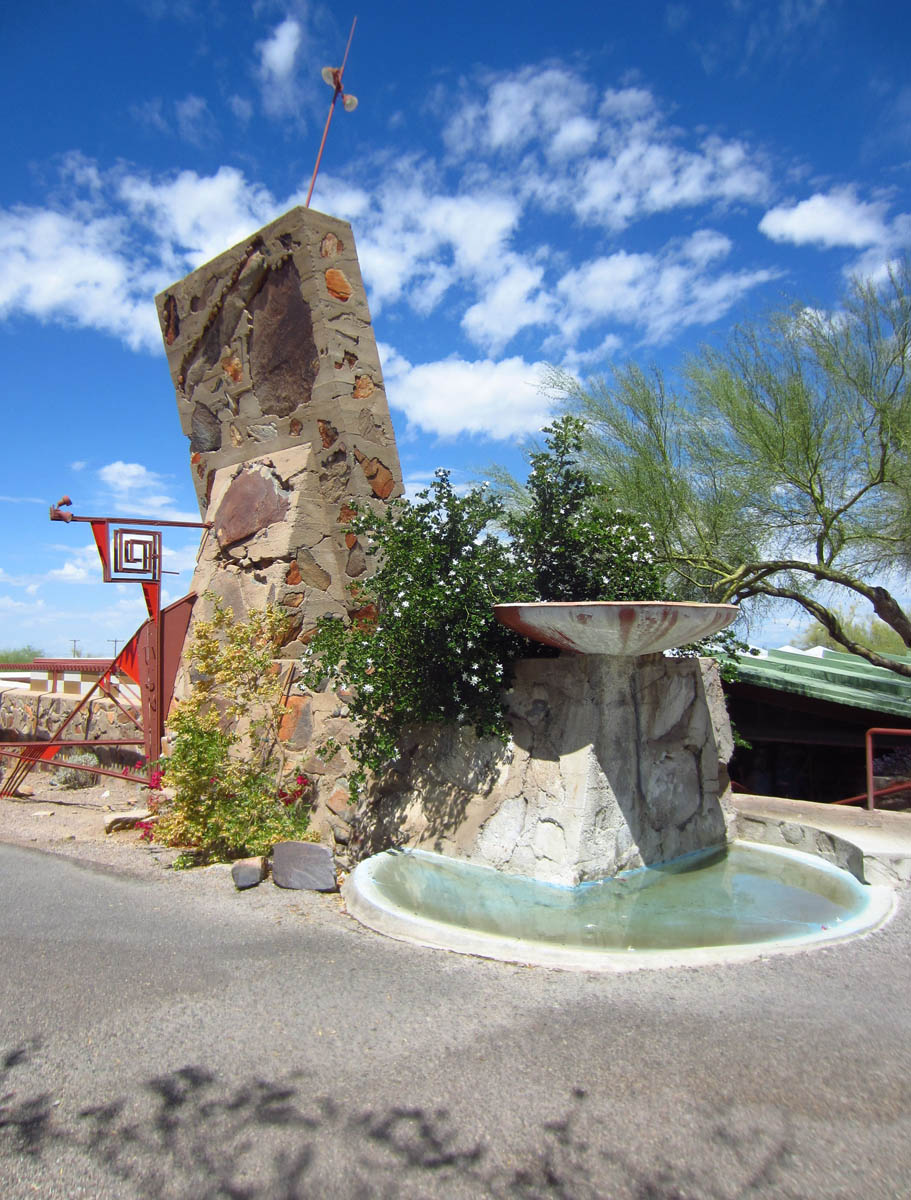 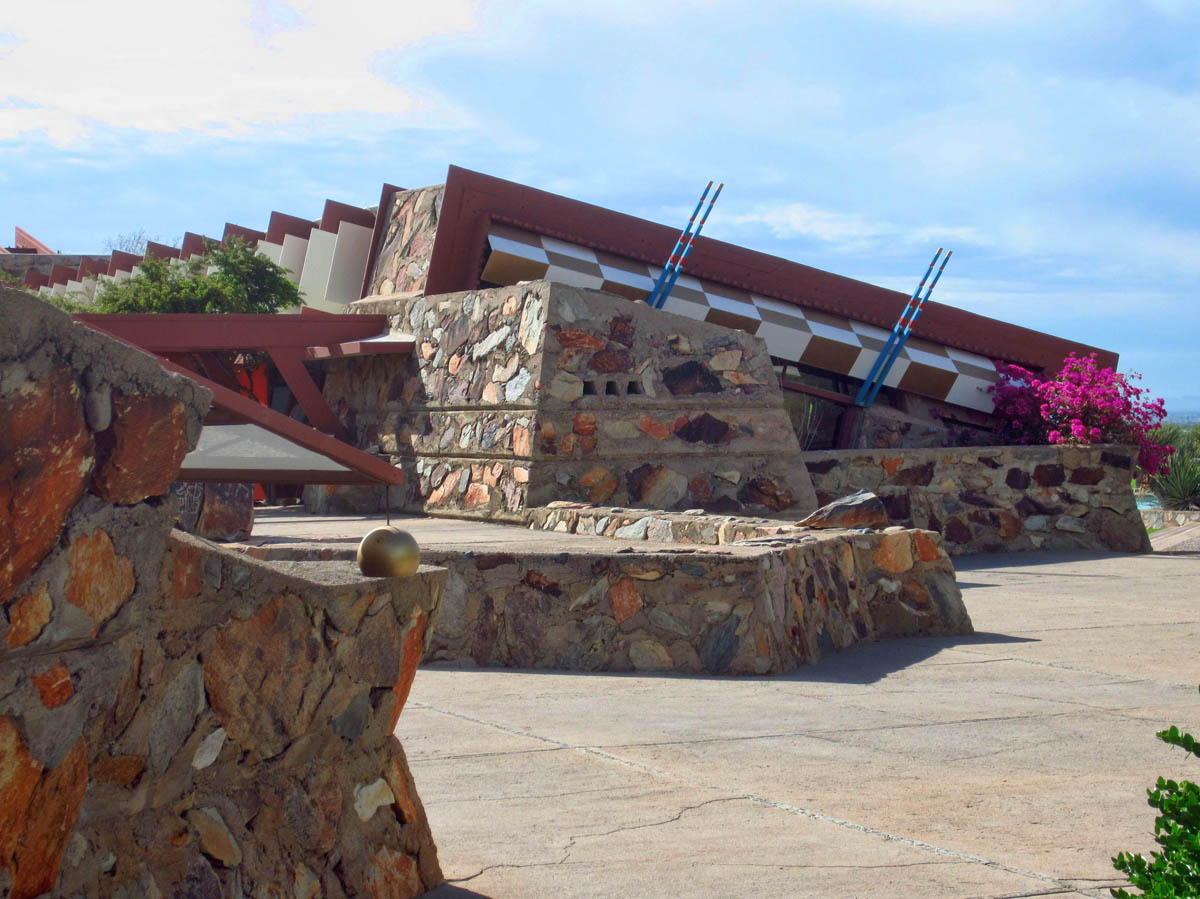 In true Wright fashion, you have to look around to find the front door.

As much as he thrived in an urban setting, embracing the urban lifestyle, he also loved the desert so much that he built a camp in the McDowell Mountains and lived in nothing but a canvas tent.  He later incorporated the elements of this tent camp into Taliesin West, including the sunburned desert stones embedded in sand and concrete and translucent white canvas as a roof to diffuse the bright desert sunlight. 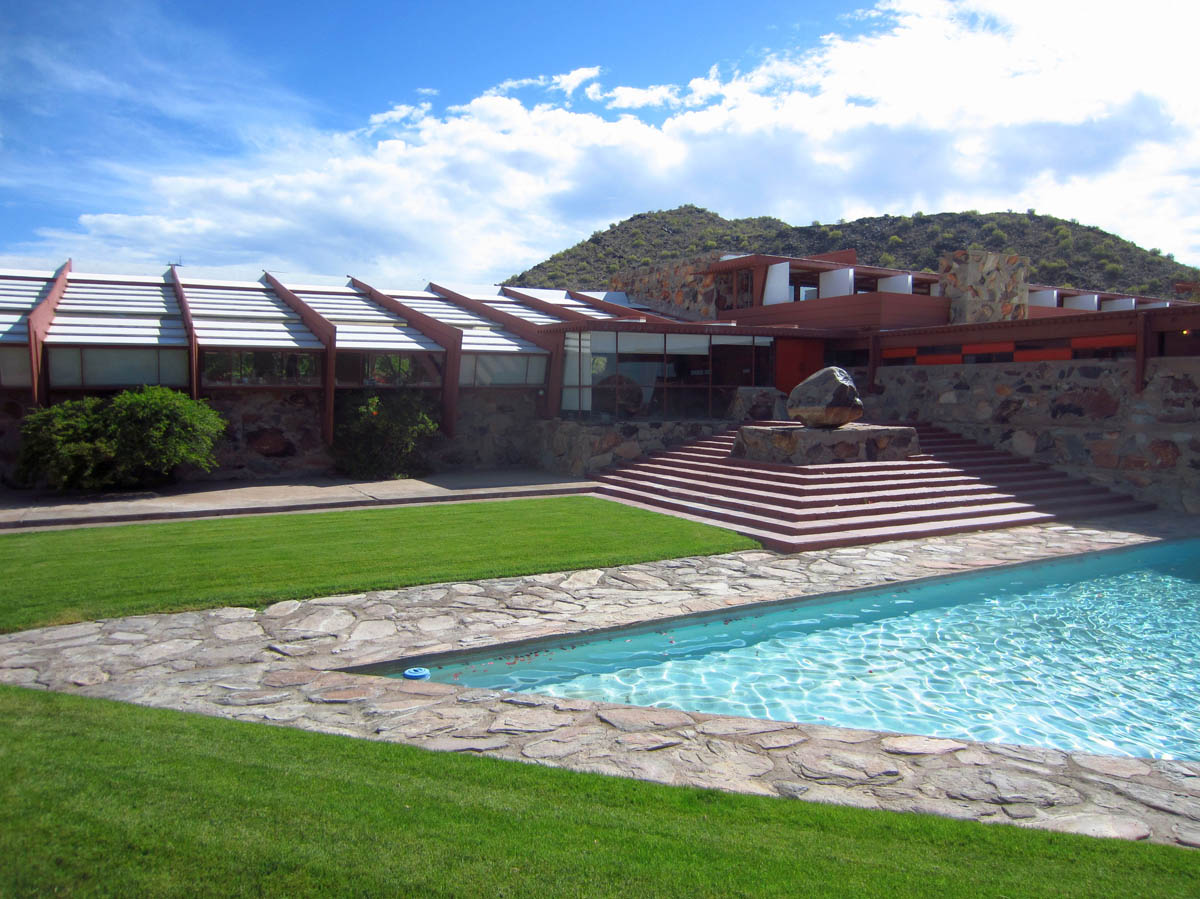 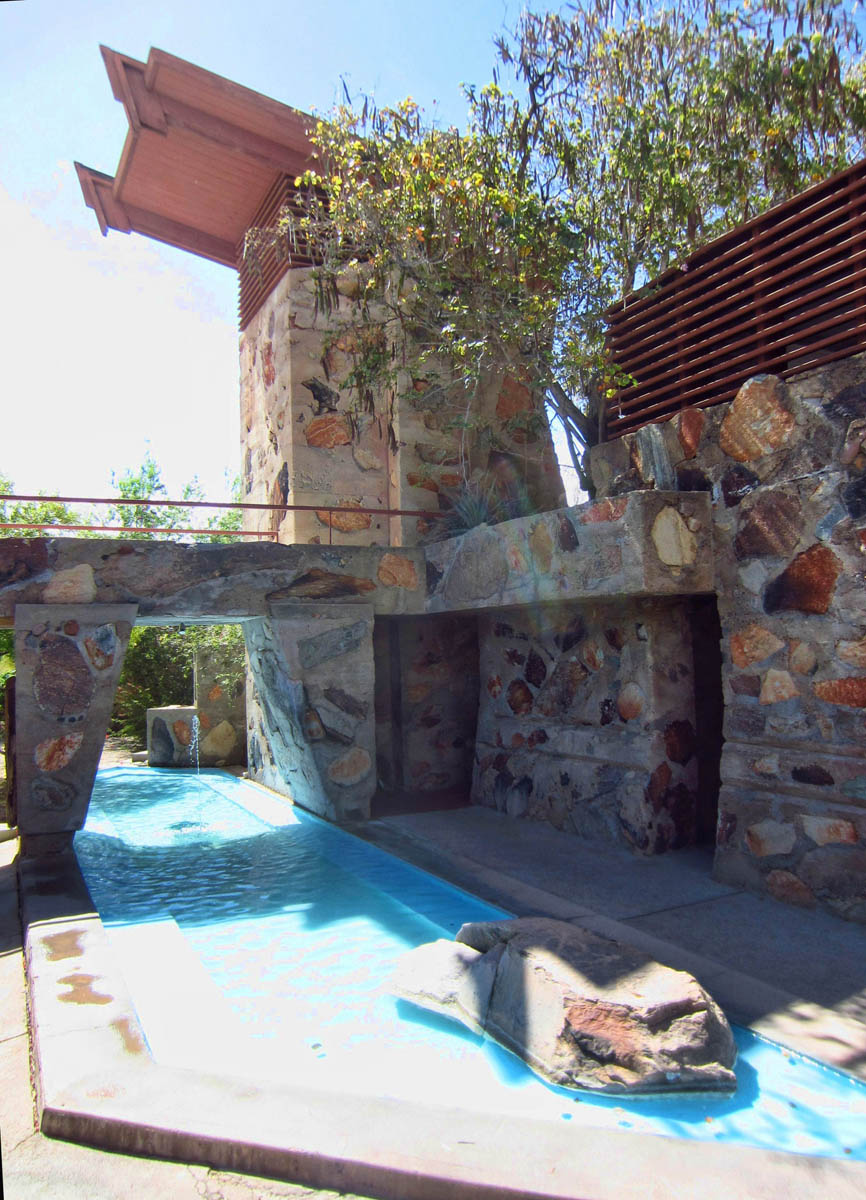 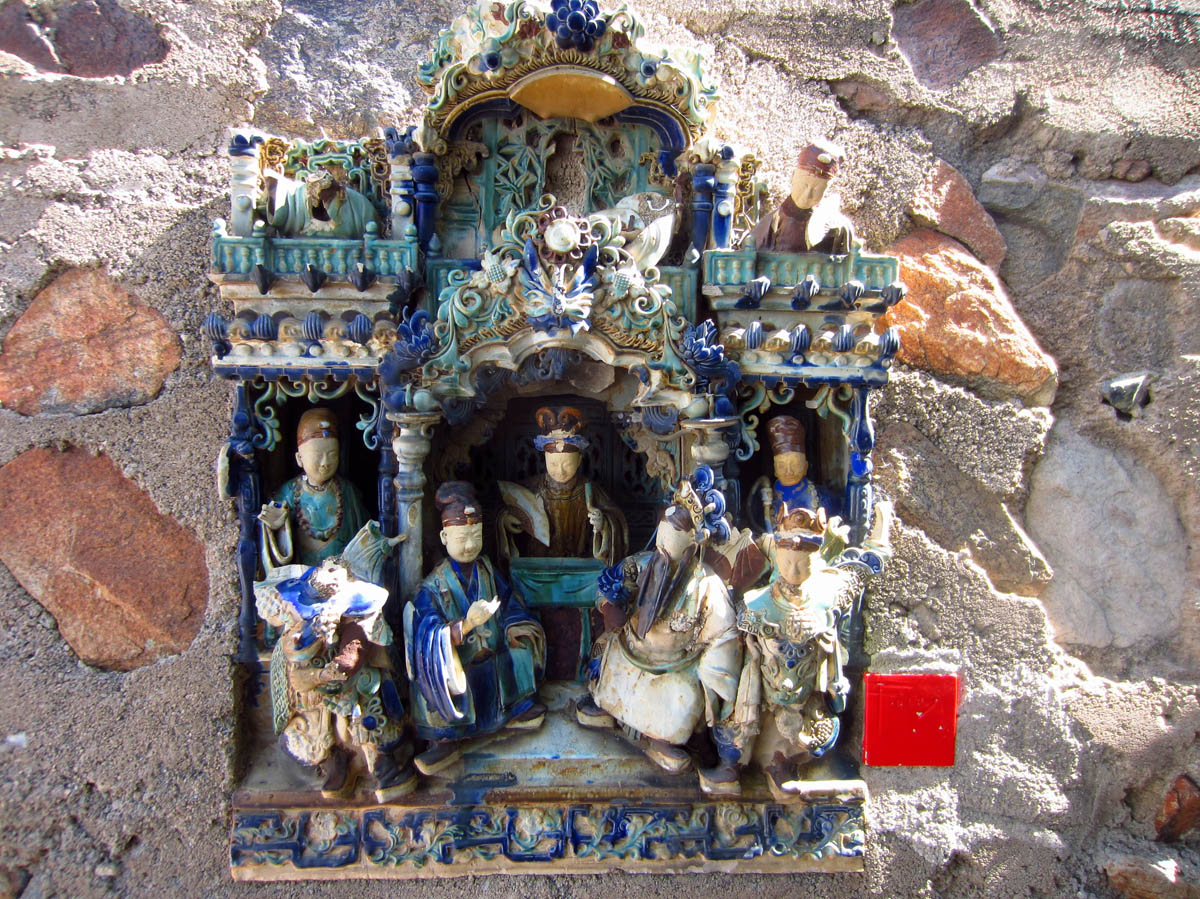 Wright had a passion for Oriental art, so bits of it are incorporated at Taliesin West.

This close natural relationship between the house and landscape is Wright’s hallmark.   “Form follows function was misunderstood.  Form and function should be one, joined in a spiritual union.”  Whether it was a museum in the middle of Manhattan, or a canvas camp in the middle of the Sonoran desert, Frank Lloyd Wright still found his inspiration from nature…truly a man after my own heart. 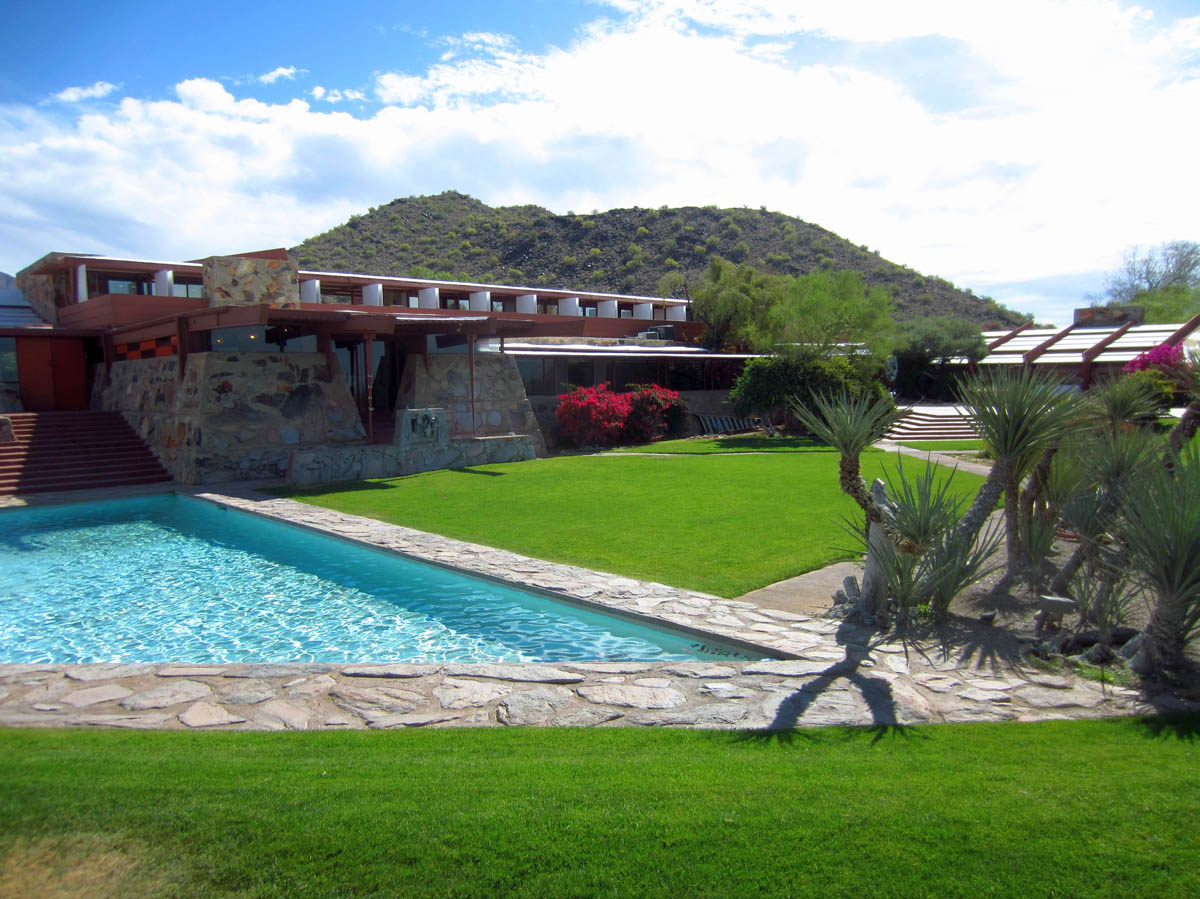 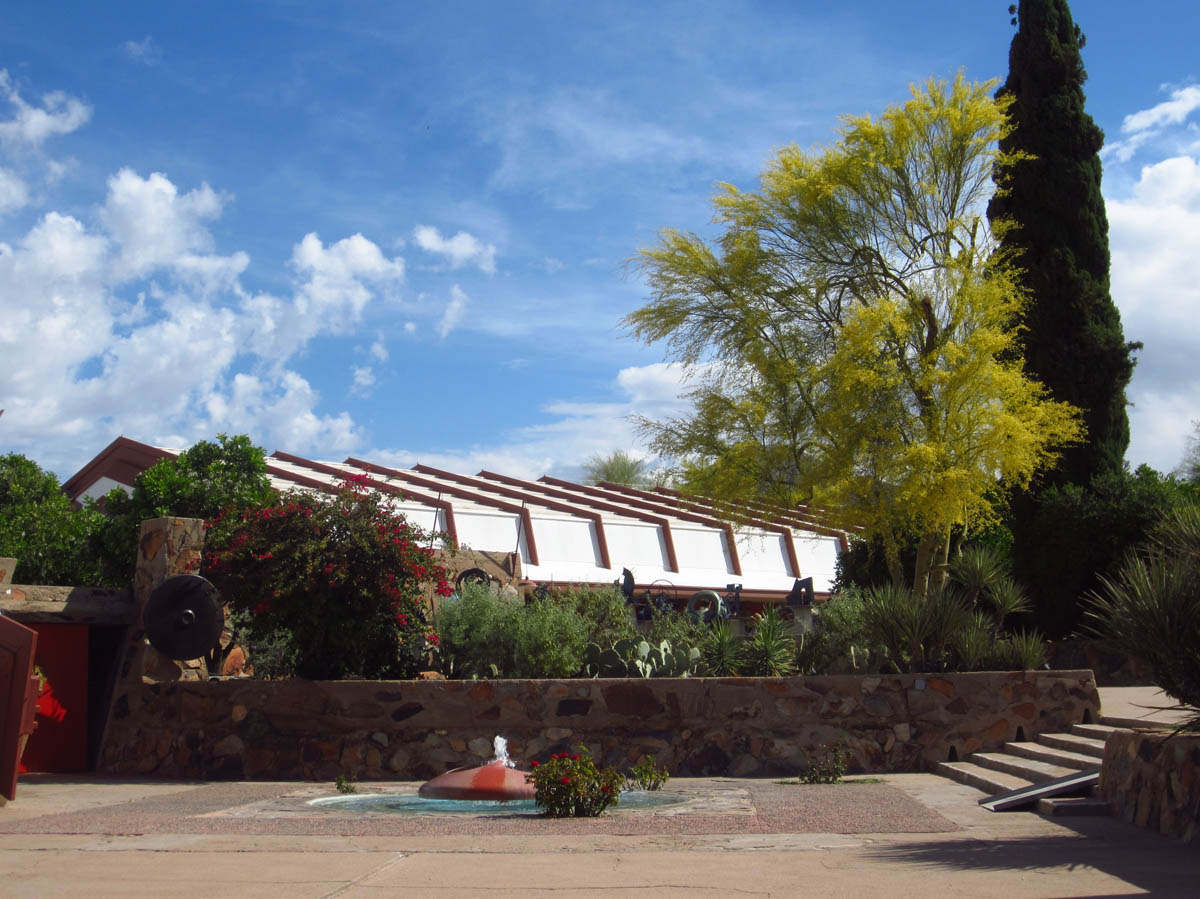 So I couldn’t come to the Sonora desert without a stop at Taliesin West, Frank Lloyd Wright’s winter home from 1939 until his death in 1959.   I signed up for two tours, the “Night Lights” tour which only takes place on Friday nights, and the “Insights” tour first thing the next morning.   One thing I learned from my Fallingwater visit – always sign up for the very first tour of the day, or your photos will be filled with the tour group in front of you and behind you! 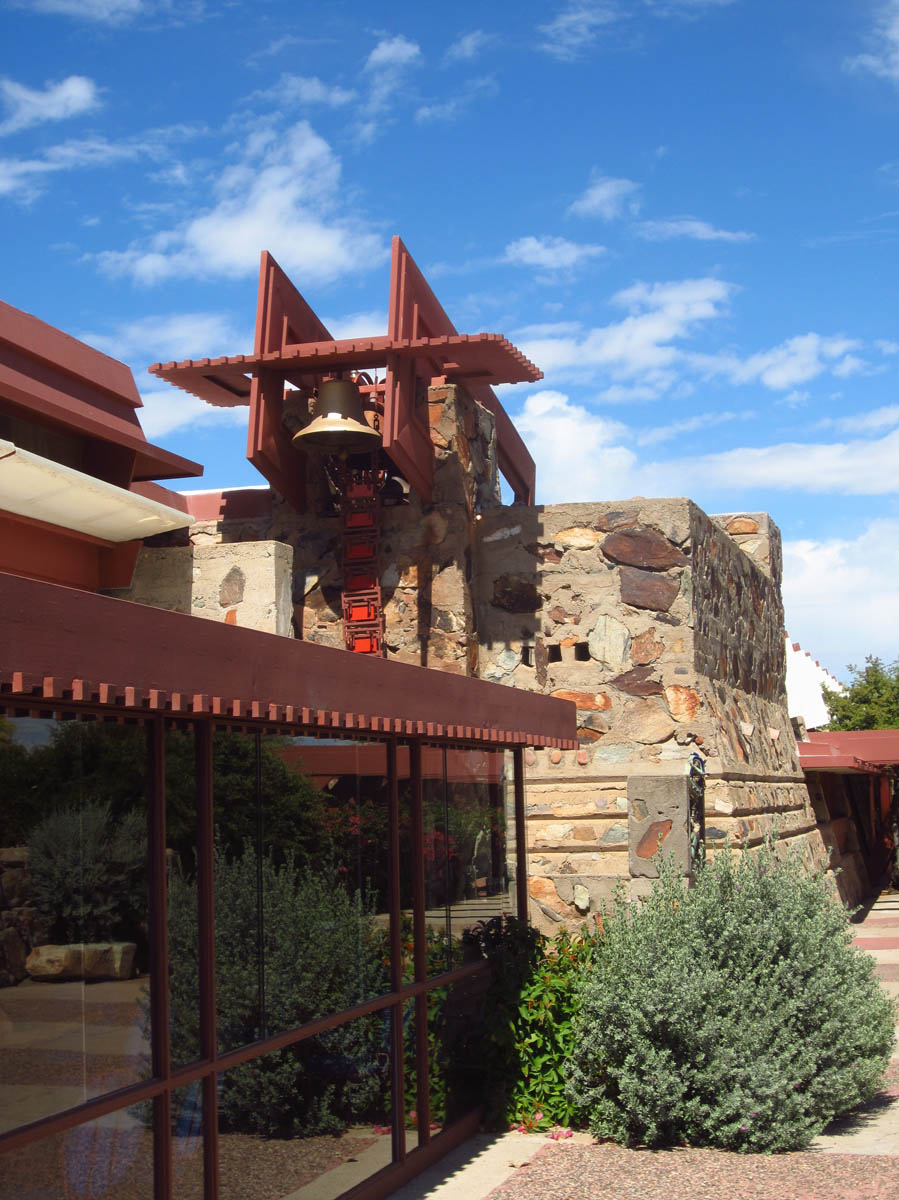 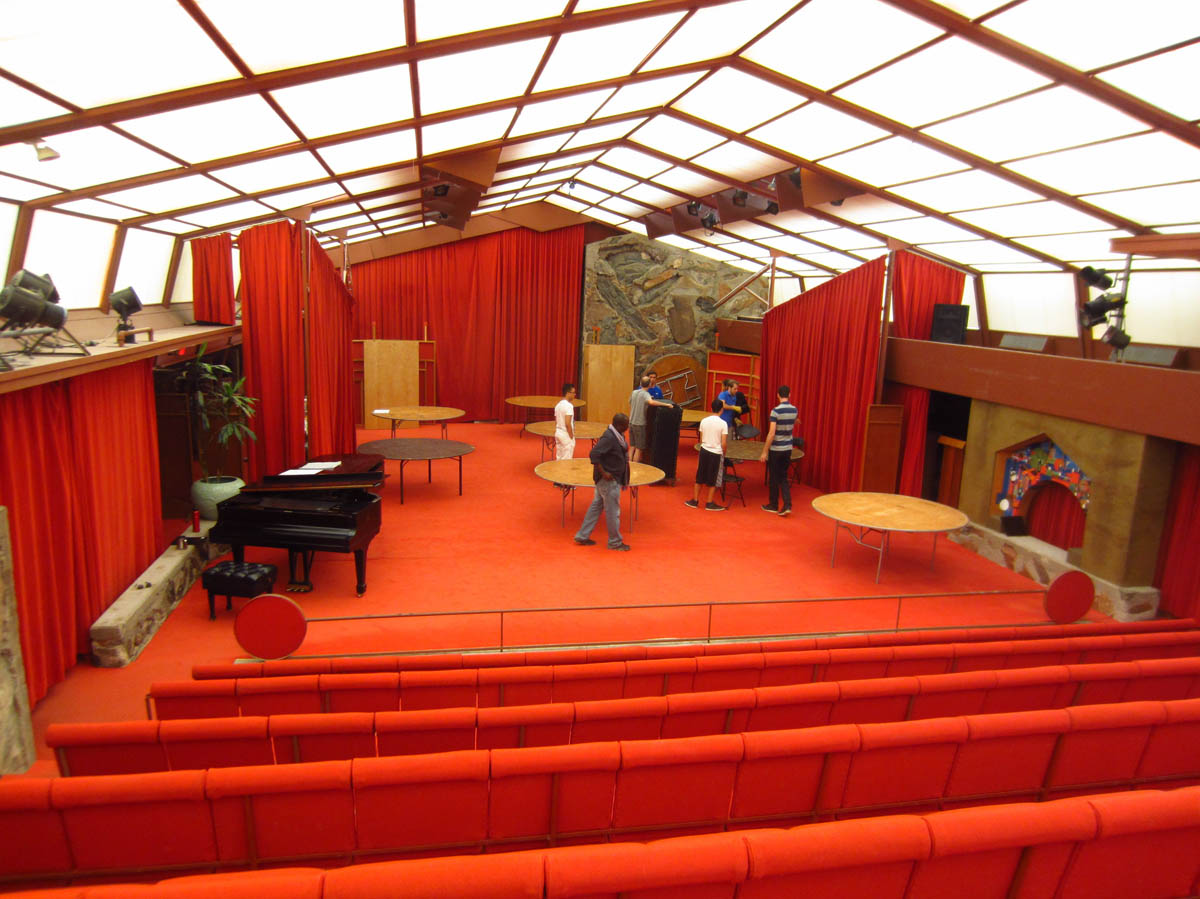 But “to be frank, Frank,” of all the Wright buildings I have visited so far (only 6) this one was my least favorite.  I think that is because it was a “campus,” and therefore a hodgepodge of different enclosures, from Wright’s own spartan, tiny bedroom to the massive Music Pavilion, Cabaret Theatre, and dining hall, it lacked the intimate feel, continuity, and personal details I have come to appreciate in his design of private family homes. 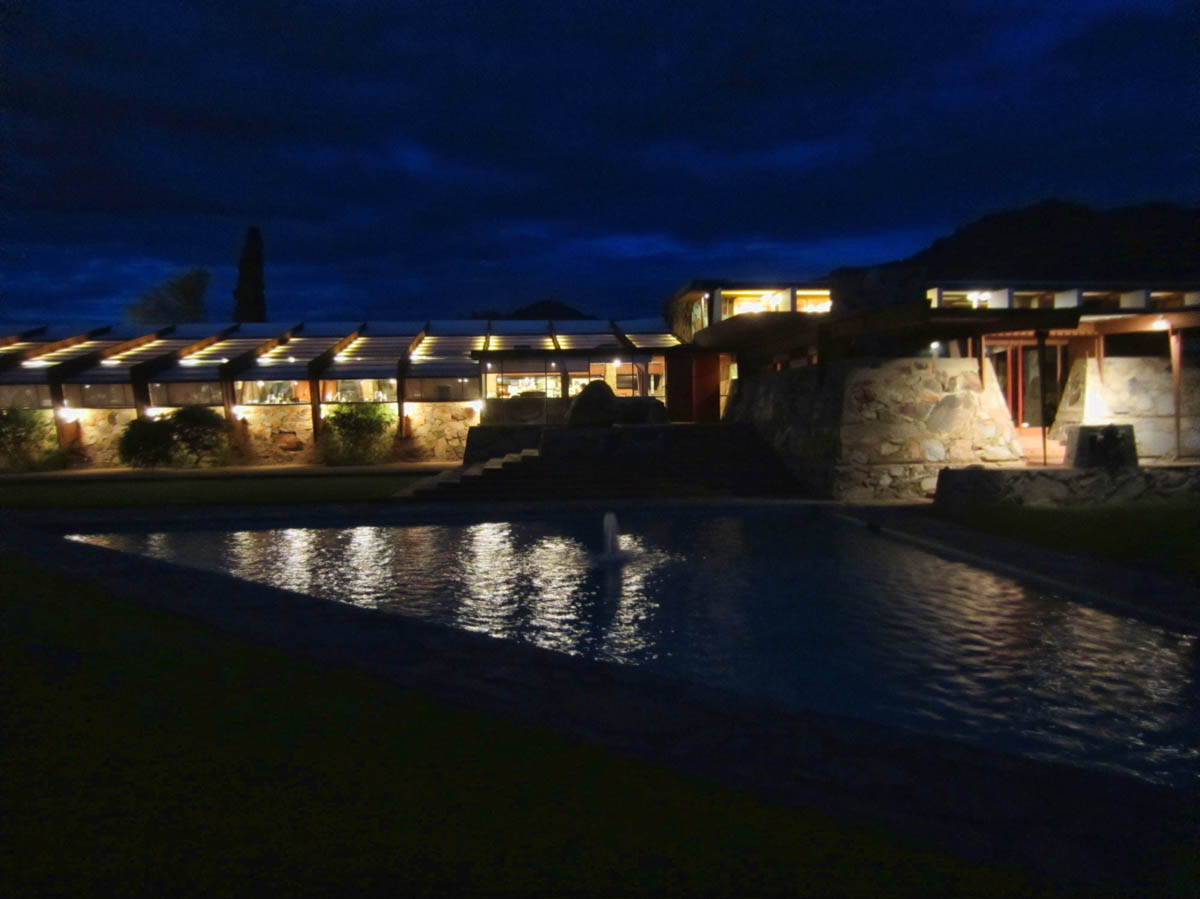 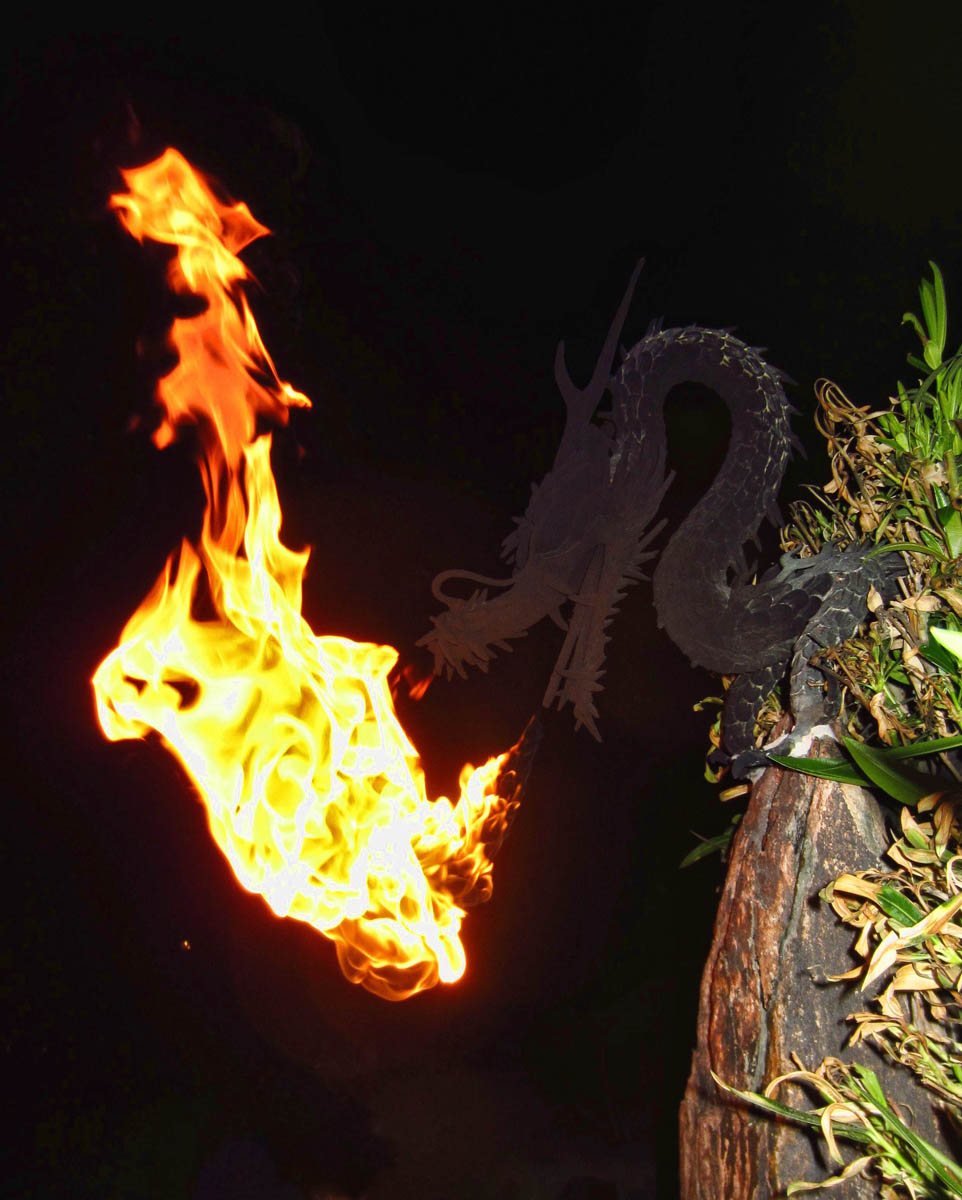 “Dragon in the Desert” outdoor lamp. 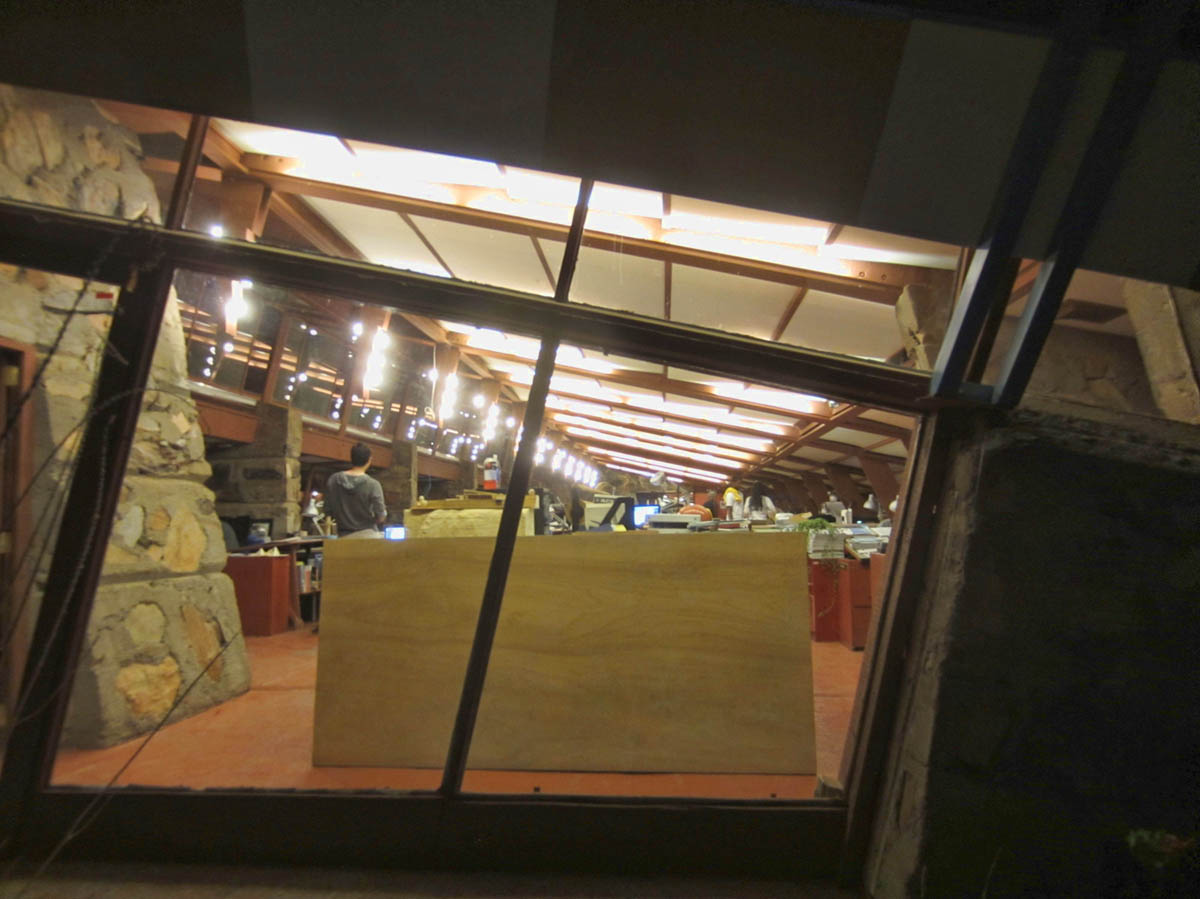 Since Taliesin is at the foot of the McDowell Mountains, the beautiful McDowell Mountain Regional Park was the perfect location to park the Winnie, just a half hour drive through Fountain Hills to the edge of Scottsdale.   The RV spaces were perfectly groomed – When’s the last time you had an RV site that had been raked?   The park was spacious, well kept, and offered miles of hike and bike trails.   The temperatures were on the rise, so I only stayed a weekend, but this little gem of an RV Park is definitely worthy of a repeat visit.  (Thanks to the WatsonsWander blog for this great recommendation!) 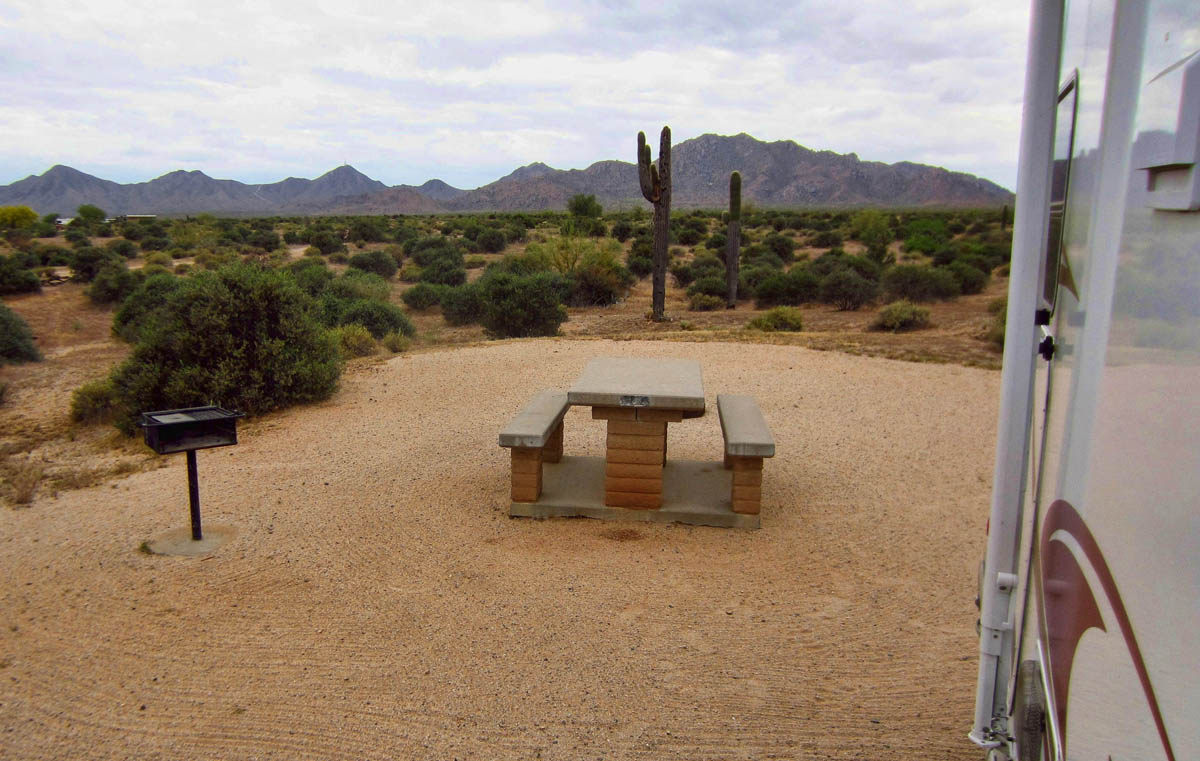 While I was in Phoenix, I also visited another of Frank Lloyd Wright’s works, the Biltmore Hotel, where he served as consulting architect.   Although they have reportedly tried to keep many of the public spaces true to Wright’s design, there is surprisingly little about the architect on display.   I found a small plaque next to the stained glass mural that Wright designed, as well as a “History Board” that was focused more on the famous people who had stayed there than the famous person who designed it. 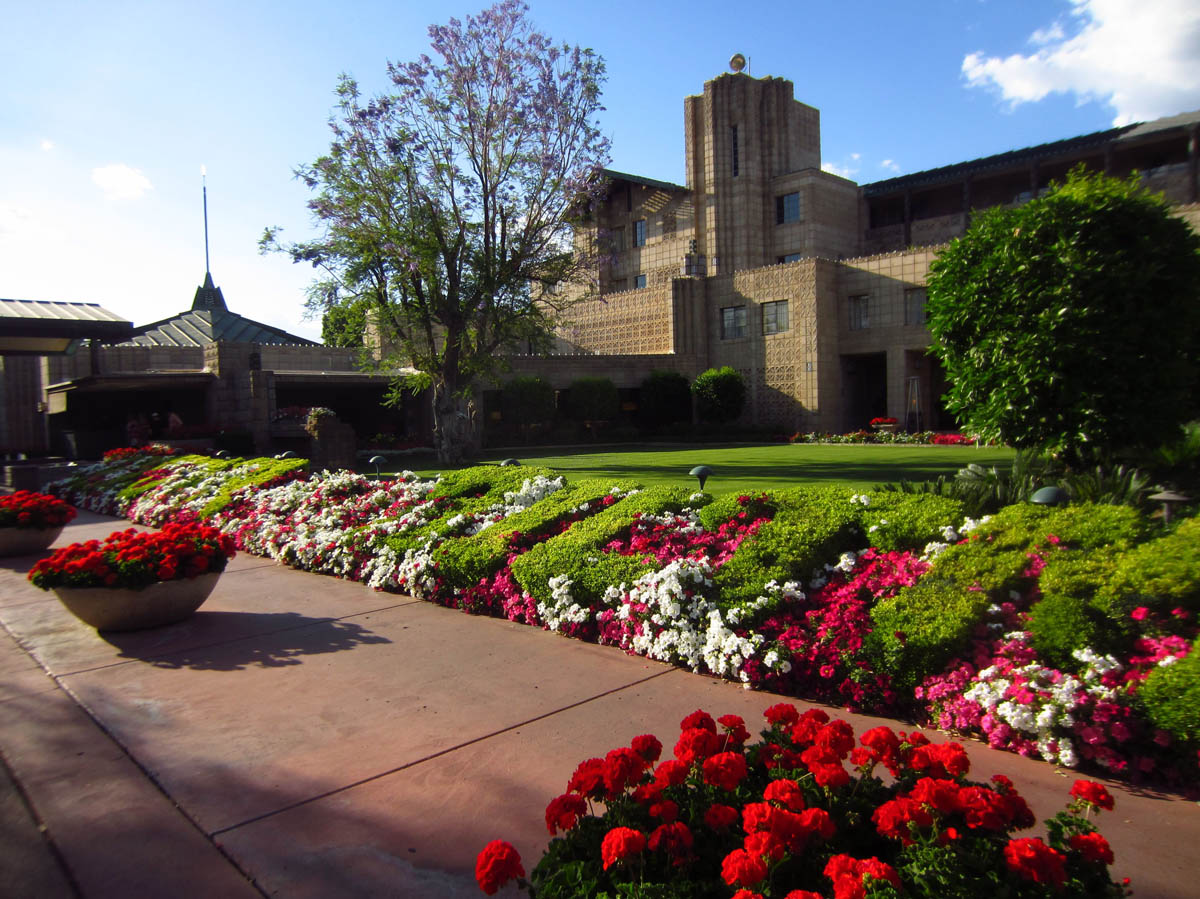 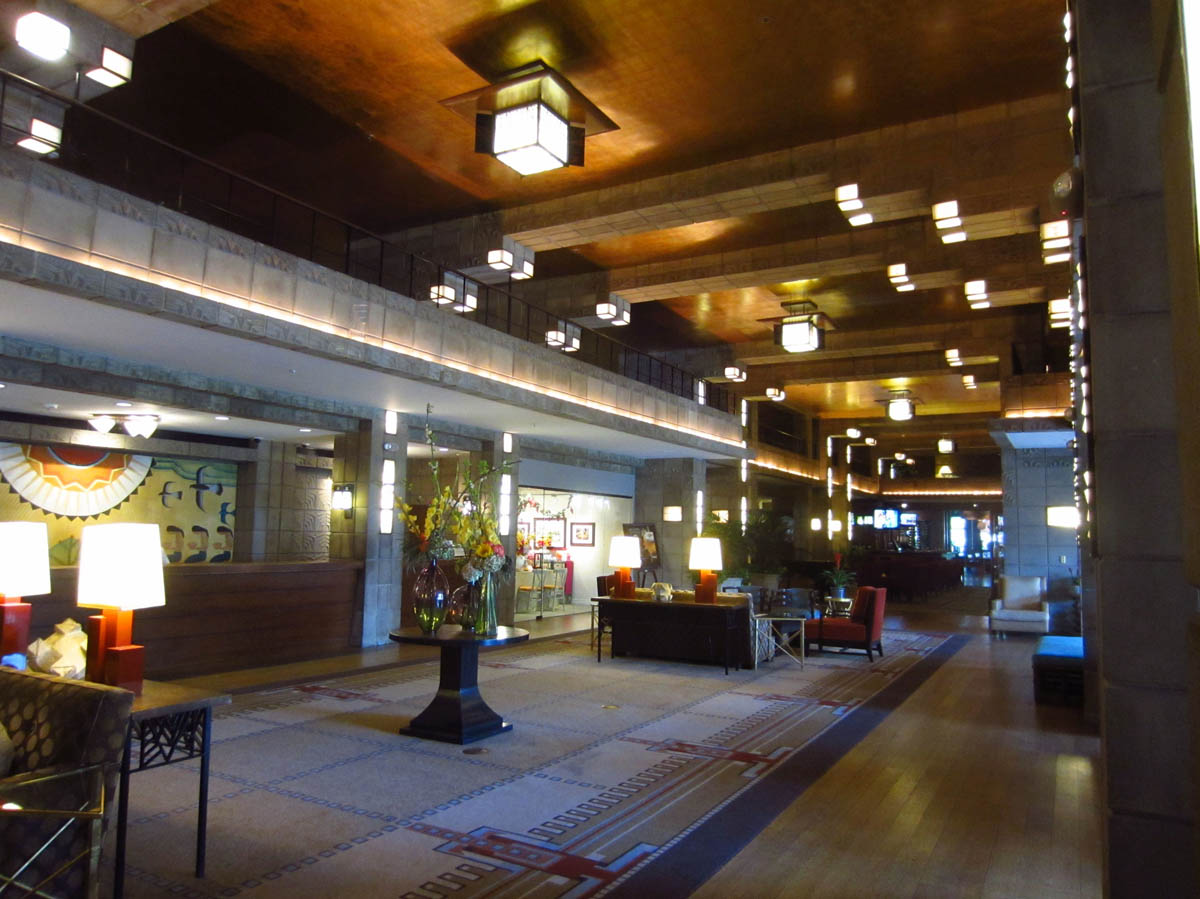 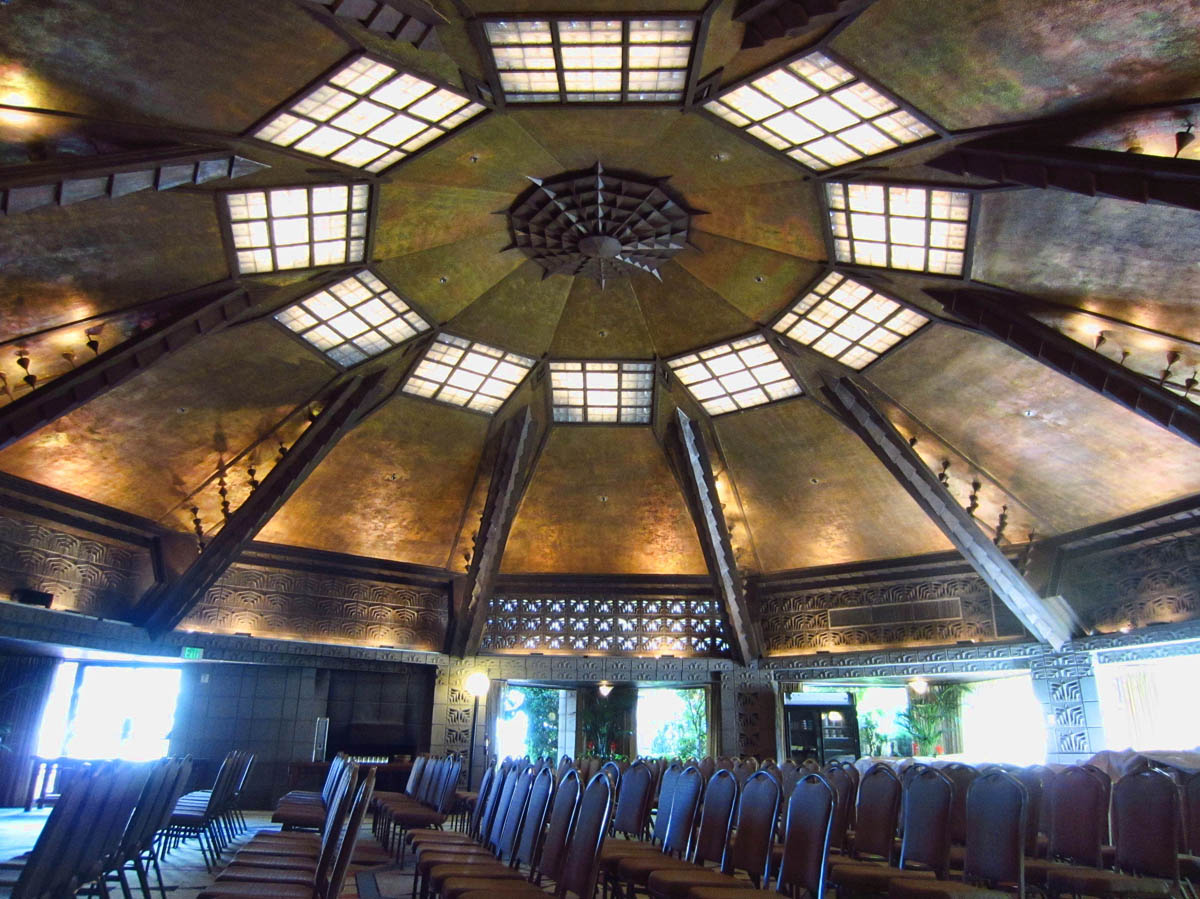 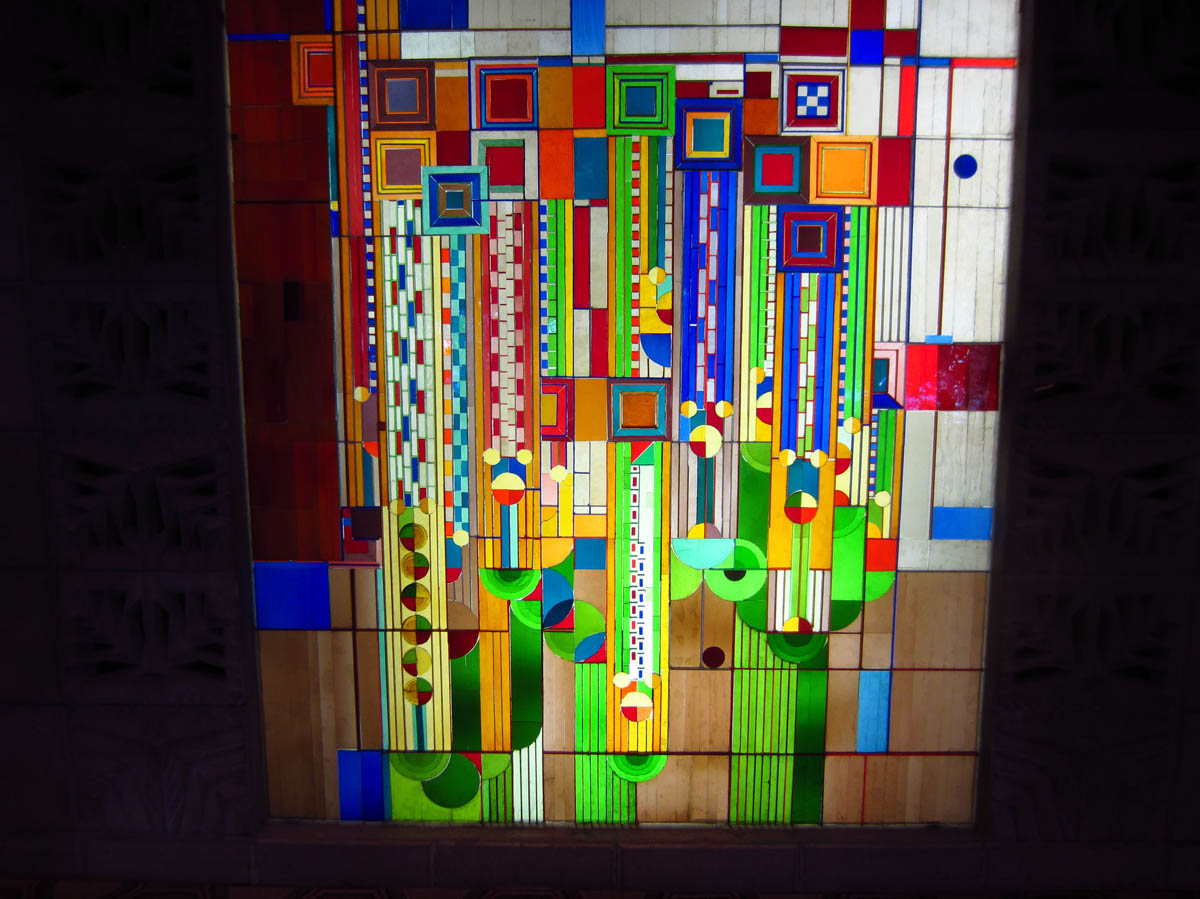 Being in Phoenix always takes me back to the corporate scene back in the 80’s, when my employer, who has a large presence in Phoenix would throw lavish sales meetings in hotels like the Biltmore, with unlimited open bar service until all hours of the night, which would typically end up with pantyhose floating in the pool.   These annual meetings always included a trip to “Rawhide” out in the desert where we would drink tequila shots with our senior leaders until we would fall backwards off the hayride.   Then drive back to the hotel and drink some more.  This is such a stark contrast to the same company twenty years later, where I have to get two levels of approval to buy a box of pencils, and the mere mention of tequila feels taboo in the workplace.  I sometimes feel sorry for the new kids that are just starting in the corporate world, because they will likely never know what that “eighties extreme opulence” was like.  Whether it’s parties, pencils, or people, we are now the company that “does more with less…”

“Less is only more where more is no good.”  ~ Frank Lloyd Wright 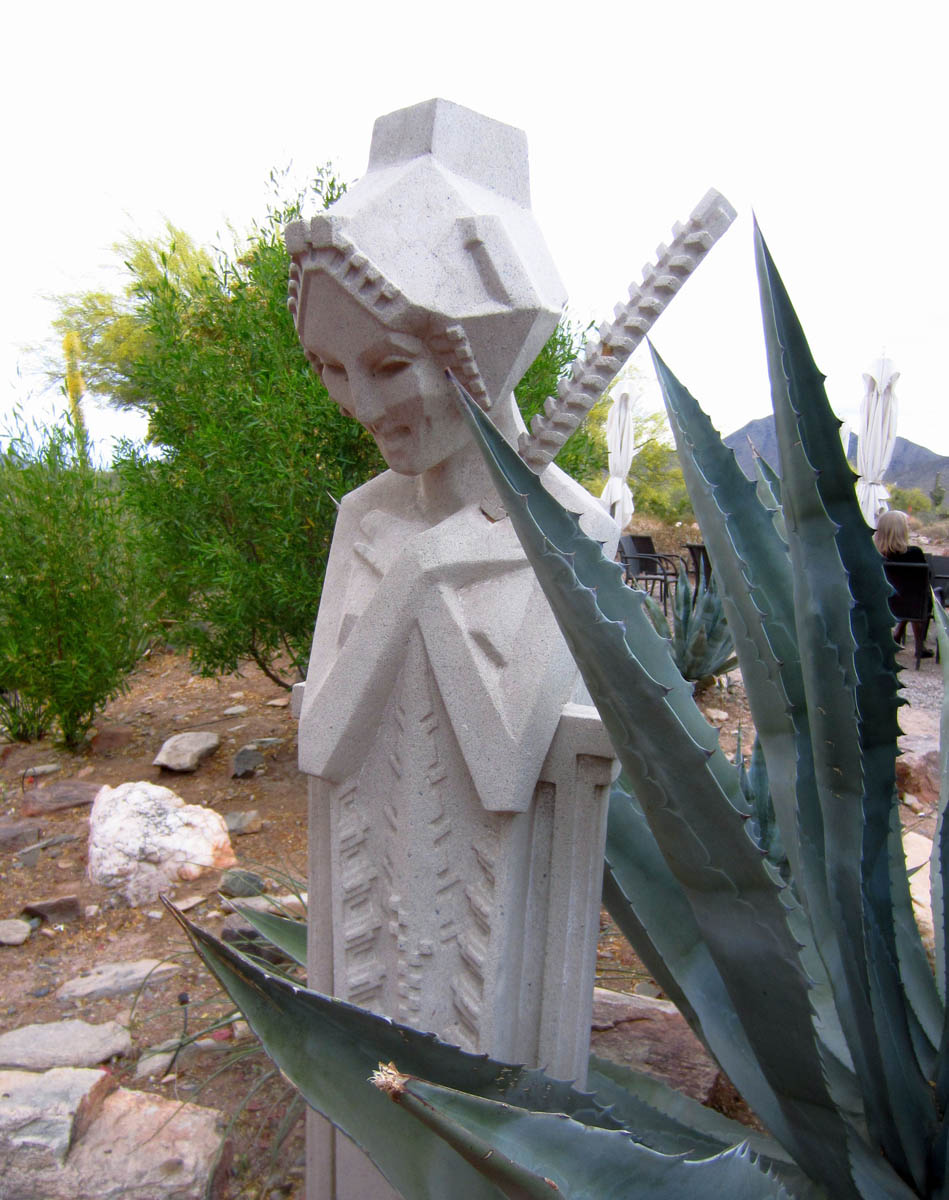