My final weekend along the Oregon Coast now behind me, it is time to once again find a place to anchor for the work week.   The little town of Astoria, “oldest American settlement west of the Rocky Mountains,” looks like the perfect spot to spend the week exploring before pivoting east.  But the only campground I am able to find is the fancy “Lewis and Clark Golf and Premier RV Park.”   There is nothing in that name that sounds anywhere remotely appealing to me.   Besides, after just having signed the invoice for a whole lotta solar, the last thing I want to do is pay $40+ a night for full hook-ups. 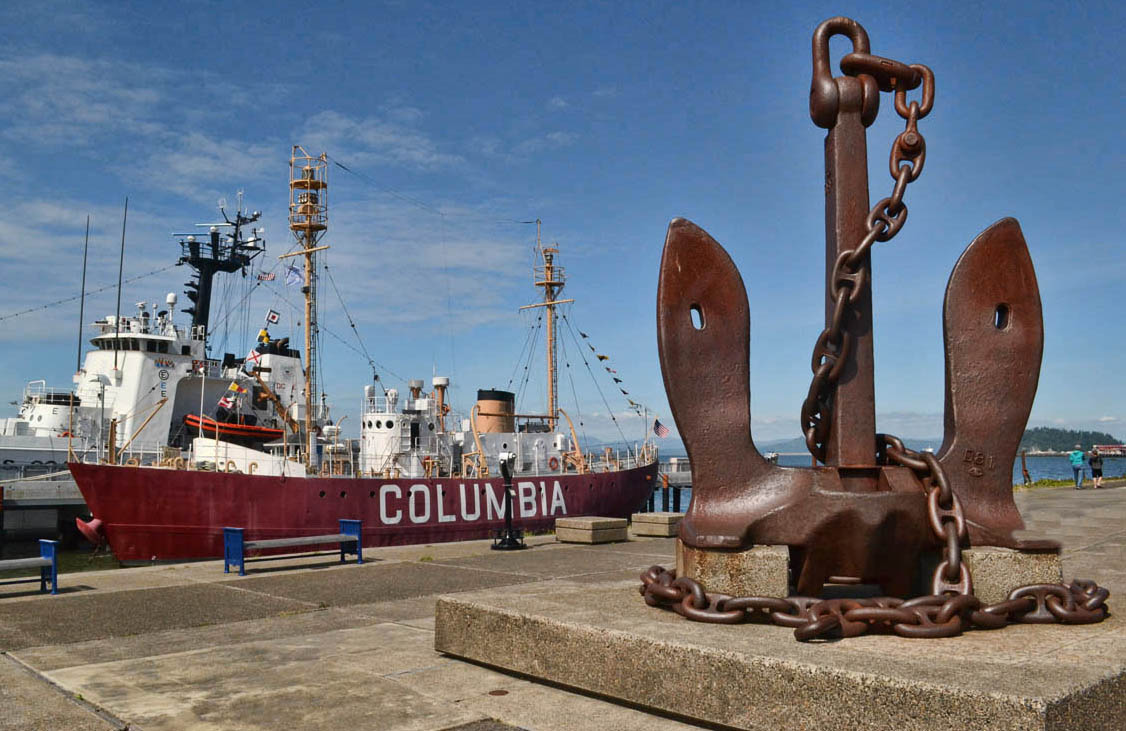 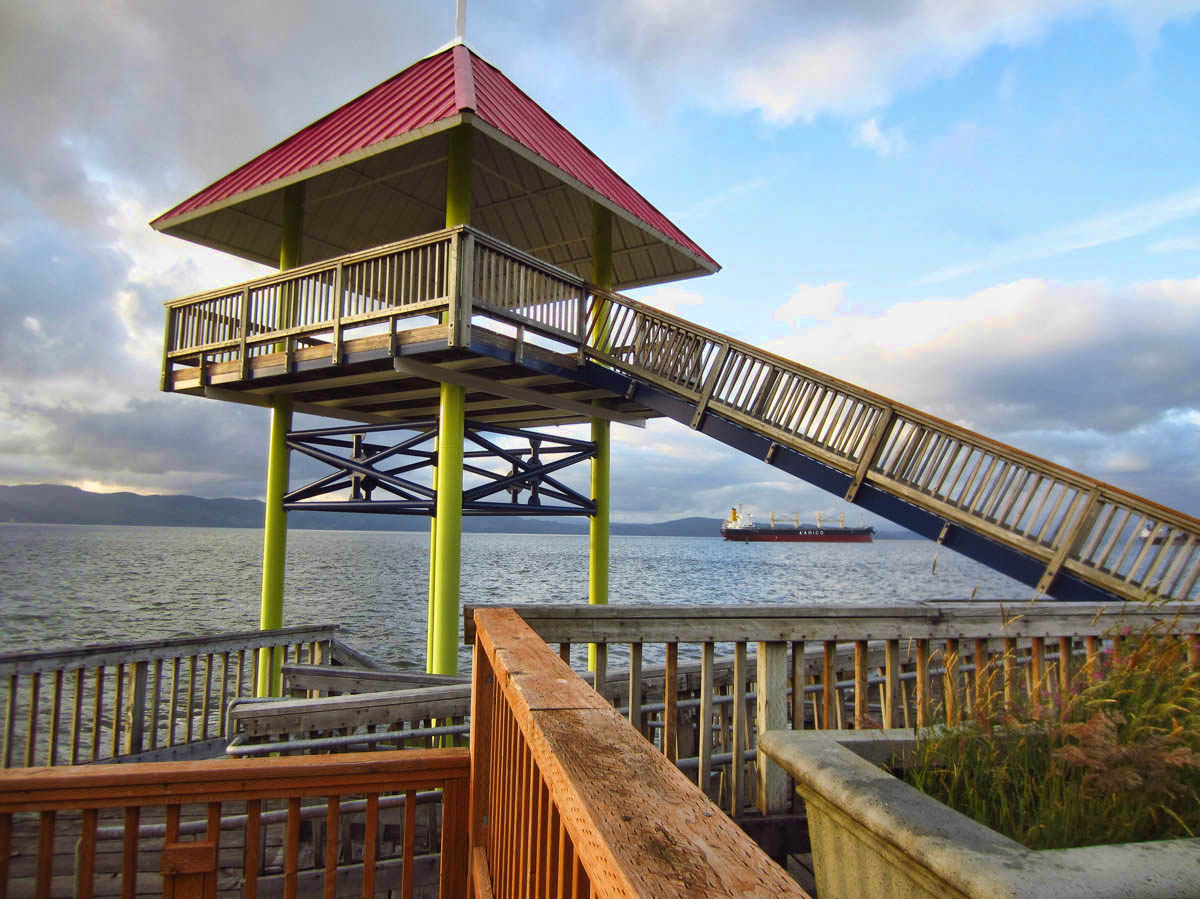 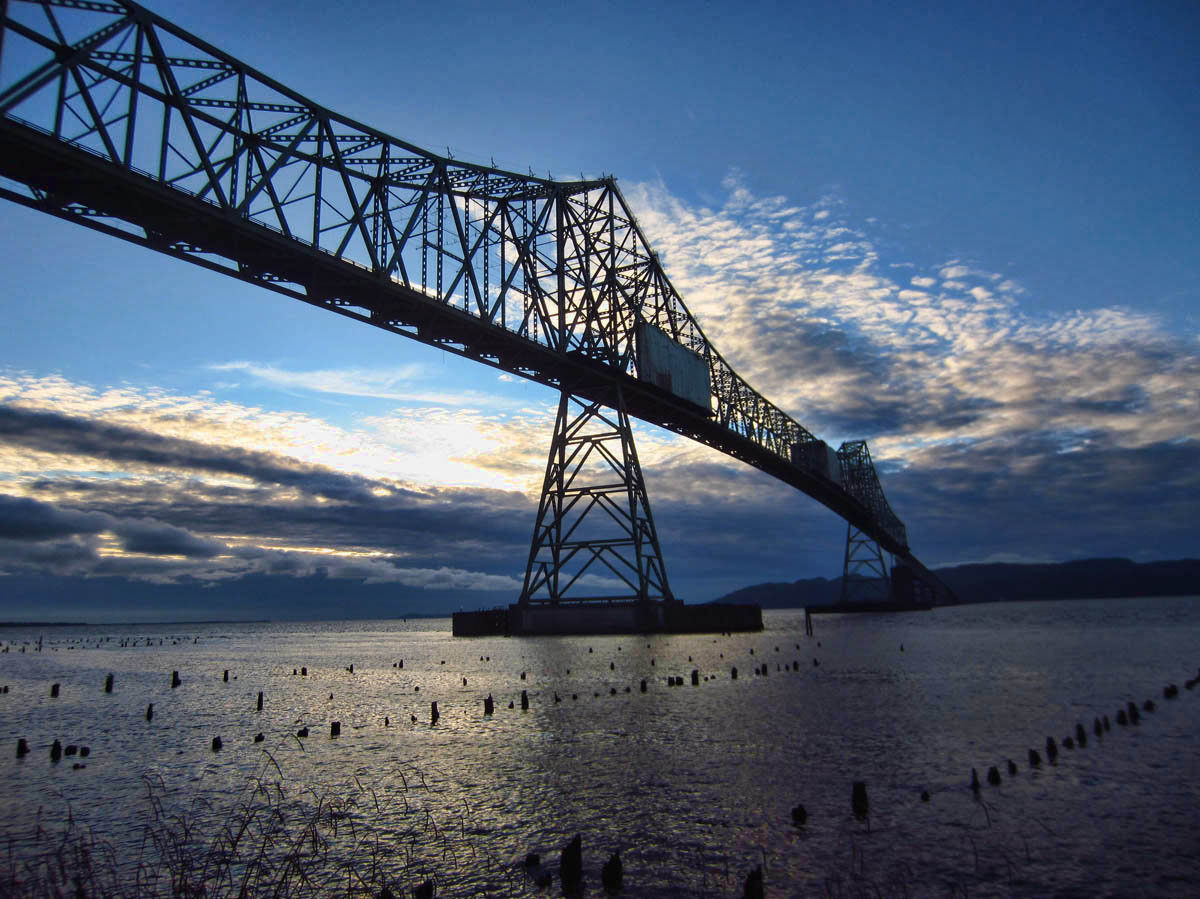 I see there is a county park in nearby Clatskanie, so I set my sights on the 30 mile drive eastward.  But in my typical MO, it is already 7:00pm on a Sunday evening.  As I am driving through the town of Astoria, I see so many interesting places!  I feel remorseful about not being able to stay here, but I figure it’s only 30 miles away, I will drive back one or two nights to explore. 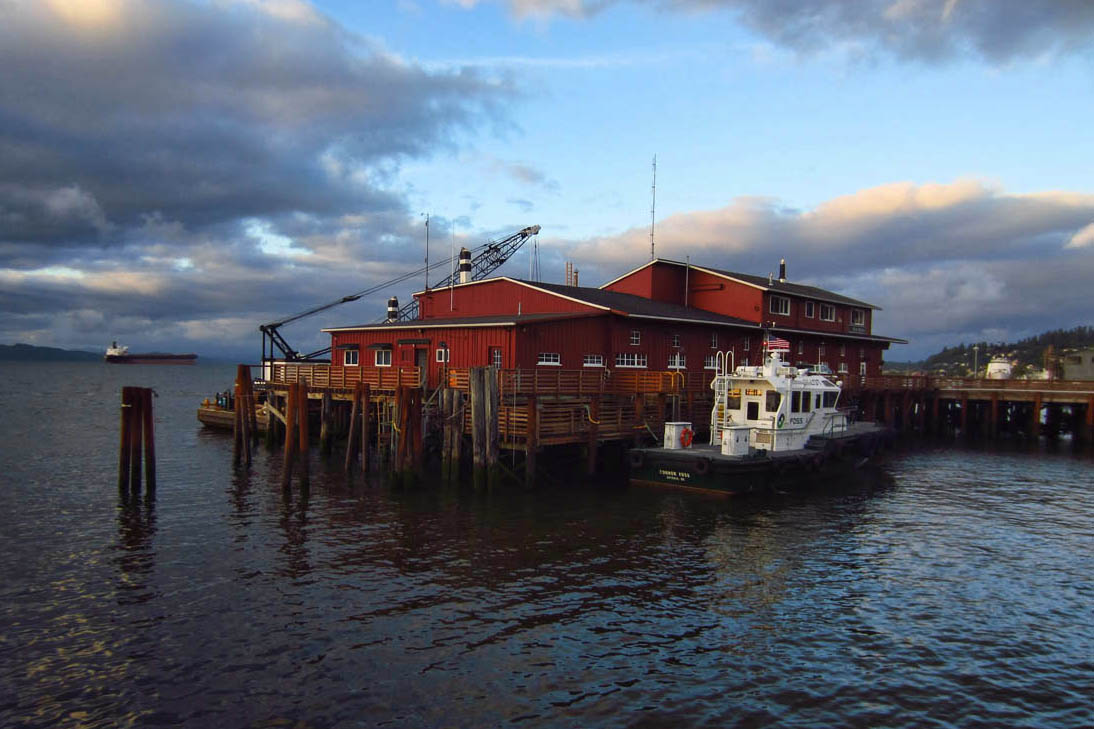 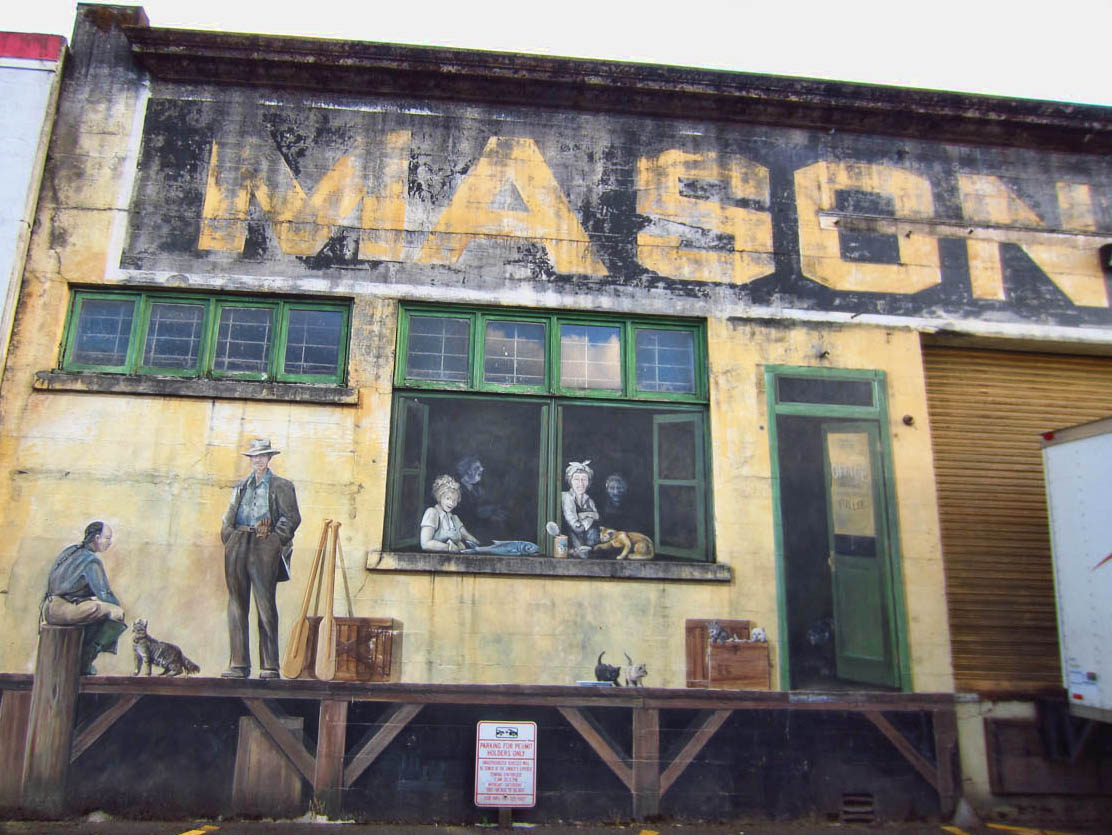 Just as I have reached the outskirts of town along Highway 30, out of the corner of my eye, I catch a glimpse of a group of RVs spaced out in an open parking lot. I am going way too fast to stop, so I look in the rear view mirror to see a small sign on the roadway that says “RV Park.” I find a place to turn around, which is no easy feat while towing, but I figure if I can find a place to stay in Astoria, it will be worth the effort.

I find it odd that this RV Park has not appeared on any of my google searches, Allstays, or RV Parking apps.  A little “twilight zone-esque.”  I pull into the strange RV Park/Junkyard, and there is no one around.   Rigs here range from a fancy new Class A with a shiny new convertible VW Bug toad, all the way down to rigs that are so far from being mobile, they are covered in moss and vines. 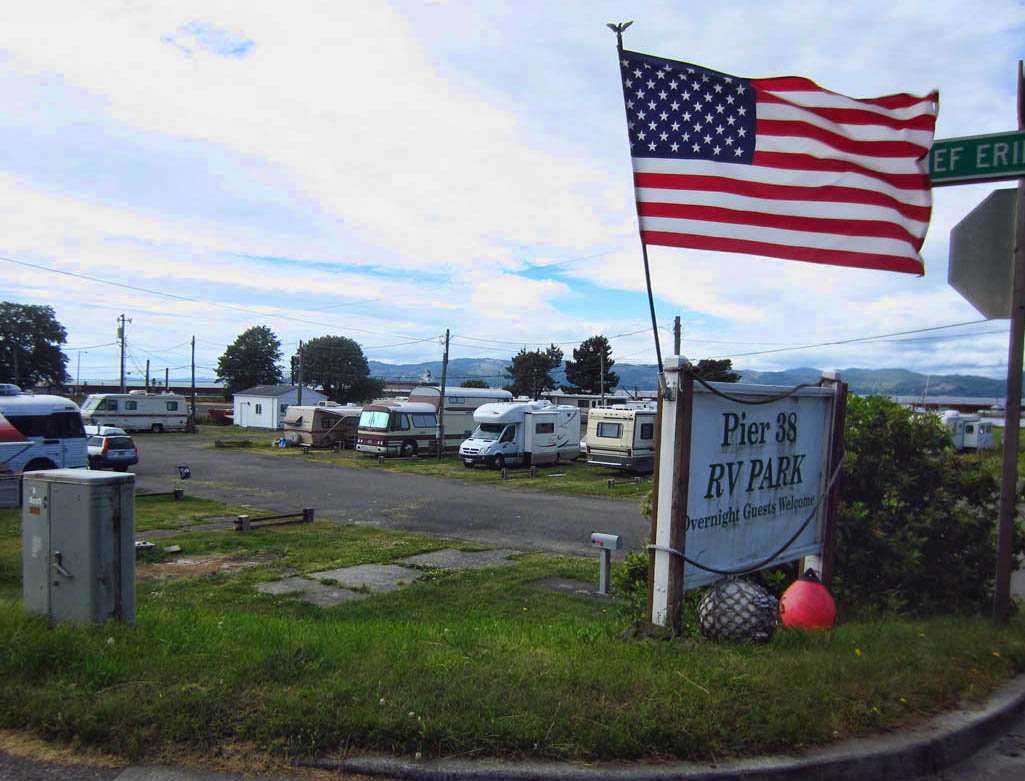 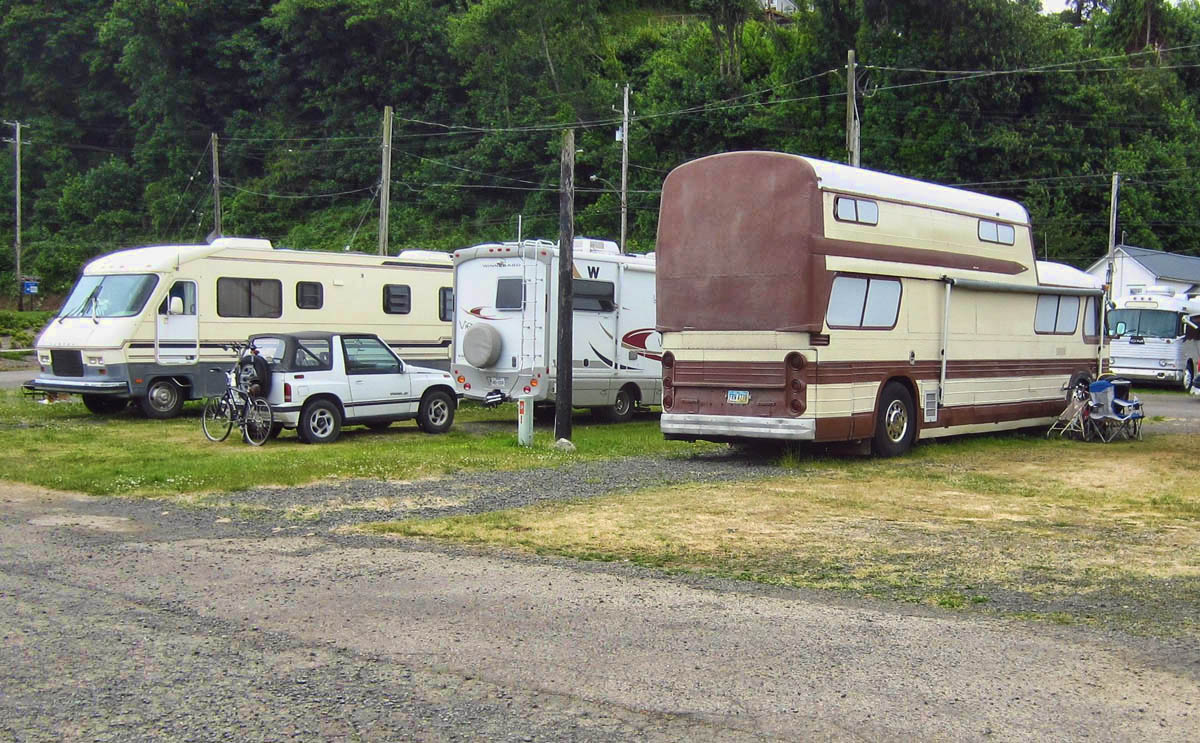 This is like the creepy house on the block…

A sign directs me to the “Manager” in a ram shackled Travel Trailer.  I knock on the door, and a young man answers, apologizing for being asleep at 7:00pm.  I apologize for waking him.   I ask the price, pointing to a site near the park’s edge.  “Forty dollars.  That’s a full hookup, pull through site.”  “I just got solar.  How much if I don’t plug in?”  “Thirty dollars.”  “I just dumped my tanks, and have a full tank of water.  How much if I don’t use the water? “  “Twenty dollars.”   We have a deal….   I ask him when I should return with my registration and payment.  He says “I usually sleep late…any time after noon is good.”

I am a bit tentative at first, as the place makes the Dixie Kampground look like a resort.  But the more I start to explore outside my “circle of comfort,” the more I see I have landed in a gem of a parking place!  Just behind me a few steps is an inviting paved bike path that runs the entire length of town.   And there is a Rogue Brewery Public House, not much more than 100 yards from my door! 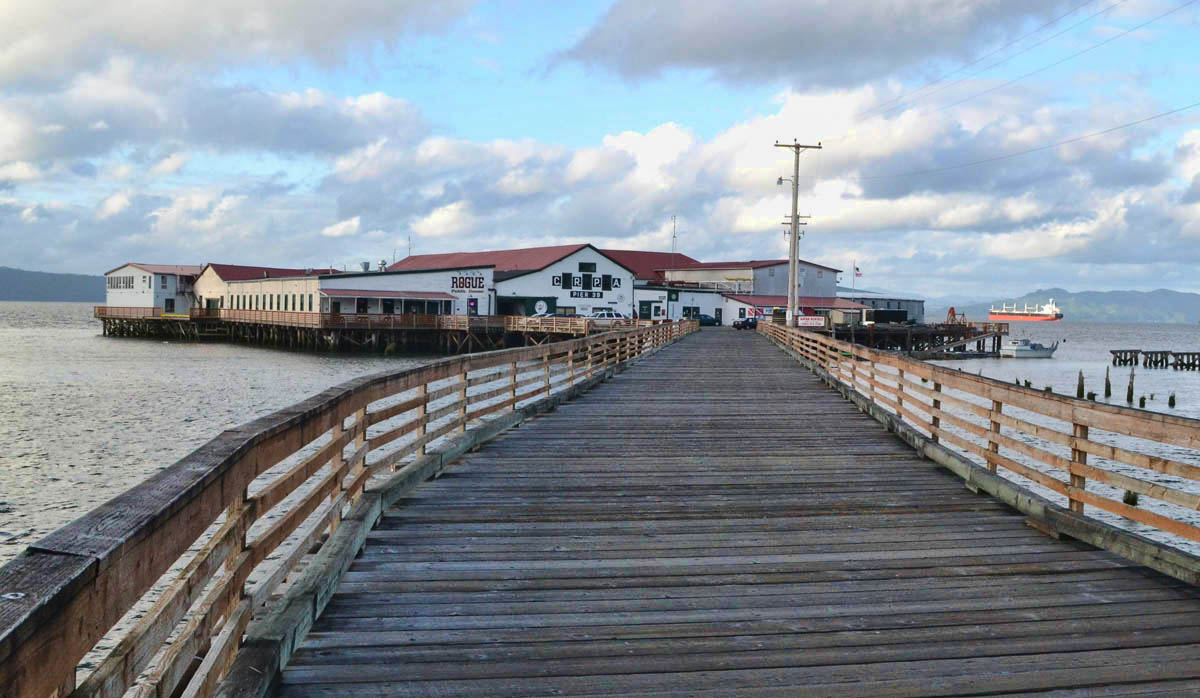 The more I explore of Astoria, the more I fall in love.  At first, it appears to be just another small town along the waterfront.   But after spending a few days in this charming place, I soon discover it is a wellspring of entertainment, attractions, and outstanding eateries.   There is a music festival going on at the refurbished Liberty Theatre.  Funky farmers markets twice per week.   An expansive Maritime Museum, complete with historic lightship.  And enough affordable dining options to rationalize another week of not cooking!   Where to begin?

I think my favorite aspect of Astoria is the outstanding bike path that runs from one end of the city, well past the big bridge to the other end, following the water’s edge the entire way until it eventually ends abruptly right before you reach the water treatment plant.  Probably a good thing.   But what I like about it is the ability to ride or walk to almost any place I want to be, and the ride is never boring.  Since parts of it run alongside old railroad bridges and tracks, one must be vigilant about staying the course, lest the tire get stuck in its tracks while the rider continues on with velocity.  Don’t ask me how I know this… 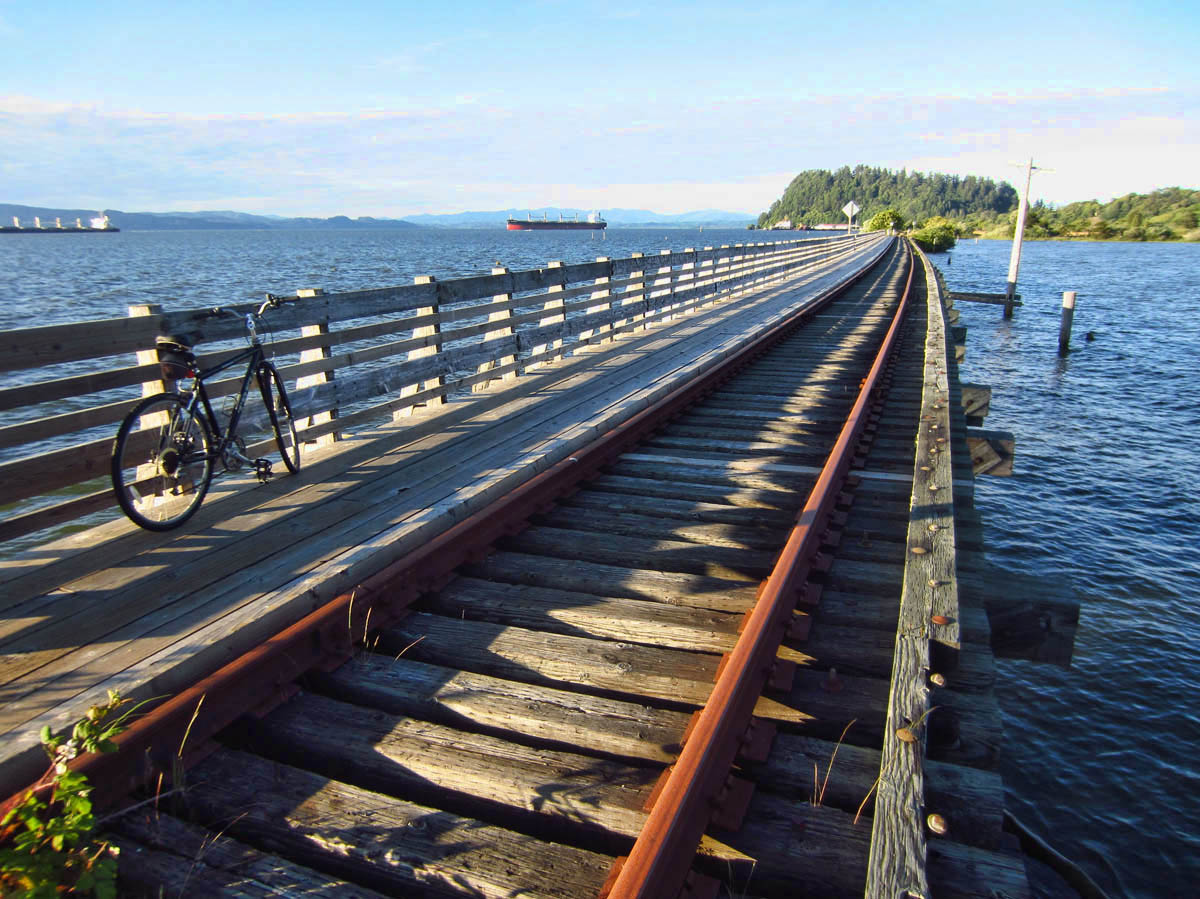 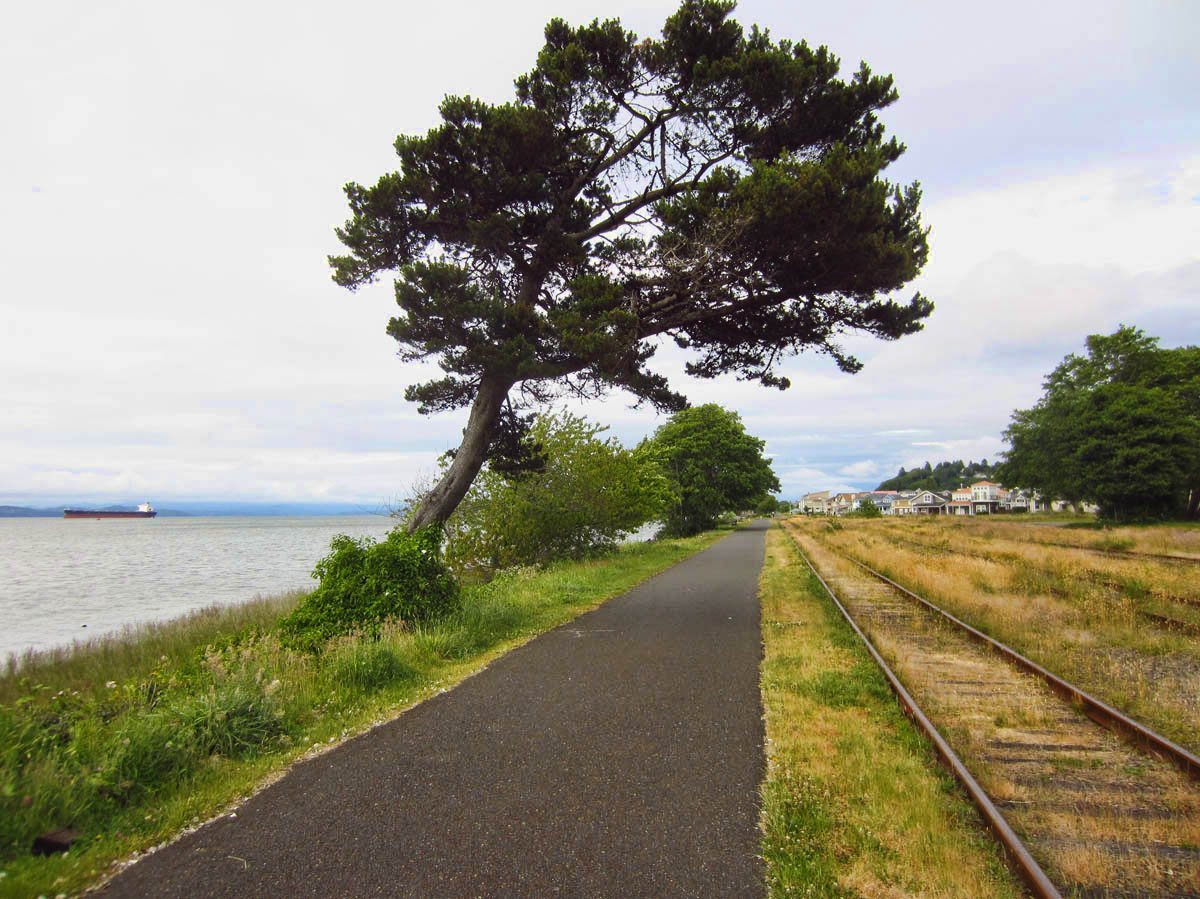 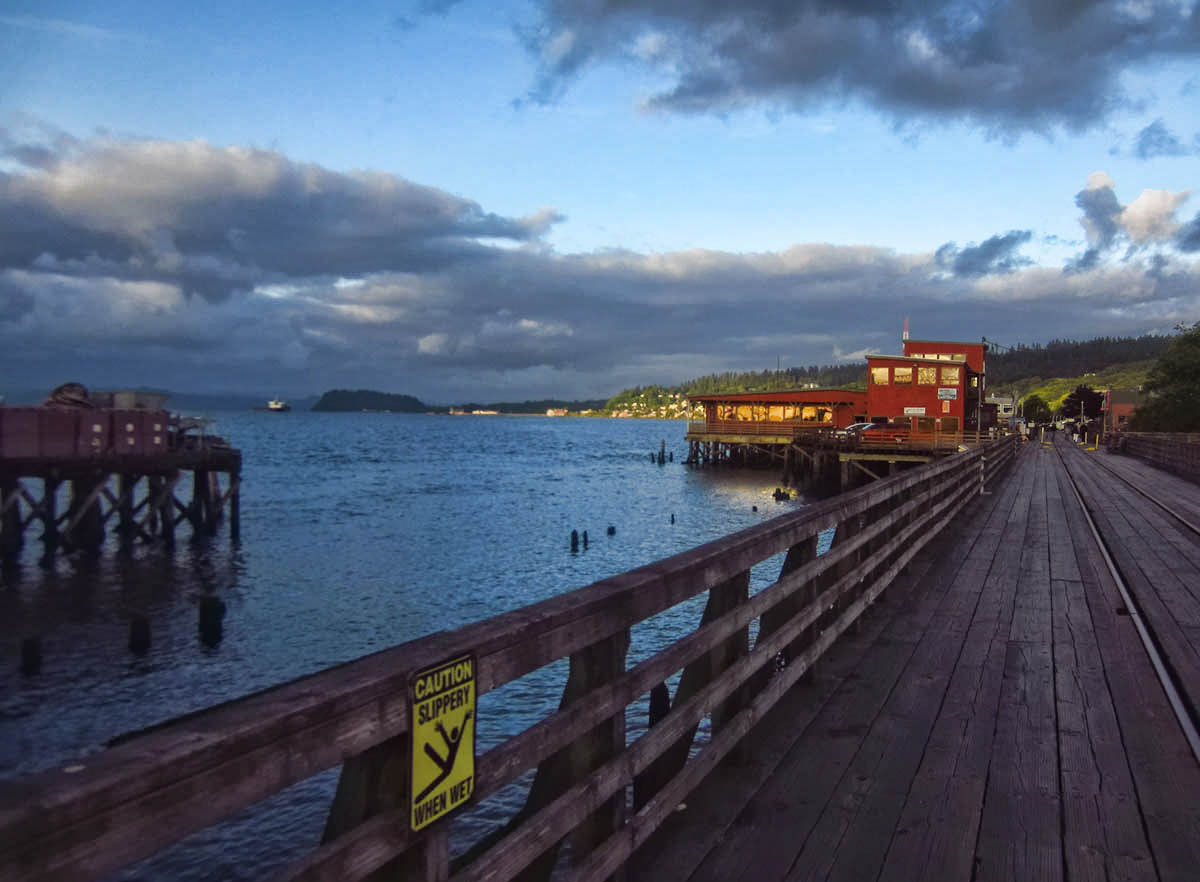 I also surprised myself by spending almost two hours in the Maritime Museum.  I am not typically a “museum person,” but being a lover of all things related to the sea, this one held my attention until the last call for all visitors to please leave now.   I loved touring the crew quarters, galley, and wheel house of the Columbia Lightship, a “floating lighthouse” that served as a navigational buoy six miles off the entrance to the river.  The Columbia was the last active lightship along the west coast, taken out of service in 1979. 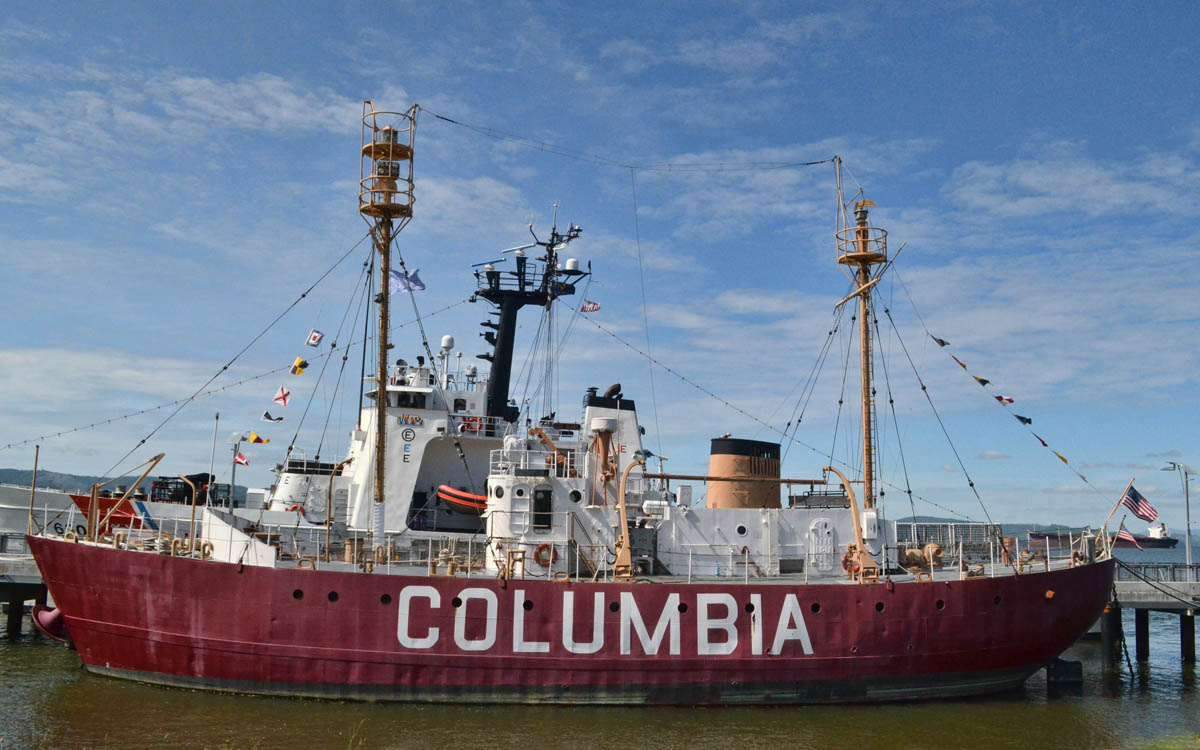 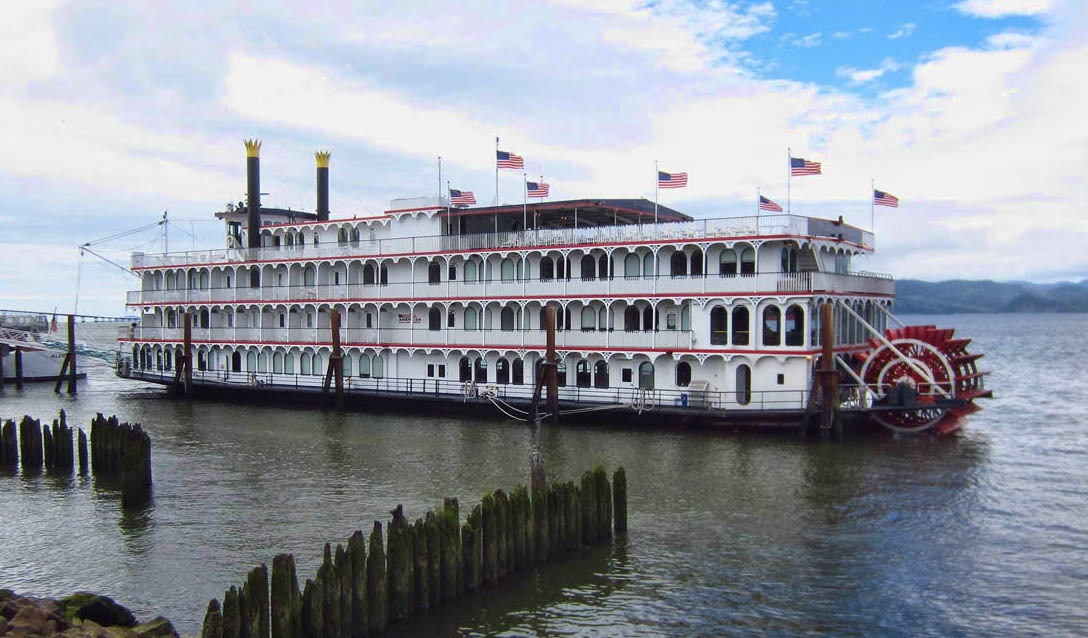 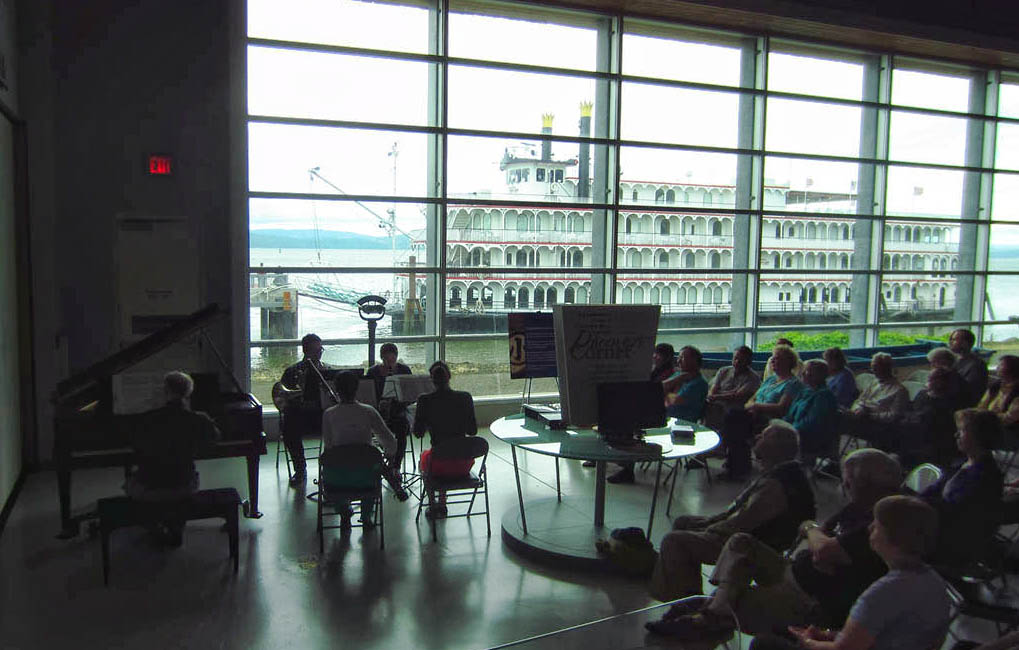 Visit to the Maritime Museum was accompanied by a nice live classical performance.

Astoria’s famous “Column” gives the city a bit of a mini-San Francisco feel, as the steep, curvy streets leading up to it could rival those of Lombard Street.    The views of the Columbia River and its tributaries were worth the 163 spiral steps to the top.   Built in 1926, the exterior is covered by a mural depicting significant milestones in Oregon’s history, such as the “land marking” of the Columbia River (I won’t say “discovery,” because the Native Americans had already discovered it,) and the Lewis and Clark expedition. 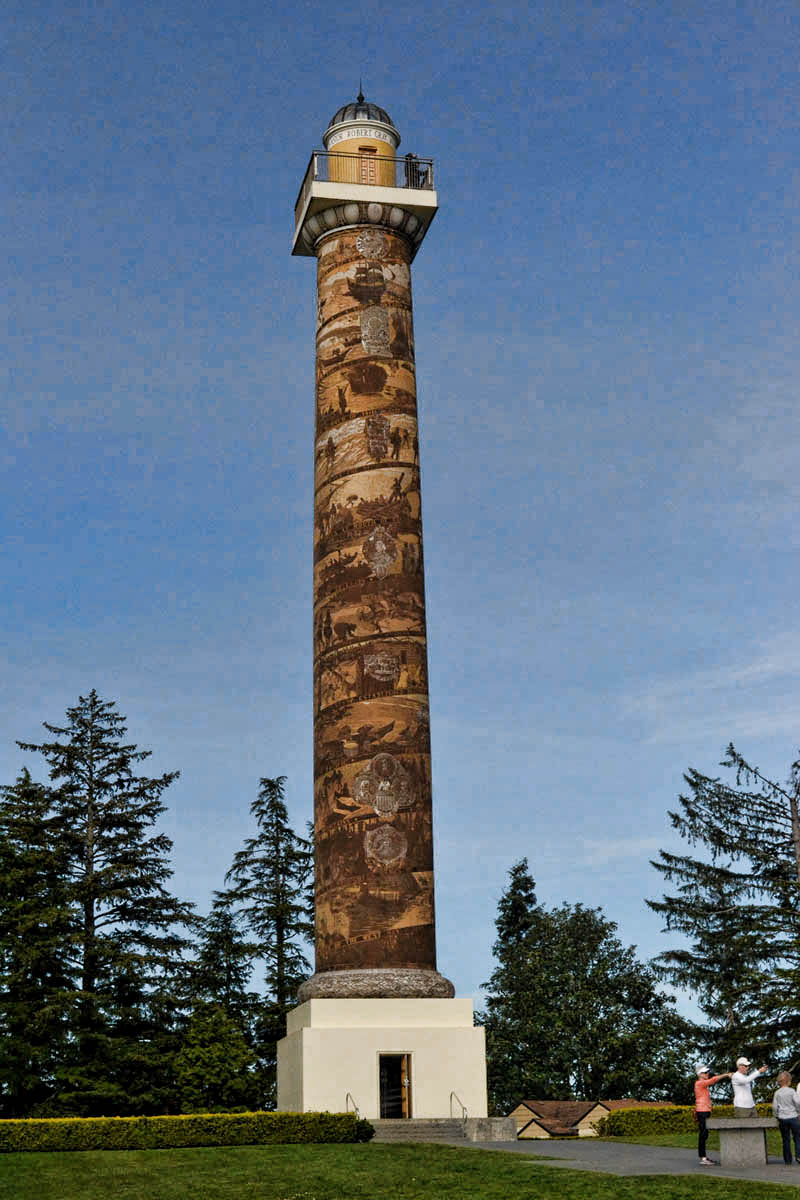 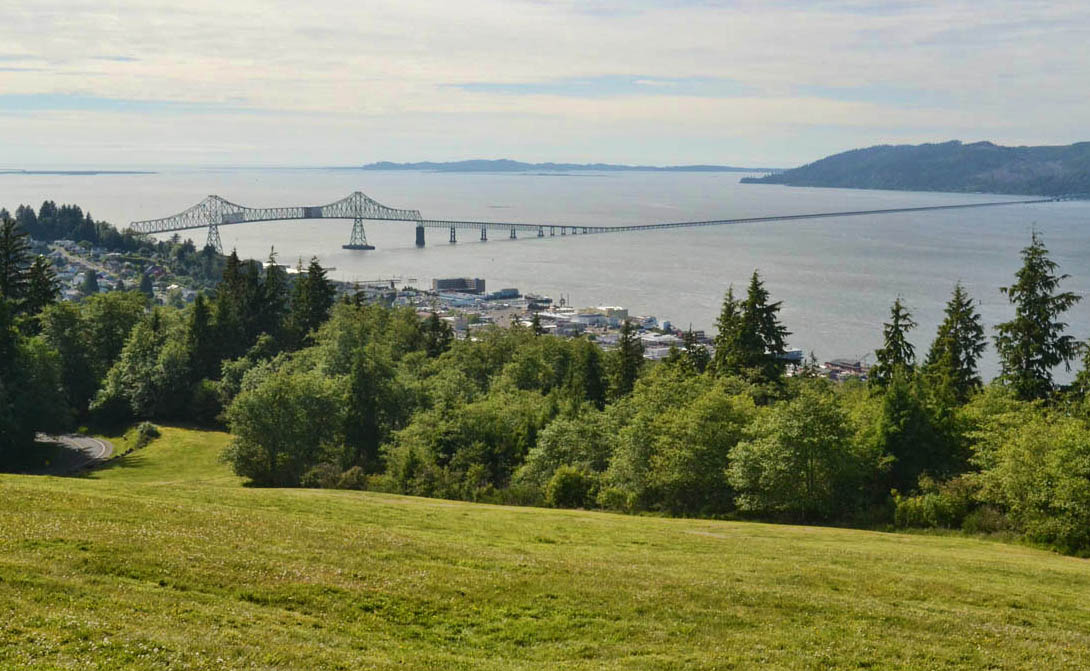 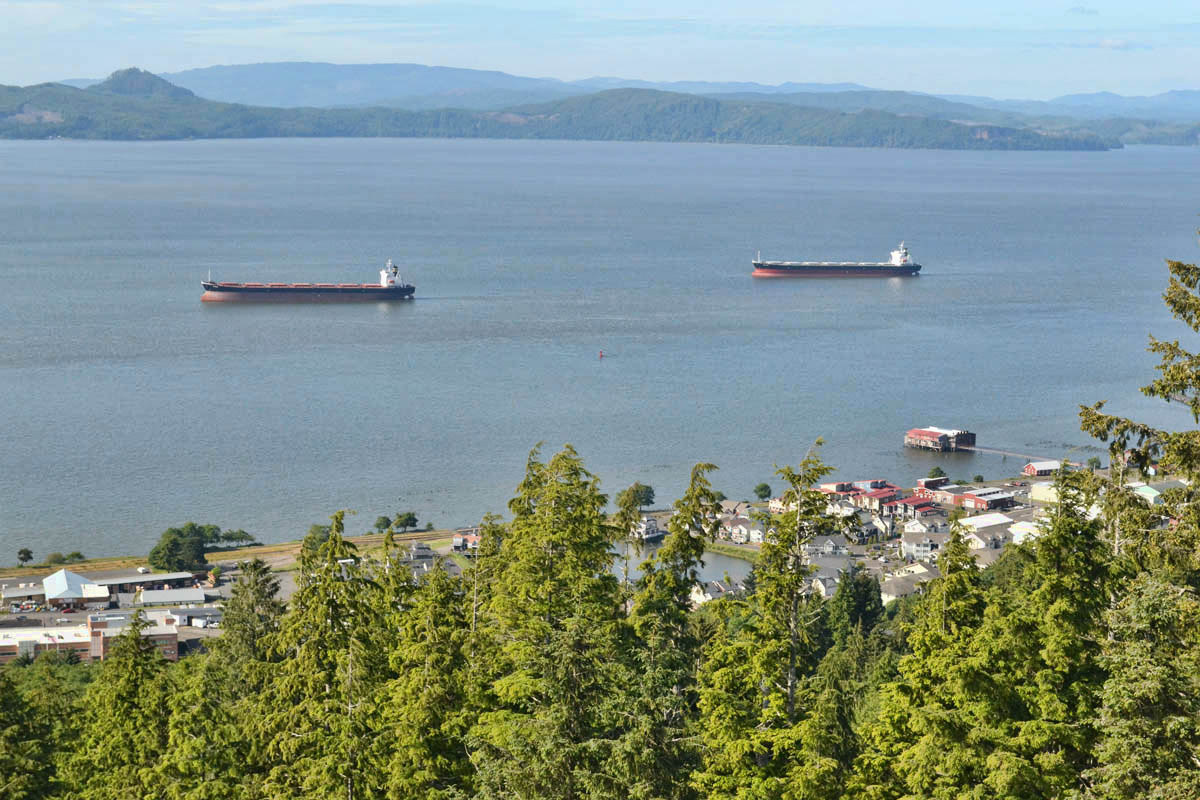 So I can’t talk about Astoria without mentioning the plethora of interesting, eclectic dining options.  Of course, there is everybody’s favorite, Bowpickers located in a gutted-out gillnet boat.   How odd that I went there for the first time one afternoon, completely unaware of my good fortune to find only one person in line!  Every time I tried to go back after that, there was at least a 20 minute wait!   Here you have but two menu choices;  A whole order of beer battered, albacore tuna fish and chips, or a half order.   The only thing easier than ordering is enjoying! 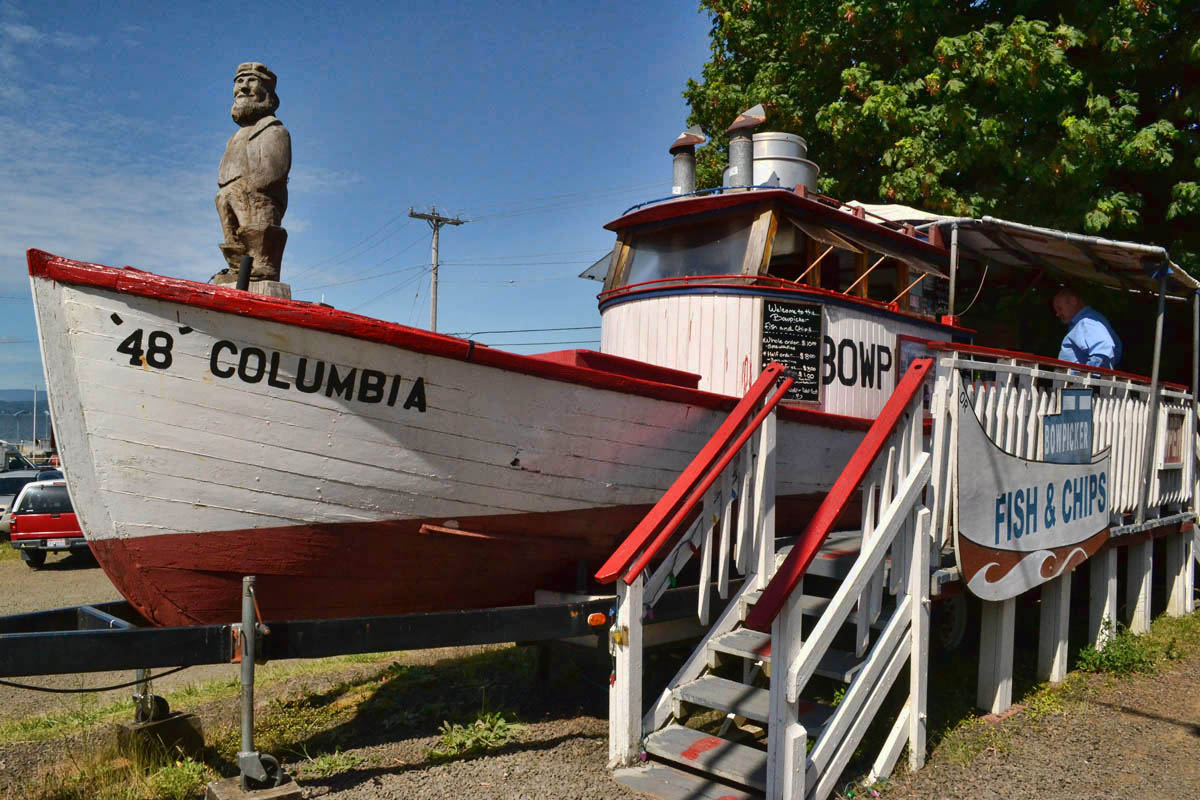 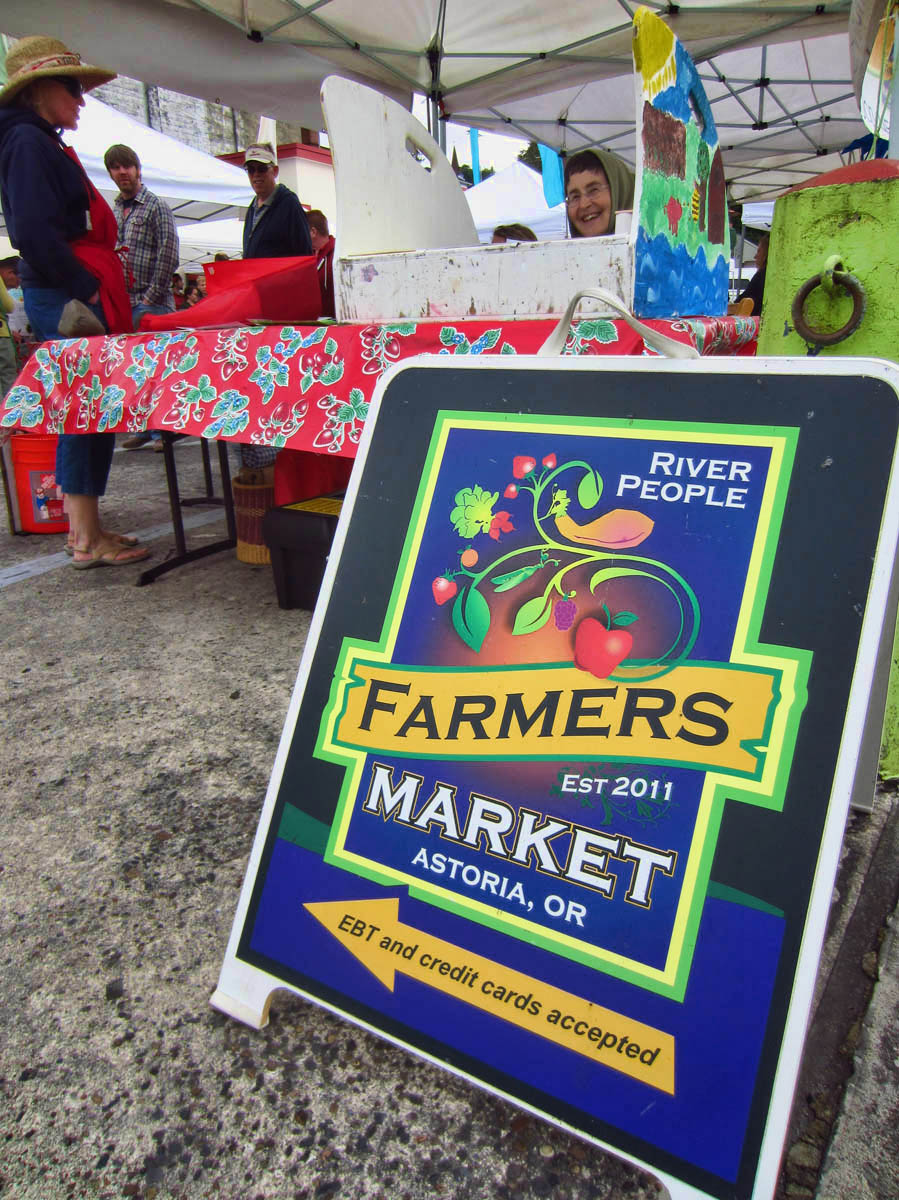 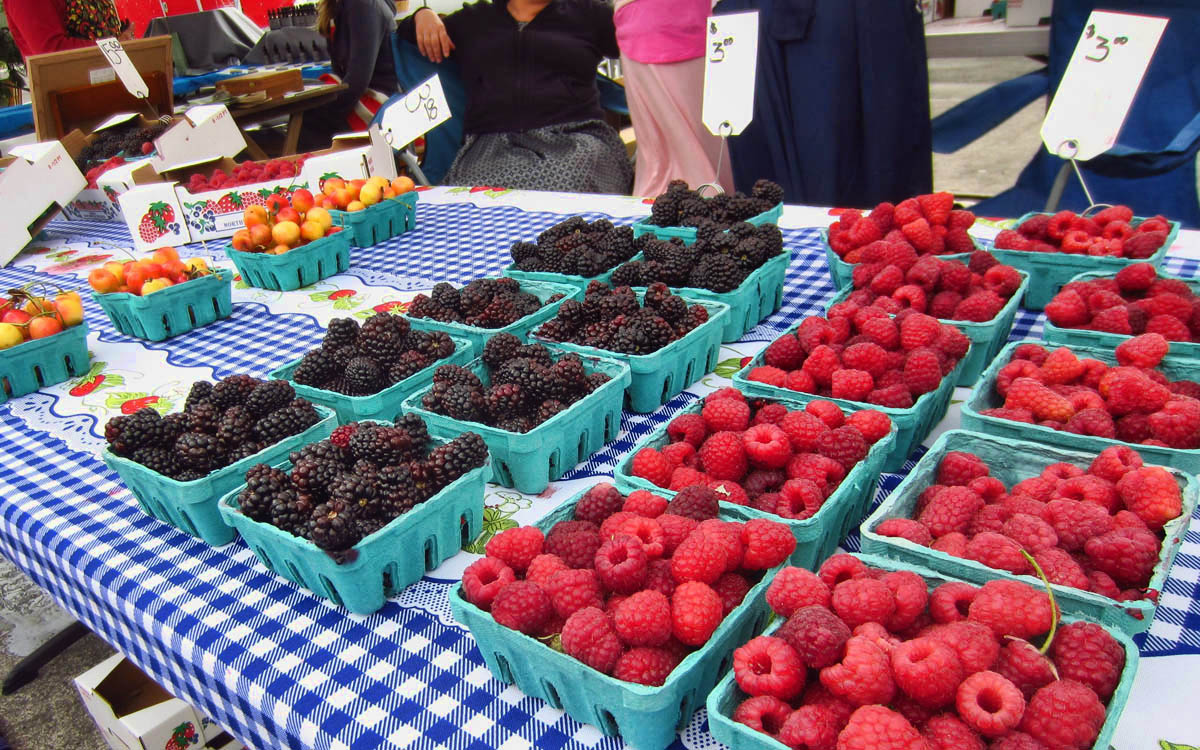 A little more upscale options included Clemente’s, which had an excellent wine pairing for each menu item. A delectable splurge! And the crazy little Columbian Café, where I sat at the bar and watched the chef prepare my entire eclectic, delicious dinner on a breakfast grill.   Had it not been for the Wheelinit blog, I would have missed this charming gem of a spot, which turned out to be a favorite. 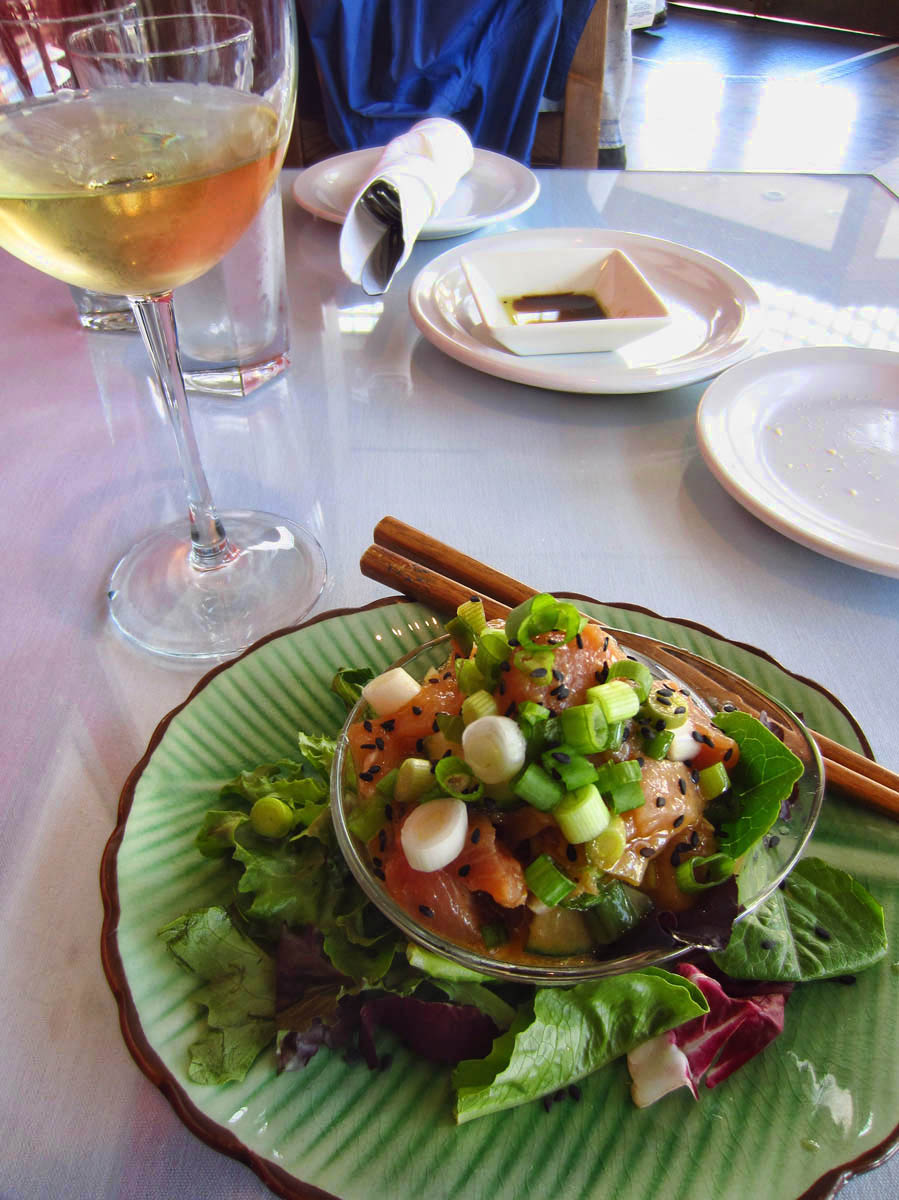 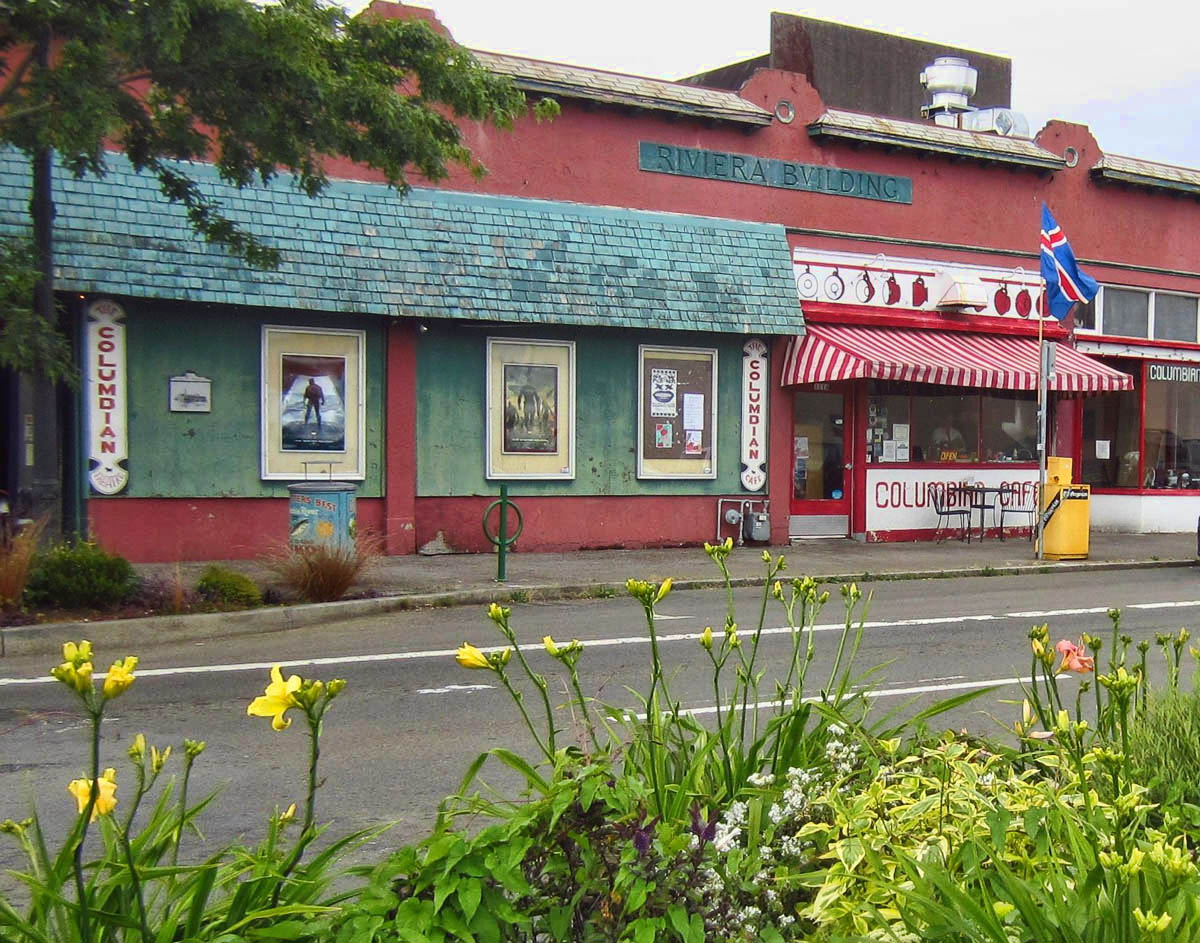 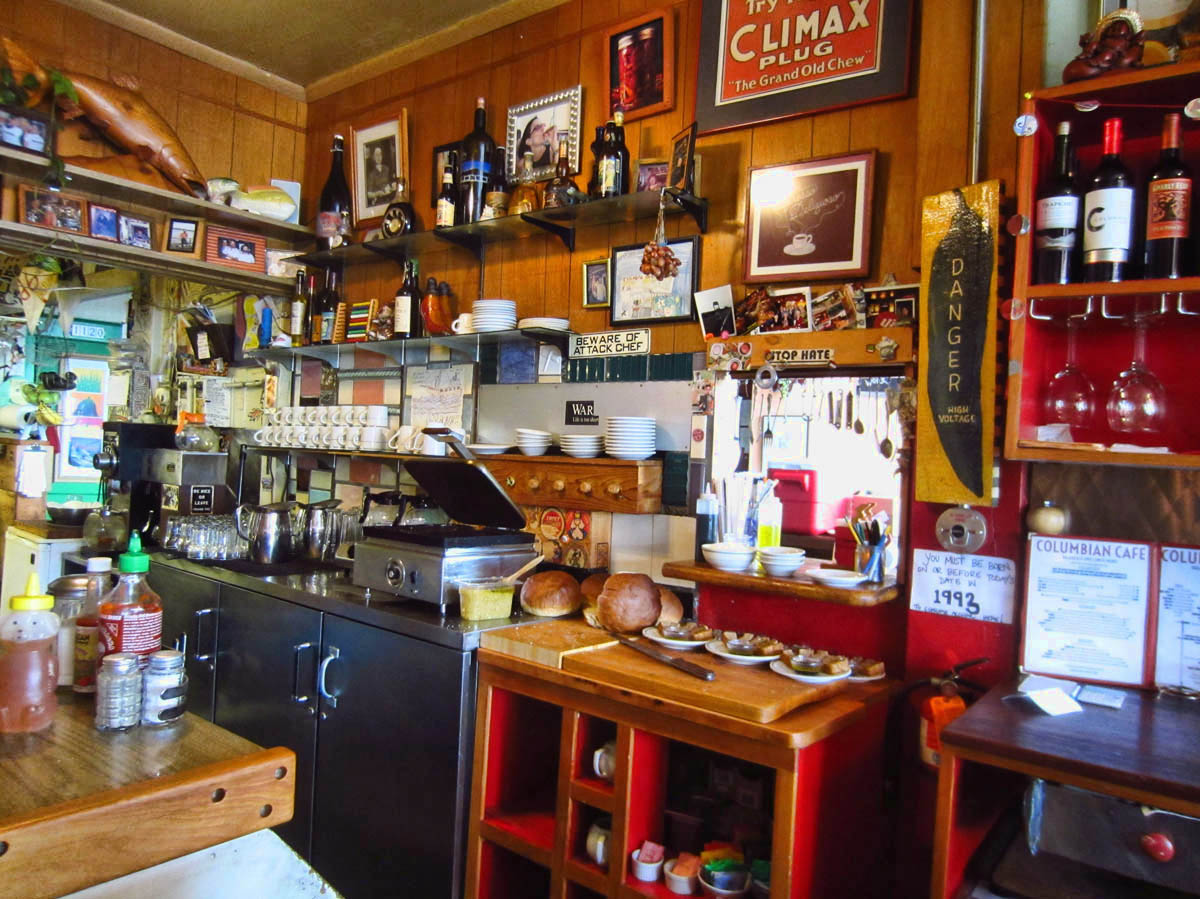 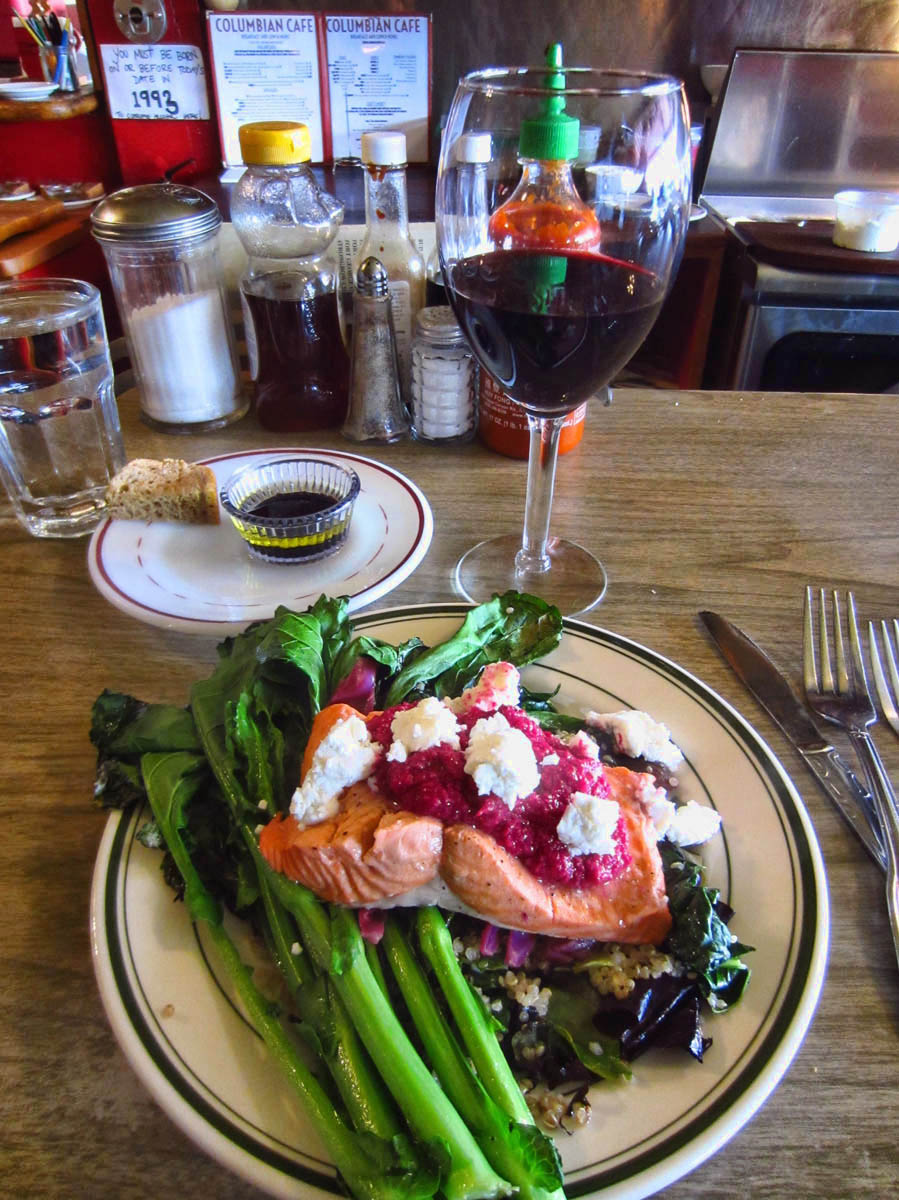 But maybe my favorite part of Astoria was the oddest of all….its smell.  😉  There is something about that “deep well aroma” of river water when it meets the sea.  I have only smelled it one other place, and that is at the tip of my beloved Manhattan, where the Hudson meets the upper Bay of the Atlantic.   I learned to sail by following the direction of that scent, and it brings back of flood of good memories with each breath. 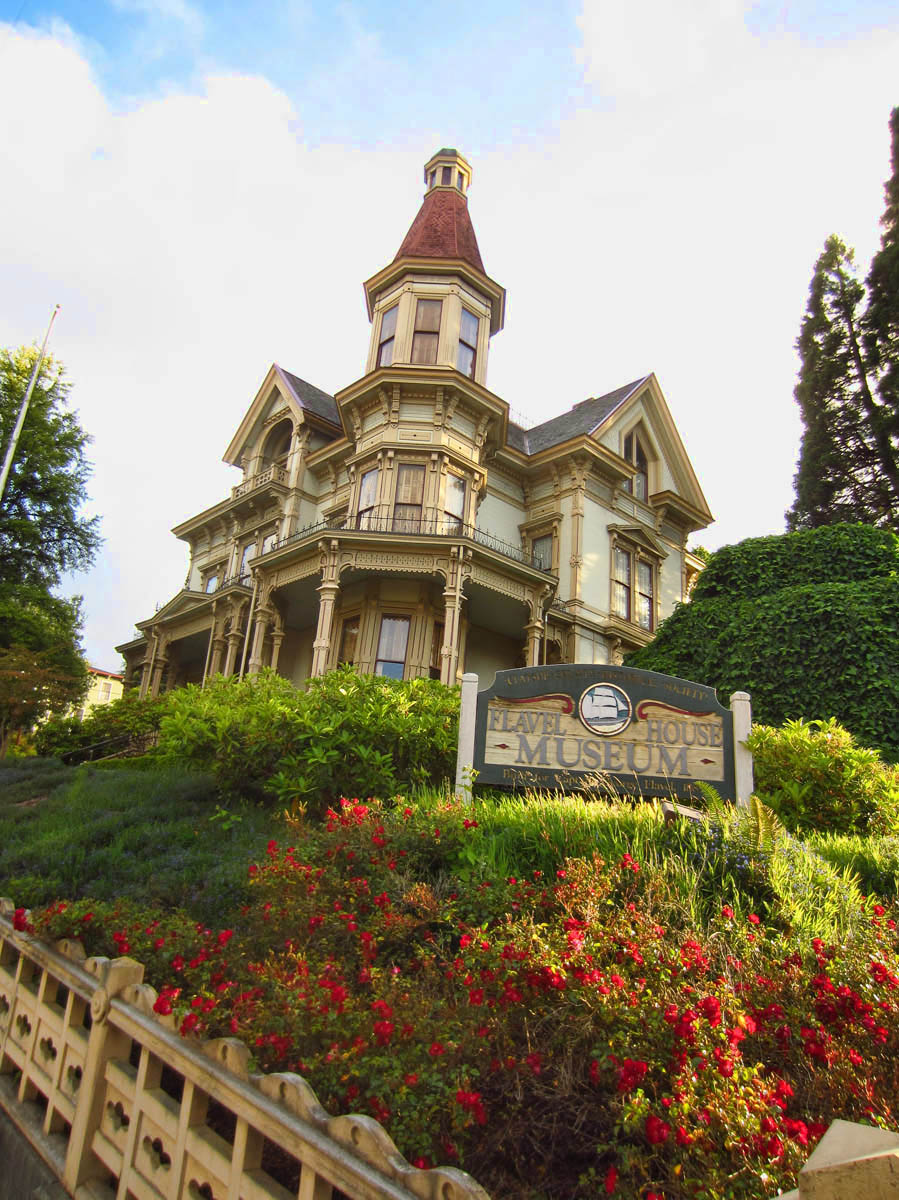 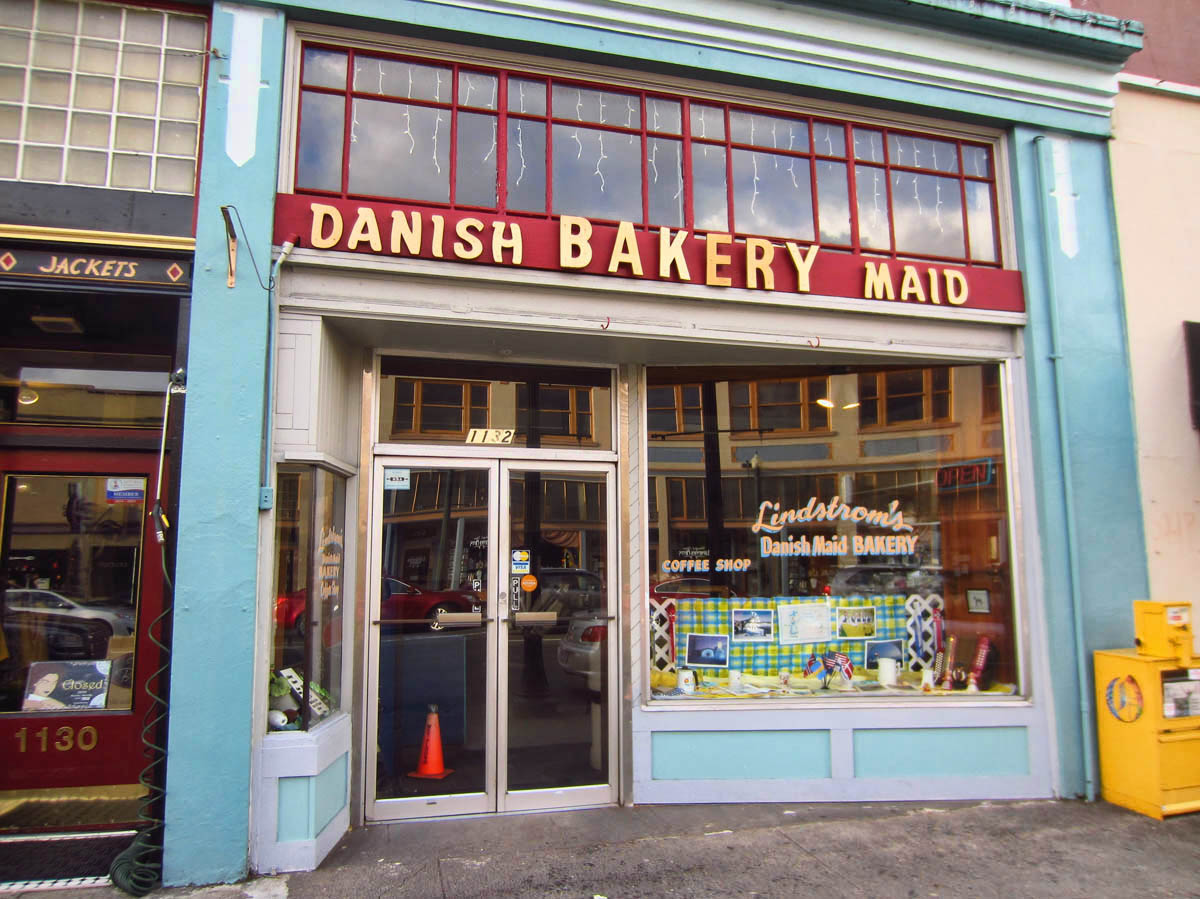 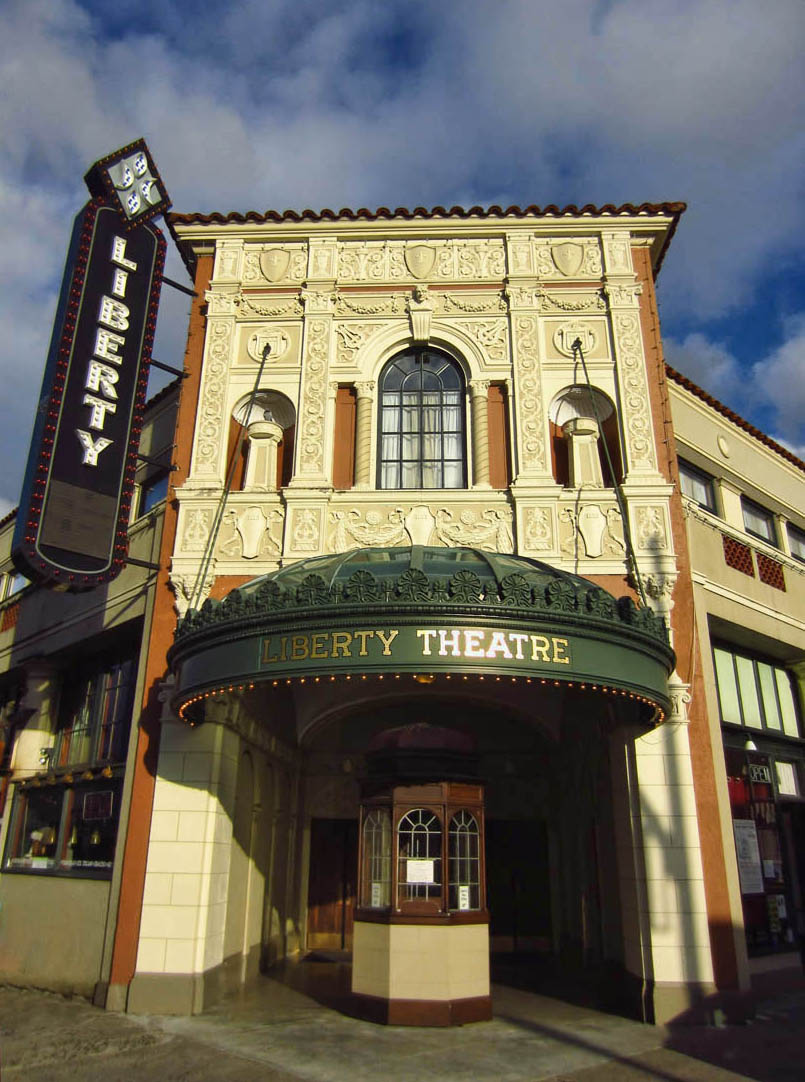 As is often the case when I stumble upon an accidental quirky RV Park, I am hesitant at first. But come the week’s end, I am not ready to leave.  Astoria was a particularly tough goodbye…

43 thoughts on “Anchored in Astoria”