It was my sixth or seventh trip to San Miguel de Allende. I’ve lost count of the visits there spanning from two weeks to two months since 2007. My brother Don first broke the news that he had read about this mountain town / artist community that some gringos consider utopia in old Colonial Mexico, so he was driving his Toyota Land Cruiser down from Texas for a month to check it out. He had received a book for Christmas, Tony Cohan’s On Mexican Time, a book that would prompt a permanent paradigm shift for us both about our neighbors to the south. Since that time, we have returned every year, at least once a year to rekindle the connection with such a colorful culture. 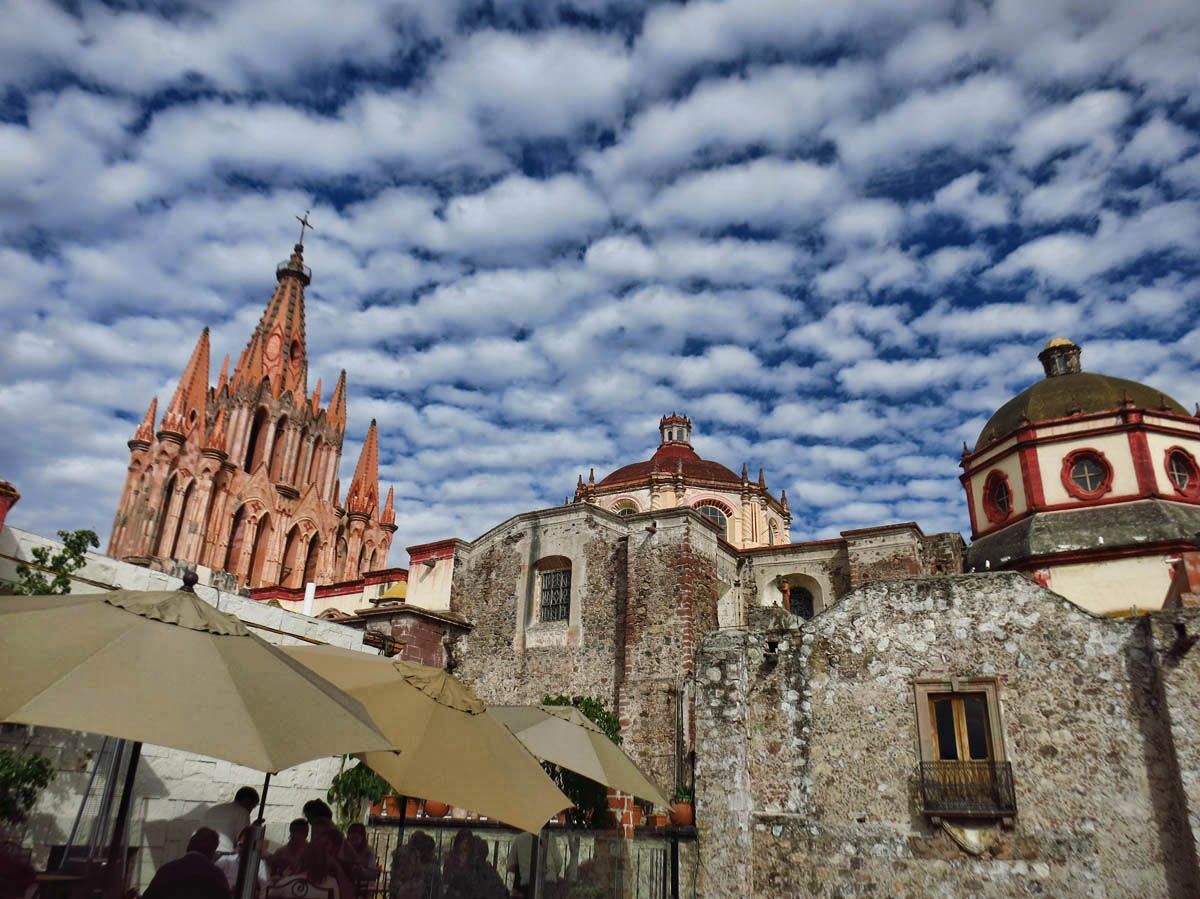 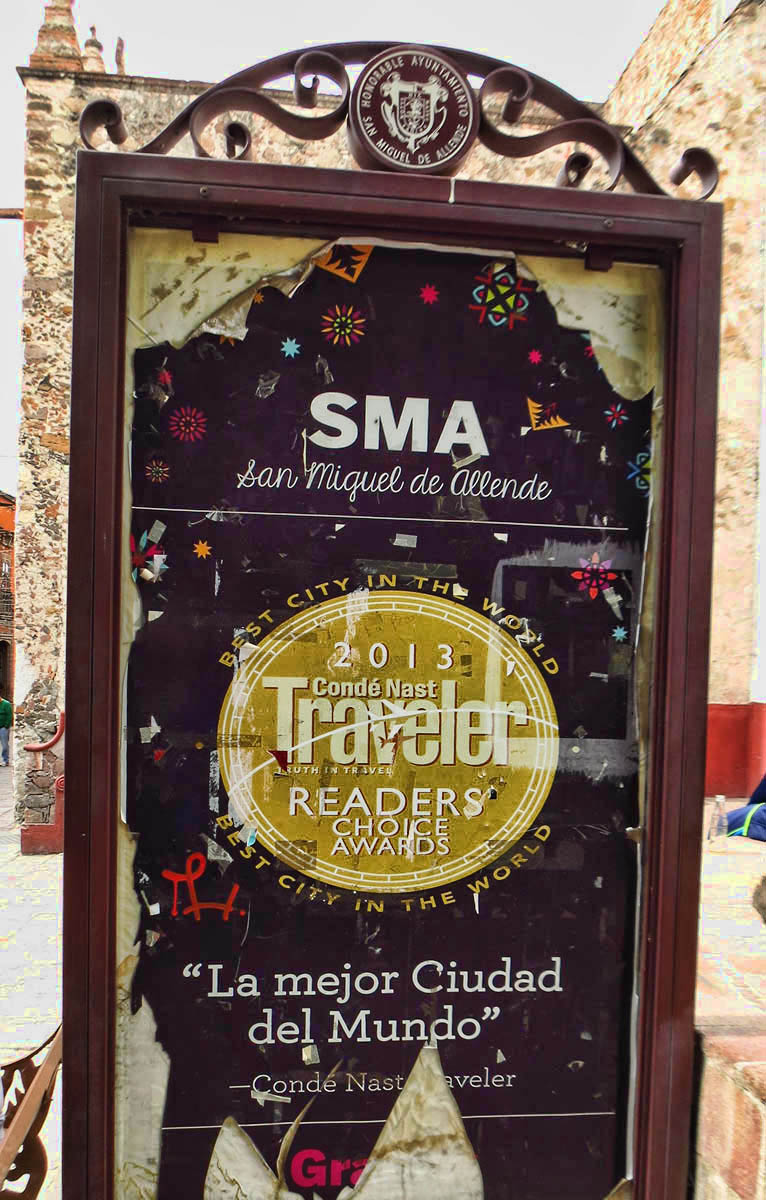 San Miguel de Allende was voted “Best City in the World” in Conde Nast 2013 Reader’s Choice Awards. A blessing and a curse. 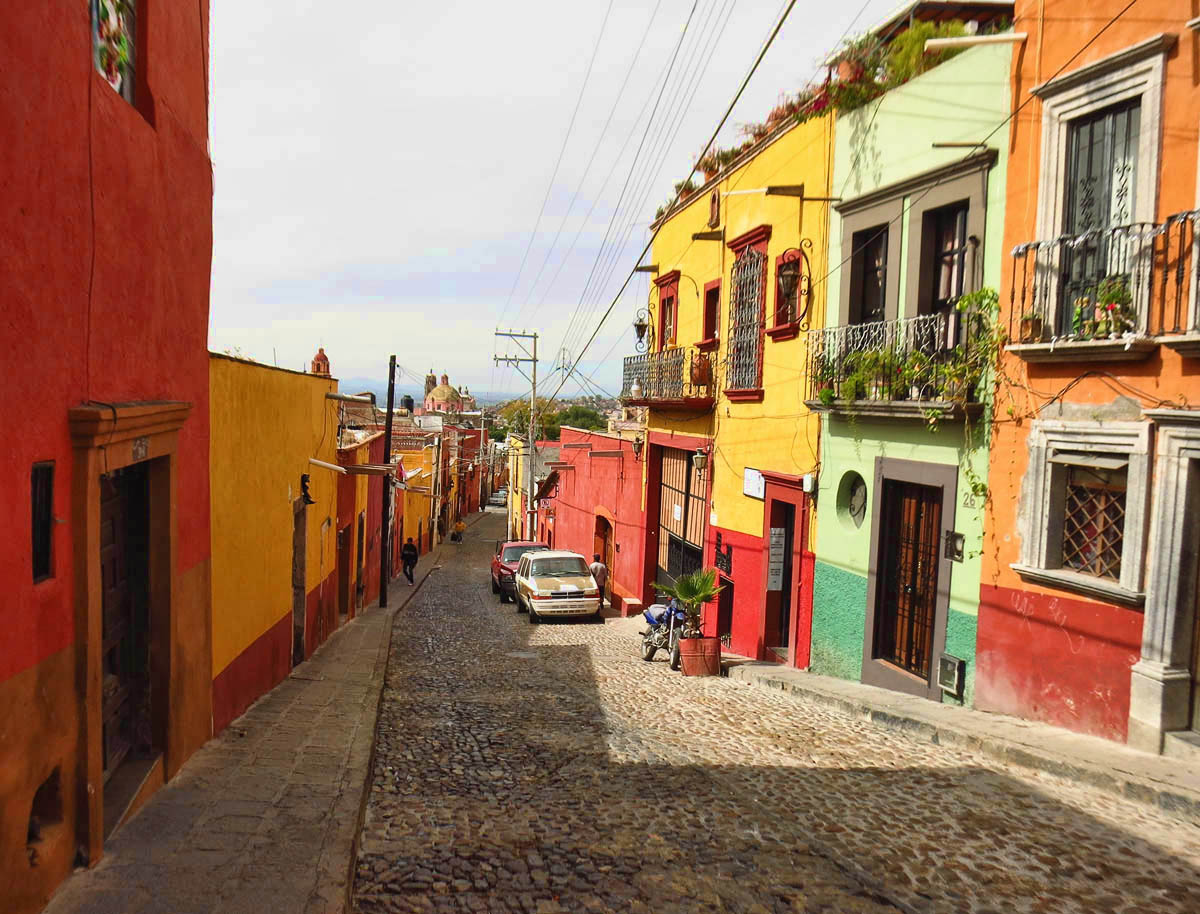 Whenever I arrive in San Miguel, I drop my suitcases and head into the “centro” to see what has changed since I was last here. My particular apprehension on this visit comes as a result of San Miguel’s having received the dubious distinction of being voted “The Best City in the World” in Conde Nast 2013 Reader’s Choice Awards. Prior to that, most people said “Where?” whenever I was headed back to San Miguel. So I wasn’t sure what magnitude of change to expect, now that it’s been “discovered.” 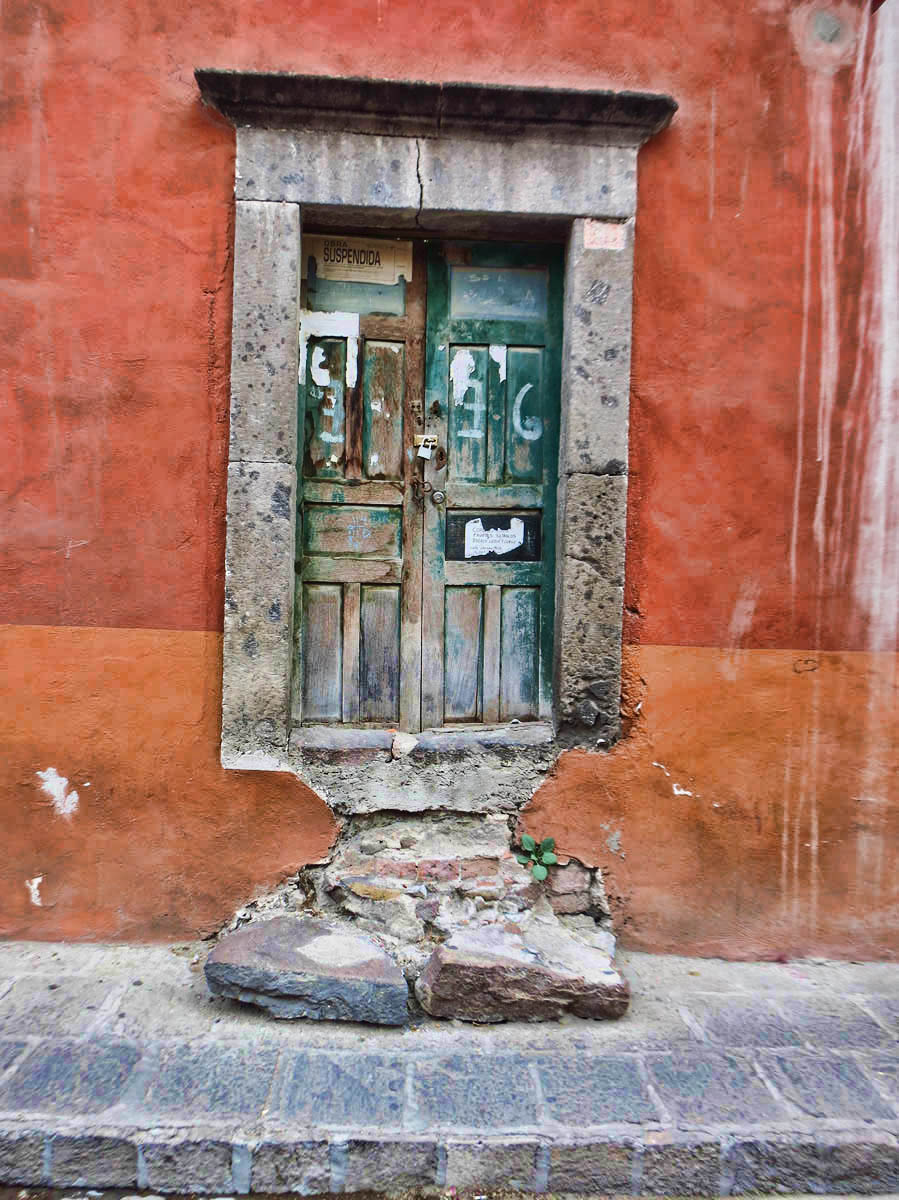 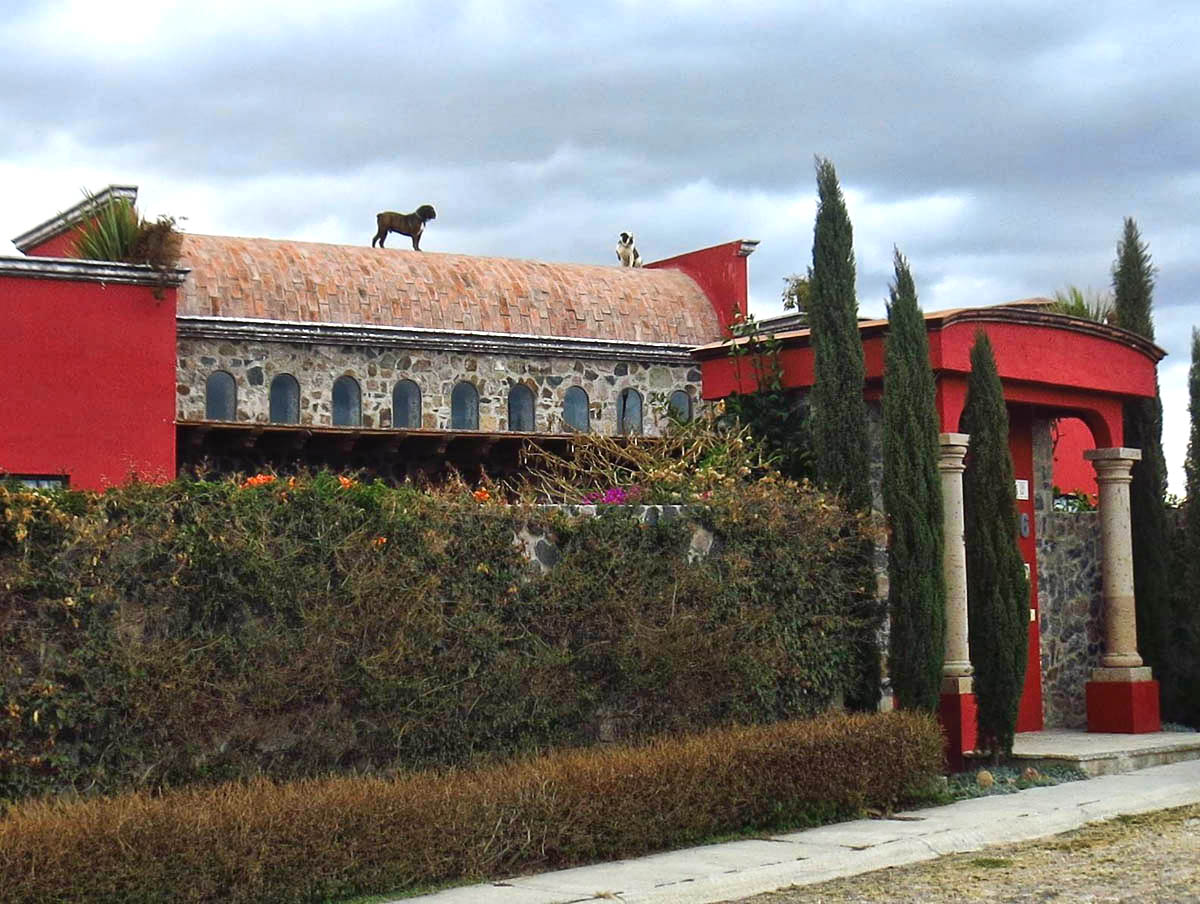 Though it has gained a bit more notoriety, it’s not yet lost. There seem to be a lot more international tourists than in past visits. Foreign dialects carrying Mexico guidebooks now outnumber the number of expats wearing flouncy hats and carrying yoga mats. The only saving grace is that there is no airport here….yet. 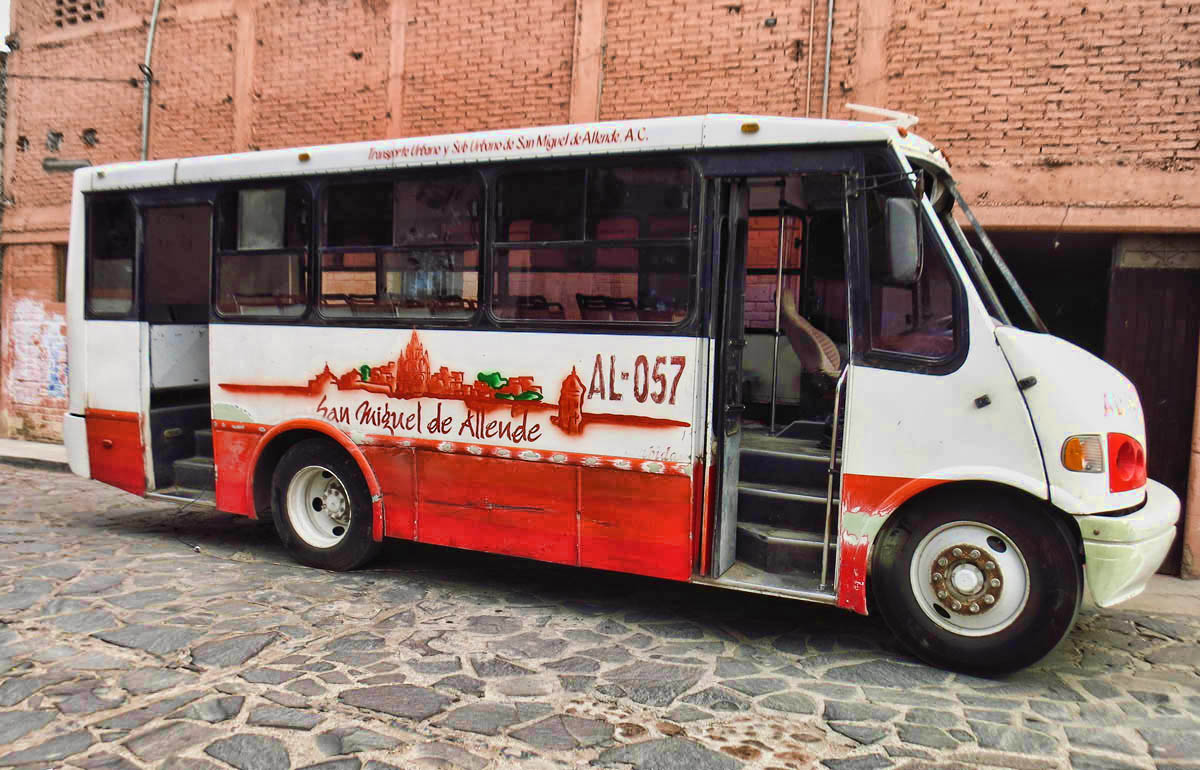 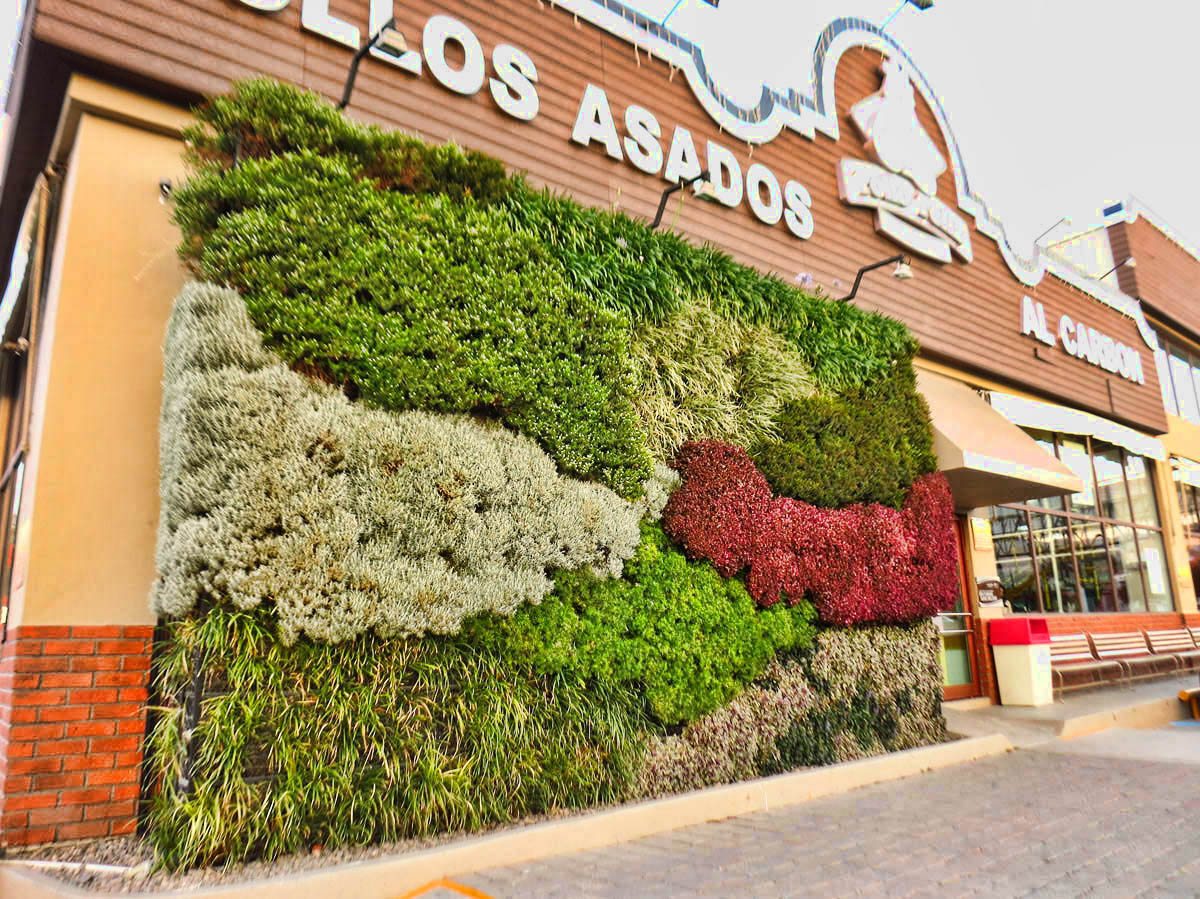 I had never seen a vertical garden before! 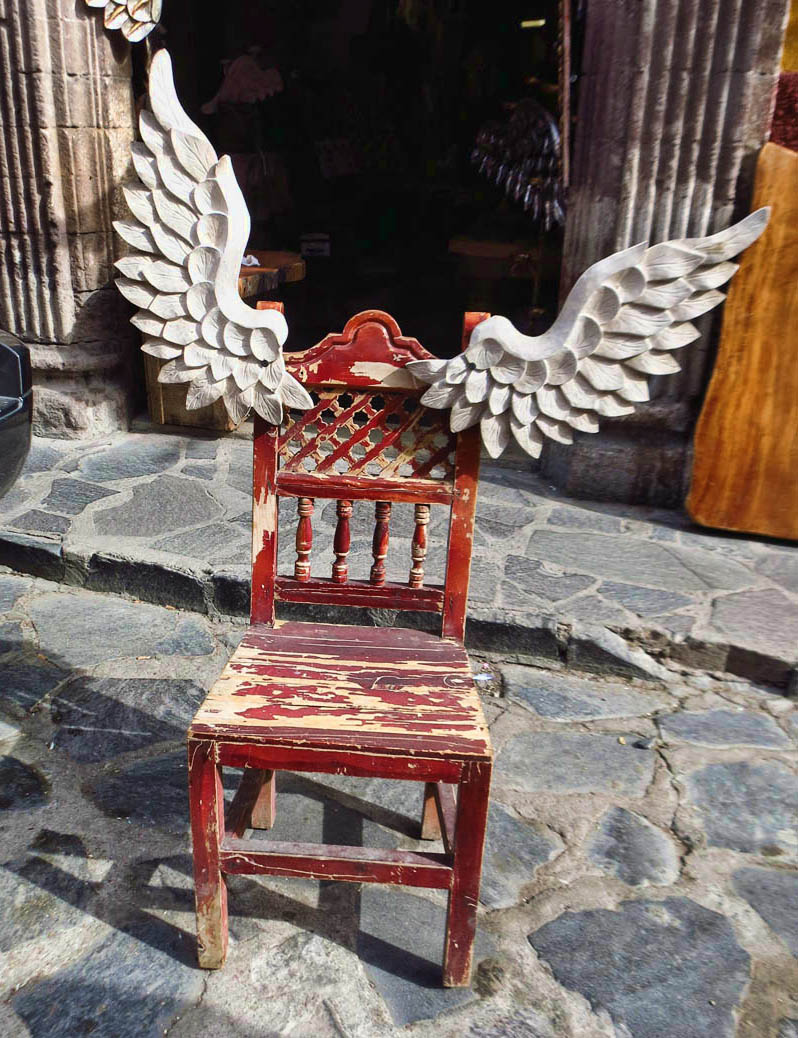 Mexico is a bit of a dichotomy, in that progress happens fast in some ways, and not so fast in others. There is a new, hideously ugly department store in town, Coppel. It caused quite a bit of controversy, similar to the “big box stores” that threaten local shop owners in the US. Yet progress has also brought improvements such as preservation of the Centro Historico where unsightly power lines are being buried below the ancient cobblestone streets. Progress, or lack thereof, still results in controversy as debate ensues about the type of stones used to replace the original cobblestones. 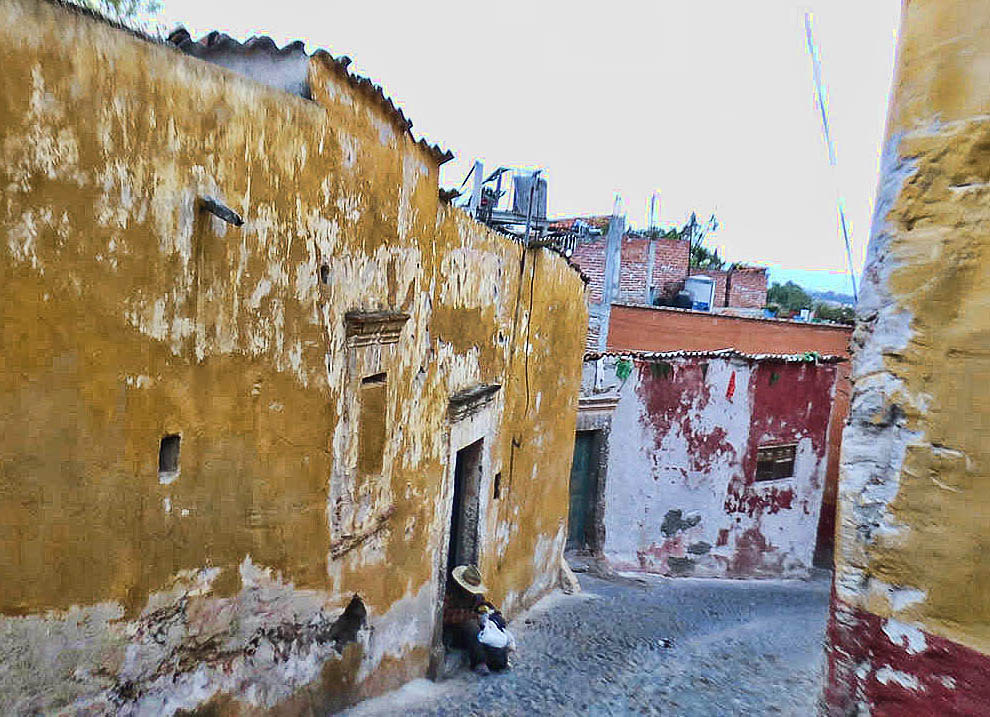 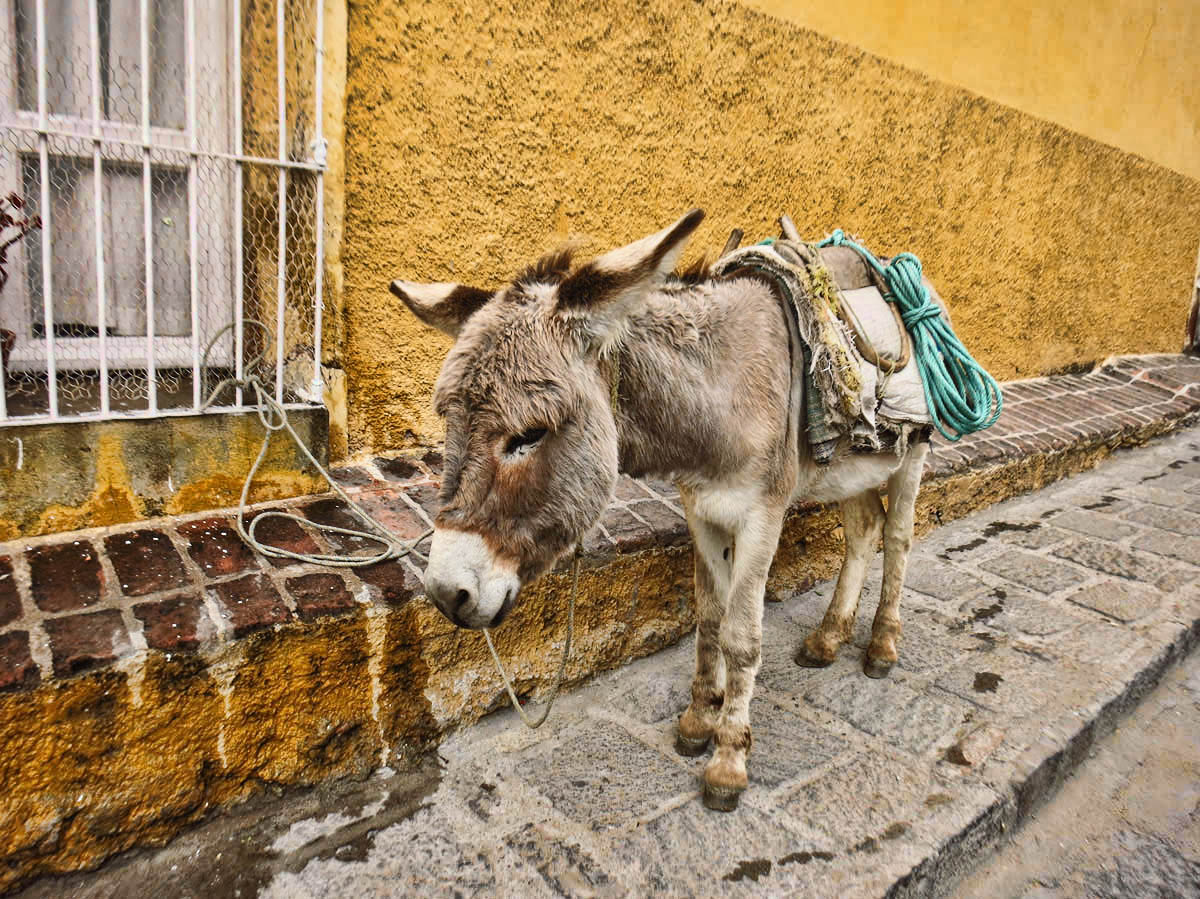 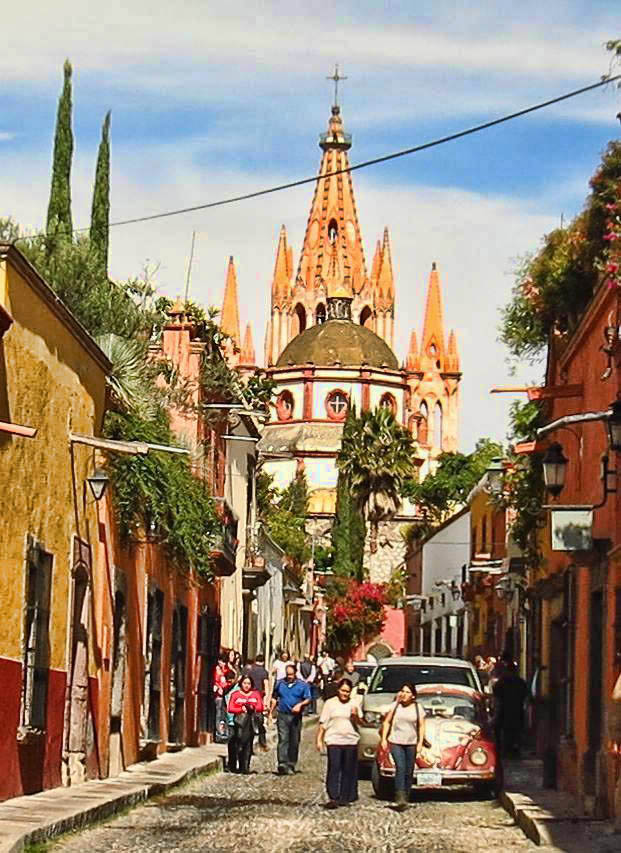 Restaurants don’t seem to come and go with the speed they do back in the US. All my favorites are still here. And thankfully, no chains have infiltrated, save for a few local stores offering the Mexican version of Kentucky Fried. Except for Starbucks, that is. Still haven’t figured out how that one snuck in, but I do confess to camping out in their comfy leather chairs long enough for a latte’ and a load off my feet after a long walk across town. 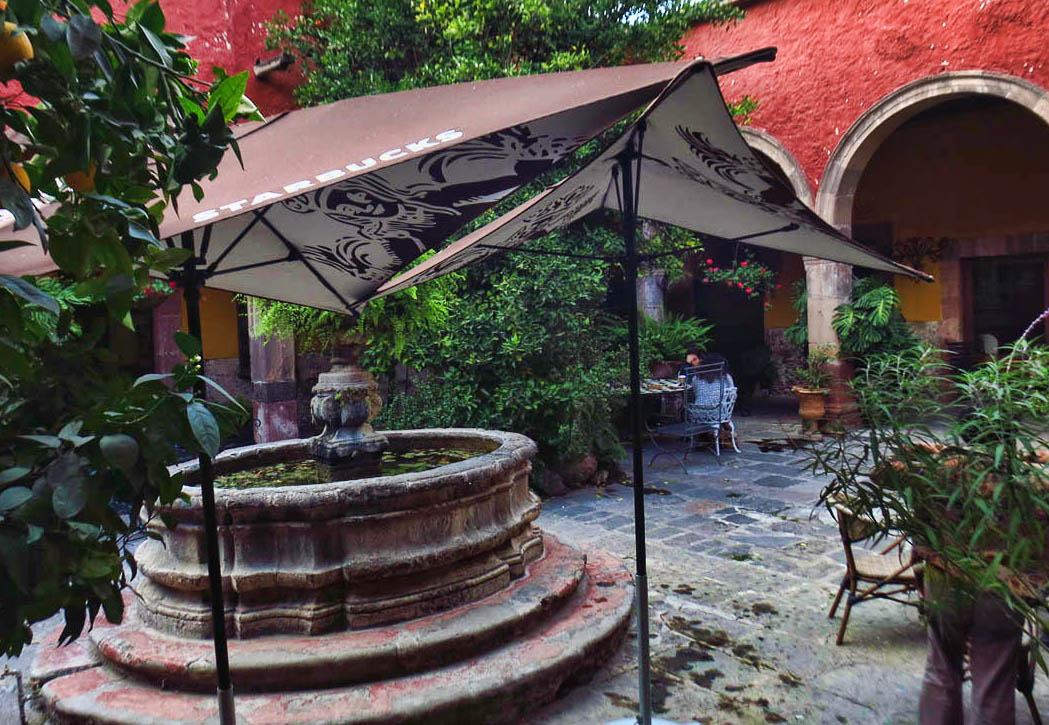 Starbucks has an atmospheric courtyard in primo location. 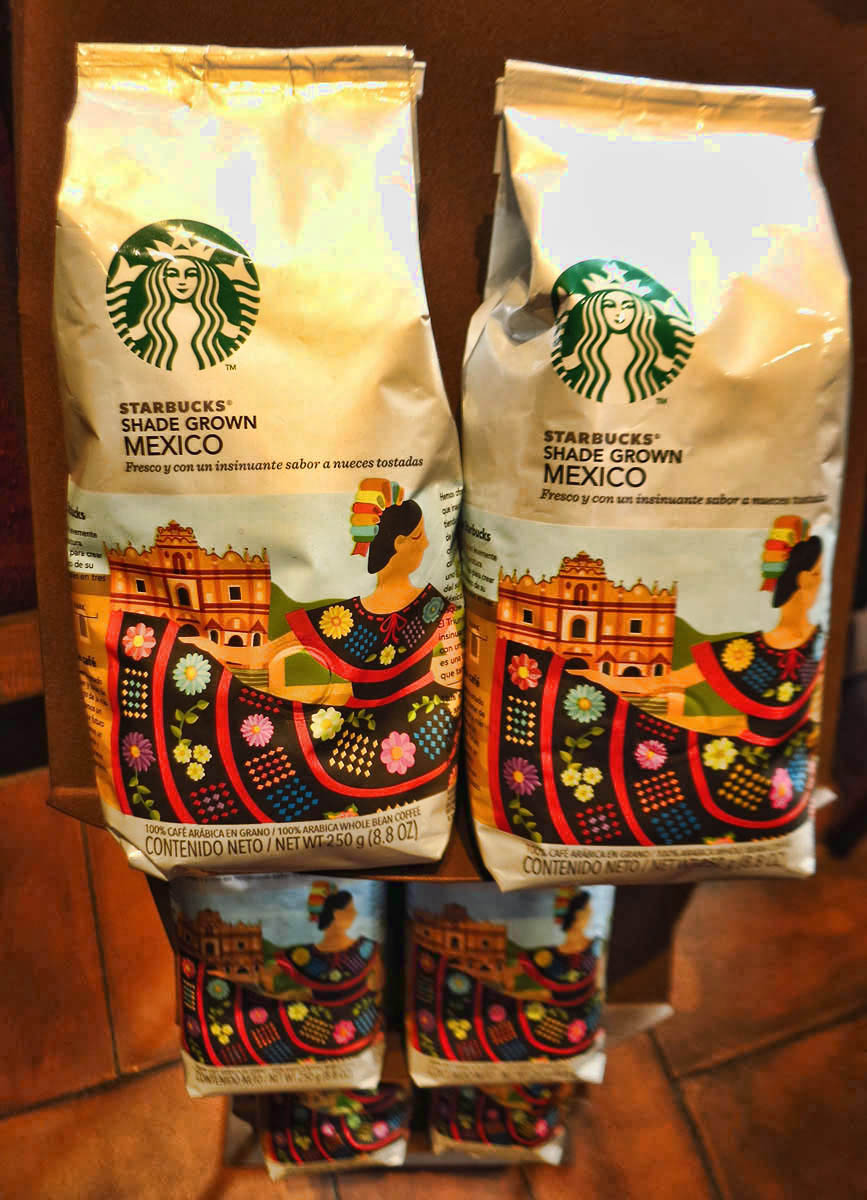 …in exchange for featuring Mexican coffee! 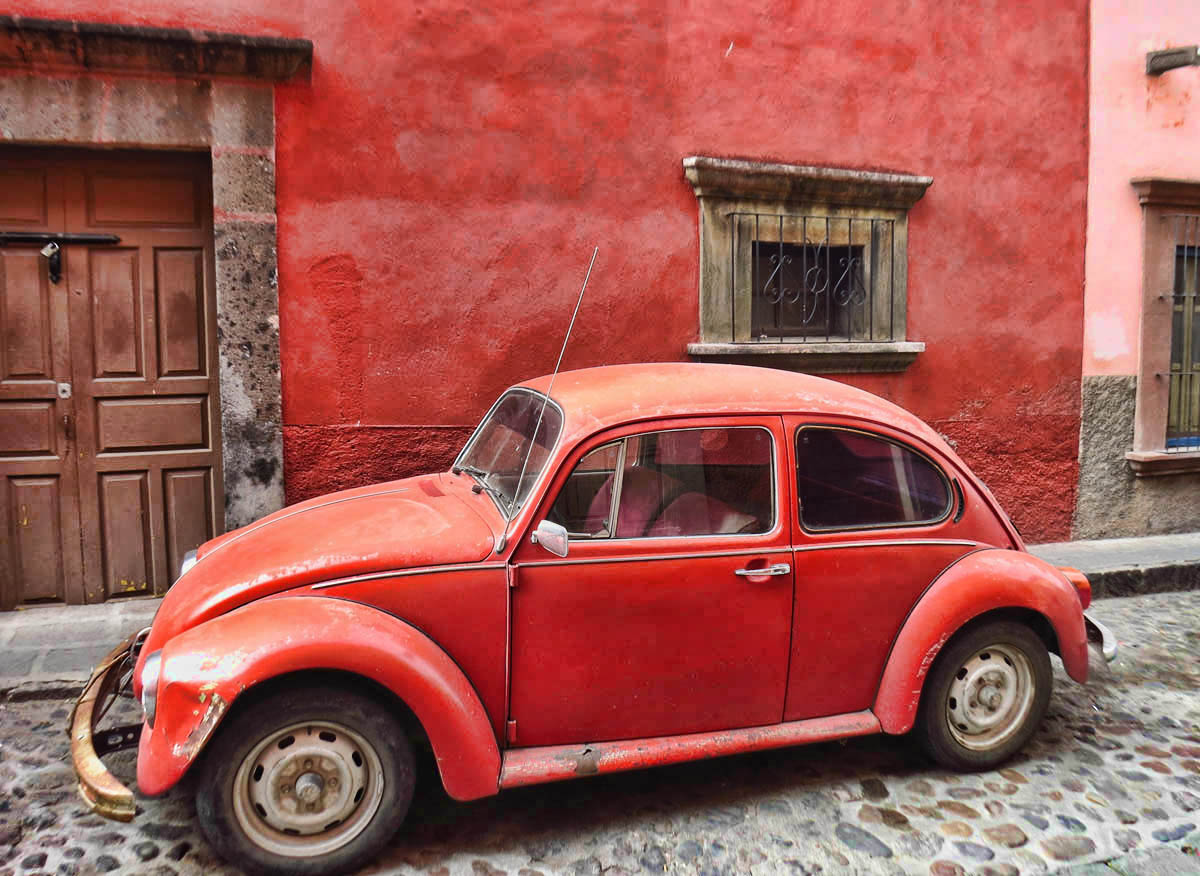 What has most changed about San Miguel since I was here last? Without a doubt, the prices. Due to the devaluation of the peso, some establishments are even beginning to display prices in USD. There are very few bargains left to be had in San Miguel. Two liter-sized Diet Cokes are 20 pesos, or about $1.35 US, around the same price you pay in the US. Beer is still a bargain, but as for mixed drinks like margaritas? I paid on average of 80 pesos, or around $5.50 for a small cocktail glass, good for what seemed like a buck per swallow. 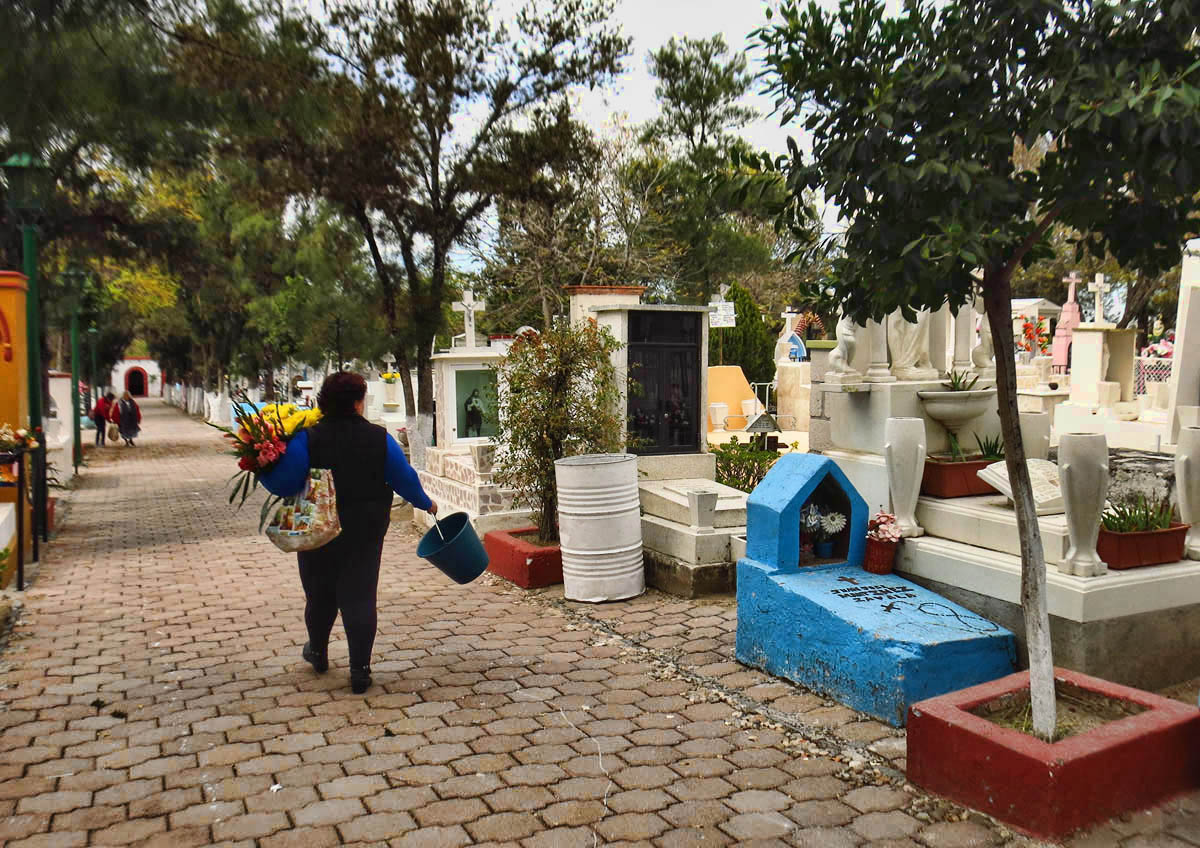 I explored a new (to me) cemetery this trip. It was huge! 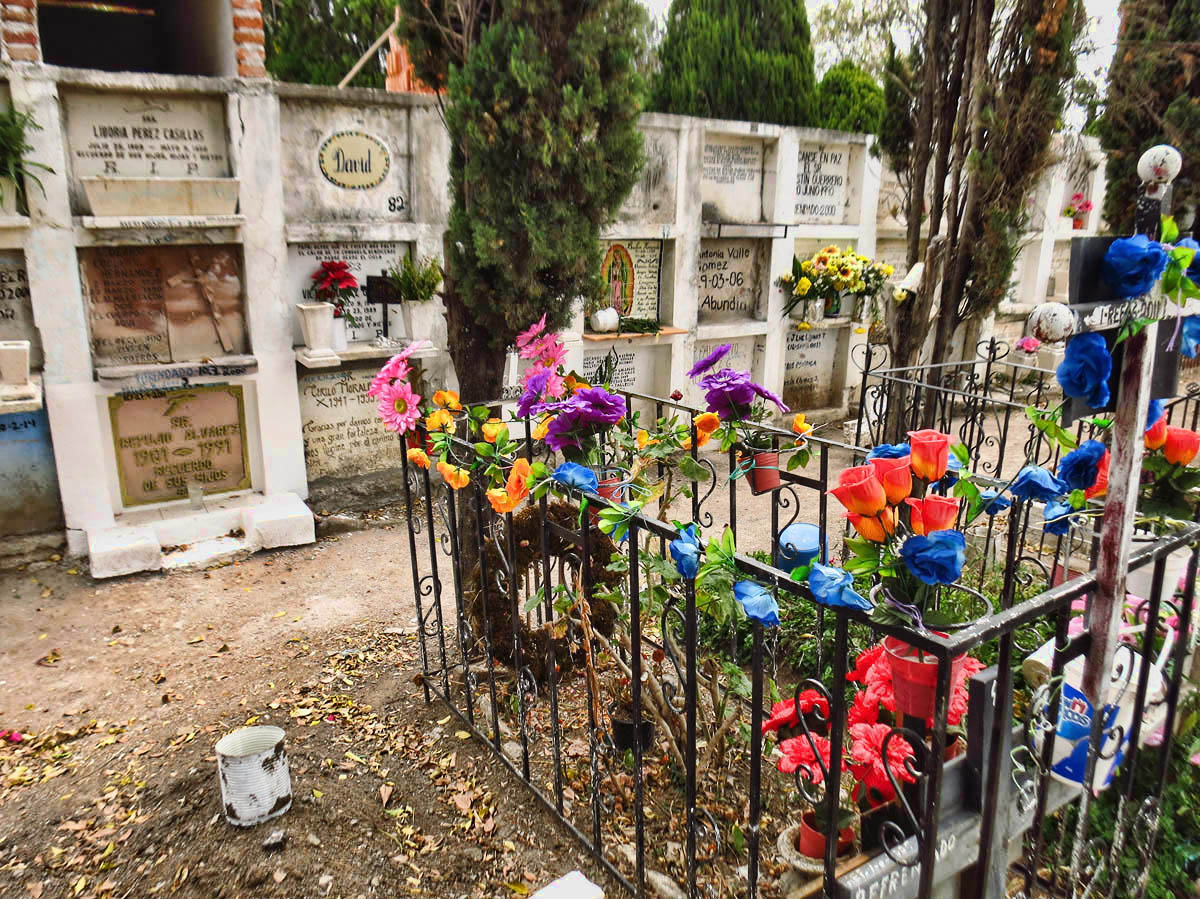 Both vertical as well as horizontal resting places. 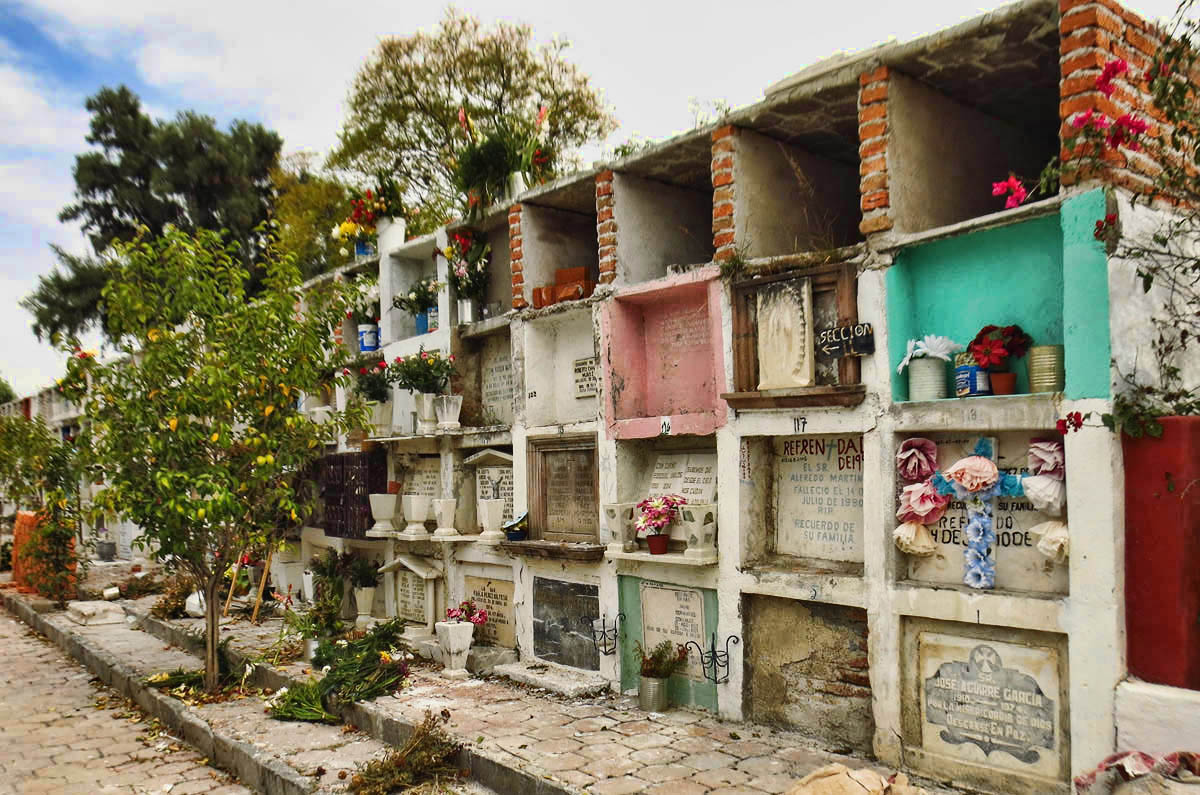 There’s still some space in the Condo made o’ stone-o. 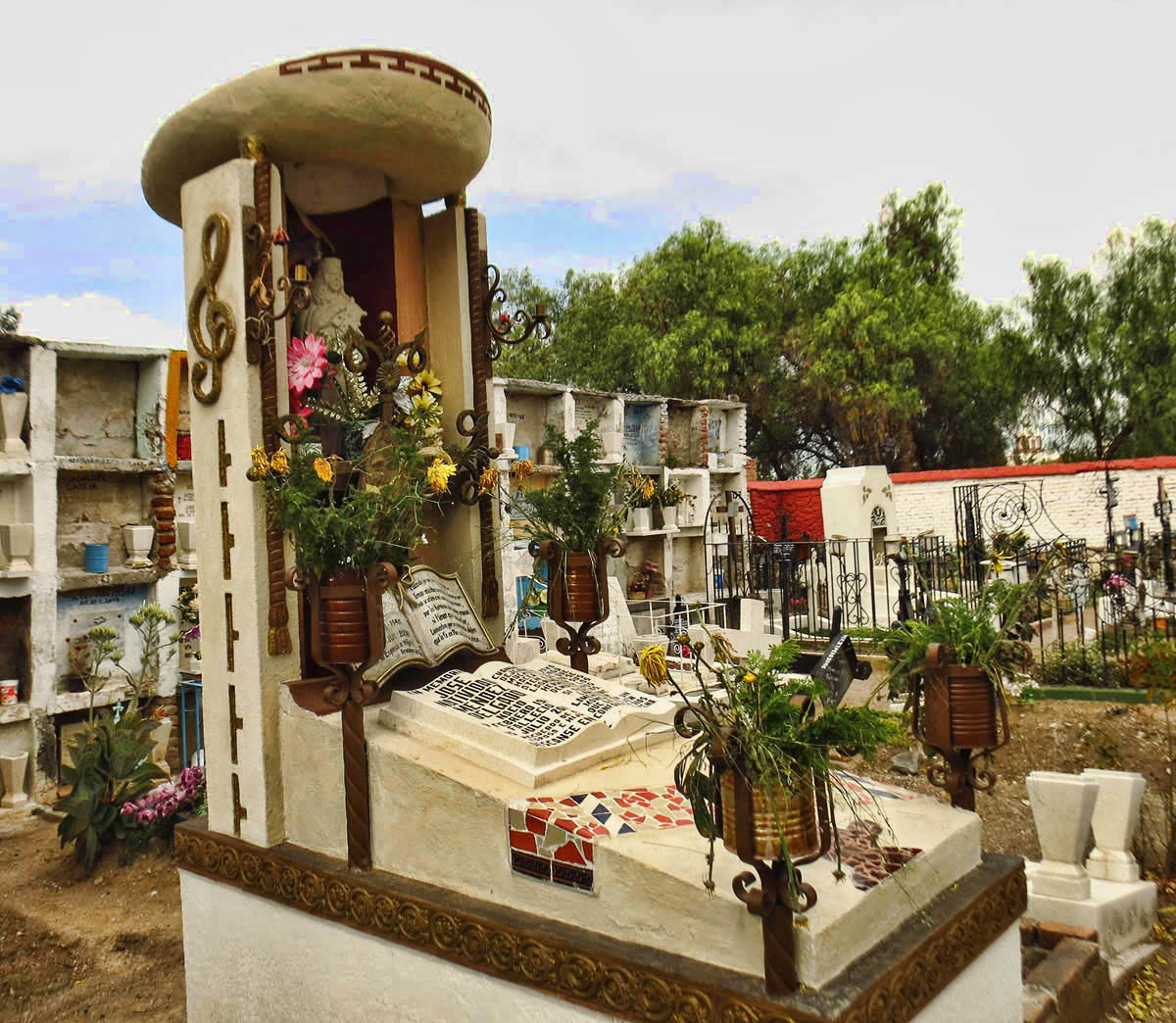 This guy must have been a famous Mariachi member. Much more festive than a granite marker, don’t you think?

I went to the new “La Burger,” billed as the best burger joint in Centro. The price for a burger was 165 pesos, about $11 in USD for a burger and fries. Had I not been nursing a hangover, in need of a good greasy cheeseburger as a cure, I would have walked out! Instead, I opted for the “Mini Burger” at the equivalent of $9 USD, with half the beef. And my “hair of the dog” Beer and Clamato was 50 pesos, no bargain for Mexico where cervezas used to be cheaper than bottled water. Those may not be New York prices yet, but they surely are Dallas prices! 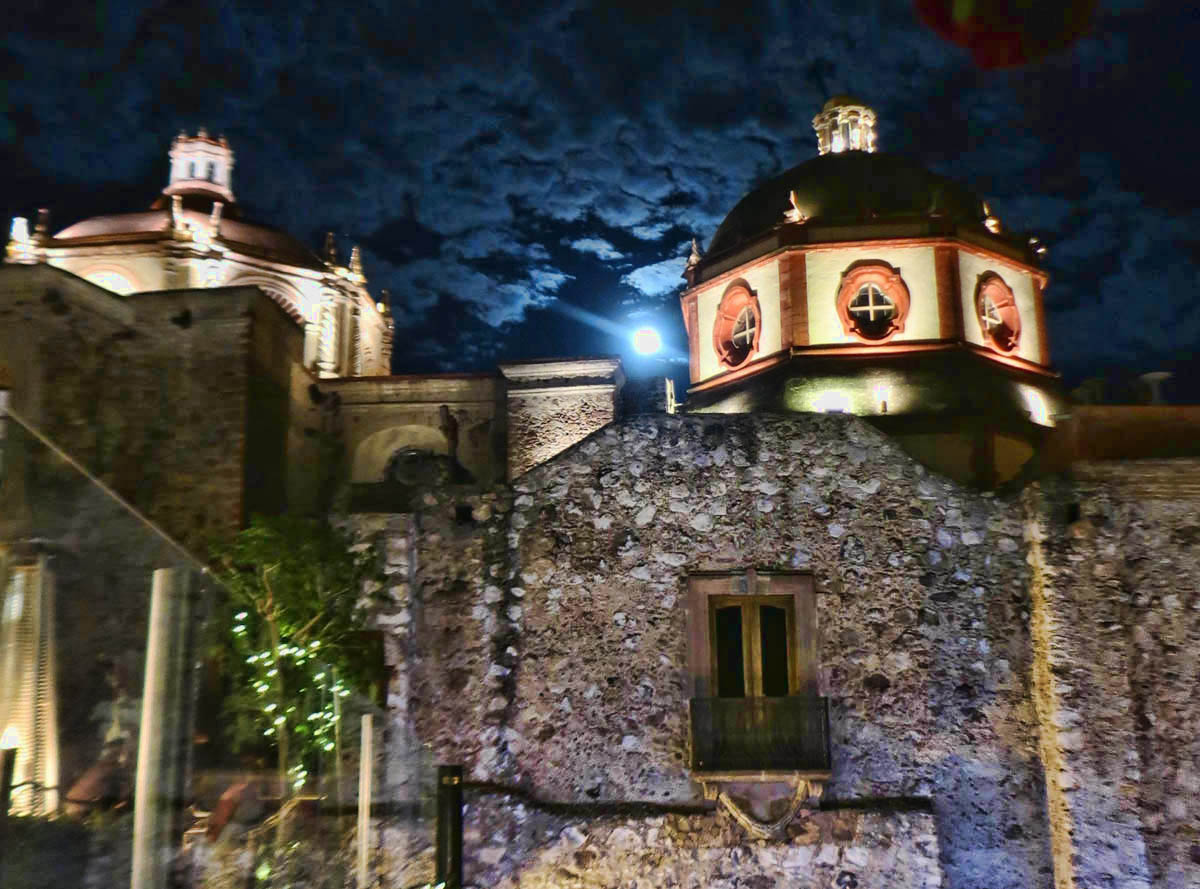 View from one of my favorite rooftop restaurants, La Posidita, in the moonlight. 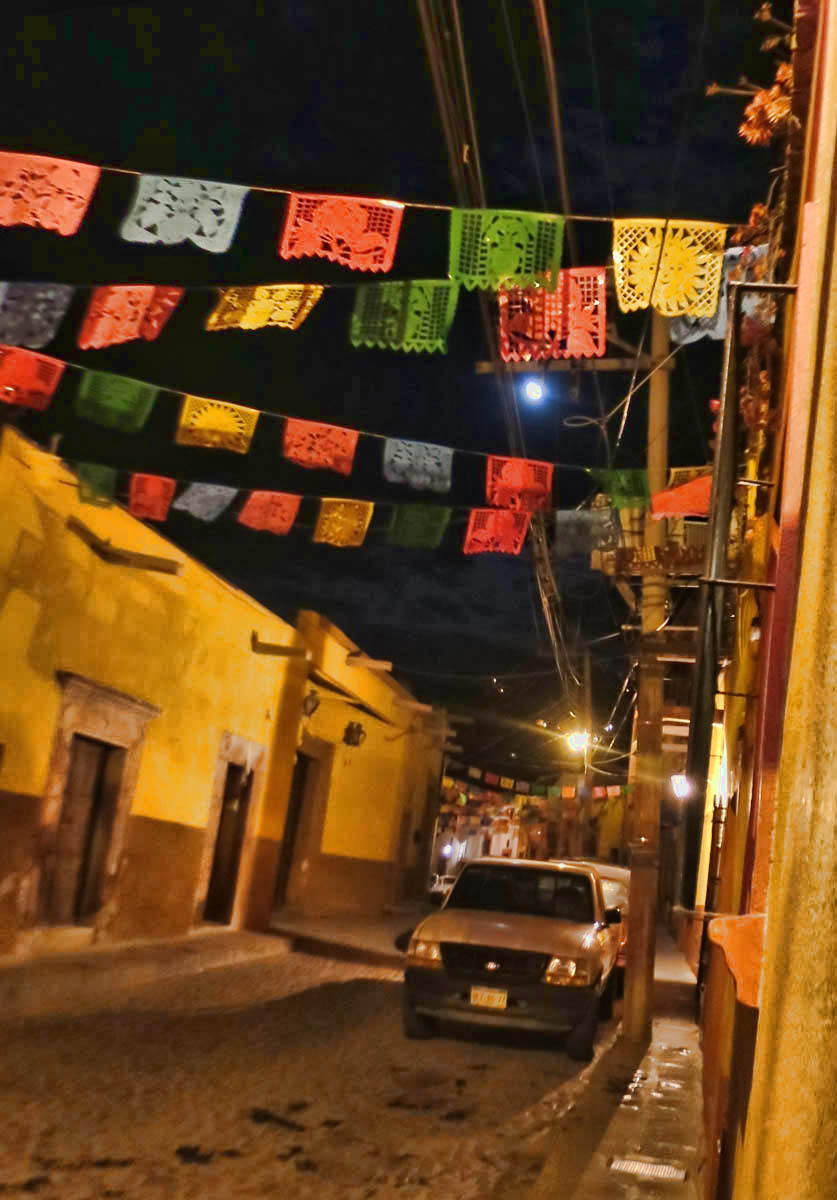 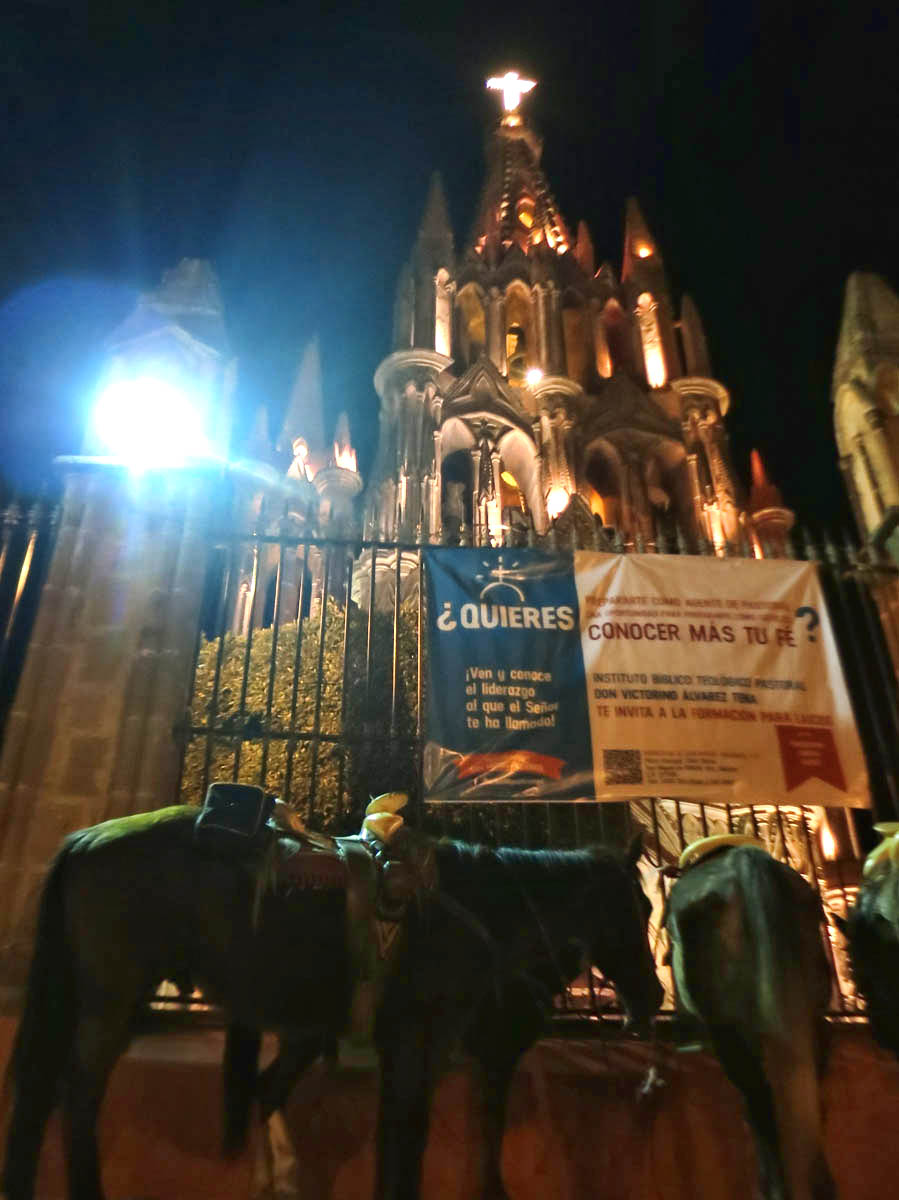 Don’t worry about traffic, just ride your horse to church!

Thank goodness there are still a few hold outs, like my favorite street taco stand….where you can get a juicy steak or pork taco with a sliver of pineapple, sprinkled onions and cilantro, hot off the grill for 10 pesos, less than a buck! Viva la Mexico street vendors! I’m glad some things never change…yet. 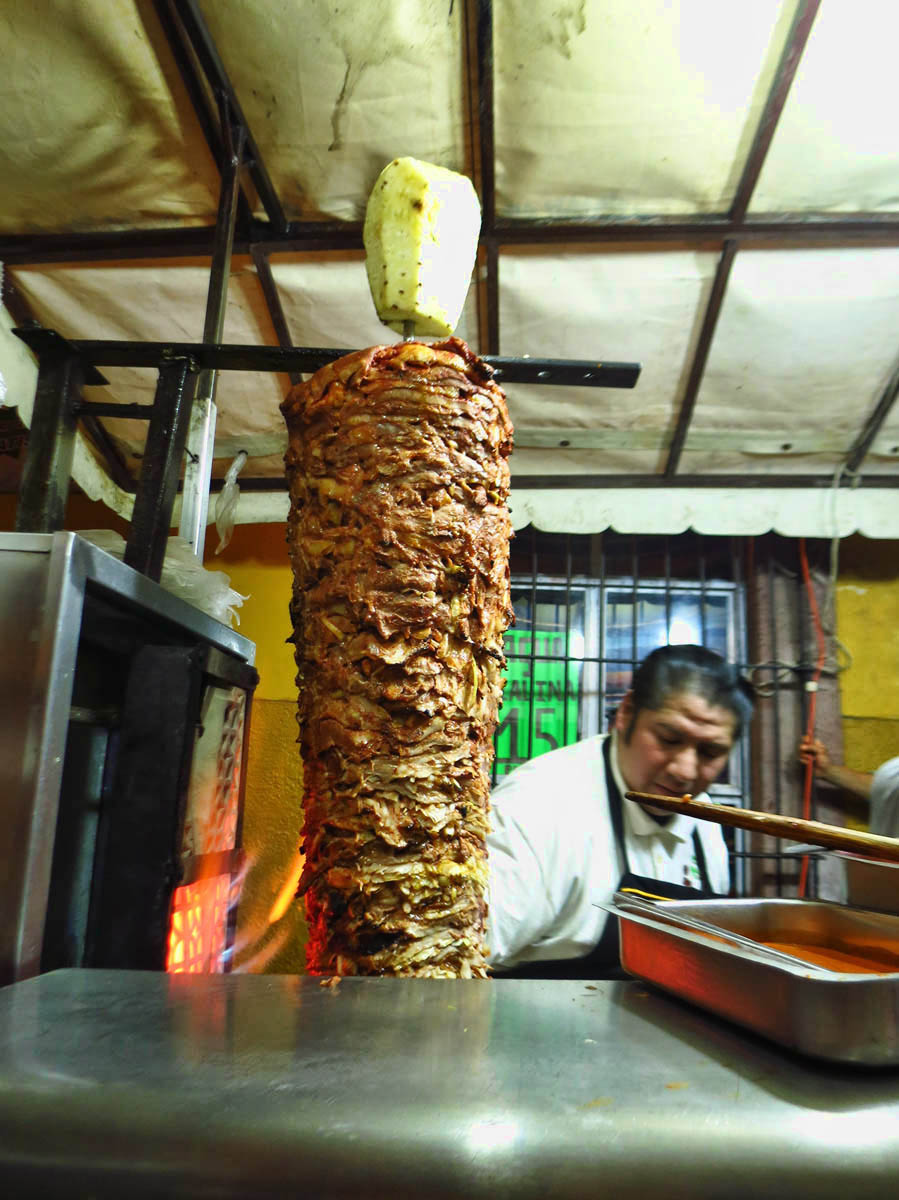 My favorite street taco stand on Insurgentes. Tacos al Pastor with a slice of that fresh pineapple overhead. SO yummy!

Join me on a walking tour of a few of my favorite San Miguel de Allende Fountains along “Ruta del Aqua.” 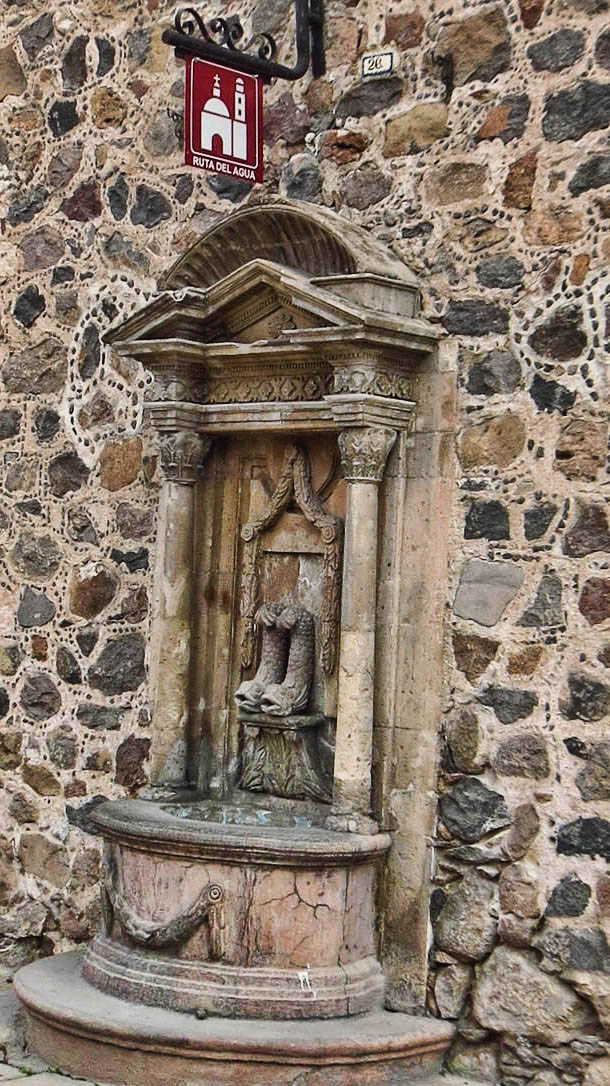 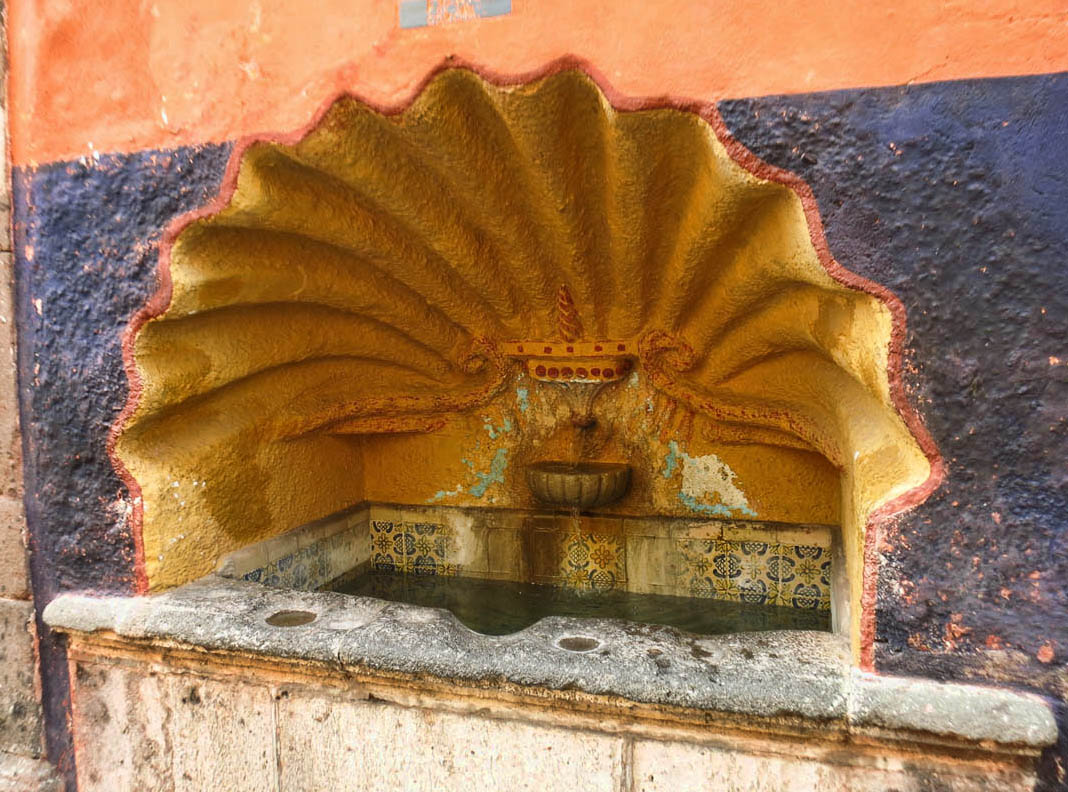 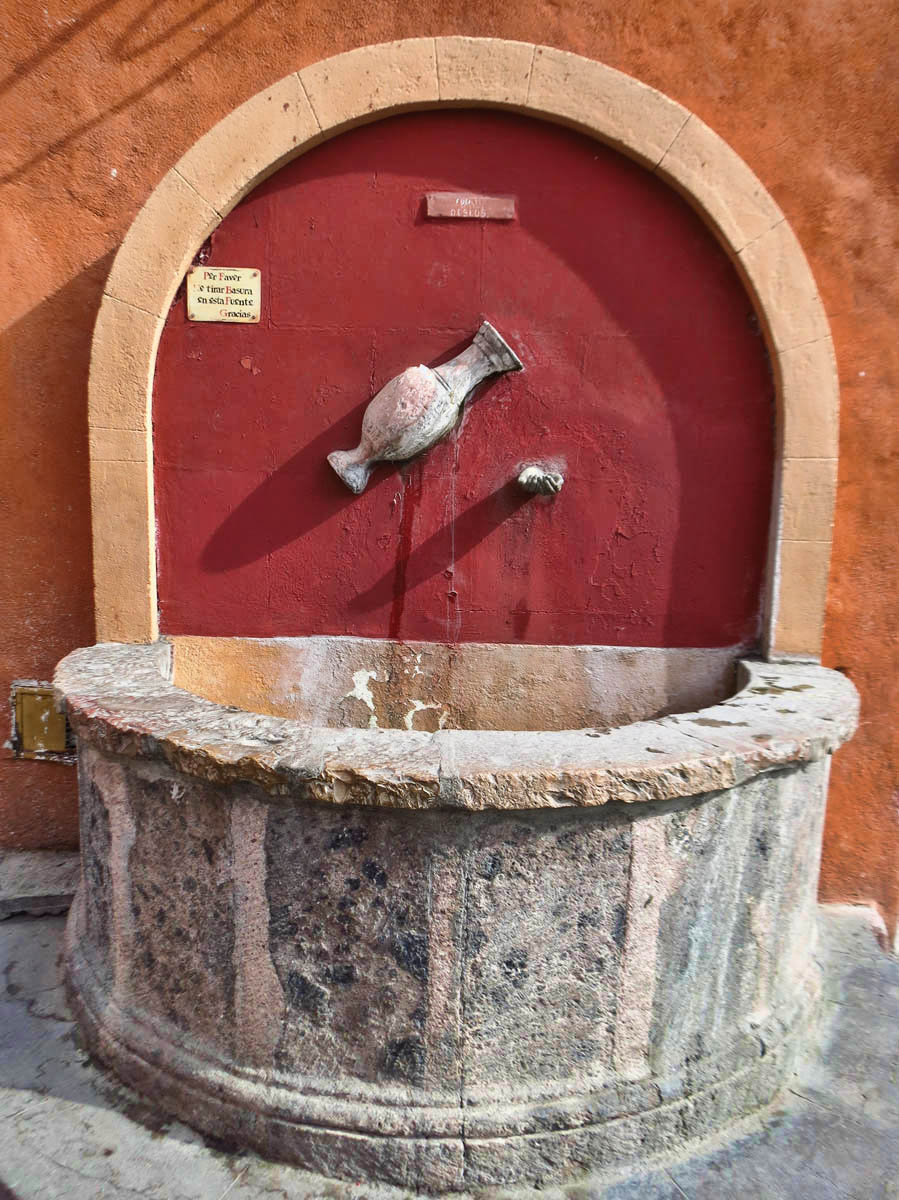