My long time friend Margie (not to be confused with “Marcia” in the last post)  lives in El Cajon, just outside of San Diego. I have known her for 24 years. Back in 1993 when I decided to change everything about my life, get myself out of a bad marriage, sell my house and car, and transfer from Texas to Manhattan for a new job, Margie was my first New York friend. I had accepted a transfer as National Account Manager for American Express. My client would be the United Nations, and I would have an office on the 19th floor of the Secretariat Building. A big leap for a farm girl from Texas.

As Implementation Manager, Margie’s job was to set the office up, hire the staff, and implement the contract. She did everything right down to picking out my office chair, and had it waiting for me. Margie taught me all the assimilation techniques a Texas transplant would need to survive in New York City, from where to buy snow boots, how to furnish an apartment the size of a mouse house, and to how to “blend” in a city of eight million people. “Lose the flowery print dresses, the brightly colored shoes, and the ‘Dallas hair.’ There are only four colors in a New Yorker’s wardrobe; black, white, khaki, and denim.”

Over the years, Margie became one of my best friends in Manhattan…until, that is, she moved to San Diego. We held similar positions in the company, always with heavy business travel. We would meet up whenever our schedules brought us to the same location, from Montreal to Miami. Now that I am retired, we don’t see each other as often, so I always make it a point to give her a shout when I am in the area.

This time, I had a favor to ask. Margie has a “side driveway” next to her beautiful home in the hills of El Cajon. I needed a change of scenery. Sitting on Pacific Beach in San Diego while listening to the bulldozers move the sand around had done little to satisfy my need for a beach fix. Still missing Mexico from not getting my annual trip over the holidays, Baja seemed like the perfect getaway. She graciously offered, “Stay as long as you like….well, until the house sells.” (The house is on the market, as Margie and husband Chris are moving to Portland. I put in my request that they look for another home with an extra long, level driveway.) 😉

So the plan is to park the Winnie in Margie’s driveway while I “hop on the bus, Gus” to Baja. Kudos to those with the cajones to drive their rigs in Mexico. I am not one of them. I know the stress of driving the narrow, winding roads, the fear of taking out my undercarriage on a “tope” (speed bump) or watching my diesel gauge threaten my check-engine light over lack of ULSD fuel would negate all the benefits of basking on the beach.

Last year when I decided I might like to try some backpacking again, I asked my brother Don to ship my old Gregory Lassen backpack. I hadn’t laid eyes on it since my round the world backpacking trip in the year that followed 9/11.  When I opened the box, it smelled like a 14 year old footlocker. But it was my “home” for a year, and I still love it, grease stains, road dirt, mildew and all. Packing it again was a walk down memory lane, reminiscing about the systematic packing job I had to do to hold everything I would need for a year. Like getting acquainted with an old friend again after 14 years.

Margie dropped me off at the Tijuana Trolley in Old Town, where I would ride to San Ysidro, walk across the border to Tijuana, and catch the bus bound for Baja. I quickly realized it would take some time to reconnect and become “one with the pack.” Although I can hike 14 miles with little effort, I have the arm strength of an ant, so when I went to lift it with one hand, the inertia snapped me back so fast I almost got whiplash. Having grown accustomed to a much lighter pack while hiking, I had forgotten how one’s center of gravity shifts. As I sat down on the concrete bench to wait for the trolley, I almost fell backward, knees flying up in the air before I caught myself from “turning turtle.”

I struggled with the automated ticket machine, a cross between an ATM and a touch pad, that seemed to spit my dollar bills back at me like a four year old’s tongue sticking out mocking an old lady…that “old lady” now being me.  I stood on the track for the wrong train until a man approached. “I think by your backpack, you may be waiting on the wrong platform.”

But I am determined to find a beach in Baja. On a bus. With a backpack. I feel as rusty as my old backpack smells musty, now loaded with shorts and swimsuits, gadgets and gear. It will take me some time to get back on my game… 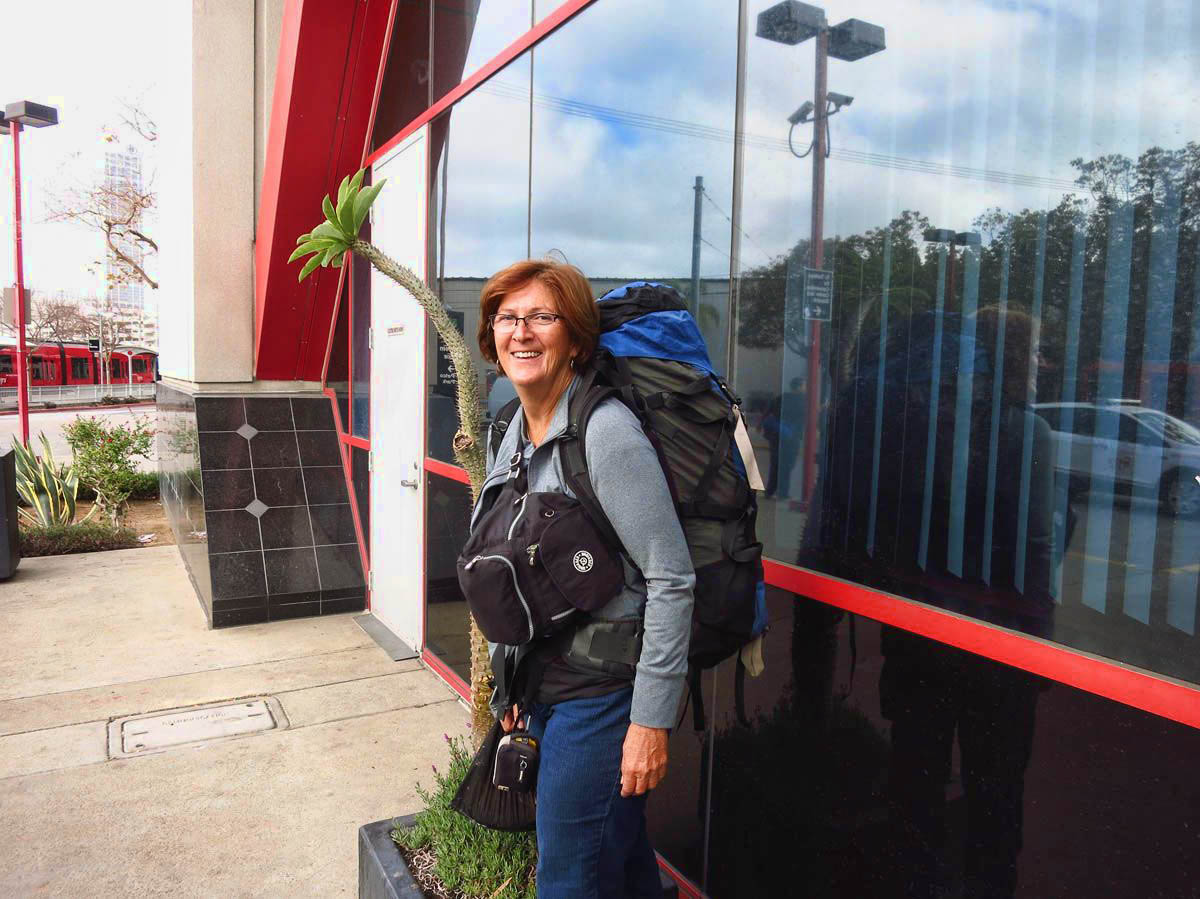 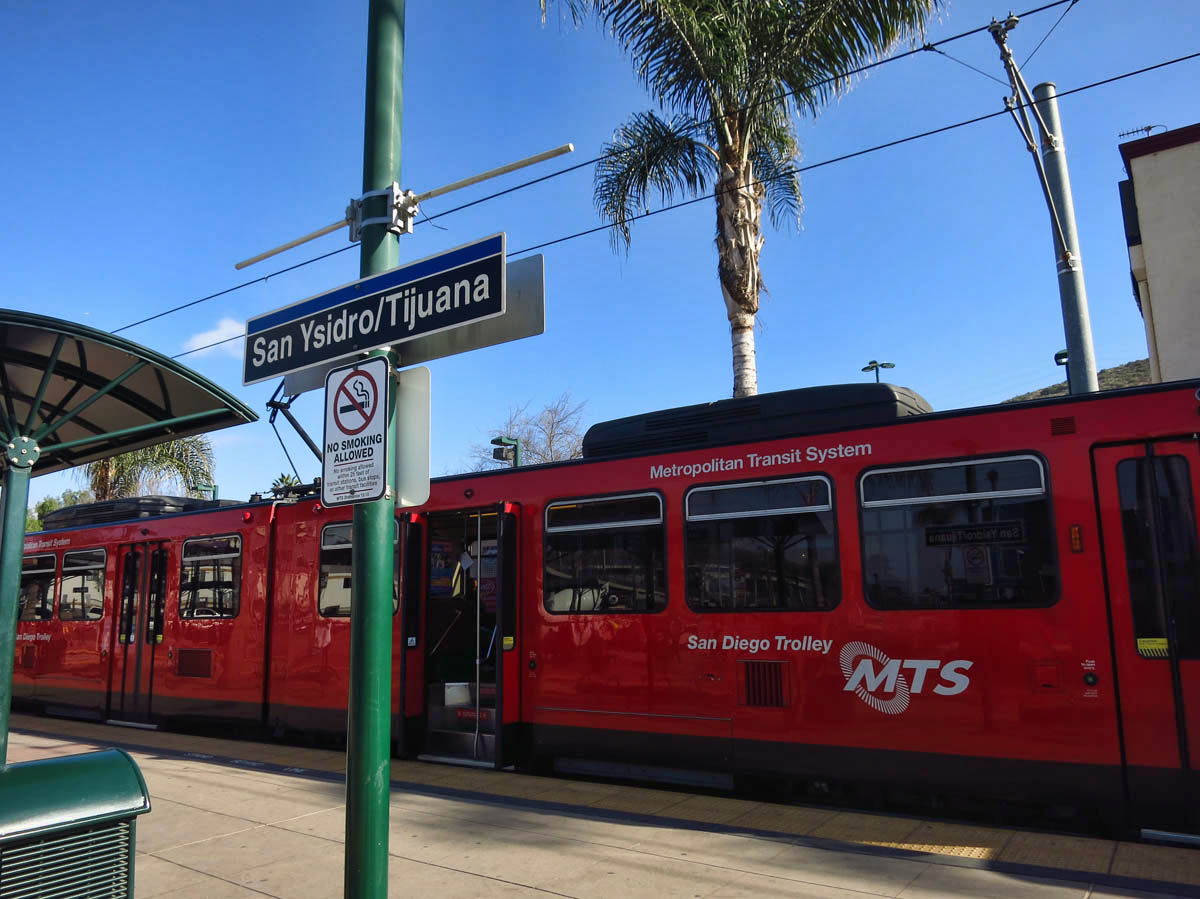 I never expected the “Tijuana Trolley” to be quite this modern. 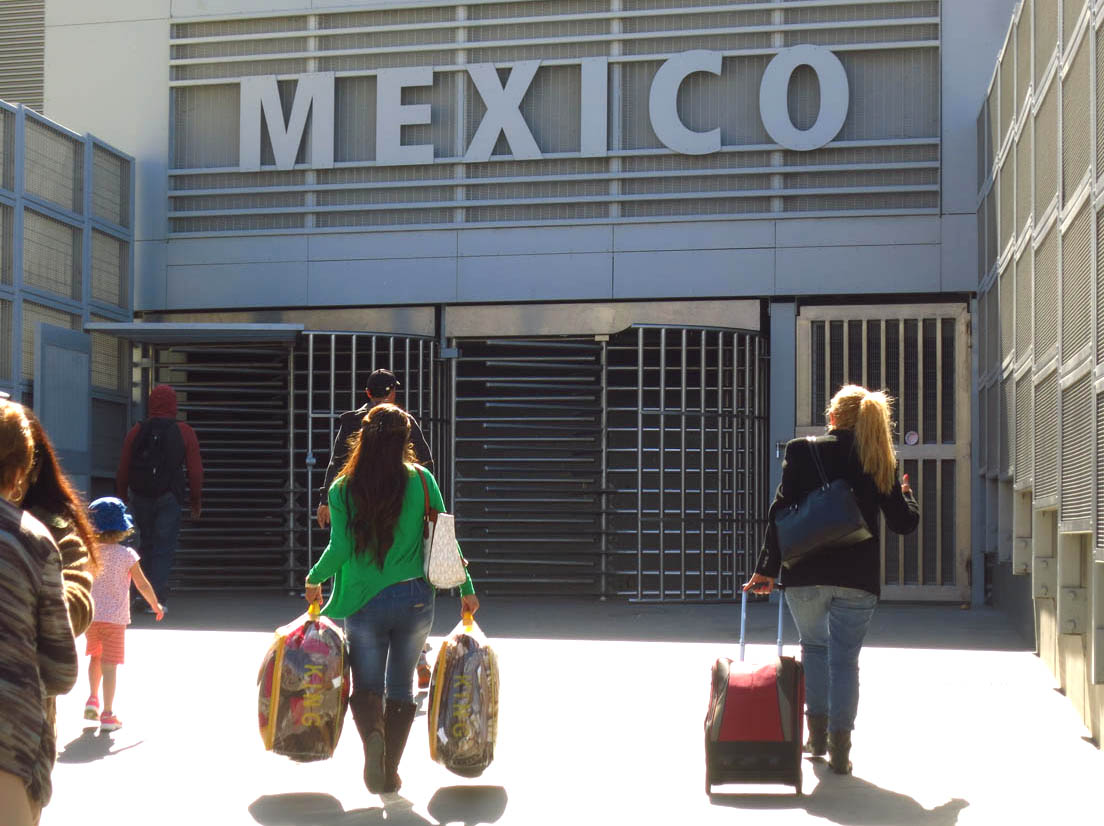 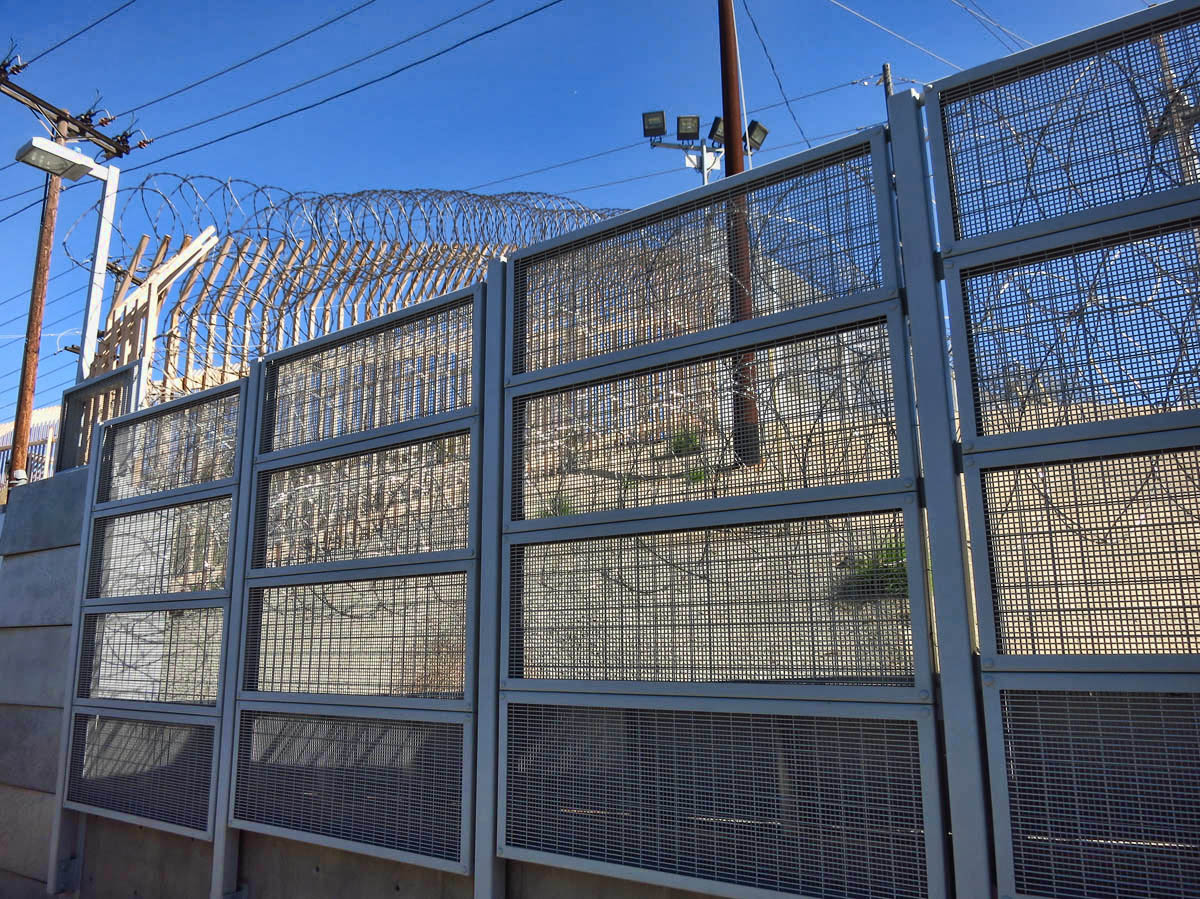 Wonder who paid for it? 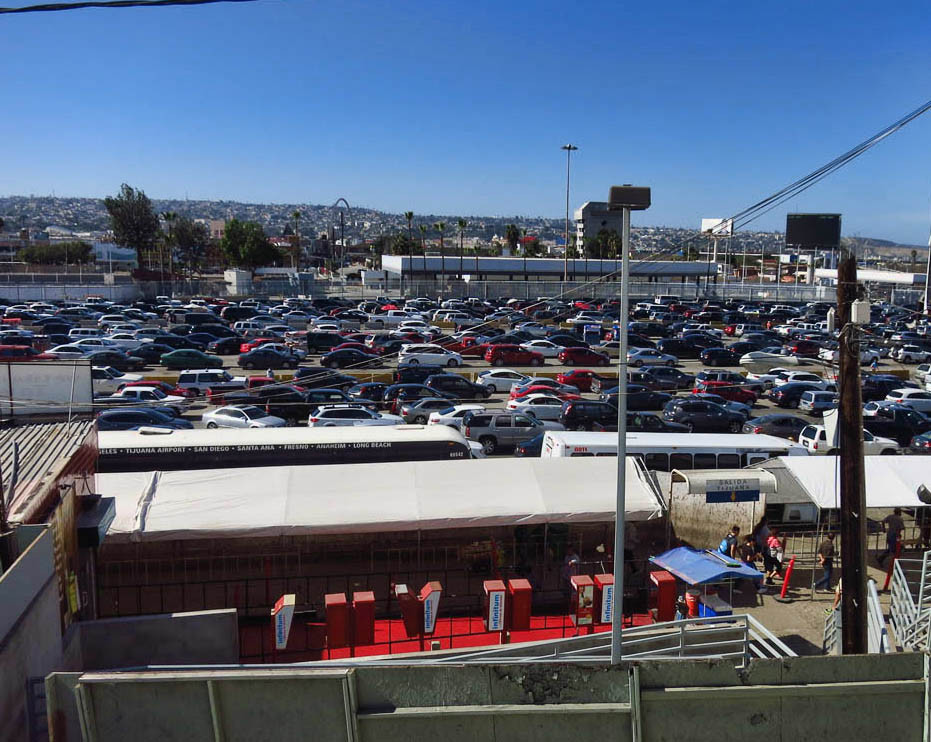 These lines of cars are waiting to cross back over the border from Tijuana. 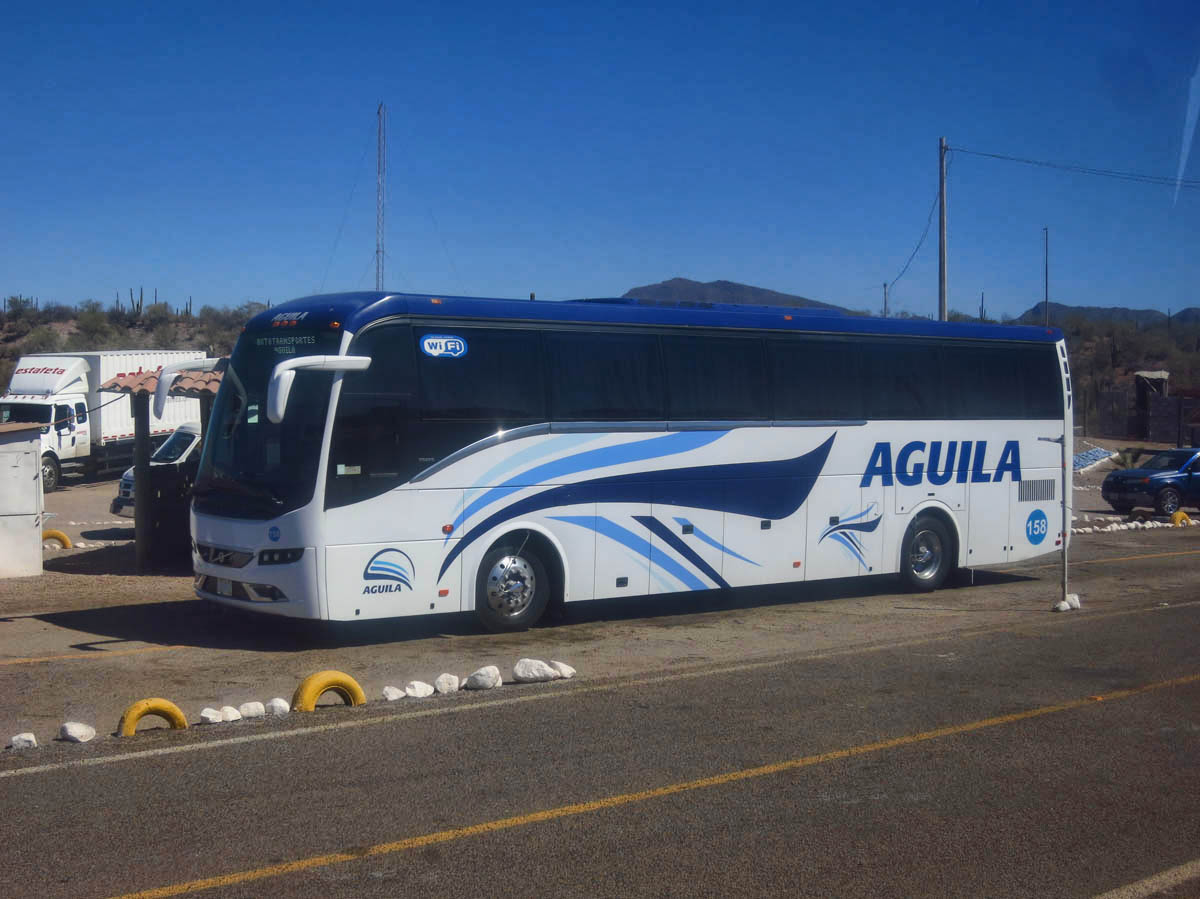 There are two bus lines that cover Baja — ABC, and Aguila, which seems a little nicer. Gotta love that “WiFi” sign in the driver’s window! It really works! 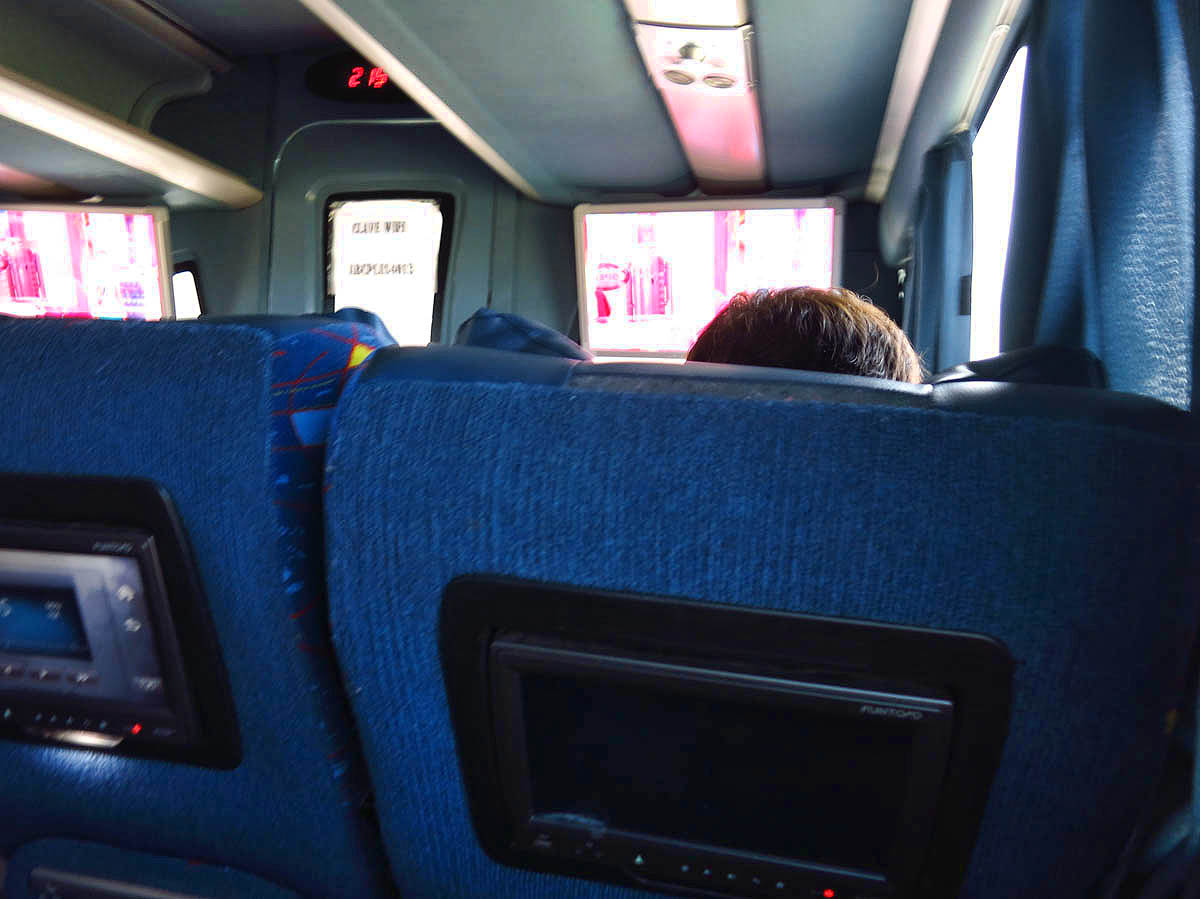 Mexican buses are getting fancier with TV screens in the seat backs now. 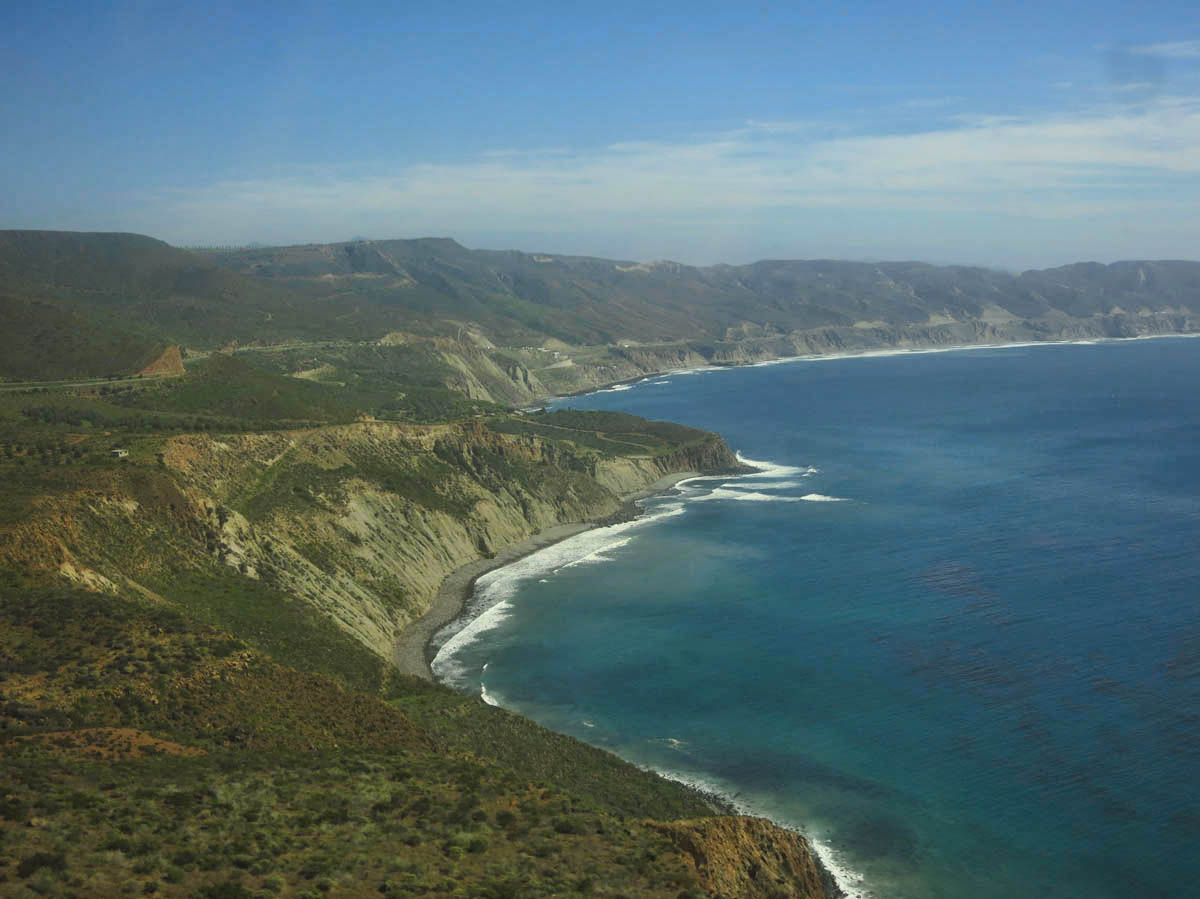 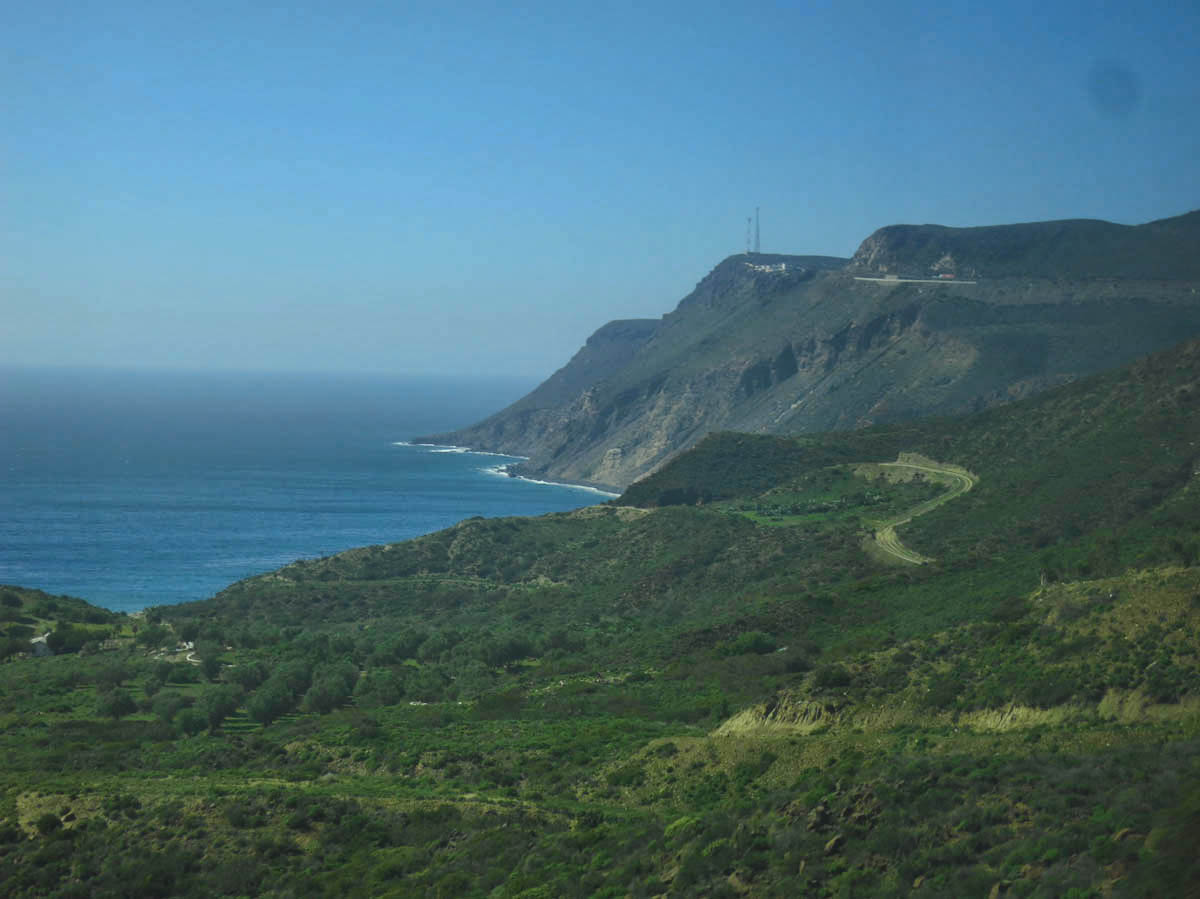 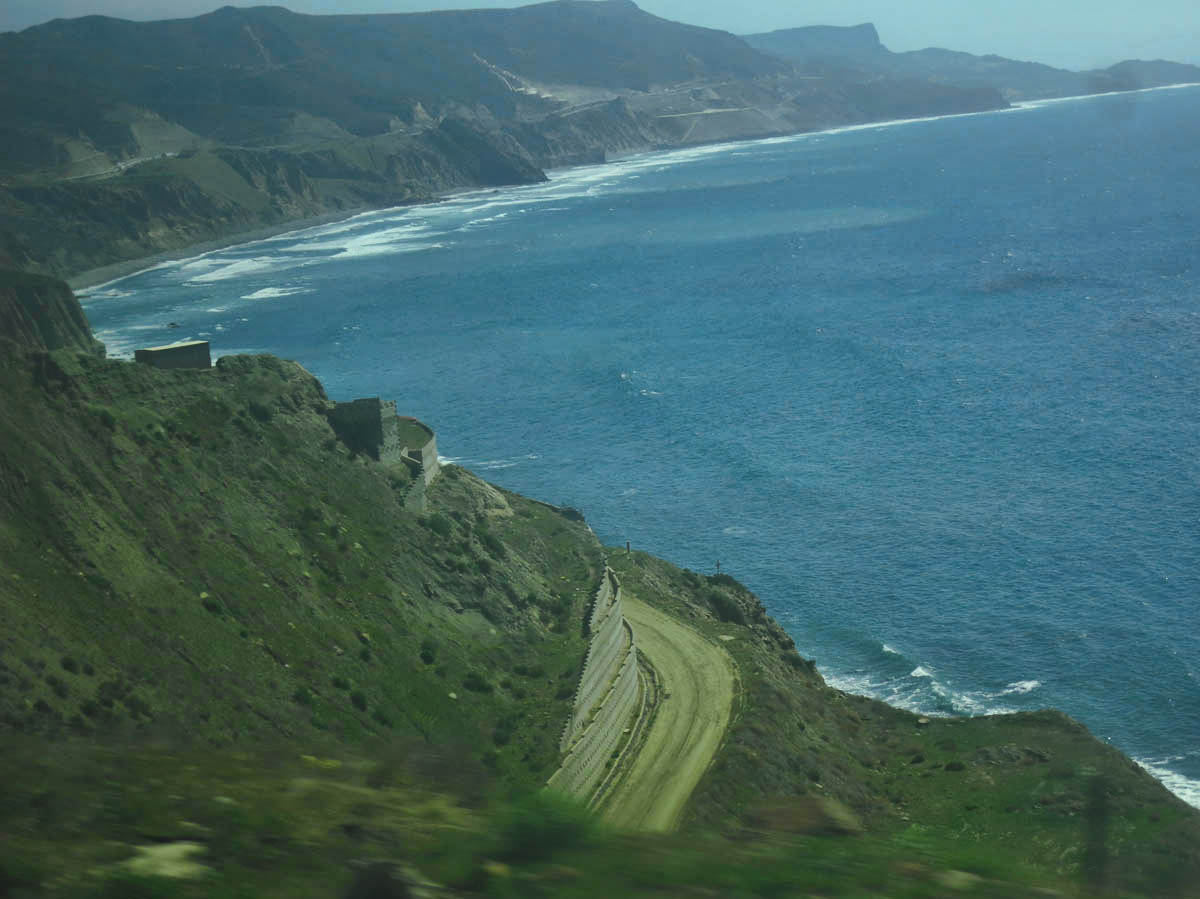 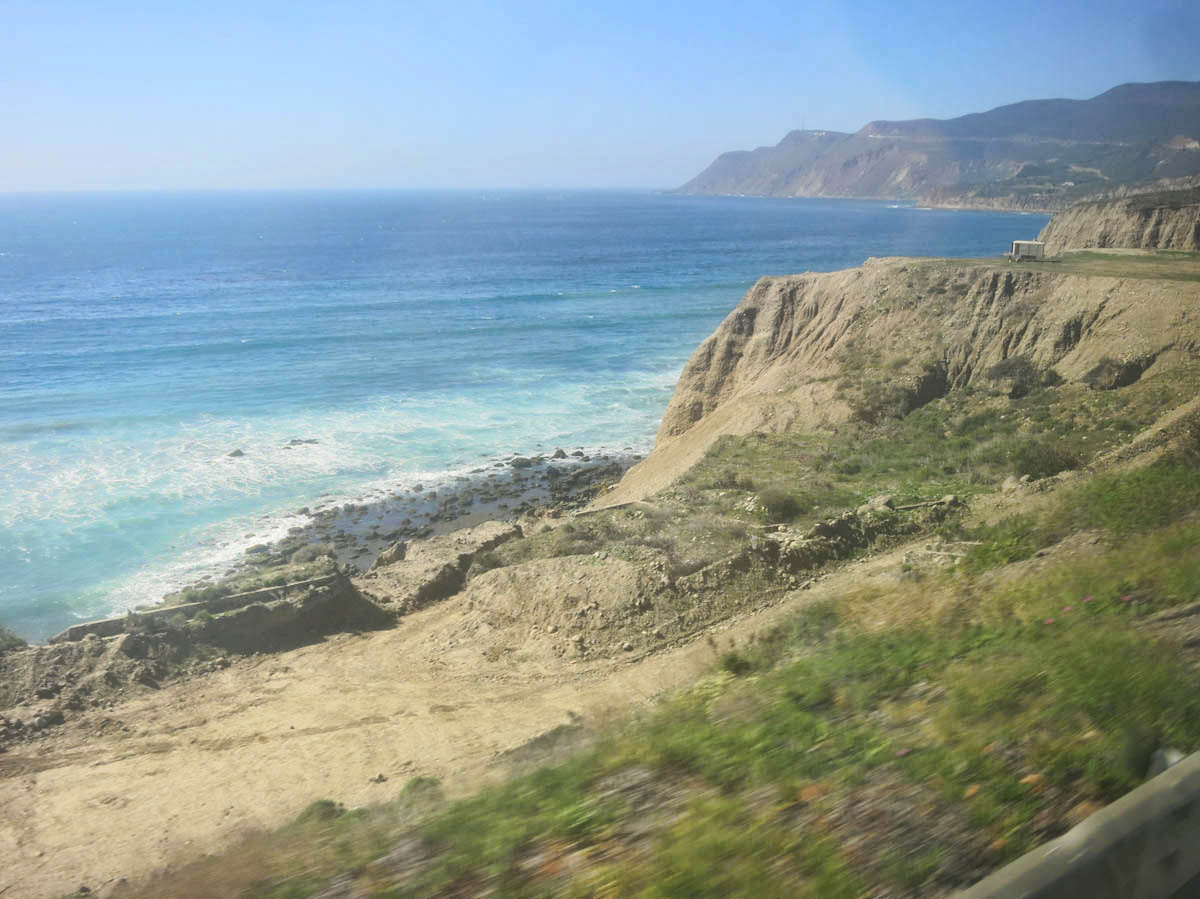 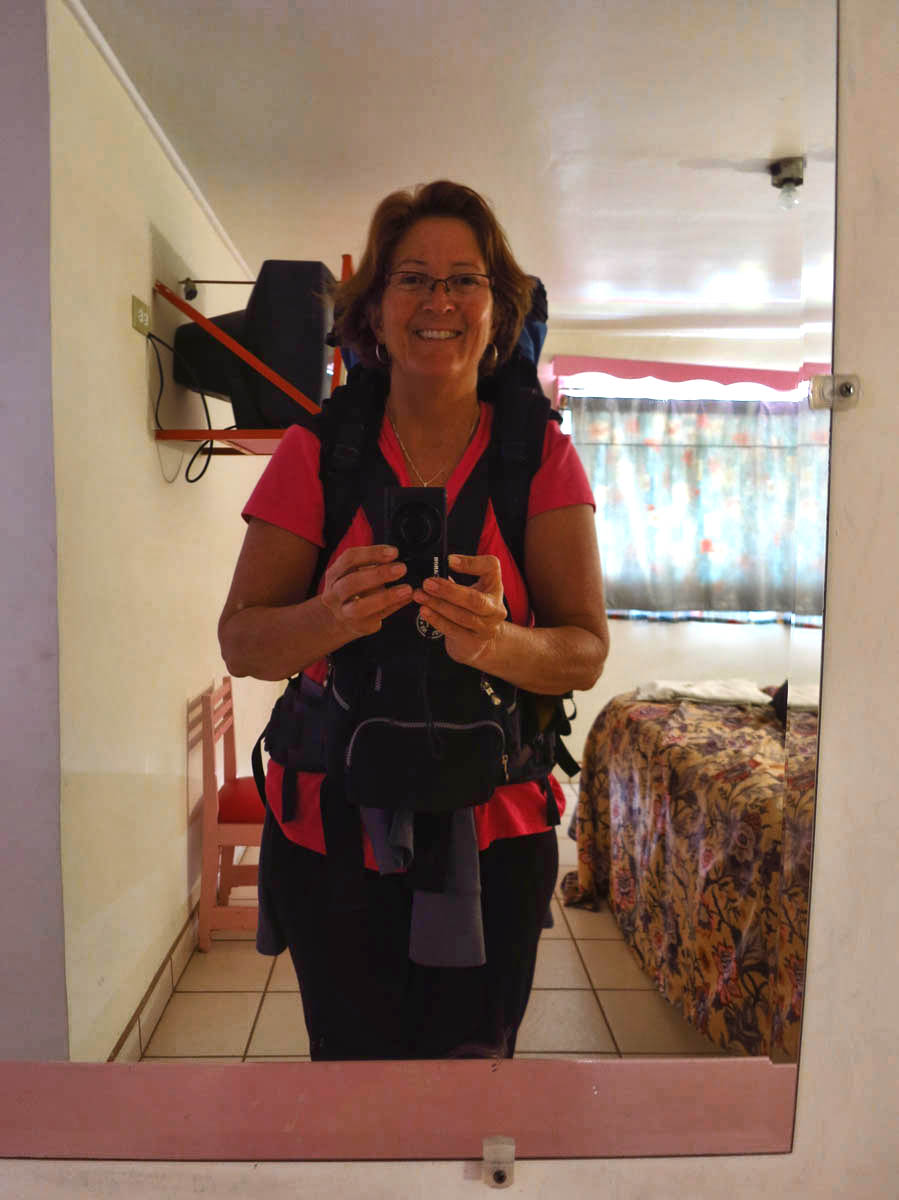 Here’s the set-up. Small daypack goes in front to hold money, maps, guidebook, camera. Large backpack goes over to secure it in place.

15 thoughts on “The Bus, The Backpack, and The Baja”